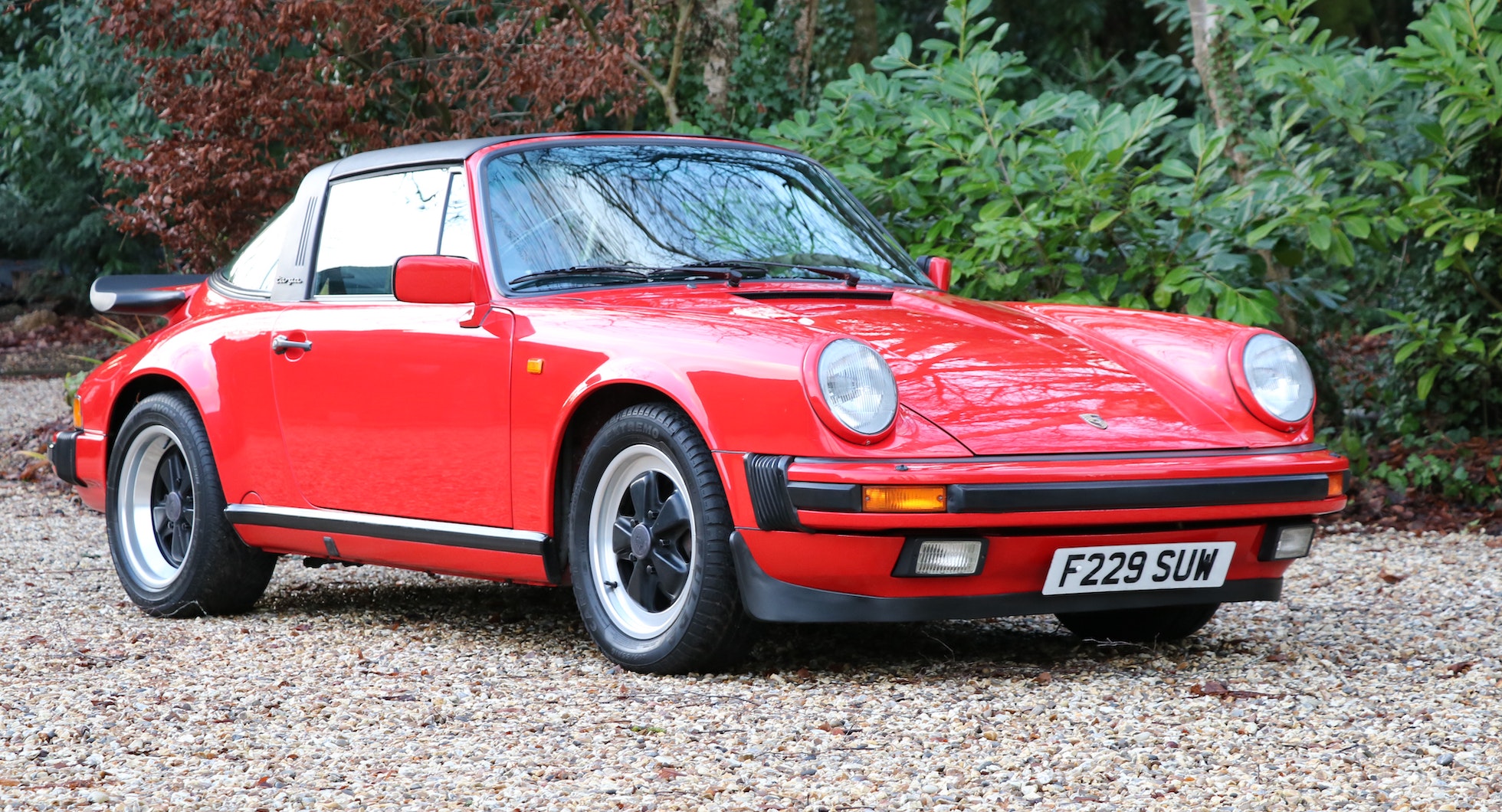 This 1989 Porsche 911 Carrera 3.2 Targa Sport is a wonderful modern classic presented in superb condition, and in a perennially popular colour scheme. It is powered by the 228bhp 3.2-litre air-cooled flat-six engine, driven through the rear wheels via the desirable five-speed Getrag G50 manual transmission. The odometer indicates 107,503 miles from new, which is fully supported by the extensive service history. 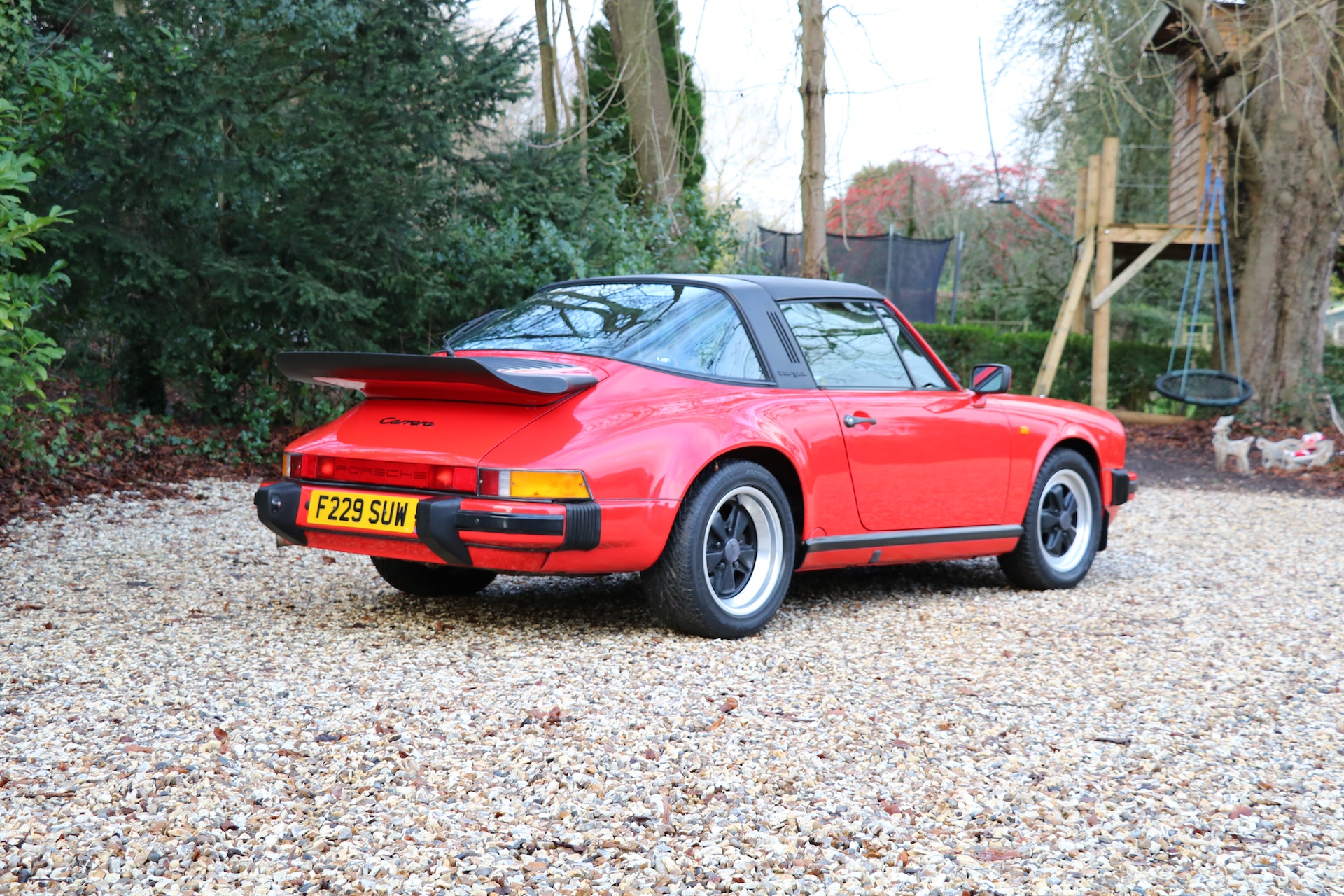 An original right-hand drive C16-code UK car, this 911 was specified new with the factory-fitted ‘Sport’ package, comprising upgraded Bilstein shock absorbers, sport seats, a black lip spoiler at the front and the ‘whale tail’ spoiler at the rear. This car was delivered and first registered on 18 April 1989, supplied new through Lancaster Garages in Colchester. It has been owned by the vendor for the last seven years, who has enjoyed some 4,000 miles behind the wheel. 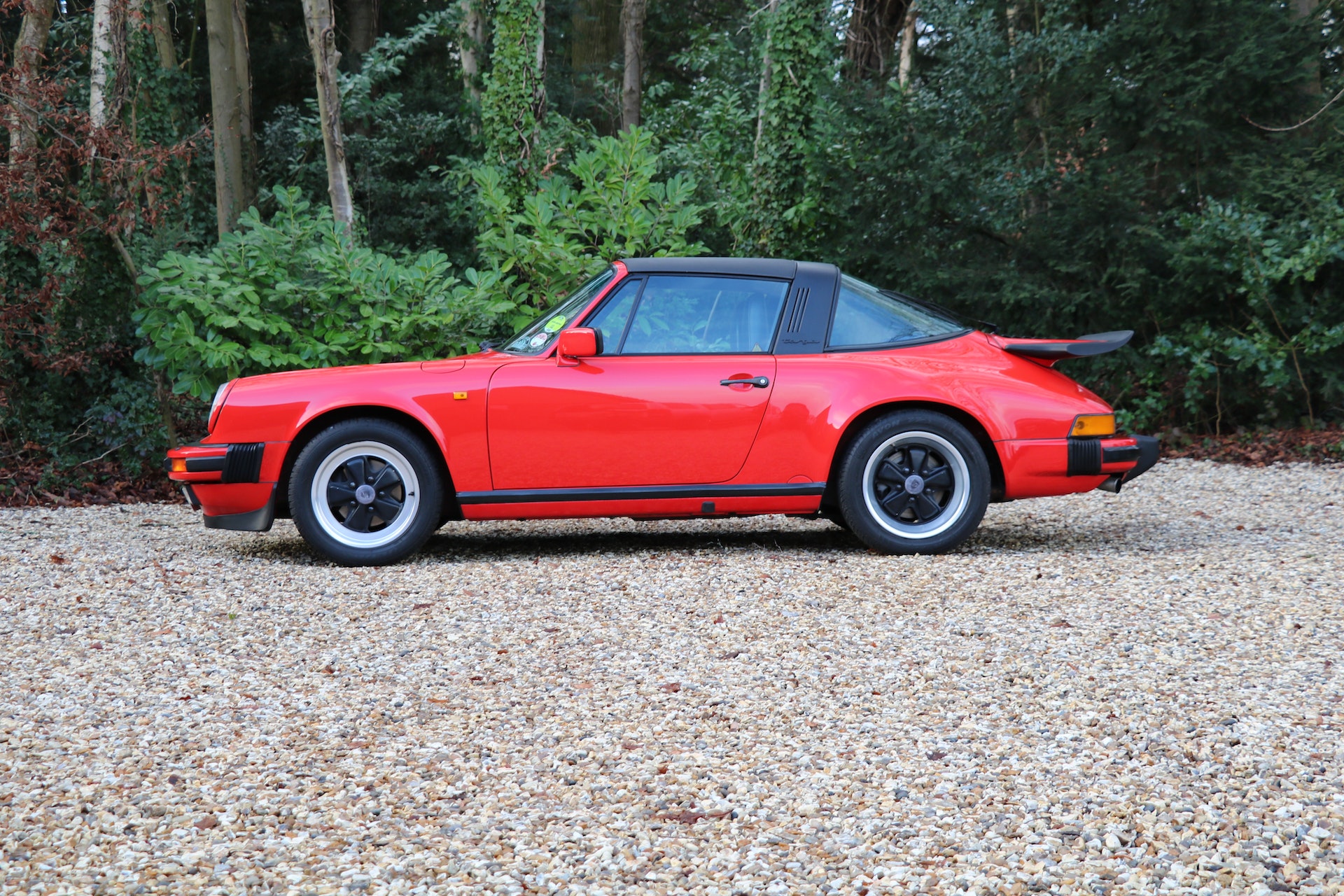 Although there is no documentation, the car is believed to have had a complete re-shell earlier in its life. Whilst the chassis stamping in the front compartment corresponds to the chassis number of the cars V5 documents, the style and format of the stamping itself do not appear to be factory original. The current owner has inspected the car thoroughly and found no signs of any incorrect welding, and so believes this was a new body-in-white supplied direct from the factory.

The bodywork of this Carrera 3.2 is consequently in superb condition, with consistent panel gaps all round. The paintwork has almost certainly been refreshed given its bright and glossy appearance. There are some minor stone chips on the wing mirrors, and a very small patch of paint blistering on one corner of the engine lid, but otherwise the Guards Red finish looks terrific all around the car. 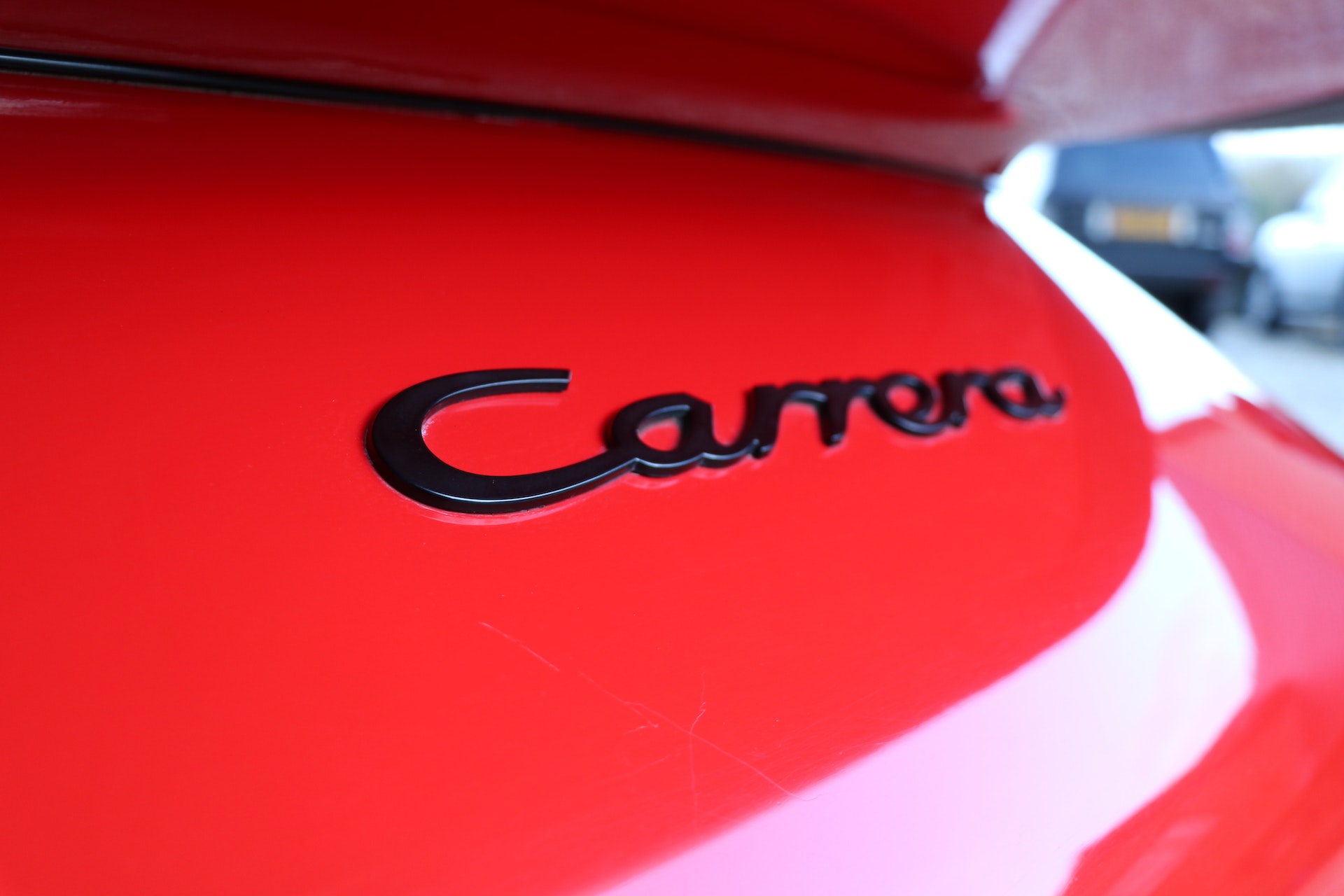 Light lenses are all present and correct with no damage, and the rear reflector is also in good order. All of the black rubber and plastic trims are in great shape, including the window seals and rear spoiler surround. The door jambs and panel shuts also present well, and new struts were fitted under the bonnet and engine lid in 2009 at 102,225 miles. 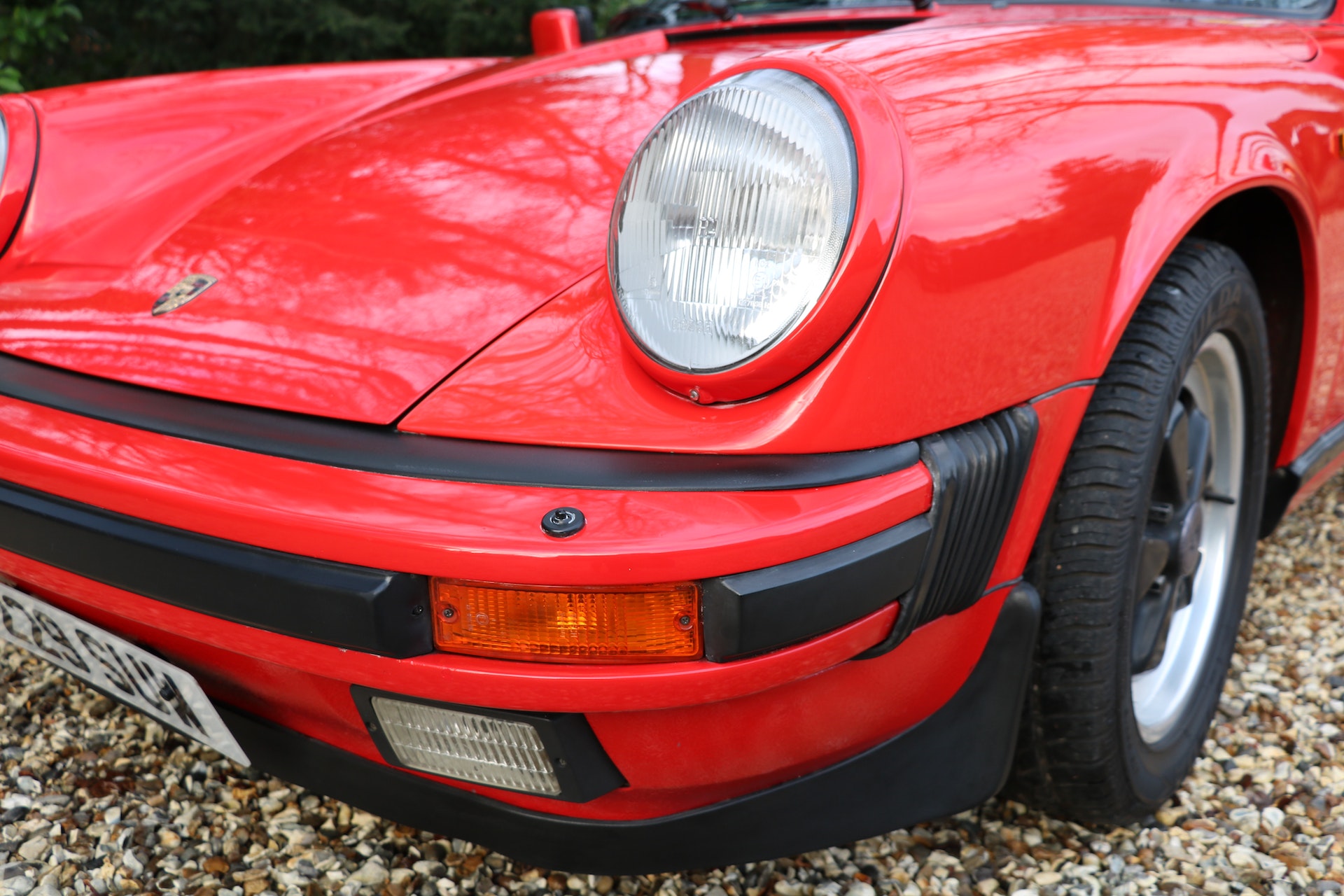 In April 2010, a Targa top restoration kit was supplied by Design911, which included a new deep grain vinyl roof skin, foam backed nylon headlining, woven linen backing cloth and new insulation material. As such, it presents in as-new condition today. The car sits on a set of correct 16-inch Fuchs alloy wheels with silver rims and satin black centres. There is minor kerbing damage on the nearside front wheel, but they are otherwise all in very good order. 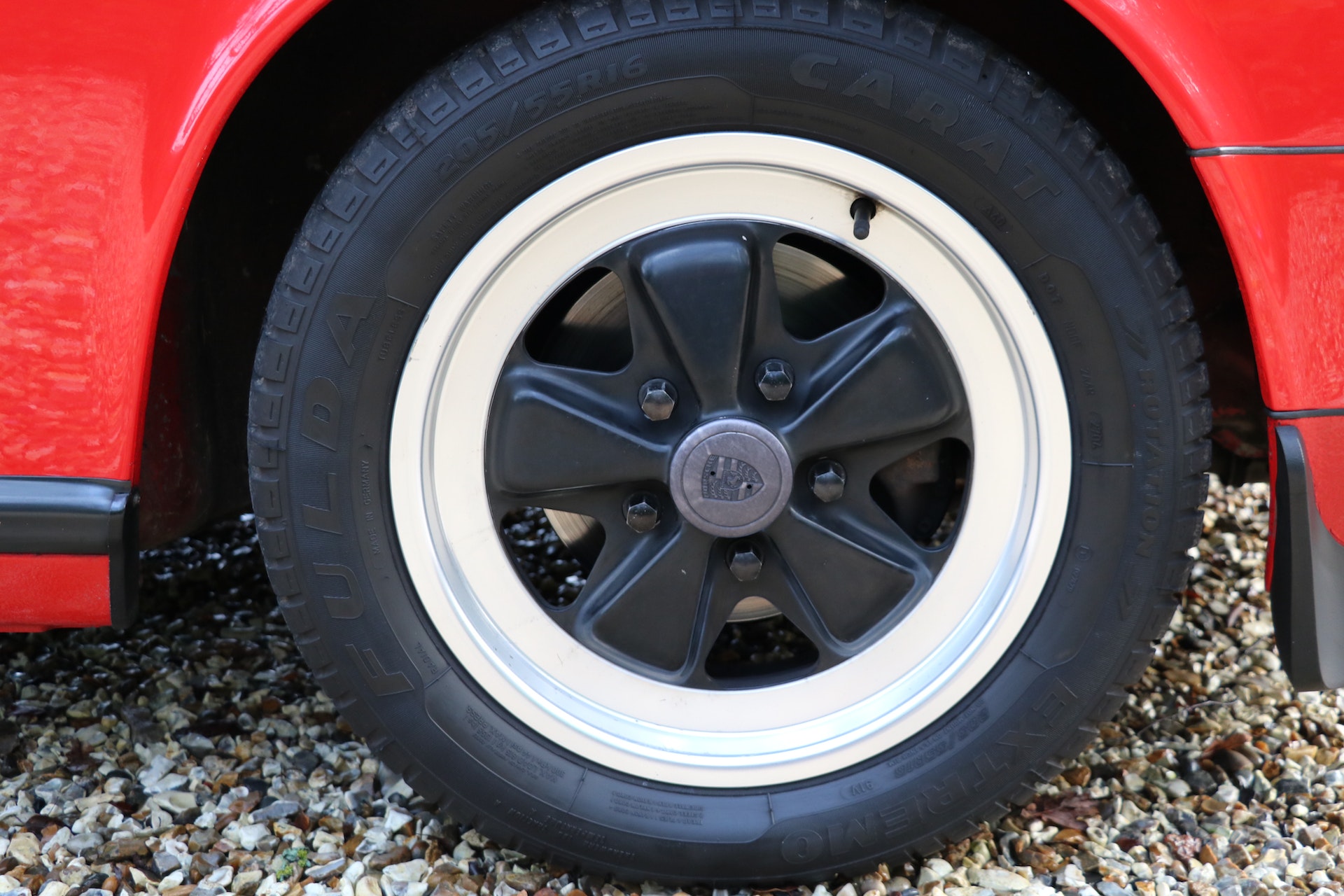 In the cabin, the upholstery is entirely original. The Sport package seats feature electric tilt and height adjustment, and are trimmed in black leather. There are a couple of tears on the driver’s seat side bolster, but the base is in good condition. The front passenger seat remains in great shape, as do the two rear seats. While the driver’s seat is eminently usable as-is, the next owner could commission a re-trim of the bolster section, perhaps even with patinated original black leather that is being discarded from another 911 of the same period. 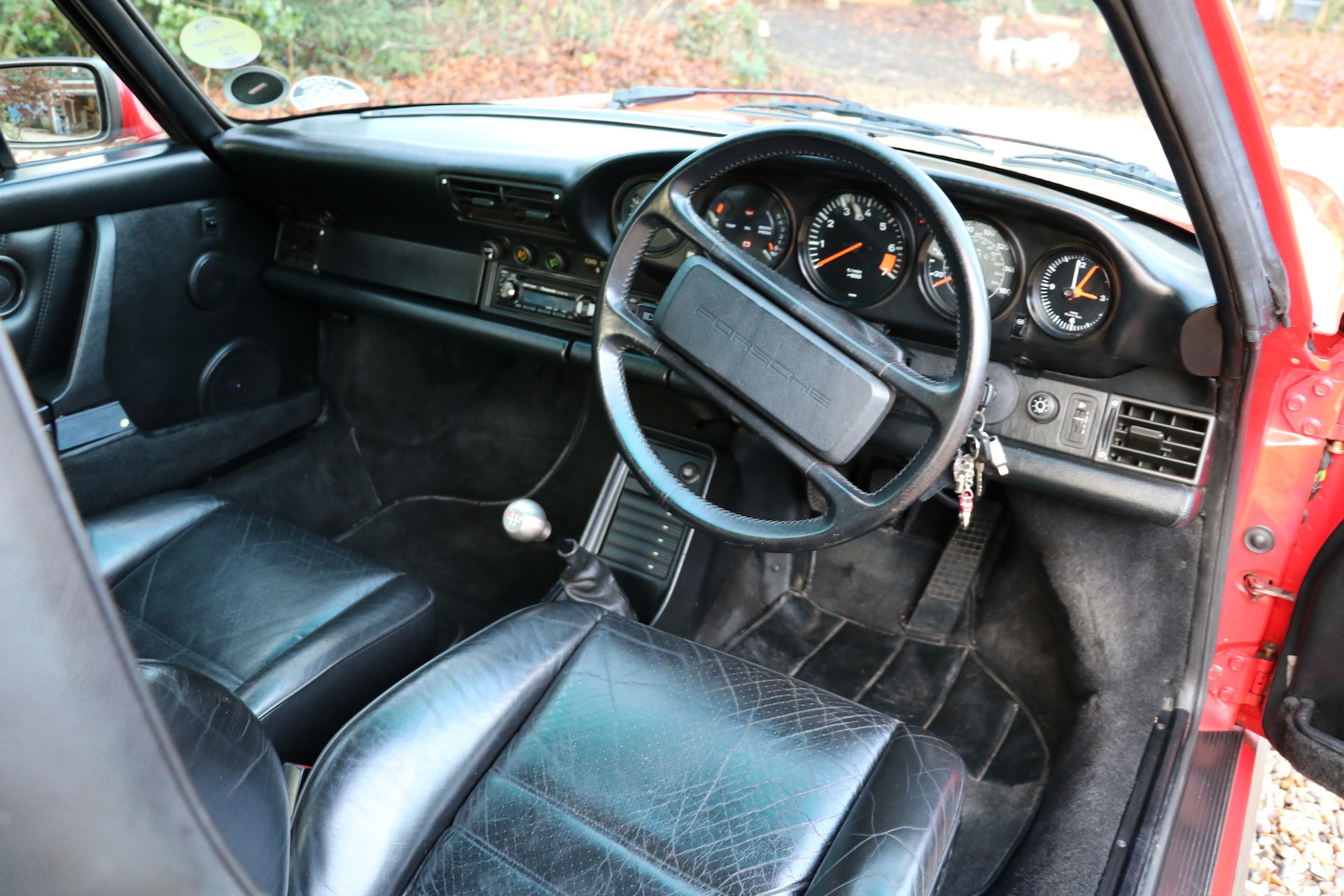 All of the switchgear works as it should, and the vendor reports that there are no faults. At the front of the car, the velour carpeted luggage compartment presents very well indeed, and the rain gutters around the boot are also in good order. 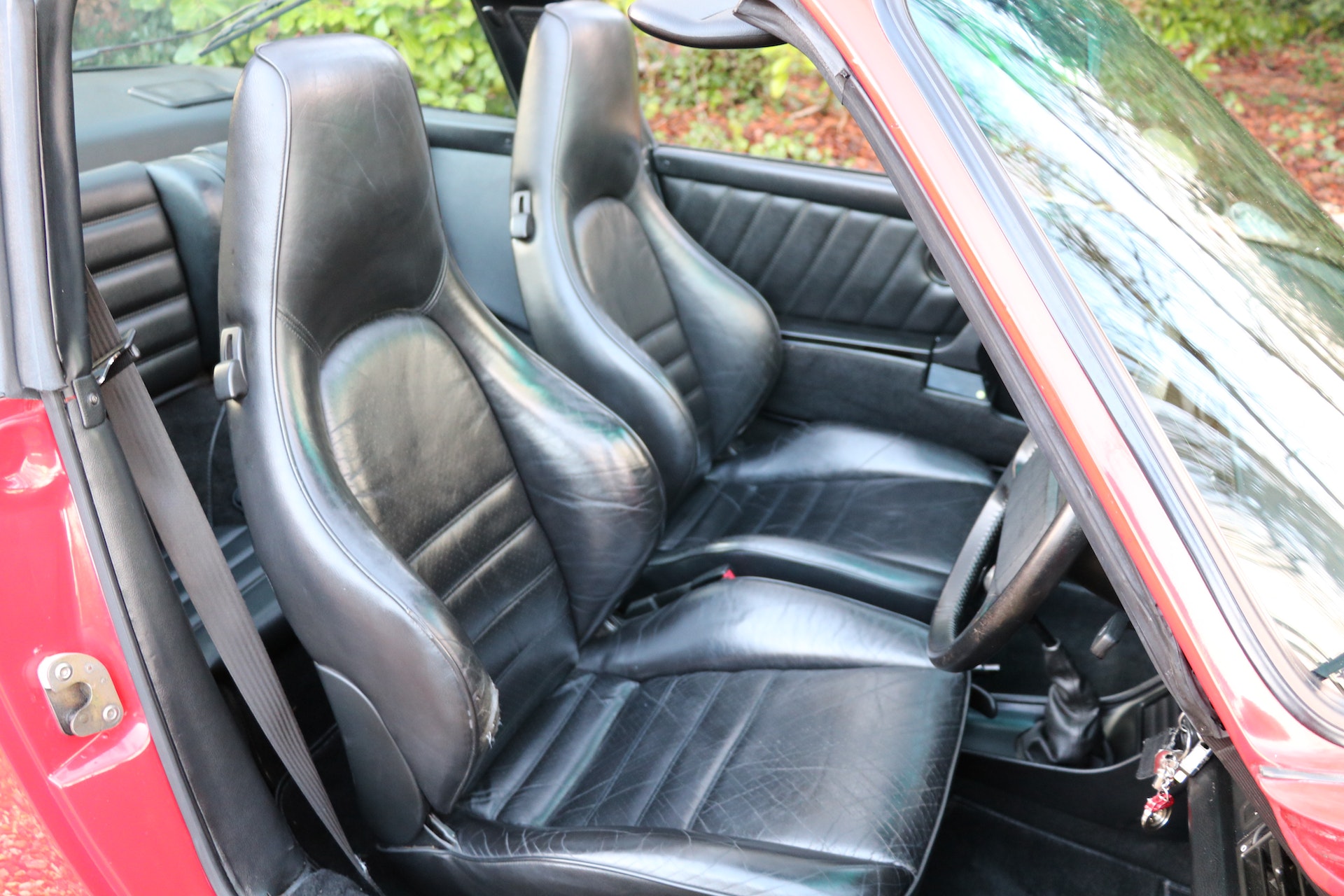 This is a mechanically strong car that starts, runs and drives very well. It was last seen by Northway Porsche in September 2019 at 107,446 miles, when a new alternator was fitted, along with an alternator belt, dashboard charge light and a fresh battery. Prior to this, it was given a full service by Northway in October 2017, which included replacement of numerous CV joint boots, as well as renewal of the brake fluid. 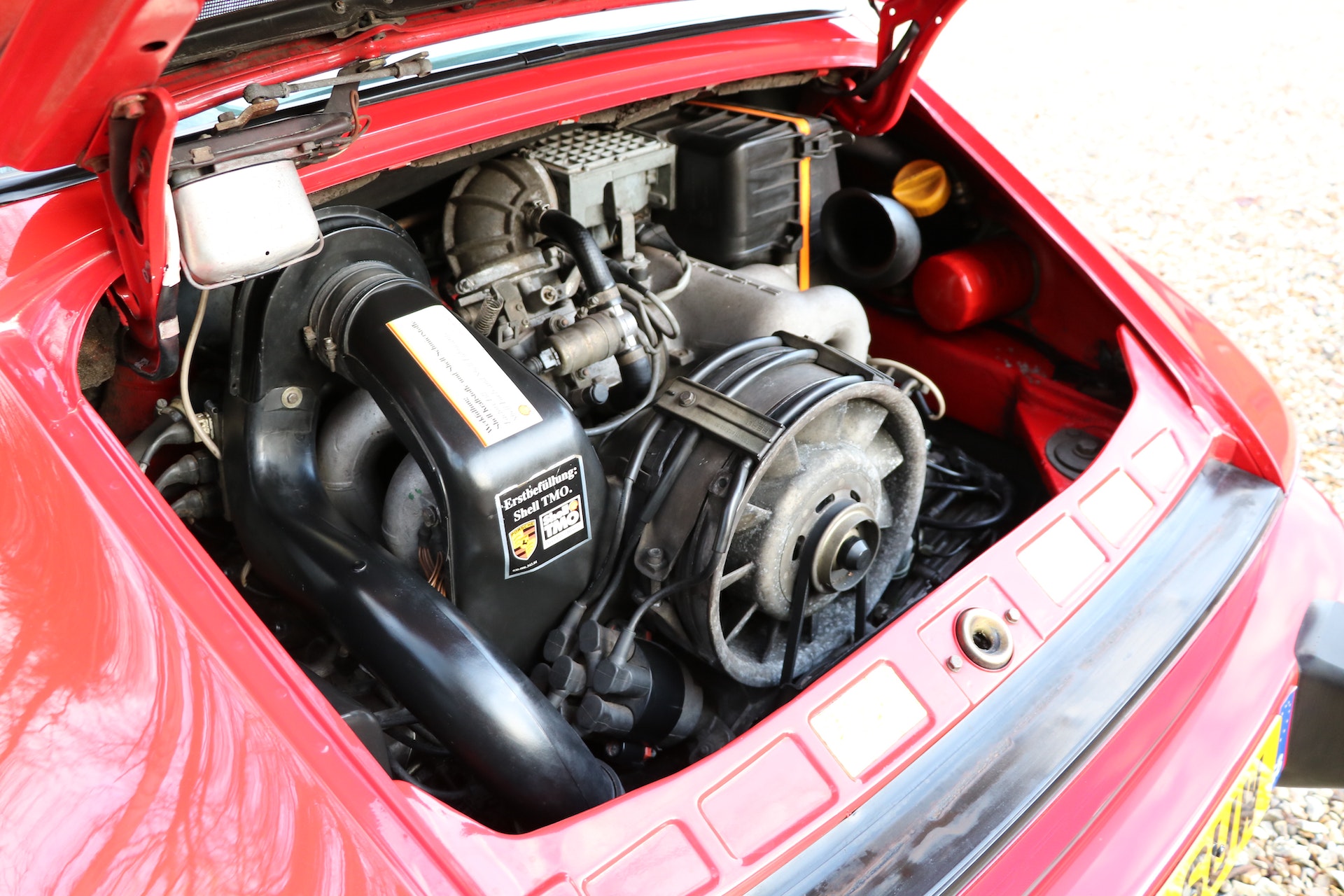 While the car has only covered just over 5,000 miles in the last 10 years, it was also seen and serviced in March 2013. In November 2011, at approximately 103,000 miles, a new Sachs clutch was fitted, along with a replacement release pin, roller bearing, and clutch slave cylinder. The engine oil and filter were also renewed, as was a fresh set of spark plugs. 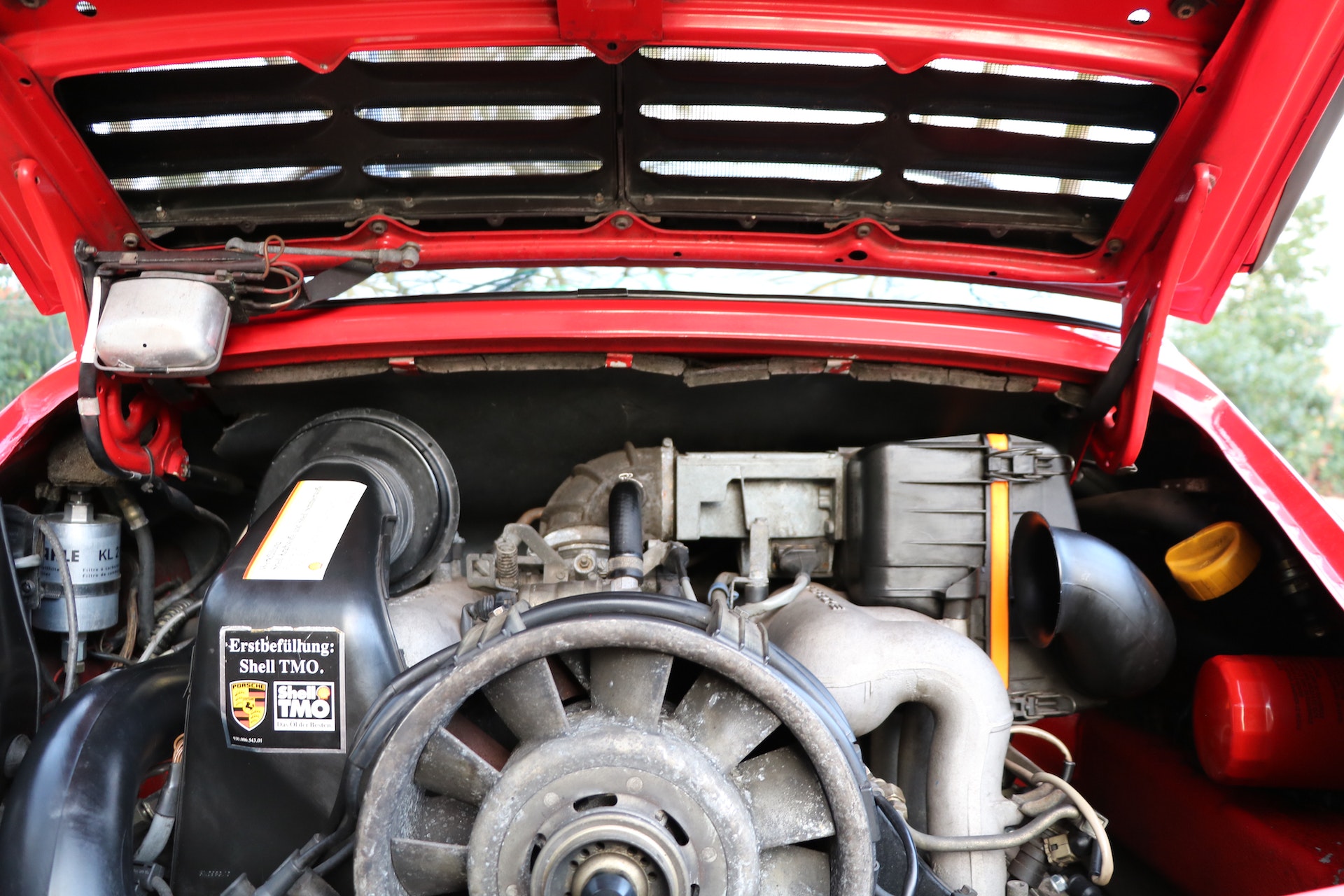 The most recent MOT was on 26 September 2019 at 107,447 miles, which resulted in a first-time pass noting only some slight play in the front wheel bearings to be monitored. The alloy wheels are shod in Fulda Carat tyres in size 205/55 R16 at the front and Avon ZZ3 in size 225/50 ZR16 at the rear, all of which have plenty of tread remaining. The Fulda tyres are dated-coded to 2004, while the Avons were manufactured in 2009. However, both pairs were fitted as new, unworn items when the vendor acquired the car seven years ago. 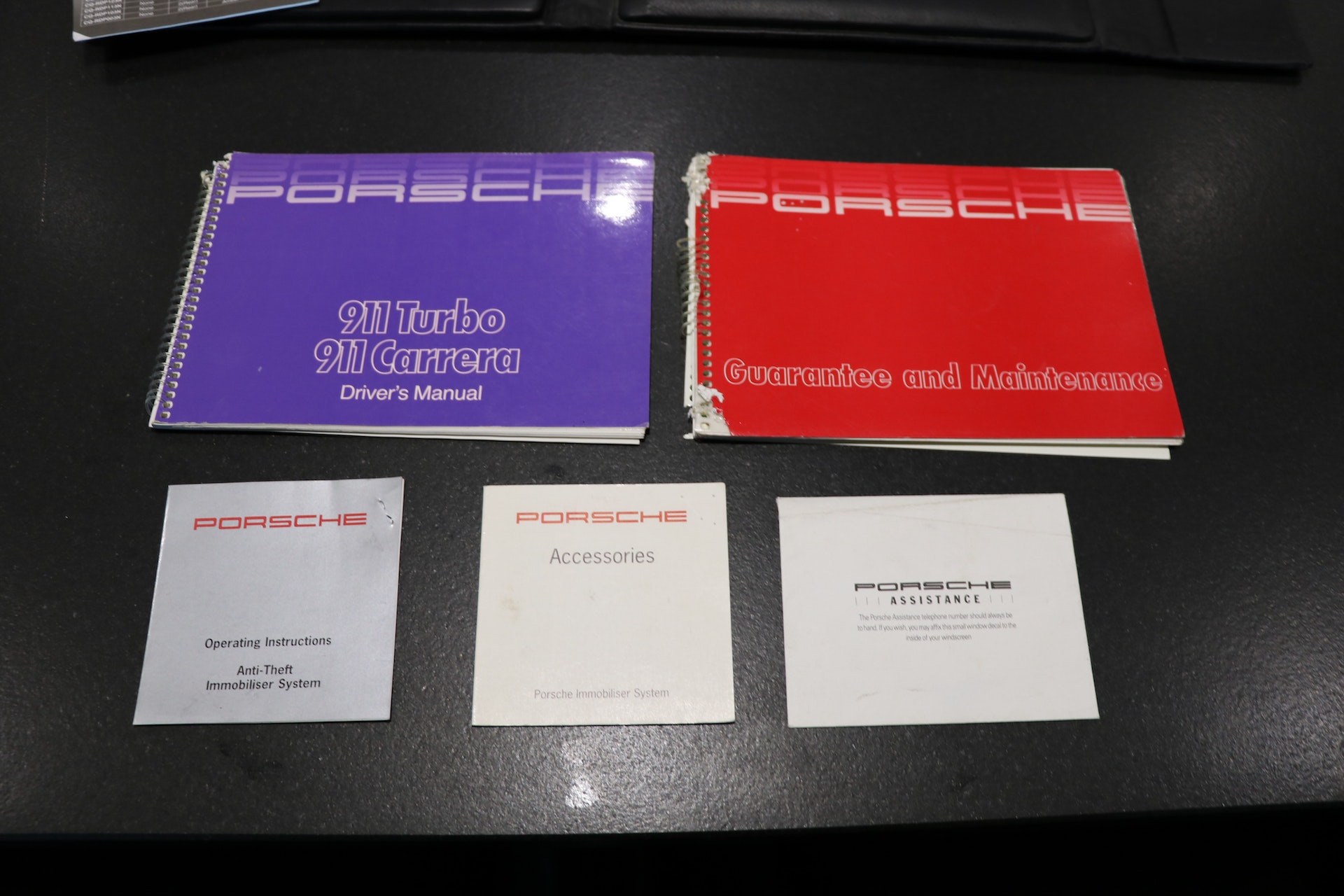 Accompanying the car is the original black leather pouch, containing the driver’s manual, stamped guarantee and maintenance record, and other sales literature. There is also a large amount of old invoices and receipts kept in a ring binder. The car comes with the correct style tool kit, as well as the original Porsche air compressor. 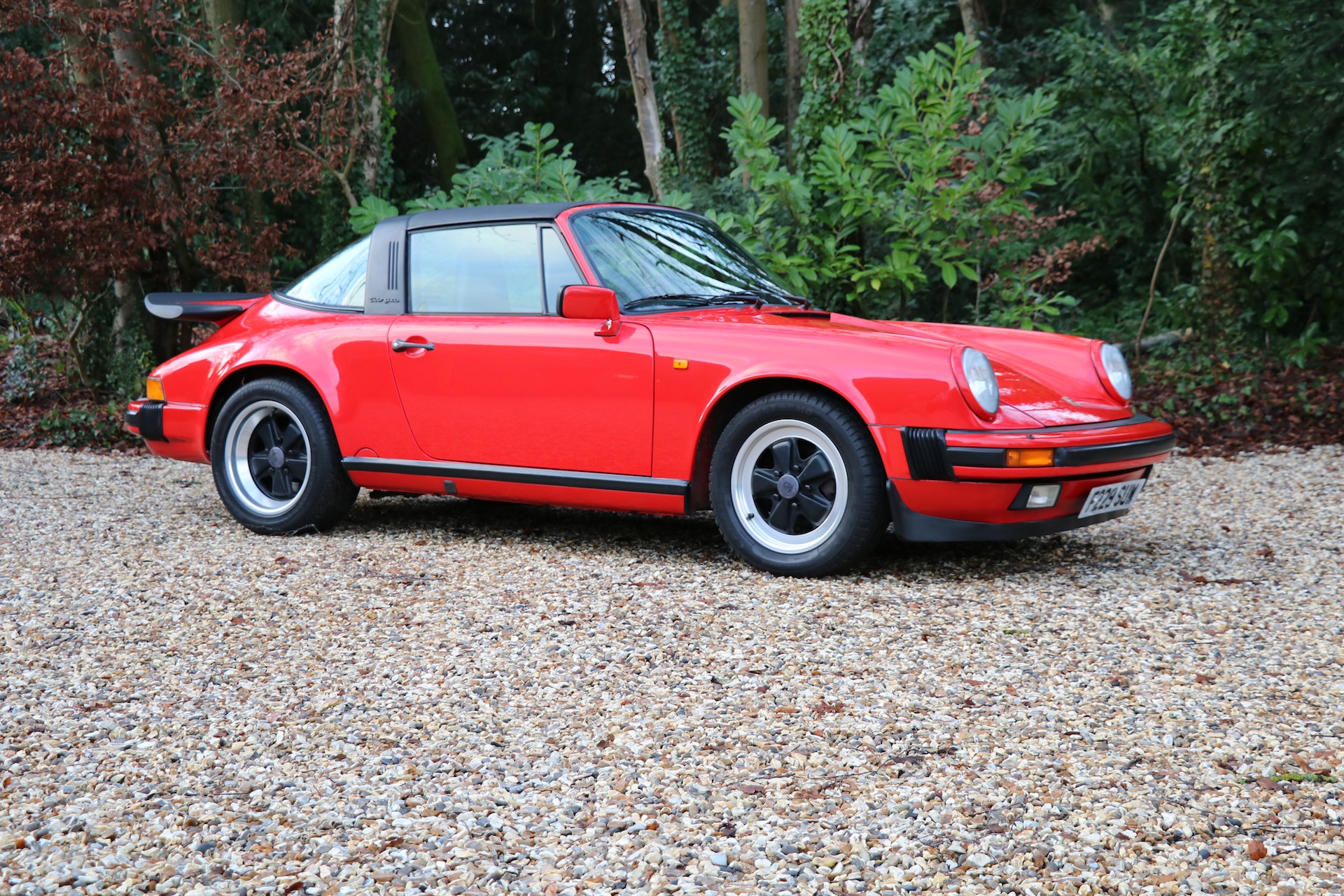 This Porsche 911 Carrera 3.2 Targa Sport is one of the definitive performance cars of the 1980s - and in Guards Red with the factory-fitted spoilers, it is perhaps the most representative of that era of excess. It is in superb cosmetic condition, and also drives beautifully on the road. There is nothing that the next owner needs to do to enjoy this straight way, so they can get on with the pleasure of driving this wonderful car as soon as they collect the keys.