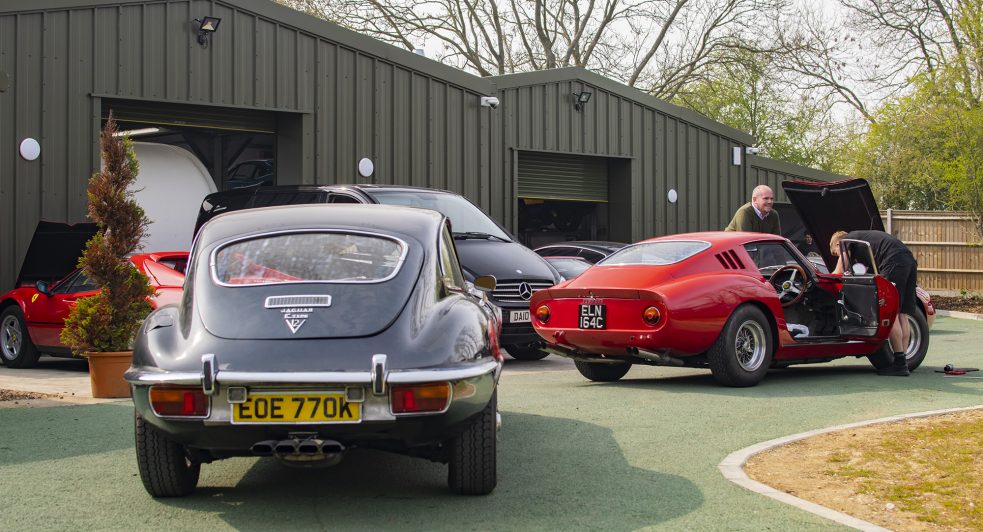 Bell Sport and Classic is a business that can trace its history back to a single object. Back in the late 1960s, having already established a business creating metal fuel cans, Mr Bell was busy crafting prototypes of a new formed-plastic fuel canister. At the time, you needed a government licence to manufacture fuel cans, and when the relevant authorities laid eyes on Mr Bell’s new effort, they all but laughed him out of the room.

Of course, thorough testing would prove just how strong and reliable this new plastic-formed fuel can was, and the government’s initial scepticism was soon replaced by respect. Compared to a metal carrier, the plastic ‘can’ was both cheaper and quicker to manufacture. The fuel crisis of the 1970s was all that Mr Bell needed to see sales of his low-cost product go through the roof.

The proceeds of his new product led to the purchase of a number of sports cars, including Austin Healeys, Triumphs and Aston Martins. Some years later, having sought the ideal place to look after his cherished cars, he would establish a new business in 1989 that became Bell Classics.

Initially based just to the east of the M1 motorway, Bell Sport and Classic’s premises are now just to the west of it, less than two miles away from the original site. The whole operation was acquired by its current entrepreneur owner around 12 years ago.

Tim Kearns joined the business as managing director in December 2018, after the owner asked if he wanted to help direct a longer-term strategy to grow the business. “There’s been a bit of a voyage of discovery since joining Bell,” explains Tim. The physical side of this is the extensive collection of parts, engines, chassis and bodywork that are stored securely off-site – and which probably merit a follow-up story in due course.

There’s also been an intangible discovery, which is the full realisation of engineering talent that Bell has at its disposal: “The strength of the business is the technical team, no question,” he adds.

One of the most highly-regarded technicians is Attilio Romano, who is known all over the country in Ferrari circles as a outstanding engineer. Hailing from the farmlands of southern Italy, Attilio’s first experiences of motorised vehicles were on the tractors used by his parents and relatives while out in their fields.

He cut his teeth in the motor industry via stints at Fiat in the late 1970s and then Lancia and Lotus in the 1980s. By the early 1990s he was at H.R. Owen, working with the Bugatti brand and the EB110 supercar. Having worked directly at the Ferrari factory after this, as well as a return to H.R. Owen, Attilio joined the Bell business nearly three years ago.

These days, Attilio can usually be found with his hands in the engine bay of something Italian. He has vast experience of classic models, but is also qualified to work on some of the latest hypercars – including the LaFerrari.

Today though, we find him working on a Maserati Kyalami, which is an obviously well-used example. “It doesn’t matter if a car’s not a Ferrari 250 GT short-wheelbase or a PF Cabriolet,” explains Tim. “What matters is that we like to engineer things. We like to build things, we like to fix things and we like customers to be really happy at the end of that journey.”

Behind Attilio’s work station is Bell Sport and Classic’s engine room, which can be sealed and set to the ideal temperature of a steady 22 degrees celsius. A Ferrari 250 GTE engine sits wrapped up just outside on the floor, while inside is an Aston Martin DB6 unit and the V8 from a Ferrari 308 racing car.

“It’s interesting to hear the engineers’ opinions on different manufacturers,” says Tim. “They typically consider the Aston engines to be quite agricultural in terms of technology, compared to a Ferrari engine of the same period, which are the technical masterpieces.”

Around the corner from the engine shop, a Lamborghini LM002 has been squeezed through the wooden outer doors to sit inside a workshop bay. The owner had to pull the car out of another business mid-way through a project as they simply didn’t know how to finish it.

“What’s interesting about that LM002 is that there are guys in our team now who almost certainly worked on that very car in London when it was new,” explains Tim. “Our general philosophy is: no matter what car you have, we know how to look after it.”

The more we look around the premises and discuss the cars we find, it becomes clear that there’s a refreshing focus on solid engineering that ultimately makes cars more useable and enjoyable. It’s perhaps exemplified best by the car belonging to the business’ owner: a well-loved but slightly scruffy 275 GTB, which is mechanically sound and used on the road frequently.

Tim is keen to stress that their customers get to liaise on the engineering work with the mechanics directly, which sets the business apart from numerous other specialists. “Our clients just want to deal with the people who know their car best. They talk to technicians when they’re on site anyway, so there’s no reason that they can’t be a major point of contact.”

As we take a look at some of the more labour-intensive project cars, Tim discusses a Ferrari 250 GTE that is undergoing a total rebuild. It was purchased from the ‘Duemila Ruote’ auction in 2016, and is now waiting for a particularly interesting restoration project to commence.

It will remain as a 250 GTE, but there are a few key details that must remain secret for now. The team at Bell Sport and Classic will hopefully invite us back to reveal more at a later date.

Just before we leave, Tim points to the empty piece of land at the bottom of the site. “On that patch we’re about to build a clubhouse. It’ll have live restorations, detailing bays, a cafe and even a cinema for the kids.” For this business, as with many others, the community aspect of collectable car ownership is a core part of its future planning. “You can come and sit here on a Saturday morning, have your car washed and grab some coffee and breakfast. That’s the final piece of the puzzle.”


Back to all stories

Collecting Cars visits ‘Classics At The Manor’, an event with an approach that diverges from the cars-and-coffee format