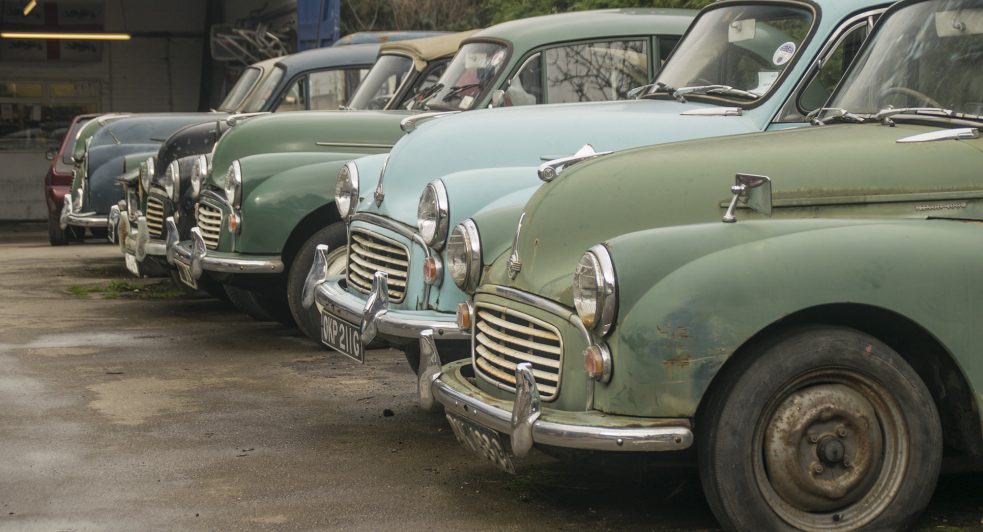 Tucked away on a quiet back road in a Kentish market town, you’d be forgiven for thinking that the team at Morris Minor specialist Kings Street Motor Services are just busy tinkering away on cars for the locals. However, many of their clients come from much, much further afield, only discovering the business thanks to recommendations from other customers around the world.

Proprietor Andrew Warrener learnt to drive in a Morris Minor Traveller (and still owns it) but started working with the cars professionally during his job at a Ford franchise near London in the 1980s. The principal of that company at the time had devoted some of the group’s space to the popular Morris model (without Ford’s knowledge or permission). This part of the business was run as a venture with famed Minor restorer Charlie Ware, almost as a satellite site to his Morris Minor Centre in Bath. Some years later, Andrew bought out the Morris operation from the Ford franchise and moved the whole operation down to West Malling in Kent.

Ware had been a wealthy property developer before the crash in the 1970s, and in the decades after this became a champion of the Morris Minor’s glorious simplicity. He even wrote a book – Durable Car Ownership – in a bid to help people keep their cars in roadworthy condition for as long as possible. Andrew shares this admiration for the Minor’s simple mechanicals, but believes its design is also central to its popularity.

“The Morris Minor never developed into a completely different car; there is no ‘new’ version of it that could affect its heritage,” he explains. “It has an iconic shape that is instantly recognisable, and we find that the Minor appeals to all types and ages of people. We have sold cars to viscounts and other peers, but also to students and first-time classic car owners – people from all walks of life. It’s a totally classless car that attracts an incredibly broad demographic.”

Production of the Morris Minor started in 1948, with the saloon-only MM model that had headlights placed lower down, on either side of the grille. The Convertible followed shortly afterwards, followed by the two-door Traveller estate. Other than the switch from a side-valve to an overhead-valve engine, and some minor interior trim updates, very little changed through the Minor’s production run until it ended in the early 1970s.

“The early ones might be sought after by the most dedicated Minor fans, but actually the models with the more powerful engine and later gearbox are the better cars to drive,” explains Andrew. “If you’re looking for the best all-around Morris Minor to buy, then for me it would be a late Traveller model. It’s a great cabin to spend time in, with eight opening windows and visibility that is second to none. It’s wonderfully simple to drive, and a lovely car to own.”

“The wood frame is made from Ash, and if there’s even a tiny bit of rot present, it’s almost always better to do a full restoration with all new wood than try to salvage the original. We can align the frame on the car to fit it to the shape, then take it all off to assemble it properly before it goes back on. It’s not a small job, so it tends to take us about two or three weeks to renew a Traveller’s woodwork to the highest standard.”

Some of the cars sitting in the yard at Kings Street Motor Services might look like donor cars, but Andrew explains that one of the strengths of the Minor is that almost everything needed to piece a car back together is available if required.

“The areas that see rust issues are generally the same on each car, and all of the panels to fix those are available – and almost to the exact shape and quality of fit as the originals, which was very good. It’s one of the few classic cars of its era that you can rebuild to ‘as new’ in this way. Even something as simple as a Mini has a structure that’s a lot more complicated.”

The more you look over the quality of work and attention to detail applied by Andrew’s team, the less surprised you’ll be that the business doesn’t spend any money on advertising – or even its own website.

“I sometimes wonder where new customers come from,” says Andrew. “Especially when we get a call from North America or Malaysia. They could be looking for the odd rare part, or be enquiring about a full restoration.”

These sorts of calls are not uncommon, and Andrew’s team secures a fruitful pipeline of business from clients on other continents purely on the strength of word-of-mouth recommendation. “We’ve sent a lot of cars to Europe, but the farthest-away place our cars go is probably North America. There have been quite a few customers who have had Minors restored with us and then sent over to that side of the Atlantic.”

The balance of work at Kings Street has shifted noticeably in recent years, from mostly servicing and mechanical work to an increasing number of top restorations. Around three quarters of the team’s time is now dedicated to producing outstanding examples of these popular British classics for Minor fans around the world – and it’s easy to see why Andrew and his team’s work is in such high demand.

Back to all stories

Collecting Cars visits ‘Classics At The Manor’, an event with an approach that diverges from the cars-and-coffee format