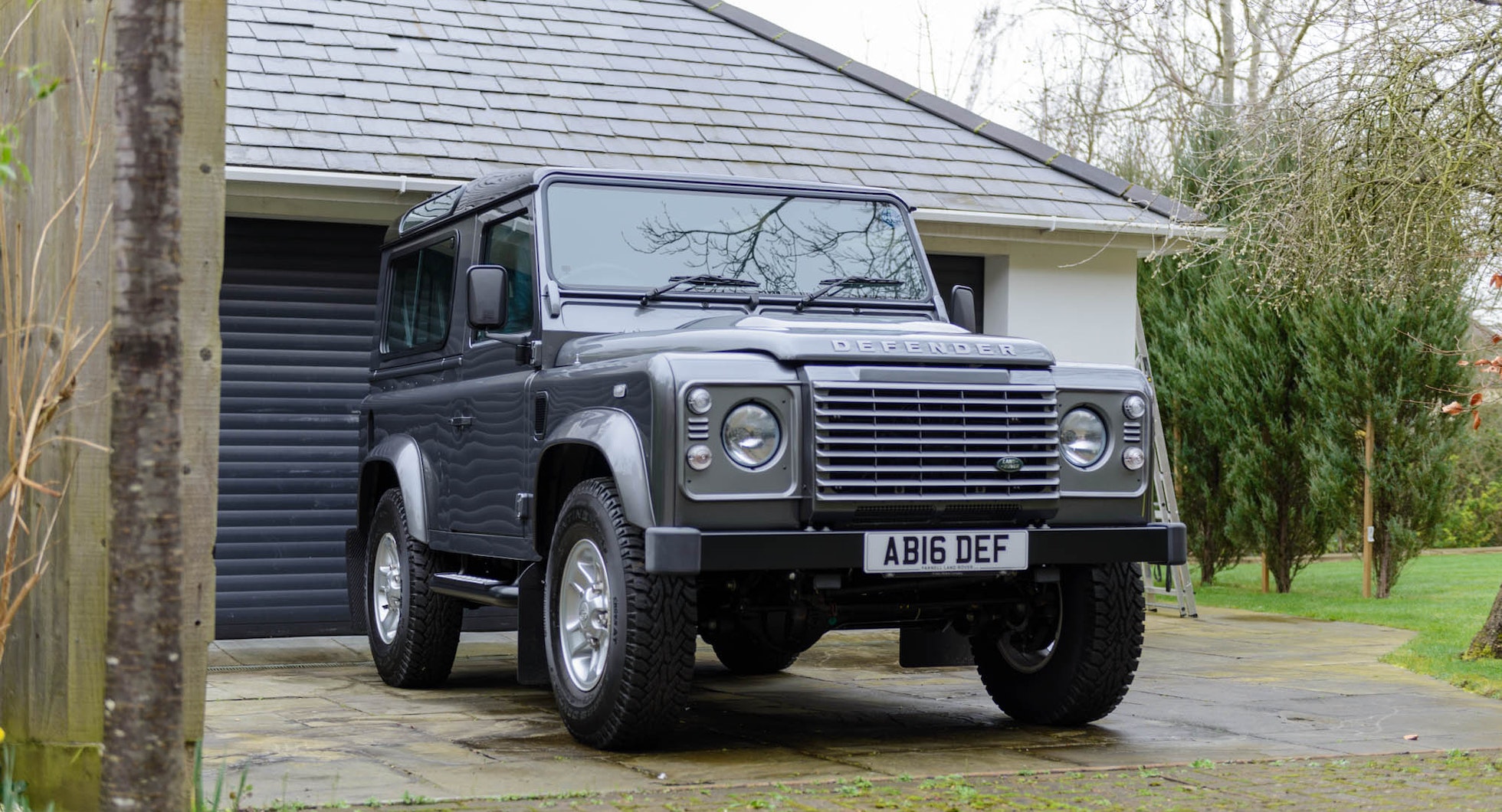 This Land Rover Defender 90 XS is one of the very last examples of the world-famous 4x4, built in January 2016, and offered by the first and only owner from new. Its engine is the 2.2-litre DT224 producing 120bhp, with permanent four-wheel drive via a six-speed manual transmission. The odometer shows just 300 miles from new. The car was allowed to be held by the dealer with special permission from JLR so that it could be registered with that year’s new ‘16’ plate. 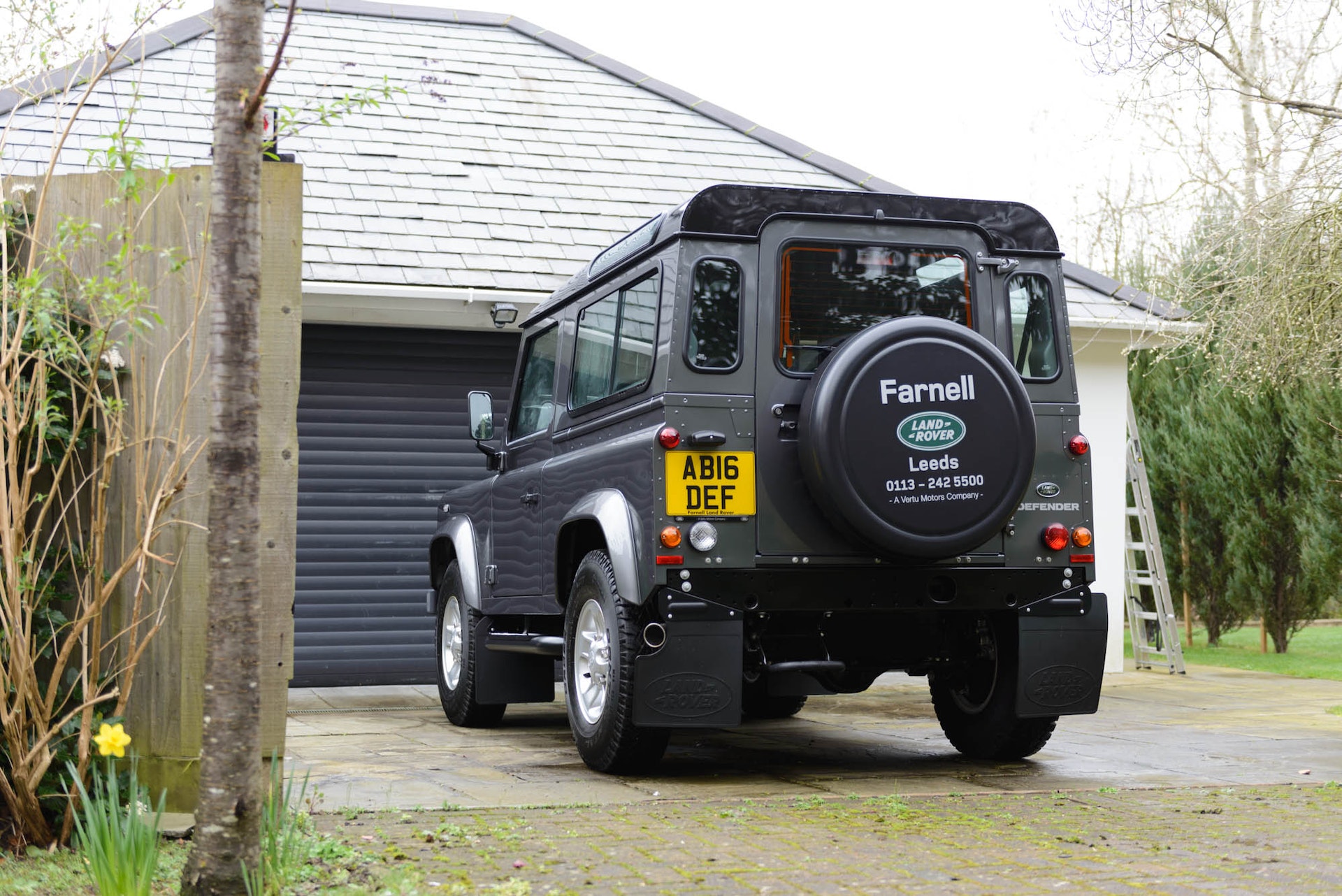 While there were various special editions of the Defender launched in its final year, a number of individual order cars were also among the final examples built, before the very last one came off the line at Solihull in January 2016. This is one such car. LR Workshop’s estimate tool puts this car’s build completion date at 7 January, with a margin of seven days either side. 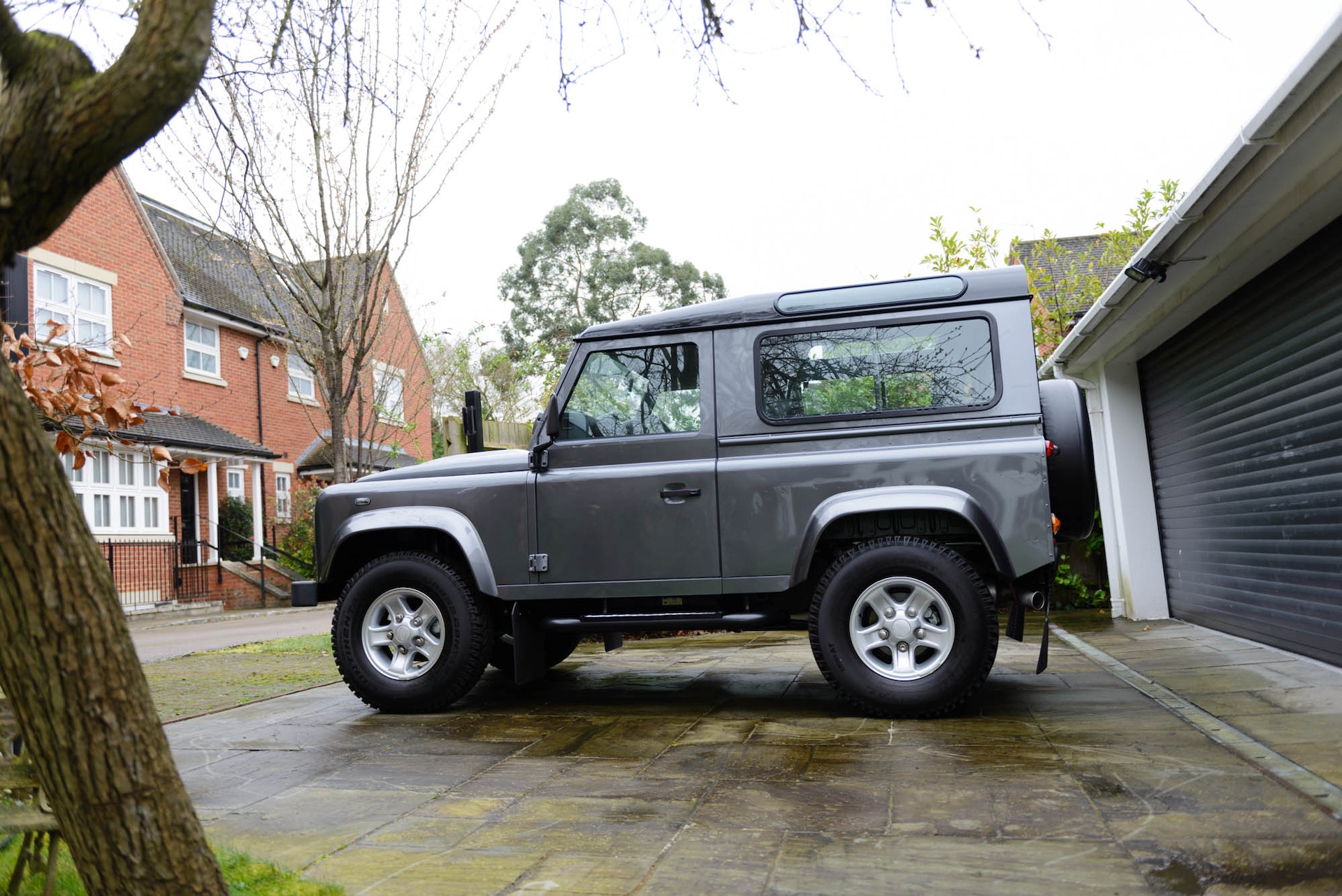 Supplied new via Farnell Land Rover in Leeds, its pre-delivery inspection was carried out on 19 January 2016 with just five miles on the odometer. Its owner collected the car on 1 March 2016, and drove it home to Enfield. Other than regular starting, running, and short drives to keep the moving components in good working order, it has been kept under a tailored car cover in his garage since then. 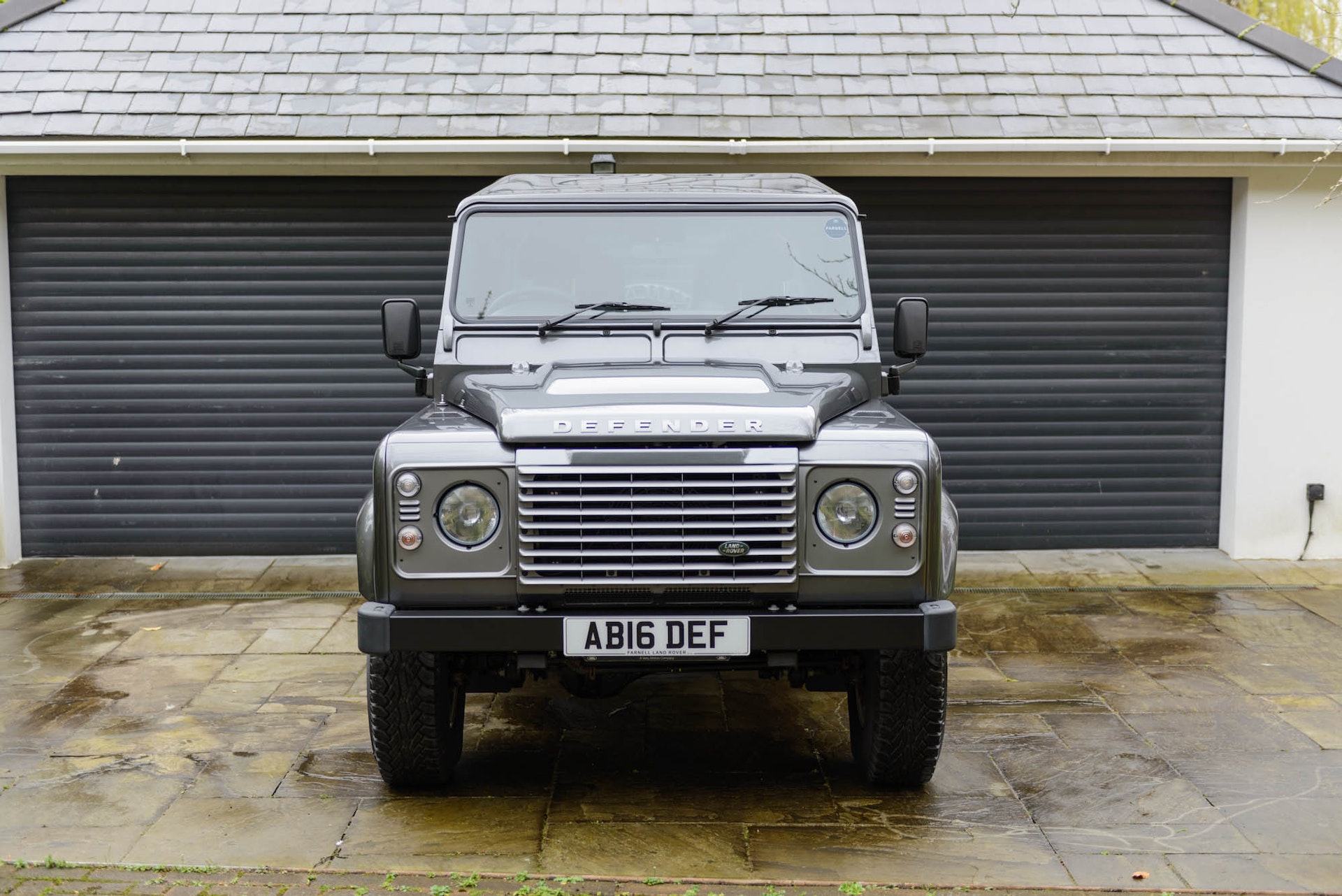 This Defender’s bodywork remains in pristine condition. It has never been driven off into muddy green lanes, or taken out on salt-covered roads. The original Corris Grey and gloss black roof finish is immaculate, with no dents, scratches or scuffs on any of the panels. All of the rubber window seals, plastic body trims, metal bolts, and light lenses are still in superb condition. The car sits on the original 16-inch ‘Boost’ alloy wheels, which have no damage or tarnishing whatsoever. 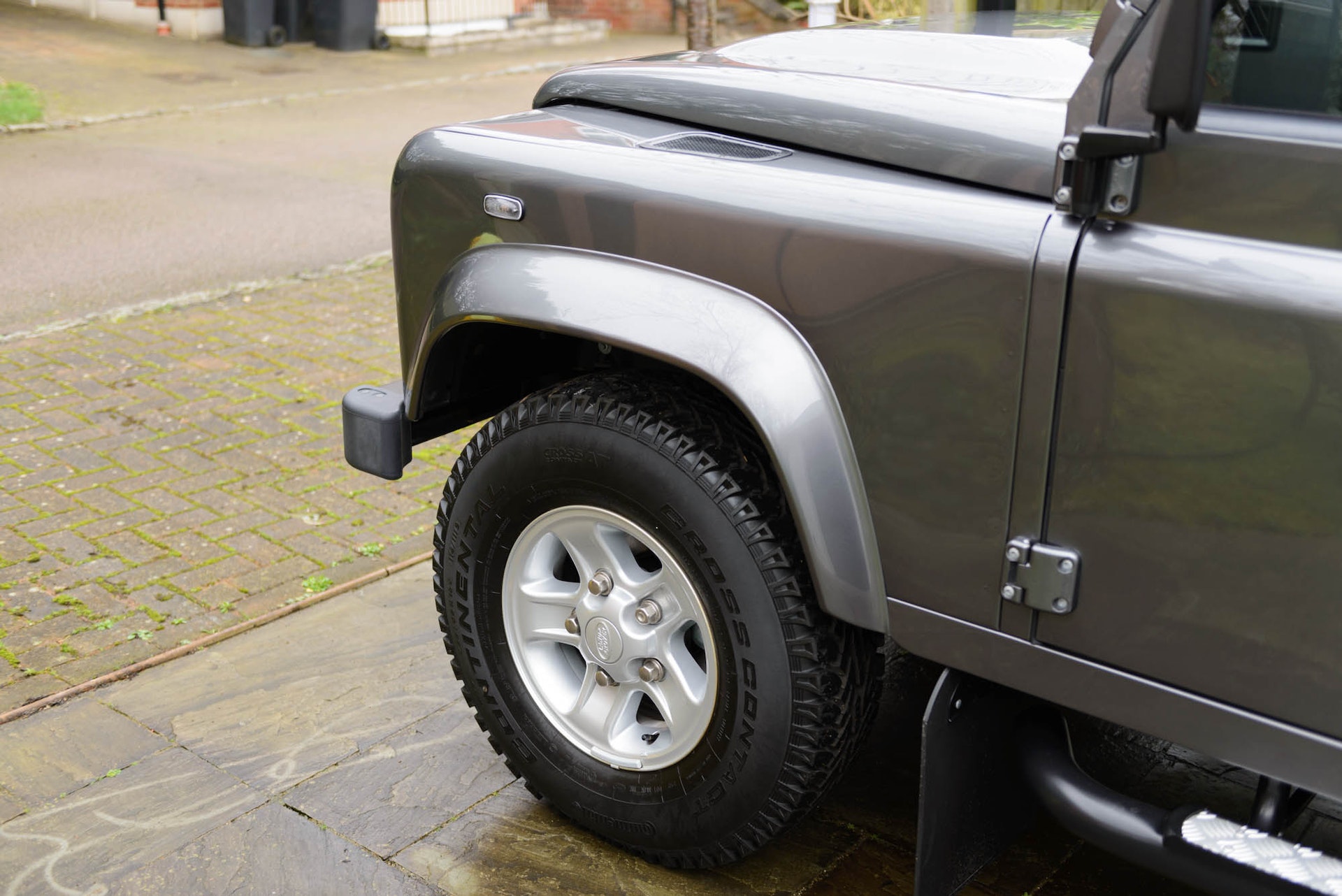 Inside, the four individual seats are trimmed in the original factory ‘Part Leather’ upholstery. The seats are unmarked as you would expect, with no wear or damage. There is also a leather-trimmed steering wheel, as well as the optional central cubby box trimmed in black vinyl. 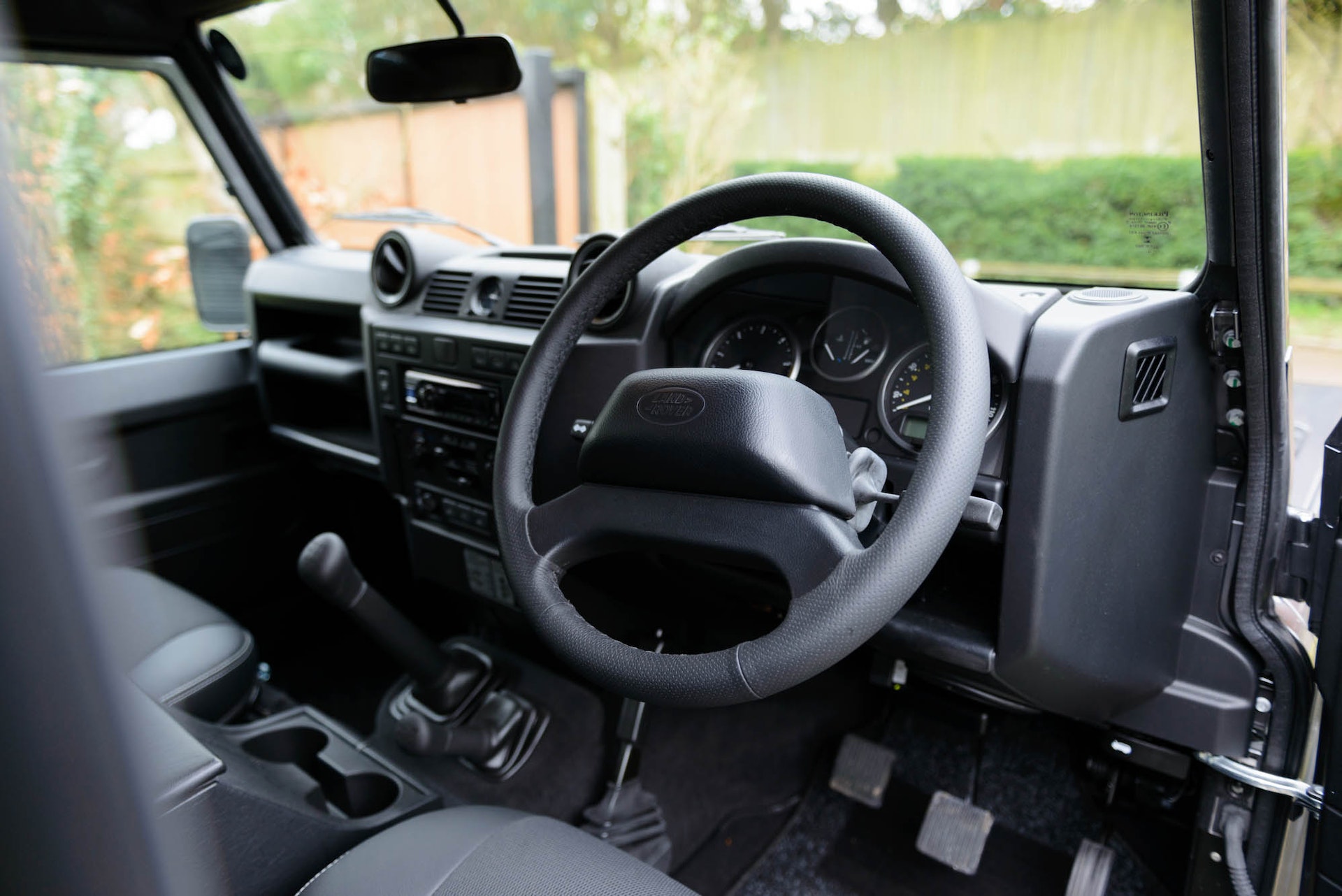 The headlining and sun visors are trimmed in Alcantara, and the original carpets have been kept pristine by a separate set of overmats. Factory-fitted equipment includes air-conditioning, heated front seats, and the Alpine CD radio head unit with Bluetooth. All of the switchgear is as-new, and the electrics all work perfectly. 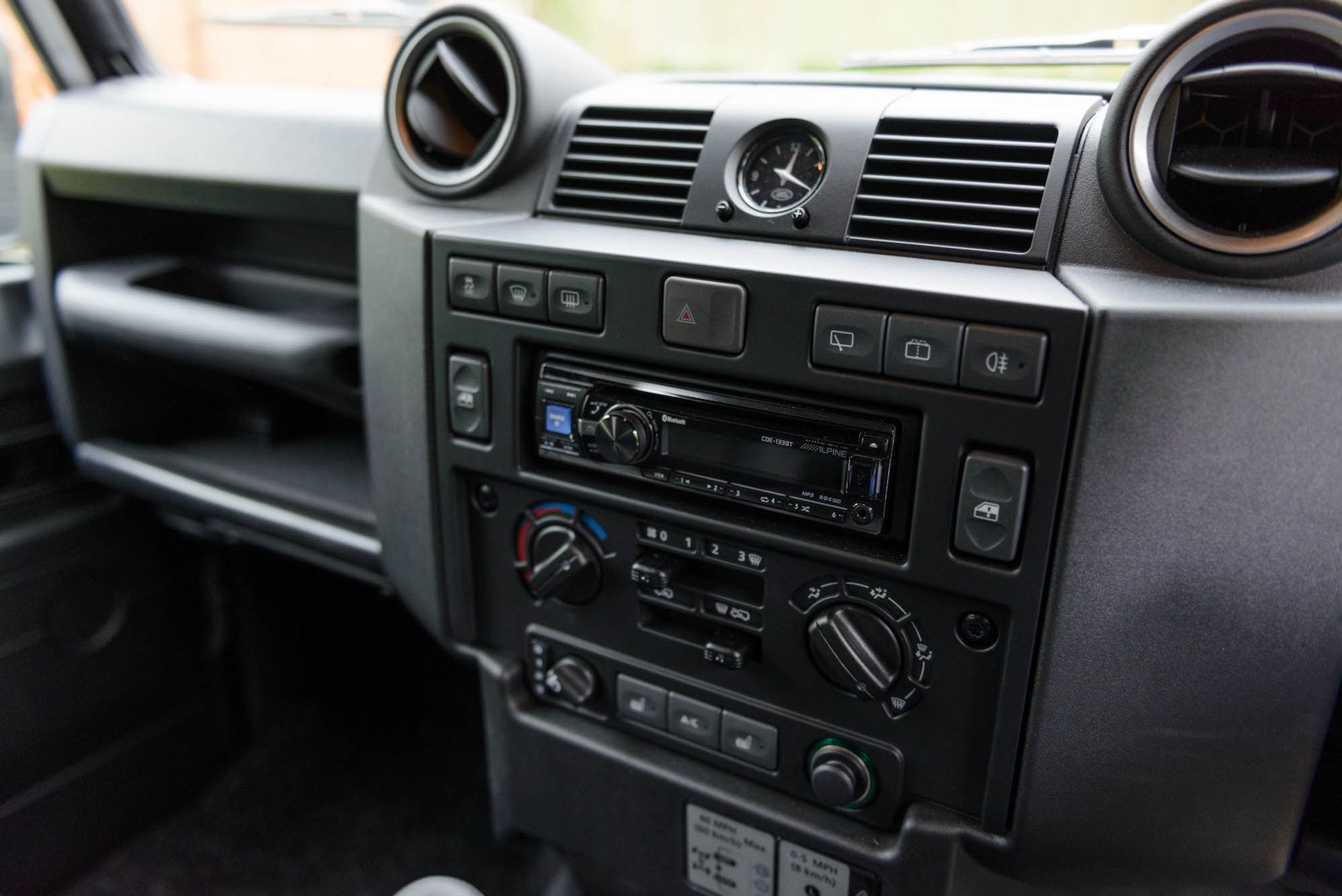 Opening the bonnet reveals an engine bay that is still in showroom condition. One year after collection, in March 2017, it was taken to independent specialist Broadfields Garage in Hertfordshire for its running-in service. Since then, the owner has ensured that the engine oil and filter have been replaced annually, and that it has been run and driven briefly as described above. When not in use, it has been kept on a trickle charger. 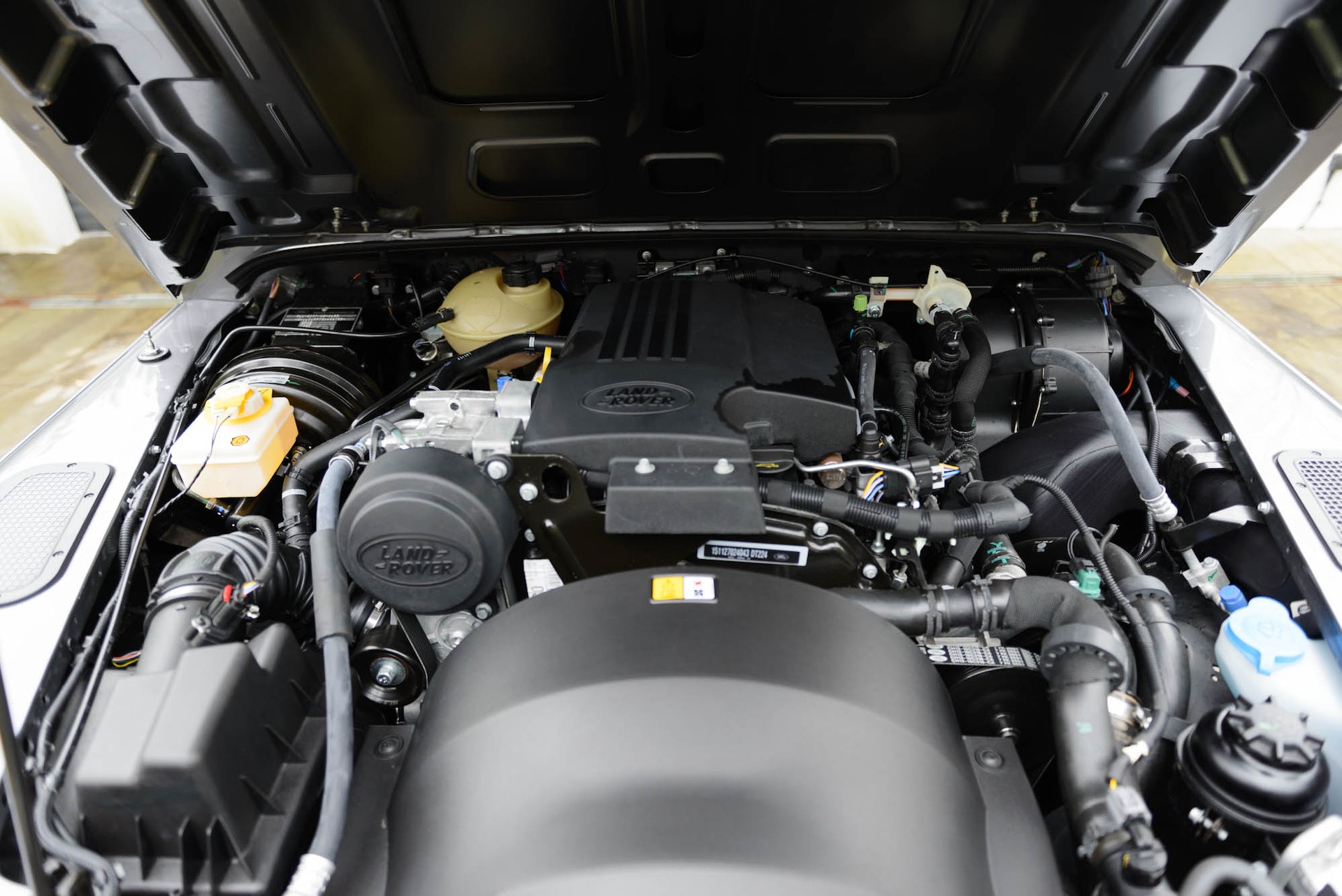 As it has been kept in storage off the road for the last year, it has not yet had its first MOT test. The alloys - including the full-size spare - are fitted with the original set of Continental CrossContact all-terrain tyres in size 235/85 R16, which are as-new and date-coded to 2015. 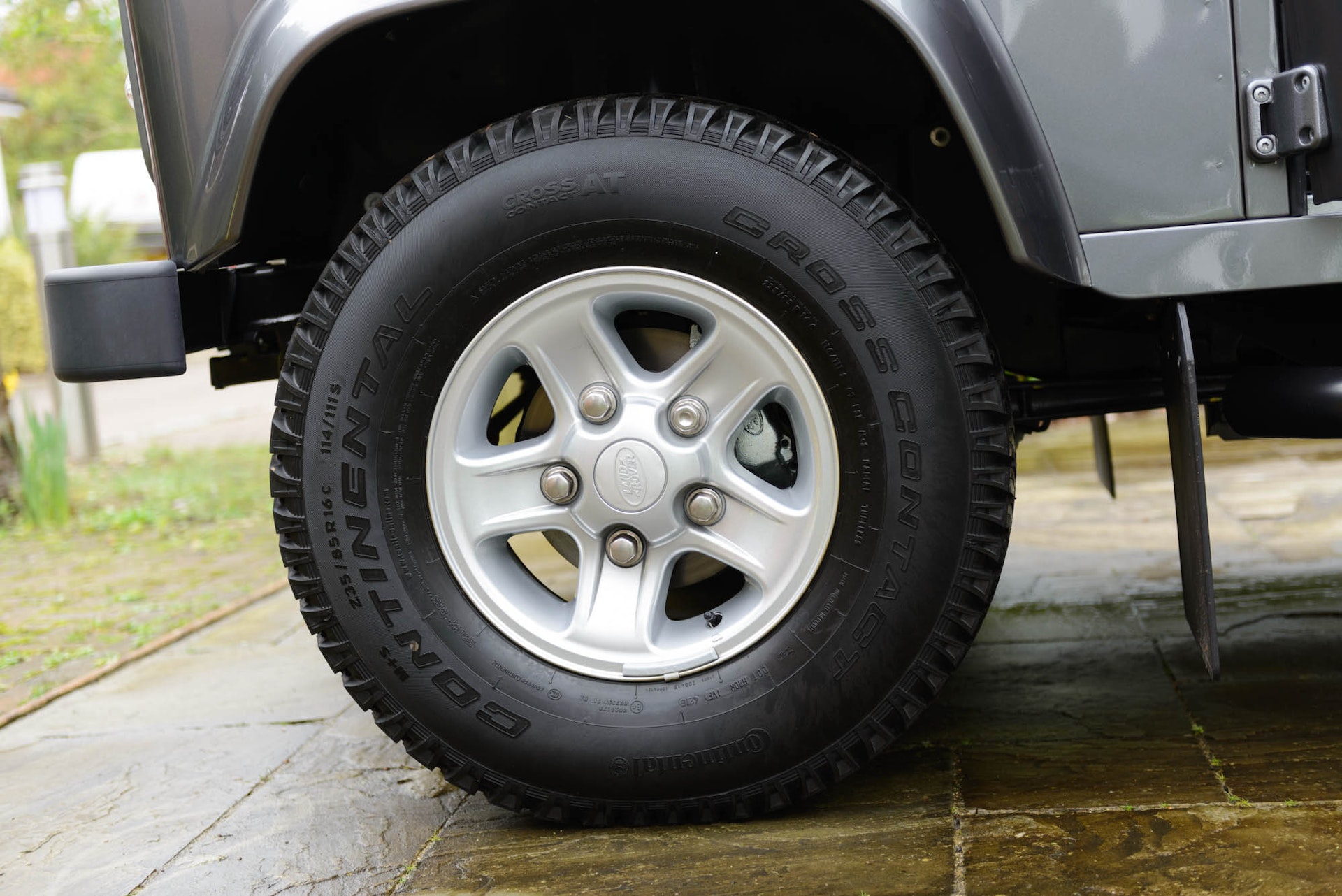 Accompanying this Defender is the original leather wallet containing the Land Rover sales literature and owner's manual, as well as the warranty and service booklet. Two sets of keys and remote fobs are also present, and each key was individually wrapped while stored, to avoid any scratching of the fob’s metal detail. 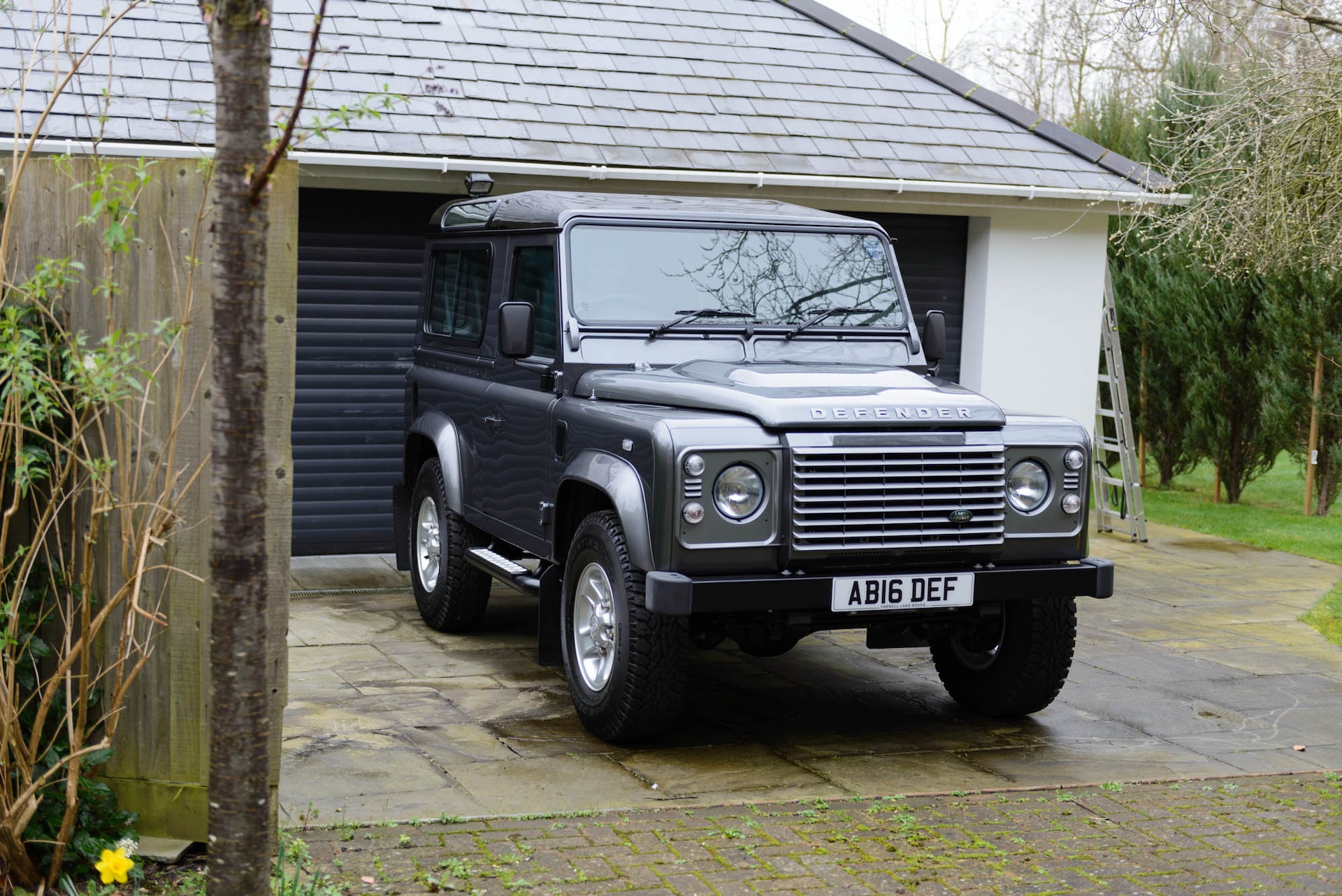 This Land Rover Defender 90 XS is a handsome example of a timeless design, with a desirable ‘final month’ build date, and exceptionally low mileage from new. The Defender finds enthusiasts among every generation, and with the all-new model arriving this year, the original icon will surely remain as collectable as ever. This is an immaculate one-owner car that represents an unmissable opportunity for any serious Land Rover fan or collector.

Please note: the cherished plate shown on the car is not included in the sale. It is available by separate negotiation with the seller. By default, it will be switched back to another age-related registration plate in the event of a successful auction.