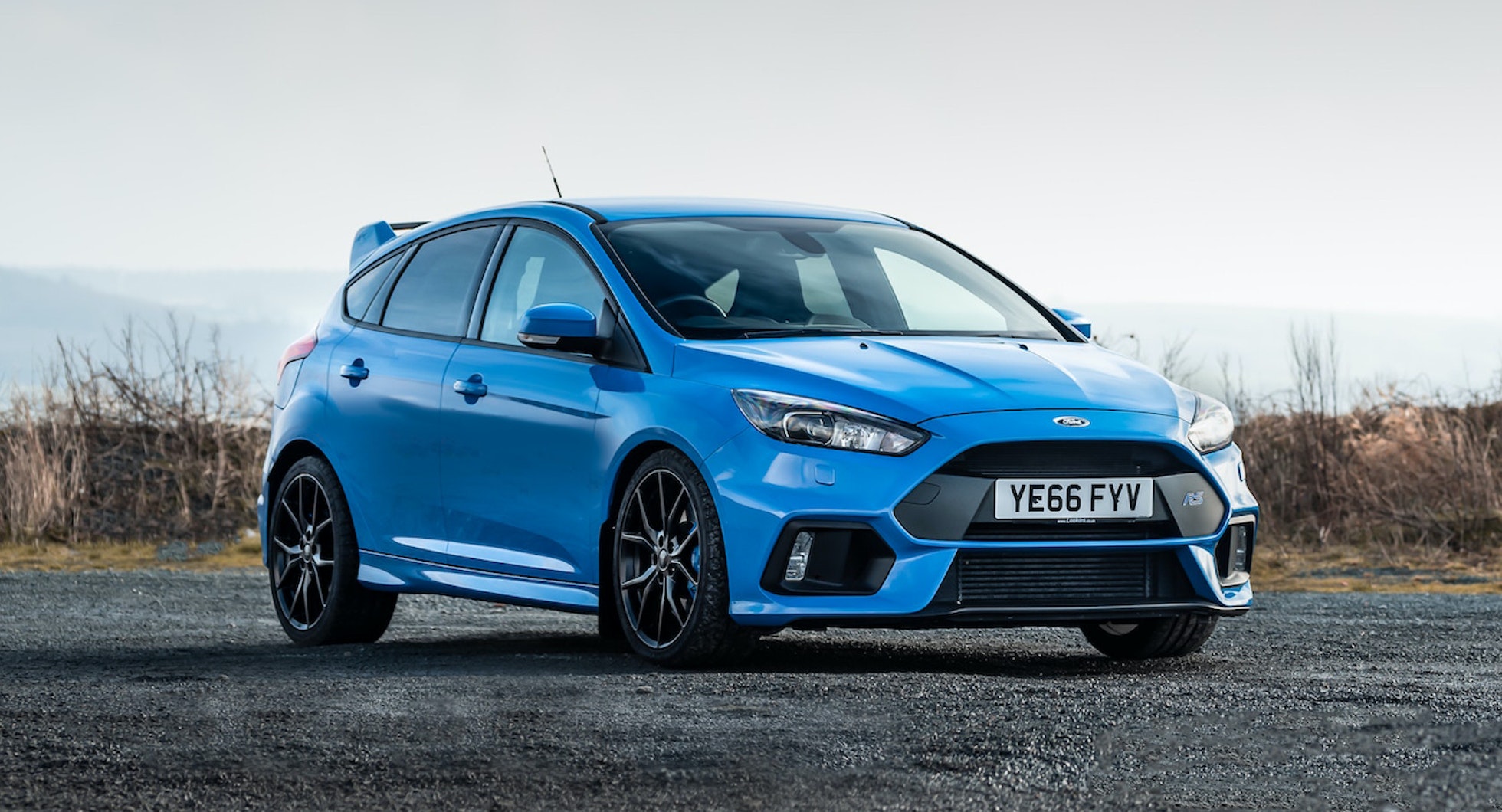 This 2016 Ford Focus RS (MK3) is a sought-after hot hatch in superb condition, and it features the aftermarket warranty-approved Mountune FPM375 upgrade, making it all the more desirable. Presented in the eye-catching Nitrous Blue over a Black interior, this contemporary performance car has been impeccably maintained from new. It is powered by the 375hp 2.3-litre four-cylinder uprated engine, with all-wheel drive via a six-speed manual transmission. The odometer shows 9,800 miles from new, which is fully supported by the service history. 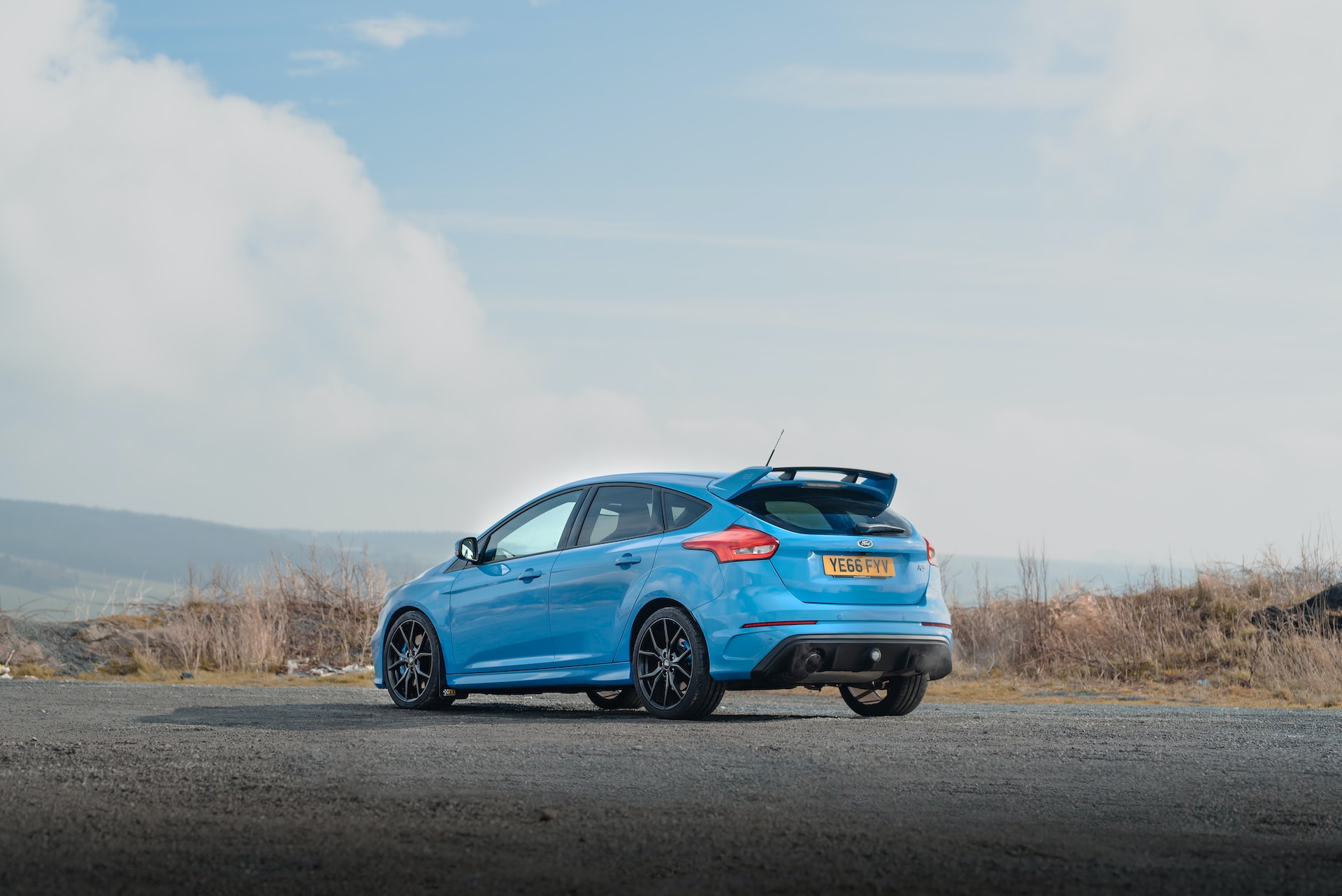 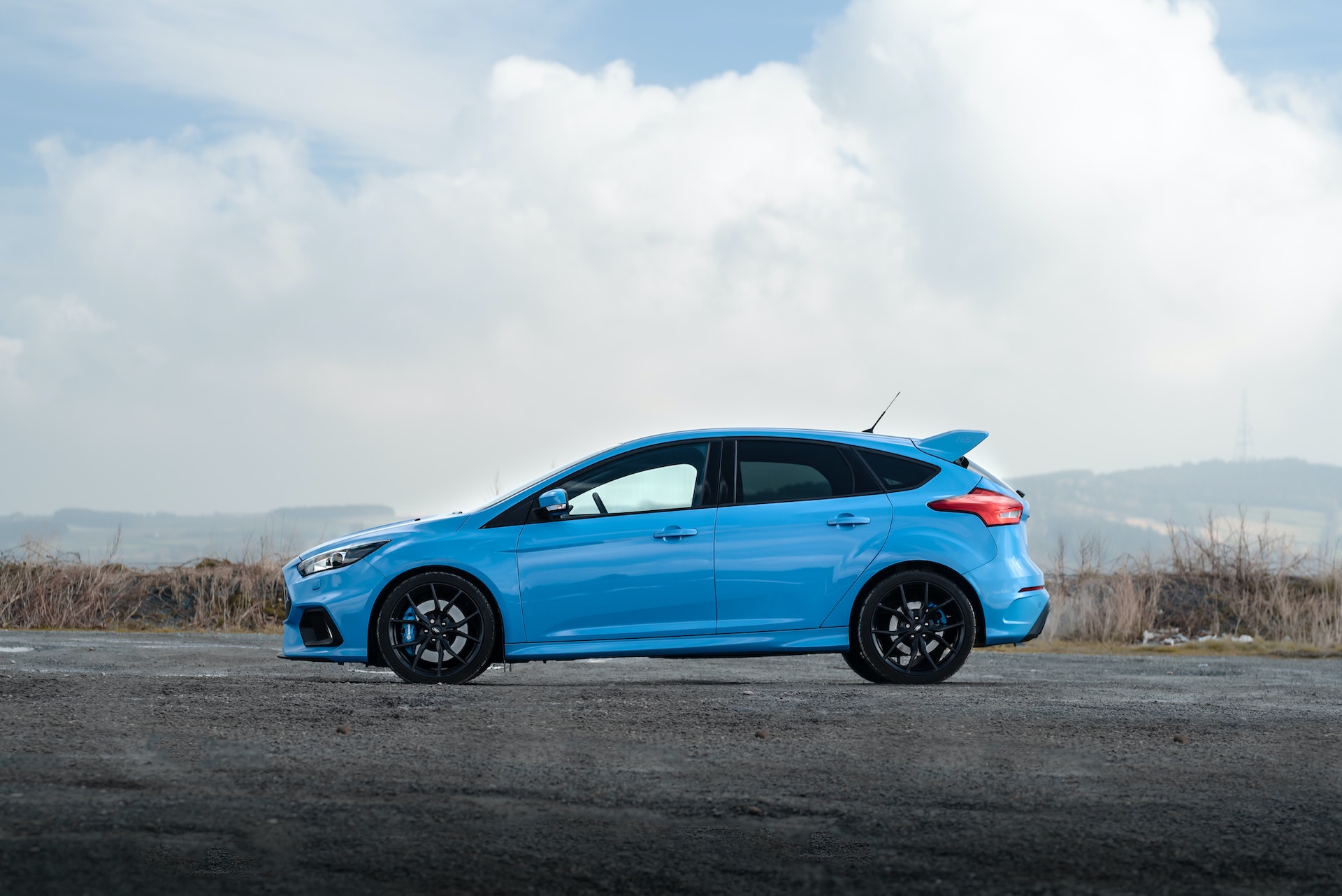 Shortly after its purchase, the vendor decided to have the Mountune upgrade installed. In January 2017, Evans Halshaw Ford supplied and fitted the Ford Performance Mountune 375 kit, which includes a high-performance air filter, bespoke alloy crossover duct, FPM375 ECU calibration, and an uprated re-circulation valve. The car was also fitted with a Mountune gear knob, FPM badge and Mountune mud flaps. The front flaps are on the car, but the rear flaps are still in their box, safely stowed in the owner’s garage, and will accompany the car when sold. This official aftermarket upgrade does not affect the Ford warranty. 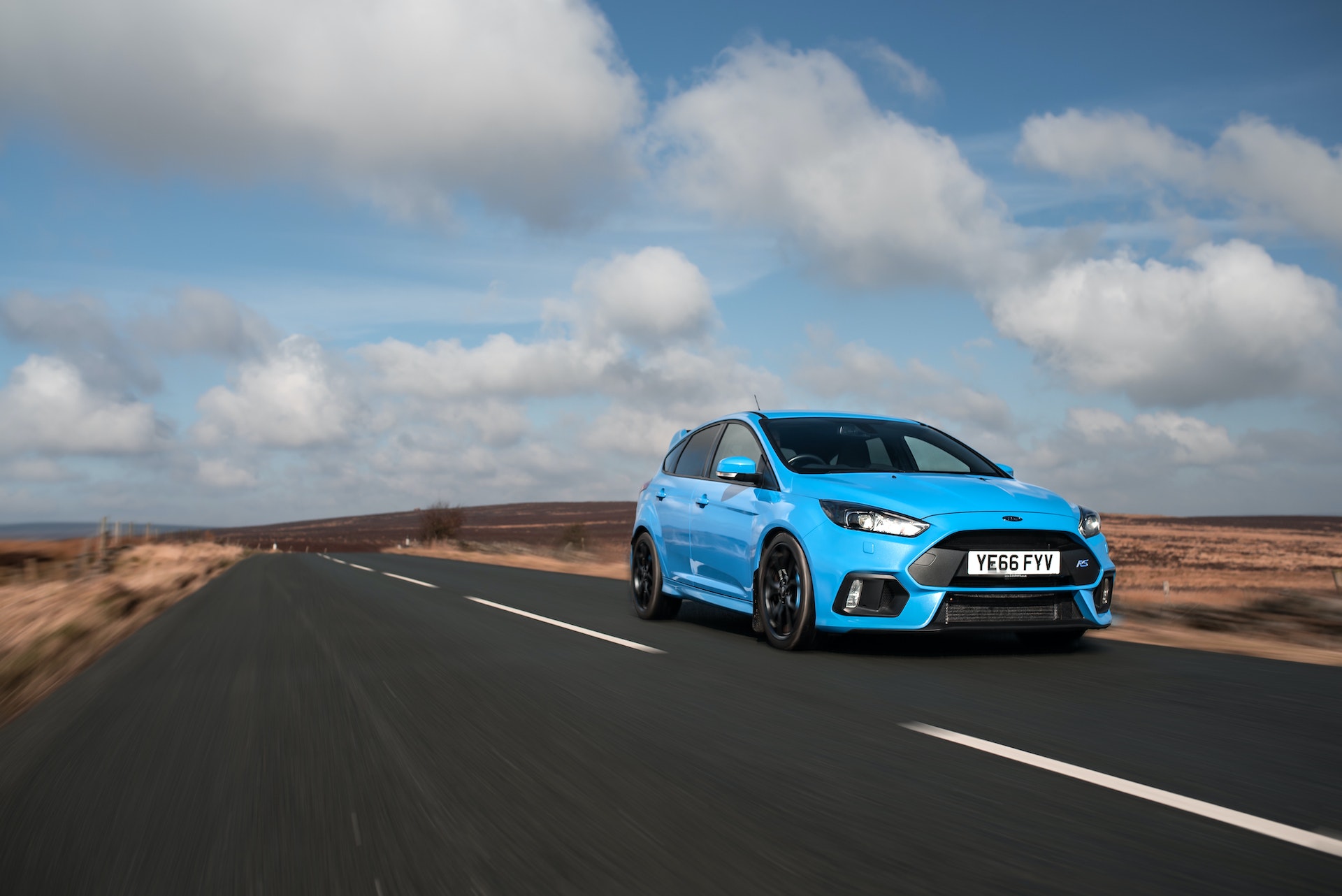 The Nitrous Blue paintwork — a £745 extra option — is described as being in excellent overall condition, with just a few very small stone chips to the nose being the only noticeable marks. Otherwise, the bodywork and exterior trim is in very good order. The grille has a secondary air intake below and a pair of inlets on either side, with the blue RS badge to the left of the number plate. At the rear, two exhaust pipes protrude from either side of the diffuser, with the lofty rear wing fitted on the tailgate. 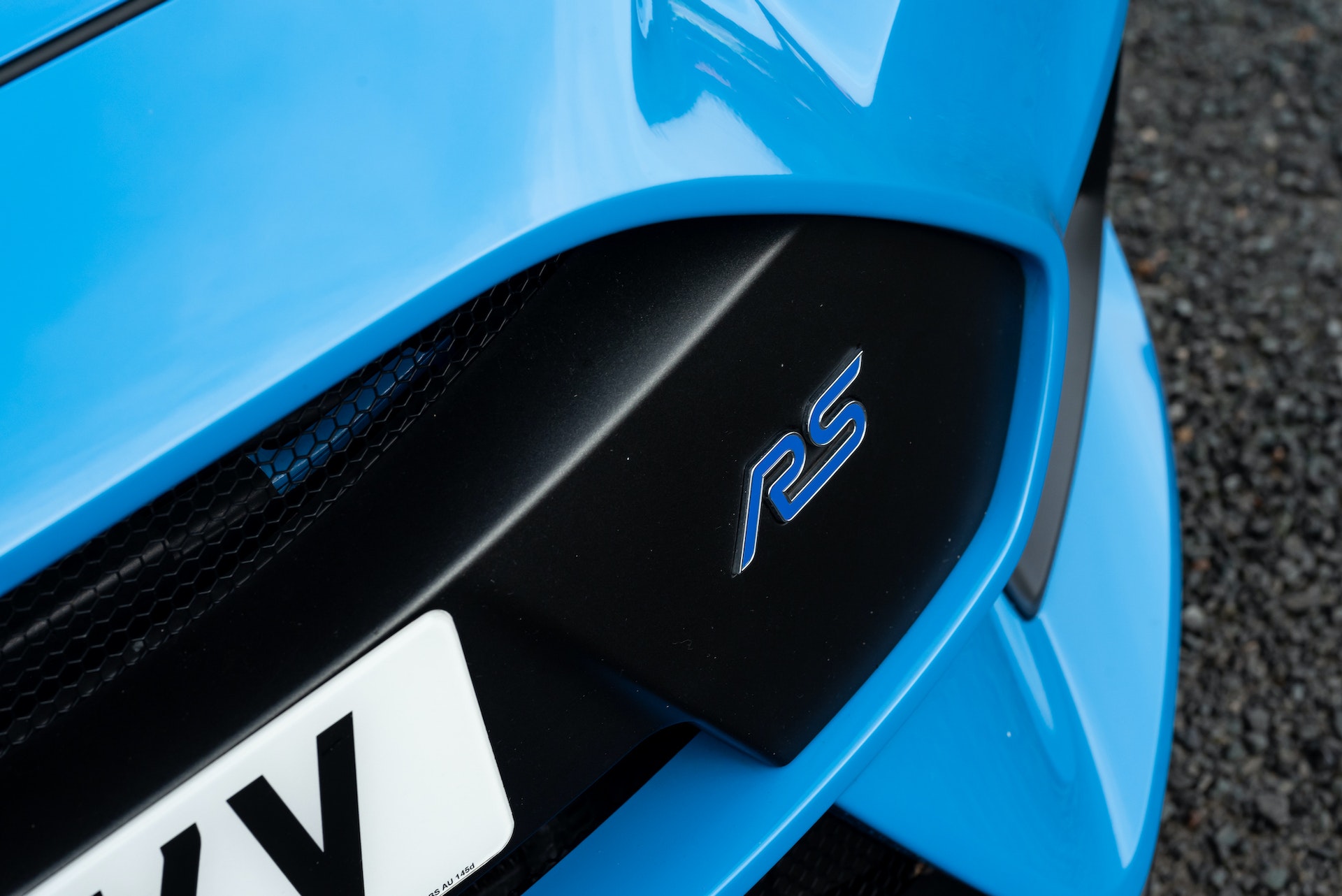 The door jambs, bonnet and boot shuts are in great condition. The car sits on the optional 19-inch black forged alloy wheels, three of which are in excellent condition and one has a minor kerbing mark. The Nitrous Blue Brembo brake callipers peek out behind the wheels, and the alloys are shod in 235/35 ZR19 Michelin Pilot Super Sport tyres all round. 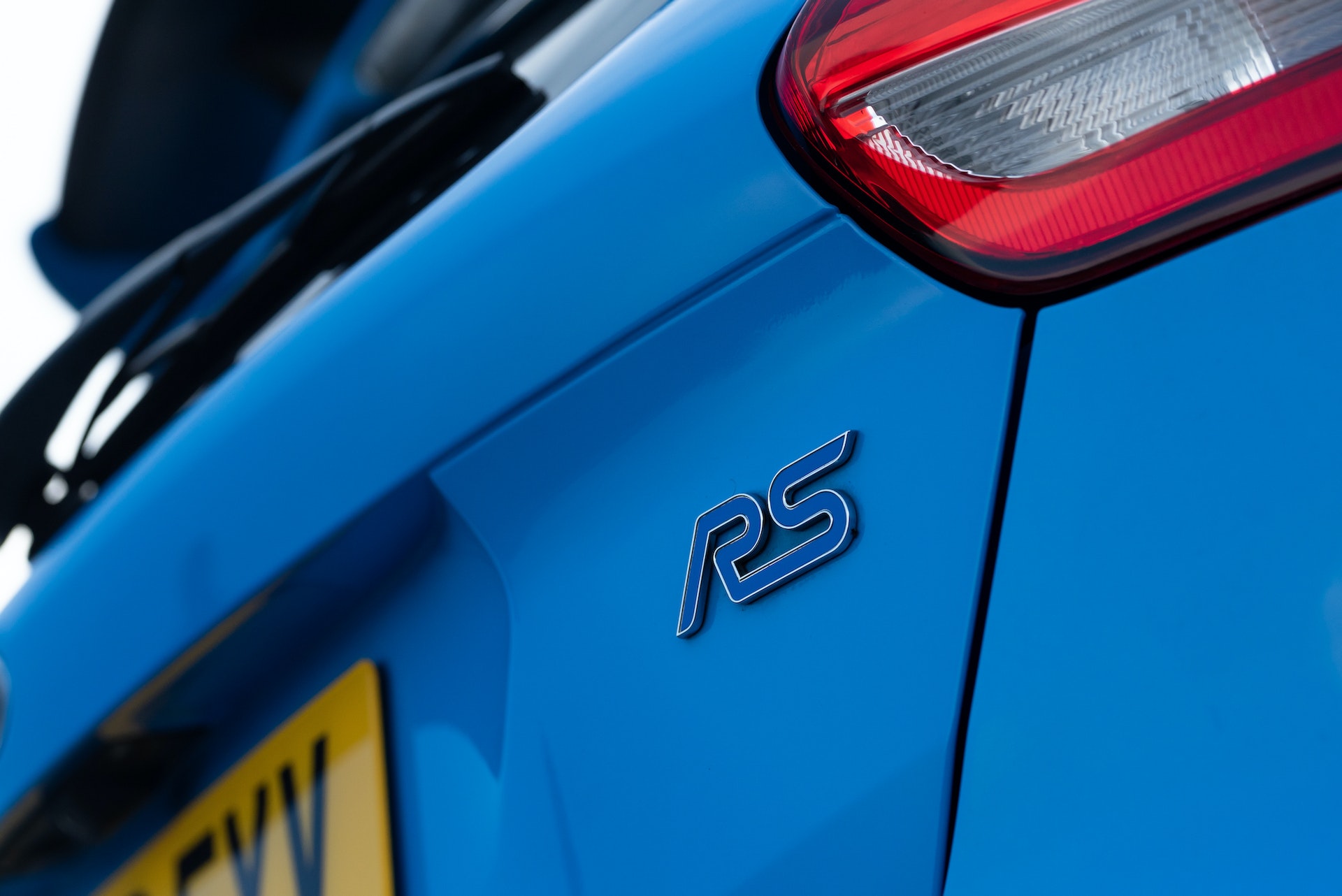 Inside, the cabin features an eight-inch touchscreen on the centre console, a nine-speaker Sony stereo system, Ford’s SYNC 3 voice control system, twin neon-needle dials, a large trip display and two auxiliary gauges in the instrument cluster. There is also a ‘Drive Mode’ button next to the gear lever, which allows the driver to choose from four distinct calibrations of the AWD system, suspension, steering, engine response, exhaust valve, and stability control system. 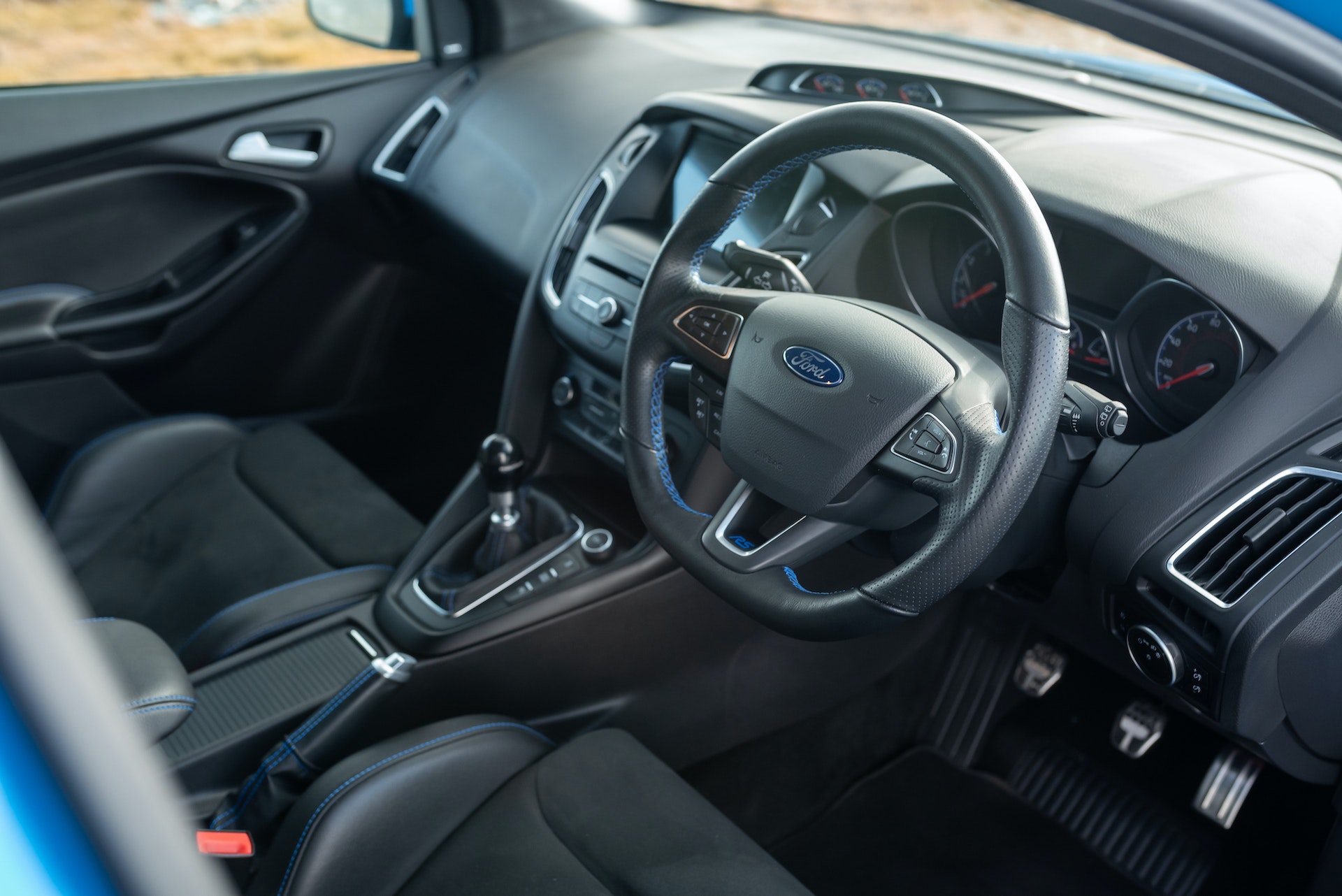 It was specified new with the optional black Dinamica micro-fibre and leather Recaro race seats, which are described as being in excellent condition, with just a scuff or two found on the headrests, and featuring the ‘RS’ logo embroidered on them. In the all-black cabin, a pop of colour can be found throughout in the form of contrasting blue stitching on the Recaro seats, steering wheel, hand brake, gear shift casing and centre armrest. 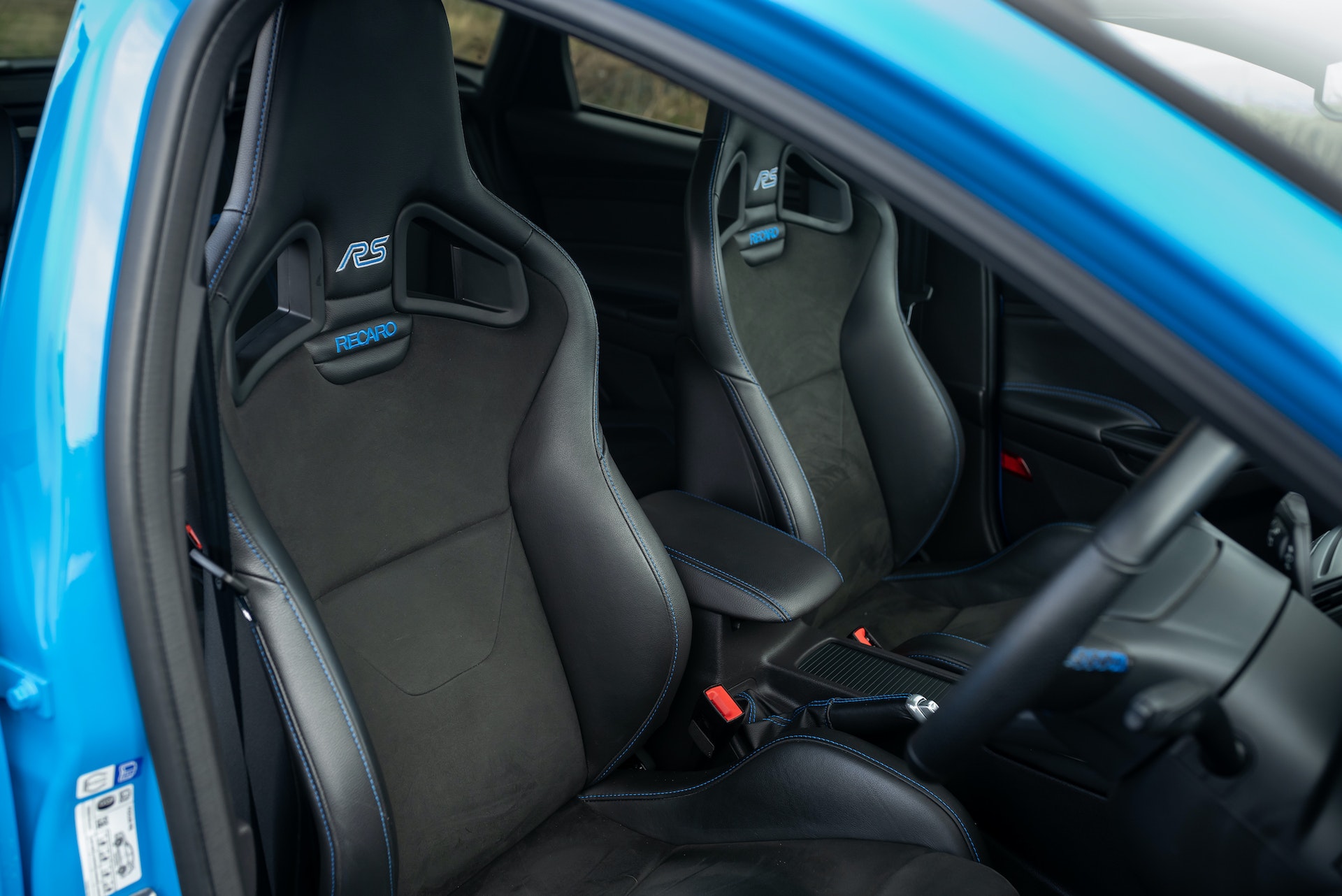 The back seats present superbly, and the black carpets are clean and appear to be unmarked. The door cards are in good condition, and the kickplates don’t seem to show any marks. The boot is tidy, with a rubber mat protecting the original carpet. 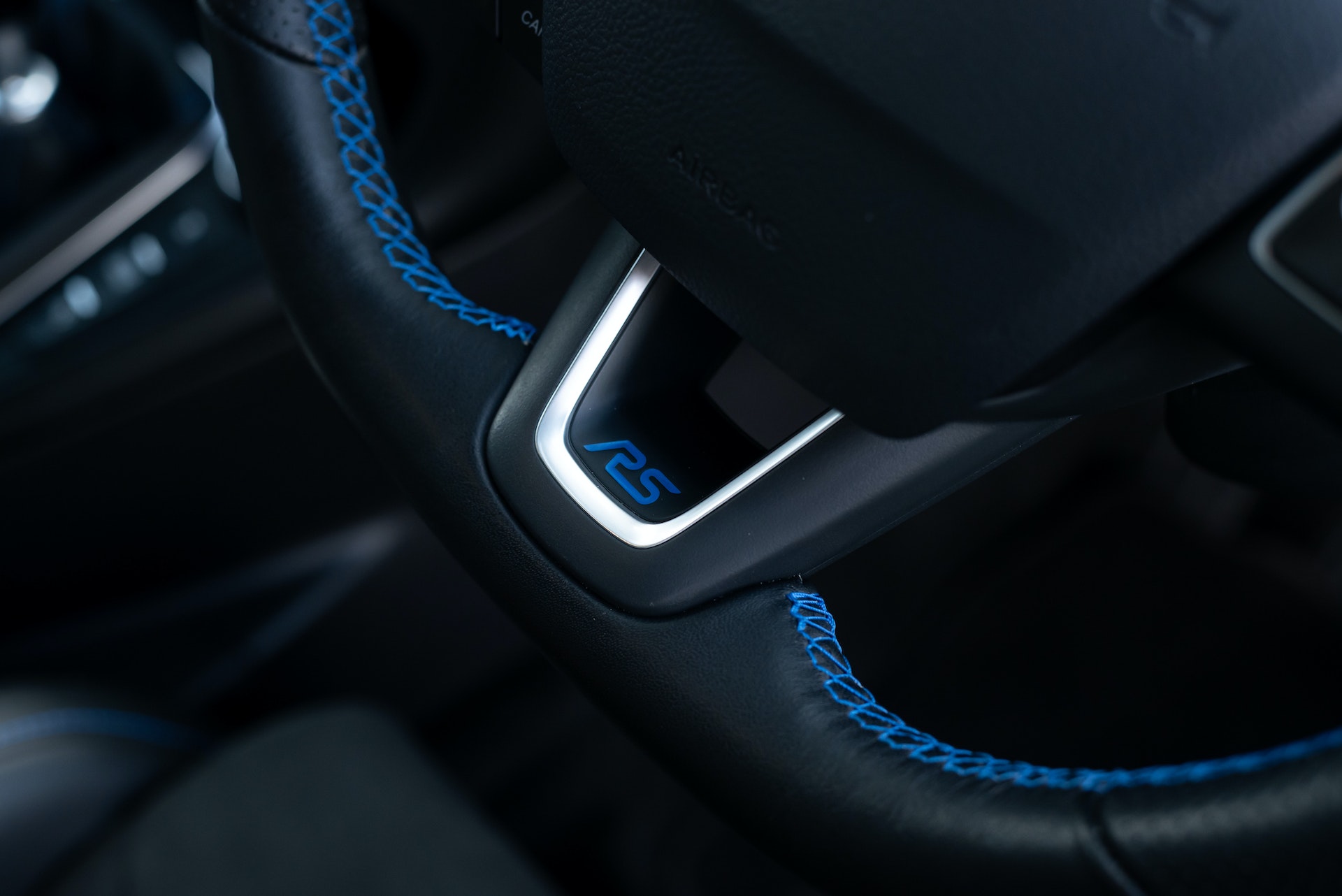 The chassis and suspension mountings are described as being in excellent condition, and the car starts, runs, and drives very well. Its first MOT test was in October 2019, which resulted in a clean pass with no advisories or warnings. The car has been serviced annually since new — on 16 October 2017 at 5,468 miles, on 15 October 2018 at 7,957 miles, and on 16 October 2019 at 9,544 miles — all by Lookers Ford Leeds. In October 2018, the car had the head gasket replaced due to a recall, with the work performed by Addison Motors Ltd. 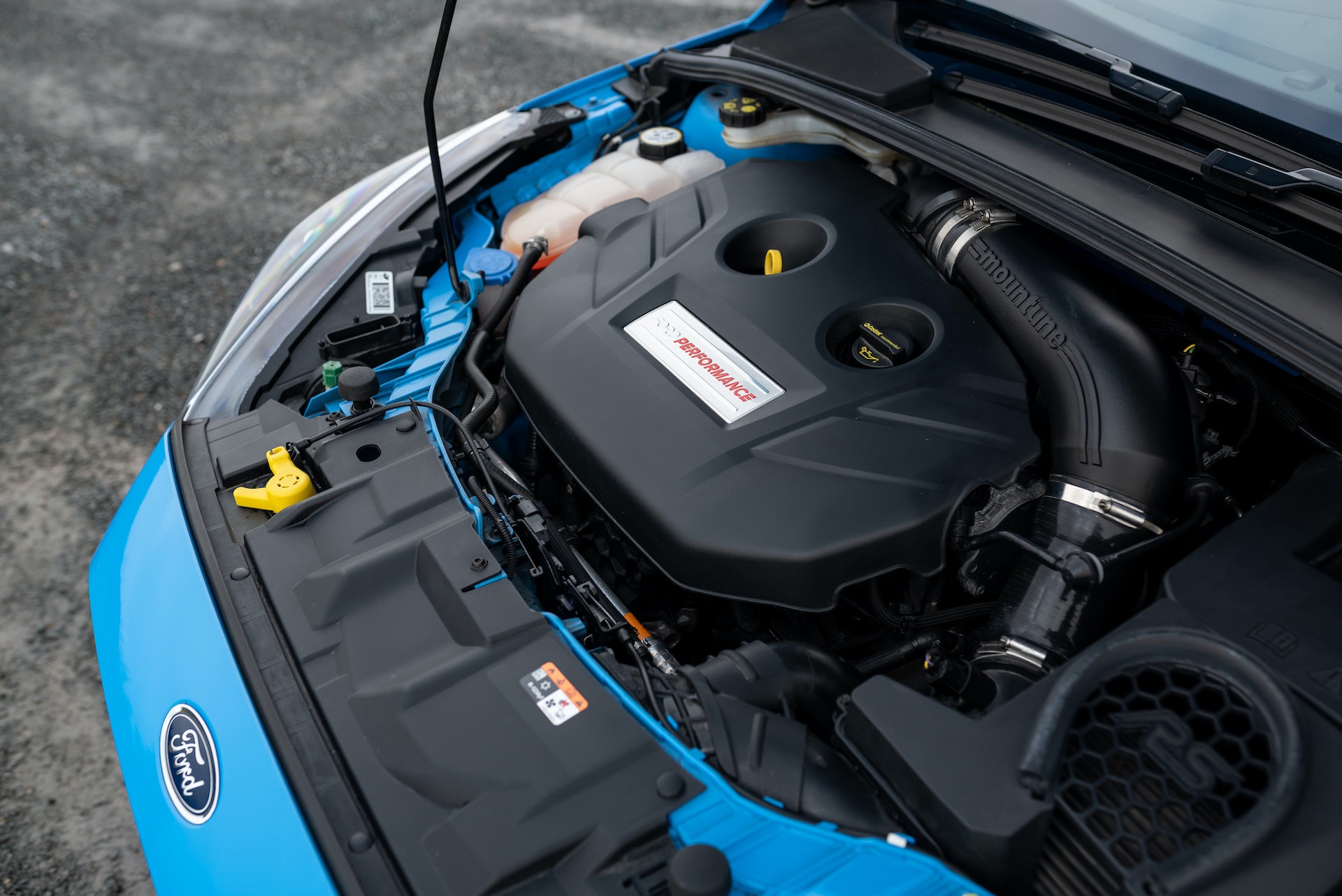 The car is accompanied by the leather ‘Ford Performance’ manual wallet, with books and supplements included, stickers from the manufacturer and various magazines that make reference to the Focus RS. 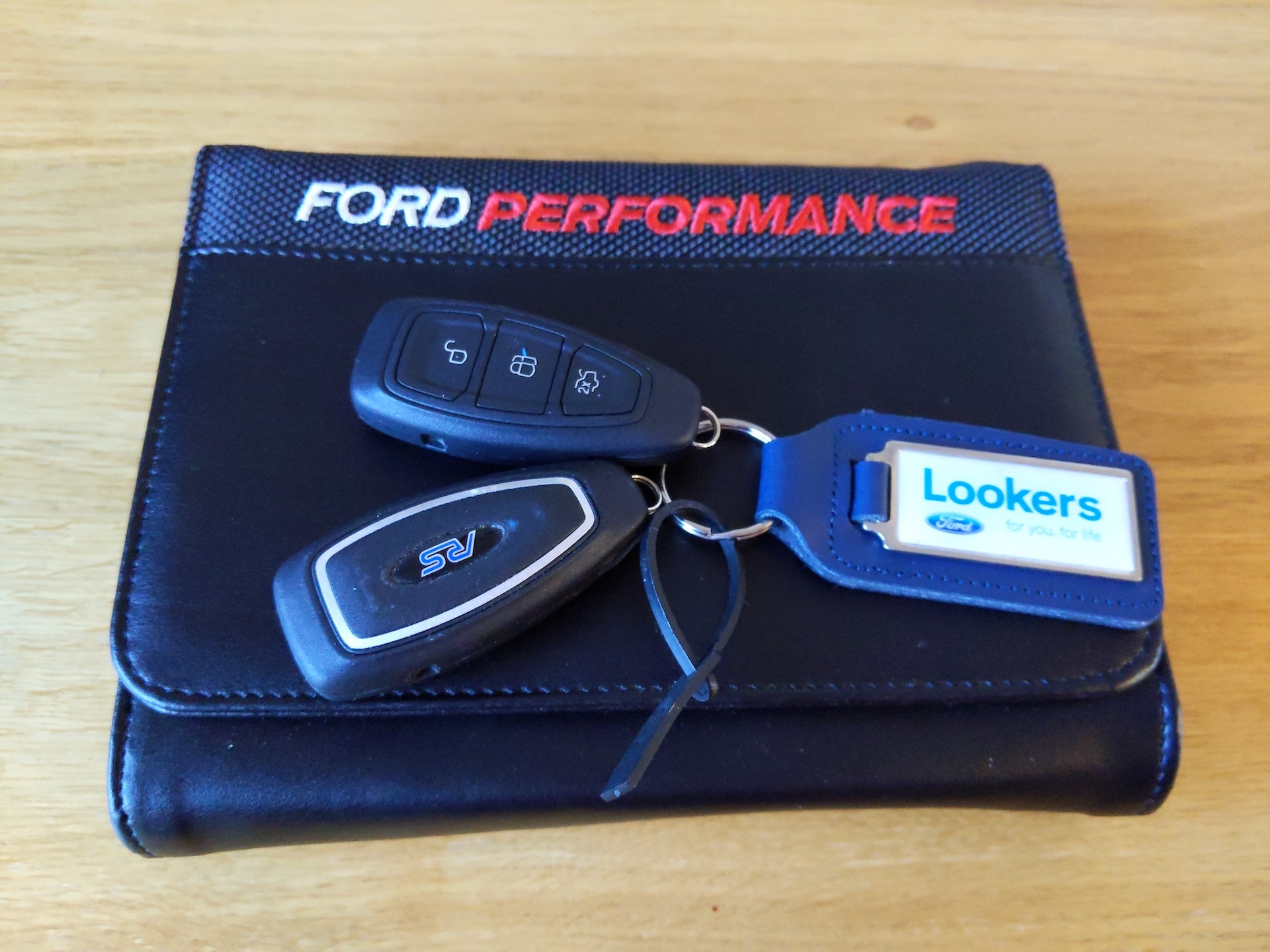 When it comes to motoring writers, few are harder to please than Jeremy Clarkson, and even he was bowled over by this landmark hot hatch: “Well, with the new Focus RS, Ford has bitten the bullet. It has locked the accountants in a cupboard and bought the tooling. It has fitted four-wheel drive, and you know after about 100 yards that it has created something very special. Even at James May speeds, on a roundabout in Hounslow, this car feels cleverer than is normal.” 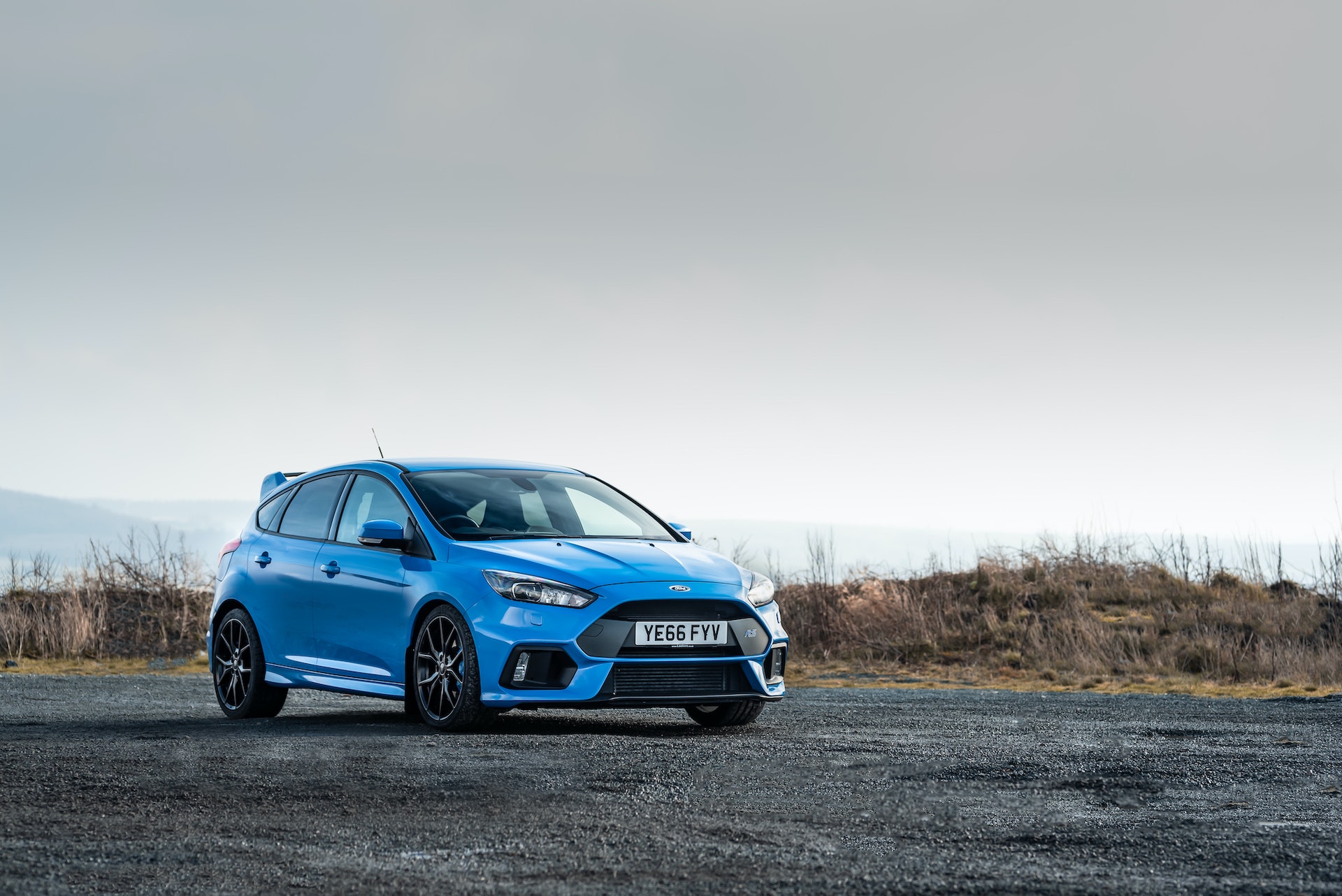 This Ford Focus RS is a superb, very low-mileage example of one of the most celebrated hot hatches of the modern era. It is fitted with a host of desirable factory options, remains in excellent cosmetic order, and boasts full annual service history from new. With incredible pace, remarkable handling, and benefitting from the approved Mountune upgrade, this is an opportunity not to be missed.