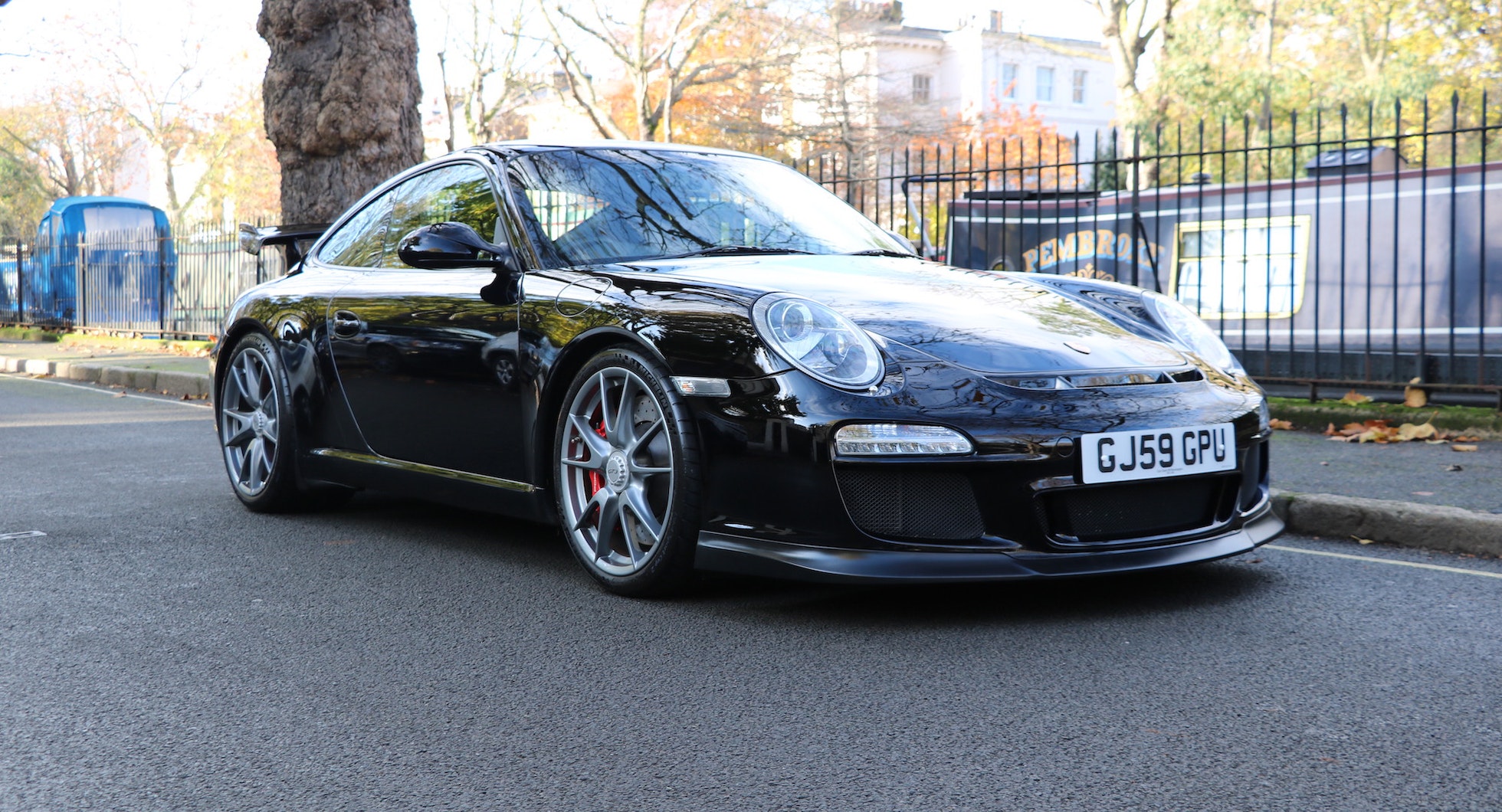 This 2010 Porsche 911 (997) GT3 is a very smart example of one of the most engaging and exciting versions of everyone’s favourite flat-six. Its 3.8-litre engine starts and runs smoothly, driven through a six-speed manual transmission. Now showing just 32,000 miles from new, it is registered in the UK and ready to be enjoyed on the road immediately. 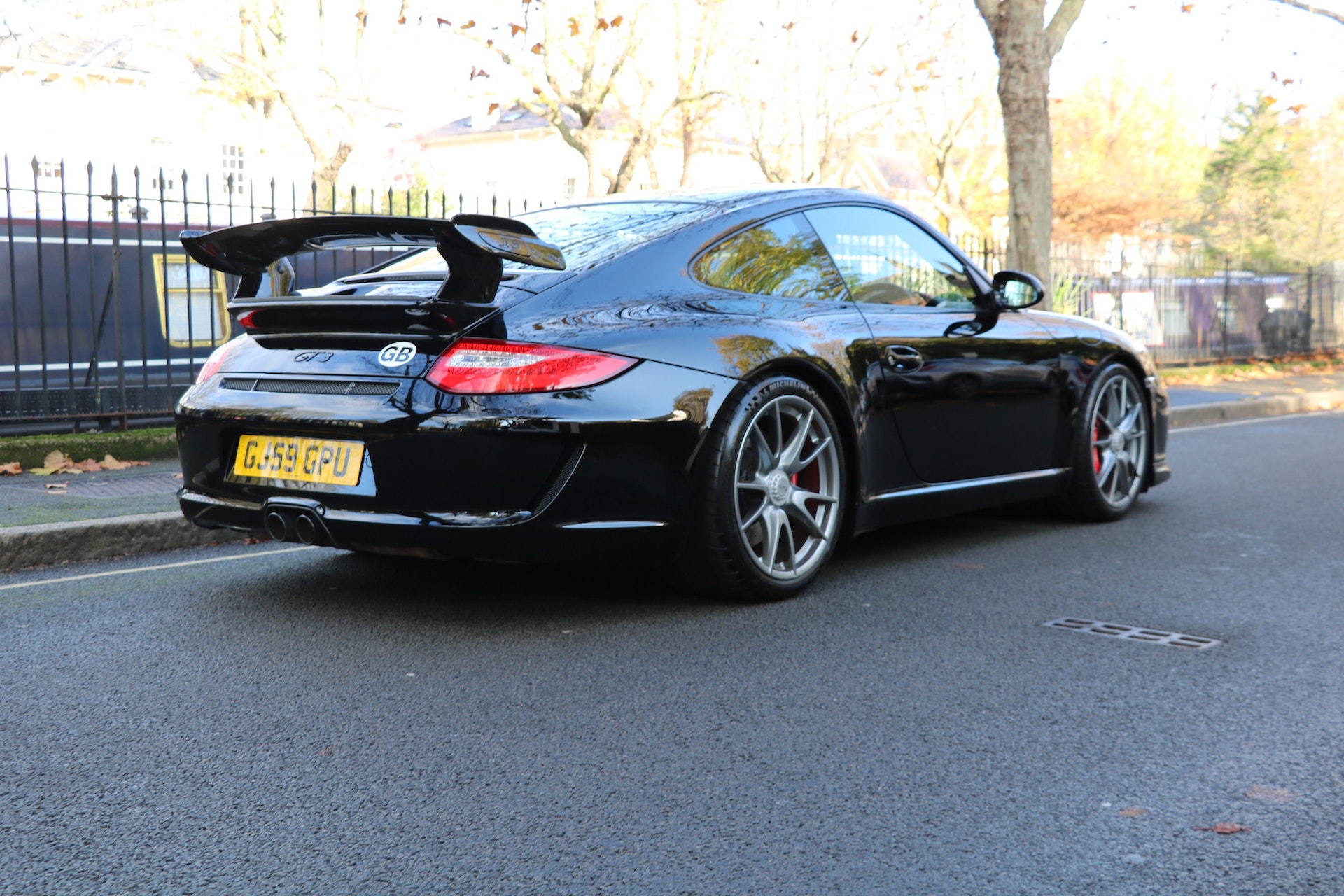 Owned by the vendor for seven-and-a-half years, this 997 GT3 is a right-hand drive example that was originally supplied via Porsche Centre Tonbridge. It was first registered on 2 January 2010 and had two previous keepers before the car was purchased by the vendor. It has evidently been well-maintained by these owners over the years, as it still presents well and performs strongly today. 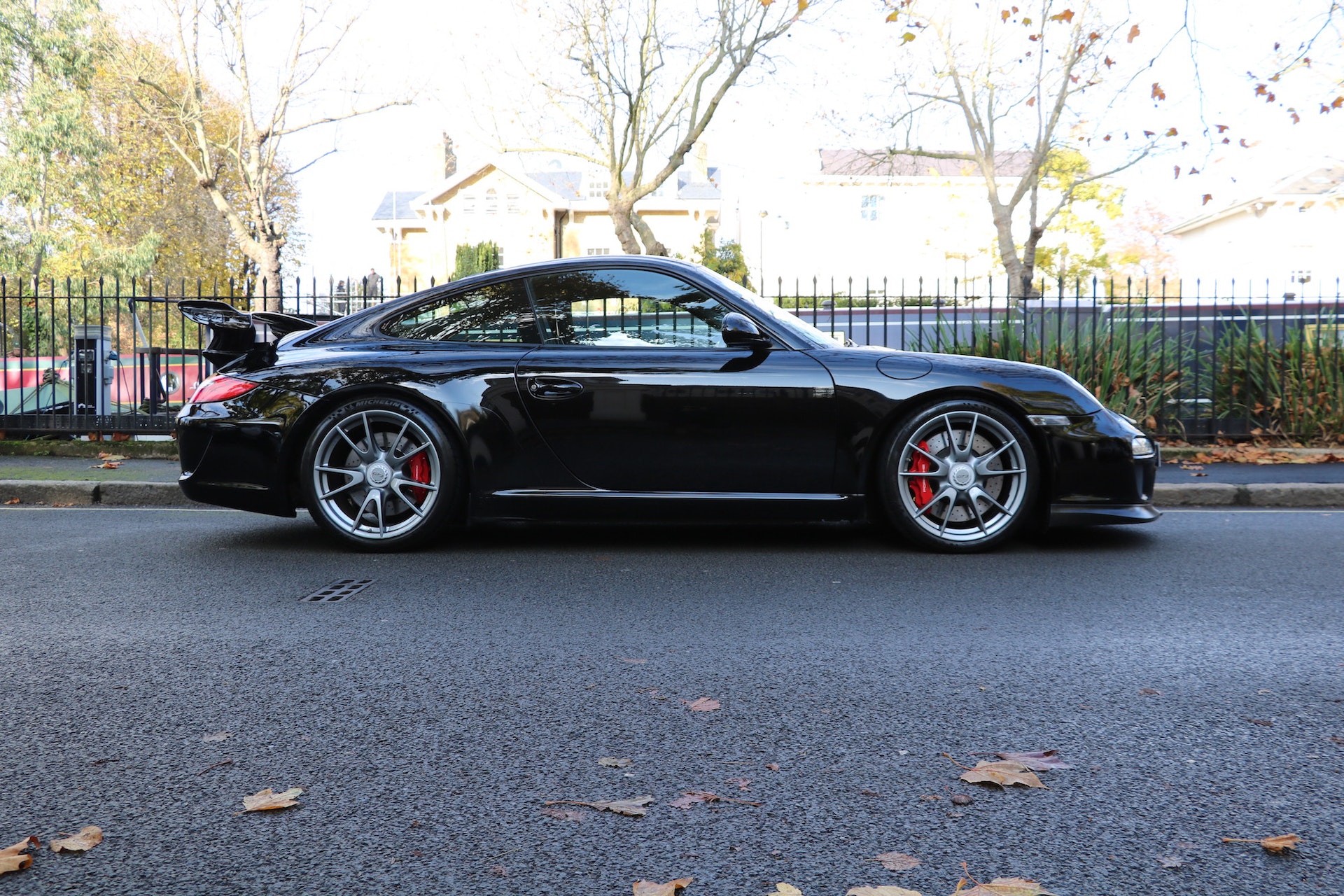 The black paintwork is described as being in excellent condition, with a deep and glossy finish. There are very few marks on the car, with the vendor noting in particular a small dent on the lower passenger side rocker panel. In addition, there is a small scratch on the driver’s side door by the key hole, some scratches on the passenger’s side kick plate, and a few stone chips on the nose, side mirrors and sills. The car’s shut lines are all sound, and the door jambs and end panels are in very good condition. 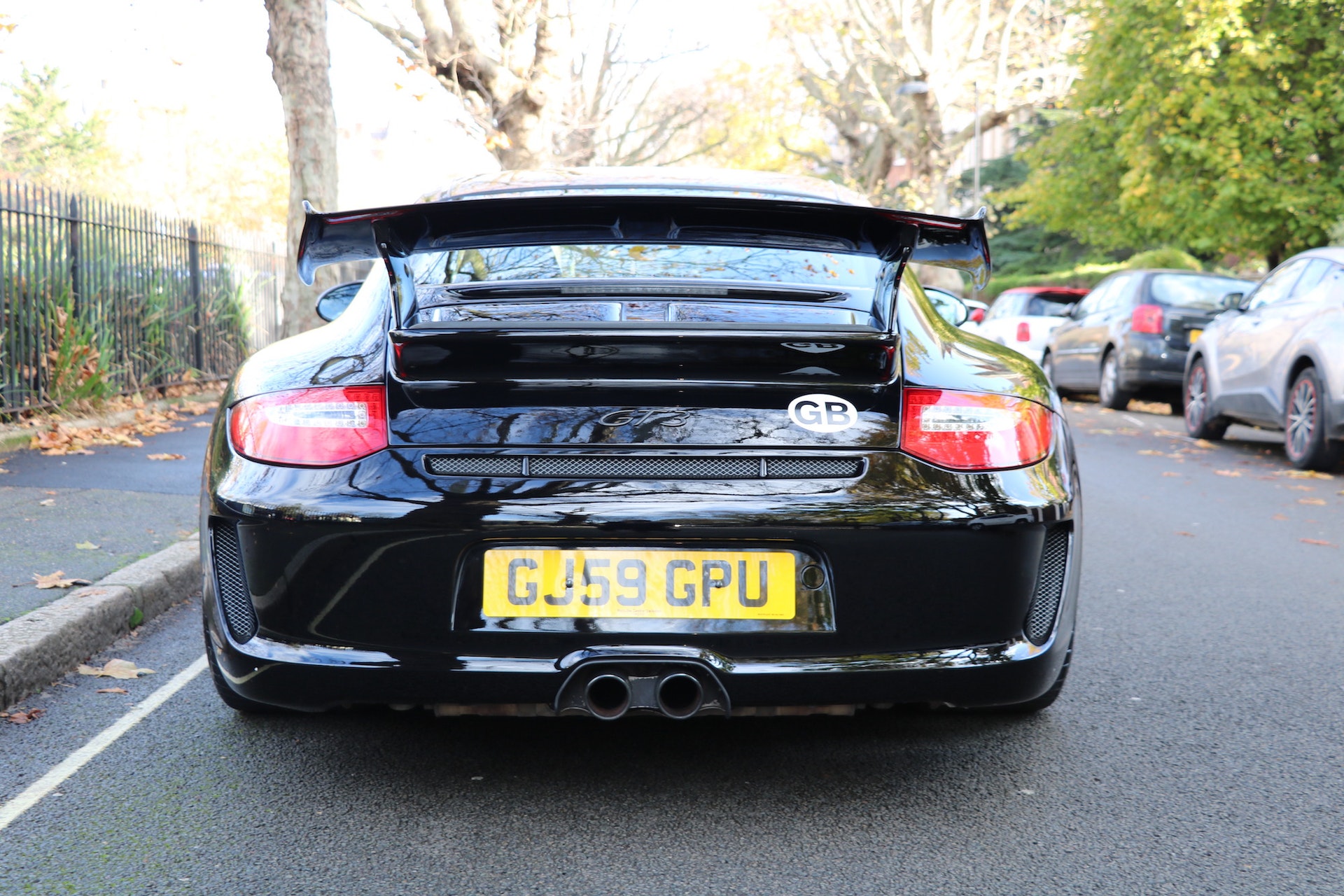 Trimmed in black, the original interior is described by the vendor as being in excellent condition, with only a small tear in the driver’s seat material. The seats are rare 997 GT2 items trimmed in Nomex fabric with carbon-fibre backs. There are a few minor scuffs around the cabin trim from use, but the dashboard, centre console, switchgear and gauges all are in great condition. Installed in the dash is an analogue clock — a feature of the optional Sport Chrono Package — which is linked to the PCM system, allowing you to view, store and compare lap/driving times. 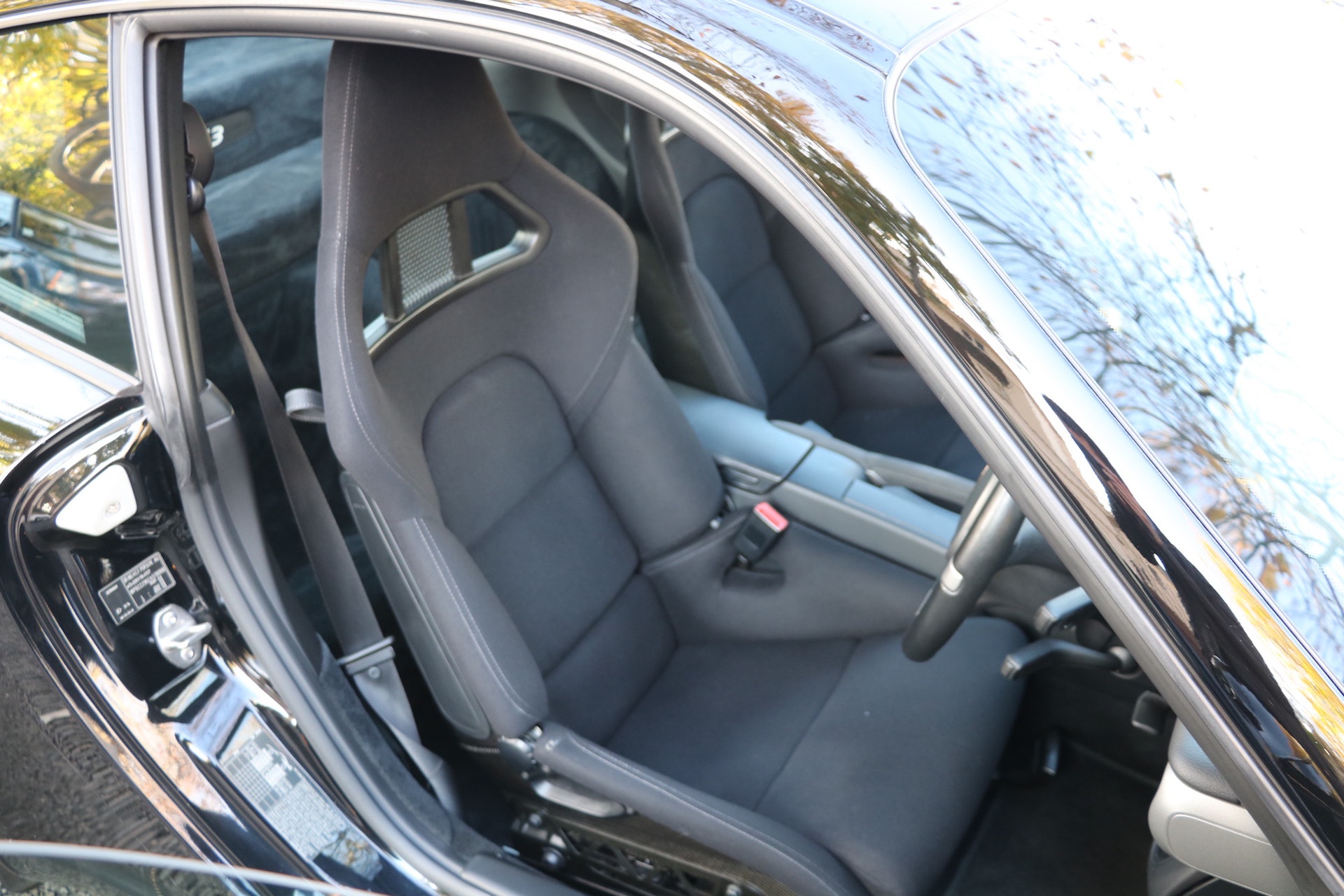 The boot is very clean, with an emergency triangle affixed and storage for the torque wrench, wheel nut and tyre sealant. A full size torque wrench also included in the sale. All of the rubber seals around the windscreen and side glasses are in great shape. 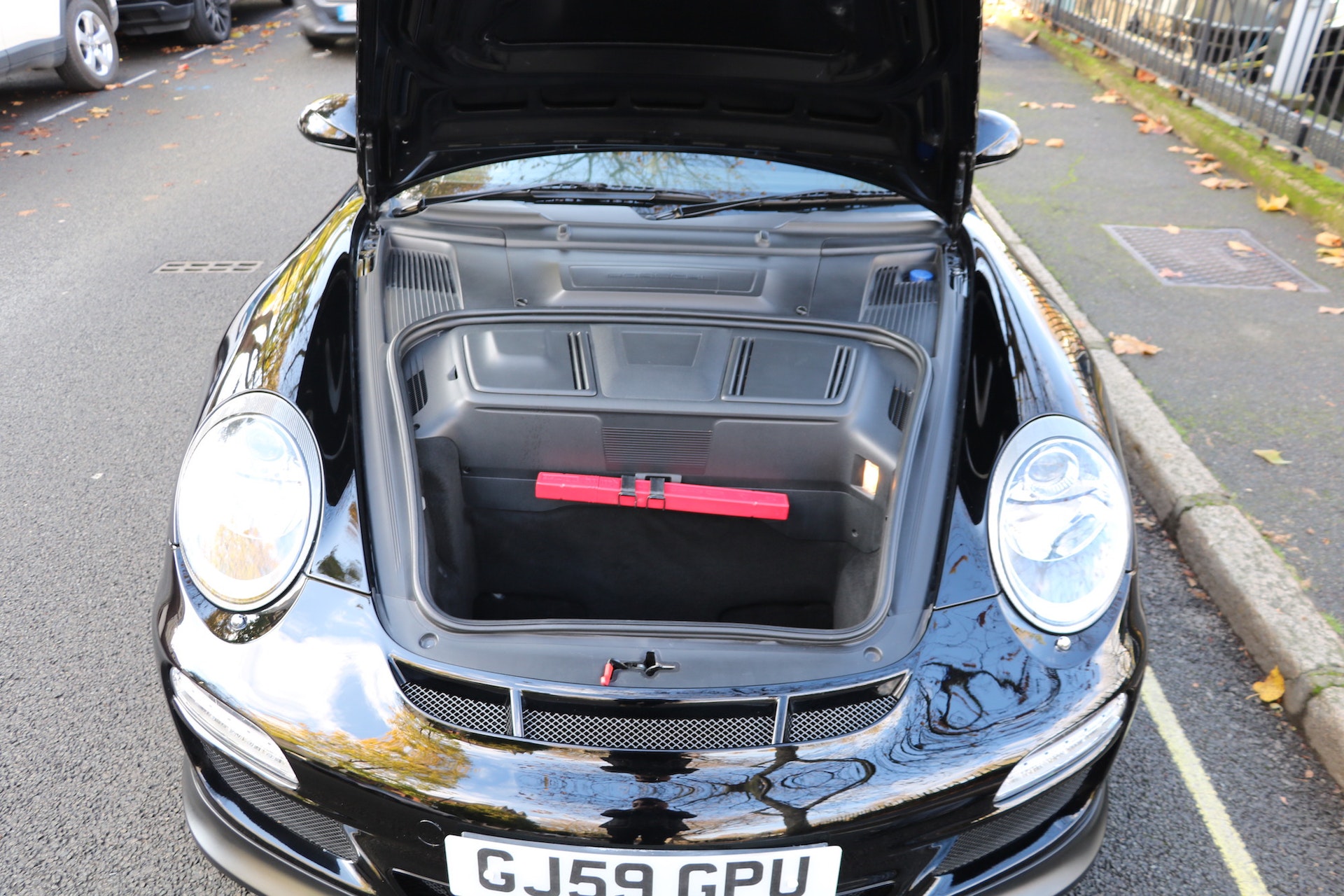 The car starts, runs and drives very well. The engine bay is tidy, and the chassis and suspension mountings are described as being in excellent condition. The 19-inch GT3 centre lock alloy wheels look fantastic; although, there are a few chips in the paintwork around the rims. The Michelin Pilot Sport Cup 2 tyres still have plenty of tread, with 4–5mm all round. 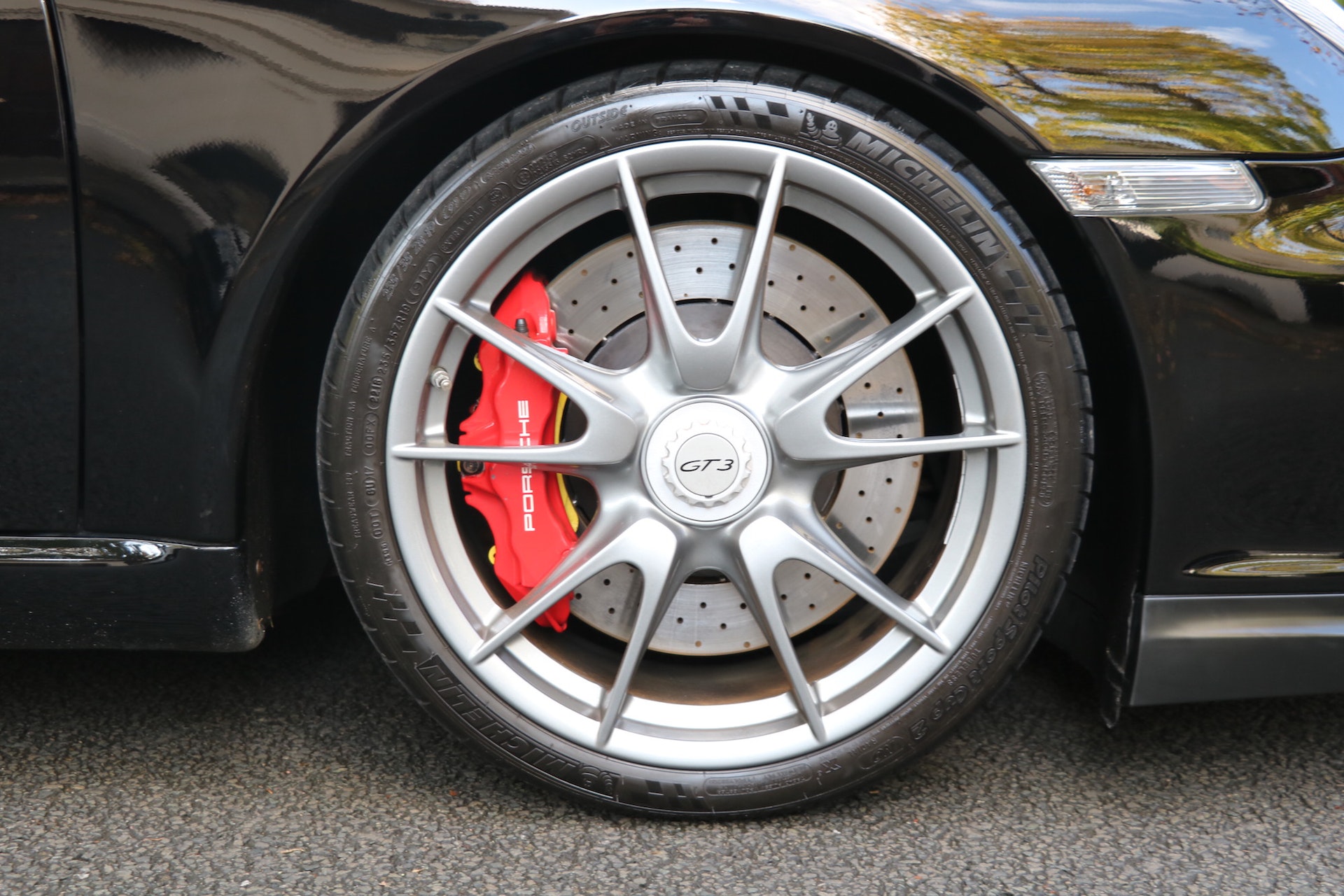 Its last MOT was on 25 October 2019, and the car passed with no faults or advisories. In fact, the car has never had a fault or advisory come up on any of its past MOT tests — clearly an indication of how well each of its owners has taken care of the car. 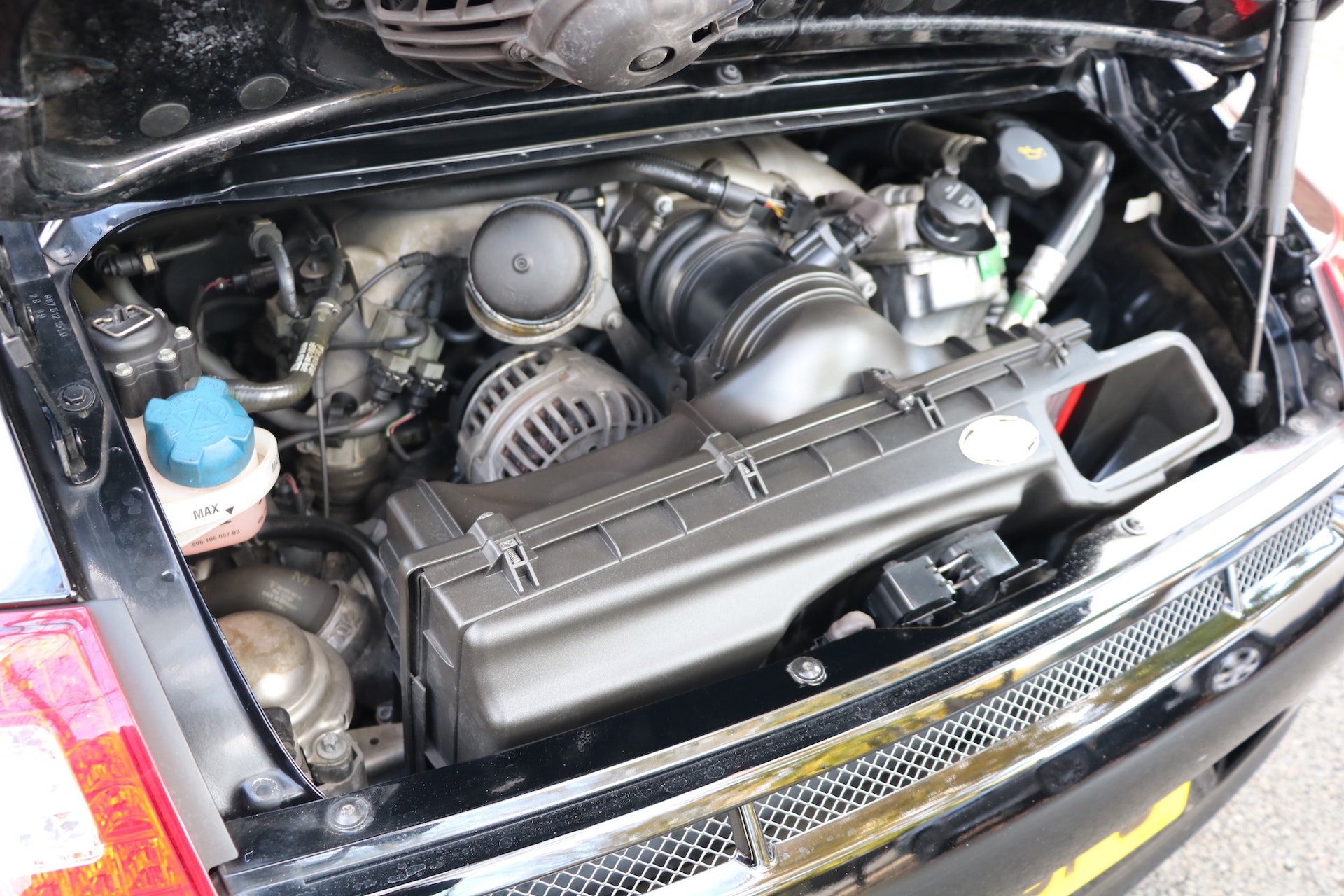 All major Porsche services have been performed by Porsche-authorised services centres, with the most recent taking place on 20 May 2019. This was the Porsche P60 service, and at this time the front axle lift kit was replaced, and the filters and oil were changed. The Porsche P40 service took place on 18 December 2015 and the Porsche S40 on 18 December 2013. All other maintenance and non-major services were performed by Car Care of Kensington and JZM Porsche, which included such work as repainting the front end and replacing the clutch. 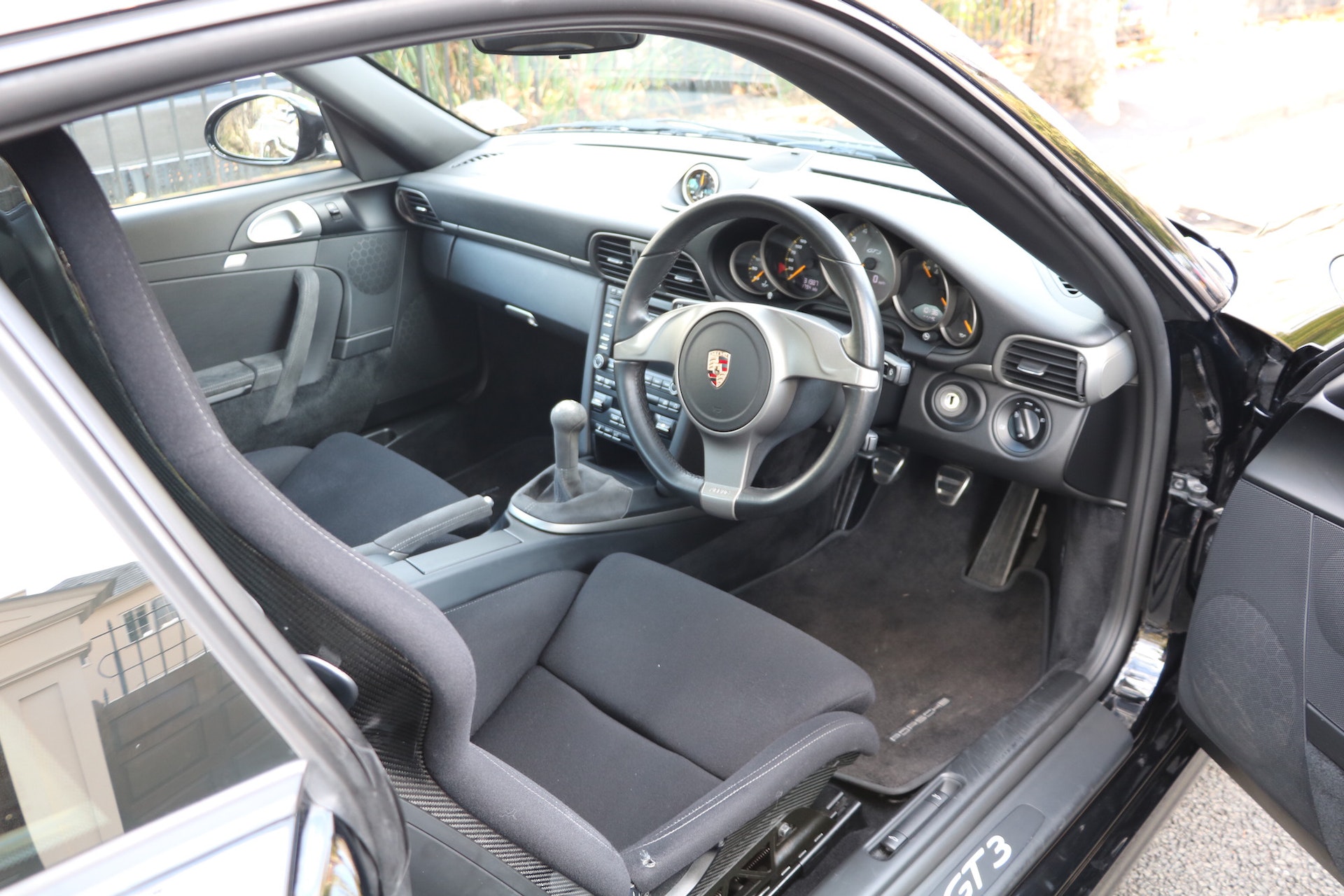 The vendor describes the 997 GT3 as “fantastic to drive — visceral and precise with great visual appeal”. And Evo magazine agrees: “[The 997 GT3 is] one of the best drivers’ 911s ever — fantastically tactile, irresistibly engaging and fitted with one of the most thrilling flat-sixes Porsche has ever built. Far from detracting from the experience, the standard fitment of adaptive suspension, traction control and air-conditioning all add to its appeal — PASM allows it to be more sporty on track, TC offers a (switchable) safety net, and 20kg is a modest penalty to pay for the benefits of air-con. In fact, the fitment of lightly treaded ‘trackday’ tyres makes it the most uncompromising GT3 there has been. Dry-road grip is exceptional, but in the wet you’ve got to tread very cautiously. Yes, you can specify it with creature comforts such as satnav and electric seats, but don’t ever imagine it’s merely a sportier Carrera S. The GT3 has teeth, and it will bite.” 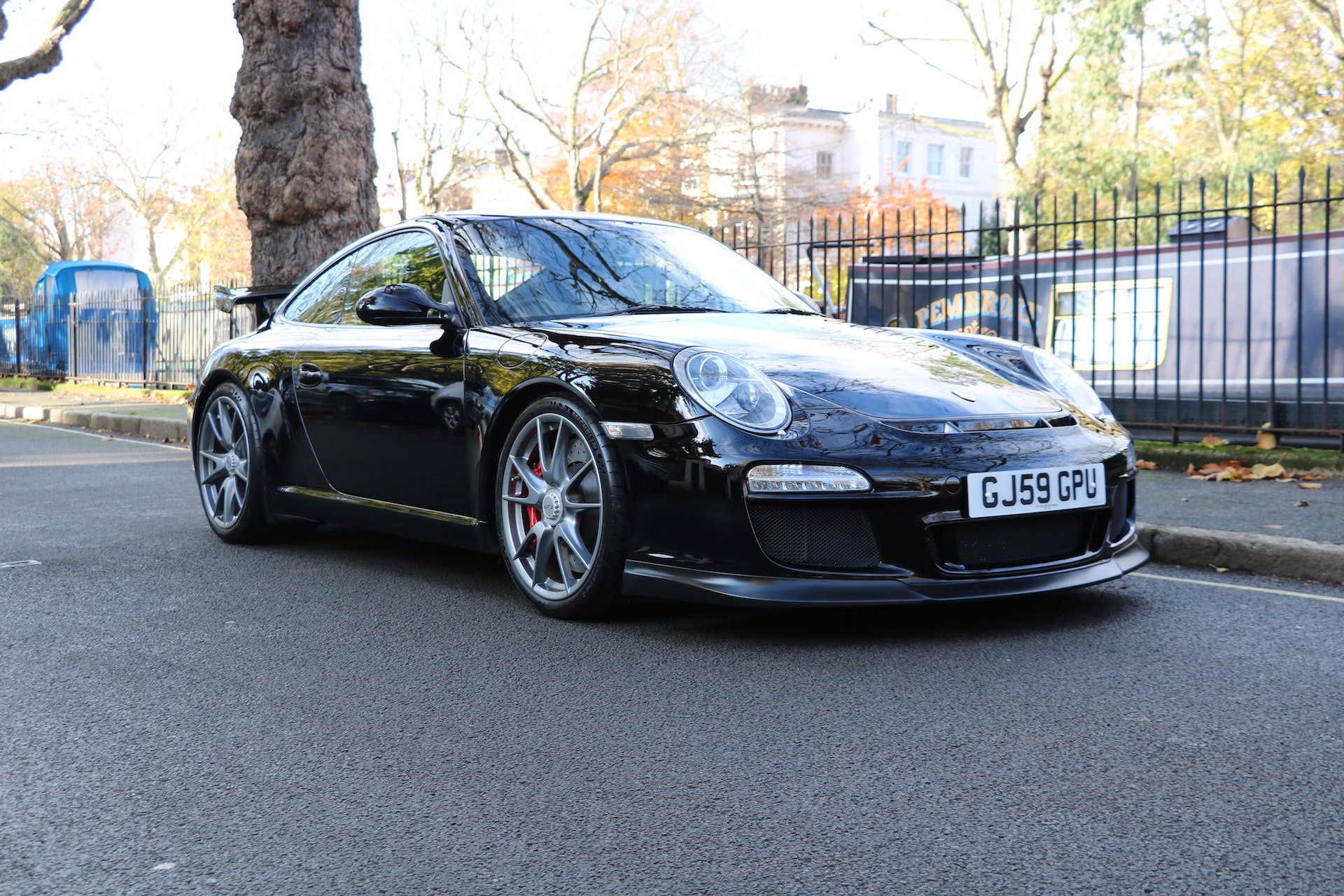 The car is accompanied by its original Porsche black leather wallet, which holds the service book and numerous instruction manuals, along with a history file of maintenance and service records. Designed and developed with the motorsport ambitions of a race car in mind, but adapted for the road, this Porsche 997 GT3 is an excellent example of a reliable and usable high-performance icon.