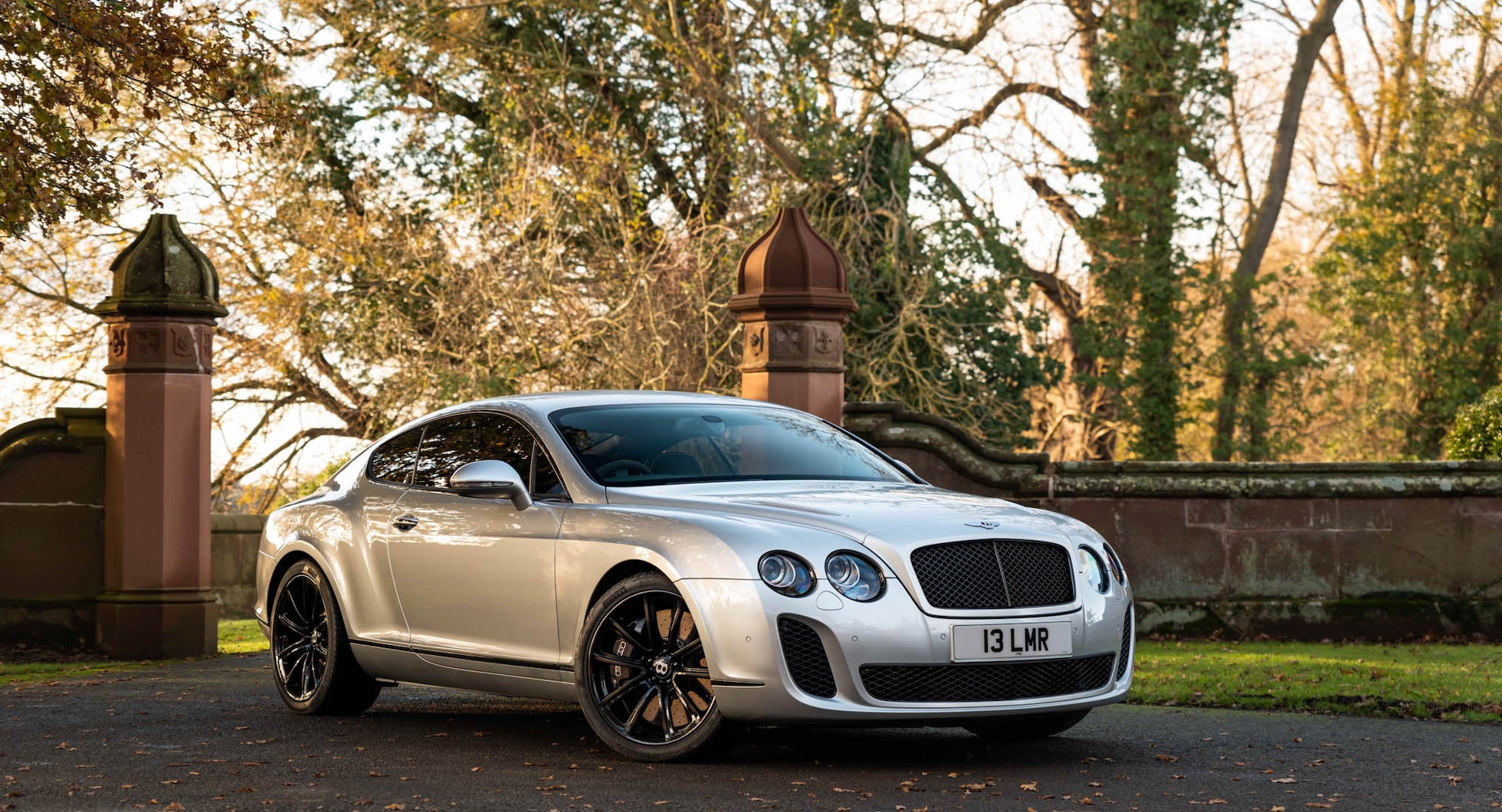 This 2010 Bentley Continental GT Supersports is an immensely impressive grand tourer, presented in outstanding condition having been impeccably maintained. It is powered by the 621bhp twin-turbocharged 6.0-litre W12 engine, driven through all four wheels via the six-speed Quickshift automatic transmission with steering wheel-mounted paddles. The car has covered 41,730 miles from new. 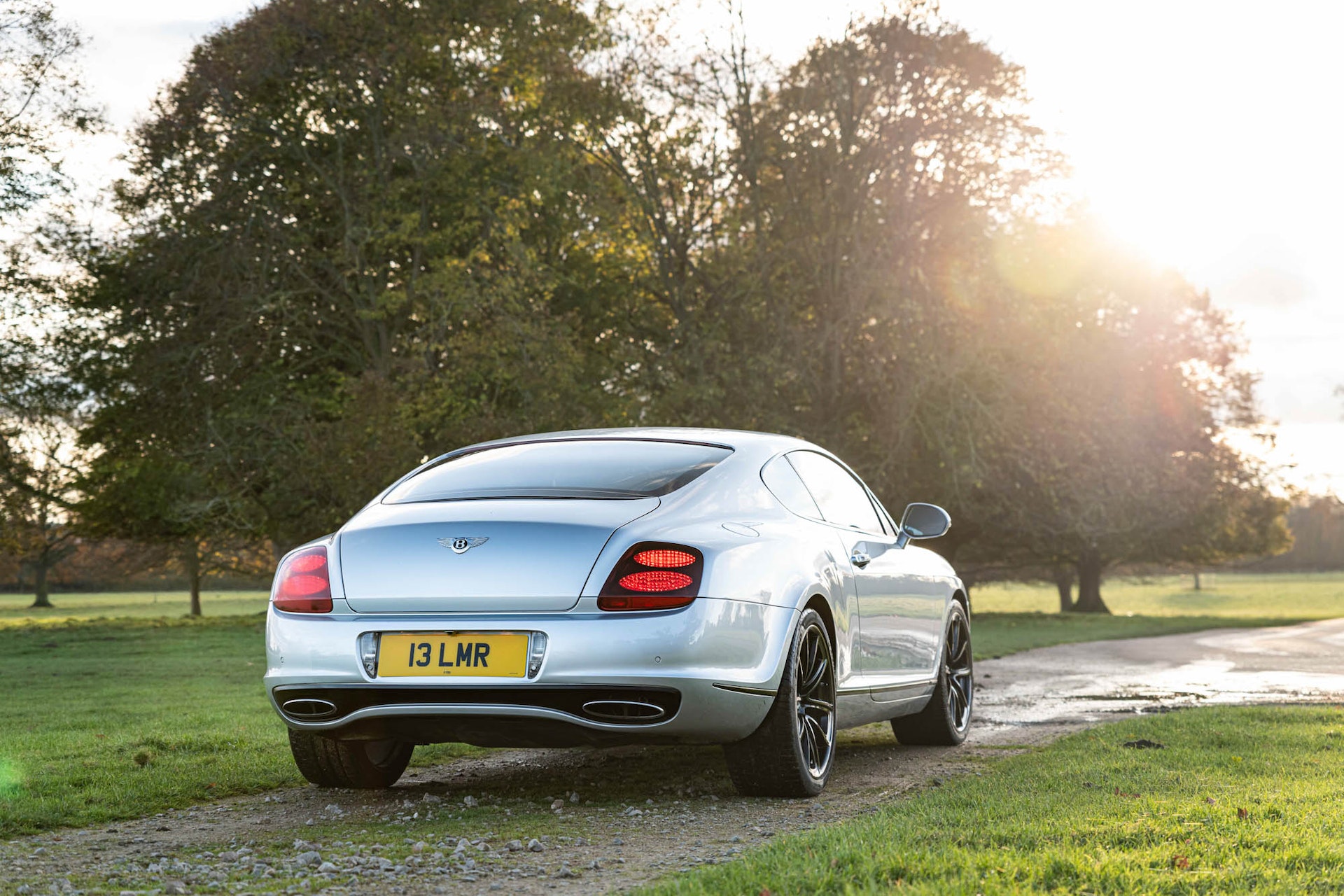 Launched in 2009, the Supersports model was the most powerful Bentley road car ever, and its chassis was tuned to deliver more focused high-speed performance. The substantial power and torque generated by the muscular W12 enabled a 0-60mph time of just 3.7 seconds and a top speed of 204mph. 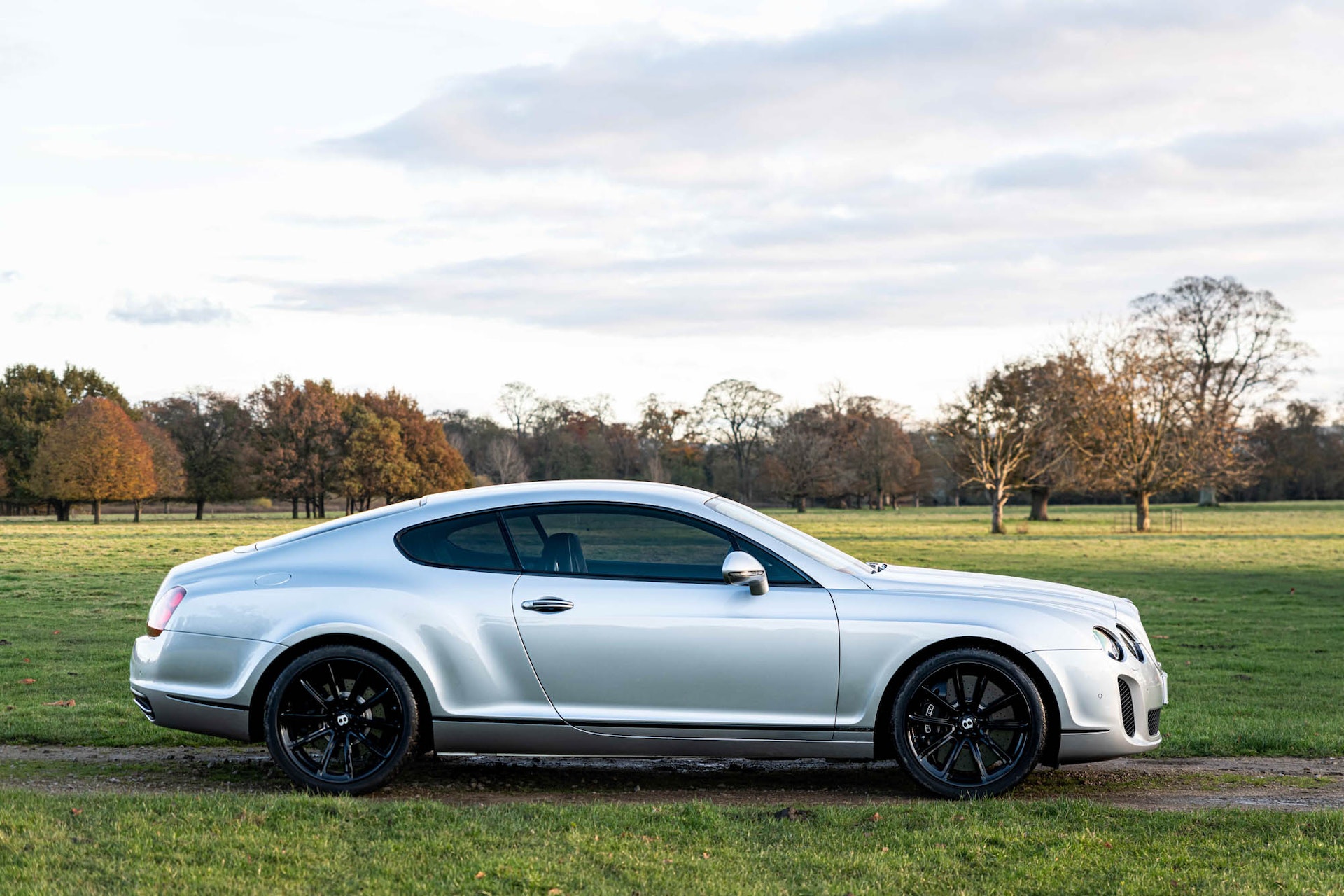 The rear track was widened, the wheel arches were pushed out by an inch on each side, and the ride height was lowered by 10mm and the front and 15mm at the back. Its most prominent upgrade at the front were the two larger air ducts, and from the side the standard carbon-ceramic brake discs could be seen through the new lightweight forged alloy wheels. 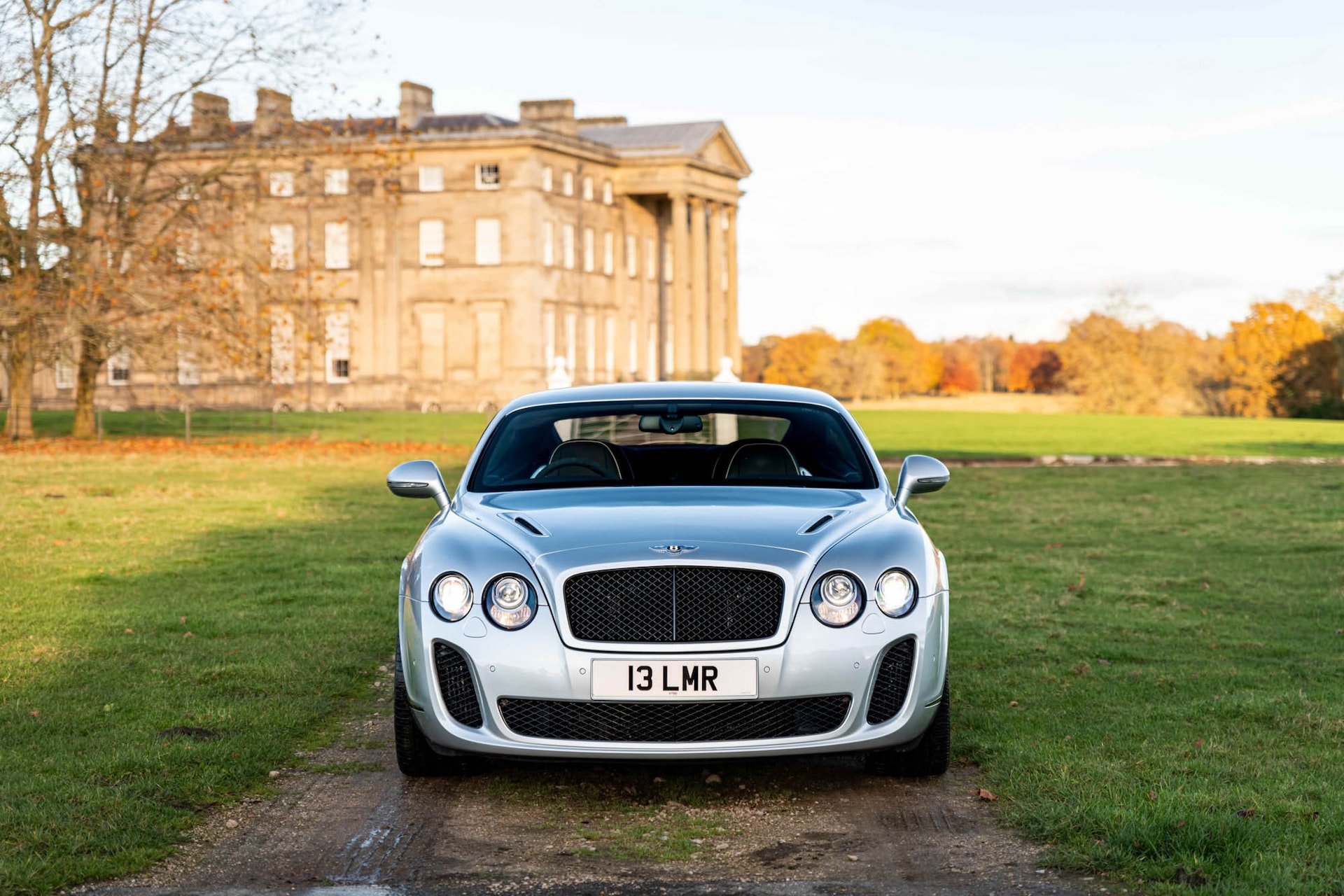 This car is an original UK-supplied right-hand drive example, first registered on 4 May 2010. It has evidently been cherished by its previous keepers, and the attentive vendor has owned the Bentley for the last three years, enjoying around 3,500 miles behind the wheel during that time. 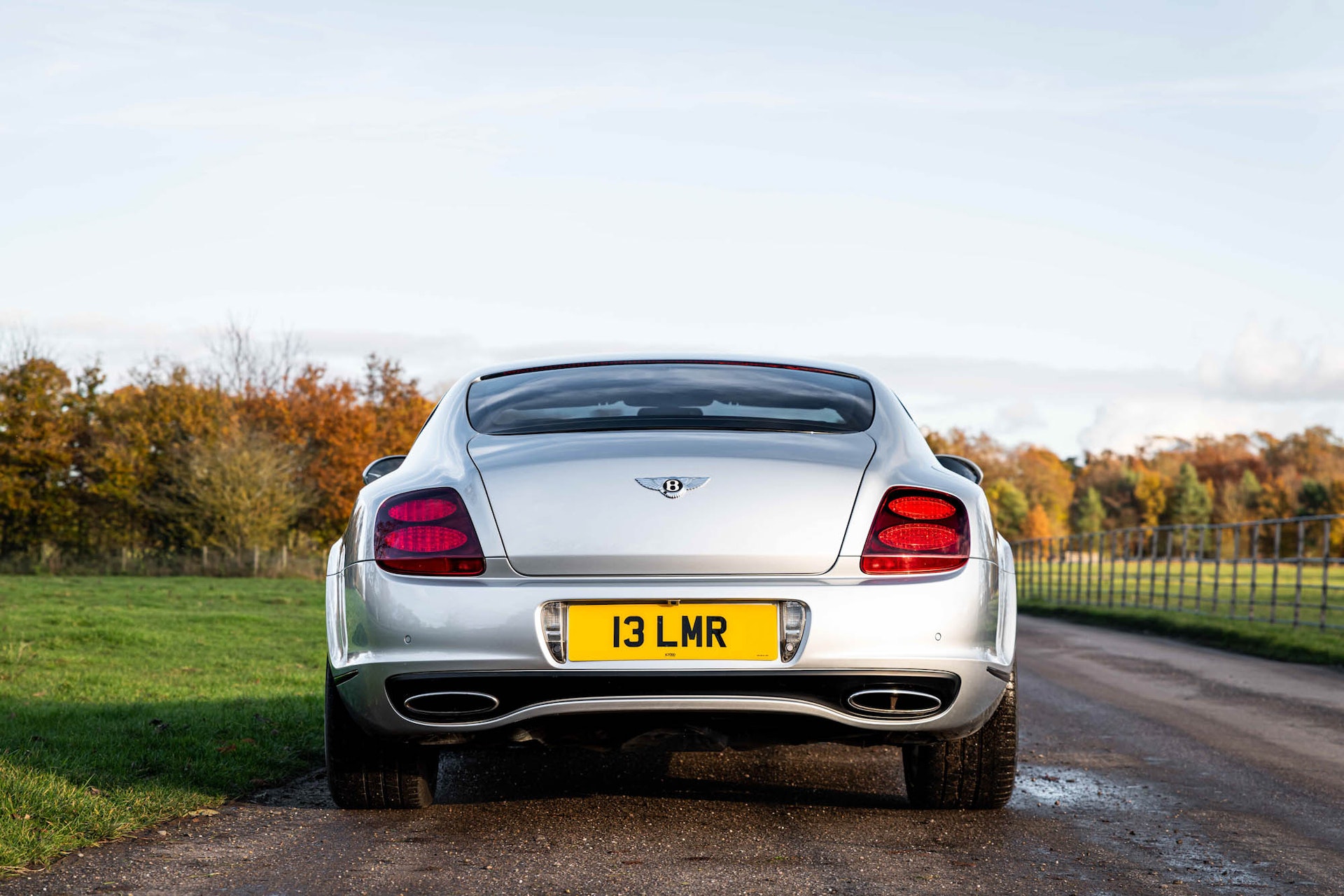 Its bodywork is in superb condition, and is finished in the handsome Moonbeam Silver hue. This car has been used and enjoyed on the road, so there are some stone chips on the front bumper, but no other blemishes have been spotted by the vendor. 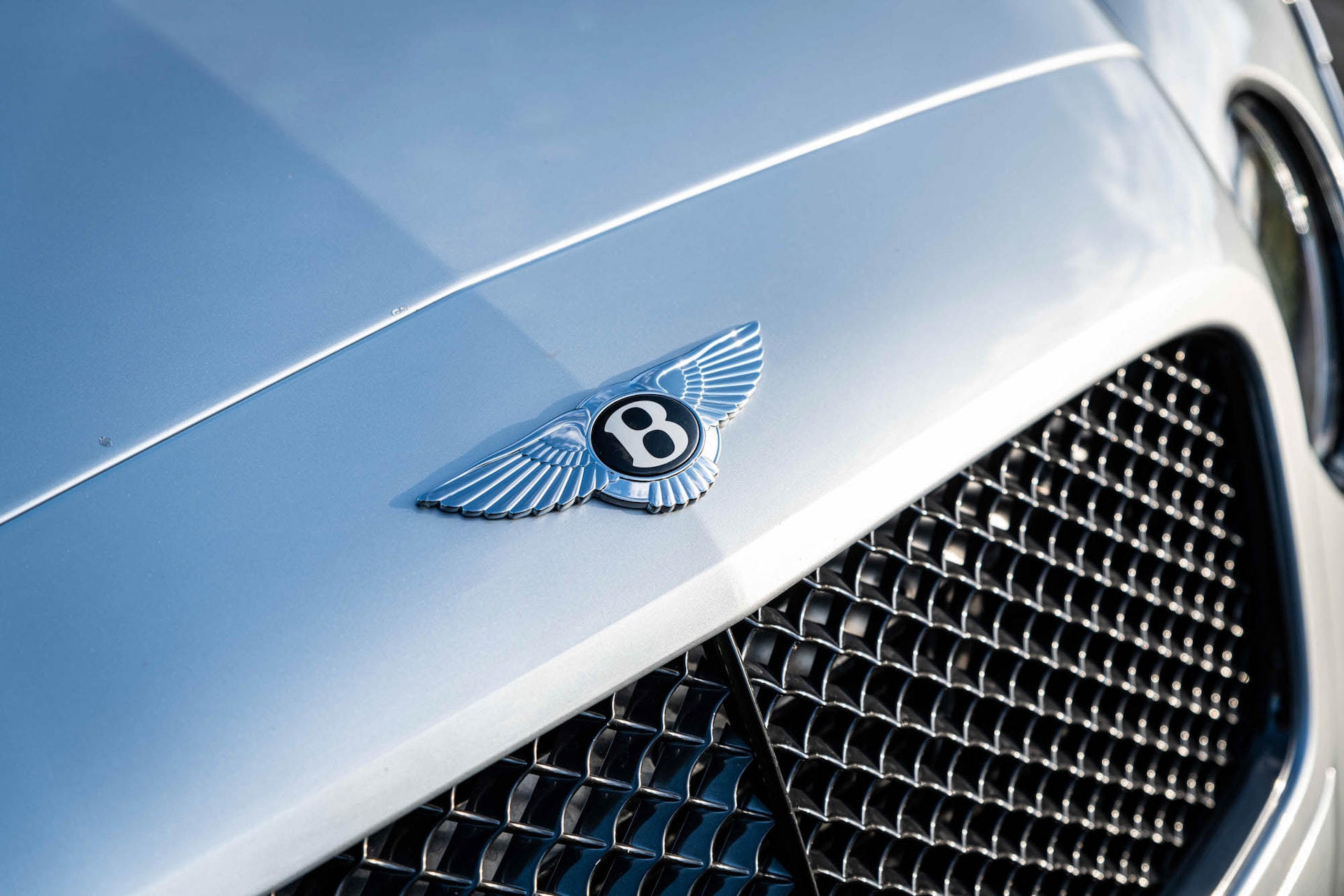 The air intakes and grilles have a gloss black finish, and the 10-spoke forged alloy wheels also contrast to the bright paintwork with a dark gloss appearance. All of the light lenses and body trims are in excellent order. The larger flattened-oval exhaust tailpipes are the finishing touches on a recently-fitted sports exhaust system. 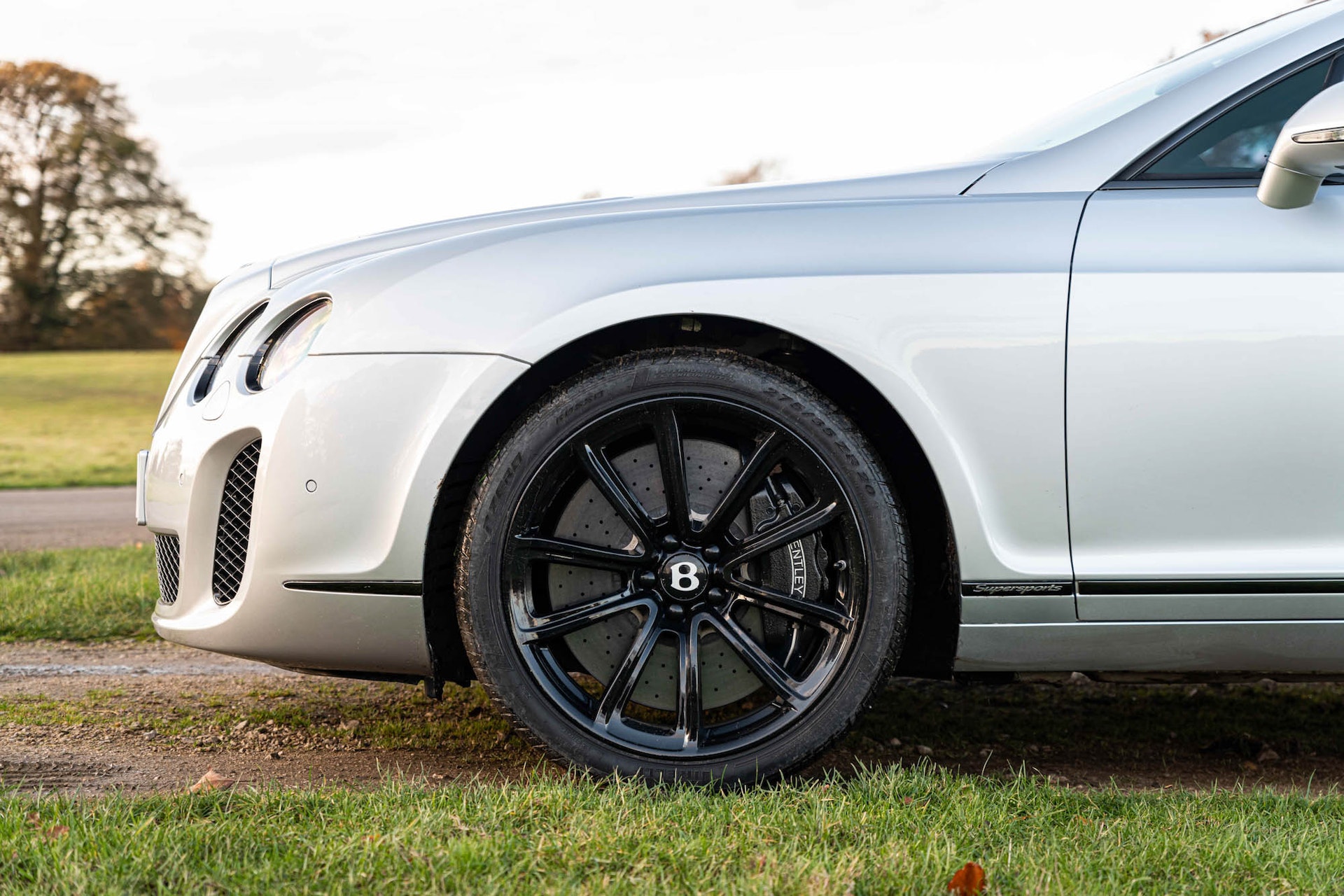 Inside, this Continental GT Supersports is trimmed in a handsome combination of Beluga Black leather with diamond-quilted Alcantara centre panels on the seats and door cards. Its cabin also features the optional Comfort Seat configuration, which reintroduces accommodation for passengers in the back, and means the front seats are fully trimmed in leather and Alcantara rather than carbon-fibre. All of the upholstery is in absolutely superb condition, with no damage whatsoever. 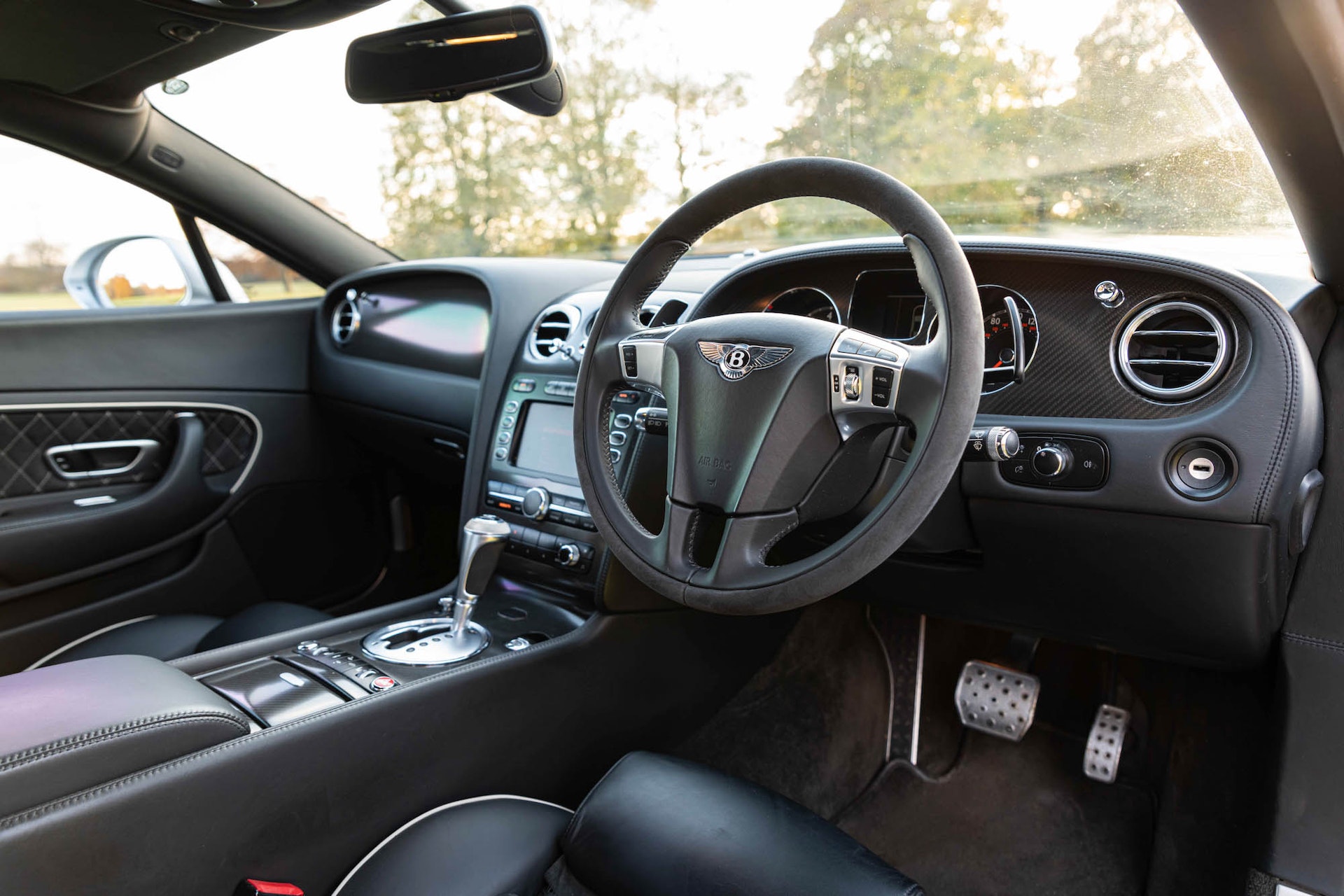 The leather is stitched and piped in white, and there are satin-finished carbon-fibre trim accents across the dashboard and centre console, as well as drilled alloy pedals. The gear shift lever features a knurled metal top trim and soft-grip leather, while the steering wheel was renewed at the request of the current owner when he bought the car. 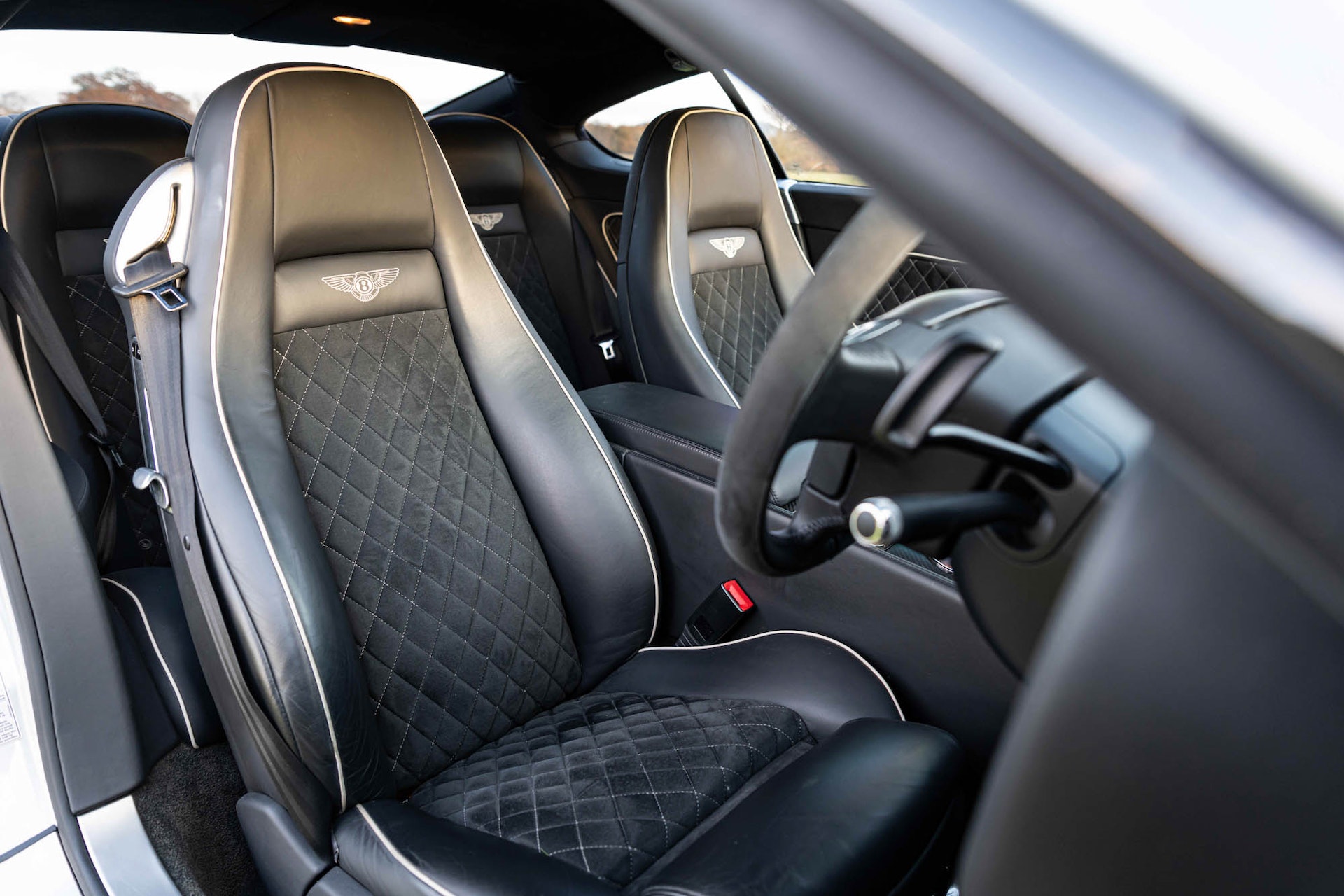 Opening the bonnet reveals an engine bay that is clean and tidy, with a smart crackle-black finish on the intake manifolds. The last scheduled maintenance was in September 2018 at Bentley Birmingham at 41,569 miles, which comprised a full service as well as warranty work to fix a fault with the reversing camera. 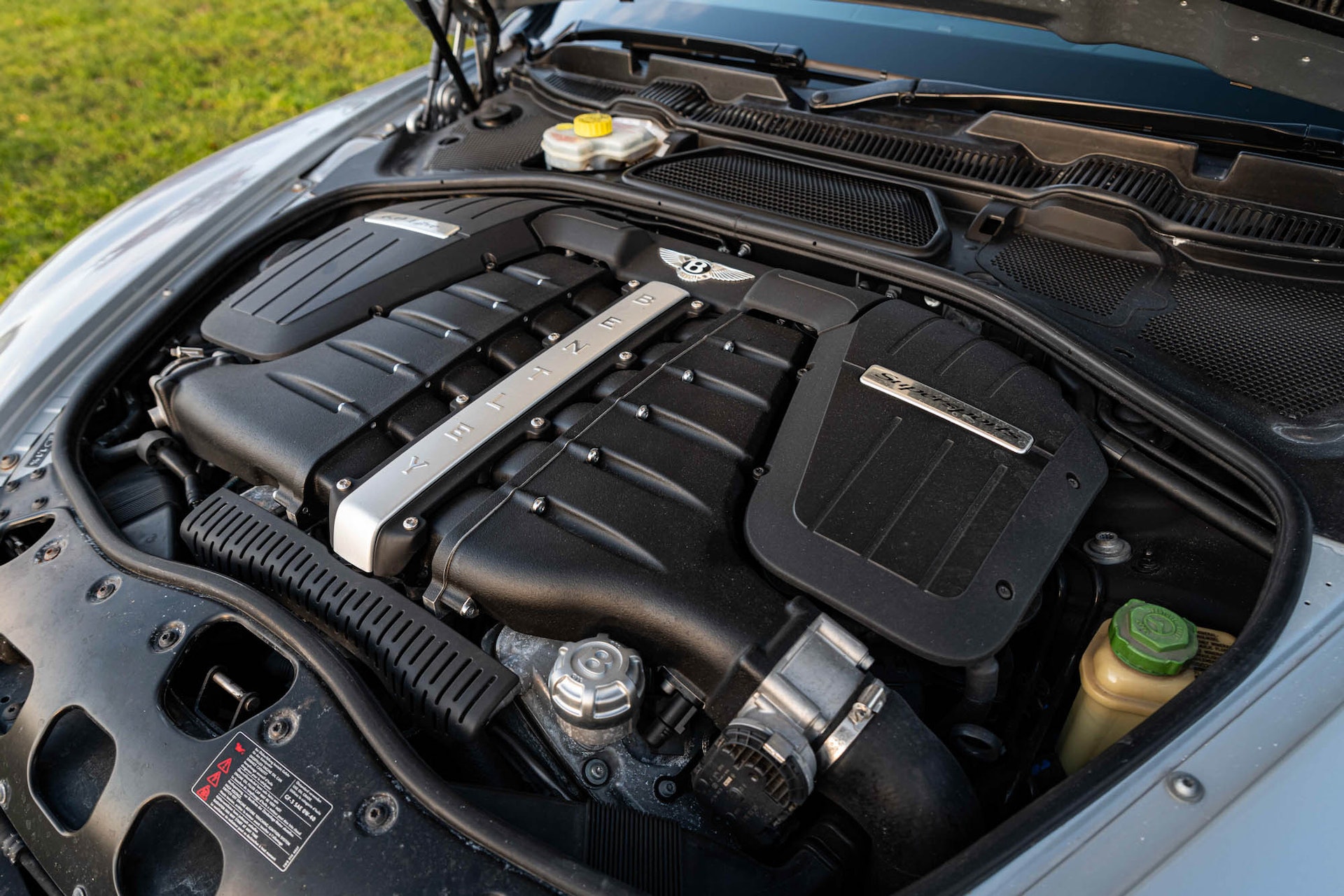 Prior to this it was serviced at Bentley Leeds in June 2016 at 38,170 miles and in June 2015 at 34,517 miles. During the vendor’s ownership, warranty work has also been carried out on the suspension and the brake calipers, all of which has been done at Bentley main dealers. 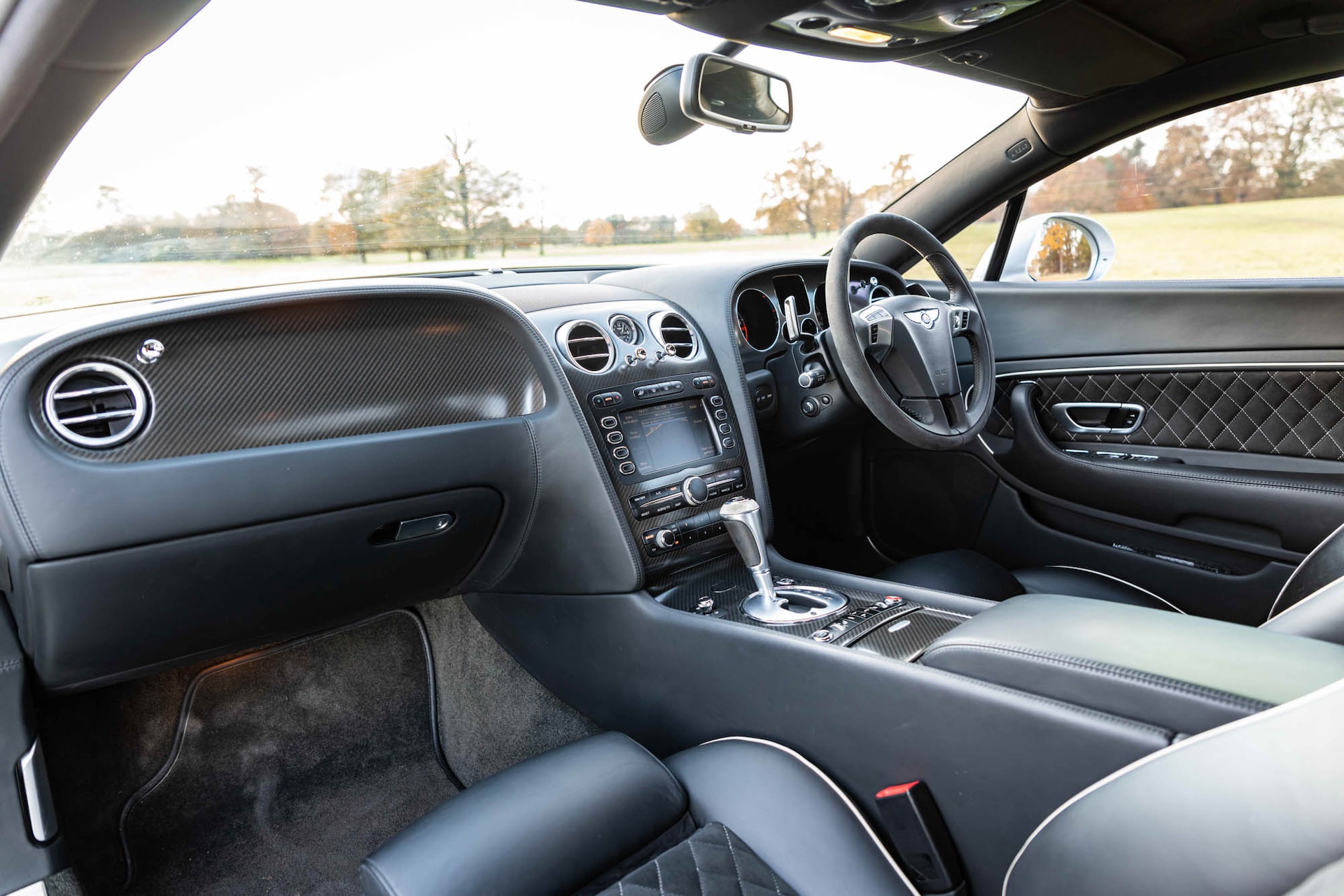 Its most recent MOT test was on 13 June 2019 at 41,703 miles, which resulted in a clean pass with no advisories. The alloy wheels are shod in Pirelli P Zero tyres, in size 275/35 ZR20 front and rear, which are in sound condition with a good level of tread remaining. 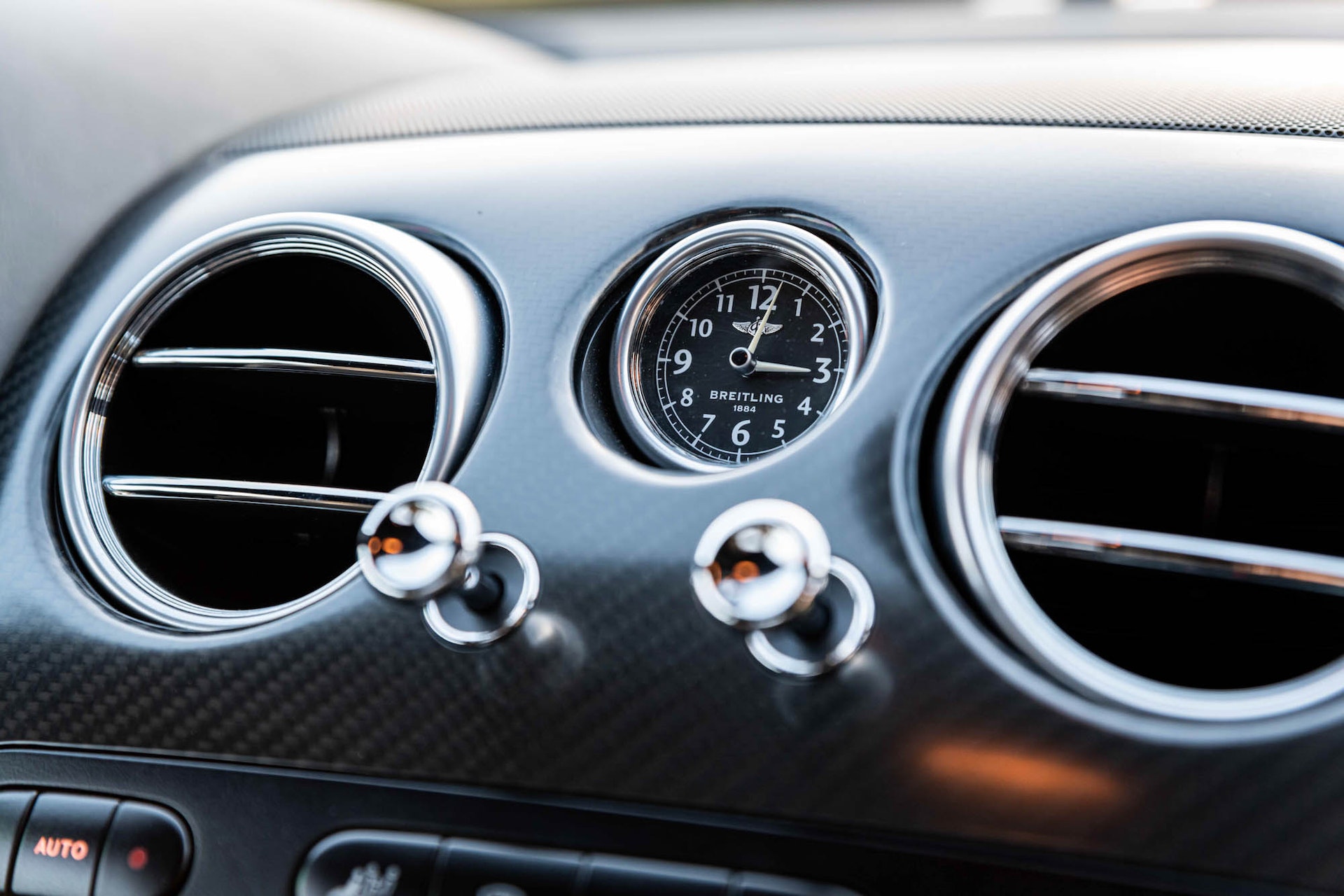 The car is accompanied by the complete original book pouch, including the owner’s manual as well as the stamped maintenance record. There are also numerous invoices, which cover all of the work done during the vendor’s ownership. 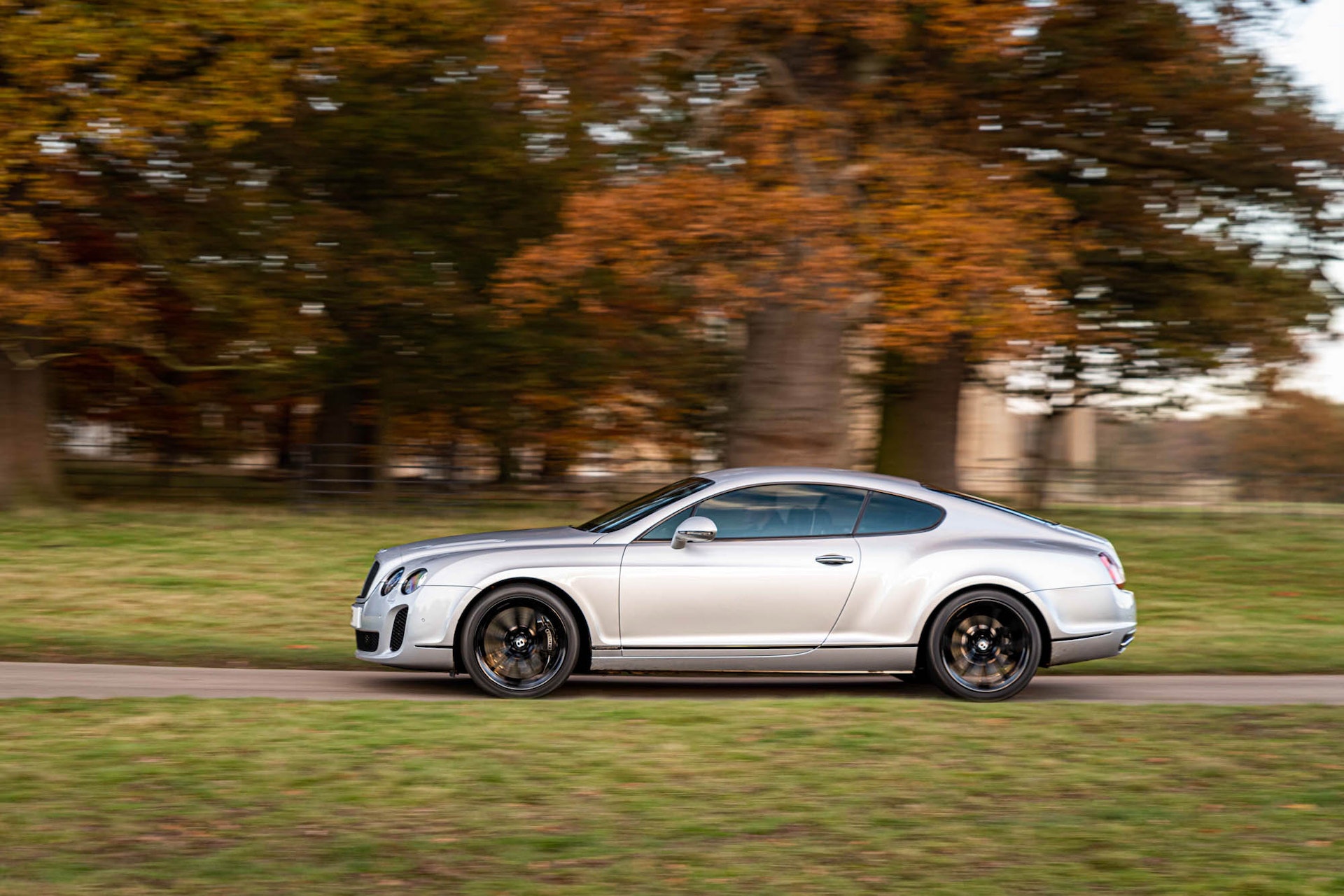 This Bentley Continental GT Supersports is a luxury grand tourer with outright performance that will bother most supercars. It is something of a rarity in the GT class by offering genuinely blistering pace without losing any of the elegance and comfort that define it as a bona fide Bentley. Beautiful to look at and rewarding to drive, it will undoubtedly delight and surprise its next owner in equal measure.