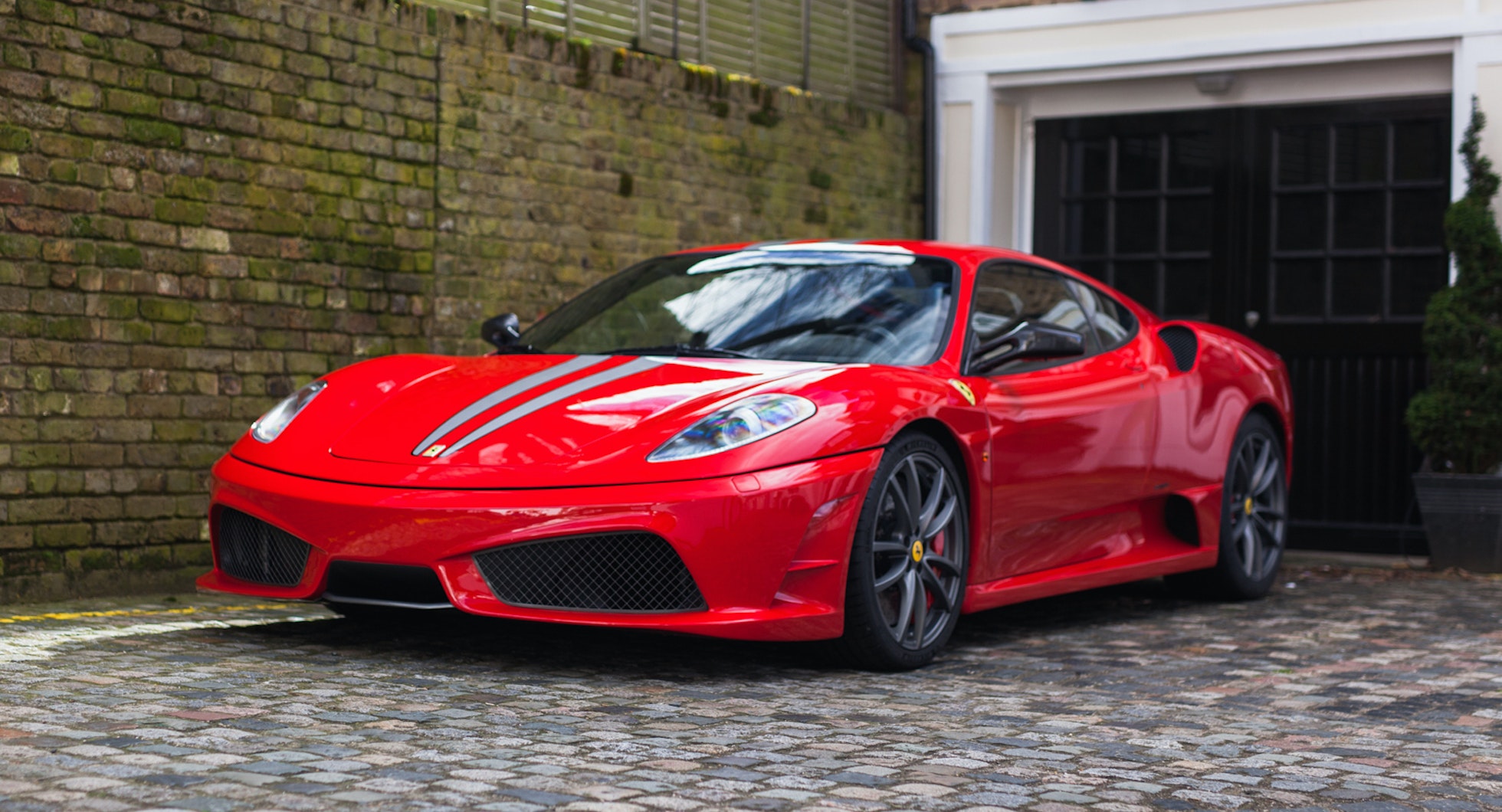 This Ferrari 430 Scuderia is a thrilling road car, presented in superb condition, and with just two owners from new. It is powered by the 4.3-litre flat-plane crank V8 engine, producing 503bhp, and driven through the rear wheels via the six-speed ‘F1-SuperFast 2’ automated manual with paddle shift. The odometer shows just 40,192 km (24,974 miles) from new. 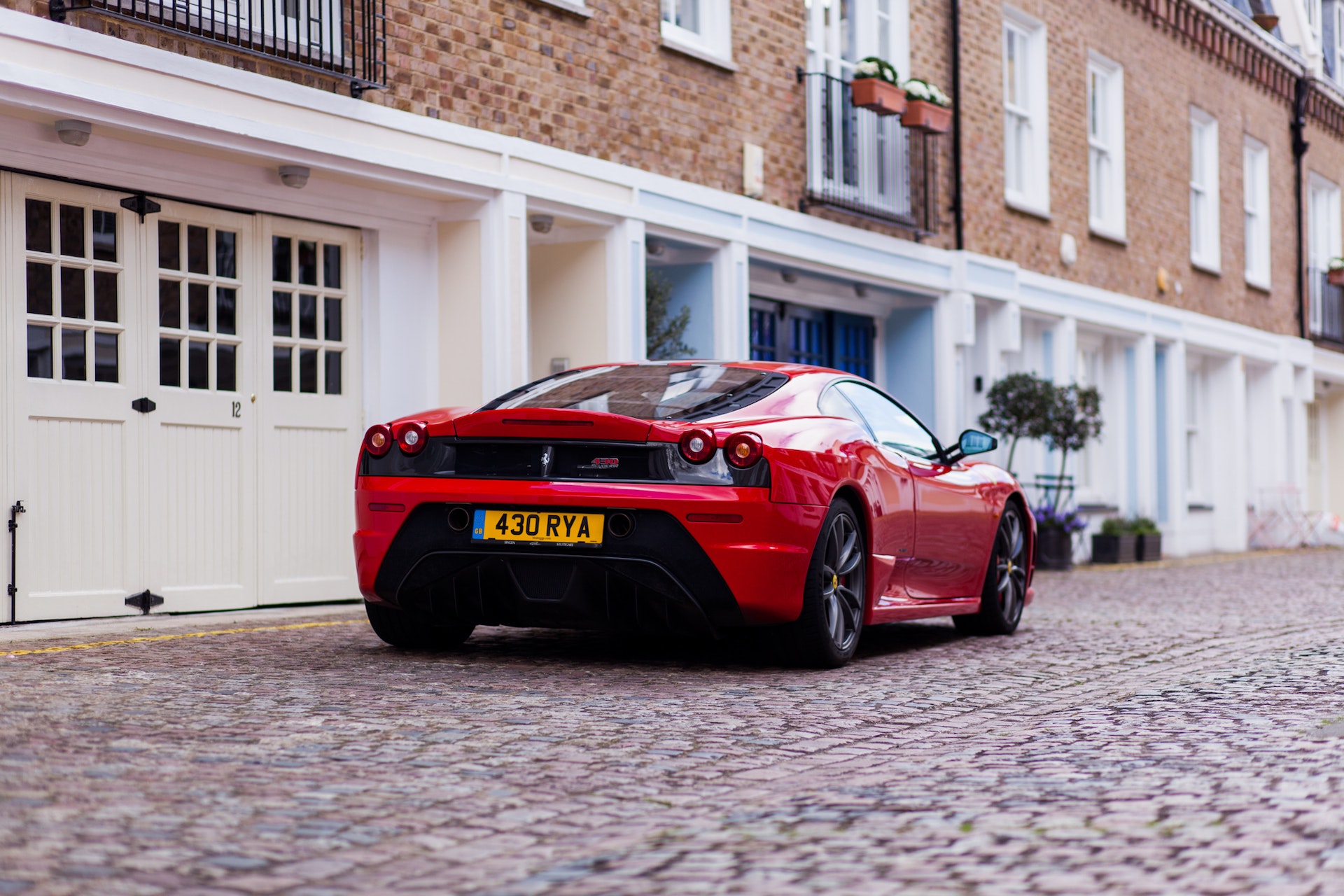 An original left-hand drive example, this Scuderia was supplied new via G Cavallari Monaco Motors on 30 July 2009, to an owner who had properties in both the south of France as well as Germany. It was in the latter that the current owner acquired the car in August 2014. The seller splits his time between the UK and Germany, which is why left-hand drive suited him perfectly. He has enjoyed around 26,000 km behind the wheel of this remarkable supercar. 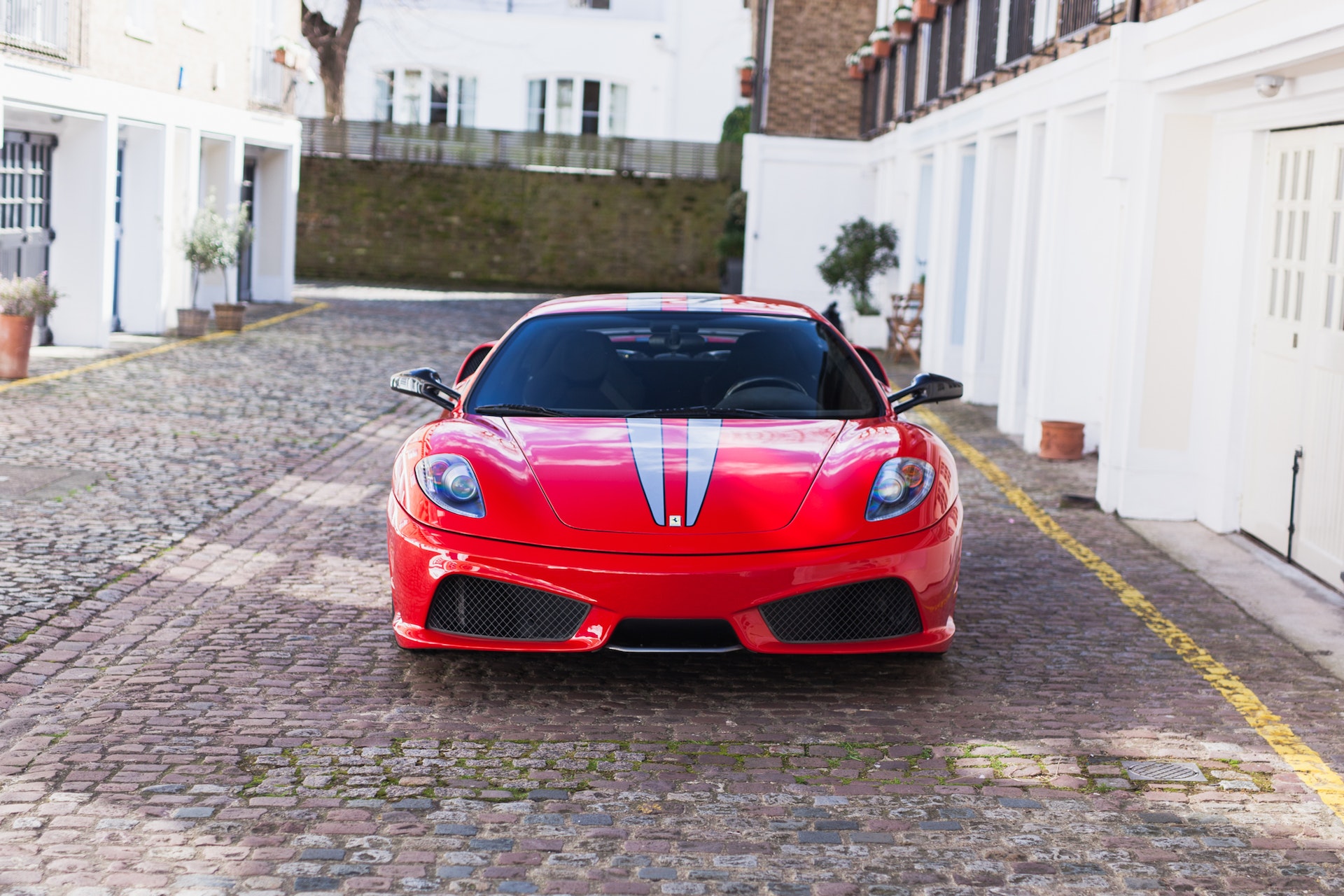 The body panels of this Scuderia are in excellent condition, and the paintwork has a smooth and glossy finish all around the car. The seller notes only a small soft dent on the offside door, caused by someone pressing the wing mirror onto the bodywork, and a single paint bubble on the nearside rear wheel arch. The rear bumper was slightly damaged and repaired after a low-speed reversing incident, and the front end has previously been repainted to eliminate stone chips, followed by the application of paint protection film. This cosmetic work was undertaken by Stratstone Manchester, and the file contains photo documentation and associated invoices. 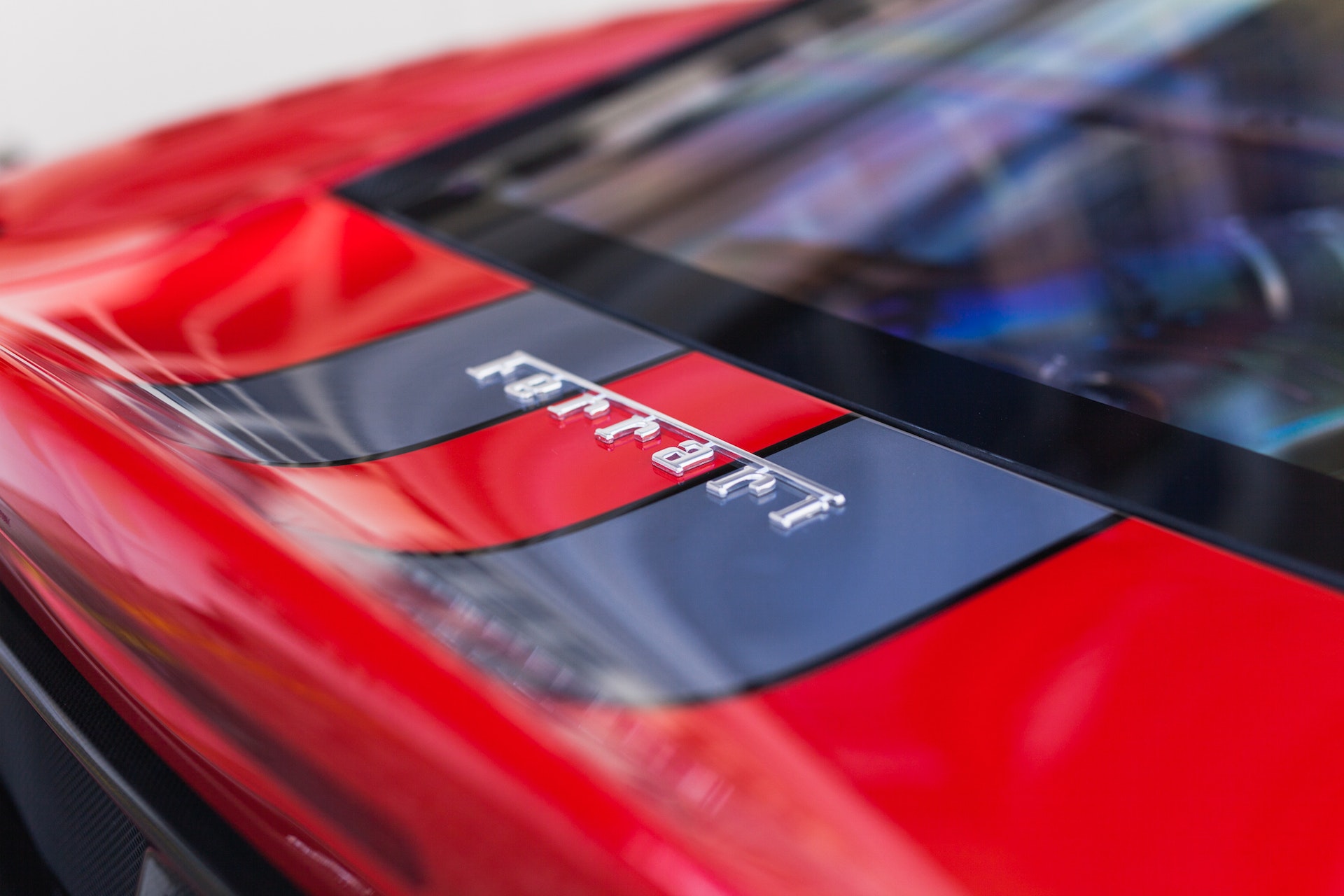 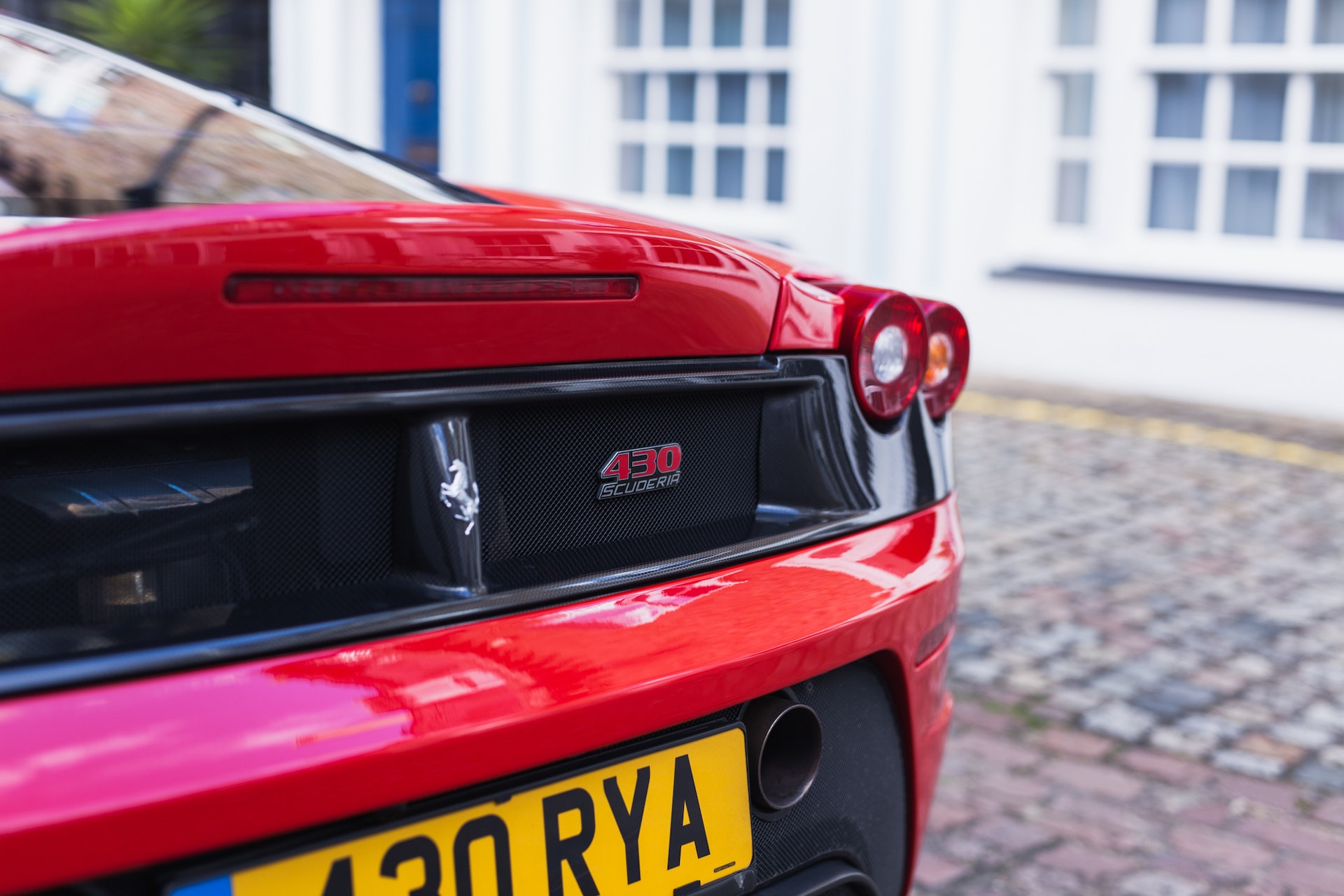 The cabin is equipped with Ferrari’s ‘Super Racing’ carbon-fibre bucket seats with four-point harnesses, trimmed in a combination of Alcantara with ‘3D’ technical cloth centre panels. The upholstery is in superb condition, and the Alcantara trim is also applied to the dashboard, roof pillars and headlining. 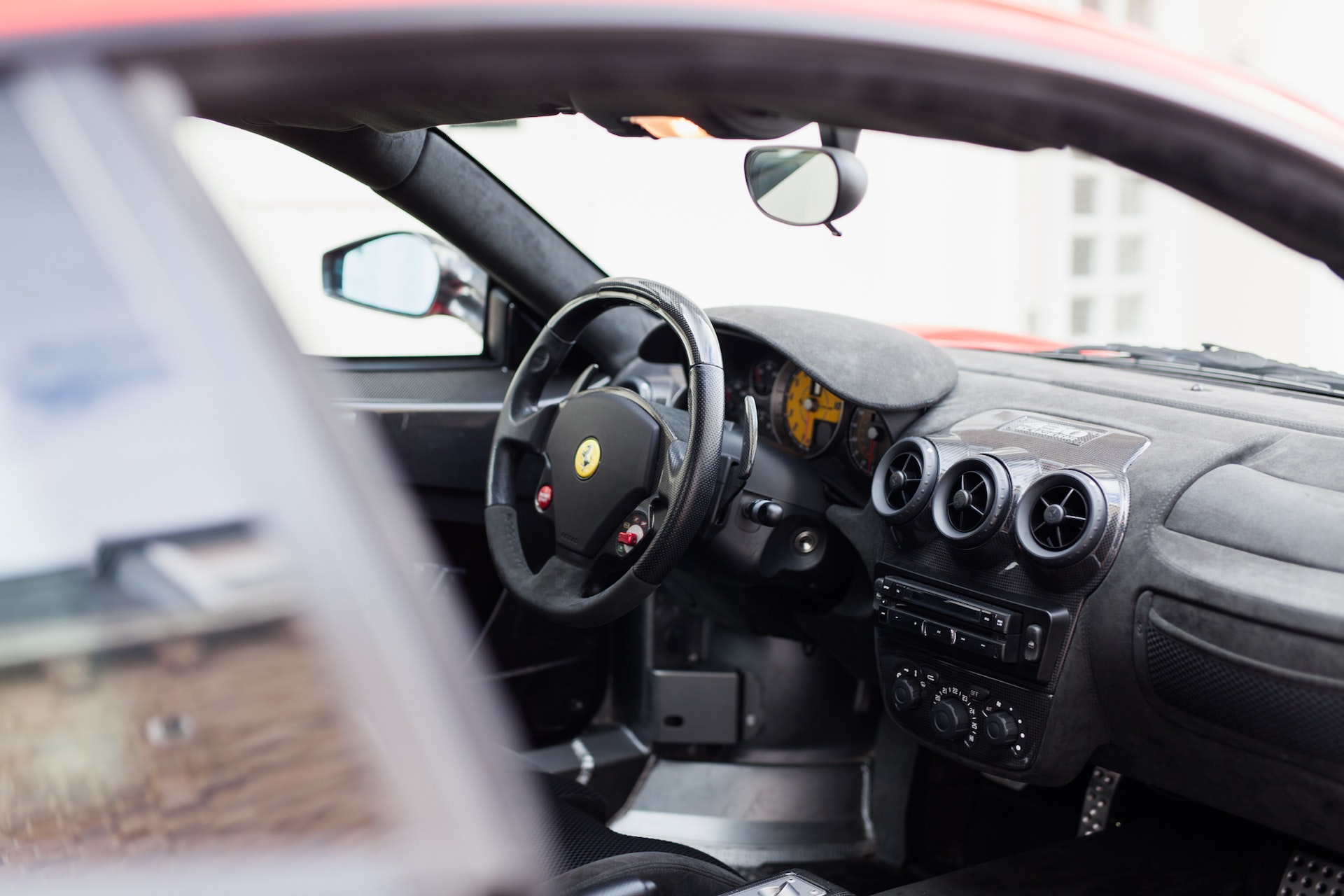 Its steering wheel has been upgraded to the OEM item featuring LED shift lights and carbon-fibre surround, but the original Alcantara-trimmed wheel is included in the sale. When the seller purchased the car in 2014, the original Becker radio unit was replaced with the official Ferrari retrofit upgrade by Clarion, which comprises a flip-out touch-screen, with Bluetooth connectivity, satellite navigation, and a reversing camera. 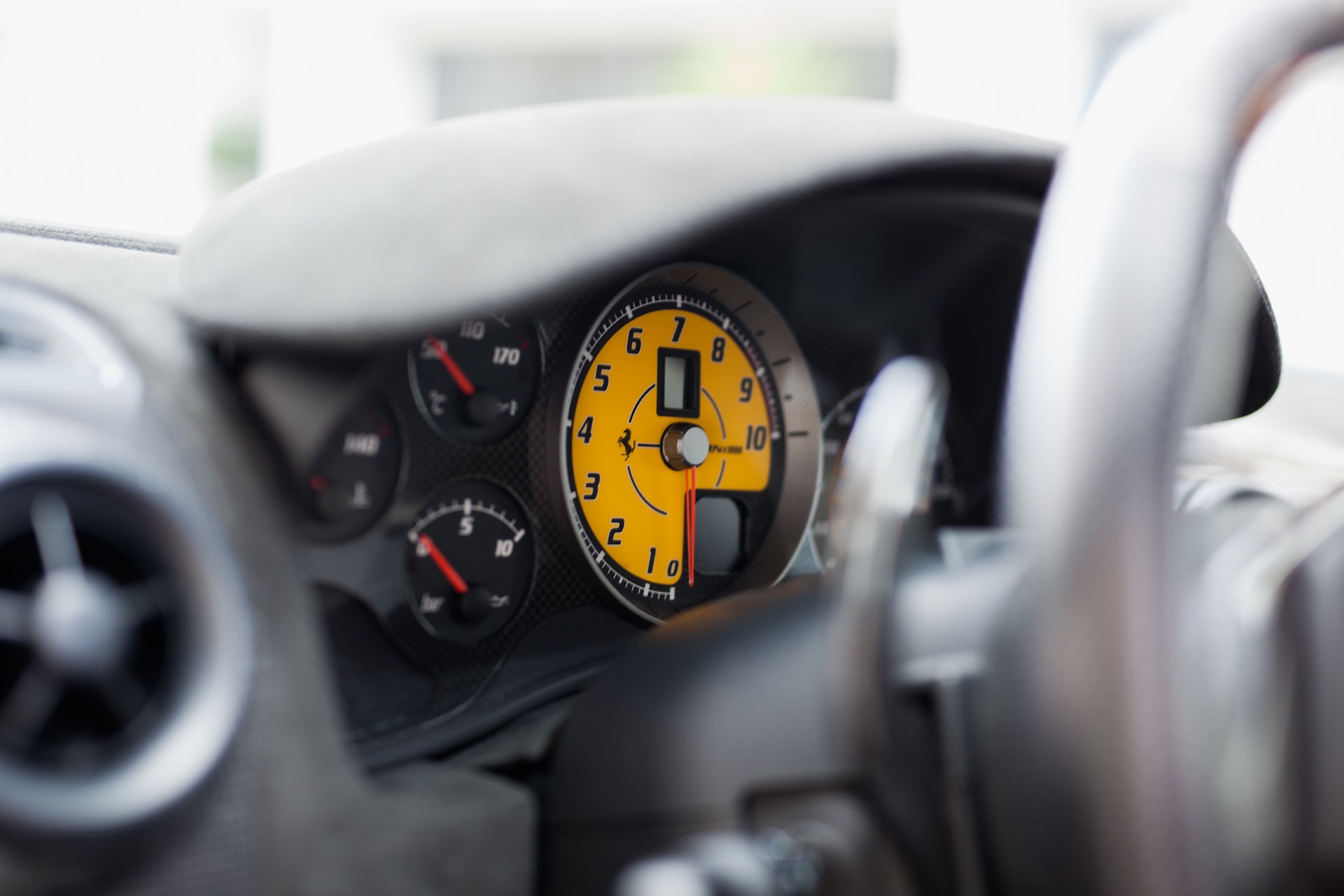 The speedometer fascia was swapped to a miles-per-hour readout when the car was officially registered in the UK in 2016, but the digital odometer still records the mileage in kilometres. The carbon-fibre transmission tunnel and carbon-fibre dashboard console are in superb condition, and the only note from the seller is some slight scuffing to the rubber seal around the nearside door. 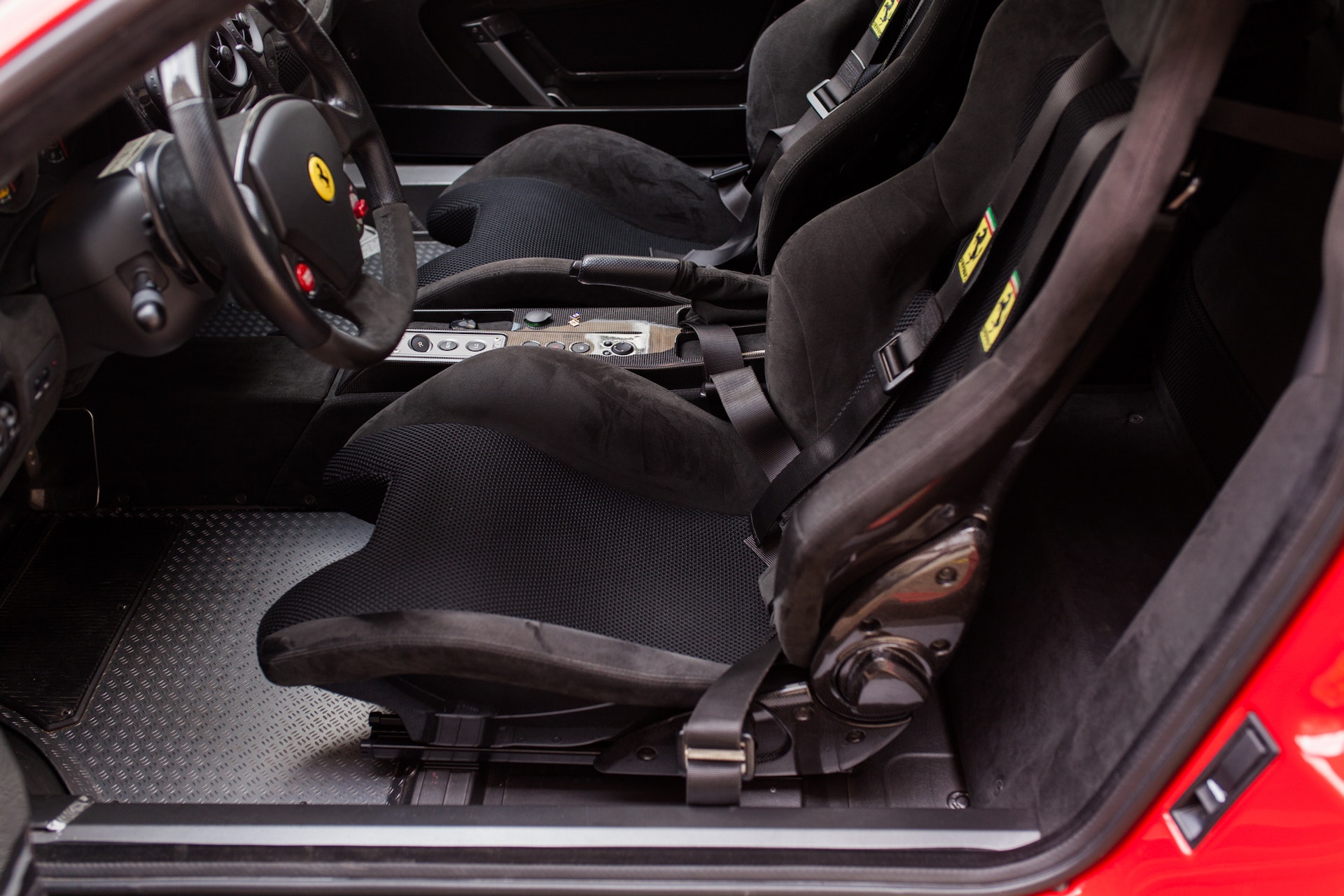 Its last scheduled maintenance was carried out on 10 March 2020 at 40,171 km, at main dealer HR Owen in Kensington. This comprised a full annual service with replacement of the engine oil and oil filter renewal, new brake fluid, and a new air filter. 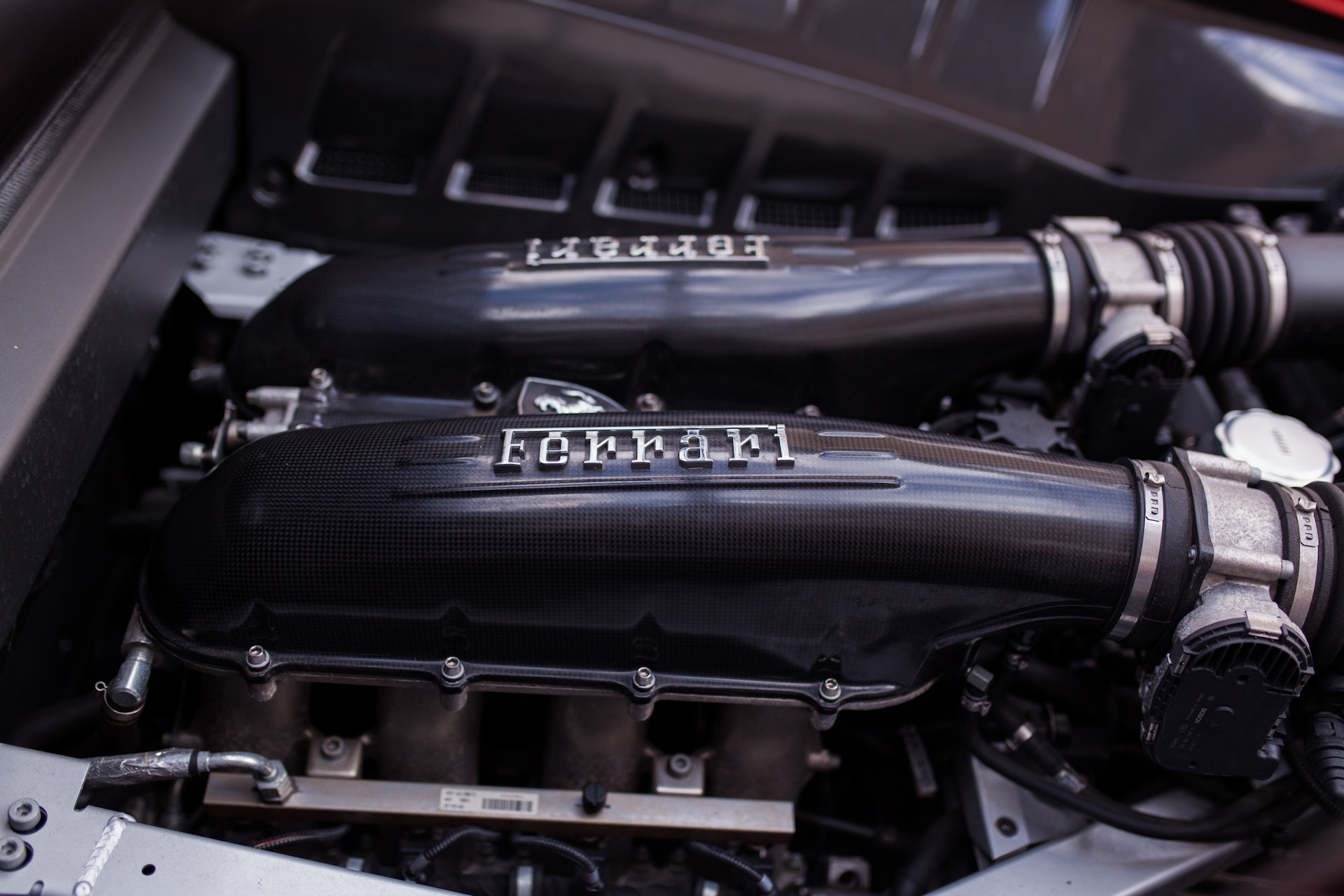 The two previous services were in January 2019 at 37,716 km, and in February 2018 at 36,224 km, both carried out at Stratstone Manchester. The power steering fluid and gearbox oil were renewed during the latter. During the seller’s ownership, the suspension ball joints have also been replaced. Its offside front brake disc has had a rough appearance since he acquired the car in 2014, but it has remained in perfect working condition. The latest report shows more than 50% life still left in all of the carbon-ceramic discs. 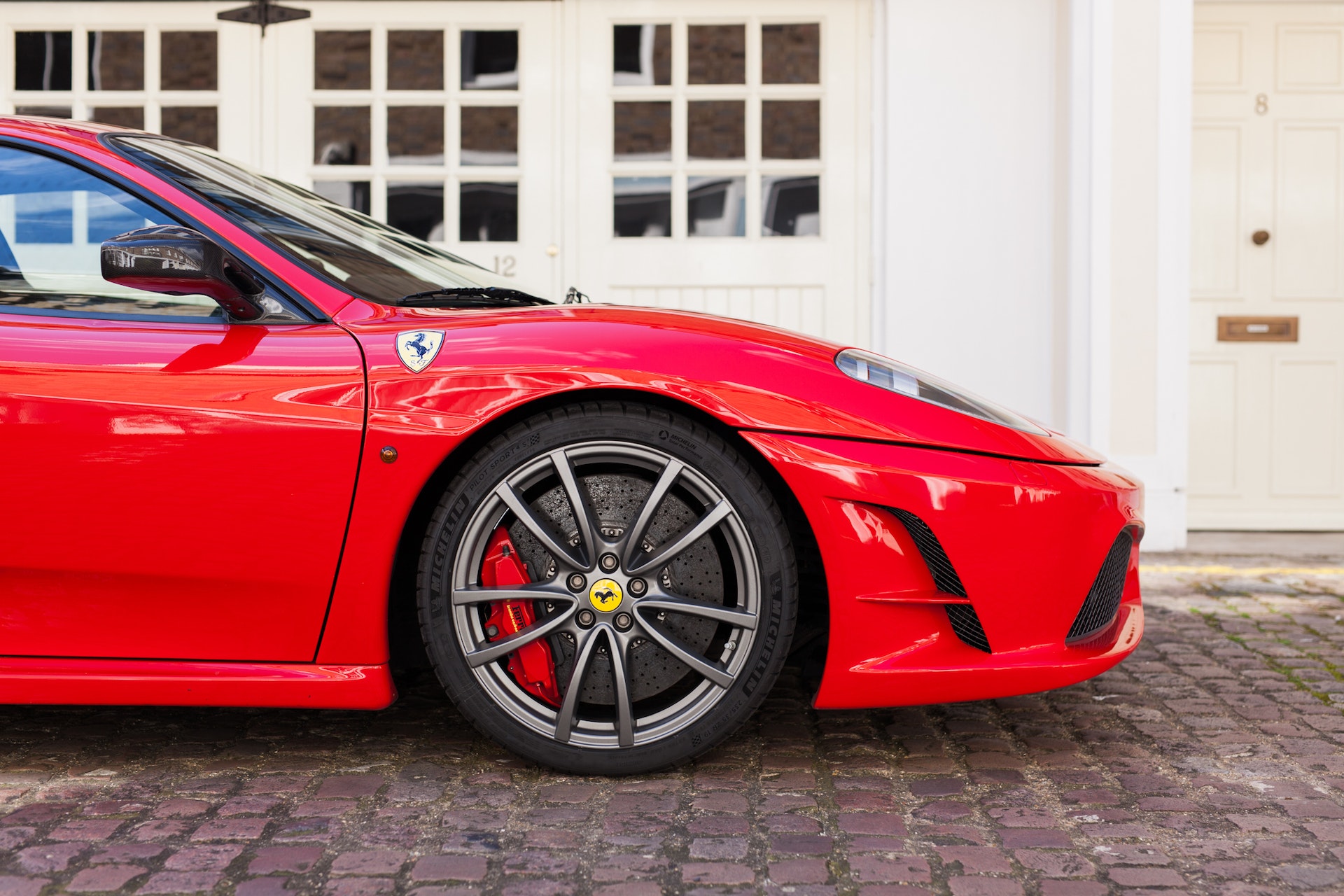 The most recent MOT test was on 15 July 2019 at 39,059 km (24,270 miles), which resulted in a first-time pass with only one advisory regarding worn rear tyres. However, four new tyres have since been fitted. The car has had four annual MOT tests since arriving in the UK, and there have never been any other advisories or alerts about faults or wear. Its alloy wheels are now shod in a fresh set of Michelin Pilot Sport 4 S tyres in size 235/35 ZR19 at the front and 285/35 ZR19 at the rear. 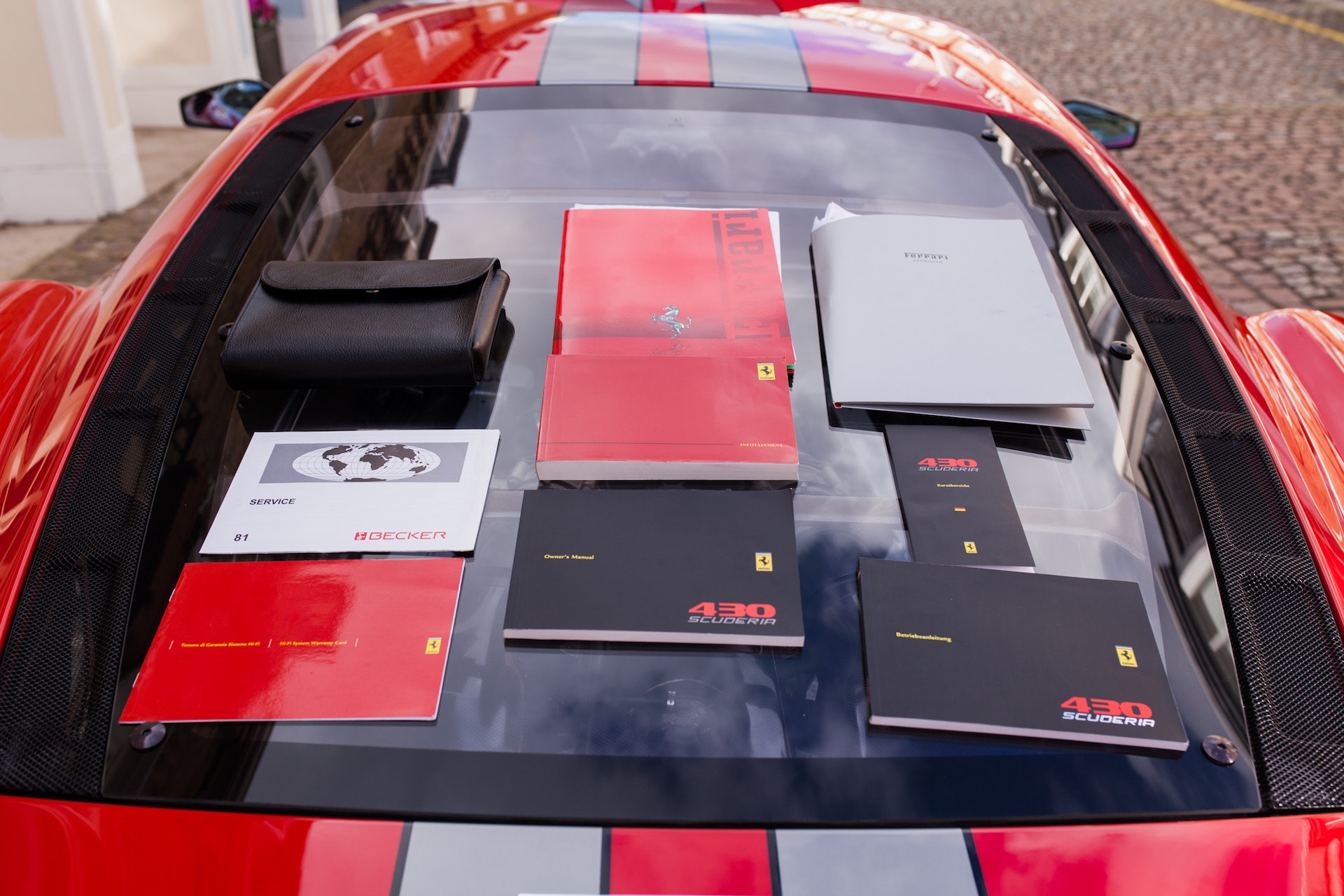 Accompanying the car is the complete book pack, including the owner’s handbook, warranty and service records. The Ferrari dust cover is also present, along with the original tool kit and air compressor. 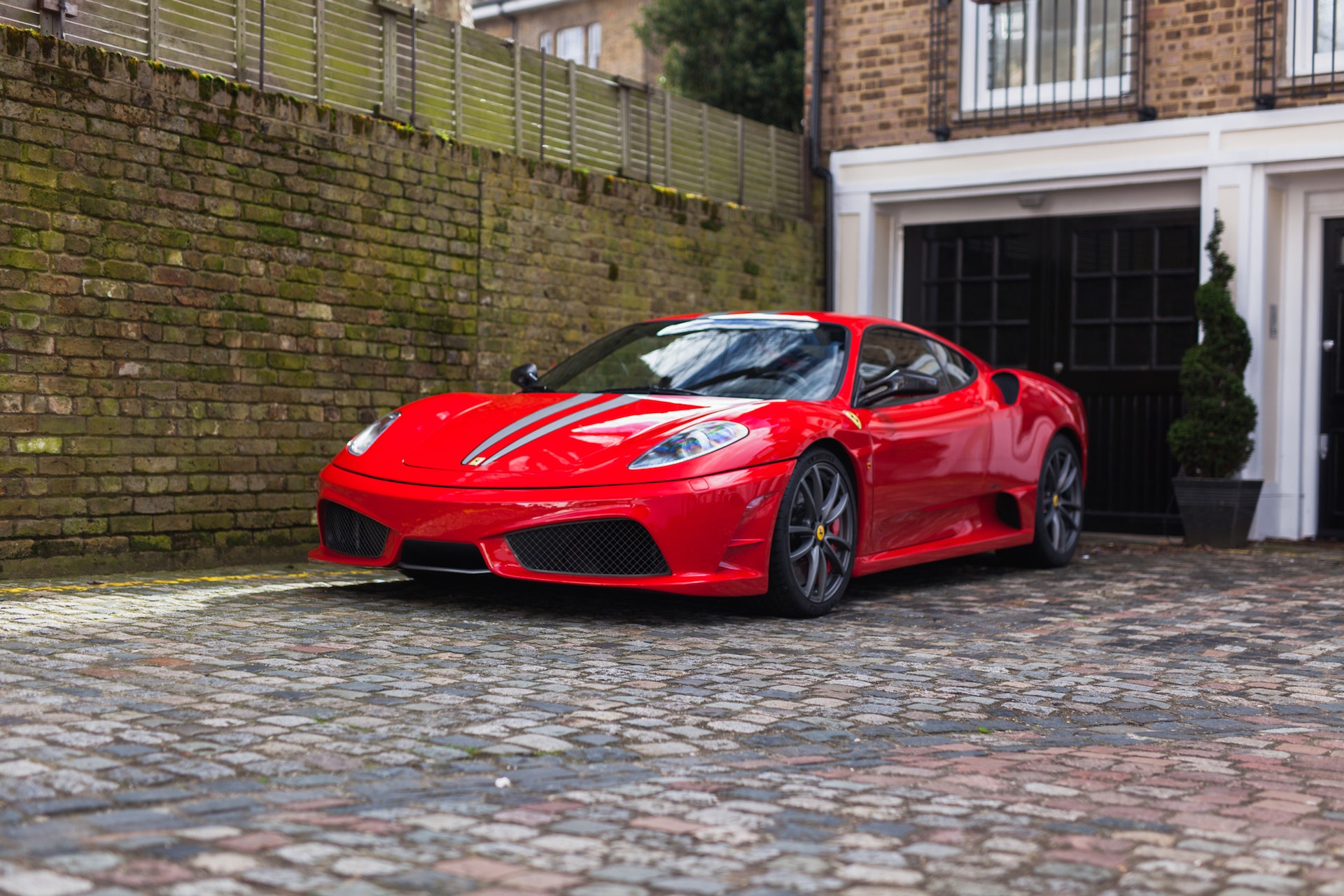 This Ferrari 430 Scuderia is a superb example of a limited-run and highly focused road car, which boasts a wonderfully analogue driving experience compared to many of the latest supercars. It has been meticulously maintained by its current owner, who has had it serviced every year while in his care. As such, it presents in excellent mechanical condition today, and is ready for the next owner to experience its exhilarating performance straight away.