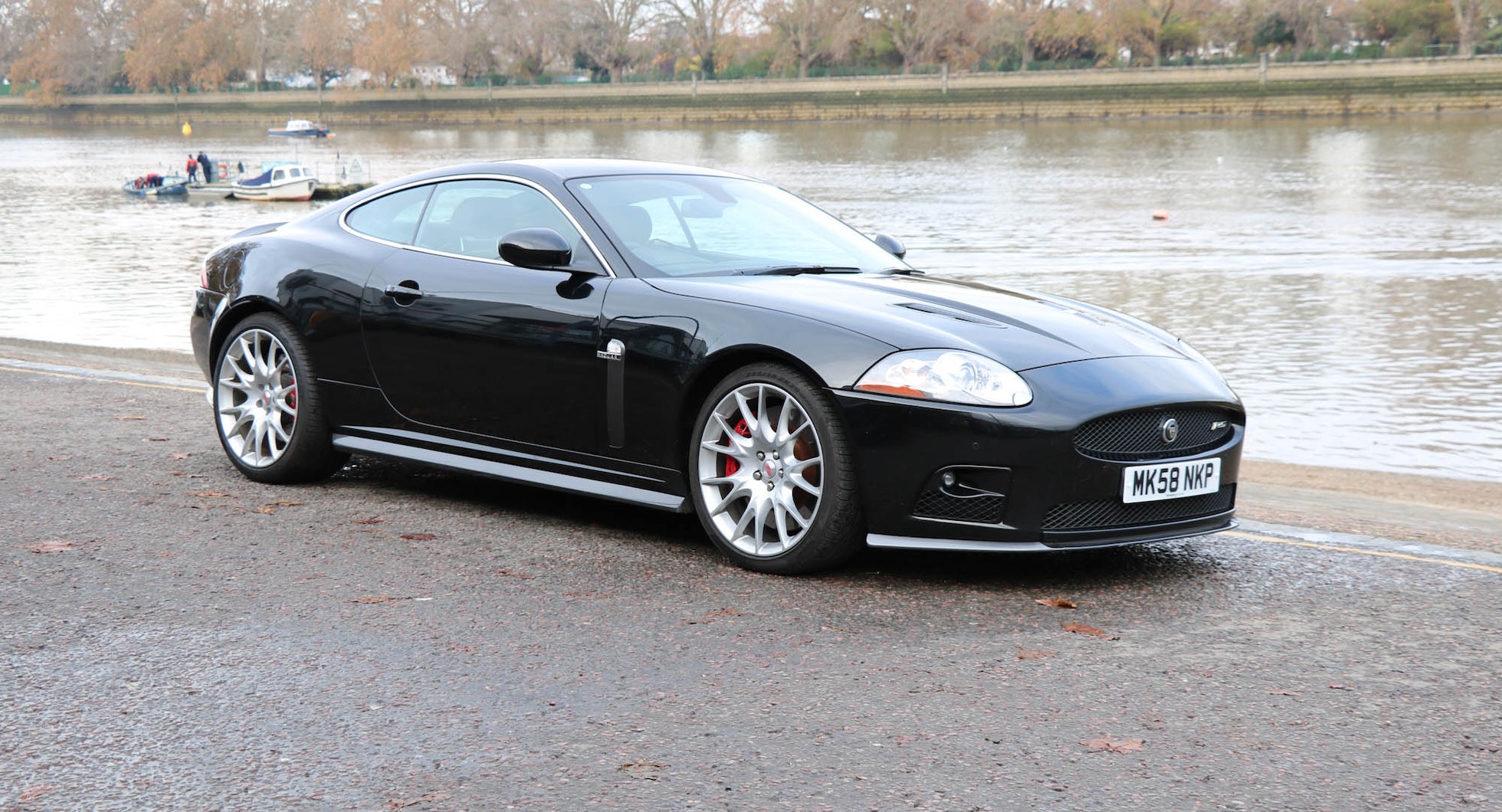 This 2008 Jaguar XKR-S is an exceptionally rare performance car presented in superb condition, and is a genuinely collectable modern classic. It is powered by the 420bhp 4.2-litre AJ34S supercharged V8 engine, driven through the rear wheels via a six-speed ZF automatic transmission with paddle-shift gear selectors. The odometer indicates 65,963 miles from new, which is fully supported by the service history. 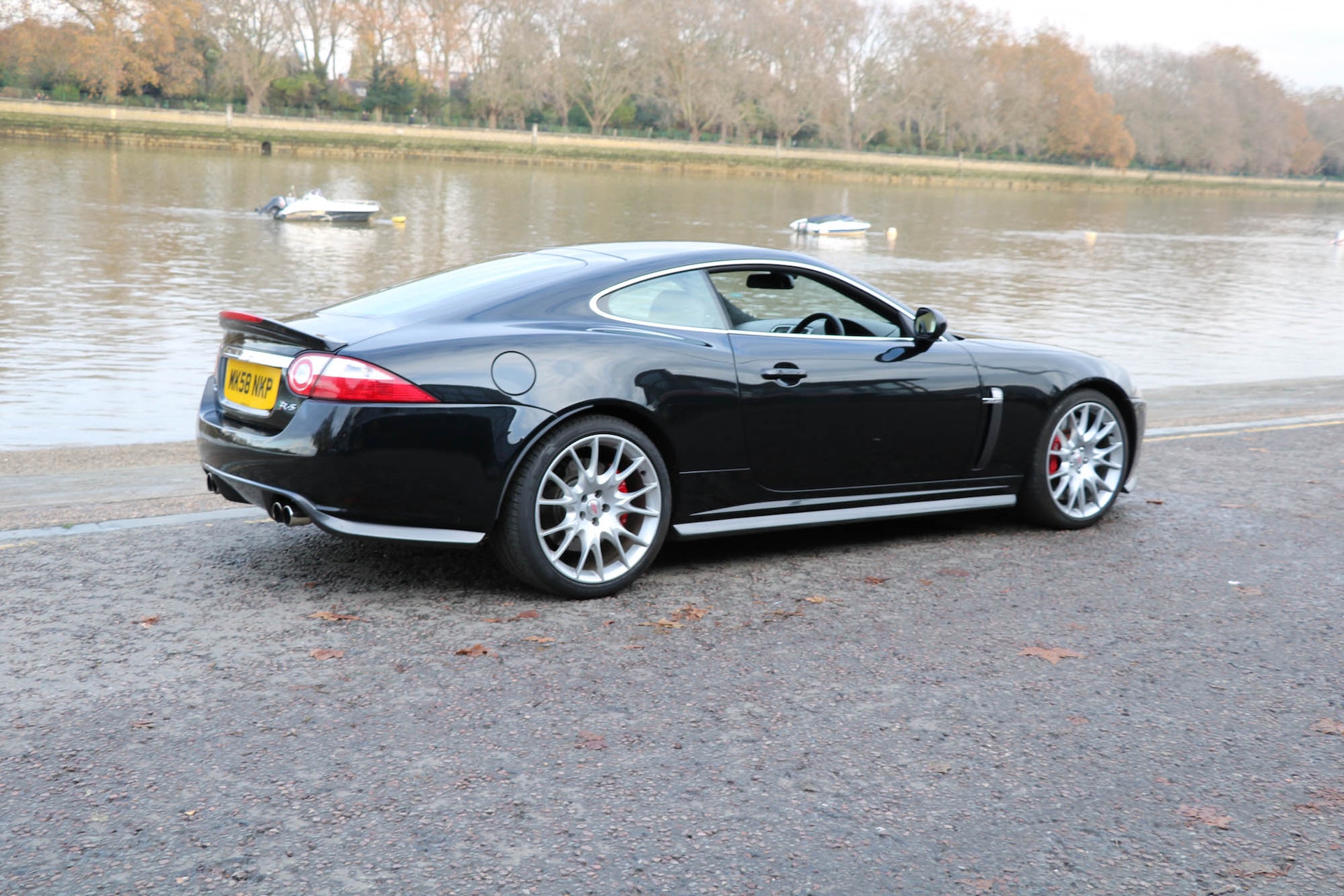 Revealed at the 2008 Geneva Motor Show, the XKR-S was - with the exception of the XJ220 - Jaguar’s fastest-ever production car, and was limited to just 200 examples. Just 50 of these are understood to have been built in right-hand drive. The main focus of the upgrade was chassis tuning, which incorporated firmer springs, dampers and anti-roll bars, and a ride height set 10mm lower. The steering was also 10% quicker, and the brakes uprated to race-derived six-pot Alcon brake calipers at the front and four-pot items at the rear. 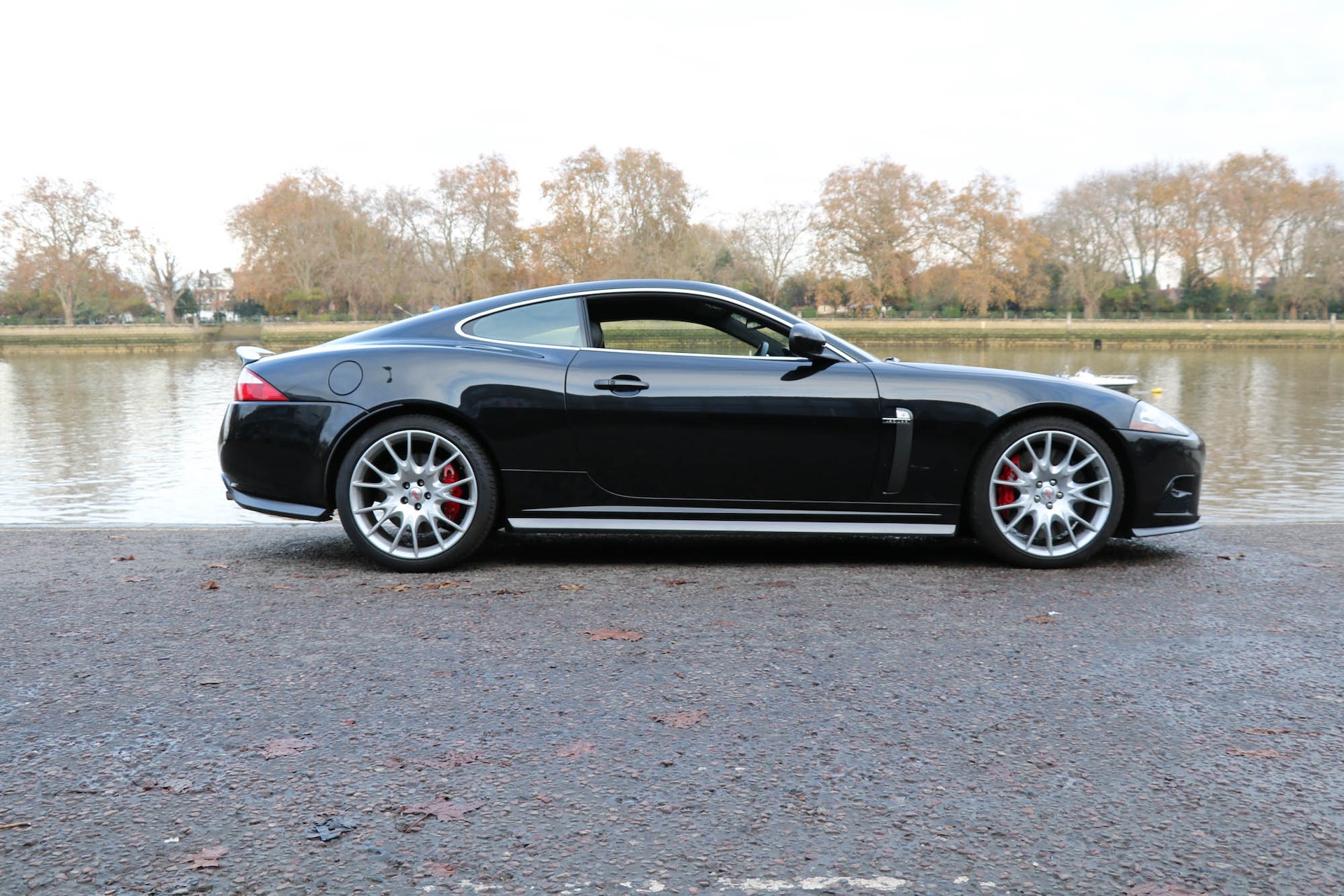 Its styling was enhanced by the addition of a tasteful body kit, which comprised a front splitter, side skirts, rear diffuser and a ‘ducktail’ boot lid spoiler. There were also newly designed forged alloy wheels. Far from being just cosmetic, the aerodynamic appendage improved stability above 150mph, as the electronic limiter was removed on the XKR-S to unlock a top speed of 174mph. 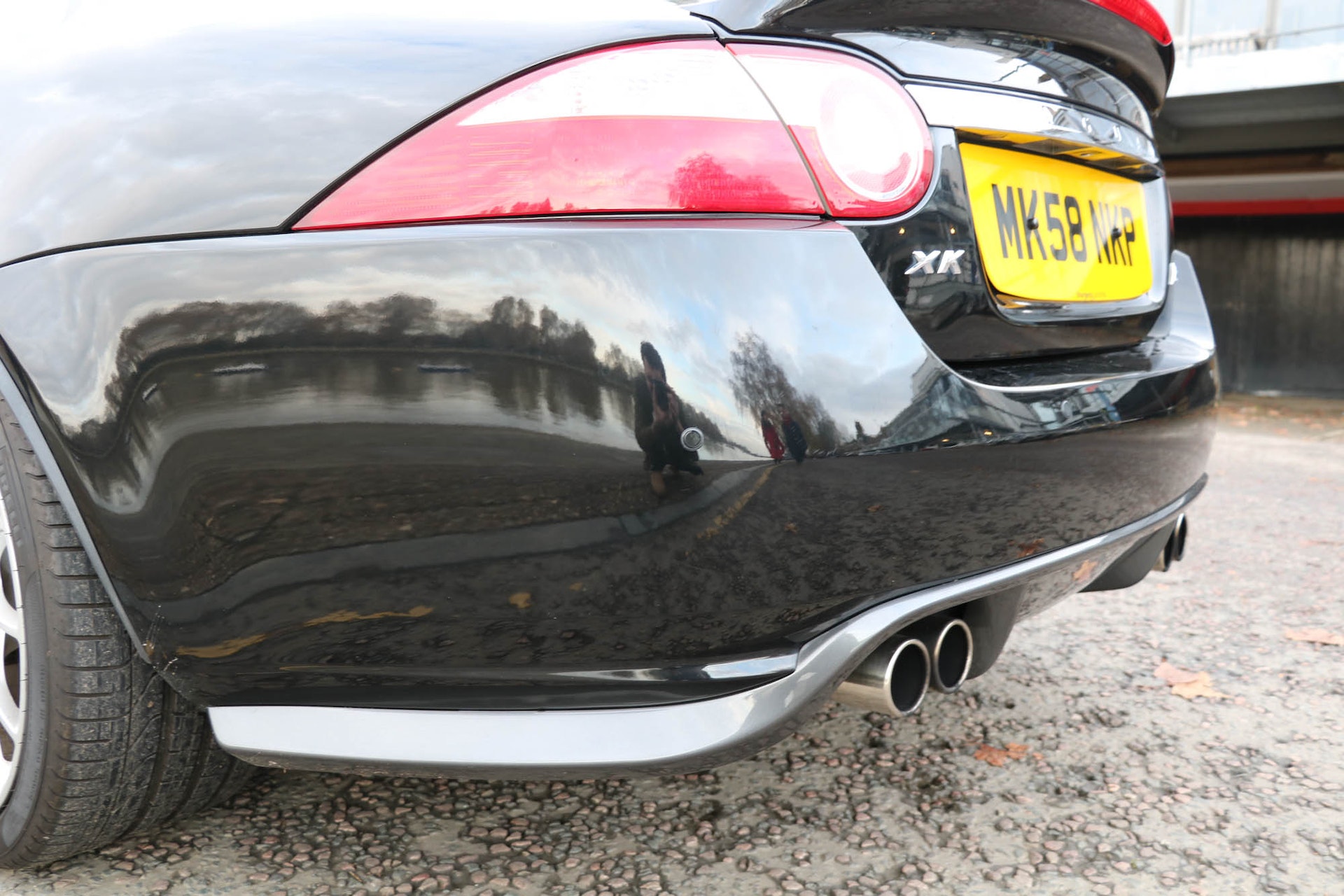 An original right-hand drive UK example, this car was first registered on 1 September 2008. The first owner used the car sparingly, and it was sold via private treaty in June 2012 with just 7,795 miles on the odometer. There are just two former keepers registered prior to the vendor’s ownership, and he is only selling the car as he does not have the time to enjoy it as intended. 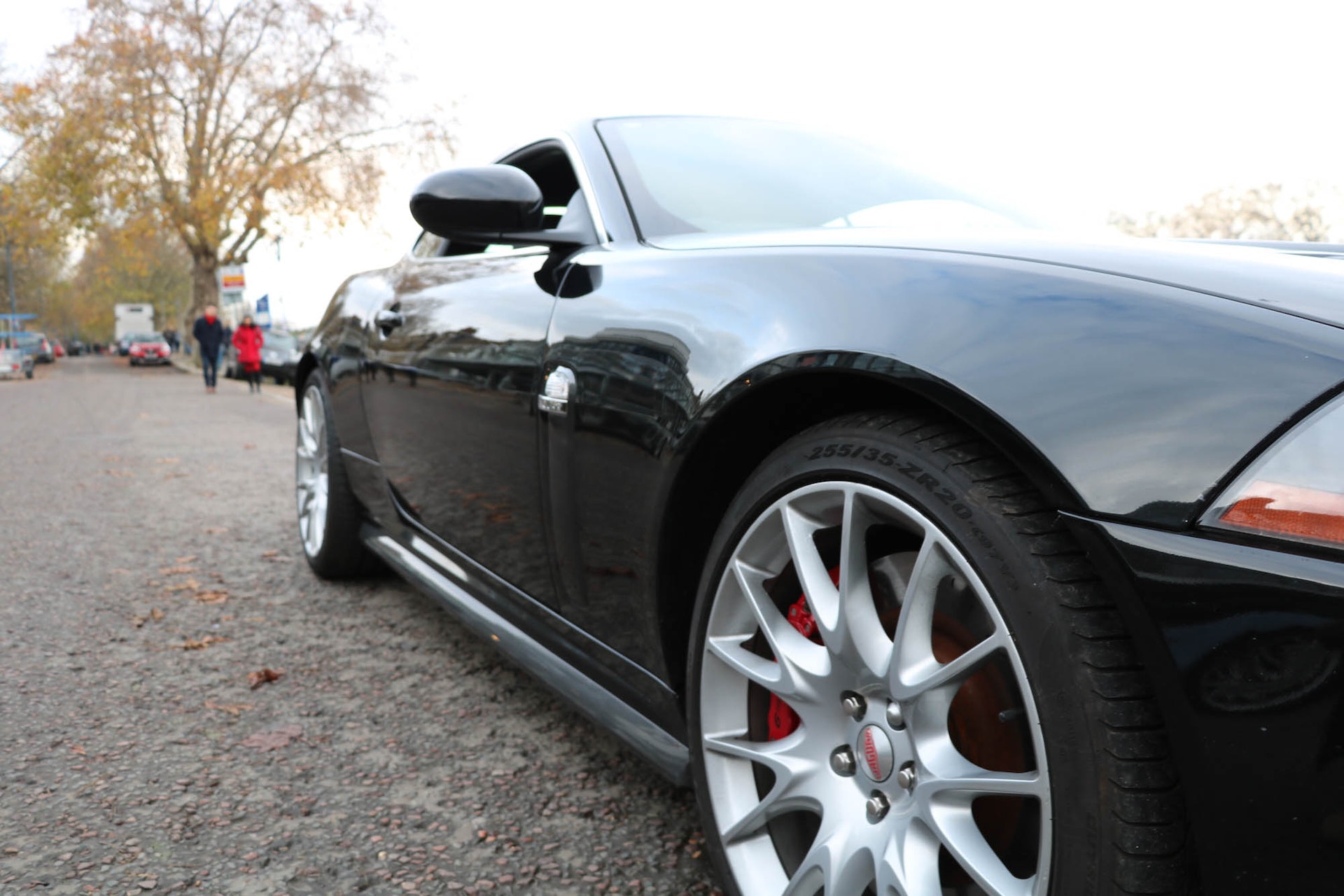 The bodywork is all original and is in sound condition. Every XKR-S was finished in the same Ultimate Black hue from the factory, and the finish on this car remains in good order. There are small stone chip marks to the front end and wing mirrors, as well as a small paint blemish on the roof. There are also minor scuffs in a few locations around the car - all of which are shown in the media gallery. The car presents very well overall, and has recent had a full Level 2 detail at Topaz in West London. 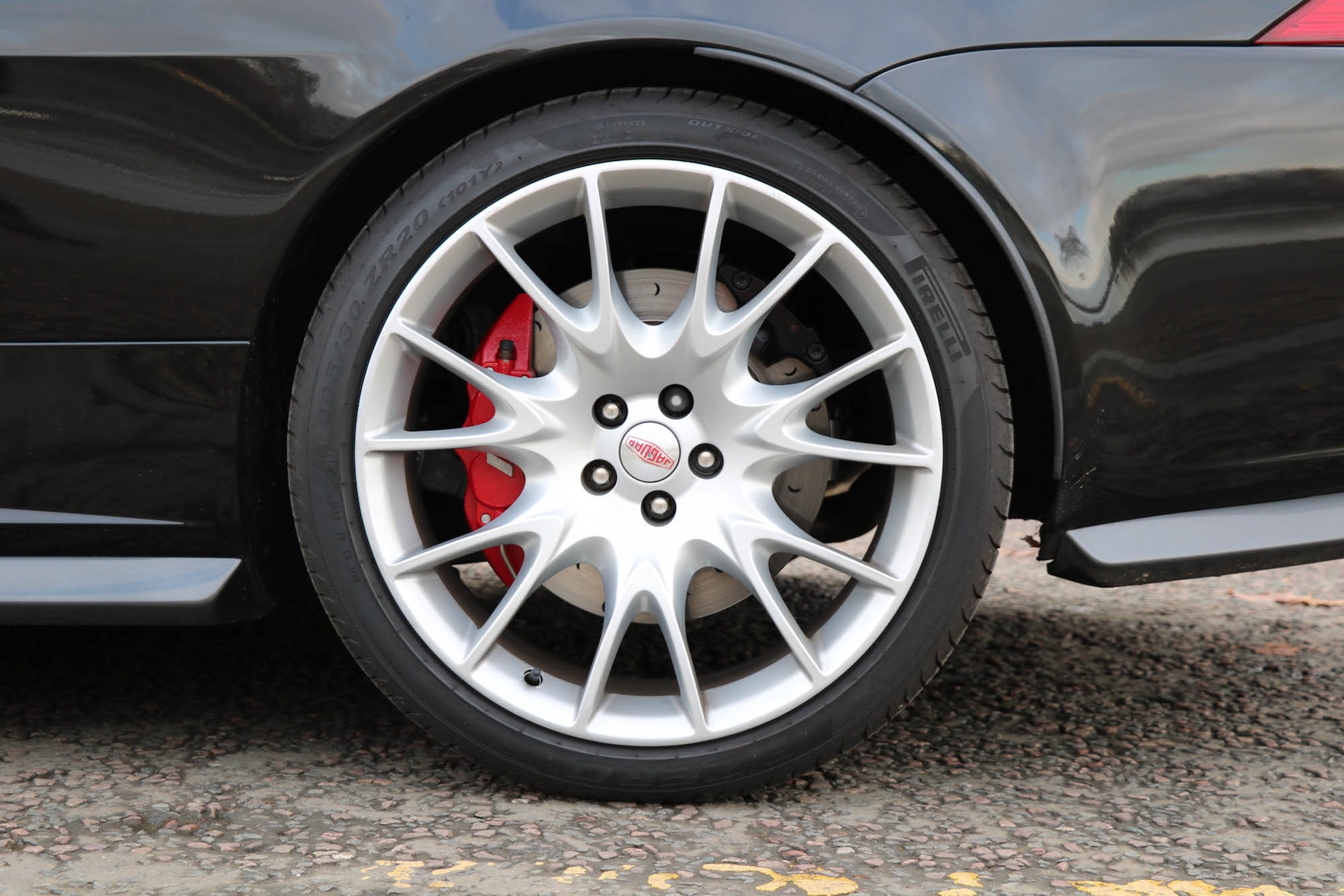 It sits on the original 20-inch forged alloy wheels, which have evidently been professionally refurbished and are in pristine condition. All of the light lenses and body seals are undamaged and in great shape, and it is equipped with a genuine Jaguar OEM sports exhaust. 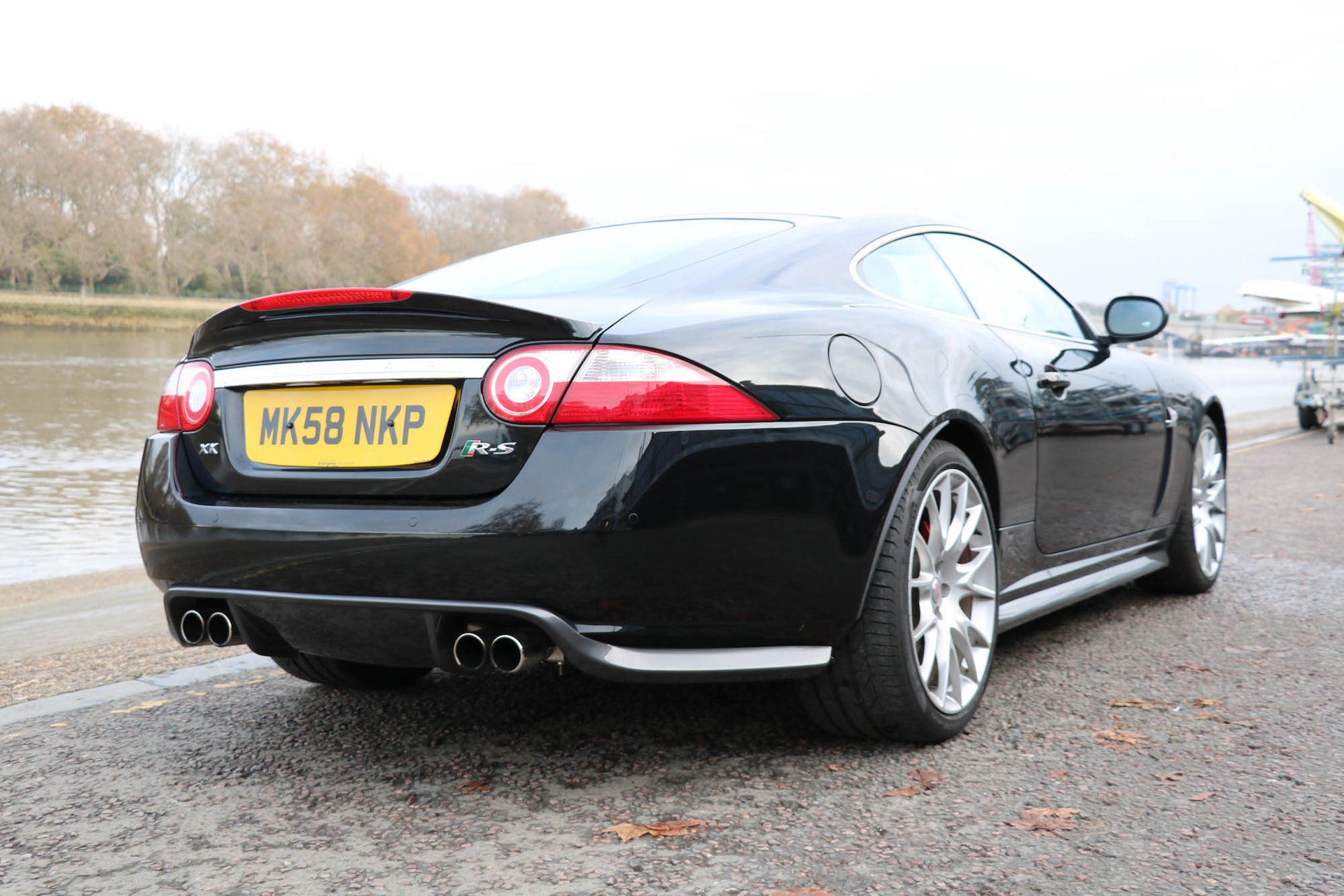 The interior of the XKR-S received the ‘Portfolio’ treatment from Jaguar, incorporating full black soft-grain leather upholstery with perforated centre panels and double-stitched seams in white thread. The trim is in superb condition, with only very light wear from use that you would expect. 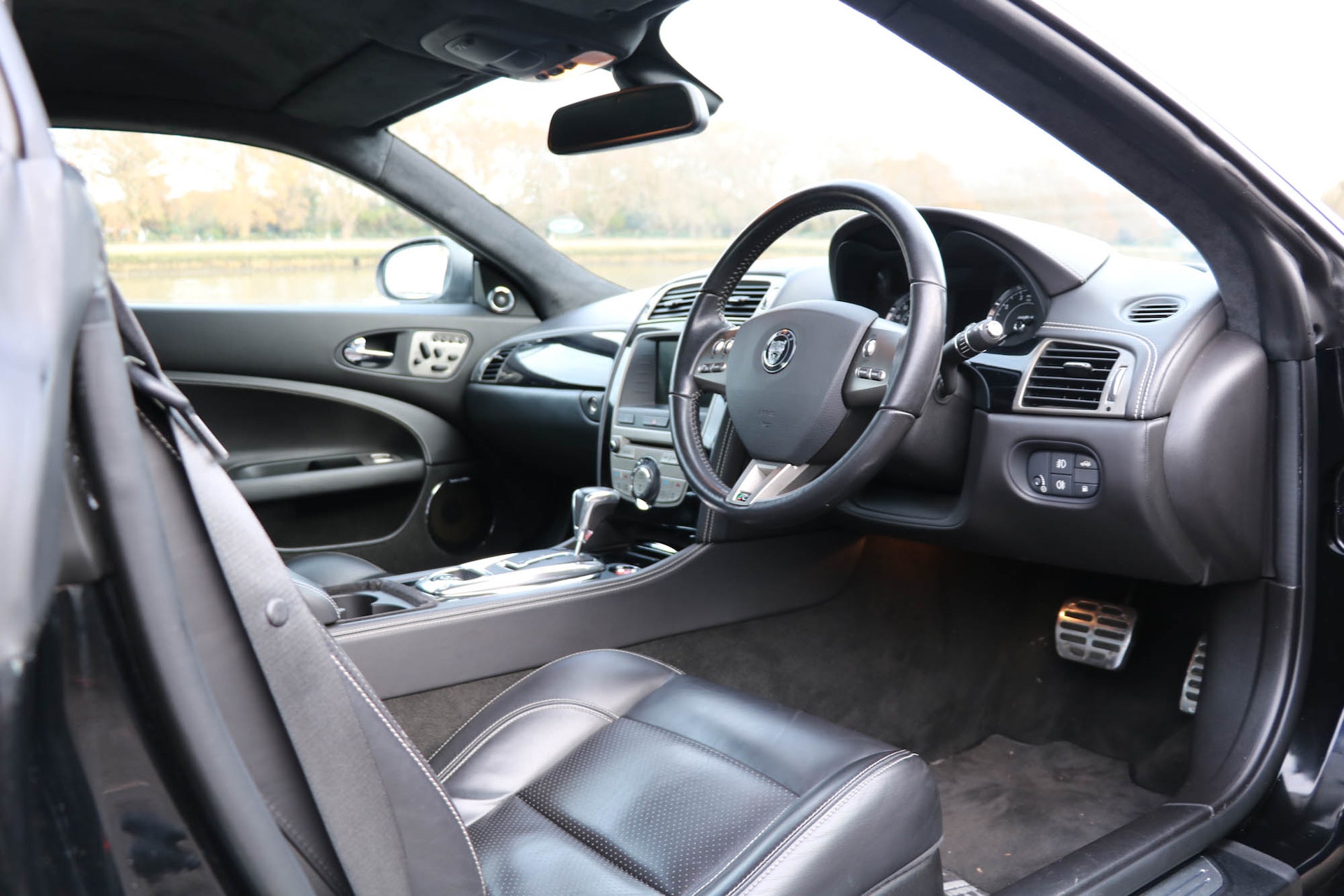 Piano Black veneers enhance the appearance of the dashboard and centre console, while the headlining is trimmed in Alcantara. Ahead of the driver is the original three-spoke leather-trimmed steering wheel with paddle-shift selectors. The car also has push-button start. 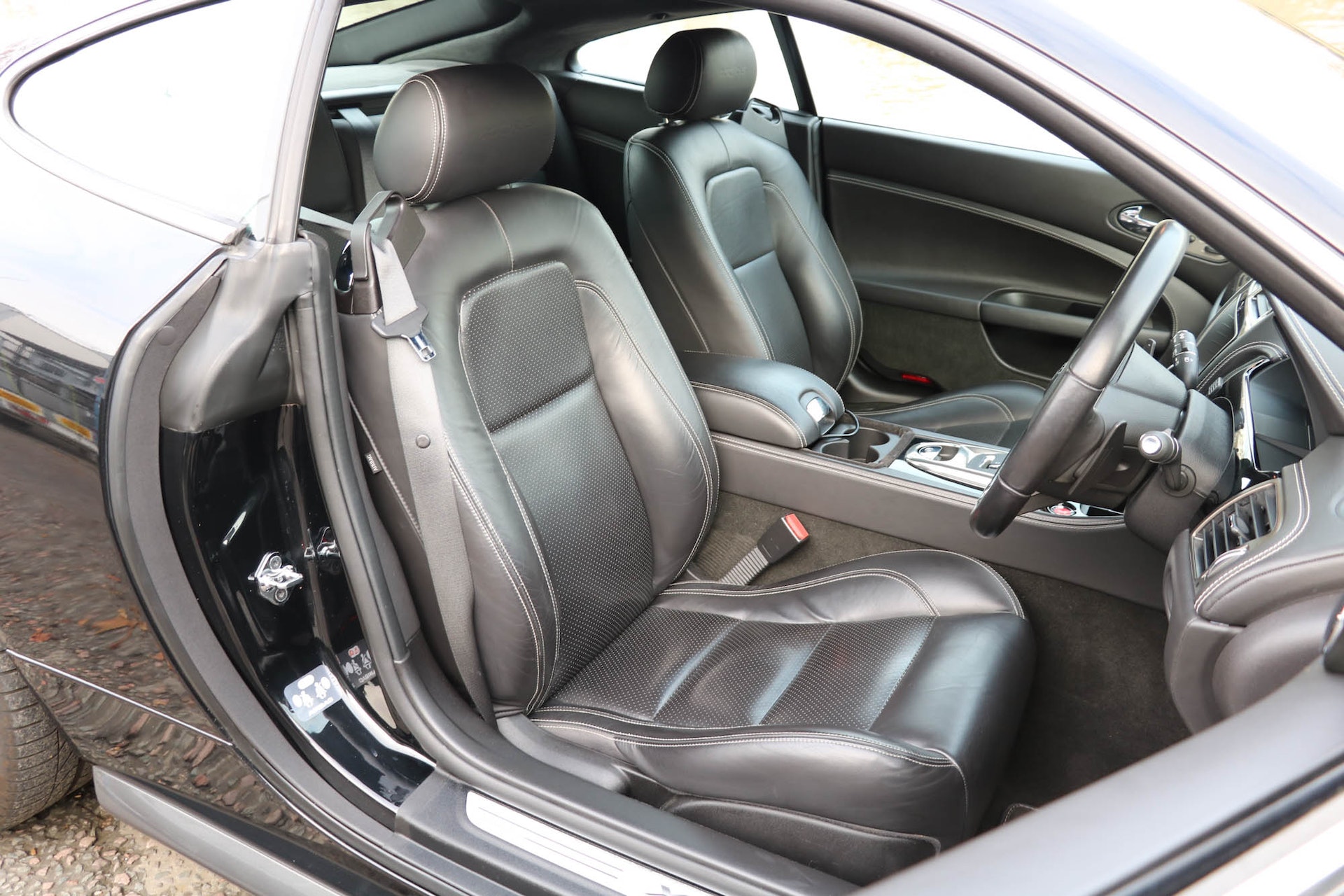 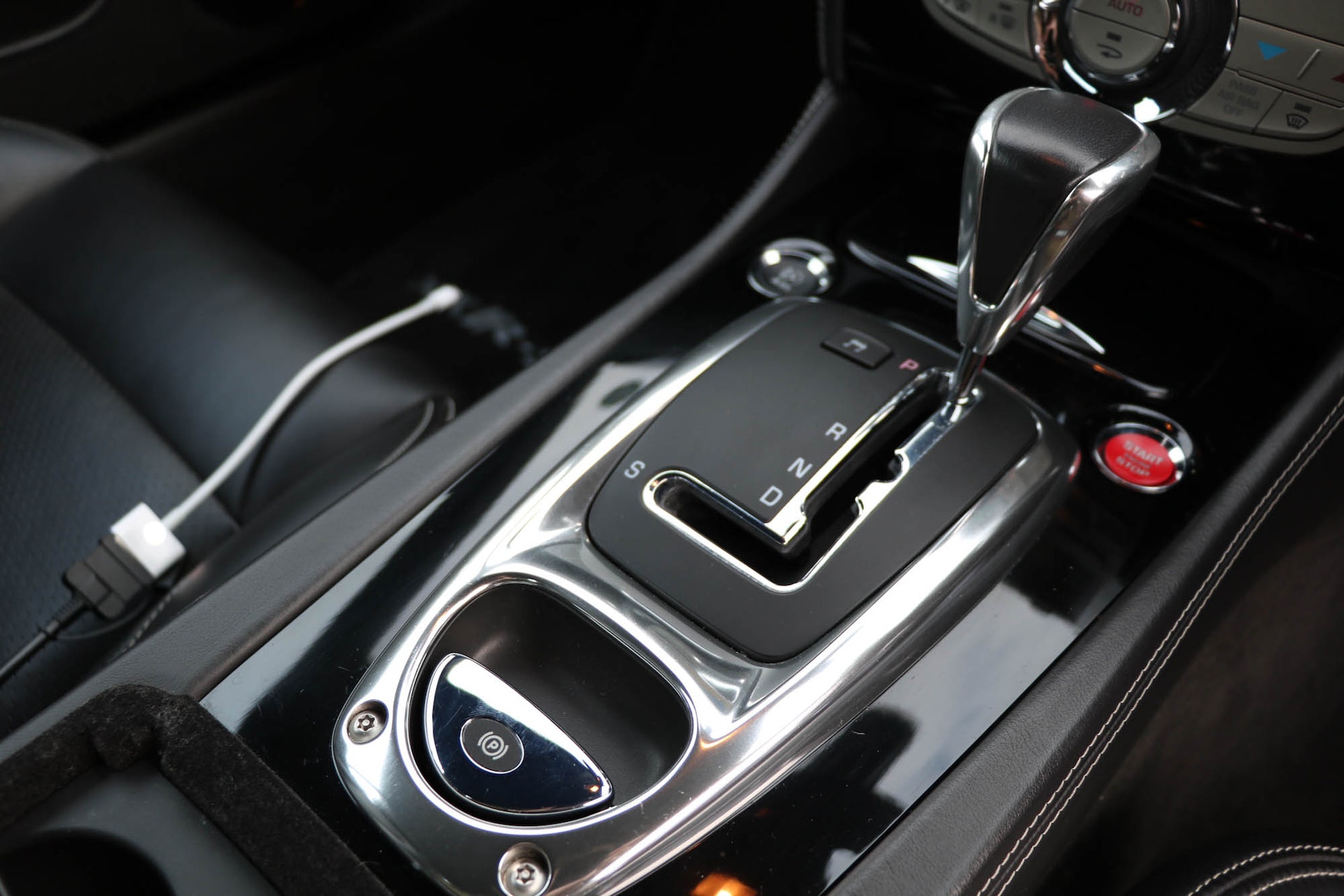 The most recent scheduled maintenance was in November 2018 at 65,166 miles. This was carried out by specialist JAGtechnic in Eastbourne and comprised a full oil and filter service. The vendor also advises that the brake discs and pads were all renewed very recently, along with the tyres. The Jaguar sports exhaust was also fitted, though the original system is also included in the sale. There are numerous old invoices in the history file for other work carried out. 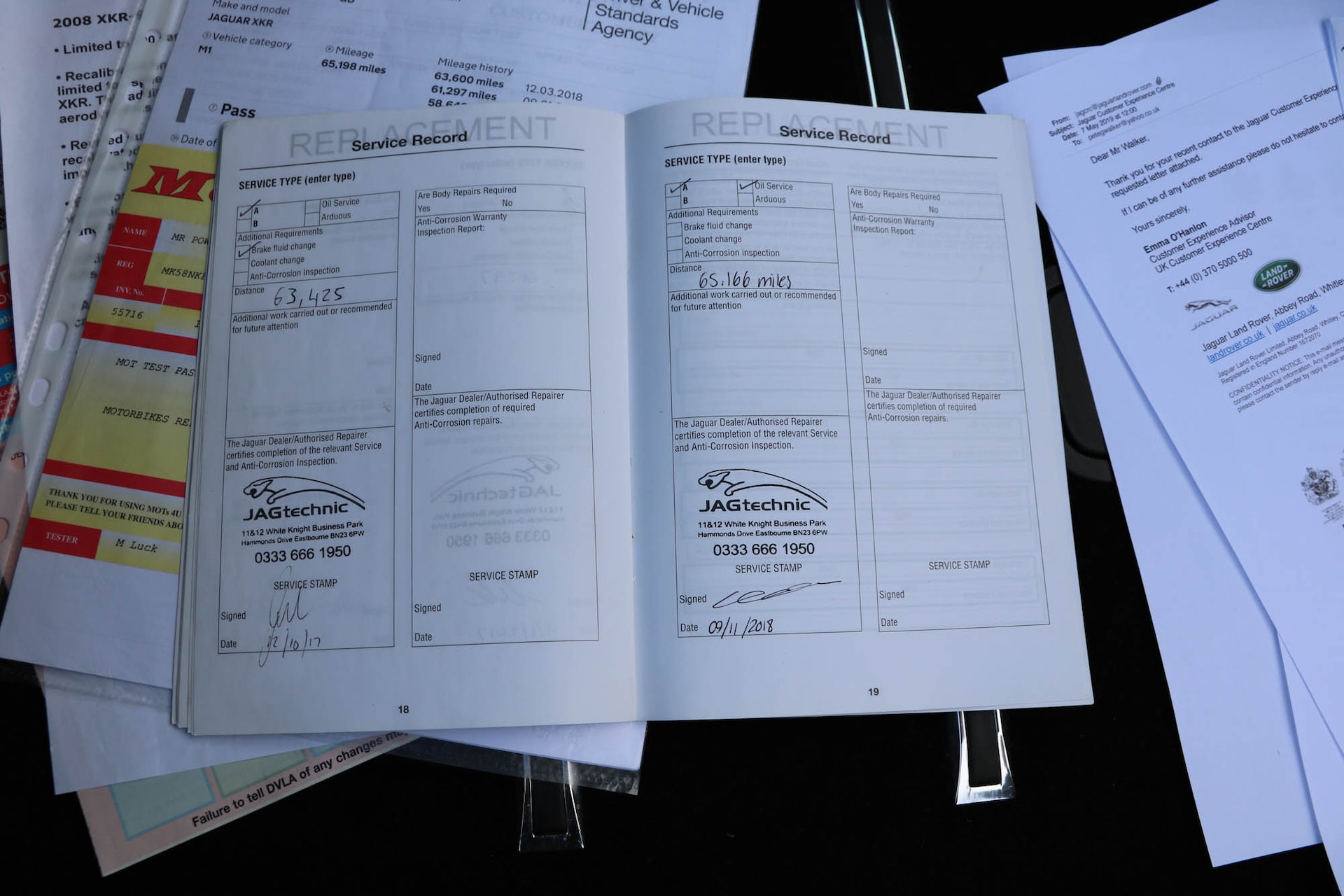 Its last MOT test was on 20 March 2019 at 65,198 miles, which resulted in a clean pass with no advisories. In fact, over the last five years covering some 8,000 miles, the car has passed each test first time around and with no alerts or warnings whatsoever. 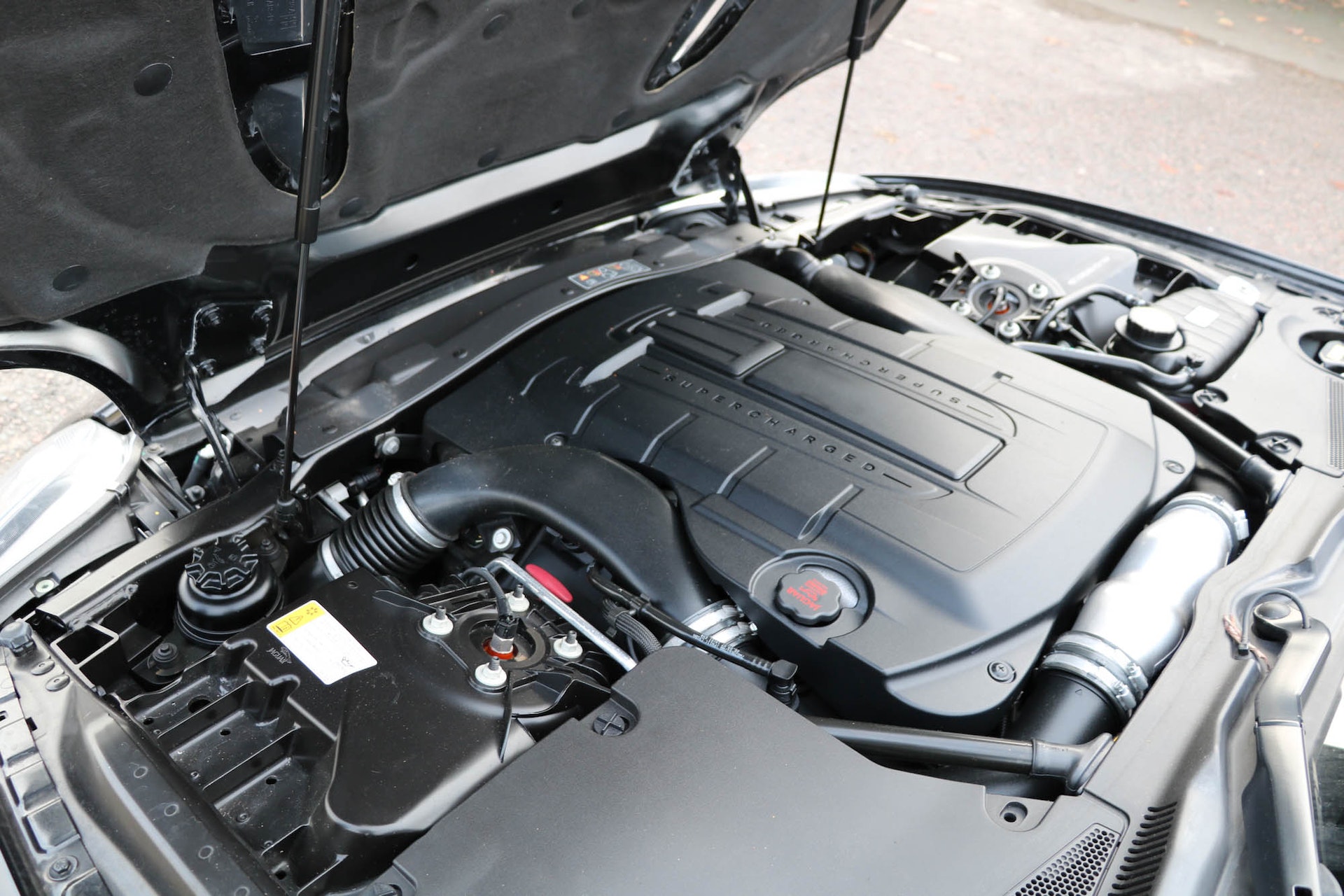 The alloy wheels are fitted with a set of Pirelli P Zero tyres in size 255/35 ZR20 at the front and 295/30 ZR20 at the rear, which are all in good condition with plenty of tread remaining. Accompanying the car is the original book pack, including the XKR-S owner’s manual, stamped maintenance record and other sales literature. 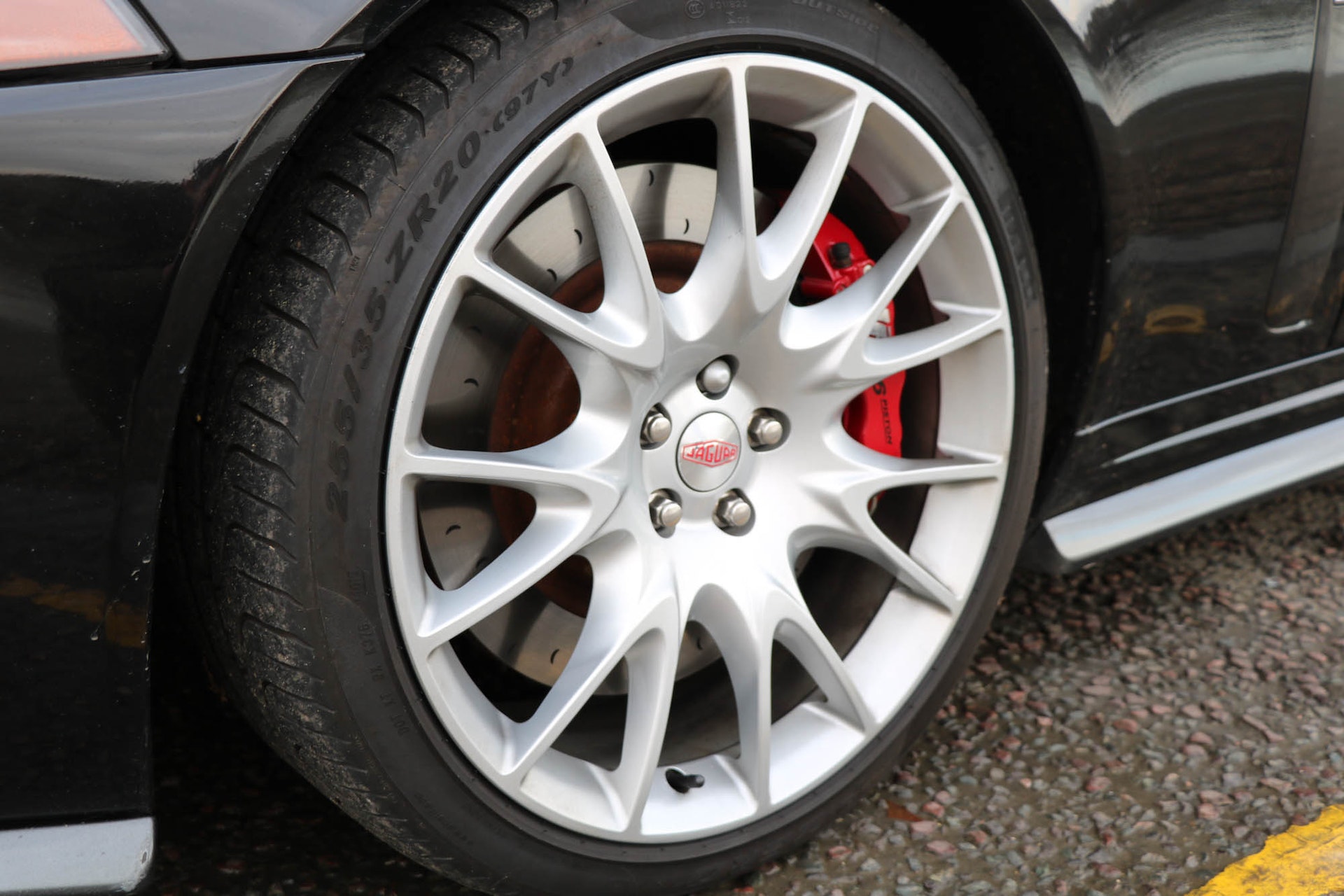 The XKR-S was very well received by the media on the launch, with critics praising the significant chassis improvements in particular. Writing in period, CAR magazine’s Ben Barry said: “We already liked the XK but these well-thought out revisions transform a rewardingly agile GT into an even more rewarding driver’s car without compromising the base car’s well-rounded character.” 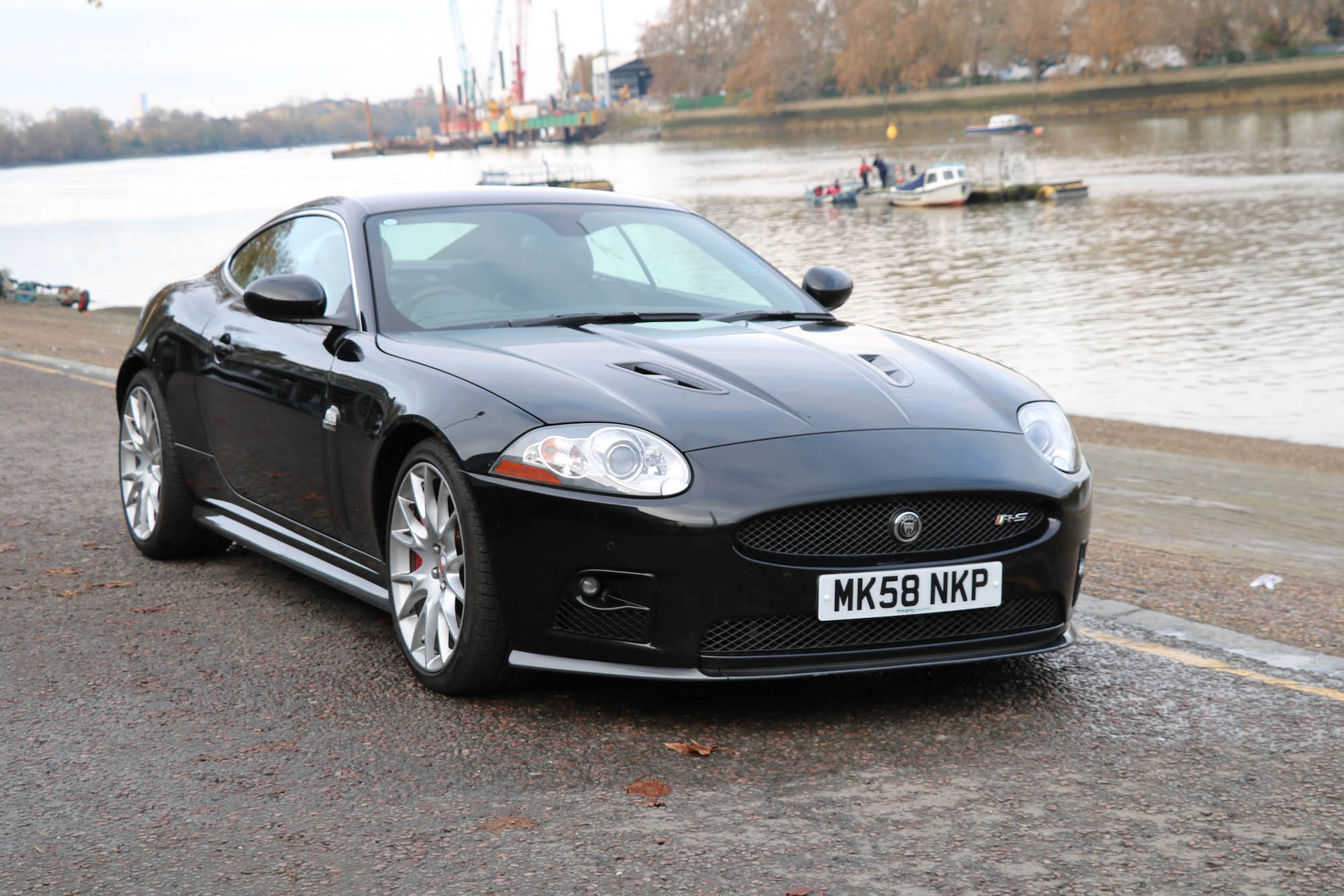 This Jaguar XKR-S is an impressive V8 performance car, boasting a unique chassis setup within the X150 generation of the XK, and an undeniably handsome appearance. The rarity of these cars means they do not come to market very often, and this is evidently a well-maintained example that is ready to delight its next owner.