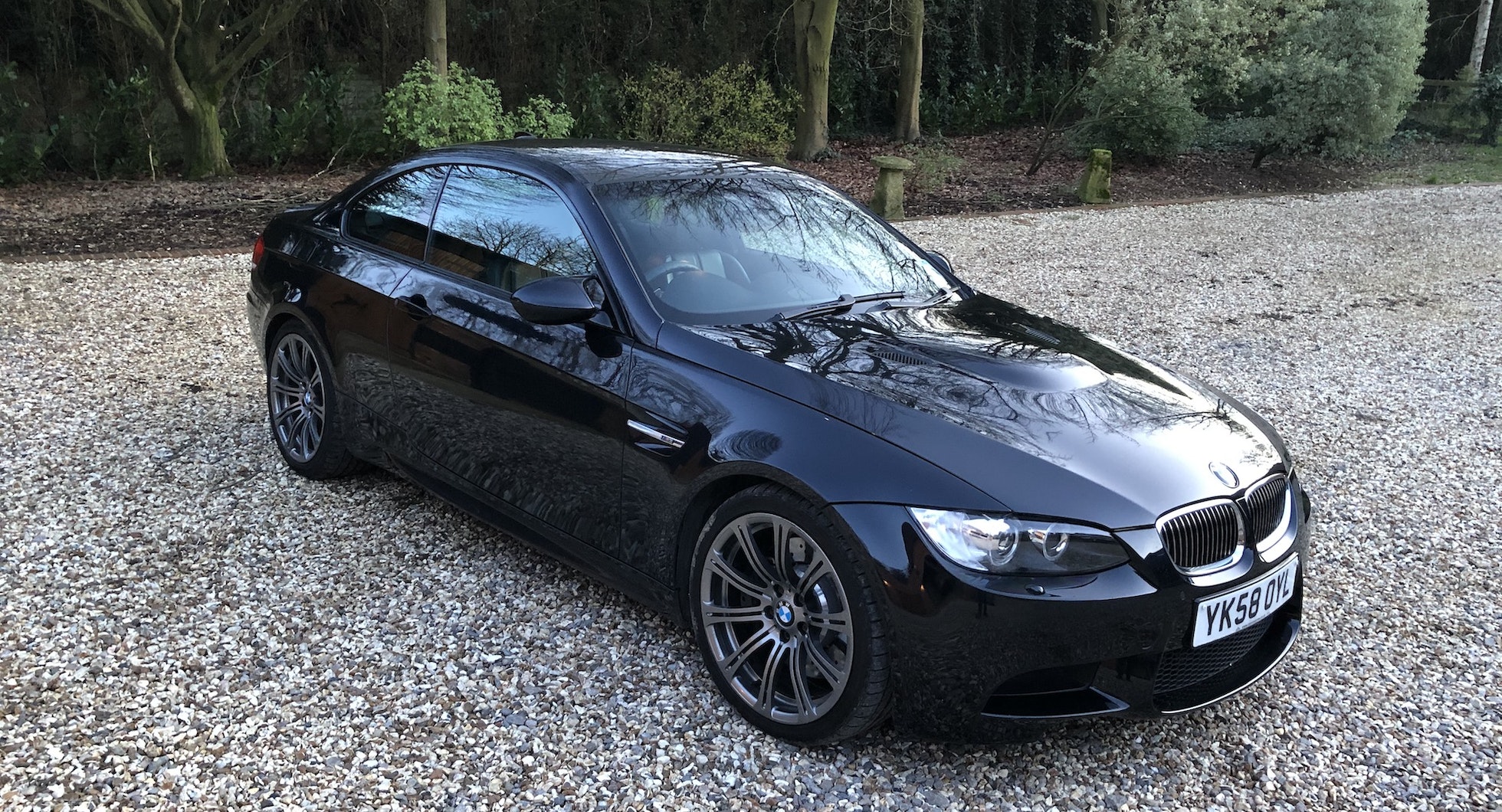 This 2008 BMW (E92) M3 is a sound example of a powerful and reliable daily driver that has been used and enjoyed as intended. It is powered by the 414bhp 4.0-litre naturally aspirated S65 V8 engine, driven through the dual-clutch seven-speed Getrag semi-automatic transmission — an option at the time and the first BMW to offer this. The odometer shows 128,390 miles from new, which is supported by the service history. 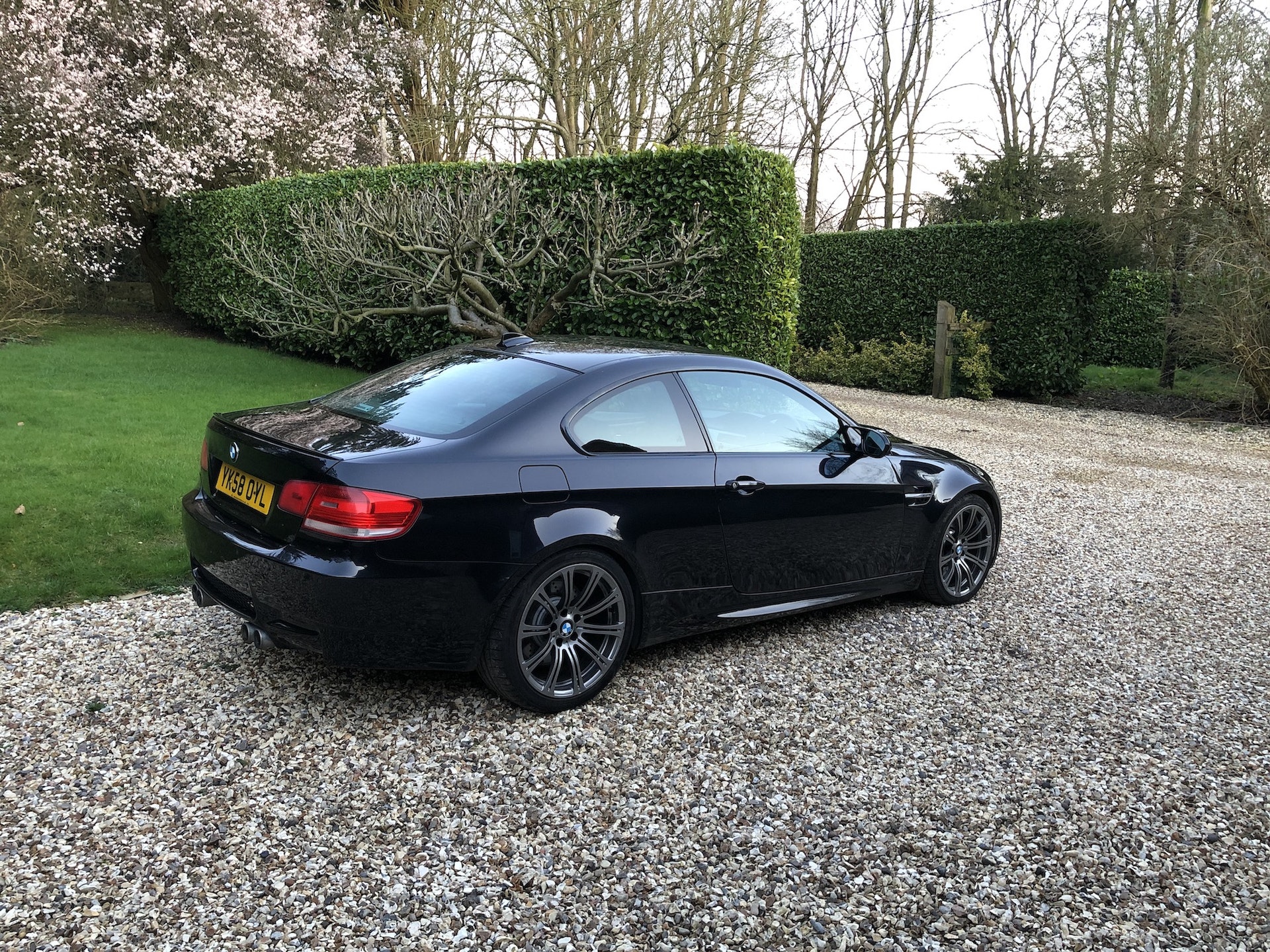 According to the vendor, the car was delivered new to Barons BMW Hindhead who briefly used it as a demonstrator following its first registration in September 2008. The current seller purchased the car from BMW Hindhead 11 years ago and has put over 123,000 miles on the odometer since then — a testament to the comfort and drivability of this M3. 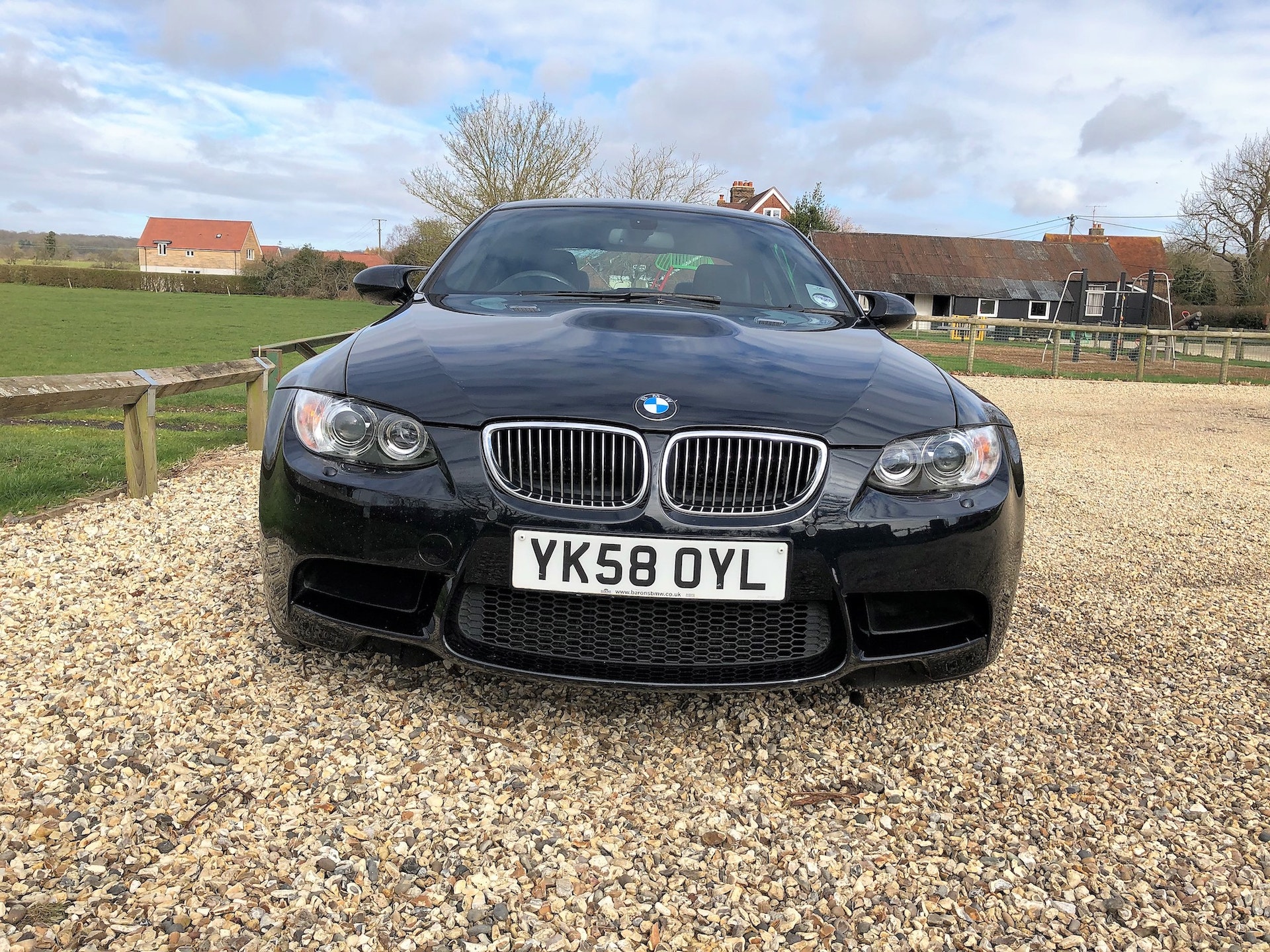 Its bodywork and Jerez Black paint are described as being in generally good order, but it could be brought up to a higher standard in the future. There are some stone chips on the nose and bonnet, the offside front wheel arch has some scuff marks, and there are some marks and chips on the wing mirrors. The car has never been repainted, and so presents as an honest and well-used example. 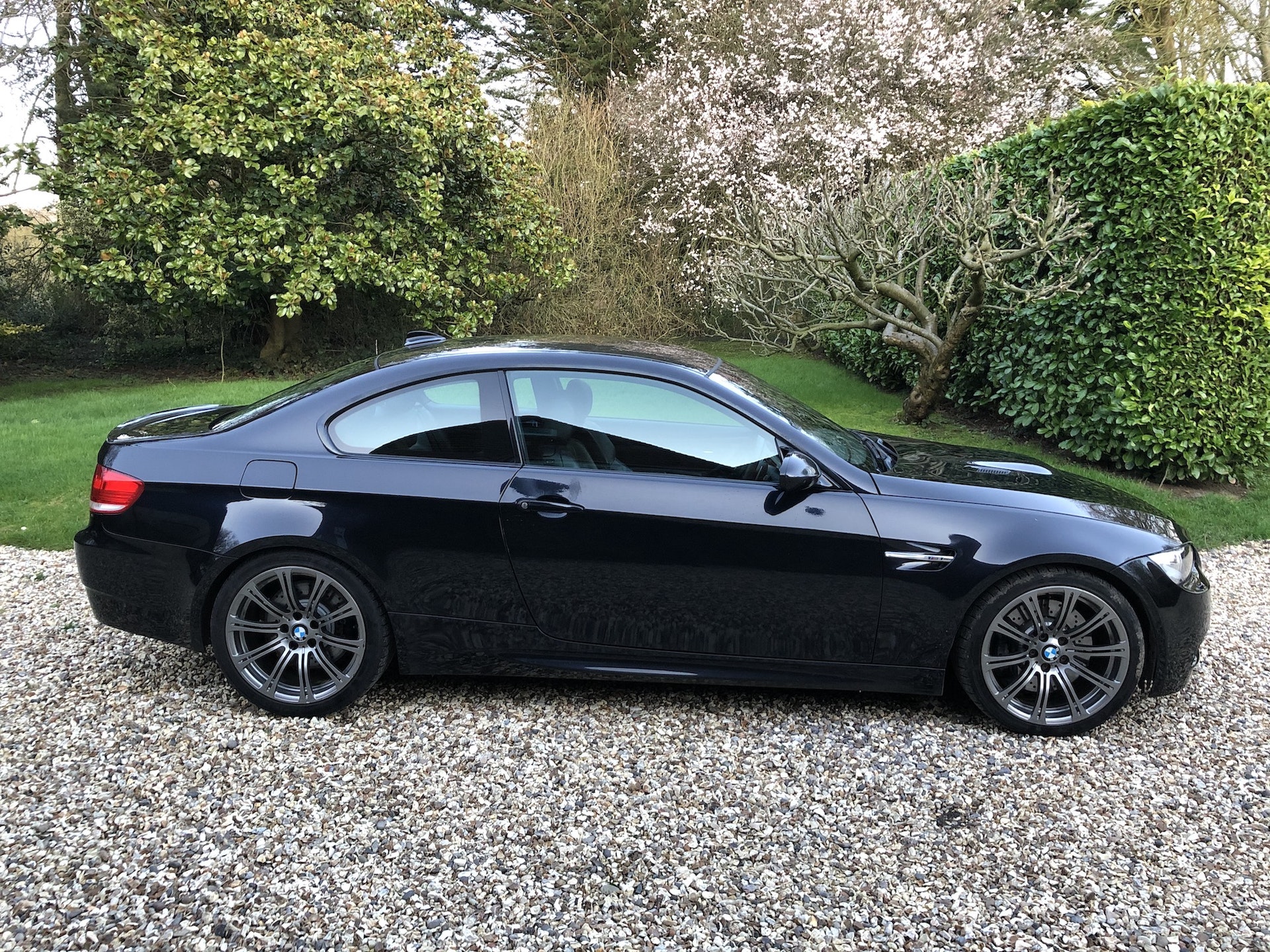 The door jambs, bonnet and boot shuts all appear to be in decent condition. The car sits on 19-inch split-spoke alloy wheels, which do show some kerb marks on them. The alloys are shod in 245/35 ZR19 tyres in the front, with 265/35 ZR19 items at the rear, which all have around 5mm of tread remaining. 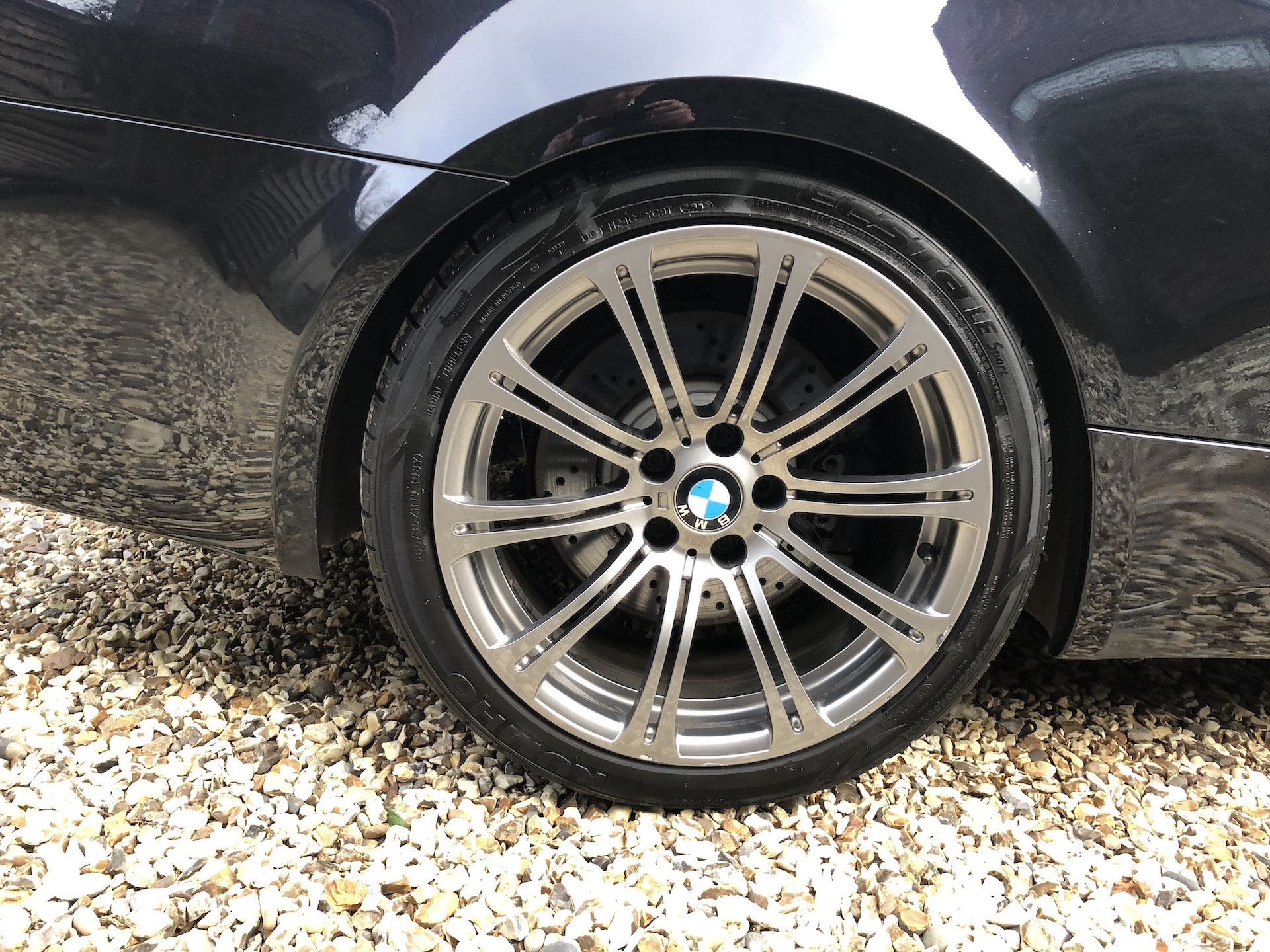 The black leather seats are described as being in sound condition, with a fair amount of wear and scratches on the driver’s side bolster, as well as a few scuffs on the passenger seat. While the appearance is in line with the mileage, a professional re-connolising treatment could make a significant improvement. The rear seats present well, with only a few marks present. The door cards are in good condition, with a few marks on the armrests, and the steering wheel shows signs of wear. 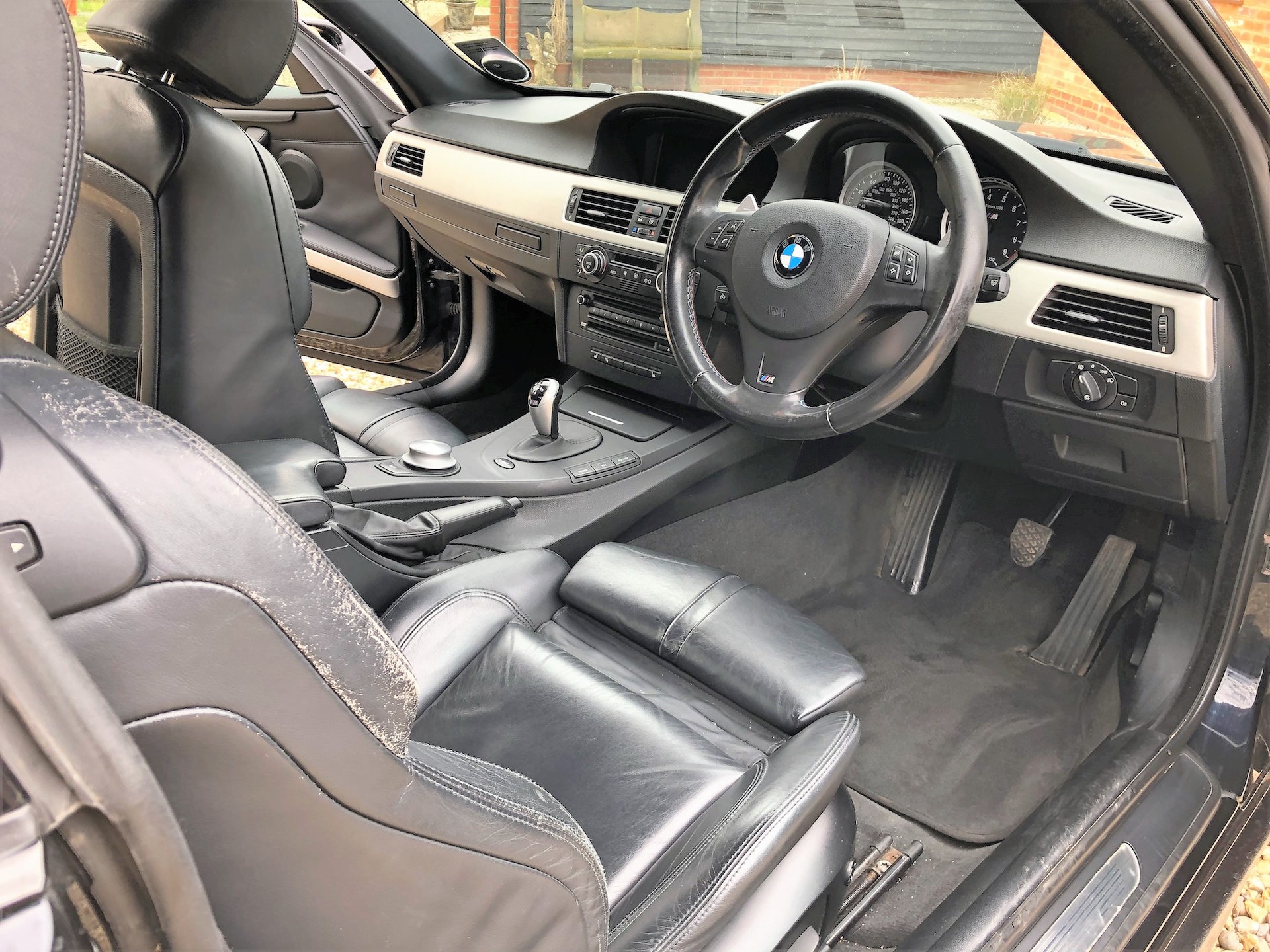 Factory-fitted equipment includes Electronic Damper Control for optimised handling, satellite navigation, climate control, cruise control, and three-stage heated front seats with electric adjustment. The in-car entertainment is a four-speaker surround-sound system with AM, FM and DAB digital radio, which was modified by BMW Hindhead to connect to an iPod. This can be reversed to link to the factory-fitted six-disc CD changer if required. Both the stainless steel kickplates are in good condition, with some marks and paint peel. The spacious boot, which can be extended when the rear seats fold down, has the optional through load capability with the rear seats in place, and is clean and tidy, with only a few stains on the lining. 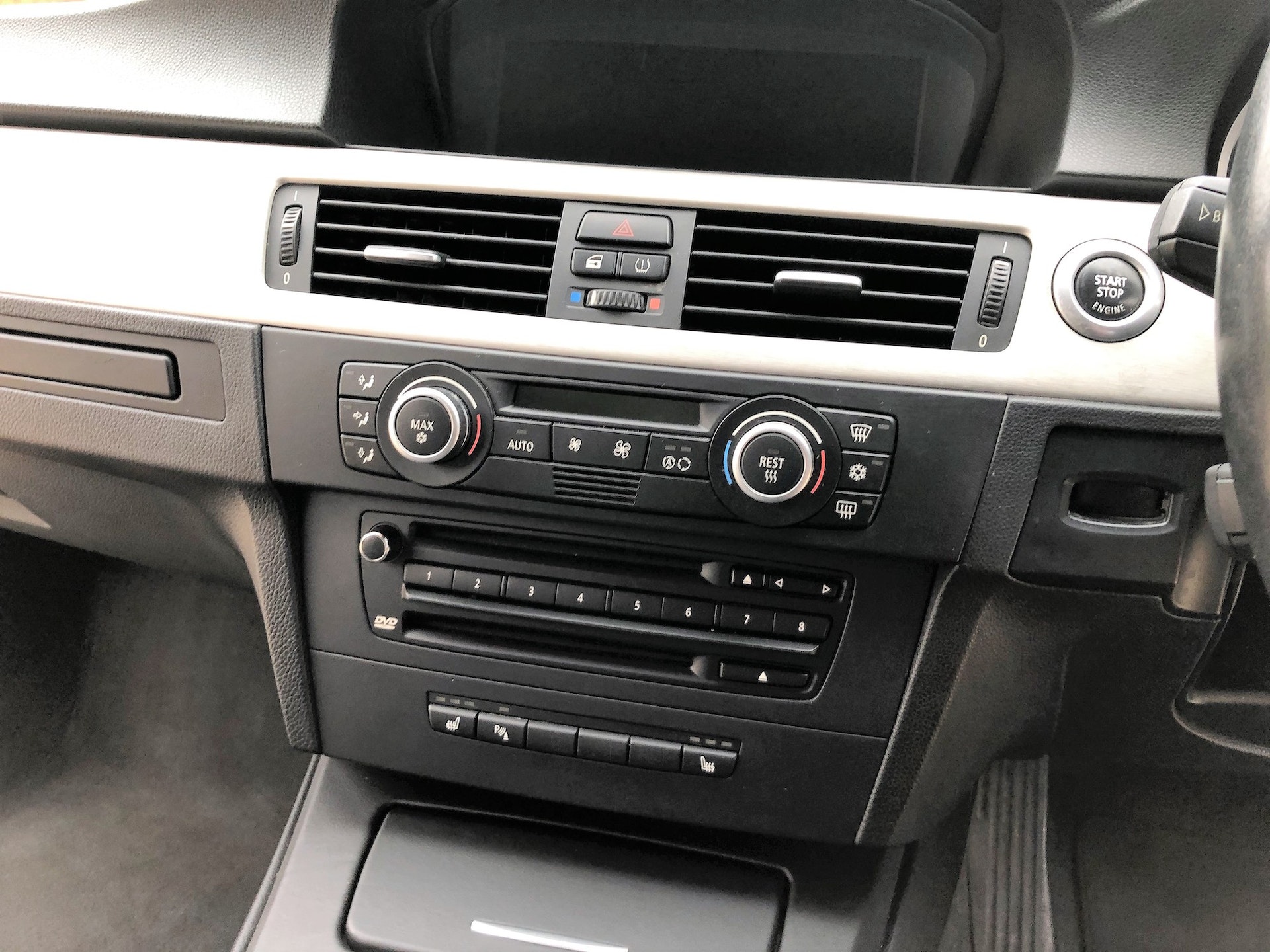 The chassis and suspension mountings are described as being in good condition, and the engine bay is tidy but in need of a detail. Its last MOT test was in December 2019, which resulted in a first-time pass with only a single advisory about a small cut in the nearside front tyre. 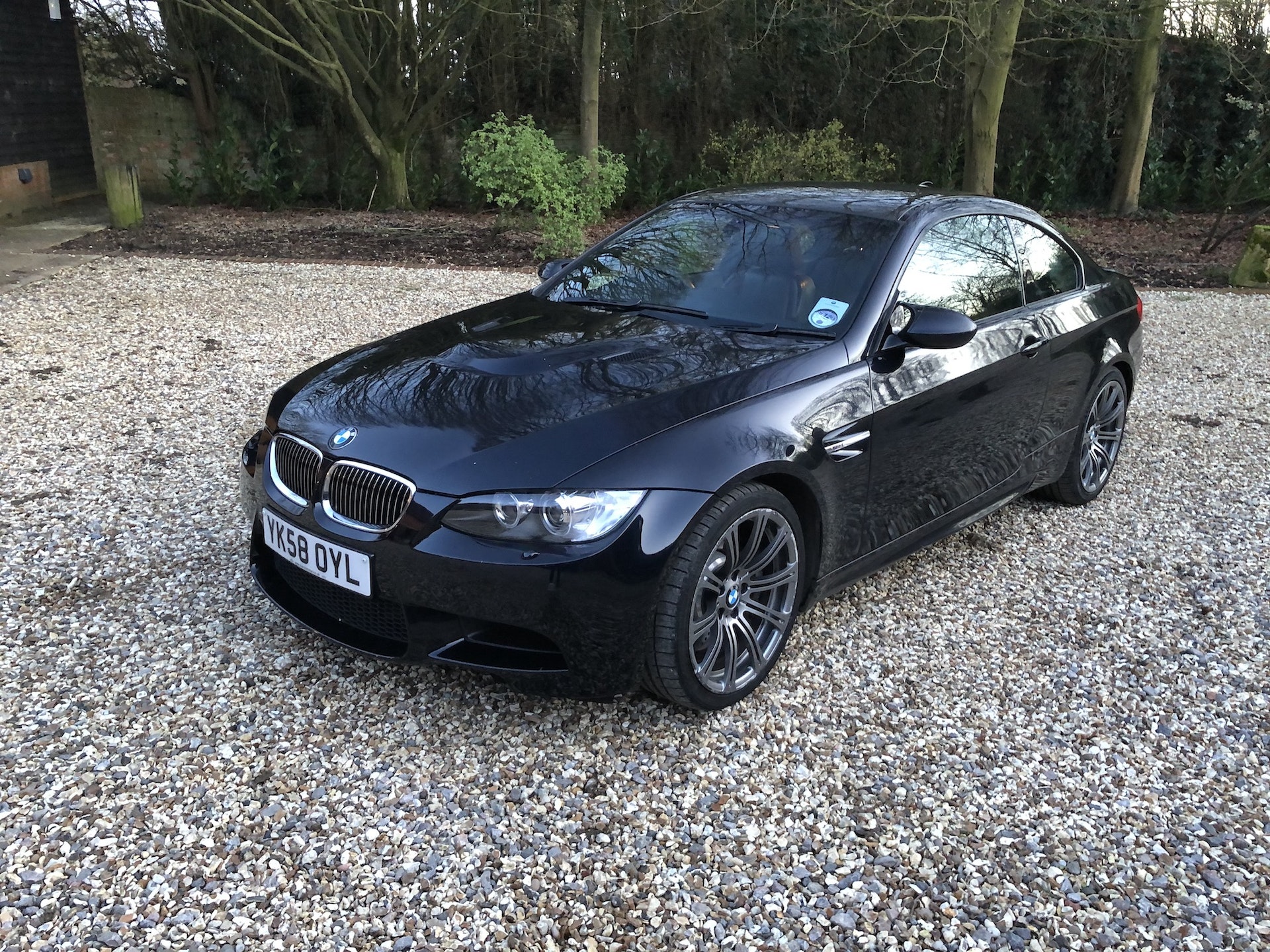 The car’s last service was performed by BMW specialist Grosvenor Motor Company in January 2019 (at 126,711 miles). The car has 10 stamps in its service book, with two missing from its history (both in 2010) while it was covered by a BMW three-year warranty. The seller states that these services occurred at a BMW main dealer in line with warranty requirements, but that the workshop manager neglected to stamp the book. In November 2018, the front discs, pads, and wear sensors were replaced, as were both headlamps. In March 2018, the alternator and battery were renewed. The car has followed a regular maintenance schedule, with the throttle actuators replaced at 83,000 miles (Bank 2) and 101,000 miles (Bank 1) and the EMS remapped in 2011 for improved economy and power. 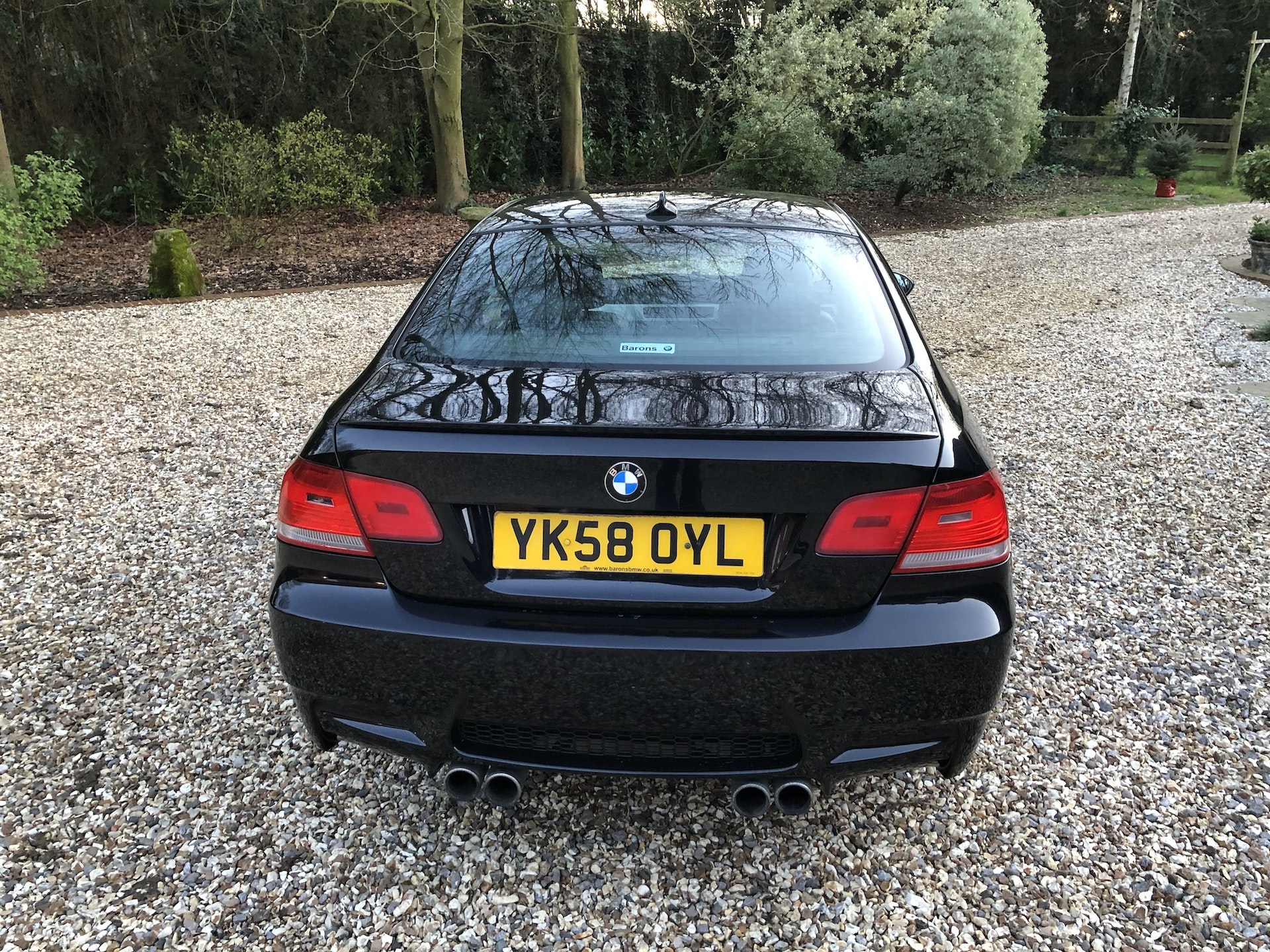 Accompanying the car is the original leather wallet containing the owner’s manual, service book and brochures, a spare key, and a history file full of the marque specialist service invoices since 2011. 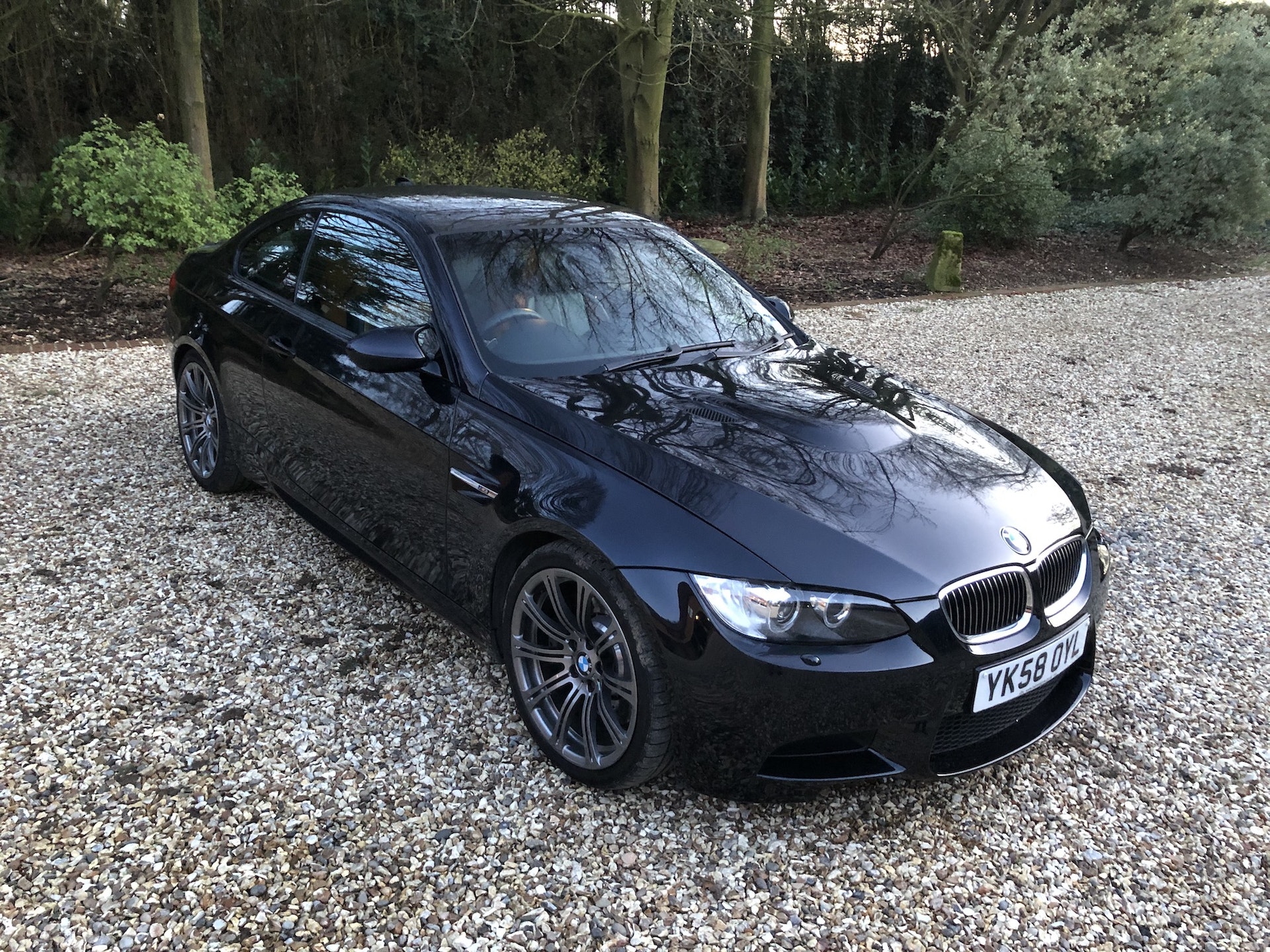 This generation M3 was a hit among journalists at launch, with Motor Trend calling it “the greatest all-around car in the world”, Car and Driver saying it is “the finest car on the market, period”, and Jeremy Clarkson once saying “this M3 is the best car, and always will be, and there’s no point in ever thinking otherwise”. This 2008 BMW (E92) M3 is in good mechanical condition, and while it could use a small amount of cosmetic attention, it surely won’t disappoint on the road.