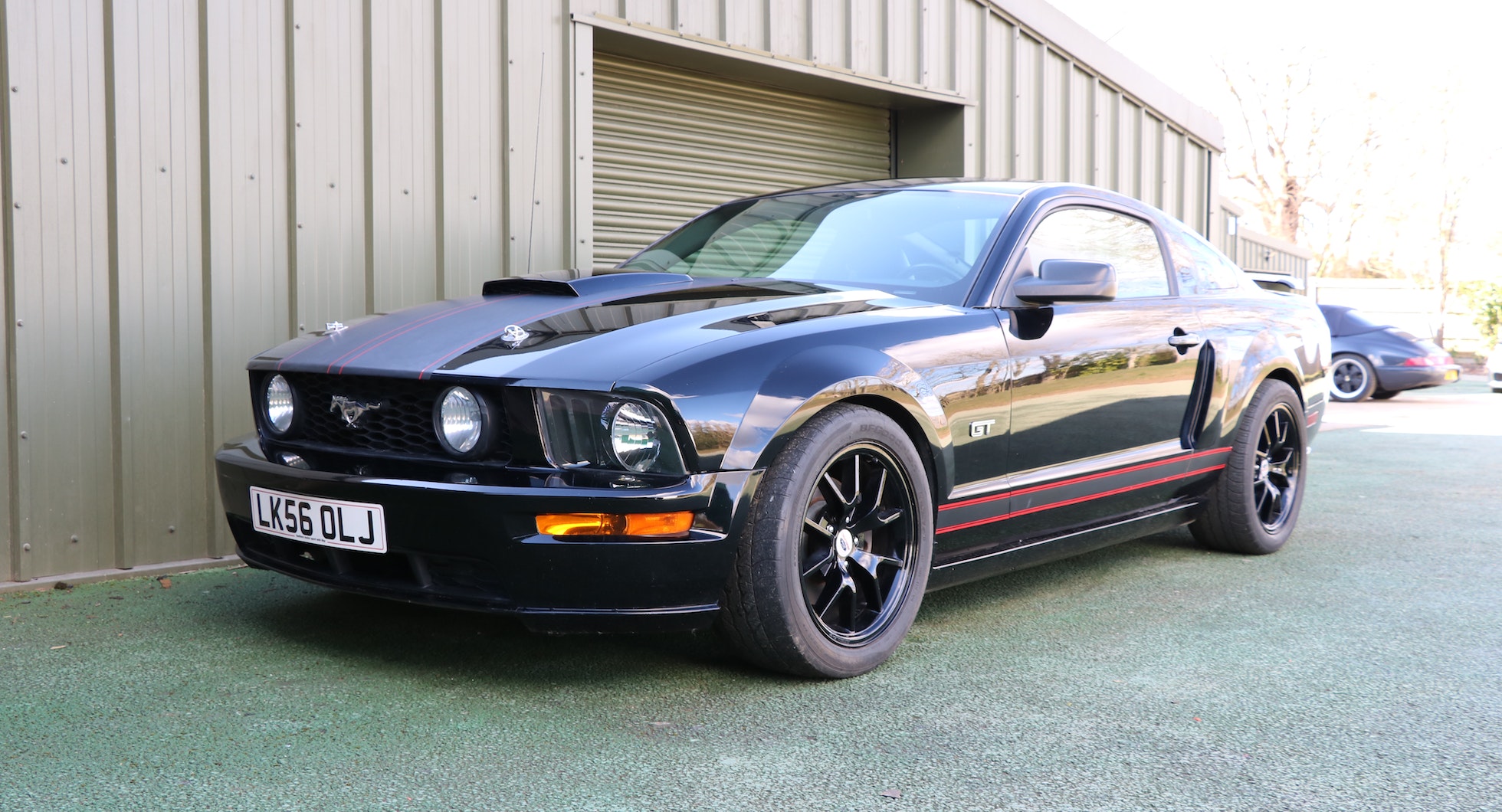 This Ford Mustang GT is a modern muscle car, equipped with desirable Ford Racing options, which would benefit from some cosmetic rejuvenation in the hands of an American car fan. It is powered by a 4.6-litre naturally-aspirated SOHC V8 engine producing 300hp, with rear-wheel drive via a five-speed Tremec manual transmission. The odometer indicates 83,333 miles from new. 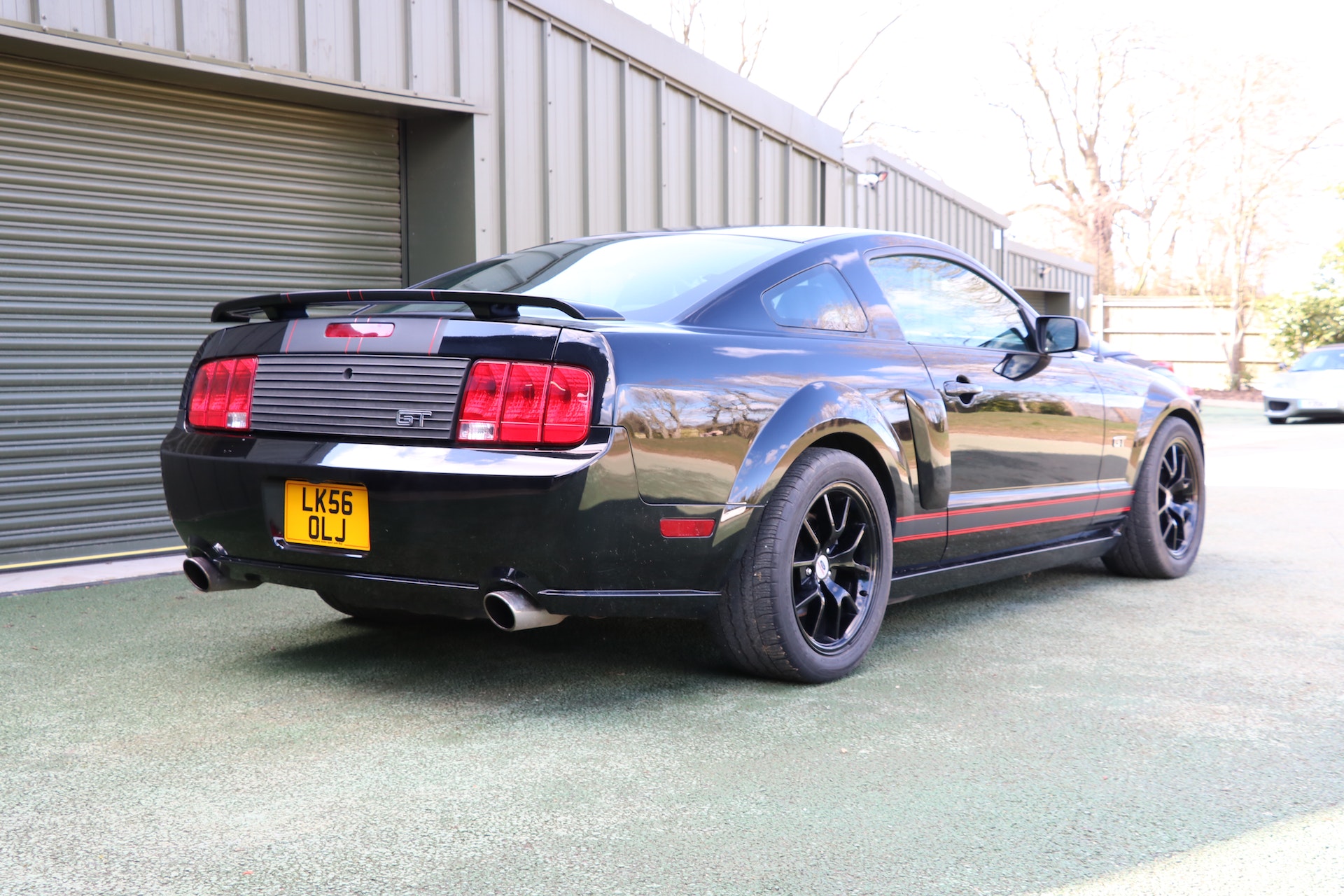 Built at Ford’s Flat Rock, Michigan assembly plant, this is an original left-hand drive example. Its bodywork was specified in black, as was the leather interior. The car currently sports matt grey and red stripes down the centre of the car, as well as along both sills, which are understood to be an aftermarket addition. It was imported to the UK in 2019, and is an EU taxes-paid and registered car. 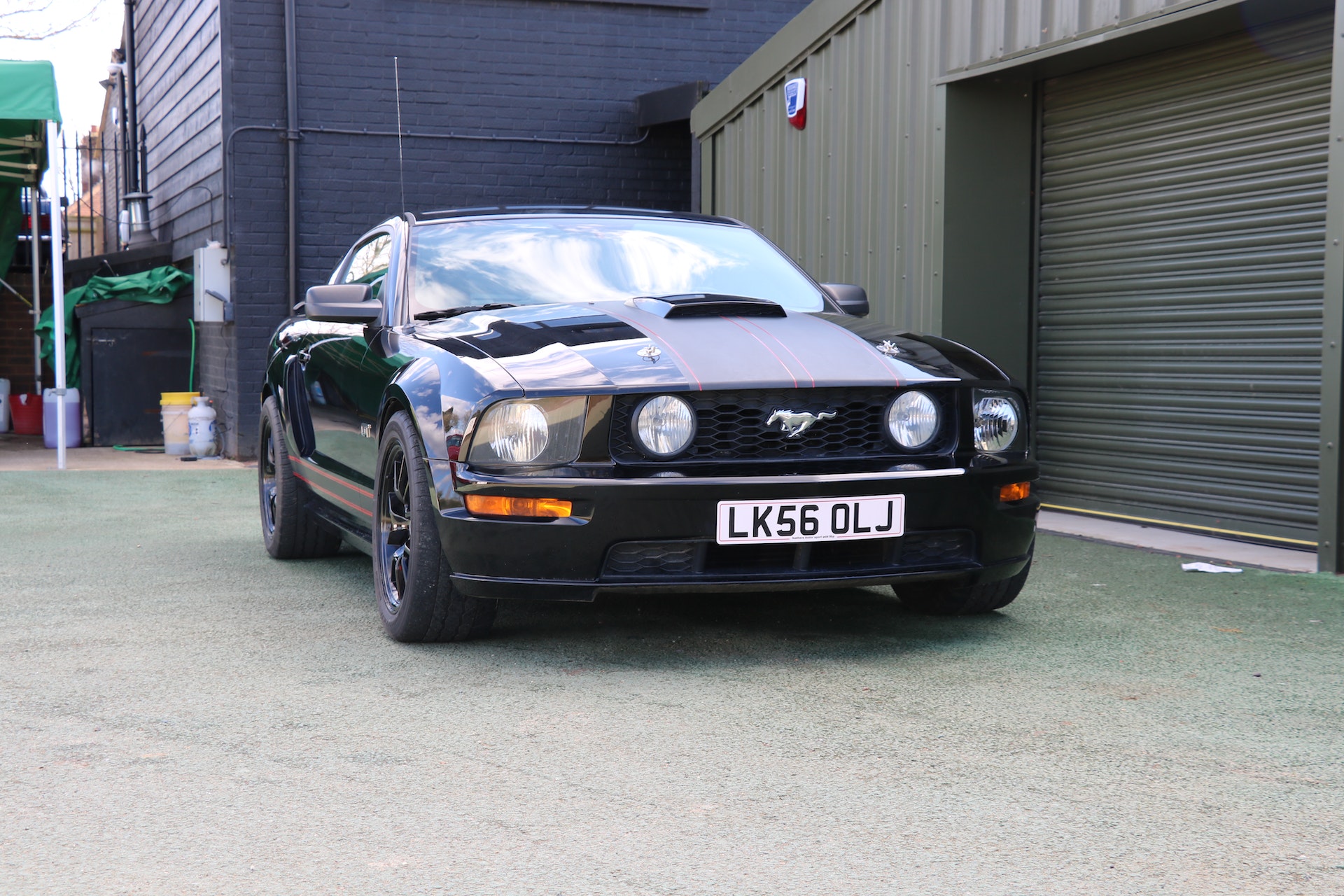 The body panels remain in good order, with no dents or damage to the metalwork. The black paint does have a few imperfections commensurate with its age and mileage, including light stone chips to the front, and some blemishes along the leading edge of the bonnet. All of the window seals are in sound condition, and the light lenses are original and undamaged. 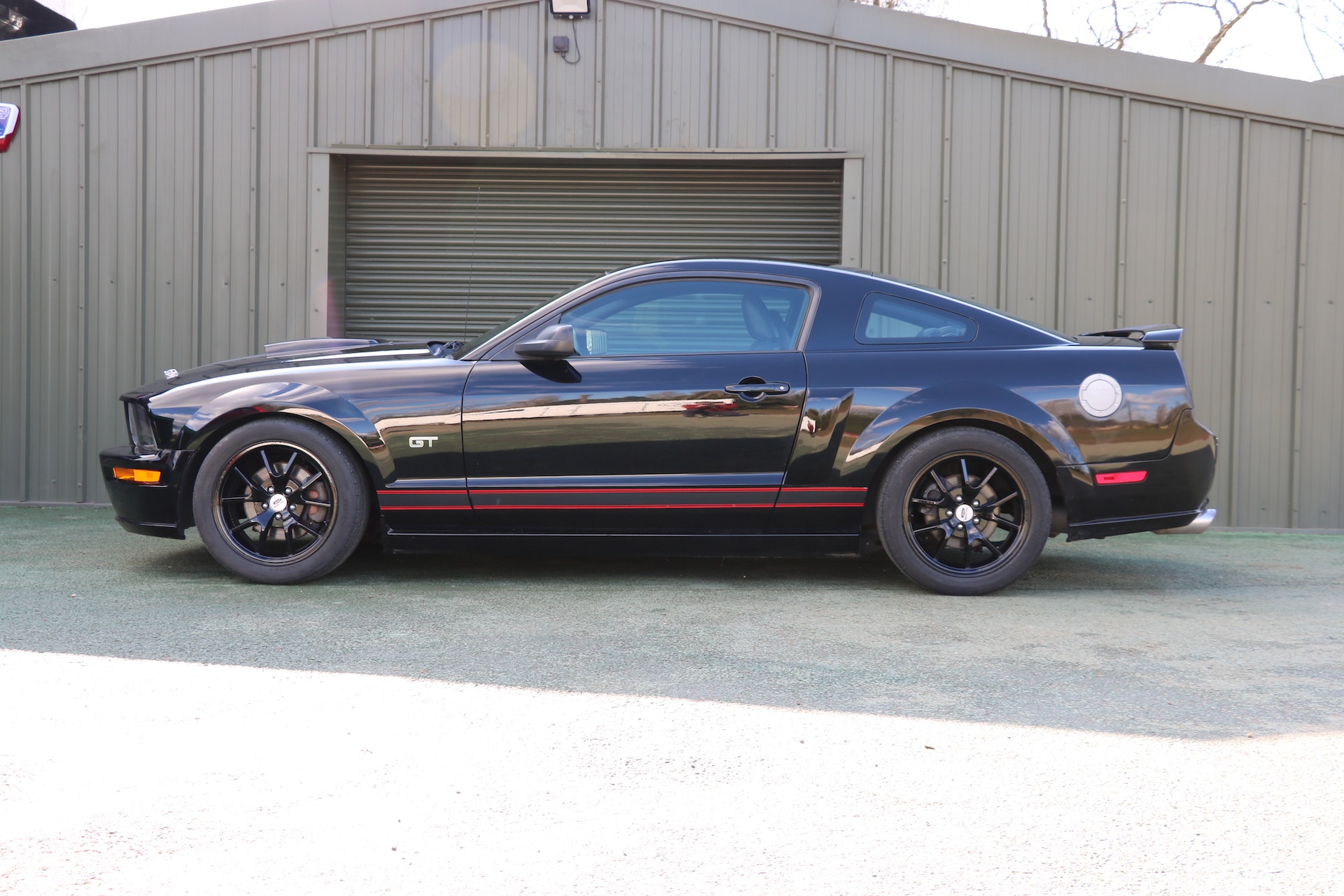 This Mustang GT is fitted with the discreet wing on the boot lid, fog lamps mounted in the grille, a bonnet scoop, and quick-release style fastening pins. The alloy wheels are wide Ford Racing FR500 Y-spoke items painted in gloss black, and the exhaust tips indicate that it is fitted with the Ford Racing axle-back exhaust system. 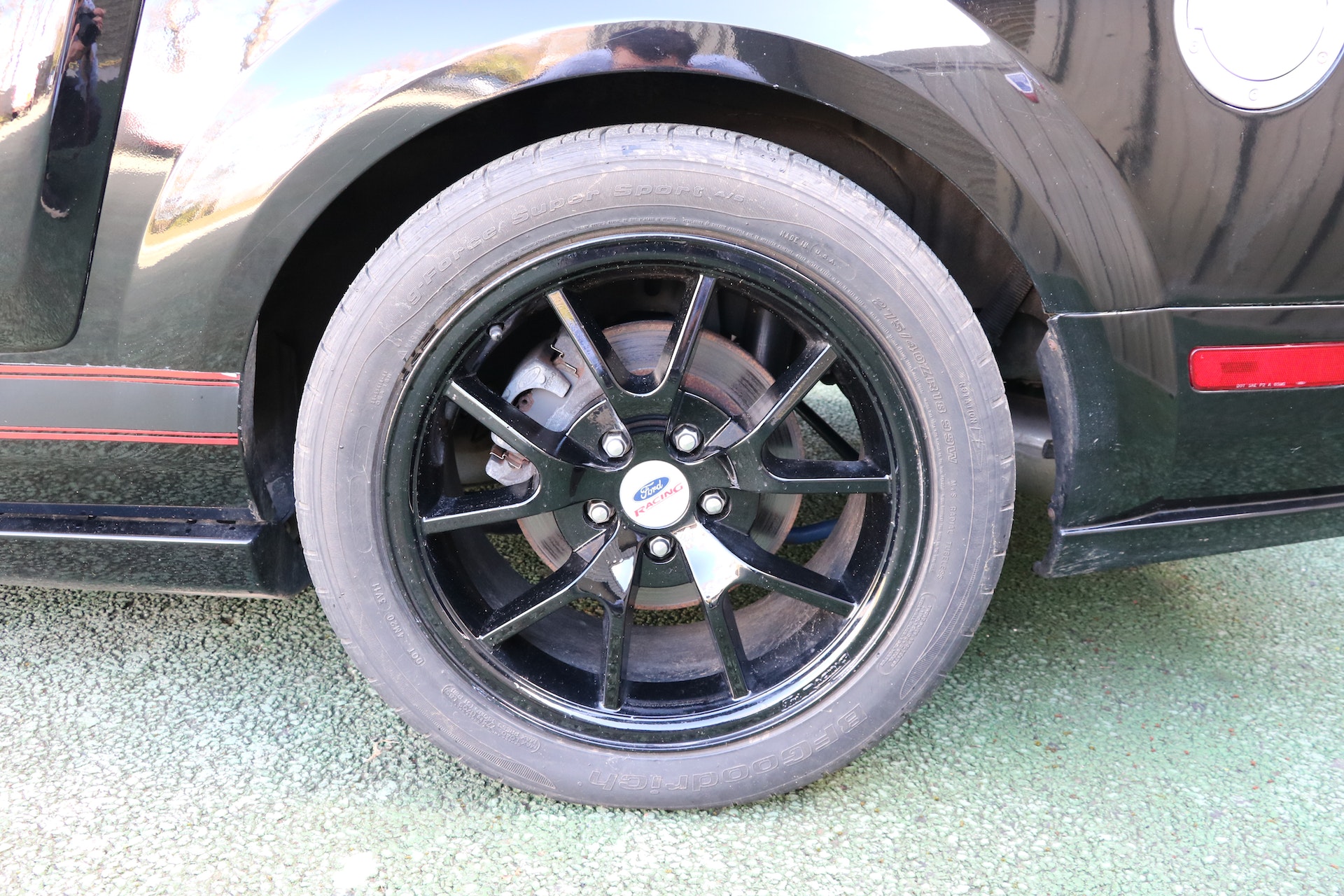 Inside, the black leather upholstery features ribbed and perforated centre panels, and is complemented by the same finish in the door panels, as well as a leather-trimmed steering wheel. The seat facings are in good order, and there is just some common wear to the driver’s seat side bolster - but no rips, holes or other damage to the material. The rear seats appear to have been barely used. 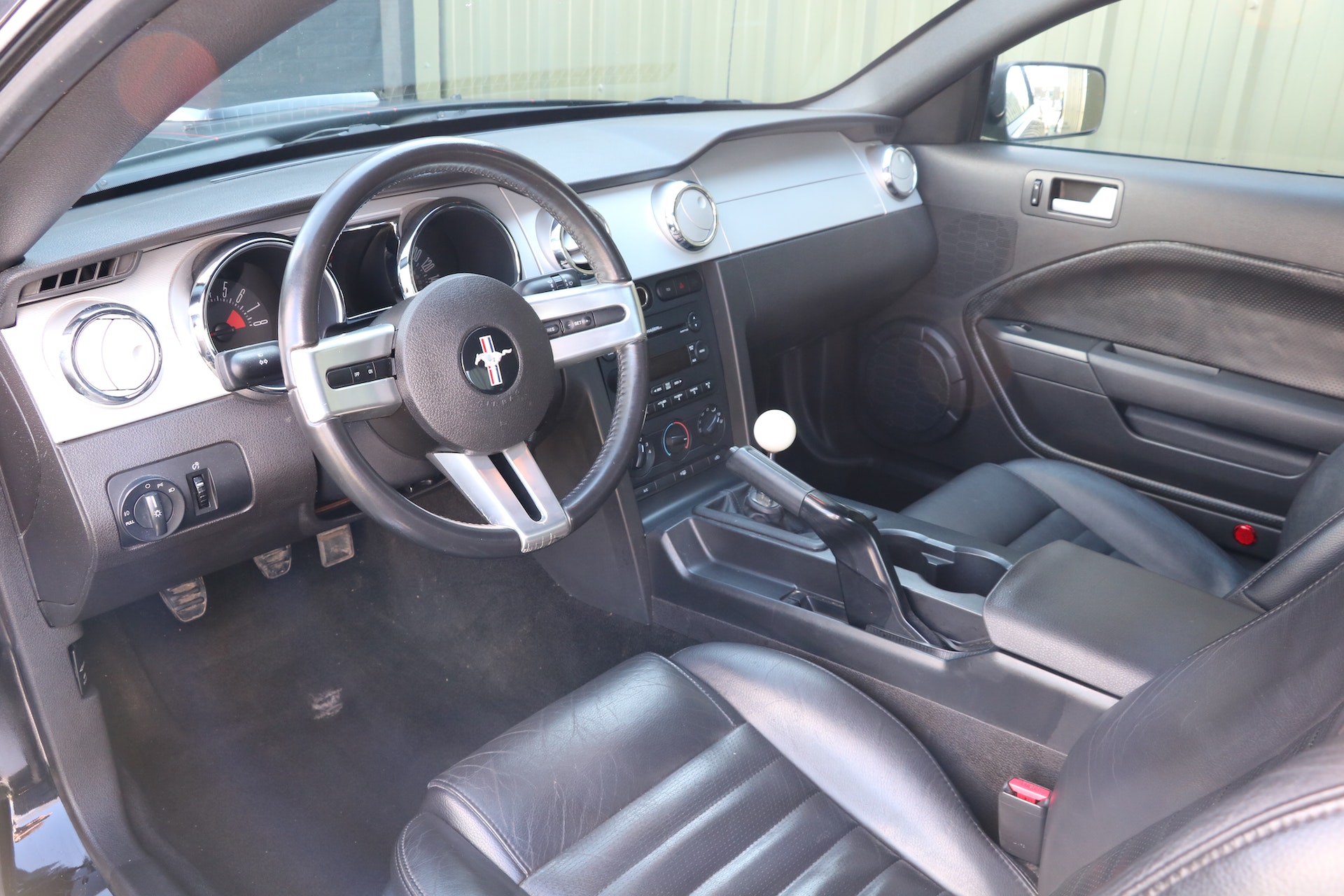 Factory-fitted equipment includes air-conditioning, as well as the Shaker audio system. It also has brushed aluminium dashboard trim, and a Hurst Competition Plus gear lever topped with a gloss white knob. All of the instrument gauges work as they should, though the Traction Control light is currently on, which is commonly associated with a faulty wheel speed sensor. The brake fluid is also in need of a top-up. 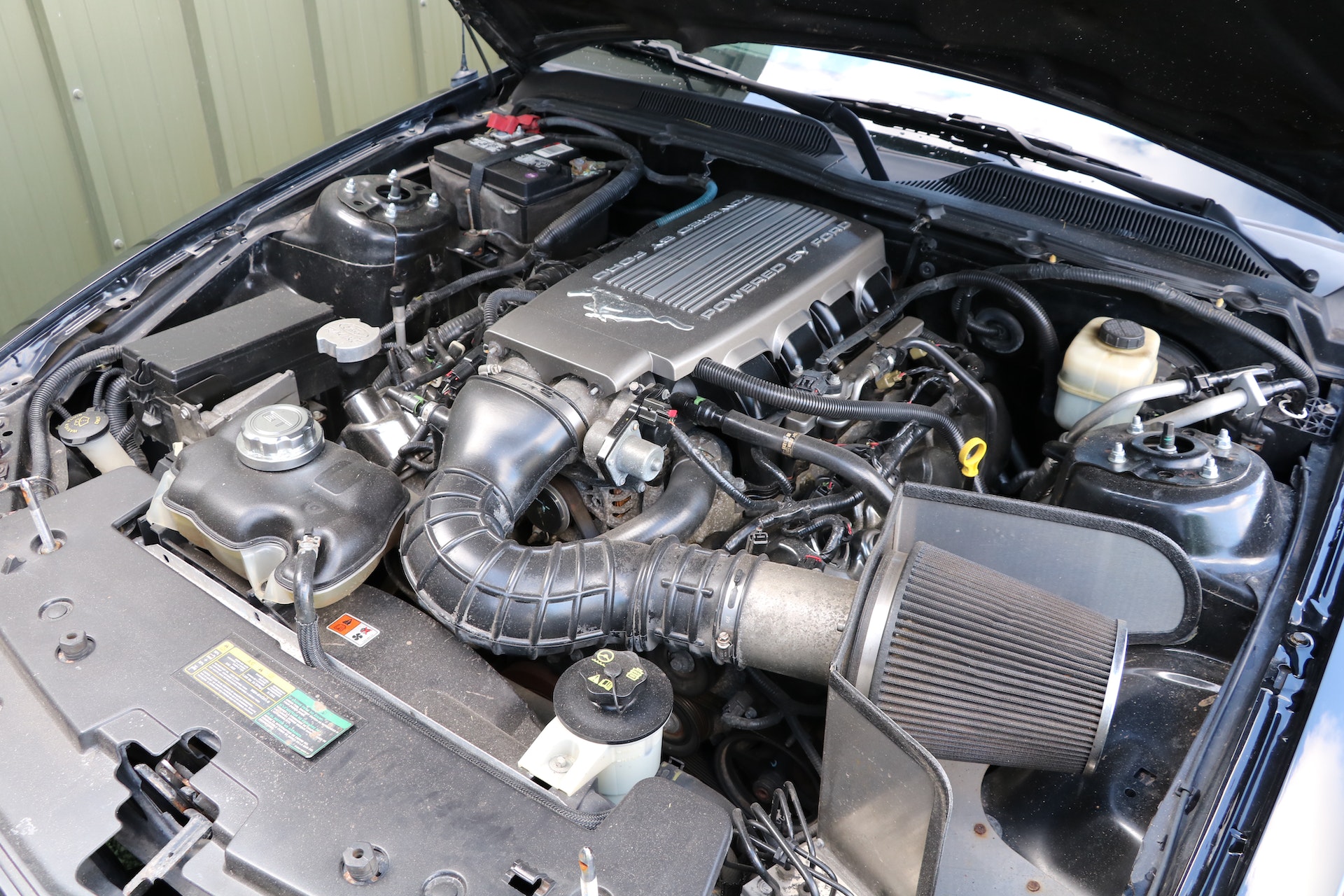 Having been imported to the UK in 2019, this Mustang was put through an MOT test on 4 July at 83,019 miles, which it passed on the first time with no advisories or warnings. The alloy wheels are fitted with a set of BFGoodrich G-Force Super Sport tyres in size 275/40 ZR18, with approximately 3mm of tread remaining. The car is accompanied by a set of books, but there are no stamps in the service record. 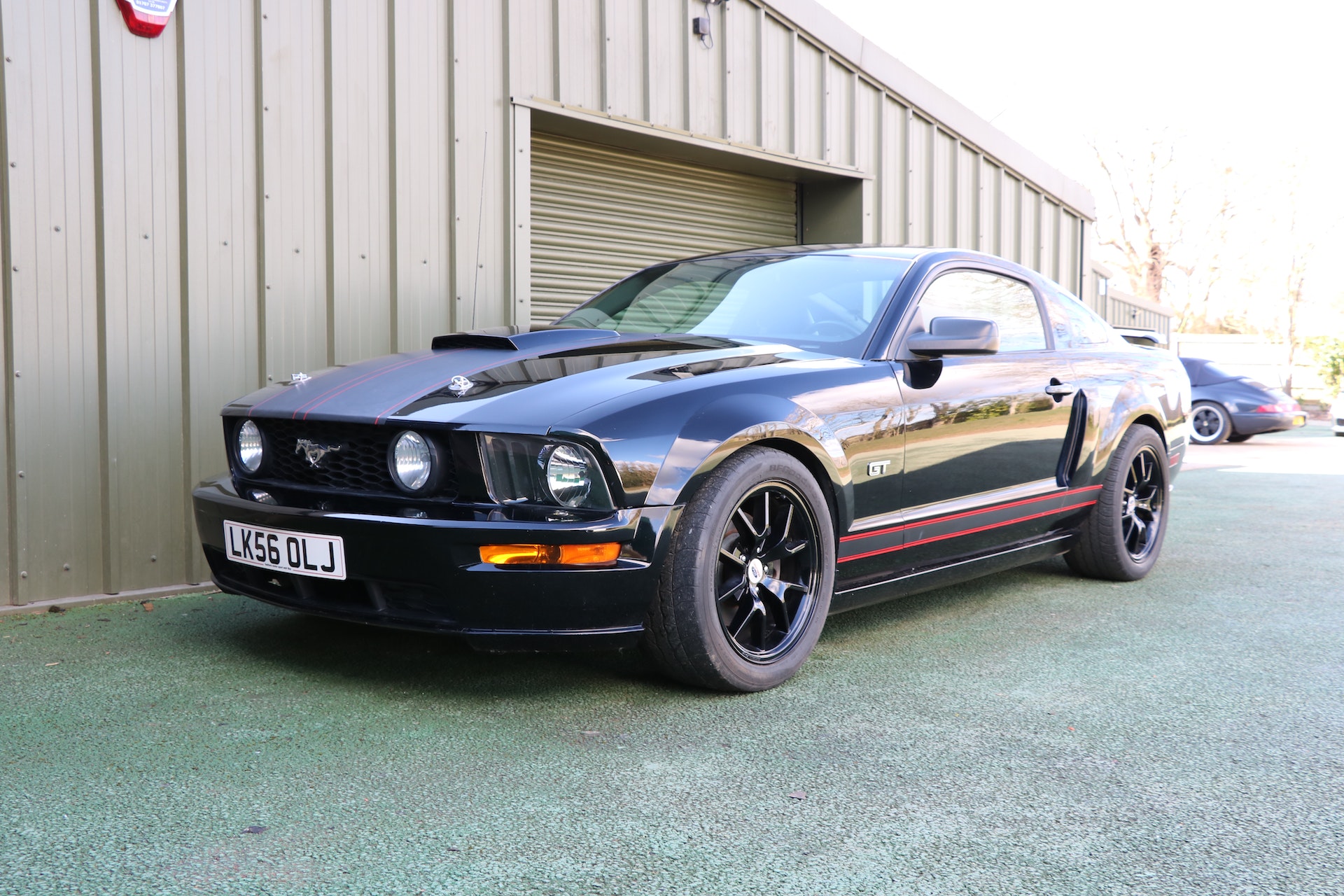 This Ford Mustang GT V8 is a sound example of an instantly recognisable ‘everyman’ muscle car. It benefits from the sought-after combination of a naturally-aspirated V8 engine and manual gearbox, and sounds wonderful both rumbling away at idle and howling at full throttle. While it needs a little cosmetic attention to bring it up to a good standard, this American icon is ready to put a smile on the face of its next owner straight away.