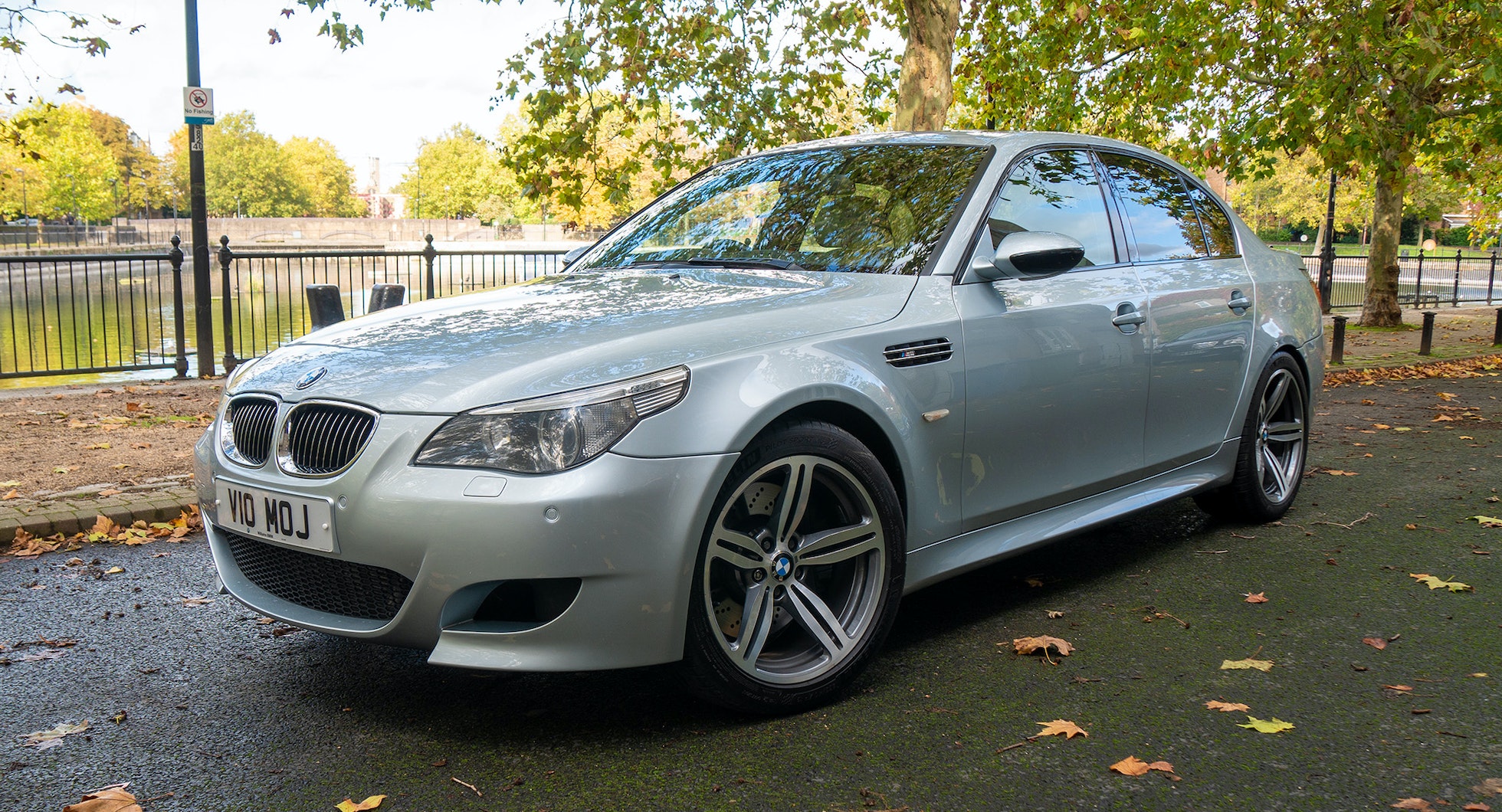 This 2006 BMW M5 is an undisputed modern classic, and arguably the car that ignited the ‘arms race’ of contemporary super saloons. It is powered by the 500bhp 5.0-litre V10 engine, and is driven through the rear wheels via the seven-speed sequential manual gearbox (SMG). The odometer indicates just 64,900 miles from new, which is supported by a detailed history file. 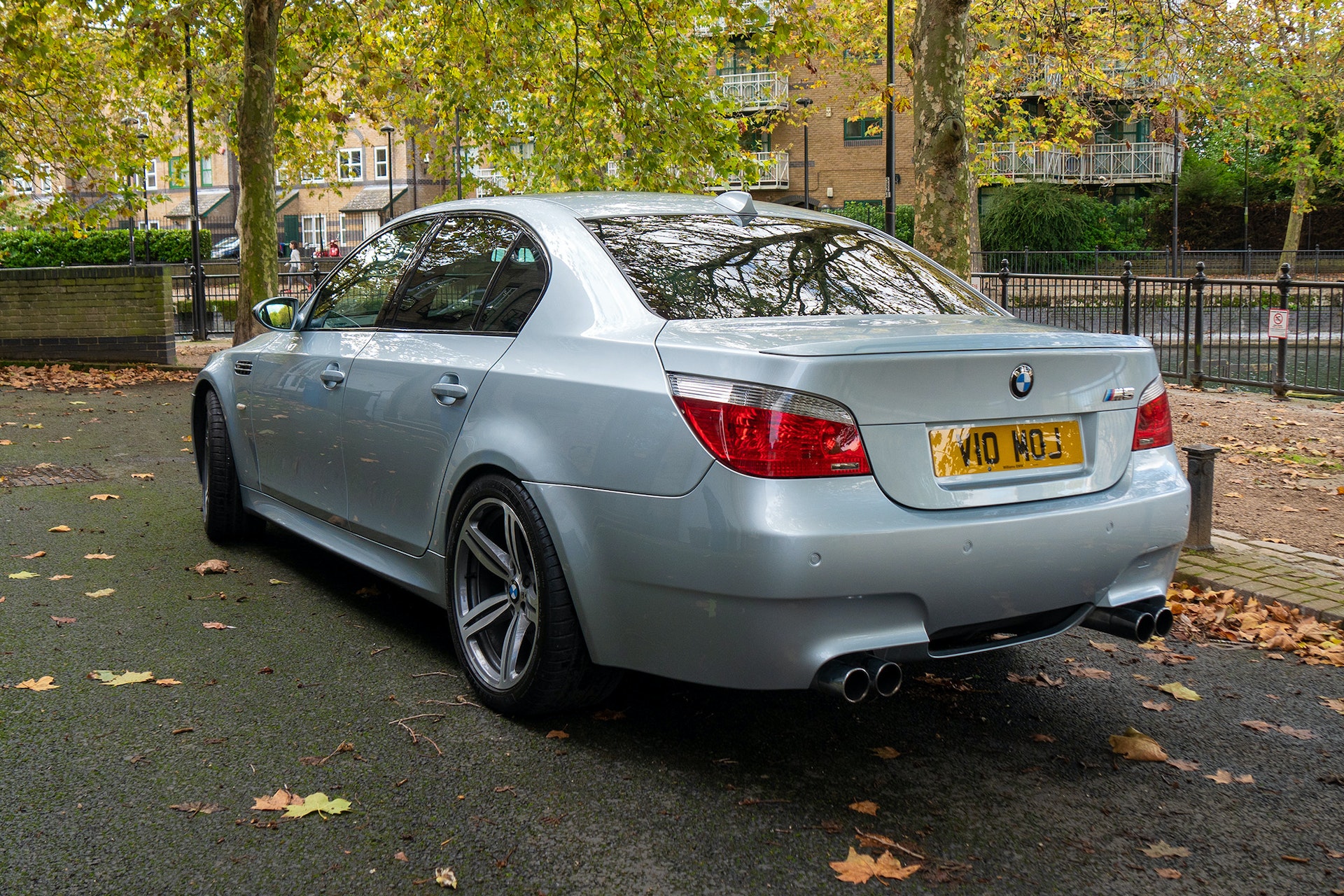 It was ordered new as a dealer demonstrator car, and as such is fitted with almost every option available. The original invoice total stood at more than £90,000 in 2006, or almost 50% more than the car’s basic price. Having purchased it from a private seller in Scotland in January 2013 with around 25,000 miles on the clock, the vendor has enjoyed a further 40,000 miles behind the wheel over nearly seven years of ownership. The car is currently covered by a comprehensive warranty, which is fully transferable to the next owner. 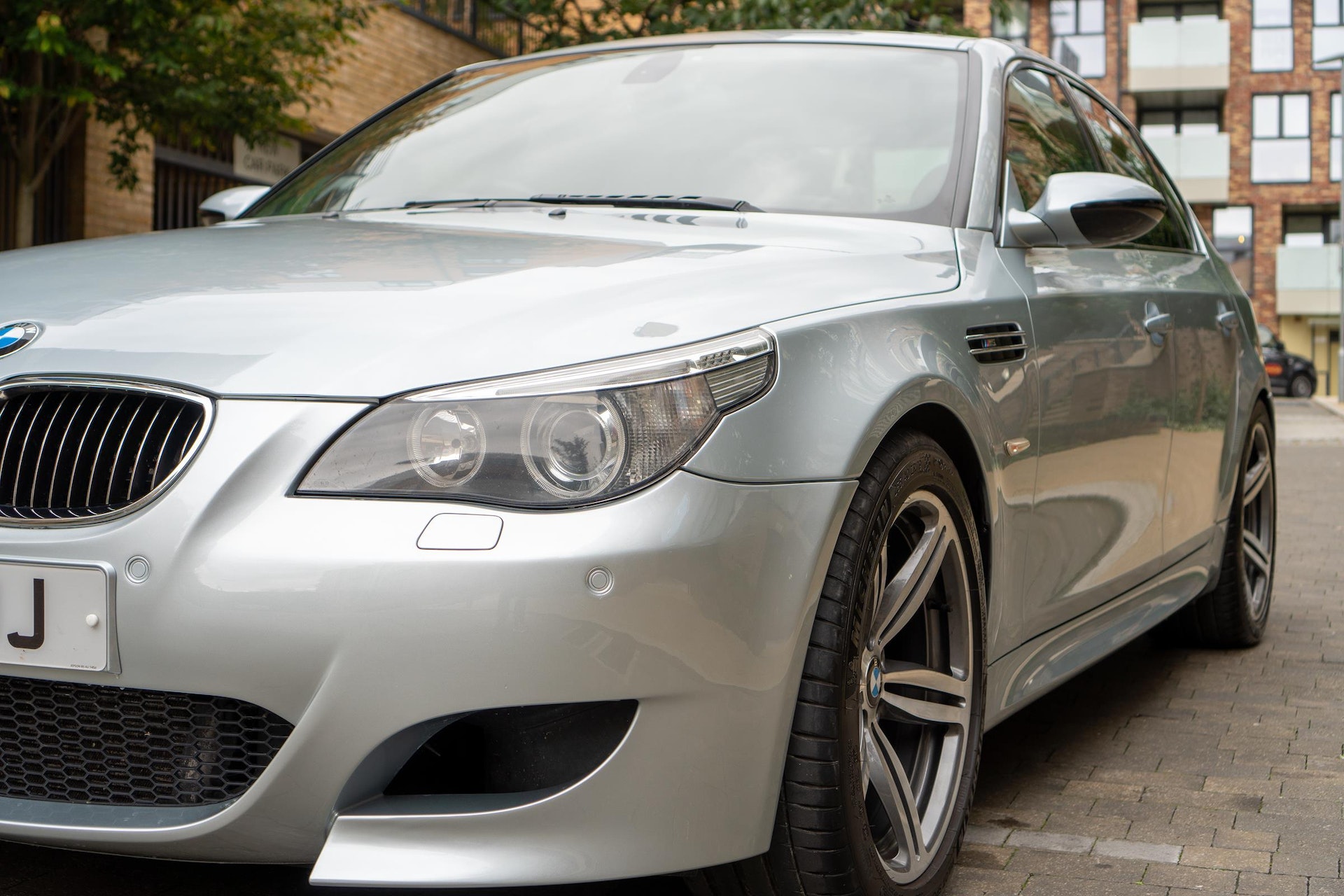 Finished in the beautiful Silverstone Blue II metallic hue, the paintwork is in superb condition all around the car. The detailed photos in the media gallery showcase its impressive appearance. The front end and flanks have recently been refinished to eradicate stone chips, and the rear bumper has been resprayed after it was scuffed by a careless Uber driver. Pre-paint photos are also available should any bidders wish to see them. 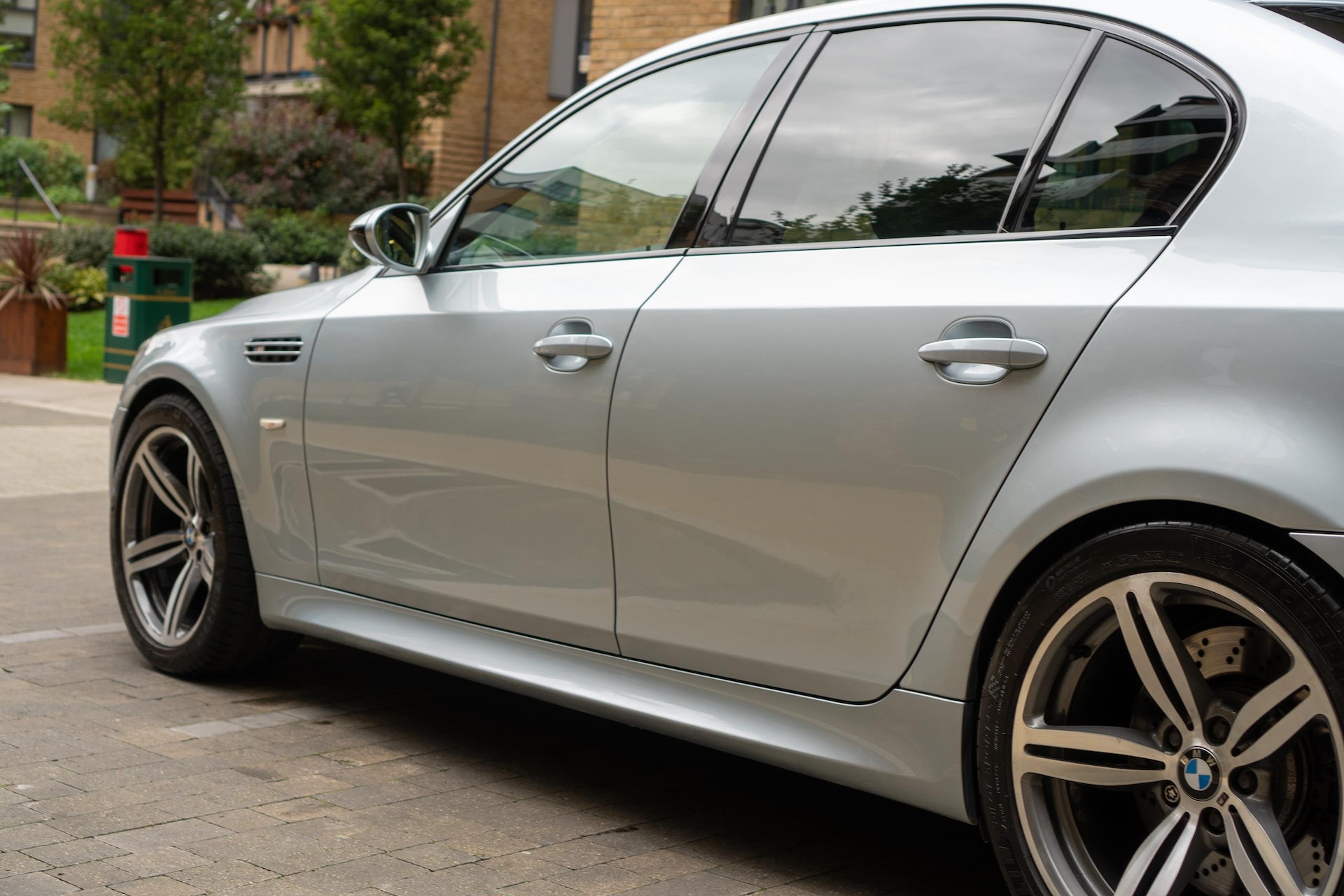 The car sits on the optional 19-inch double-spoke ‘Style 167’ alloy wheels, which have recently been fully refurbished and remain in outstanding condition. It also has the correct and subtle M-specification rear bootlid spoiler, and retains the original exhaust with dual twin tailpipes. 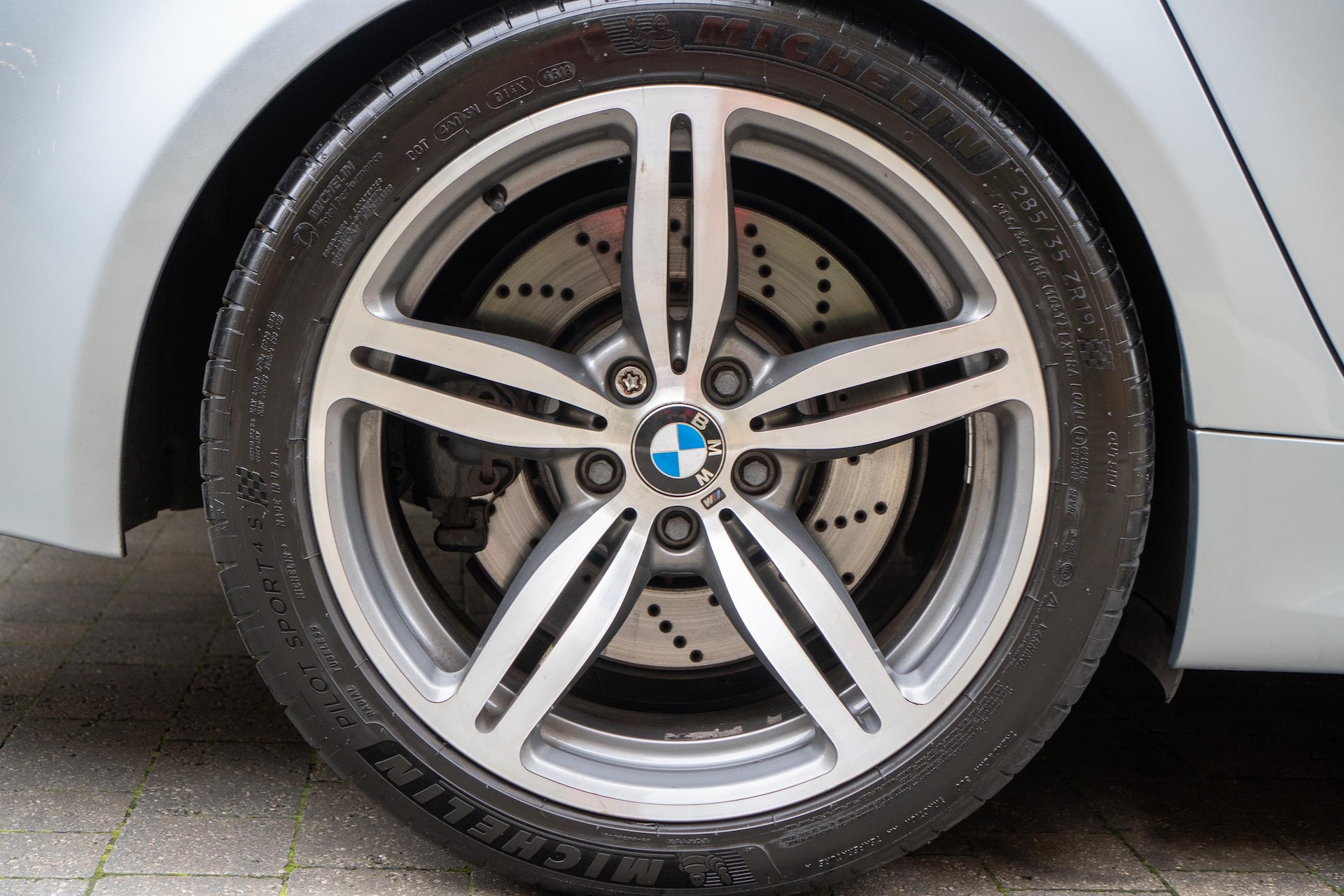 Inside, the cabin is trimmed in Silverstone Nappa leather, including the full extended option with leather on the dashboard and door cards. The headlining and pillars are finished in charcoal Alcantara. Ahead of the driver is the three-spoke M steering wheel with tri-colour stitching, while the dashboard and doors are accented by brushed aluminium trim pieces. 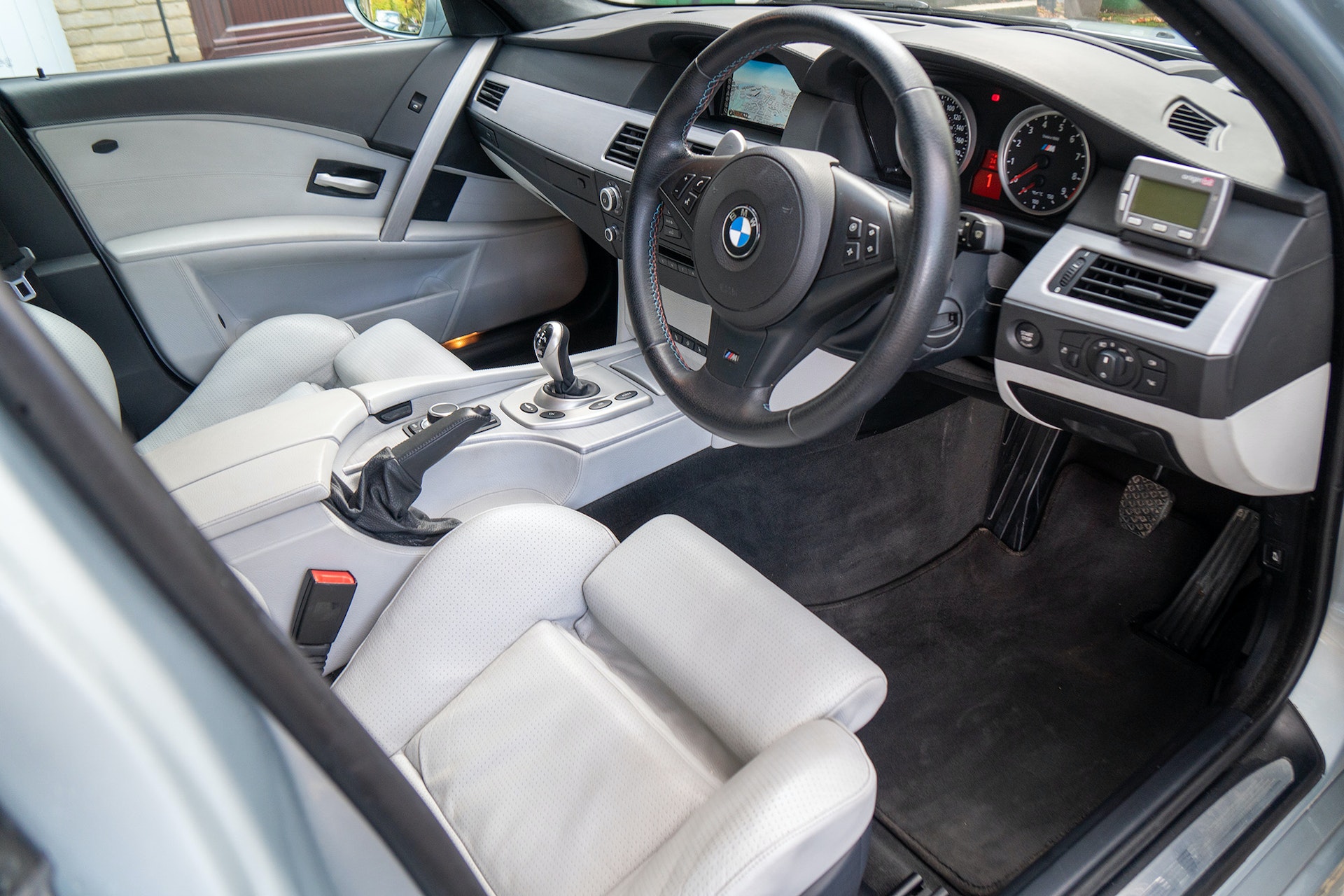 The upholstery is in excellent condition, with the leather evidently having been cleaned and conditioned appropriately to keep it in such great shape. The cabin also benefits from being equipped with the M multi-function seats, which include active backrest width positioning and full electric adjustment, as well as a memory function for the driver. The front seats also feature both three-stage heating and three-stage ventilation. 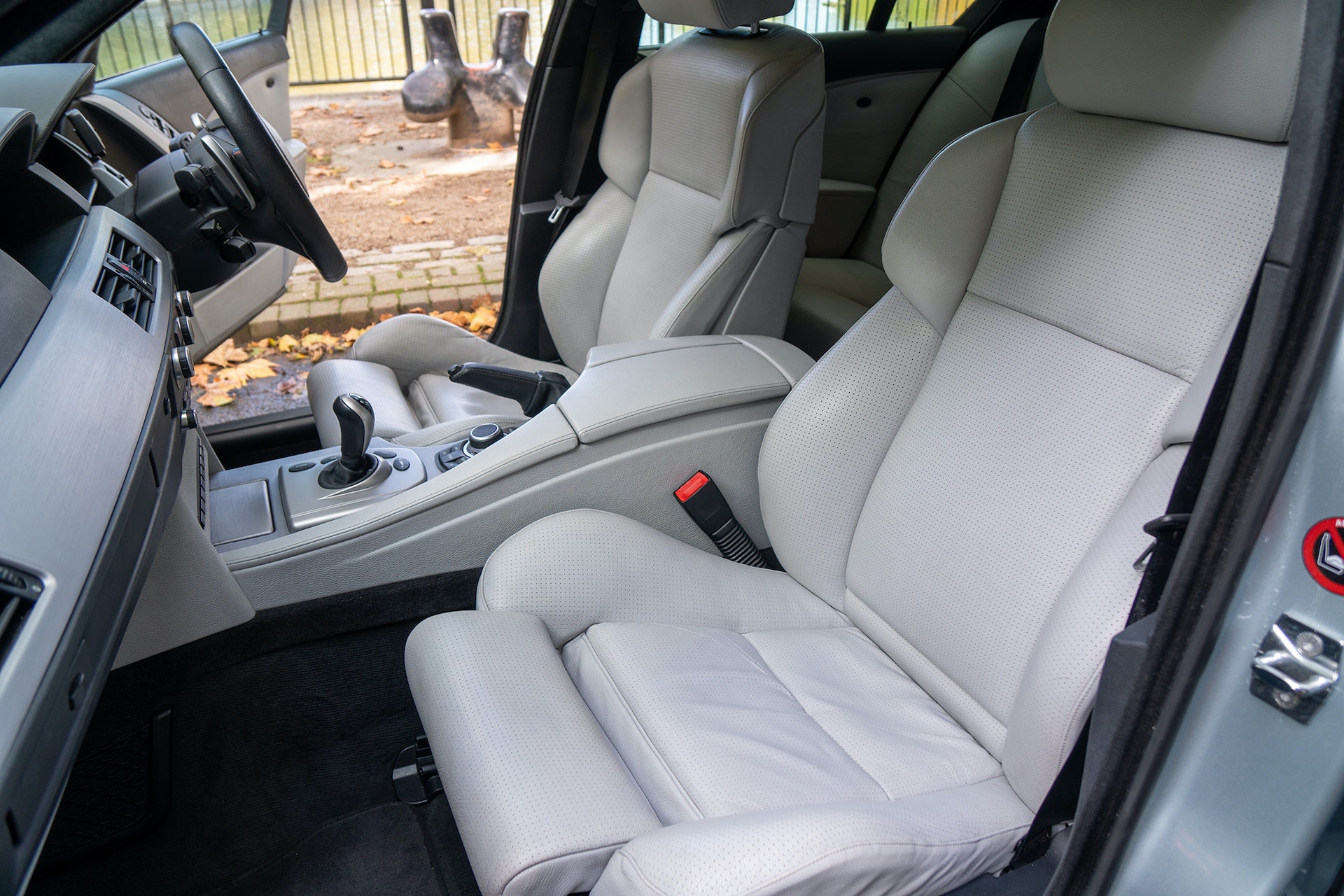 Its impressive specification also includes heated seats and side airbags for passengers in the back, dual-zone climate control, the Comfort Access package with push-button start, and cruise control. It also features adaptive xenon headlights, front and rear parking sensors, and an auto-dimming rear-view mirror. 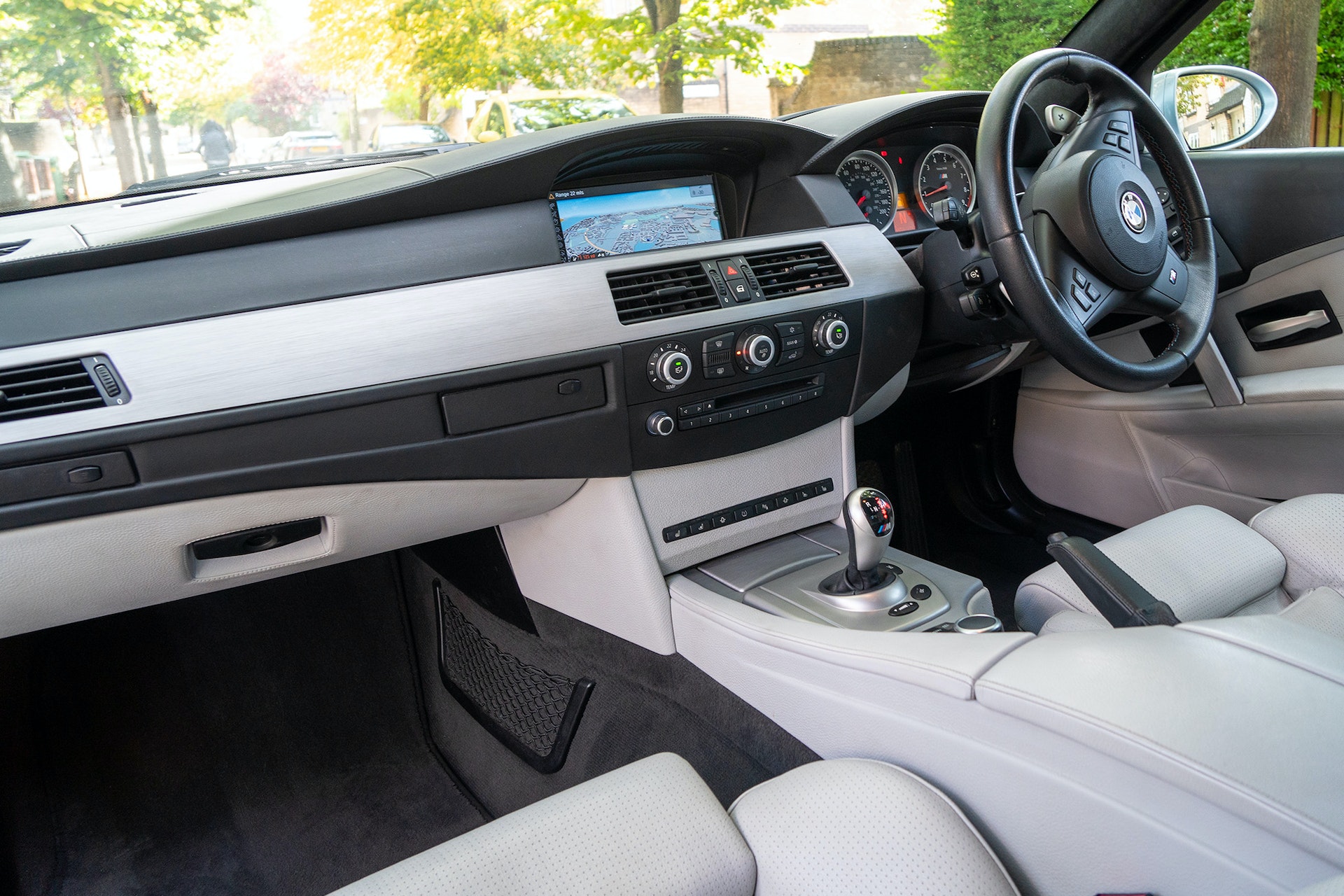 The dashboard incorporates the BMW Professional media system with satellite navigation, along with Logic 7 surround-sound audio with a six-disc CD changer. Above the front seats is an electrically-operated glass sunroof, while the rear window is also equipped with a retractable sun blind. 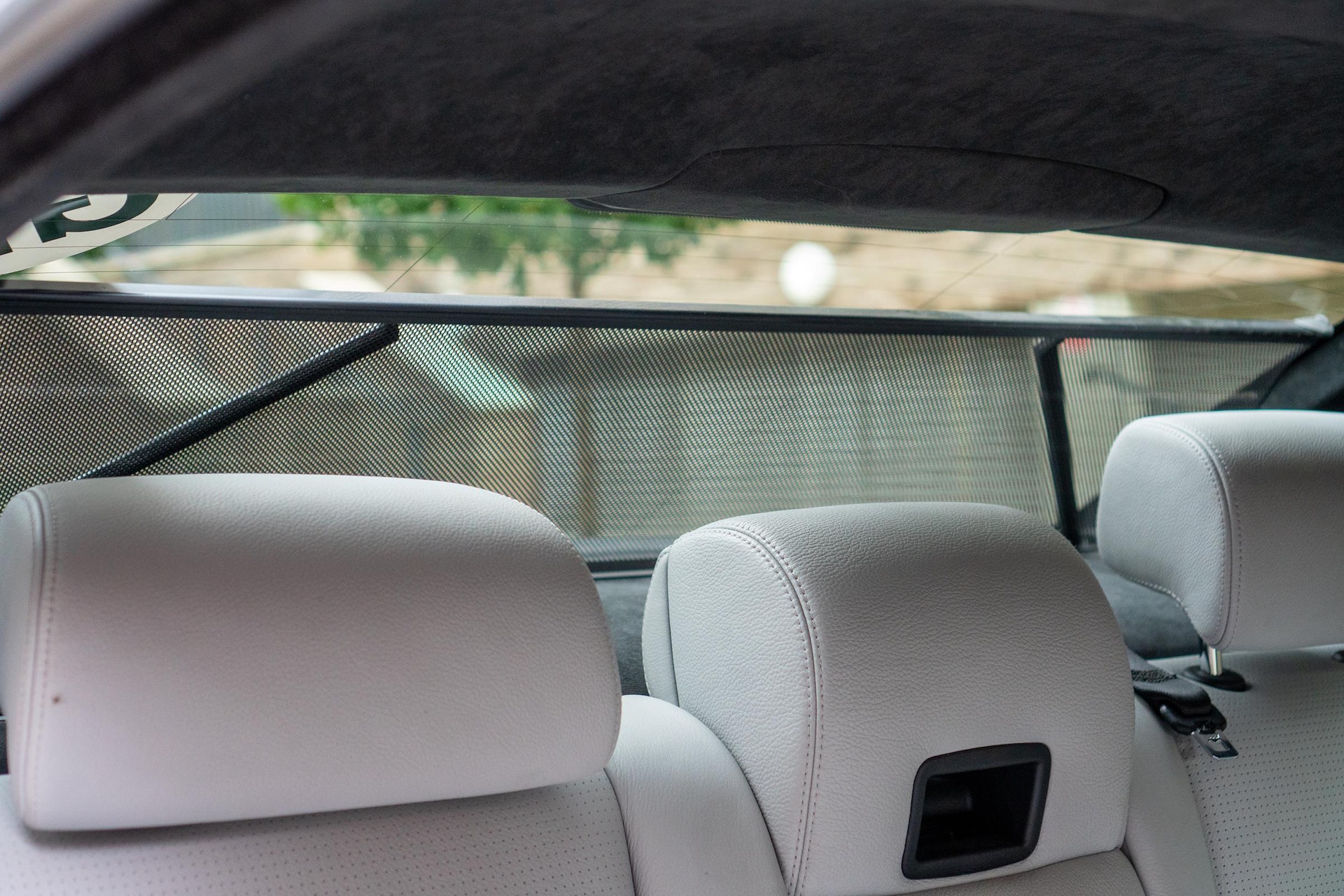 During the vendor’s ownership, the iDrive system has been upgraded to the 2009-onwards CIC system. This includes Bluetooth integration with smartphones, as well as the new map system. It is a significant update over the older CCC DVD system, and has been carried out using genuine parts and is fully coded to the car. 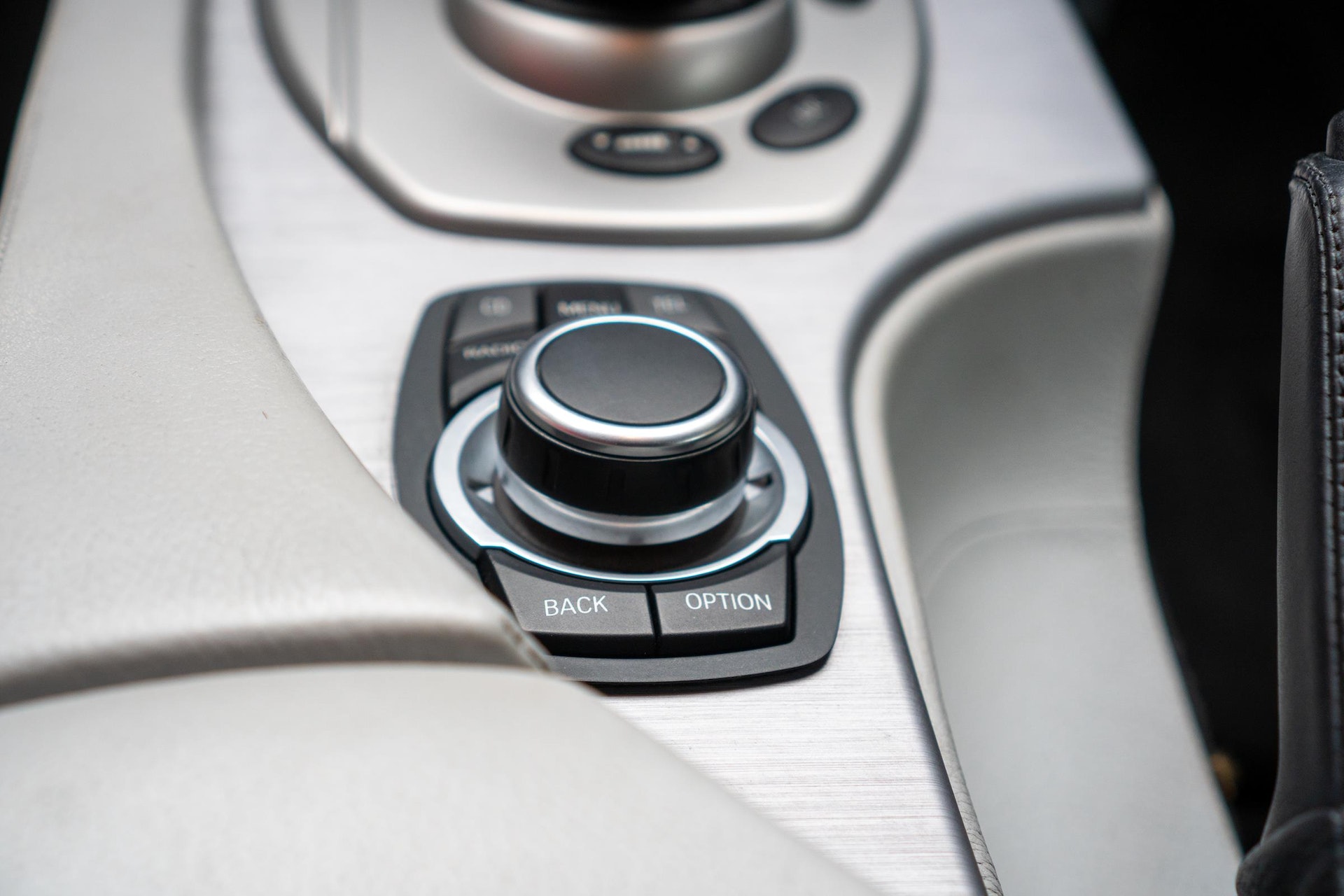 All of the carpeting throughout the cabin is in great shape, and it also has a set of fitted velour overmats. At the rear, the boot lining is also in very good order, and the through-loading system here means that longer items can be transported. The original tool kit is still present within the fold-down storage panel, as well as the warning triangle and first aid kit. The tyre compressor remains stowed under the boot floor. 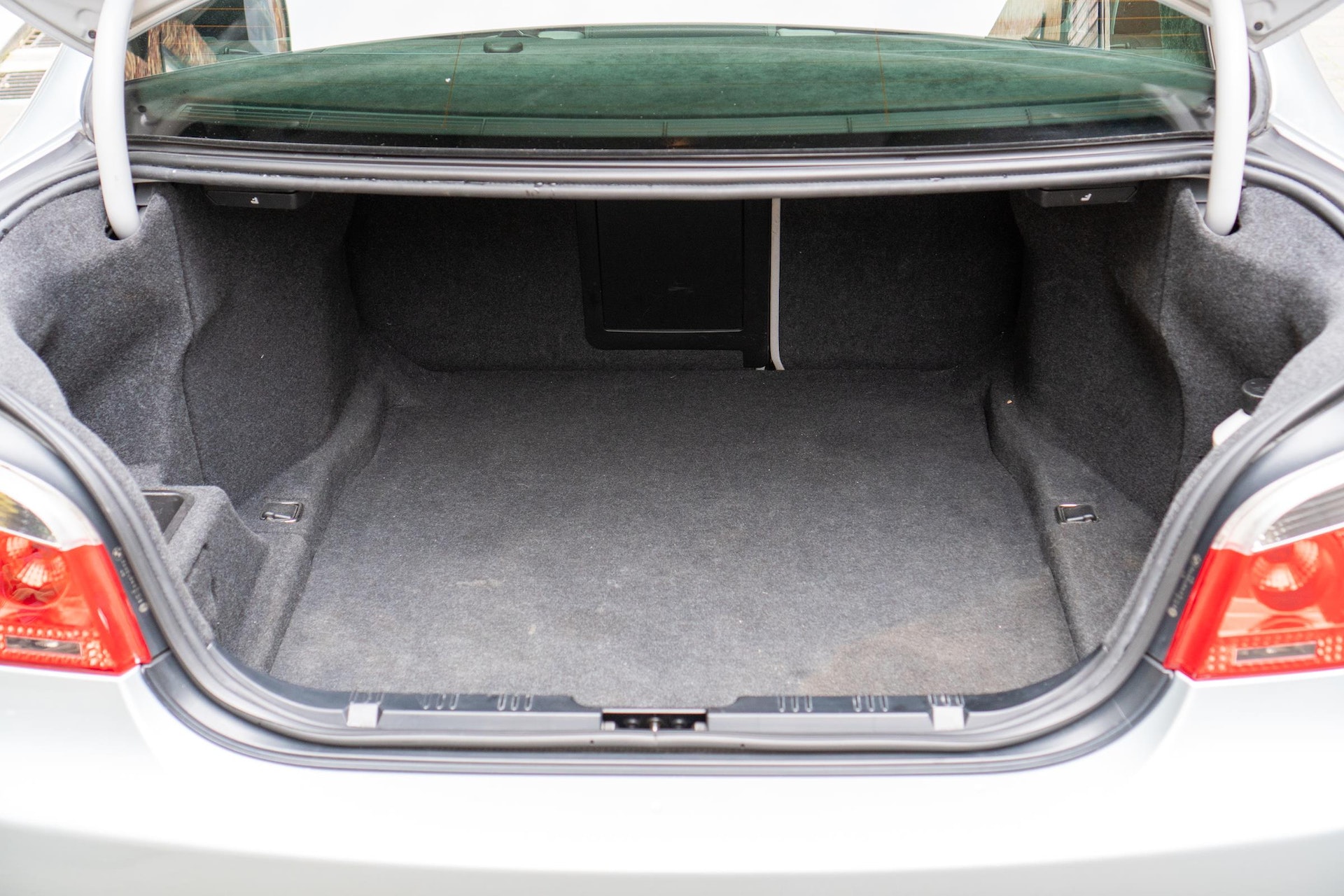 Mechanically, it would be hard to find another E60 M5 in better condition, or with the knowledge that so many big-ticket items have been sorted in recent years. Knowing that some common issues with this era of M5 can prove to be very costly to fix, the vendor wisely chose to put BMW warranty cover on the car as soon as he acquired it in 2013. Within the last three years in particular, he has benefitted from having numerous substantial items replaced - all of which were covered by the guarantee. 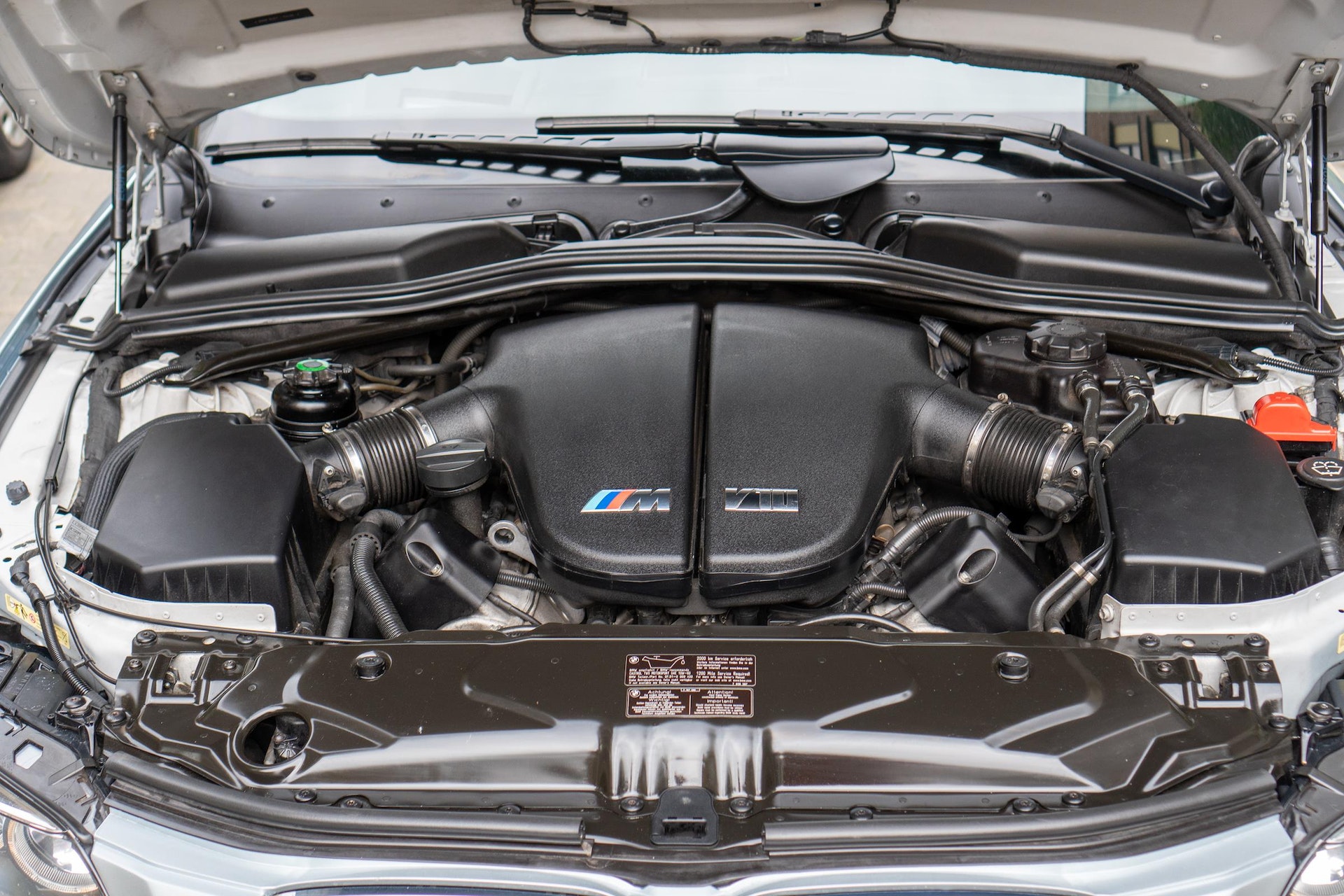 In 2017, the original engine spun a shell and caused damage to the block. Therefore, a complete new V10 engine was sourced and installed. The year before this, a brand-new replacement gearbox was also fitted, along with a new flywheel and clutch, and a new SMG pump. The retail value of all of the parts and labour was around £40,000. 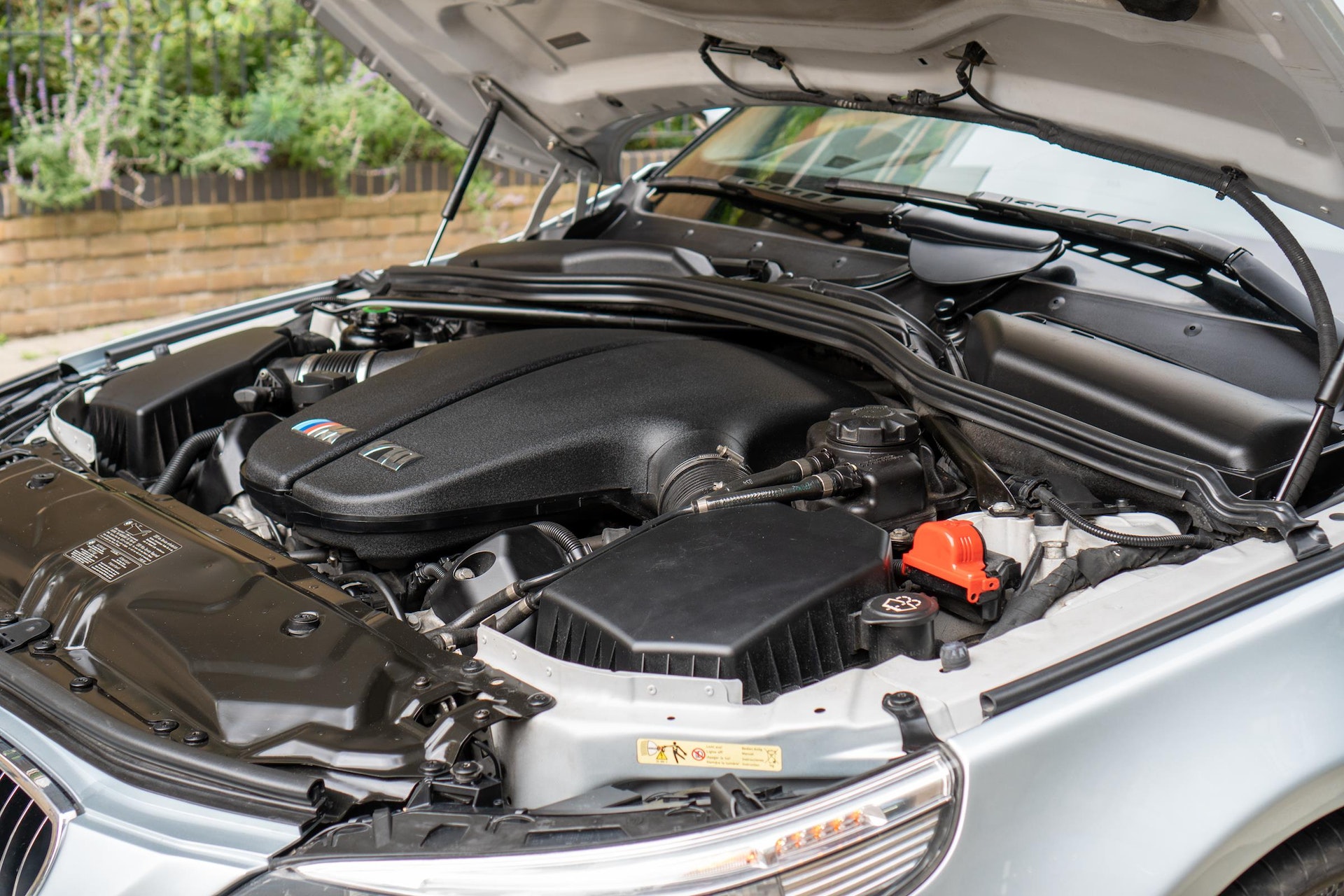 All of the warranty work was completed by BMW main dealers including Park Lane, Sytner and Stephen James. The new engine has covered less than 10,000 miles and has had its important running-in service. The replacement gearbox, clutch and pump have covered around 15,000 miles. Prior warranty work also included a replacement passenger seat sensor in 2014, along with a new upshift paddle. 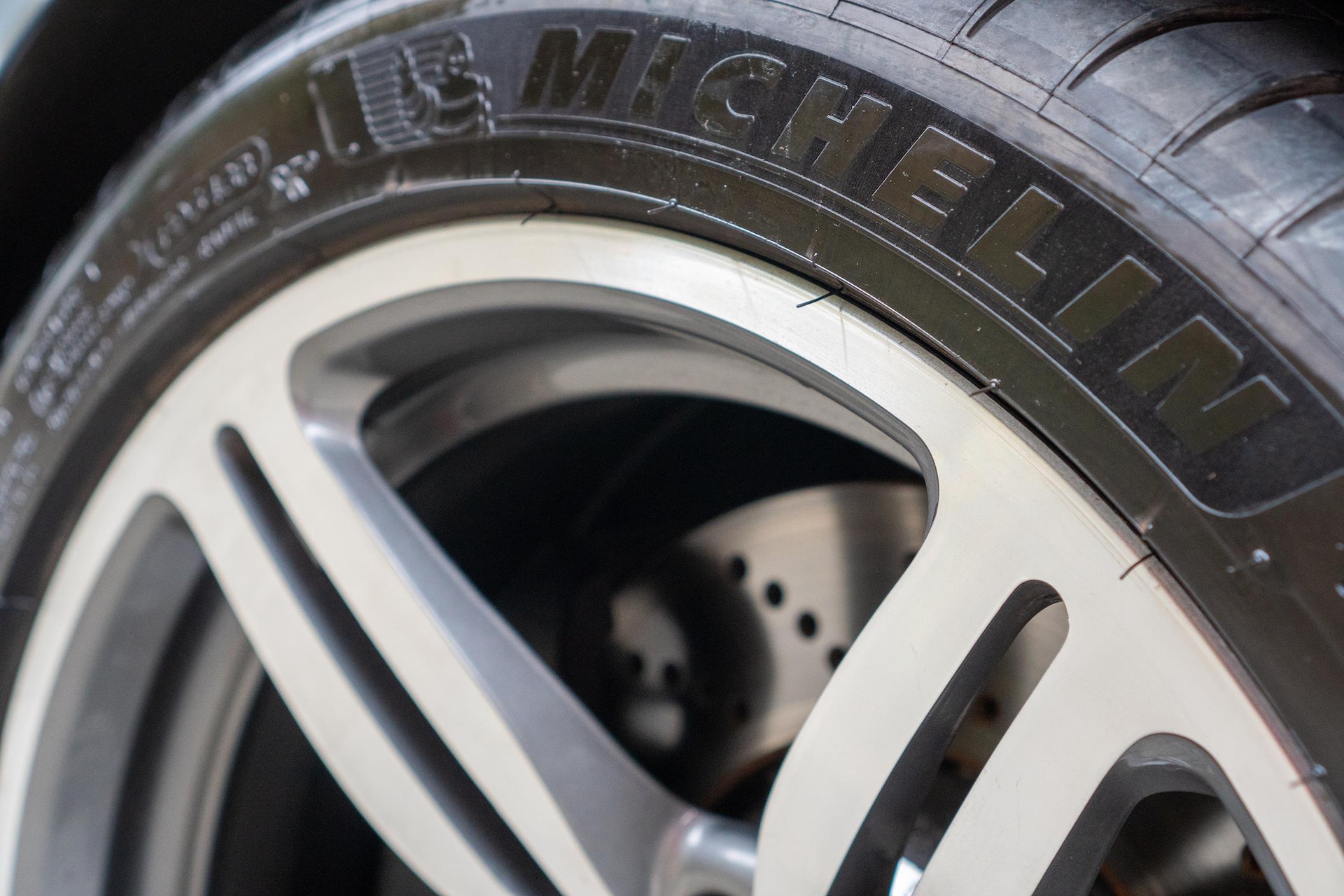 The last scheduled maintenance was carried out on 14 June 2019 at Stephen James BMW in Woolwich, which included renewal of the front brake discs and pads, as well as a brake fluid change and a new micro-filter. Its last oil change service was around 3,500 miles ago on 7 September 2018 at the same main dealer. A full summary of the service history is included below, and shown in the media gallery (please note the services in June 2013 and January 2015 have been dated incorrectly in the stamped record, but these have been confirmed and verified by BMW Park Lane). 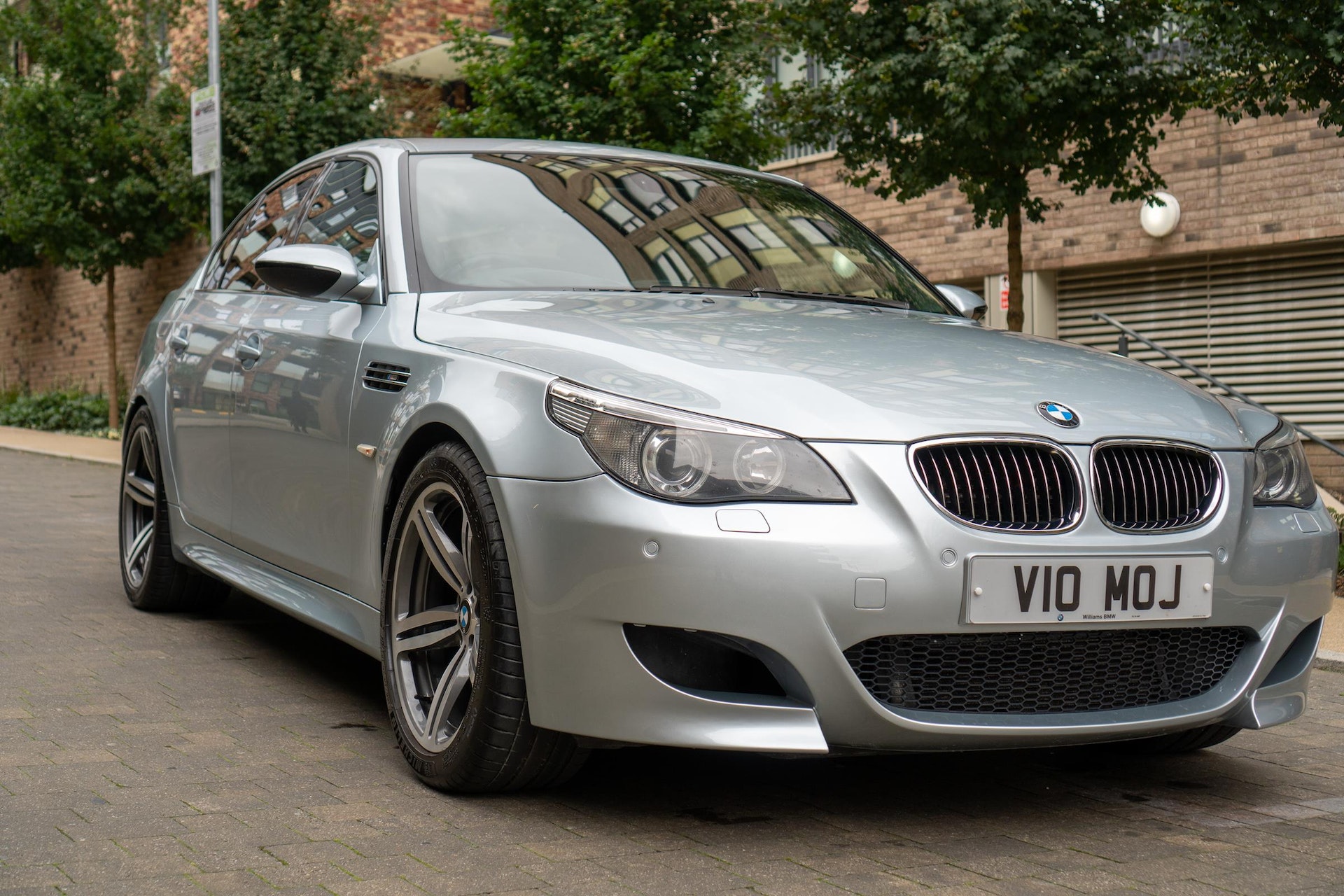 Within the last year, the M5 has also received new front control arms, as well as rear discs and pads. The vendor notes that wheel alignment is carried out at least twice a year to ensure that the car is set up perfectly, and it was last completed by BMW specialist Technosport in North London. 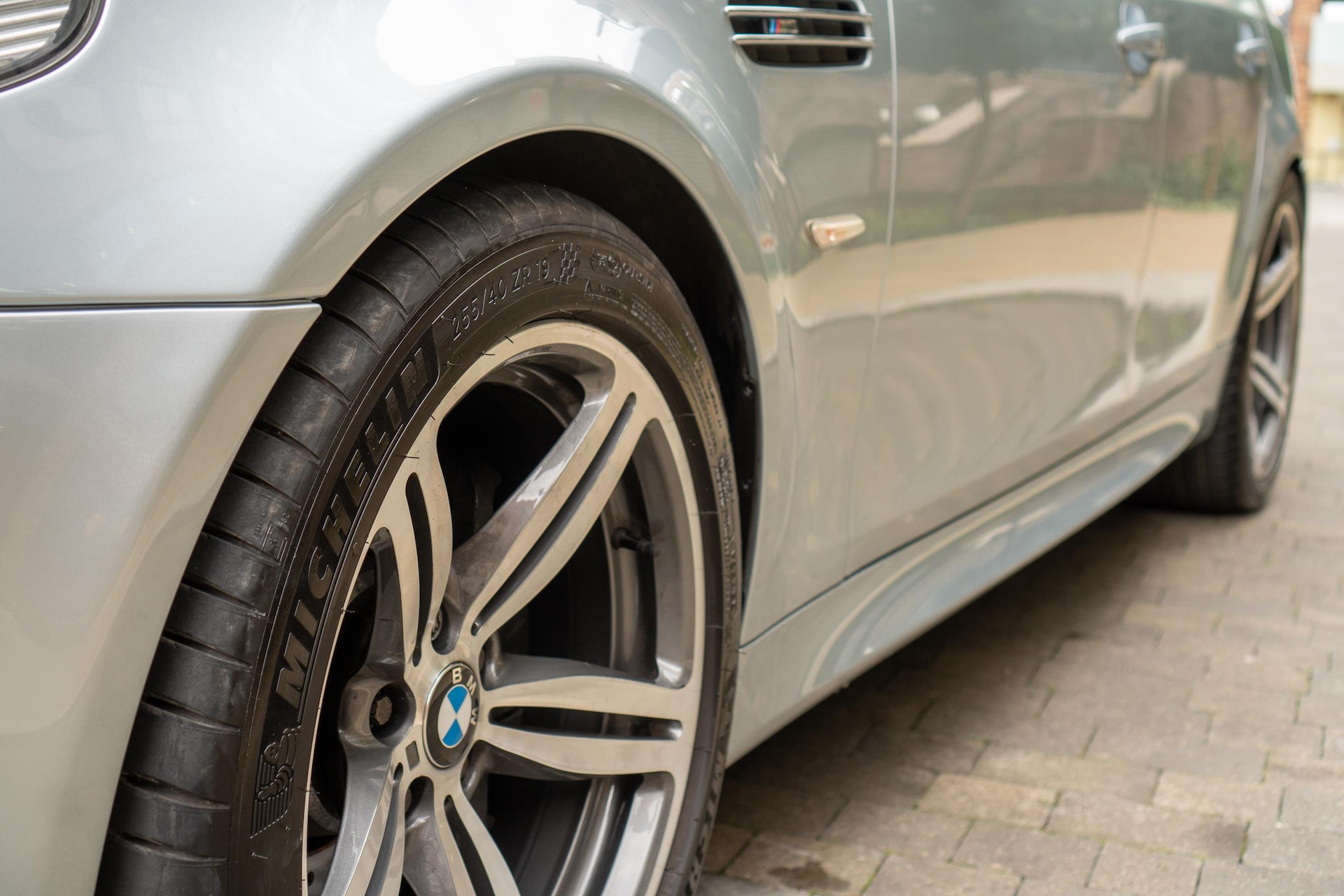 In between using BMW main dealers for required scheduled servicing, the vendor has also used marque specialists to carry out interim oil changes. These have always been done using the BMW-approved Castrol Edge 10w-60 oil for M models, roughly at 5,000-mile/12-month intervals between the main dealer services. 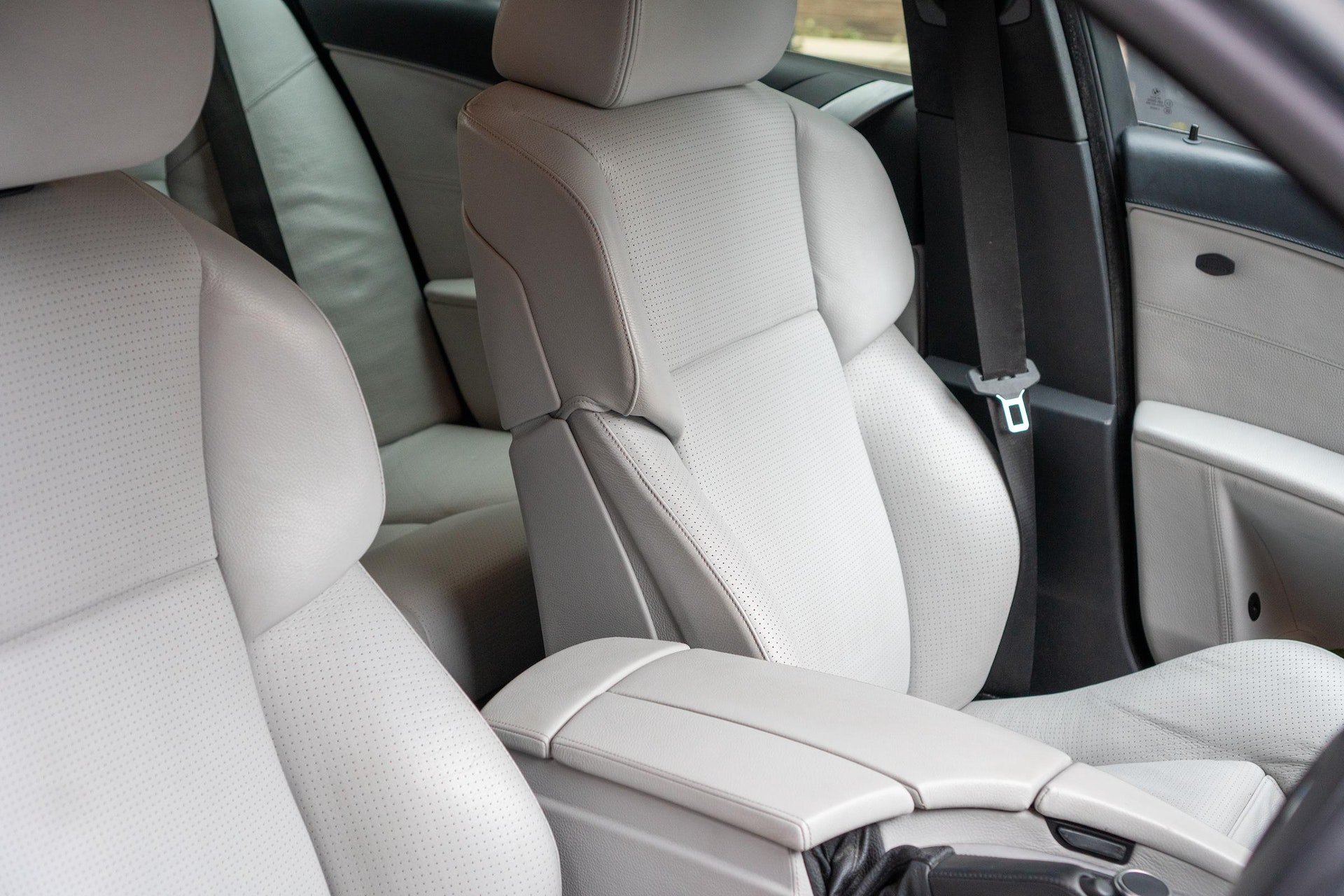 During the vendor’s ownership, the front and rear anti-roll bars have also been replaced. At the front is a genuine E63 M6 bar, which is 5mm thicker than the standard item. At the rear is an adjustable Dinan bar, which is 3mm thicker than standard and has three different settings - currently set to the softest of the three. The vendor notes that they bring significantly better control to the driving experience at all speeds. Finally, wheel spacers have also been fitted on all four corners, with the correct longer wheel nuts in use, which were supplied by specialist Evolve Automotive. 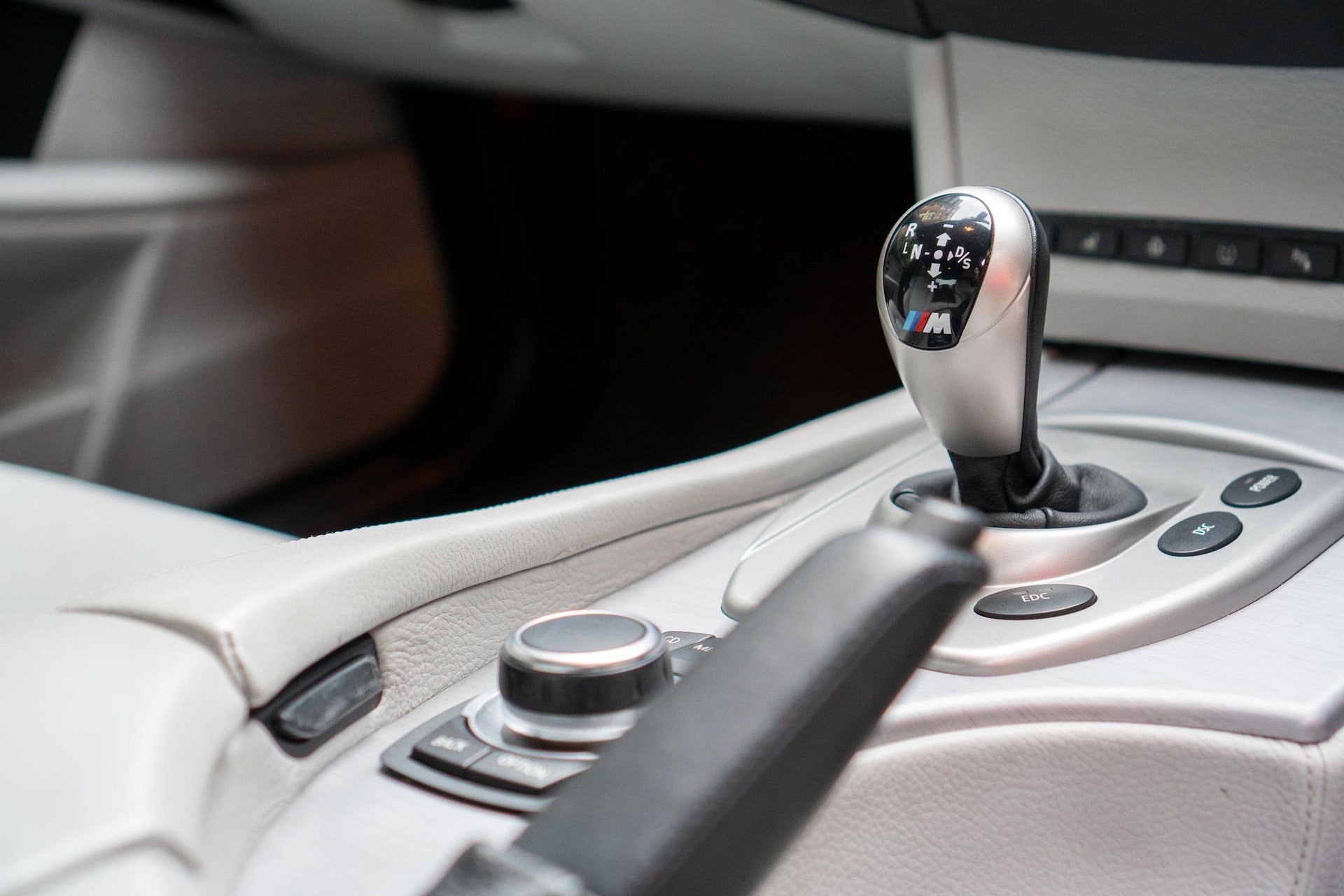 Its most recent MOT test was carried out on 7 October 2019, at 64,673 miles, which resulted in a clean pass with no advisories. In fact, during the last four years covering nearly 20,000 miles on the road, it has always passed the annual MOT test first time and with no warnings or alerts. The recently-refurbished diamond-cut alloys are wearing a brand-new set of Michelin Pilot Sport 4S tyres (date-coded to 2019), in size 255/40 ZR19 at the front and 285/35 ZR19 at the rear. 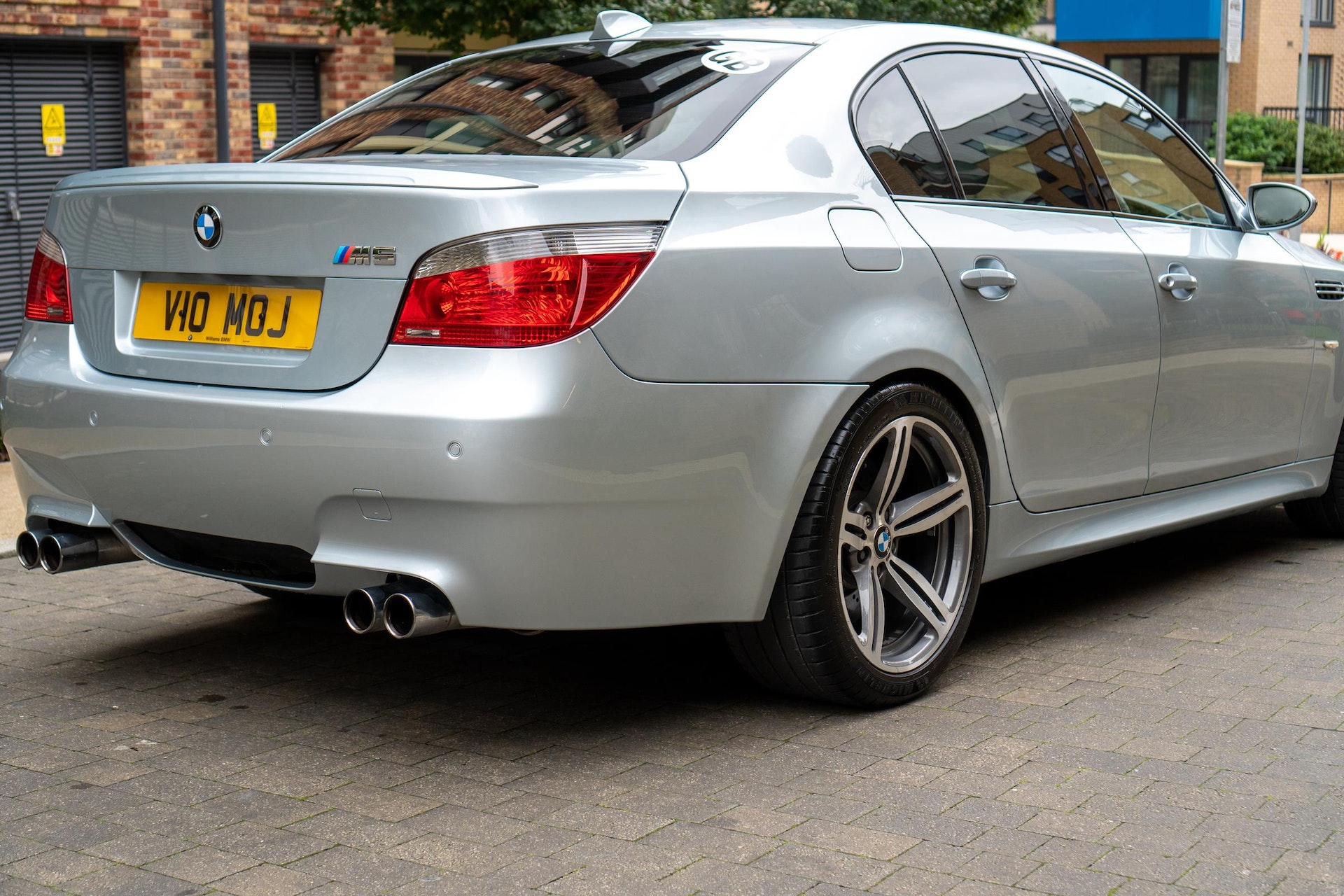 Accompanying the car is the complete book wallet, including the driver’s manual, stamped maintenance record and all of the other user guides and sales literature. A large folder of receipts is also present, covering everything carried out during the vendor’s ownership as well as some from previous keepers. In 2017, a new Tracker security system was fitted, which is fully paid up until 2020. 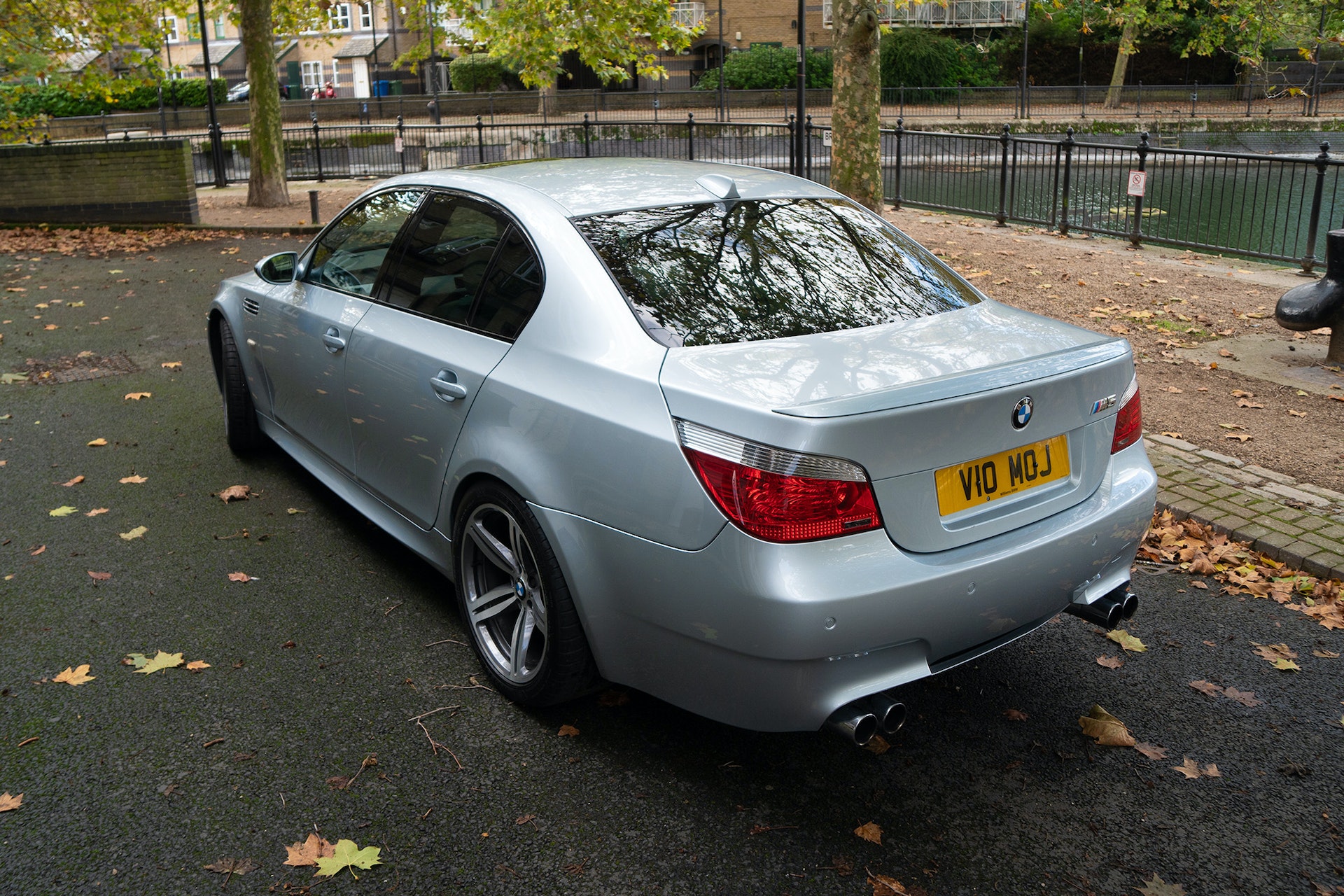 While this era of BMW M5 is rightly regarded as a tremendous performance car, they can also suffer from significant and costly mechanical issues. With this car, there are no surprises - in the vendor’s own words: “everything that often goes wrong on an E60 M5 already has”. In this respect, the warranty cover has been a boon, being used for the replacement of major items to ensure the car presents in outstanding mechanical condition today. 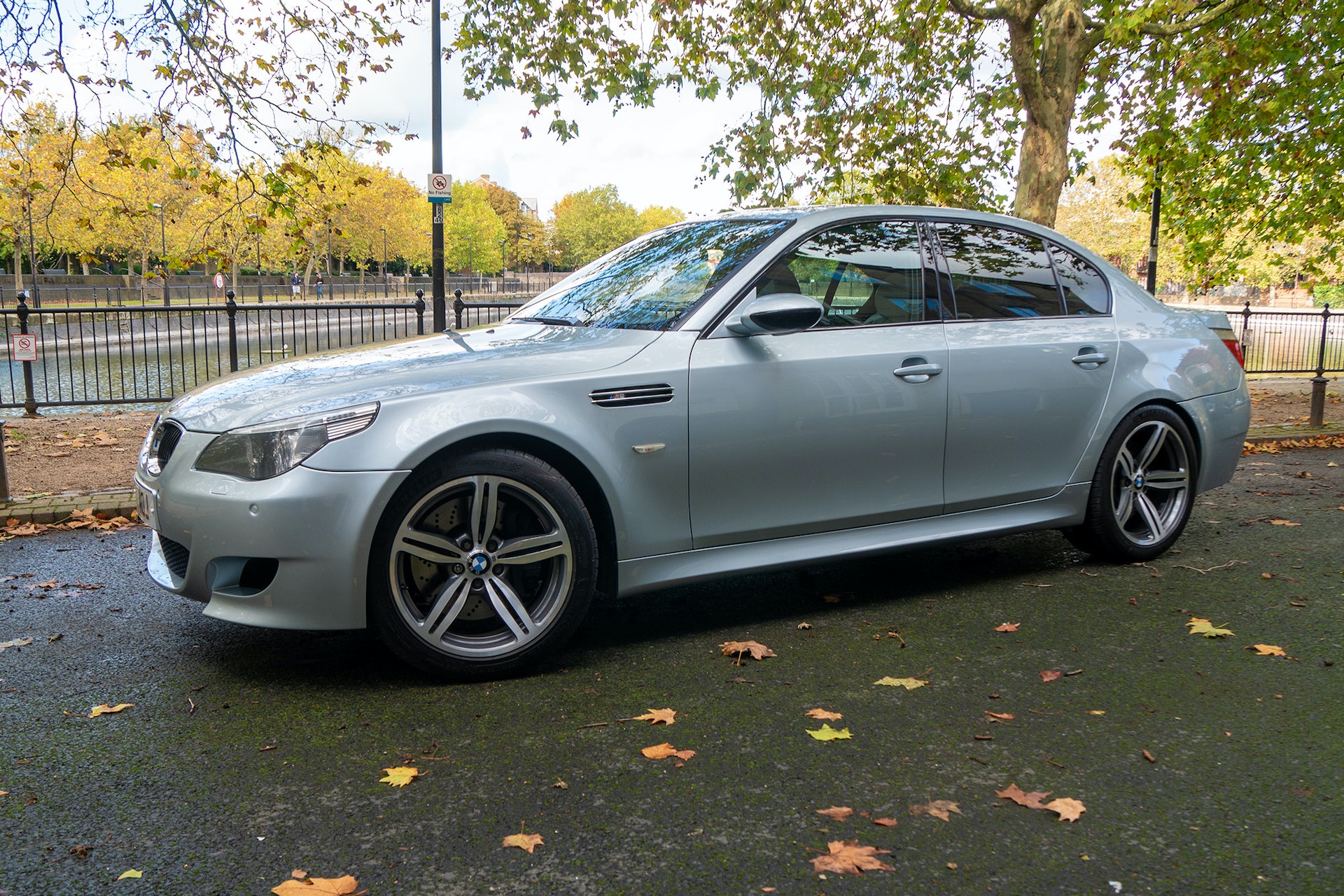 This BMW M5 is also in superb cosmetic order, with recent professional refinishing to make sure that its appearance is as impressive as the driving experience. It has wanted for nothing during the vendor’s ownership, and has always been well maintained to keep it in top form. Its extensive factory specification also means that it stands out among less well-optioned E60 M5s, and this terrific M car is now ready to be thoroughly enjoyed by a new owner.