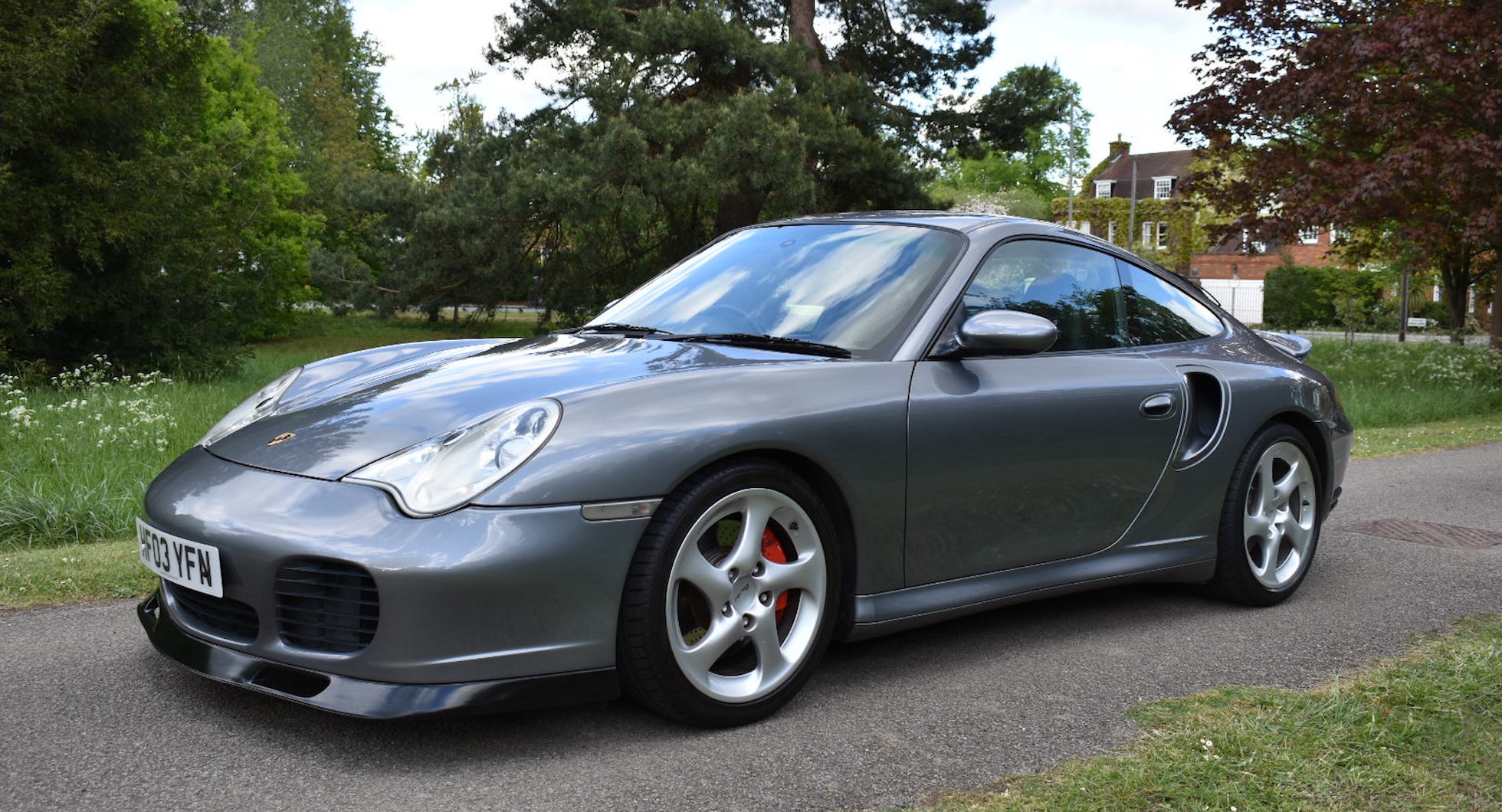 This 2003 Porsche 911 (996) Turbo is a sought-after contemporary performance car, boasting a rare factory colour scheme and presented in excellent condition. It is powered by the 414bhp 3.6-litre twin-turbocharged flat-six ‘Mezger’ engine, with four-wheel drive via the six-speed manual transmission. The odometer shows 91,539 miles from new. 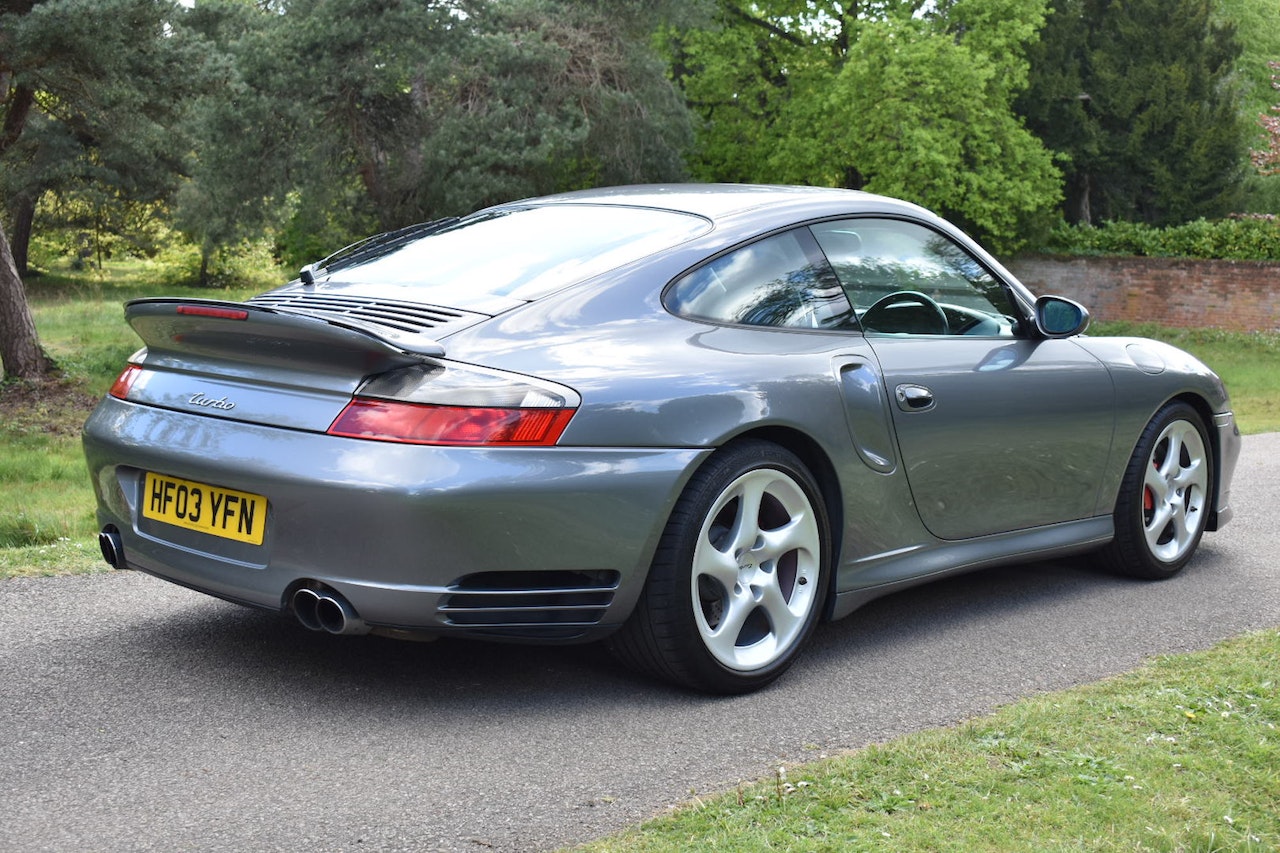 An original right-hand drive UK-supplied car, this 996 Turbo was delivered by Chapelgate Porsche in Dorset, and was first registered in March 2003. There are five previous registered keepers on the log book, and it has been with the current owner for nearly 18 months. 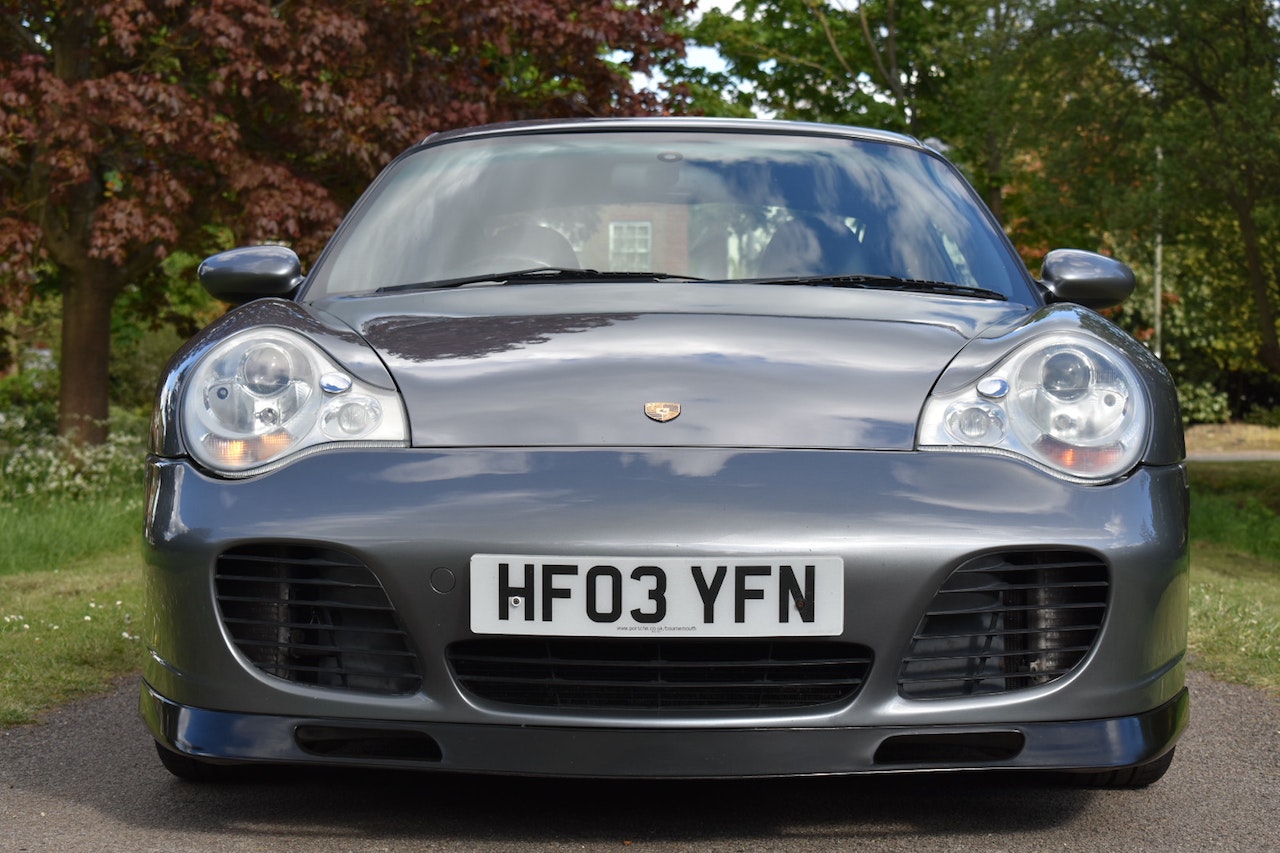 The bodywork and paint is described as being in very good condition overall. Imperfections noted by the seller include a hairline stress crack in the paint just above the front number plate, and a small soft dent above the nearside rear wheel arch. There is a crack in the nearside tail light casing, but otherwise the light lenses appear to be in great shape. 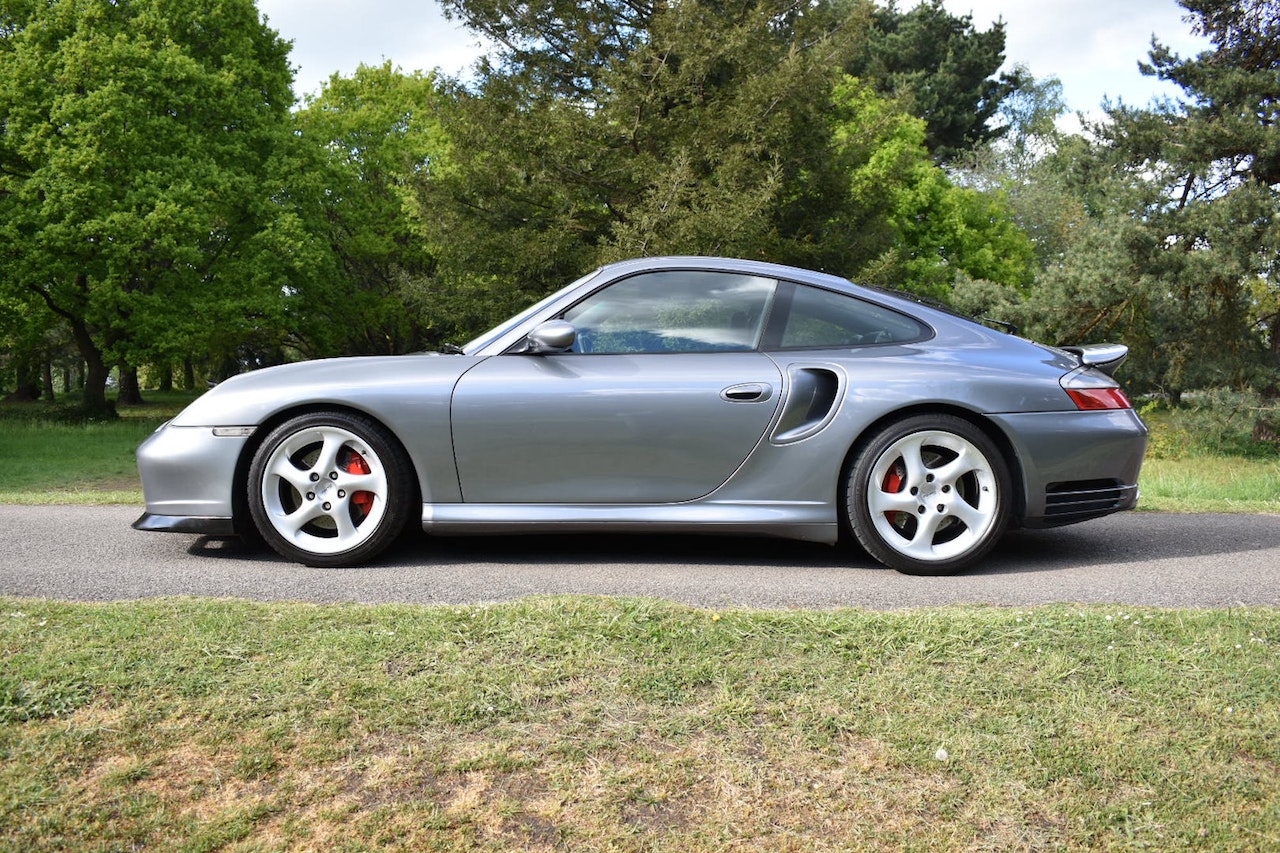 Window and door rubbers are in good order, and the plastic body trims are sound. The car has been retro-fitted with the Porsche sports exhaust at some point, to enhance the sound of the twin-turbocharged engine. It rides on the original and correct set of 18-inch alloys, which have no kerbing marks, though there is some lacquer damage on the nearside rear wheel. 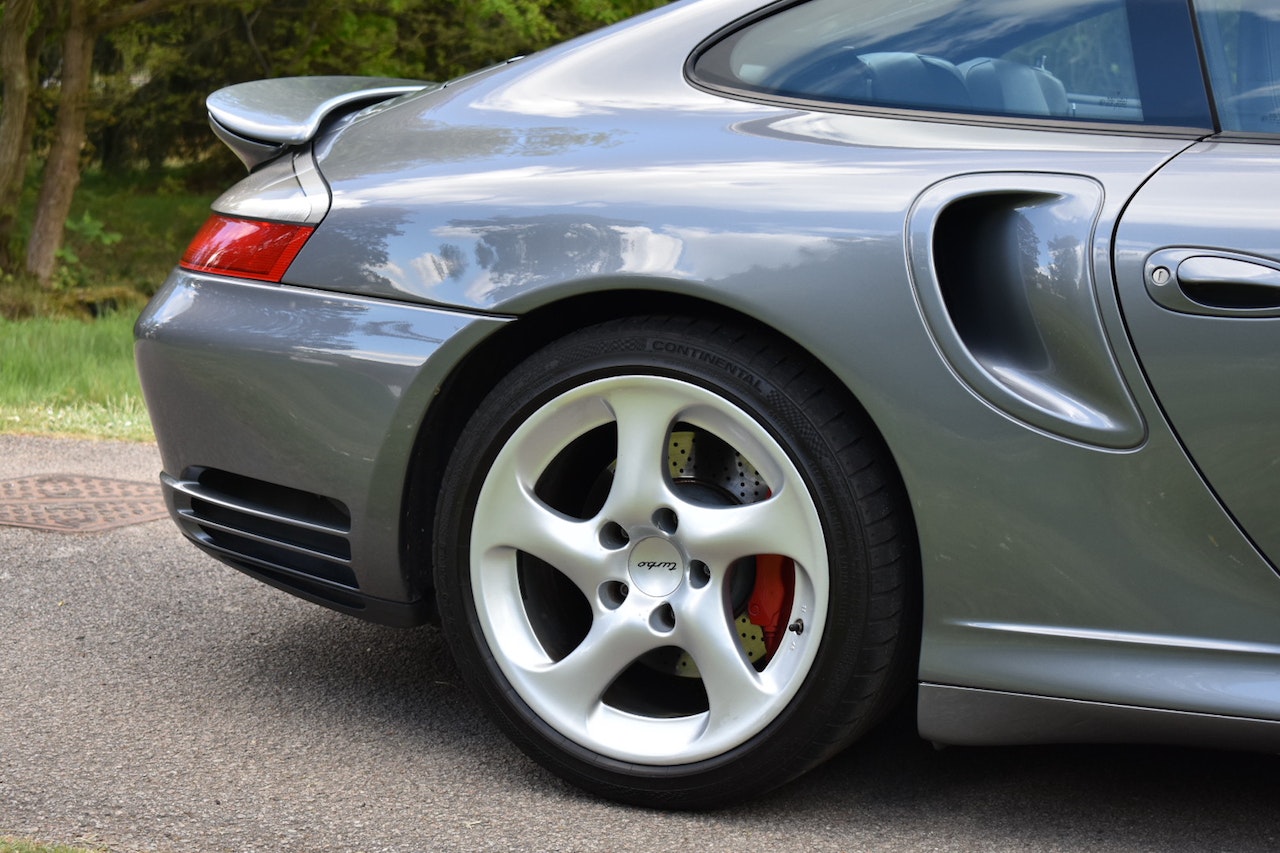 In the cabin, the full black leather trim extends to the door caps and dashboard top panel. Its electrically adjustable front seats have memory settings for the driver’s side, and the leather upholstery presents very well, with only modest wear. There are a few scuffs in the leather on the back of the front seats, and on the handbrake lever. The black carpets are in good order throughout, though there is a worn section on the driver’s side floor mat. The seller also reports a small scratch on the dashboard. 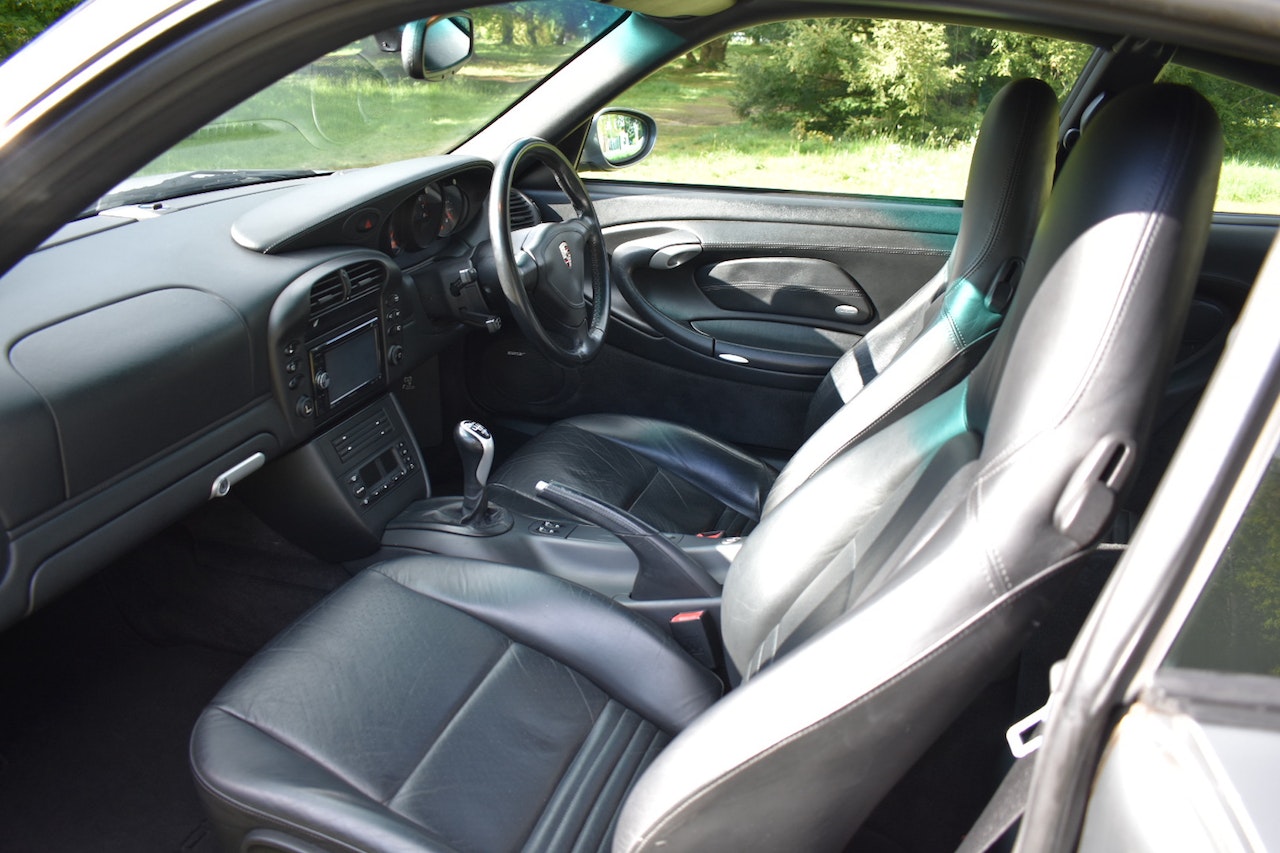 Factory-fitted equipment includes climate control, BOSE surround-sound speakers, and a power sunroof panel. Its original stereo has been replaced with a contemporary touch-screen Pioneer head unit, featuring satellite navigation and USB, aux-in, and SD card inputs. The boot compartment has some scratches and scuffs around the plastic trim, and it has also been slightly modified to house an upgraded Alpine amplifier unit. A space-saver spare wheel is present, along with original tools. 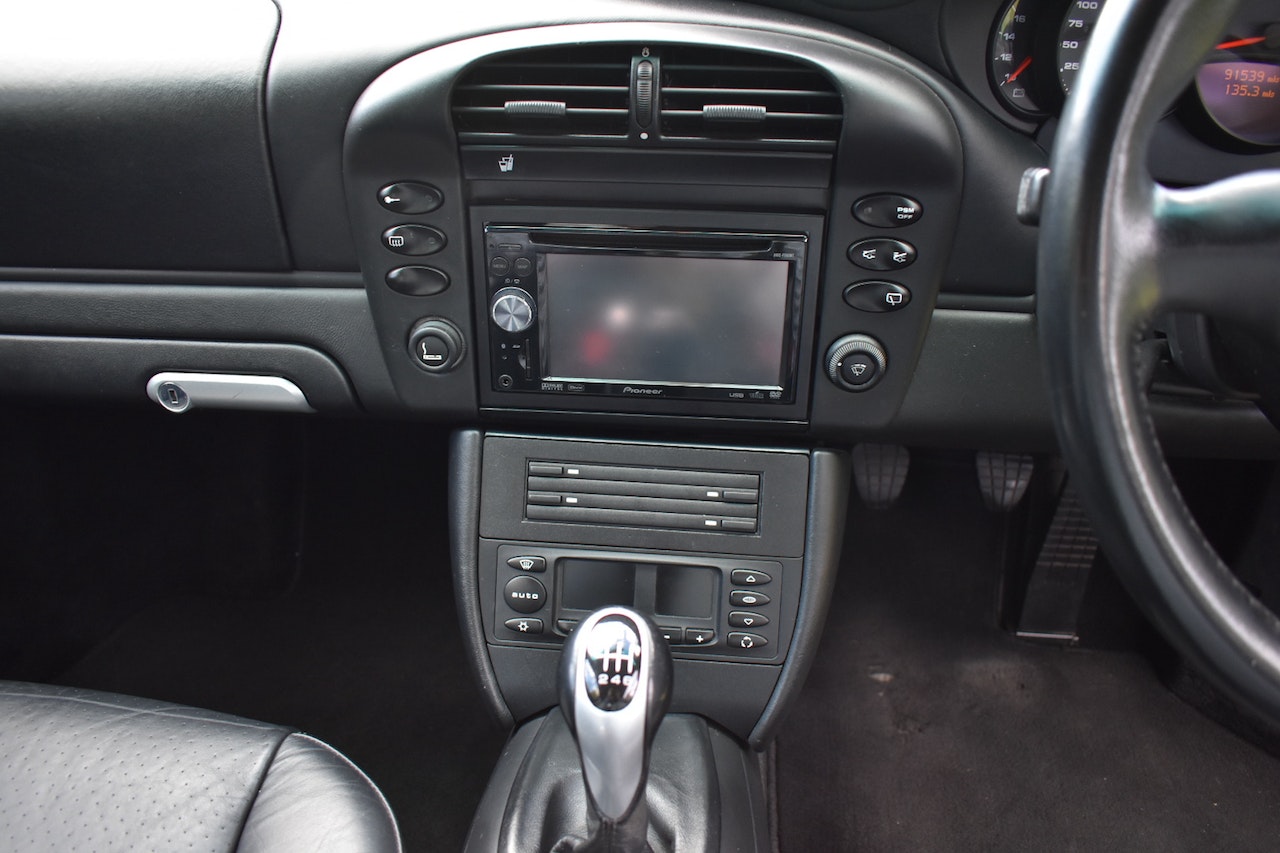 Its last scheduled maintenance was in March 2020 at 91,414 miles, carried out by specialist RPM Technik. A replacement starter motor was fitted, along with an upgraded battery, and a diagnostics check was run. While the car starts and runs well - as shown in the video below - RPM’s inspection did note a camshaft position deviation on one bank that would merit further investigation in the future. The owner was quoted approximately £1,000 in possible costs. 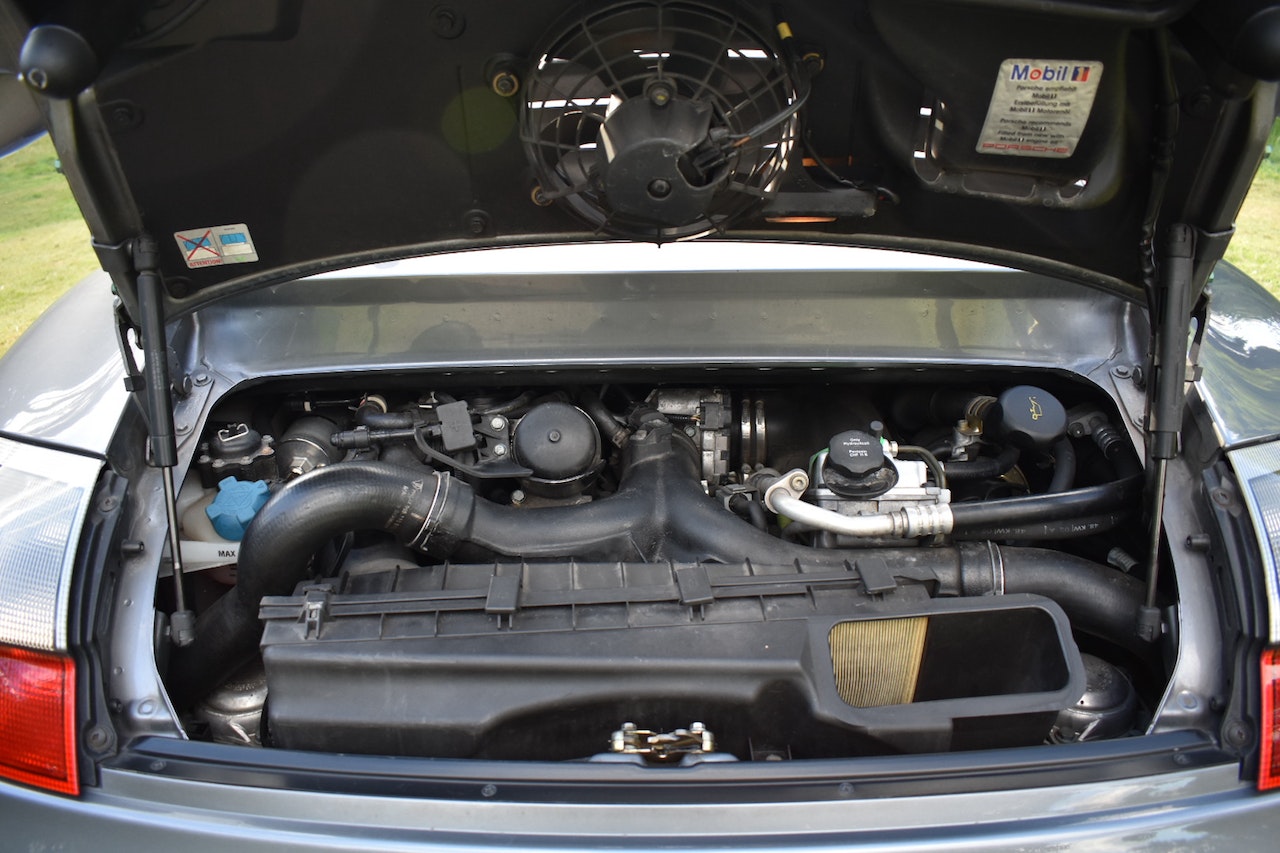 The diagnostics check also noted an O2 sensor fault code, which the technicians suggested might just be a faulty sensor, or could be down to some common corrosion near one of the turbocharger units causing a small O2 leak. Again, it was communicated to the seller as a job for the future, and not requiring urgent attention. 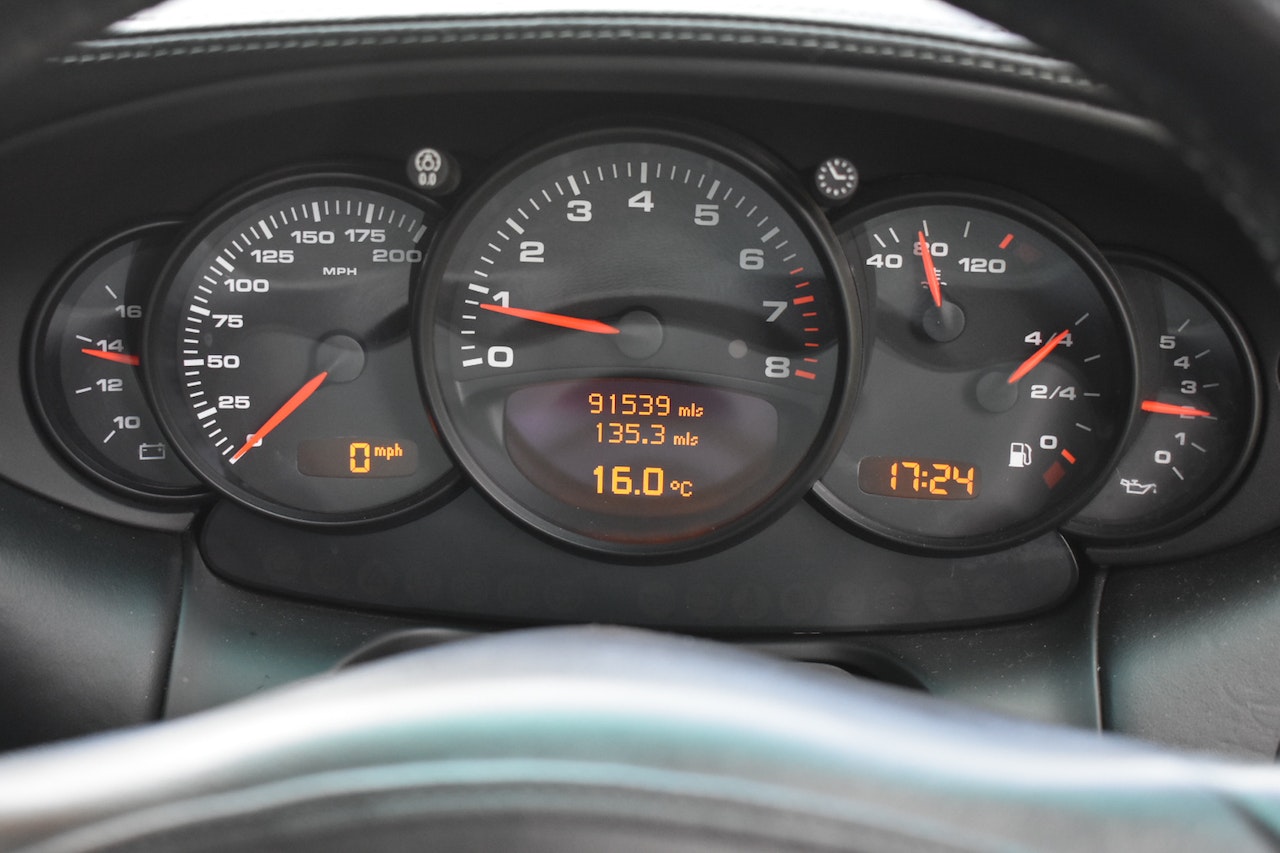 In September 2019, the fuel filter was replaced, as well as the battery. A minor leak was noted in the nearside air-conditioning condenser during this work, so it will likely need replacing soon. Both condensers were previously renewed in 2015. During 2018, more extensive work was carried out, which included new timing chains, tensioner and guide rails, replacement of the exhaust manifold gaskets, and new o-rings and gaskets for the turbochargers. A new alternator exciter cable was also fitted, along with a replacement power steering reservoir. The clutch and dual-mass flywheel were replaced in March 2015 at 75,142 miles. 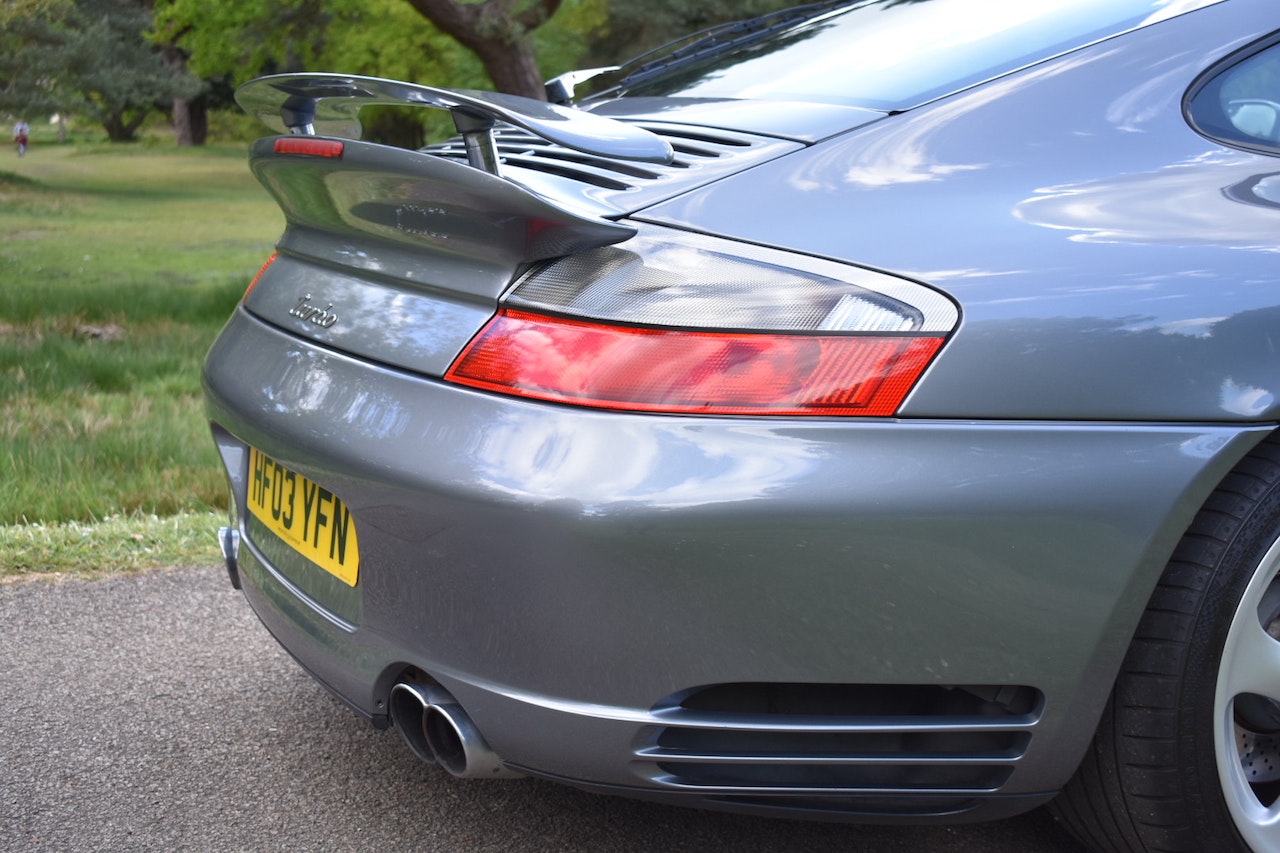 The most recent MOT test was on 4 January 2020 at 89,705 miles, which resulted in a clean pass with no advisories. Other than a failure in 2010 for dirt on the number plates, and in 2012 for a faulty position lamp, it has always passed first time. 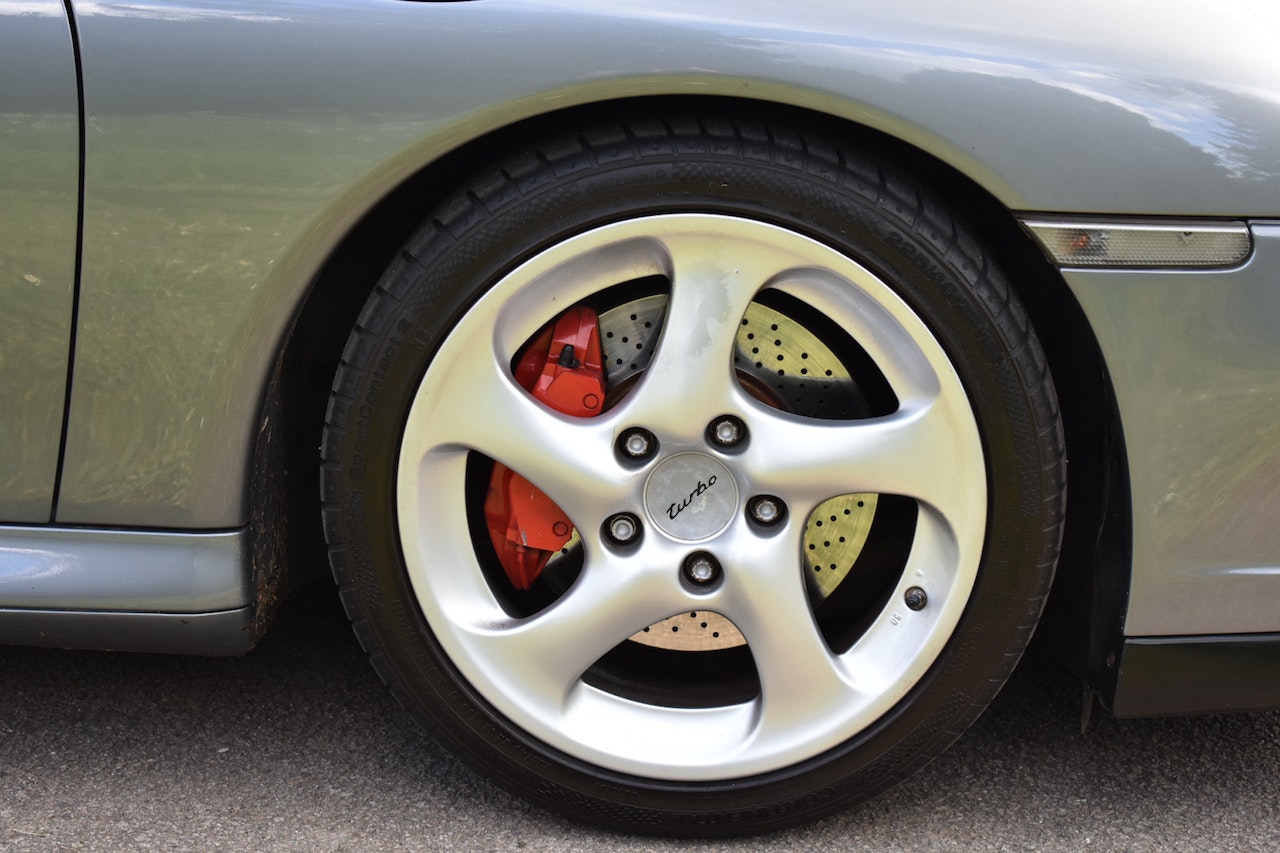 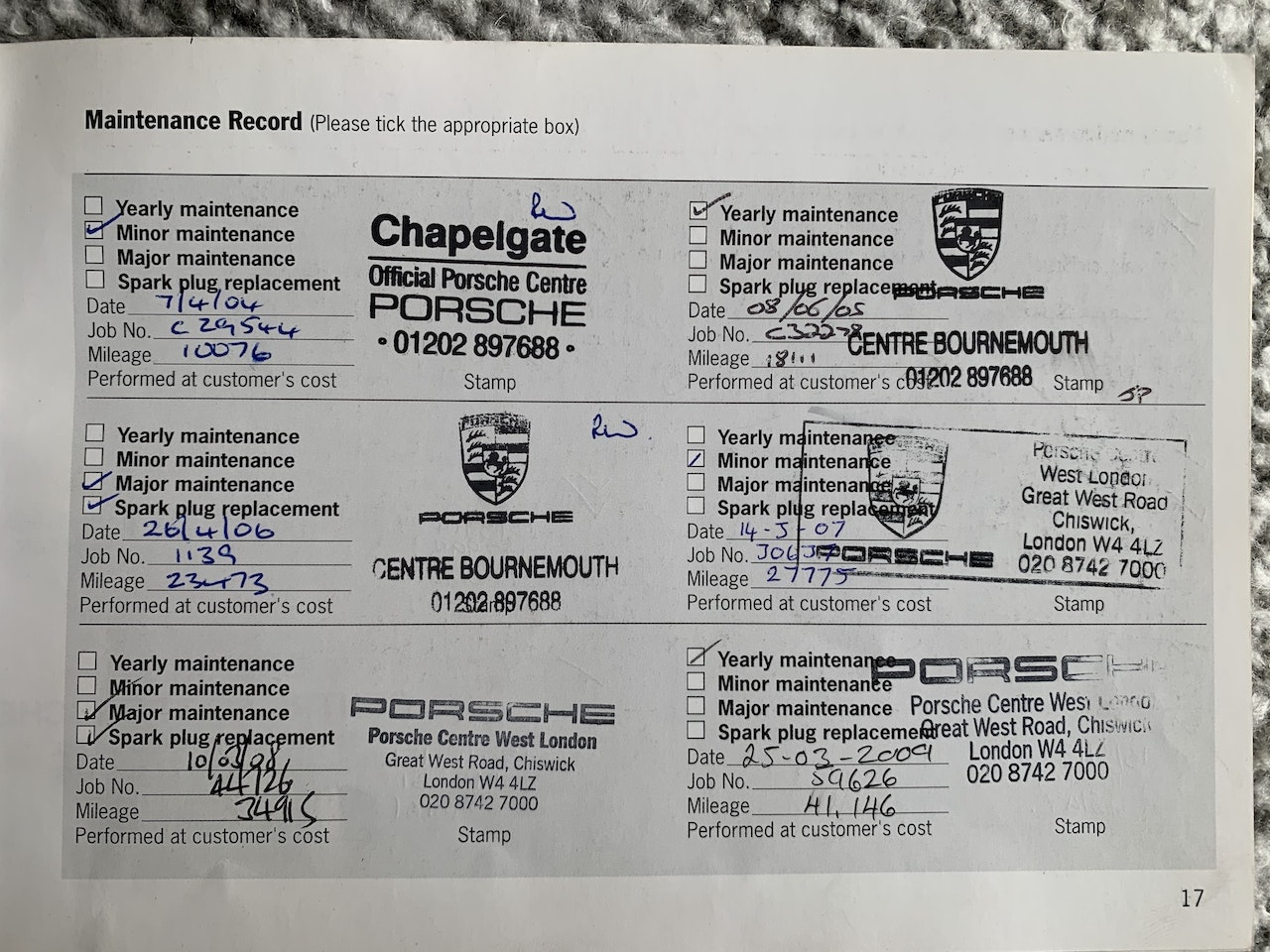 Accompanying the car is the original black wallet, containing the driver’s manual, stamped service booklet and other factory-supplied literature. There is also a good history file of receipts, invoices and old MOT certificates. 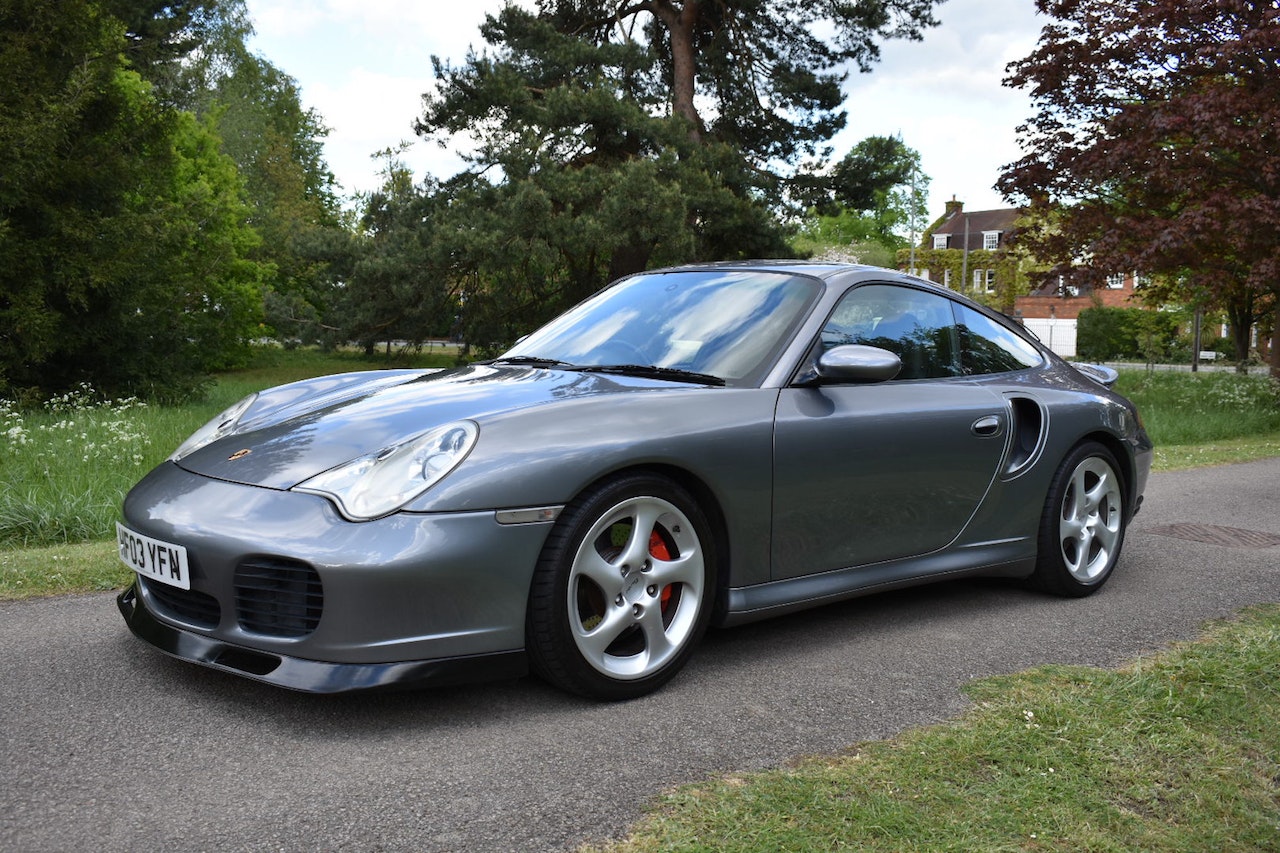 This Porsche 996 Turbo is one of the consummate all-weather supercars. The service history shows that it has been regularly maintained, though there are evidently a few jobs for the next owner to attend to in the near future. It is presented in a very smart colour combination, and the combination of a powerful flat-six engine with a slick manual transmission will surely mean that this 911 remains a popular car with enthusiasts through the generations.

Please note: the car is currently covered by a finance agreement, but this will be cleared before handing over to the next owner.