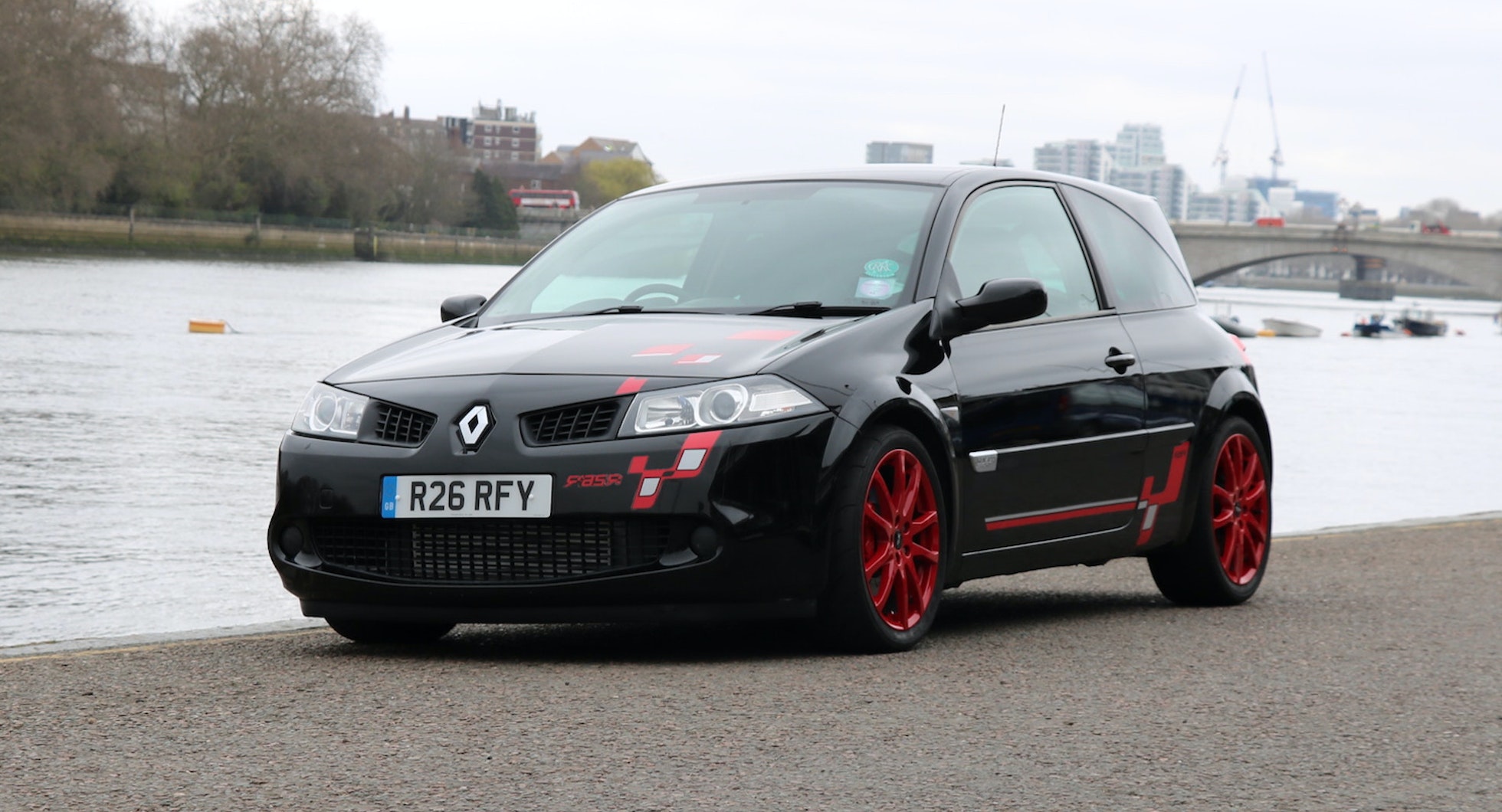 This Renaultsport Megane R26.R is a limited-edition hot hatch hero of the modern era, fresh from a recent service and presented in superb condition. It is powered by the turbocharged 2.0-litre four-cylinder engine, and driven through the front wheels via a six-speed manual transmission and limited-slip differential. The odometer shows 41,026 miles from new. 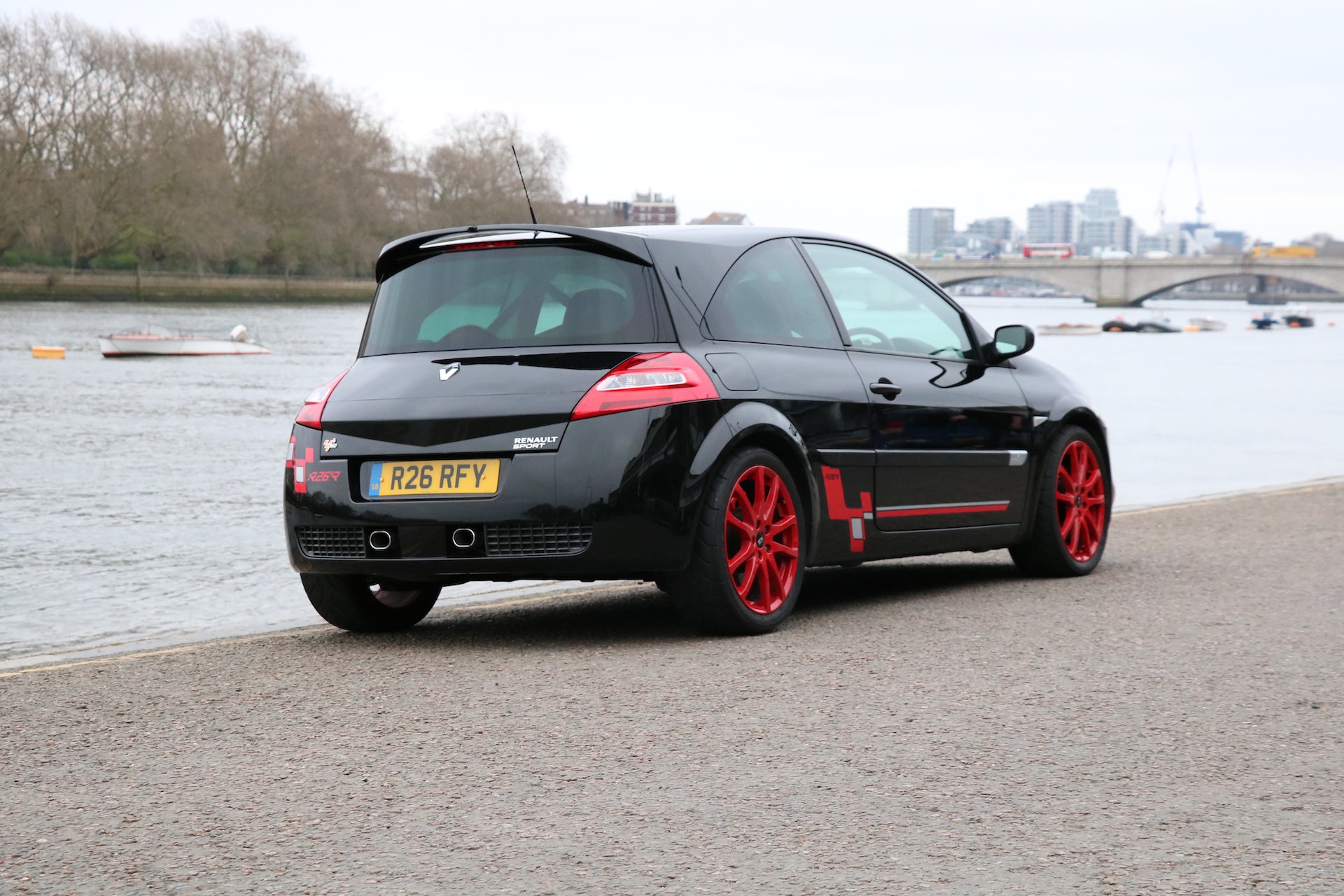 Based on the impressive R26 model, with its improved Cup chassis, uprated Brembo brakes and sports exhaust, the R26.R version took lightweighting to new levels for a hot hatch. The rear seats and retracting seat belts were removed, along with passenger and curtain airbags, the climate control, heated rear screen, headlight washers, stereo system, and most of the soundproofing. New coil springs were fitted, and the shock absorbers were recalibrated. 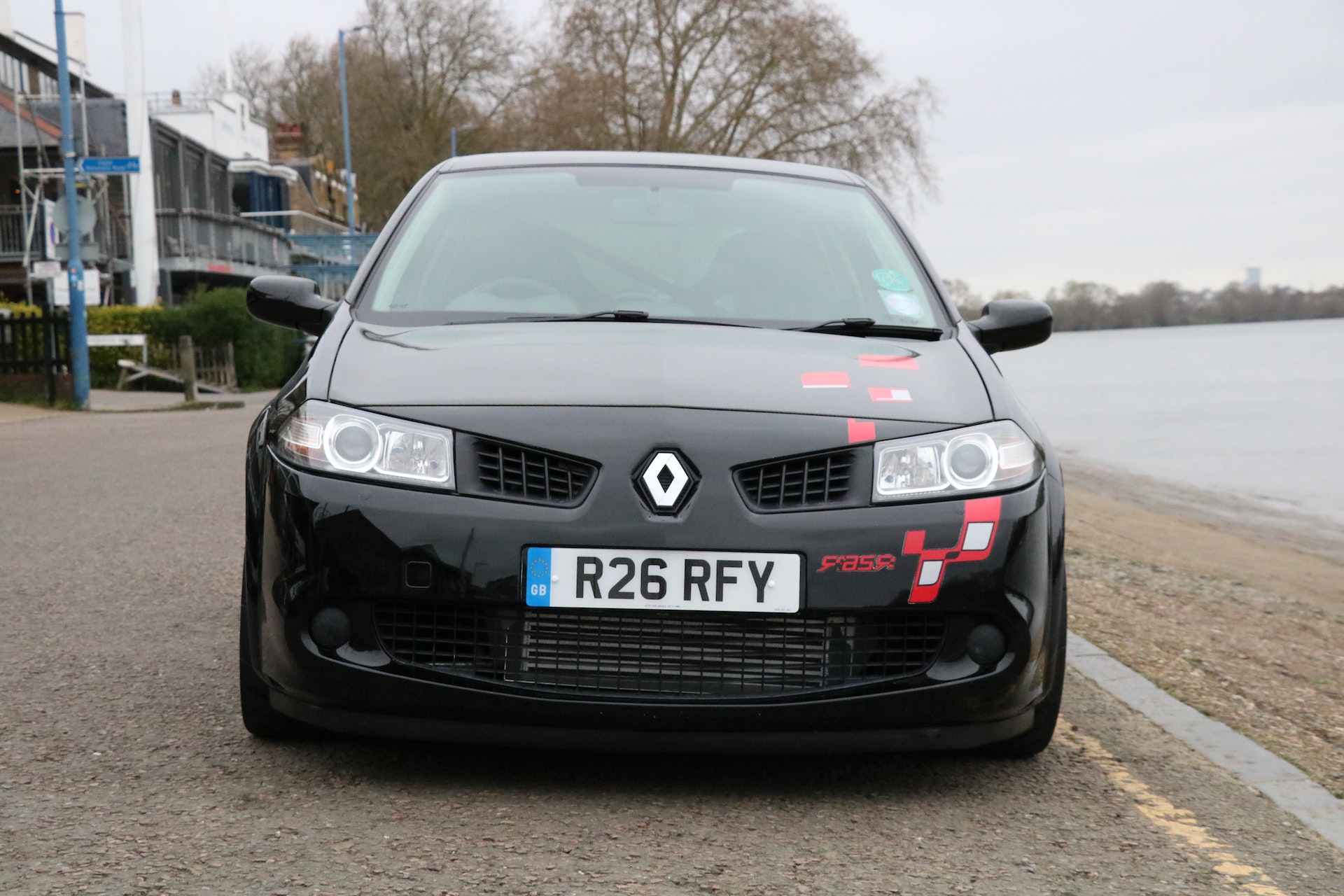 Its metal bonnet was swapped for a carbon-fibre item, the rear screen and rear quarter windows were made in polycarbonate rather than glass, and the Recaro seats were discarded in favour of carbon-fibre shell Sabelt buckets. In total, the changes saved a substantial 123kg compared to the standard R26. This hardcore road car achieved the 0-60mph sprint in just six seconds, with a top speed of 147mph, and at launch was the fastest front-wheel-drive production car around the Nürburgring. 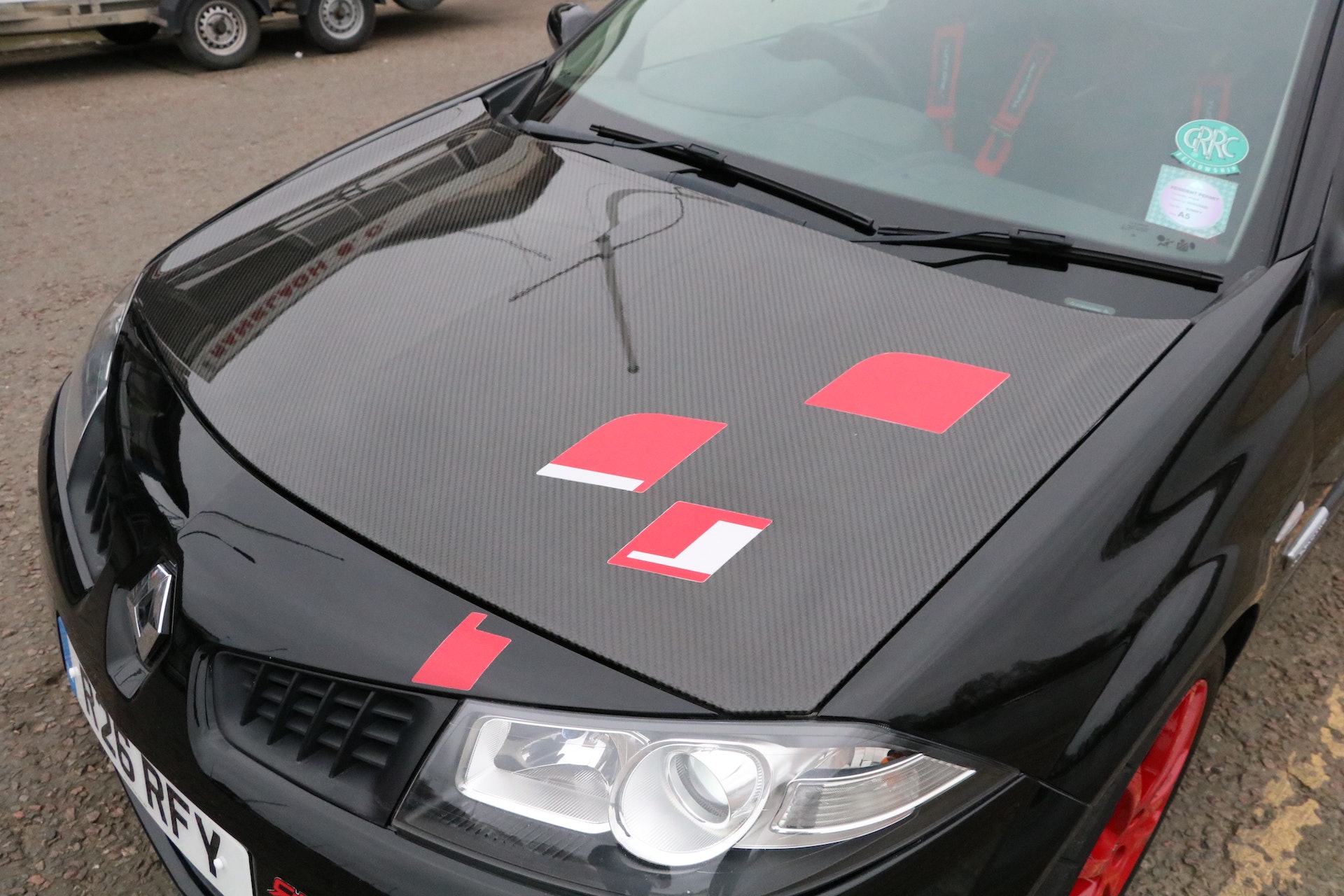 Just 450 examples were built, of which 230 came to the UK, and the plaque in the cabin confirms that this R26.R is number 34 of those cars. It was supplied via the Ware Garage main dealer in Hertford, and was first registered in June 2009. There are four previous registered keepers on the V5C log book. The seller has owned the car for the last year, enjoying around 1,000 miles behind the wheel during that time. 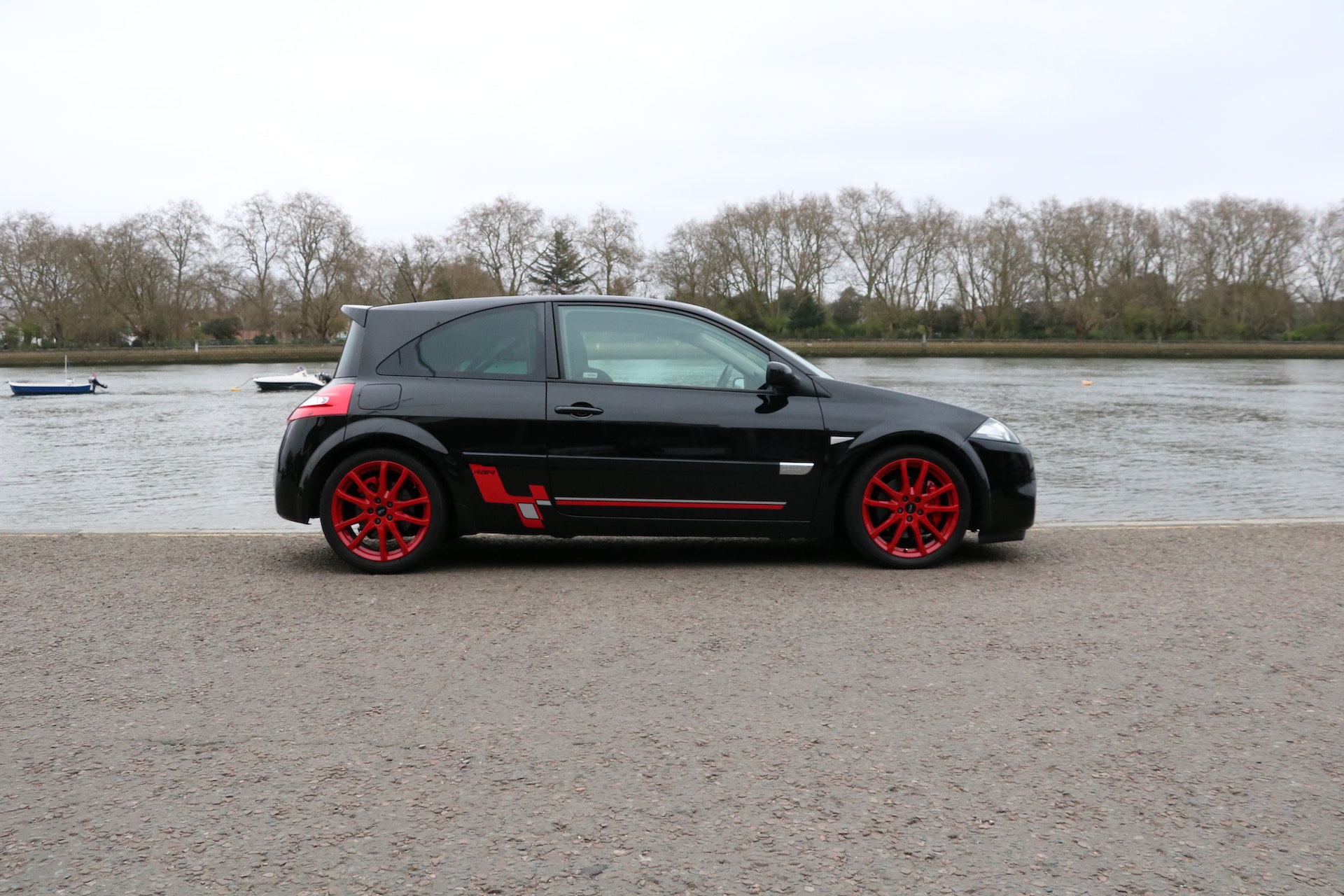 The bodywork of this car is in great condition, with no dents or damage to the metal on any of the panels. There are some stone chips to the front bumper and wing mirror caps, and on the trailing edge of the rear wheel arches, but otherwise the Deep Black paint appears to be in very good order, with a smooth and glossy finish around the car. 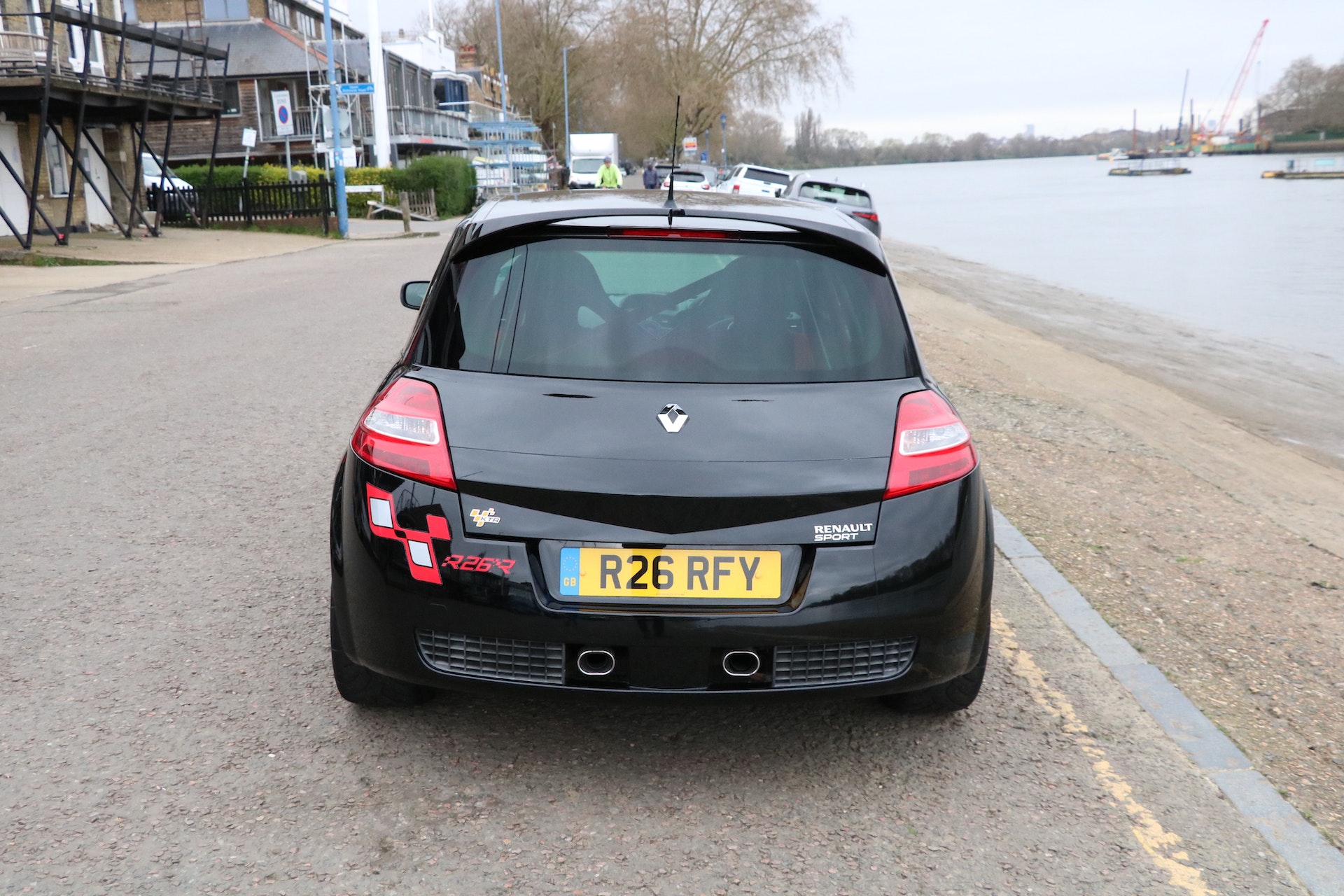 There are a few small scuffs on the lip spoiler, and the plastic around the door mirrors has faded slightly, but this R26.R presents superbly. The carbon-fibre bonnet is pristine, with no chips in the lacquer. It sits on the original 18-inch Interlagos alloy wheels in Capsicum Red, which are in great condition with no kerbing marks. 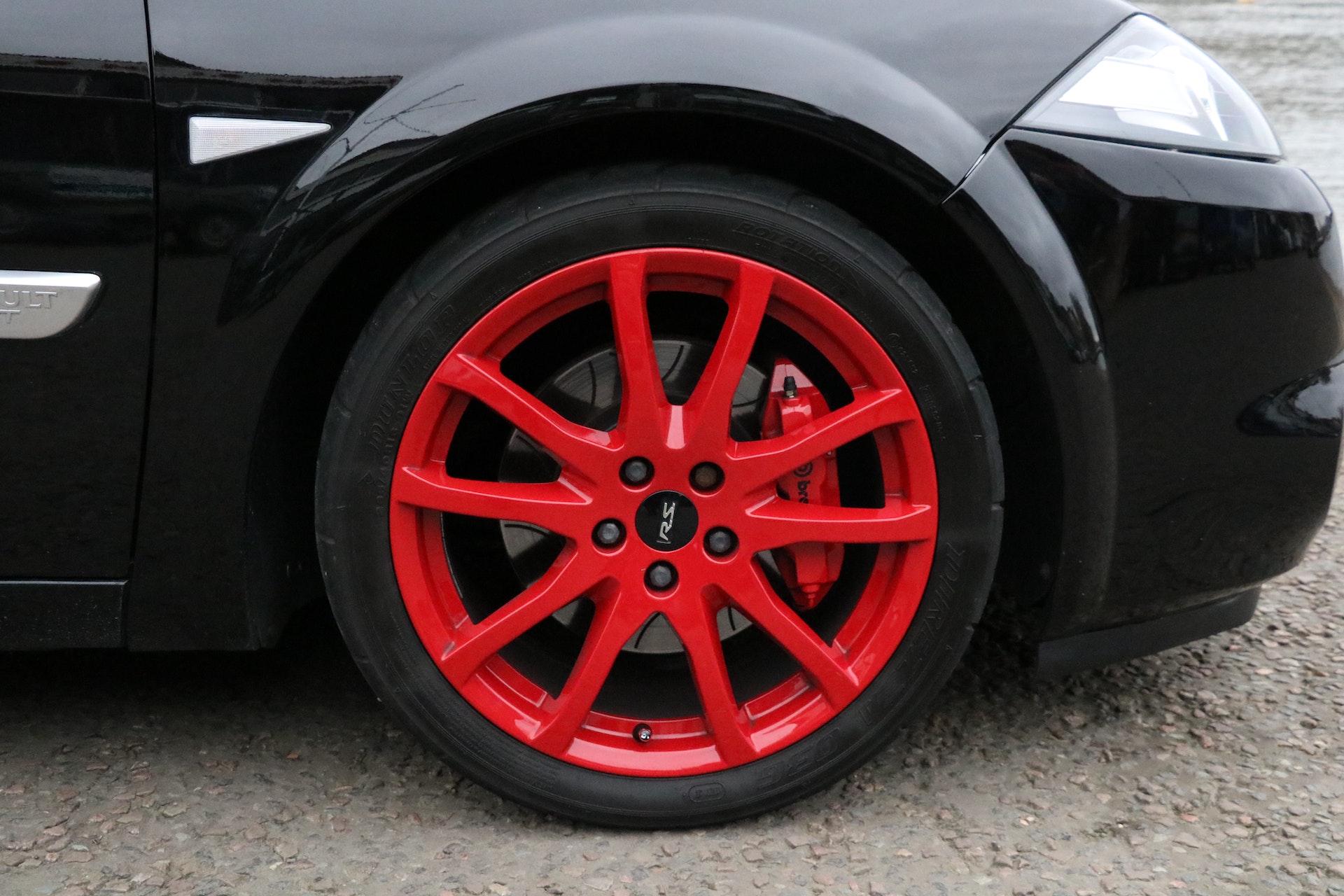 Inside, the cabin remains in superb order, with very little wear to the fabric on the original carbon-fibre Sabelt seats. They are currently fitted with Turn One four-point harnesses, but the original six-point items are safely boxed and included in the sale. It was specified from the factory with the optional roll cage, and still has the Sabelt luggage net in place. 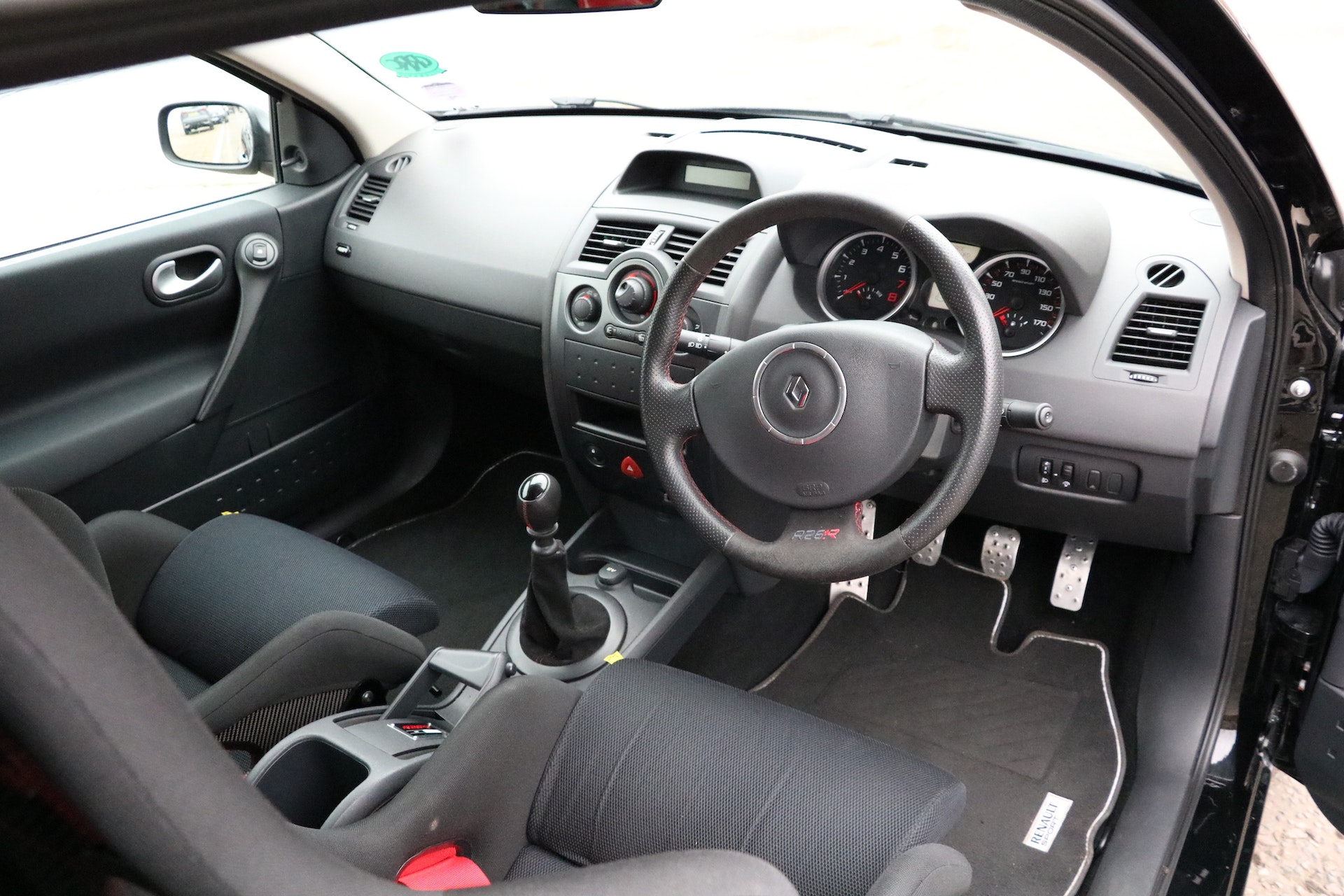 Its steering wheel and short-throw gear lever are trimmed in a combination of leather and suede, and they remain in very good condition. The headlining is in great shape, and all of the switchgear works perfectly. The only real concession to comfort over performance is the presence of basic air-conditioning, which was a standard feature from the factory. 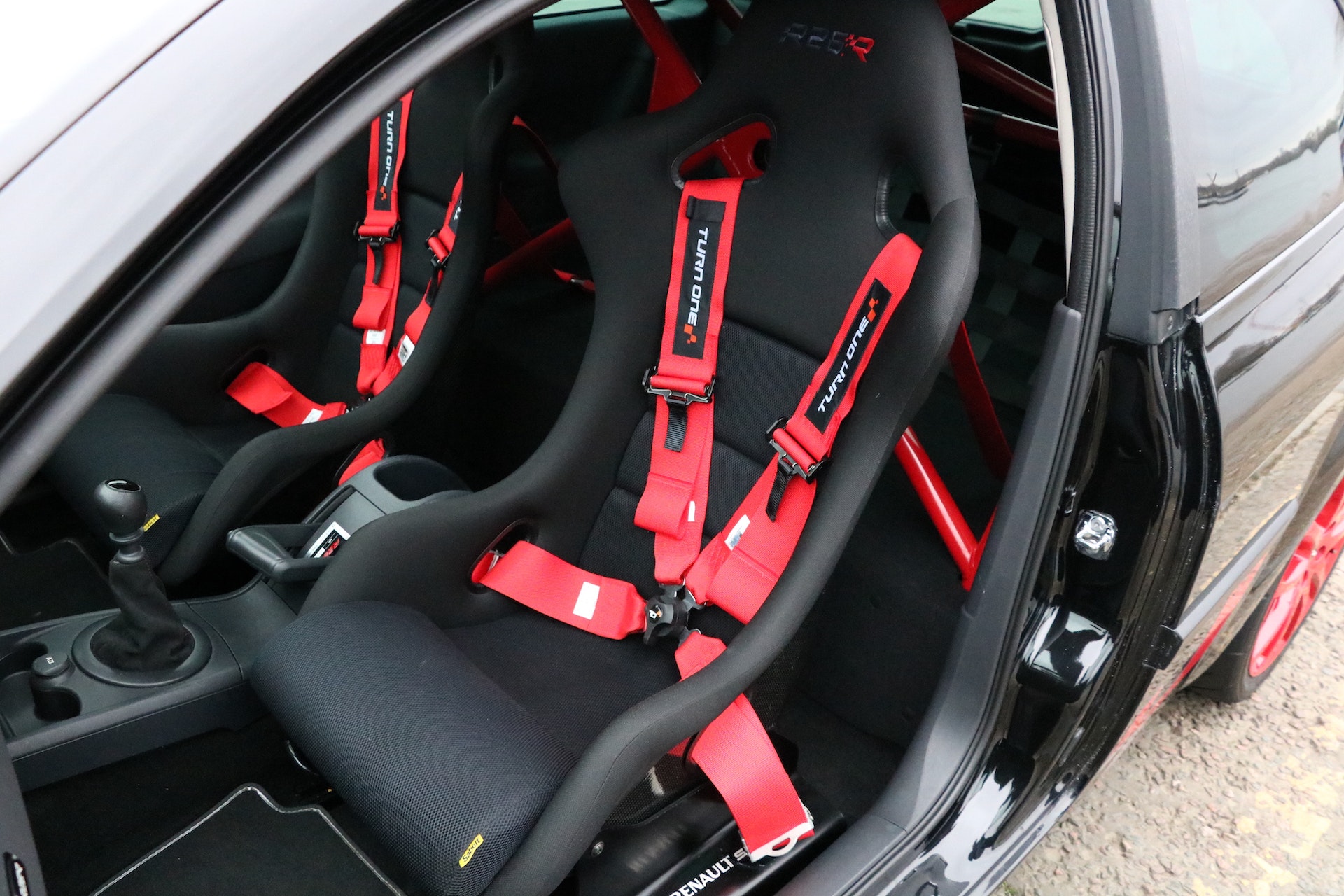 Beyond its original specification, this R26.R has a few subtle upgrades, comprising a light remap to 262bhp by Renaultsport specialist K-Tec Racing (KTR), braided brake lines, and an uprated intercooler - though the original intercooler accompanies the car if requested. KTR has also carried out servicing over the last few years, with the most recent in July 2019 at 39,961 miles, including renewal of the engine oil and oil filter. 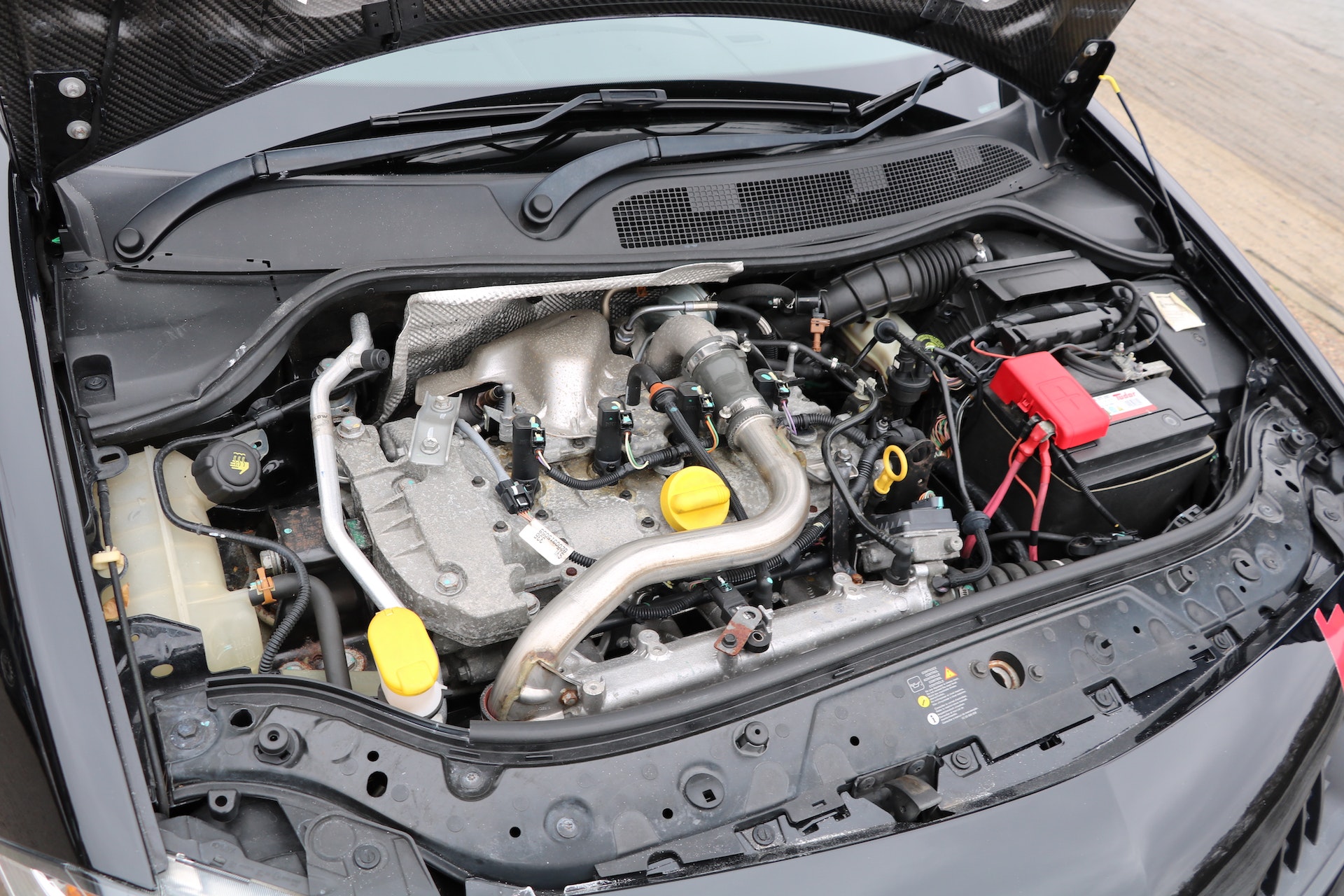 The cambelt, auxiliary belt and water pump were all replaced in May 2019 at 39,240 miles, also carried out by KTR in Dorset. Overall, this car’s maintenance history is superb, having been seen and serviced every year from new. 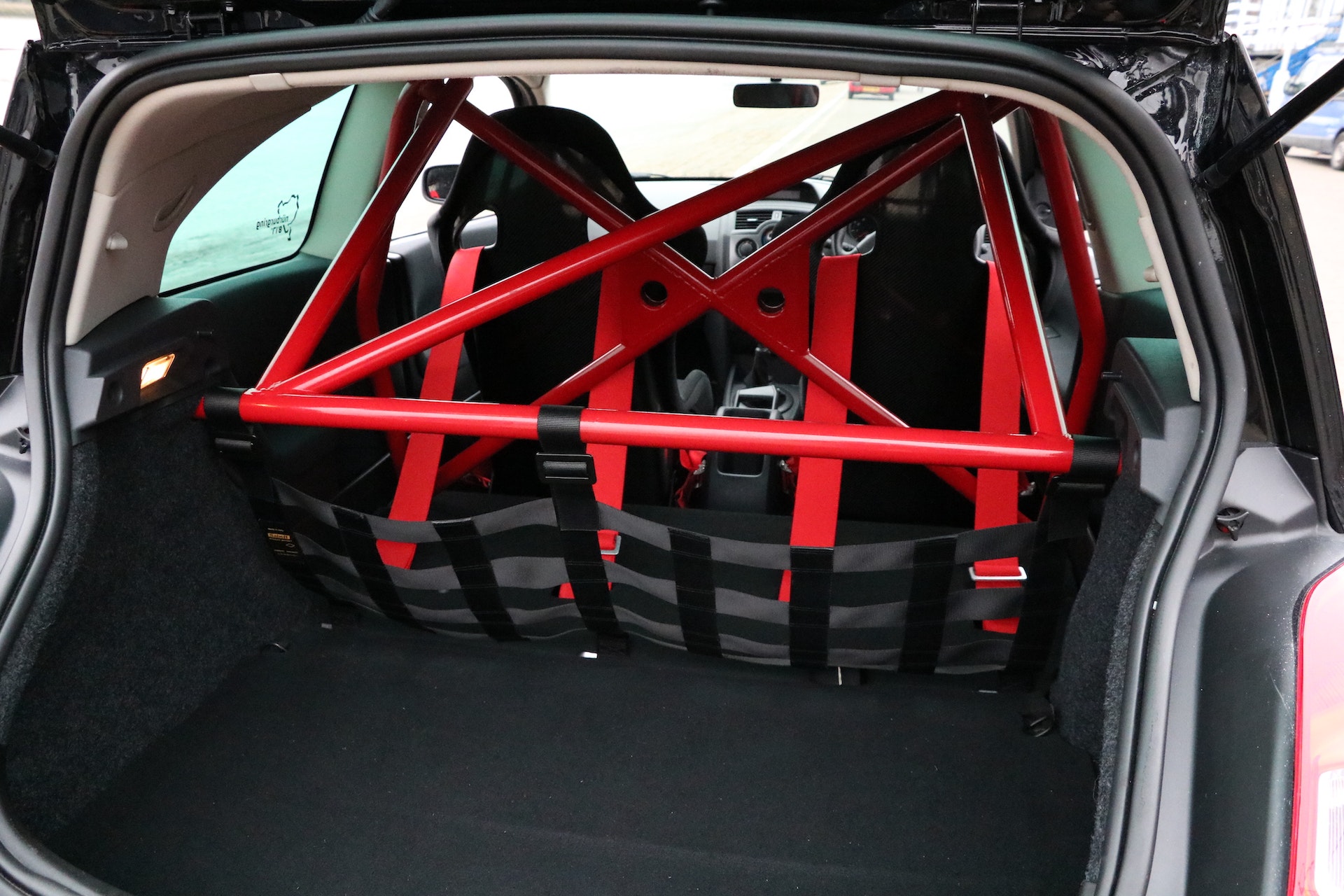 Its most recent MOT test was on 13 July 2019 at 39,956 miles, which resulted in a clean pass with no advisories whatsoever. It has a sound MOT record, and has never failed an annual test. The alloy wheels are fitted with a set of Dunlop Direzza 03G tyres in size 235/40 R18, which are in very good order, with approximately 6mm of tread remaining. 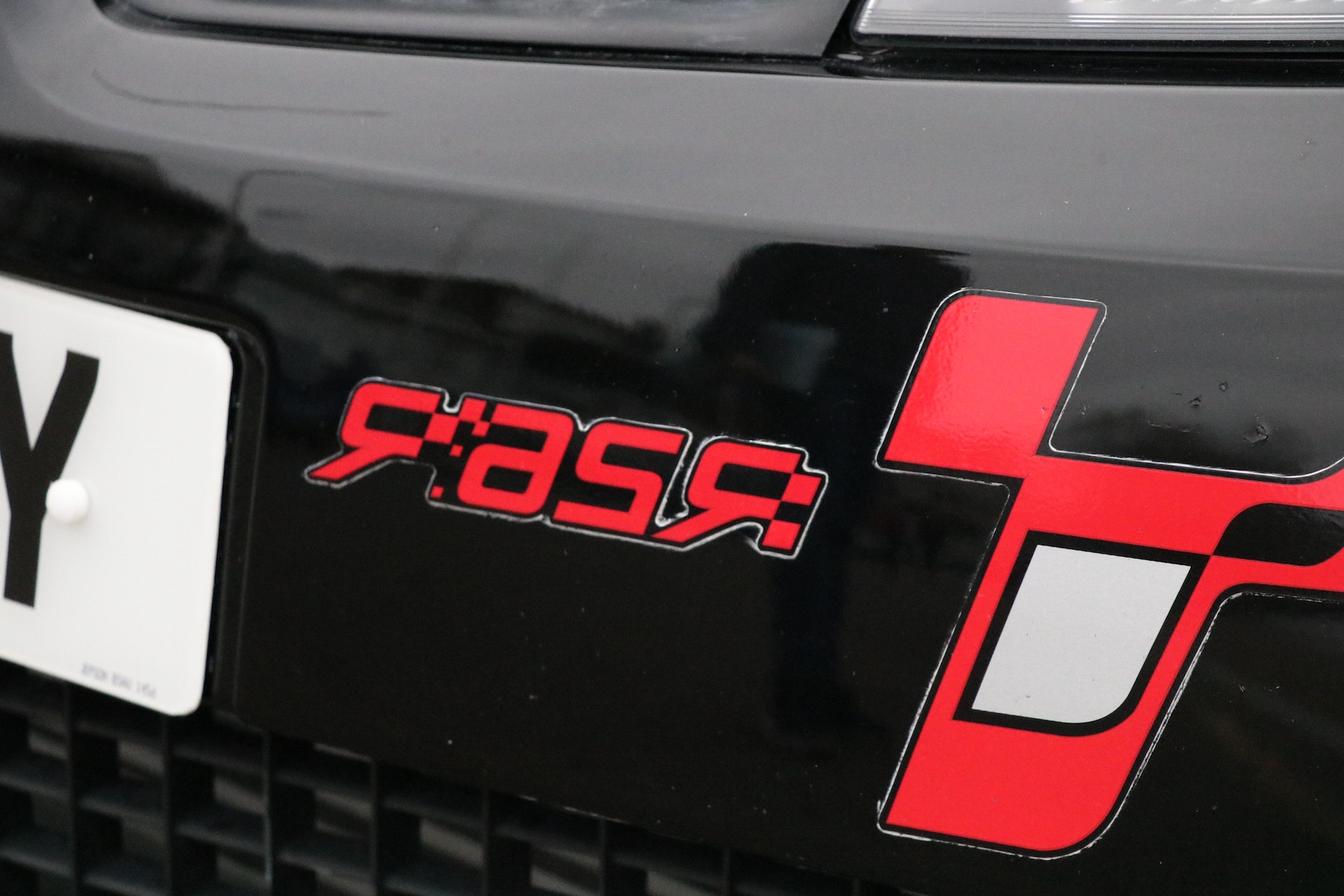 Accompanying the car is a full complement of books in the original fabric pouch, including the owner’s manual, R26.R supplement, and the warranty and maintenance record. There are various invoices and receipts in the history file, as well as a copy of the Certificate of Conformity, and a dynamometer report from November 2019. 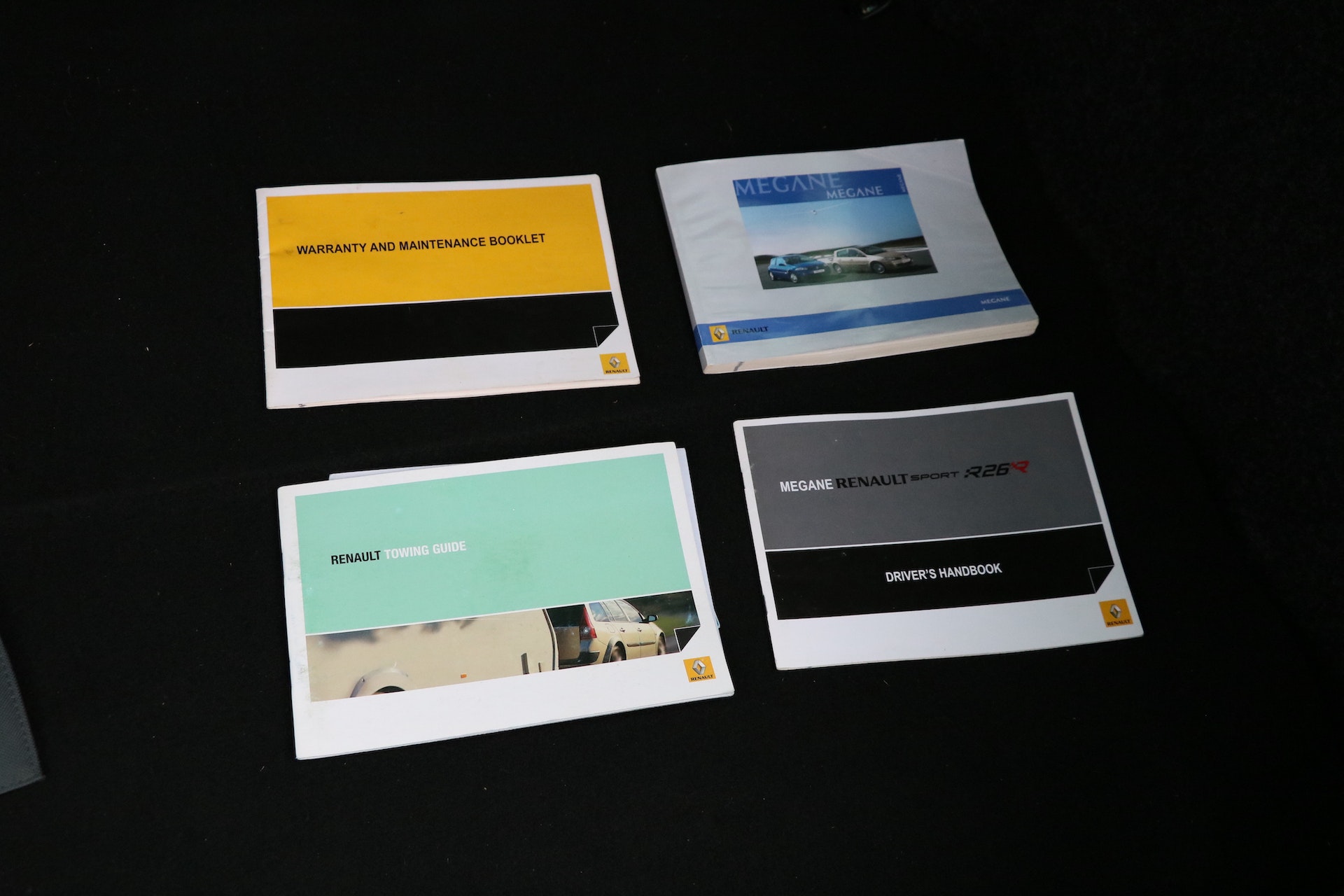 At the car’s launch in 2008, Steve Sutcliffe, then writing for Autocar, said: “As a genuine driver’s car the Renault Megane R26.R has few rivals, and not just in the world of hot hatchbacks but at any level, at any budget.” 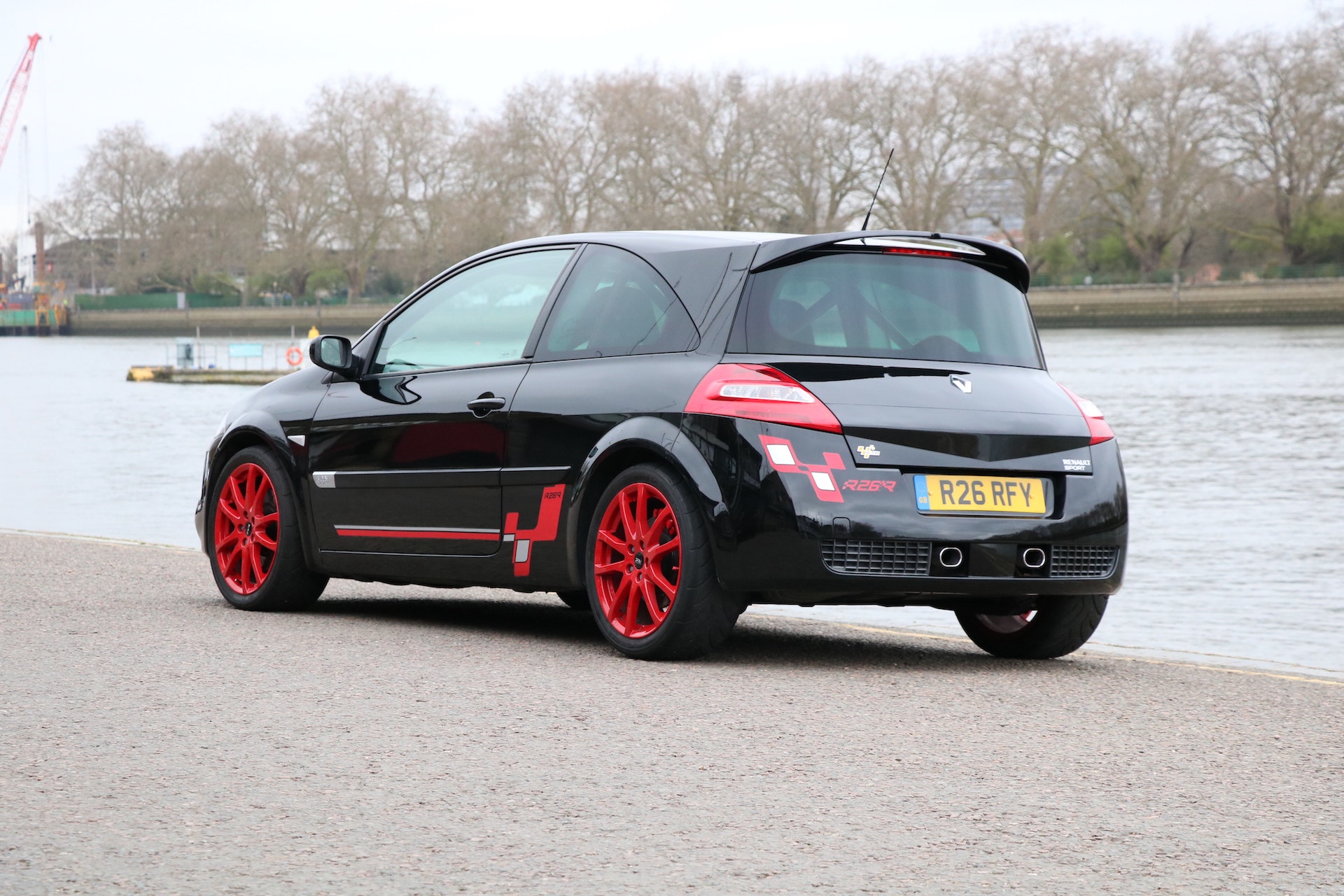 Concluding Evo magazine’s time with a long-term R26.R test car, Henry Catchpole compared the quality of its driving experience to the 911 GT3 RS, adding: “The sheer joy it gave on just about every drive was the best thing about this Megane. We’ve banged on about it so much because it really is such a good drivers’ car [...] I feel very lucky to have lived with the R26.R for a wonderful eight months”. 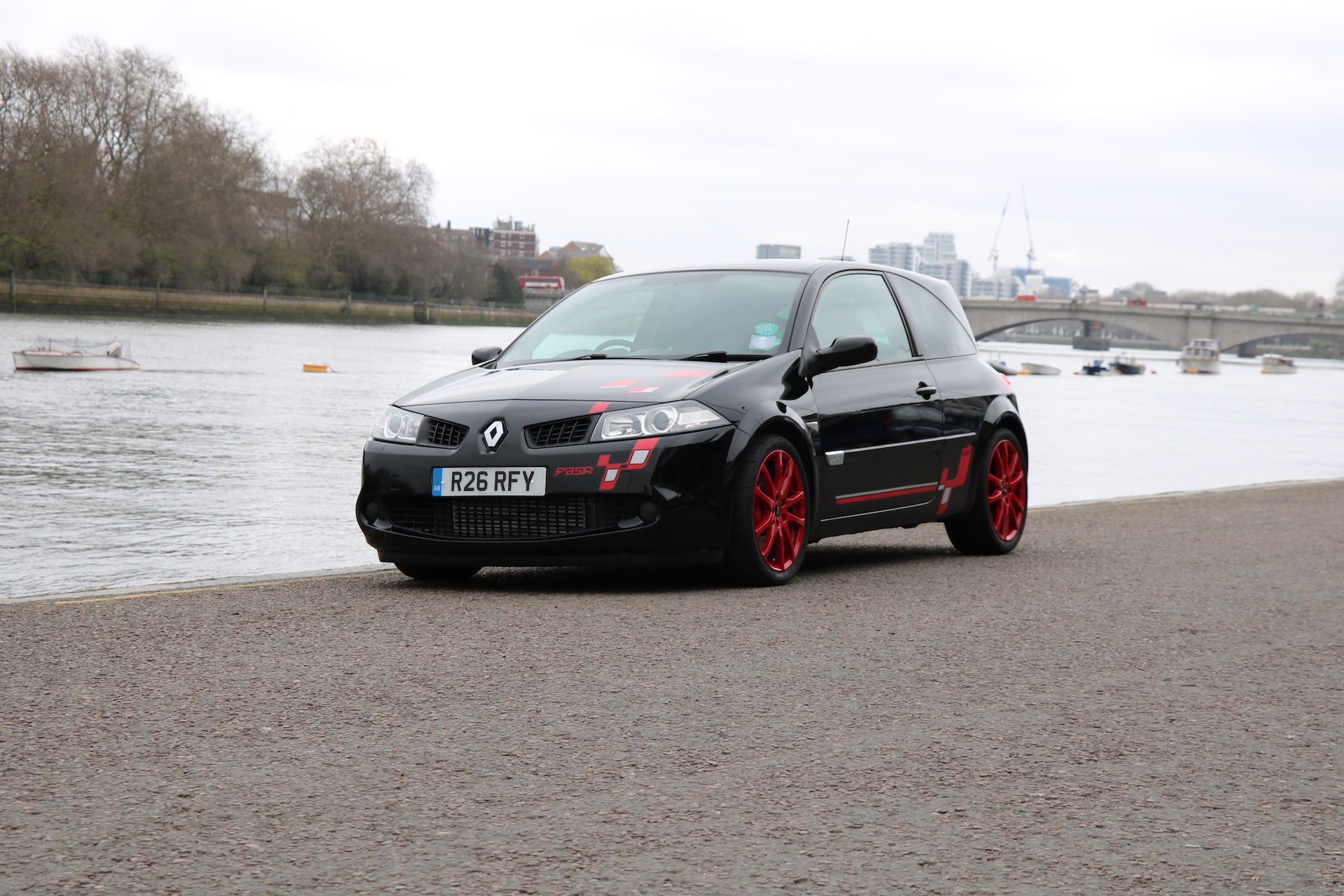 This Renaultsport Megane R26.R is an outstanding road-legal hot hatch, which can also thrill on the track. The car is presented in superb order, with impeccable service history, and with only a few discreet modifications that enhance the performance without detracting from the wonderful original appearance. The R26.R is unquestionably a modern classic, and it is increasingly hard to find one in such excellent condition as this example.