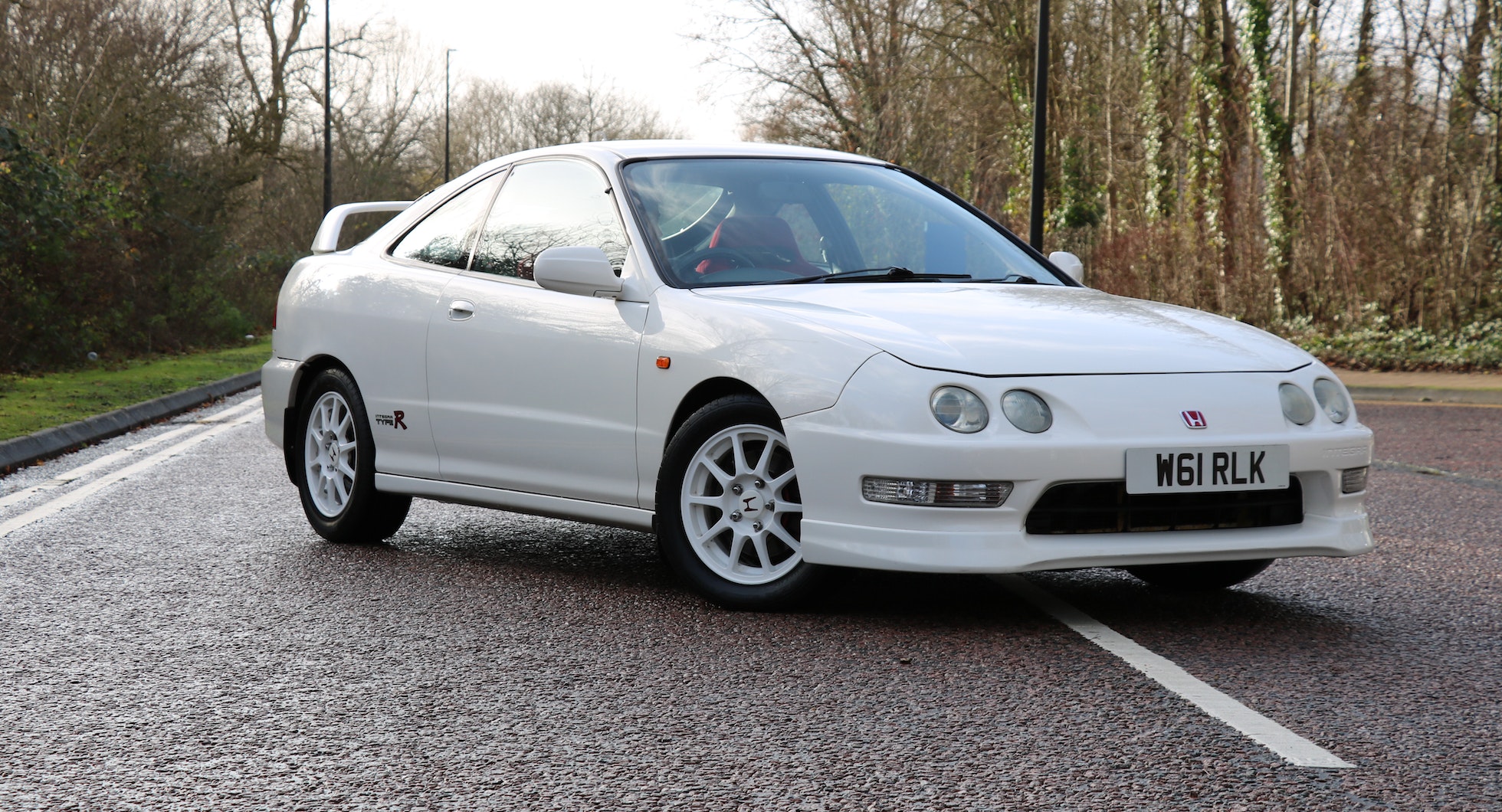 This 2000 Honda Integra Type R is an original and unmodified example of a contemporary automotive hero - a car described by Evo magazine as “the greatest front-wheel-drive performance car ever.” It is powered by the 187bhp 1.8-litre B18C VTEC engine, which revs to 9,000rpm, and is driven through a close-ratio five-speed manual transmission. The odometer shows 112,919 miles from new. 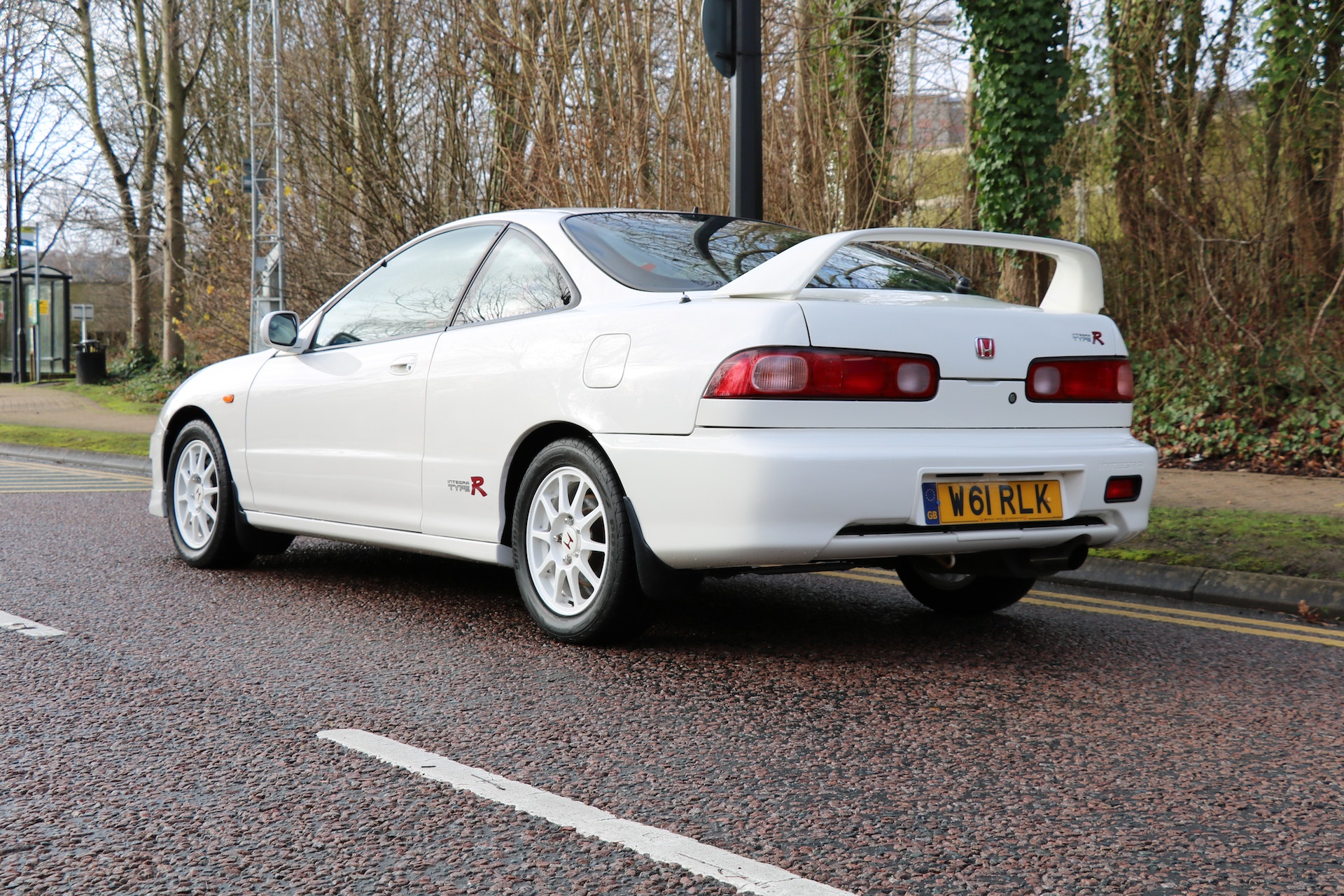 First registered in June 2000, this Integra Type R is one of the last UK domestic market DC2 models, and as such features uprated brakes from the factory as well as air-conditioning. There are four previous keepers on the log book, and it has been owned by the vendor for nearly four years, who has enjoyed around 11,000 miles on the road. 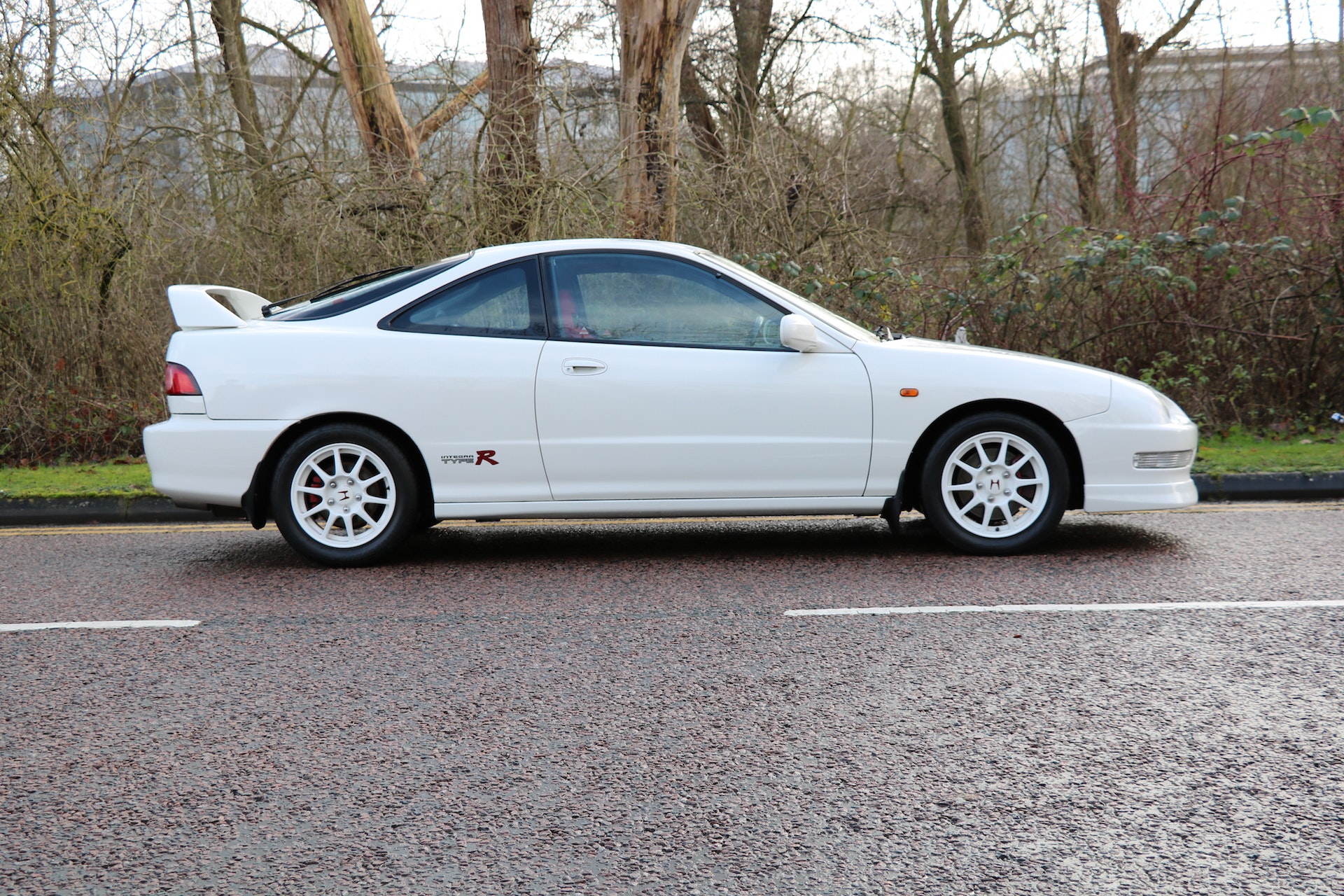 The bodywork is finished in the classic Championship White hue, and remains in very good order. The Integra Type R is susceptible to corrosion, but an invoice in this car’s history file confirms that the front wings were cleaned out, repaired and repainted in 2010, at the same time as a repair to the nearside rear quarter panel, and a respray of the front bumper and nose to rectify stone chips. 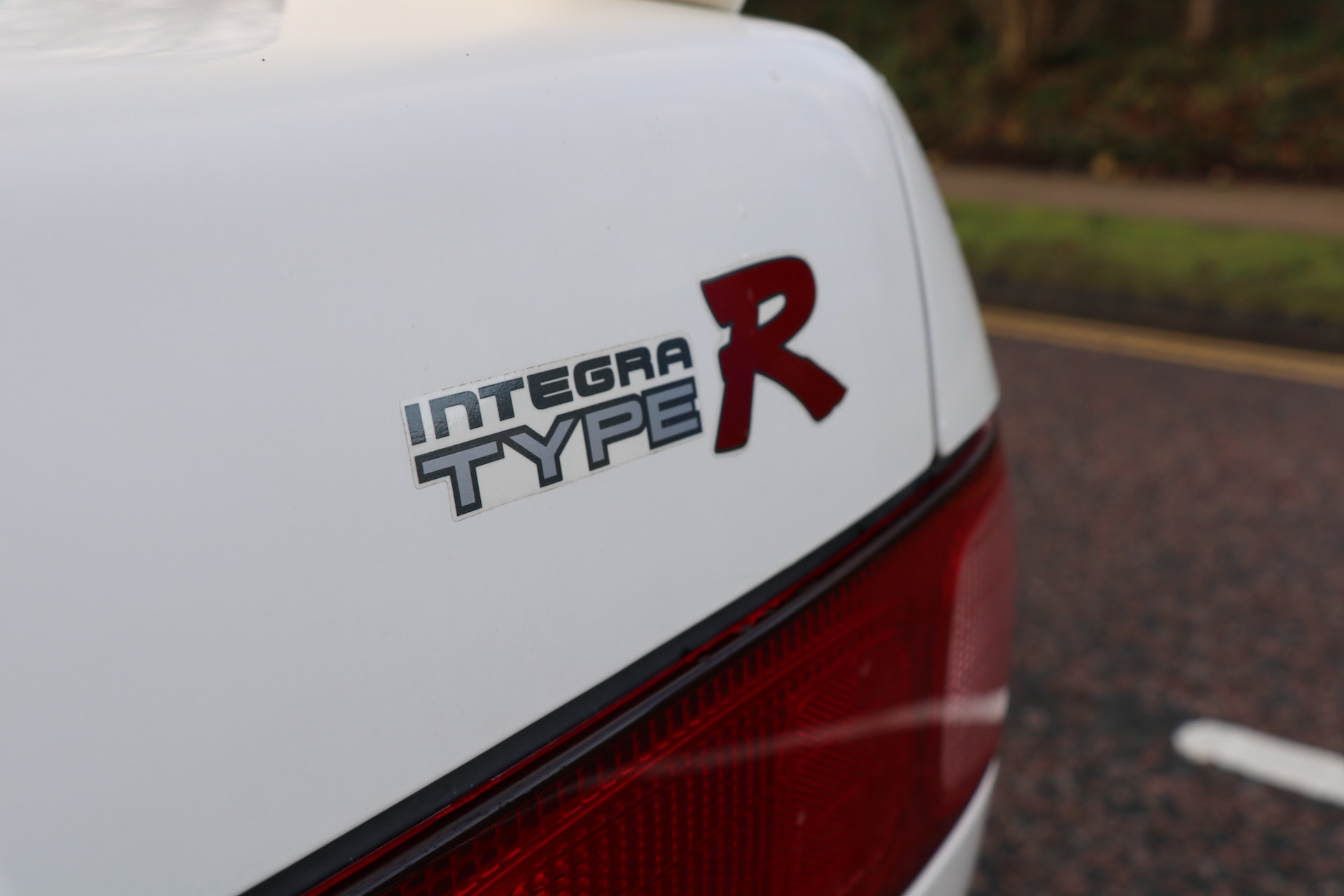 The rear arches were attended to in July 2016, including fresh paint in the original colour. Today, the car presents smartly, with the vendor noting a few small scuffs underneath the front splitter, as well as some minor bubbling on the rear wheel arches - all of which is documented in the photo gallery below. It sits on the original set of 15-inch 10-spoke alloy wheels, which have a few blemishes in the white paint finish, but no kerbing damage. 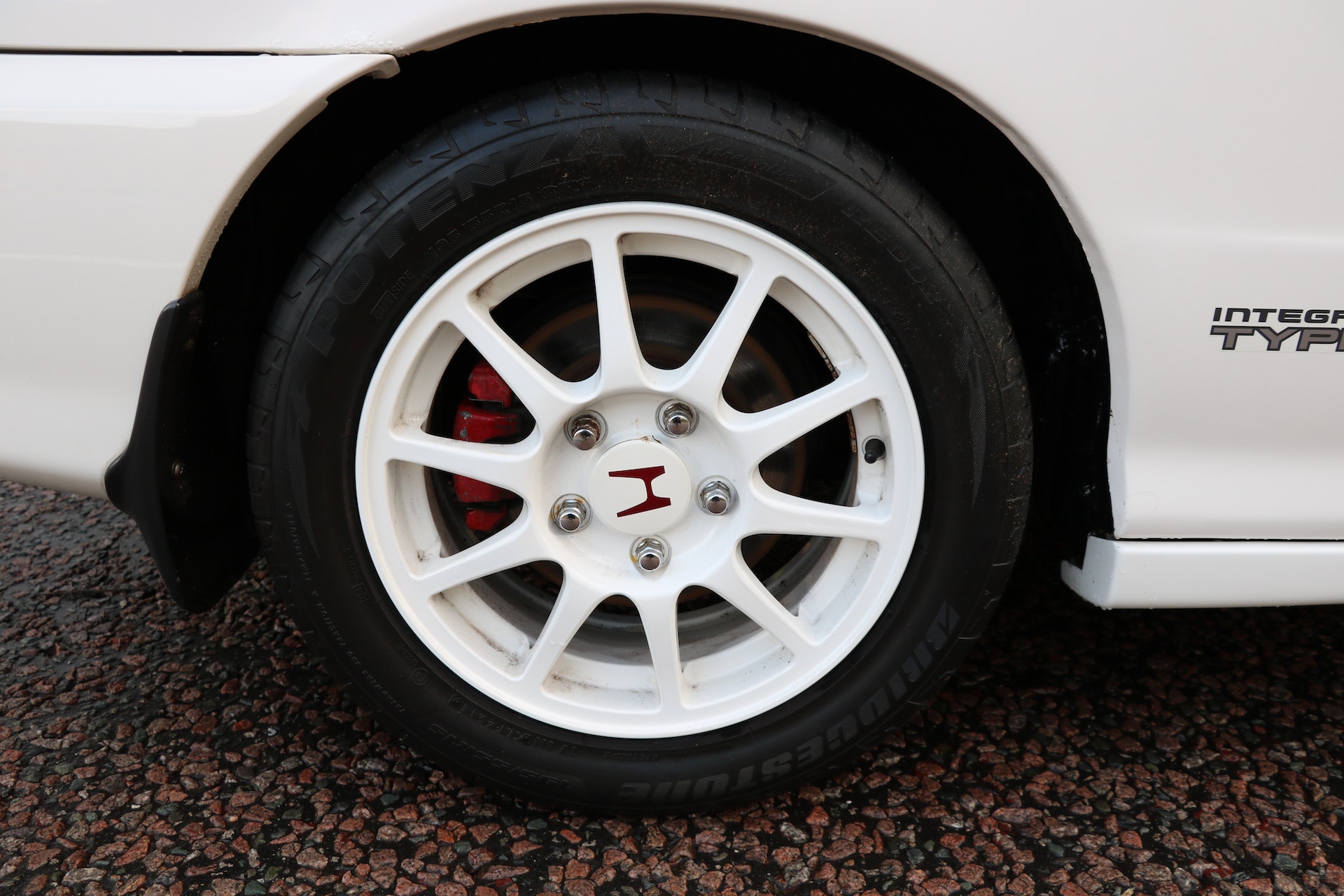 Its cabin is trimmed in the original combination of red suede and cloth for the front Recaro seats, and black suede and cloth on the rear bench. Other than a small nick on the driver’s seat, there is no damage or notable wear flagged by the vendor, and the full photo set showcases the superb condition of the upholstery throughout. 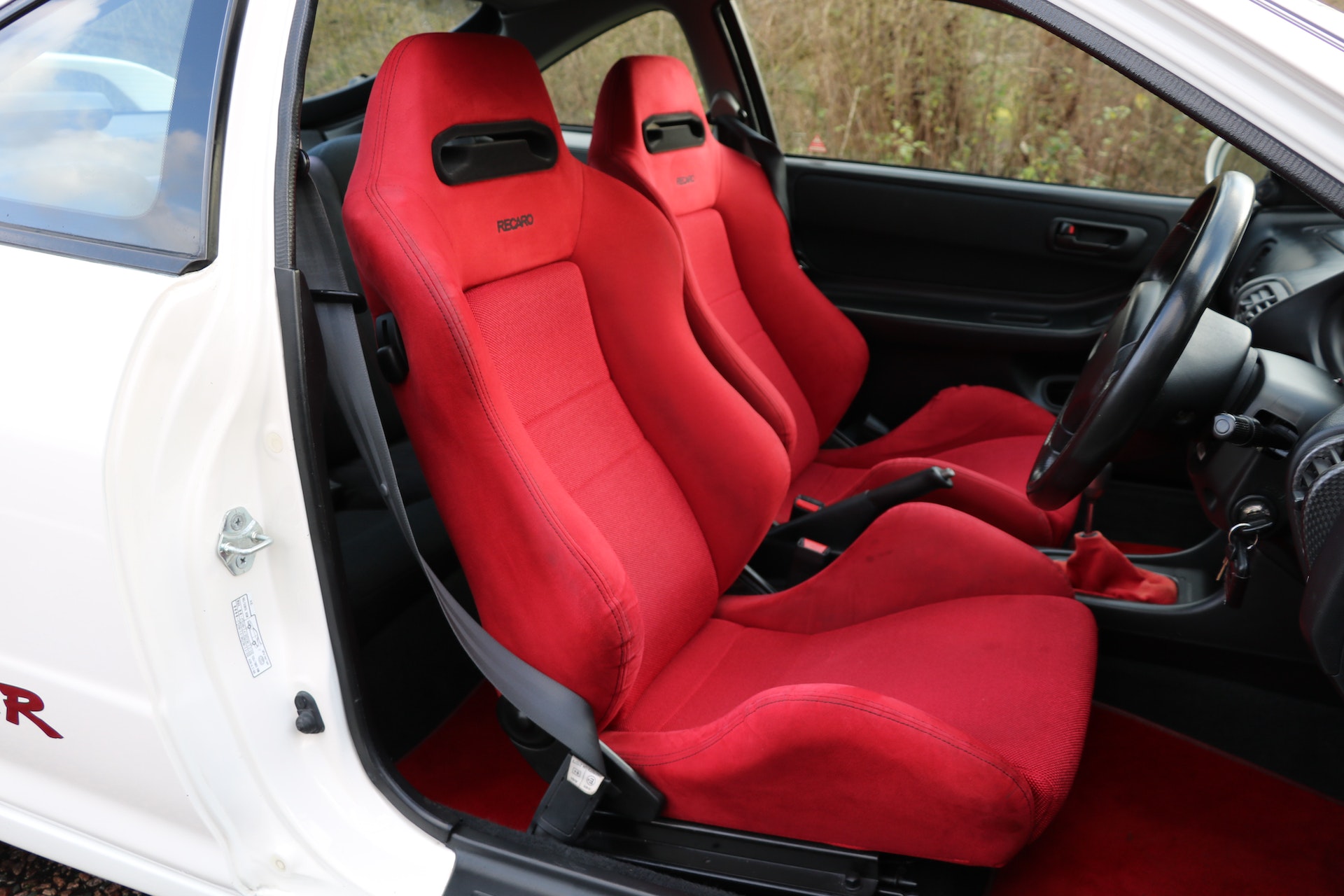 The original headlining remains in great shape, with just a few minor marks near the sun visors. Otherwise, the interior trim presents very well, and all of the switchgear works as it should. At the back of the car, there are a few scuffs on the plastic trim around the boot, but the lining material is in good condition. 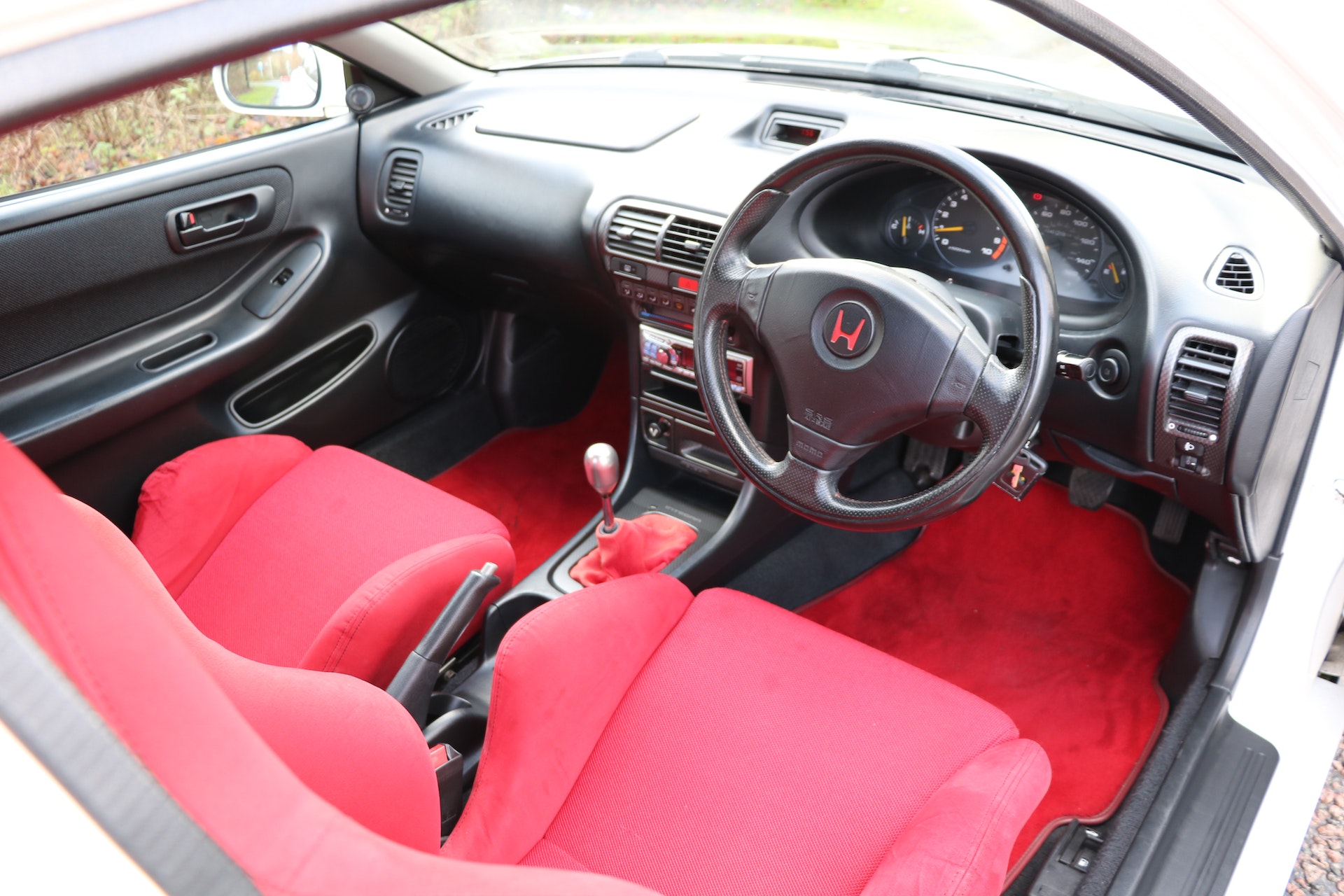 This Honda comes with a substantial service history, and it has evidently been well cared for by previous keepers to ensure it runs and drives smartly today. Its last scheduled maintenance was carried out in April 2019 at 111,391 miles by Honda performance specialist TGM Sport in Hampshire, which comprised renewal of the engine oil and filter, fresh brake fluid, along with a full inspection of the brakes and exhaust system. 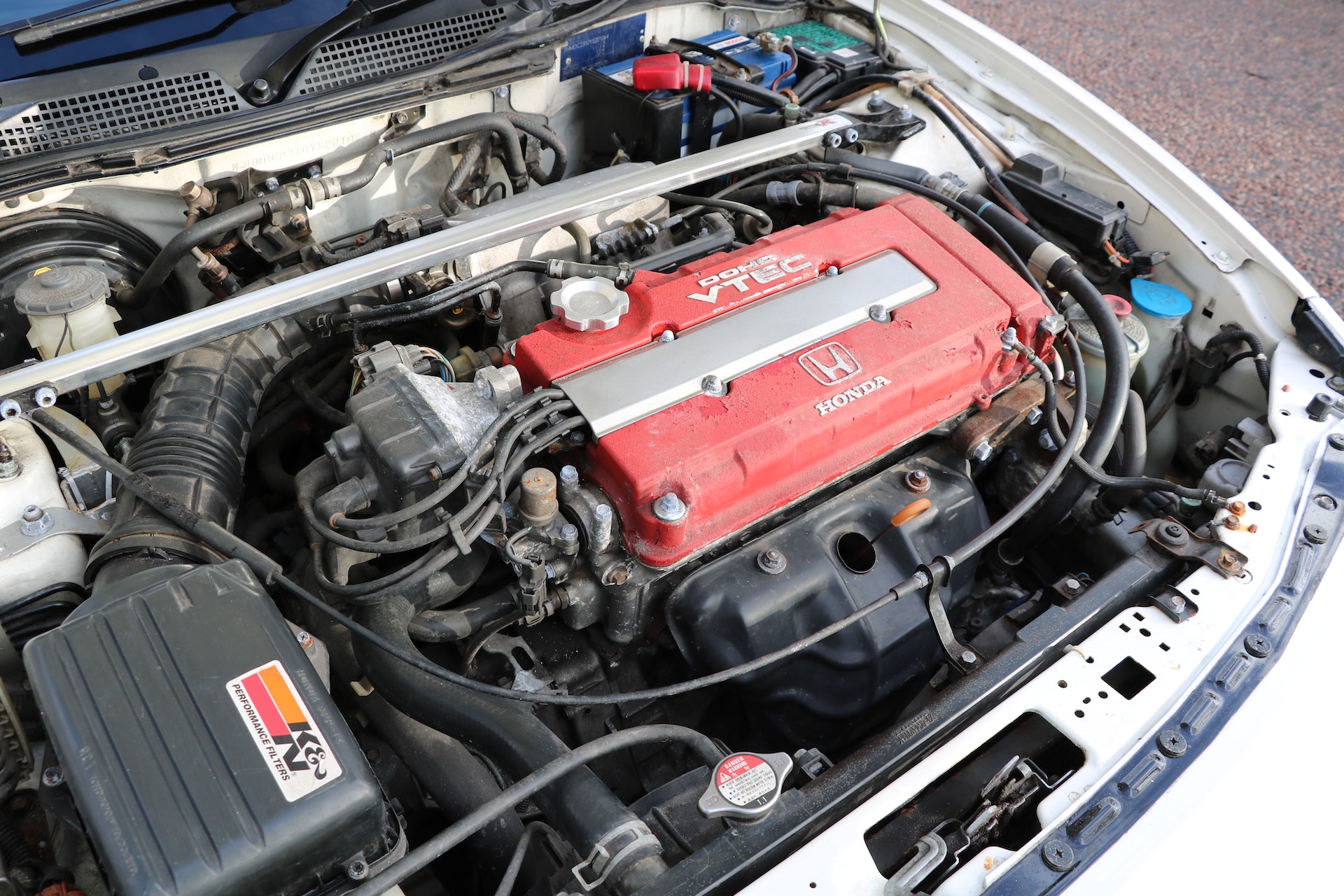 The service before this, in April 2018, included oil and filter changes, as well as a fresh set of spark plugs and new gearbox oil. During 2016, the car had a set of OEM coil springs fitted, and a major service at 102,671 miles was also carried out that incorporated renewal of the cambelt for the second time in the car’s life, as well as the water pump, fan belt and alternator belt. The first cambelt replacement was carried out in 2007 at 72,183 miles. 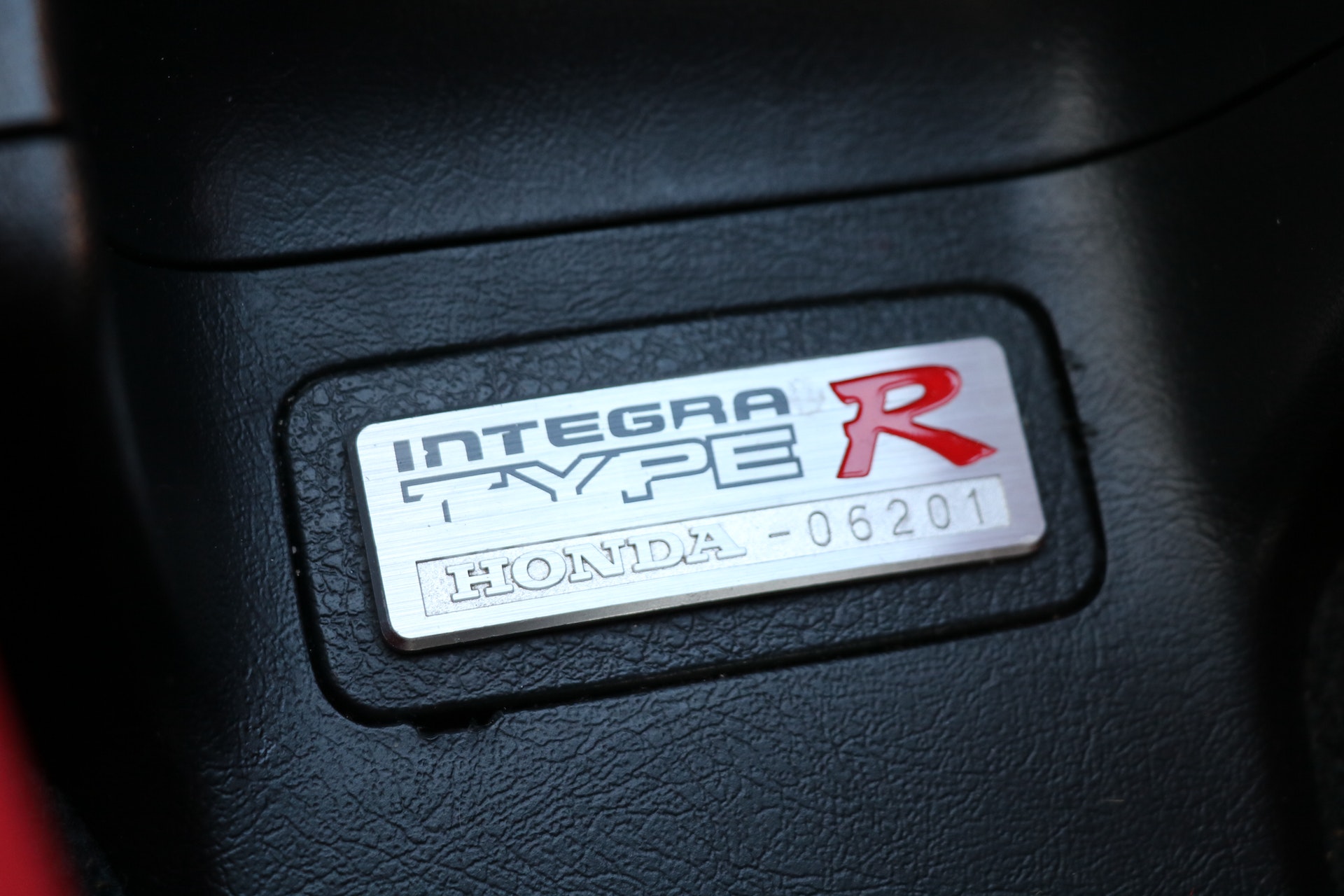 A new clutch was installed in July 2010, and the Type R has covered only around 22,000 miles since then. The valve clearances were checked and adjusted at 96,856 miles. Around 50,000 miles ago, the suspension was rebuilt using genuine Honda and OEM parts. 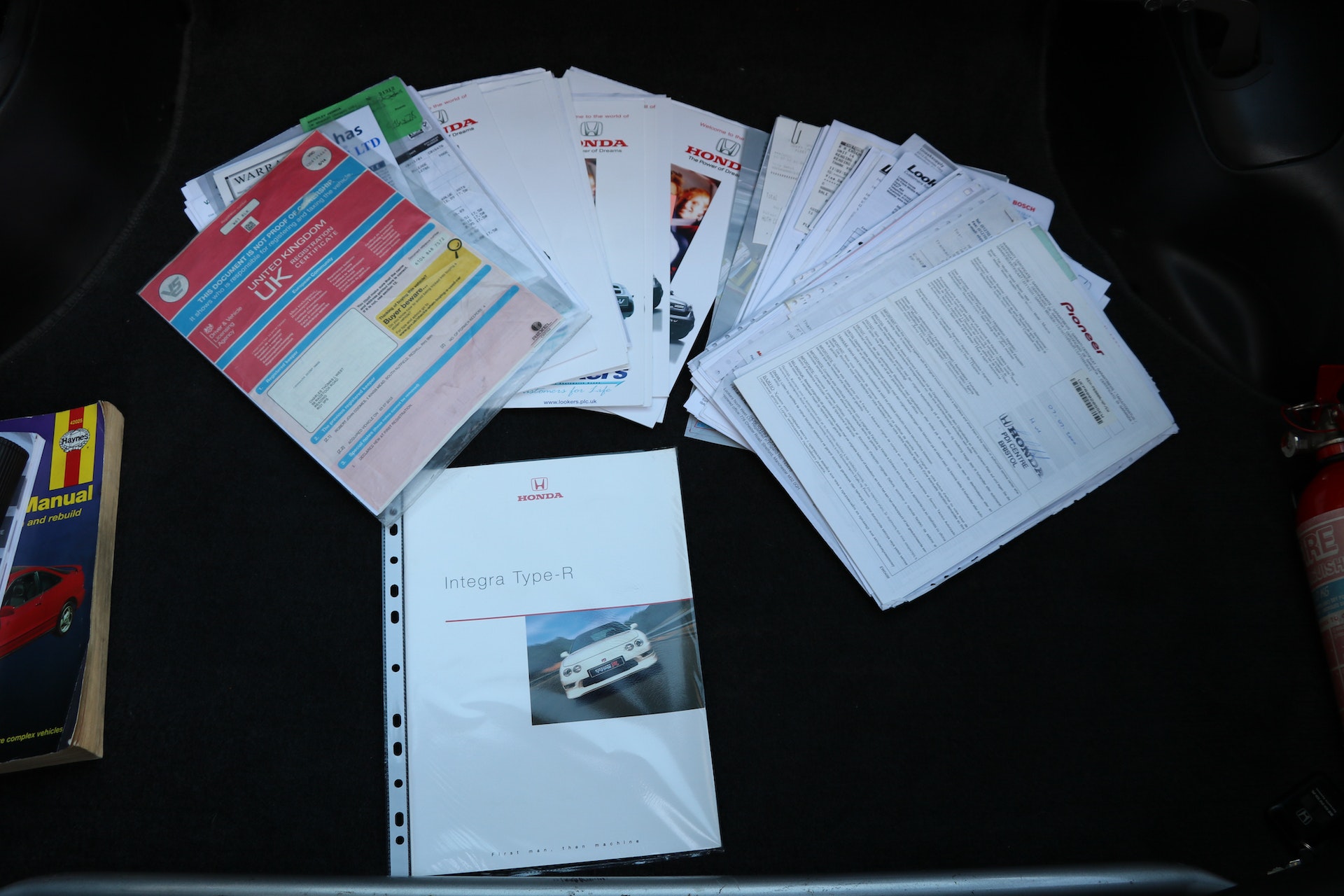 The most recent MOT test was on 25 May 2019 at 112,704 miles, which resulted in a first-time pass with only one advisory about slight wear to the offside front tyre. The alloy wheels are shod in a set of Bridgestone Potenza Adrenalin RE002 tyres in size 195/55 R15 all round, and as the MOT advisory suggests, at least one of the front pair is due for replacement. 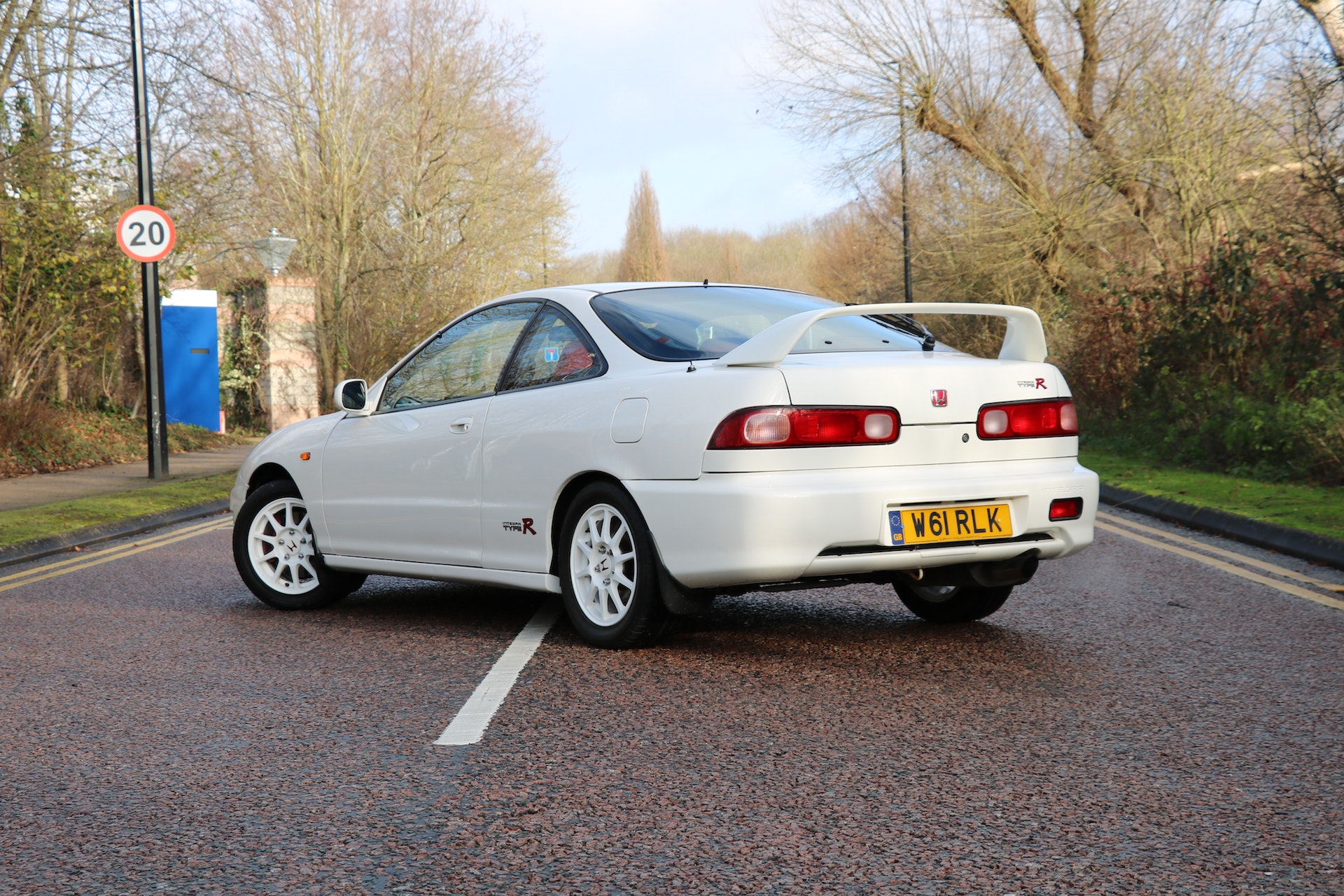 Accompanying the car is all of the original literature, including owner’s handbook, user guides, and the stamped service record. There is also a raft of receipts and invoices documenting work carried out, dating back to when the car was new, as well as a Haynes workshop manual.

Revisiting the Integra Type R for a feature in the Daily Telegraph in 2018, journalist Chris Knapman stated: “It is a car that is impossible to ignore, not because it is in any way annoying, but because it involves you so comprehensively in everything it does.” 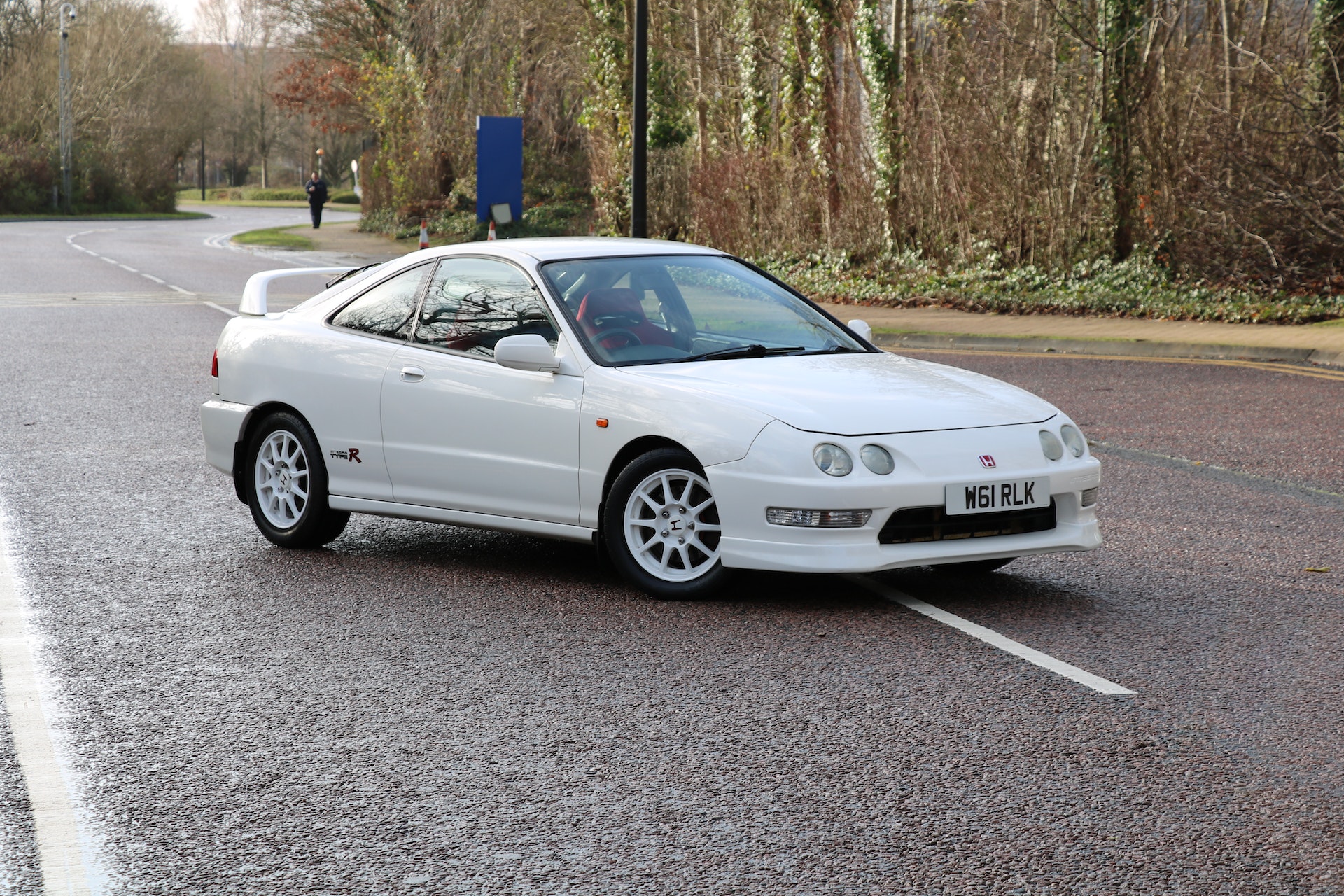 This Honda Integra Type R is a superb example of the breed, and still delivers a wonderfully pure and engaging driving experience. It is in very good condition for its age and mileage, having had remedial work done to the vulnerable body sections when needed, and receiving excellent mechanical care and attention. Finished in the classic Championship White colour with the eye-popping red Type R seats, this is a highly desirable and unmolested example of a performance icon.