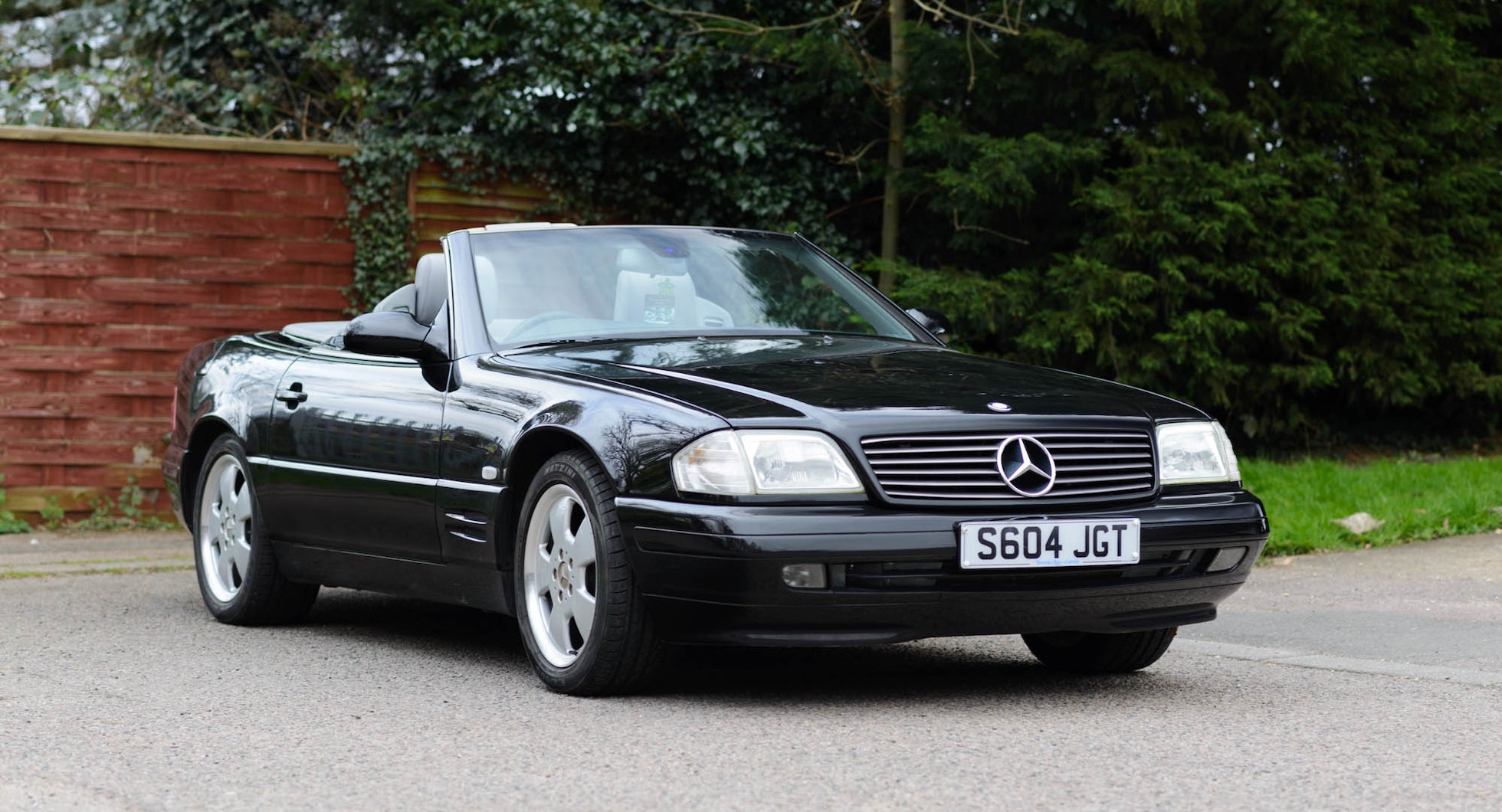 This Mercedes-Benz SL280 is a great example of a popular modern classic, with genuine low mileage, and a desirable factory specification. It is powered by the 201bhp 2.8-litre M112 V6 petrol engine, with rear-wheel drive via a five-speed automatic transmission. The digital odometer records just 40,926 miles from new. 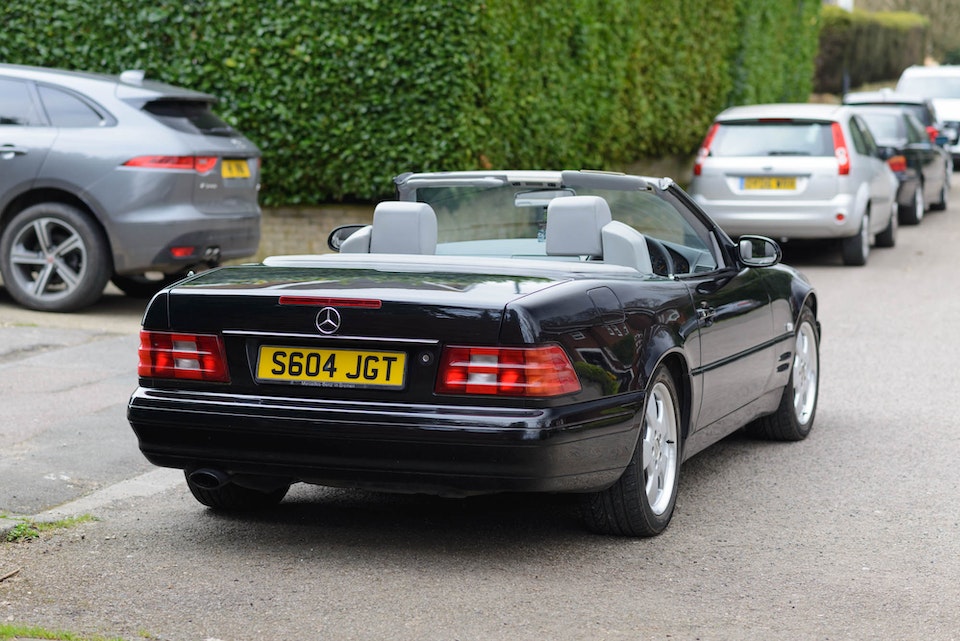 In the late 1990s, Mercedes-Benz was known to have offered its customers two options to take delivery of a new car: the first was to have it transported to the local dealer, while the second was to collect it directly from the factory. It is understood that the first owner of this car opted for the latter, hence the ‘overseas use’ notation on the V5C log book, as well as the rear number plate surround from Mercedes-Benz in Bremen - which is where the R129 SL model was built. 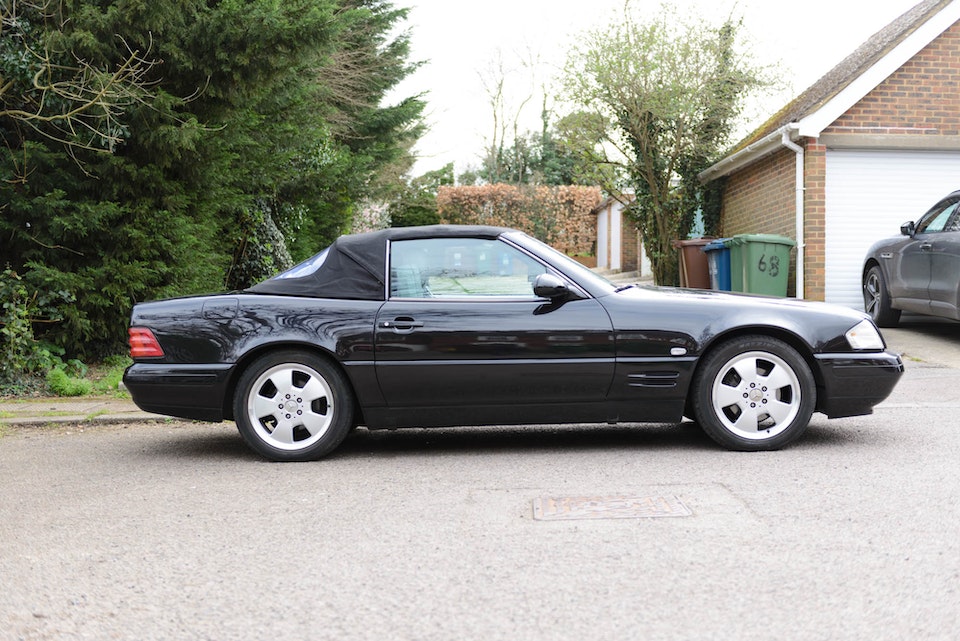 This SL280 was first registered in the UK on 2 March 1999, and its earlier running-in use on the continent meant that it was given an ‘S’ plate rather than the new ‘T’ mark. There is just one previous registered keeper on the V5C log book, and the current owner purchased it 17 years ago. Since then, he has enjoyed some 16,000 miles behind the wheel. 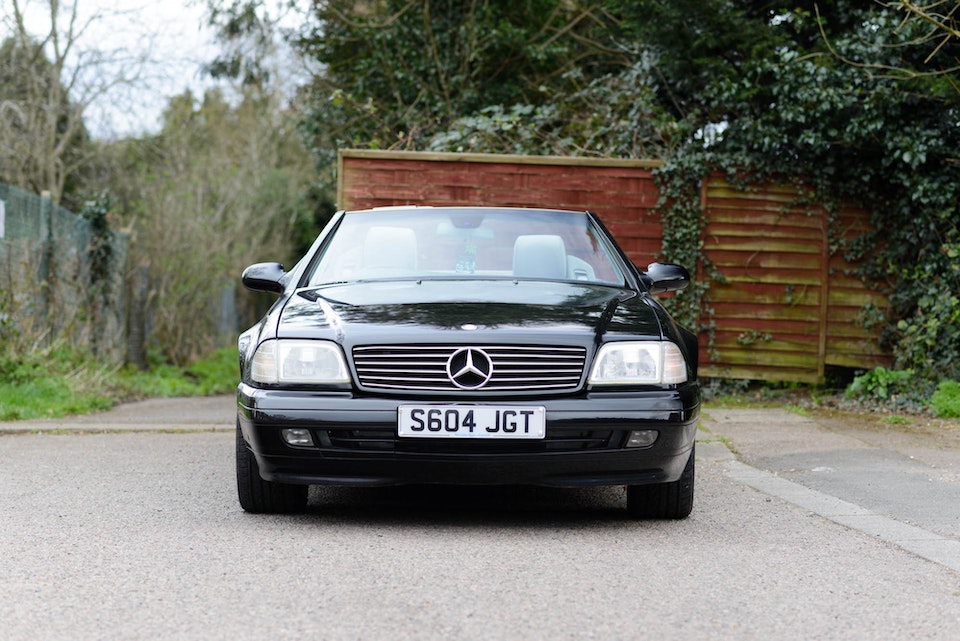 Its bodywork presents in very good condition, with no panel damage or signs of corrosion. The Obsidian Black paint has been refreshed in a few places in the past to eradicate minor blemishes such as stone chips, and the finish still presents well. The nearside door handle has evidently been replaced, but has not yet been repainted in matching black. The light lenses all appear to be original, and there is just one hairline crack visible in the offside tail light casing. 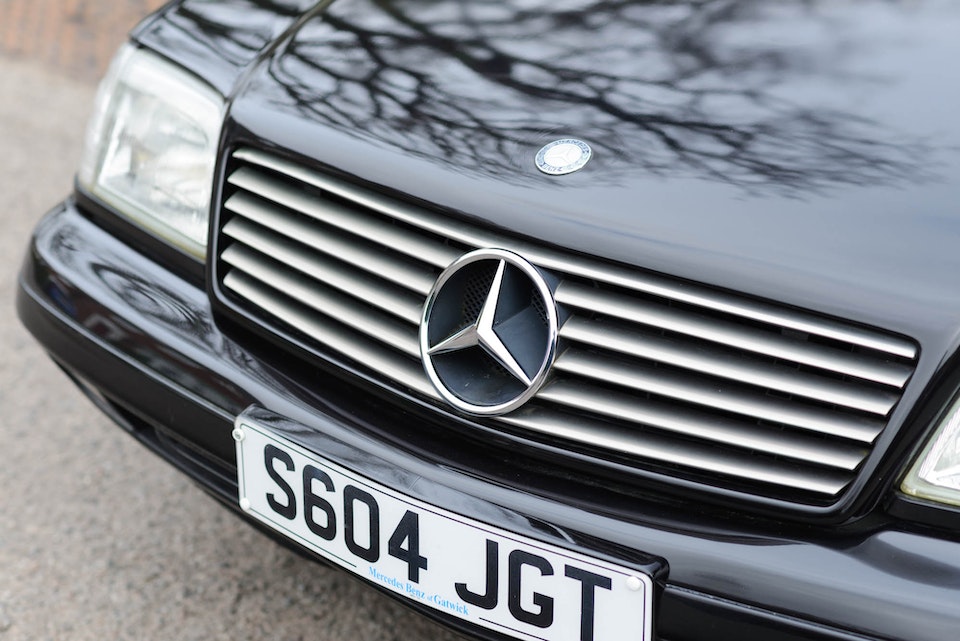 The car’s soft-top is fashioned in black fabric, and while there is some surface corrosion on the inner folding frame, the mechanism itself works perfectly. Some water marks are present on the outside from where the roof has previously been stored while still damp, but the headlining on the underneath is sound. 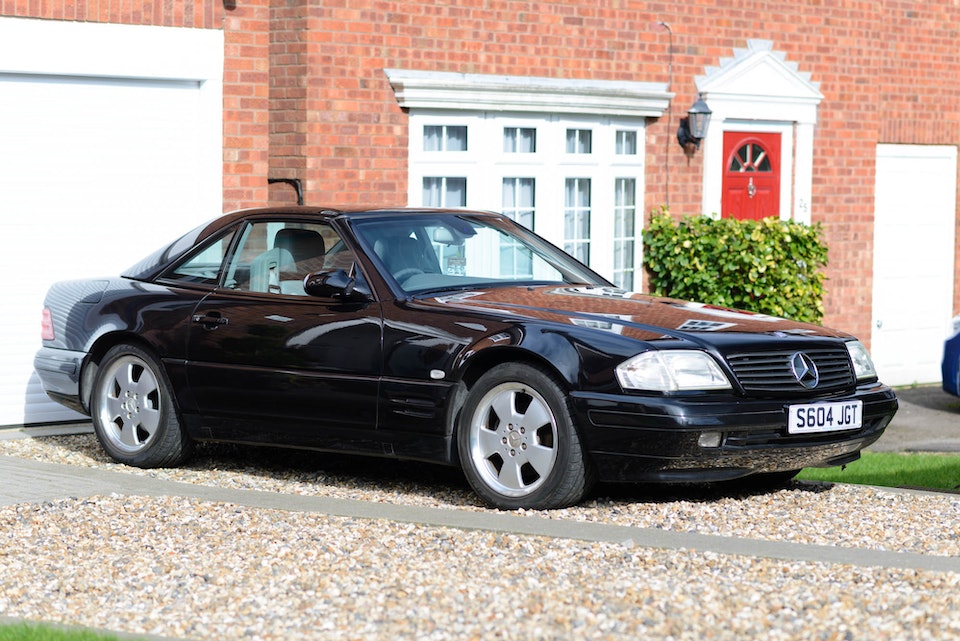 While the paintwork and body trims are in good order, the whole car would benefit from a thorough detailing treatment, to bring the cosmetic appearance up to a very high standard. The insulating liner under the bonnet, which is a common wear item on the R129, has just been replaced by the seller. The car sits on the original 17-inch five-spoke ‘Hollander’ alloys, which are in great shape, with only a small kerbing scuff on the nearside rear wheel. 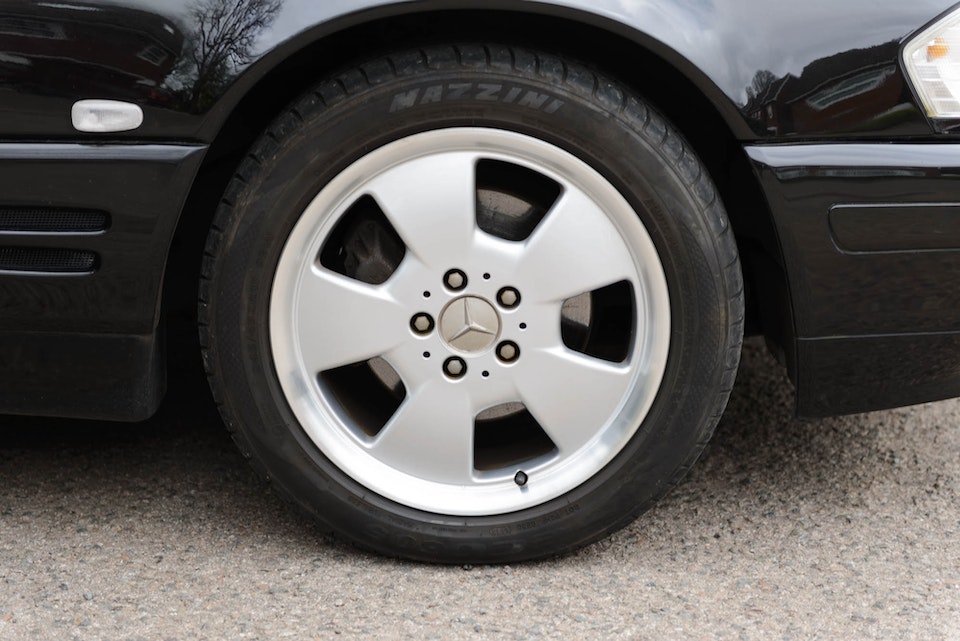 The interior of this SL is trimmed in full Grey Nappa leather, which remains in good condition with no rips or tears to the upholstery. There are signs of wear in line with the age and mileage, and some discolouration of the leather on both door handles and the steering wheel. The front seats feature electric adjustment and heating, while the rear seats seem to have had very little use. 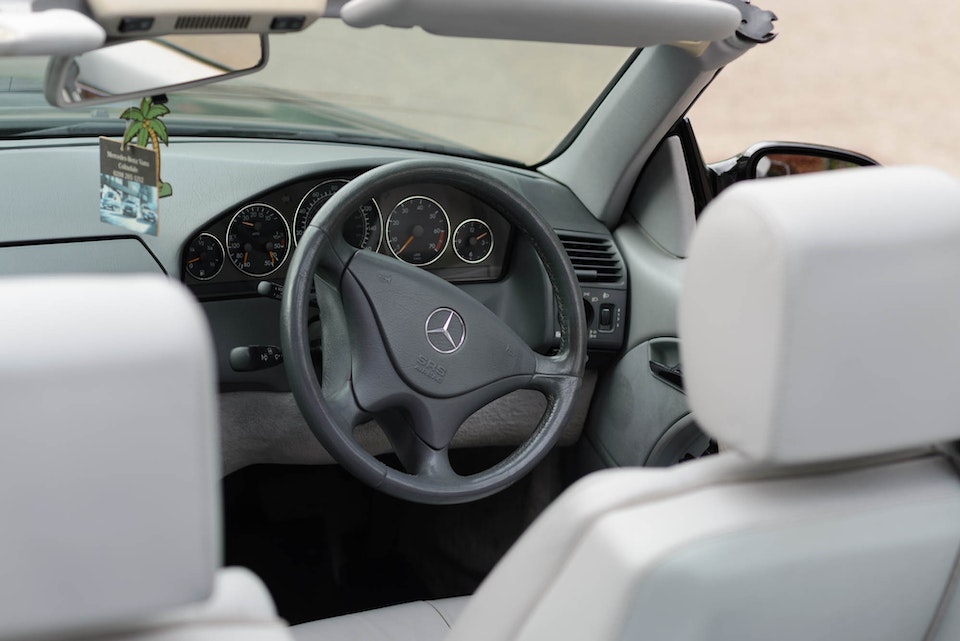 Walnut root burl trims provide an elegant touch to the cabin along the centre console and door cards, and other factory-fitted items include air-conditioning, and the Mercedes-Benz radio cassette deck with an Alpine CD changer. At the back of the car, the boot lining is in very good order, even retaining the matching storage cover for the flip-up wind deflector. The space-saver spare wheel and jack are also present. 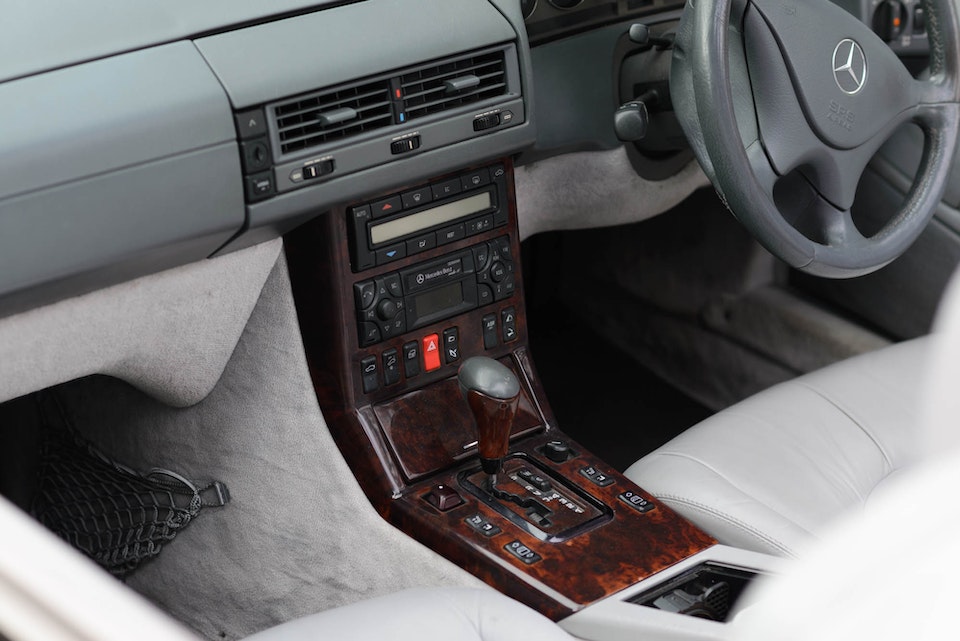 Its last scheduled maintenance was in November 2018 at 40,226 miles, which consisted of a full annual service. The seller reports that it also had workshop visits in June 2017 and September 2016. A major service carried out in August 2015 at 39,312 miles included renewal of the engine oil and filter, brake fluid, spark plugs, coolant, fuel filter and air filter. 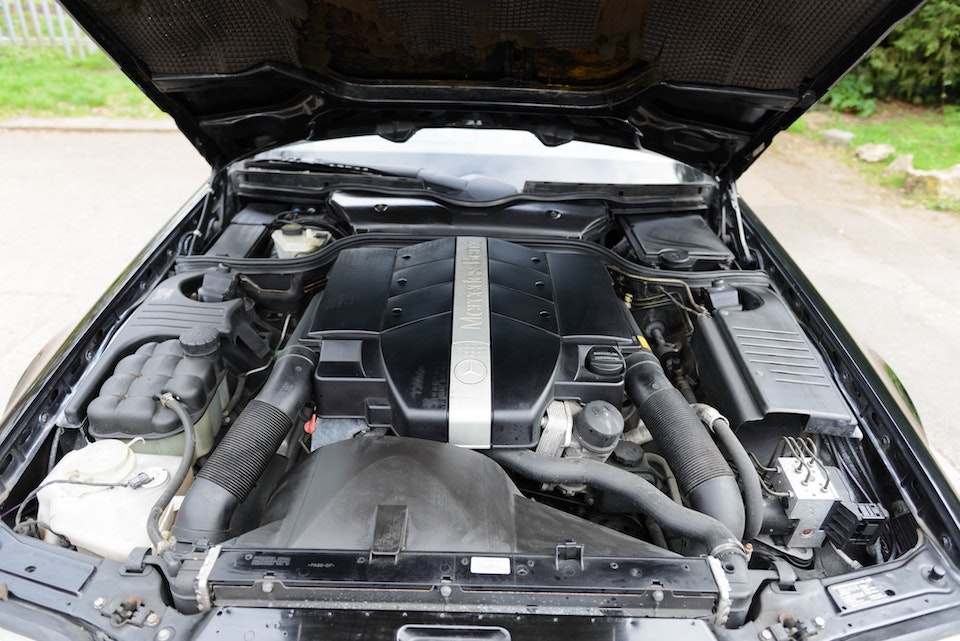 The most recent MOT test was on 28 August 2019 at 40,787 miles, which resulted in a first-time pass with the only notes being a deteriorated ball-joint dust cover on the nearside front suspension arm, and a non-excessive oil leak. Since the car has been used far more sparingly in recent years, the wheels are fitted with a set of budget tyres in size 245/45 ZR17 all round, which remain in good condition with plenty of tread remaining. 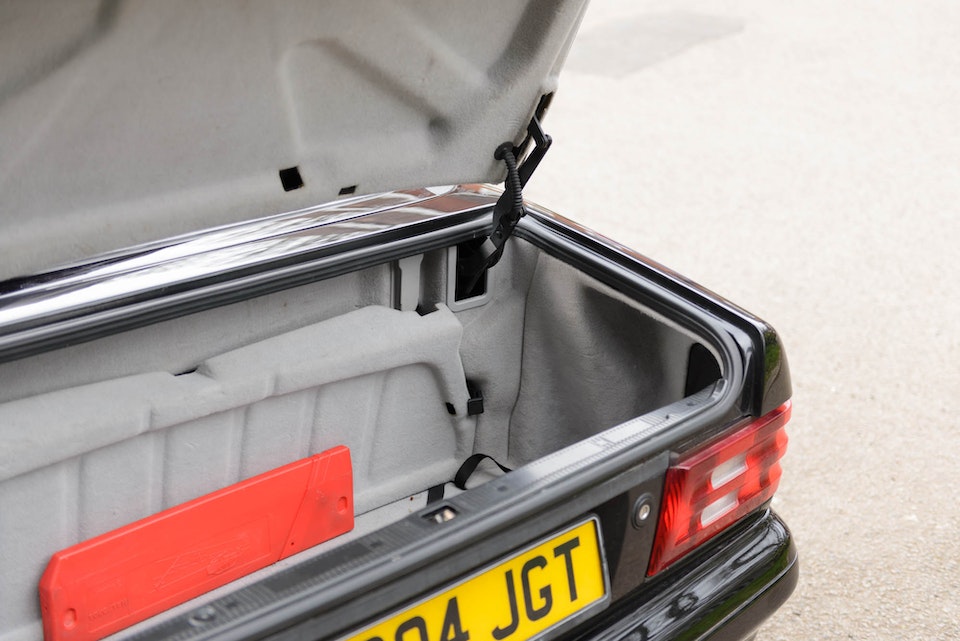 Accompanying this Mercedes-Benz is a complete and original book pack, including the stamped maintenance record, along with numerous old invoices and receipts. 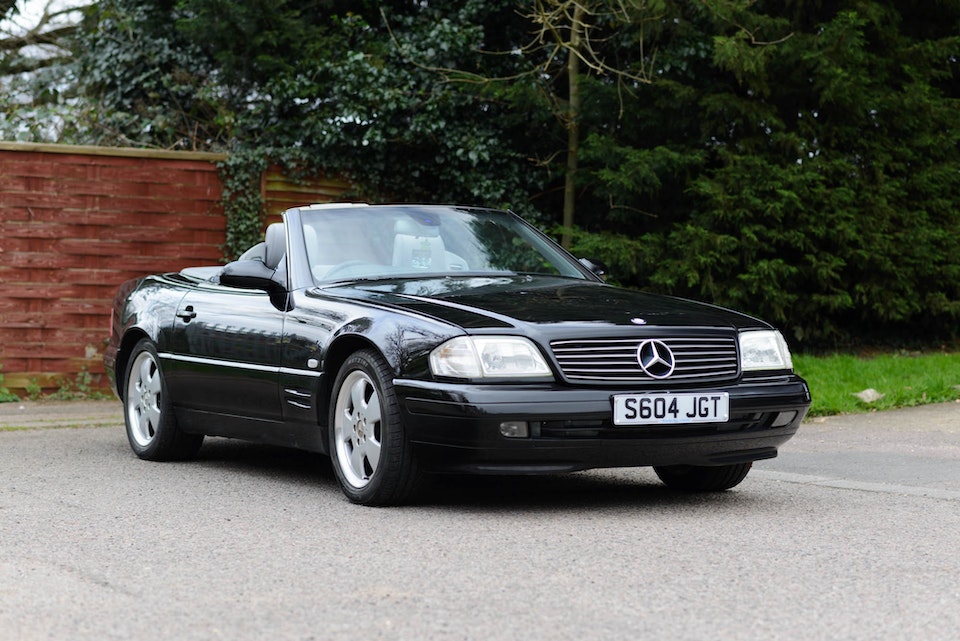 This Mercedes-Benz SL280 is a stylish modern classic, which would now benefit from some minor cosmetic attention to the interior by its next owner. This era of SL is renowned for its refinement, comfort and practicality, not to mention an impressive reliability record. For anyone seeking a low-mileage example of this desirable cruiser, this is an opportunity not to be missed.