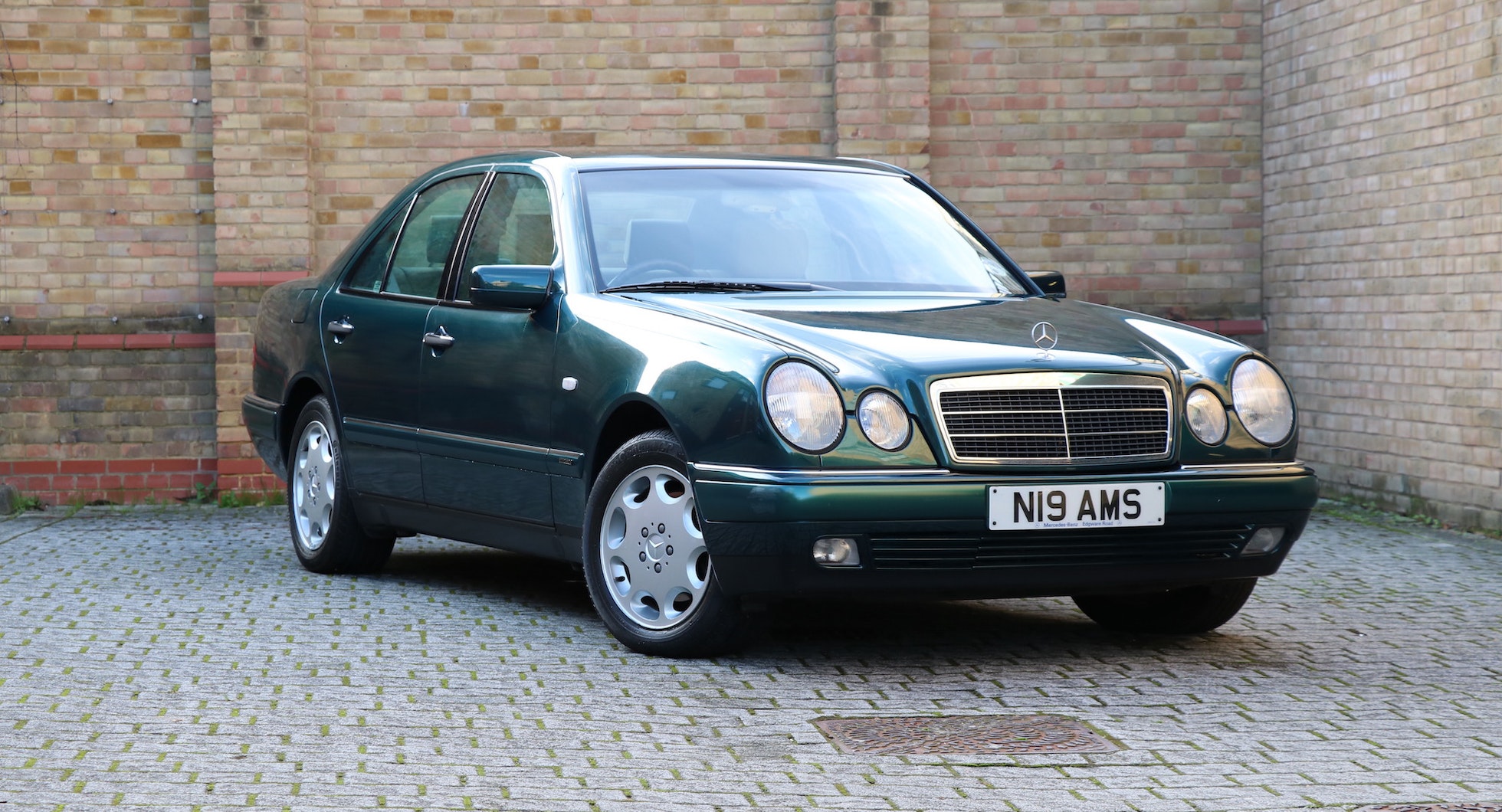 This 1996 Mercedes-Benz E320 is a time-warp example of the W210 series E-Class model, with just one previous owner and a superb factory specification. It is powered by a 3.2-litre straight-six petrol engine, coupled to the five-speed (Type 722.5) automatic transmission. The odometer shows a mere 3,032 miles from new, which is fully evidenced by the car’s history. 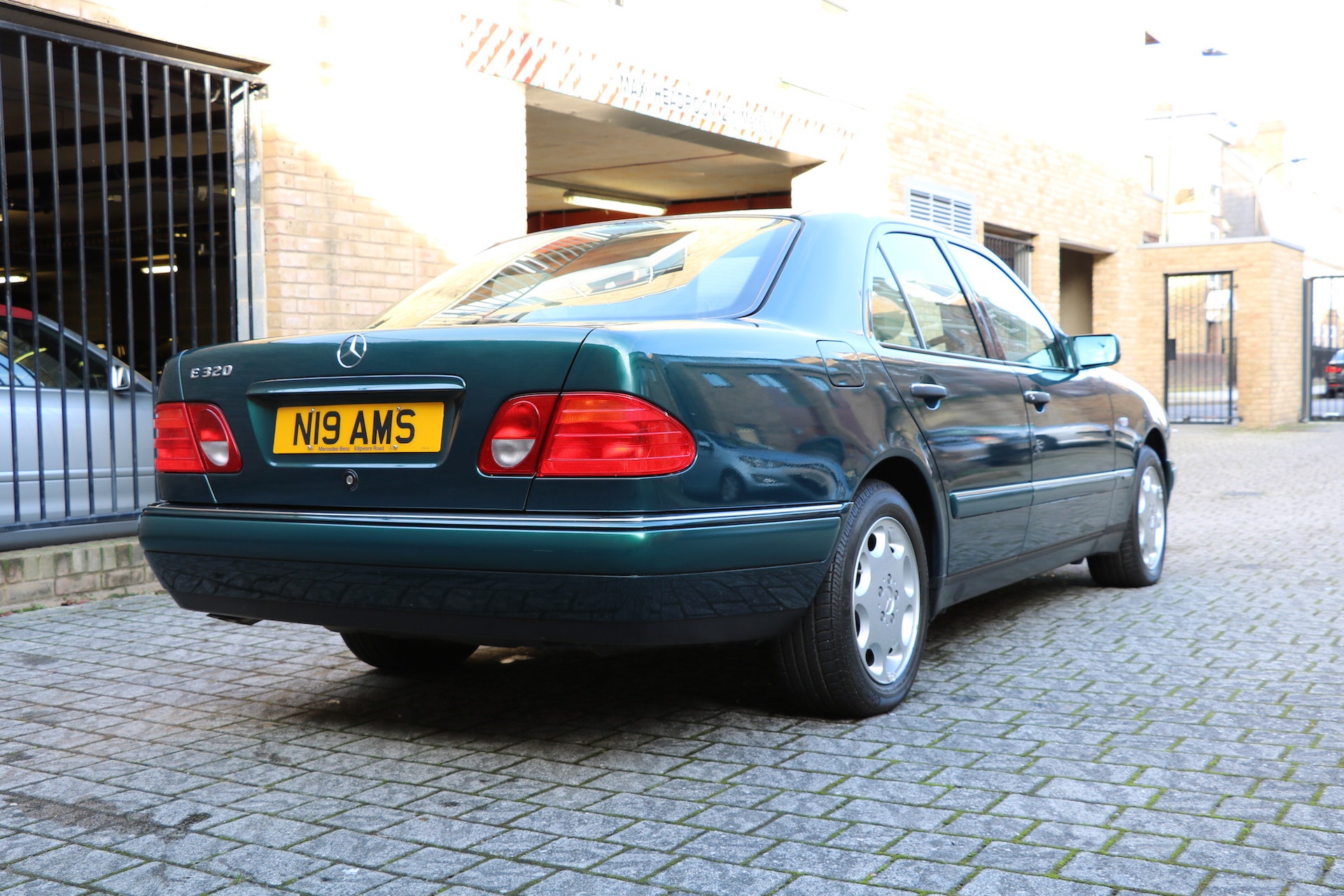 An original UK example delivered in mid-1996, this car was supplied new via Mercedes-Benz Edgware Road - and still retains its first registration plates. The first owner was a veteran banker from the Middle East who later became the governor of the Dubai International Financial Centre and an adviser to the second Prime Minister of the United Arab Emirates. With a number of other cars at his disposal, this Mercedes-Benz was used sparingly when he was in London. 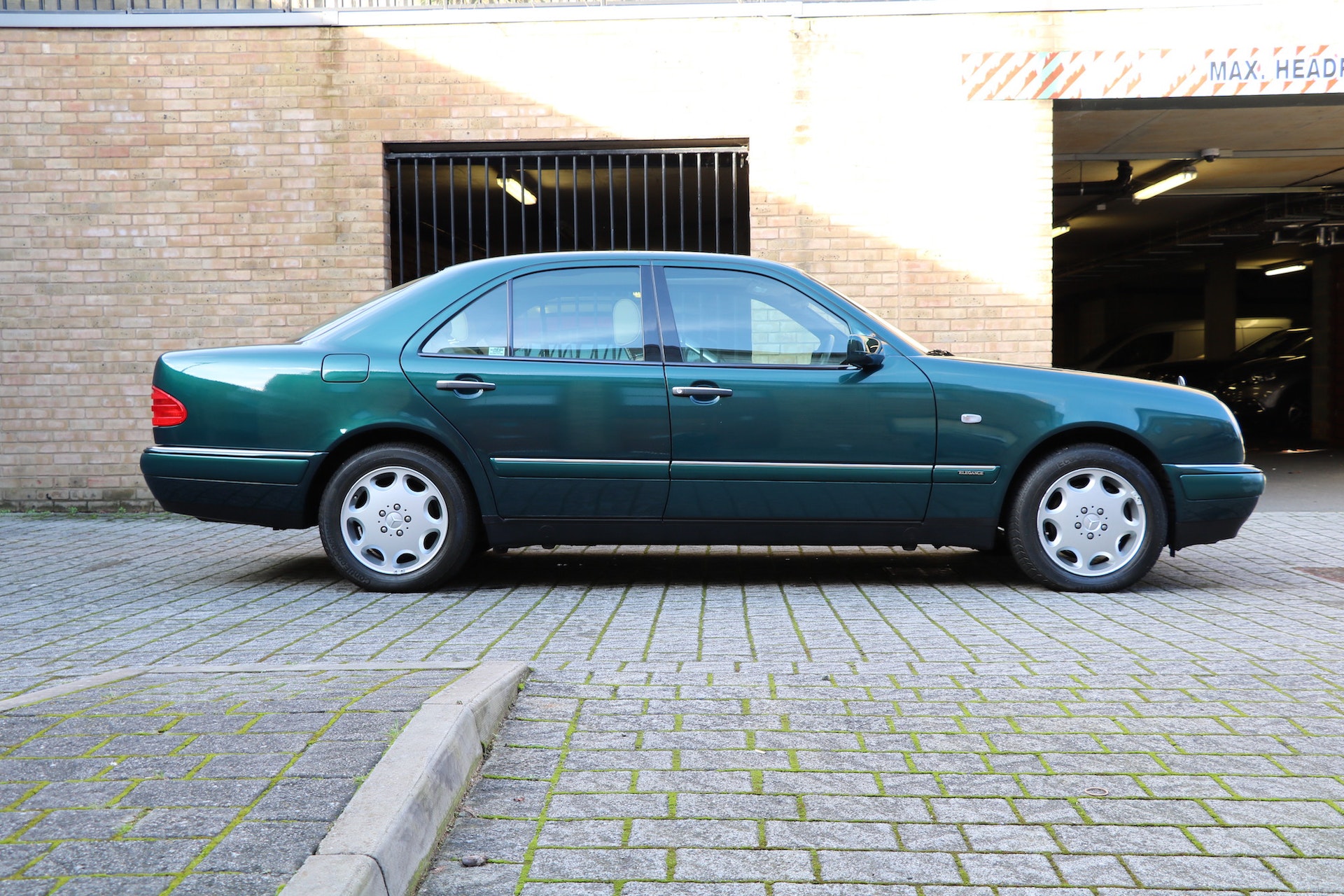 Having last made use of the car in 2015, the first owner stored the car for the next few years, and passed away in 2018 after a short period of illness. The current owner acquired the car directly from the gentleman’s widow last year. The Mercedes-Benz had always been stored in a secure, dry garage, but had remained untouched for around four years. It was subsequently given a basic service, and is now in excellent running order. 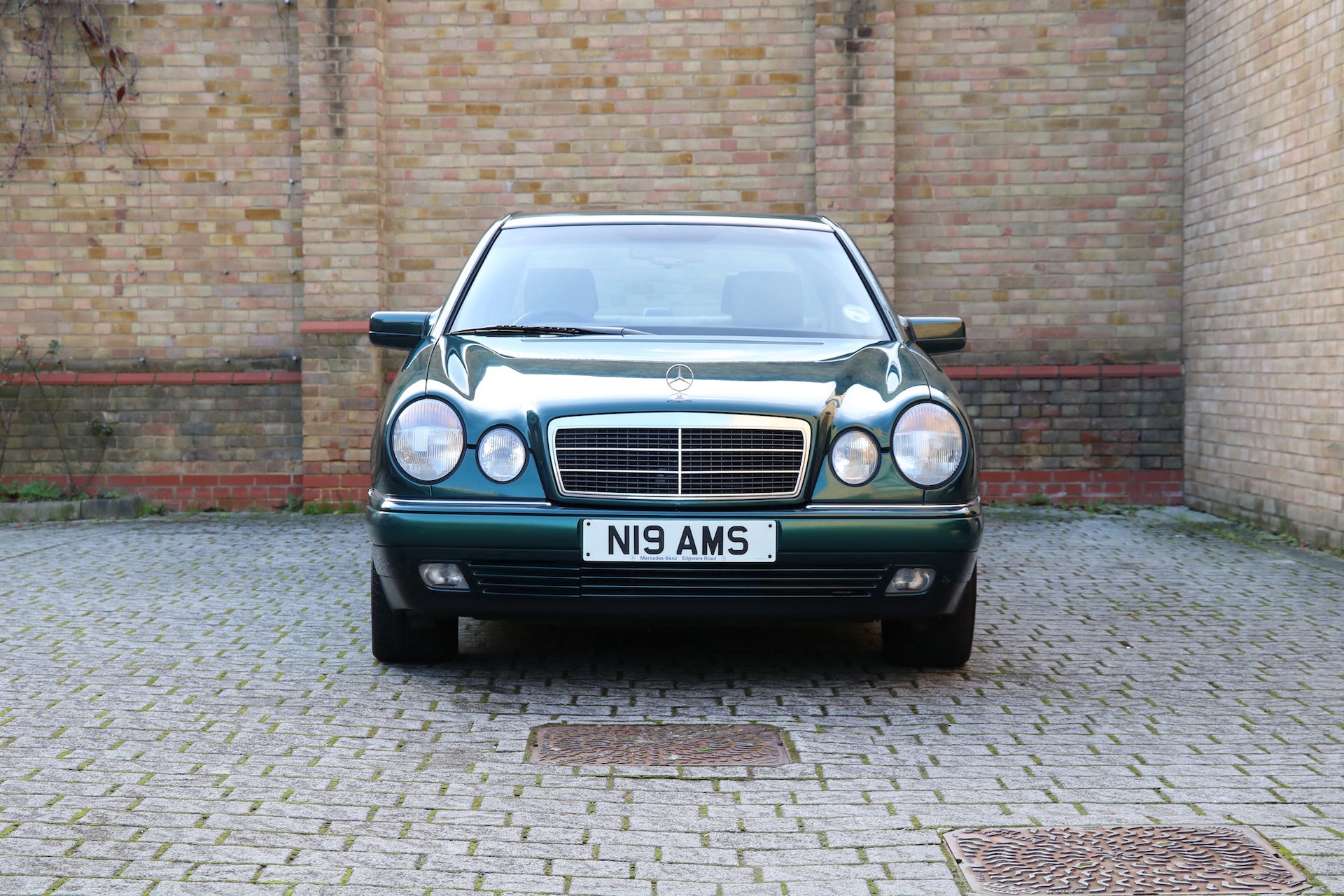 The bodywork of this car is in absolutely superb condition, and as you might expect given such low mileage, it presents almost like a brand-new vehicle. The only notes from the vendor are that there are a few small chips and scuffs on the front bumper, but otherwise the Tourmaline Green paint still looks smooth and glossy all around the body. 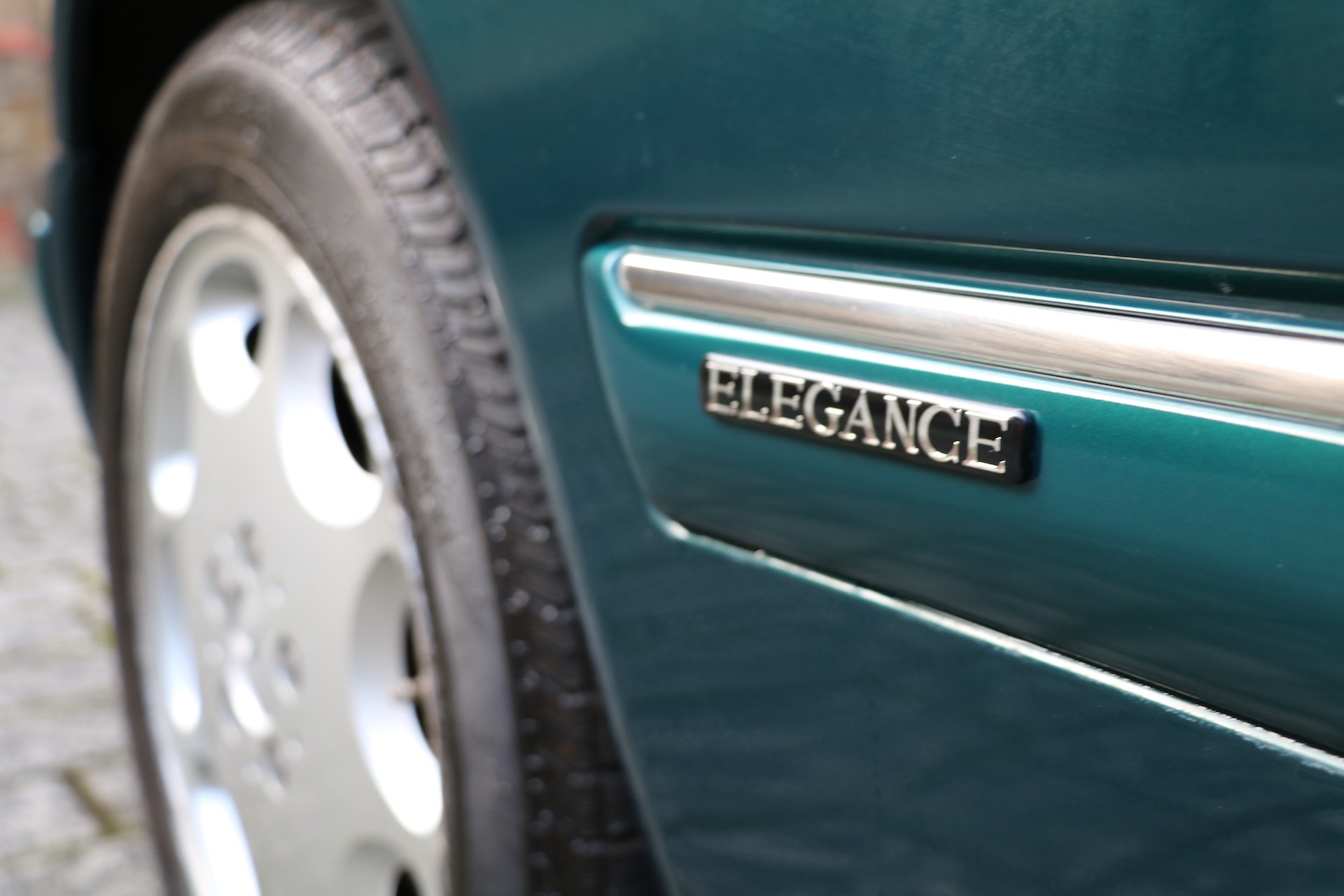 It sits on the original set of 16-inch eight-hole light alloy wheels. There are kerbing scuffs to the very outer edges of the rims, but they are otherwise very presentable, and all of the wheel bolts are in excellent order. 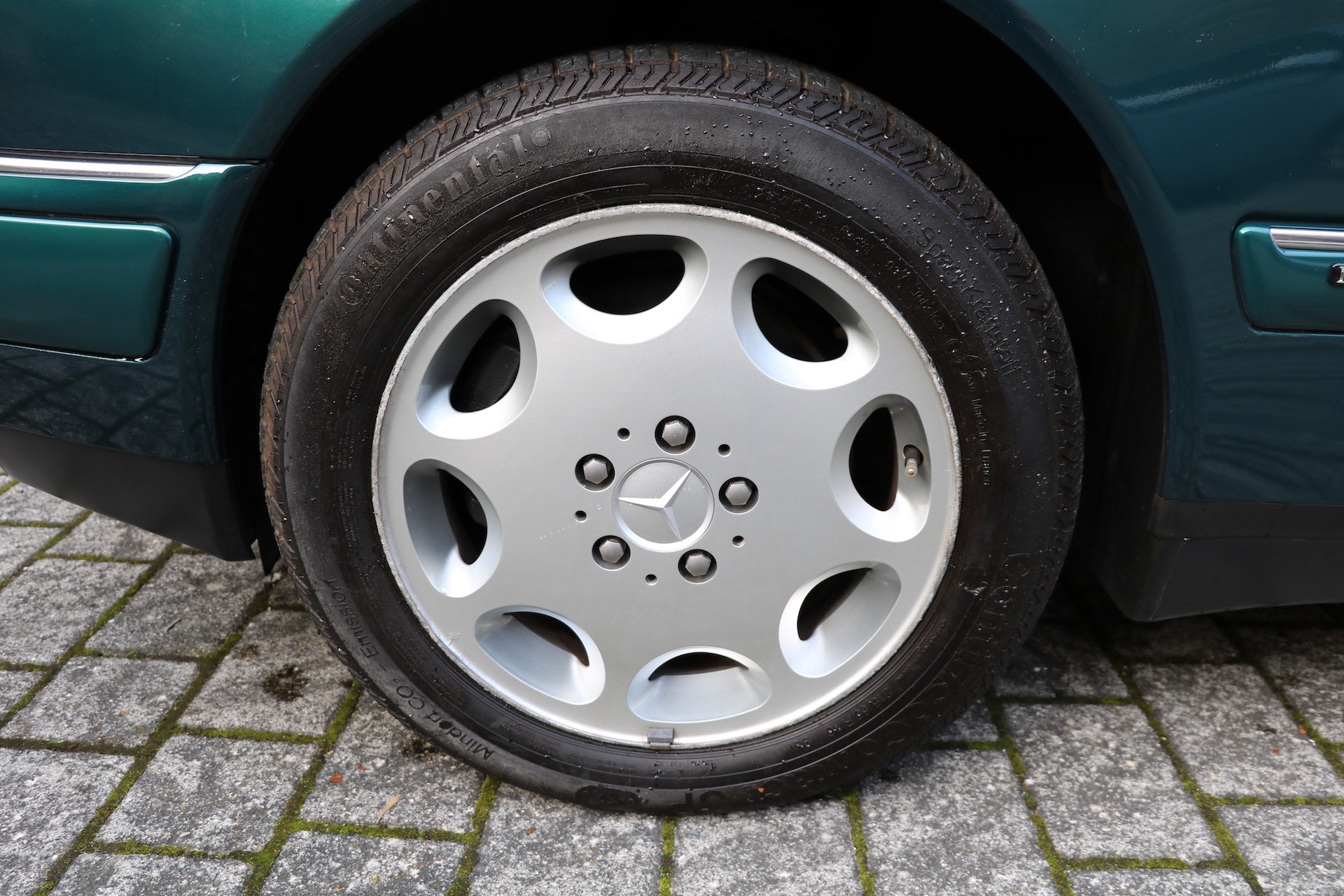 In the cabin, the Mushroom beige leather upholstery is in pristine condition, with no damage. Likewise, the door cards, headlining and plastic trims are all pristine, and the switchgear and buttons are like new, with no wear or scratches from use. The only blemish noted is a stain on the carpet over the transmission tunnel between the rear seats. 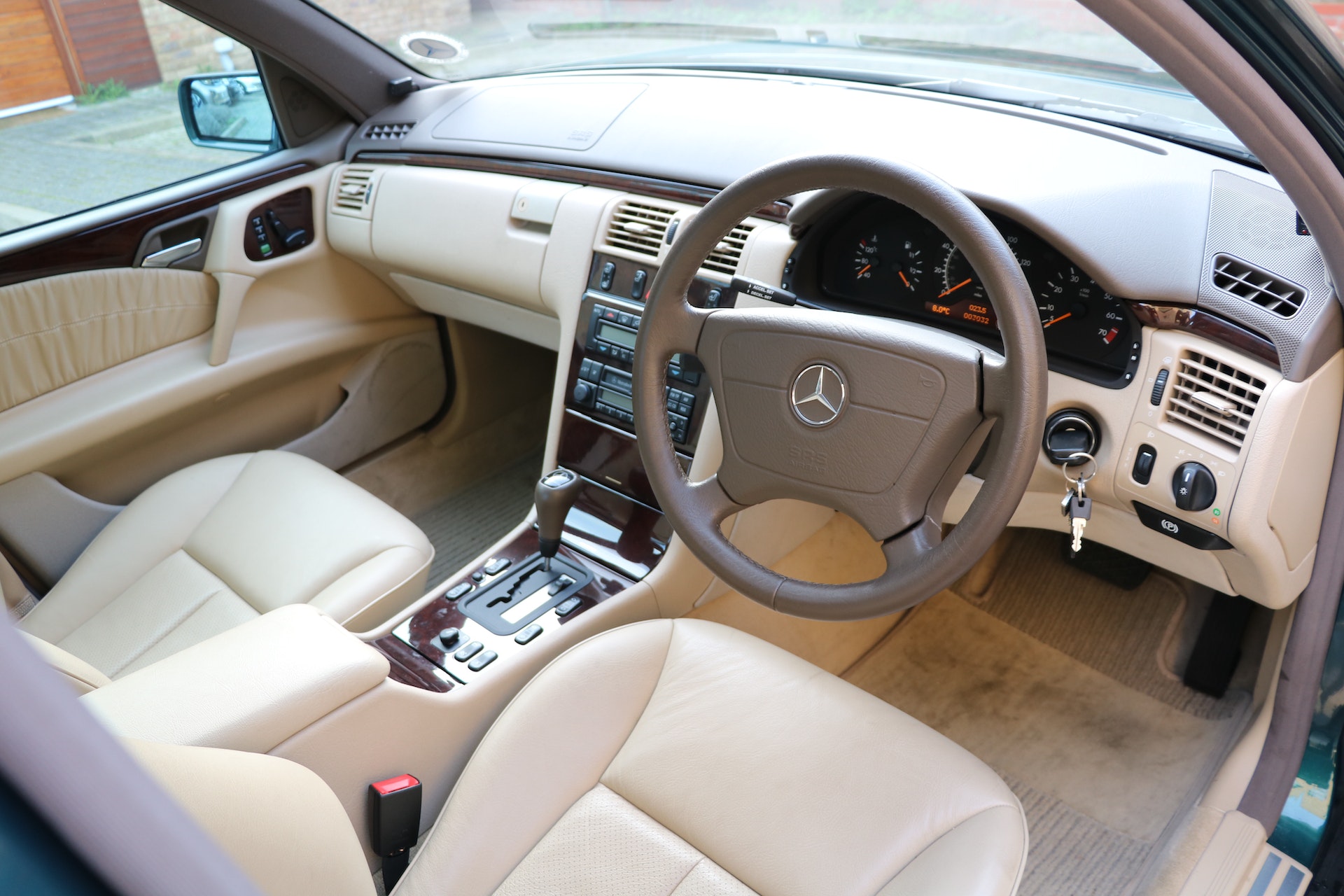 Electrically adjustable and heated front seats have memory settings for both driver and passenger, and the cabin is also equipped with automatic climate control. Other features include an electric sunblind for the rear window, a tilt-and-slide glass sunroof, and a Mercedes-Benz radio cassette stereo system with CD changer and Bose speakers. The car was also specified with Mercedes-Benz’s optional speed-sensitive ‘Parameter Steering’, which makes low-speed manoeuvres much easier. 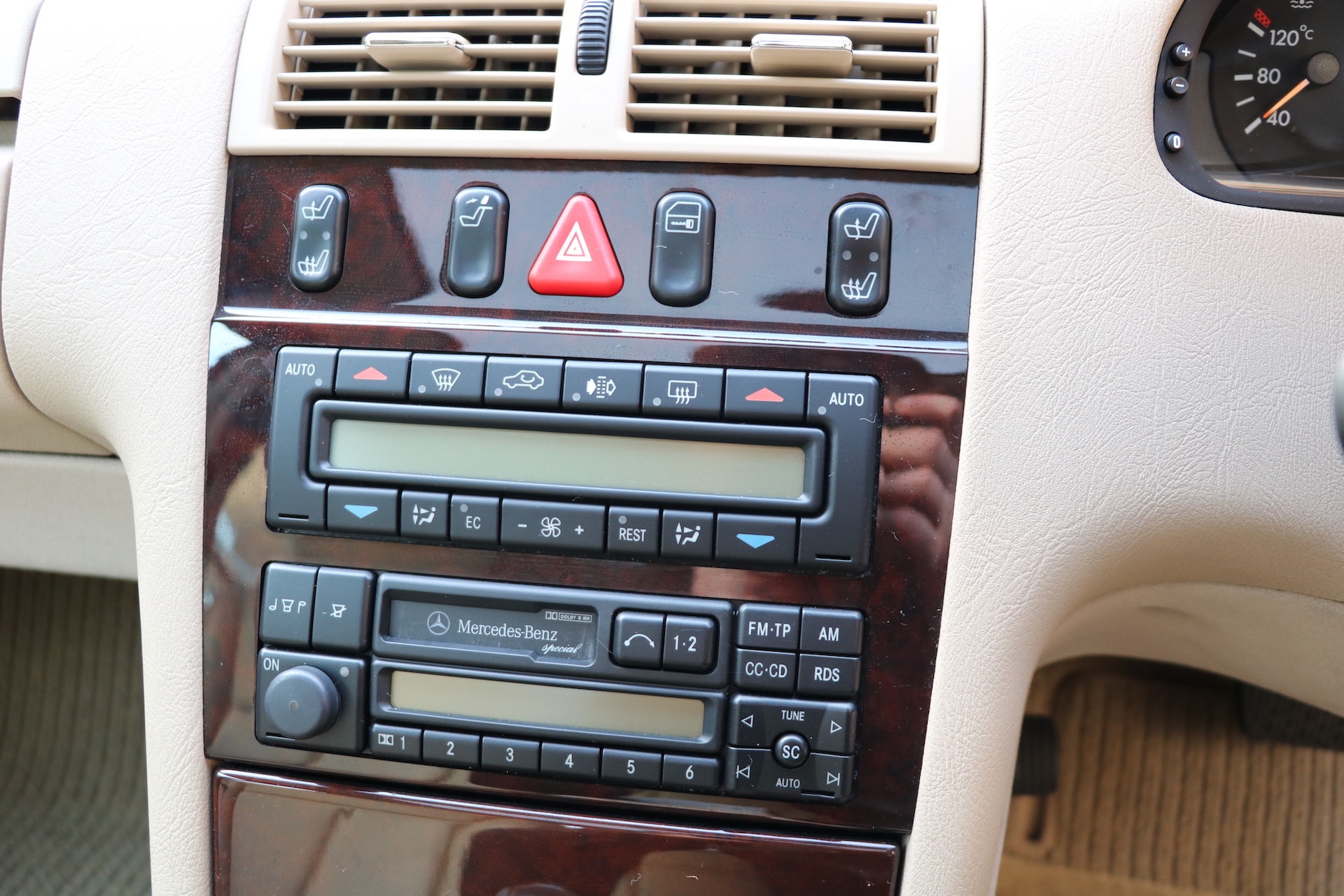 After the car’s initial Pre-Delivery Inspection at Mercedes-Benz in 1996, it is assumed that it was given routine maintenance to keep it in good running order, though there is unfortunately no documentation to prove this. However, within the last six months, the vendor has changed out the oil filter and fuel filter, and has renewed the engine oil, and the reports that the car is in excellent mechanical condition. 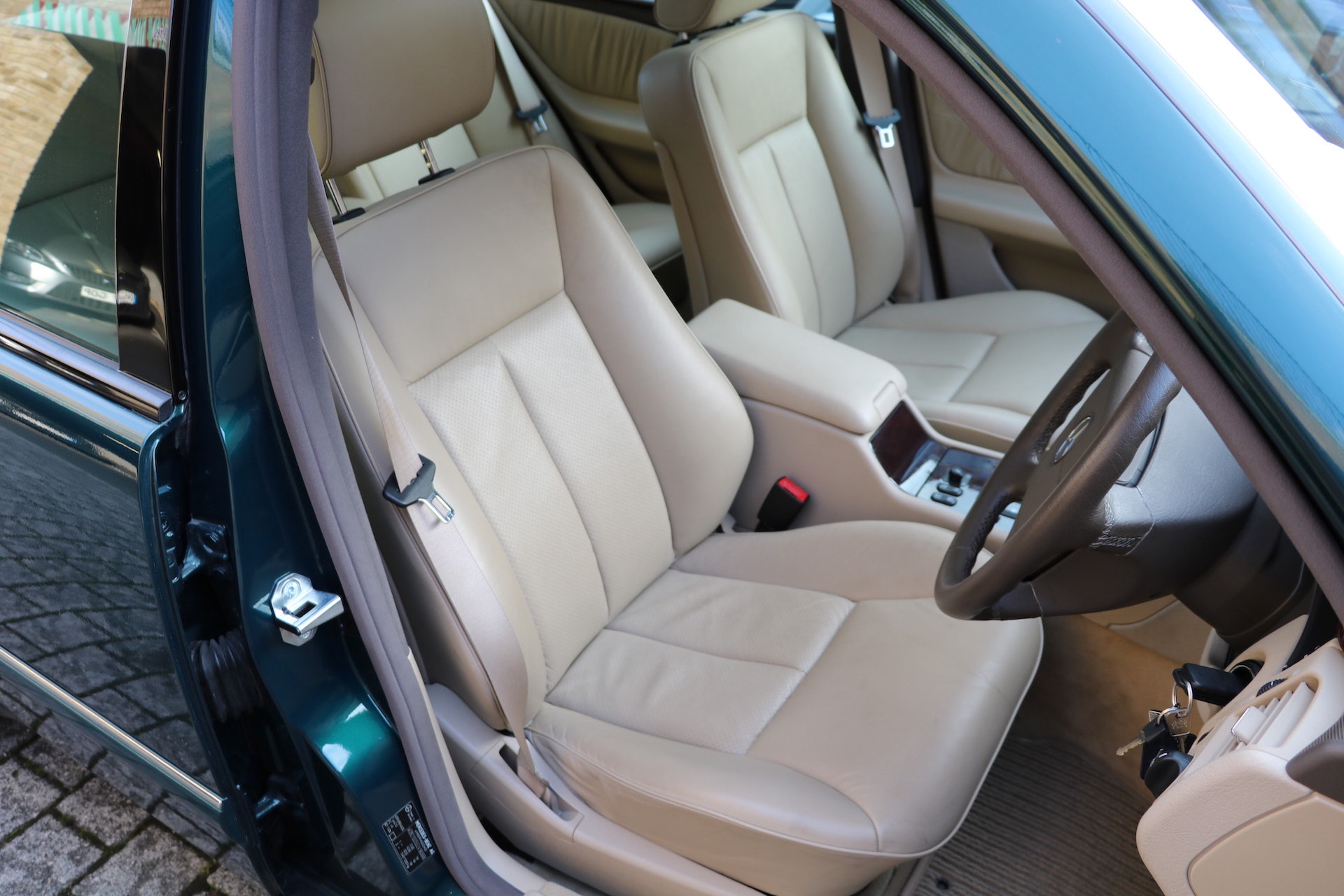 Having been off the road for some time, its last MOT test was on 13 January 2015 at 3,029 miles, which resulted in a clean pass with no advisories. On the online MOT history for the car, which shows its record from 2006 until present, it has never failed a test nor had a single advisory. The vendor believes there is no reason why it would not pass an MOT first-time again now, should the next owner wish to take it onto the road. 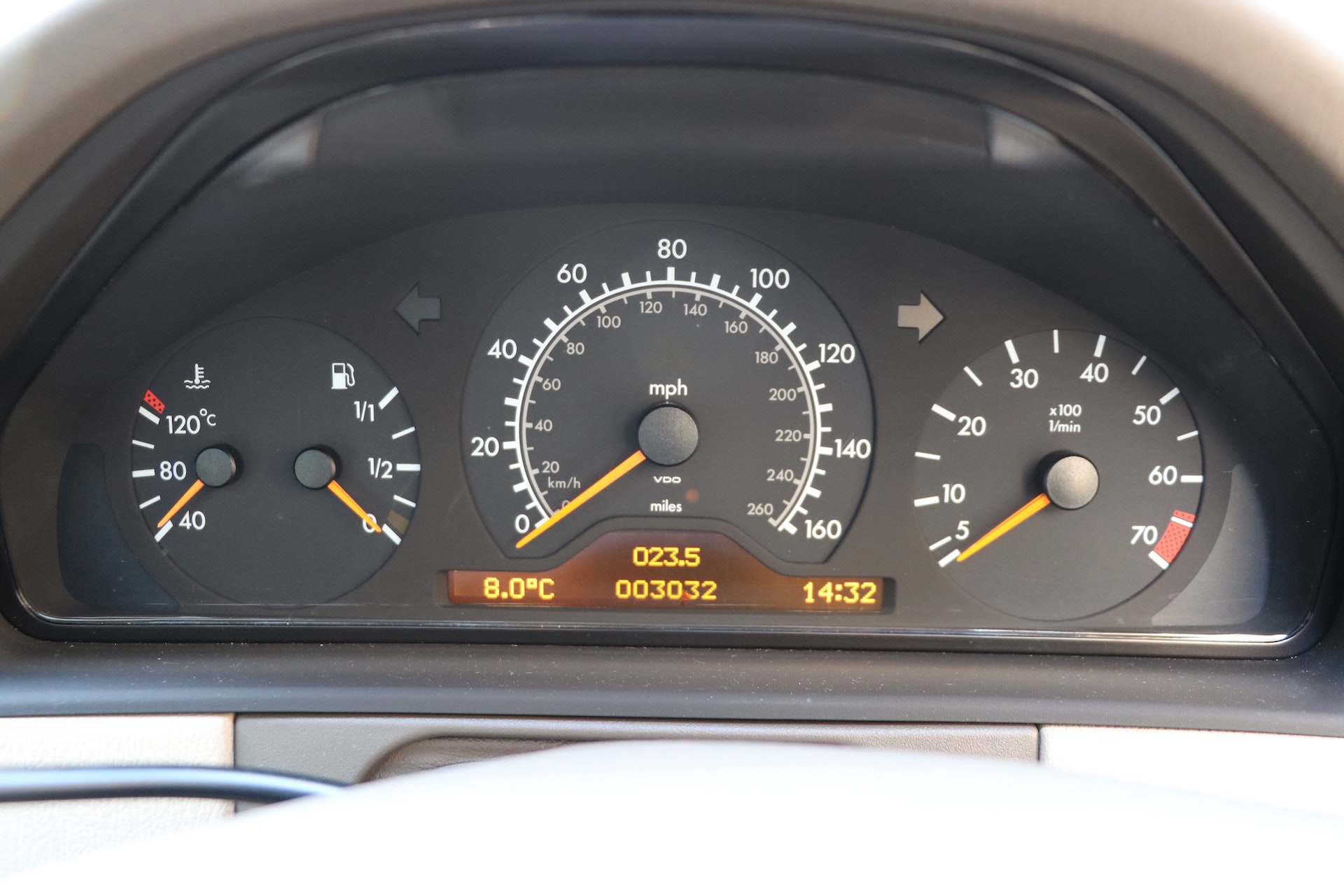 The wheels are fitted with Continental EcoContact tyres in size 215/55 R16 all round. These tyres are those originally supplied on the car, and are date-coded to 1996. They show no signs of damage and have plenty of tread remaining, but are certainly due for replacement given they are more than 20 years old. 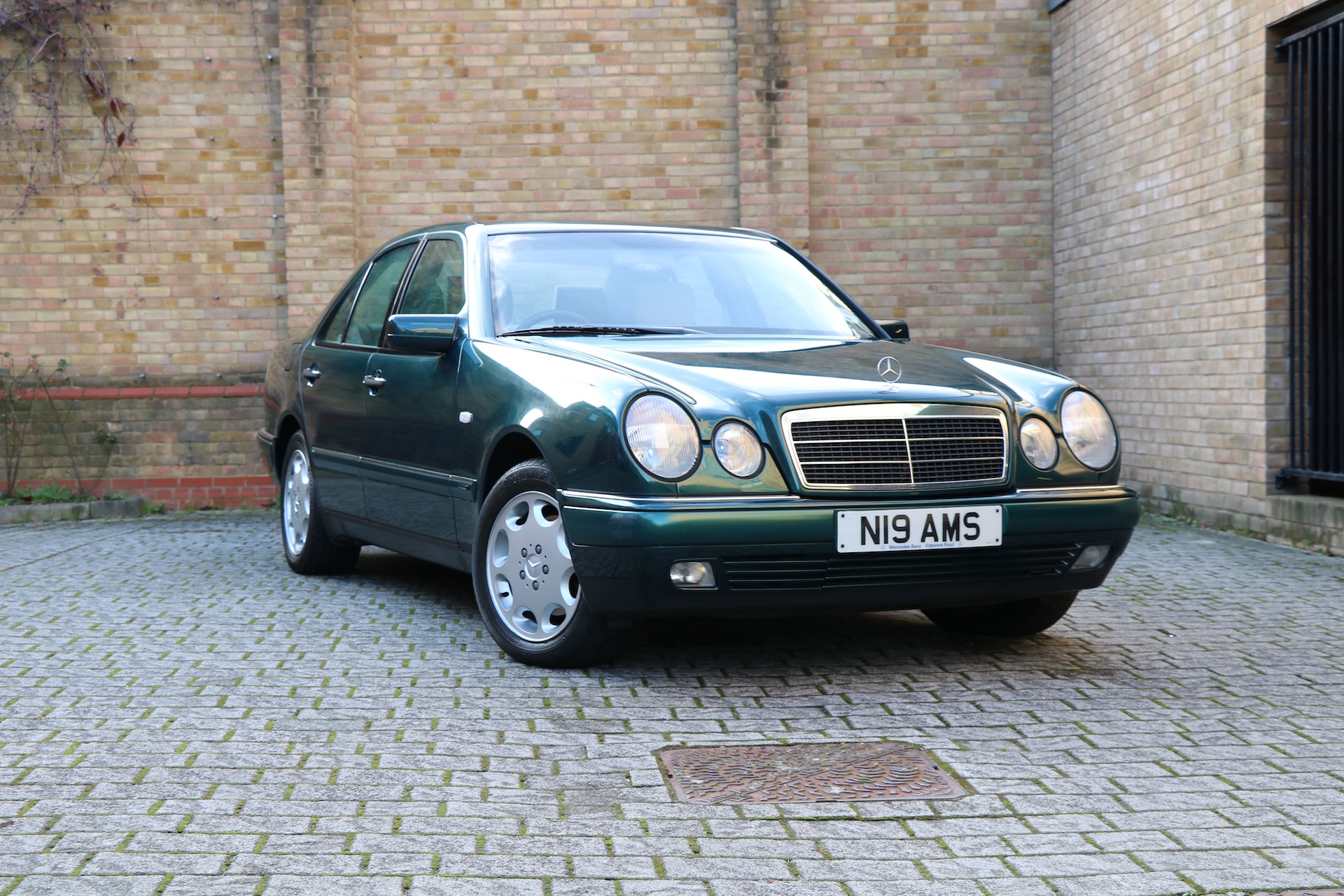 This Mercedes-Benz E320 is a remarkable example of a popular executive saloon, with exceptionally low mileage from new. It is presented in a handsome factory colour scheme, and remains entirely original. An unmissable opportunity for the serious Mercedes-Benz collector.