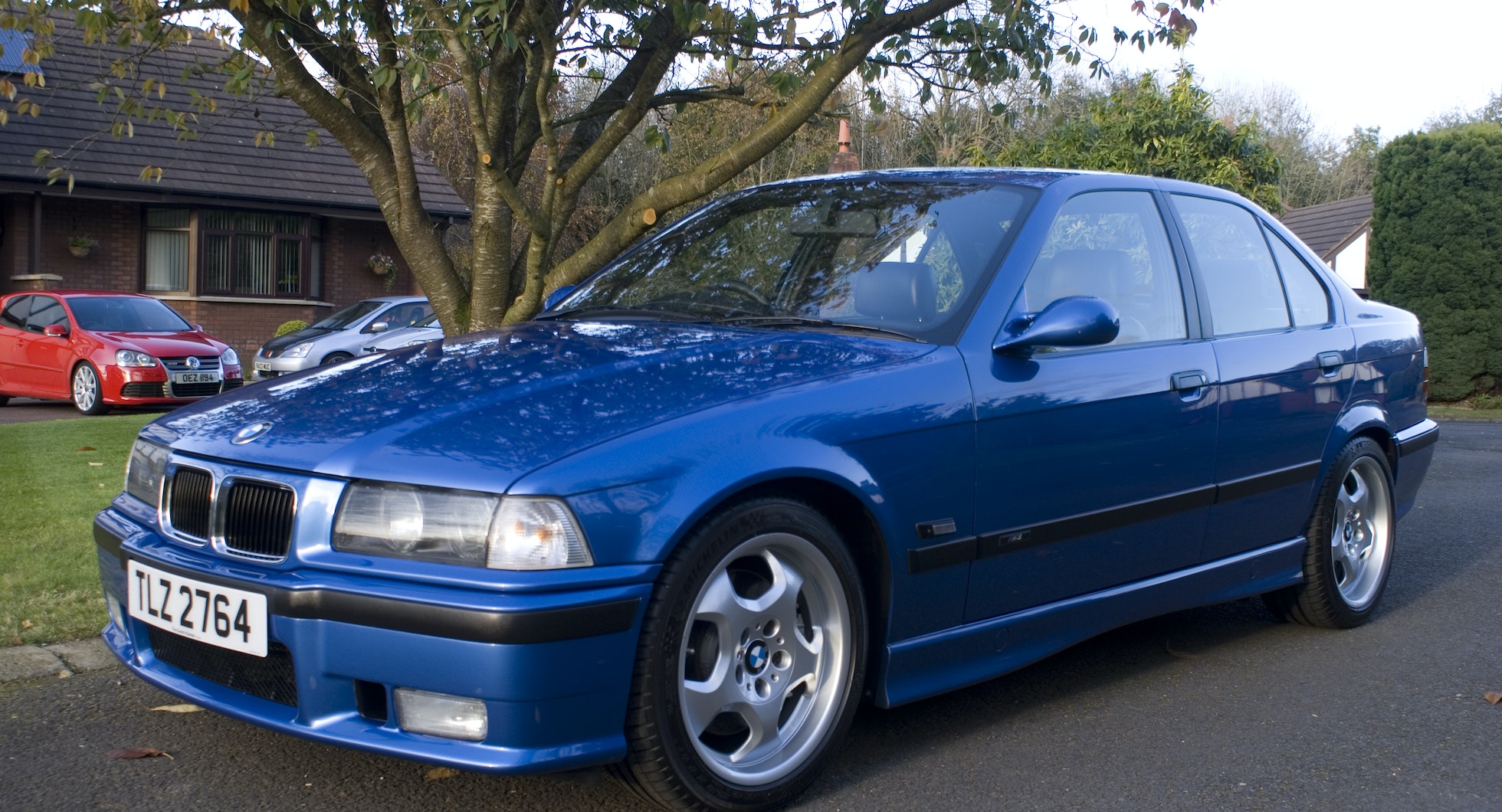 This 1996 BMW M3 (E36) Evolution Saloon is an outstanding and award-winning example of the breed, presented in a striking factory colour and benefitting from extensive restoration work. It is an early facelifted example of the E36 M3 with the 316bhp 3.2-litre version of the S50 straight-six engine, driven through the rear wheels via a six-speed manual transmission. The odometer indicates 80,292 miles from new. 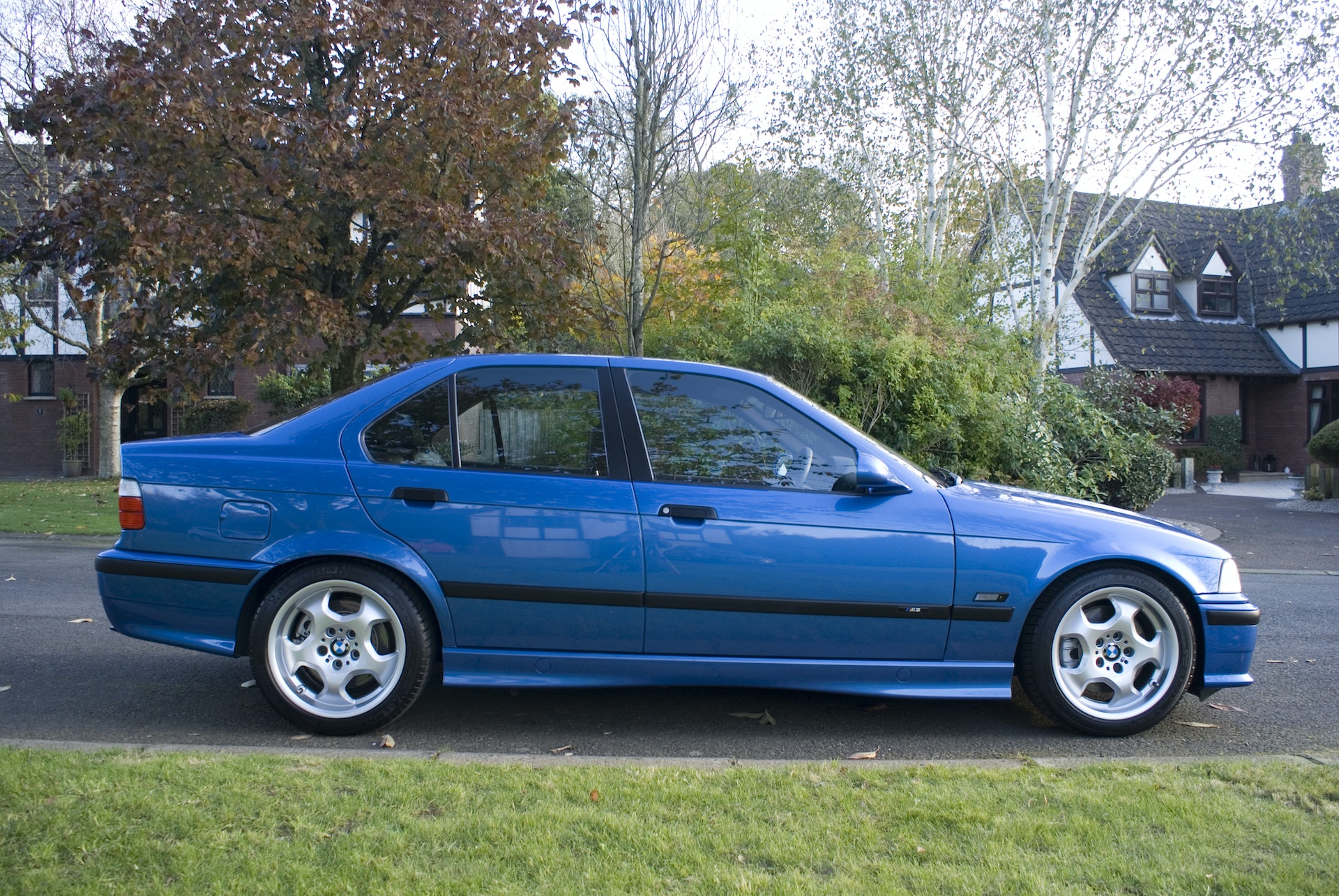 A right-hand drive M3 Evolution Saloon is significantly rarer than a coupe to start with, and this particular car is one of only 242 such cars finished by the factory in Estoril Blue. It was supplied new via BMW dealer The Country Garage in Ballymena, Northern Ireland in March 1996, and returned to the same dealer every year for its annual service until 2002. It has been owned by the vendor for the last six years, and he has enjoyed around 5,000 miles on the road. He has the details of all previous owners, and occasionally still visits the original dealership for parts. 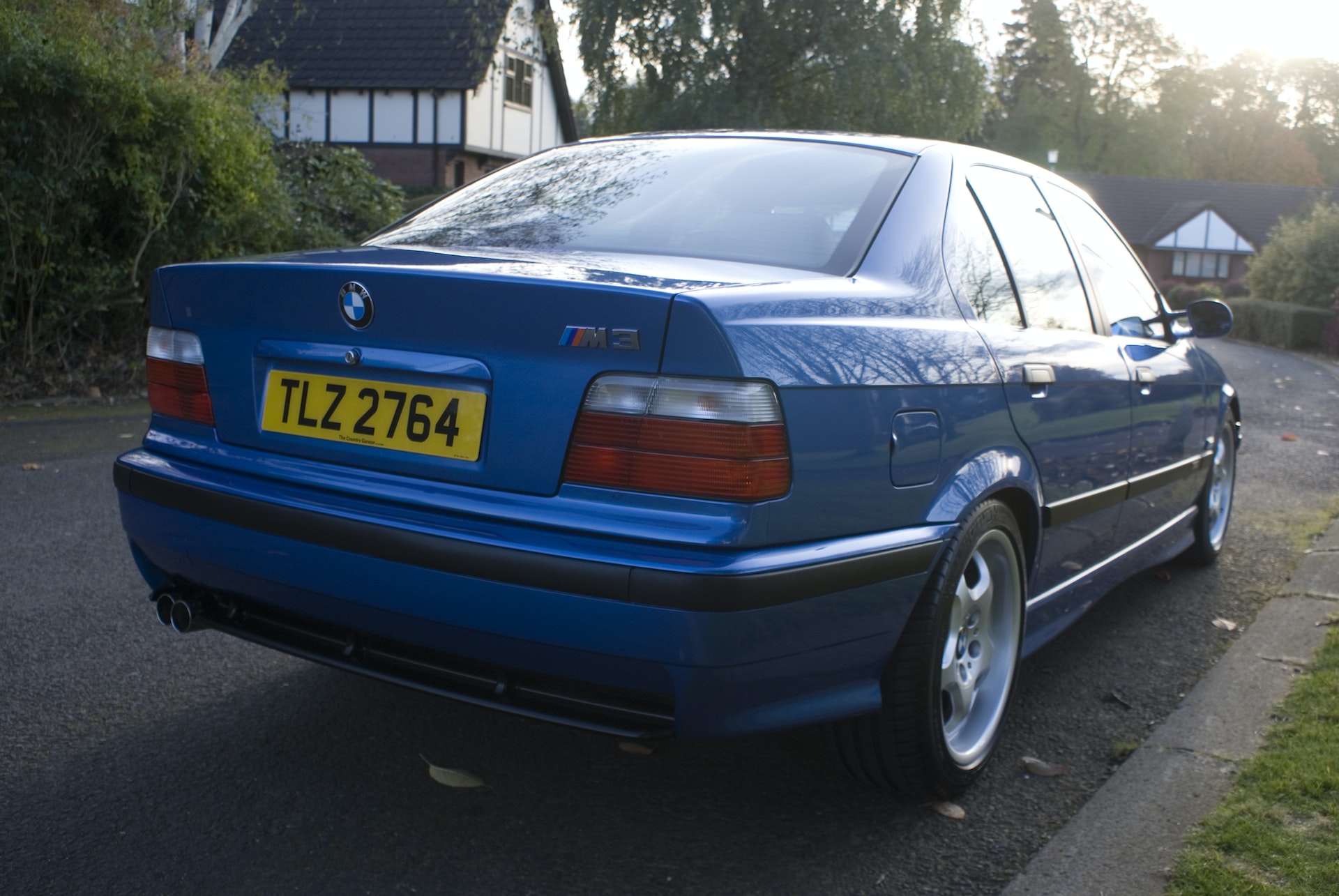 The car presents in outstanding cosmetic condition. As you can be appreciated by the extensive photo gallery below, as well as the detailed walkaround video, the owner is fastidious about keeping the car in superb order, cutting no corners when it comes to cleaning and detailing. During his tenure, the front bumper, bonnet and wings have been painted to remove stone chips, and the rear bumper and sunroof have also been refinished - the latter with a new sliding panel. 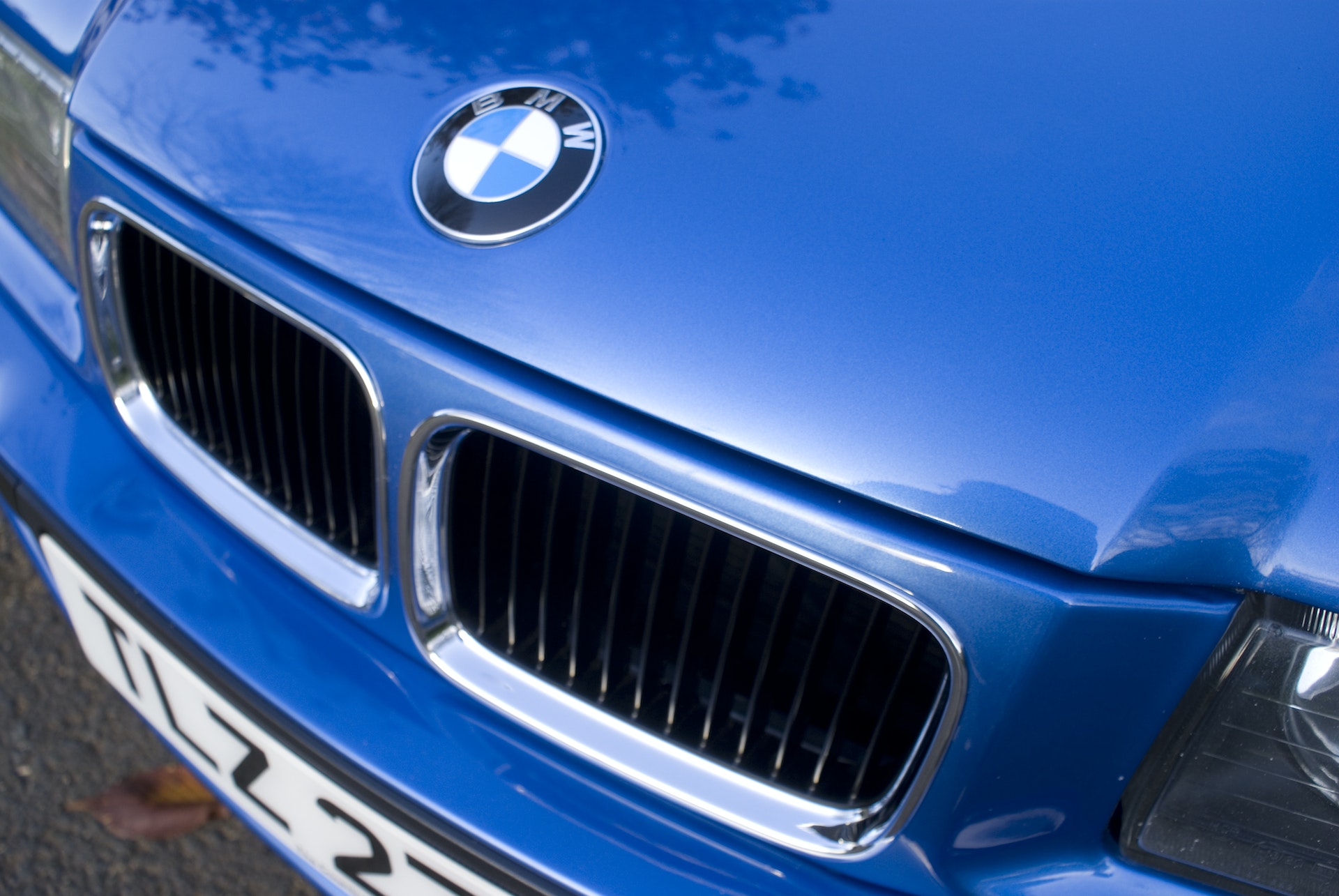 Its impressive appearance even led to it being invited to be a stunning showroom exhibit during the local dealer’s launch of the new BMW 3 Series saloon. The vendor notes a minor mark on a side skirt and a small blemish beneath one of the rear lights as the only exterior imperfections. It is not just the visible paintwork that has been attended to. The owner has stripped the finish on the rear wheel arch liners, sealed with POR-15 protection and repainted them to prevent the common corrosion. The jacking points and rear trailing arm pockets have had a similar treatment. 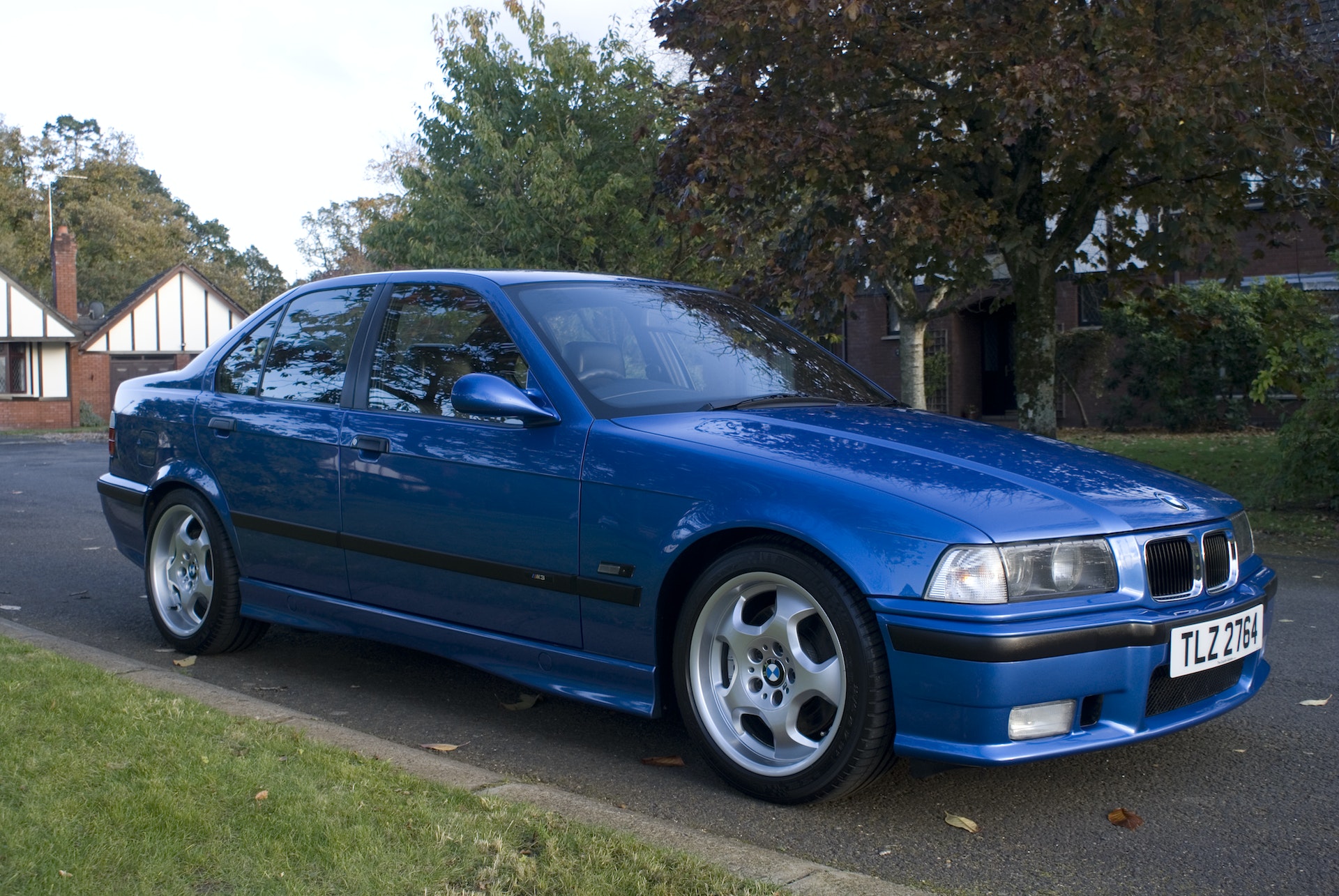 Filling the wheel arches are the original 17-inch ‘M Contour’ alloy wheels, which are all in pristine order having been professionally refurbished, along with renewed wheel bolts, centre caps and valve covers. The full-size spare wheel under the boot floor is in equally impressive condition. 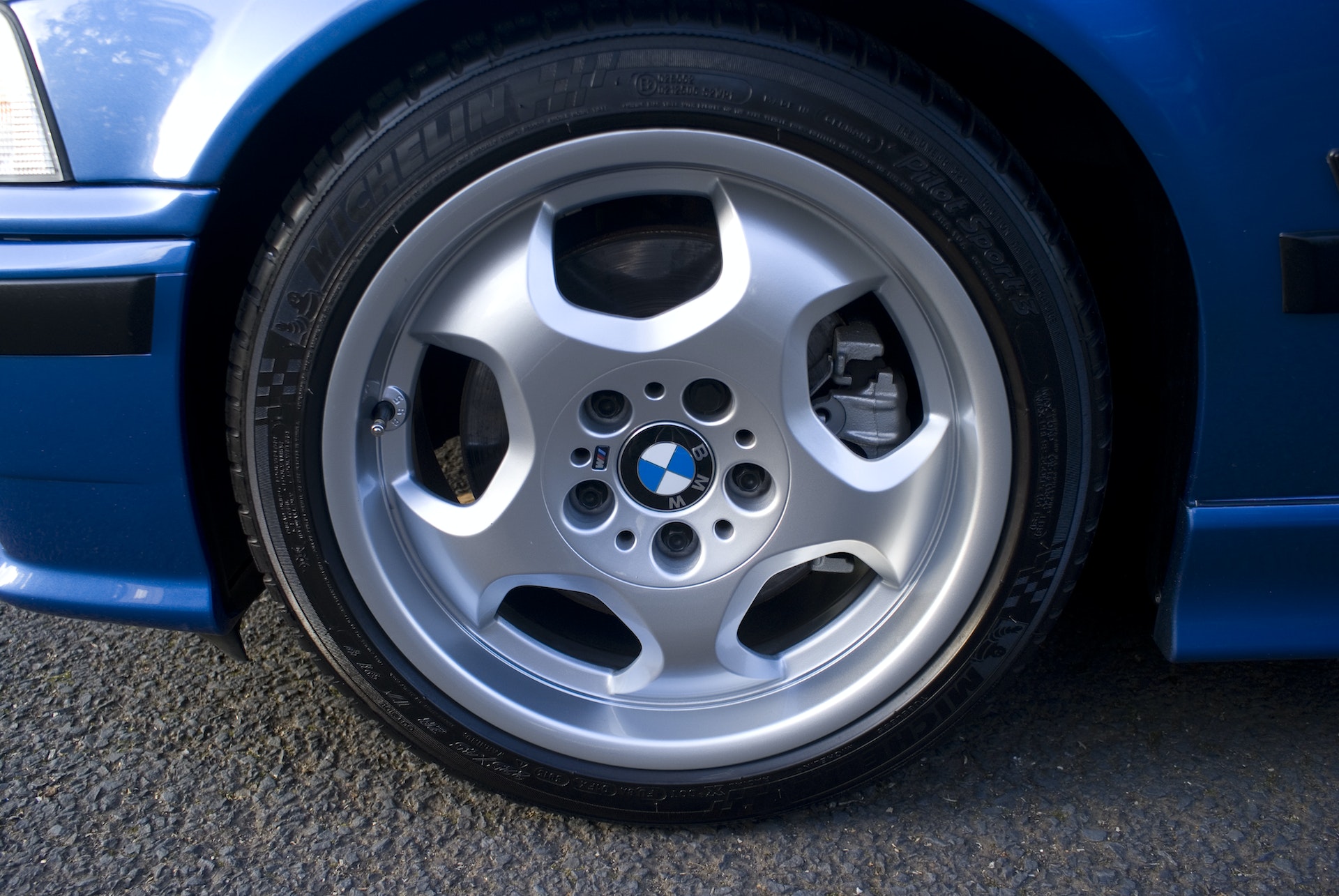 The exterior plastic trim and rubber seals around the car have been either renewed or refurbished as needed to bring the appearance up to show-quality standards. All of the light lenses are OEM items in superb condition. As can be further appreciated by the presentation in the walkaround video, the attention to detail is remarkable. 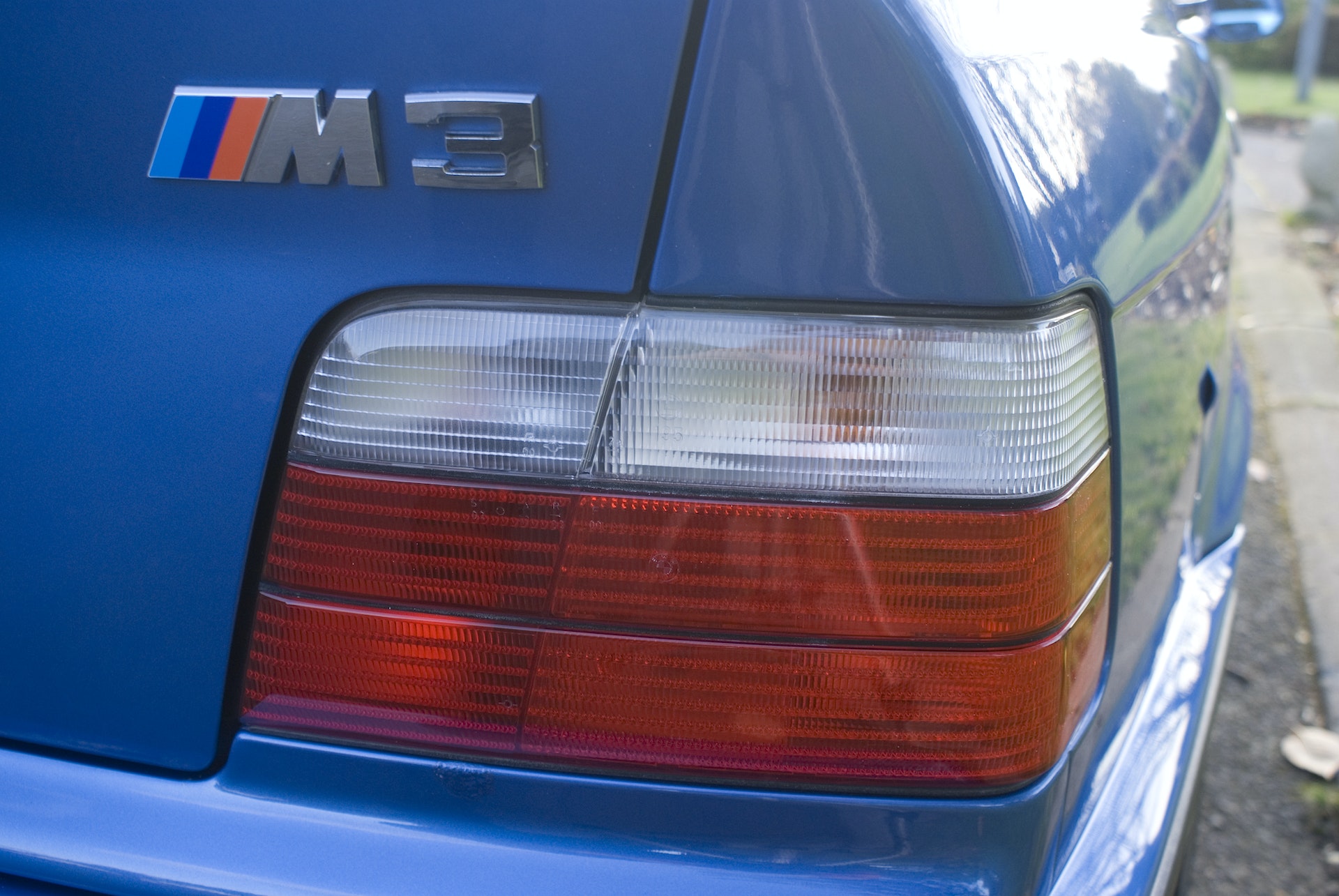 Inside, the seats are upholstered in black Nappa leather, which is complemented by the smart walnut burr style trim around the dashboard and centre console. The leather itself is in great shape throughout, with no rips or tears, and only very moderate wear present to the driver’s seat. Its three-spoke Sport steering wheel is original to the car, and has been re-trimmed in leather to the correct style by leading specialist Royal Steering Wheels in Aylesbury. 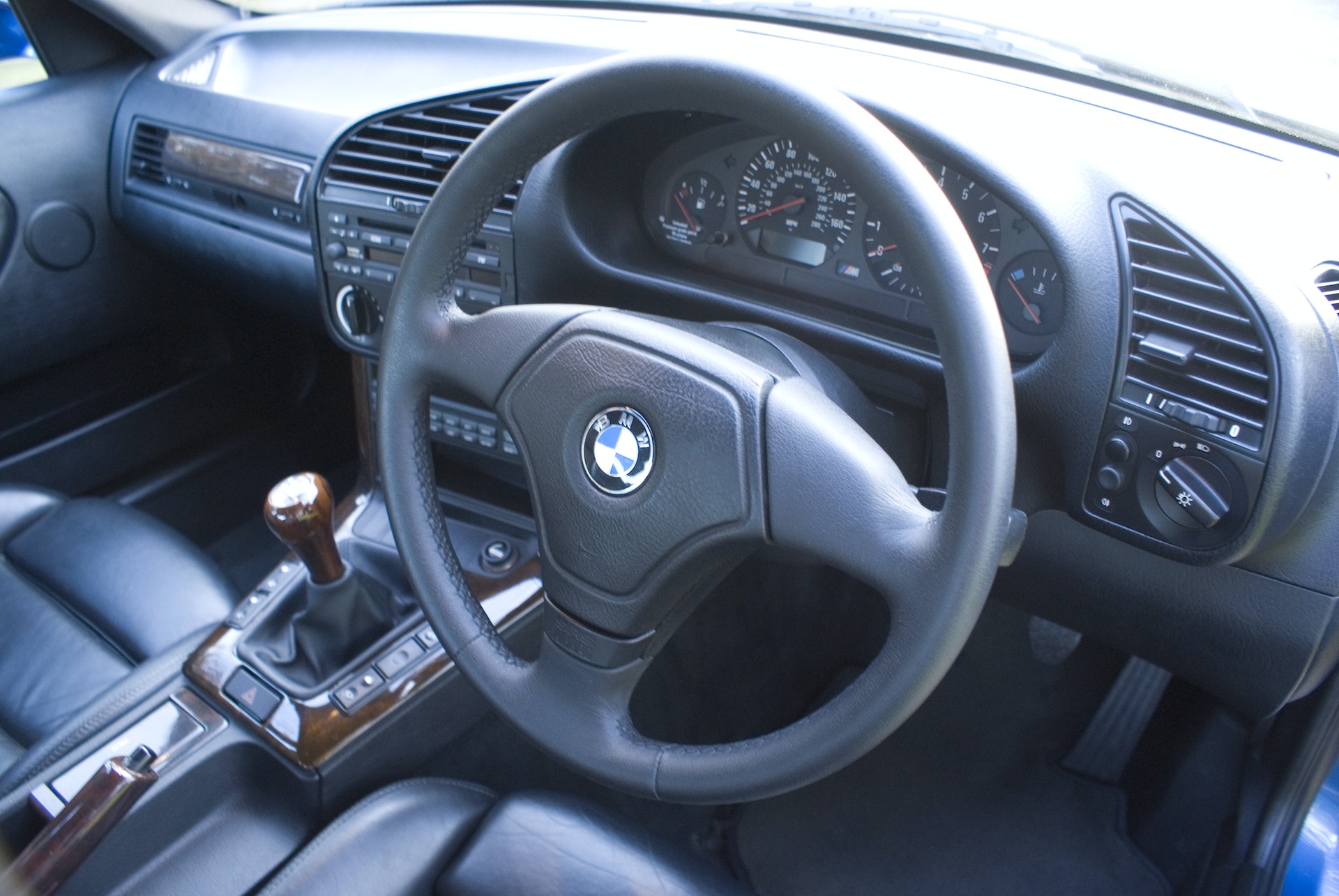 The car features an electric sunroof with tilt and slide functions, as well as electric windows, which all work perfectly. The only upgrade to the interior is a period-correct OEM BMW Business CD stereo unit. There is minor wear to the original black carpets, which are enhanced by genuine tailored BMW overmats. 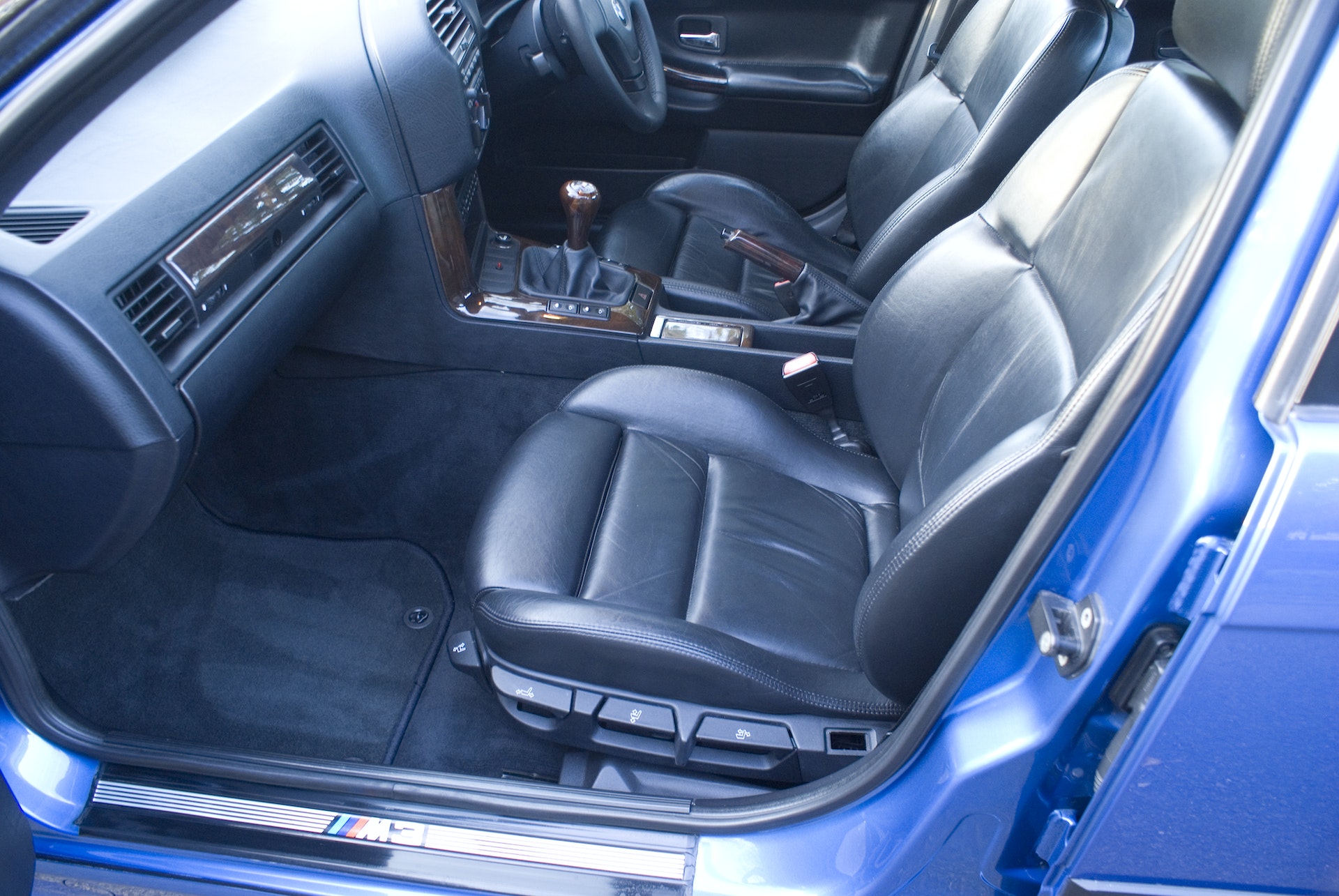 Its boot lining is in very good condition, with only a few very small scuffs and marks. The wheel well under the spare has been repainted and re-lined with sound-deadening material, and the original accessories such as the jack and first aid kit are all still present. 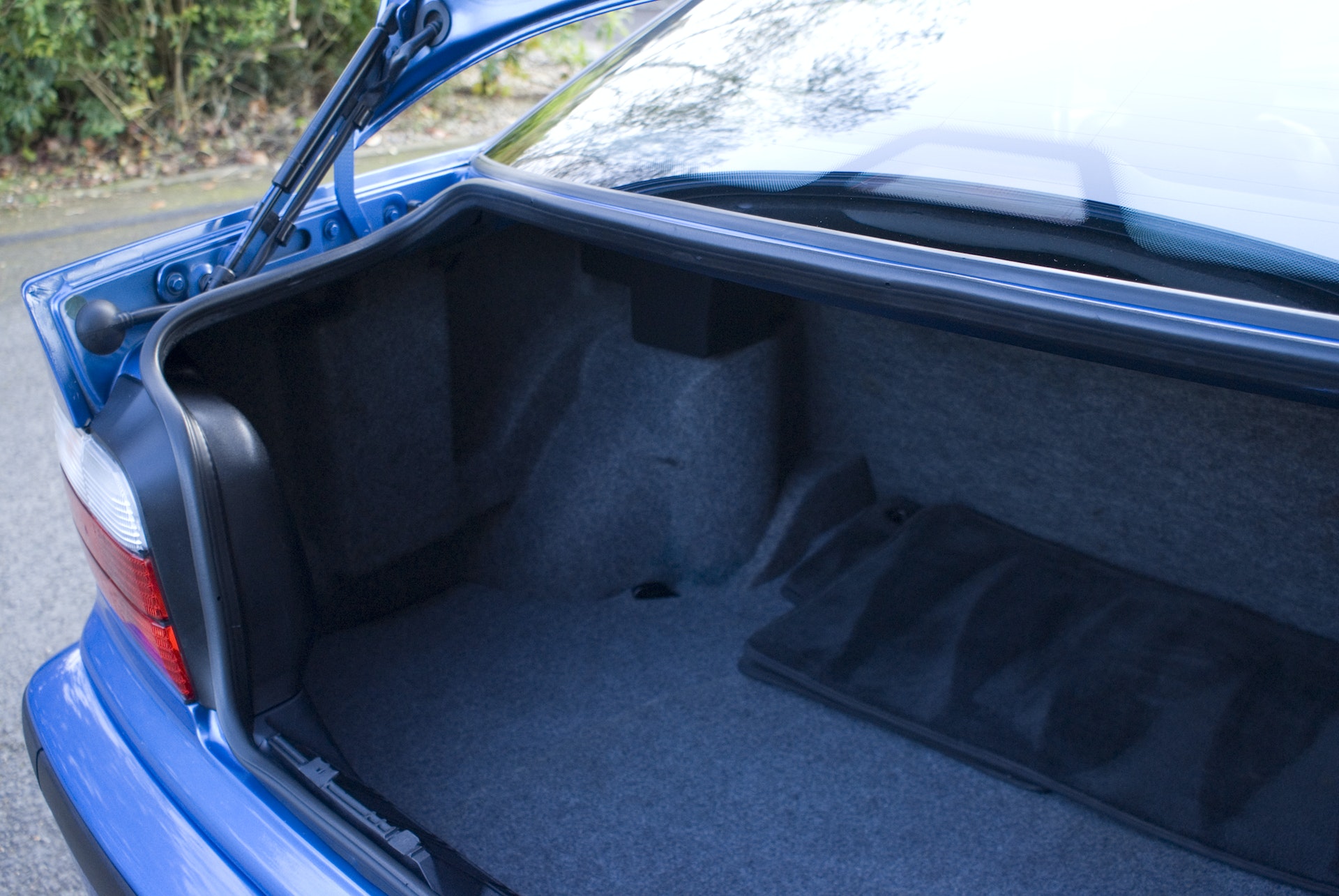 Opening the bonnet reveals a truly pristine engine bay, which showcases the extent to which the owner has cherished this car. The rocker cover, coil cover and plenum have all been refurbished in a textured paint to replicate the BMW OE finish. During this process, the vacuum hoses were replaced, the Idle Air Control Valve was cleaned and lubricated, and the oil breather was cleaned out. The throttle bodies were also attended to and all associated seals were replaced. 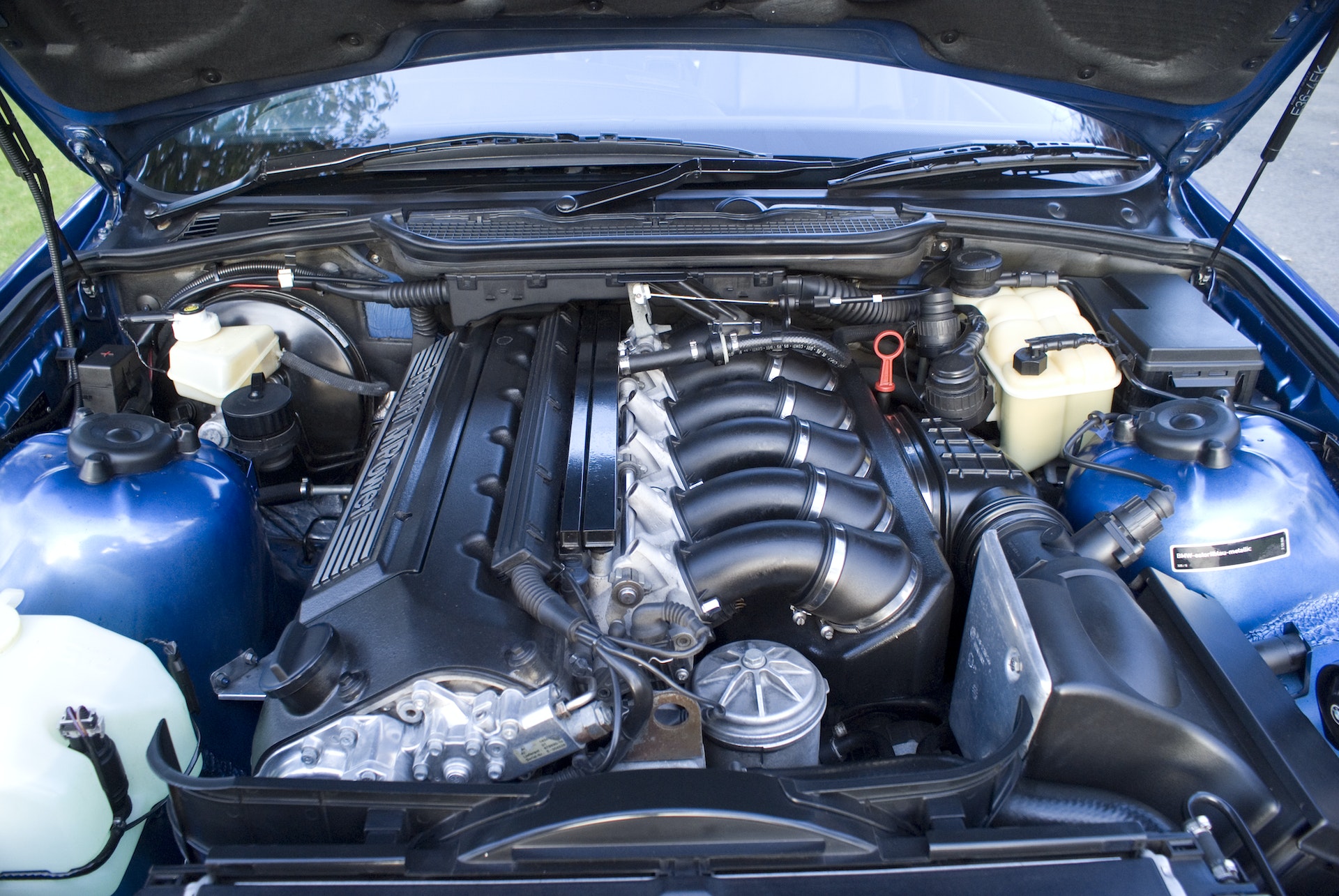 It was last serviced in June 2019, which comprised an oil and filter renewal, replacement of the air filter and VANOS filter, and a new set of spark plugs. 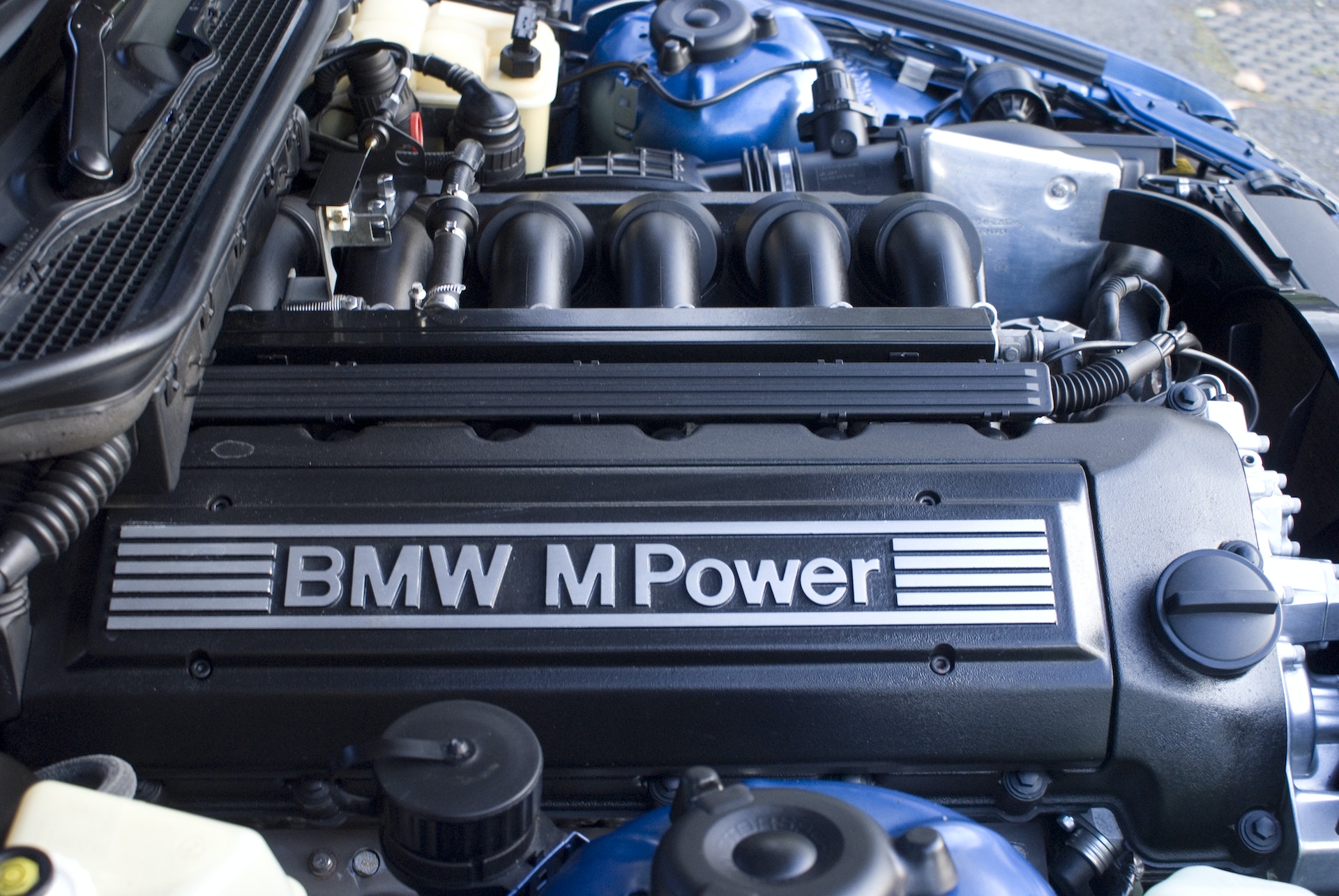 The car is fitted with Bilstein B12 shock absorbers and springs, as well as an x-brace from a BMW Z3 M Coupe. They deliver an even more controlled driving experience without excessively lowered the car beyond the original ride height. The rear suspension arms and bushes have all recently been renewed as well, so the chassis setup is now of a superb standard. The only other upgrade over standard specification is an OEM exhaust that has been subtly tuned to add a little extra volume.

When the suspension was rebuilt, the rear components were stripped, powder coated and re-bushed. Any bolts and bushes that were starting to perish - including the trailing arm bushes - were replaced with genuine BMW items. Once complete, the entire underside was meticulously cleaned. 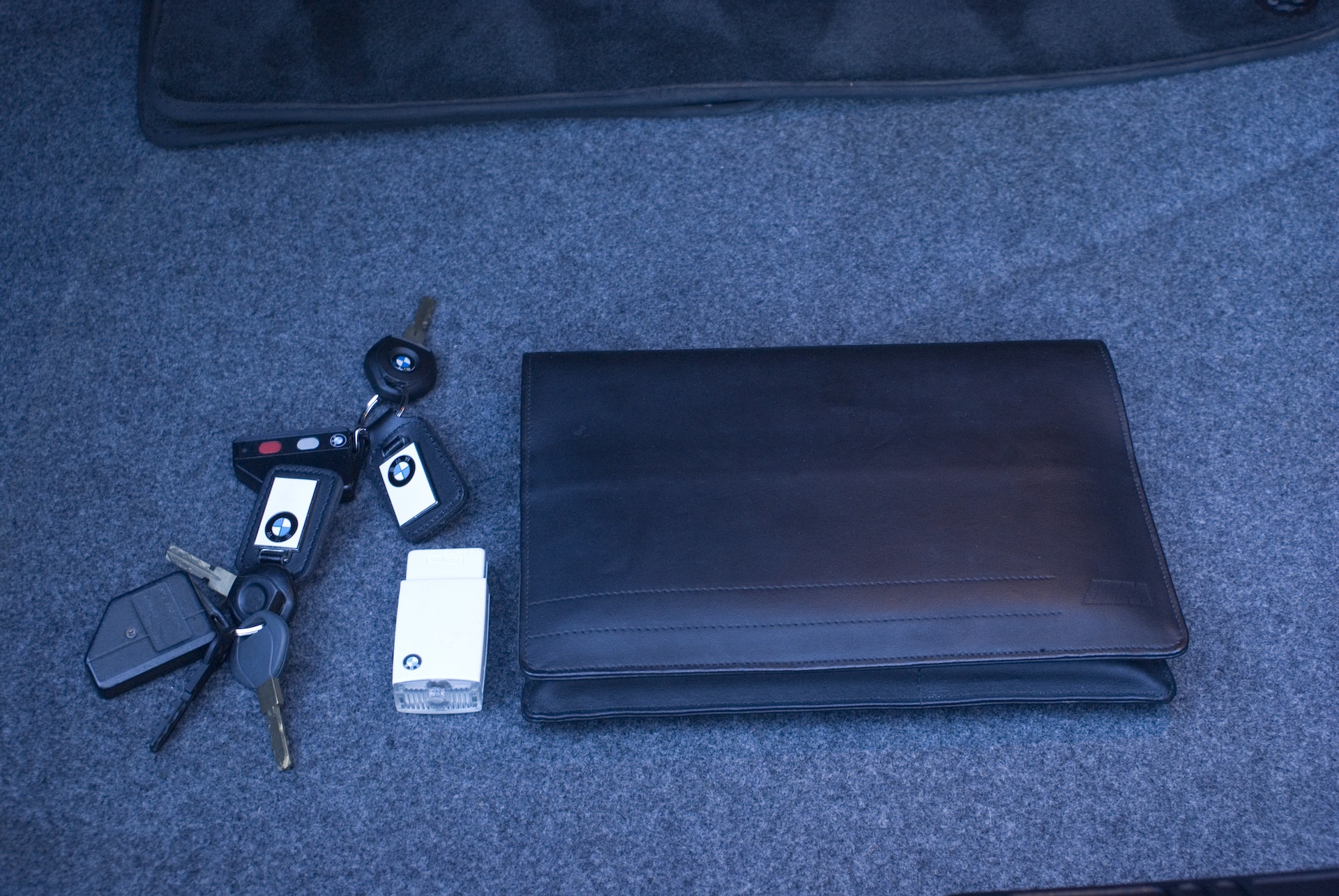 During the vendor’s tenure, the VANOS system has been serviced and tested and is functioning perfectly. It was was upgraded with higher quality seals, high-tensile bolts and a new filter during its service. The gearbox oil has also been renewed in recent years, meaning the shift is much smoother than in less well maintained examples. Its clutch hose - another common problem area on E36 M3s - has also been upgraded to a genuine stainless steel braided item.

Its last MOT in Northern Ireland was in May 2019, which resulted in a clean pass with no advisories. All of the wheels are shod in Michelin Pilot Sport 3 tyres, in size 225/45 ZR17 at the front and 245/40 ZR17 at the rear. The front tyres are date-coded to 2013 and have 6mm of tread remaining, while the rears are dated to 2014 with 5mm remaining. 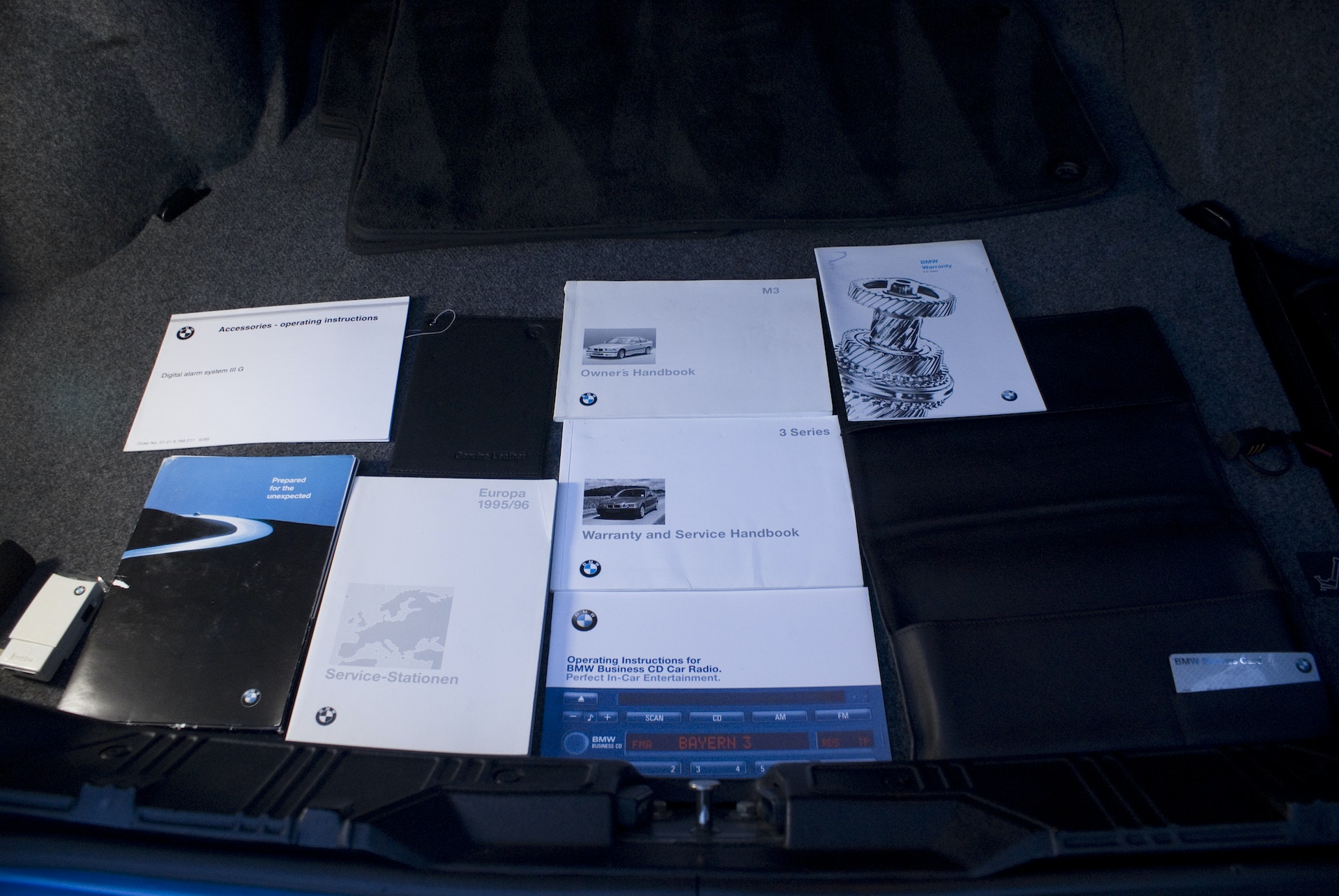 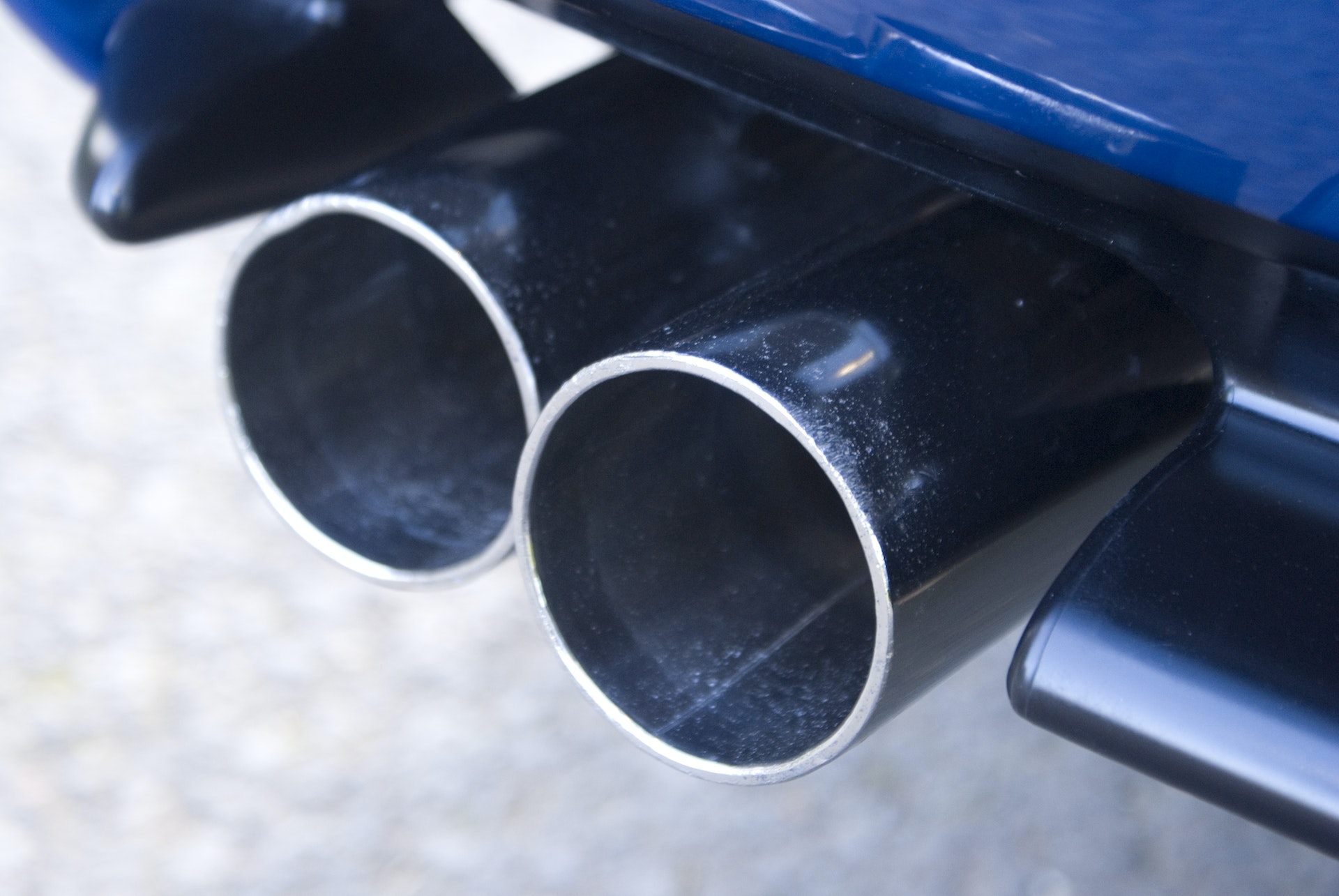 The history file is extensive, comprising box files of associated literature and lever arch files full of paperwork. It has also been well-documented online with an extensive thread on the PistonHeads website, and has unsurprisingly impressed readers with its superb condition.

All of the work carried out by the vendor has also been meticulously recorded in an exhaustive spreadsheet that runs to 95 rows, with a row representing each individual task completed. 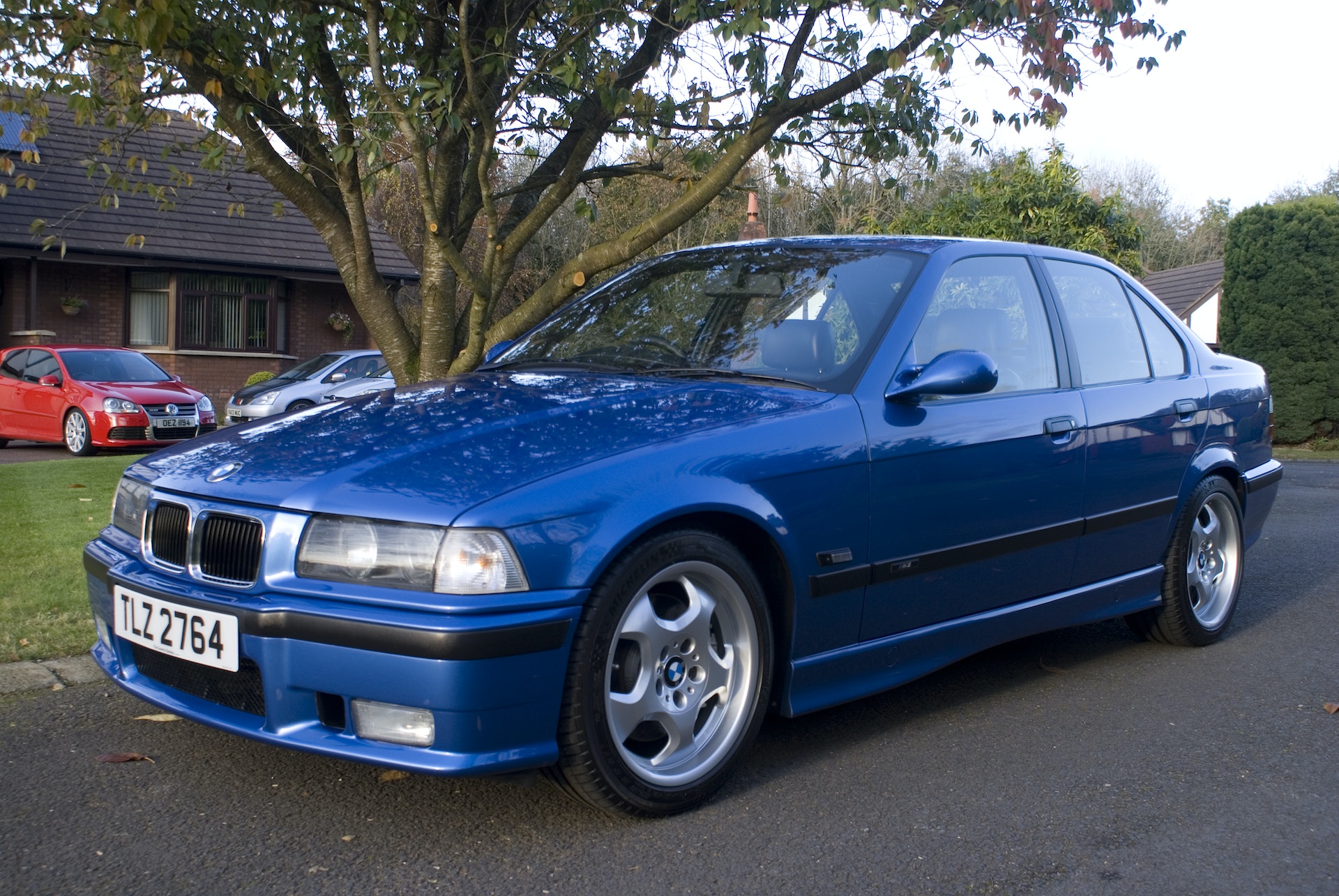 This BMW M3 Evolution Saloon represents a superb opportunity to acquire a show-quality car in a stunning factory colour. Its provenance and documentation is terrific, and it benefits from having been lightly restored by its fastidious owner. The work done on the car is a matter of public record thanks to detailed online updates throughout the vendor’s tenure. In his own words: “I have absolutely babied this car throughout my ownership, restoring and replacing anything I touched”. This is a superb car, presented thoroughly in both the photos and video below, and it is now offered to another fellow enthusiast to enjoy.

Please note: numerous spare parts are held by the vendor, including the original exhaust. While these items are not included in the sale price during the auction, he would be happy to discuss prices for individual parts after the auction.