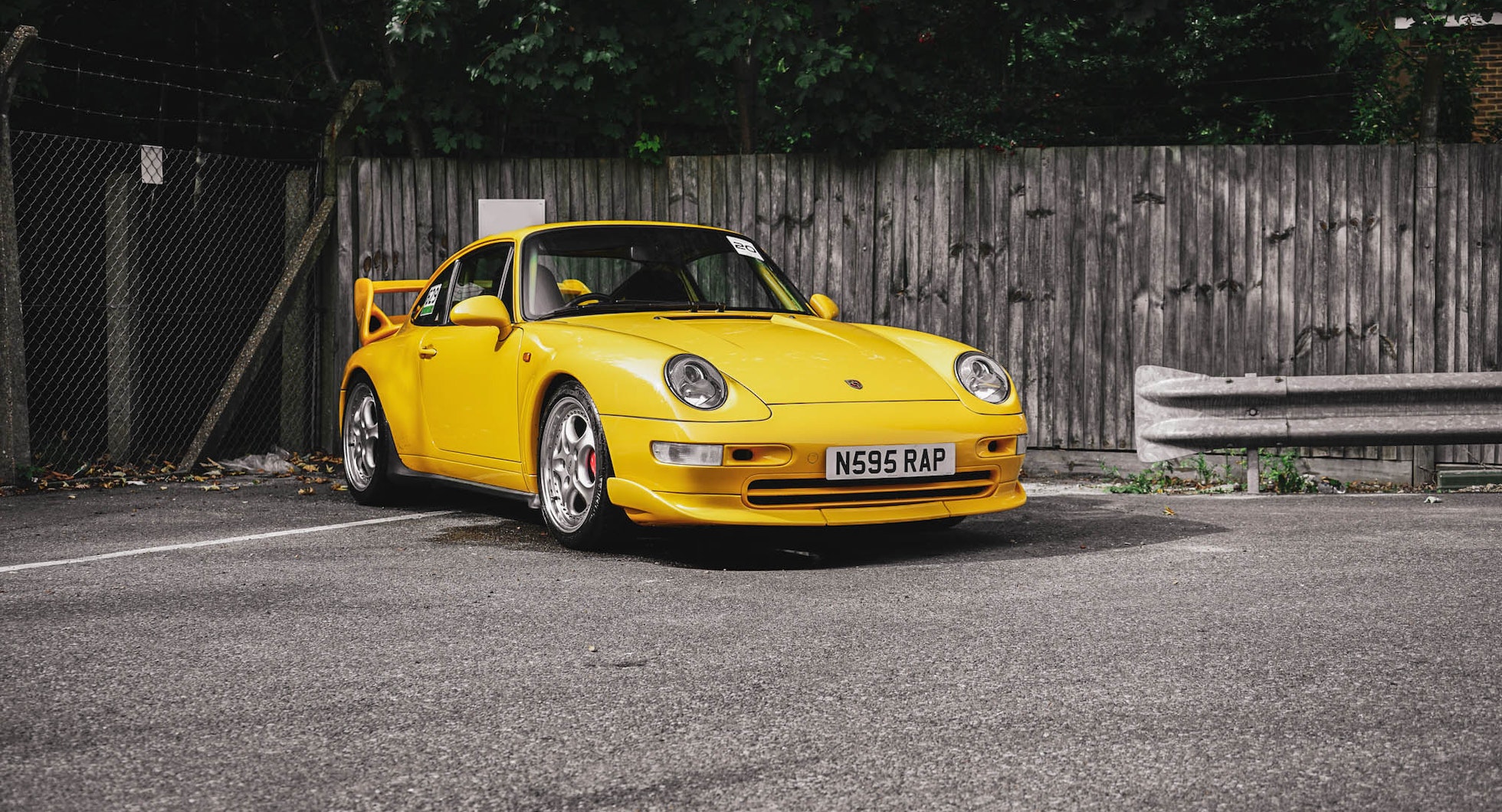 This 1995 Porsche 993 RS Clubsport 3.8 Recreation is an eye-catching and exacting tribute to one of the most iconic and desirable 911s. It is equipped with a 3.8-litre naturally aspirated flat-six M64/20 RS engine, driven through a six-speed manual gearbox, and has covered 79,728 miles from new. 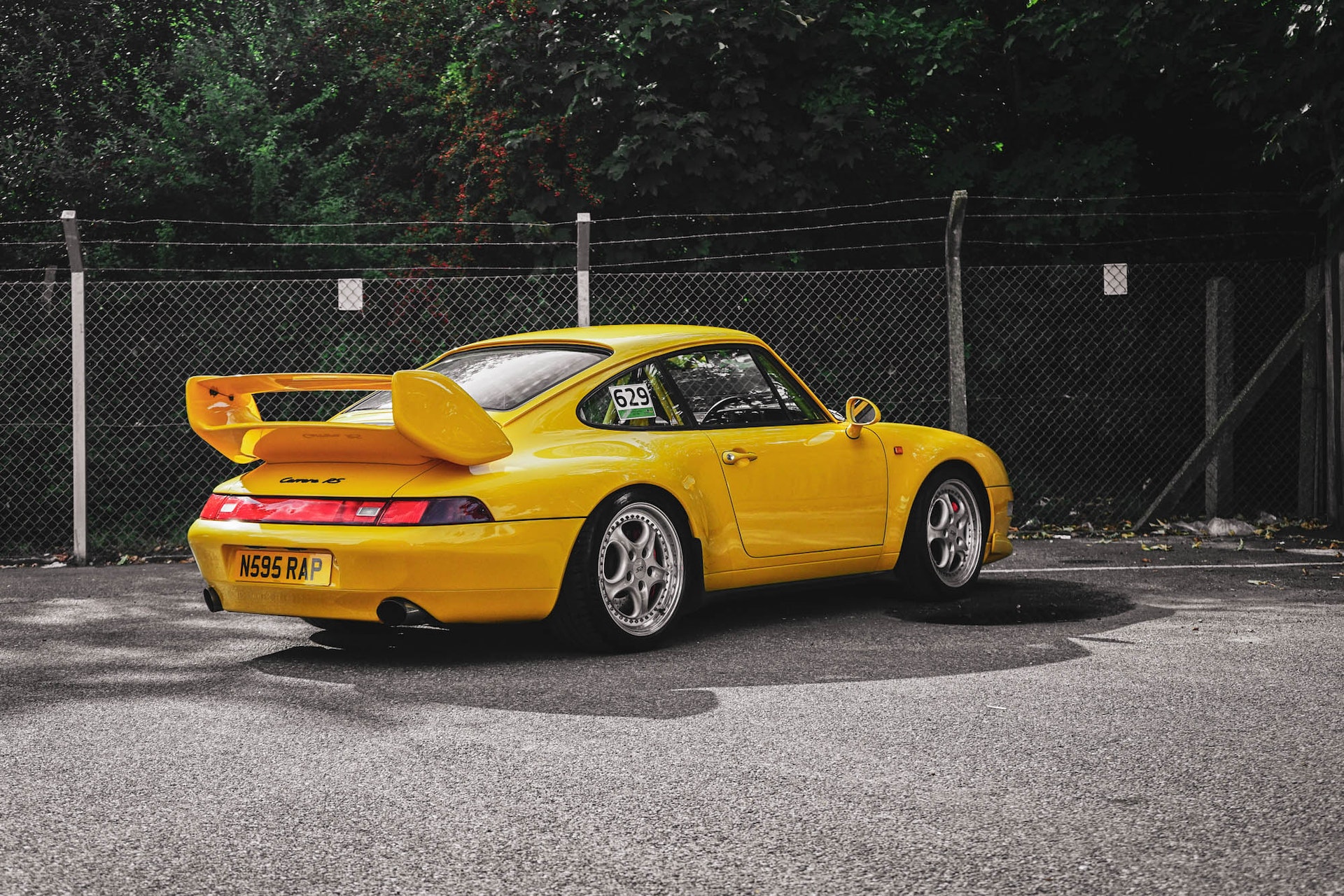 The car was first registered on 1 February 1996 in the UK as a standard 993 Carrera in Speed Yellow. It was much-loved in its original 3.6-litre specification and passed through a few owners before it was purchased by Richard ‘Jackal’ Morris, a well-known member of the 911uk.com community, in April 2009. He purchased the high-specification, low-mileage Carrera C2 from an owner in Sussex who had cherished it for around nine years. Before that, it was owned by the parts manager at his local Porsche specialist. The vendor purchased the car from Richard two years ago (having followed the build over years as documented on Richard’s website) and has since covered around 2,000 miles. 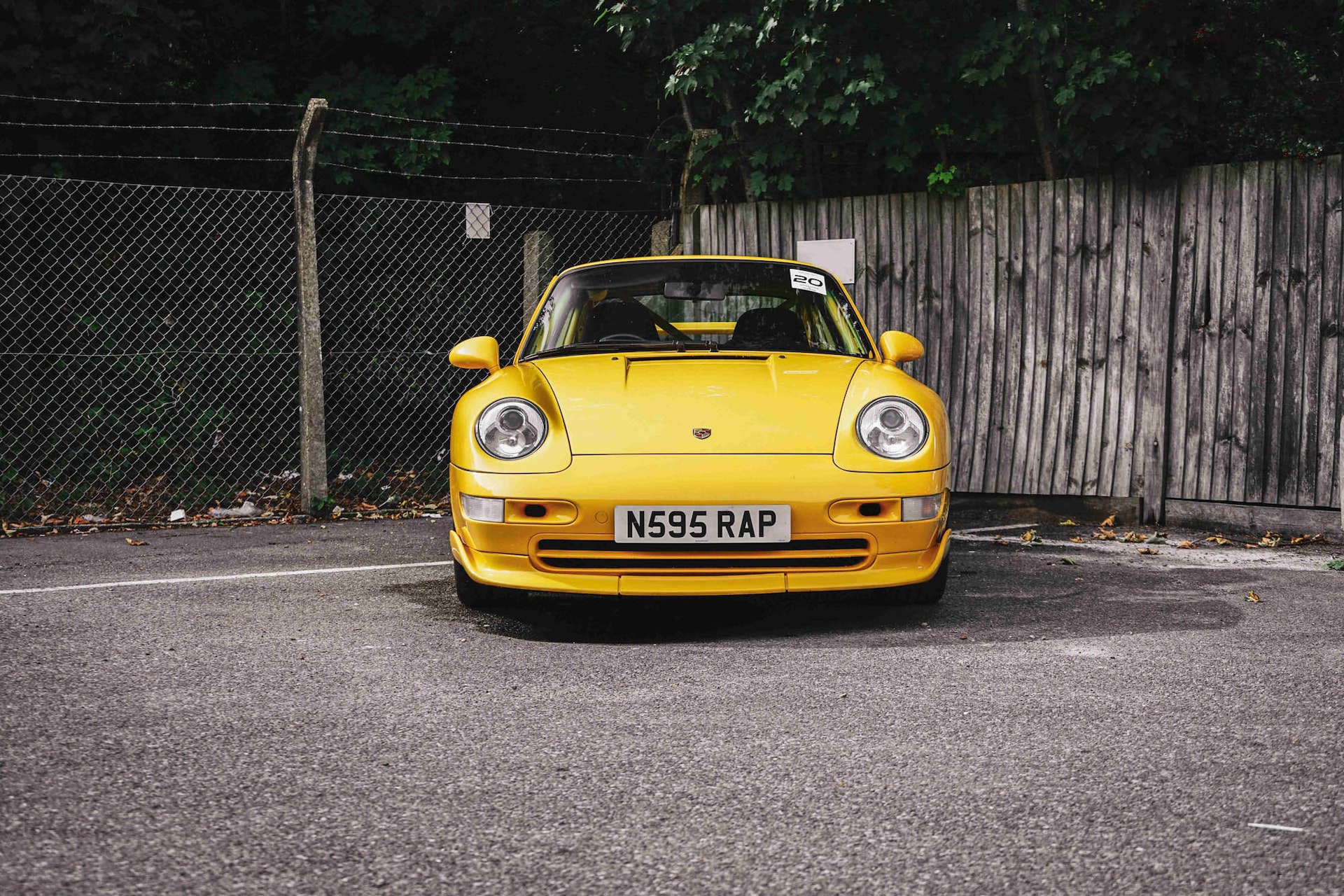 While a very impressive sports car in its original configuration, Richard decided that he wanted to fully convert the car to the holy grail of naturally aspirated 993s — an RS Clubsport. With original features being the priority, he set about producing one of the finest recreations of its kind, using almost exclusively genuine Rennsport parts with obsessive attention to detail. 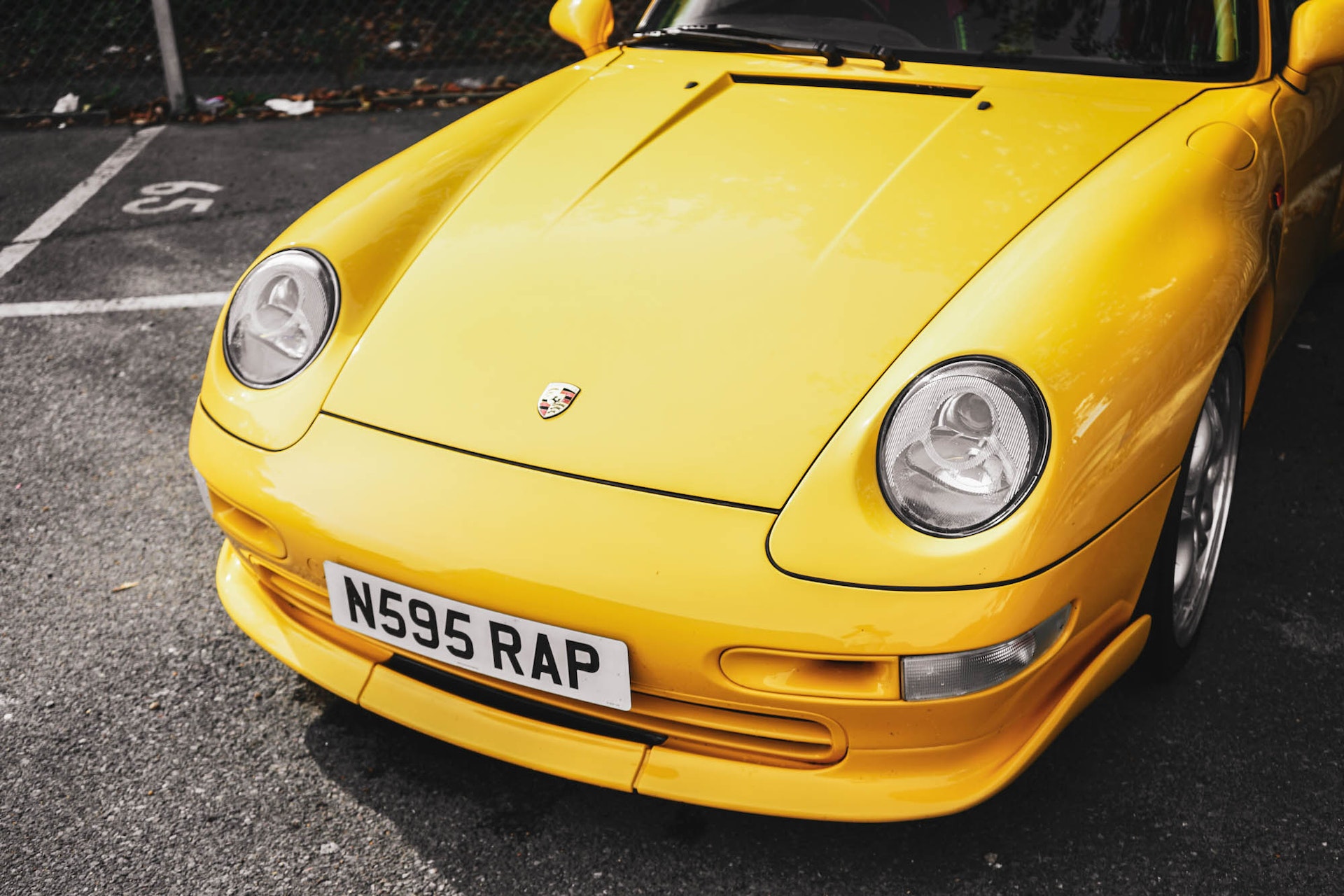 The car was built and upgraded fastidiously over eight years, with the last round of major works taking place in 2015. Tony Littlejohn of GTR Motorsport fabricated and installed the Clubsport roll cage, as well as the stripped-out interior, which was to the exact RS specifications, right down to the smallest of details. GTR Motorsport sourced the tubing for the cage from the same factory that supplied the genuine RS cars, then ensured that the weld patterns and lengths on the cage were replicated perfectly. The interior also features a genuine RS steering wheel, gear knob and manual-winding windows. 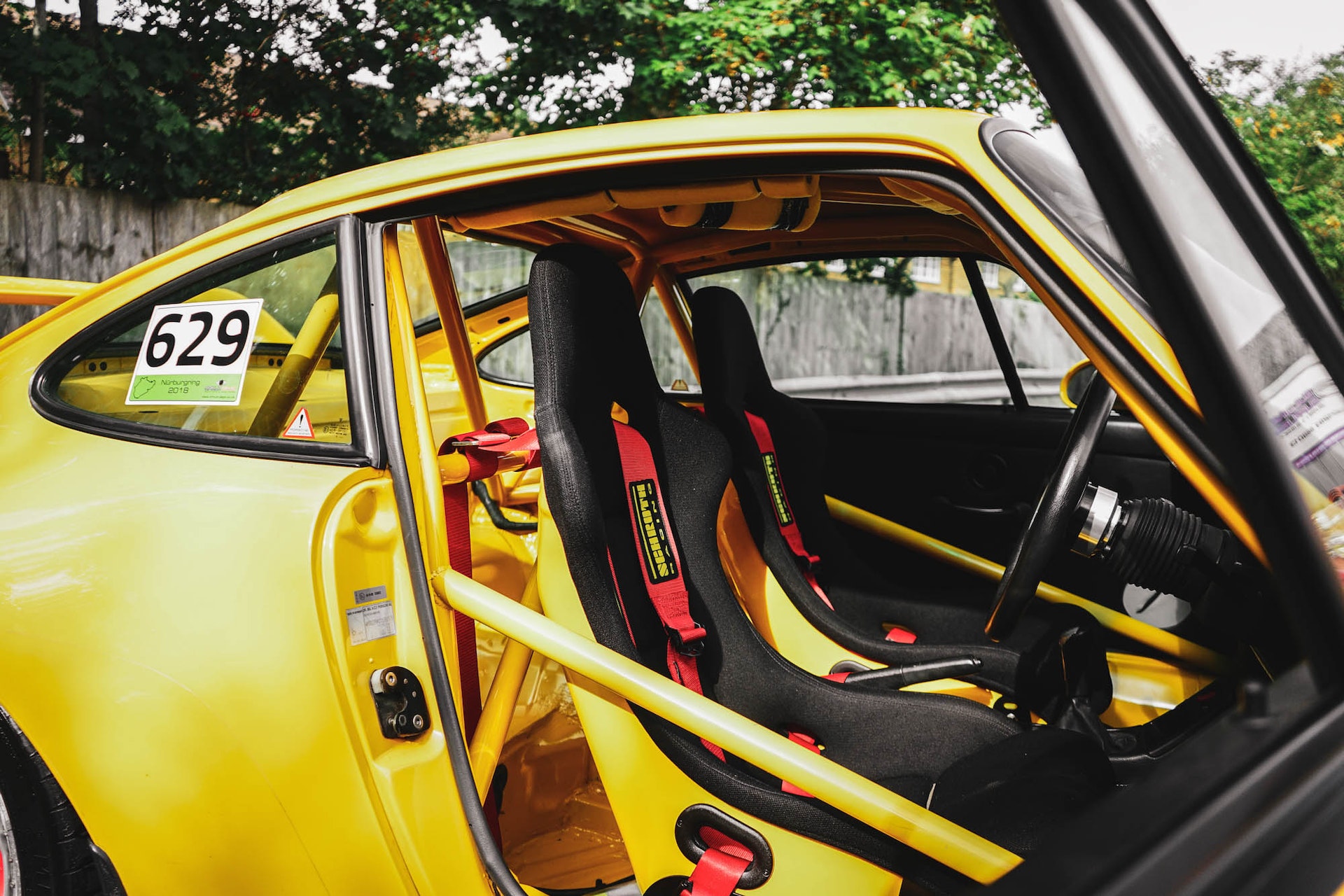 During the build, almost every chassis component on the car, including suspension components, bushings, ball joints, tinware, screws and bolts, discs, callipers and heat shields were either replaced or refurbished, powder-coated, dipped and plated, or just extensively cleaned. 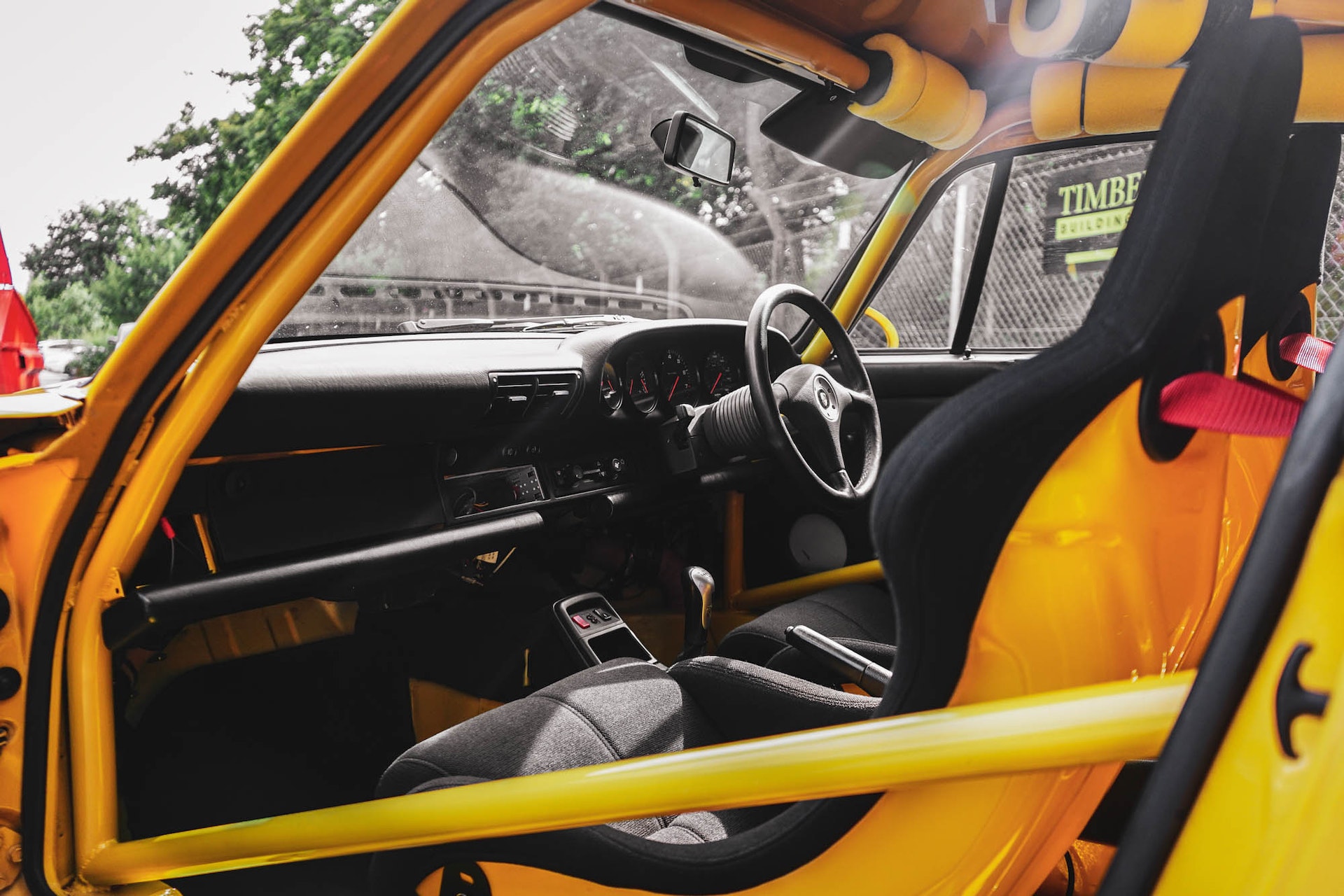 Perhaps most significantly, Paul McLean of GT Classics supplied a completely refurbished and rebuilt original 3.8-litre RS engine, which sets it apart from almost every other homage or recreation. The car was mapped at Porsche specialist 9m by Wayne Schofield, while the geometry and ride heights were done by Chris Franklin at Center Gravity. 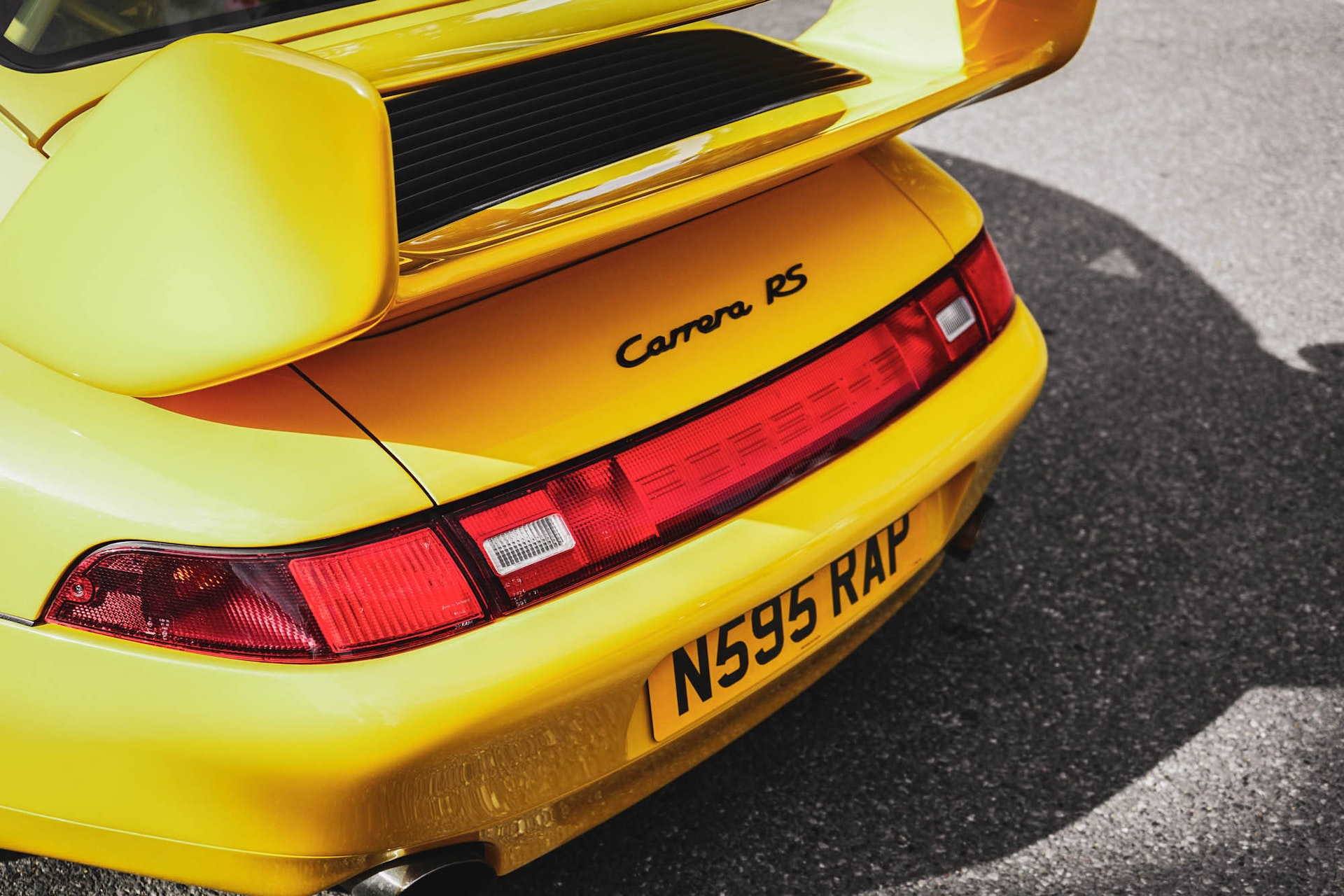 The creation of this car was a no-expense-spared exercise, resulting in a remarkably complete vehicle. Beyond an authentic 3.8 RS engine, it is also fitted with genuine RS clutch and single mass flywheel, single pulley and quick-shift mechanism; RS engine mounts and carrier; and a factory-supplied M220 limited-slip differential. 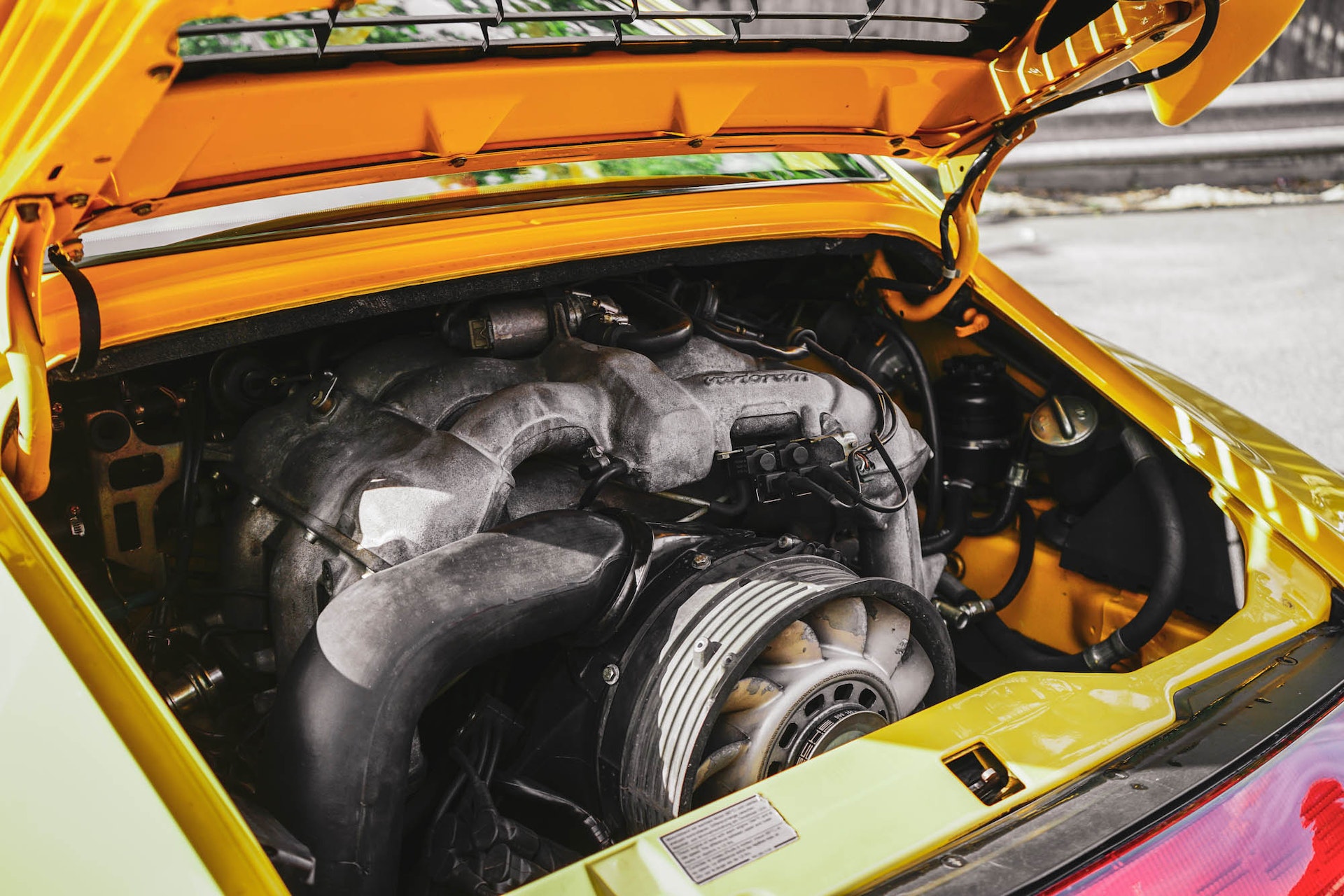 Its suspension features genuine RS front uprights, A-arms and a strut brace, as well as correct monoball top mounts and anti-roll bars front and rear. The rear A-arms and toe arms were re-bushed to RS specification rubber. Its coil-over shock absorbers are Bilstein B16 PSS10 items. 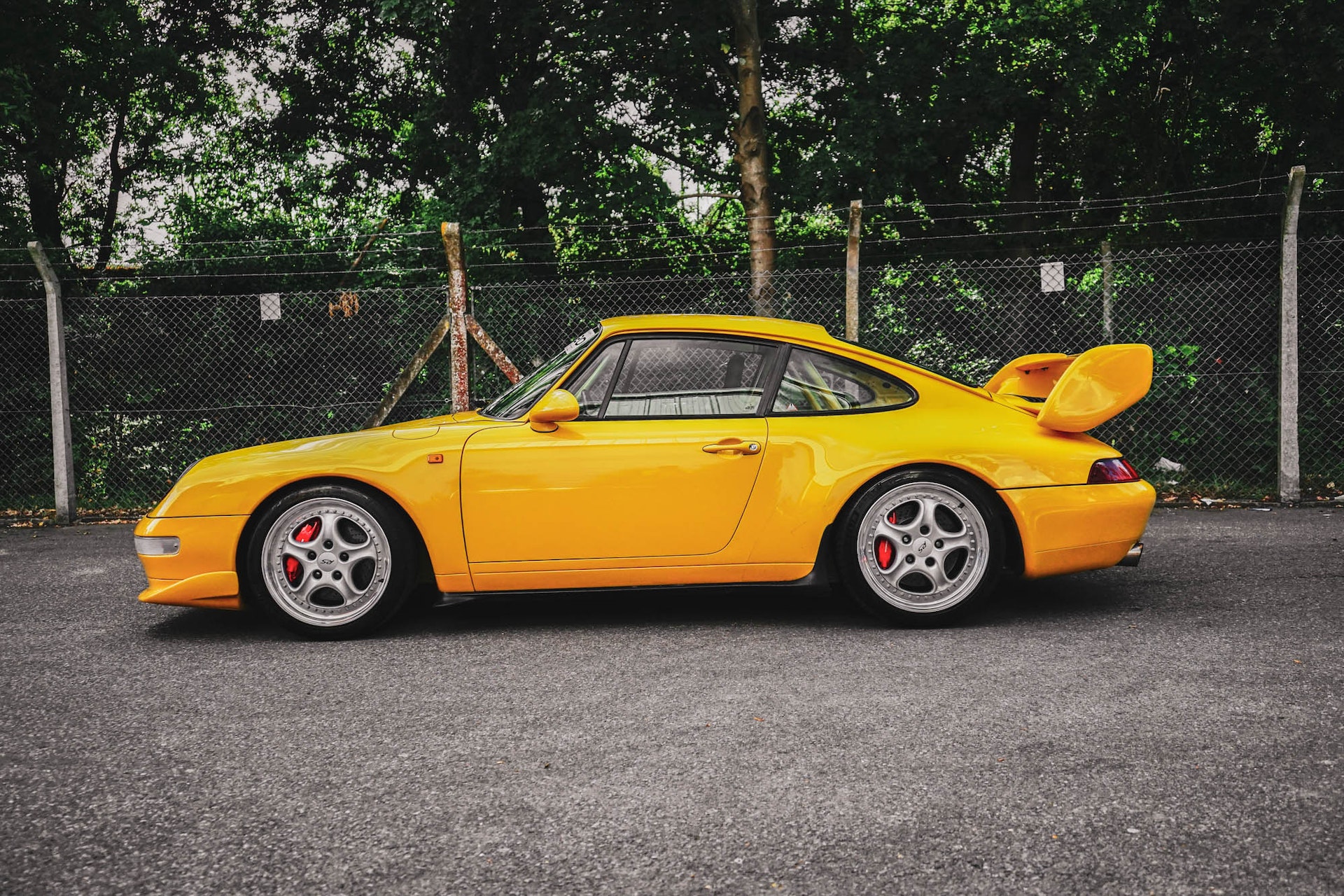 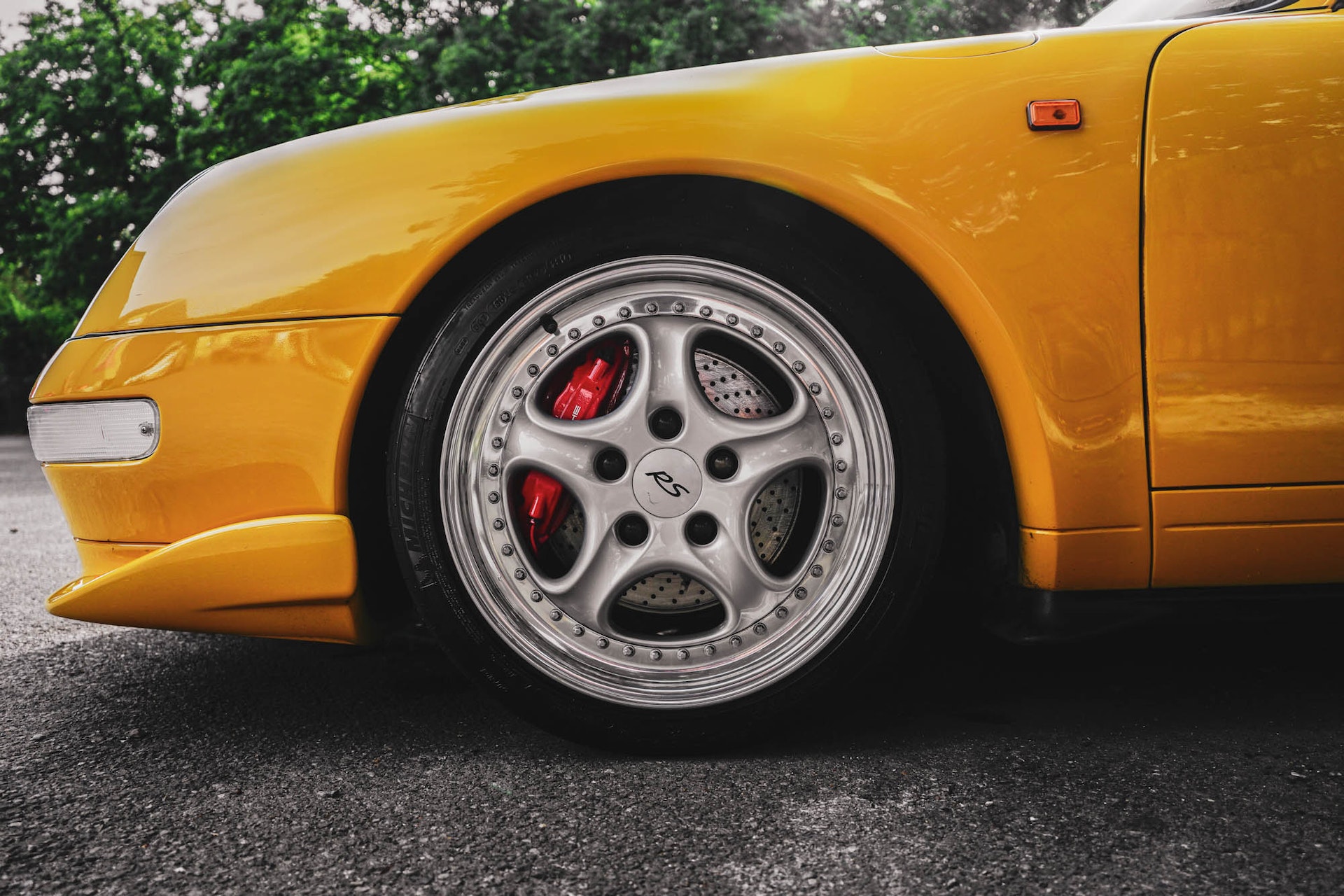 The paintwork is described as being in good overall condition, with a few stone chips found on the side mirrors, wheel arches and nose. During its conversion, the car was professionally painted in the Speed Yellow paint it wears now, with some touch-ups more recently where needed. There are a few water spots and dirt marks evident in the pictures, but nothing a thorough detailing wouldn’t sort. 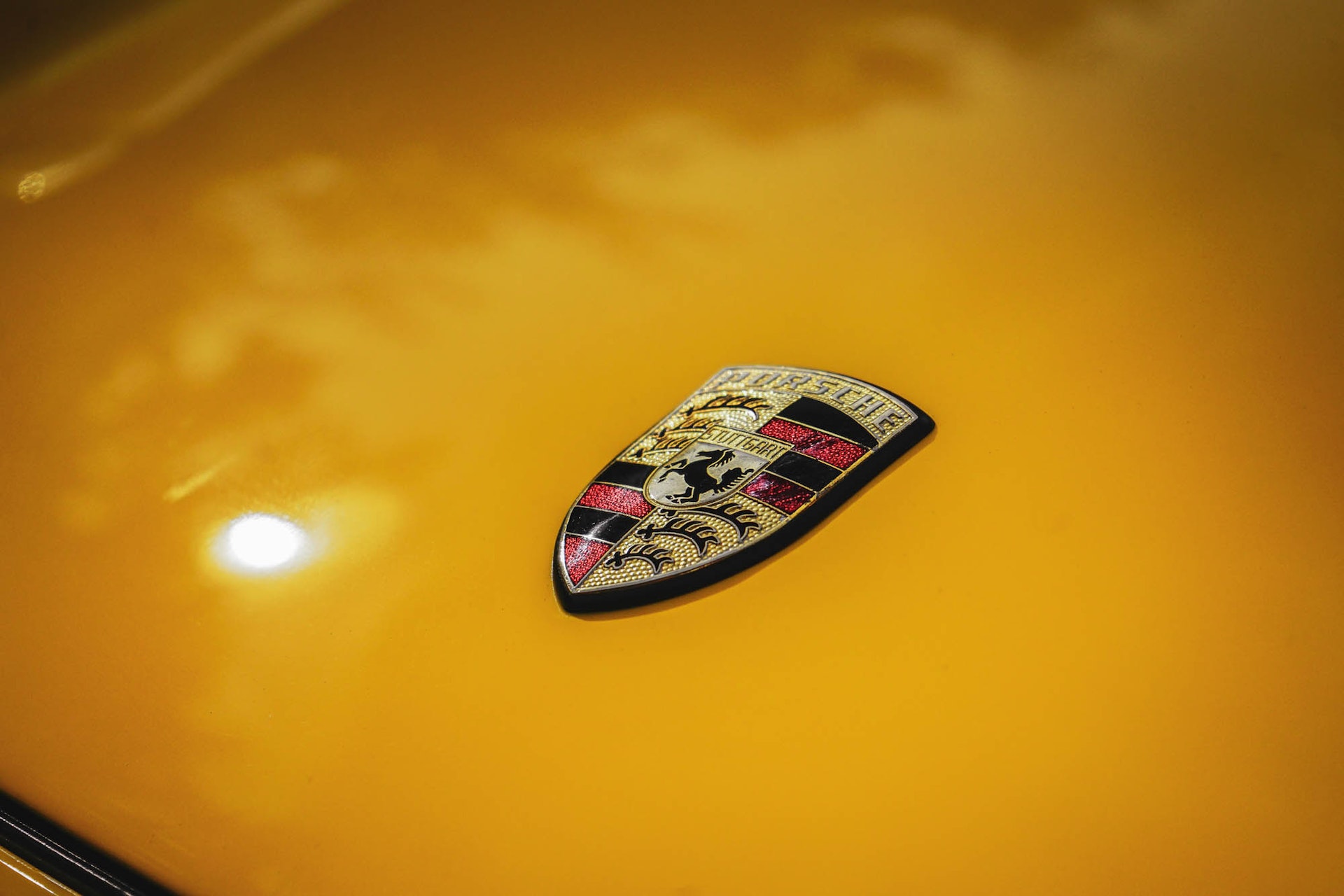 All of the exterior trim is in very good order, and the door jambs, bonnet and boot shuts are all in great condition. The car sits on 18-inch Porsche RS Speedline alloy wheels, shod in Michelin tyres. As the car has been used and enjoyed as intended, the wheels do have some minor scratches and kerb marks. 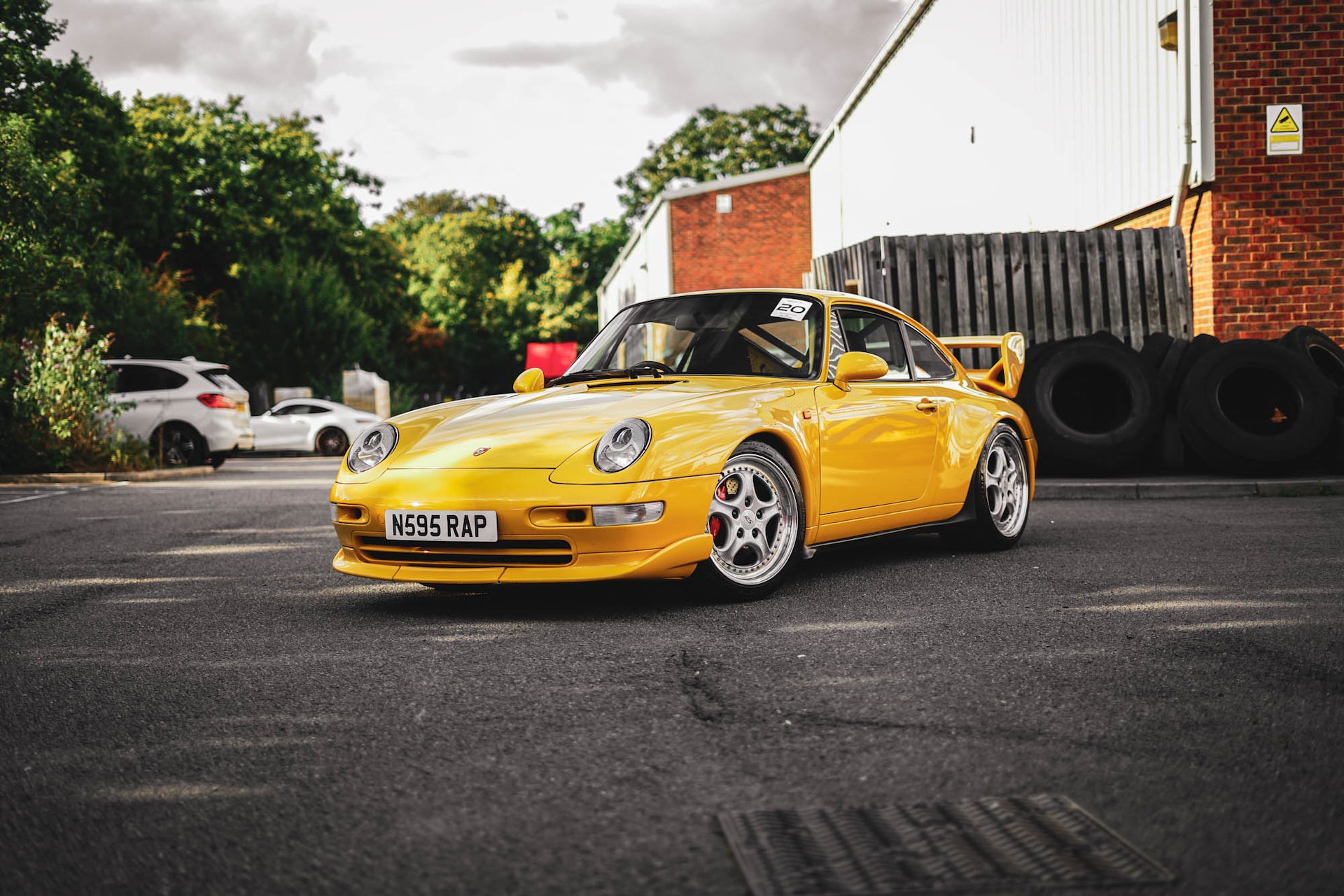 Inside, the car’s cabin is in good condition and shows only moderate signs of use. The seats are in excellent order, with very slight sun fade in some spots, while the Schroth harness belts are like new. The gear knob finish is worn from use, and there are a few scuffs on the roll cage — both evidencing its spirited use by a true enthusiast.This car starts, runs and drives superbly, with Richard describing it during his ownership as “utterly intoxicating to drive and devastatingly rapid at the same time”. The last MOT test was in July 2019 at 79,455 miles, which resulted in a clean pass with no advisories or warnings. The car was also recently serviced by Porsche specialist Nine Excellence in Horley, with works including an oil service and replacing the toe control arms, wheel bearings, and steering rack and joint gaiters. 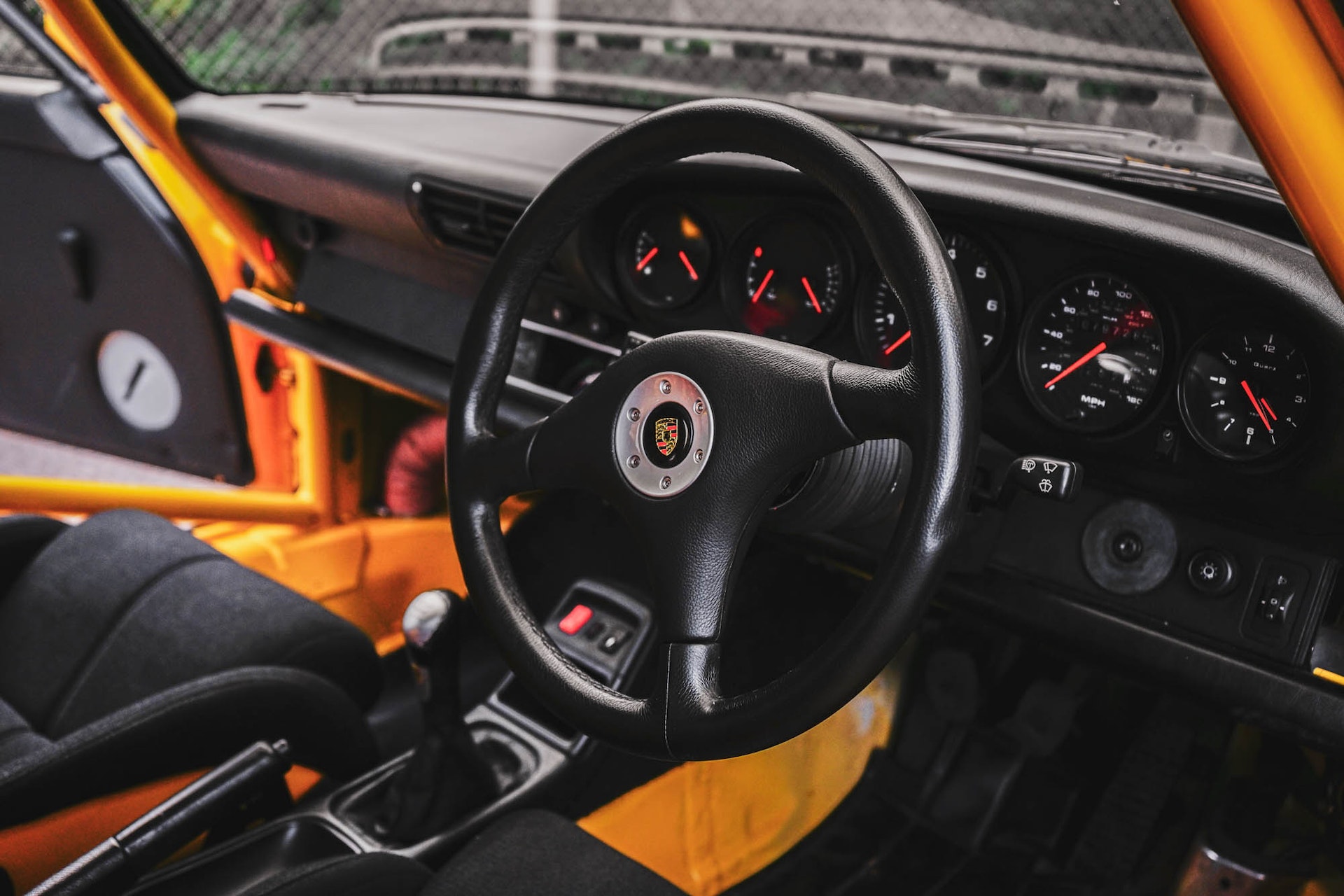 Prior to the vendor purchasing the car, it was fully serviced by GT One in Chertsey, which included renewal of the front brake discs and pads. Mechanically, this car is every bit a 3.8 RS Clubsport, with just the missing battery cut off and vacuum-assisted brake setup in the front boot hinting at the car’s original specification. 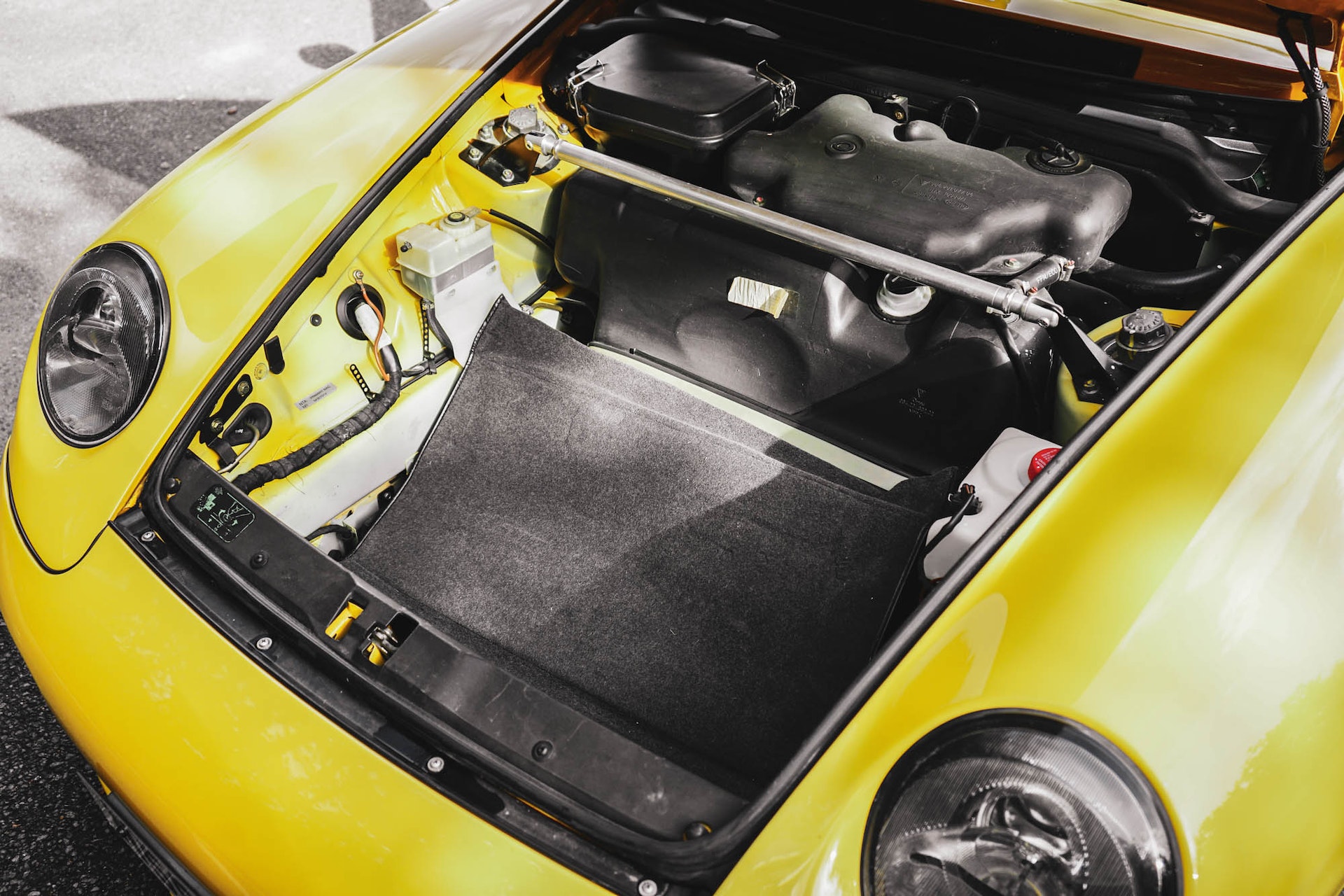 Accompanied by two sets of keys, an immobiliser fob, original handbook, service book and wallet, as well as an extensive history file filled with invoices dating back to 1996, this Porsche RS Clubsport 3.8 Recreation is a very well-known example that boasts astonishing attention to detail. It’s certain to draw a lot of attention, and thrill its driver, wherever it goes.