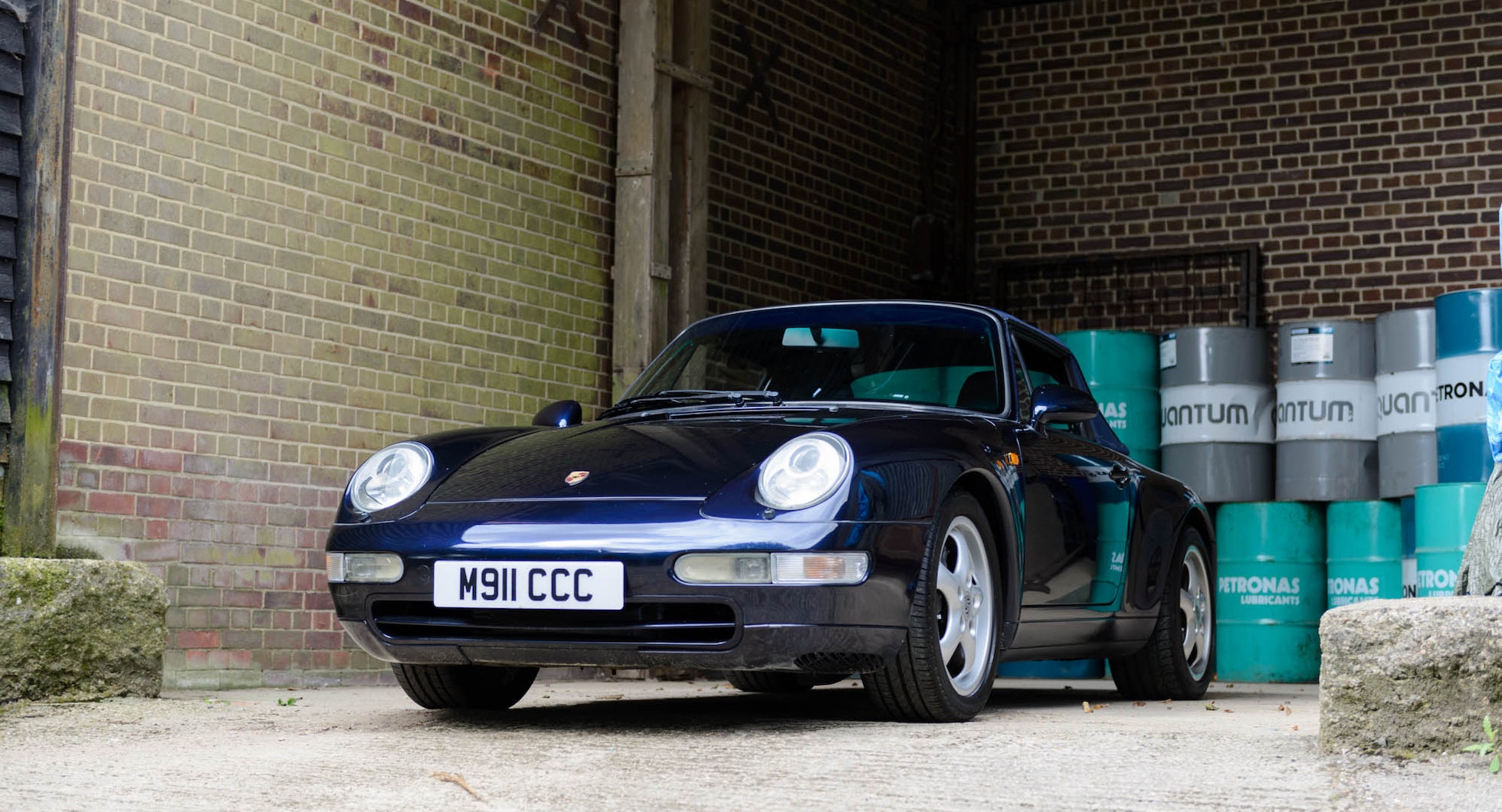 This 1995 Porsche 993 Carrera Cabriolet is a handsome and well-specified example of the last air-cooled 911 model, which is now in need of some care and attention. It is powered by the 3.6-litre naturally-aspirated flat-six engine, and driven through a six-speed manual transmission. The mileage readout is not warranted, but the car has covered around 140,000 miles from new. 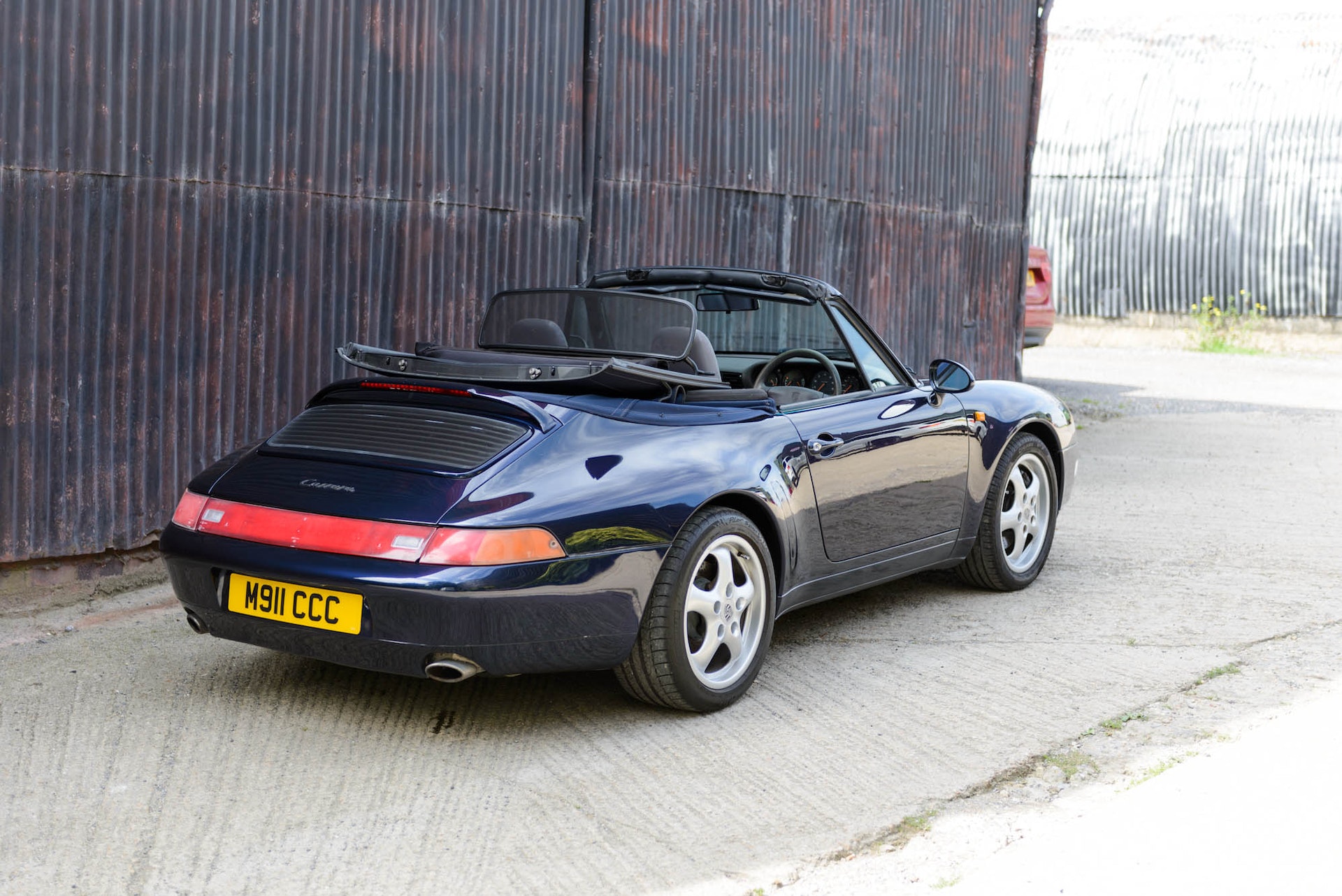 The car was delivered to its first owner on 5 April 1995 via main dealer Merlin Cambria in Cardiff, and there are four previous keepers on the logbook. Its stamped service history records lifetime maintenance from well-known businesses including official main dealers, renowned engineer Bob Watson, and Porsche specialist Maundrell. While it is in perfectly serviceable condition, the car is cosmetically tired and would benefit in the longer term from rejuvenation to both the paintwork and the interior. 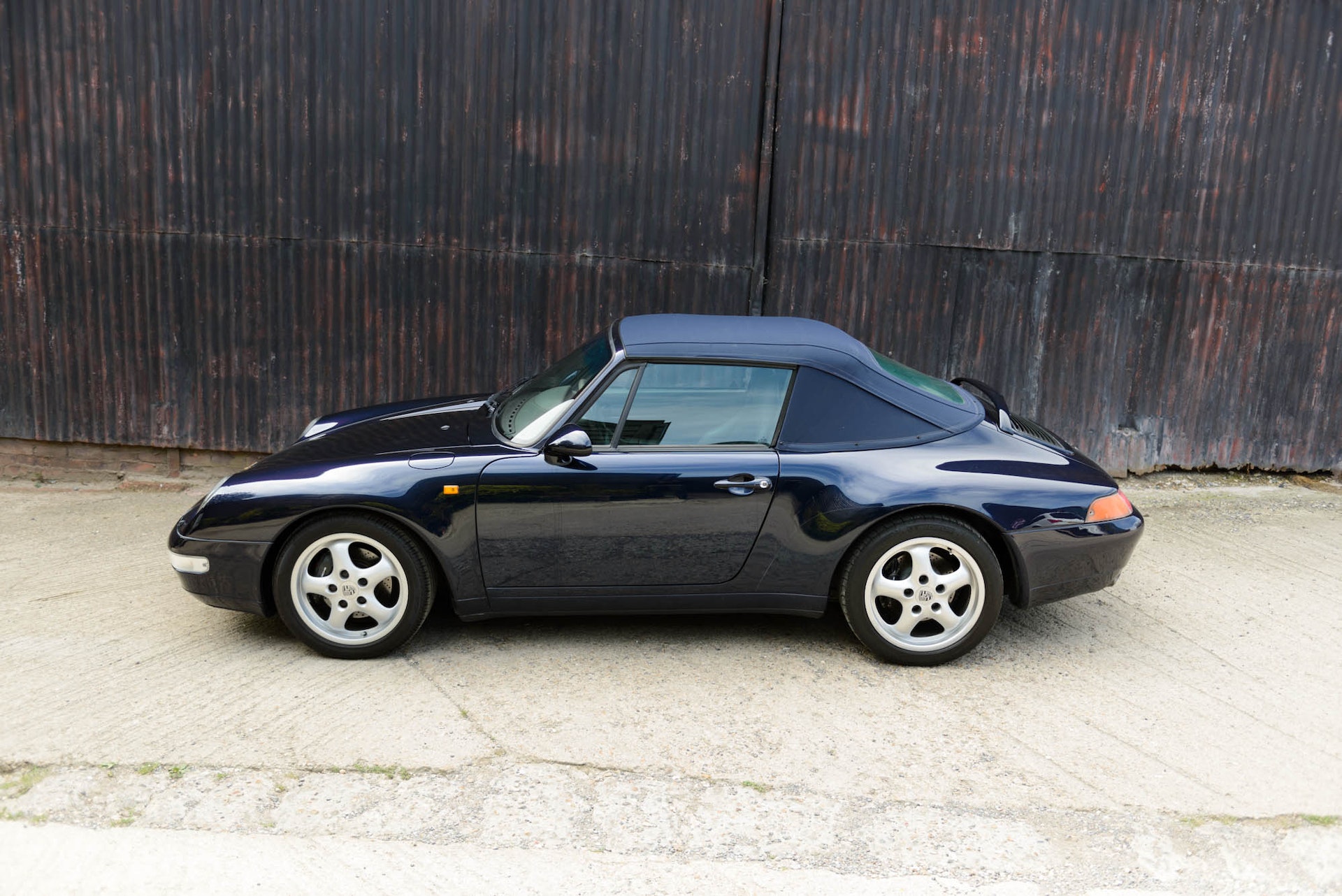 Its Midnight Blue metallic paintwork has had various touch-ups over the years, and is believed to have had a respray to both the front bumper and bonnet to rectify stone chips in the past. The condition is respectable given the age and mileage, with chipped paint in a few places and some bubbling below the windscreen on the nearside of the car. 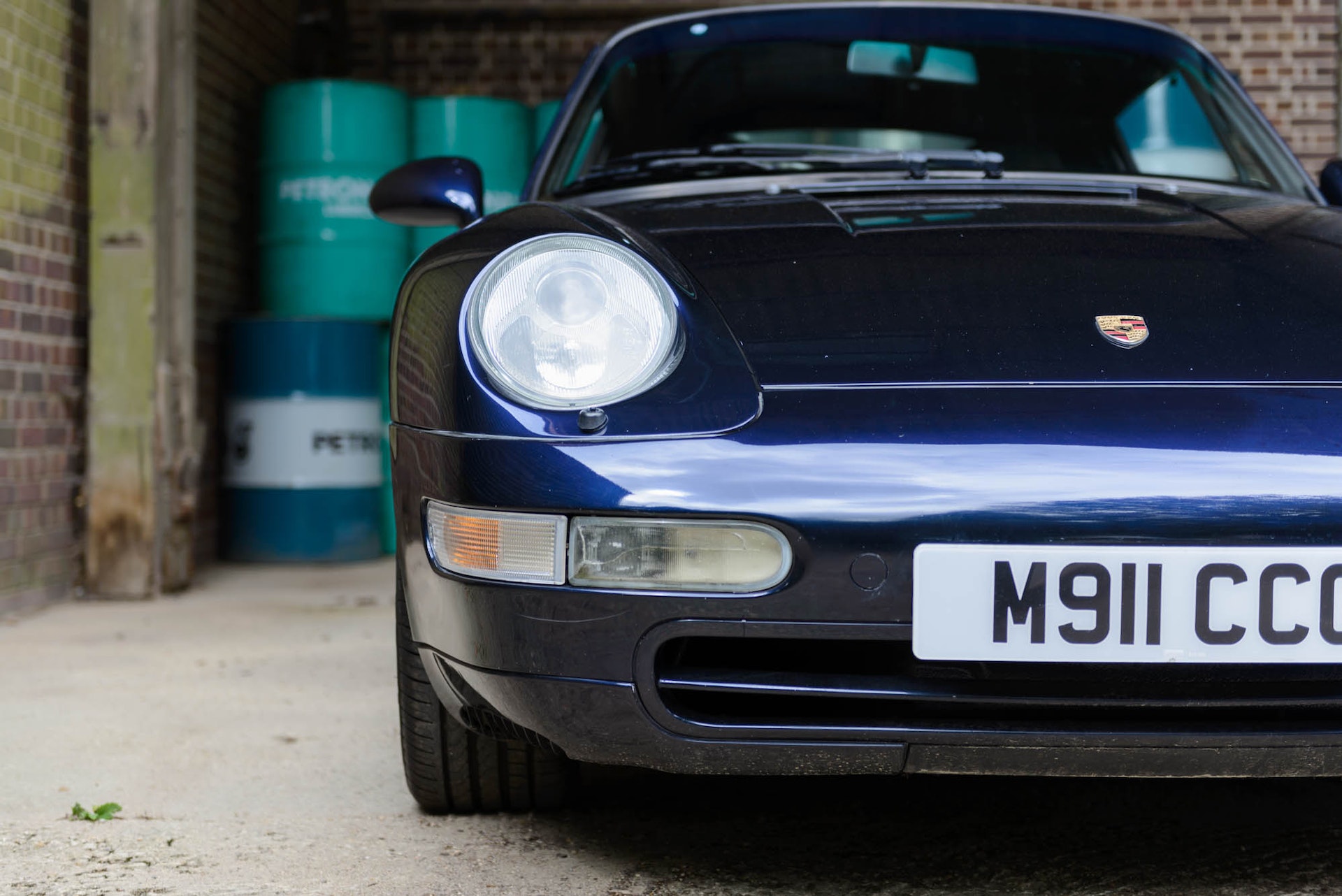 Both sides of the car have clear stone guard film on the leading edges of the rear wheel arches. While the gaskets and seals are complete, some sections would benefit from replacement - such as around the door shuts and exterior handles. The black exterior plastic trim is faded in places, but there are no missing parts. 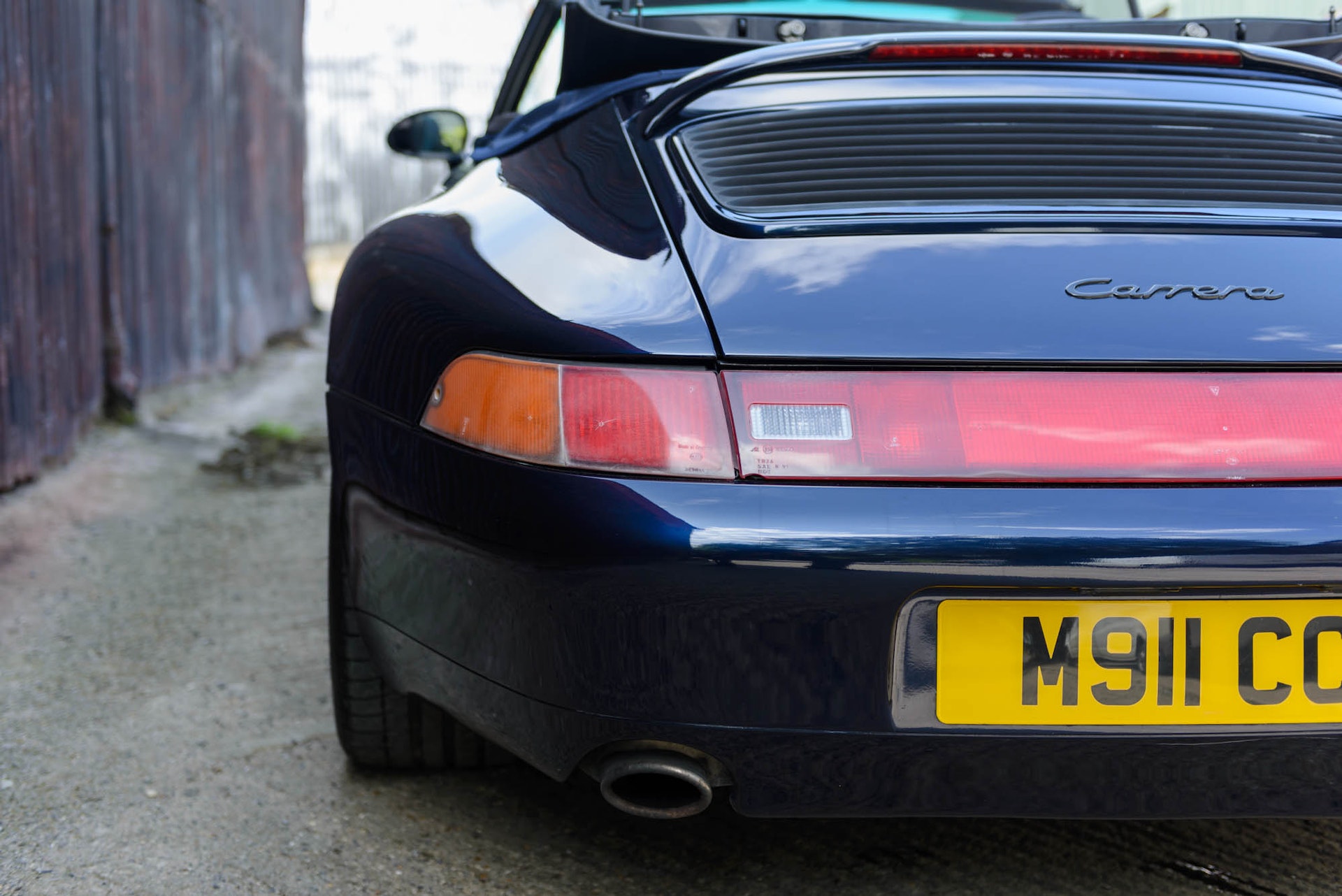 At the rear, the decklid features an aerofoil with integrated high-level brake light. The rear reflector strip is chipped on three of the corners, but is otherwise undamaged. There are a few small cracks in other light lenses around the car.

It sits on a set of 17-inch Porsche ‘Cup 2’ alloys, which present very well, with only a few minor blemishes and a kerb scuff on the offside rear wheel. The mid-blue hood is in good order. Its colour is slightly faded, but the folding mechanism works as it should and the headlining is sound. 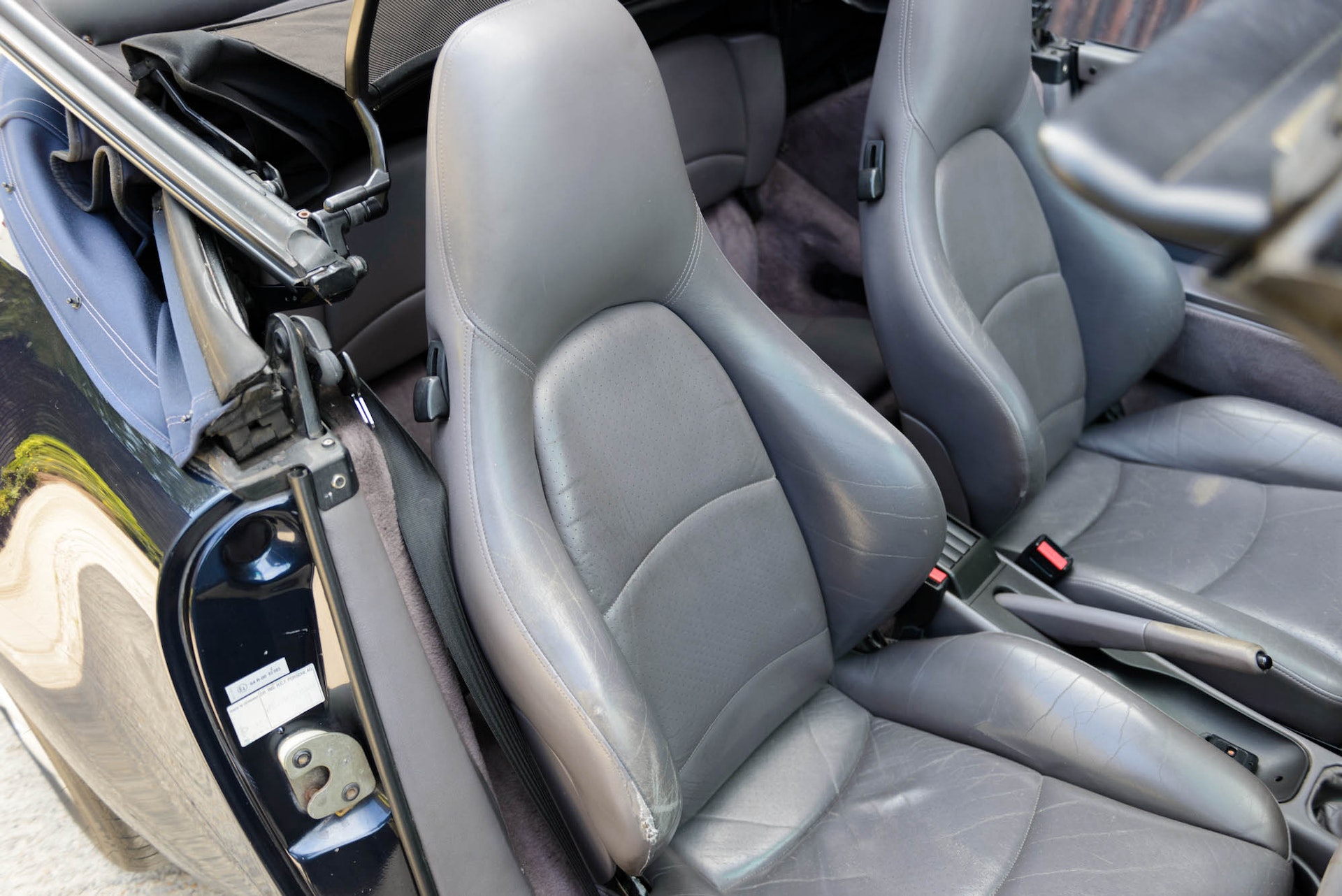 Inside, the grey leather upholstery is in fair condition. The cabin features the optional Sport seats with deeper bolsters and perforated centre panels. They are visibly worn and discoloured, with some cracking and a few areas of damage to the leather and piping. On the passenger seat base, one section of the squab has lost its colour. 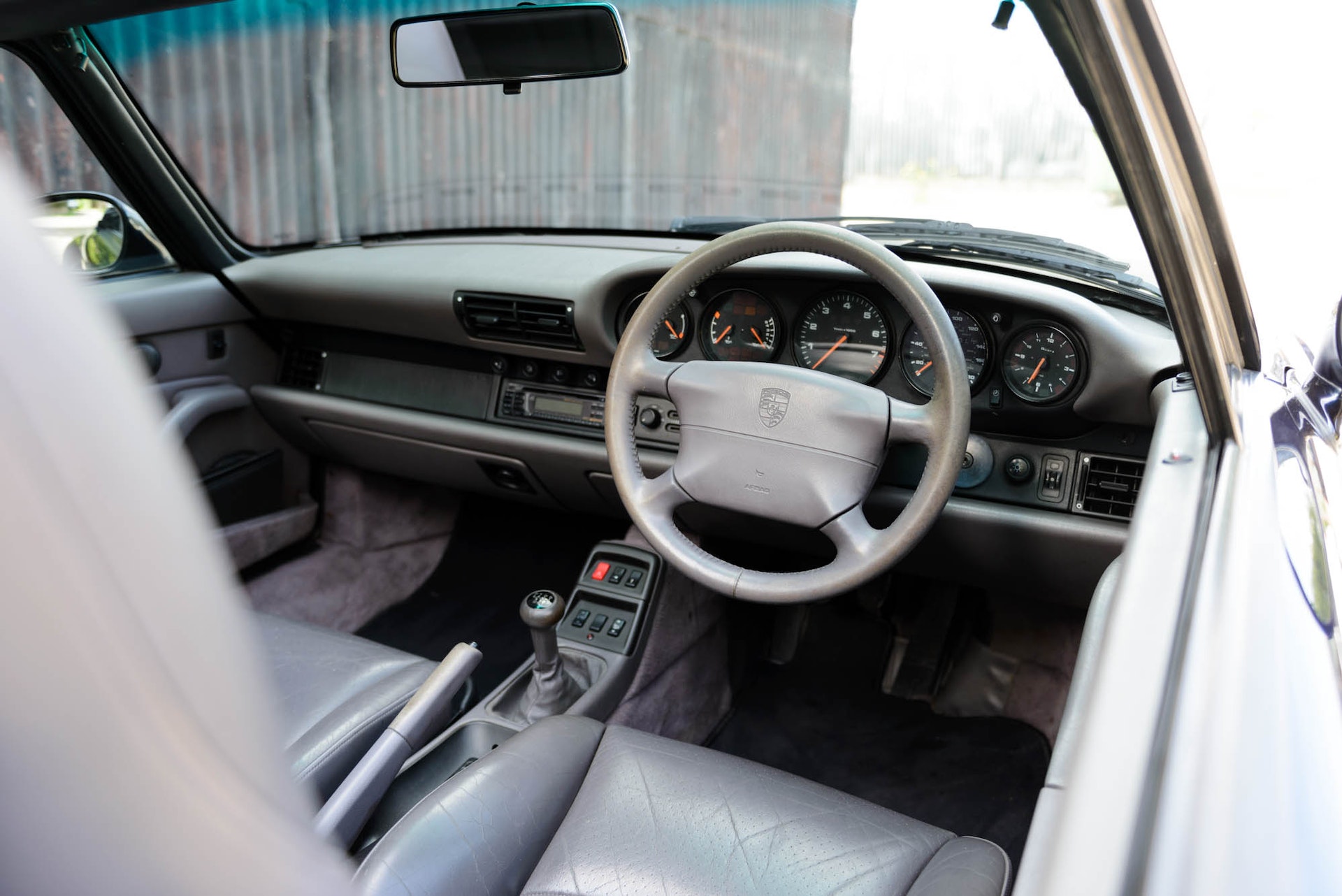 The steering wheel and gear knob are both also well-worn, but - like the seat upholstery - could easily be improved by some professional re-colouring. An aftermarket Sony stereo head unit and CD player is fitted in the dashboard, alongside the original climate control unit. 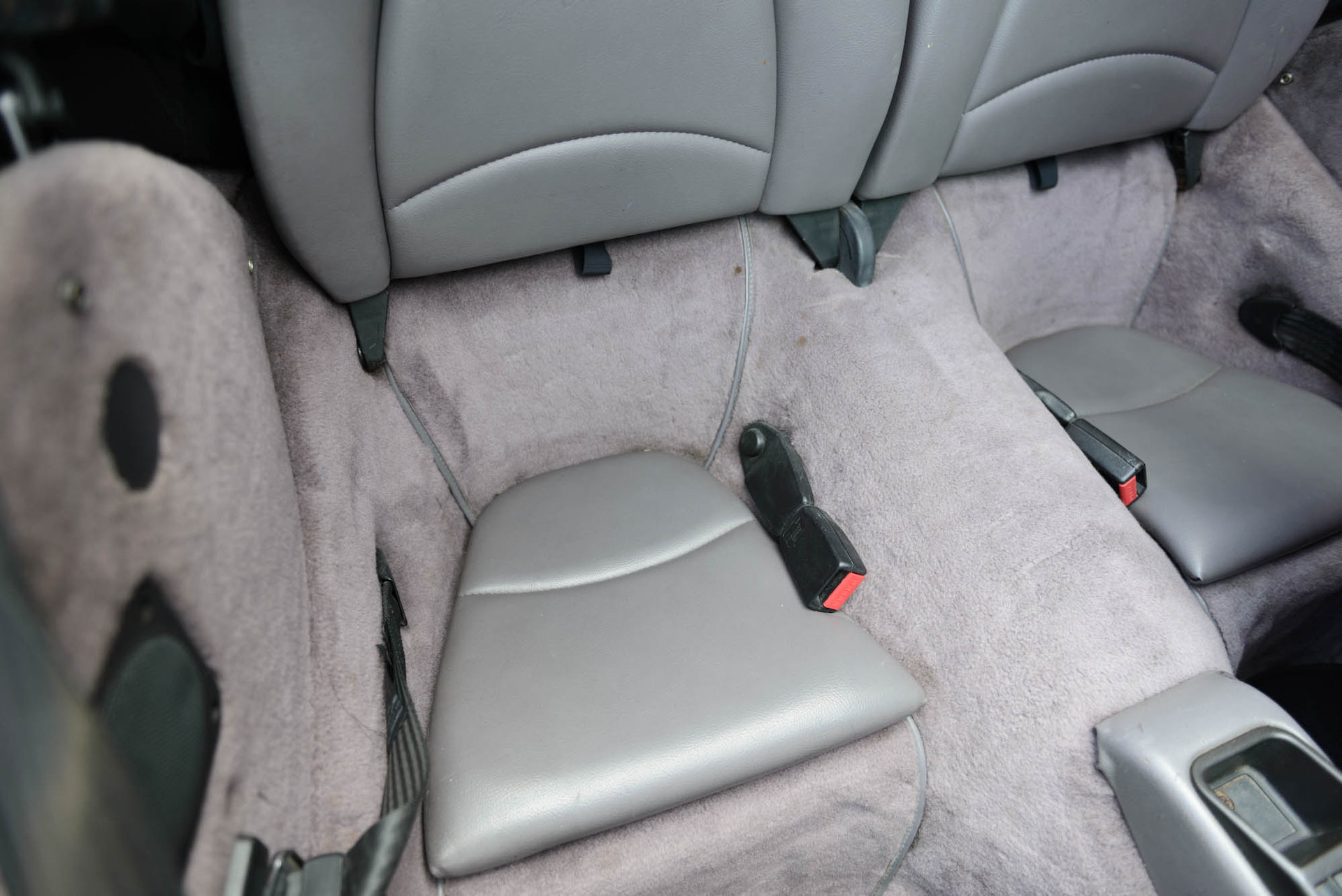 There are a few spot stains on the carpeting, but it is otherwise in good order, and has black Porsche overmats in place at the front. The rear seats are in very presentable condition. 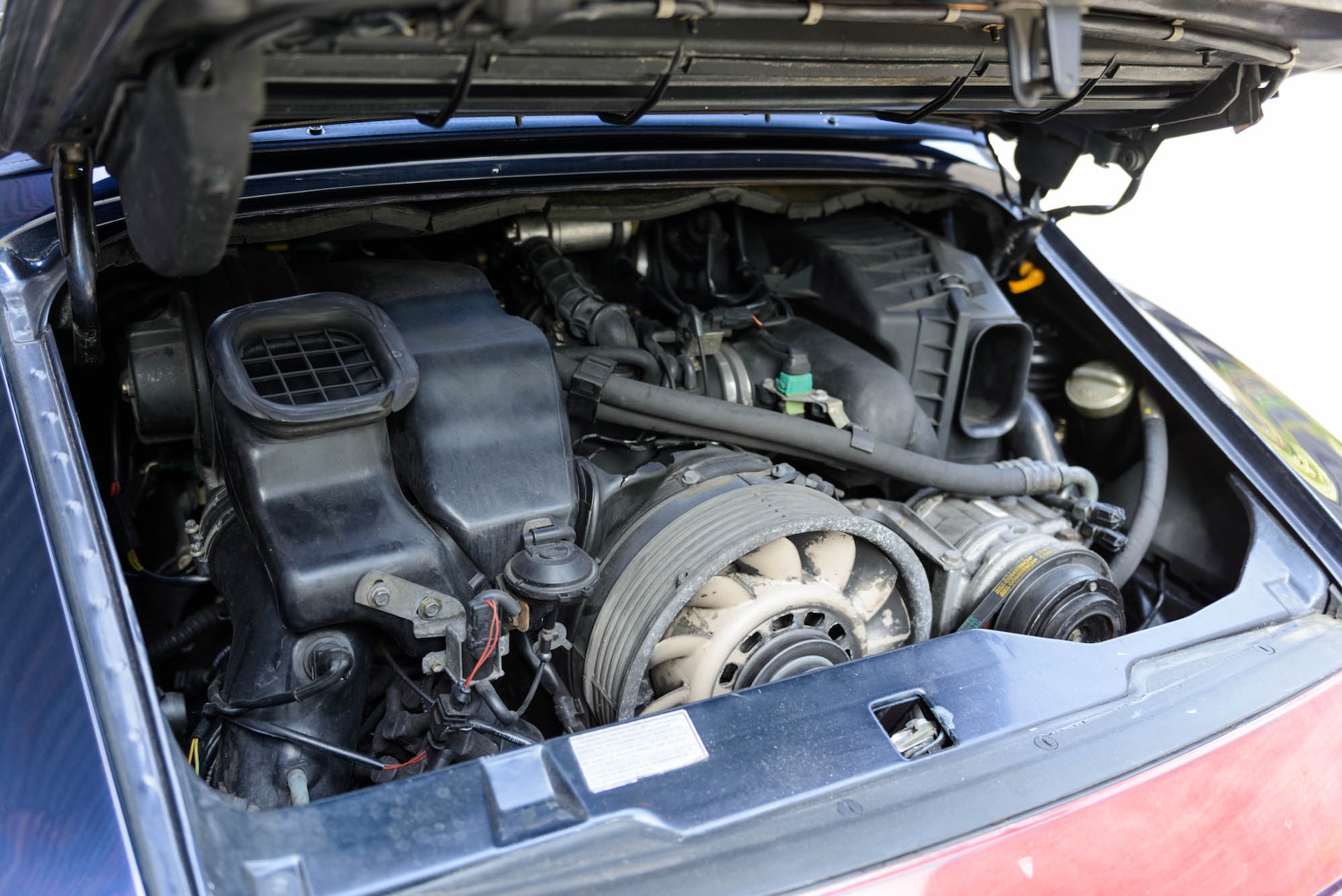 Its last scheduled maintenance was in June 2018, which included a full service as well as attention to the brakes. The brake fluid was last renewed in March 2015, when it was serviced by Porsche specialist Maundrell in Oxfordshire. 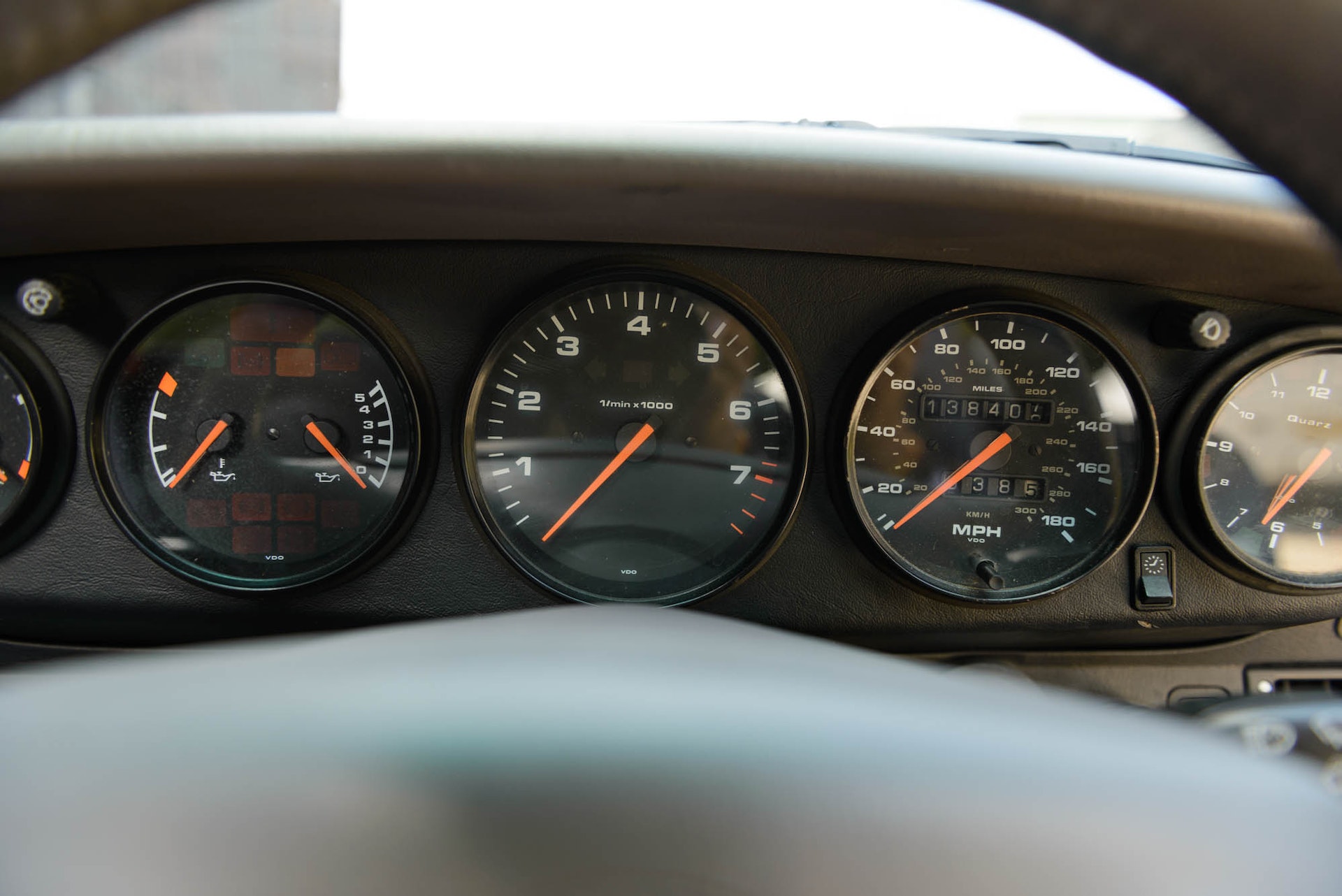 Around five years ago, the odometer stopped working. It has been driven only sparingly since then, but the current mileage readout is therefore not accurate. The speedometer also has intermittent issues when the reading fails, which could be a problem with the sender or may perhaps require a complete new instrument unit. 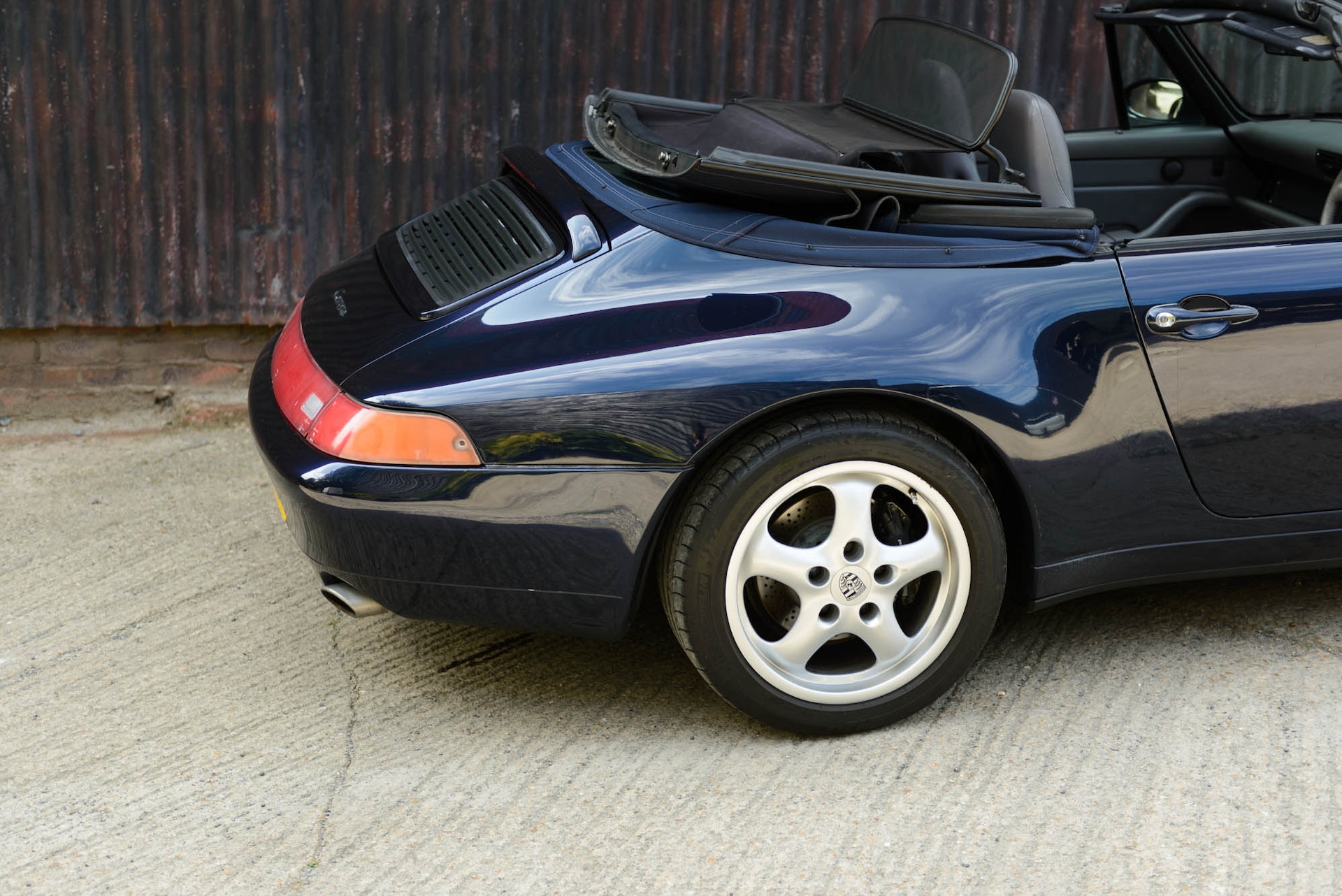 The last MOT test was in May 2018, which resulted in a clean pass with no advisories. It is not currently covered by a valid certificate, but there are no functional issues noted by the vendor beyond the faulty gauge. The wheels are shod in Pirelli Cinturato P7 on the front axle in size 205/50 R17 and Michelin Pilot Sport on the rear axle in size 255/40 ZR17. All of the tyres have around 3mm of tread remaining. 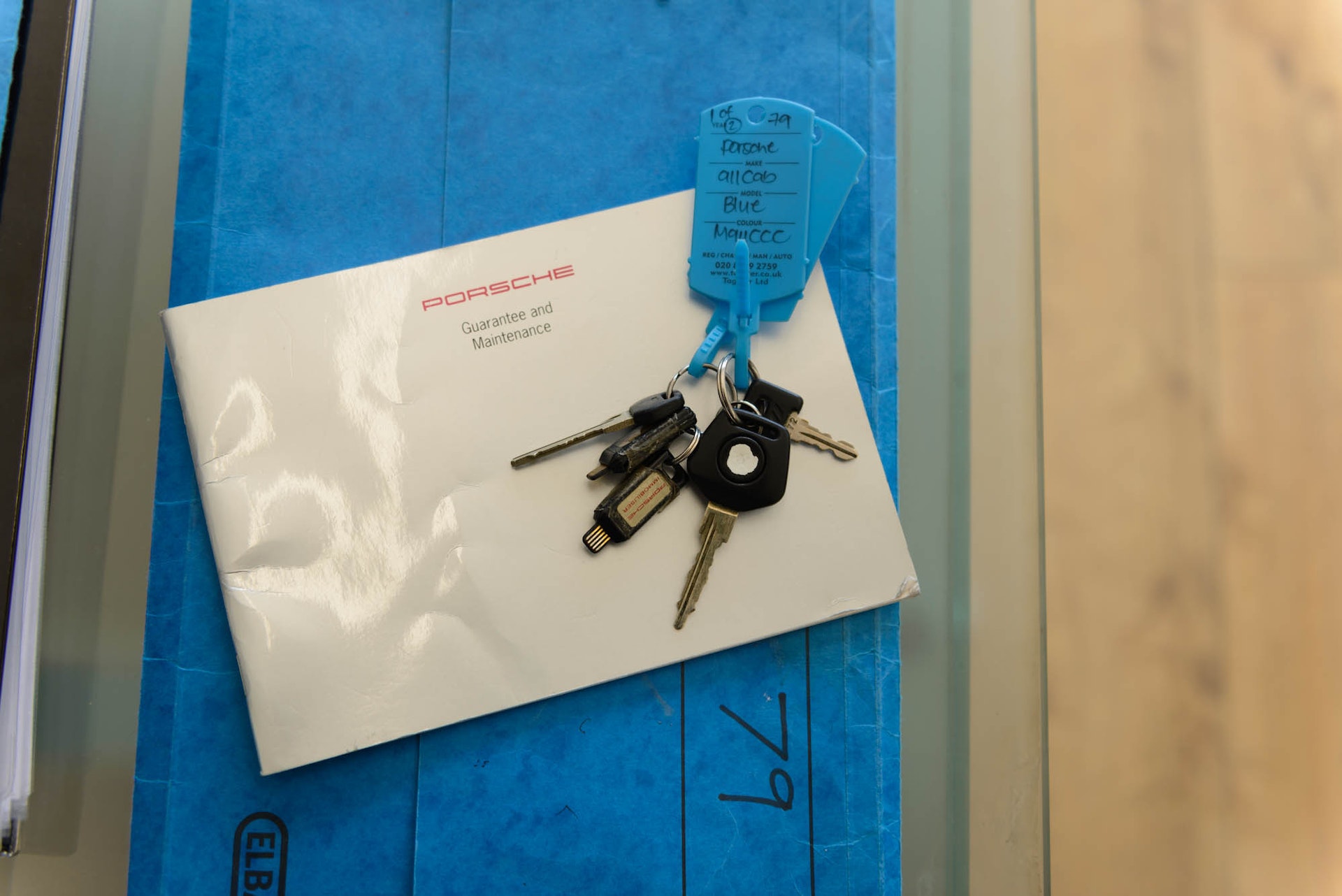 Accompanying the car is a replacement service record with 15 stamps in the booklet, various invoices covering more recent years, and two keys with two immobiliser fobs. In the boot is the space-saver spare wheel, tool kit and jack. 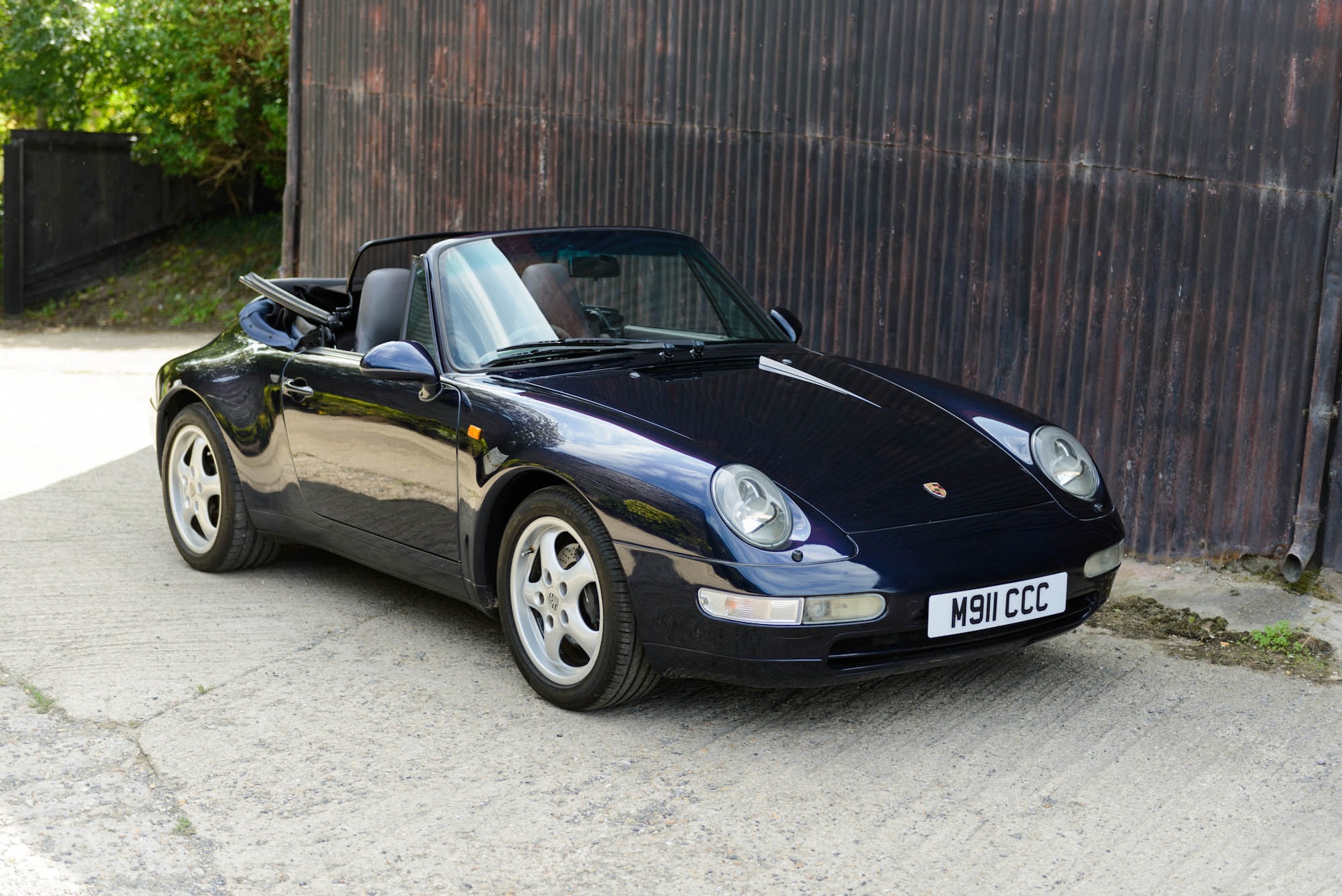 This Porsche 993 Carrera Cabriolet is an appealing air-cooled 911 model, which benefits from a smart factory colour combination and being equipped with the desirable six-speed manual gearbox. It is presented honestly as needing some obvious attention and refurbishment, but could make a perfect modern classic project car for the right enthusiast.