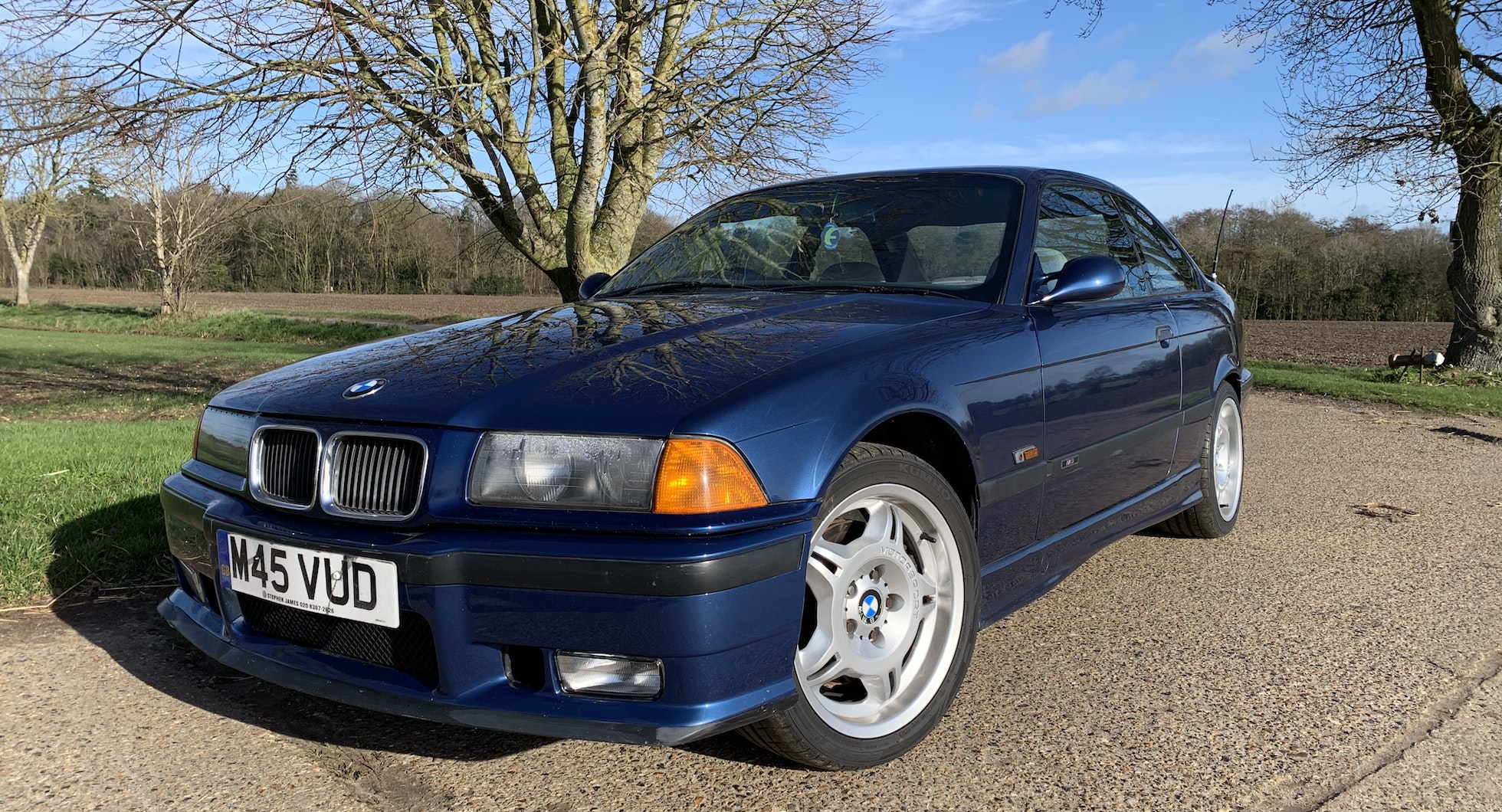 This 1995 BMW M3 (E36) Coupe is one of the definitive ‘everyman’ performance cars of its generation, presented in very smart condition. It is powered by the 282bhp version of the 3.0-litre S50 straight-six engine, coupled to the five-speed manual transmission. The odometer indicates 93,268 miles from new. 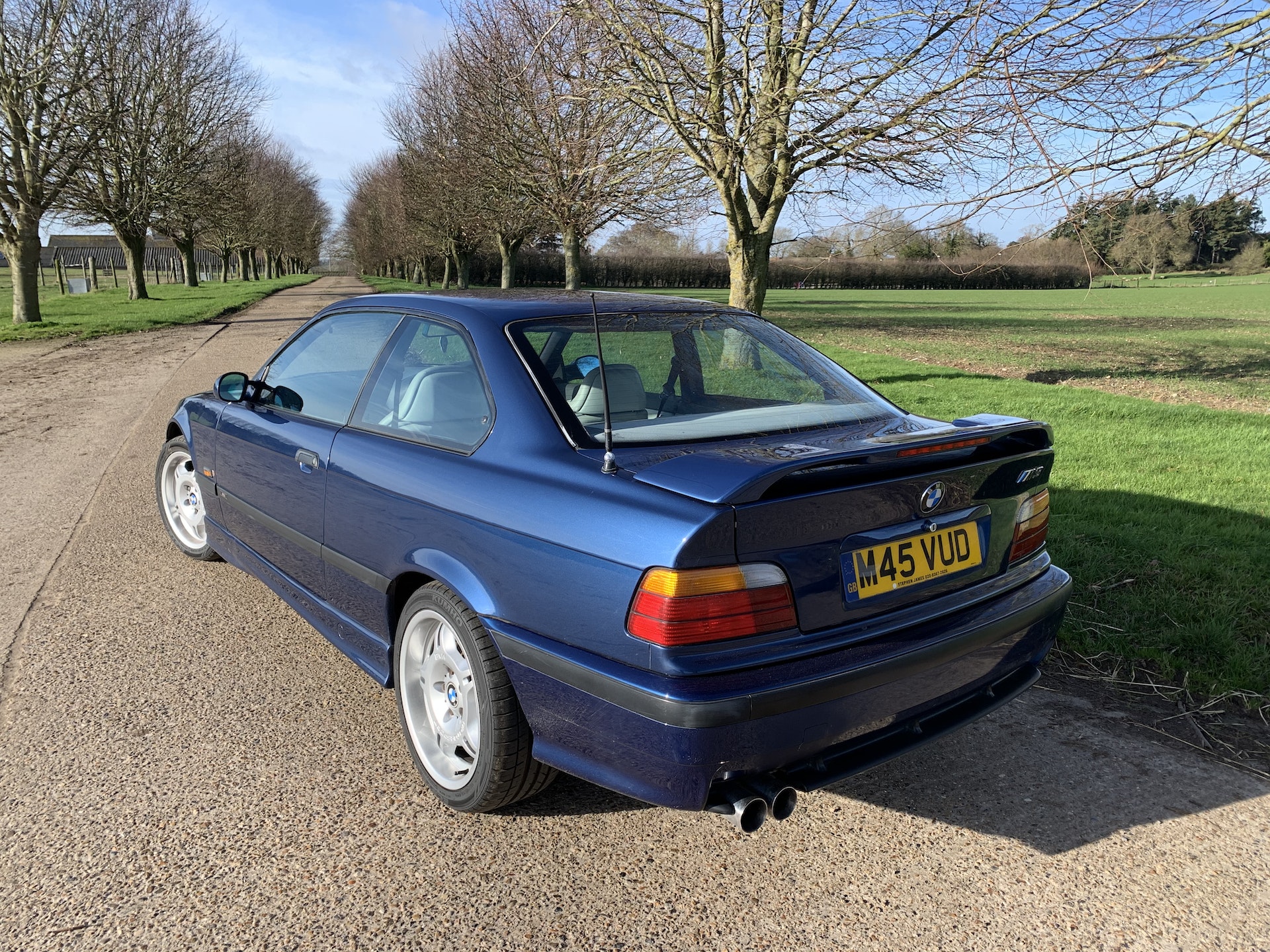 An original right-hand drive example, this M3 was completed at the factory in February 1995 and was delivered new to the UK. It was registered just one month later and supplied to its first corporate owner via Stephen James BMW in London. Its first private keeper acquired the car in March 2001, and kept it until 2019, when it was acquired by the current trade owner. 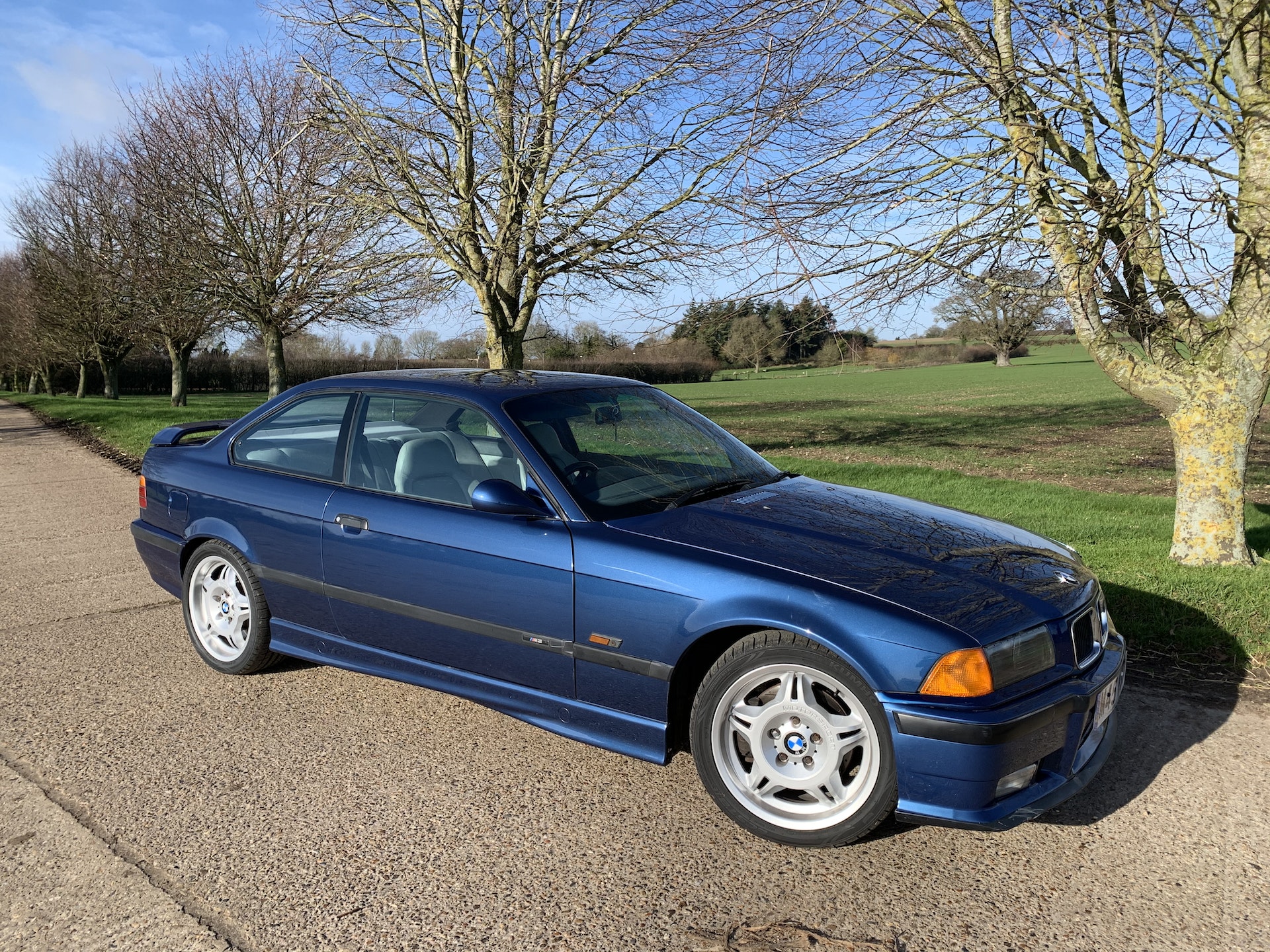 The exterior of this E36 M3 is in great condition, finished in the original and handsome factory colour of metallic Avus Blue. There are a couple of small stone chips to the offside wing mirror, as well as minor chips to the front end as well. There is also a scuffed section of the front splitter on the offside front. Other than that, it presents very smartly indeed, with a smooth and glossy appearance around the body panels. The nearside rear quarter, front bumper and bonnet have been repainted in the past to rectify stone chips, but the paint on the other panels is believed to be original. 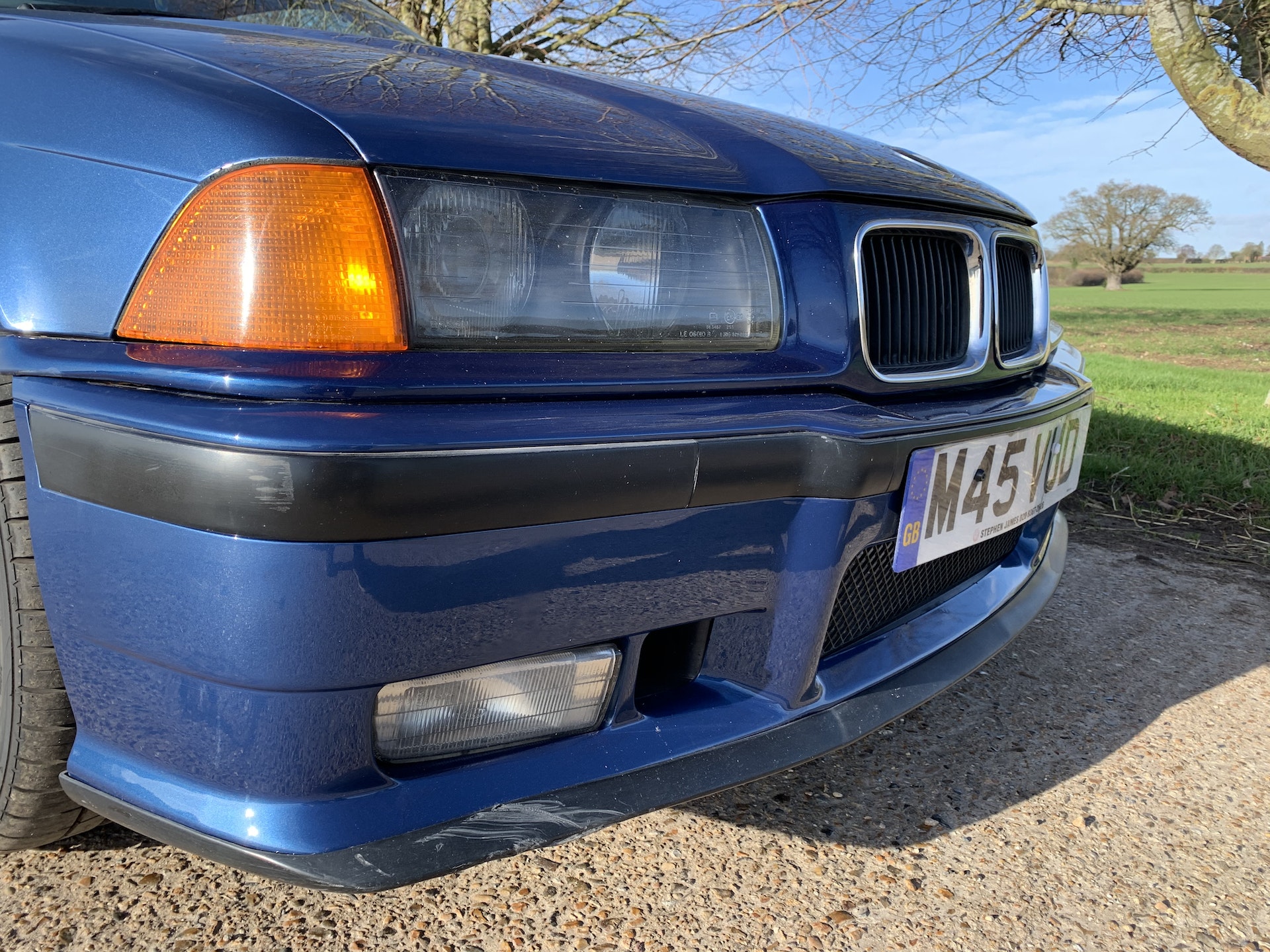 All of the window seals, light lenses and plastic trims are in good order, with no damage or cracks. The door shuts and sill covers are also in sound condition. Filling the wheel arches is the original set of 17-inch BMW Motorsport double-spoke alloy wheels, which are in great shape, showing only a minor scuff on the offside front rim, and a couple of small patches of bubbling in the paint near the valves. 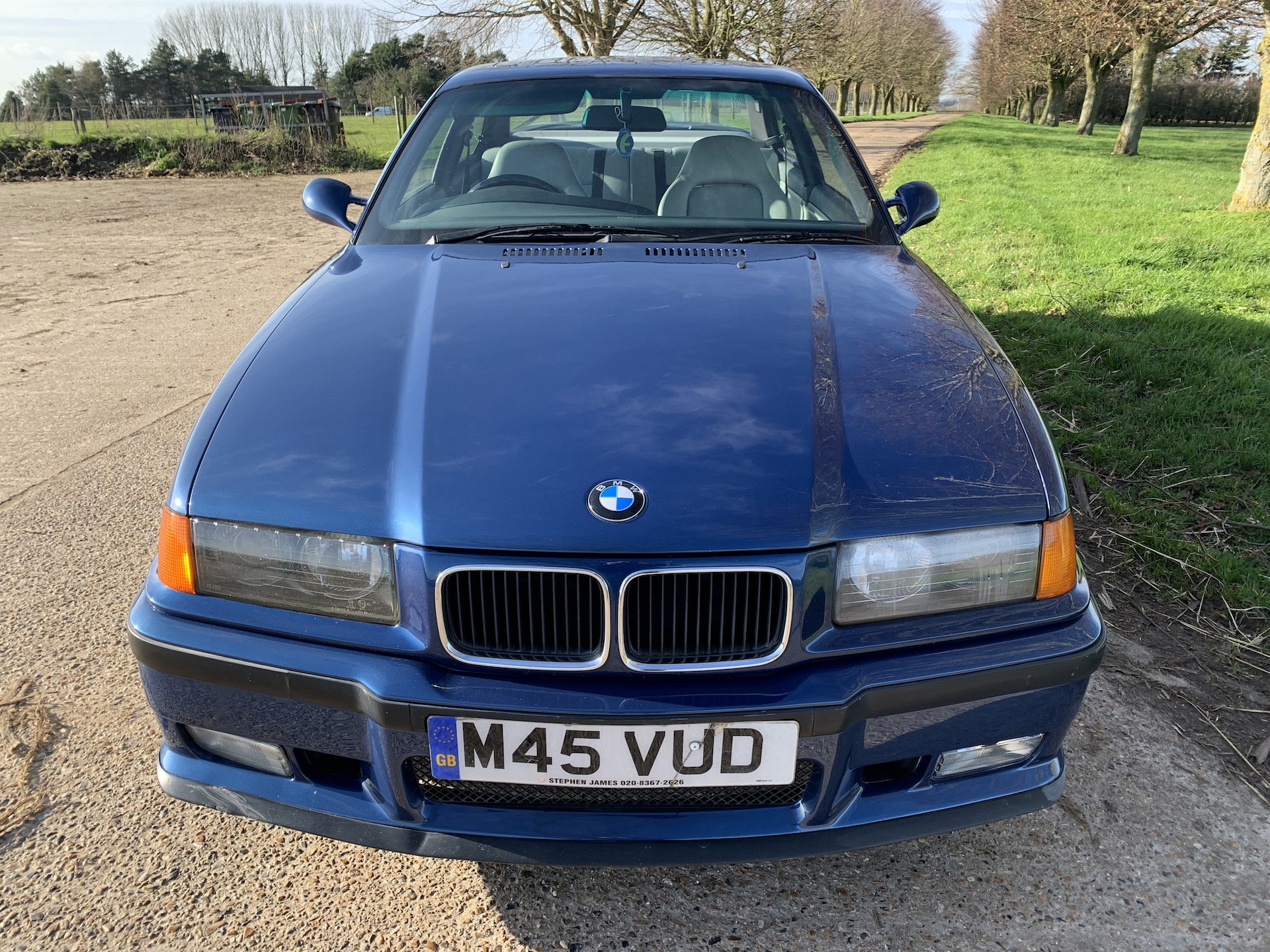 The cabin is equipped with a full leather interior, with the ‘Vader’ sport seats that were standard in the Coupe model. The Silver Grey upholstery does not appear to have any rips or holes, but there is surface cracking and discolouration of the finish in places. It would certainly benefit from a conditioning treatment and re-connolising to bring the interior up to the same standard as the exterior. 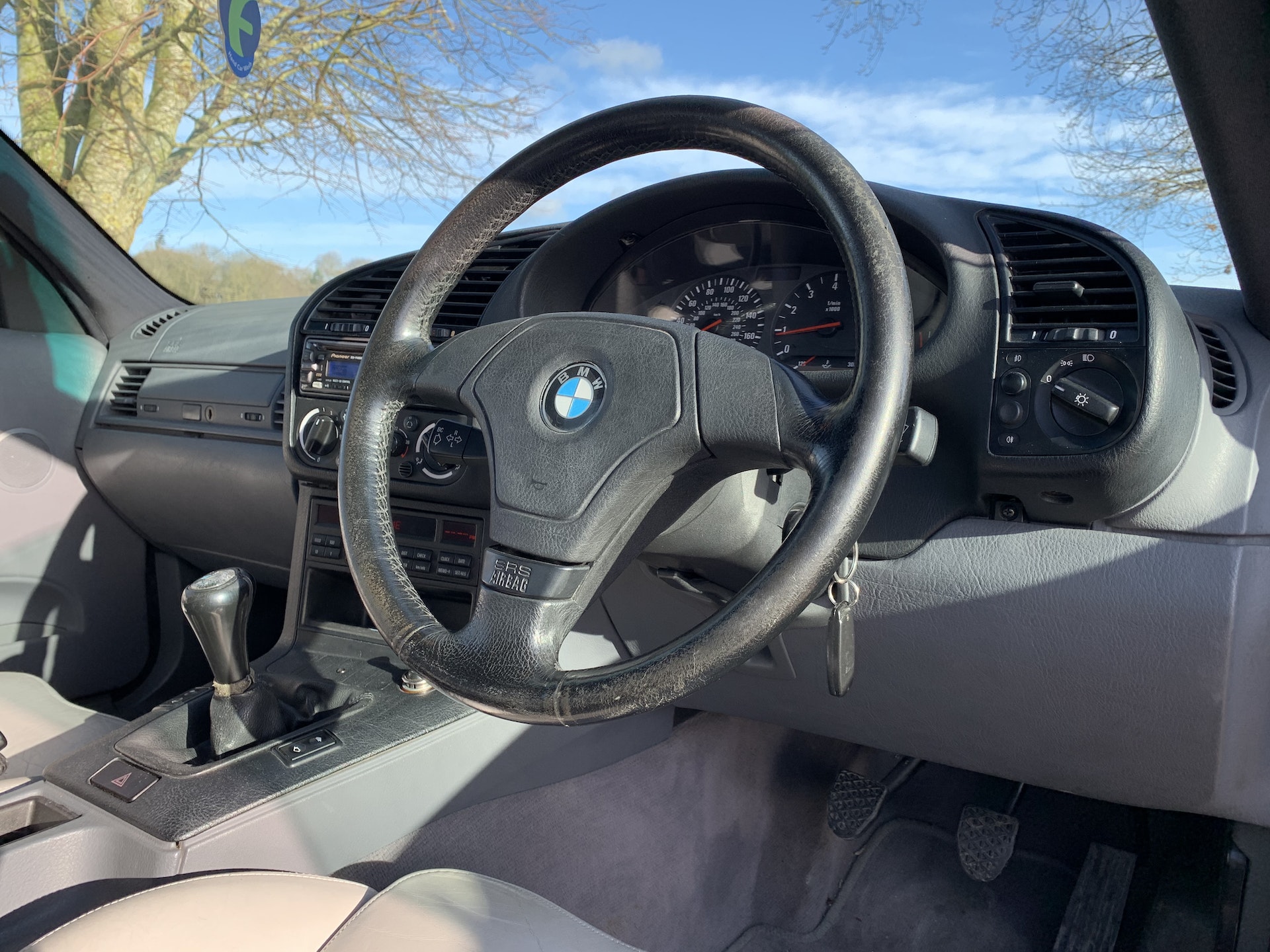 Ahead of the driver is the three-spoke leather steering wheel, and the gear knob is also original - both are visibly worn but still in serviceable condition. The factory-fitted equipment includes an electric tilt-and-slide sunroof panel as well as dual-zone climate control, and an aftermarket Pioneer stereo head unit with CD player is also installed. 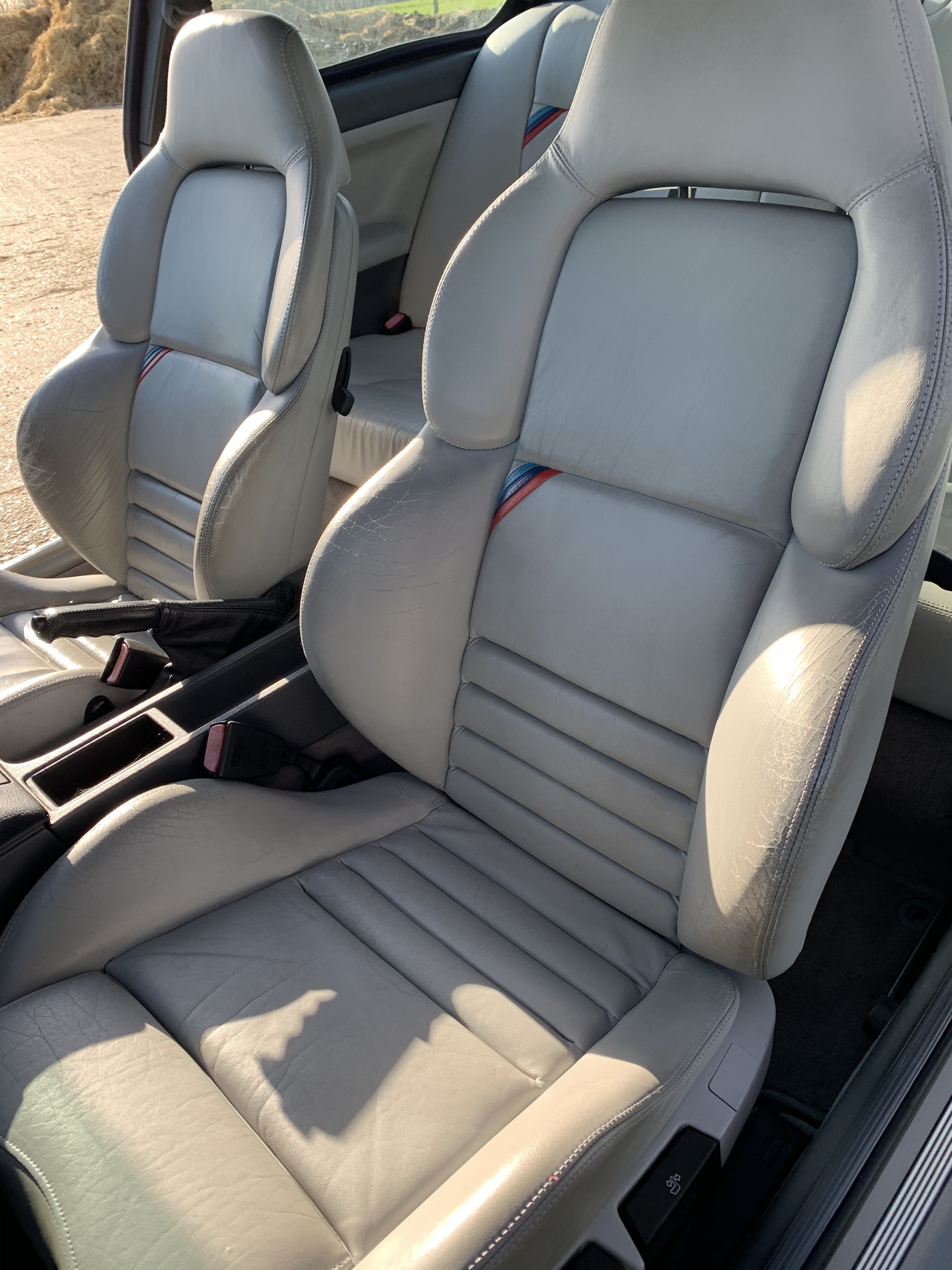 At the back of the car, the boot lining is in good condition, with no damage or stains. The tool kit in the fold-down storage panel also appears to be original and complete. There is a full-size matching spare wheel present, though it is chipped and scuffed, with paint and lacquer peel. 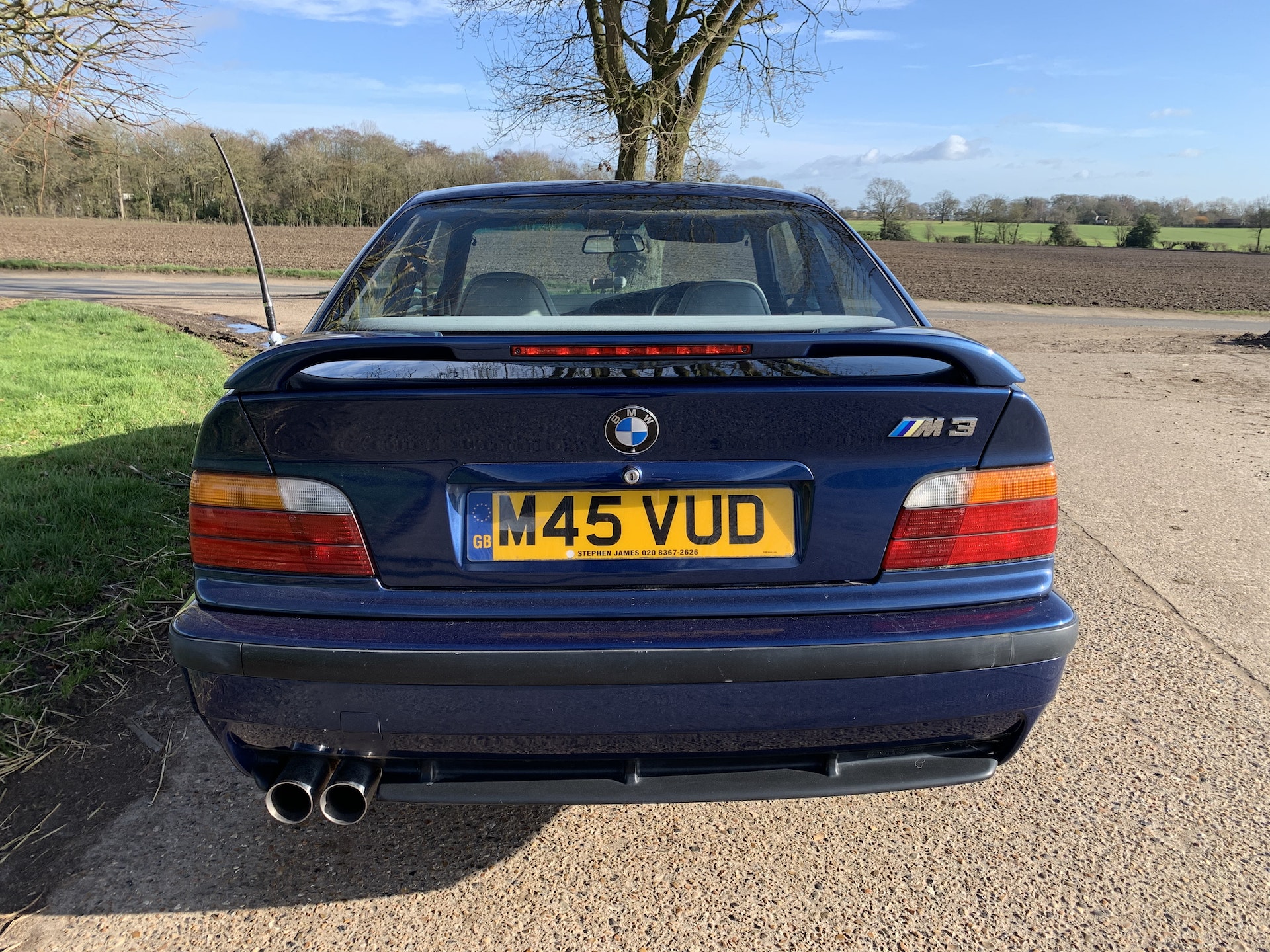 The vendor reports that this E36 M3 starts, runs and drives very smoothly, performing well on the road at speed, and pulling up confidently under braking. The stamped duplicate book confirms that the car had the important running-in service carried out at 1,725 miles in May 1995 at Ivor James BMW in Luton. It is understood that the former keeper kept the car in good mechanical order, though there are only a few invoices in the file. In 2012, a brand-new catalytic converter was installed, along with a replacement cat-back exhaust system. 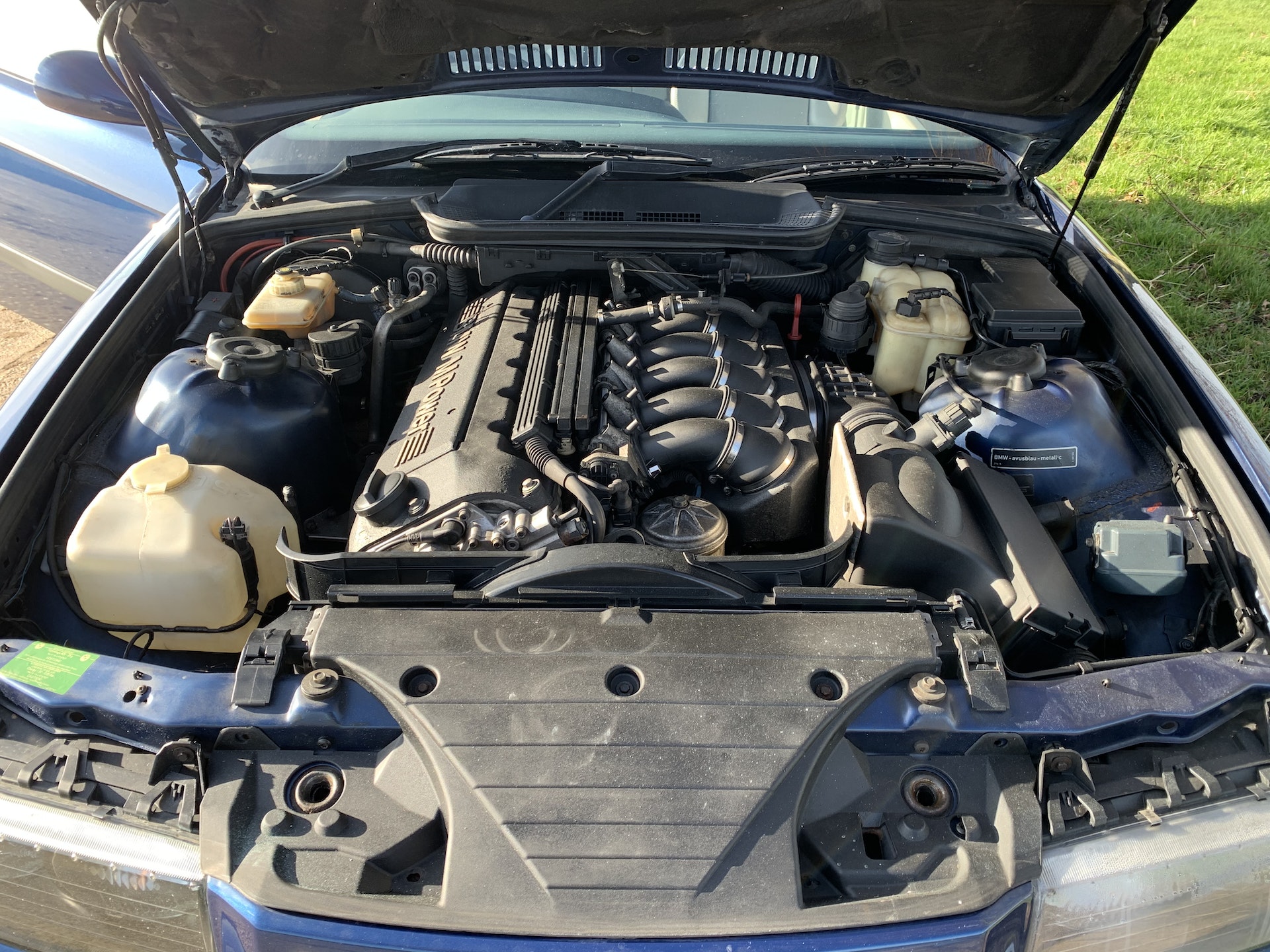 Its most recent MOT test was on 24 May 2019 at 93,142 miles, which resulted in a first-time pass, with only a handful of advisories regarding slight corrosion and seepage on the power steering hose, slight corrosion on the nearside front inner wing, underseal on the underside of the body, a non-excessive oil leak, and worn windscreen wipers. 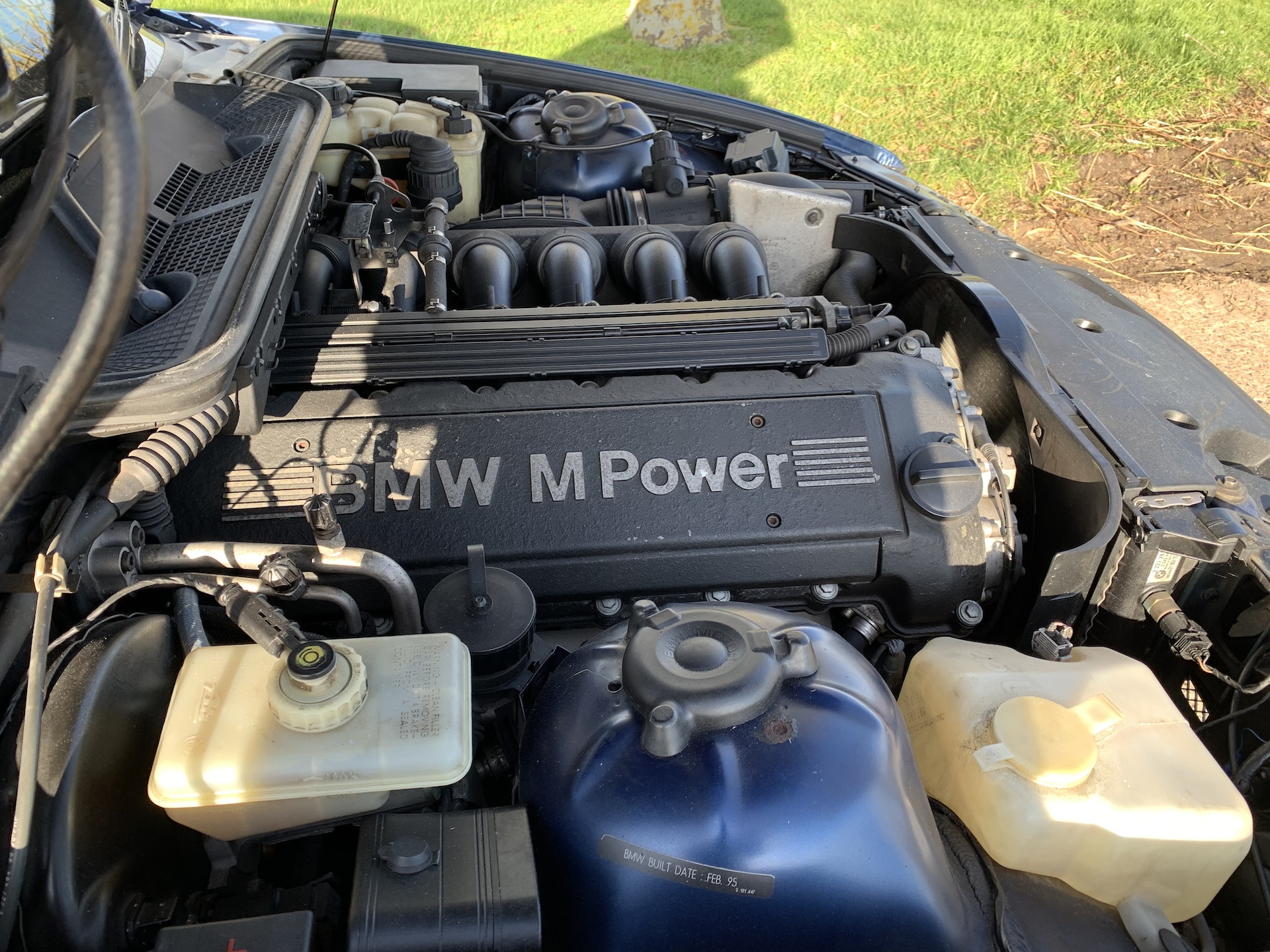 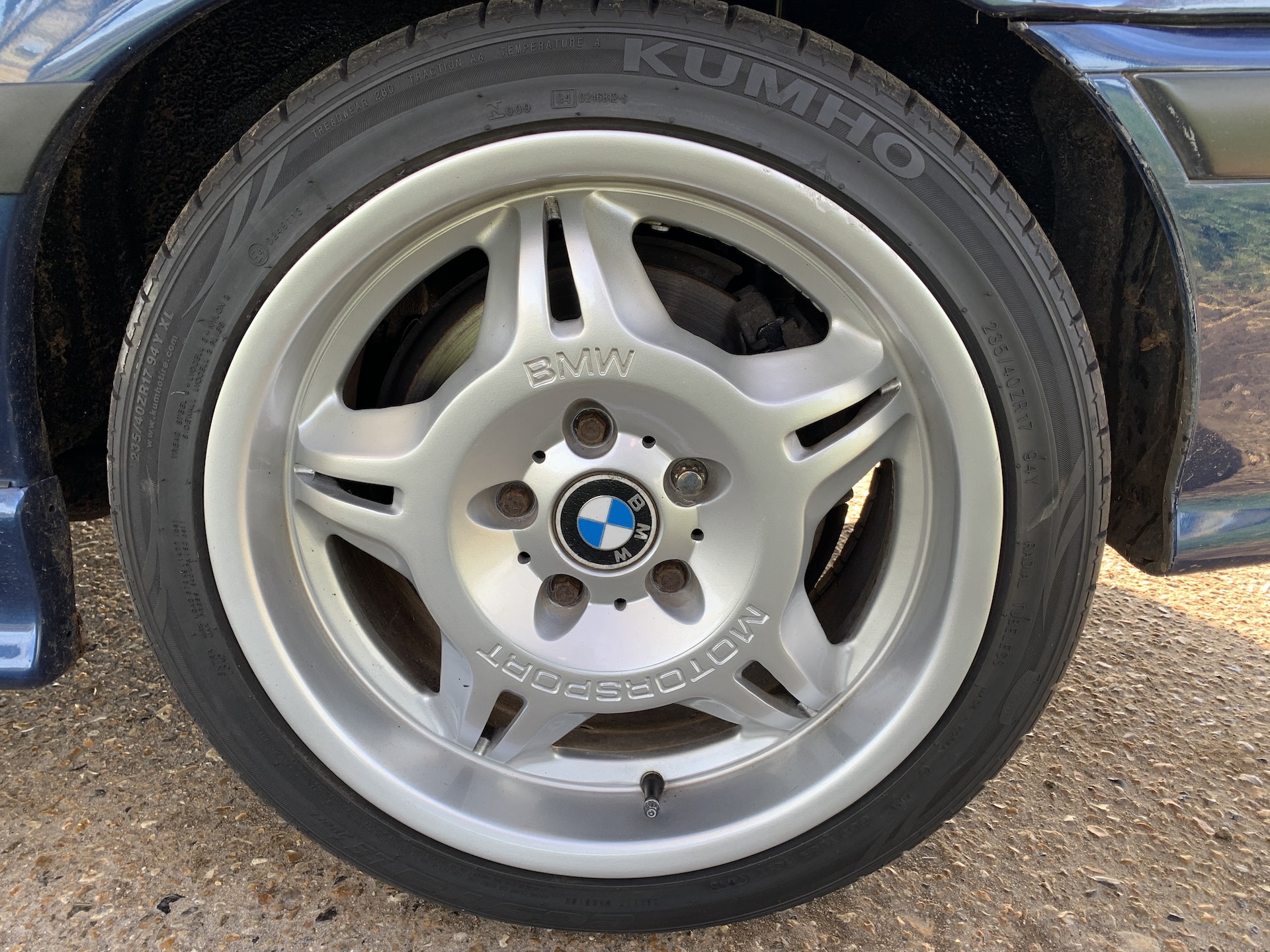 Accompanying the car is the owner’s manual and sales literature, though the second owner misplaced the original service book and had to order a duplicate from BMW. A handful of early stamps have been confirmed and added to the book so far. 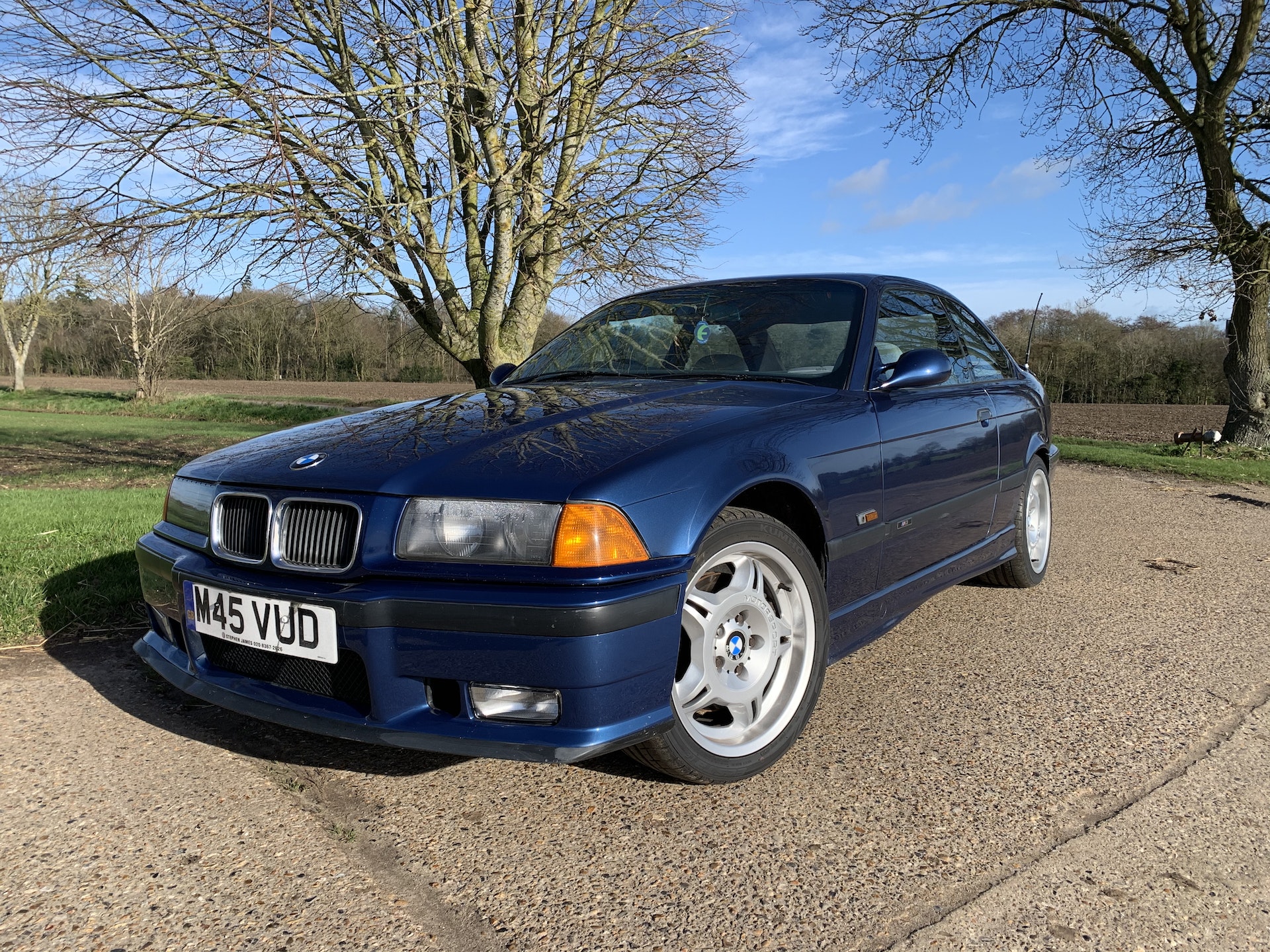 This BMW M3 Coupe is a sound example of an ‘everyman’ modern classic, presented in impressive cosmetic condition. It performs strongly on the road, and is sure to put a big smile on the face of its next enthusiast owner, every time they take it for a drive.