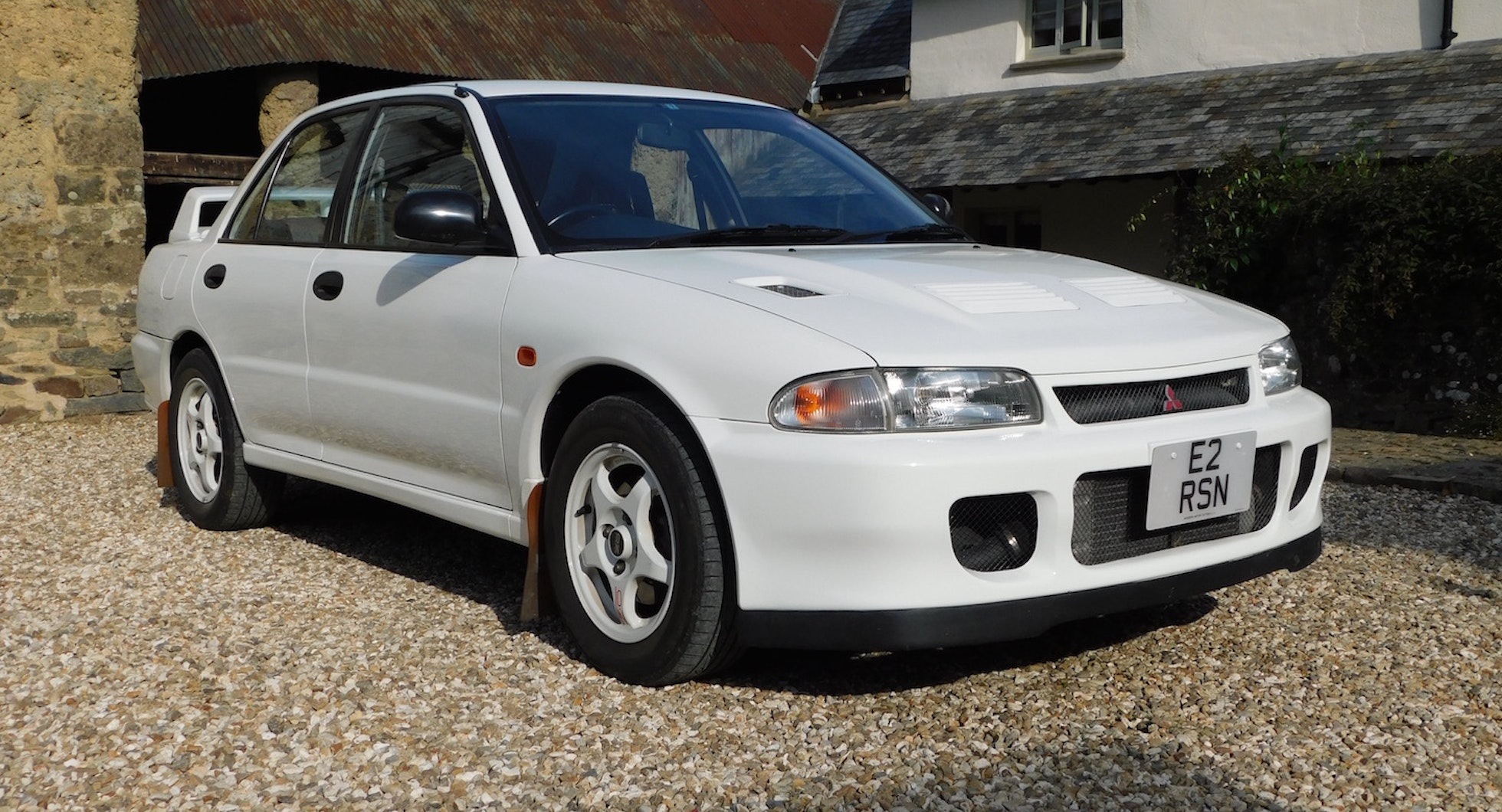 This Mitsubishi Lancer Evolution II RS is a rare, lightweight homologation special, which is presented in superb original condition with genuine low mileage. A Japanese Domestic Market (JDM) specification car, it is powered by a 2.0-litre four-cylinder turbocharged 4G63 engine that produces 252bhp, with four-wheel-drive via a five-speed manual transmission. The odometer shows just 57,365 km (35,645 miles) from new, which is fully supported by the service history. 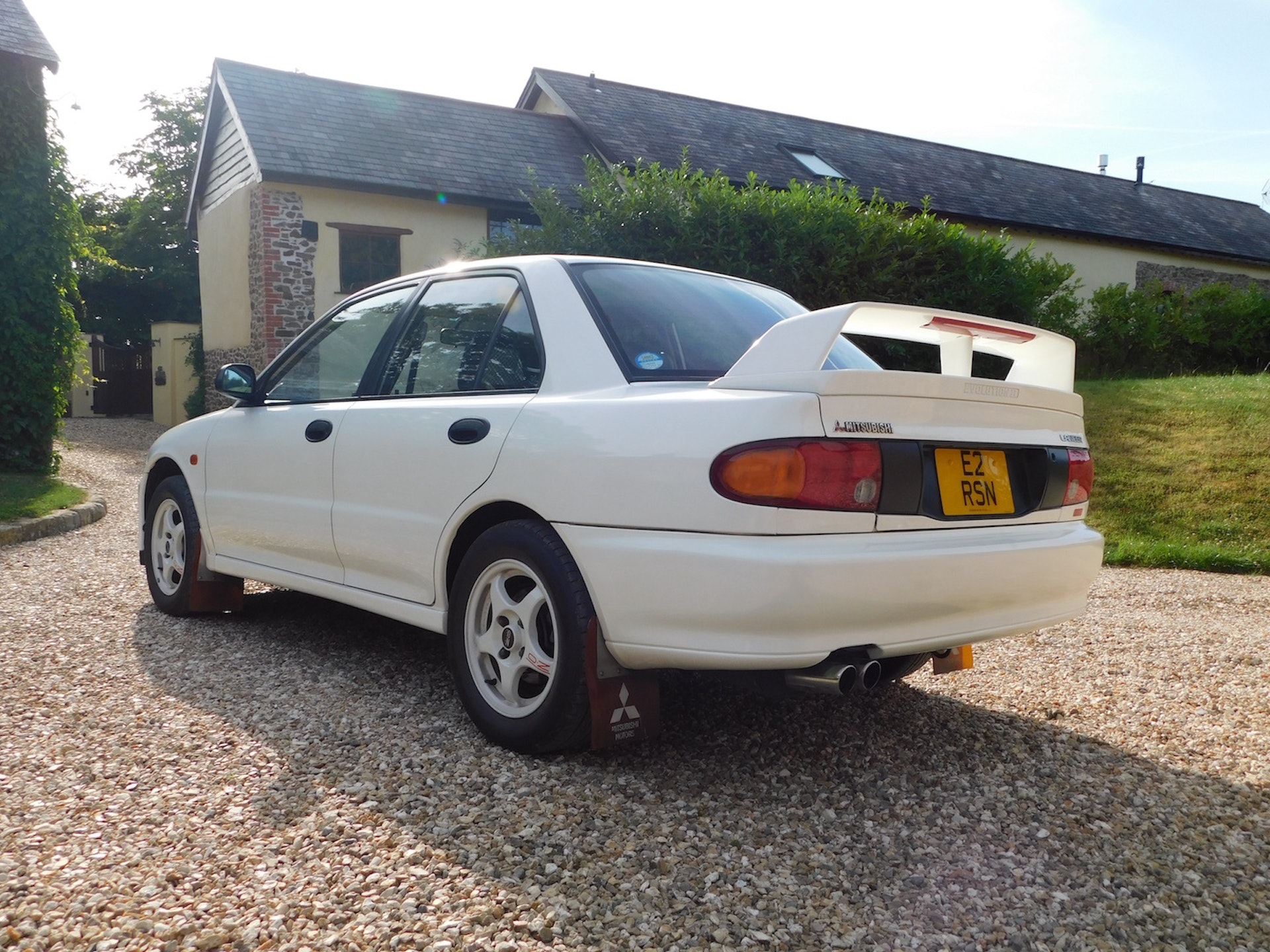 The Lancer Evo II was already a more powerful and sharper-handling development of the Evo I, and the RS variant took things further with a mechanical limited-slip differential, no radio or speakers, manual-winding windows and no-frills interior trim. It was a popular choice with privateer rally teams for Group A competition. 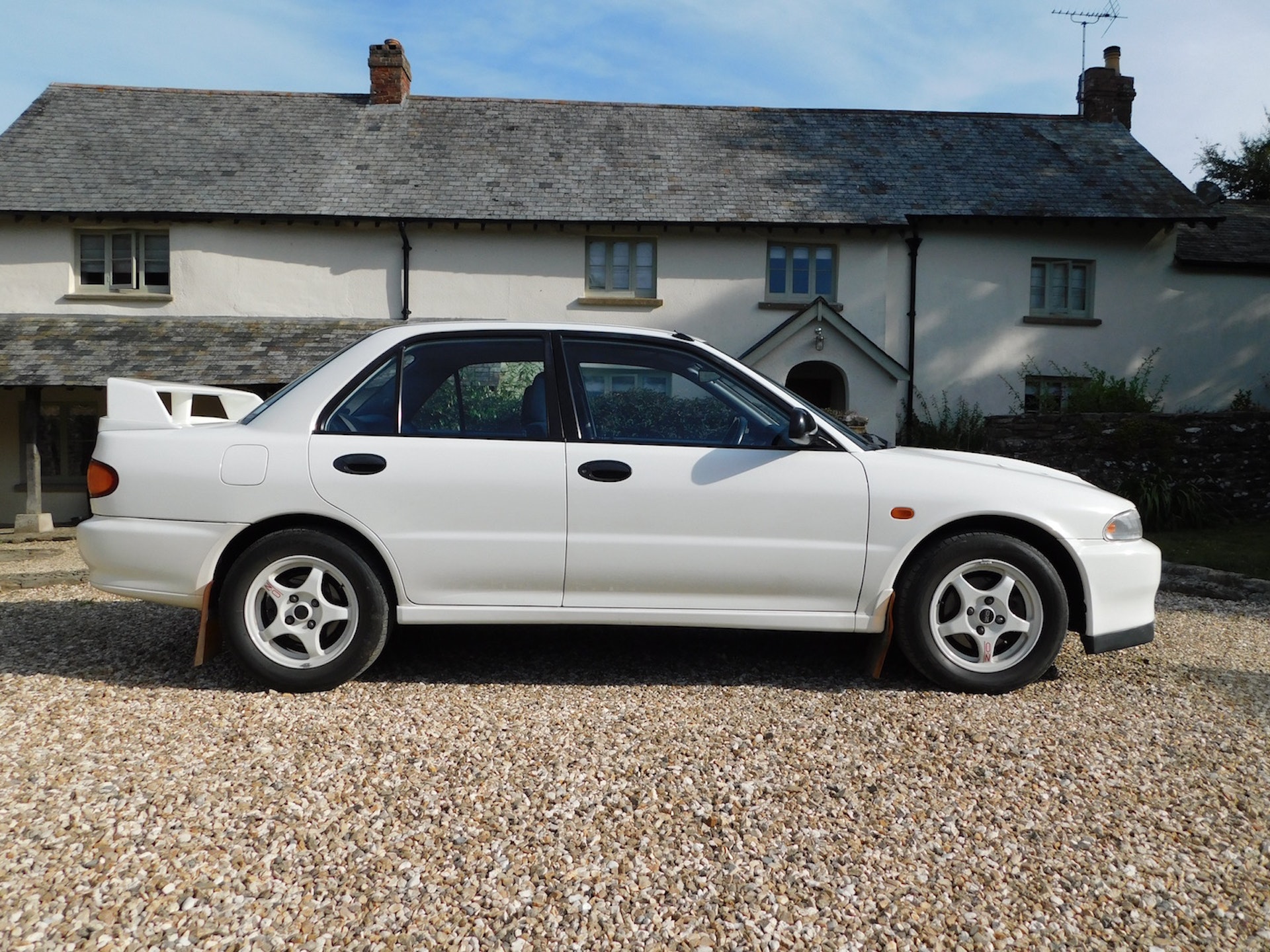 First registered in Japan in July 1994, this was evidently a cherished car in its home market, with well-documented history covered by 12 stamps in the service book. It was imported to the UK in March 2016 by performance specialist Torque GT, and was sold to a collector of Mitsubishi Evo models who already had examples of the Evo VI RS, IX RS and X RS in his stable. Since being acquired by the vendor two years ago, the Evo II RS has been used sparingly for events and shows, and remains in wonderful condition throughout. 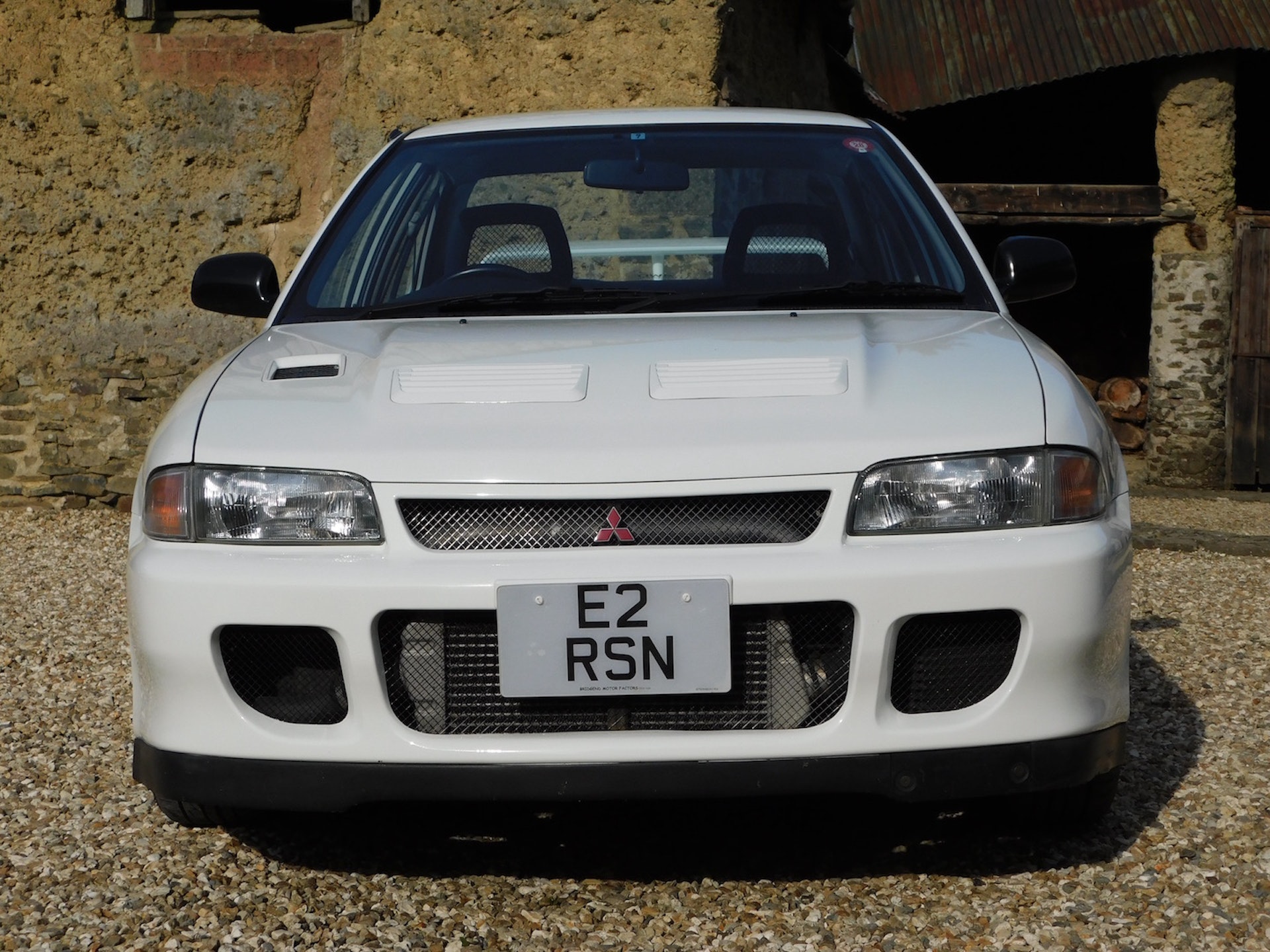 When not out-and-about impressing onlookers, this Mitsubishi is stored in a Carcoon Veloce air chamber and connected to a battery conditioner. The car’s bodywork remains in outstanding order, with no corrosion at all, and no accident damage to any panels. The only blemish noted by the vendor is a very small mark on the roof that has been touched in. Otherwise, the simple white paintwork remains original all around the car. 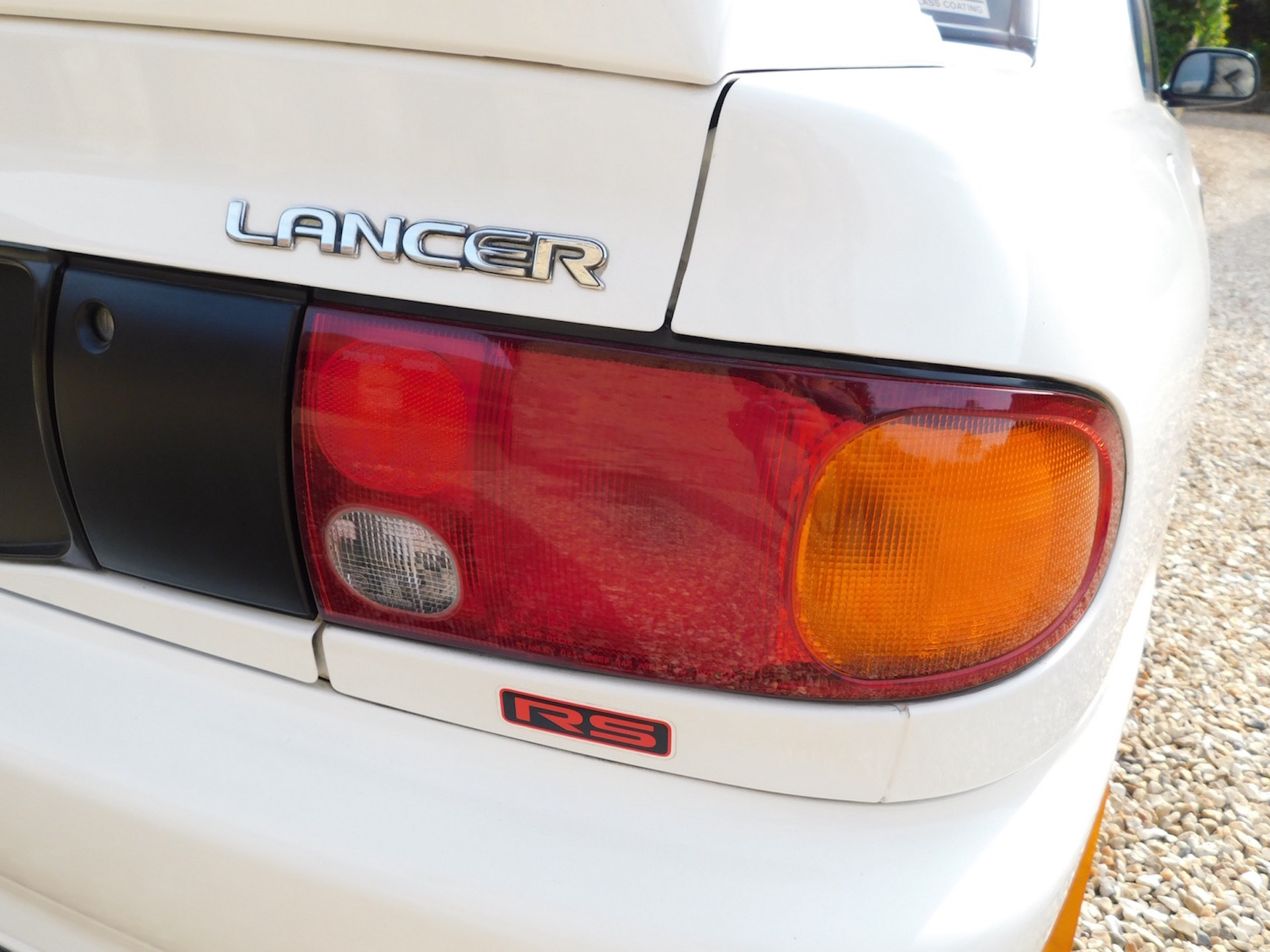 Early Evo models are far less aggressive than later cars, with only a deeper front bumper, vented bonnet and boot-mounted rear wing revealing its sporting intent. For the pared-down RS model, the wing mirrors and door handles are downgraded to simple black plastic items, along with custom badging. It rides on the original and correct set of 15-inch five-spoke OZ Racing alloy wheels, also painted white, which are in excellent order. 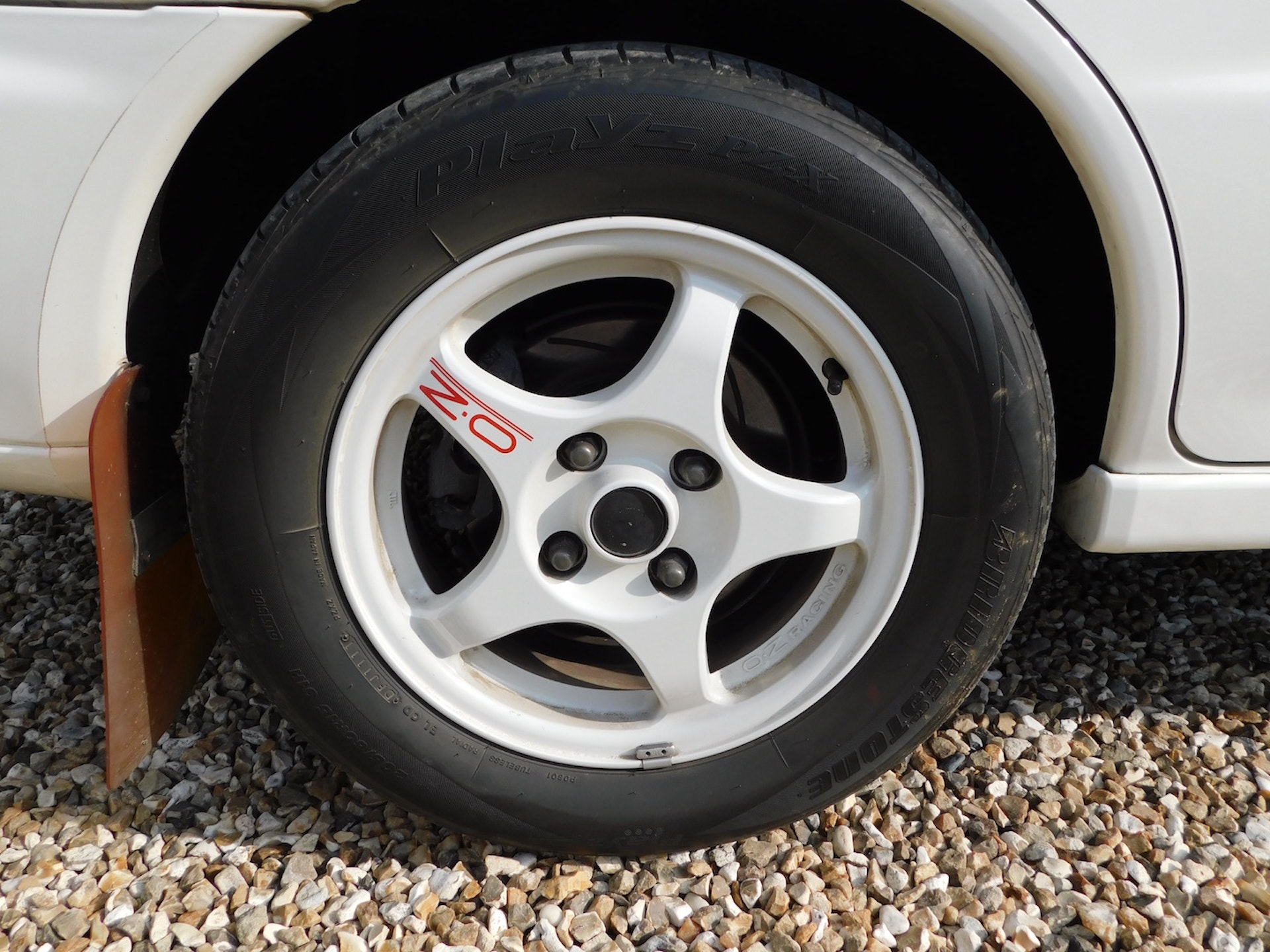 Inside, the Recaro sport seats, Momo steering wheel and three-gauge panel in the centre console are the giveaways that this is the cabin of the performance-focused model. Other than some slight sagging in the driver’s seat base bolster, the upholstery is in superb condition. The door cards also present very well, as do all the interior plastics and switchgear. The only notable wear is to the handbrake grip. 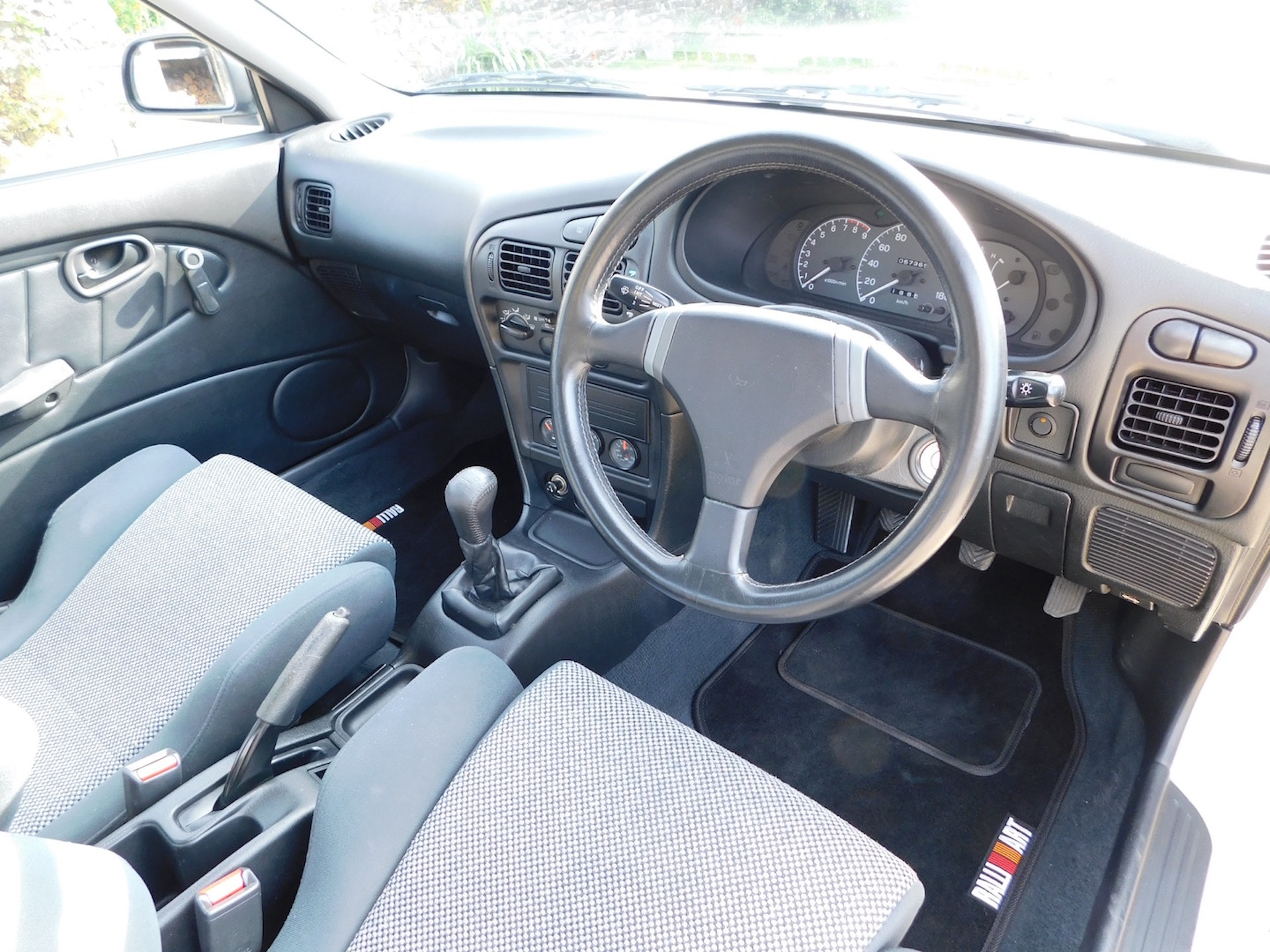 This Evo II RS starts, runs and drives very smartly, feeling every inch the dynamic yet supple four-wheel-drive lightweight special. The last scheduled maintenance was carried out by Torque GT at approximately 56,400 km (35,000 miles), which comprised of a new camshaft timing belt, uprated front anti-roll bar bushes, and a standard engine oil and filter service. The two previous service visits in Japan took place at 33,279 miles and 32,864 miles, and there are a further 10 stamps on file. 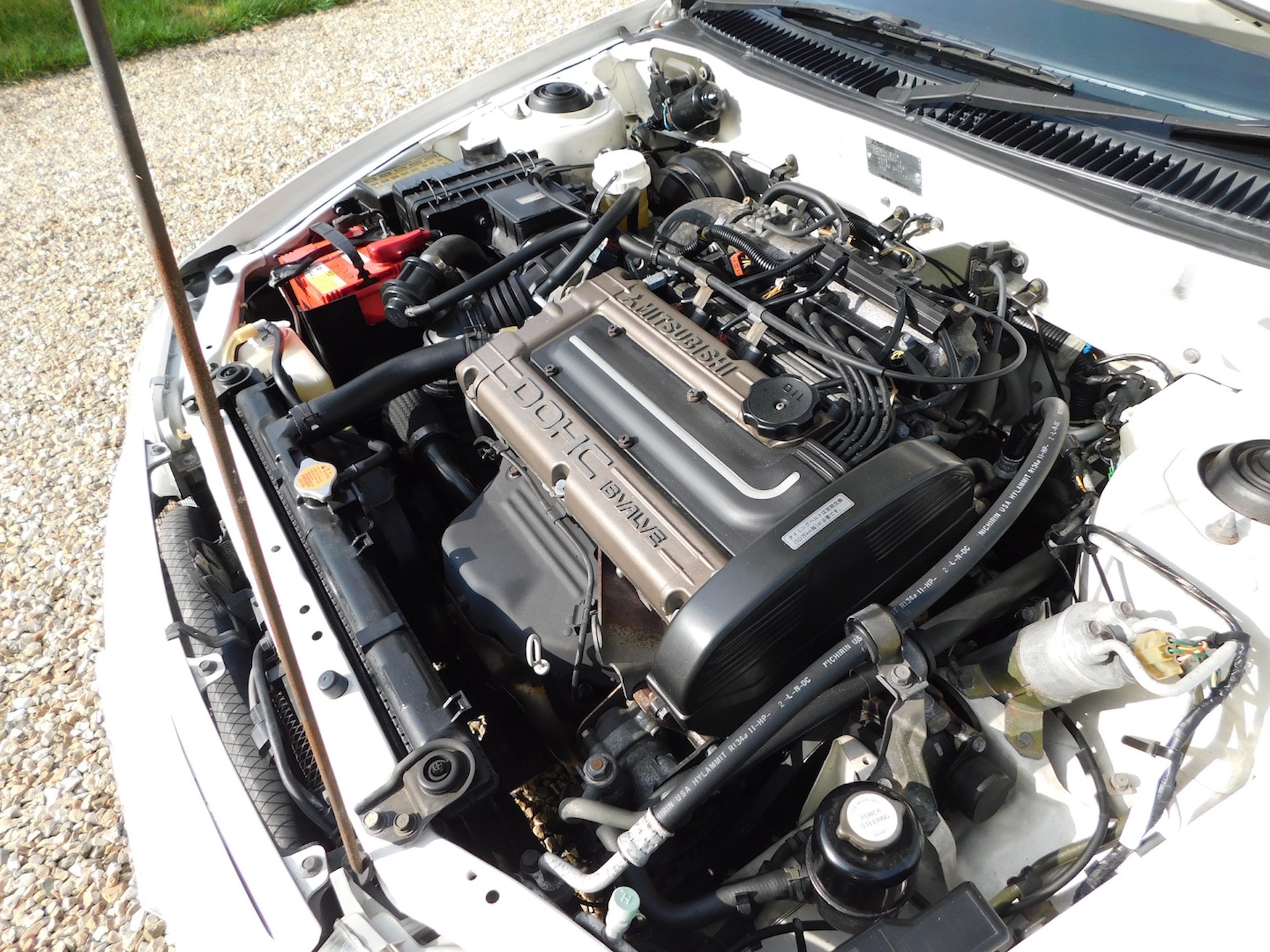 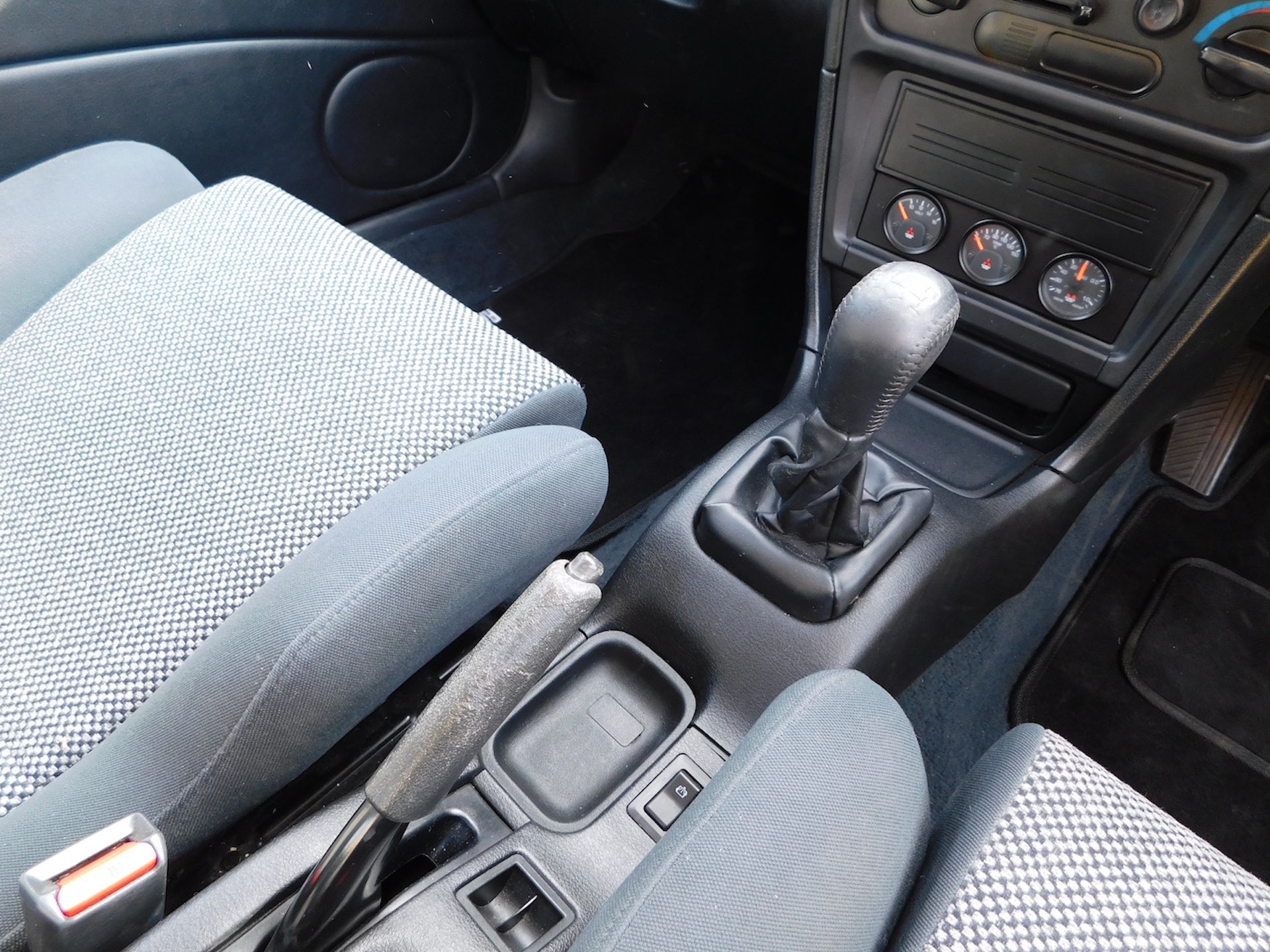 Accompanying the car is the full Japanese market book pack, including the owner’s manual and a comprehensive service record. 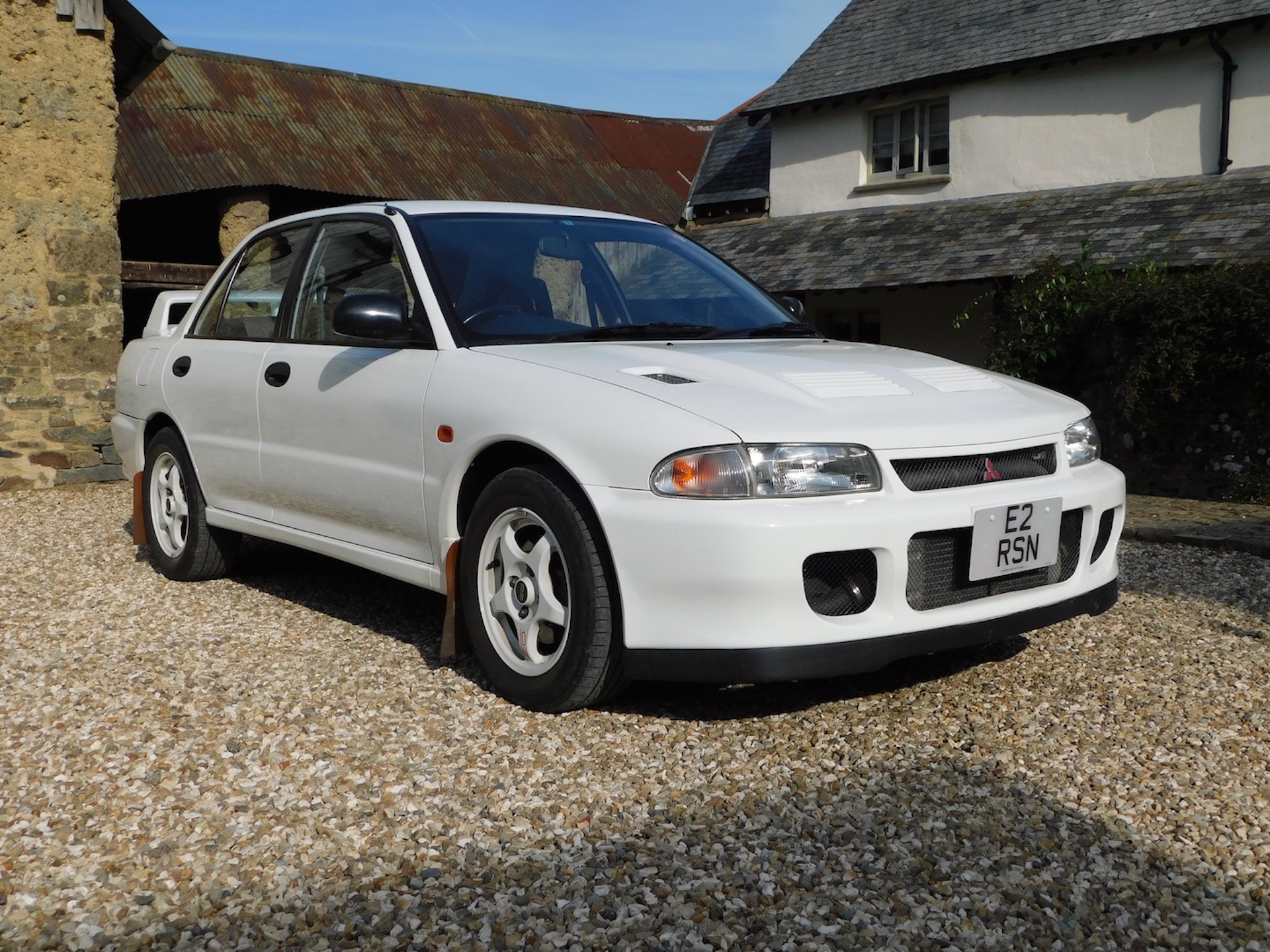 This Mitsubishi Lancer Evo II RS is a very rare and low-mileage JDM performance car, which is presented in original and unmodified condition. As a 1994 car, it is also now eligible for export to the US under the 25-year rule, which opens up a fresh market of fans. Having previously been cared for by one of the most fastidious Evo enthusiasts in the UK, this is unquestionably a collectable modern classic that is sure to delight its next owner.