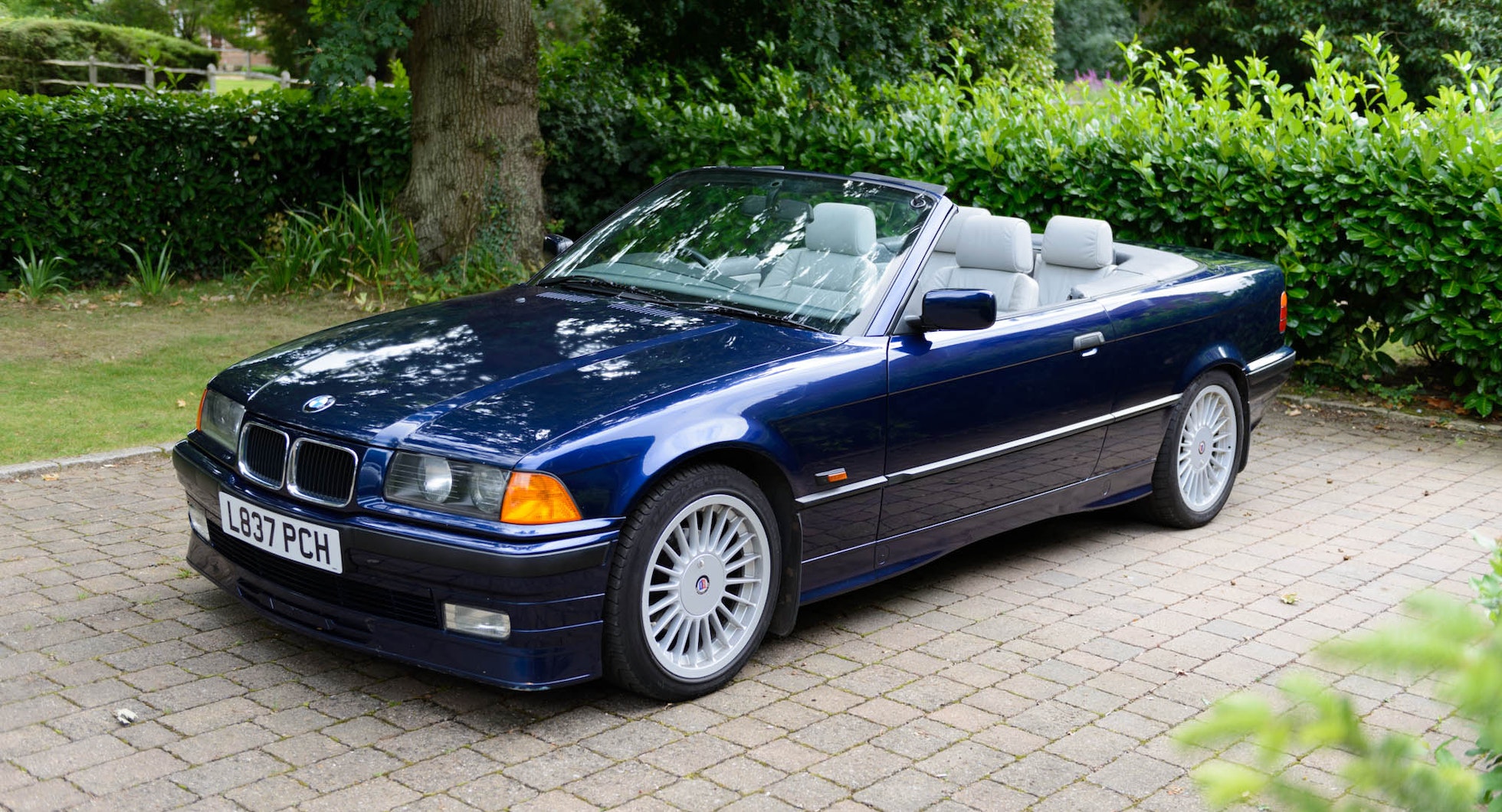 This 1993 BMW Alpina B2.5 Cabriolet is a low-mileage example of a bespoke open-top car, offered from 25-year ownership. It is equipped with the 189bhp 2.5-litre straight-six petrol engine, which is driven through a five-speed automatic transmission. Now showing just 54,906 miles from new, which is warranted by the history with the car, this is a collectable modern classic that needs only minor attention to bring it up to a high standard. 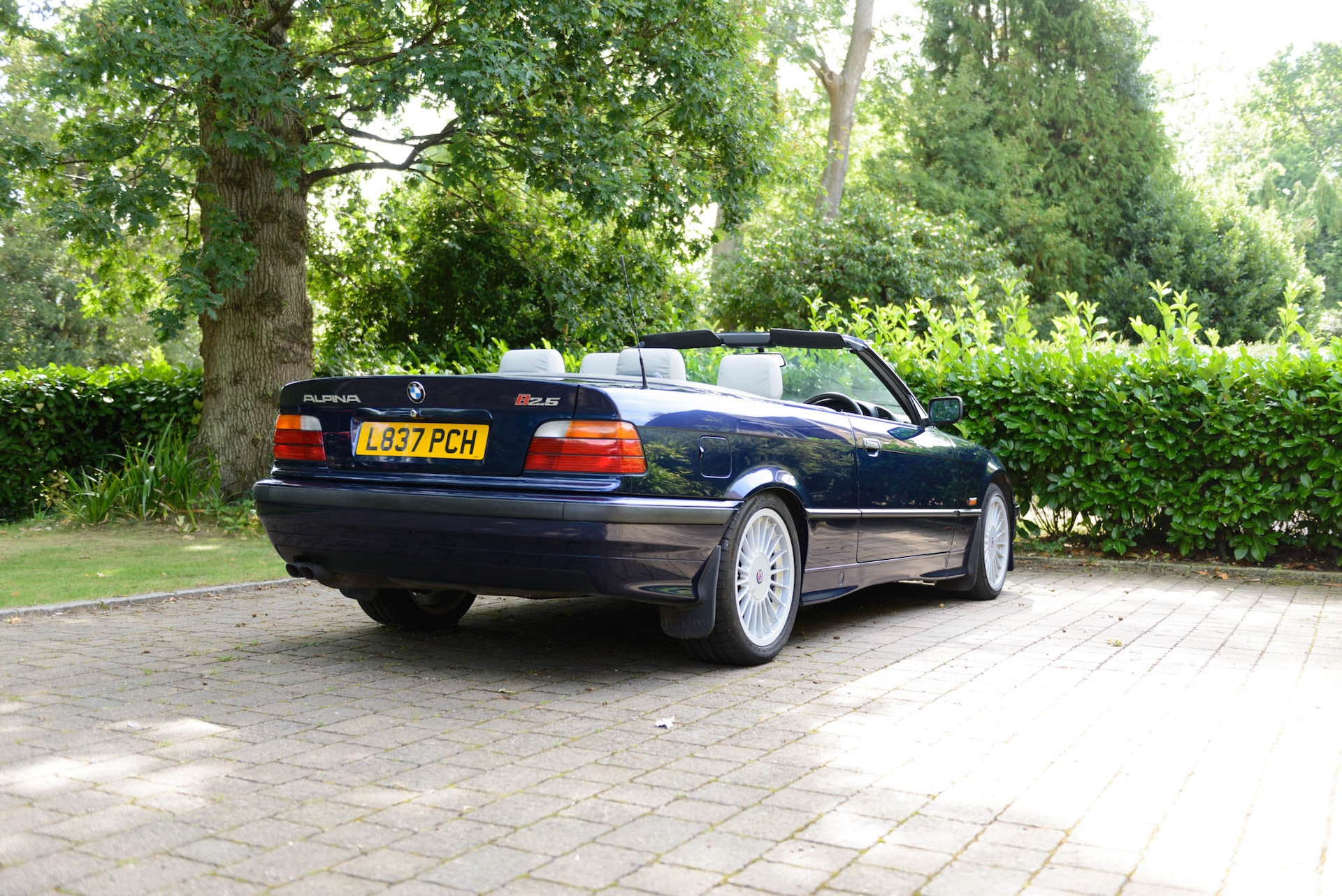 The B2.5 series of cars was not manufactured in Buchloe by Alpina, but built with their blessing by the official UK importer, Sytner. Based on a standard 325i, the modifications varied from a cosmetic upgrade with official Alpina parts, to a more extensive overhaul with uprated mechanicals. The car on offer here is the former, featuring an official Alpina bodykit as well as genuine Alpina 17-inch multi-spoke alloy wheels and B2.5 badging on the rear. 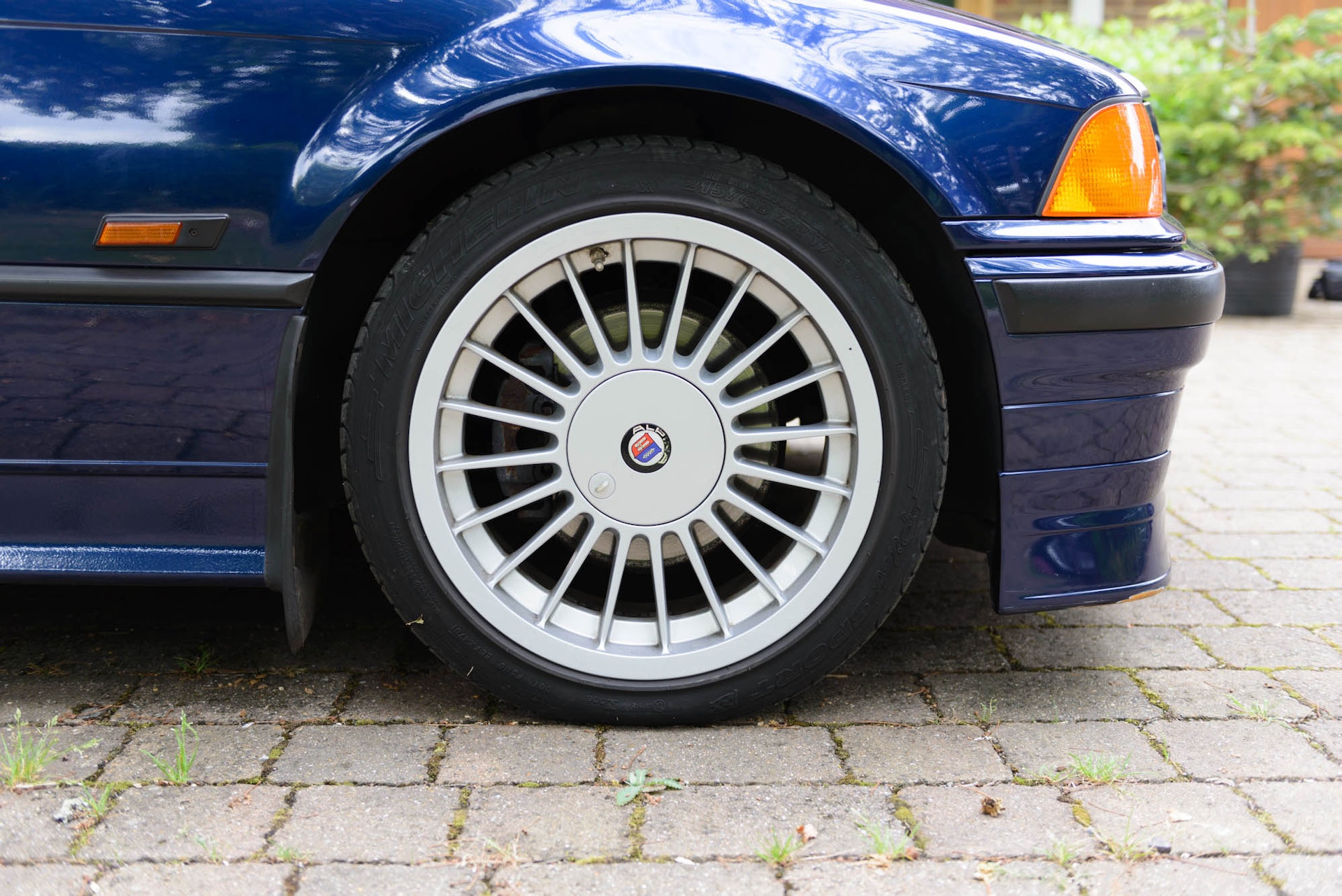 In total, around 200 B2.5-badged cars are understood to have been produced by Sytner, with a mix of coupe and cabriolet versions. 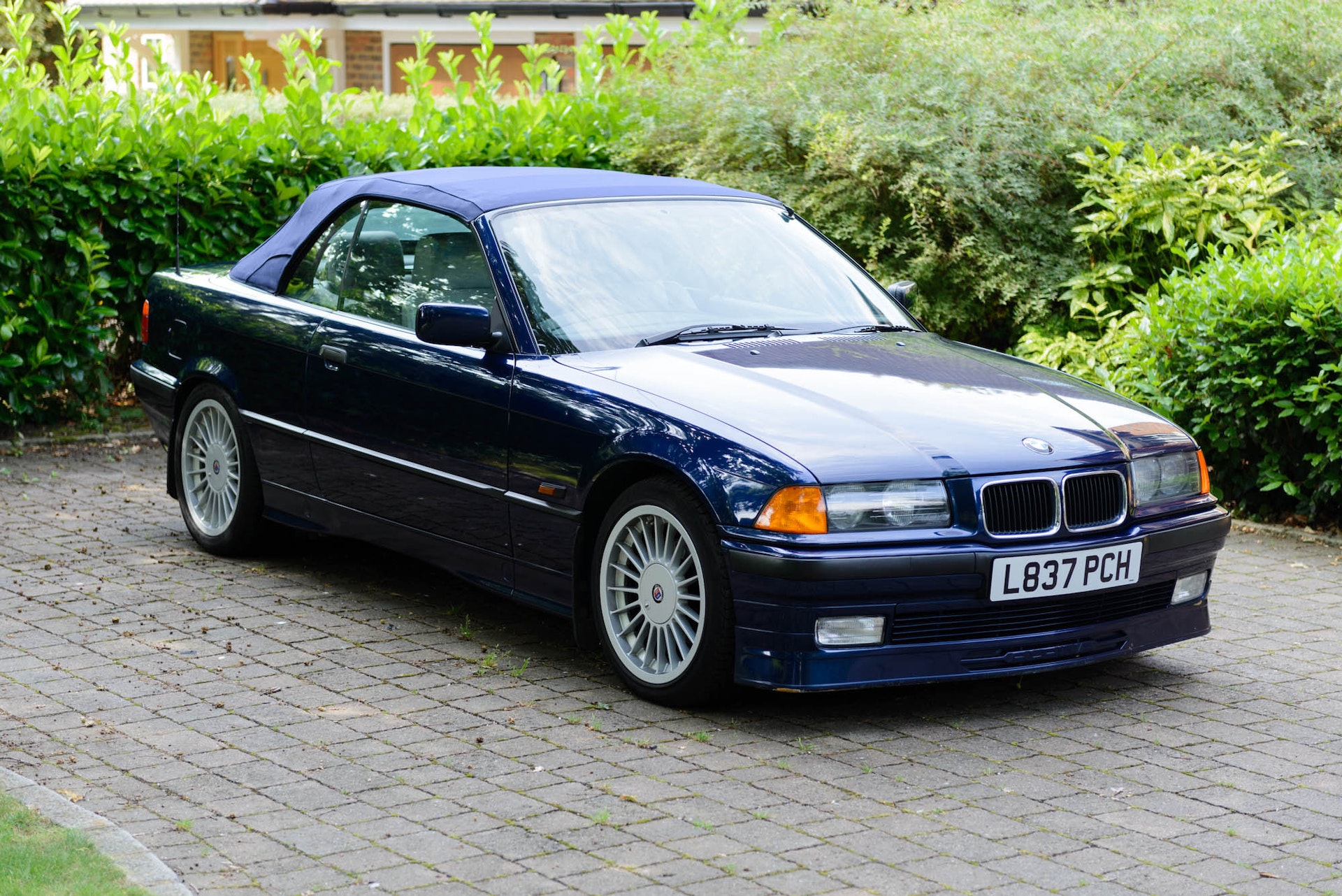 This particular car is an original UK right-hand drive example, which was given its pre-delivery inspection by Sytner in Nottingham on 23 December 1993. The DVLA records its date of first registration as 1 January 1994. It has just one previous keeper, who owned it for seven months. The vendor is the second owner from new and has held onto it for 25 years, having acquired it in August 1994. 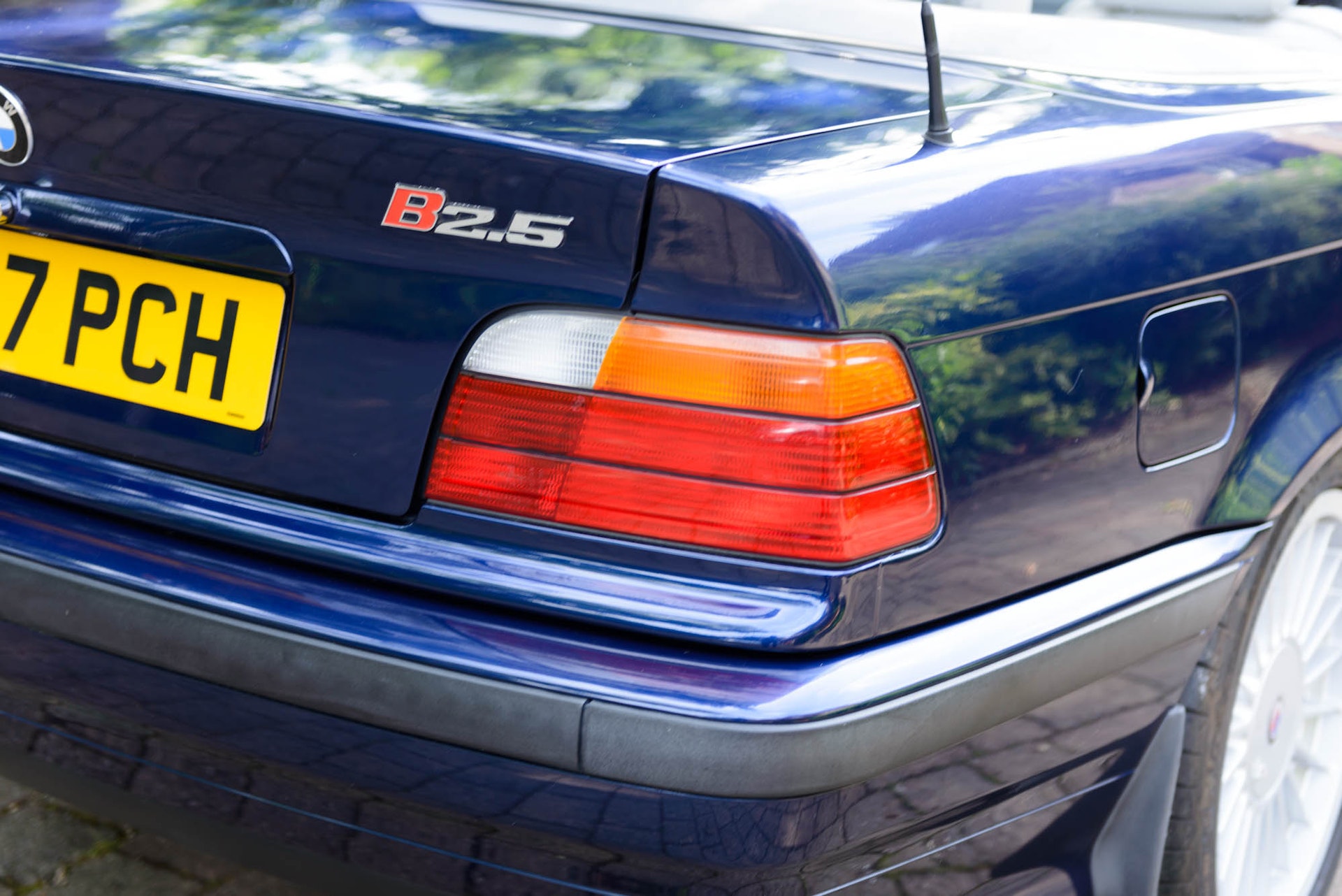 Its Mauritius Blue metallic paintwork is in generally very good condition. There are a few scuffs at the bottom of the front splitter, and a couple of minor surface scratches elsewhere. The 17-inch Alpina alloy wheels present well, with only small kerbing marks and some bubbling of the lacquer on the inner edges of the spokes. All of the light lenses are undamaged and the exterior plastic trim has also aged well. 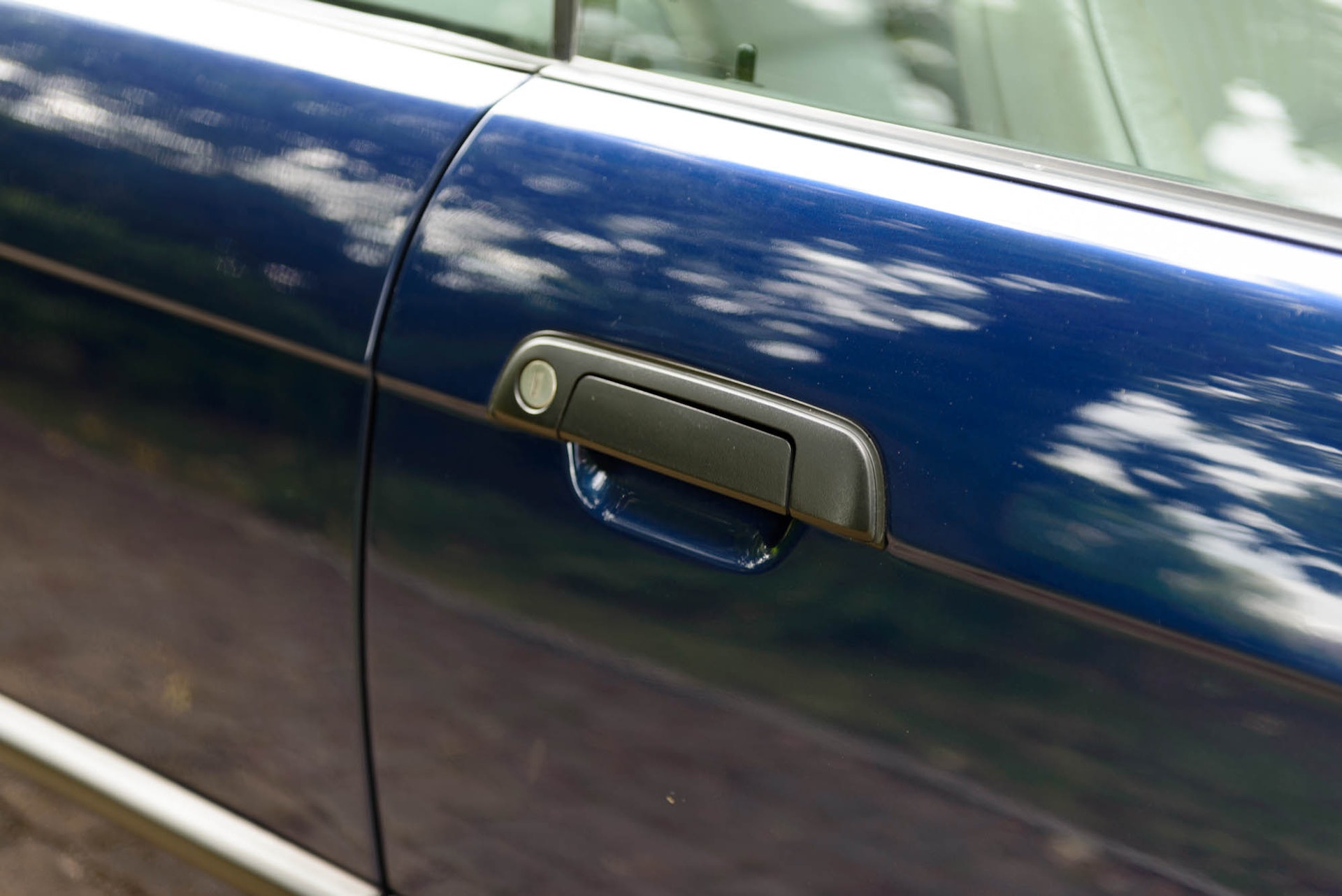 The dark blue hood is the original fabric. While it has some colour fade in places, the fit is snug and the electro-hydraulic mechanism works perfectly. There is a small section of plastic missing in the rear window surround, though it is still watertight. Inside, the headlining of the hood remains in sound condition. 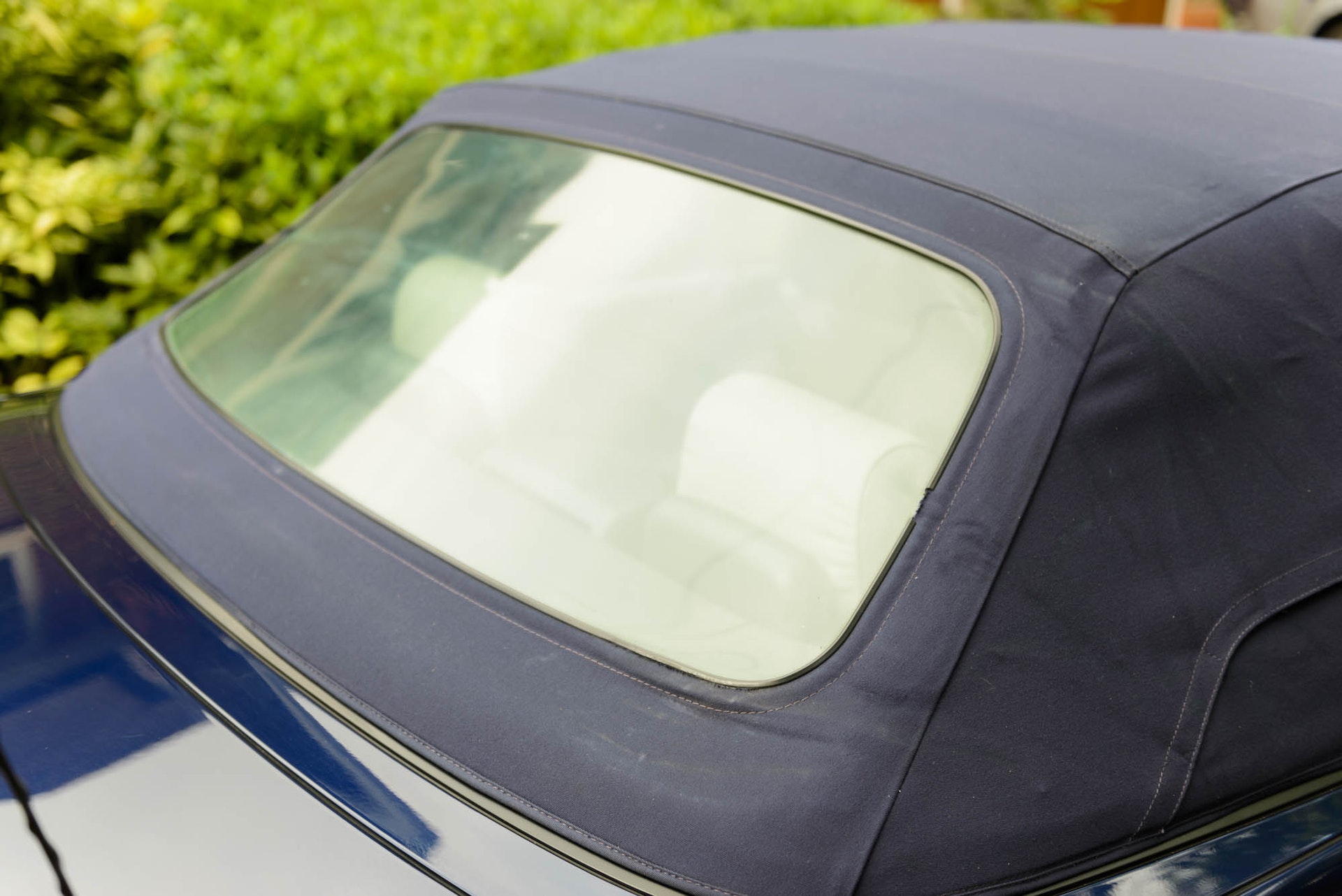 The seats are trimmed in light grey leather, which remains in great shape. There is no damage or sagging to the material, and the colour wear on the bolsters and armrest would be easily rectified by some professional re-connolising to make it look as good as new. It also features headrests for the rear seat passengers. The original light grey carpeting and fitted overmats show some wear around the pedals, and a few stains in one rear footwell, but are otherwise in good order. 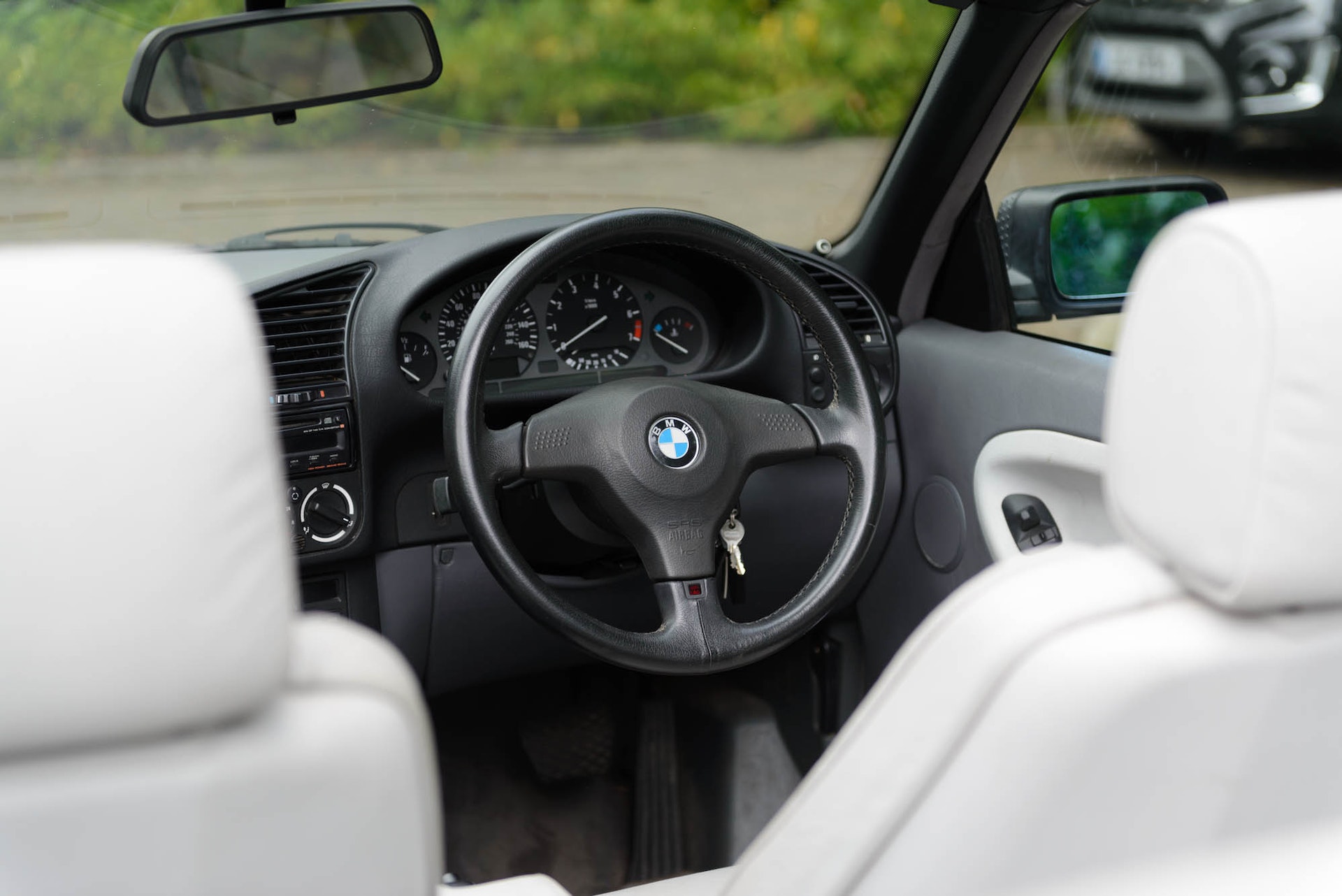 Ahead of the driver, the three-spoke sport steering wheel is trimmed in leather, and the cabin also features dual-zone air-conditioning controls. A Pioneer DEH-670 stereo and CD player head unit delivers the audio, and there are no known electrical faults with the car. At the rear, the boot carpeting is in good condition, the original tool kit and Sytner dust cloth are present in the fold-down flap, and there is a spare wheel under the boot floor. 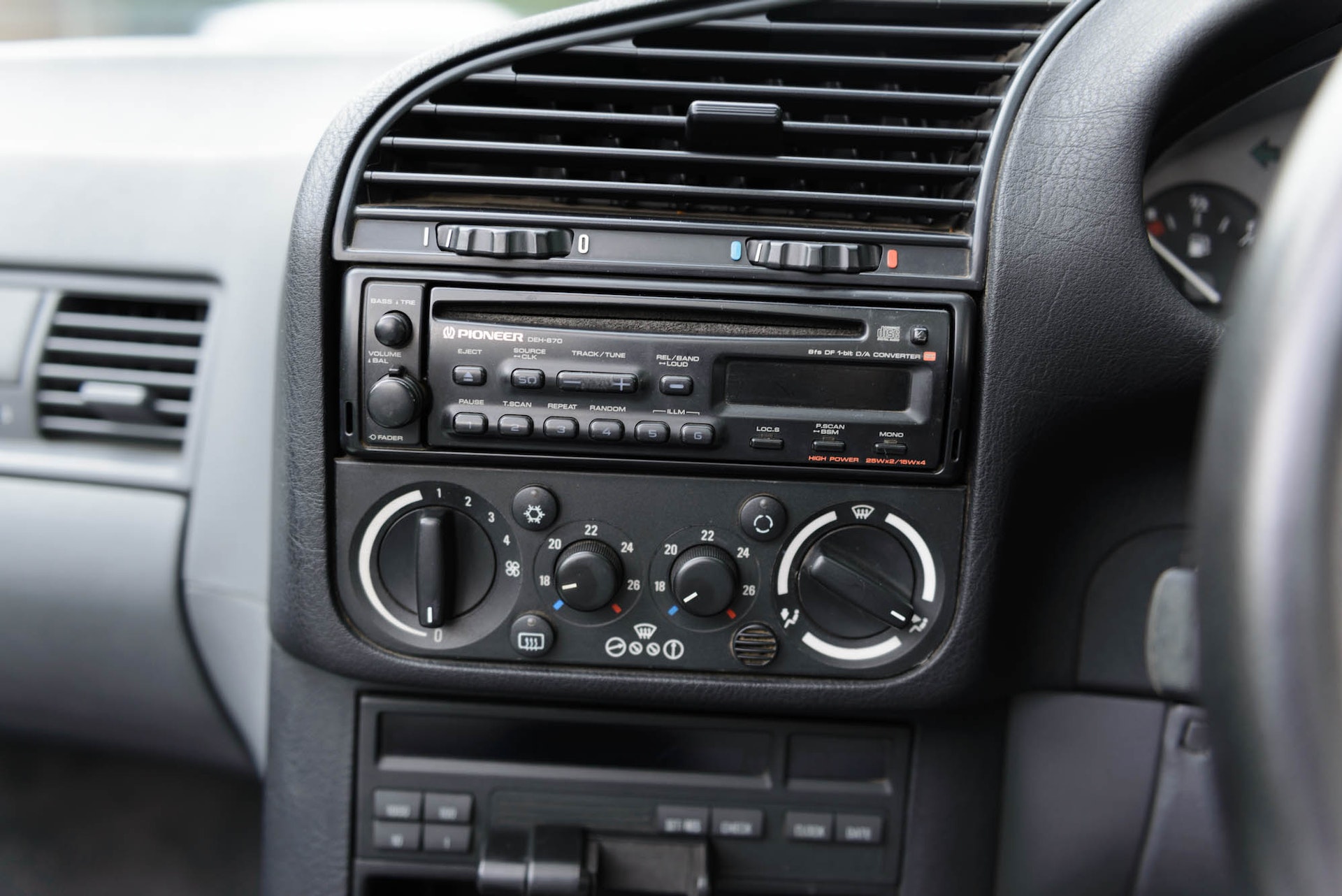 The engine bay is clean and tidy, and there are still factory stickers remaining on the painted frame. It starts, runs and drives well, and was last serviced by Cridfords in Surrey on 24 August 2017 at 54,686 miles. This work included an oil and filter service, as well as renewal of the brake fluid, and replacement of the rear shock absorbers and bump stops. 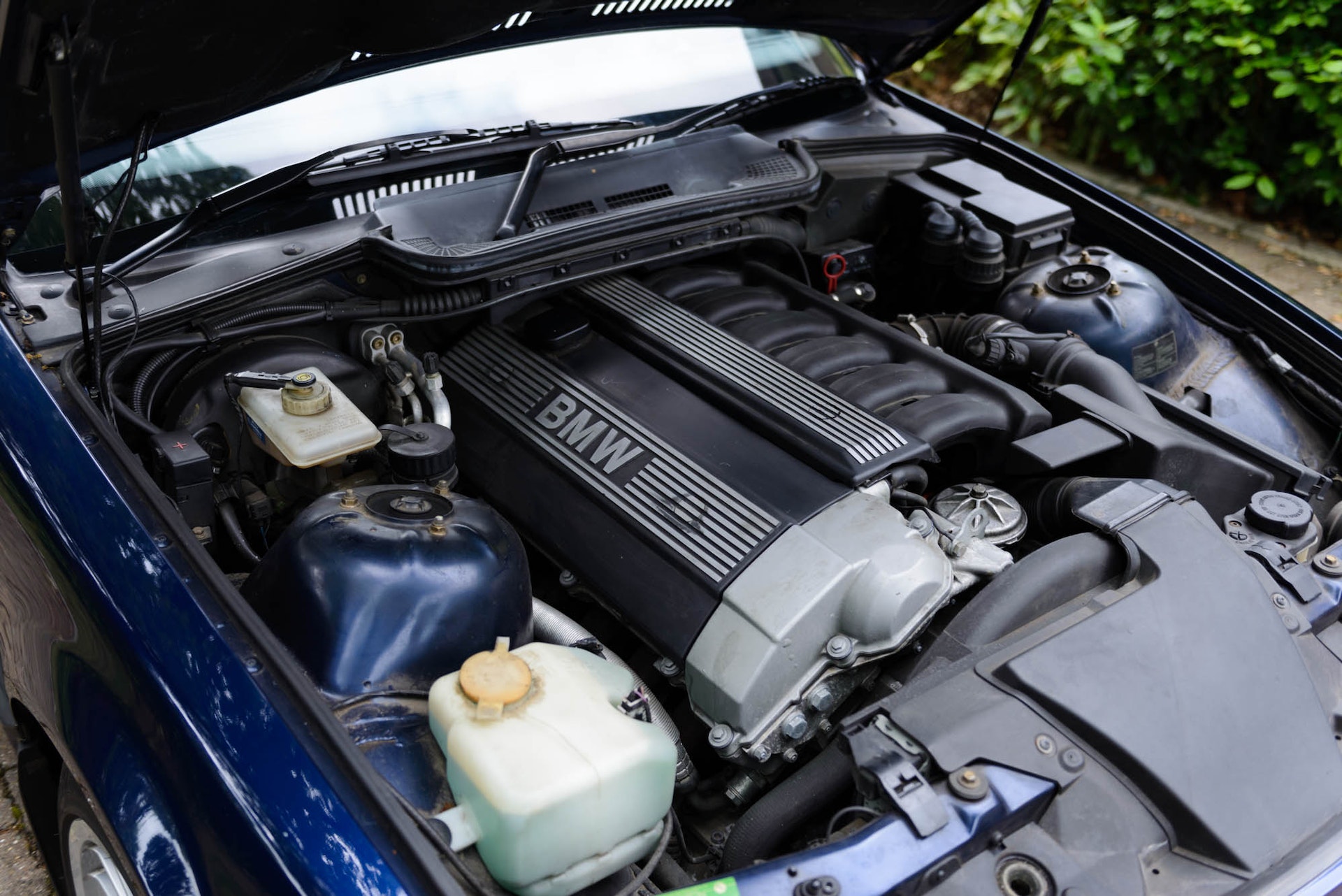 The last MOT test was in May 2019. Advisory notices mention some damage to the offside front tyre, as well as wear to the brake discs and pads and to the front bump stops. The alloys are shod in Michelin Pilot Sport tyres in size 215/45 ZR17 at the front and 245/40 ZR17 at the rear, which have around half their original tread depth remaining. 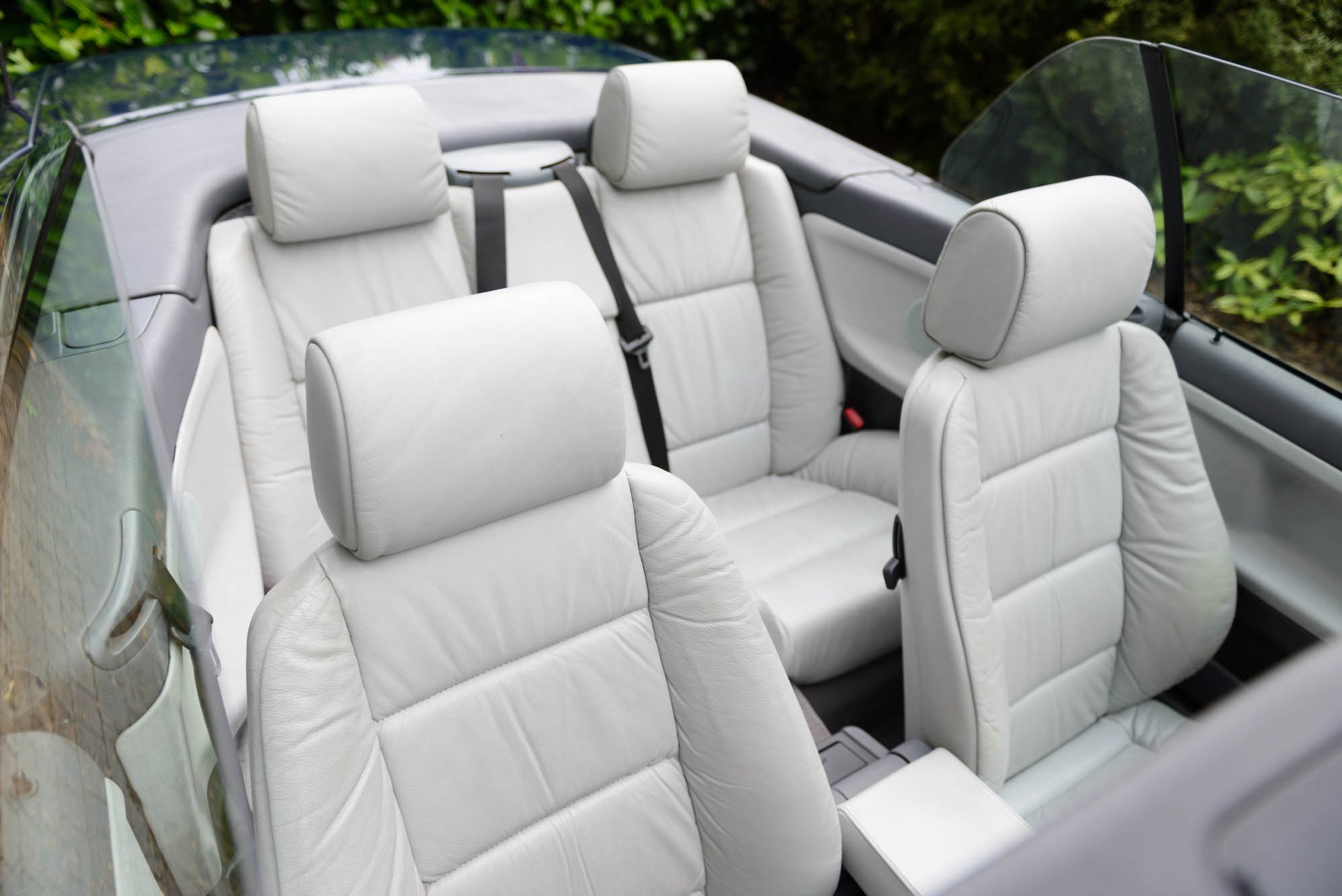 It is accompanied by original keys that retain the Sytner dealer fob, as well as the owner’s manual and stamped service booklet. This BMW Alpina B2.5 Cabriolet is a cherished car that has been with the same owner for 25 years. The colour scheme and stance arguably make it more of a head-turner than most other E36s. Driven more sparingly over the last five years in particular, this low-mileage example is being offered to a new owner who can enjoy its exclusivity and period charm. 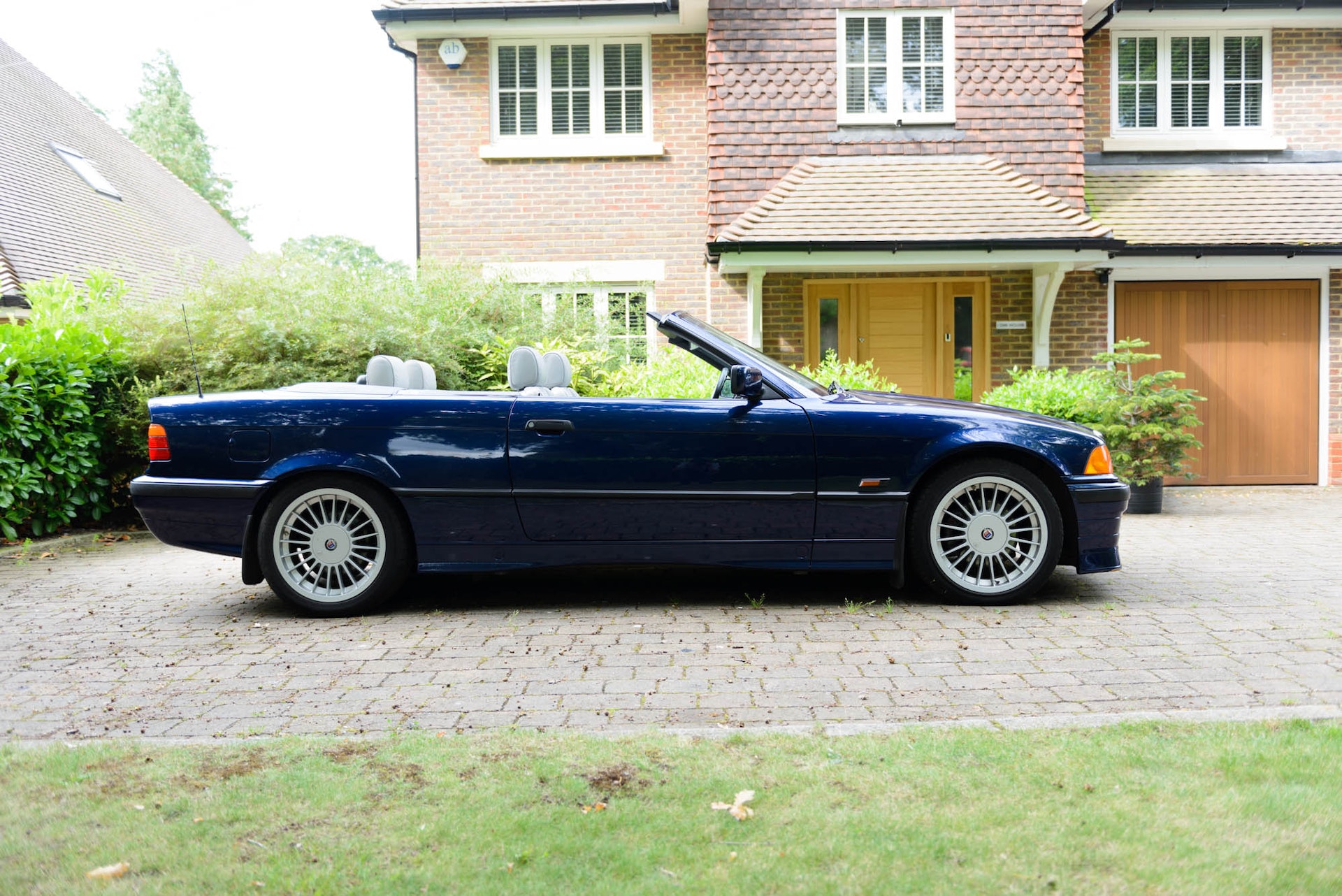 Summary of service and MOT history