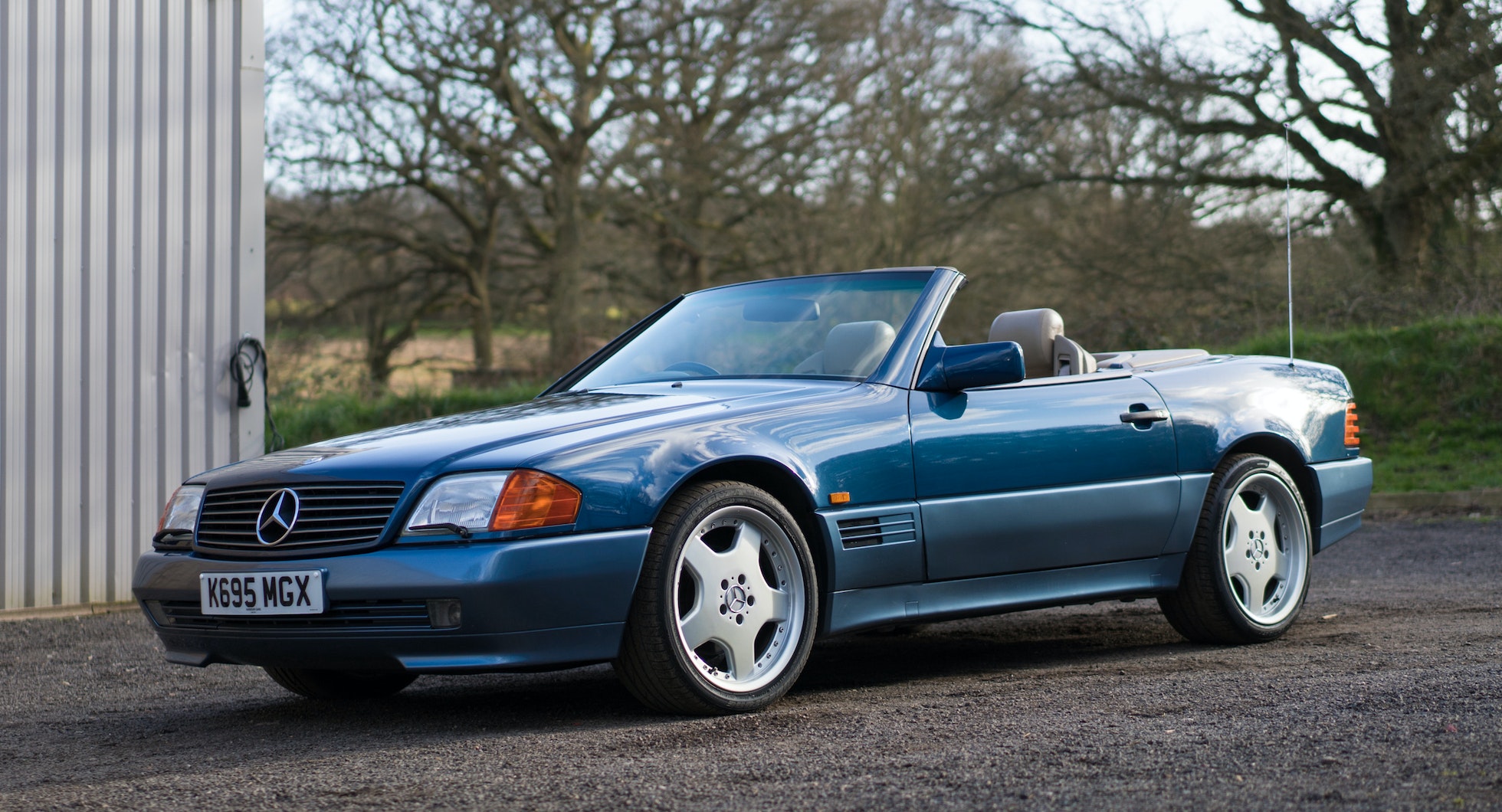 This Mercedes-Benz 300 SL-24 is an appealing modern classic, presented in sound condition, which would make a stylish weekend driver. It is powered by the 3.0-litre M104 DOHC straight-six, producing 228bhp, with rear-wheel drive via the five-speed automatic transmission. This 24-valve engine is the highest revving of all the R129 motors, with the redline at 7,000 rpm. The odometer of this example shows 155,722 miles from new. 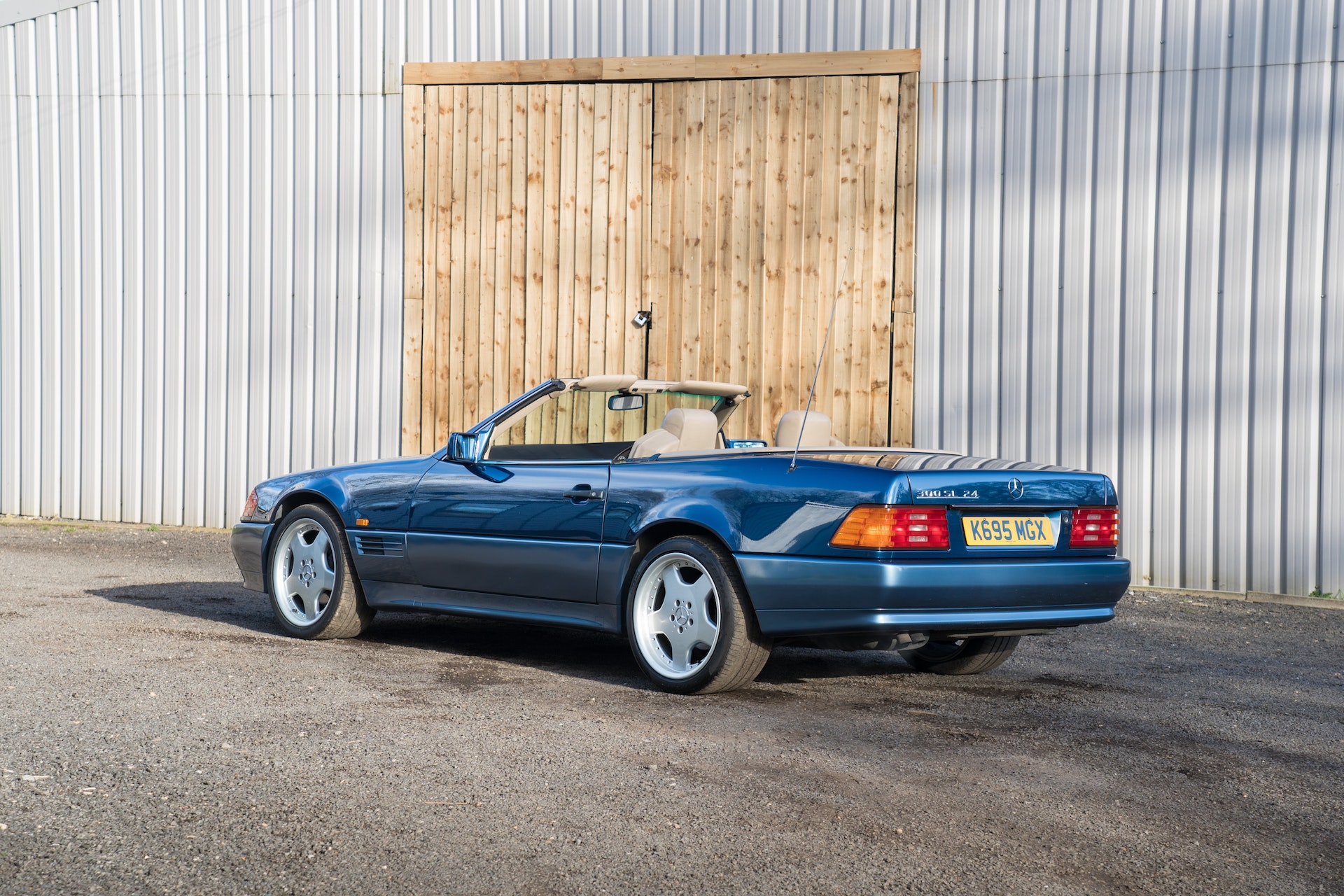 Online factory build data indicates that this car was completed late 1992, and it was first registered in January 1993. There is just one previous registered keeper on the V5C log book. It has a comprehensive stamped history up to 124,725 miles, and since 2005 has been maintained as needed by the owner. 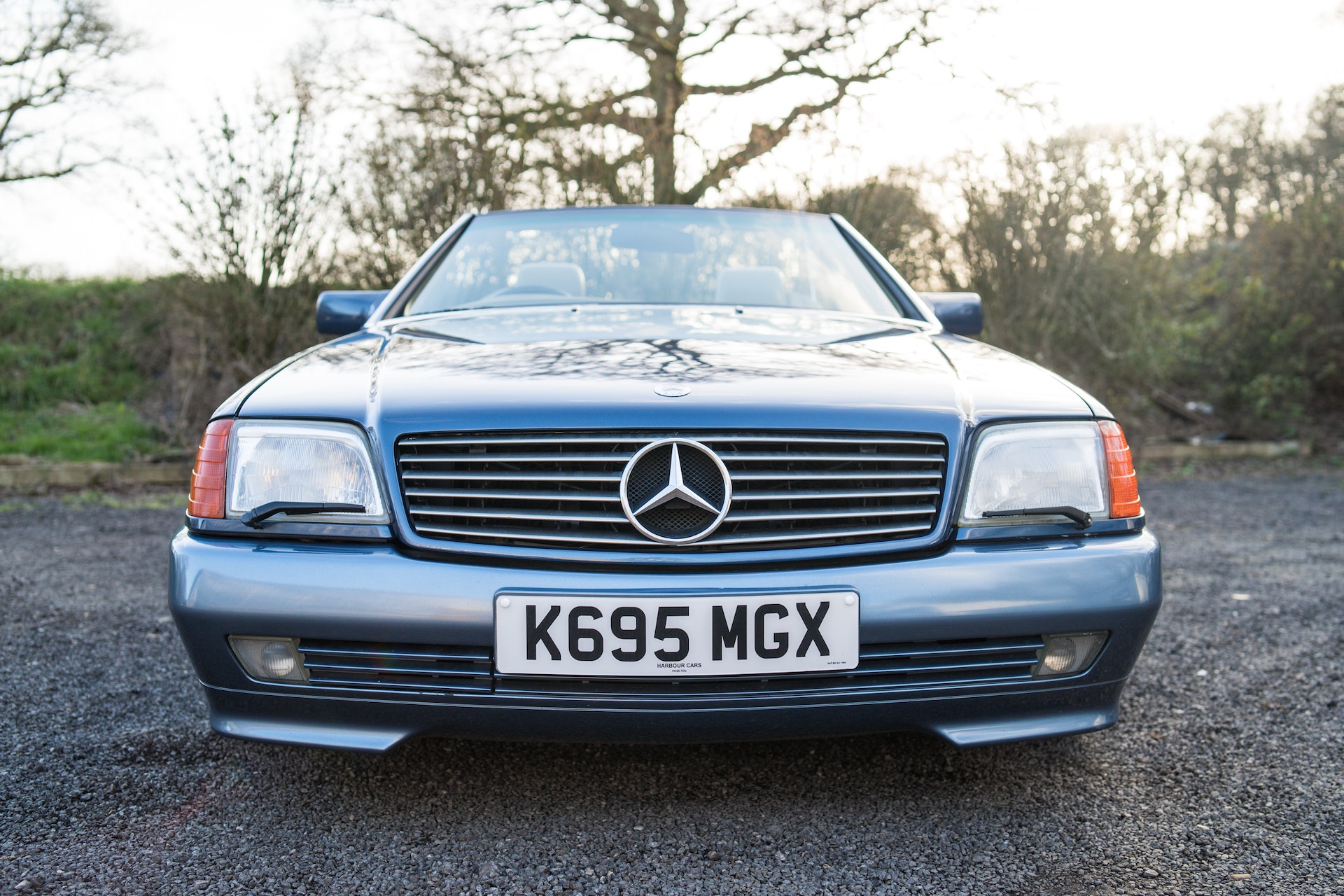 The bodywork of this 300 SL-24 presents in good condition, with no accident damage or unsightly dents in the panels. The seller believes that it has had a fairly recent respray, which still has a smooth and even finish around the car. There are some shallow chips in the paint in a few places, light scuffs around the bumpers, and lacquer peel where the hard top slots into the body - though the latter is only visible with the roof off. There is also some corrosion present on the nearside door, above the lock catch on the end panel, which is clearly shown in the gallery below. 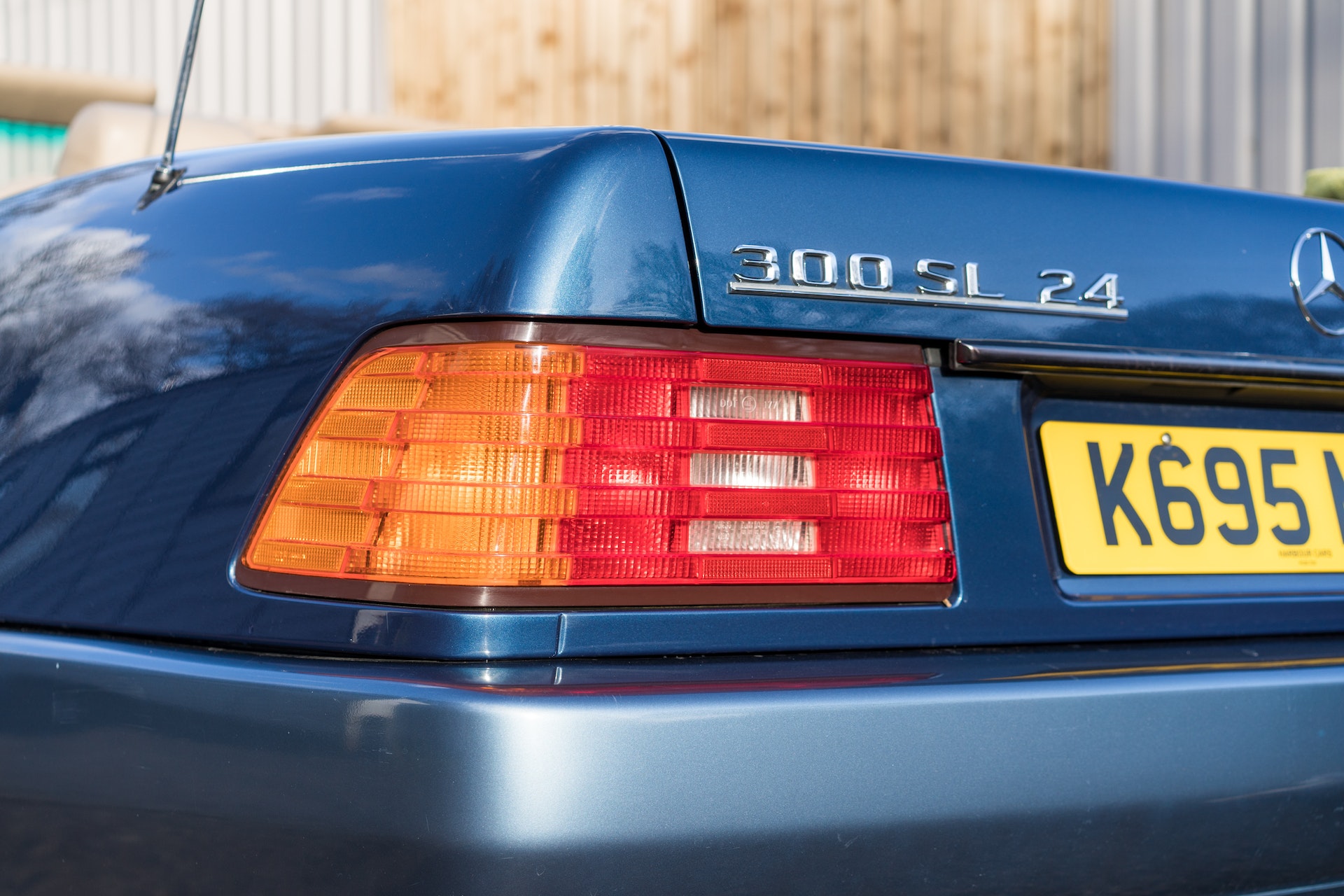 It has a dark blue canvas soft top, which still fits well, and benefits from a recently renewed roof mechanism motor as well as replacement of the fabric liner. The car was originally delivered from the factory with the eight-hole alloys, but has since been upgraded to wide 18-inch AMG-style monoblock wheels. They are in good order, with only a few light kerb scuffs around the edges, and a handful of the cosmetic studs missing. 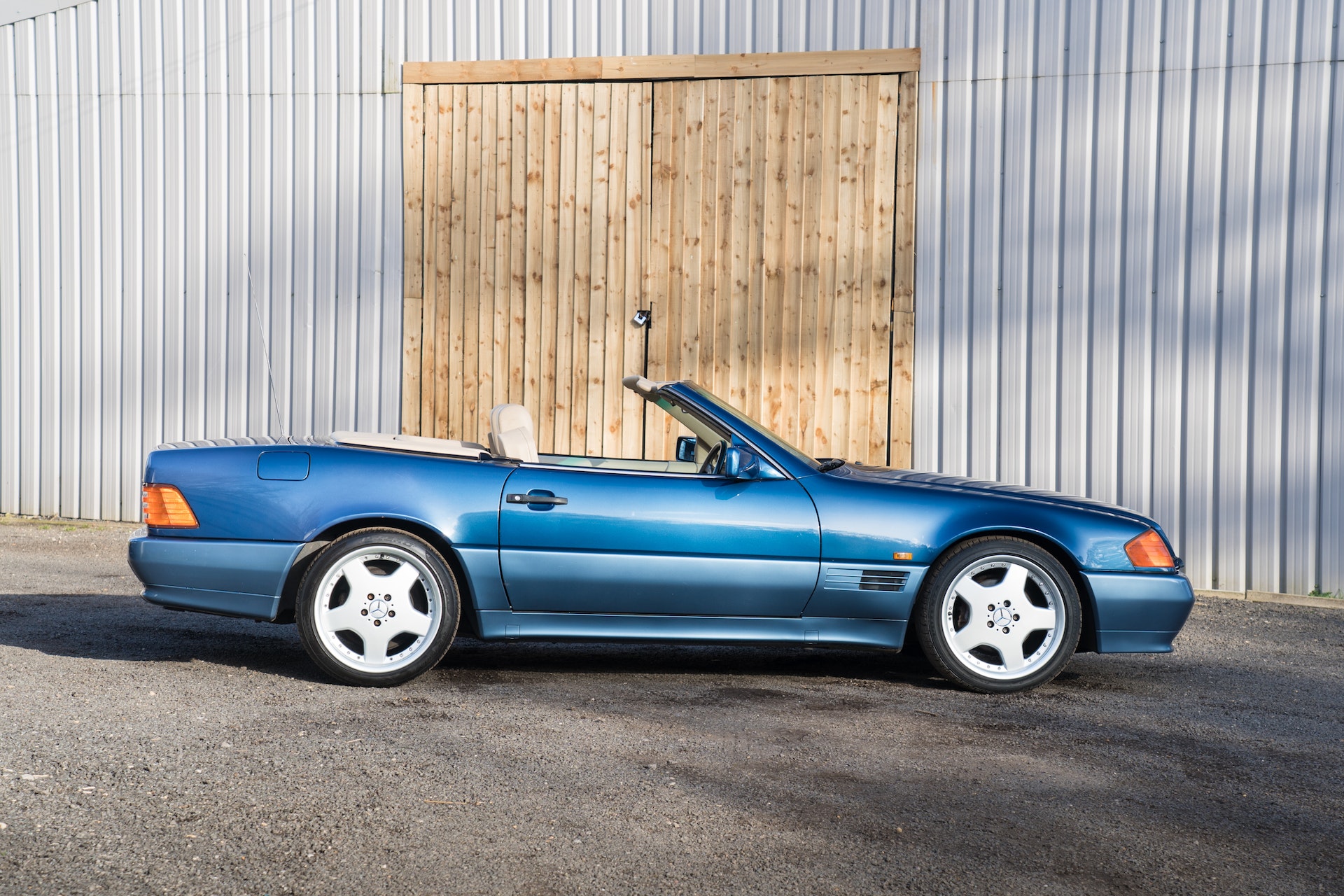 The seller describes the interior as being in fair condition, and it is upholstered in full beige leather throughout. There is some obvious wear and discolouration, on the central armrest in particular, but the seats still present very well. It is certainly a cabin that would benefit from professional re-connolising, given that the leather itself is sound throughout. 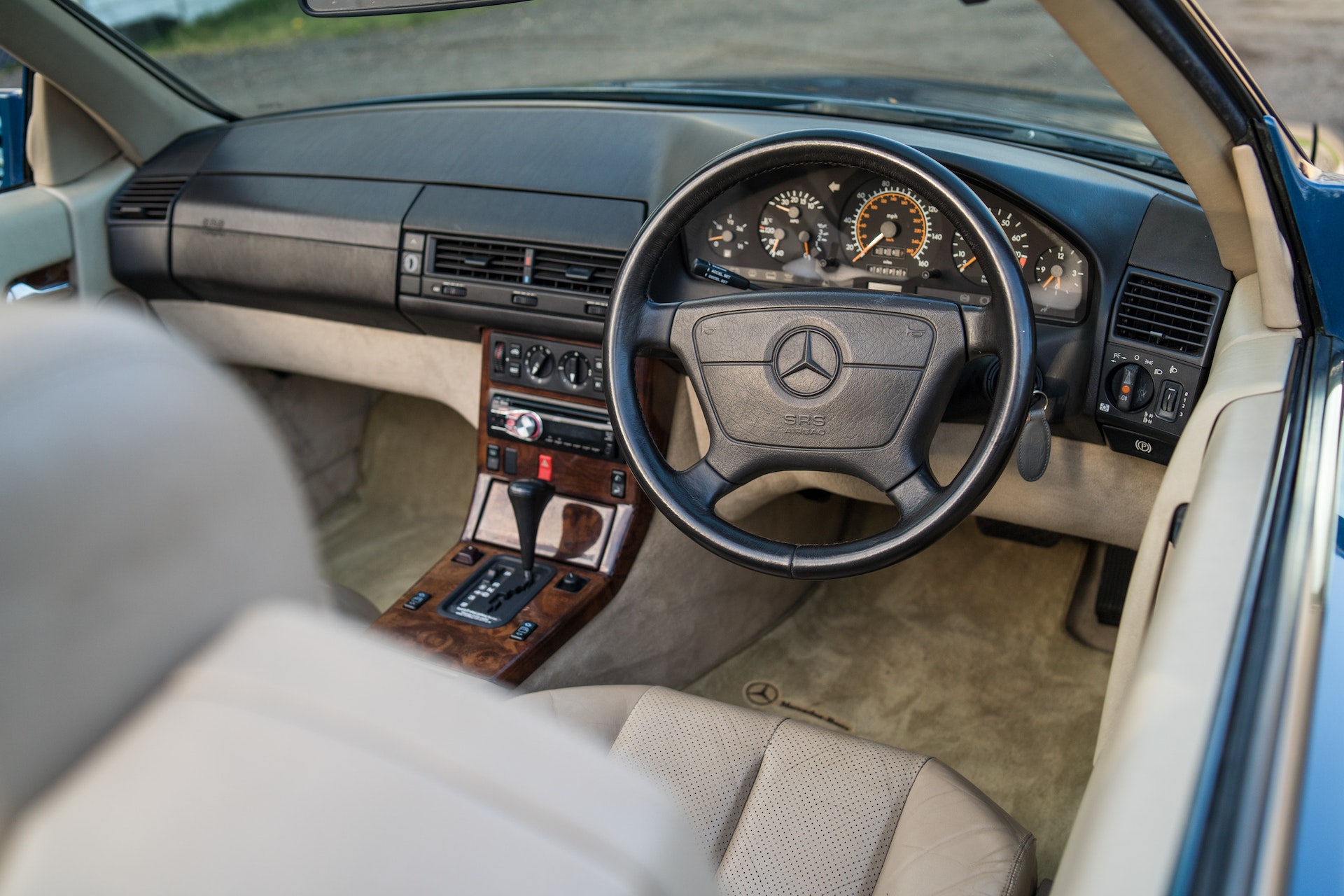 The headlining under the hard top has some sagging, and the smart walnut burl trims show very slight lifting at the edges around the electric seat controls. All of the switchgear is in good order, with no faults noted. Factory-fitted equipment includes air-conditioning and cruise control, and an aftermarket JVC stereo is fitted, along with a 10-disc Sony CD changer. 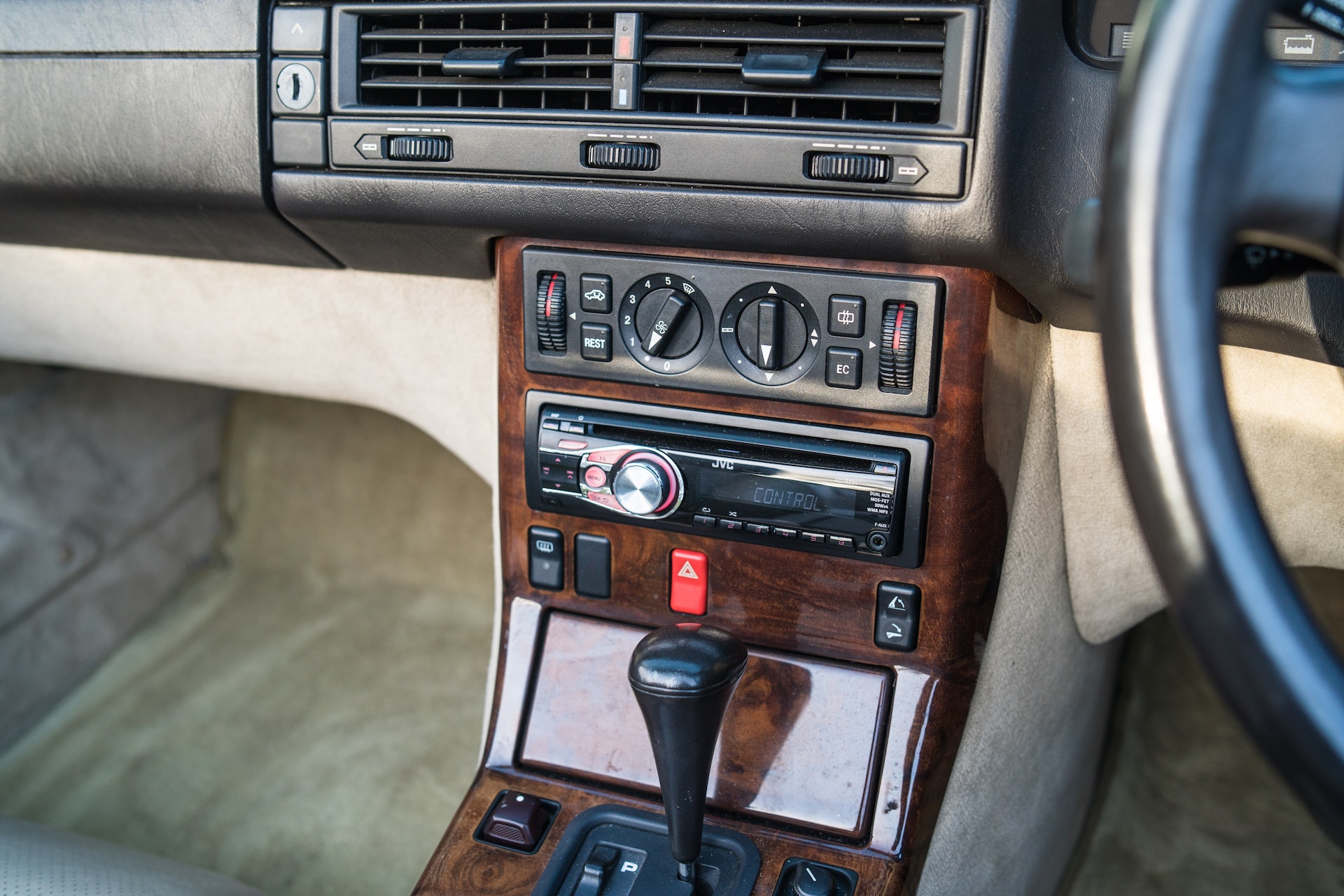 The majority of the car’s mileage is documented by comprehensive service history. Over the last 15 years, the car has seen far less use, and it has been maintained by the owner throughout that time. It benefits from a recent engine oil and oil filter service, along with a new distributor cap and rotor arm. The seller reports that the car starts, runs, and drives very well. 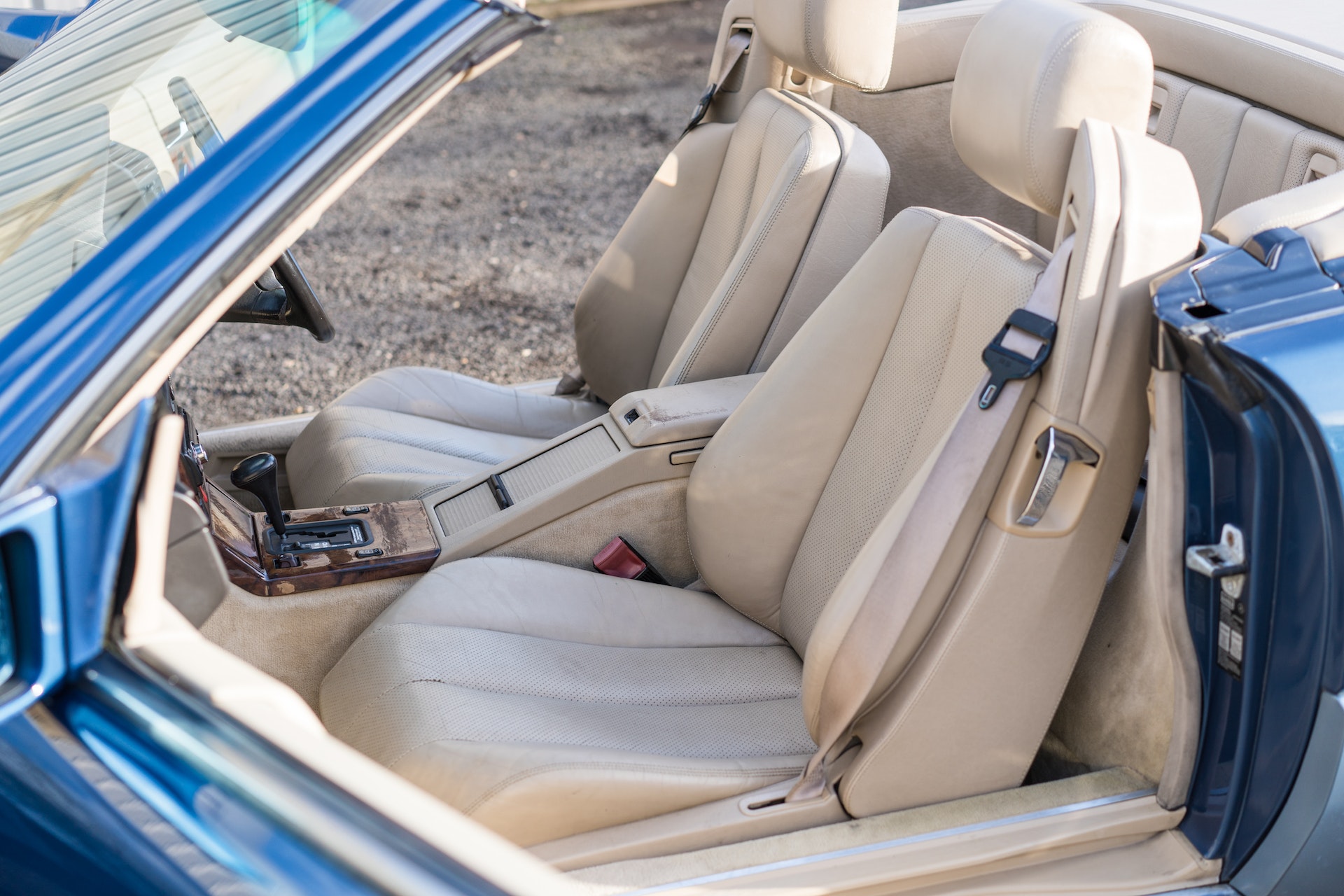 Its most recent MOT test was carried out on 12 August 2019 at 155,508 miles, which resulted in a first-time pass with only a couple of advisories. The first was regarding worn tyres, and the rears have since been replaced with Pirelli P Zero items in size 265/35 R18. The front tyres are 245/40 R18 Bridgestone Potenza items, and while still legal, the seller would recommend they are replaced before any extensive driving. The second advisory noted some surface corrosion on the coil springs, but the seller believes this was an over-cautious note where some powder-coating had perished, and he welcomes any inspection. 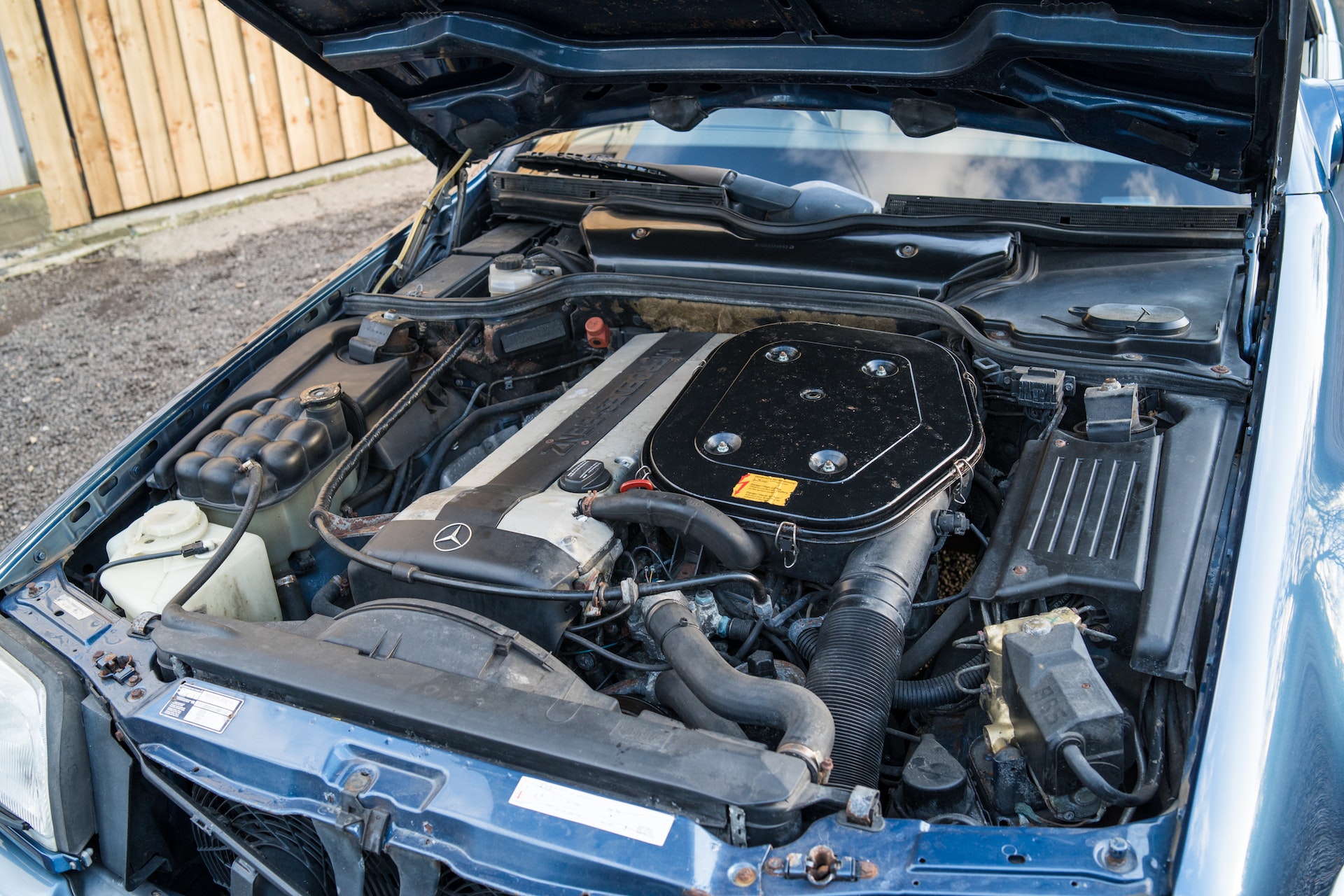 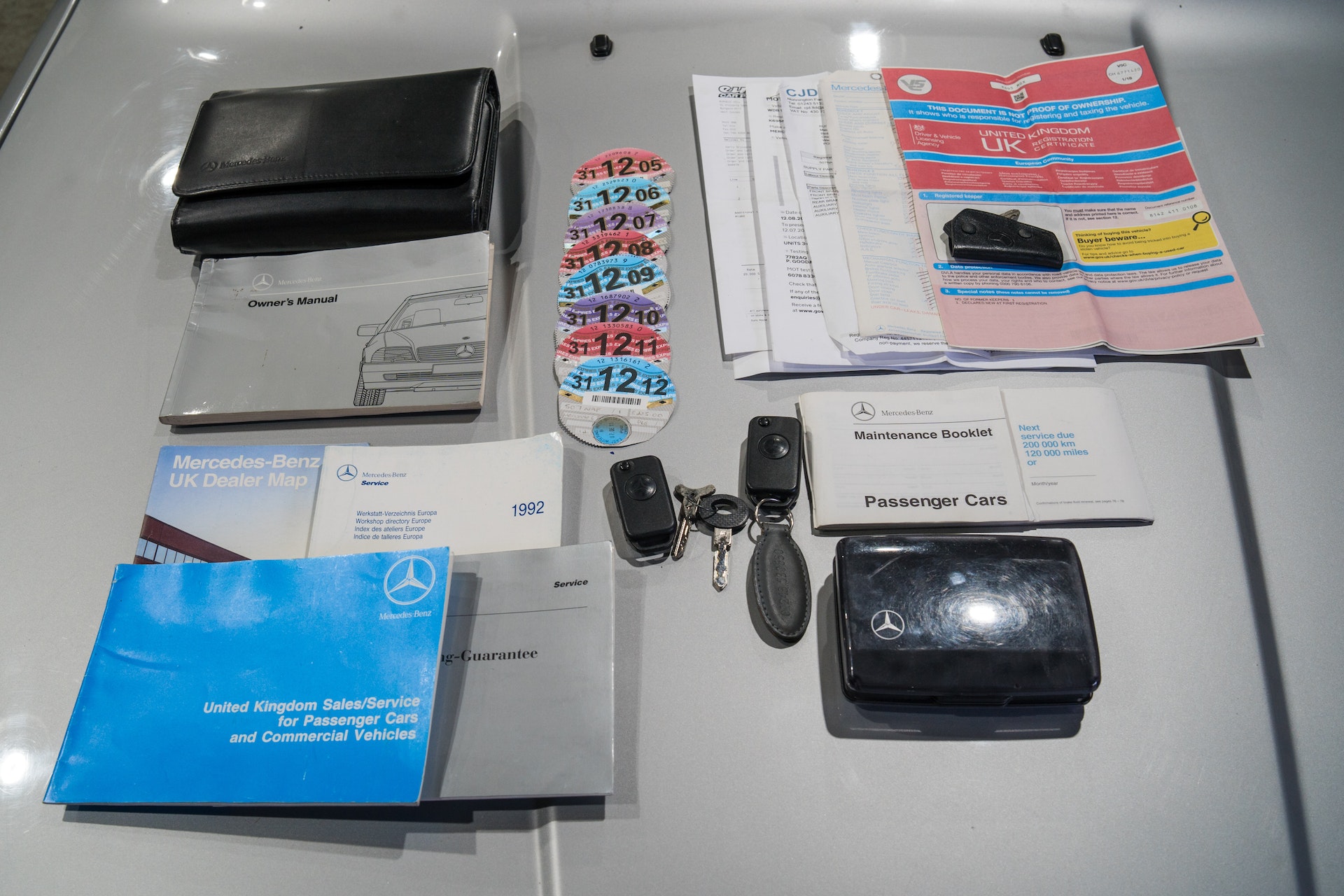 Writing about the 300 SL-24 for Motor Sport magazine in December 1991, journalist Jeremy Walton stated that it was: “the finest of touring 2+2s, one that pampers its owner beyond belief, and yet remains fun to hustle in an ungentlemanly manner”. 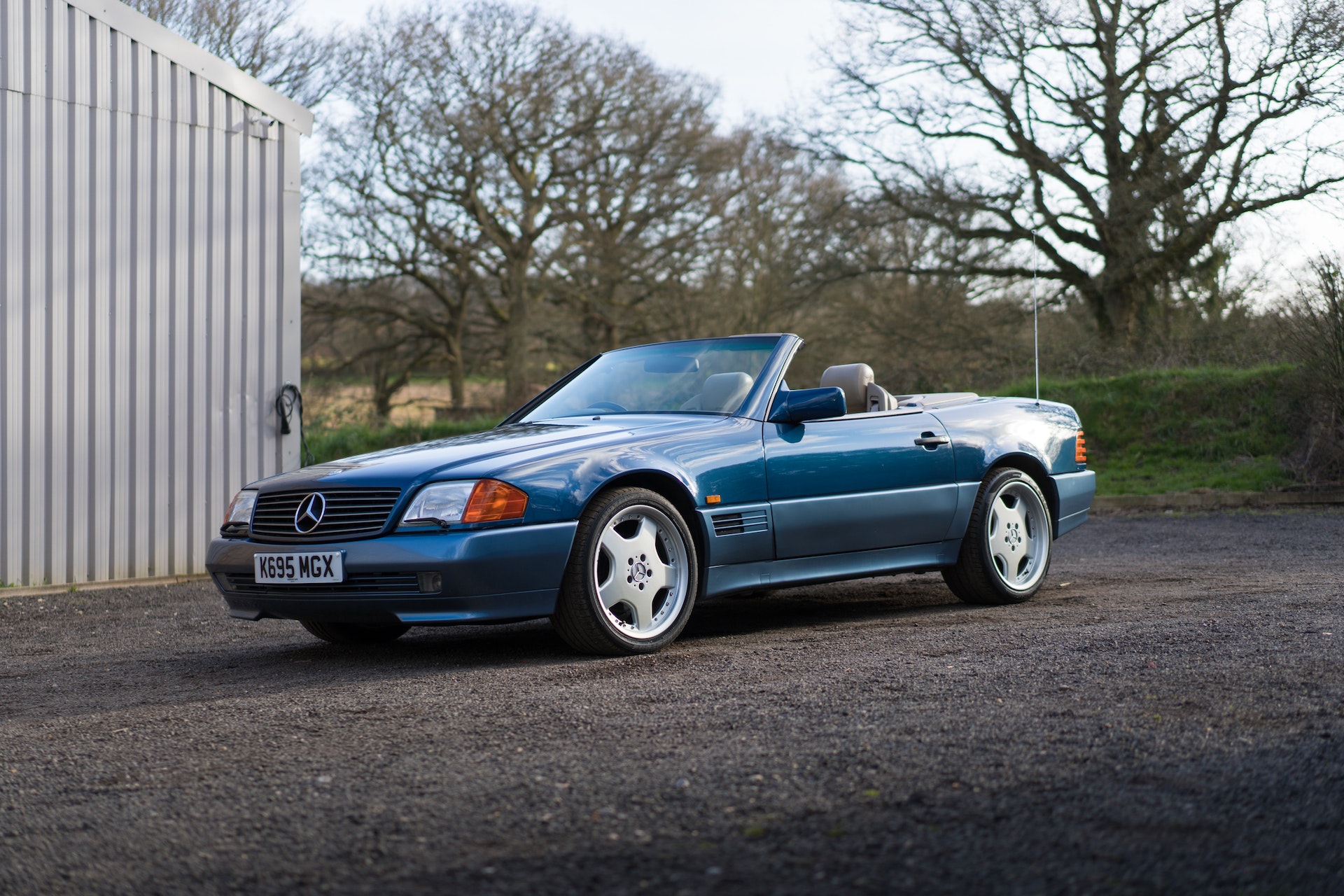 This Mercedes-Benz 300 SL-24 is a stylish modern classic in a great colour scheme. The seller reports that its high-revving straight-six engine makes it a joy to drive, and that it is wonderfully comfortable for long-distance journeys. The next owner could choose to rectify some of the cosmetic blemishes if they wish, but there is no reason that the car cannot be used and enjoyed as-is. Whatever they choose to do, this should prove to be a great value cruiser.