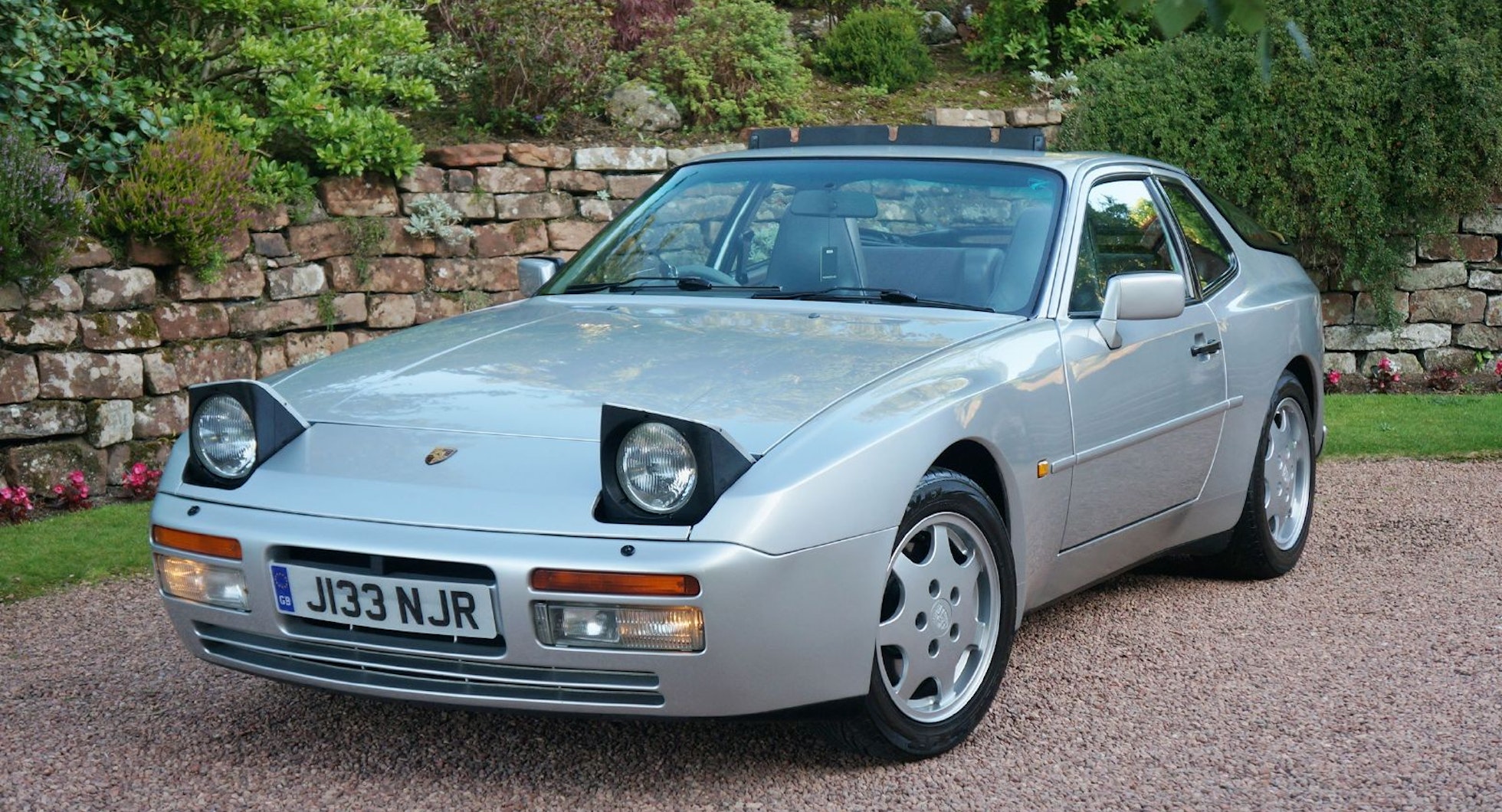 This 1991 Porsche 944 S2 is a handsome modern classic presented in outstanding, time-warp condition. Power comes from an aluminium-block 208bhp 3.0-litre engine, driven through a five-speed manual transaxle. The appearance of this car belies its mileage, with the bodywork and interior both to show-quality standards. 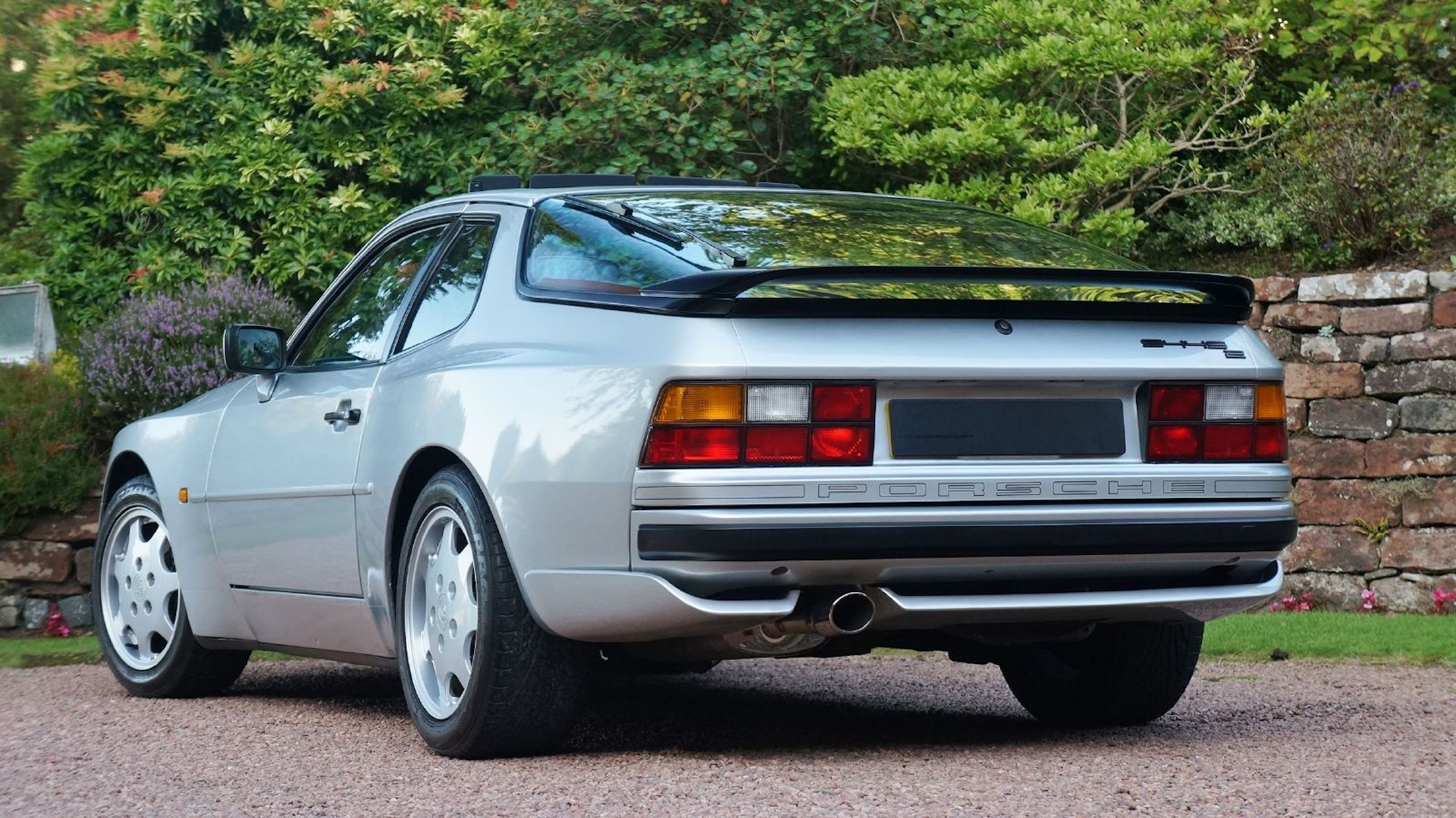 An original UK-delivered right-hand drive example, this 944 S2 was supplied new via JCT600 and first registered on 17 October 1991. It has evidently been well cared-for by owners throughout its life, and is now offered for sale in superb condition, ready to be cherished by another enthusiast. 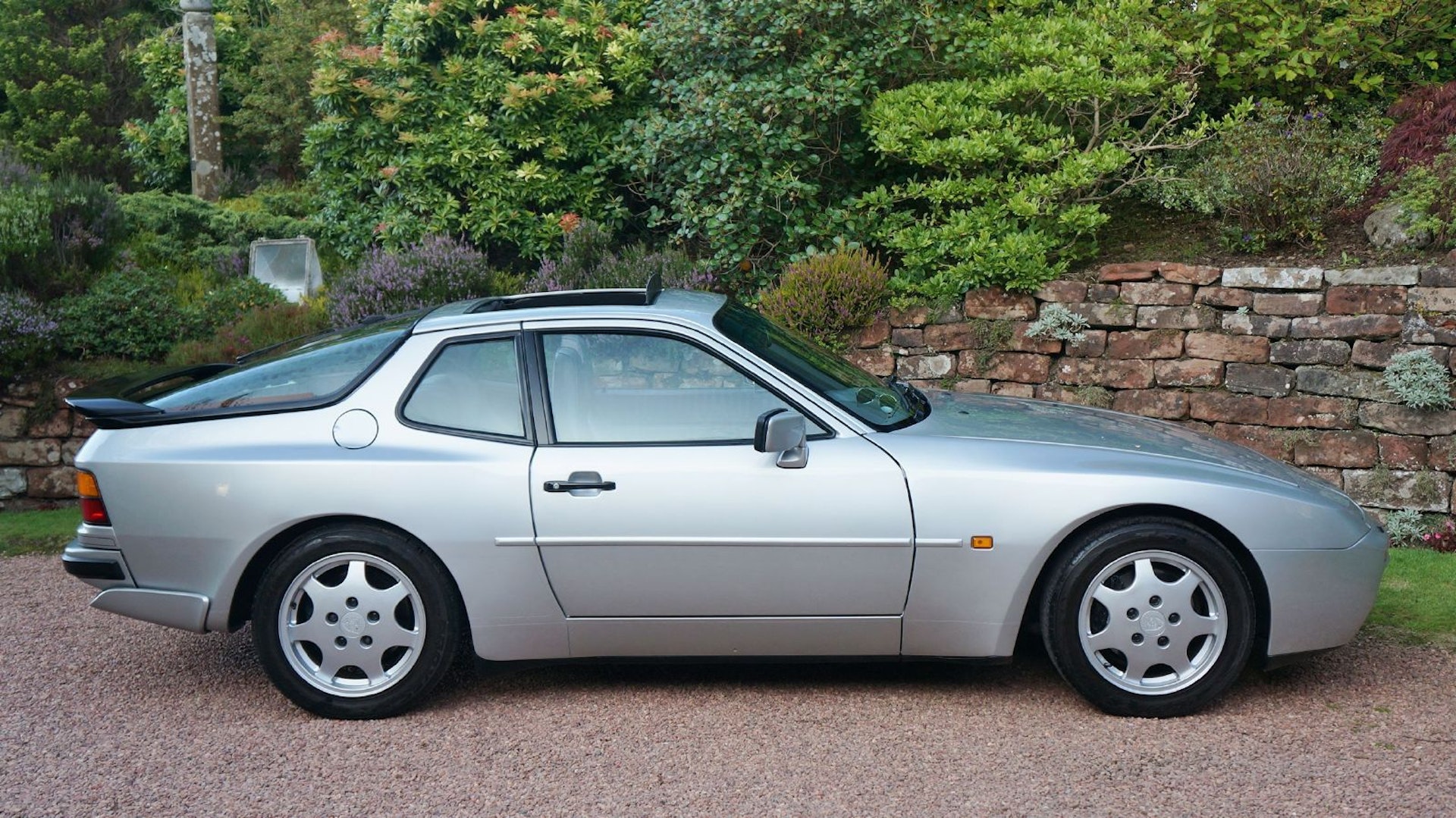 Its Crystal Silver paintwork is a relatively rare colour option, which was not available until very late into the 944’s production run. Its metallic finish has no concerning imperfections - there are only a few stone chips to note. All of the black exterior trim and rubber seals that can perish over time are in superb order on this car. It is fitted with the later style 'bridge' spoiler, which has perfect rubber trim and clean edges around the glass. 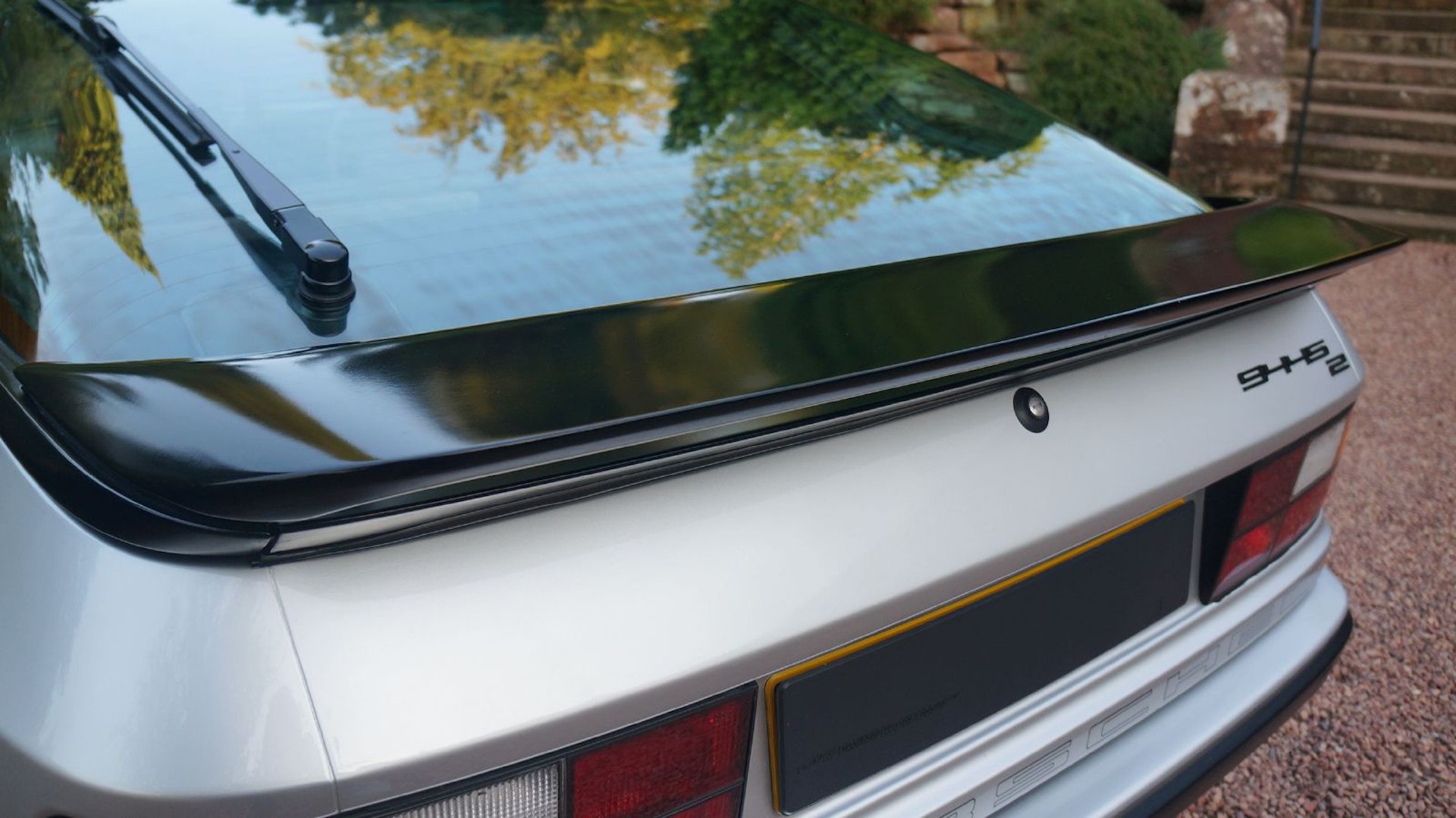 The sills, which are often problem areas on 944s, are entirely rot-free on this car. Opening the access vent in the door frame reveals that they are preserved well with a thorough application of underseal. The car’s bottom half had a respray in 2013 by RPM Technik, which has helped to keep it in great condition. The correct stone guard finish is present on the sills and the clear vinyl protectors ahead of each rear wheel are in perfect order. 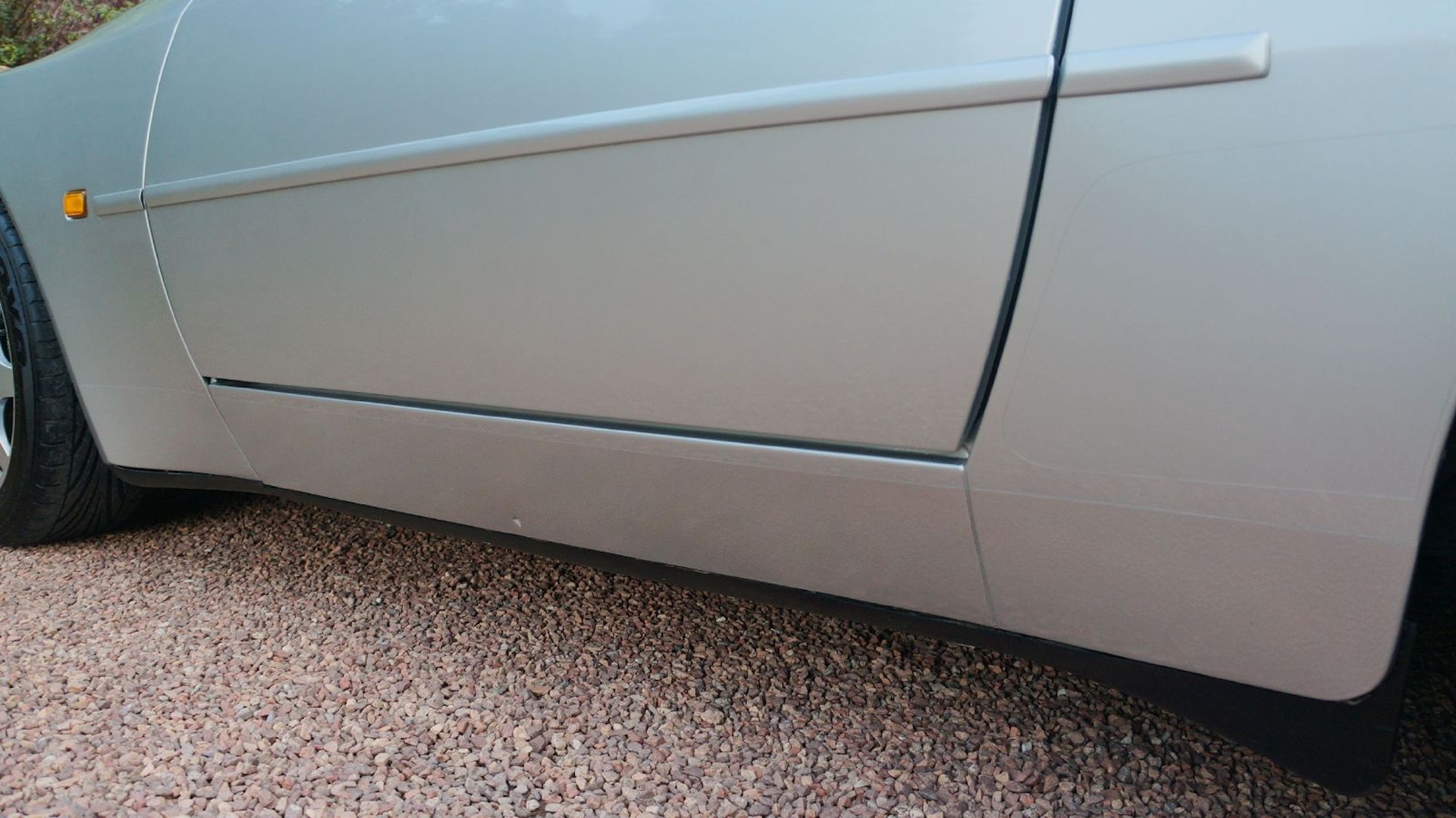 A thorough inspection of the photos in the media gallery below shows that all of the shut lines are as they should be. The sill trims that are unique to the S2 and Turbo models are present and fit snugly. There is no surface corrosion to any of the wheel arches or behind the rear wheels, and no rust or blistering around the windows or front screen. All of the light fittings and lenses are in good order with no cracks, condensation or water ingress. 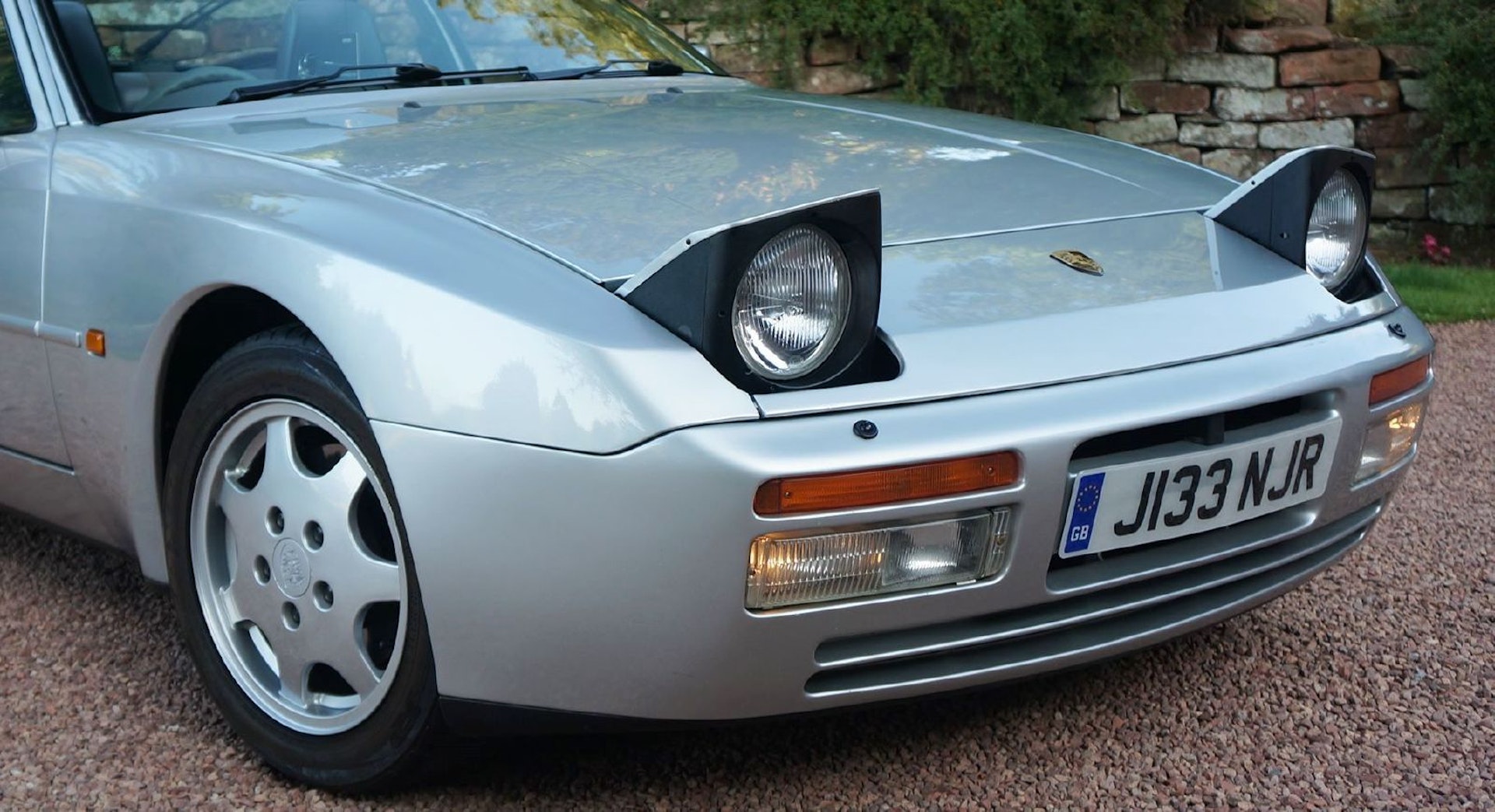 Filling the wheel arches is the original set of 16-inch ‘Design 90’ alloy wheels. The rims are in great shape with well-defined stampings by the valves, and each one has a metal centre cap, as well as smart black wheel bolts with no corrosion. 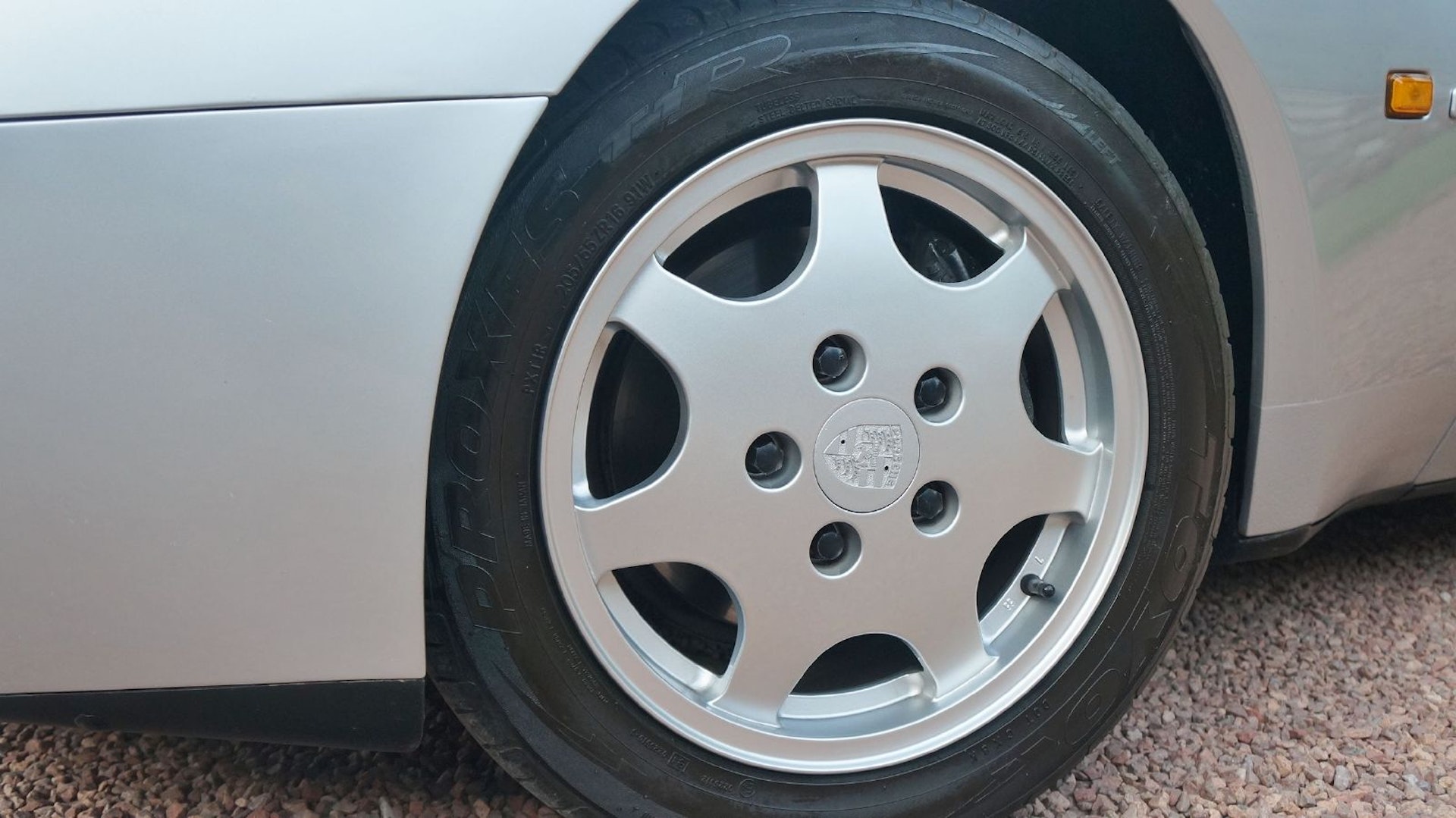 The interior of this 944 S2 is trimmed in half leatherette and half Script cloth in Graphite Grey. The upholstery is all original and is in excellent condition, with only a small nick on the driver’s seat bolster, while the steering wheel has been re-connolised and now looks like new. The dashboard is in pristine order with no cracks. Carpets and overmats are in very good condition throughout, with no missing push-in tacks or buttons. The removable sunroof works perfectly, and the original storage bag is still with the car. 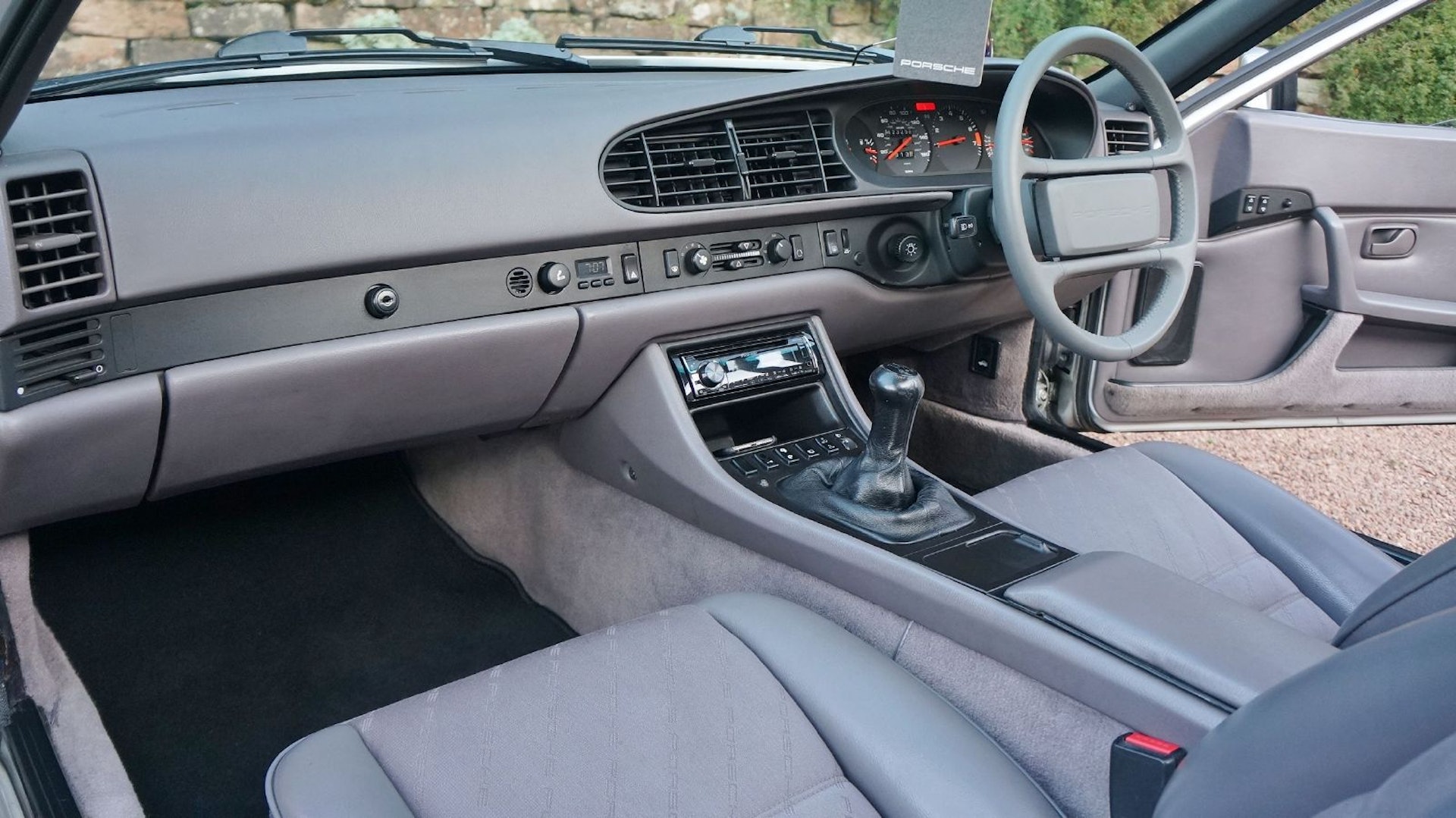 Interior specification includes standard comfort seats with electric height adjustment, climate control, a top-tinted windscreen and electric windows. All of the driving controls, including the gear knob, work perfectly and present superbly. There are no known faults with any of the electrics. The direction switches for the seat adjustment as well as the door mirrors function correctly, and the LCD clock is also working as it should. 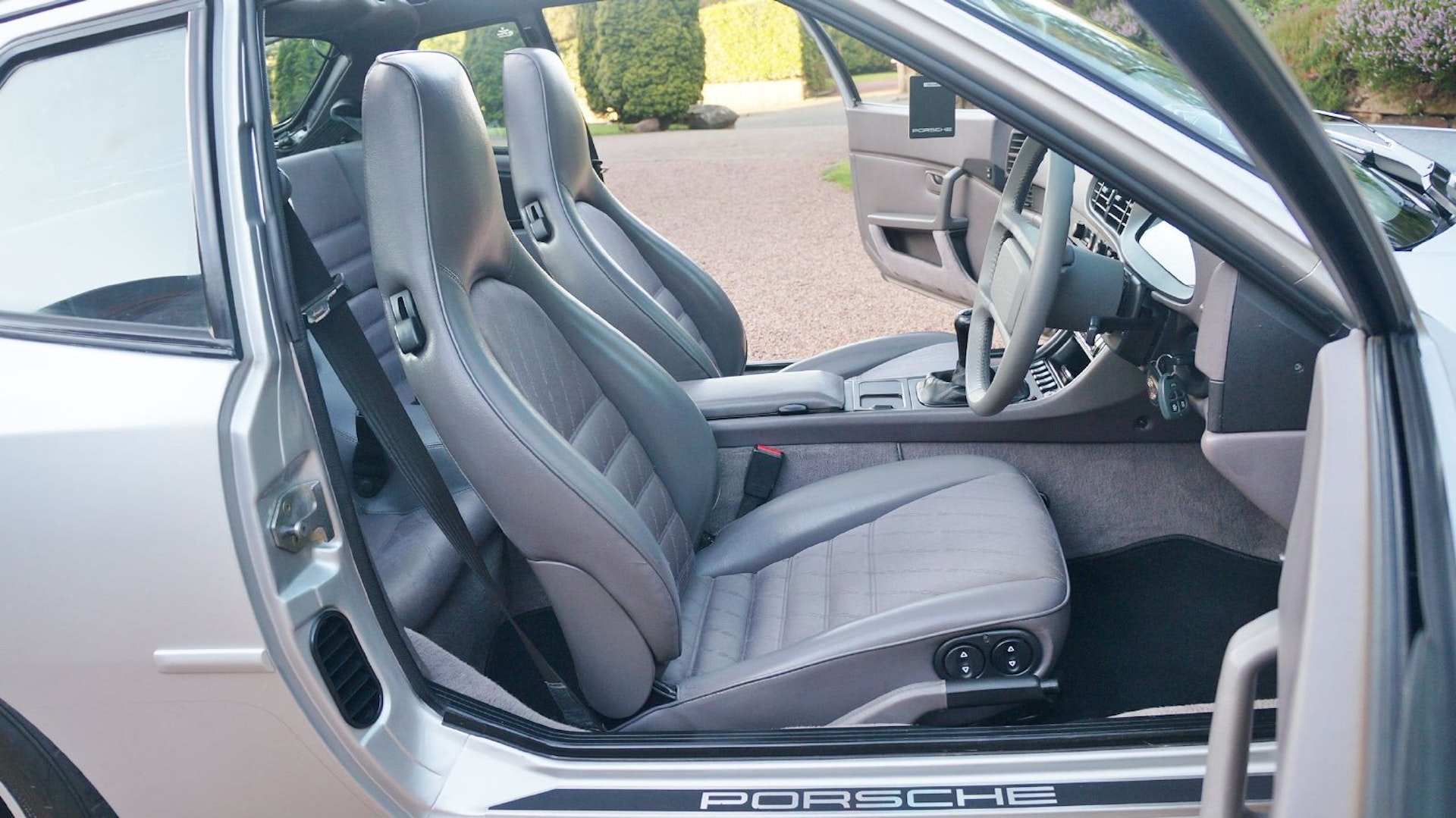 The rear seats are the later split-fold type so it has a soft fabric rear blind, which is in very good order, free of any fading. Upon opening the rear hatch, you will appreciate that there is no corrosion around the boot latches, that the rubber trim is in perfect condition, and that the gas struts still hold the weight of the hatch without dropping. Beneath the boot carpet, the spare wheel, a complete tool roll, and the suitcase-style Porsche air compressor are all in pristine condition. 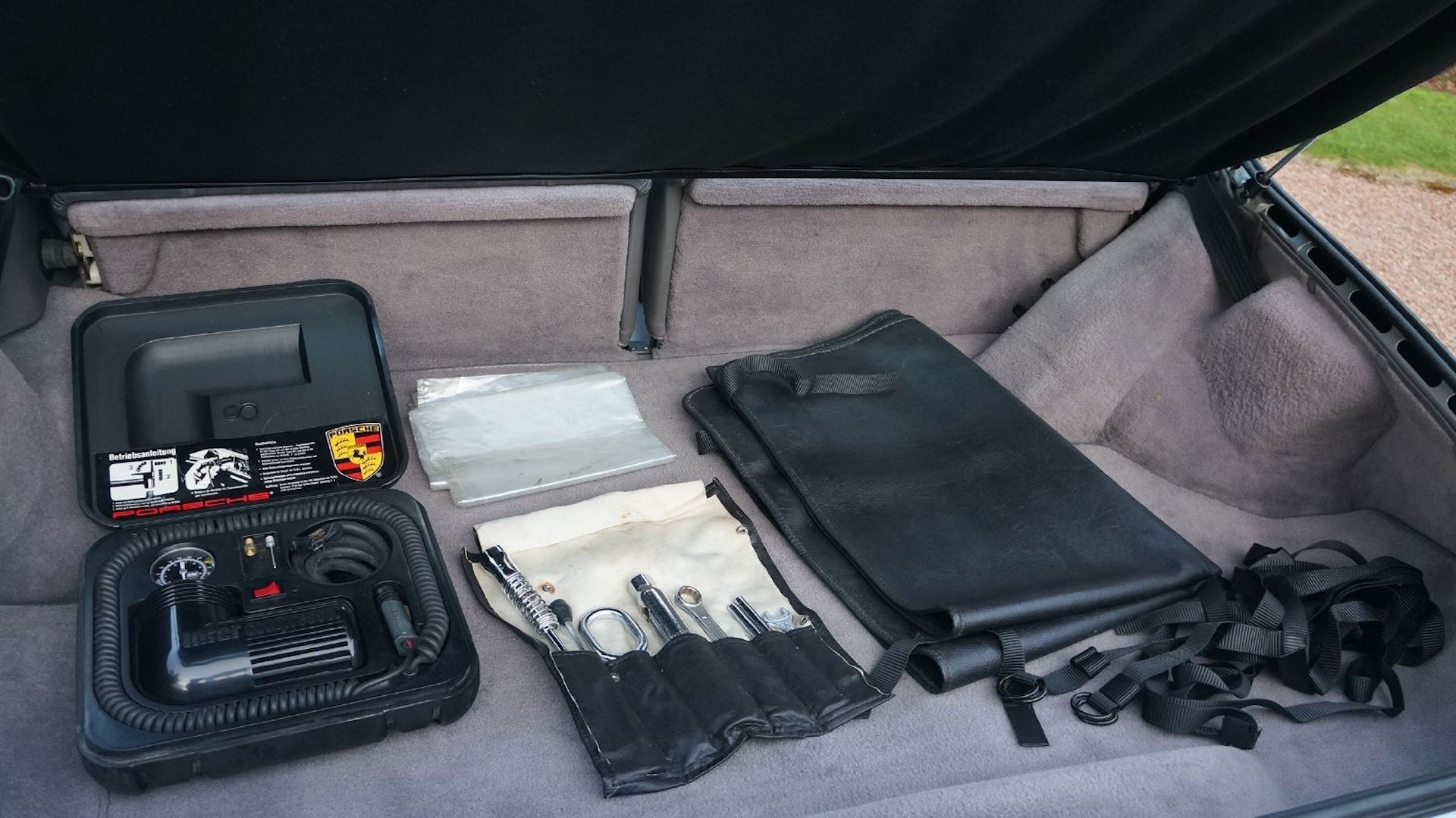 Under the bonnet is the smooth 3.0-litre dual-overhead-cam 16-valve unit, which was the largest production four-cylinder engine of its time. The mechanical specification for the S2 also included the four-piston brake calipers from the Turbo model, as well as an uprated gearbox, stronger driveshafts and wider wheels. 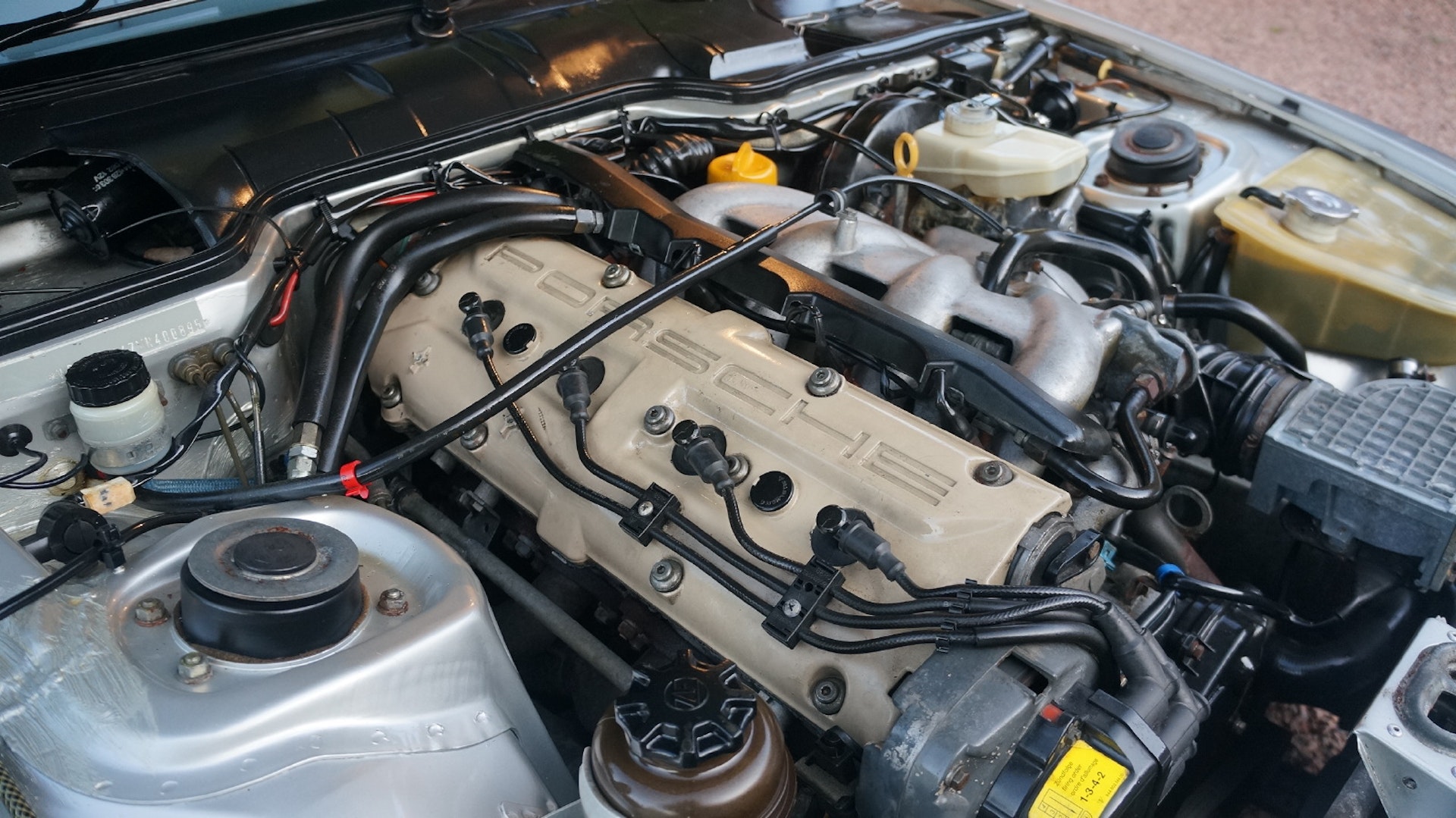 The engine bay looks immaculate, and its impressive appearance reflects its top-notch mechanical condition, which is backed up by an extensive history file. As well as having the original stamped service booklet, the car comes with a raft of detailed invoices covering nearly three decades, showing tens of thousands of pounds spent to keep the car in fine fettle. 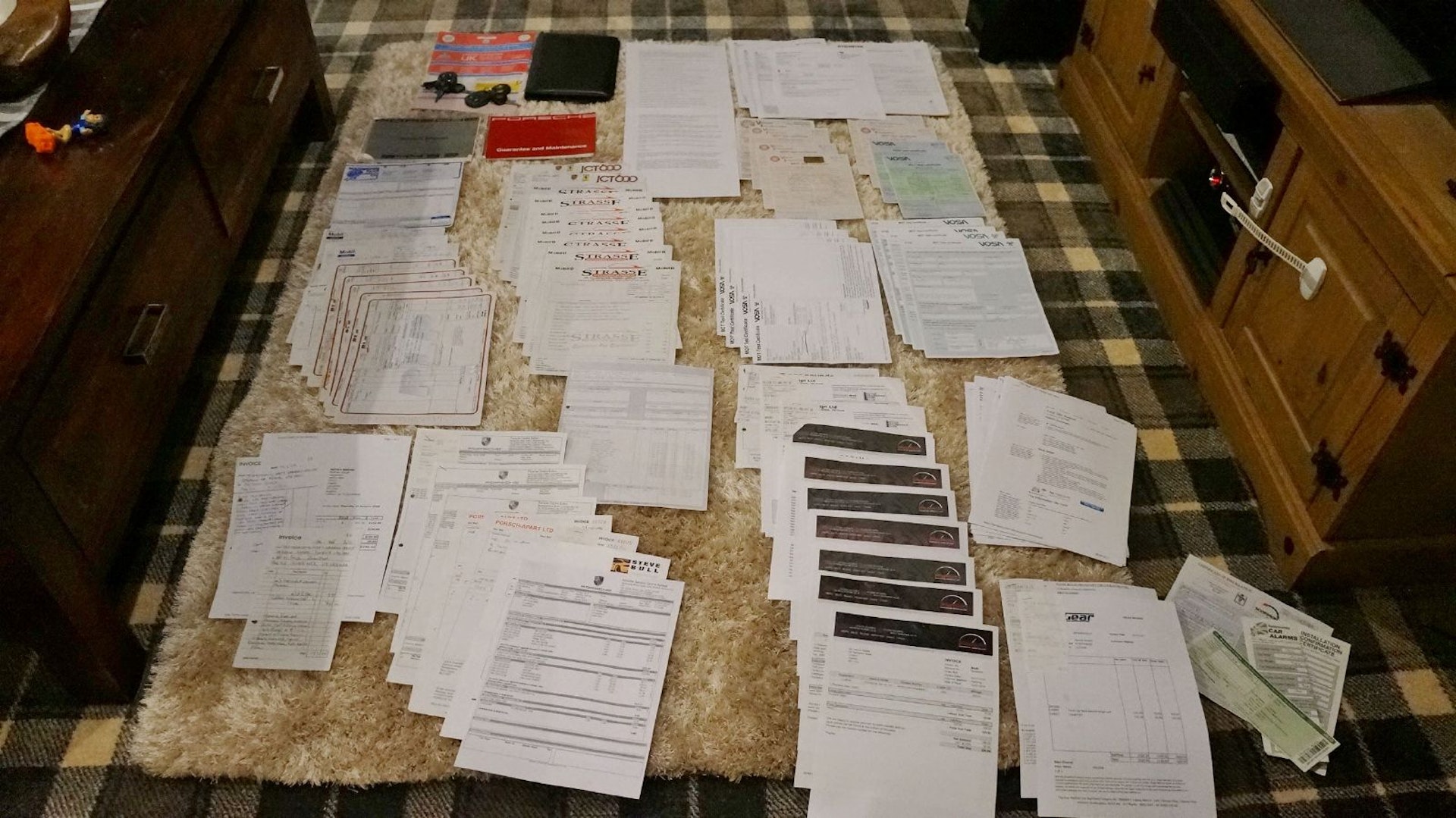 Its documented scheduled maintenance is summarised at the end of the listing. Over the course of its life the car has had two clutch replacements and five timing belt renewals so far, with the latest change of the timing and balance belts done by Porsche Centre Byfleet (now Porsche Brooklands) less than 5,000 miles ago. The rollers, tensioner, idler and belt adjuster were all renewed by the OPC at the same time. Within recent years, the car has also received a new catalytic converter, rear exhaust box and rear main seal (RMS); a new battery, replacement seat motor and door lock catch; and a new clutch kit, fork and roller bearing. 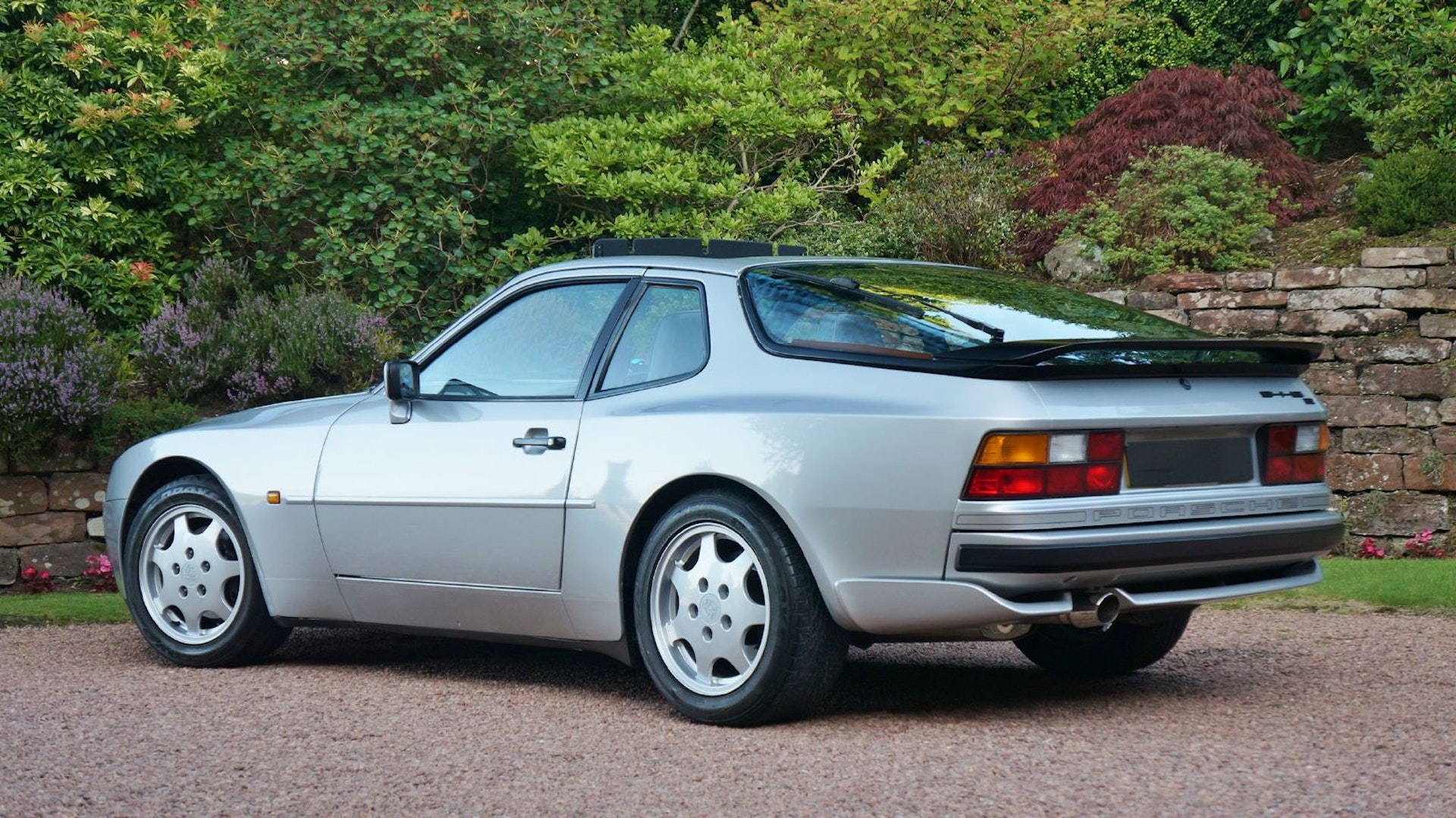 The car has also received a full front brake overhaul, including stripping and rebuilding the calipers, refurbishing of the brake plates, new discs and pads, as well as replacement flexi hoses and air deflectors. Miscellaneous ad-hoc repairs have also included a new heater resistor, seat adjuster switches, exhaust rubbers and unblocking of the washer jets. 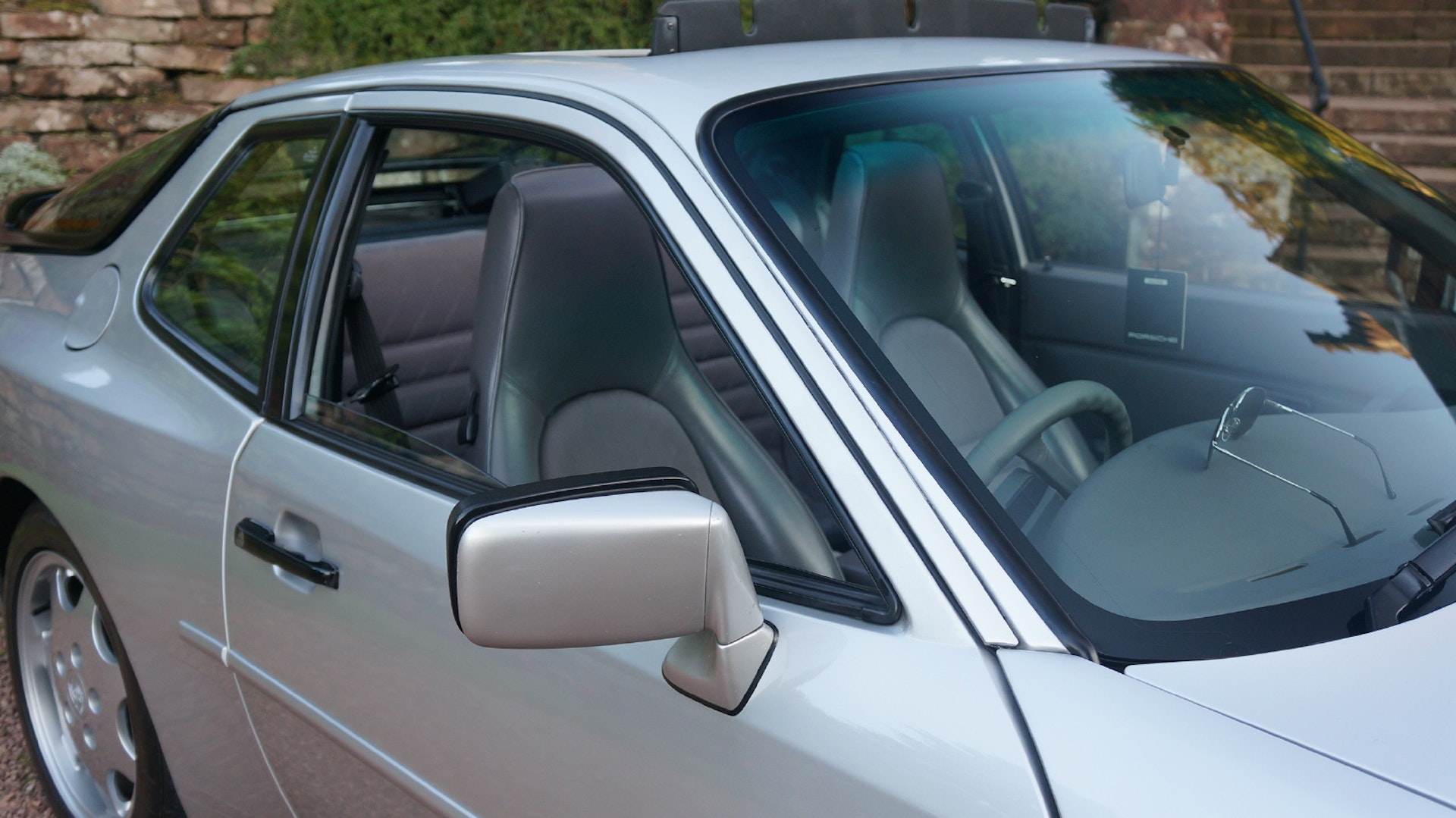 Over the last decade and 10,000 miles on the road, the car has been put through 10 MOT tests. With the exception of a temporary failure because a headlamp aim was too high - which was rectified and retested immediately - the car has not even had one advisory during this period. This is a car in genuinely remarkable condition. Its last MOT was at in December 2018 at 123,214 miles. The wheels are shod in Toyo Proxes T1-Rs all round, in size 205/55 ZR16 at the front and 225/50 ZR16 at the rear, which have plenty of tread remaining. 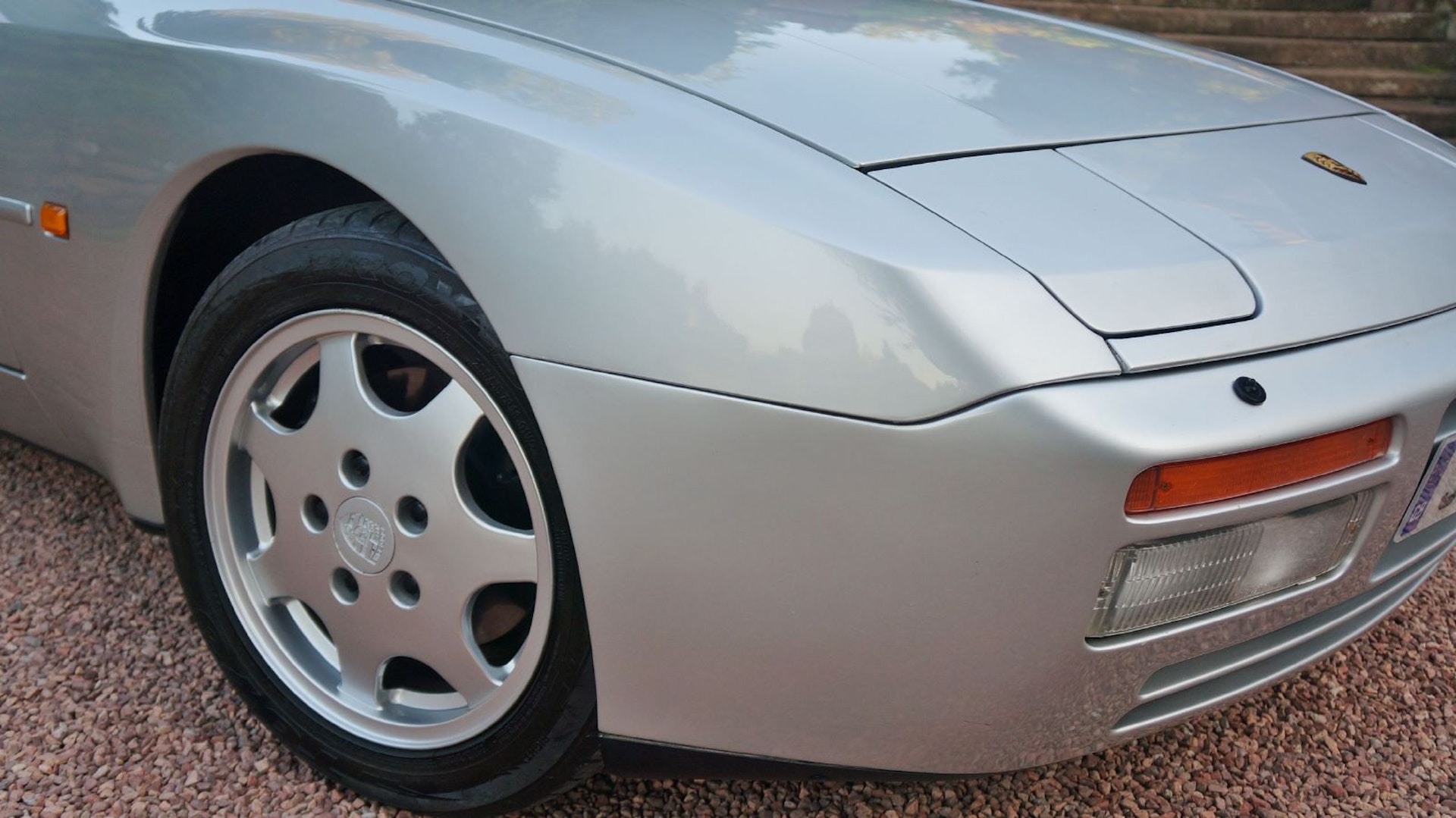 Accompanied by the original owner’s pouch, including handbook and stamped service booklet, this is a complete car in every sense. There are two original sets of Porsche keys and two remote fobs, while the factory-supplied spare wheel, jack, brace and tool roll can still be found in the boot. It comes with the original air compressor, as well as the sunroof bag, net and spare wheel carrier. Finally, regular maintenance throughout its life is documented in an extensive history file of paperwork. 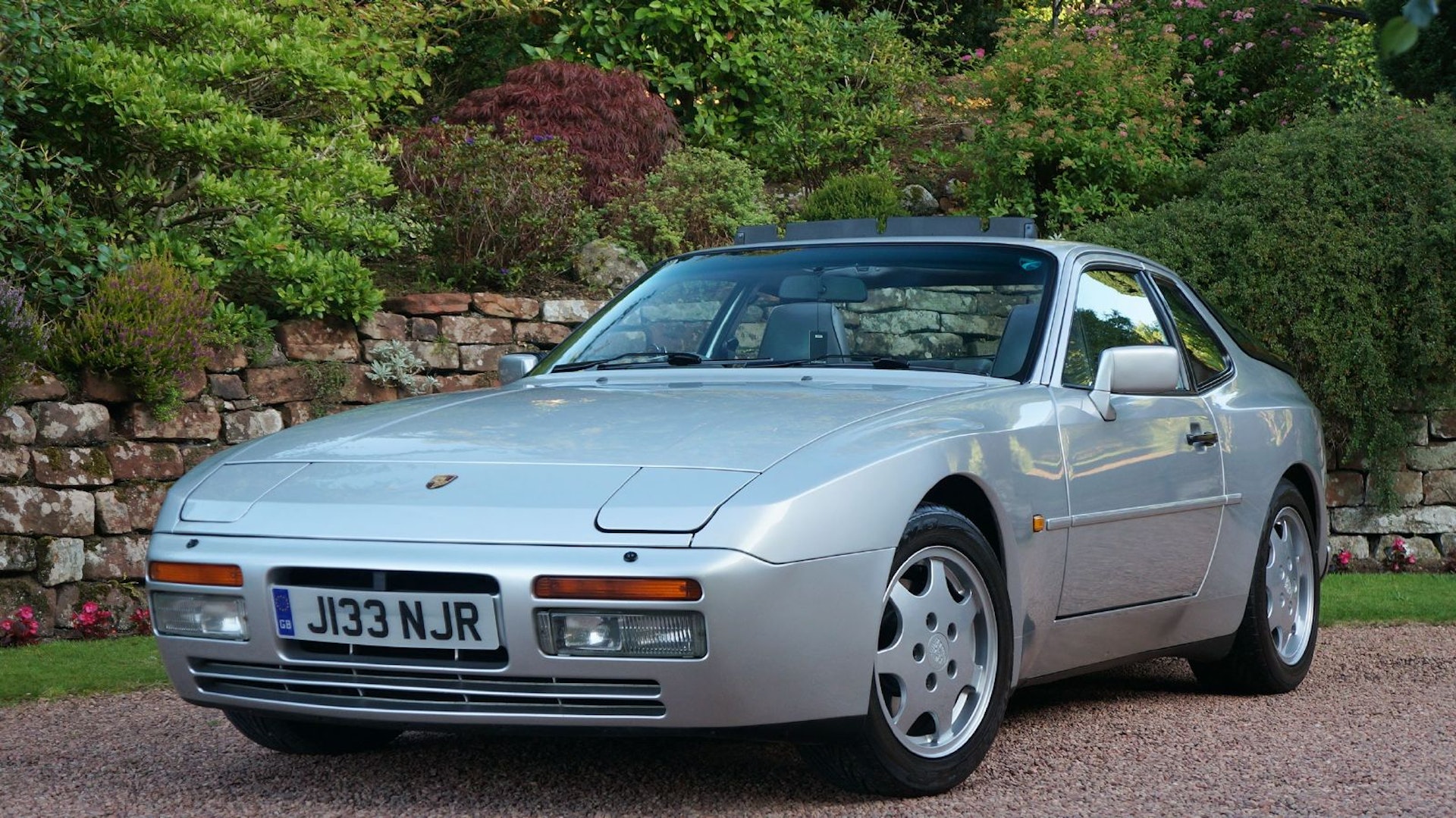 This Porsche 944 S2 is an outstanding example of the model, which is genuinely as good as it looks. The cosmetic condition will impress even the most fastidious of collectors, while the way it drives will certainly not disappoint either. It would be very hard to find another S2 that presents as well as this car, much less one that is also so well-documented and in such a rare and handsome factory colour scheme. This car deserves to be enjoyed on the open road, but it is of course also ready to attract envious glances at any regional, national or marque-specific show. 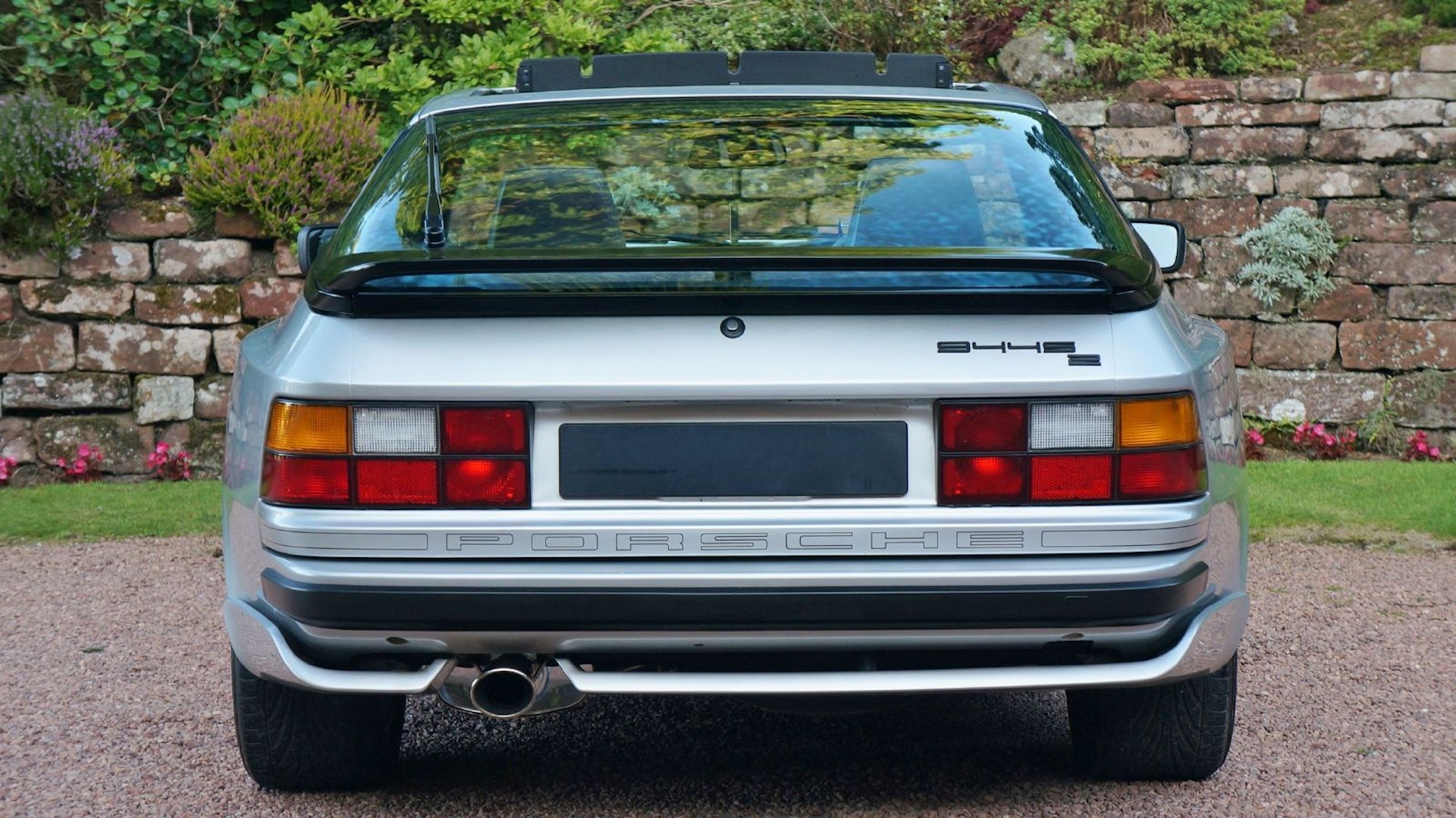