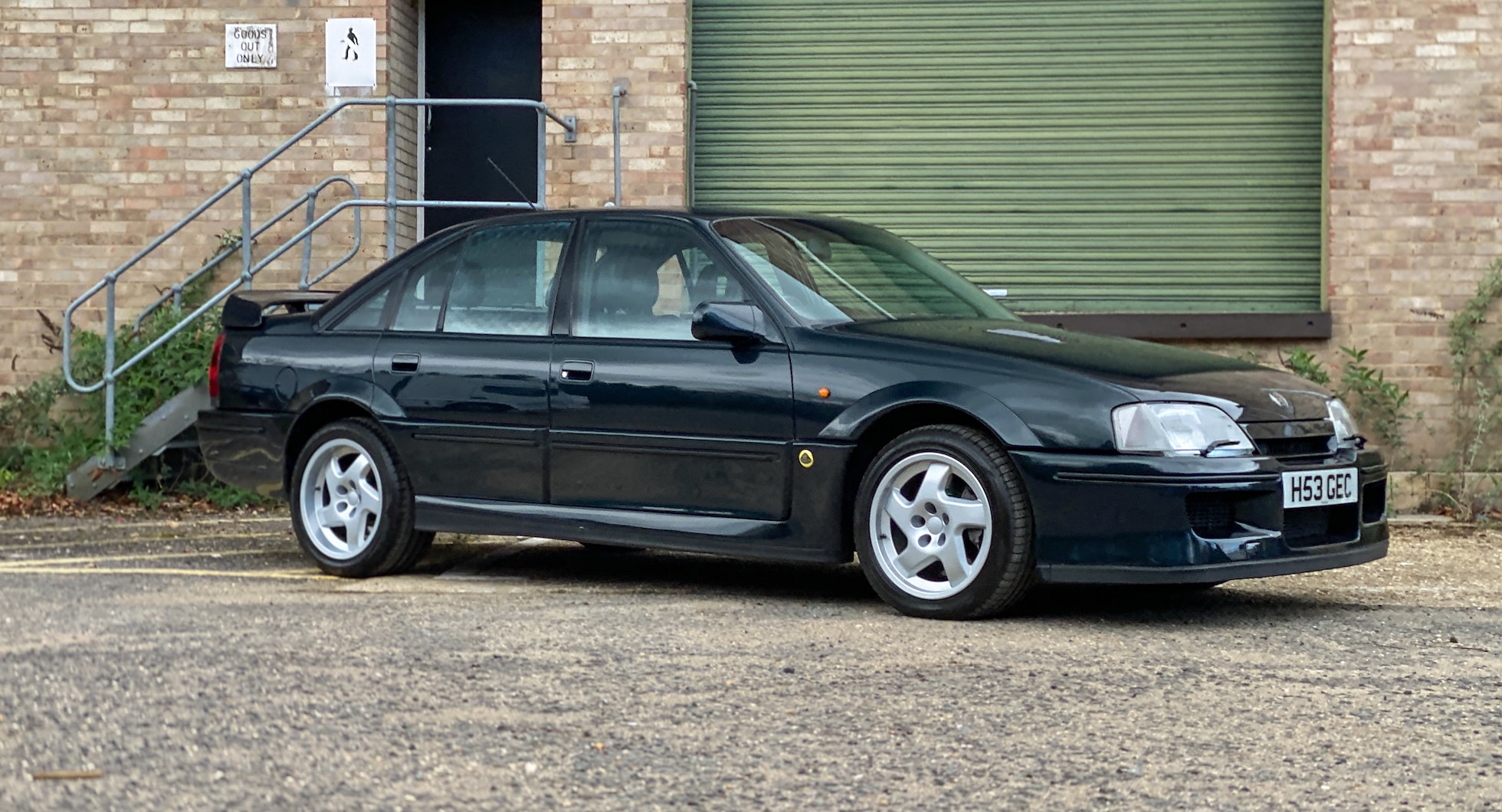 This Lotus Carlton is a giant-killing super saloon, presented in very good condition following a cosmetic refurbishment and mechanical overhaul. Its engine is the 377bhp 3.6-litre twin-turbocharged straight-six, with rear-wheel drive via a six-speed ZF manual transmission and limited-slip differential. The odometer shows 95,780 miles from new. 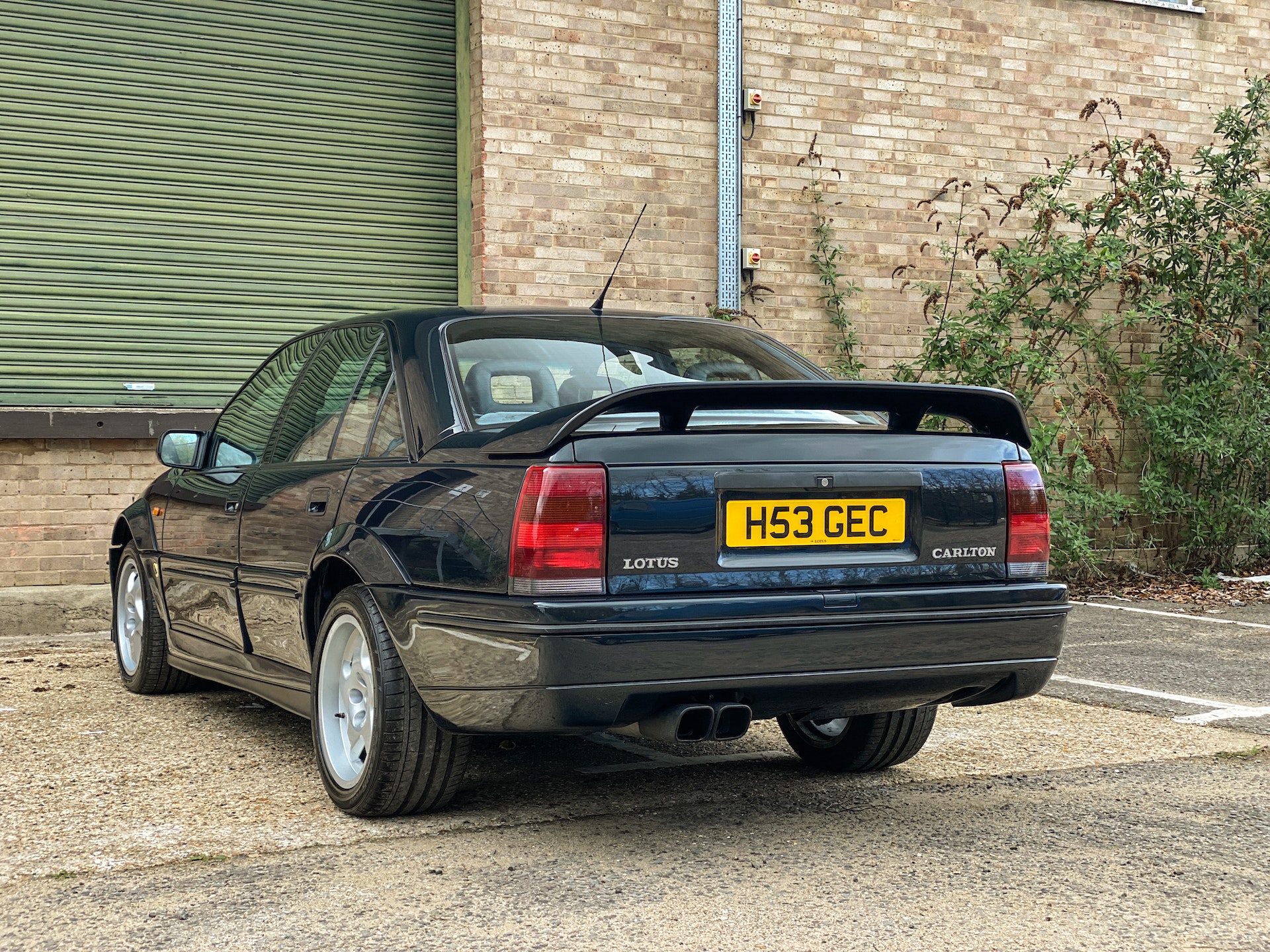 A product of the takeover of Lotus Cars by General Motors in the late 1980s, the supercar-baiting Carlton was created by first stroking the existing 3.0-litre Opel engine out to 3.6 litres. The cylinder block was reinforced, and it was given forged aluminium Mahle pistons and an uprated crankshaft. The pair of Garrett turbochargers had separate water cooling, helping the engine to run flat-out at maximum torque. It was equipped with ventilated disc brakes and AP Racing calipers developed from a Le Mans-specification Group C programme. 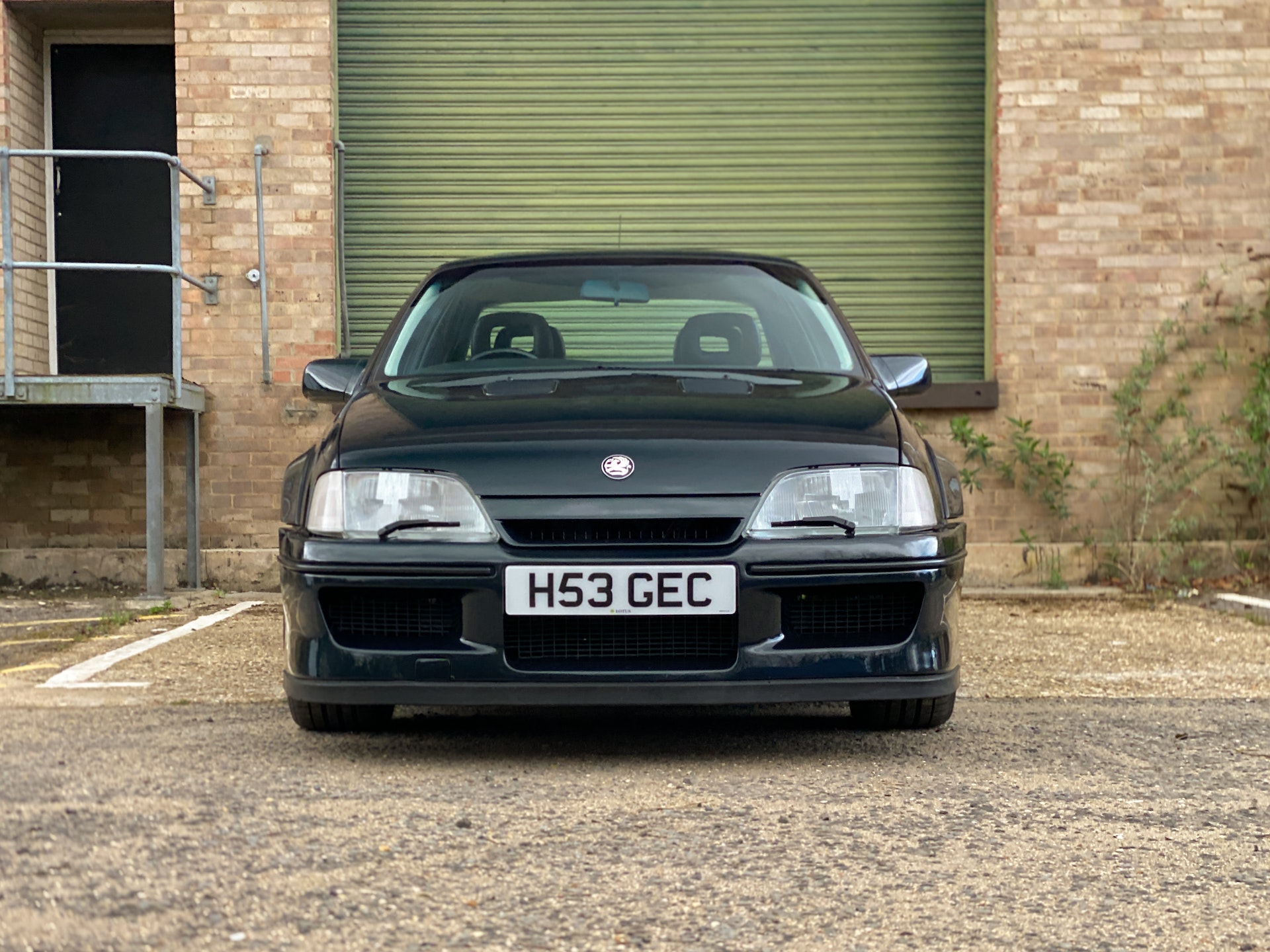 At launch, the Lotus Carlton was the fastest full four-seater production car ever made. It could sprint from 0-60 mph in around five seconds, and on to a top speed of 176 mph. This example is an original UK market car, number 73 of the 950 built, and was first registered in February 1991. There are just four previous registered keepers on the V5C log book, and the seller has owned the car for the last 21 years. It has been dry-stored for around a decade, but has recently been treated to a full respray, as well as comprehensive mechanical work. 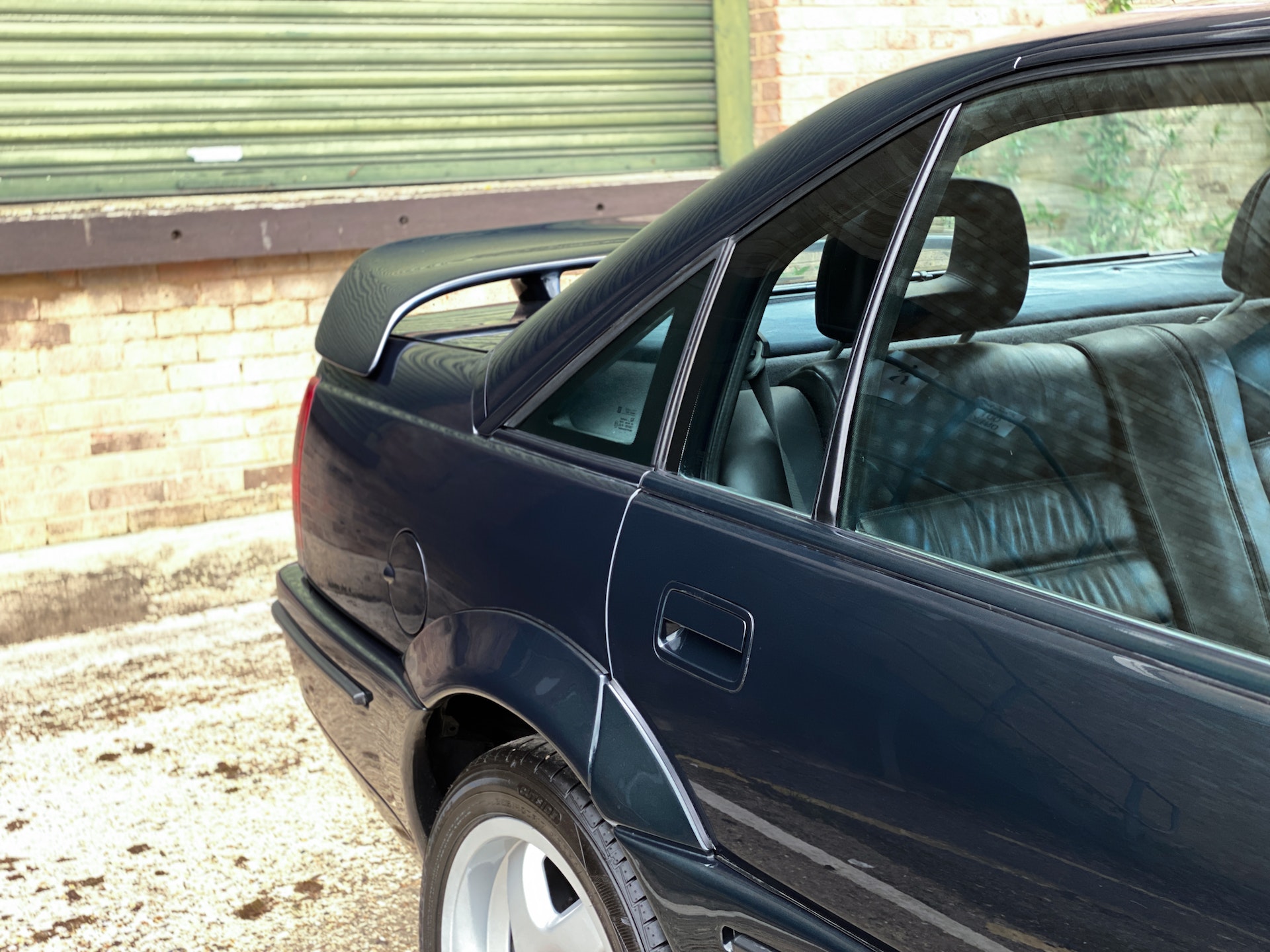 The bodywork of this Carlton is in superb order, with no dents or other damage to the panels. It is still fresh from a full-body respray in the original Imperial Green colour, so the exterior paint finish is in show-quality condition. The rubber seals, body trims and badges are all in great shape, and it retains the correct squared-off twin exhaust tailpipes. It sits on the original 17-inch five-spoke Ronal alloy wheels, which present very well, with no kerbing damage, and only a few spots of lacquer peel around the valve stems. 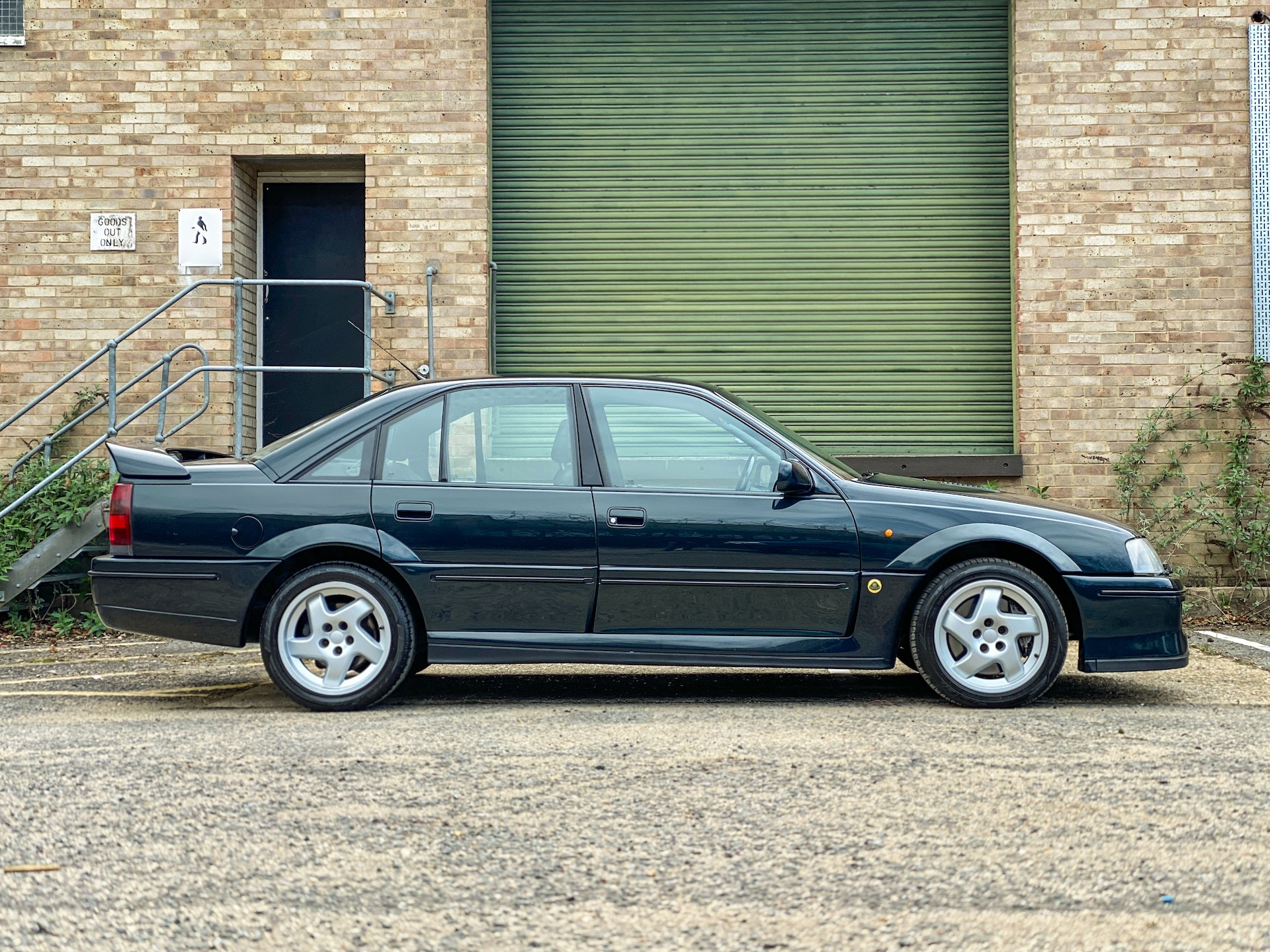 Inside, the cabin wears its mileage well. The upholstery is all the original Connolly leather that was fitted at the Lotus factory. While there is some wear and discolouration on the driver’s seat side bolster and shoulder cushions, the rest of the leather appears to be in very good order. The rear seats in particular show no signs of heavy use. 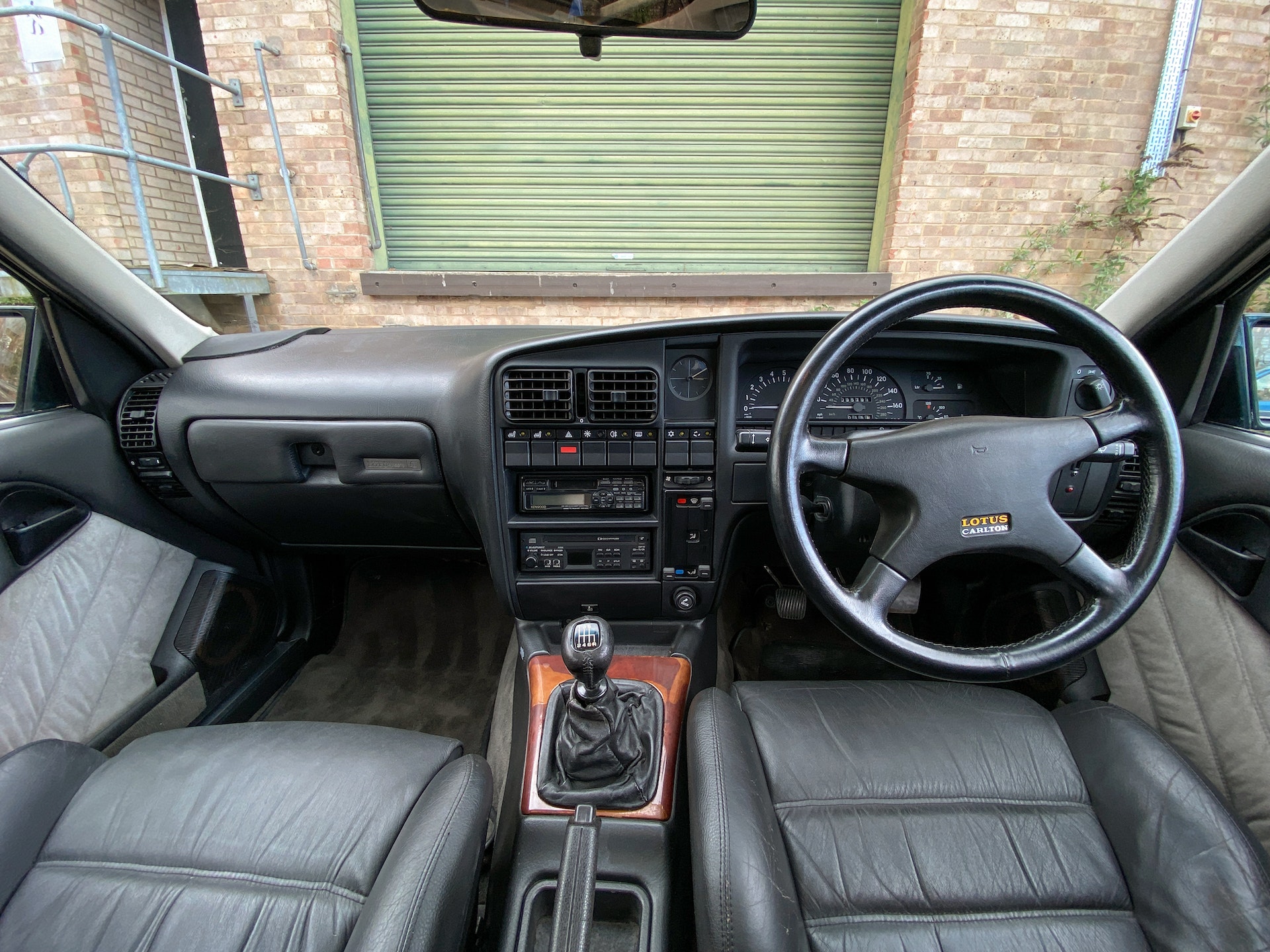 Above the front seats is a glass sunroof, which works as it should. The headlining is sagging and has become loose around the sunroof frame, but it has no rips or holes, and should be relatively straightforward to re-attach. The wood veneers on the driver’s door and around the gear lever have small patches of fading and delamination, as well as small cracks in the finish. It retains its original four-spoke steering wheel and leather-trimmed gear knob, as well as the Blaupunkt CD player. The main stereo head unit has been swapped for a later Kenwood item. 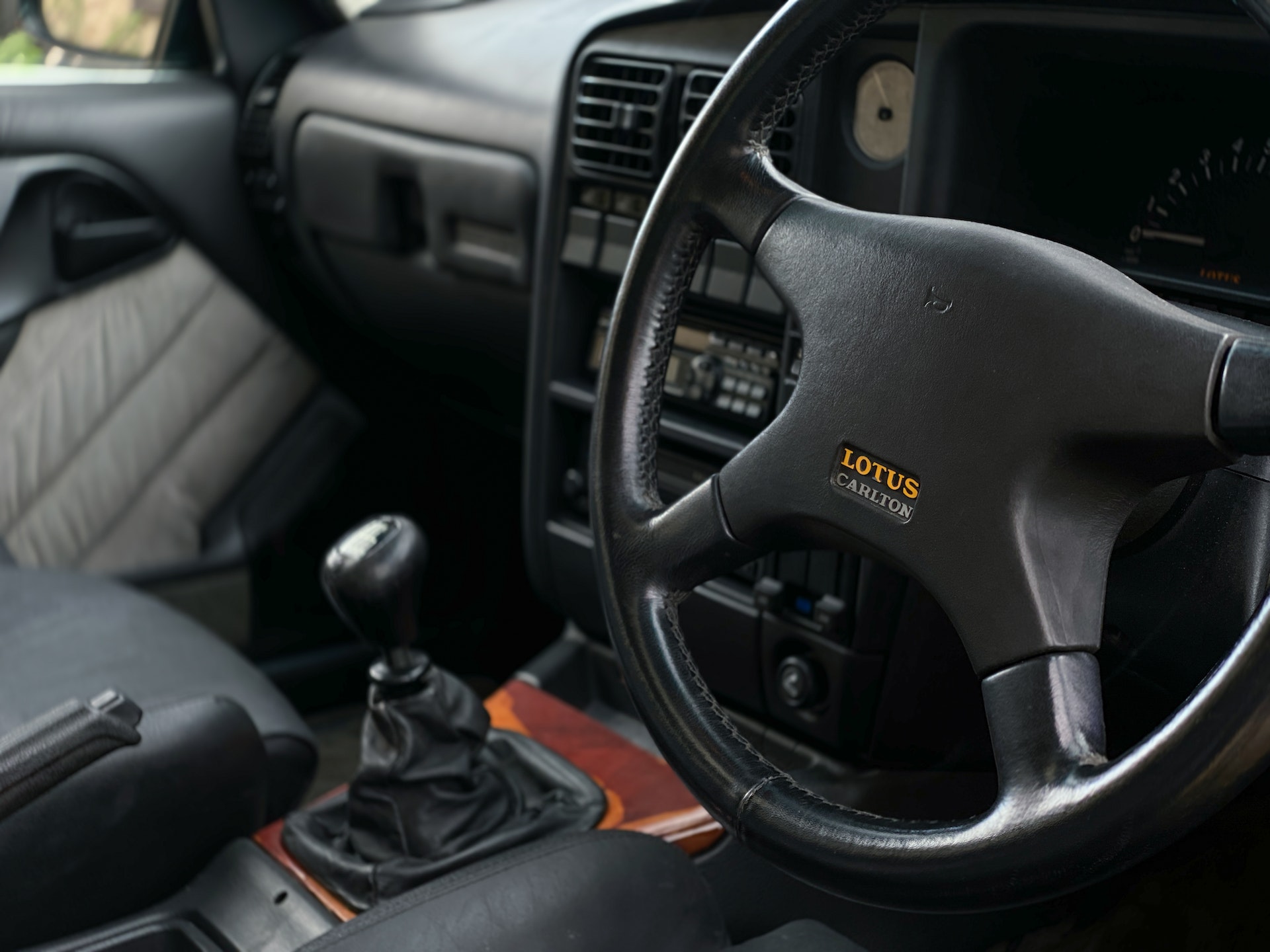 As the car had been stored for some time, Lotus main dealer Hofmann’s has carried out a full mechanical overhaul to ensure it is running and driving smartly. Beyond a full ‘fluids and filters’ service, the car has also been fitted with new brake discs and pads all round, new brake pipes, and has had the AP calipers refurbished. The rear coil springs have been renewed, along with the rear air suspension pump and pipes, and all of the lower arms. The sump pan has been replaced, and a new clutch has been fitted, as well as a new spigot bearing and modified bell housing to incorporate an uprated pivot pin. 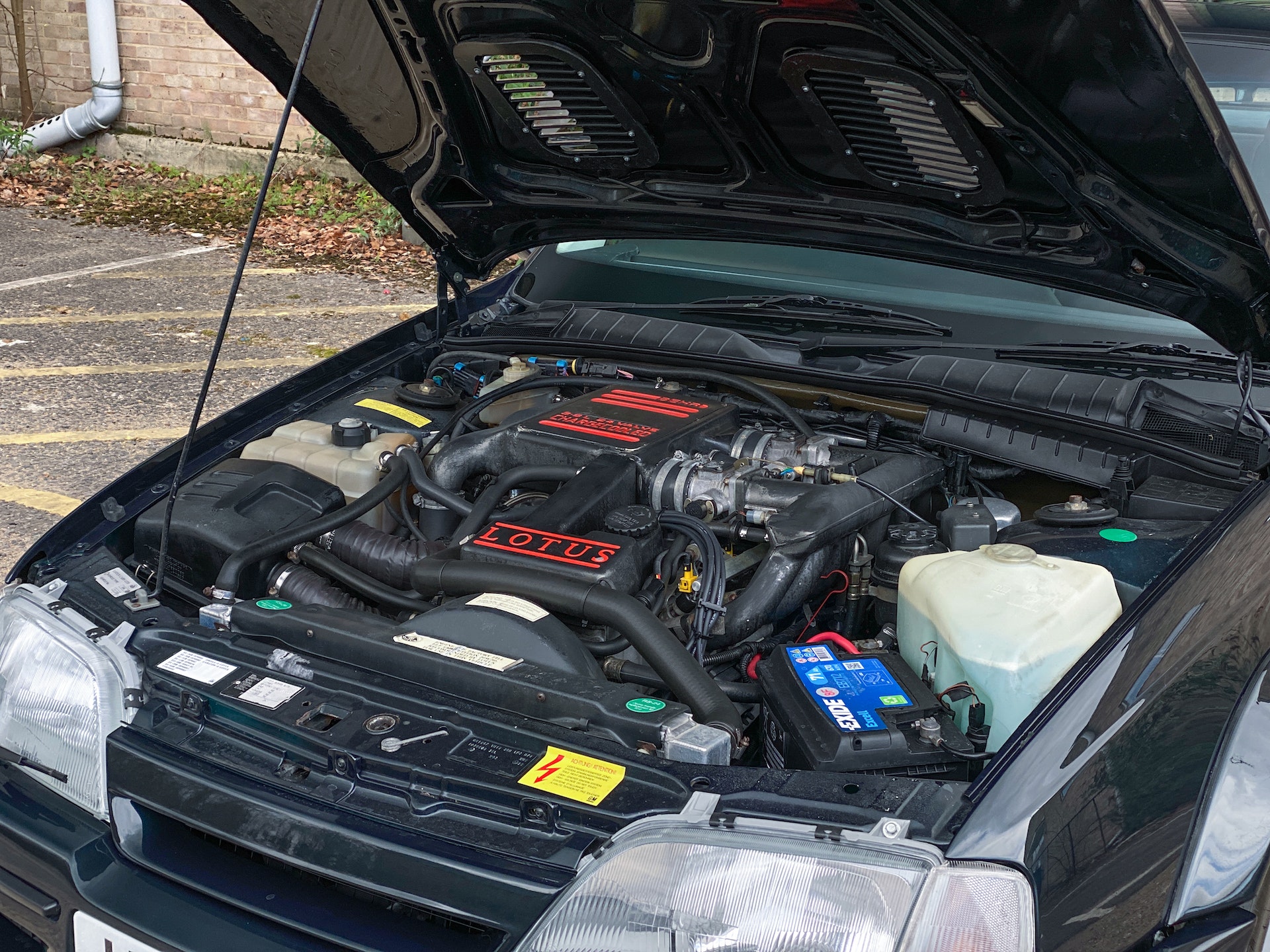 The last MOT test took place on 4 October 2017 at 95,755 miles, which resulted in a clean pass with no advisories. The seller has committed to put a fresh 12-month MOT certificate on the car before handover to the next owner. In the unlikely event that there are any advisories noted, the seller will rectify them. 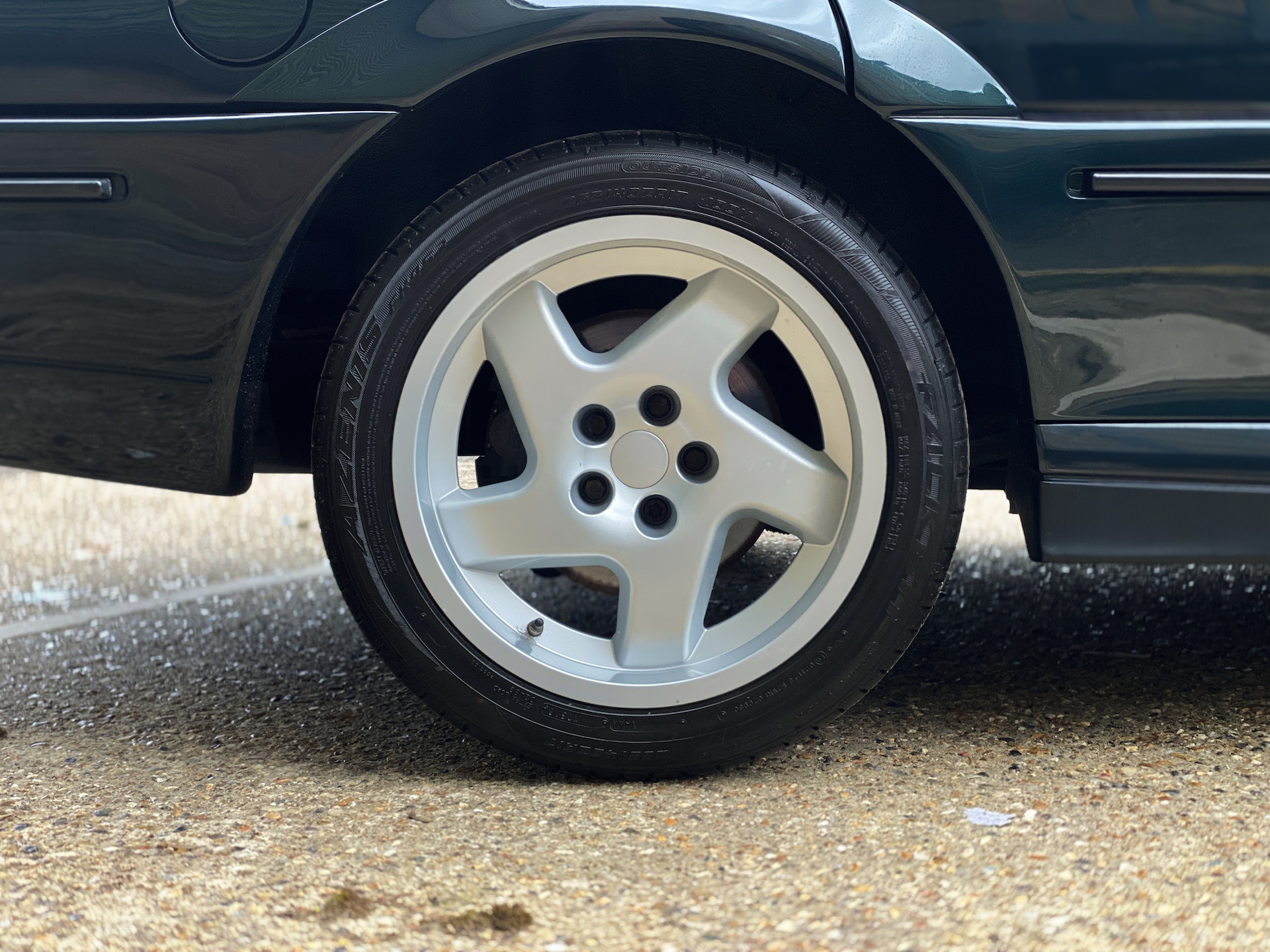 The alloys are shod in Falken tyres in size 235/45 ZR17 at the front and 265/40 ZR17 at the rear, which were fitted during the recent overhaul and are in as-new condition. Accompanying the car is a complete original book pack, as well as numerous brochures and period magazines featuring articles about the model. 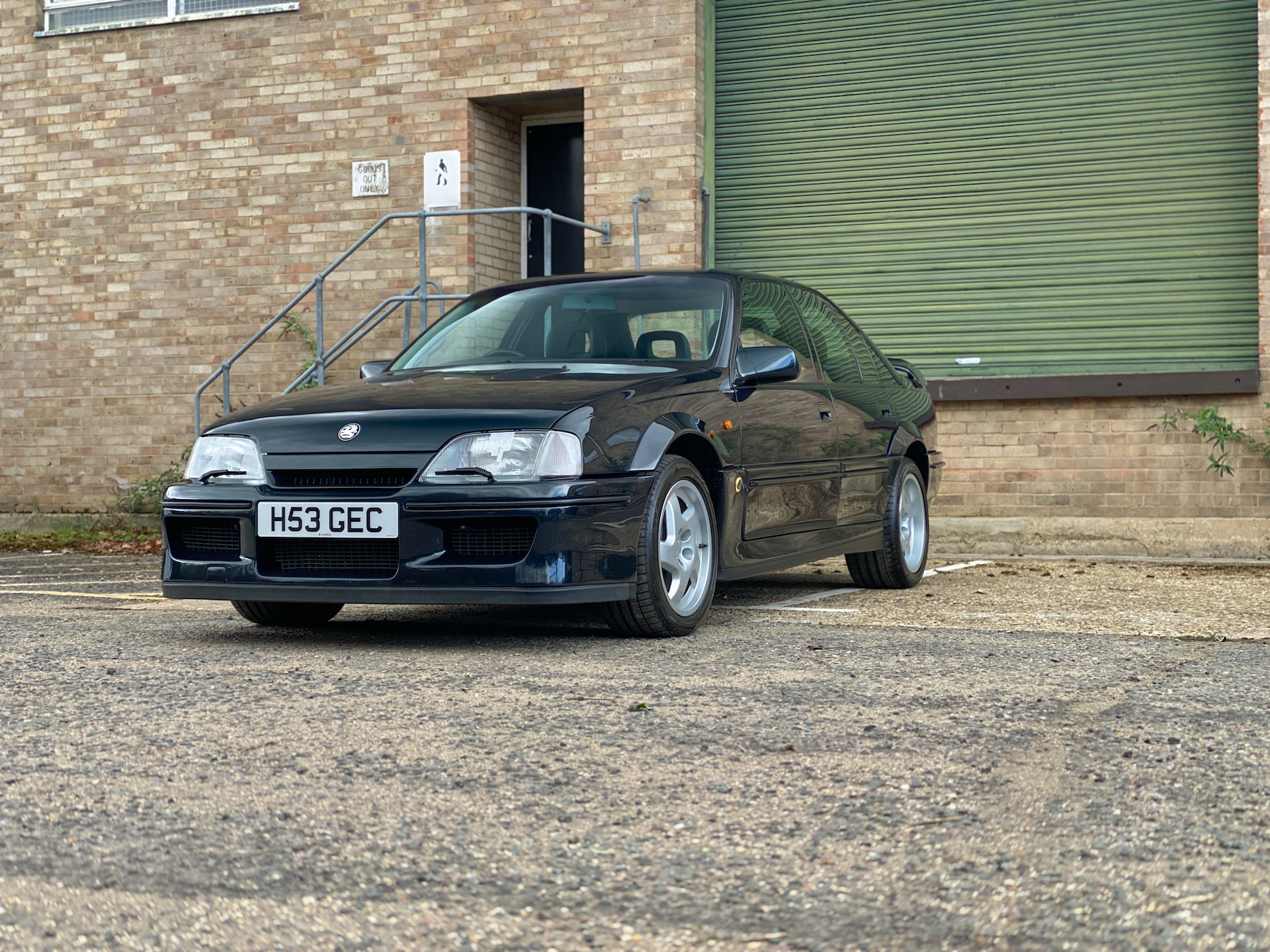 This Lotus Carlton is a superb example of the breed, benefitting from fresh paintwork and extensive mechanical refurbishment. It remains in original, unmodified condition, and would be a wonderful addition to any collection of modern classics. The Carlton will always be a ‘blue collar’ performance hero, and this particular car will undoubtedly delight its next owner.