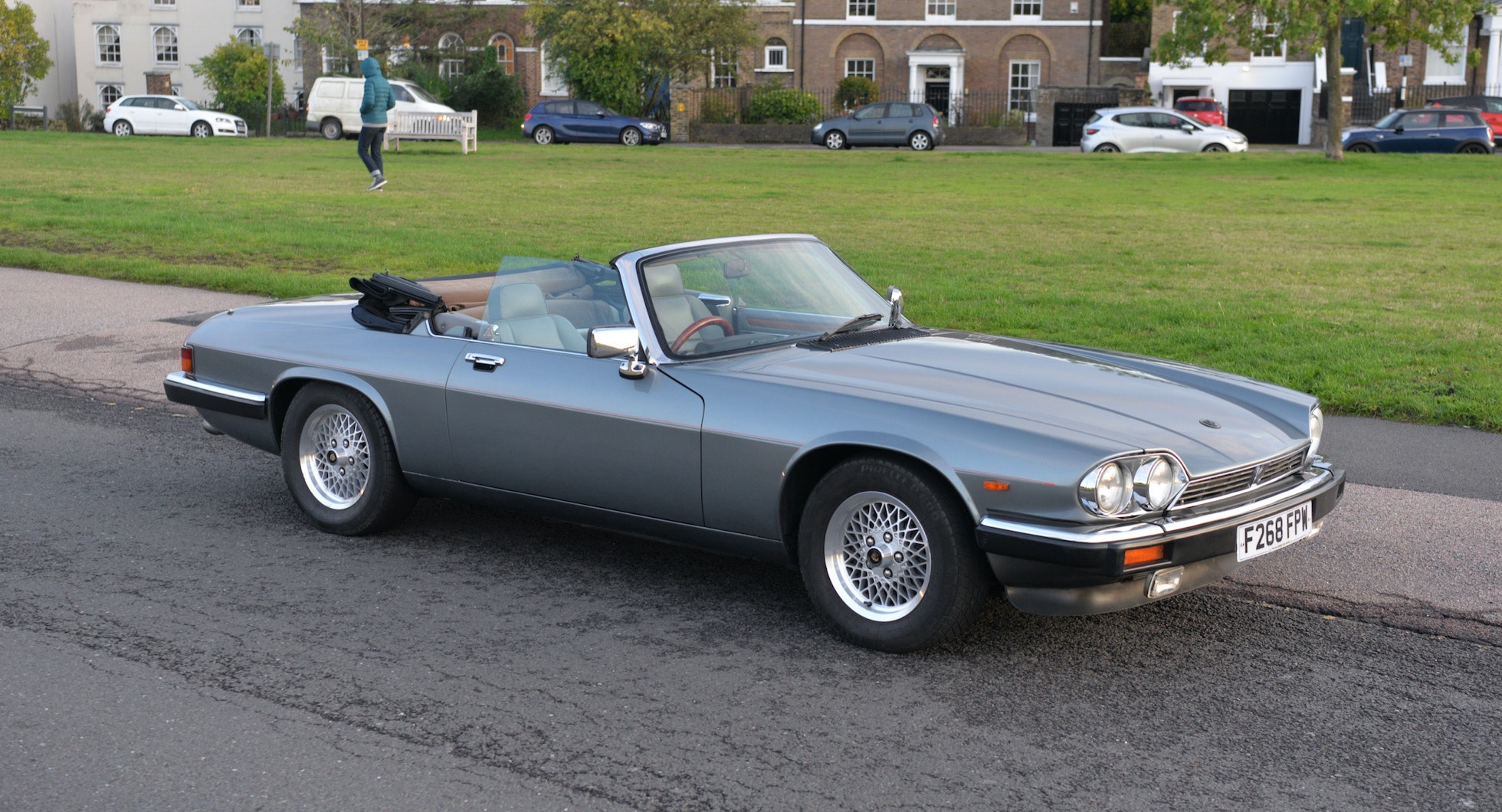 This 1989 Jaguar XJ-S V12 Convertible is a classy open-top British tourer in excellent condition, used only on sunny weekends in recent years and maintained superbly by its current owner. It is powered by the 5.3-litre HE V12 engine and driven through the GM400 three-speed automatic transmission. The odometer indicates 114,250 miles from new, which is supported by a detailed history file. 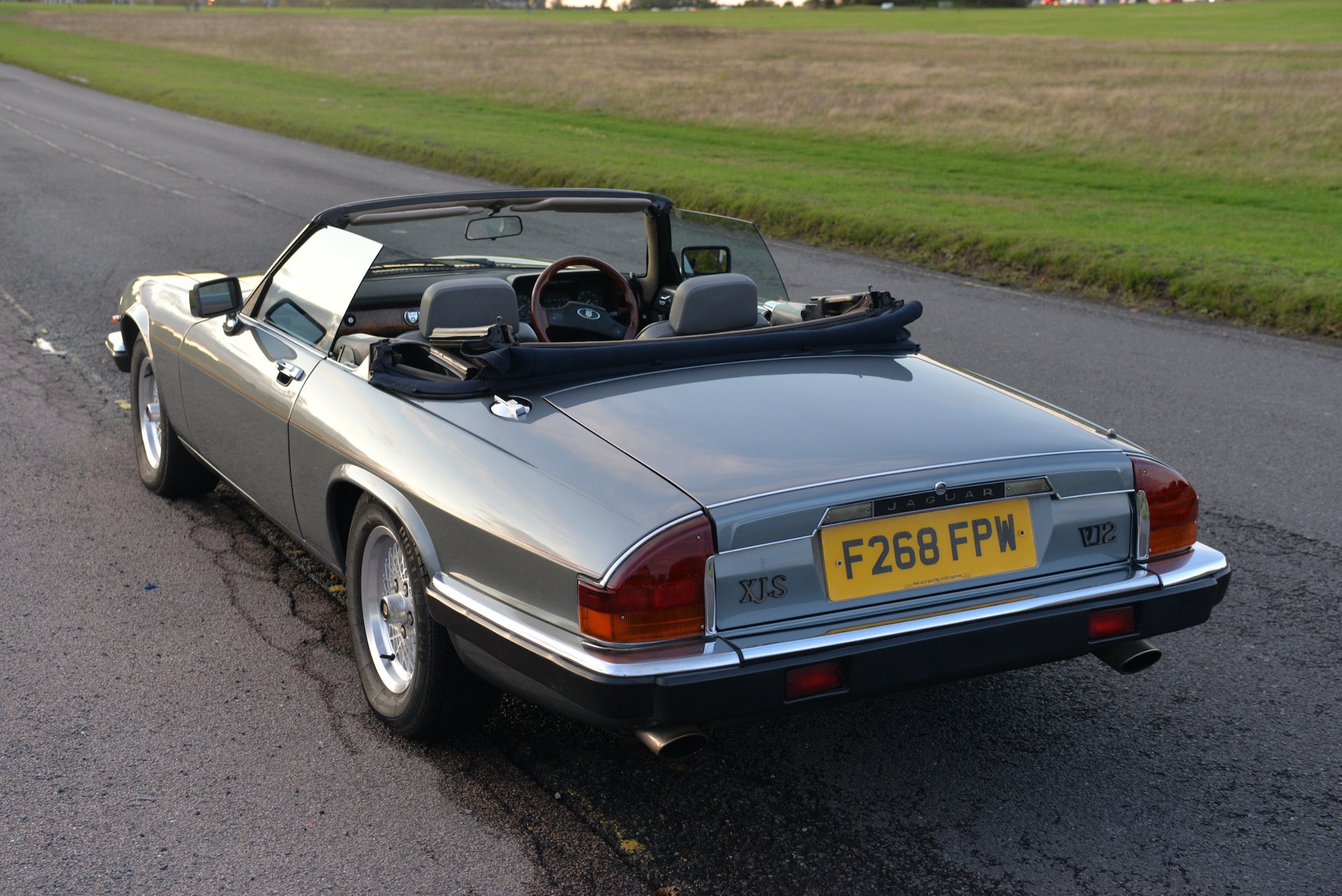 Delivered new in July 1989, this Jaguar was handed over to its first owner by main dealer Guy Salmon in Thames Ditton. It was acquired by the vendor in March 2011, who has enjoyed around 20,000 miles behind the wheel of this wonderful classic - using it as a daily commuter for four years, and more recently only as a weekend and holiday car. 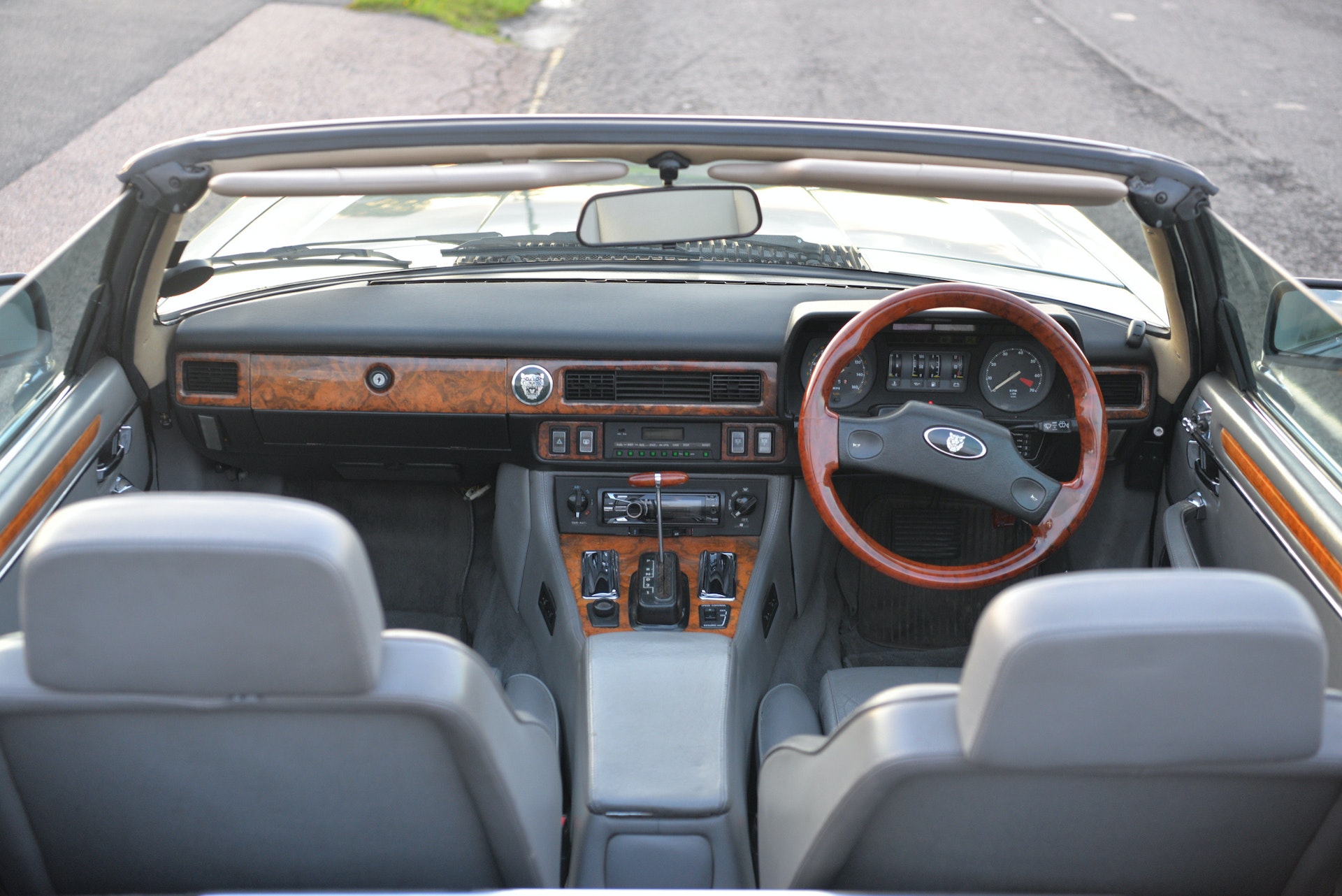 Its Tungsten Grey paintwork is in very good order, and is complemented by a smart red coachline down each flank. The vendor reports that there is no arch or body rust to be seen anywhere, and that he's always kept it out of the rain. There are some surface scuffs around the driver’s door lock, and one or two minor blemishes elsewhere. On the nearside rear bumper section, there is a small nick in the chrome and some corrosion on the surface beneath. The rest of the brightwork around the car is in excellent condition. 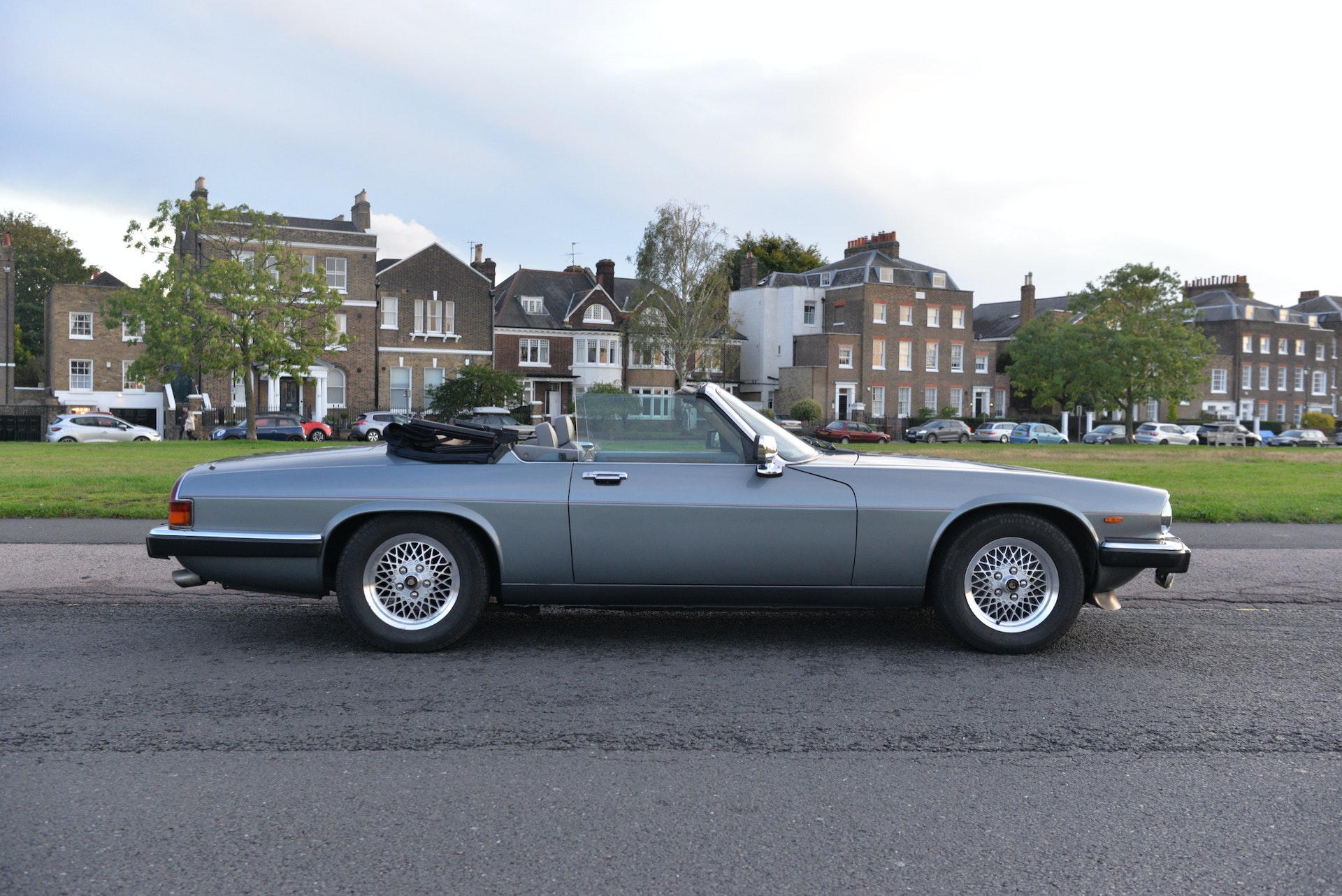 While it is believed that most of the paintwork is original, the wheel arches and the nearside door area did have some cosmetic work and paint around two years ago to bring the appearance up to a very good standard. A ‘leaper’ mascot and rear spoiler were fitted by a previous owner, so when the vendor first acquired the car these were removed and the fixing points repaired and painted as well. The final change he made was to swap the original headlights for the stylish US market units. 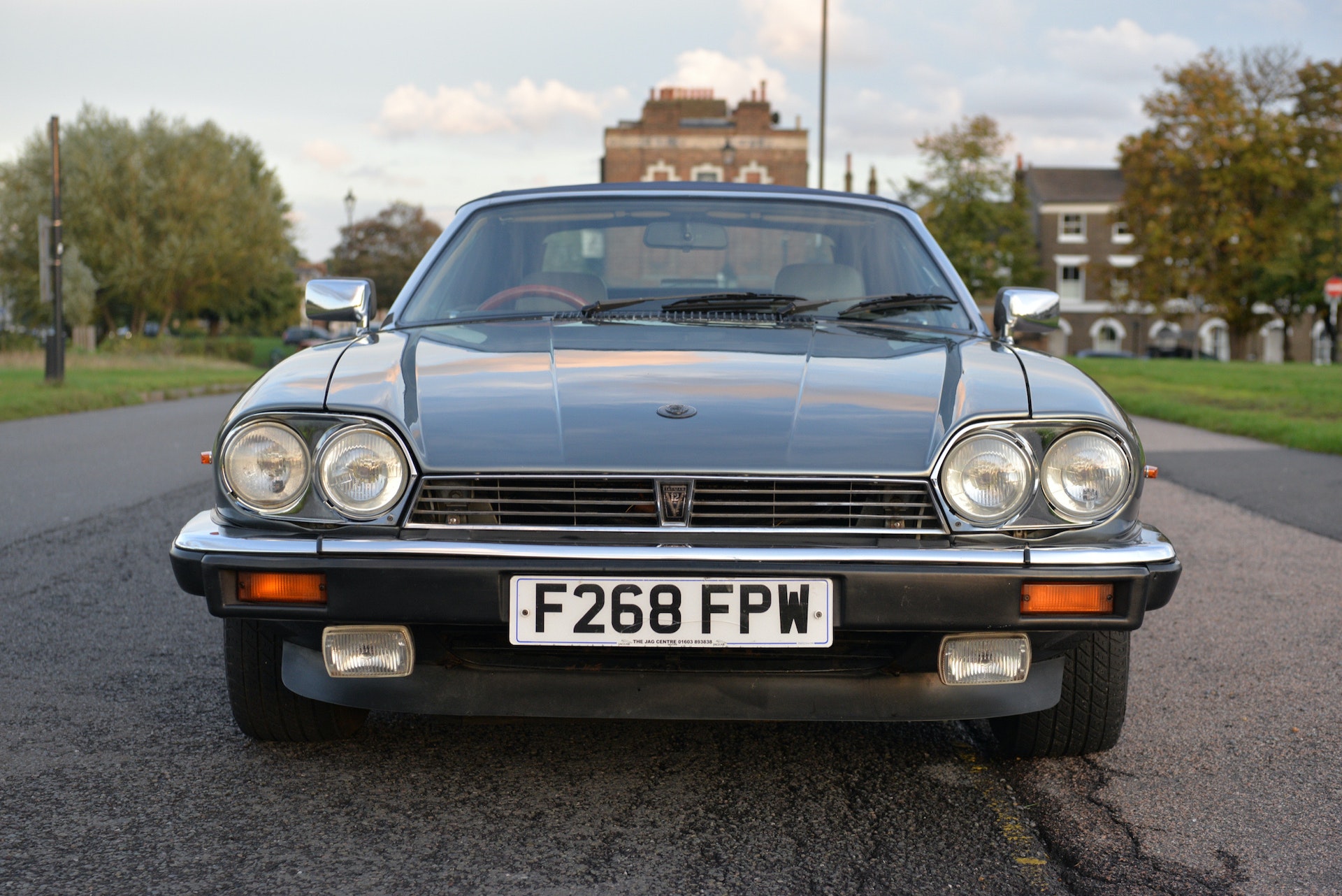 The car sits on the original and correct ‘Lattice’ alloy wheels, which have a few minor kerb marks and some lacquer peeling, but are in sound order. The wheel bolts all appear to be in excellent condition with no signs of corrosion. 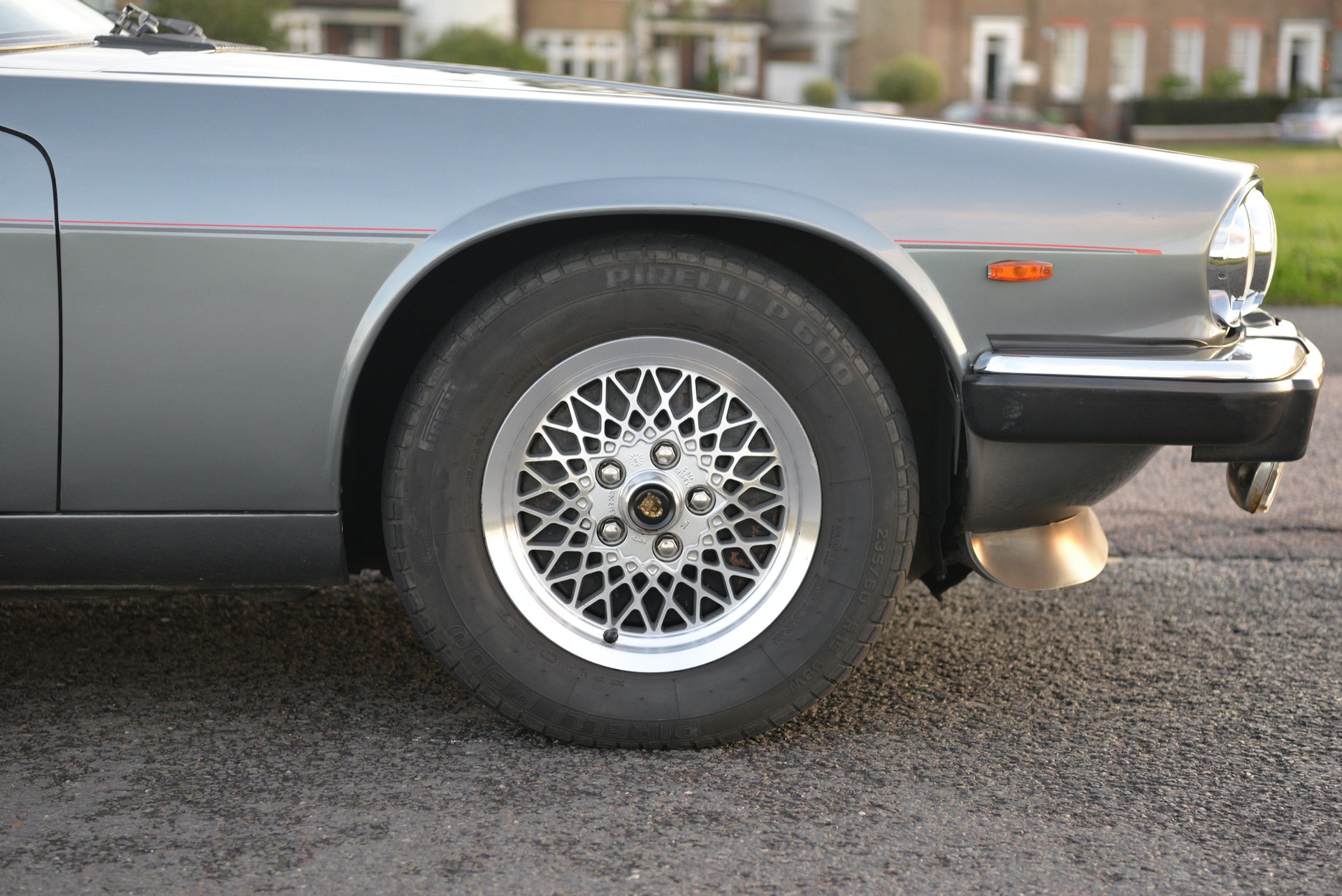 Inside, the original grey leather upholstery is in very respectable condition for its age and mileage. There is some visible wear on the driver’s seat bolster, a repair to the piping at the edge nearest the door, and a small cut in the passenger seat squab. Other than that, the leather is in great shape with a handsomely-aged appearance. 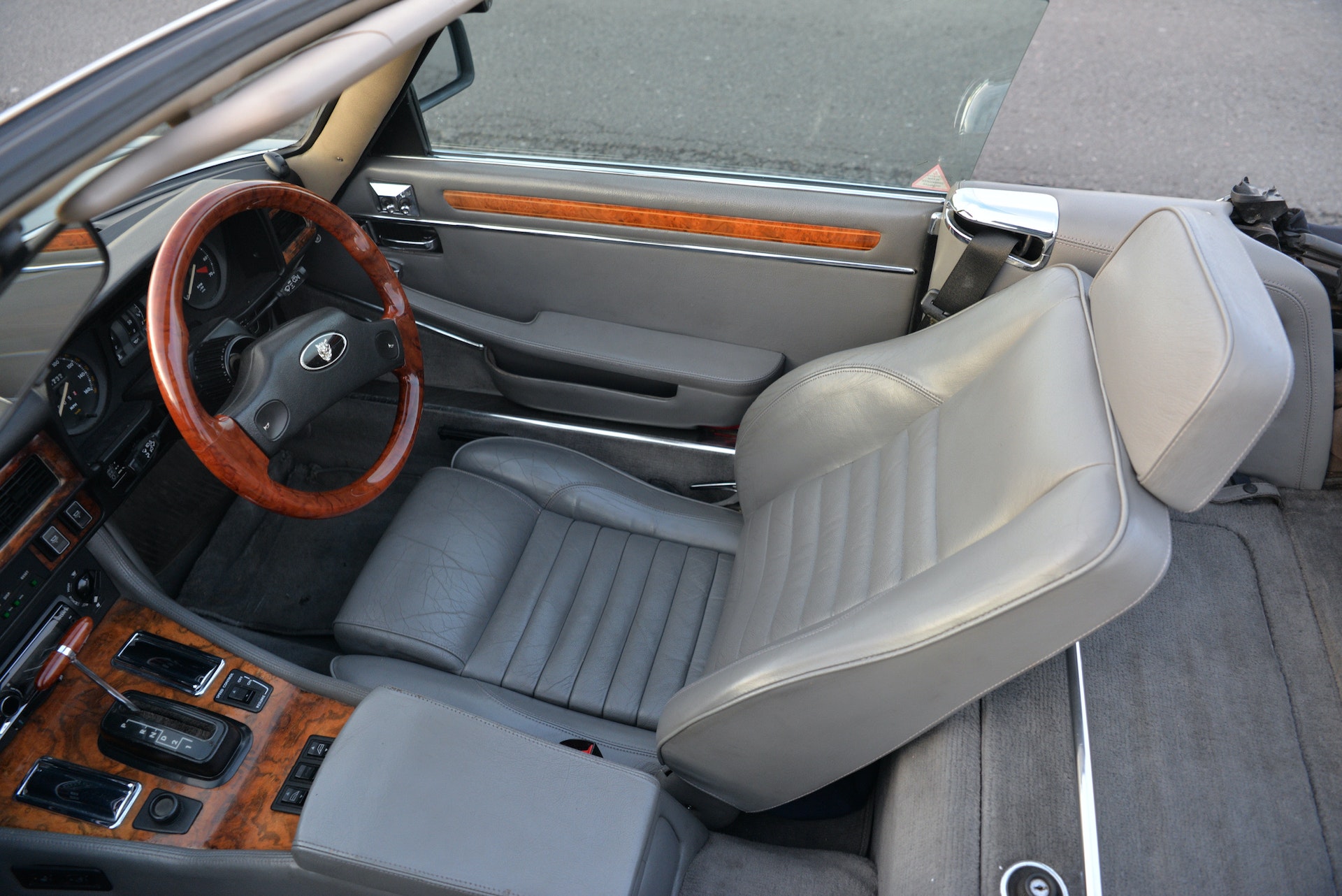 There are some minor marks on the wood veneer panelling on the dashboard, but overall the cabin looks very smart. In the centre console, there is a contemporary Sony head unit with Bluetooth connectivity and a line-in input. 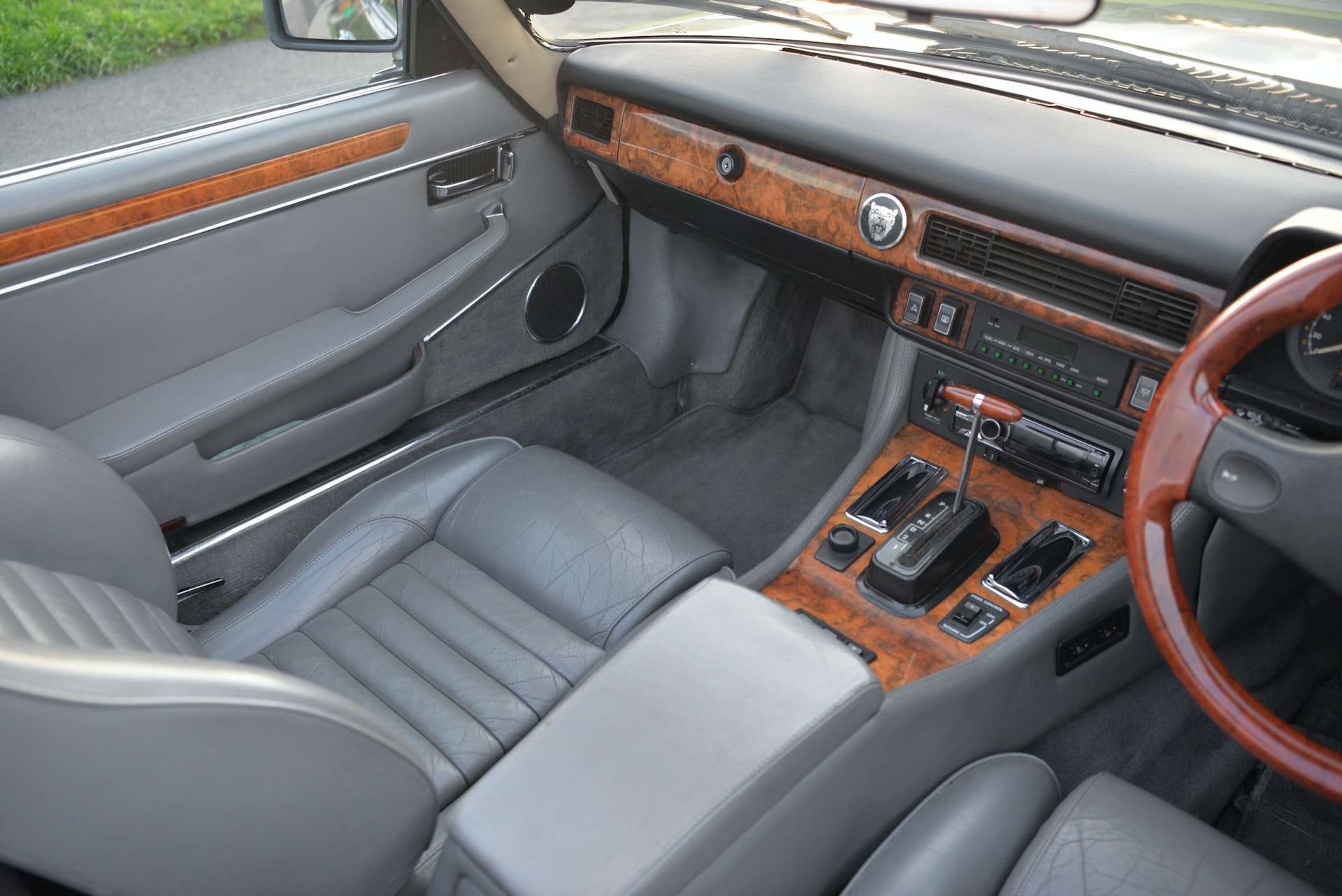 There are no major electrical gremlins, but the vendor notes that the passenger side window motor is intermittently weak, so sometimes needs help to go up. The digital mpg and trip computer on the dash does not work, and the central locking can be temperamental depending on the passenger side switch position. 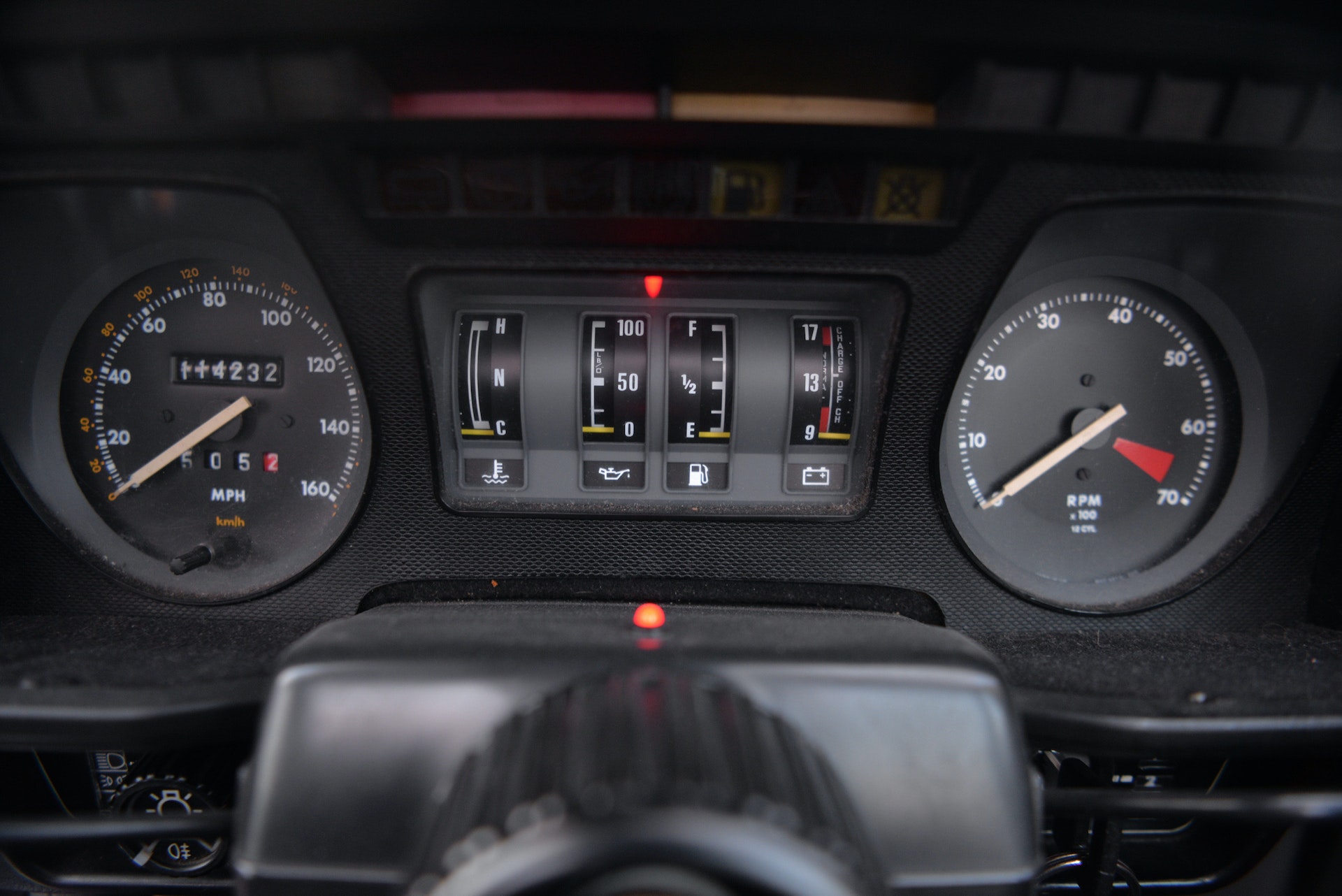 Its power-operated roof operates smoothly when being raised or lowered. The rear window is free of clouding, and even retains the original Guy Salmon dealer sticker. There are a few tiny holes in the outer fabric of the hood, and two small patch repairs near the bottom left corner of the rear screen. 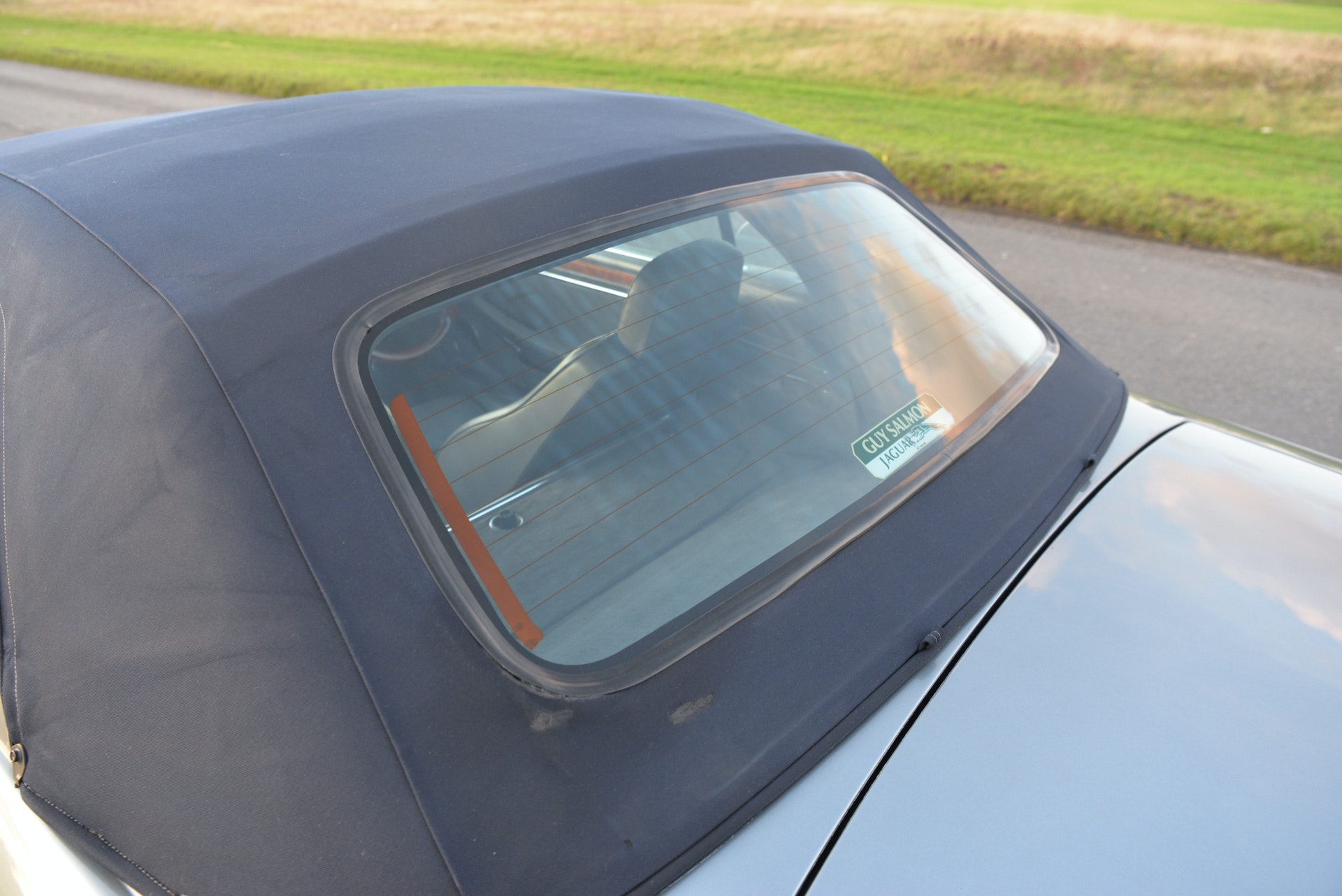 The car appears to have been well-maintained throughout its life, and there is a large history file that details the considerable investment made to bring it up to daily driver reliability. From 2011 to 2013, it was looked after by Jaguar specialist David Marks Garages in Nottingham, and from then until the present day by The Jag Workshop in London. 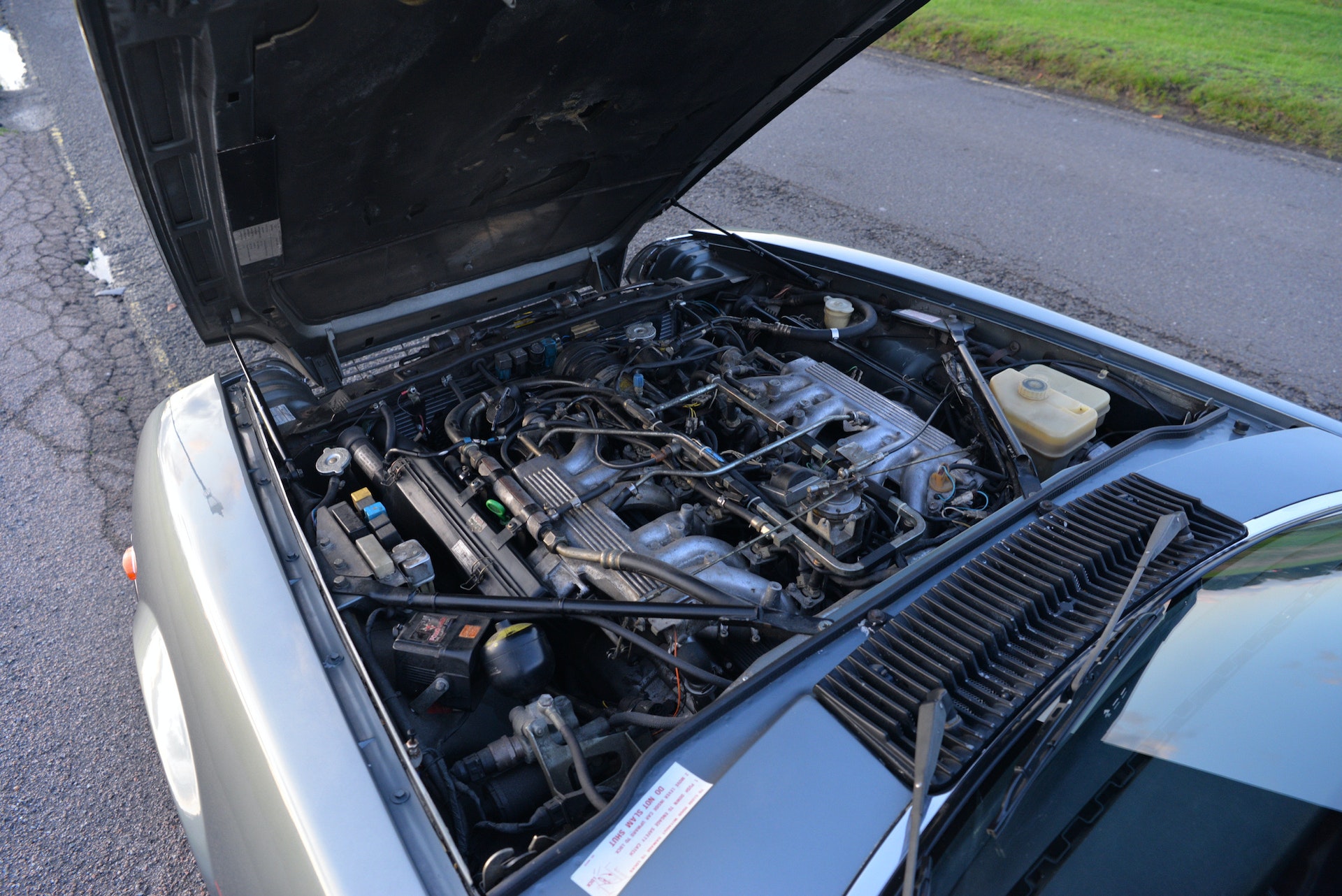 Its last service was in February 2018, which included fresh engine oil and coolant, renewal of both thermostats, new front and rear shock absorbers and rear coil springs, as well as replacement cam cover gaskets and spark plugs. In June 2018, the radiator was also renewed with an upgraded big-core aluminium unit. Within the last 18 months it has also had the bonnet struts and battery replaced. The old radiator fans have been swapped out for new electric items. 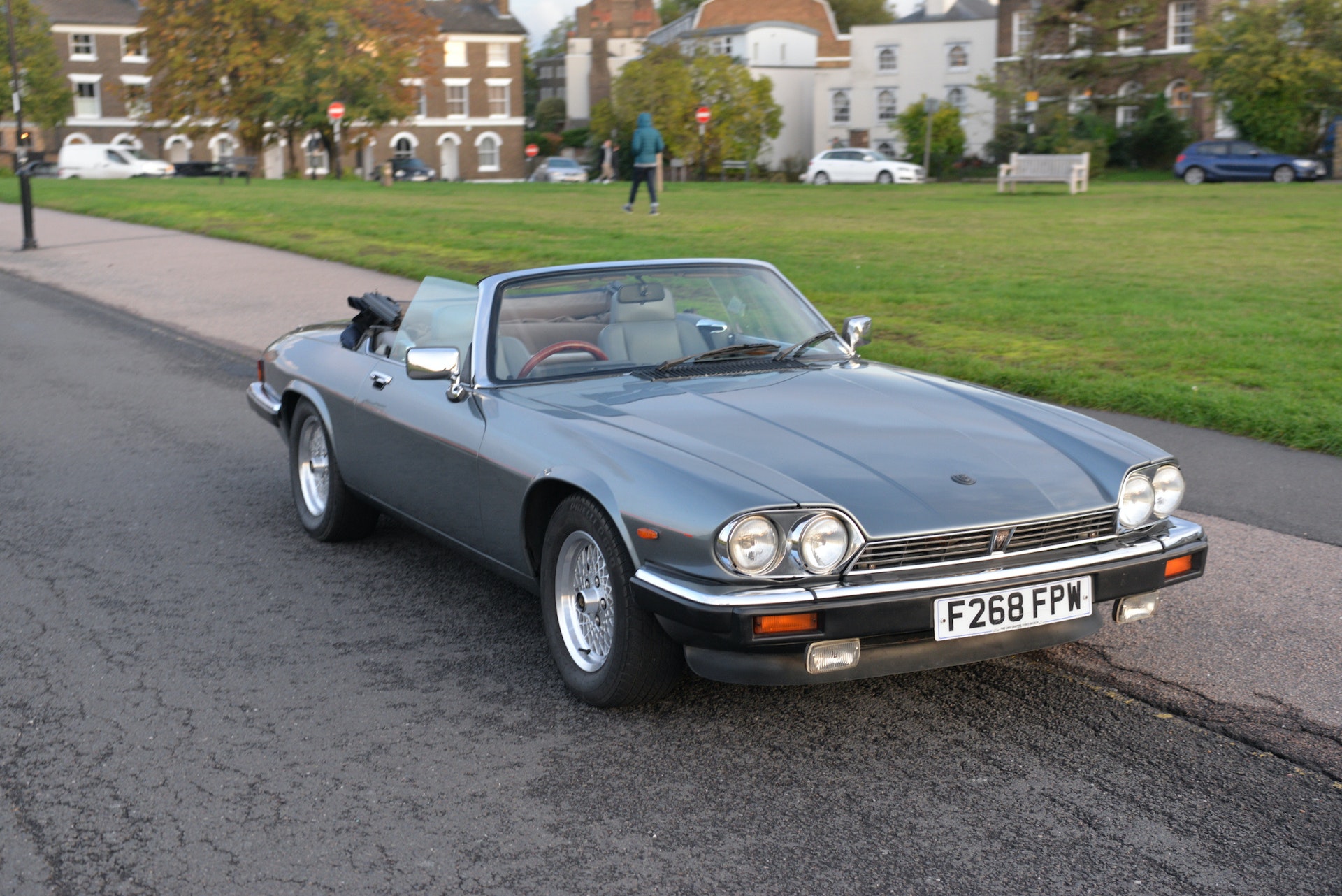 Prior to that, the car had received a new steering column, a replacement distributor cabling loom, distributor cap and rotor arm, new ignition module, ignition coils, spark plugs and leads, and even a new radio antenna. The rear brake pads were last replaced at 104,100 miles, while the front pads were renewed at 110,803 miles. 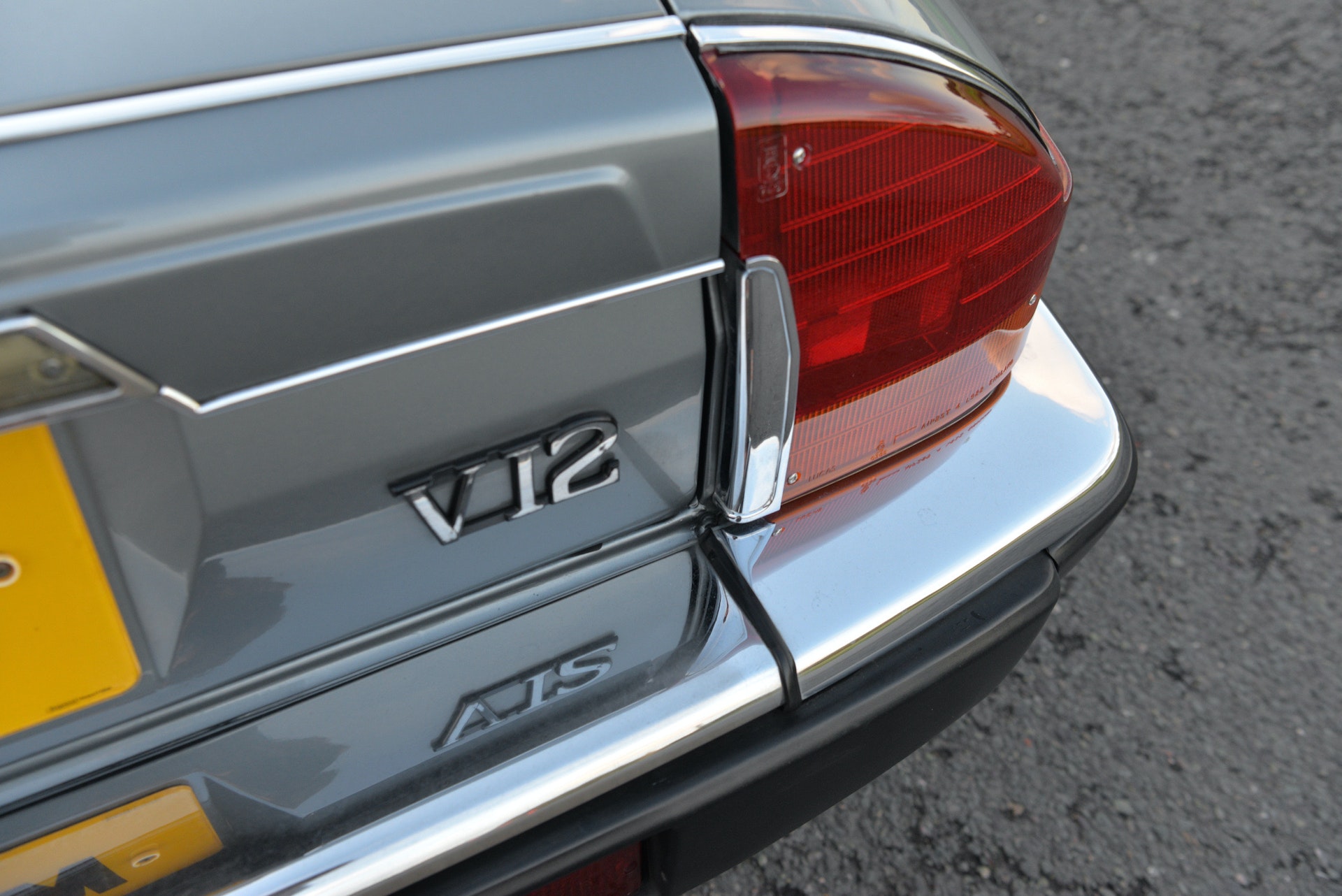 Earlier in the vendor’s ownership, he commissioned the replacement of all of the high-pressure hoses, the water pump, and the driver's side window motor. All of the drive belts were renewed at 95,146 miles. The drivetrain features an upgraded transmission chip that enhances the sporting performance. It enables an easier kick-down function, holds the gears for longer, and makes the gear change process itself slightly faster. 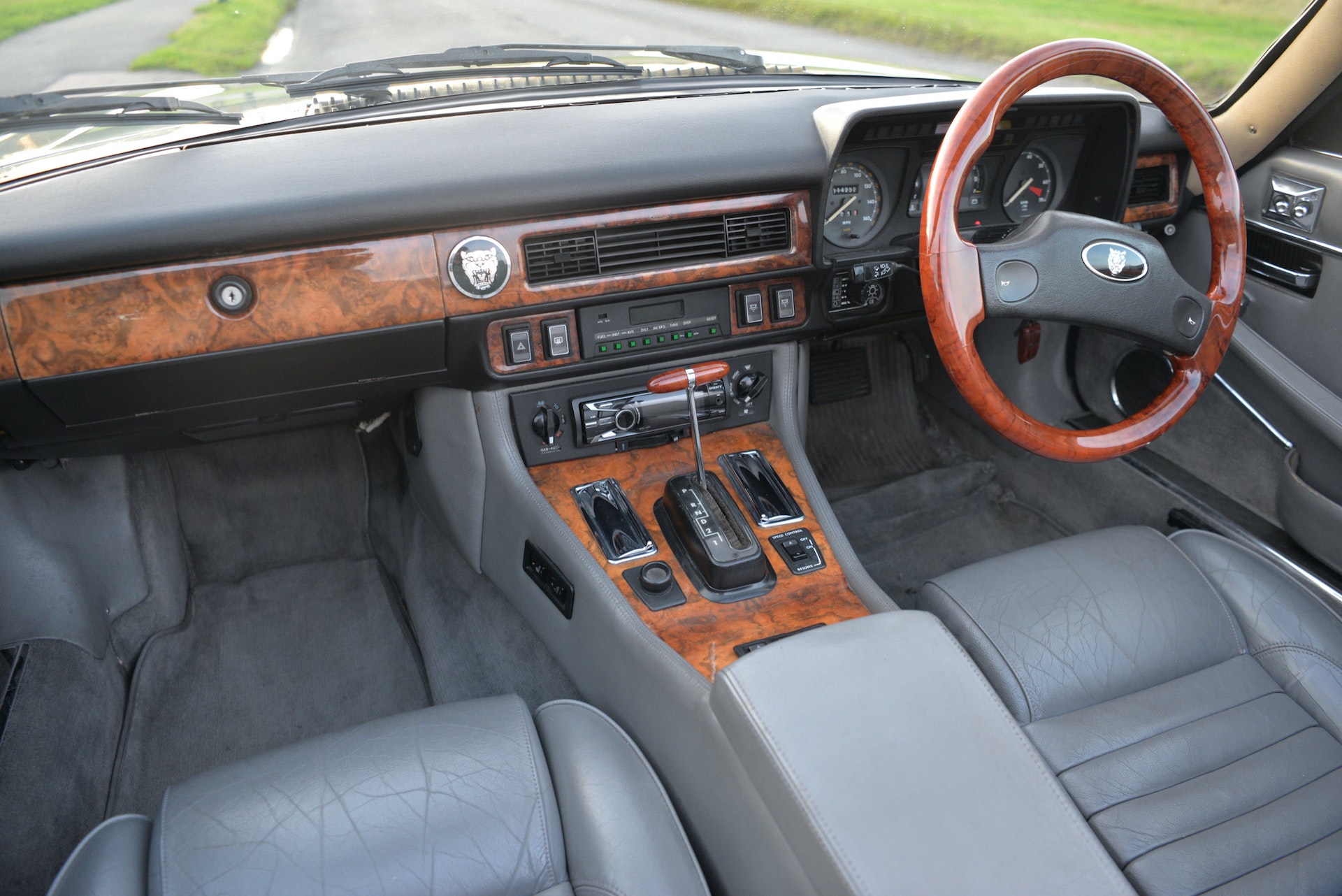 The only mechanical issue noted by the vendor is that the rear differential has a slow leak, but it simply needs topping up every 18 months or so. He also informs us that the air-conditioning is not functioning and the compressor-to-relay link is disconnected. 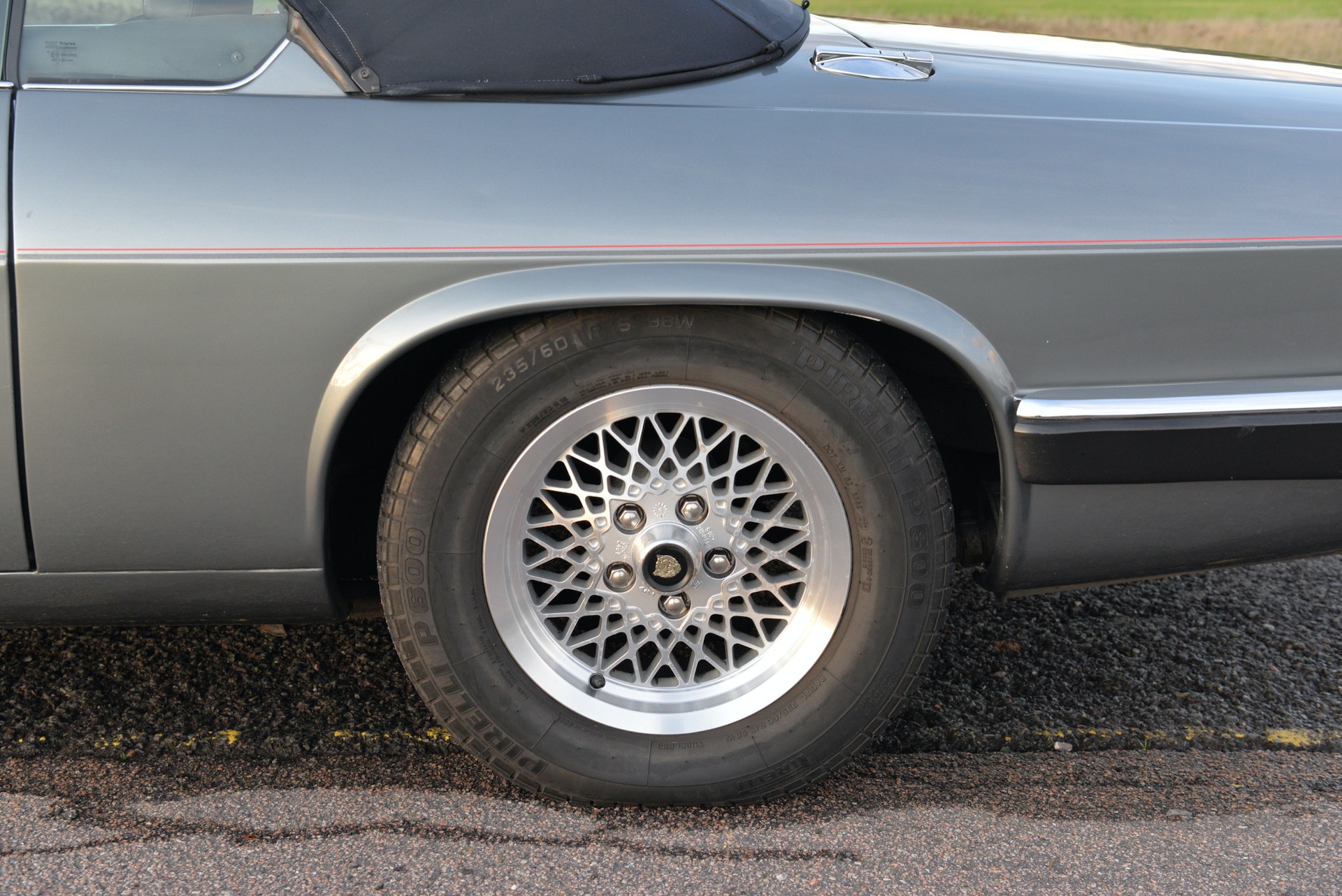 Its last MOT was on 25 February 2019 at 114,155 miles, which resulted in a clean pass with no advisories. The wheels are shod in a matching set of Pirelli P600 tyres in size 235/60 R15 all round. They were replaced eight years ago, but all have a good level of tread remaining. 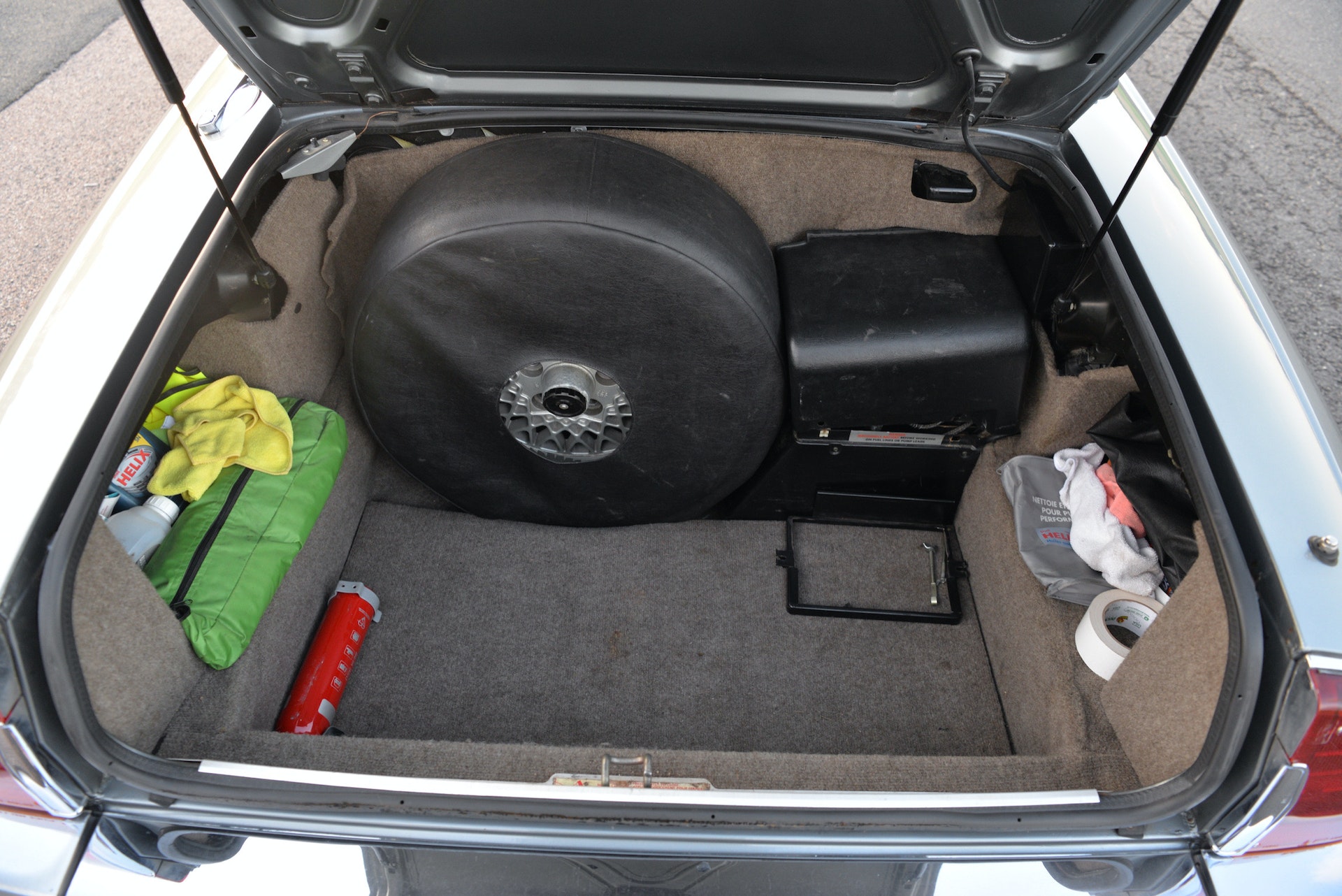 Accompanying the car is the original book pack in the dark green leather pouch, including the stamped service record. There is a raft of invoices in the history file, including receipts from the last eight years that show more than £12,000 spent during the vendor’s ownership. 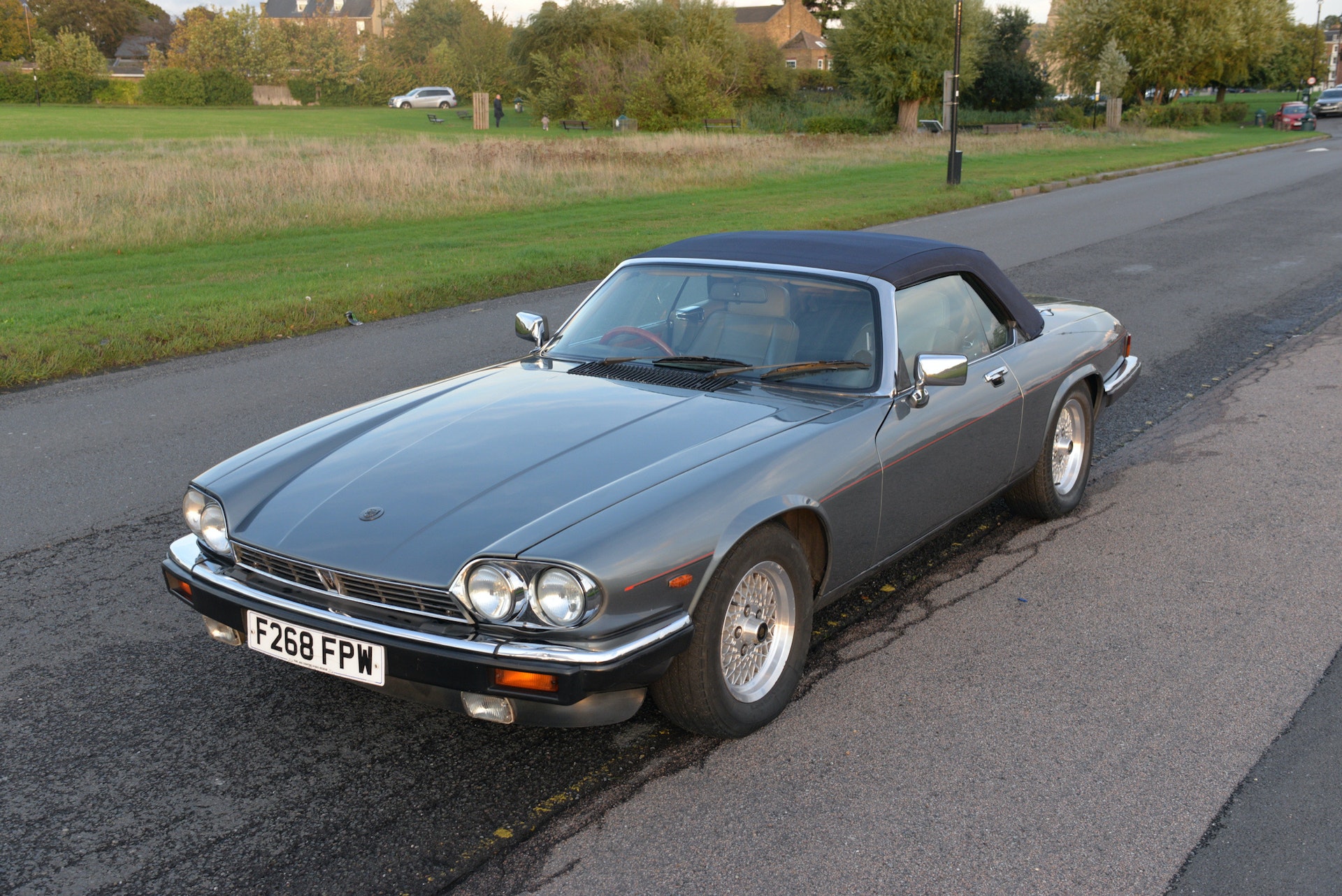 This Jaguar XJ-S V12 Convertible is a beautiful drop-top classic that has proved to be a reliable and thoroughly delightful car during the vendor’s eight years of ownership. In his own words: “It's very sorted and is a perfect Sunday car, ready to go. Sublime on a B-road at 50mph on a sunny day with the top down”. The car needs nothing to be taken out and enjoyed immediately, and is ready to be put to use as a regularly-driven commuter classic, or just kept to savour on warm weekends.