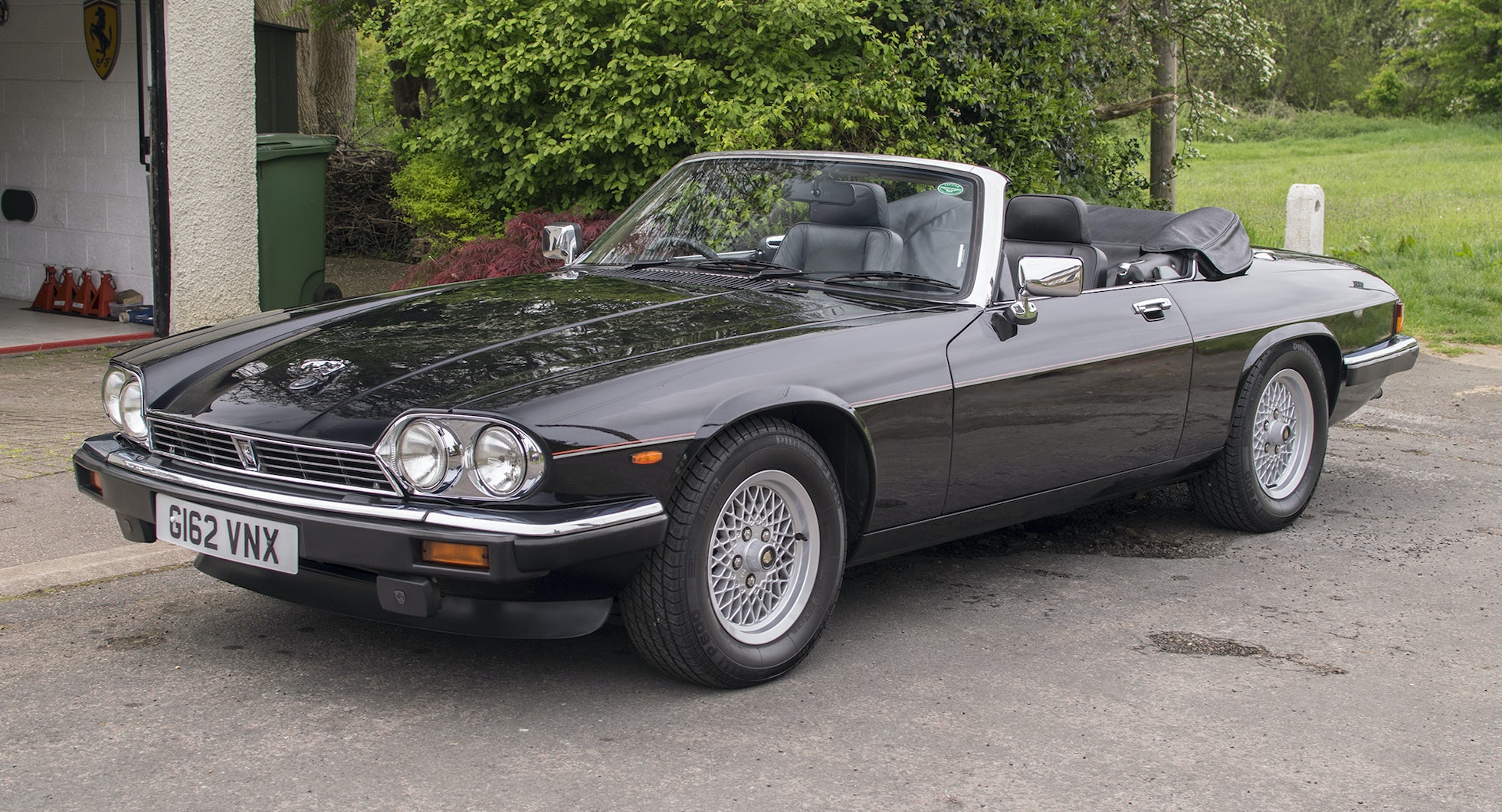 This 1989 Jaguar XJ-S V12 Convertible is an elegant and practical classic, used daily and maintained superbly over the last four years. Equipped with the 5.3-litre HE engine and GM400 three-speed automatic transmission, this Jaguar shows 76,481 miles from new and comes with a detailed history file showing all known servicing and MOT dates. Presented in a discreet but handsome colour scheme, this XJ-S V12 is equally suited to continue as a daily driver for its next owner, or to be brought out just for sunny weekends and special occasions. 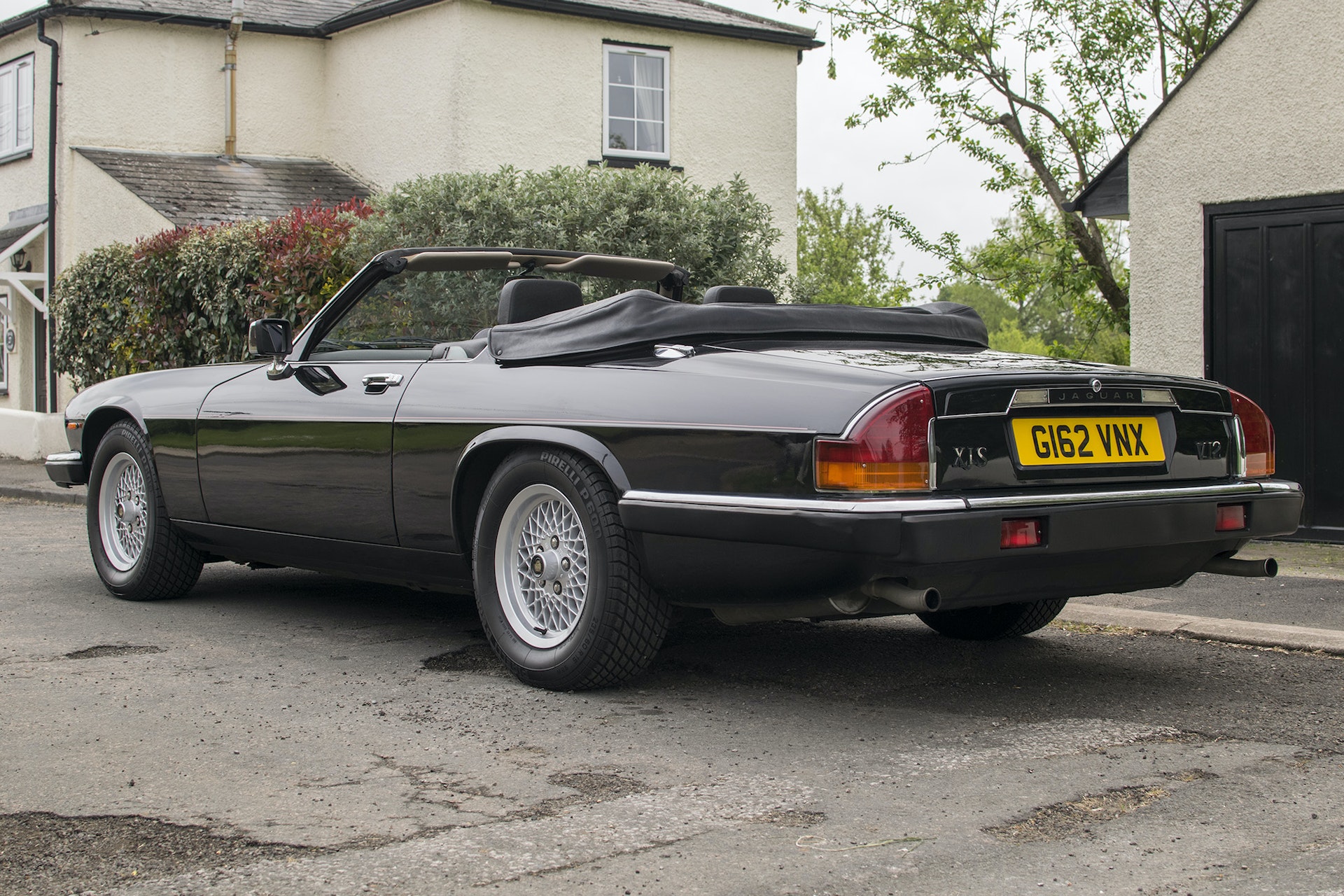 An original UK right-hand drive car, the Jaguar was first registered and delivered at the end of August 1989 via London dealer Armitage Walker Ltd. Its mileage from new is fully accounted-for in the history. By the time it was 10 years old, the car had covered just over 36,000 miles. Another decade later and the figure stood at around 56,000 miles. The vendor acquired the car four years ago from the sixth registered keeper, and he has since ensured that any required maintenance has always been carried out, so that it remains in superb condition. 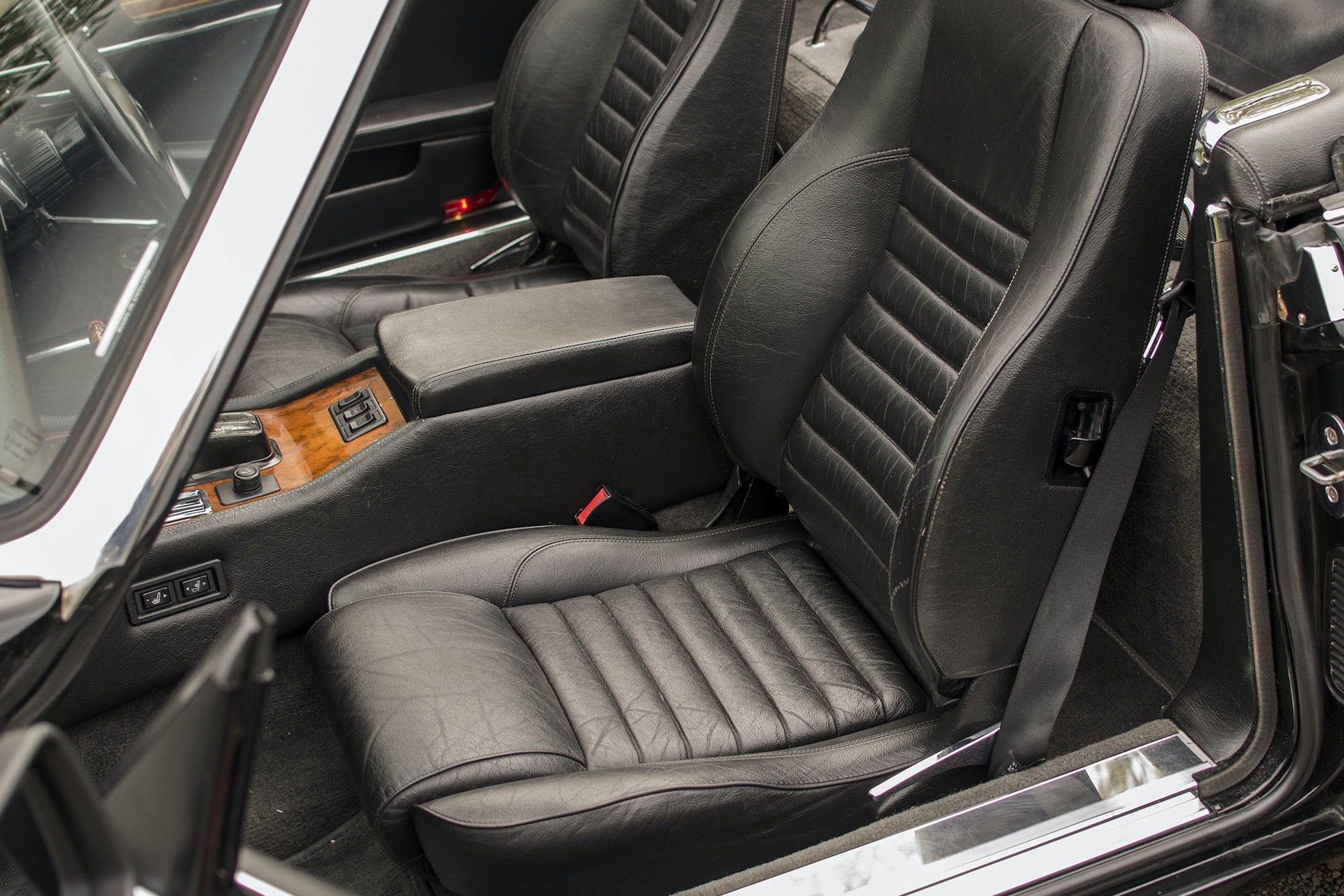 The car’s gleaming black paintwork is in very good condition. Overall, it has a deep and glossy finish that looks superb. The bonnet has previously had some fresh paint, but due to an error in application or in the polishing stages there is a slightly uneven finish across a section near the leading edge on the passenger side, which is shown in the photos. There are also some blemishes on the driver side of the bonnet, which may be from touching in stone chips, and to the chrome finish on the passenger side headlight. 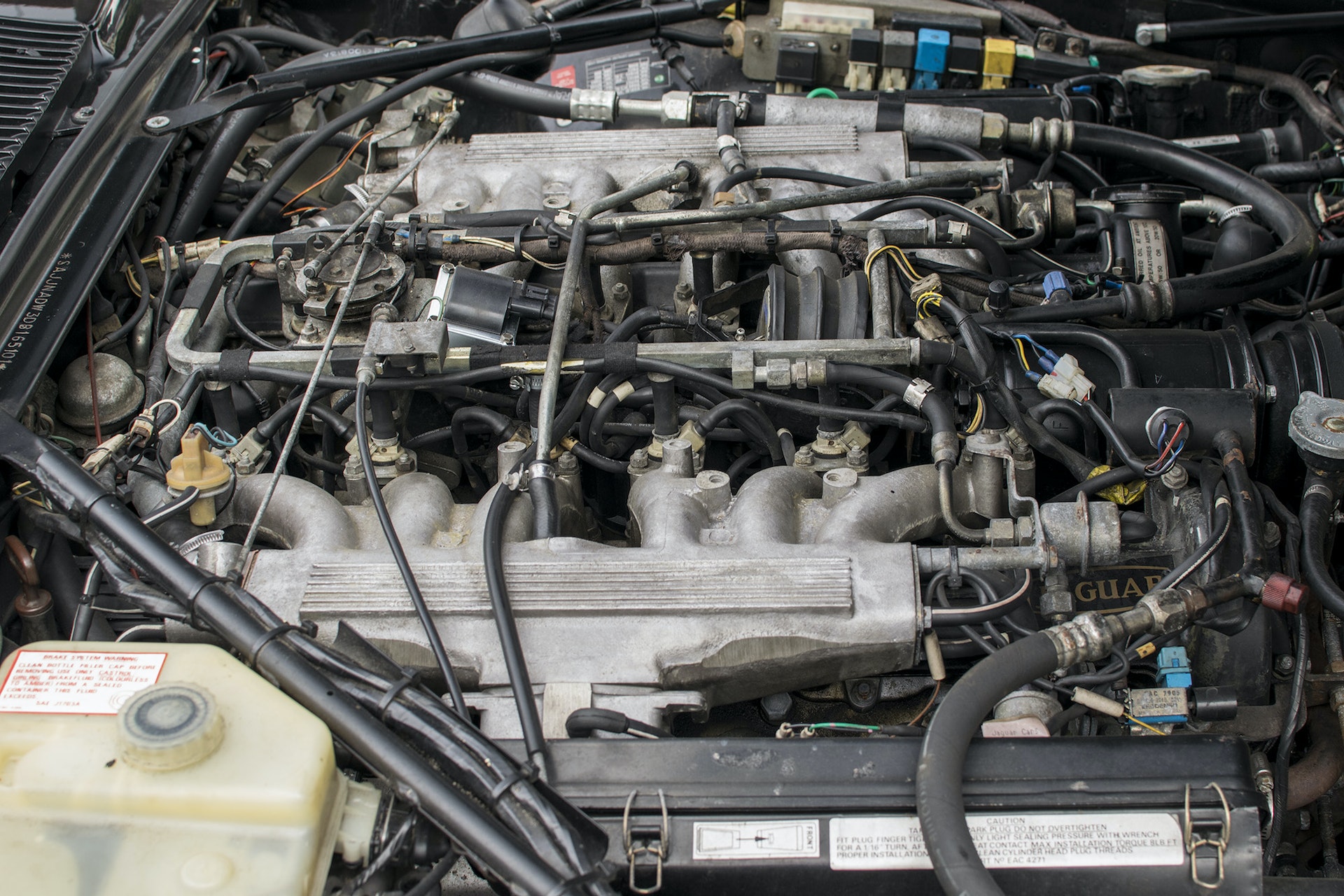 A few other minor chips and imperfections in the paintwork are also present, and are shown in the photo gallery. Jaguar enthusiasts may note that the headlights are not original UK specification. During the car’s earlier ownership, these items were swapped for the stylish US market units - and they have remained on the car ever since. Photos of the underside show a car that is still in solid condition. The 16-inch ‘Lattice’ alloy wheels are pristine, as are the wheel bolts. 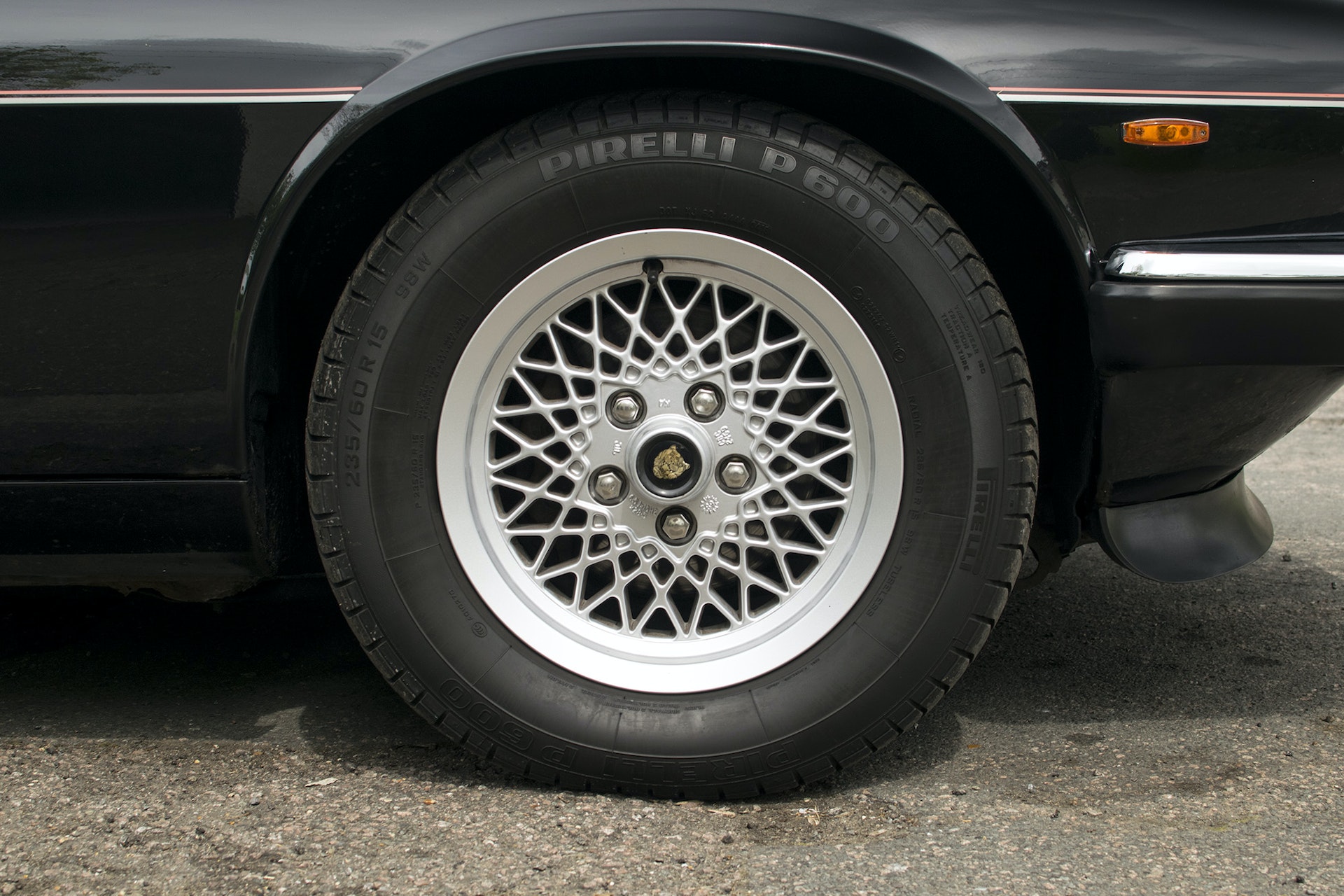 This car’s cabin is smartly presented with minimal wear to the high-quality black leather. The upholstery is generally in excellent condition, with only slight wear present on both driver and passenger seats - all of which is well documented in the photo gallery. It is equipped with a period Kenwood radio cassette player, as well as a Kenwood power amplifier in the boot and two additional Alpine speakers behind the seats. 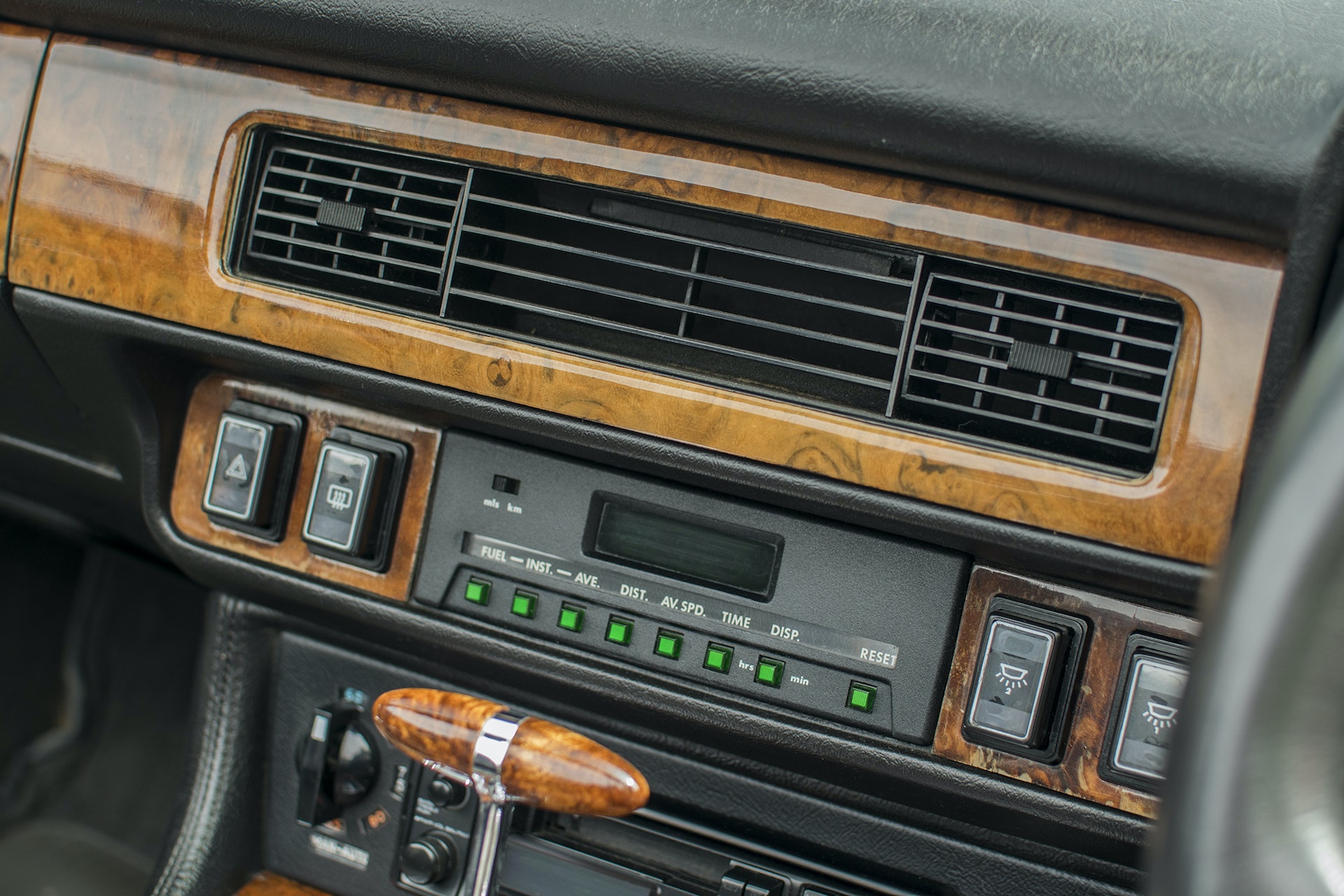 The power-operated roof is watertight and operates smoothly when being raised or lowered. There is a small section on the driver side behind the window where the fabric has worn. Around the rear window, the temporary tape fix requires a permanent repair by regluing. 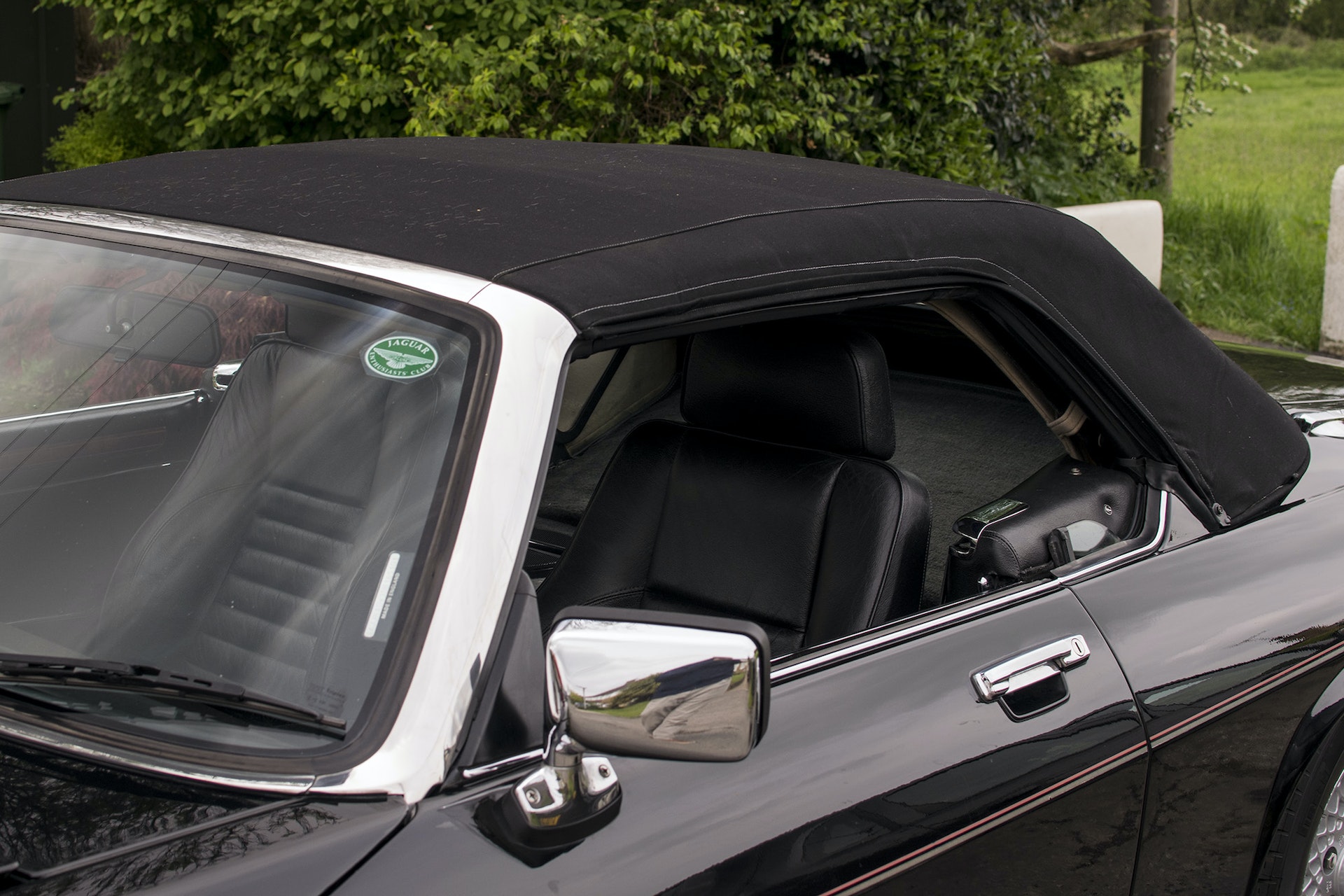 Accompanying the car is a very good record of service history from new. The vendor acquired the car in 2015 when it had around 57,000 miles on the odometer. Beyond regular maintenance since then, it received a new distributor cap, ignition leads and spark plugs in July 2015; a replacement air-conditioning condenser and dryer in September 2015; and renewed rear shock absorbers, front wheel bearings, steering rack mounts, and front brake discs and pads in April 2017. 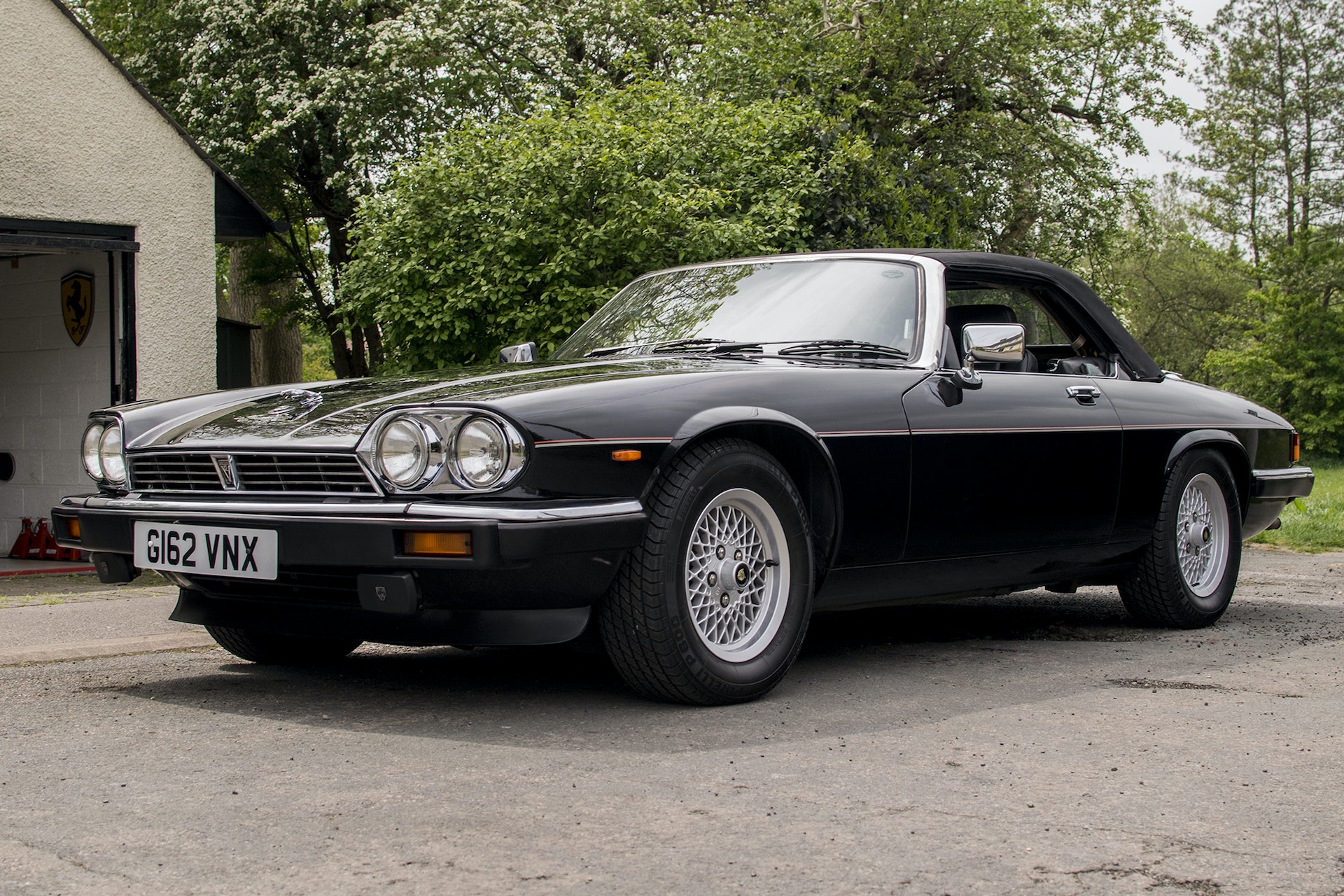 It was last fully serviced in November 2017, which included oil and filter renewal, as well as any other maintenance needed. Work carried out by LE Cramer in Watford included repairs to the offside front window regulator, replacement of the water pump; renewal of all ancillary drive belts, a new air-conditioning compressor and servicing of the air-con system. 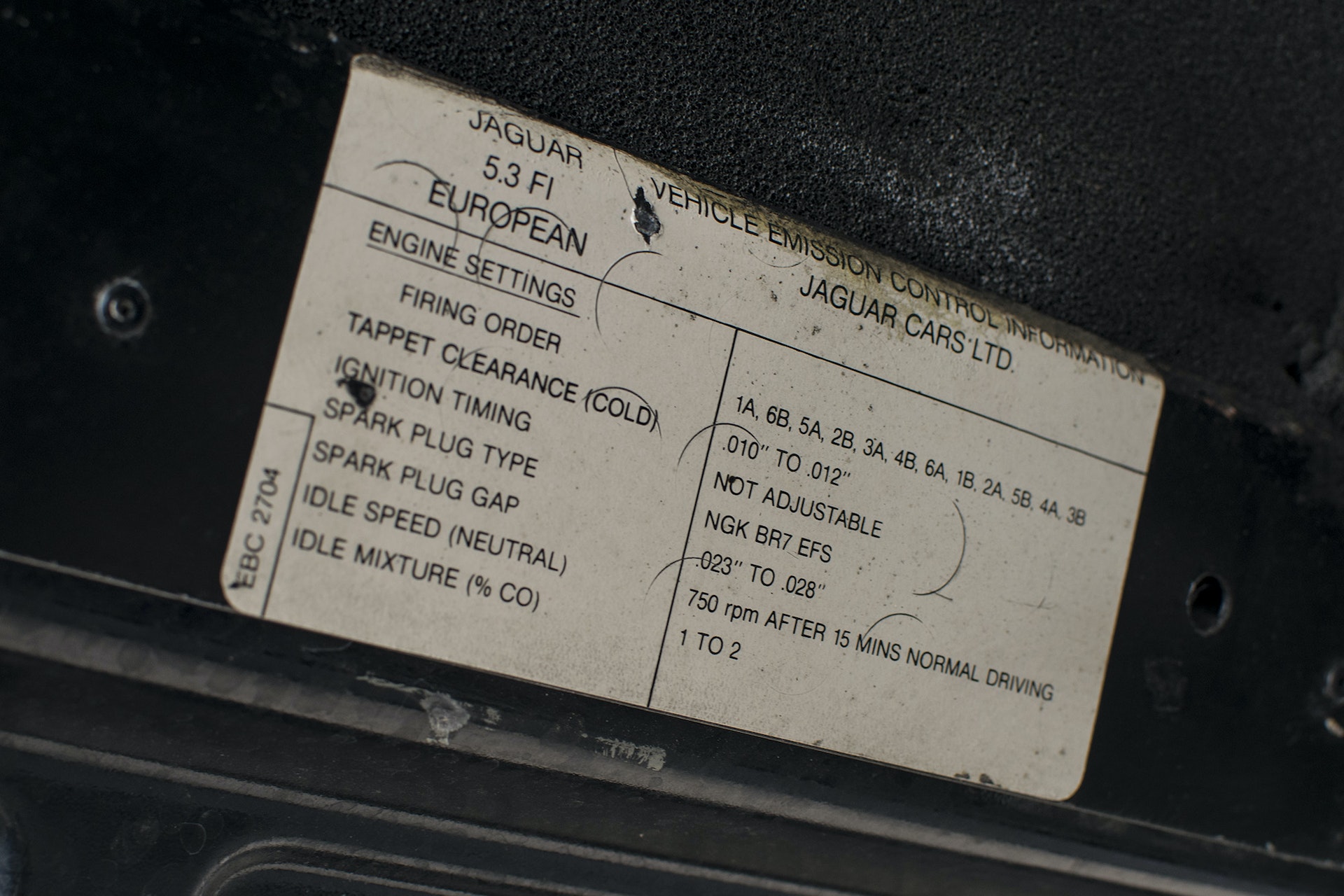 The vendor reports that the exhaust currently requires repositioning due to a slight knock, the power steering rack is weeping (for which he has a quote of £260 plus fitting costs), and the heater fan is currently only working properly when set on 'medium' speed. The car is also due a full service. All four wheels are shod in a new set of Pirelli P600 tyres in 235/60 R15 size. 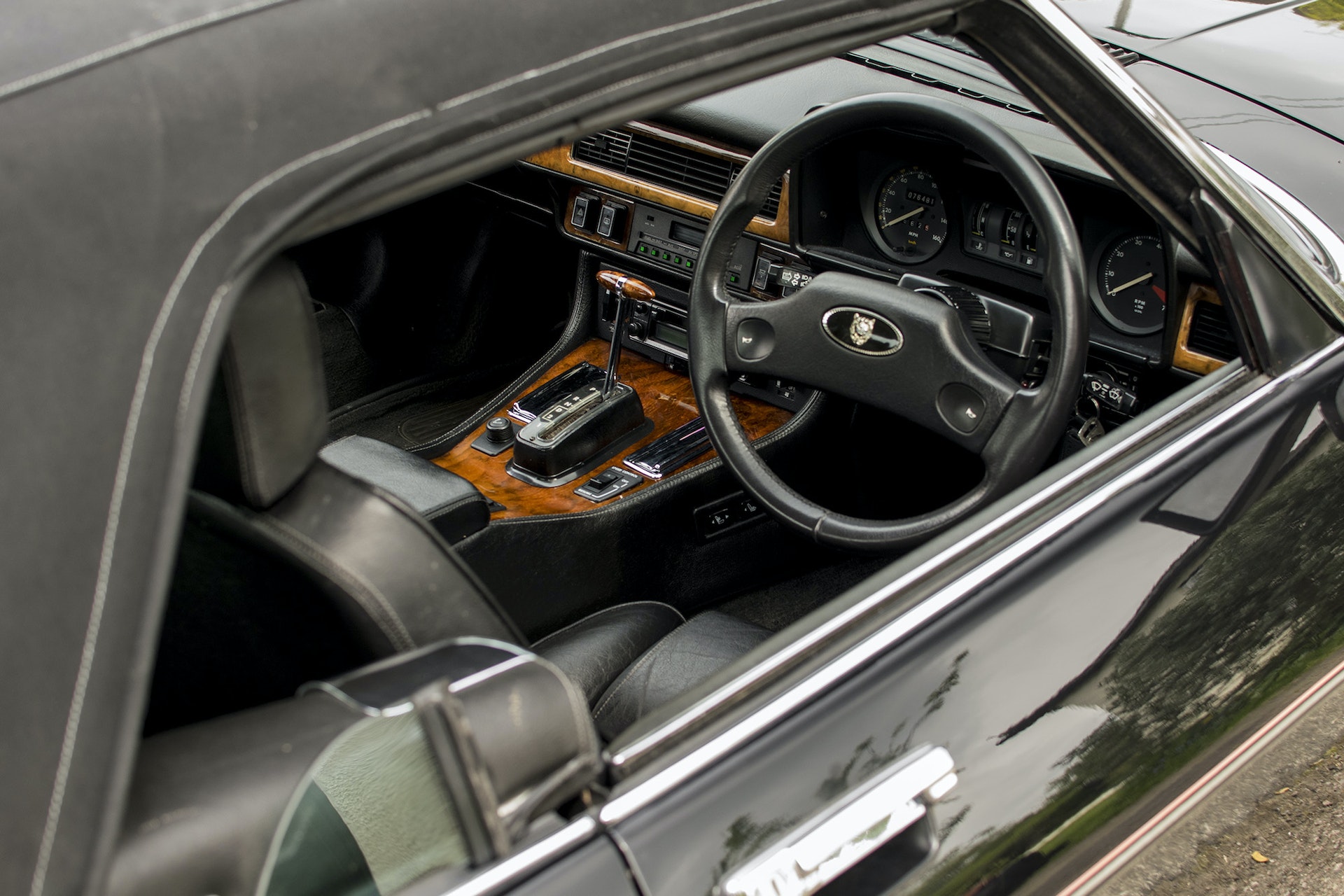 This beautiful drop-top Jaguar is a well-sorted XJ-S V12 HE, and the vendor tells us that it drives superbly. The bodywork is original and rust-free, with only minor imperfections that could be rectified at relatively little cost. It is accompanied by the original tools, spare wheel, and all of the books and literature supplied by the dealer when new. 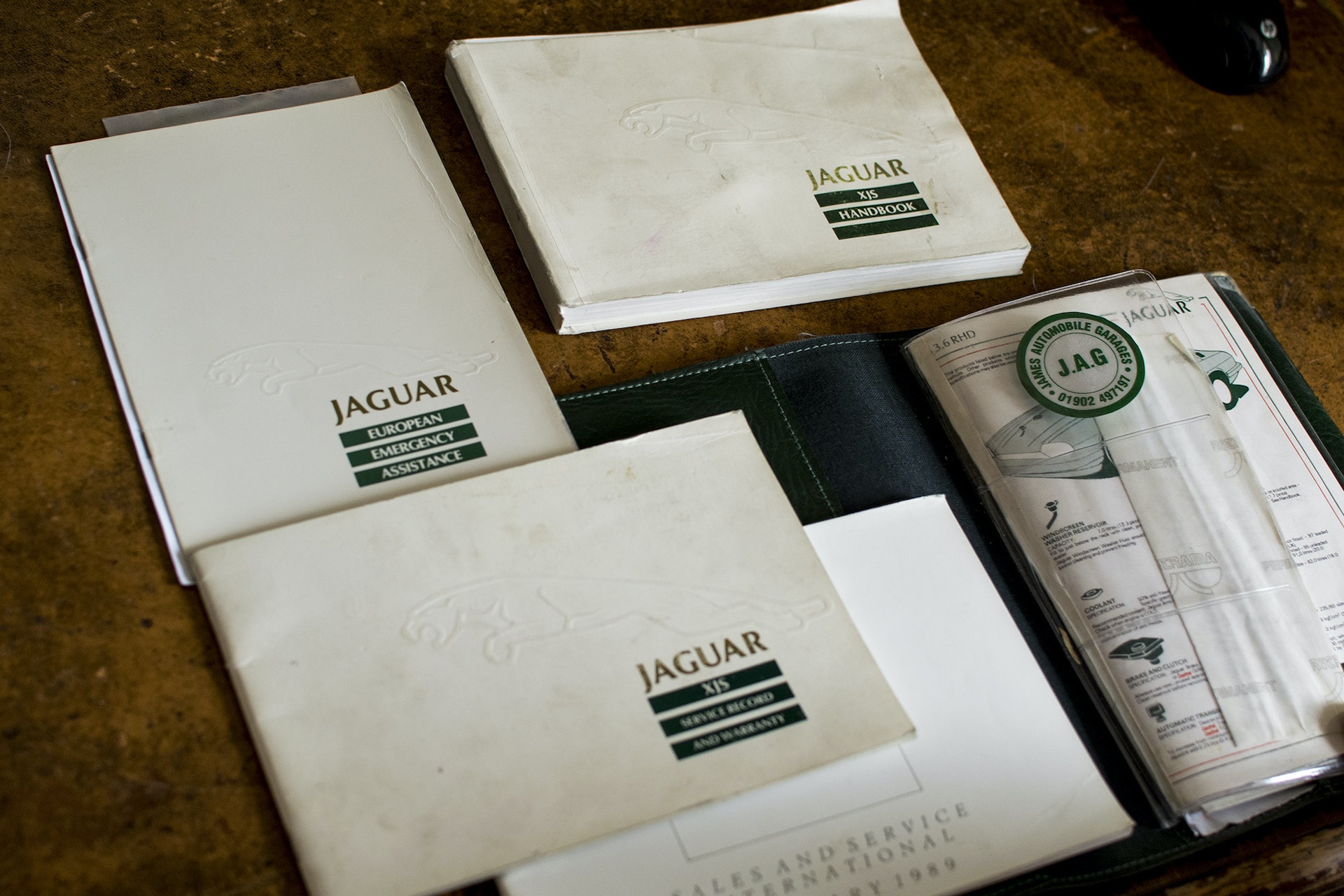 The car has been used daily for the last four years, and is all the better for it, having been cared for to ensure it is in fine fettle. It is now offered to a new owner, needing only minor attention to maintain its excellent condition, and ready to bring a touch of glamour to every occasion.