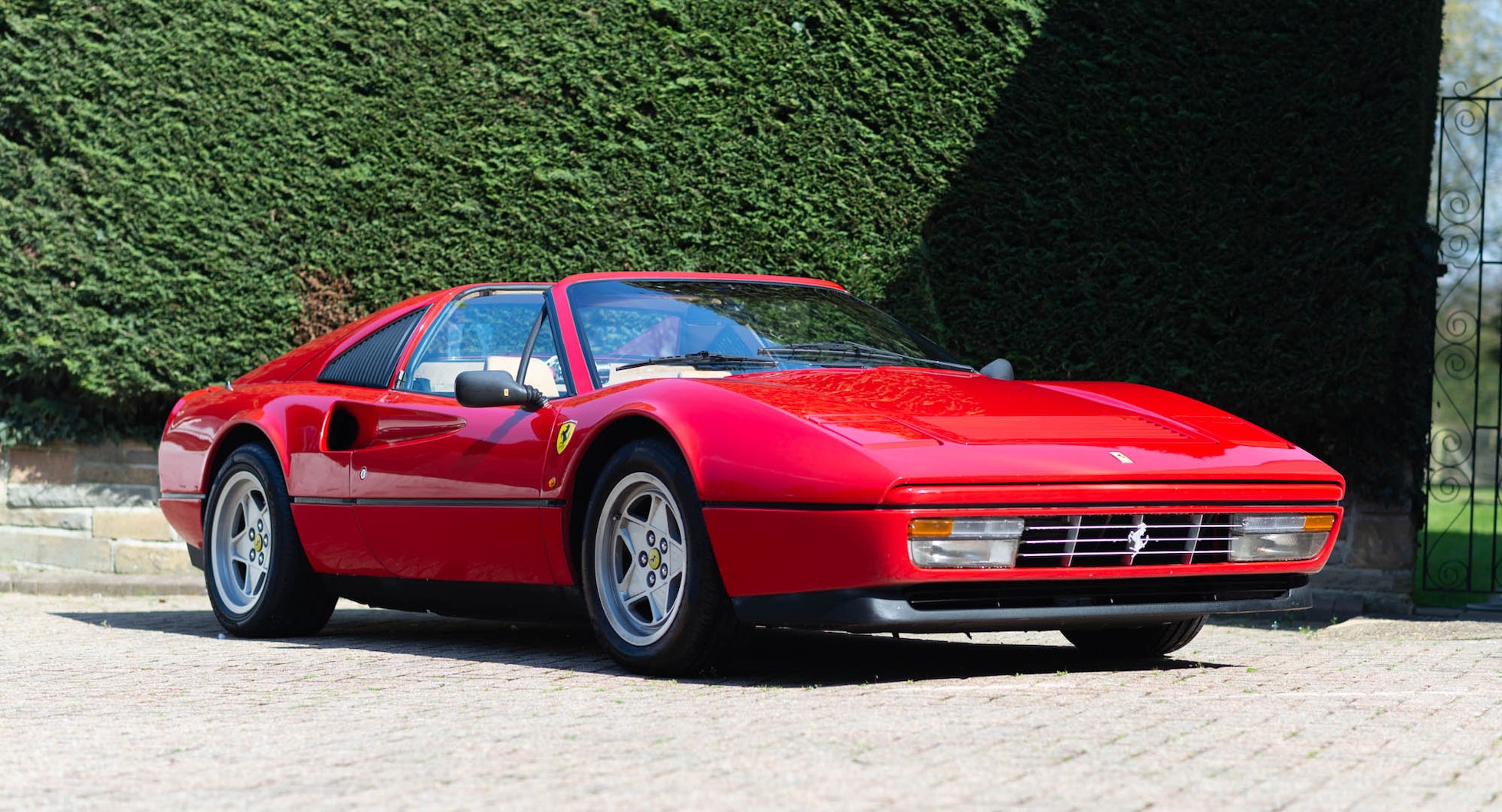 This Ferrari 328 GTS is a wonderful example of a popular 1980s sports car, finished in the timeless colour scheme of Rosso Corsa with beige Connolly leather upholstery. Its engine is the 3.2-litre ‘Tipo F105CB’ V8 producing around 270hp, driven through a five-speed manual transmission. The odometer shows just 47,053 km (29,237 miles). 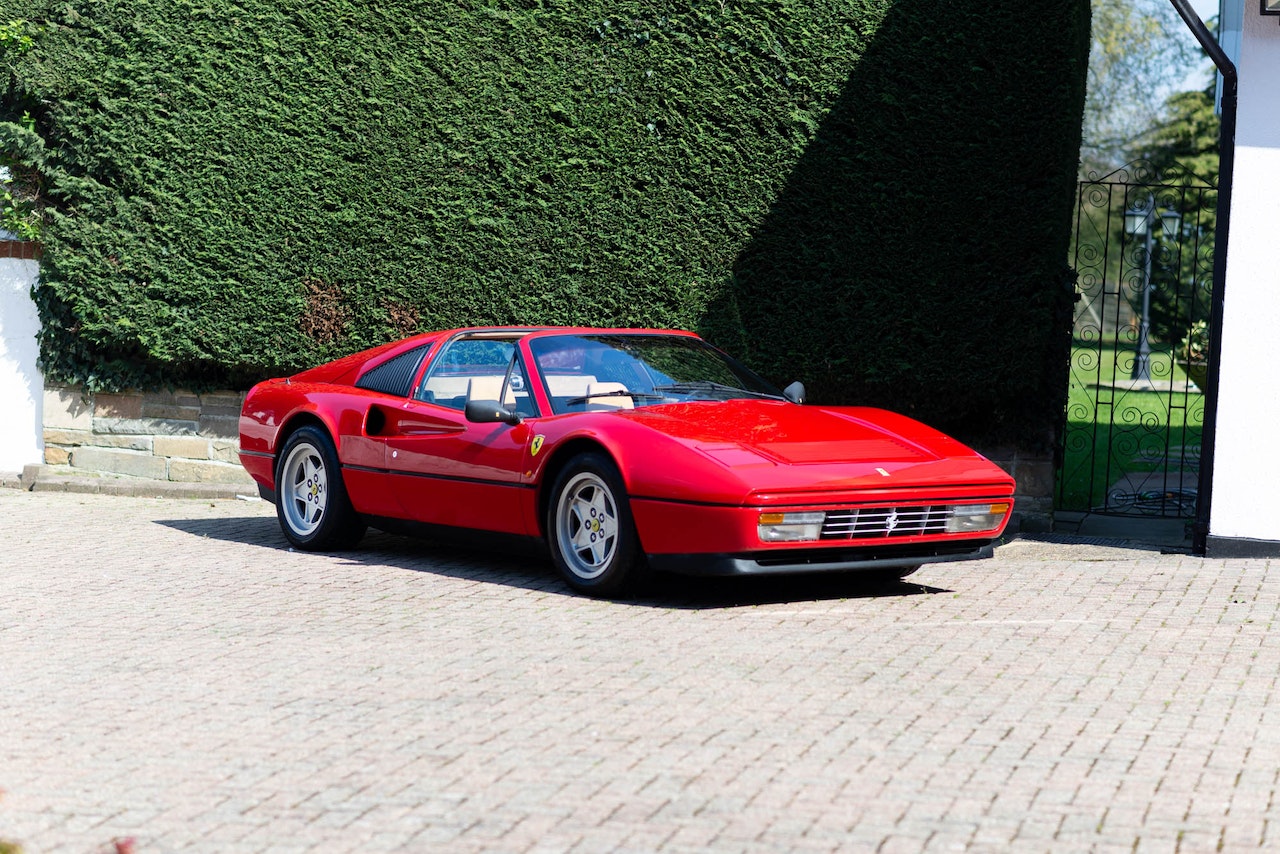 The ‘B-code’ chassis number shows that this car is a European specification left-hand drive example, but in December 1987 it was exported from the continent to the US. It was re-registered in New York state until 2000, when it was sold to a new owner in Colorado. In 2005 it went to Missouri - having only covered around 36,000 km - and later that year to New Jersey. There it remained until being imported to the UK in 2016. Since its arrival, it has had a thorough mechanical inspection and full service, and the current owner has enjoyed around 1,000 km behind the wheel. 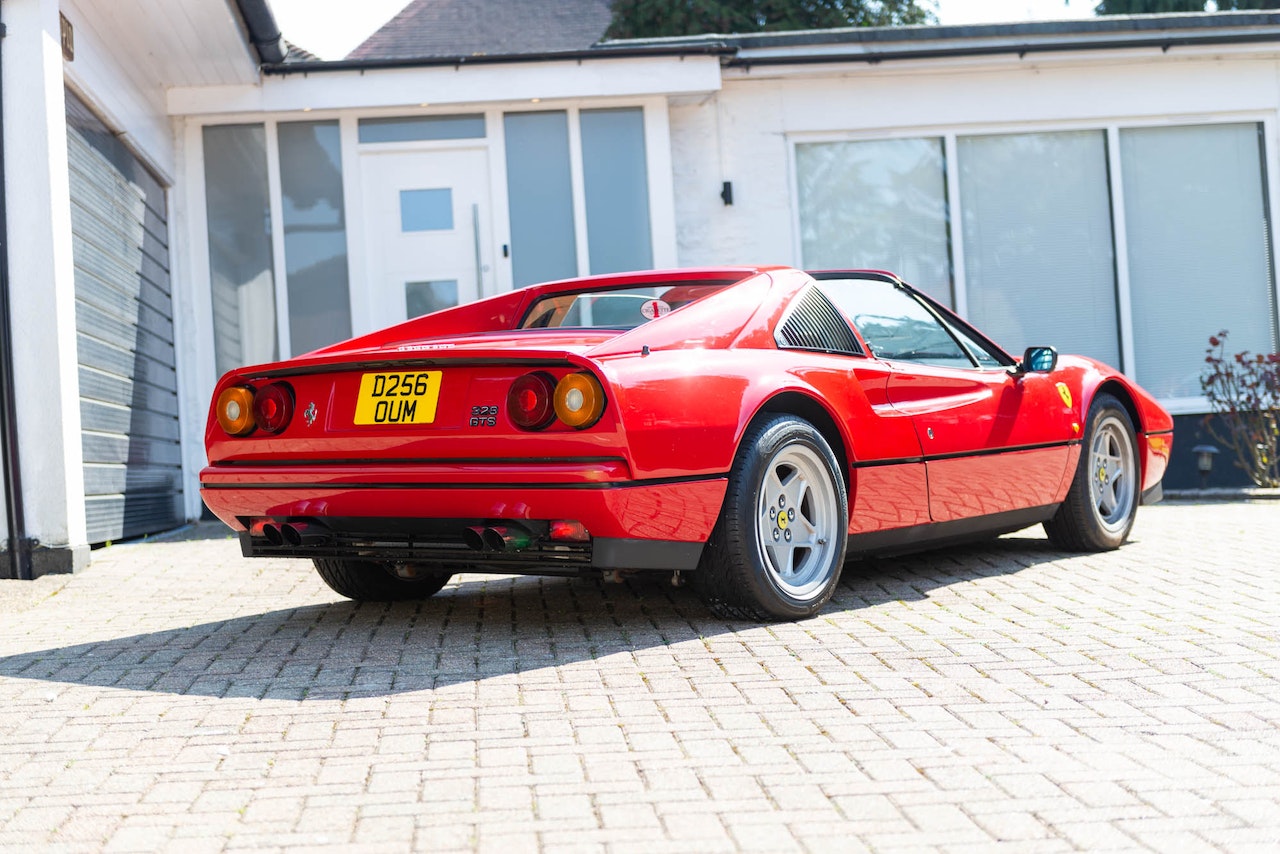 Finished in the iconic Rosso Corsa colour, this 328’s bodywork is in very good order, with no dents or scrapes in the panels. The front valance has recently had a minor repair to the fibreglass, and both front and rear bumpers have been resprayed. The only other note from the seller is that there are some small stone chips at the front, which are shown in the gallery below. 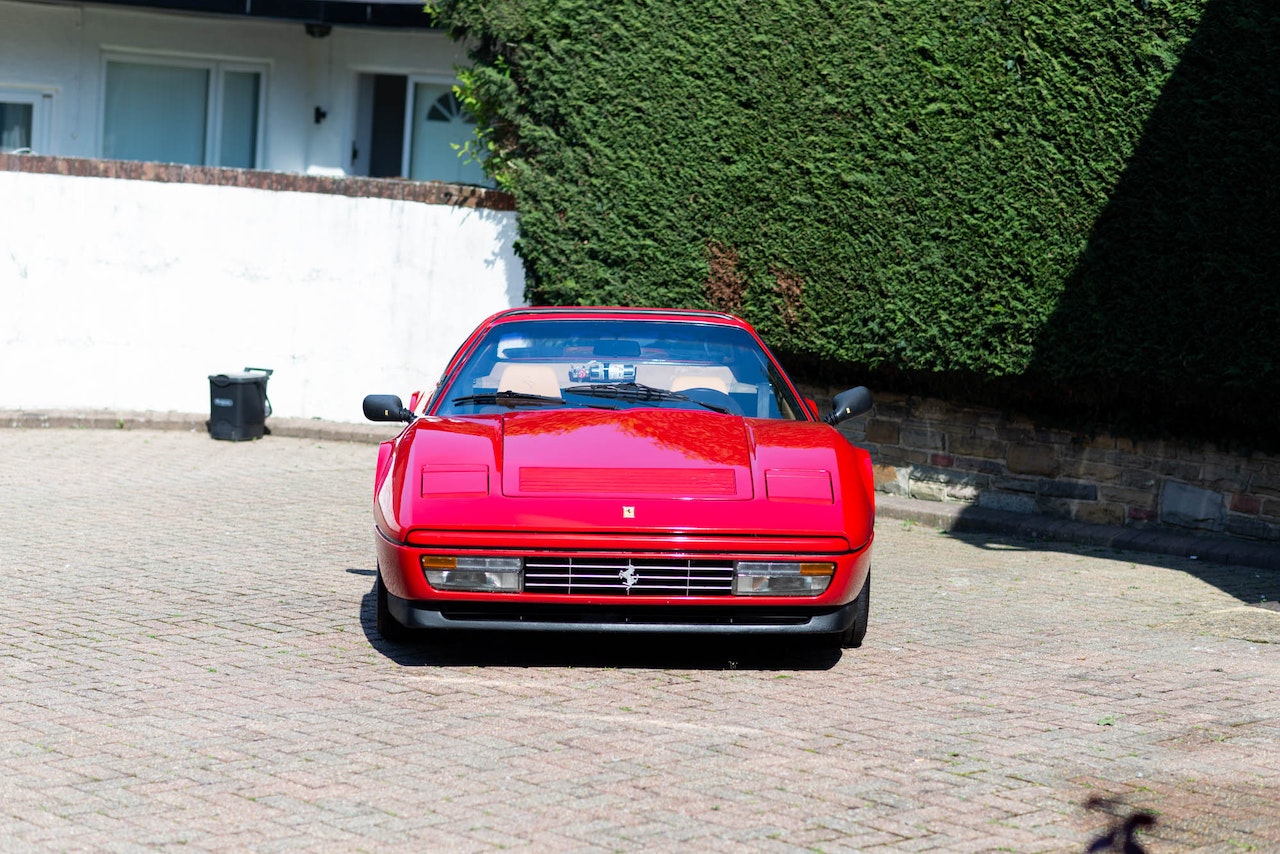 The original Carello light lenses are undamaged, and all of the window seals are in great shape. The roof rubbers under the black targa top are visibly aged and would benefit from replacement if there is likelihood of driving in the rain. It sits on the correct set of concave 16-inch alloys, with a 7-inch width at the front and 8-inch at the rear. The wheels are in superb condition, with clearly defined raised script on the faces indicating that they have never been repainted. 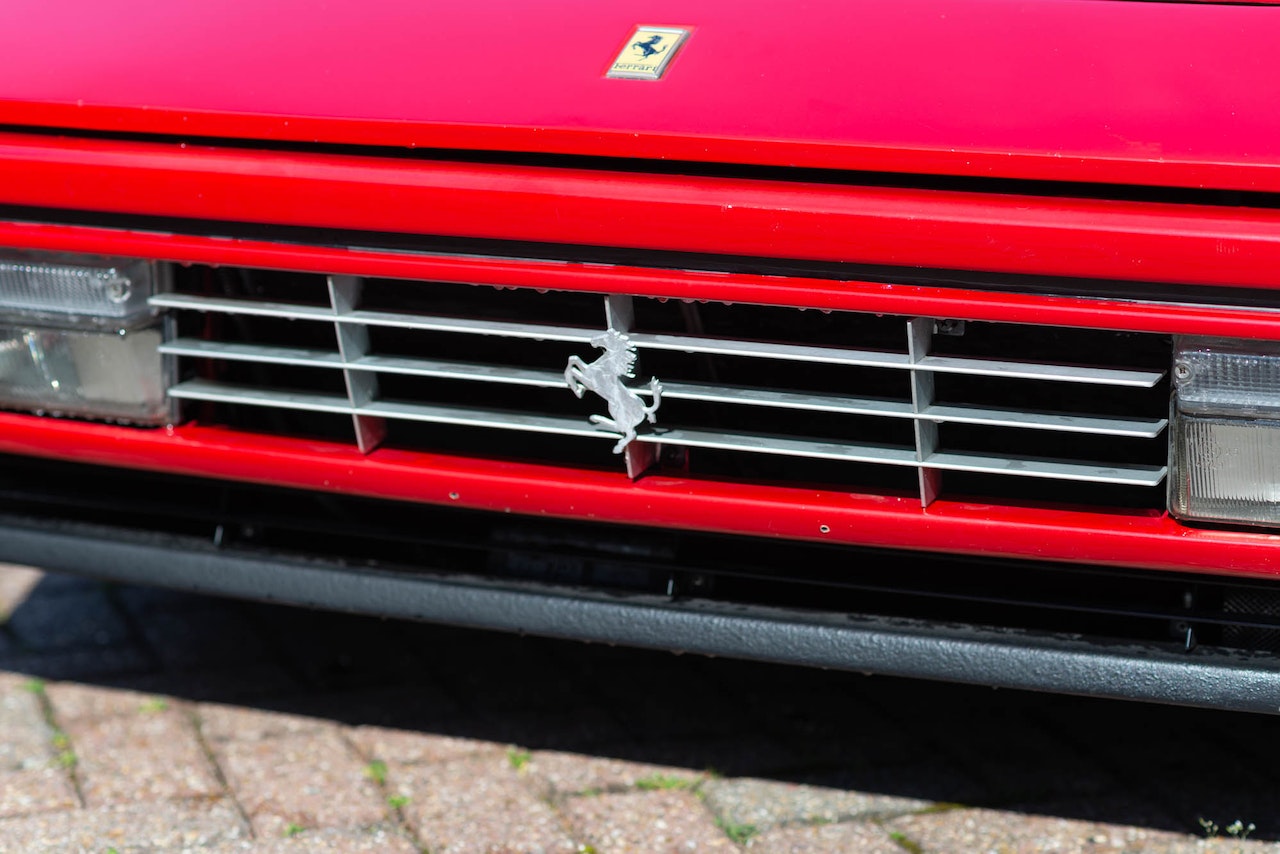 Inside, the beige leather upholstery has no damage whatsoever, and generally presents in pristine condition. There is a water stain mark behind the seats, on top of the nearside rear bulkhead, which was most likely caused by a leaking roof seal at some point in the car’s history. All of the leather trim around the dashboard, centre console and door cards presents smartly, with little visible wear to speak of. 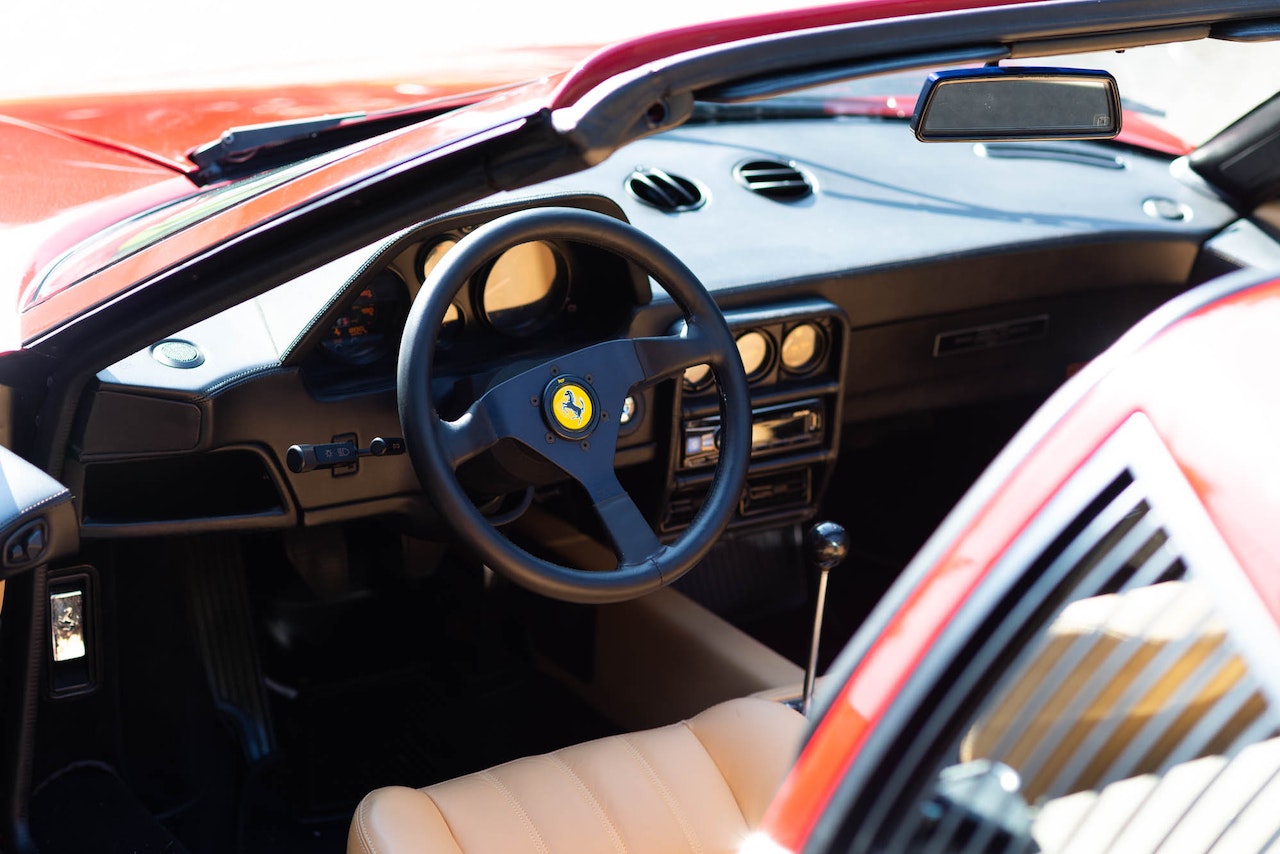 Ahead of the driver is the correct three-spoke steering wheel. The speedometer fascia has been changed to a miles-per-hour main readout, but it is understood that the odometer is still recording in kilometres. All of the switchgear works as it should, and the buttons and levers all remain in excellent cosmetic condition. A contemporary Alpine stereo head unit has been installed, with a CD player and Bluetooth and USB connectivity. 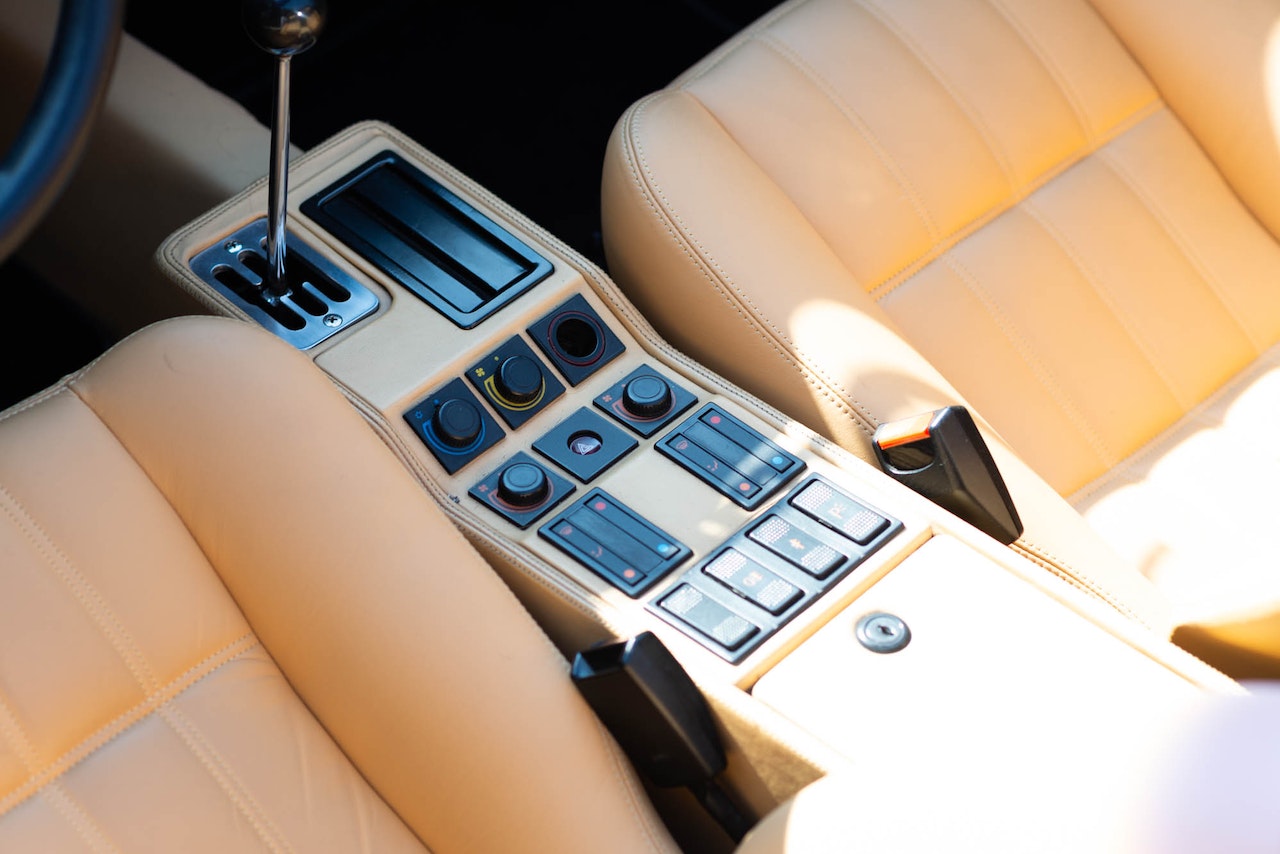 Mechanically, this 328 GTS is now in strong condition, following refurbishment and replacement of various components in May 2016, after it arrived in the UK. All of the work has been carried out by Dick Lovett Ferrari in Swindon. 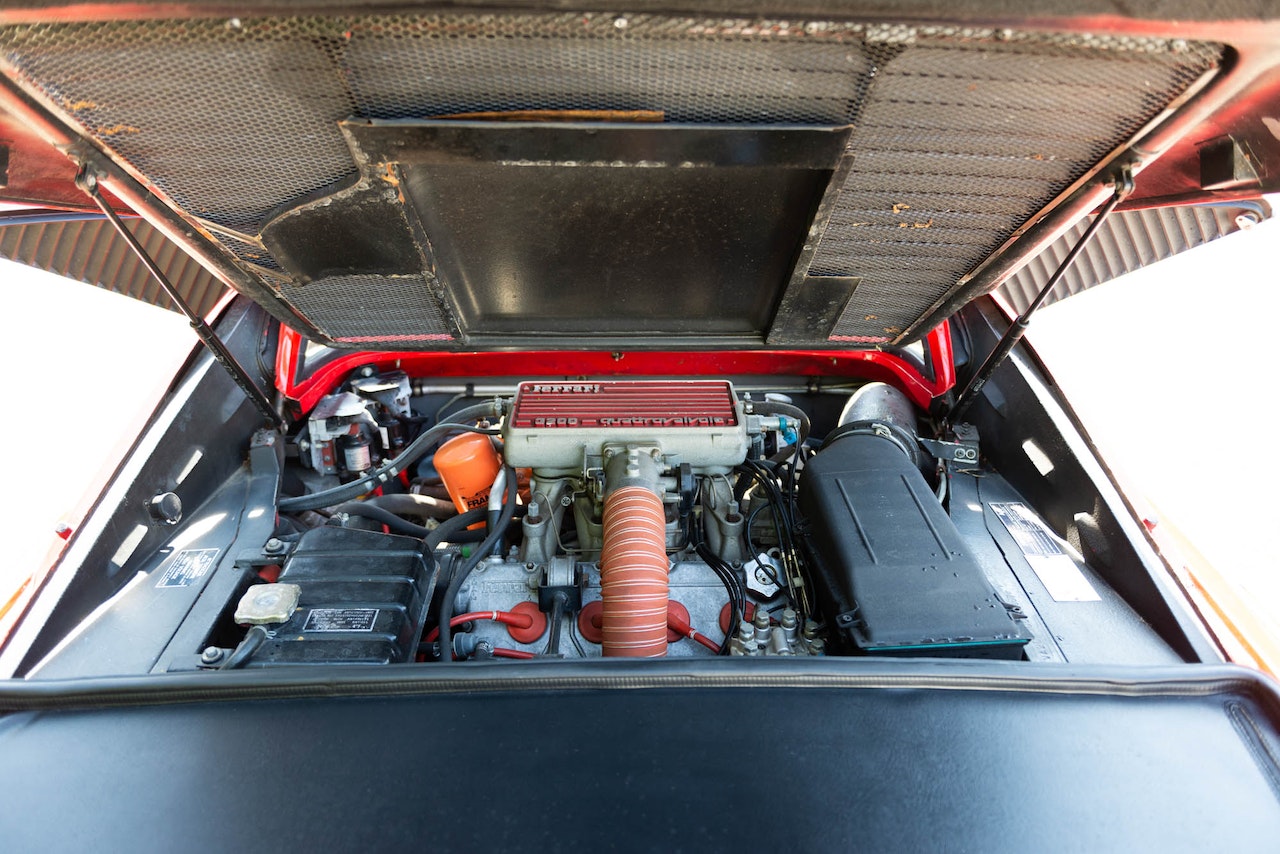 The overhaul included a full engine oil and filter service, replacement of the camshaft timing belts, alternator belt and air-conditioning compressor belt, renewal of the brake fluid, fresh coolant, and a new handbrake cable. The oil seal gaskets to the rear rocker cover, engine sump and gearbox sump pans were also replaced, and the engine bay was then steam cleaned. Its rear brake calipers were stripped down and refurbished, and the headlight beams were converted. 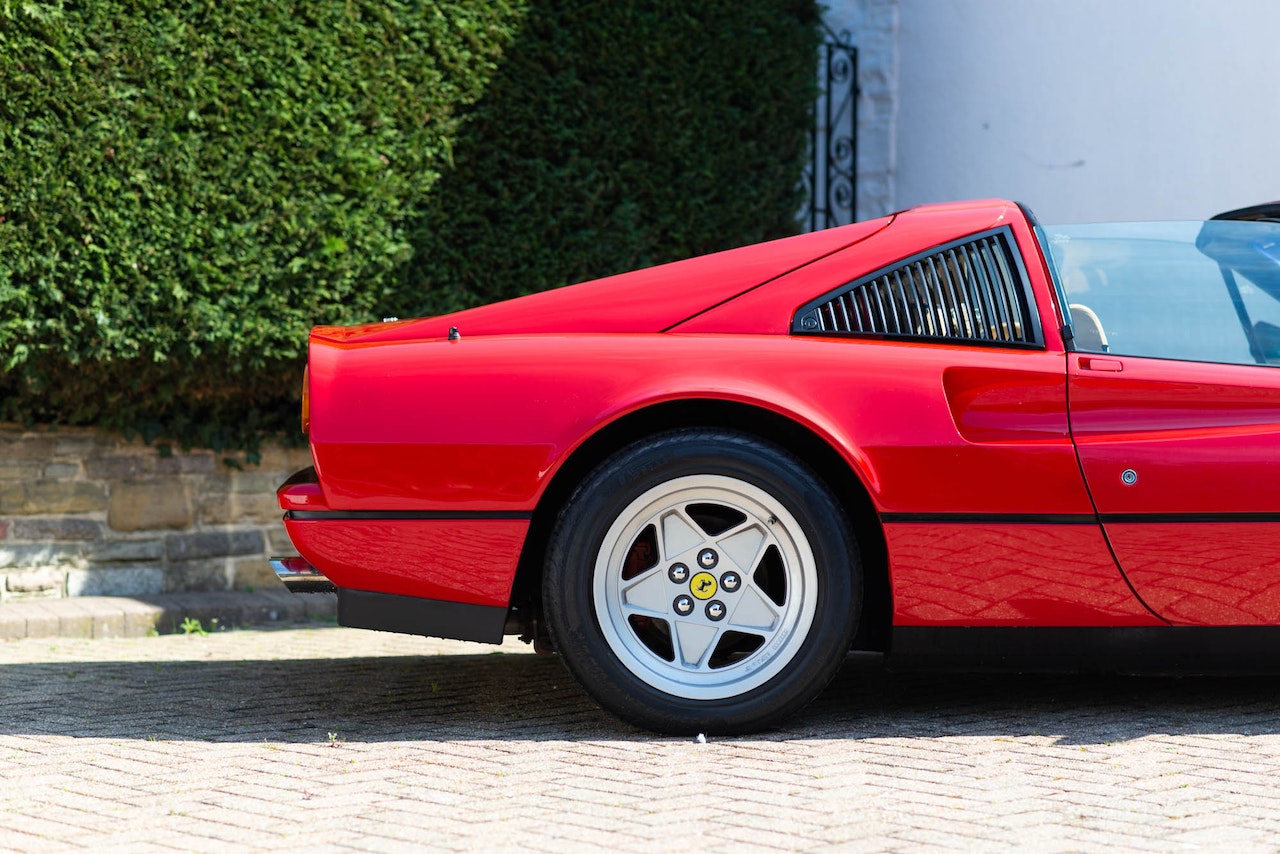 Its last MOT test was on 1 June 2019 at 46,780 km, which resulted in a clean pass with no advisories. The alloy wheels are shod with 205/55 ZR16 Pirelli Cinturato P7 tyres at the front and 225/50 ZR16 Pirelli P Zero Nero tyres at the rear. All four tyres are relatively new and remain in very good condition with plenty of tread. 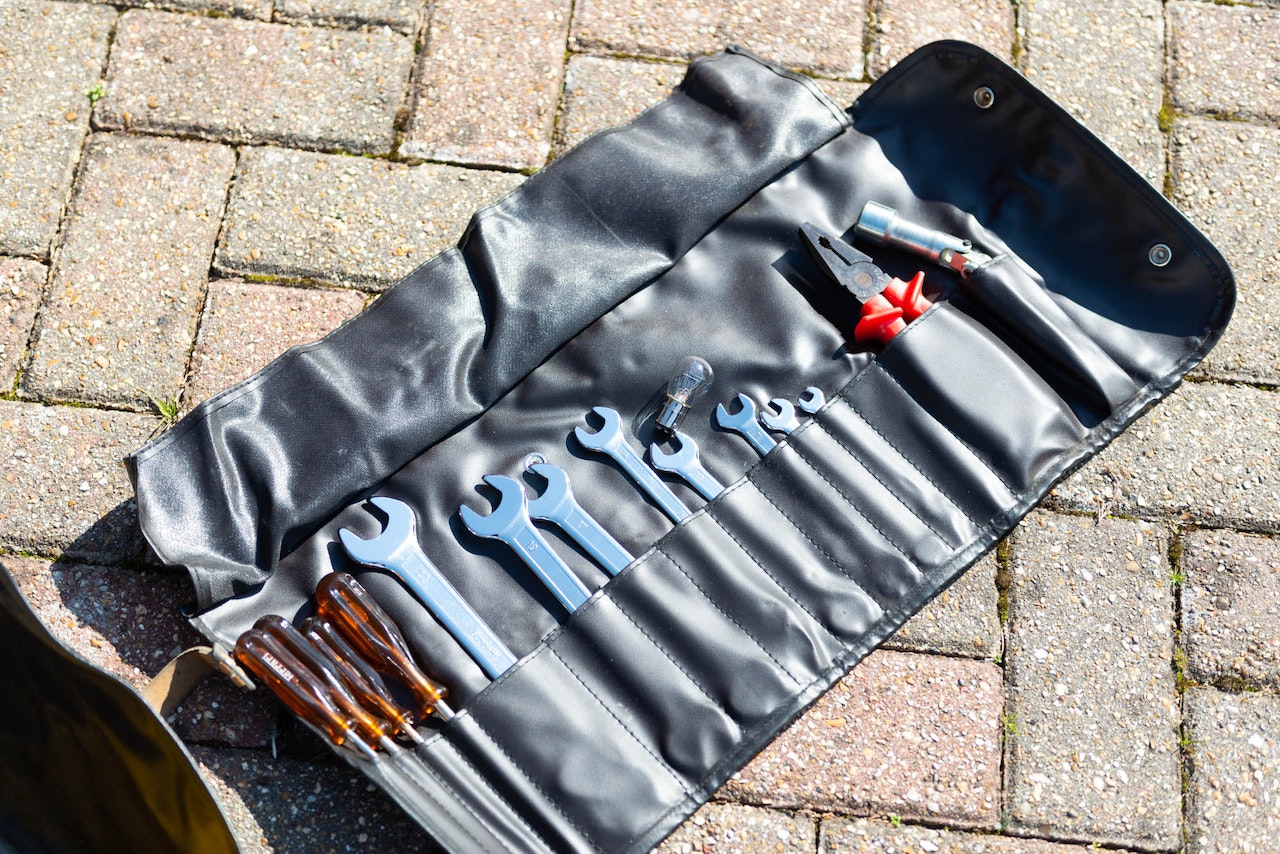 Accompanying this 328 GTS is the original tool roll, jacking kit, and even the space-saver spare wheel. All paperwork for maintenance at Dick Lovett is in the history file, along with a letter of EU conformity from Ferrari SpA. 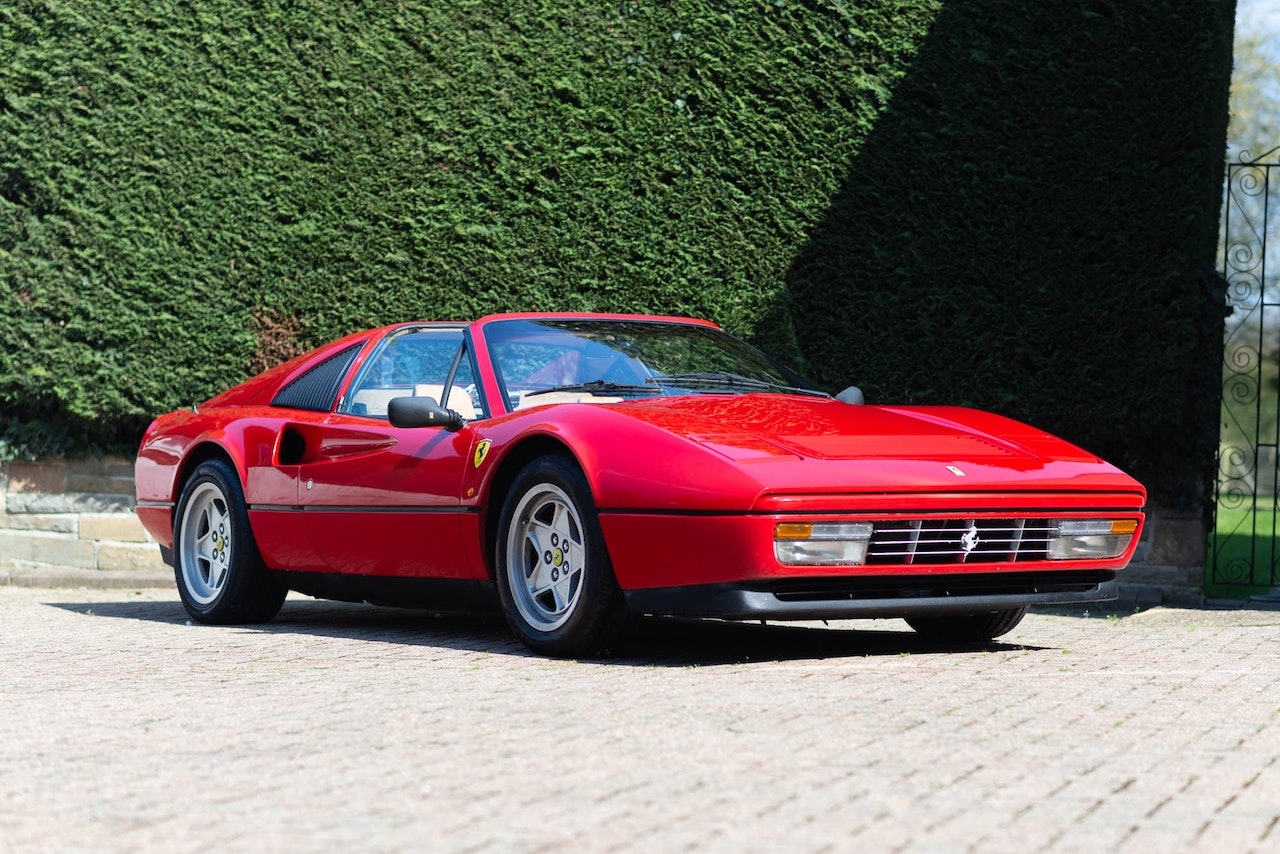 This Ferrari 328 GTS is a smartly presented and instantly recognisable 1980s sports car. The 328 is a good choice of first Ferrari for those looking for a classic model rather than a contemporary supercar, and this particular car benefits from lots of recent work to ensure that it performs strongly. It is certain to put a smile on the next owner’s face whenever it’s out on the open road, and would make a great addition to any collection.