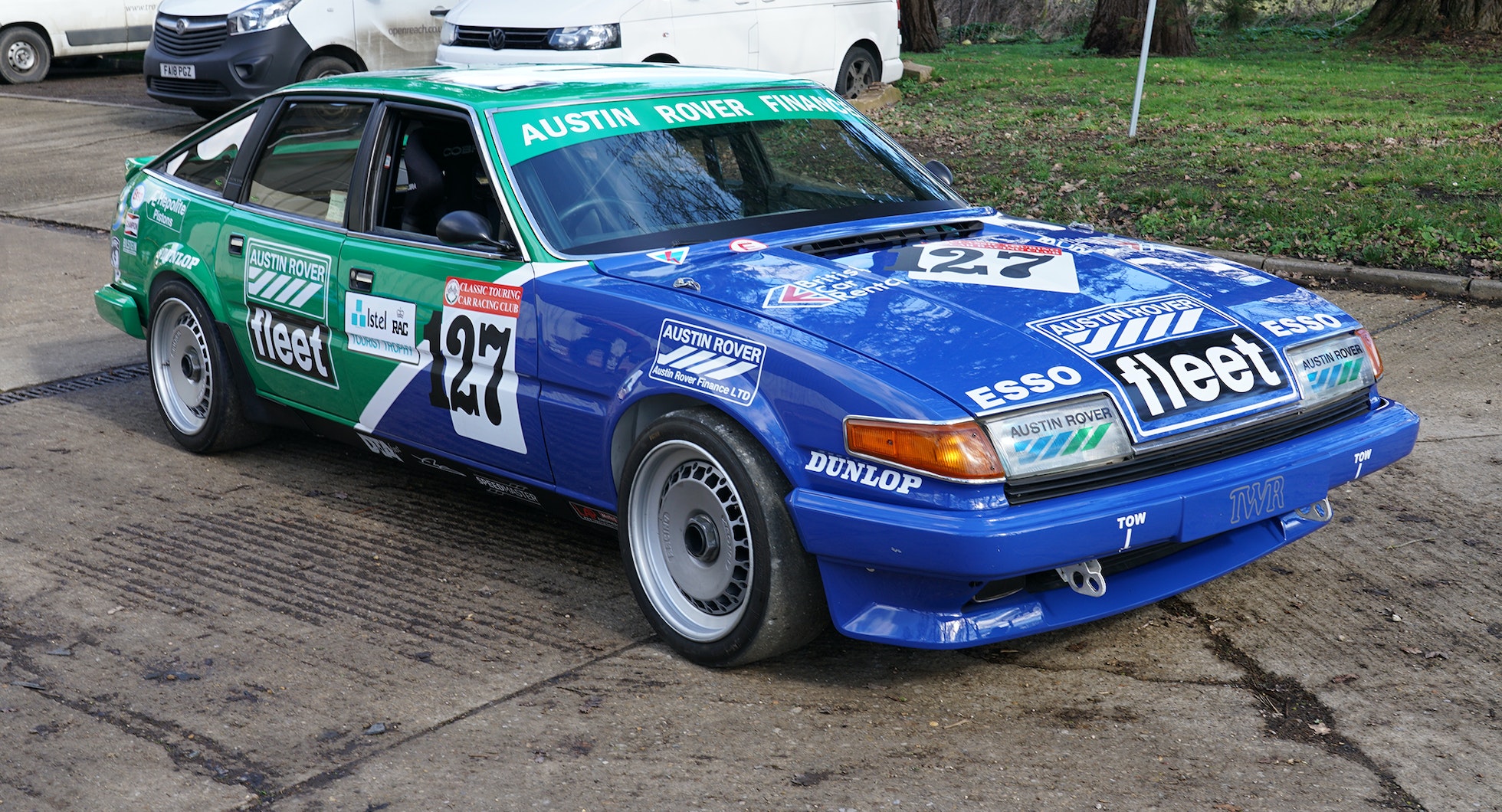 This Rover Vitesse SD1 is the result of an exceptional ground-up build, which aimed to create a perfect tribute to the TWR/010 Group A competition car from the mid-1980s. It is powered by an original TWR-prepared 3.5-litre Rover V8, producing around 300bhp, with rear-wheel drive via a five-speed manual transmission. This is a fresh build using new safety equipment, with current FIA HTP papers valid to the end of 2028, and with around 100 test miles completed. 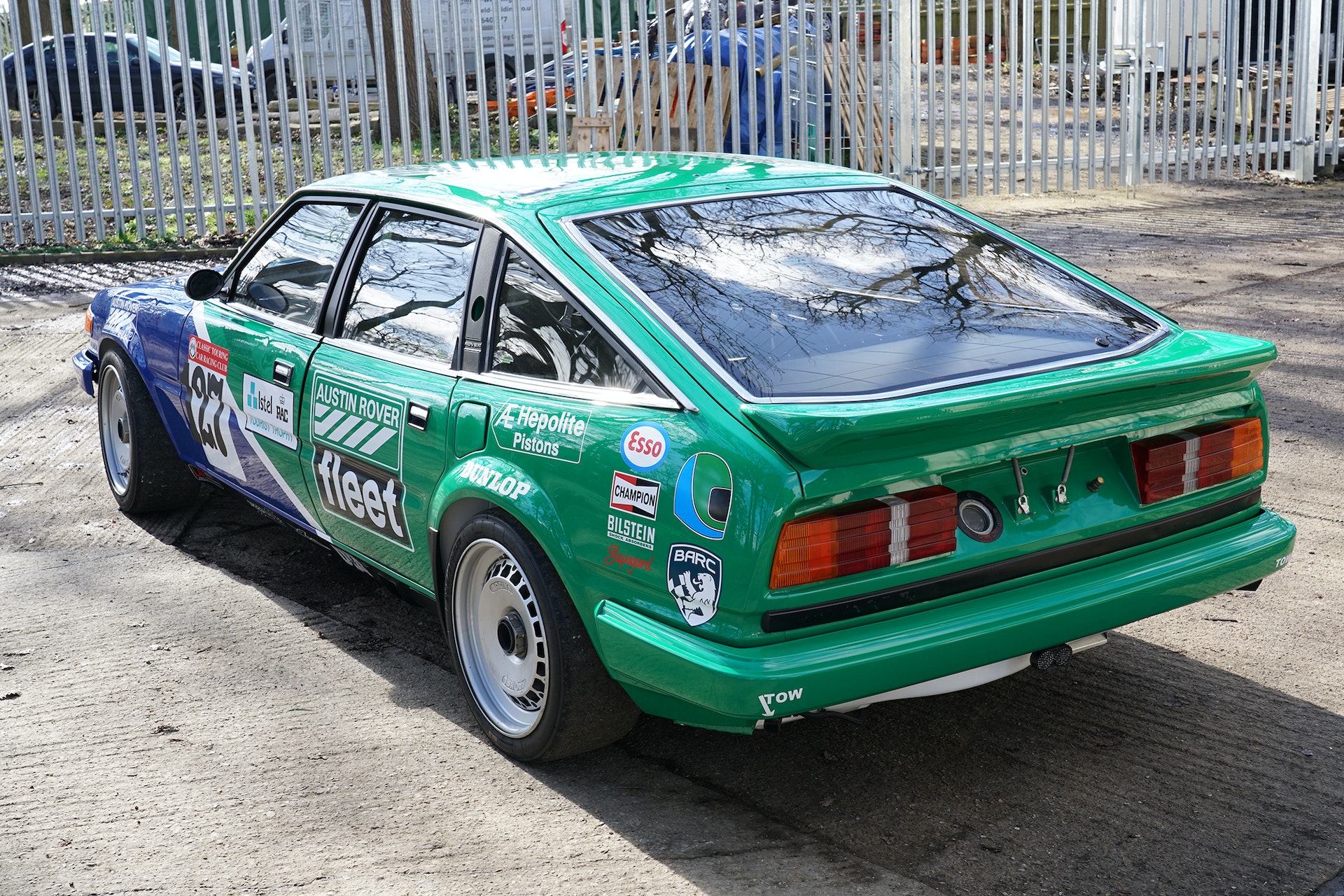 When revealed in 1976, the Rover 3500 - as it was known - was lauded as a styling triumph. During development, a full-size model of the final design was lined up alongside Italian exotics like the Maserati Bora and Indy, and its lead designer David Bache later went on record to say that the Ferrari 365 GTB/4 Daytona had been a significant influence. 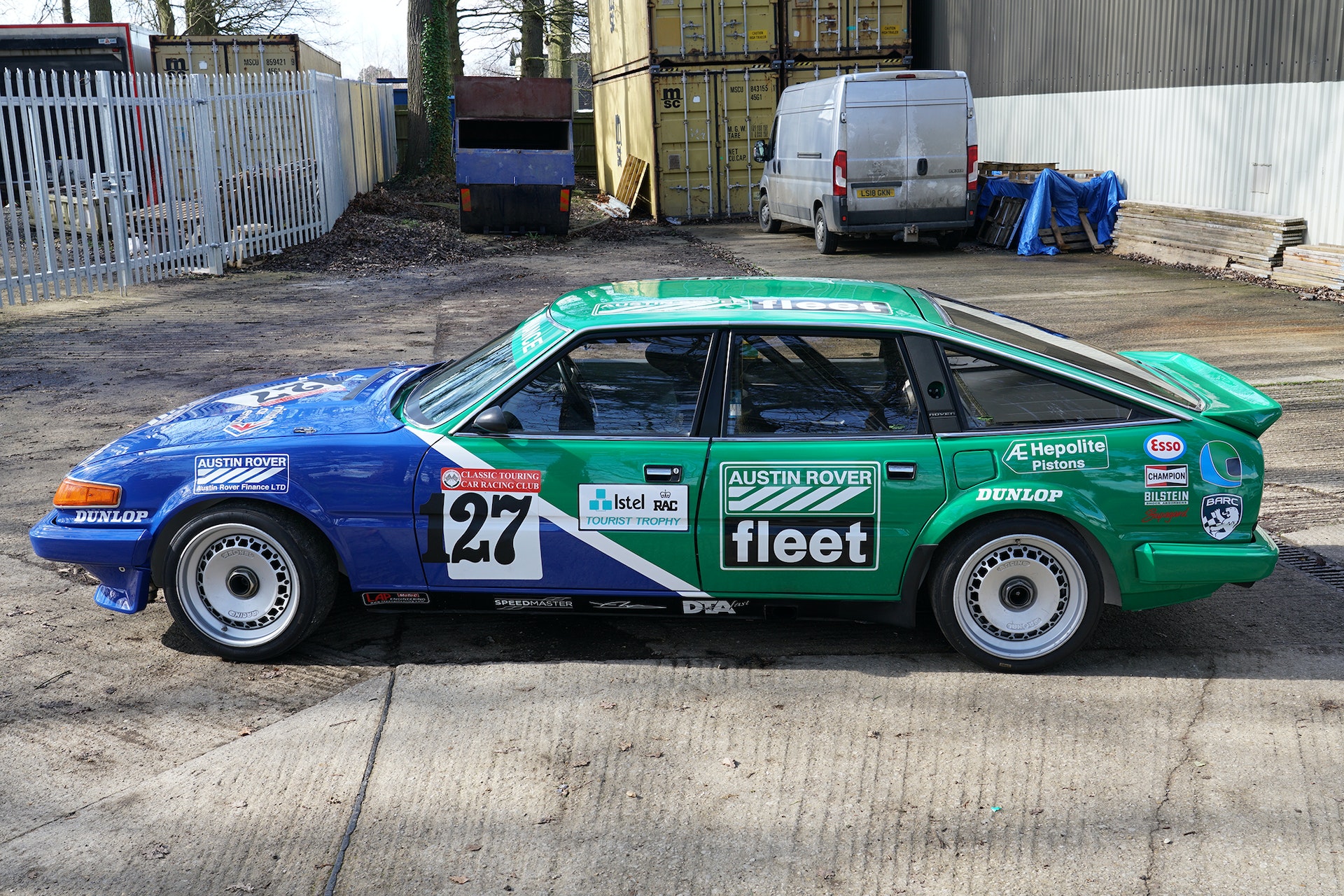 While quality issues affected its sales to the general public, the introduction of the Group A regulations in the mid-1980s allowed the fastback Rover to shine on the track. Vitesse models built by Tom Walkinshaw Racing notched up multiple wins between 1983 and 1986, driven by the likes of Steve Soper, Tony Pond, Pete Lovett, Jeff Allam, and Walkinshaw himself. One of the original 1984 TWR cars, chassis 010, was written off after a major accident at Silverstone during the Tourist Trophy - and it is this car that has been recreated in masterful detail here. 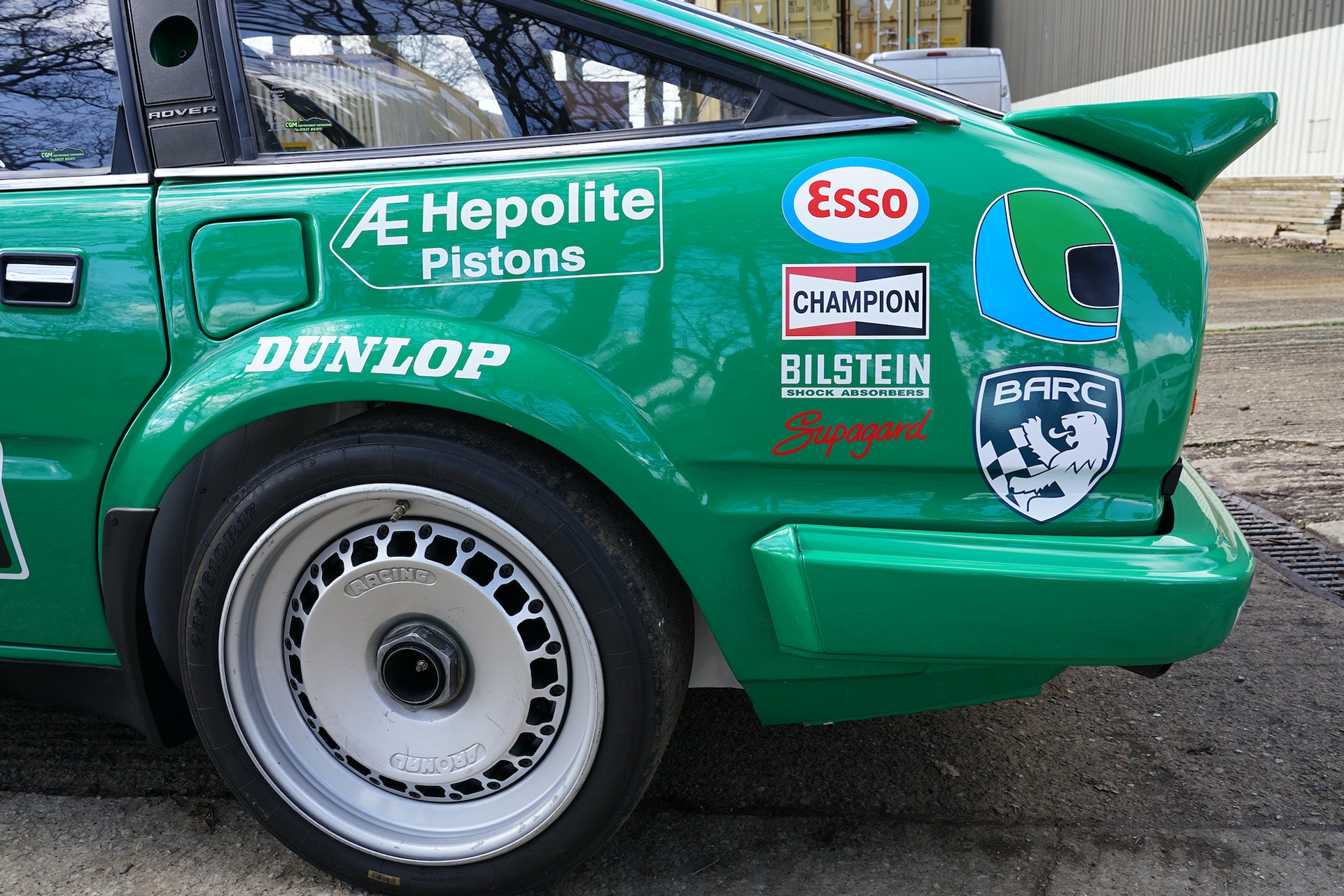 Built to the same specifications as the TWR Group A ‘Works’ cars, this Rover Vitesse was constructed by historic motorsport specialist Alan Strachan. Starting with an SD1 shell, the body was completely stripped to bare metal, then seam-welded as the original TWR cars were, and strengthened inside with a full roll cage. 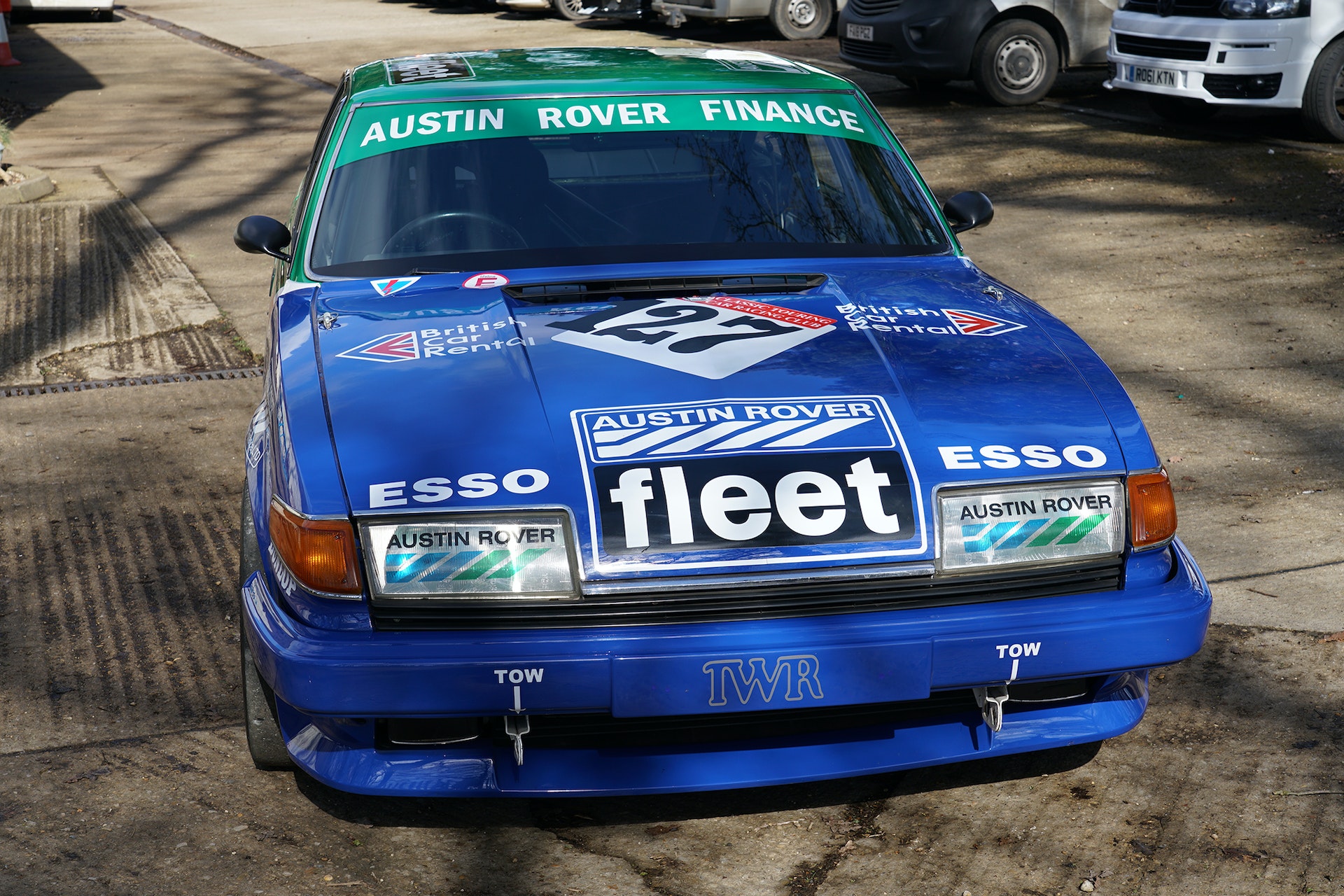 It has been painted in the same eye-catching livery as the original, with the bright green and blue British Leyland colours, and the period-correct Austin Rover Fleet, British Car Rental and RAC Tourist Trophy logos among others. Far from being simply a replica using all-new components, this car features significant original works parts, including a TWR-prepared engine, rear axle, suspension uprights, hubs and wheels. 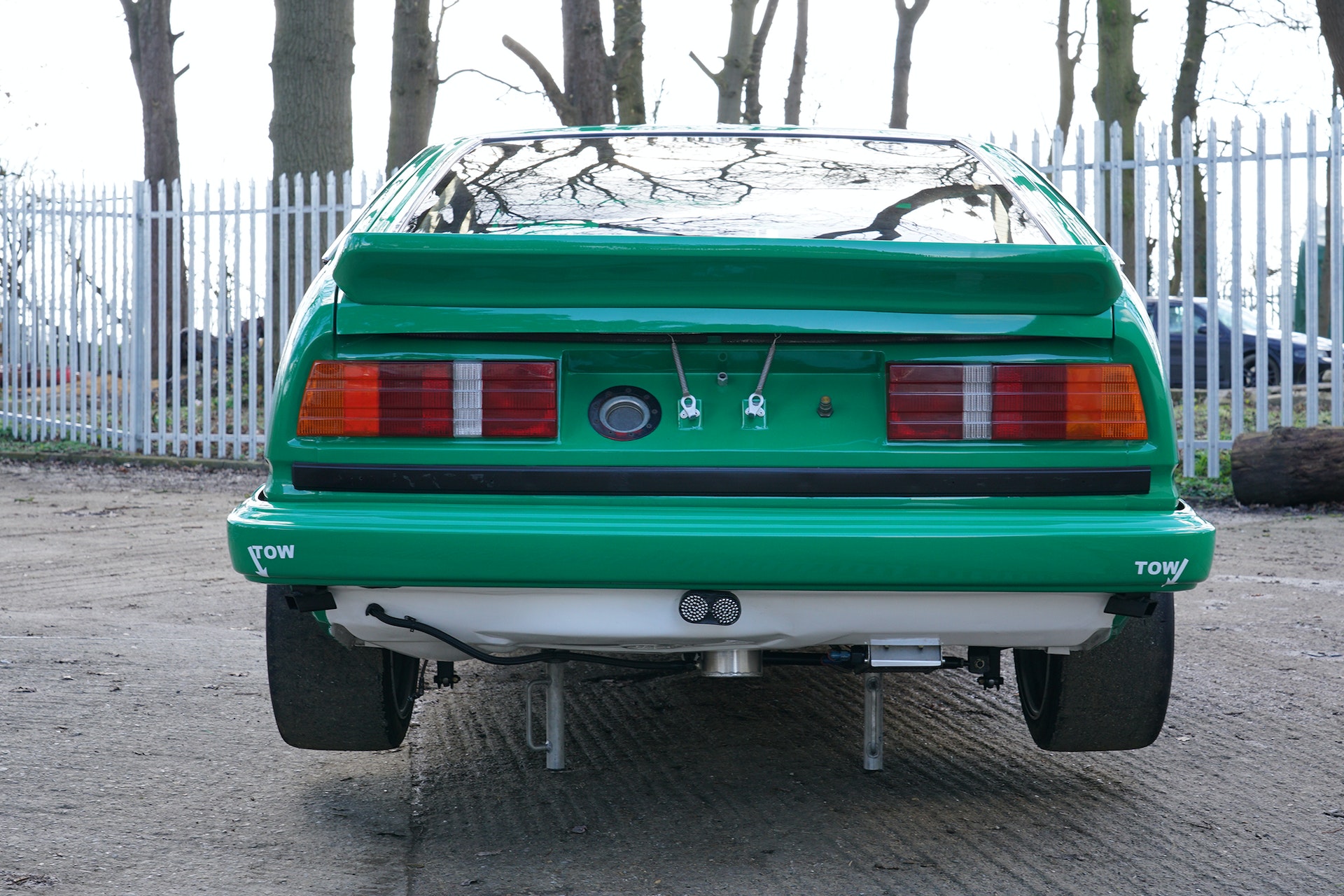 Having only covered testing and shakedown mileage since the build, the Rover’s green and blue paintwork remains in great condition, with only a few minor chips at the front. It features quick-release style fastening pins on the bonnet, and spring hooks on the boot lid. There is also an air-jack lifting system, again as per the period cars. The wheels are original Ronal Racing split-rim items with hexagonal centre locks, which have only some minor blemishes around the edges. 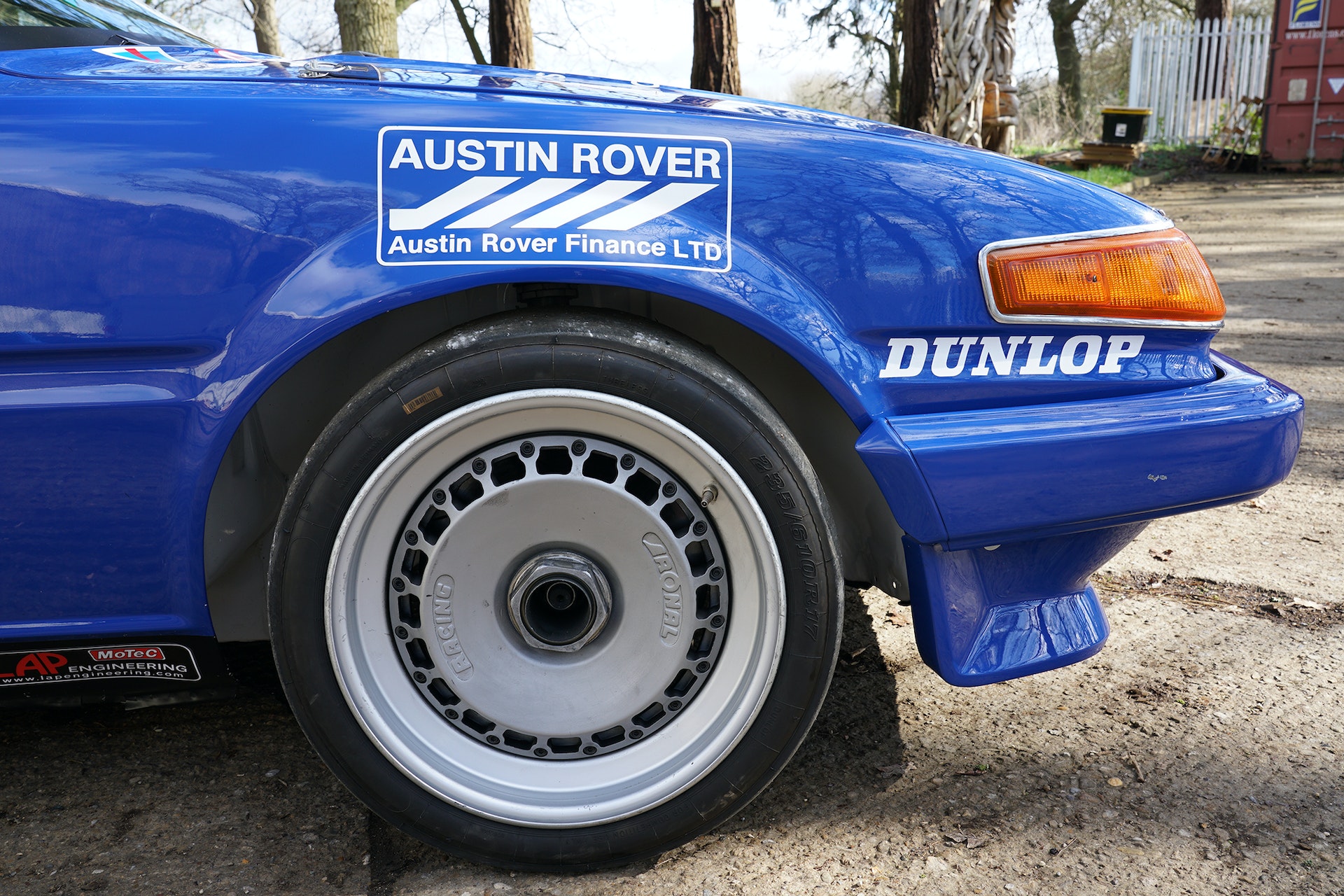 The stripped-out cabin retains only the basic door cards, as well as the core dashboard moulding. The asymmetric roll cage is powder-coated in black, and there is a custom-made centre console and switchgear box. A Cobra Sebring S fixed-back composite competition seat is installed, with rock fabric and Suede Tec trim. It incorporates a HANS-compatible head restraint design, and there is a four-point TRS racing harness. 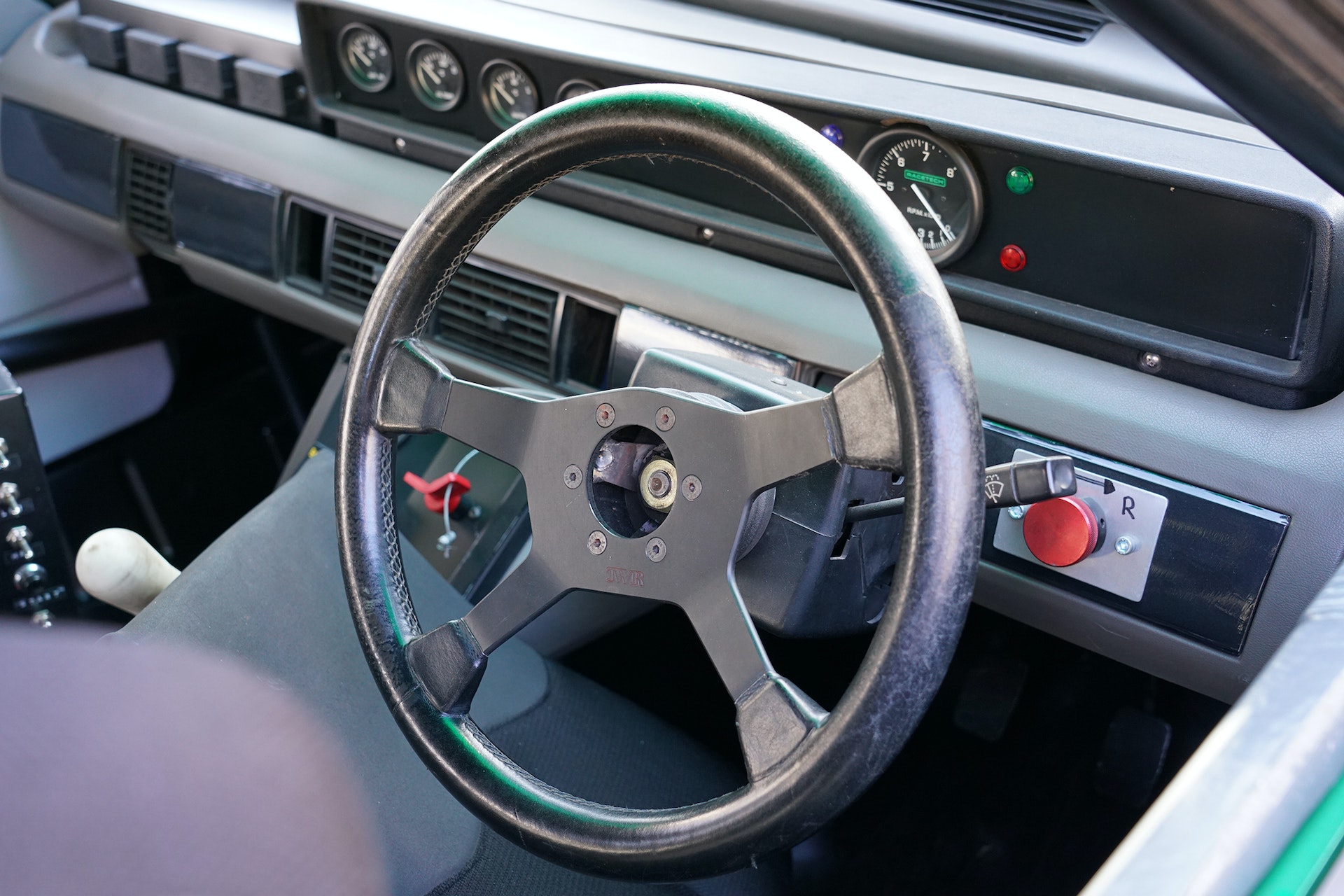 The four-spoke TWR steering wheel appears to be an original item, with a pleasingly patinated leather-trimmed rim. A Racetech rev counter is mounted centrally behind the wheel, with other temperature and pressure instrument gauges to the left, but oriented towards the driver. A stack of metal toggle switches for the main functions is within easy reach, and the cabin is also equipped with a Lumenition air-fuel ratio monitor, and a Lifeline fire suppression system. 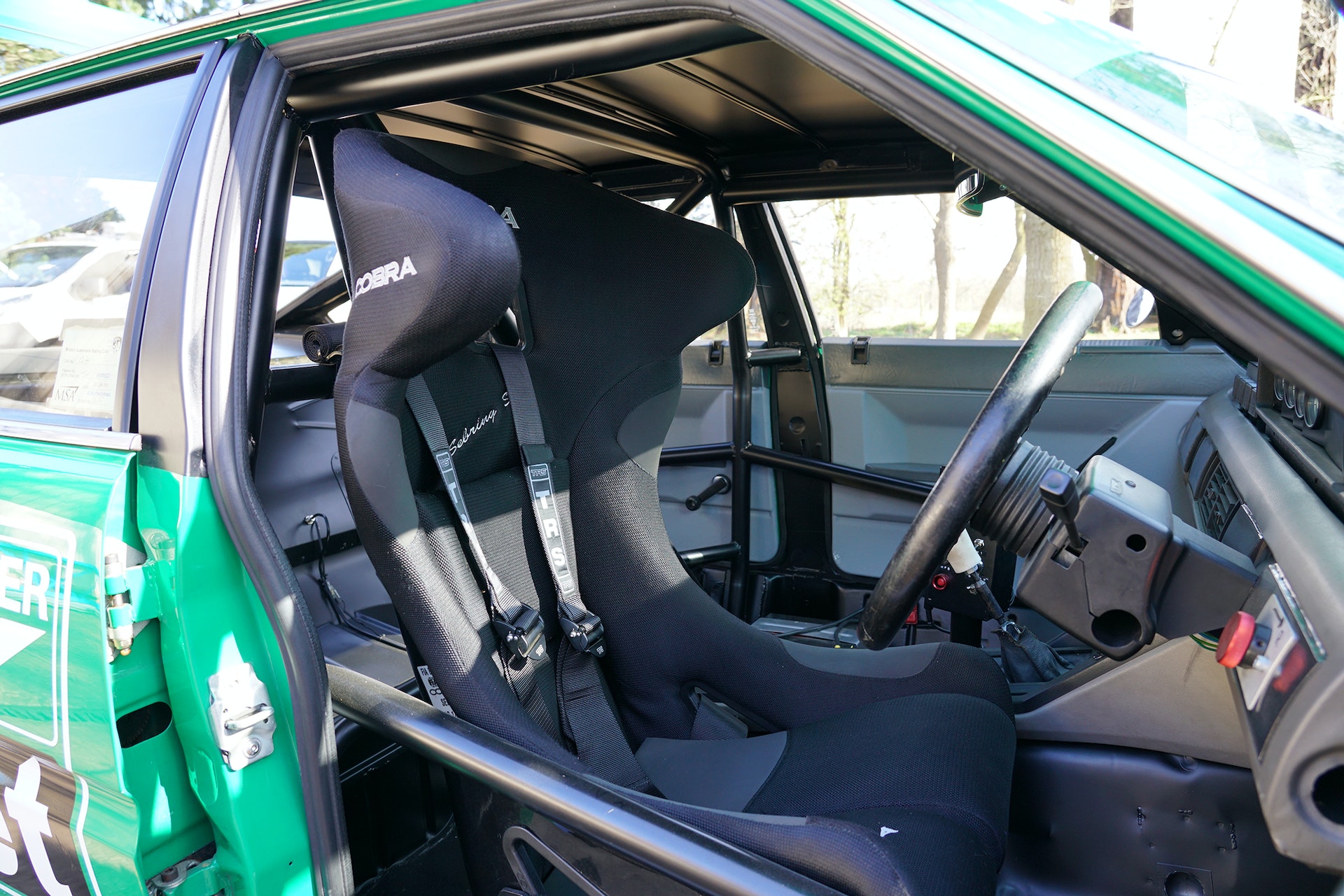 At the heart of this Group A racing car is an original TWR-prepared single-plenum 3.5-litre engine, freshly rebuilt using components supplied by Rover V8 specialist John Eales (J E Developments). It has subsequently been certified by Motor Racing Legends and sealed to current FIA historic series specifications. Running on an unsilenced exhaust, the V8 makes an impressive and addictive noise. 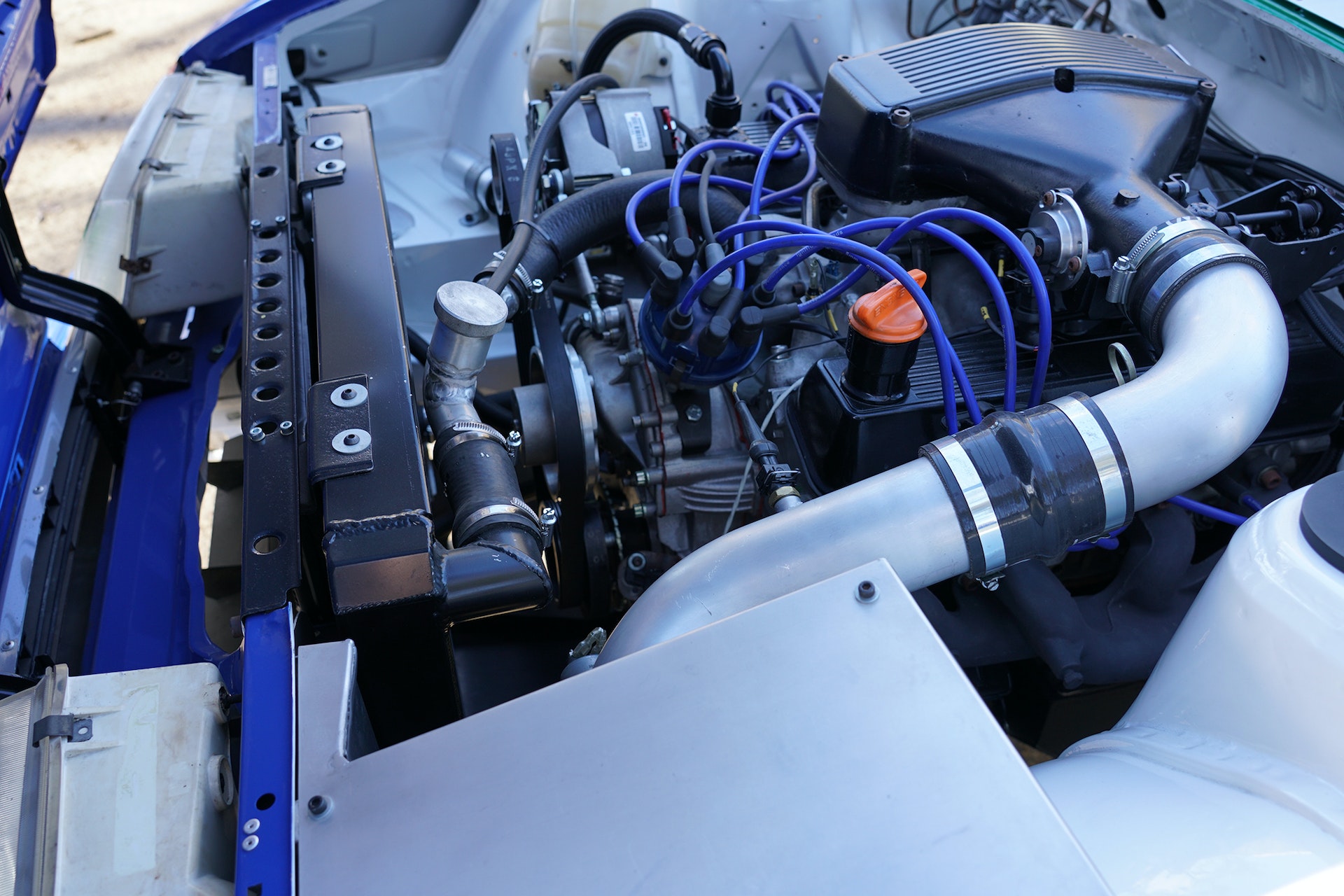 The original TWR rear axle has been rebuilt, as has the five-speed Getrag transmission. Its suspension uprights and wheel hubs are also TWR items, and it is equipped with Bilstein shock absorbers and AP Racing brakes. The Ronal Racing wheels are shod in a set of slick Dunlop tyres in size 235/610 R17 all round. 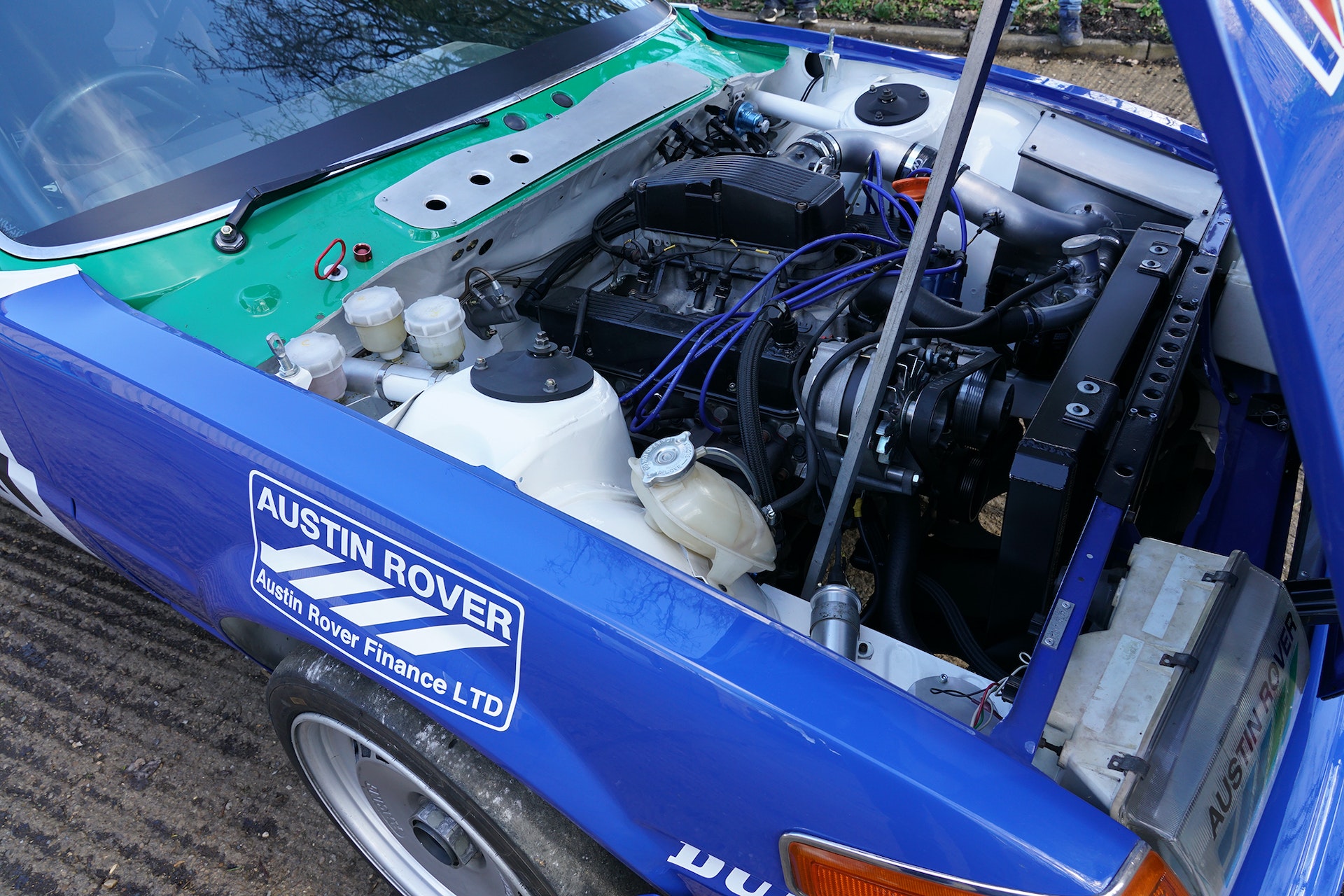 Following the build, the car was issued with a full FIA Historic Technical Passport (HTP) in 2018. It has since completed only shakedown mileage, and a roll-out test in the Historic Touring Car Challenge at the 2018 Donington Historic Festival. The Rover is presented today in ‘ready to race’ condition, and comes with a basic spares package. 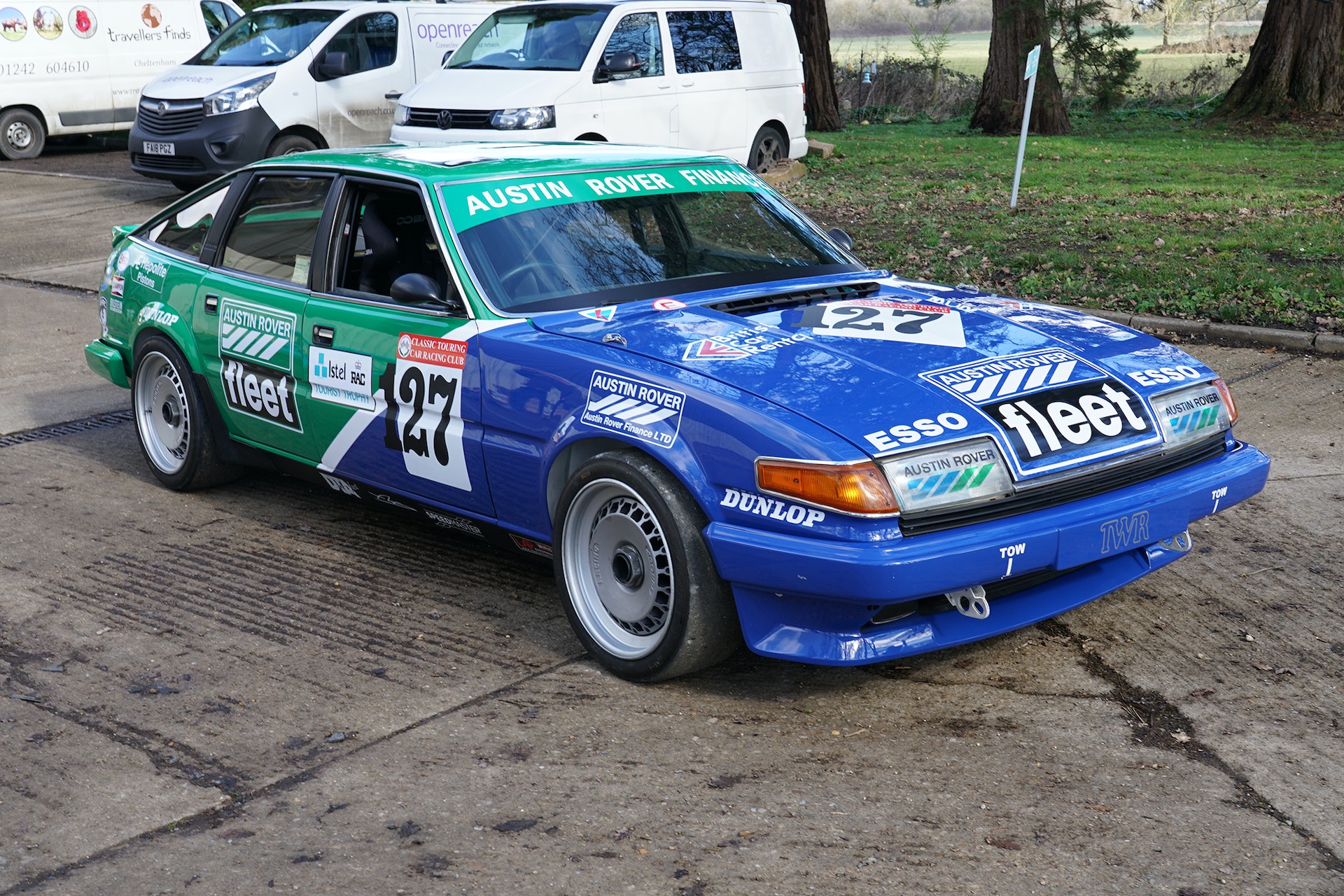 This Rover Vitesse to Group A specification is a thrilling touring car, built by the masters of the craft, and boasting original TWR parts including a works-prepared engine. It is an ideal candidate for racing in Motor Racing Legends’ Historic Touring Car Challenge series, Peter Auto’s Heritage Touring Cup, and numerous other prestigious events. The noise of the Rover V8 at full chat alone is arguably worth the price of admission, but the detailed execution of this build means it is surely an unmissable opportunity for a touring car fan with a competitive spirit.