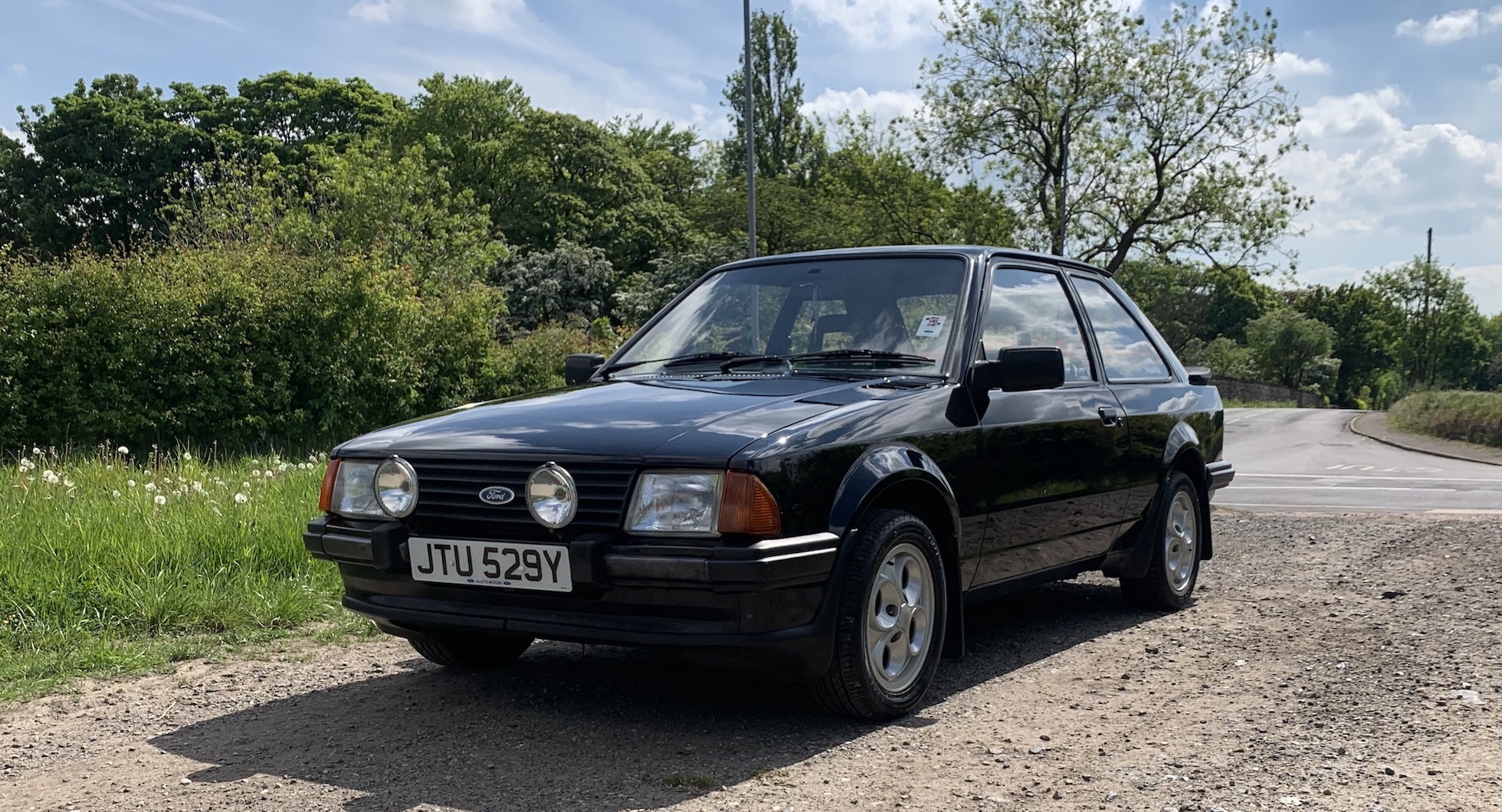 This Ford Escort XR3 is a highly original example of the marque’s 1980s rival to the VW Golf GTI, presented in good condition throughout. It is powered by the carburettor-fed 1.6-litre CVH engine producing 95bhp, coupled to a five-speed manual transmission. The odometer shows 76,490 miles from new. 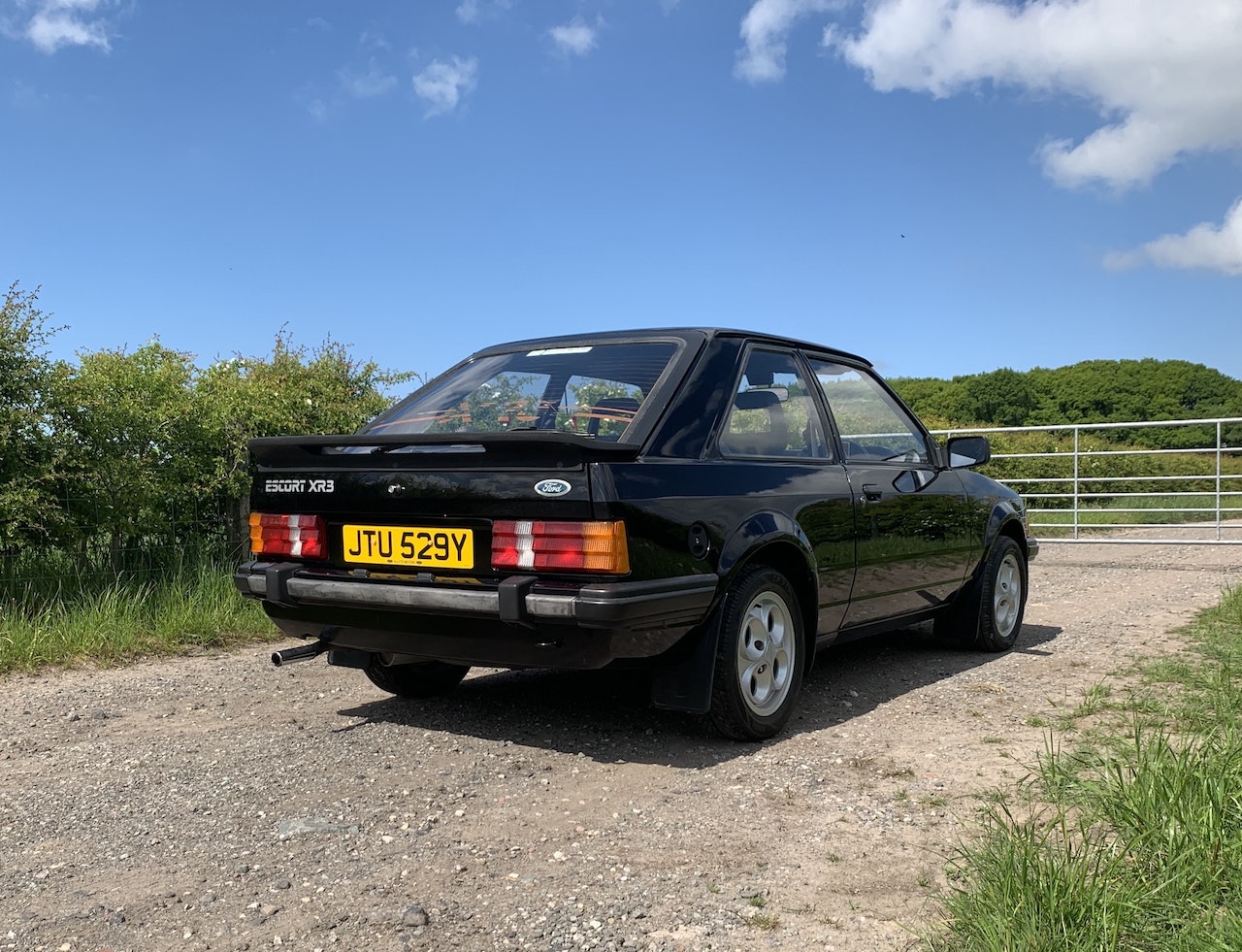 First registered in August 1982, the clear HPI report shows nine previous registered keepers - certainly not unusual for a popular fast Ford. This particular car has been recognised as being an unmolested example, and has starred on the ‘Wheeler Dealers’ TV show, as well as being driven by James May in his ‘Cars of the People’ series. The seller has owned the car for the last year, and is now offering it to another enthusiast to enjoy. 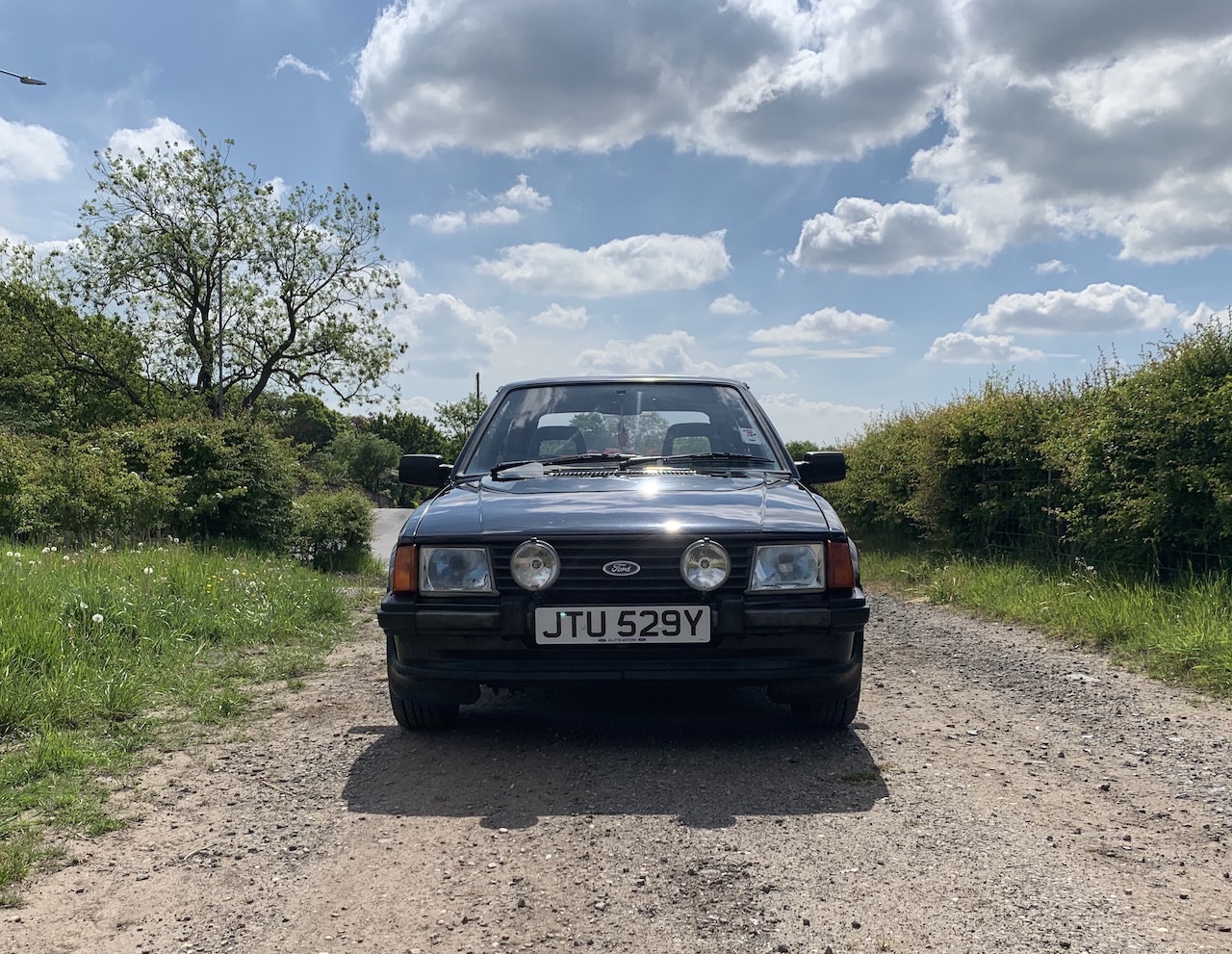 The body is described as being in very good condition. The shut lines and panel gaps all look good, and it remains original and unmodified throughout. As is to be expected from a car that is nearly 40 years old and which has never been restored, the plastic trims have faded, and the window and door rubbers appear aged in places. The rear window retains the original Allitts Motors dealer sticker, though the XR3 graphic has deteriorated over time. 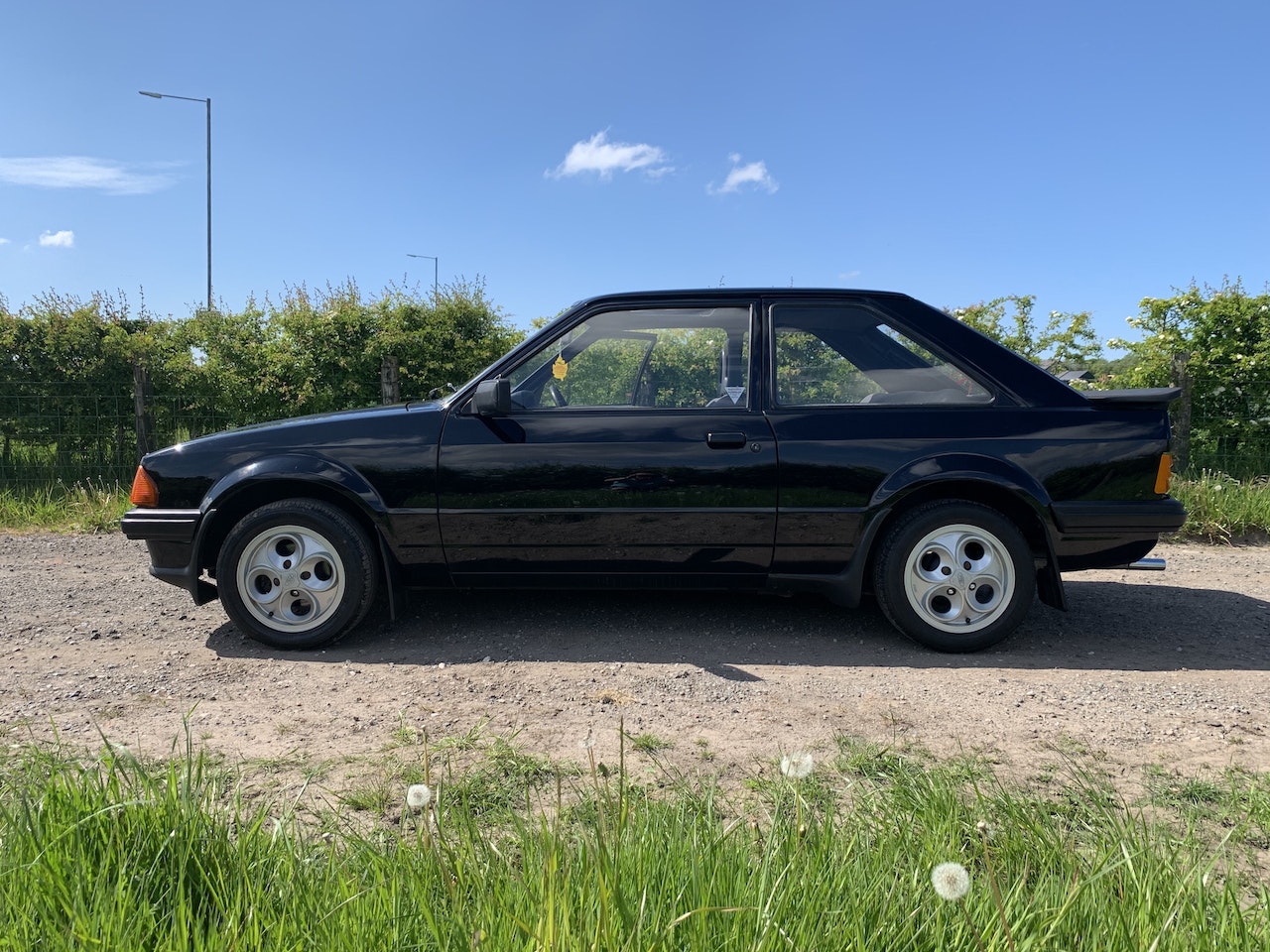 The seller states that there are a few marks around the body, and some rust on the sunroof, but nothing that detracts from the overall impressive appearance. Even the number plates appear to be original. It rides on a correct set of 14-inch ‘clover leaf’ alloy wheels, which have evidently never been refurbished, and do have some scuffs and tarnishing of the finish. 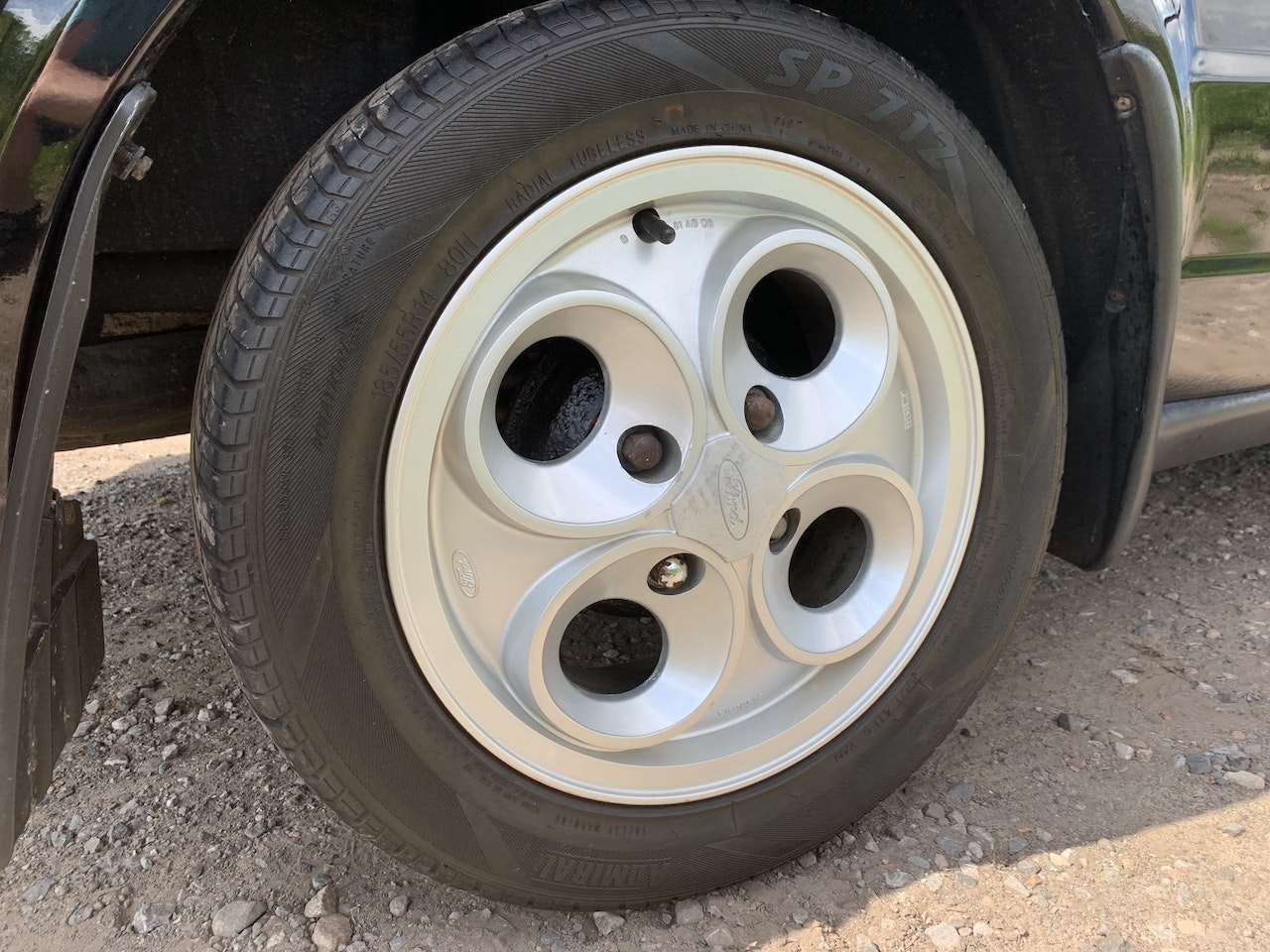 Inside, the original interior presents well for its age and mileage, and has never been re-trimmed. The factory-fitted steering wheel and gear knob are still in place, and it even retains the original Ford radio and cassette player. The black cloth upholstery has faded over time, with some visible wear on the seat bolsters, and the odd mark. One or two parts of the plastic dashboard seem to have warped very slightly with age. 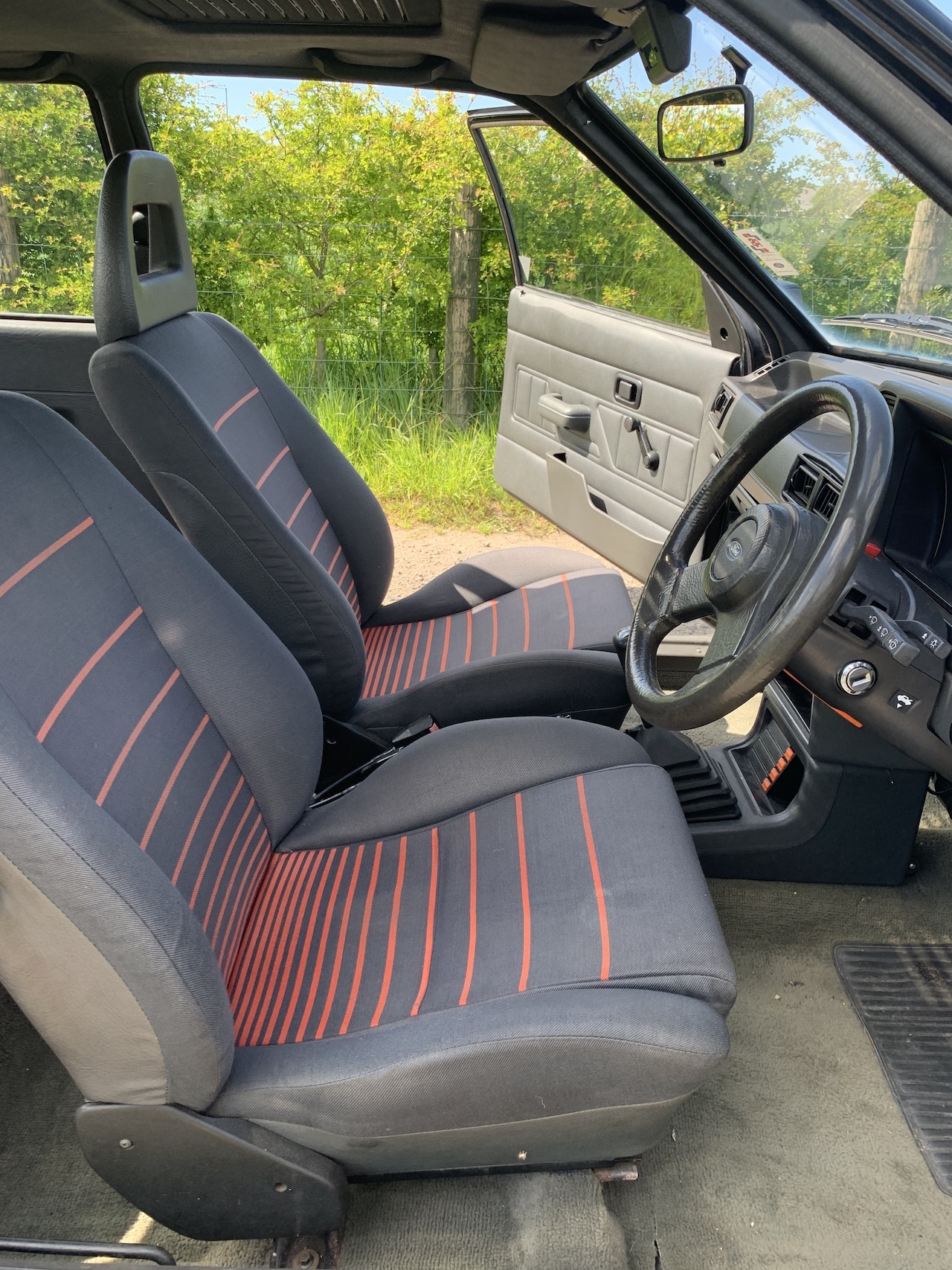 There are scuffs on sections of the carpet, and it has worn down in the higher-use areas around the foot wells. Its sliding sunroof and sun shade both work as they should, and there are no known faults with any of the switchgear. At the back of the car, the parcel shelf has escaped the common modification for additional speakers, and remains intact. The boot lining is in good order, and a spare wheel is securely stored under the floor. 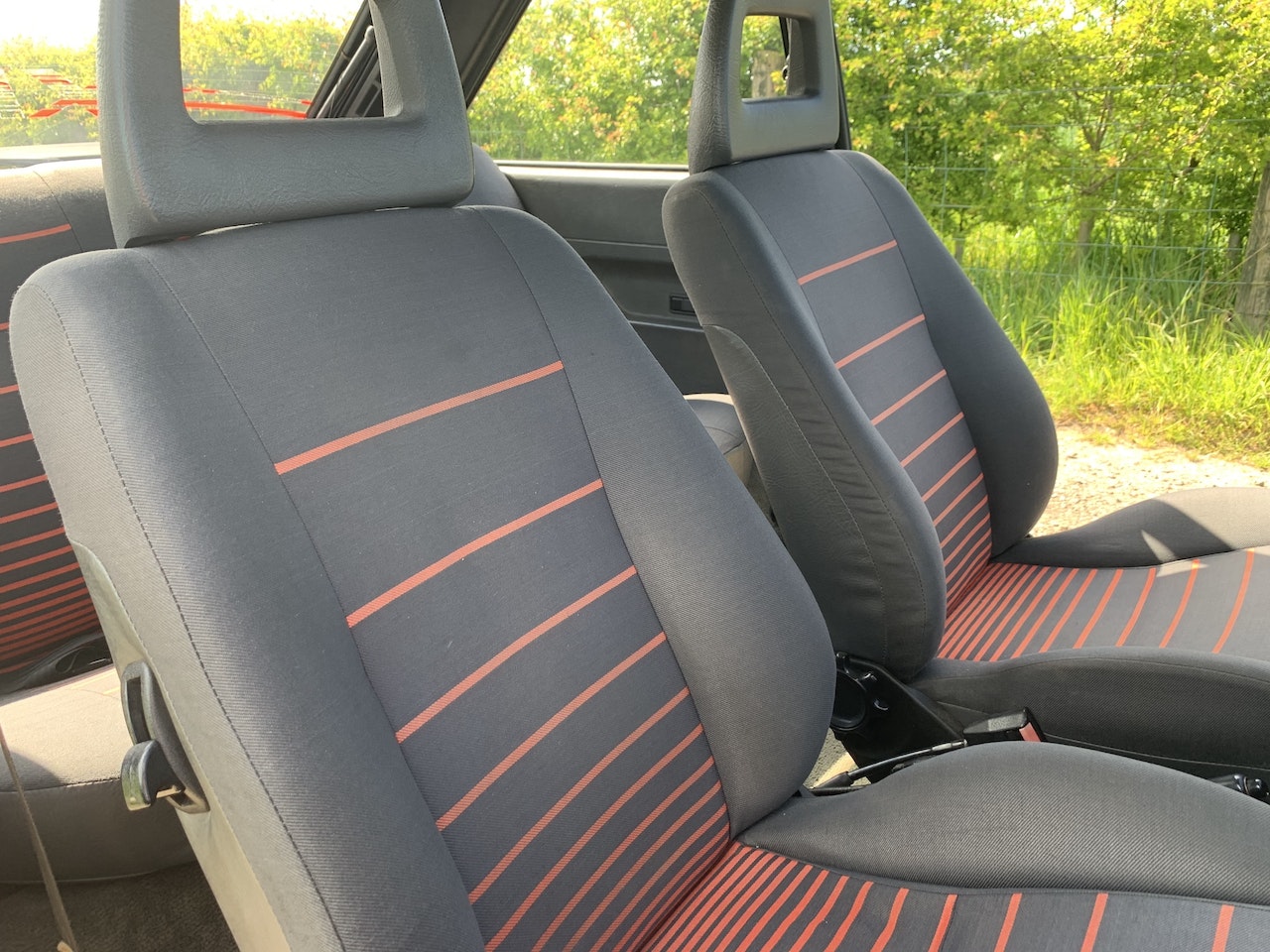 The most recent MOT test was on 31 July 2019 at 76,371 miles, which resulted in a first-time pass with no advisories whatsoever. A look back over the online MOT history for the last 14 years shows there are no notes about corrosion on the body or chassis frame at all, which is a very good indicator of its structural condition. 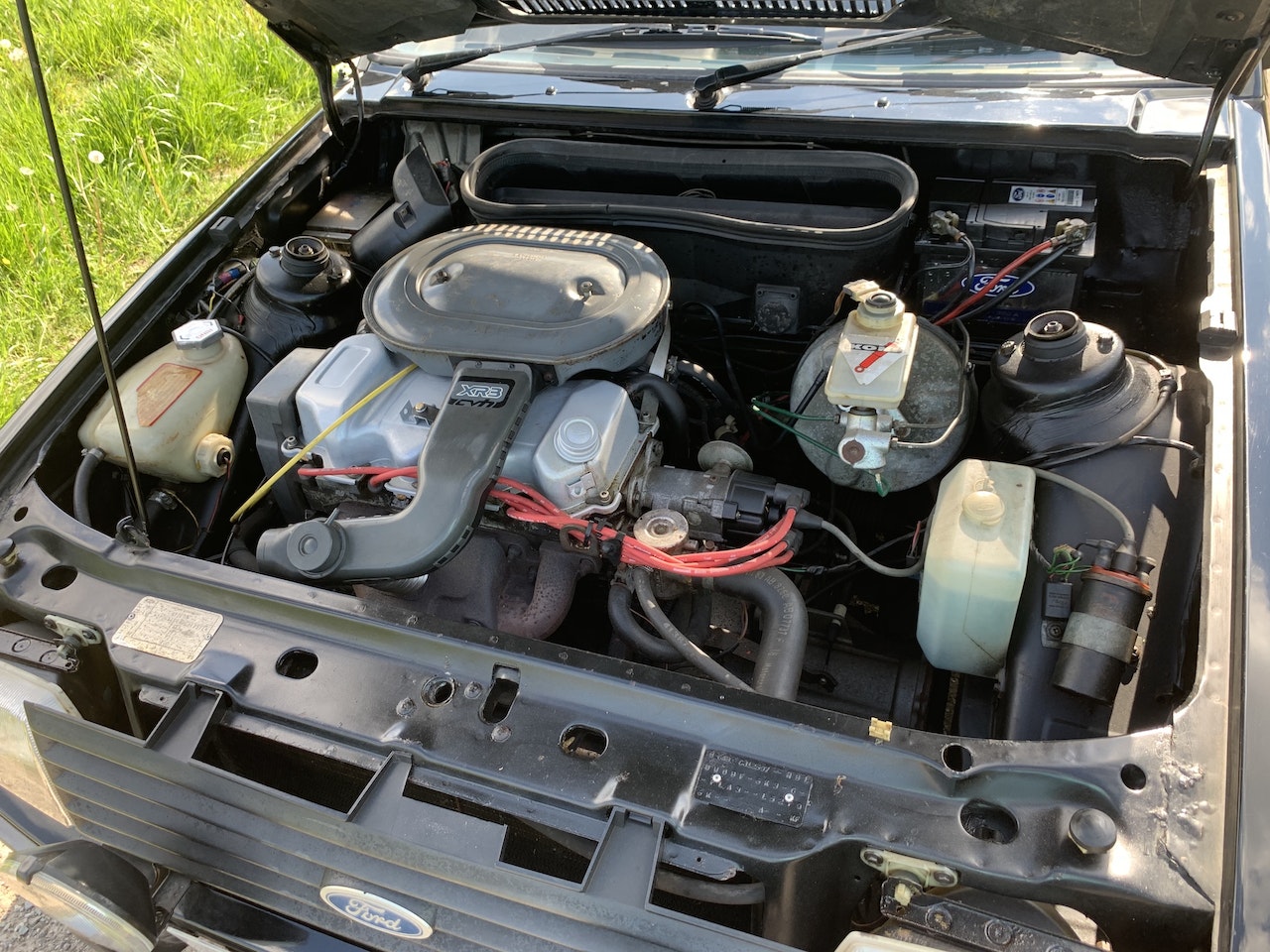 As the car has been preserved and driven sparingly in recent years, it would benefit from a fresh service if the next owner intends to put it into regular use. That said, the seller notes that it runs and drives brilliantly - and it certainly appears to perform well in the James May video clip as mentioned earlier. With few miles covered in the last year, the wheels are shod in budget tyres rather than splashing out on premium rubber, in size 185/55 R14 all round. 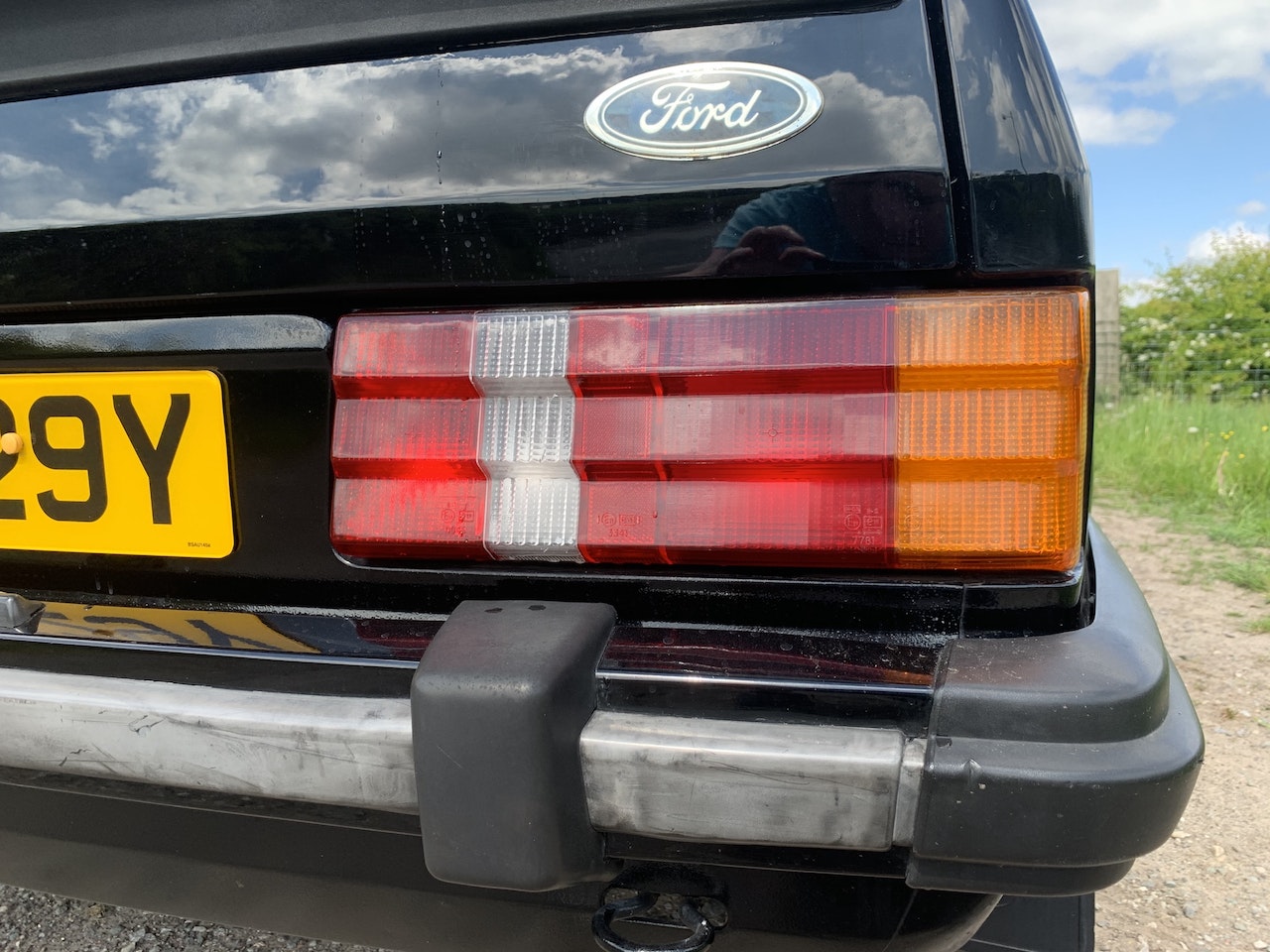 Accompanying the car are various original books, as well as a Haynes workshop manual for the model, and the Ford stereo user guide. A handful of old receipts and invoices are also included. 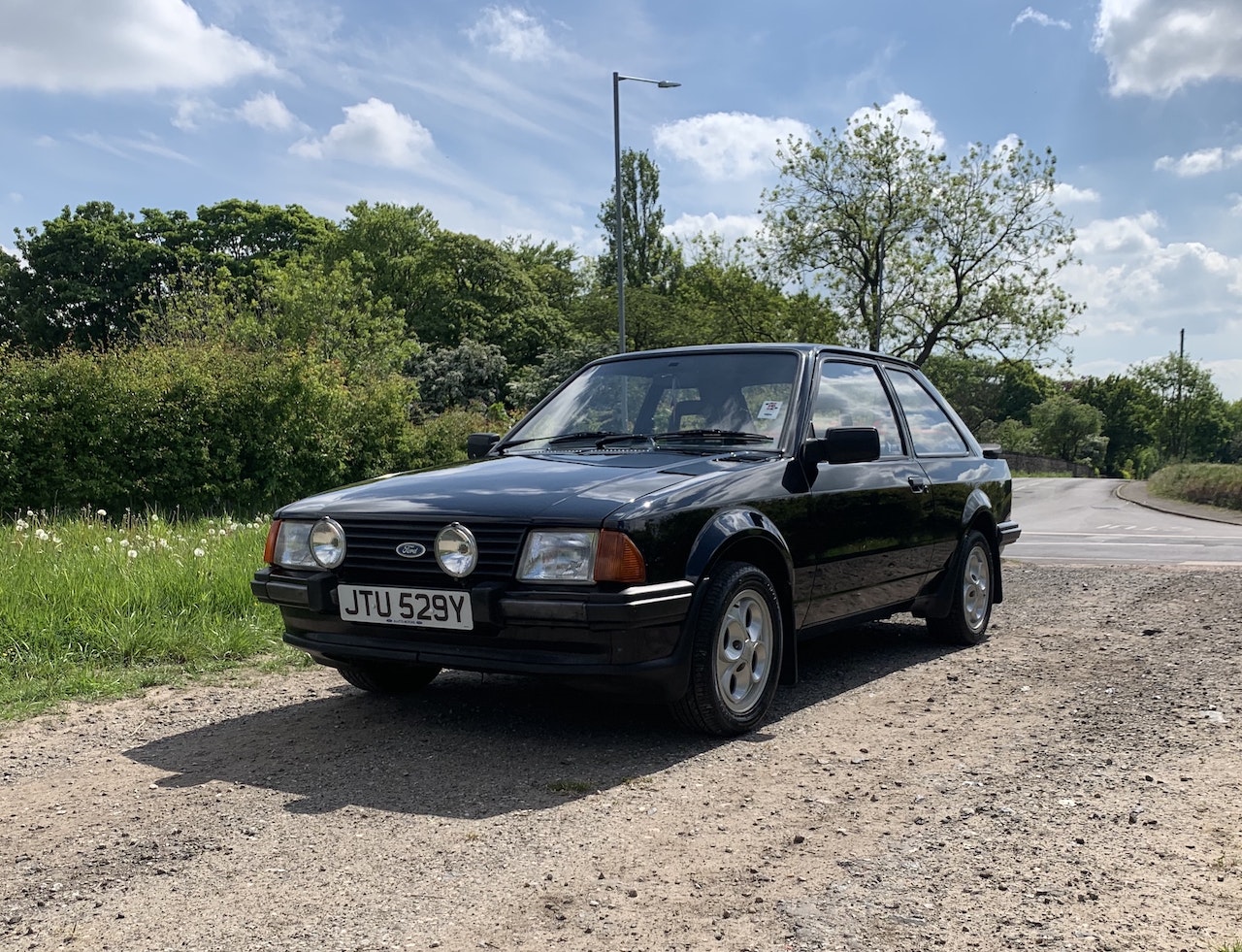 This Ford Escort XR3 is a sound example of a popular ‘everyman’ hot hatch from the 1980s. While the nameplate might not be as widely recognised as VW’s contender from the period, its pace and handling were rated highly. As Jeremy Clarkson quipped in his ‘Car Years’ TV series: “the only difference between the GTI and the XR3 was the people who bought them”. A proud Blue Oval and blue collar performance hero, which is in highly original condition, and would be a fun addition to any collection.