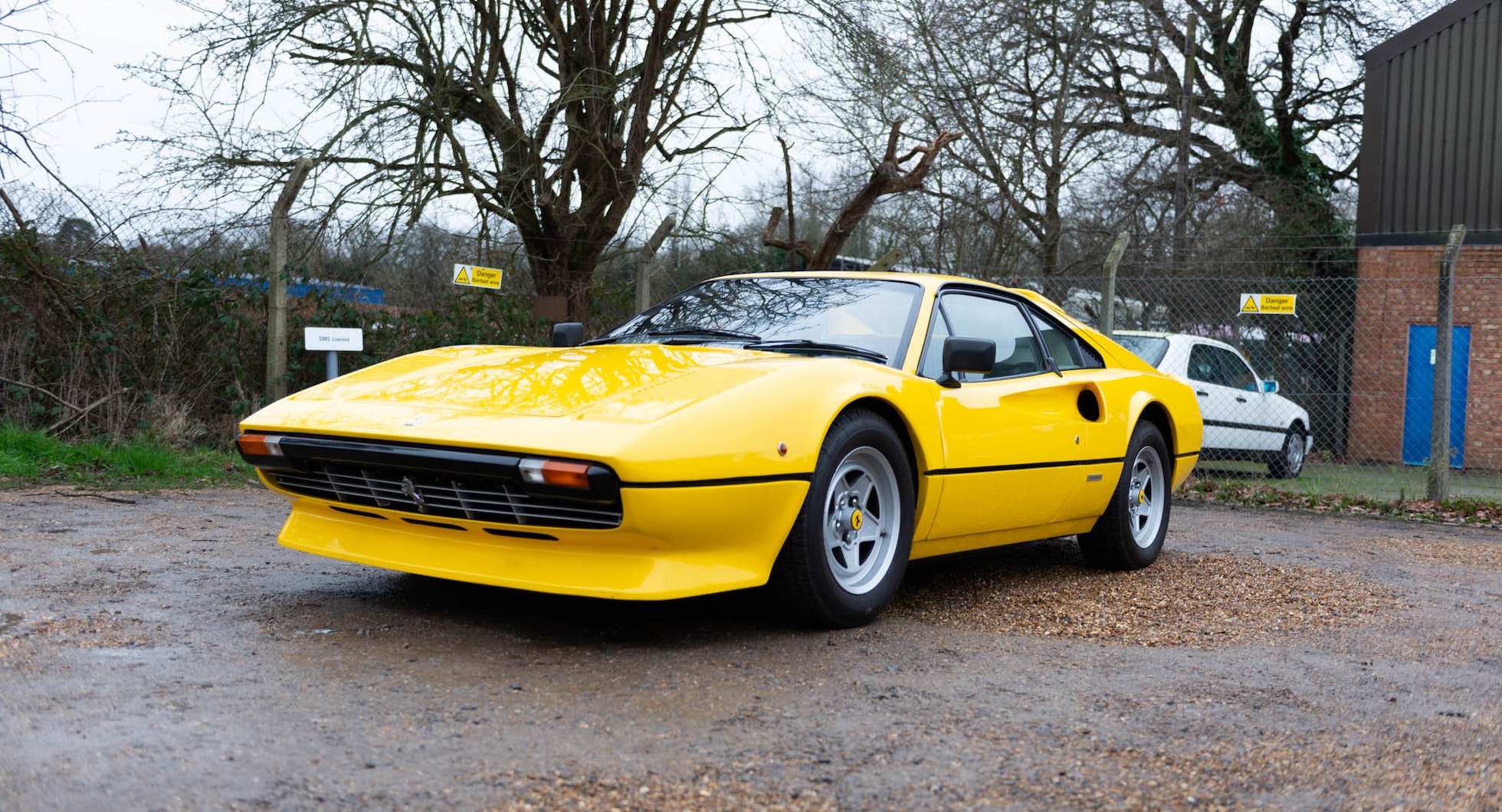 This 1981 Ferrari 308 GTBi is an eye-catching Prancing Horse that has been mechanically restored over the years but would now benefit from sympathetic refurbishment of its interior, as well as some remedial paintwork. It is powered by the 2.9-litre DOHC V8 engine with Bosch K-Jetronic mechanical fuel injection, producing 211bhp that is driven through the rear wheels via a five-speed manual transmission. The odometer shows just 20,238 miles; although, the accurate mileage from new is 35,279 miles (due to an odometer change at 15,041 miles in September 1989). The car is currently under a SORN certificate and will require a fresh MOT before taking to the road. 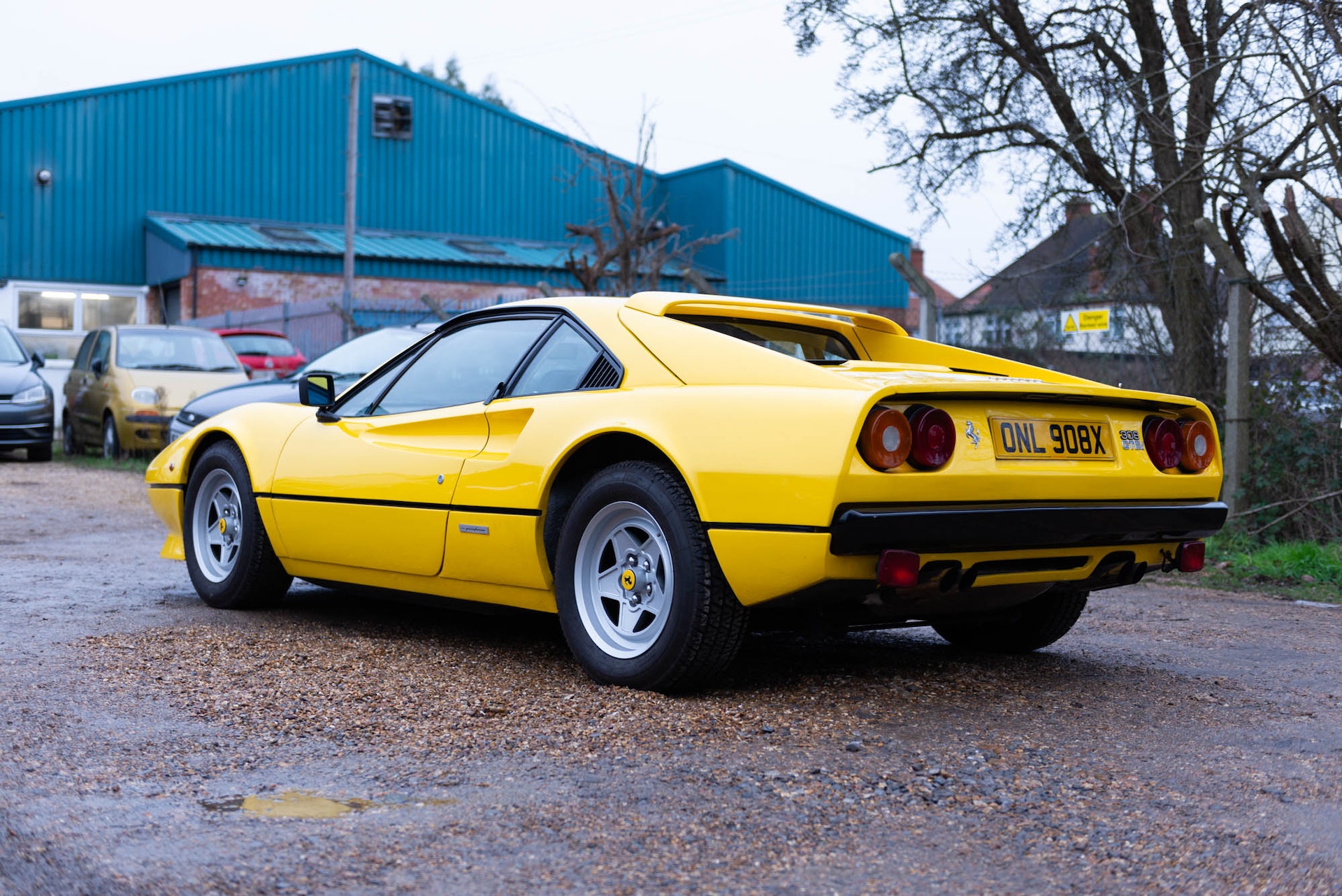 An original right-hand drive example — and one of just 42 308 GTBi models delivered to the UK — the car was first registered in August 1981. It has been owned by the vendor for nearly three years. 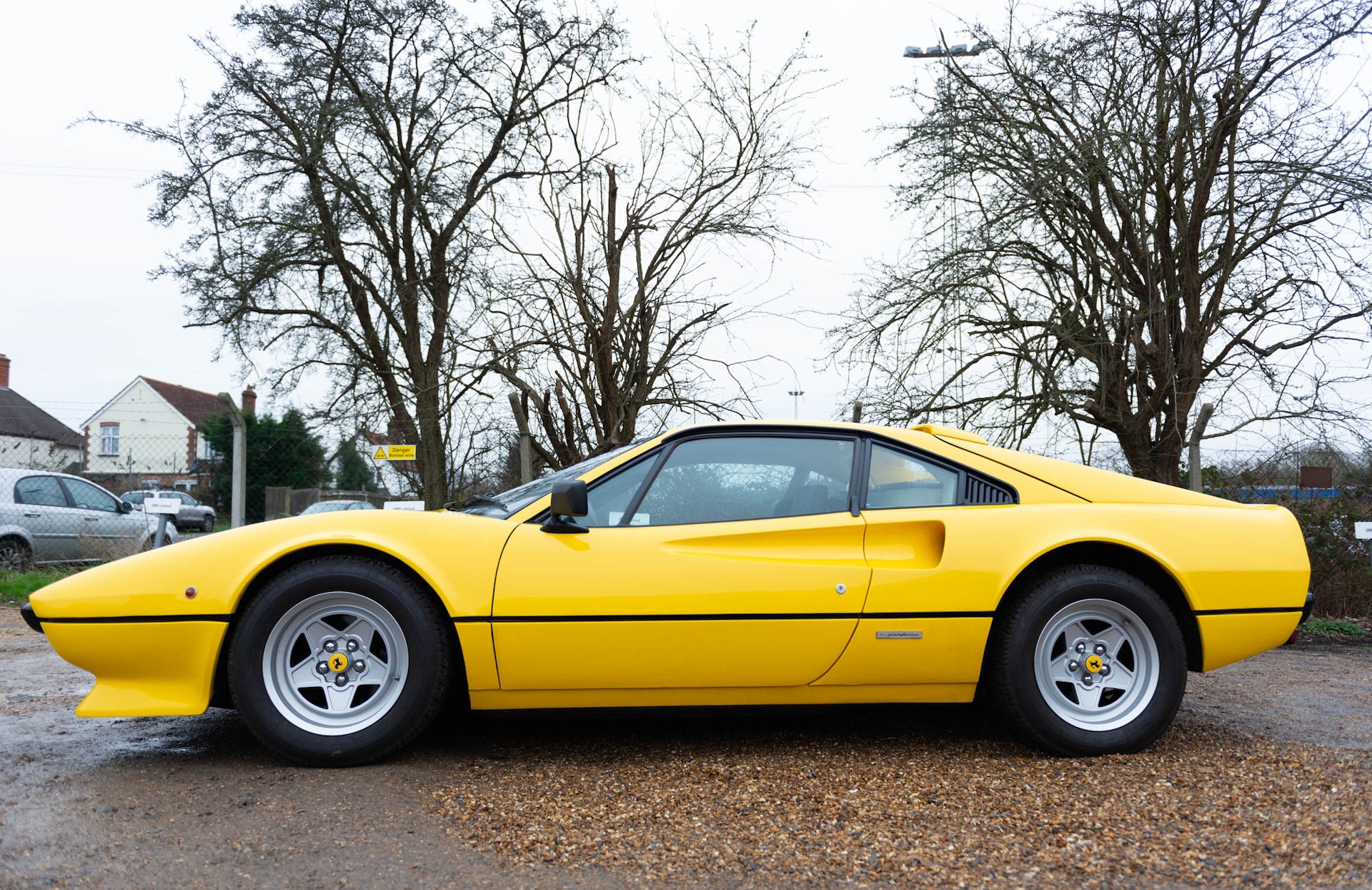 Its bodywork is in good condition, as is its paintwork, which was resprayed in 2015. There is a crack on the front bumper, a few stone chips on the nose, and some scratches and cracks on the bonnet. The door jambs and wheel arches show some paint peel and corrosion. On the rear, there are some paint chips on the bumper, as well as some minor dents, scratches and chips. 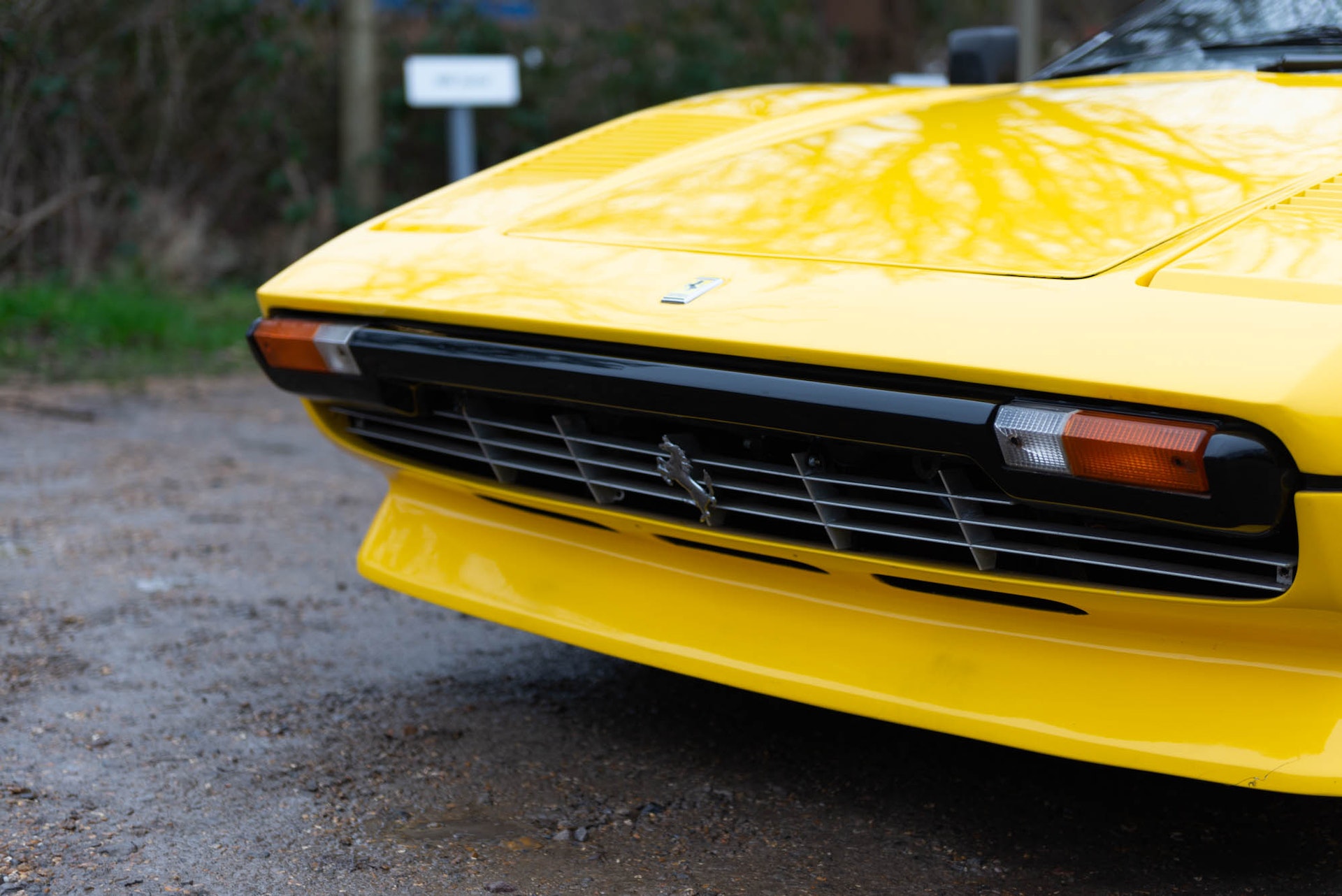 The car is fitted with the correct five-spoke alloy wheels — shod in a set of metric-size Michelin TRX 220/55 VR 390 radial tyres. The wheels look good, with no noticeable kerbing damage, and the tyres have plenty of tread. 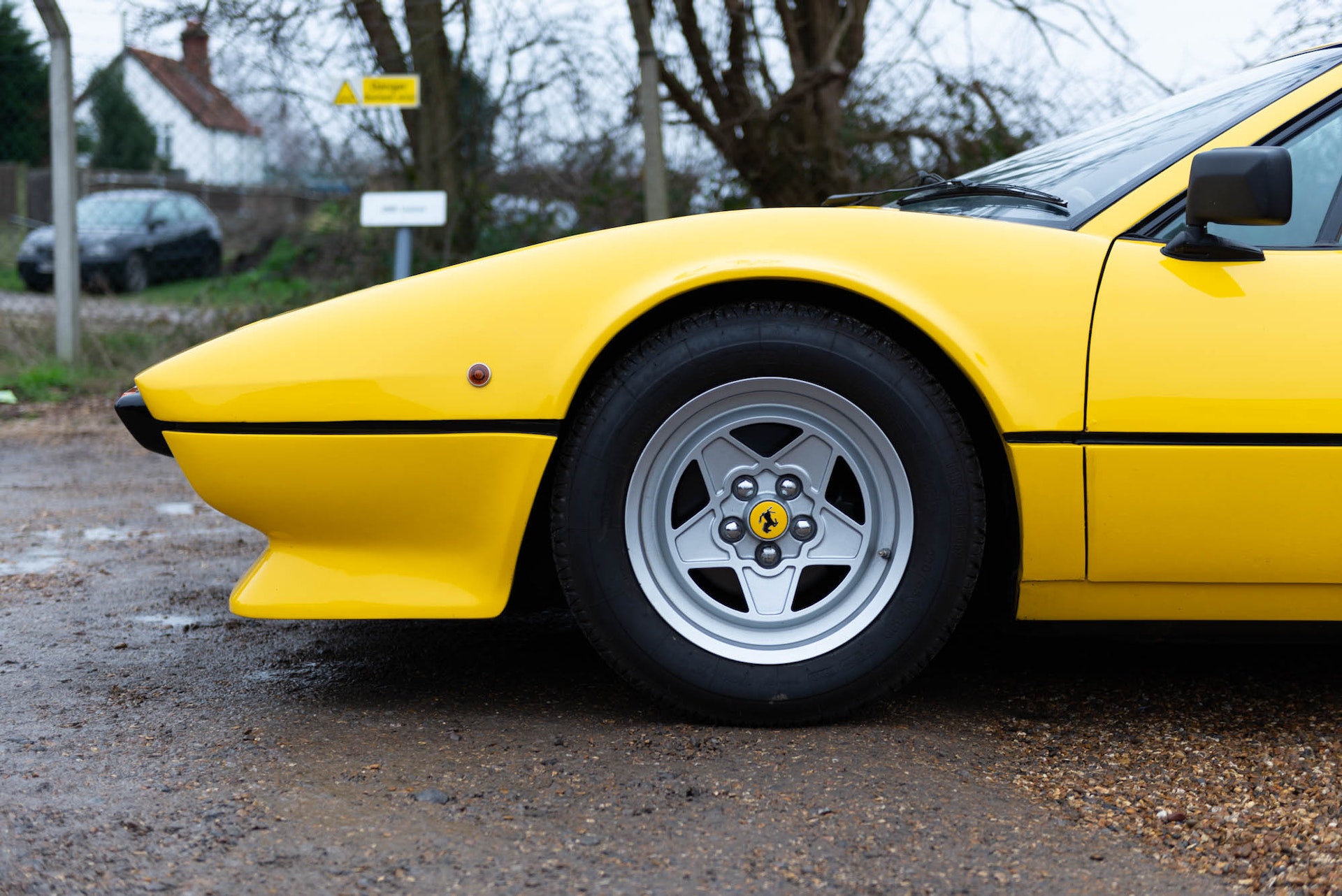 The interior has never been restored and, as such, is showing its age. There are scratches and discolouration on the seat bolsters and door cards. There is surface rust and some scratches on the kickplates, and the carpet has some holes, cuts and fraying. There are stains on the headliner and blemishes on the gear gate and ashtray. The clock and oil temperature gauge are clear. The original Nardi steering wheel is present and pleasingly patinated, and the Pioneer radio and cassette player is operational. 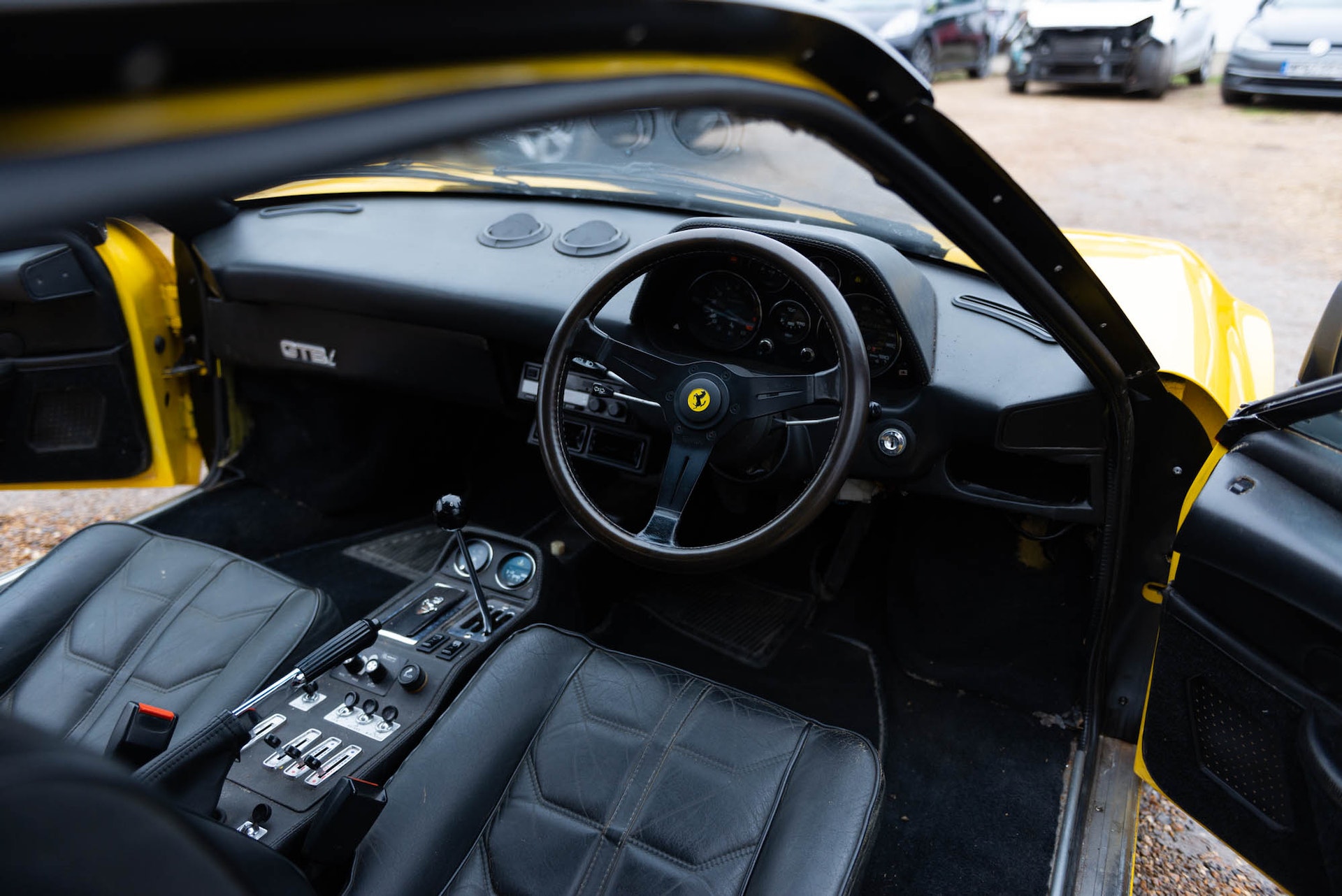 A partial restoration of the car was commissioned by its previous owner. Oxfordshire-based specialist SB Race Engineering performed the work in 2014 and 2015, which consisted of steam cleaning the engine and gearbox; stripping down, sandblasting, cleaning and painting/lacquering the cam covers and inlet manifold; and preparing the bodywork for paint. It is understood that the car was then partially resprayed in the Giallo Fly hue. 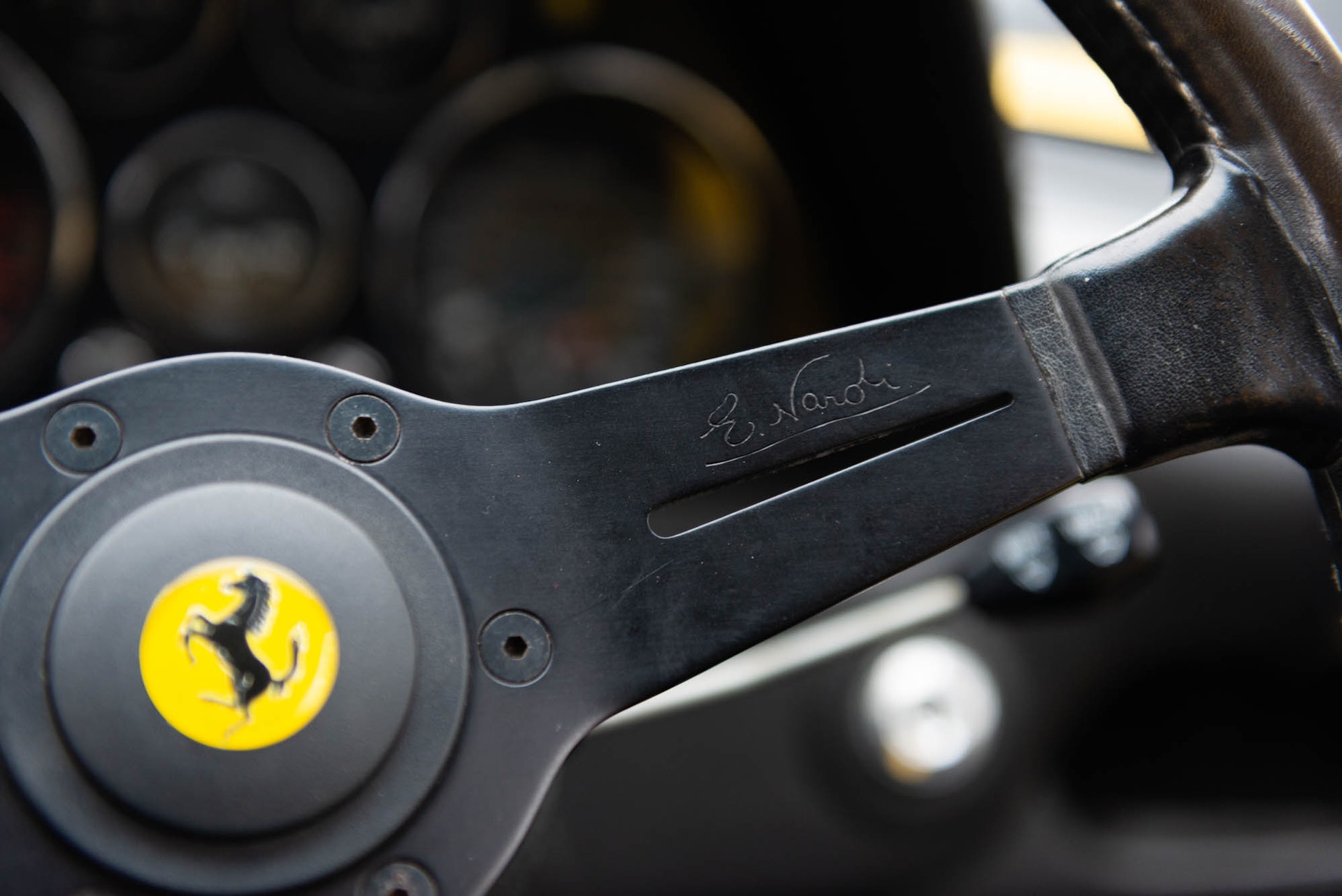 By the end of 2015 the car was returned to SB Race Engineering, where the car was reassembled after the paintwork, the engine was refitted, new exhaust manifolds and a new clutch were fitted, the window seals were replaced where needed, and an 18,000-mile service was performed. 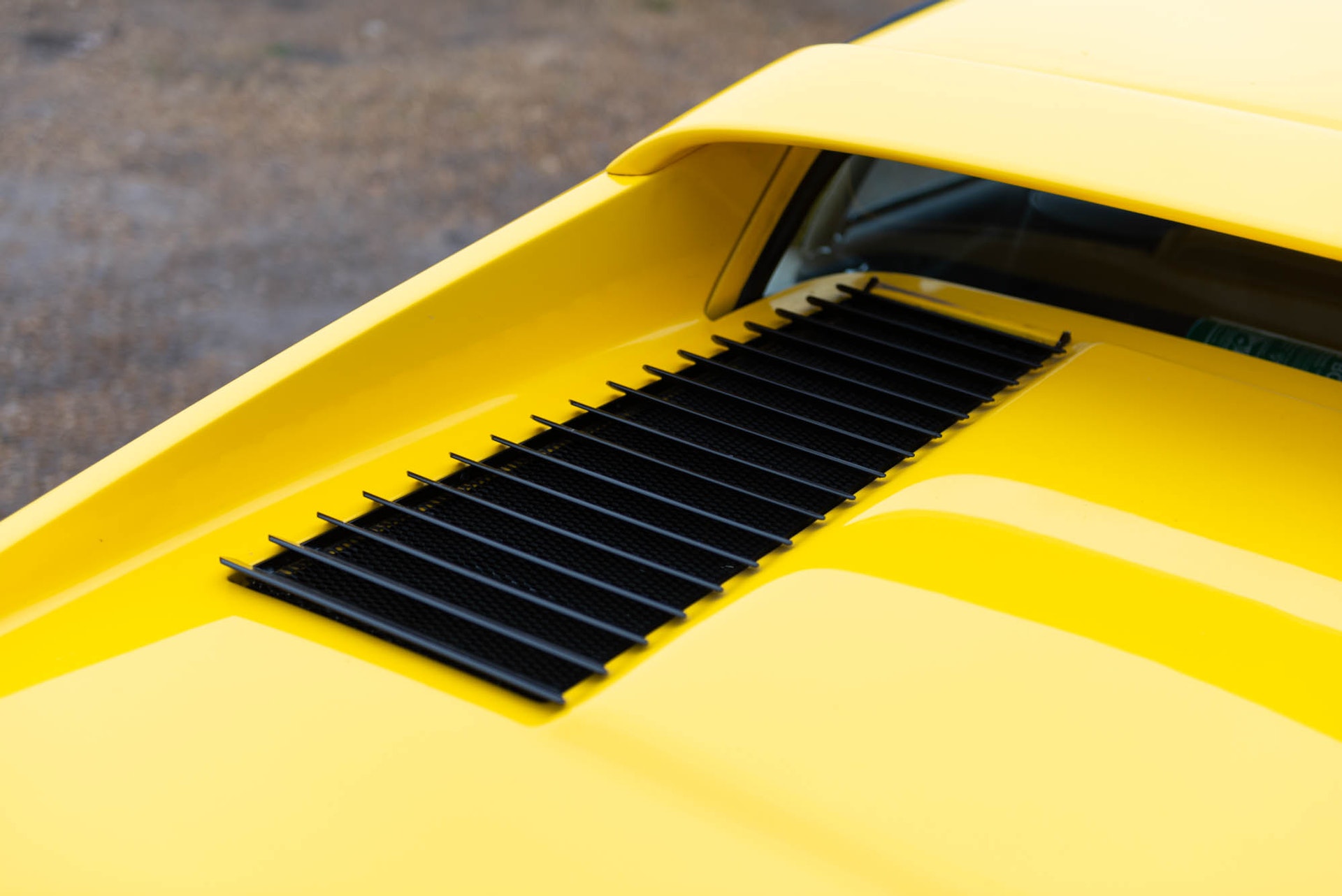 Its most recent MOT test was on 21 September 2016 at a corrected 35,184 miles, passing without any advisories or warnings. While it has been off the road since the end of 2017, the vendor has invested in a mechanical overhaul during that time. Over the last few years, he has spent the best part of £9,000 to ensure the car runs and drives superbly. At the end of 2017, a new brake master cylinder, brake servo unit and steering rack assembly were installed, sourced from parts specialist Superformance. 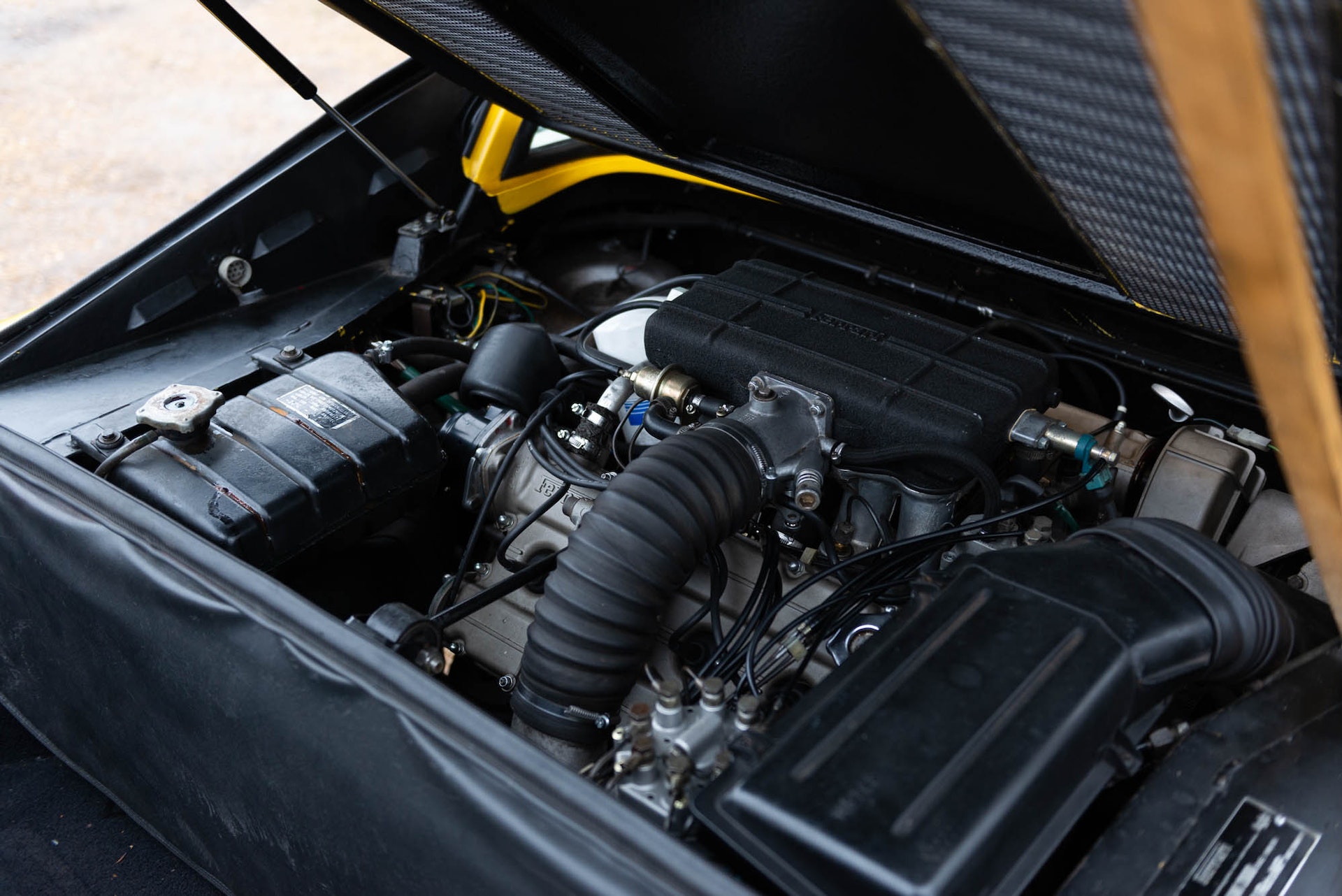 Just recently, in September 2019, Neal Lucas Sports Cars was entrusted to do an in-depth service, which included rebuilding and overhauling the fuel injection system, metering unit, and warmup regulator; cleaning and flushing all pipework and fuel tanks; stripping and cleaning the plenum chamber and inlet manifolds, and reassembling them with new gaskets and rubber manifolds; stripping the clutch assembly and replacing seals where needed; resetting the handbrake mechanism; adjusting the valve clearance; and replacing the cambelt, brake fluid and fuel filter. 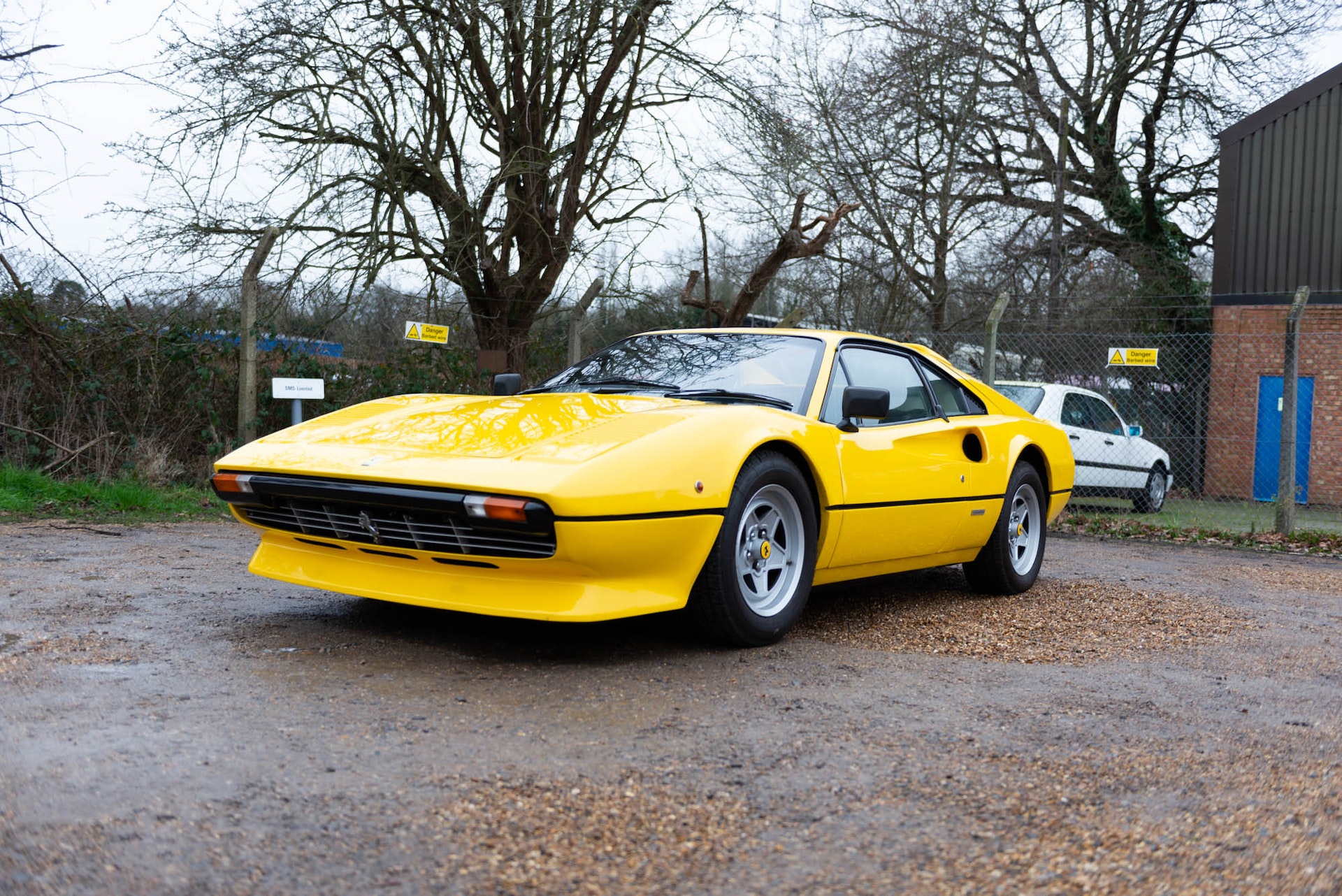 Accompanied by its original cloth-bound book wallet and manuals, this 1981 Ferrari 308 GTBi represents a great opportunity to purchase a genuine Prancing Horse that has been mechanically restored over the years, allowing its next owner to focus on a sympathetic restoration of the interior and small bodywork repairs. With its yellow-over-black colour combination, it’s a truly eye-catching example.