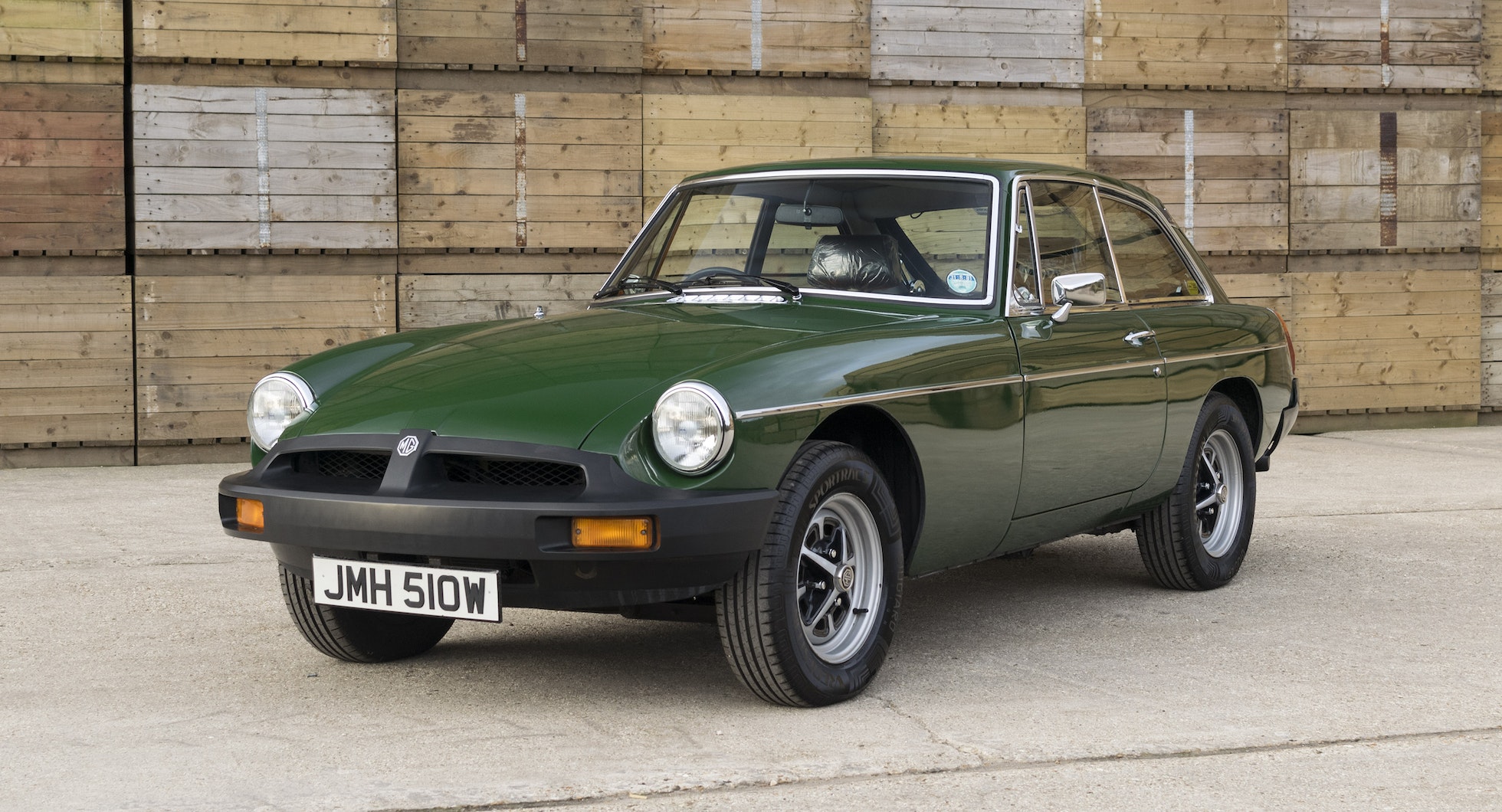 This MGB GT is a time-warp example of one of the most popular British classic cars, with remarkably low mileage from new, and presented in incredible original condition. It is powered by the 1.8-litre B-Series engine with twin SU carburettors, driven through the rear wheels via a four-speed manual transmission. The odometer shows just 1,669 miles from new. 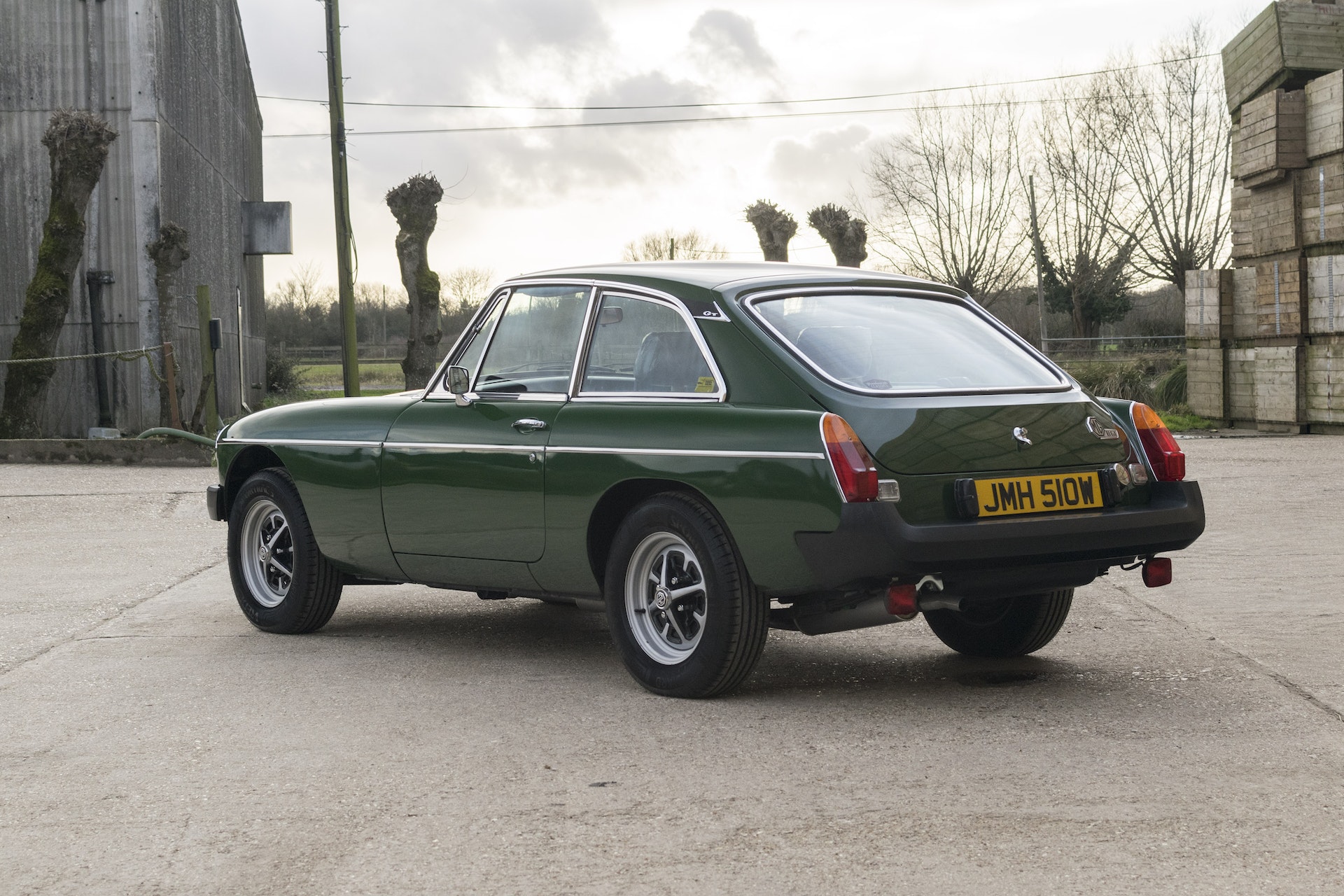 Originally ordered from and supplied by a dealer in Hackney, this MGB was first registered in September 1980. Believed to have been completed in the summer that year, this GT is among the last cars produced at the Abington factory before its closure in October 1980 - and this historical significance is the reason for its subsequent history. 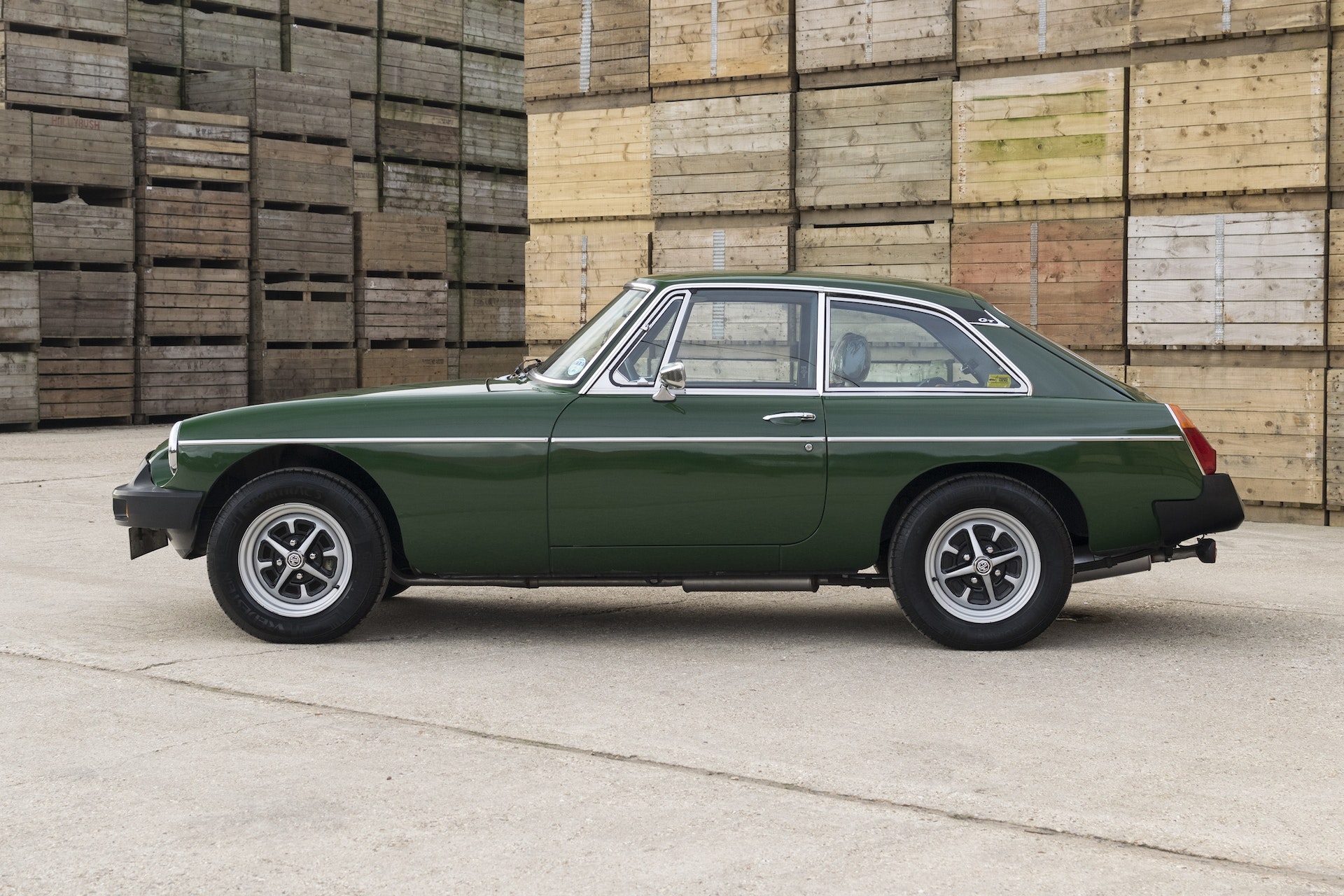 The car was treated to a comprehensive Protectol Rustproofing service when new, but rather than be put into regular service on the road, this MGB GT was kept as a collector’s item, cosseted in a garage. It was taken out rarely, perhaps only on special occasions or for events, and on 26 April 1982 it had its first service with just 984 miles on the odometer. 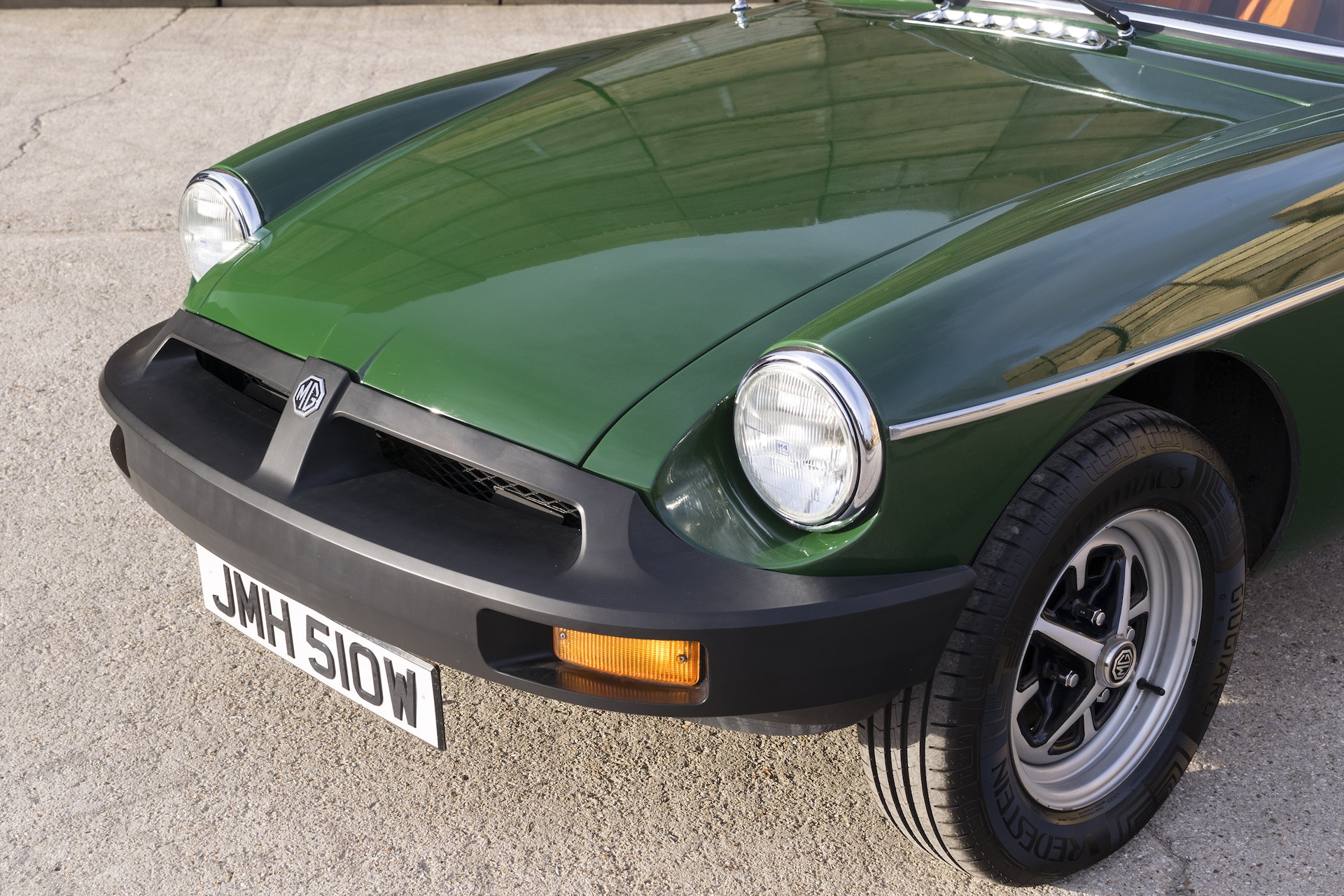 Having been kept garaged for more than three decades, this MGB GT has never needed paintwork, restoration, or even the replacement of significant components. Five years ago, the car was given a light recommissioning, with the carburettors overhauled and the spark plugs renewed. Its first ever MOT test was carried out in December 2014 at 1,348 miles. 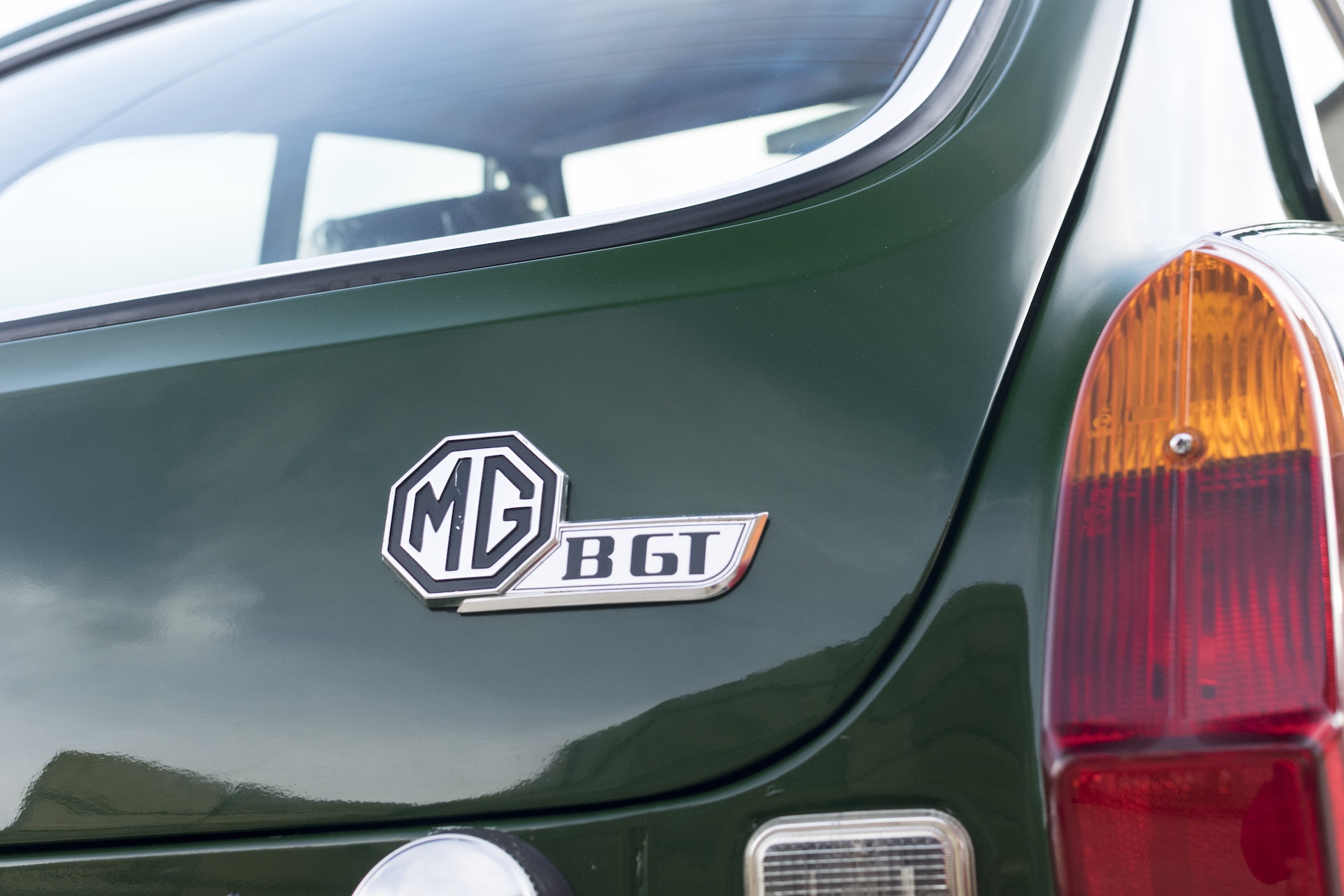 As you would expect, the bodywork on this MGB remains in superb condition. There are no dents, scratches or scuffs. The shut lines are excellent, and the door jambs, sills, and channels under the bonnet and boot are also in pristine order. It is finished in the very smart hue of Brooklands Green, and the paint is smooth and even around the car. 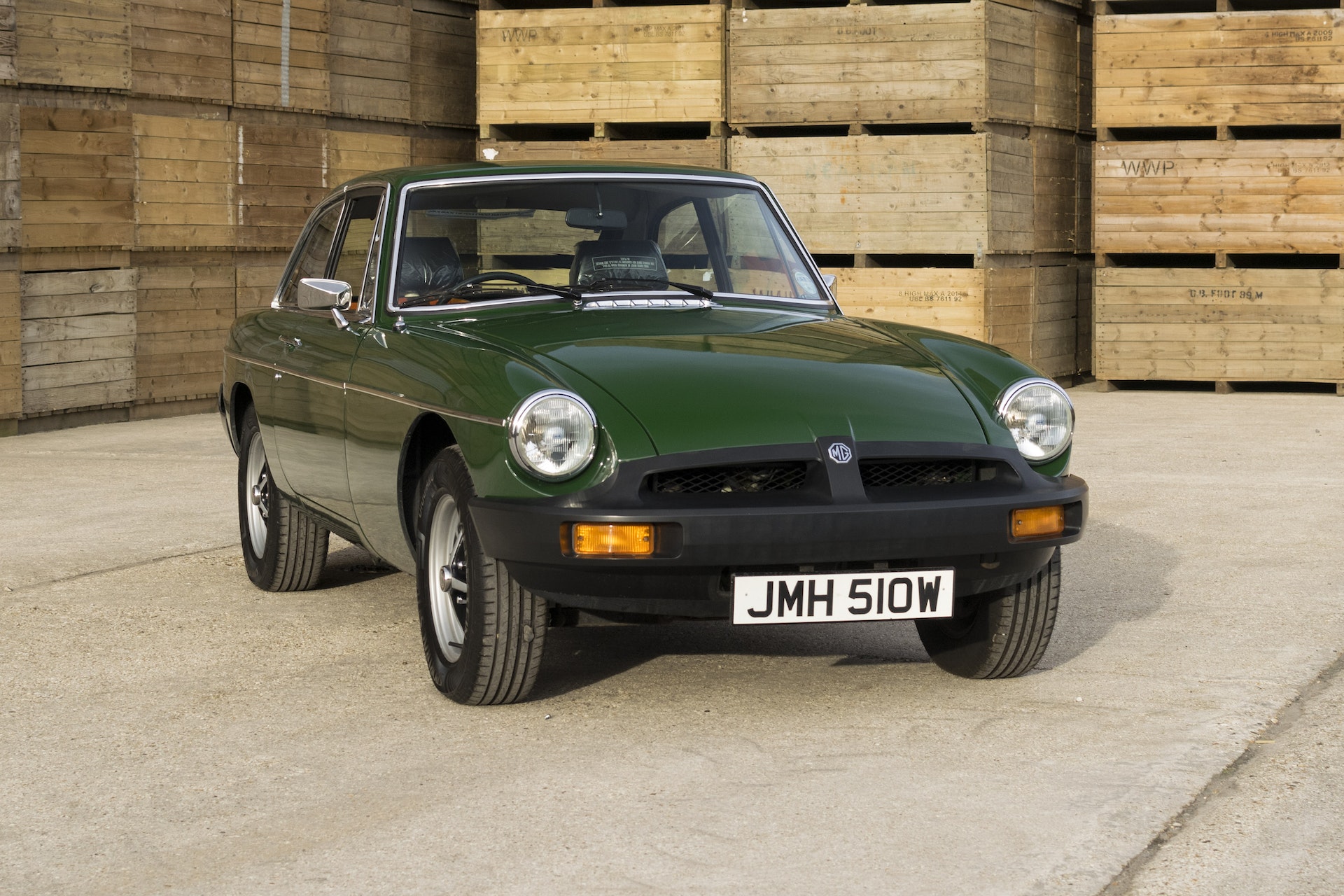 All of the chrome is in great shape, with no pitting or damage, and the light bezels house original Lucas lenses that are free of chips and cracks. The car rides on 14-inch pressed steel Rostyle wheels, which have a few small blemishes around the edges of the rims, but which are otherwise in very impressive condition. 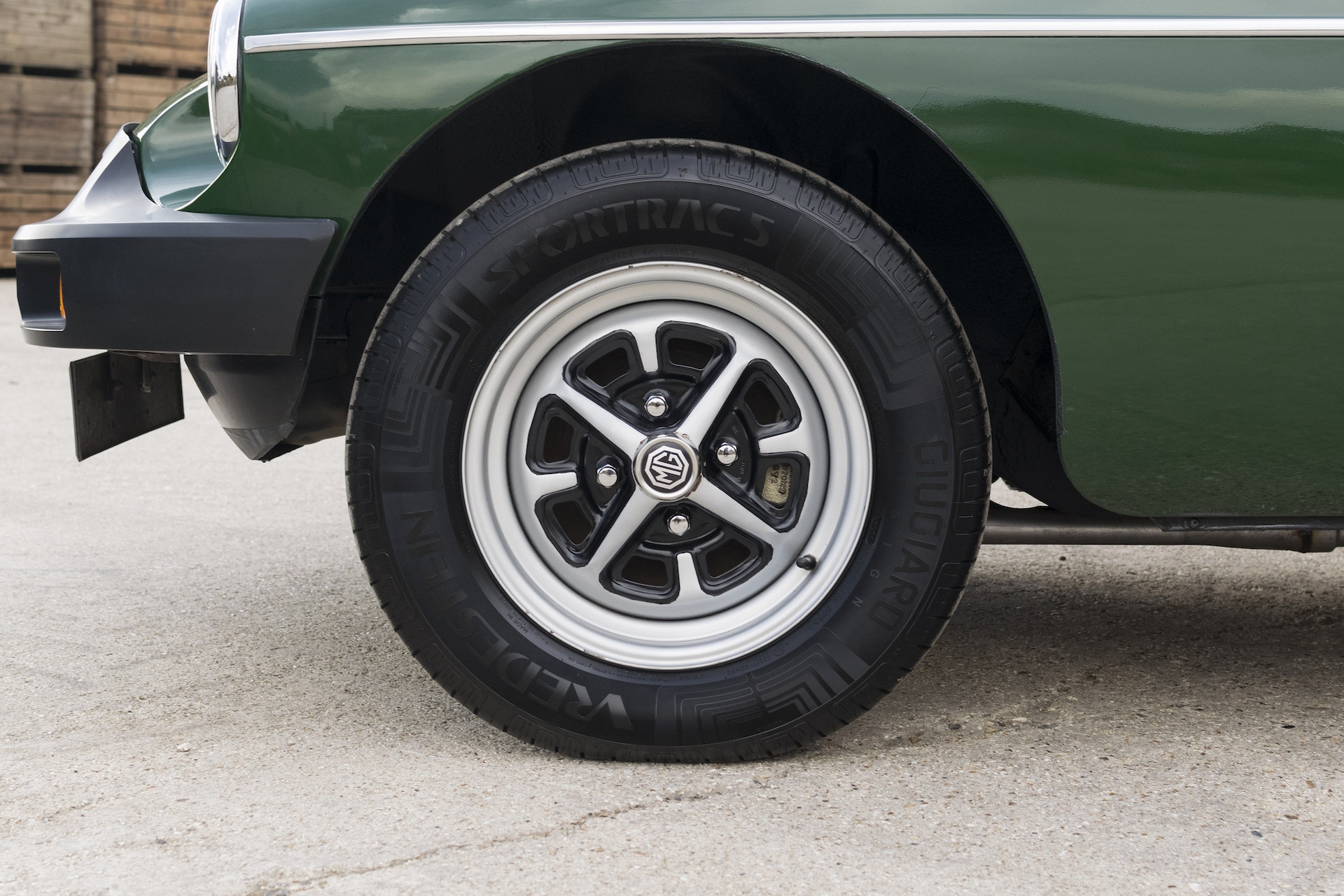 In the cabin, it sports the original orange and brown ‘deck chair’ striped cloth upholstery. It is a period-perfect match for the green exterior, and remains in outstanding, unworn condition. The black vinyl headrests even retain the original plastic protector covers. As you would expect, the headlining, door cards, and carpets are all in superb order. Being a late MGB GT, it features the four-spoke steering wheel, toggle rocker switches, and lights and wiper functions on the steering column stalks. The black crackle-finish dashboard is original and undamaged, and houses a charming Radiomobile 1160 stereo unit. 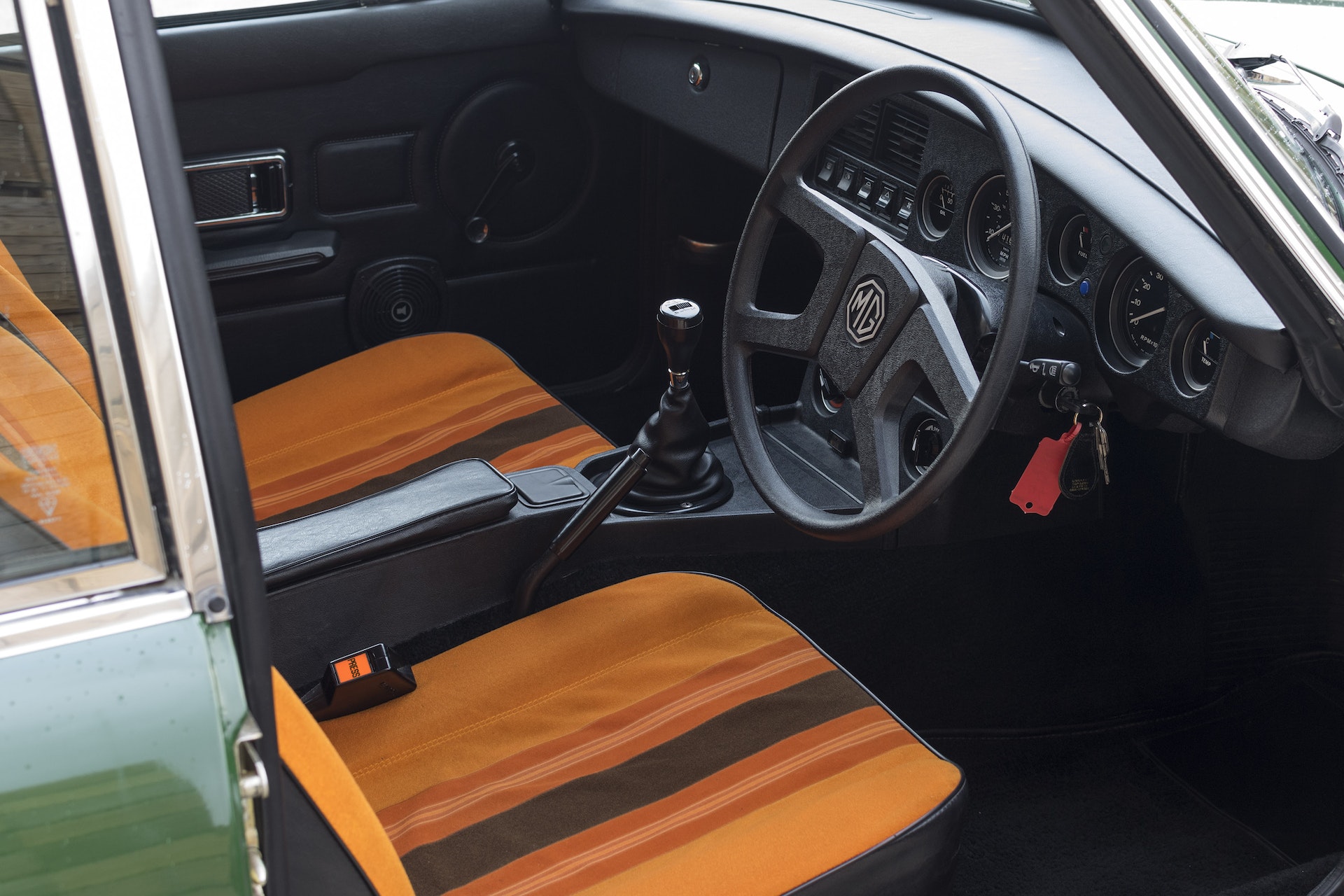 At the back of the car, the spring-loaded hatch stays are in perfect working condition, as are the release mechanisms for the rear seat bench, and the brackets for the rear quarter lights. The carpeted lining is all in good order, and under the boot floor is the full-size spare wheel and the original jacking kit. 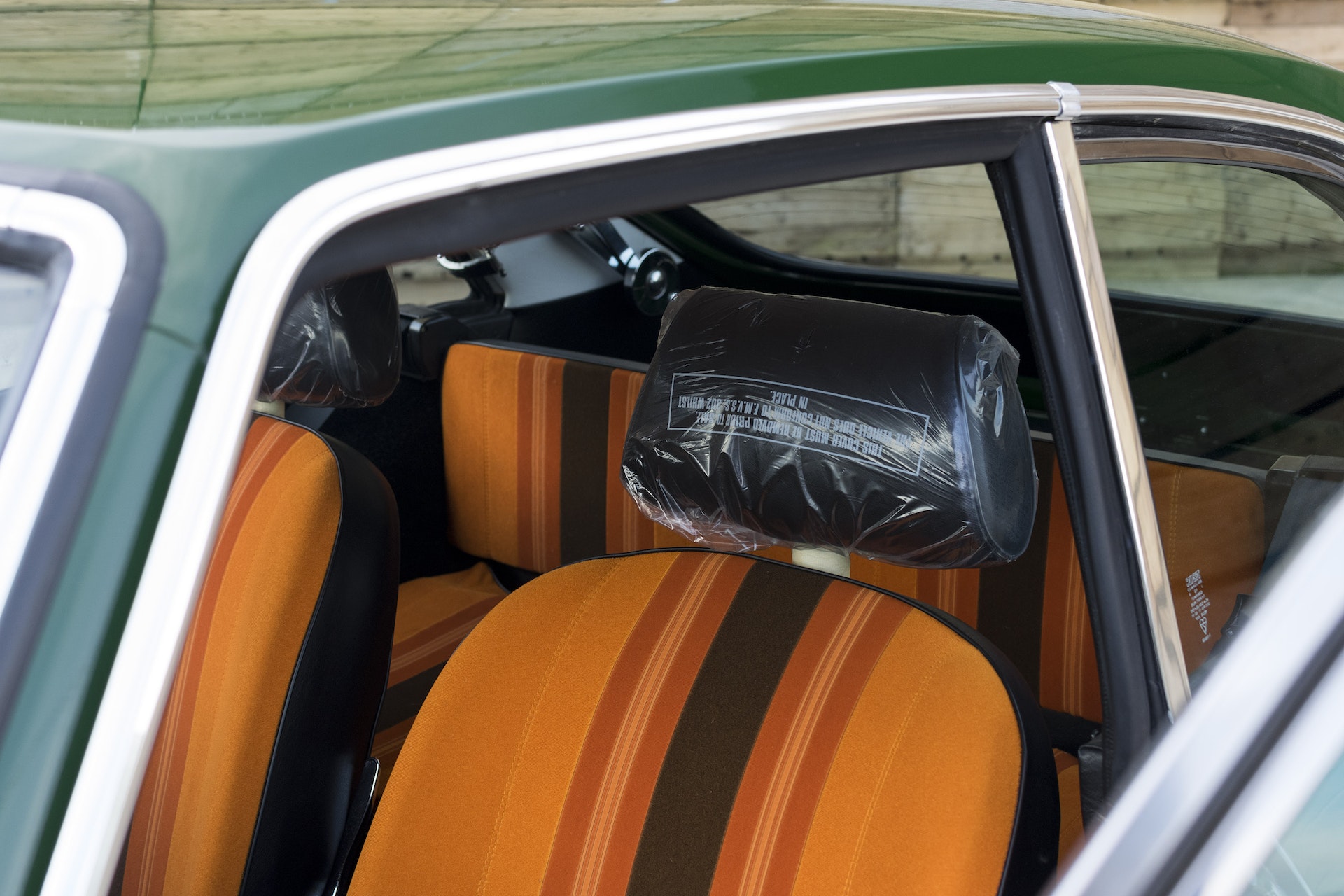 Having been recently recommissioned, this MGB GT is in sound running order. The car was driven a short distance from its secure storage unit to the area for the photoshoot location, and performed without fault. Lifting the engine bay reveals that the glue on the insulation material under the bonnet has deteriorated, and it simply needs to be re-stuck. Otherwise, the motor presents well, and starts on the button. 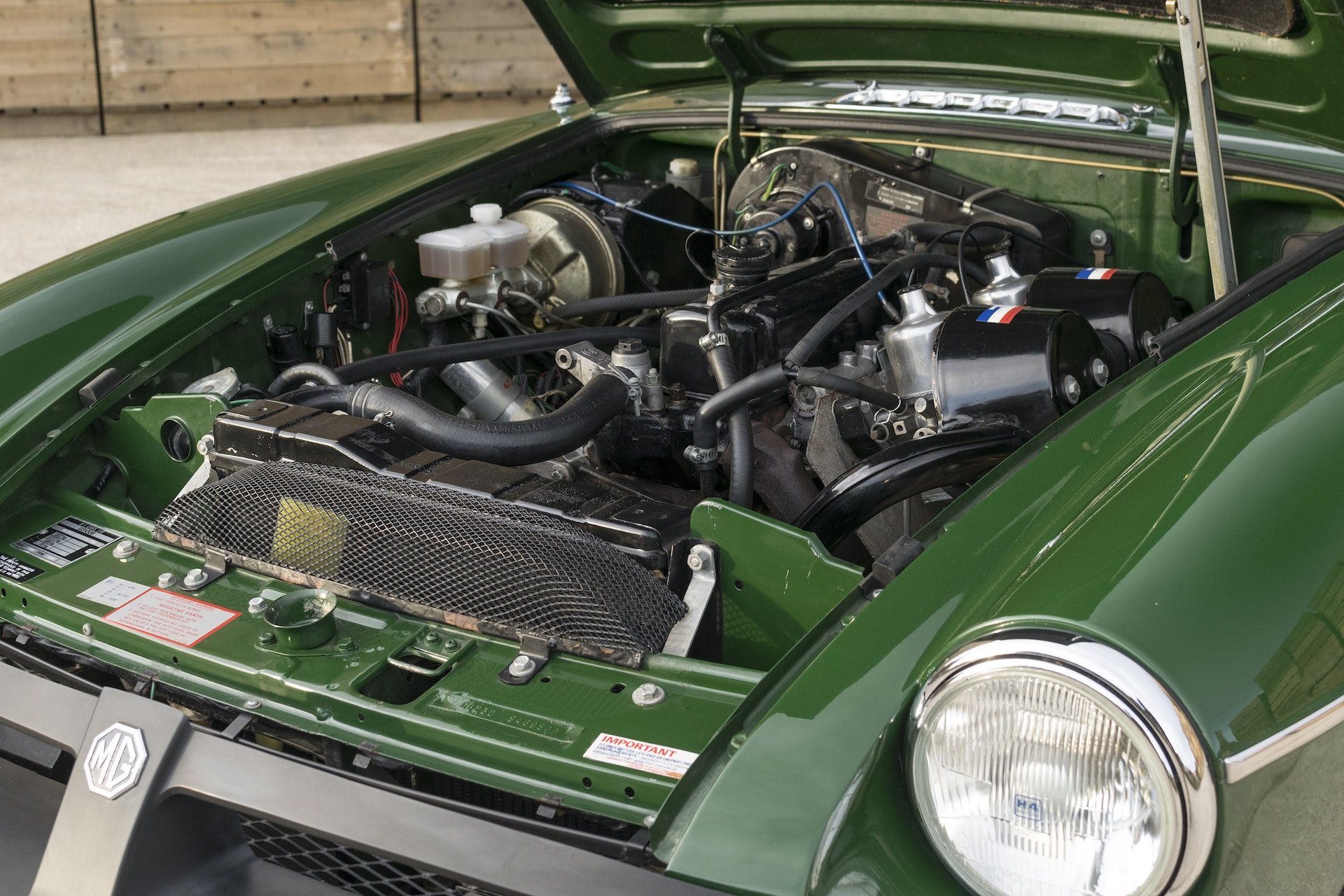 While the car has spent most of its life carefully preserved in a dry garage, it has covered some 320 miles over the last five years, proving its roadworthiness should the next owner desire to take it out on a sunny weekend. It was last put through an MOT test on 16 October 2018 at 1,668 miles, which resulted in a first-time pass with no advisories whatsoever. The wheels are fitted with a set of Vredestein Sportrac 5 tyres in size 185/70 R14 all round, which are date-coded to 2016 and are in as-new condition. 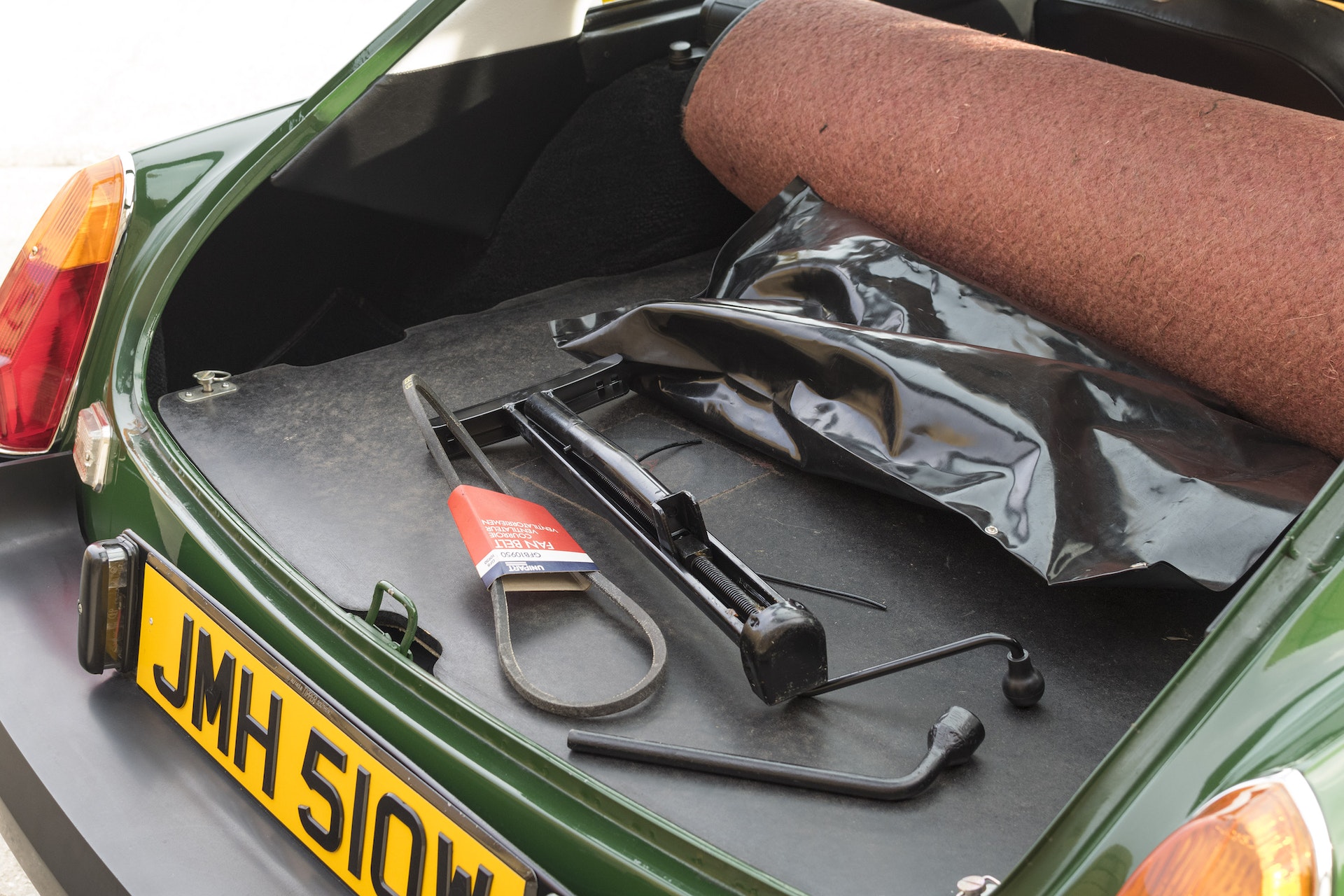 Accompanying this MGB GT is a the original driver’s handbook, as well as the original service book, showing the one and only stamp from 1982 at 984 miles. The deposit and sales invoices from 1980 both remain in the history file, along with information about temporary insurance and the receipt for the Protectol Rustproofing treatment. 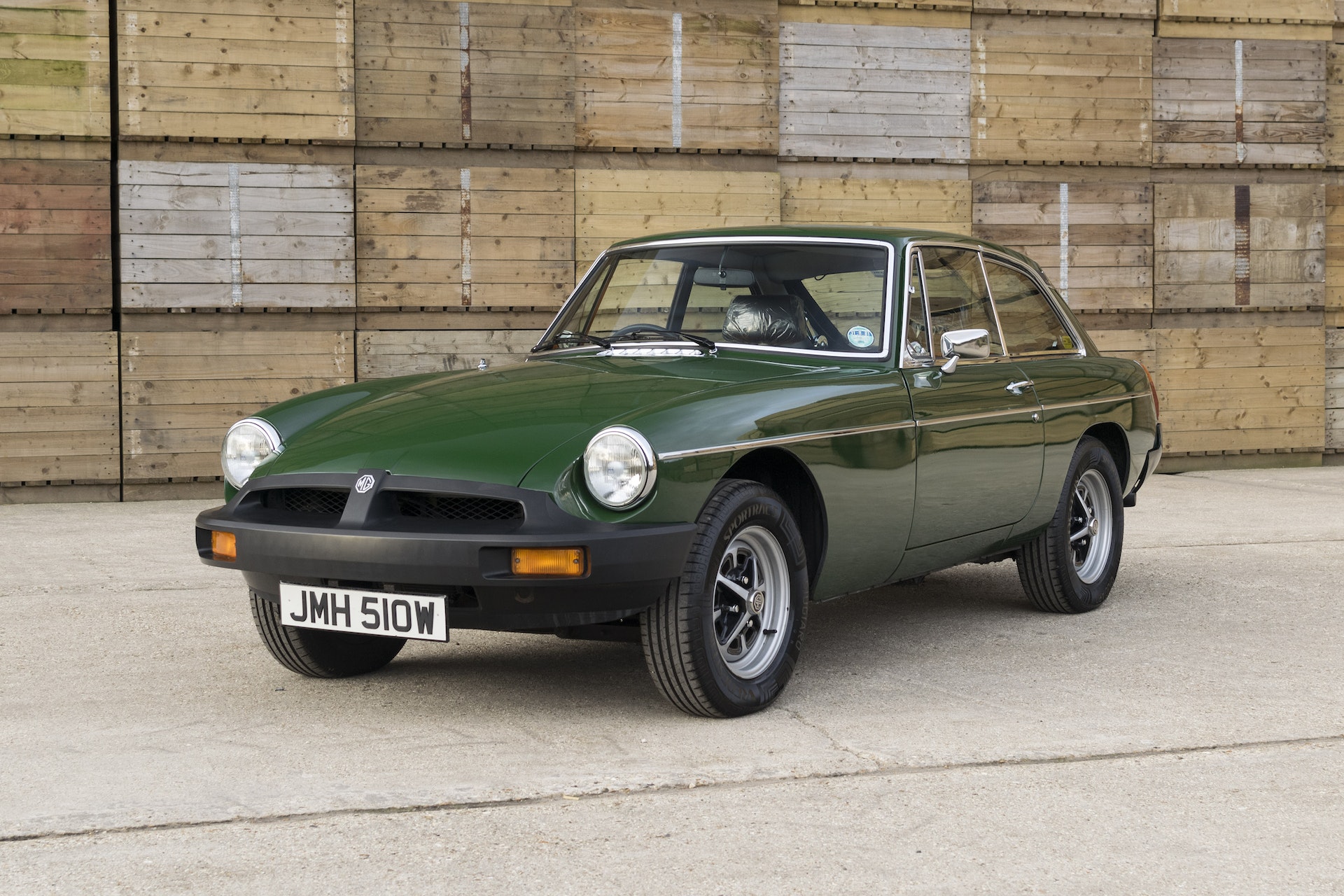 This MGB GT is a collector-quality survivor, presented in astonishing original and show-stopping condition. It is a car that will impress at events, and will undoubtedly trigger positive reactions and conversation whenever it is parked up for fuel or rest stops. Far from being a dust-covered unknown quantity, this time-warp car is in superb mechanical order, and is ready to enjoy on the road if desired. Prospective owners of any classic are often told to buy the best example they can afford, and this particular MGB GT is almost certainly the best example of all.