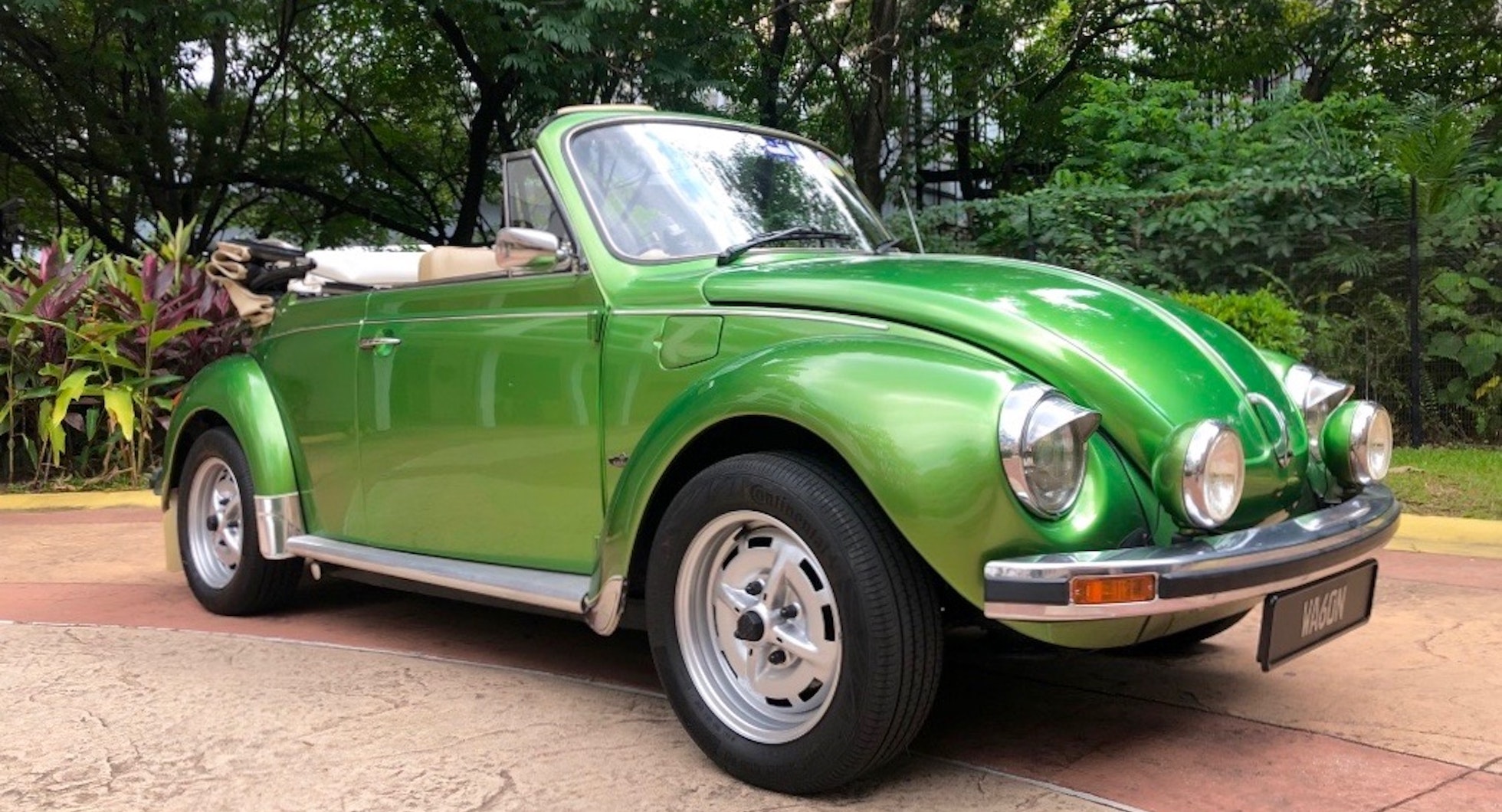 This 1977 VW Beetle 1303LS Cabriolet is a classic design icon presented in outstanding condition and with undisputed rock star provenance. For nearly 30 years - from 1977 until 2005 - this bright green ‘Bug’ was owned by Roger Daltrey, founder and lead singer of The Who. The car comes with a signed letter from Daltrey, verifying that he owned the car for that period, and that it was regularly maintained during the circa 76,000 miles driven in this time. 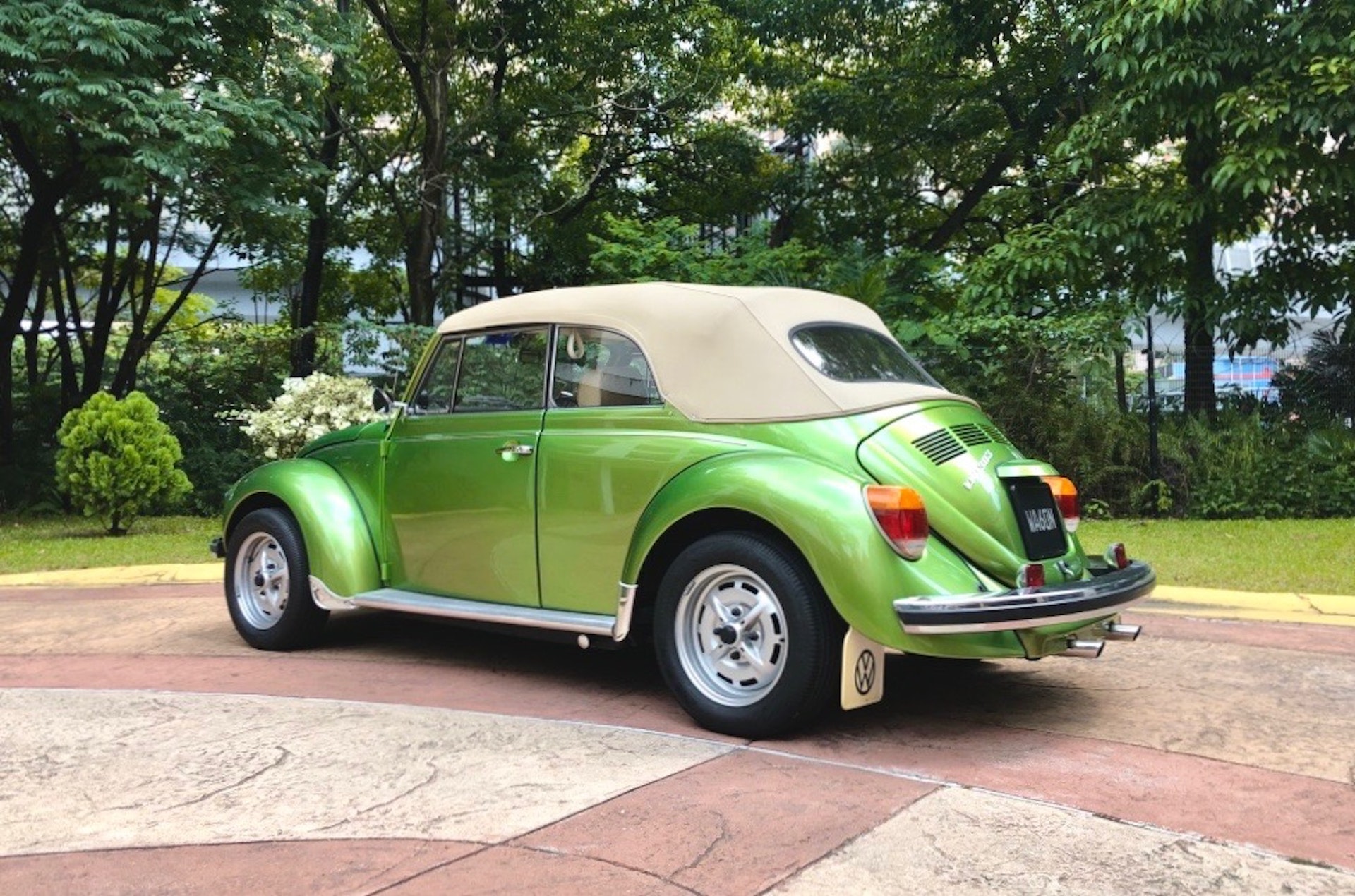 The 1303LS Beetle was the range-topping model of its day. It is powered by the 49bhp 1.6-litre twinport air-cooled flat-four engine, driven through the rear wheels via a four-speed manual transmission. The odometer now indicates 80,812 miles from new. 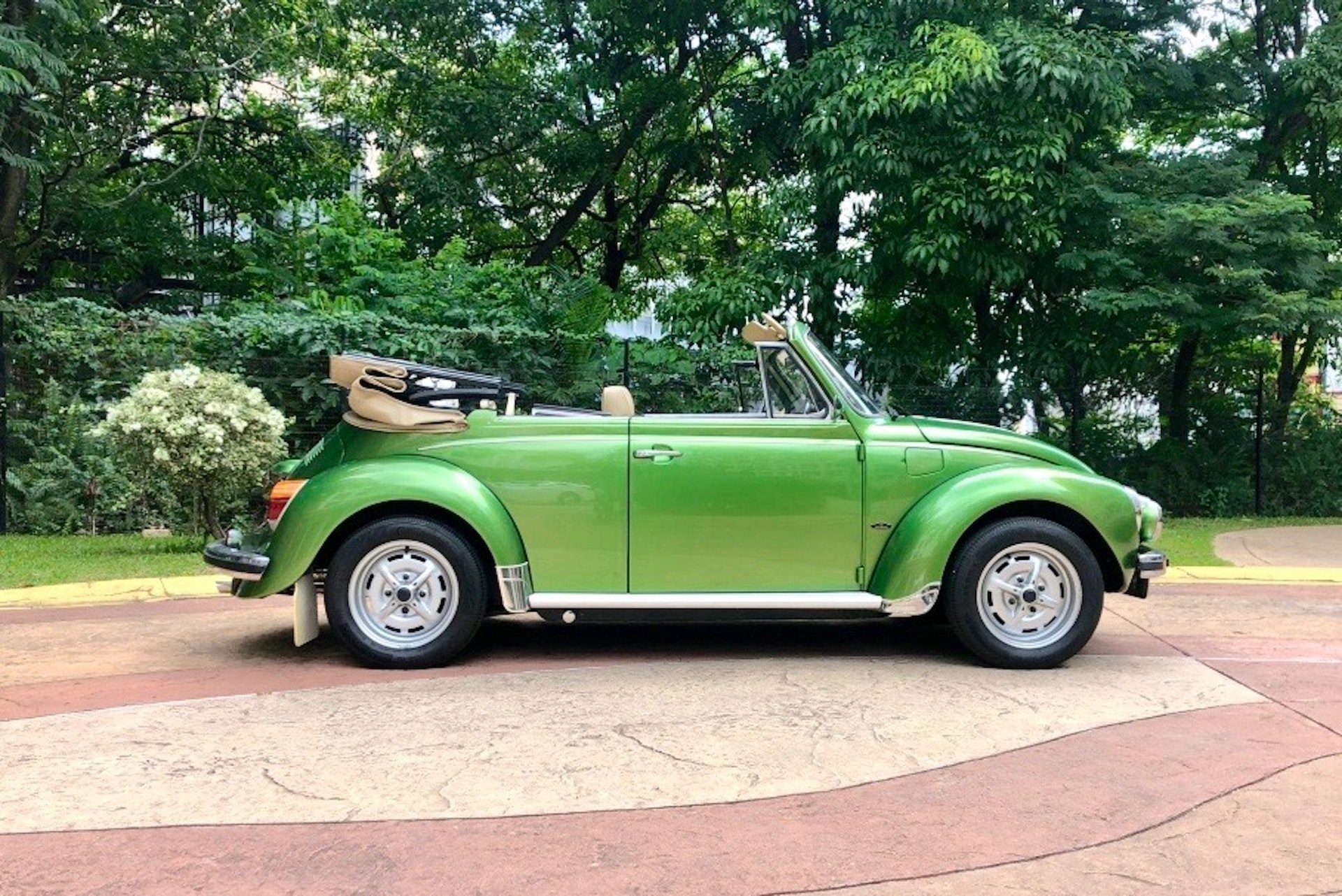 A Volkswagen Museum certificate on file confirms the specification above, that it was built on 27 January 1977, and that the delivery destination was Great Britain. It also confirms the original colour scheme of Viper Green metallic paintwork with a Pale Sand hood. 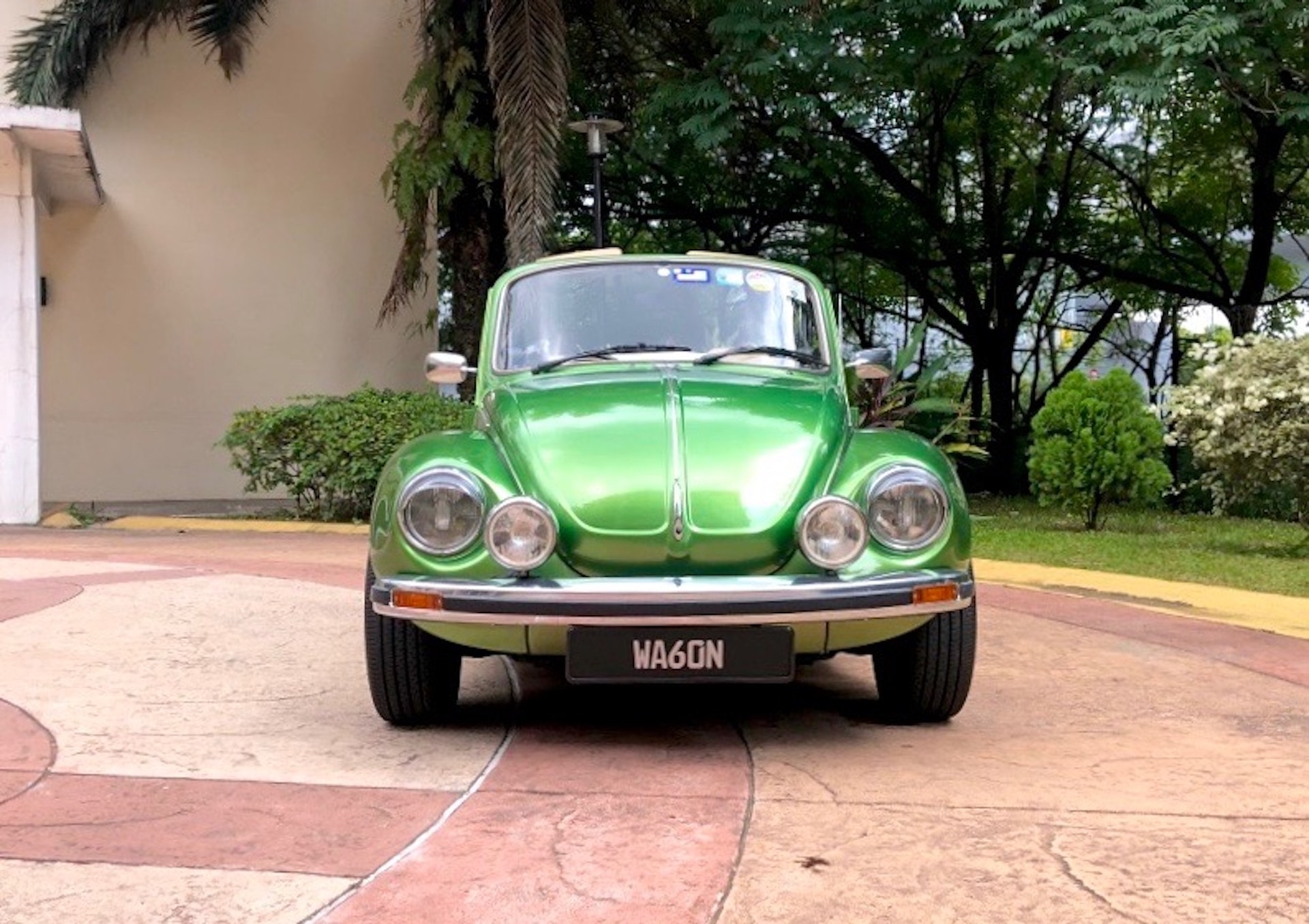 It is understood that there are just two previous registered keepers from new. The vendor has owned the car for the last five years, enjoying around 2,000 miles behind the wheel. The car is now located with him in the tropical climate of Kuala Lumpur. Should the car meet its reserve at auction to a buyer in the UK, the vendor will cover the cost of shipping the car from Malaysia. 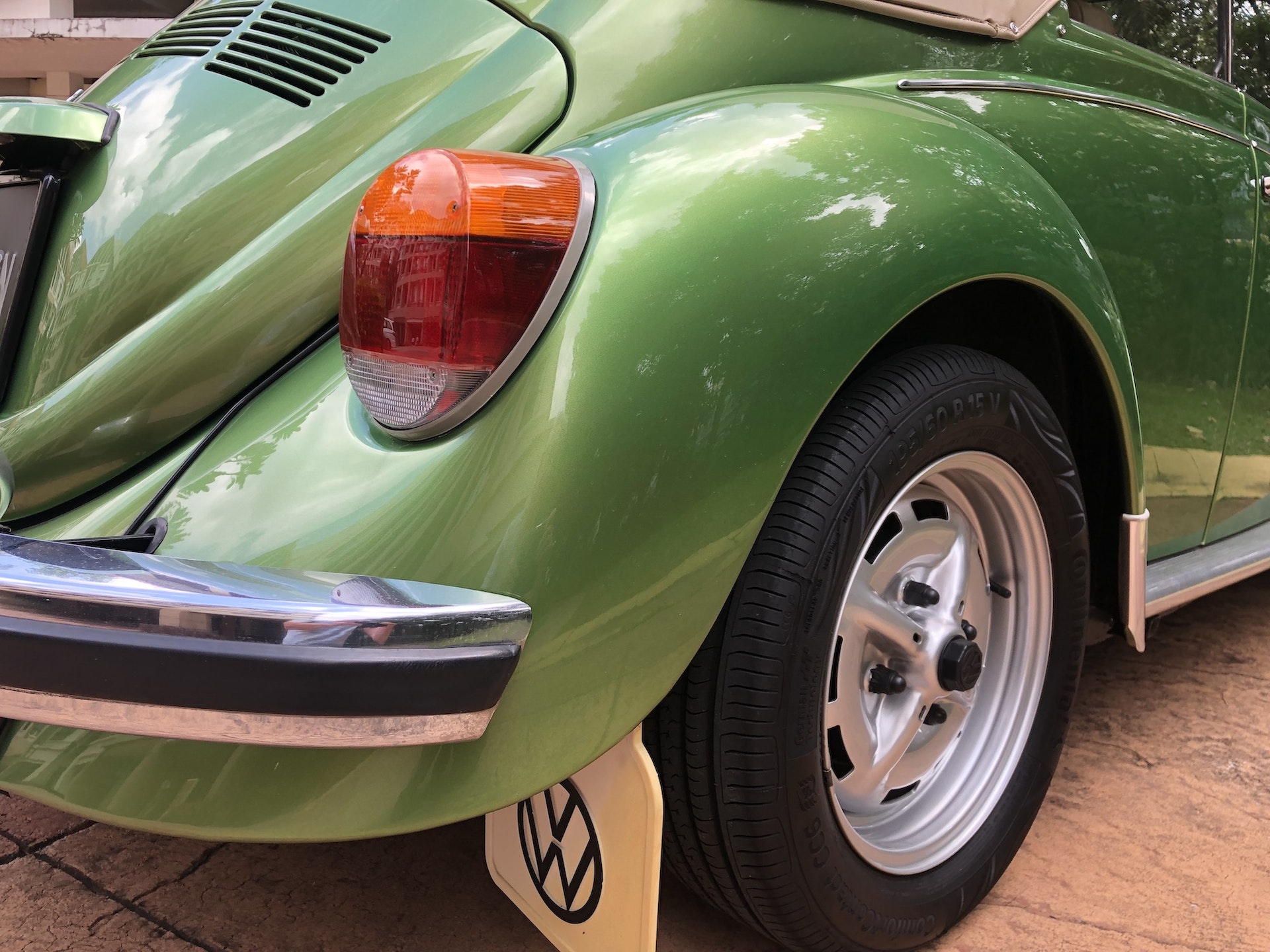 The Karmann bodywork received a full bare metal respray in 2014, in the original factory hue of Viper Green. It is now in outstanding condition, with a smooth and glossy finish all around the car. Its hood has evidently been replaced recently as well, in the correct Pale Sand colour. There is absolutely no damage to the material, and it fits snugly over the original frame. 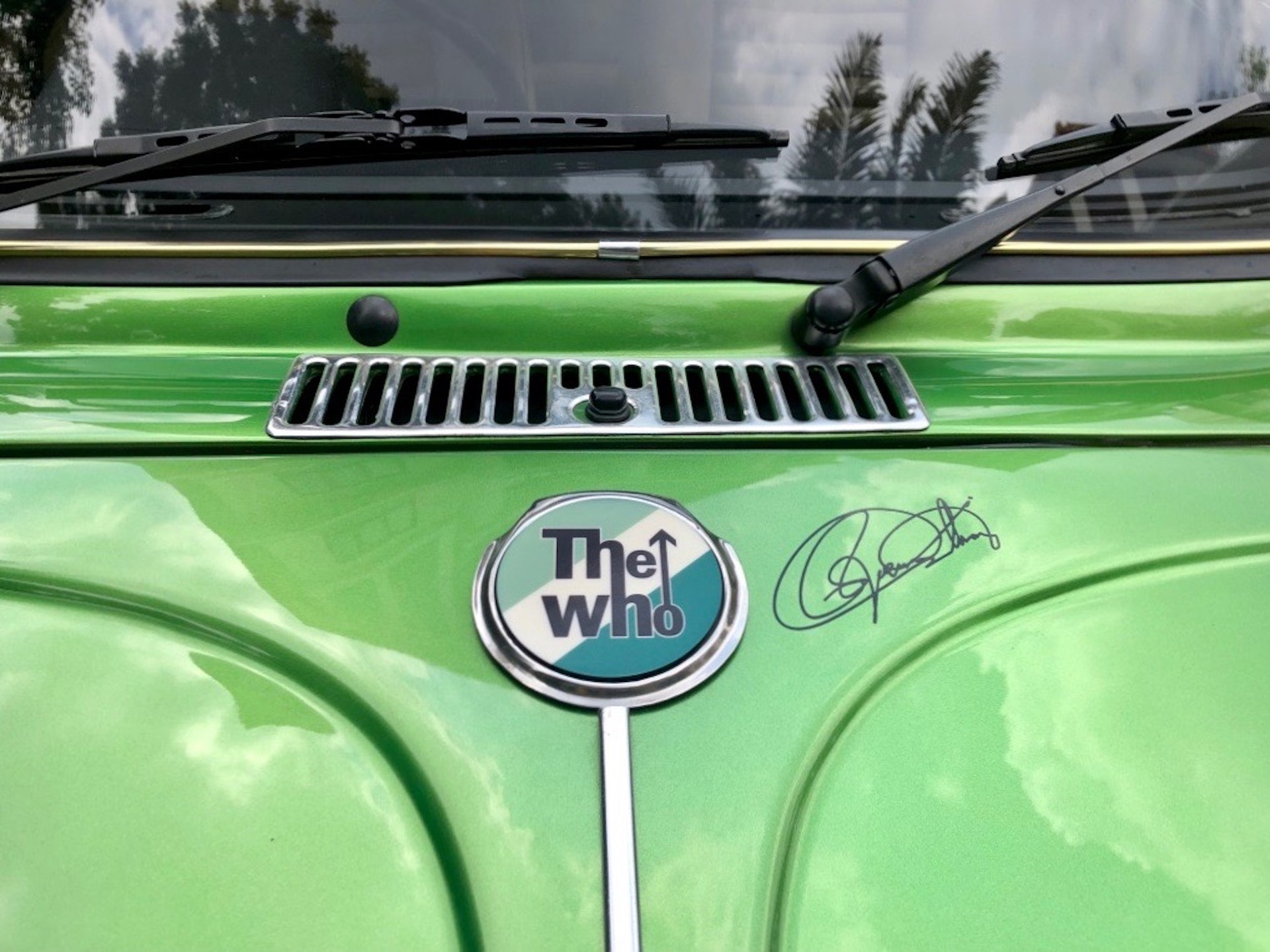 At the front of the car, there are smart Cibie Oscar driving lamps, which were fitted during Daltrey’s ownership. All of the rubber seals and body trims around the exterior are in very good order, and there is only very minor pitting to the brightwork around the window frames and wing mirrors. The car sits on the factory specification 15-inch ‘Sport’ style wheels, which are in great shape. 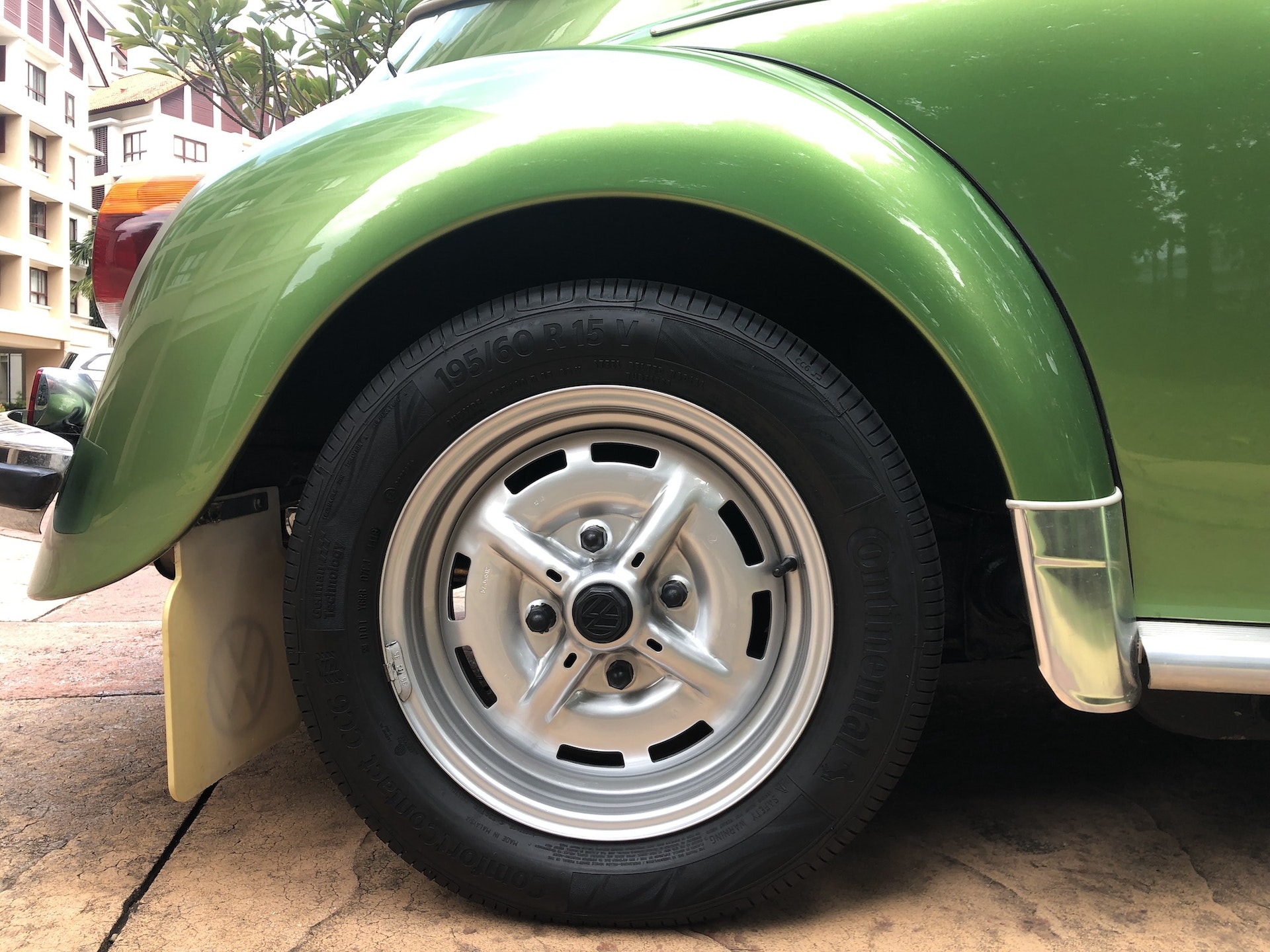 During the vendor’s ownership, the seating and door cards have been fully re-trimmed in beige leather, with perforated centre panels. As such, the upholstery is in pristine condition, and there are full diagonal safety belts for all four seats. 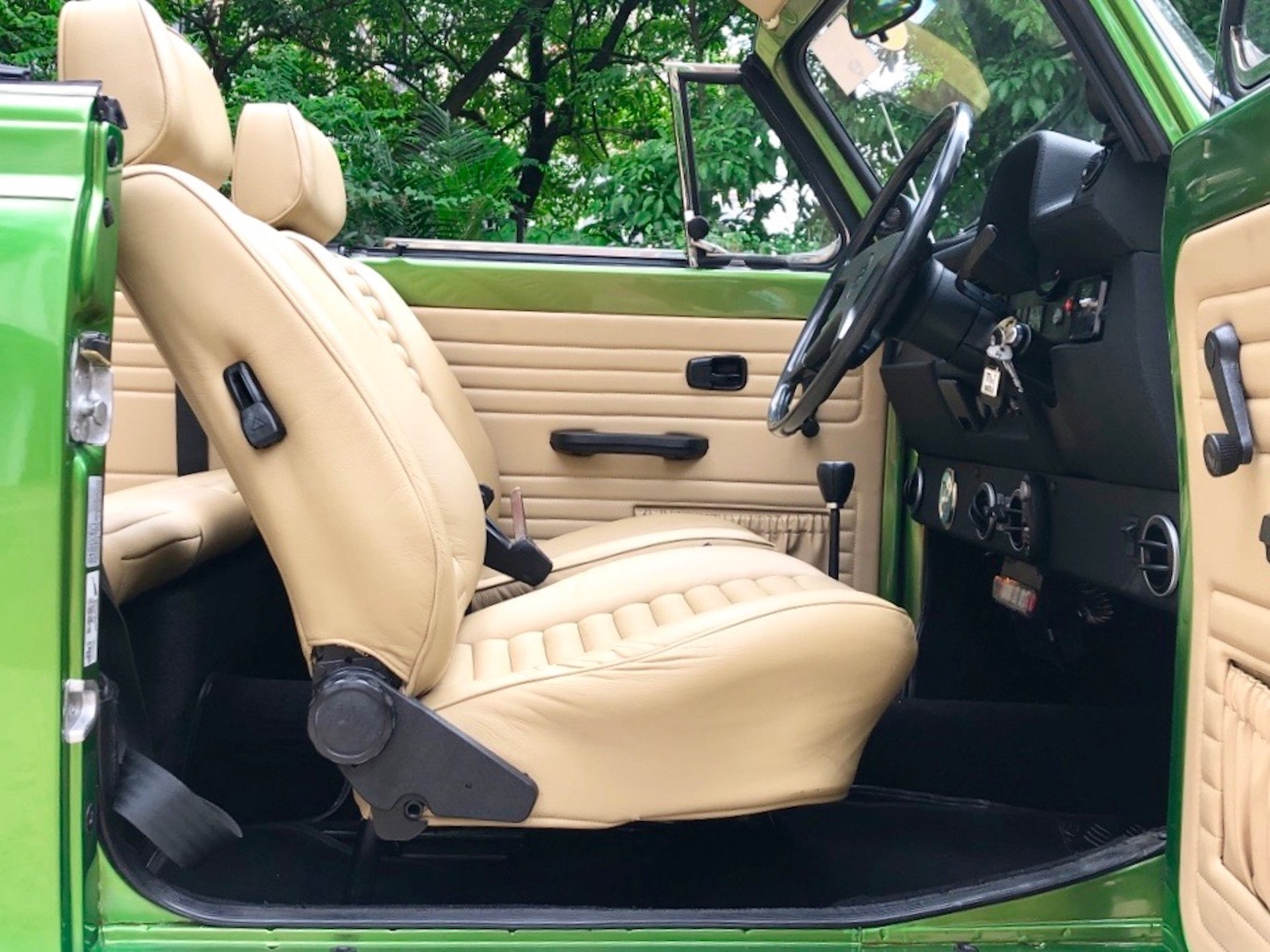 Ahead of the driver, the original steering wheel and dashboard are in place, with the latter also having been re-trimmed. A contemporary Alpine stereo head unit is fitted, with an MP3-compatible CD player, additional speakers, and Bluetooth connectivity. A custom air-conditioning installation is also present, with the compressor running off the engine via a modified pulley system. 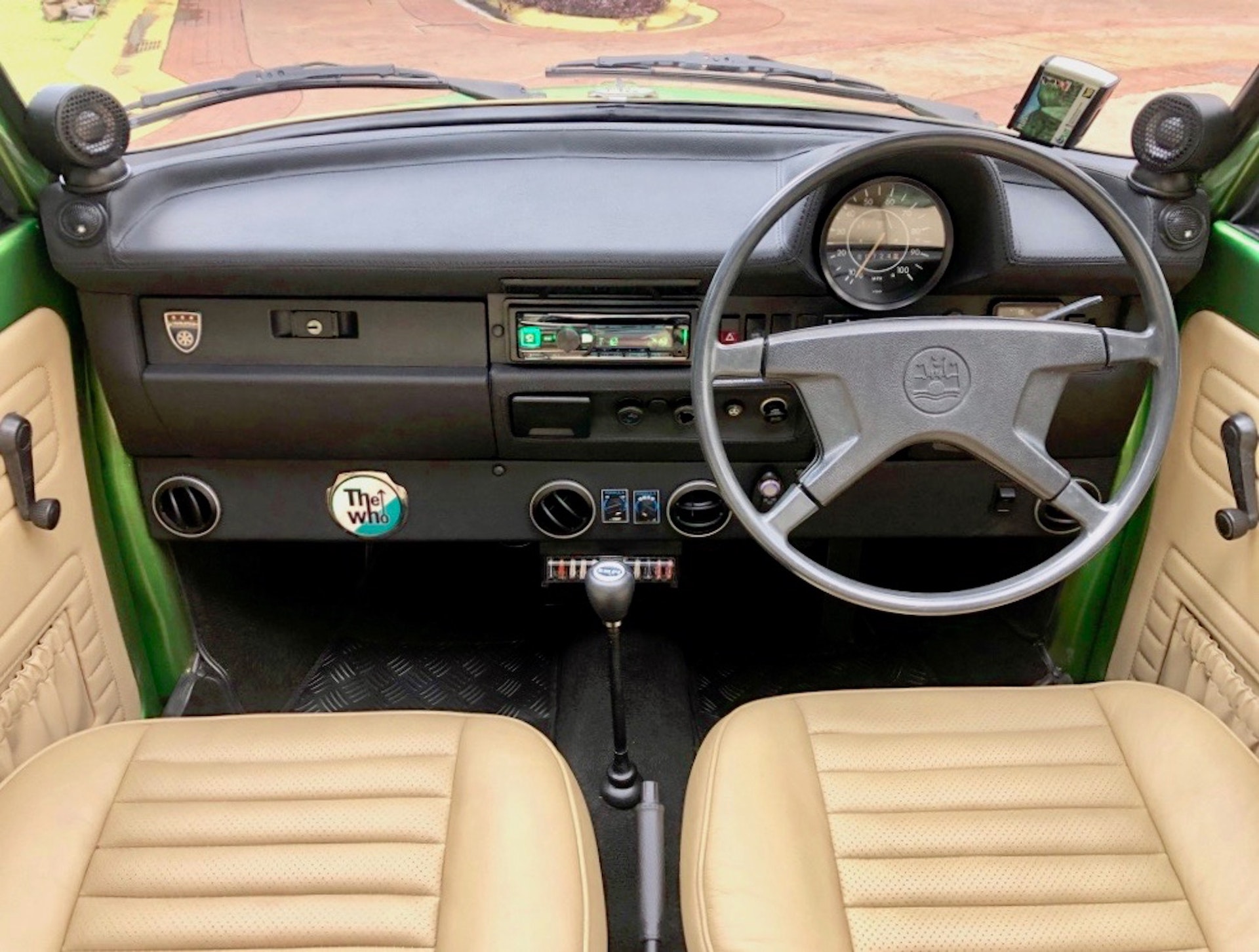 The boot area is in good condition, with smart black carpeting tailored to size. A full-size spare wheel is also in place under the boot floor, fitted with a Continental tyre date-coded to 2018. 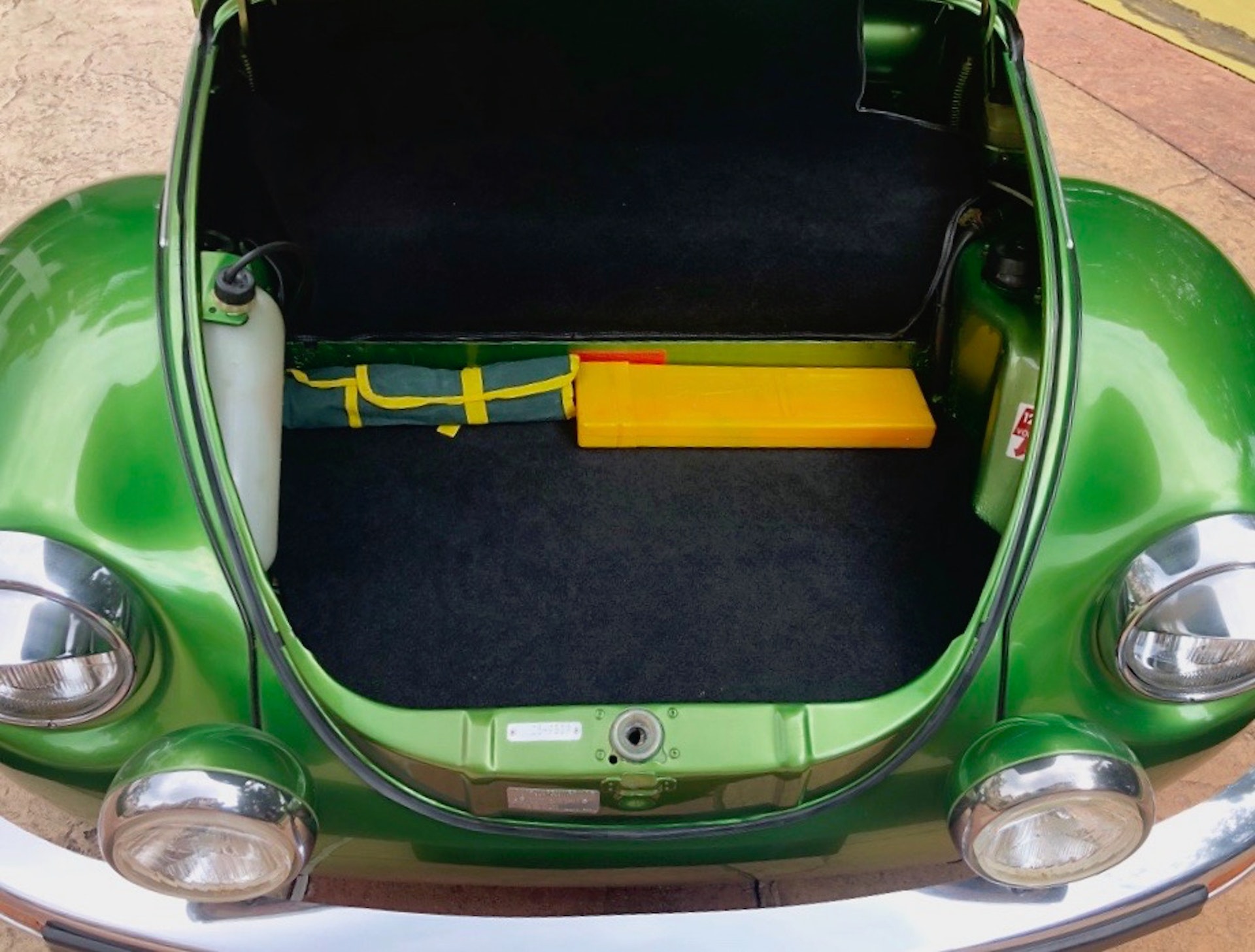 During the penultimate service while in Roger Daltrey’s care, the original service book was mislaid, and so the maintenance history for this period is authenticated solely by his signed letter. The car’s most recent scheduled maintenance was just a few months ago in Malaysia, which comprised a standard annual service with an engine oil and filter change. 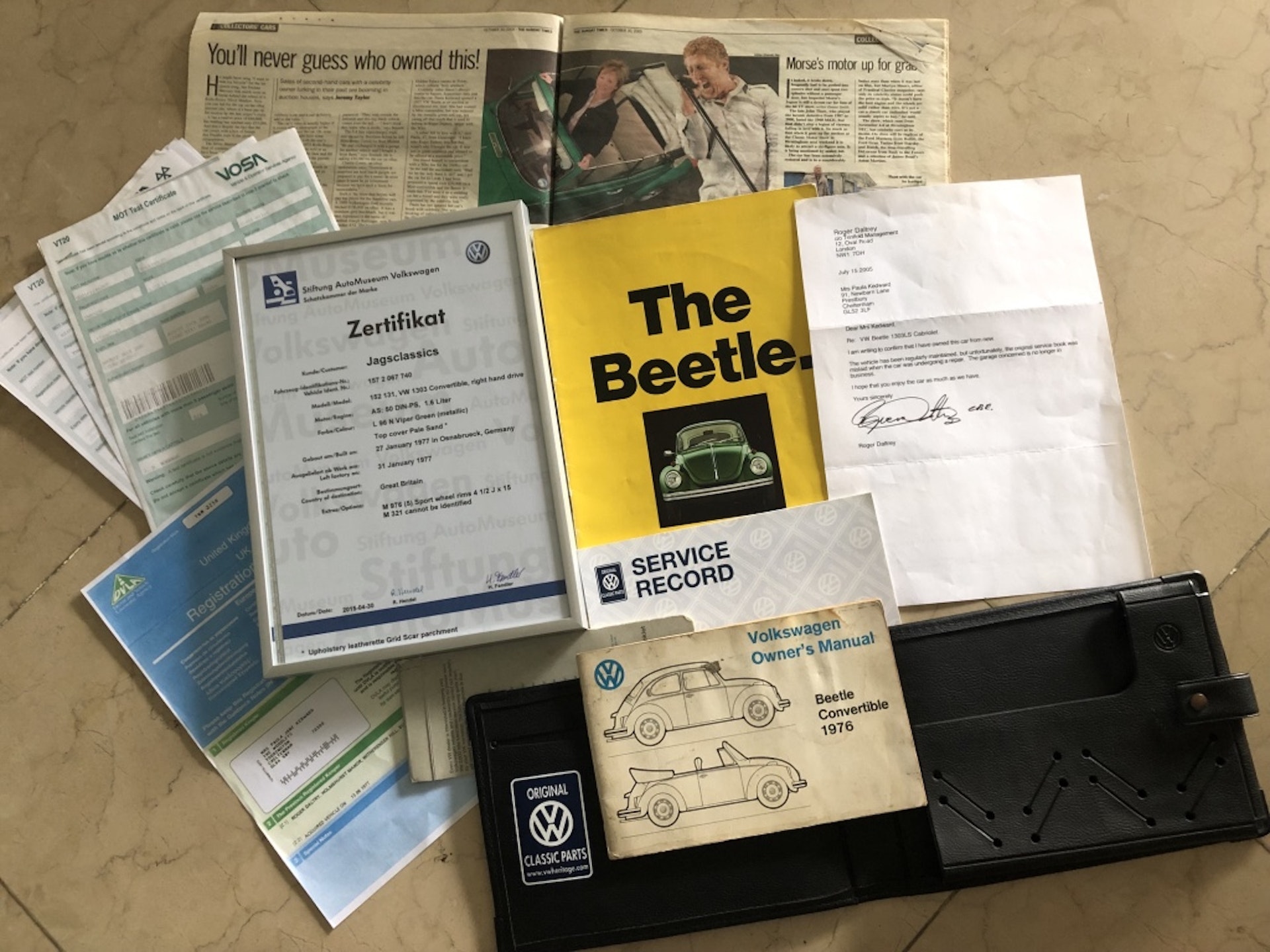 The wheels are fitted with a set of Continental CC6 tyres in size 195/60 R15 all round. They are date-coded to 2018 and are in superb condition with almost full tread remaining. 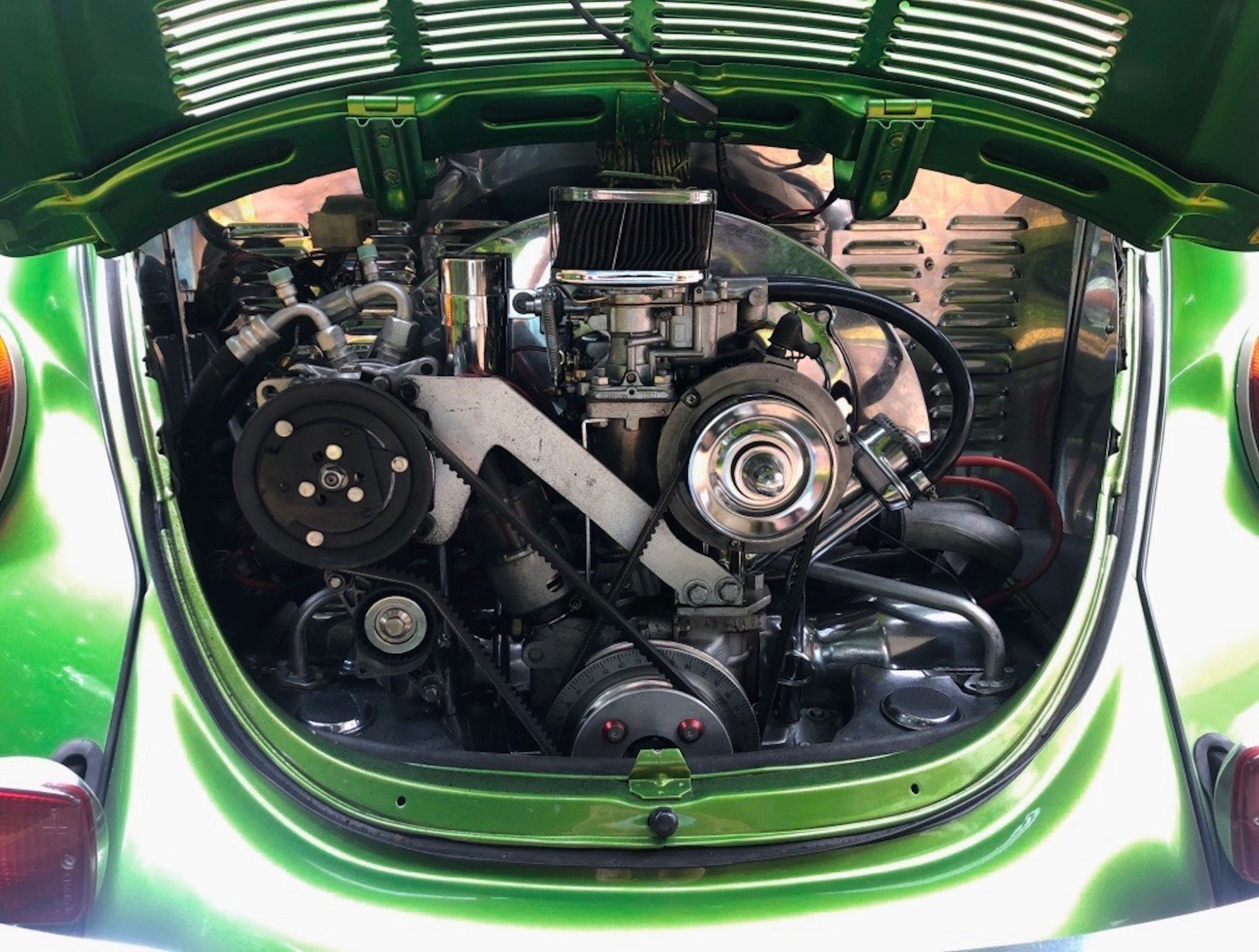 Accompanying the car is an original book pouch, containing a period owner’s manual, the authenticity certificate from Stiftung AutoMuseum Volkswagen, several old MOT certificates and previous V5 documents. A newspaper article from 2005 when Roger Daltrey sold the car is also included, along with his signed letter to the buyer at the time. 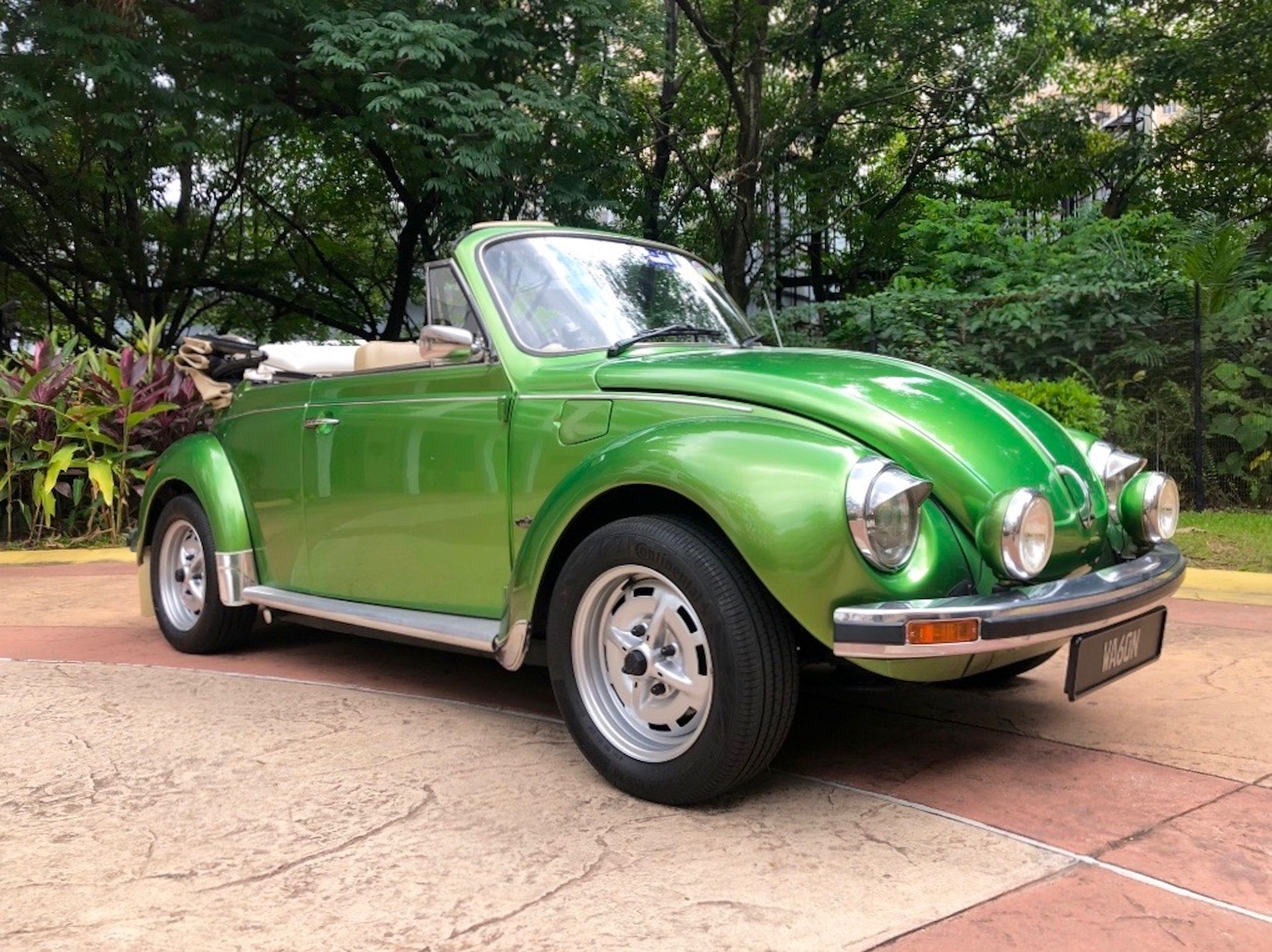 This VW Beetle 1303LS Convertible is a superb and sought-after drop-top, as well as a genuine rock and roll collector’s item. As the range-topping model of its era, it boasts a desirable factory specification, and it is also presented in the original eye-catching colour scheme. Regardless of whether you are a collector of top-notch air-cooled Volkswagens, or simply a big fan of the music of The Who, this represents an unmissable opportunity to acquire a wonderful classic car with peerless provenance.

Please note: the vendor has prior experience of export from Malaysia, and will cover the cost of shipping the car to the UK in the event of a successful auction. The Collecting Cars team can also provide guidance on re-importing to the UK through the NOVA process in this instance.