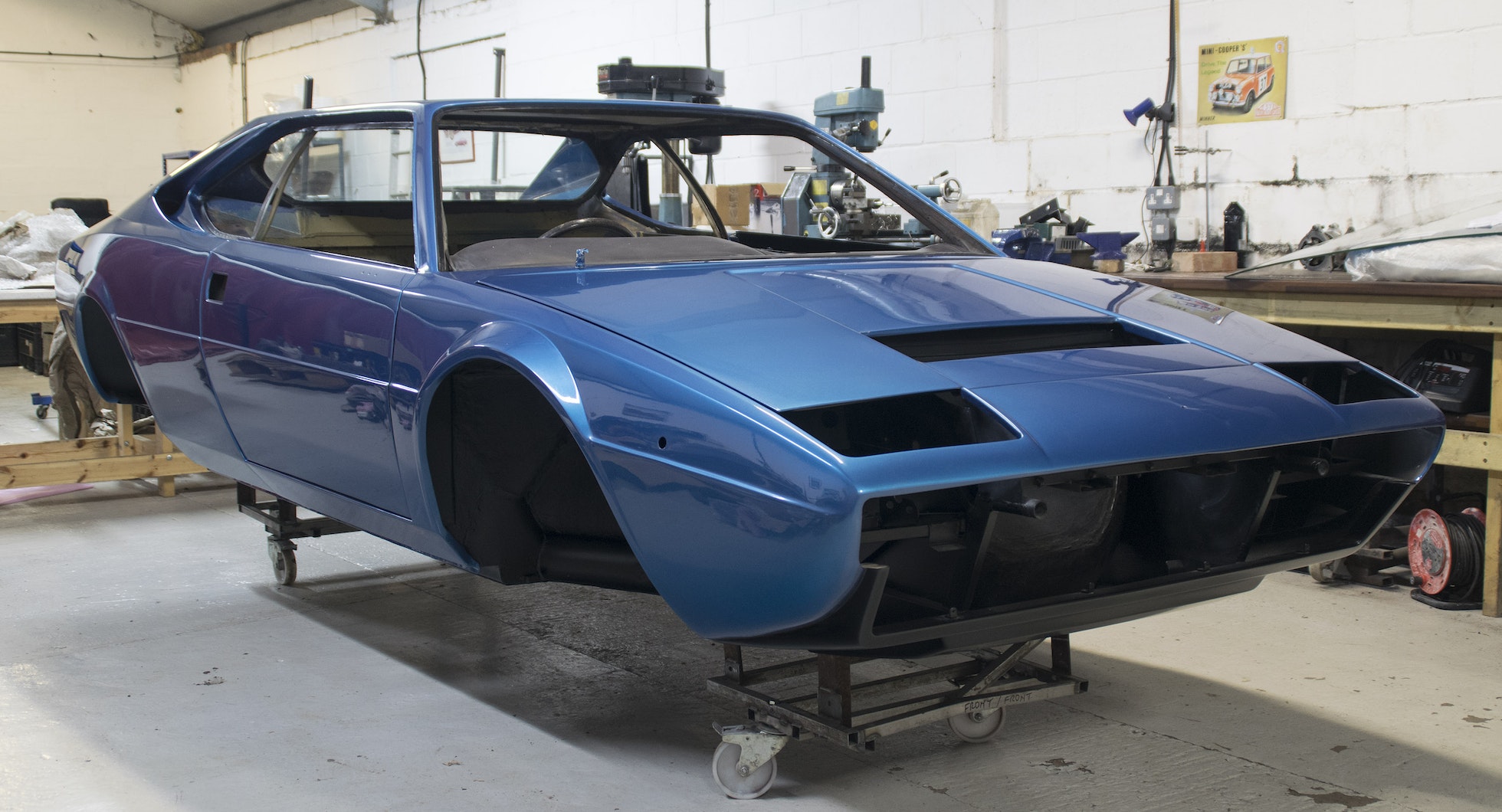 This Ferrari Dino 308 GT4 is a rare opportunity to acquire and complete the restoration of a superb 1970s sports car. The GT4 was Ferrari’s first V8 production car, and was given its unmistakable ‘wedge’ styling by Marcello Gandini at Bertone. Its engine is the flat-plane crank 2.9-litre F106AL V8, producing around 250bhp, driven through the rear wheels via a five-speed manual transmission. 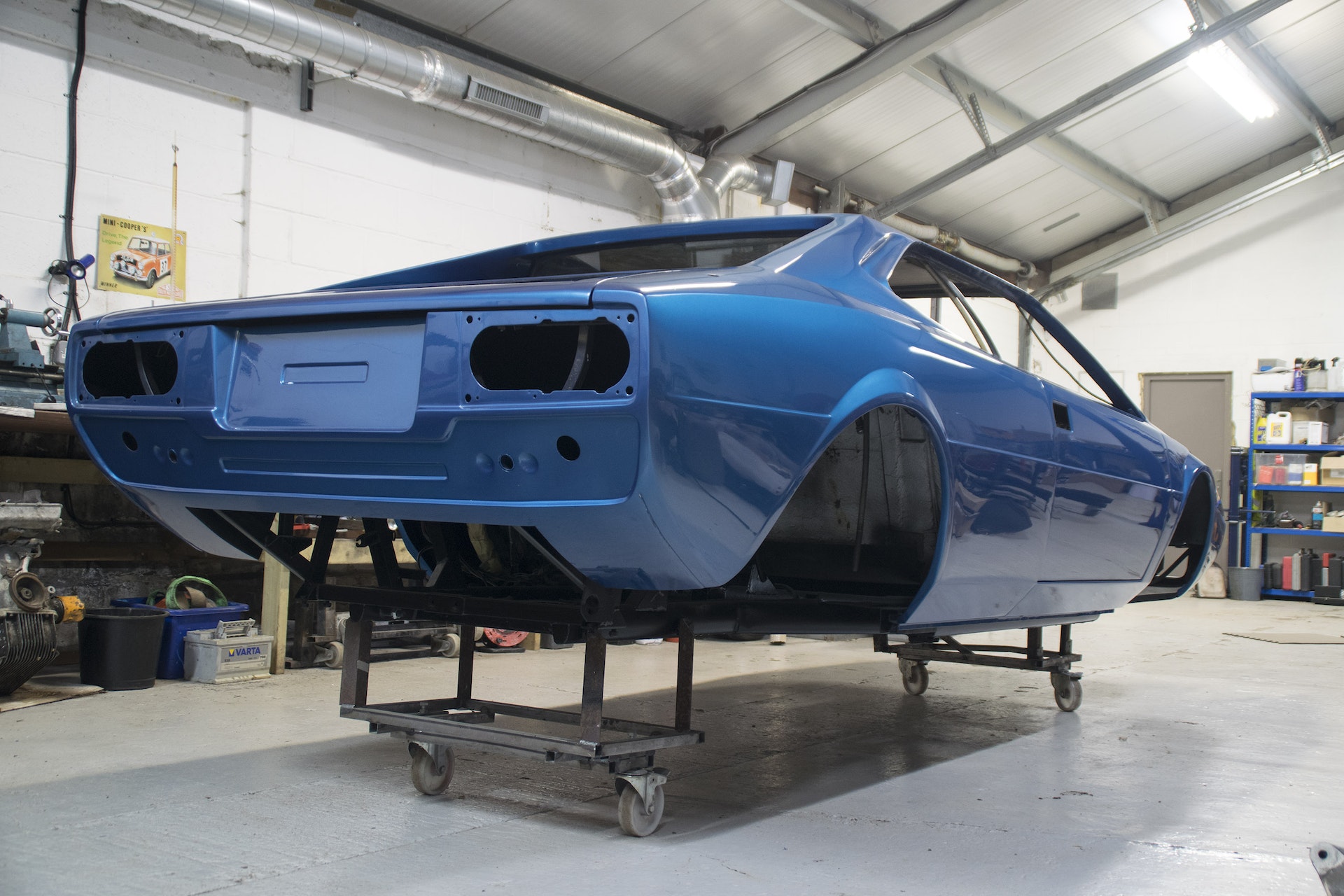 An original 1977 model built in right-hand drive and supplied new to the UK, this 308 GT4 was specified with options that included a sunroof panel, heated rear screen, and electric windows. It is understood to have left the factory finished in the 'Blu Dino' hue, along with beige upholstery. 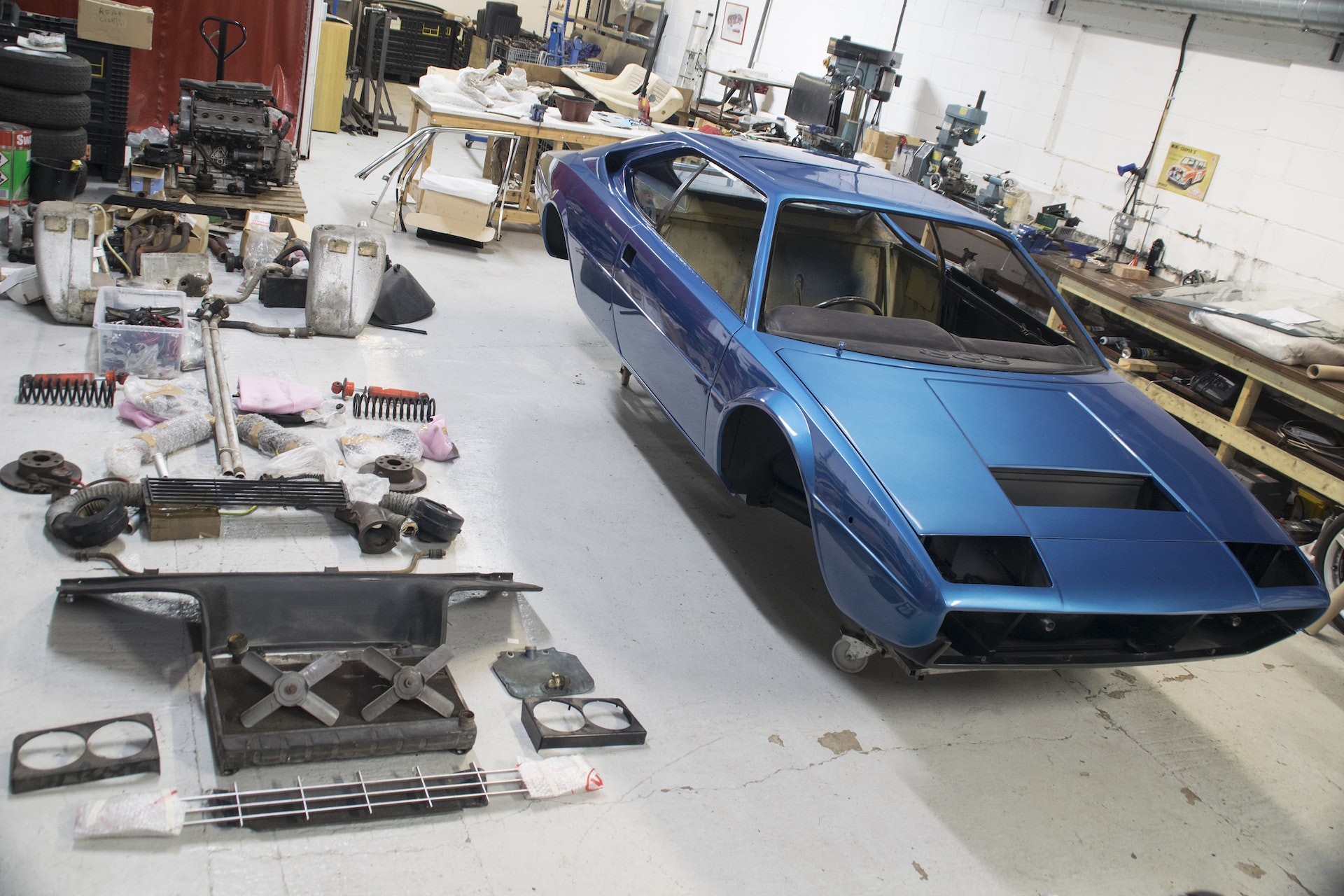 It was first registered on 17 August 1977, to its first owner who was an architect in London. By the early 1980s, the car was registered to a gentleman in Chiswick, with around 40,000 miles on the odometer. In June 1984, it was acquired by a resident of Aberdeenshire, who enjoyed a few thousand miles behind the wheel on Scottish roads. 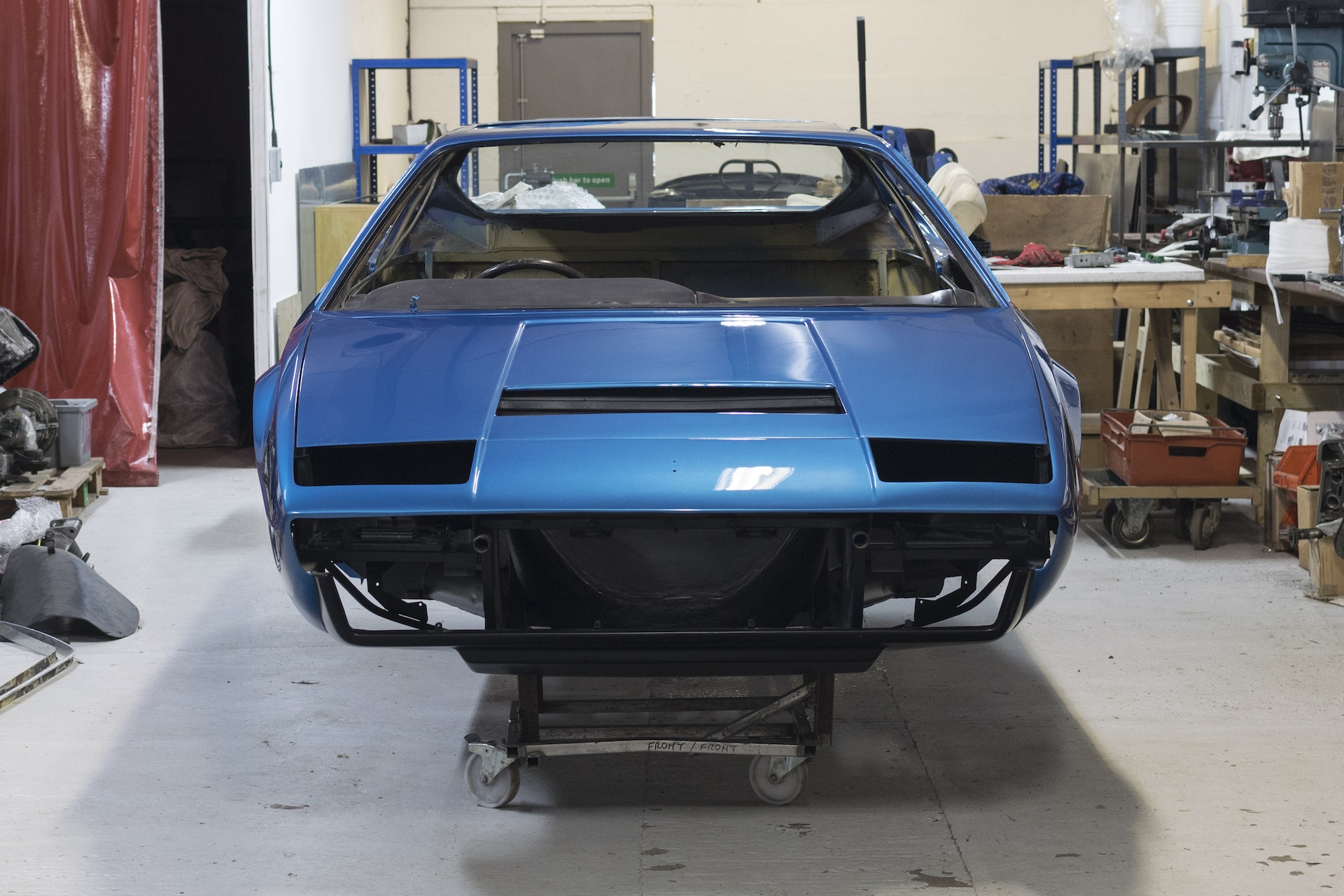 In July 1985, the 308 GT4 was purchased by its next owner, and the car returned to the south of England, to the town of Lightwater in Surrey. The car would spend the next 31 years with this owner, though he only used it on the road between 1985 and 1991, taking the mileage to just over 56,000 miles. For the 25 years between 1991 and 2016, the owner was often posted overseas, and so he entrusted his friend in the same town to start the car up regularly and keep it in good running condition. 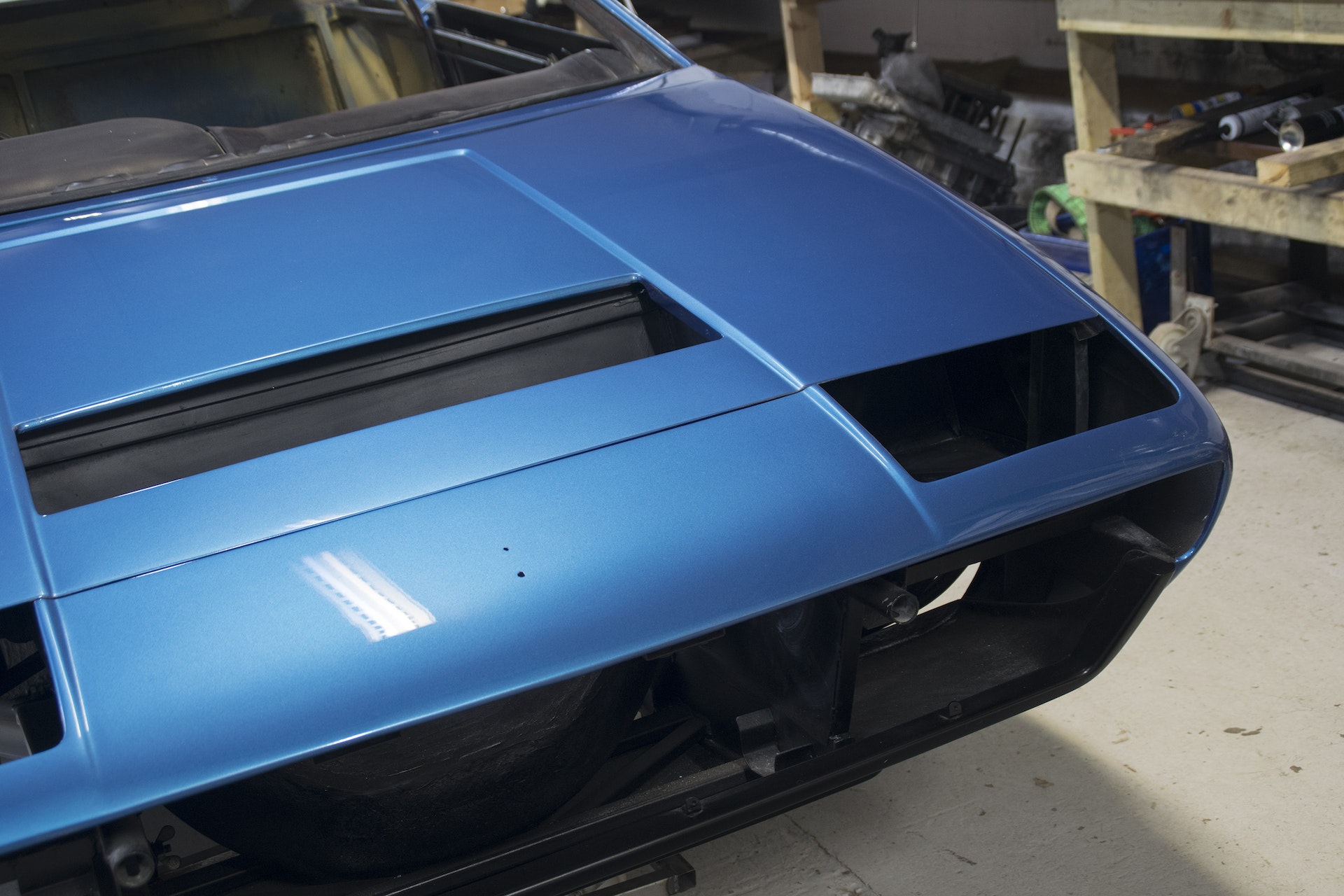 Finally, in 2016 when the market was in his favour, the owner decided to sell the 308 GT4, and re-registered the car in his friend’s name to act as an intermediary. Within a few months, he had sold the car to the current owner. As its robust V8 engine had been started frequently, it required very little to get it running well. 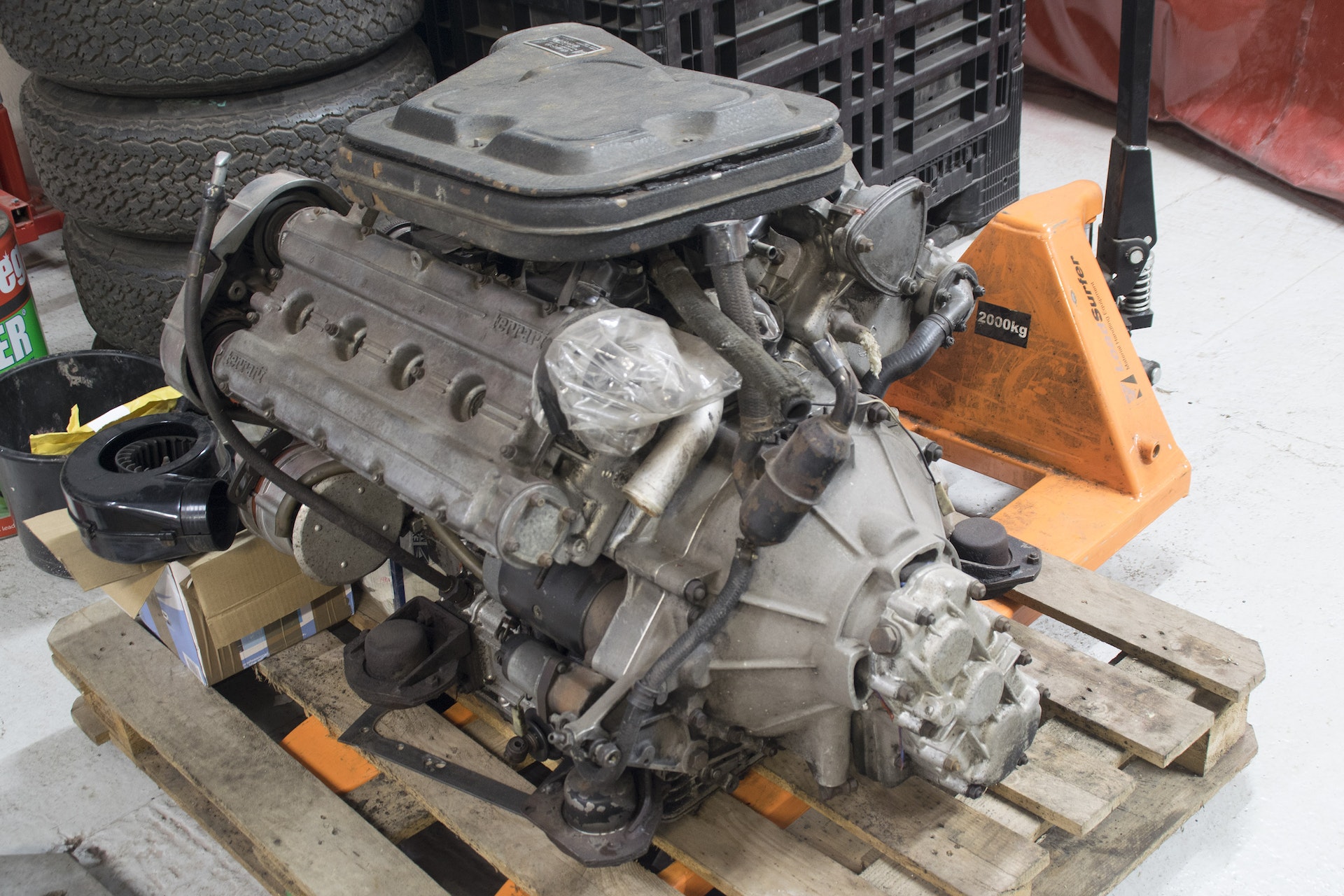 In 2017, the paintwork was partially stripped and blasted to get a look at what metalwork repairs would be needed. The lower sections in particular were found to be suffering from significant corrosion, so the car was dispatched to specialist Gilbert-Michaelson in West Yorkshire for a full chassis and body refurbishment. 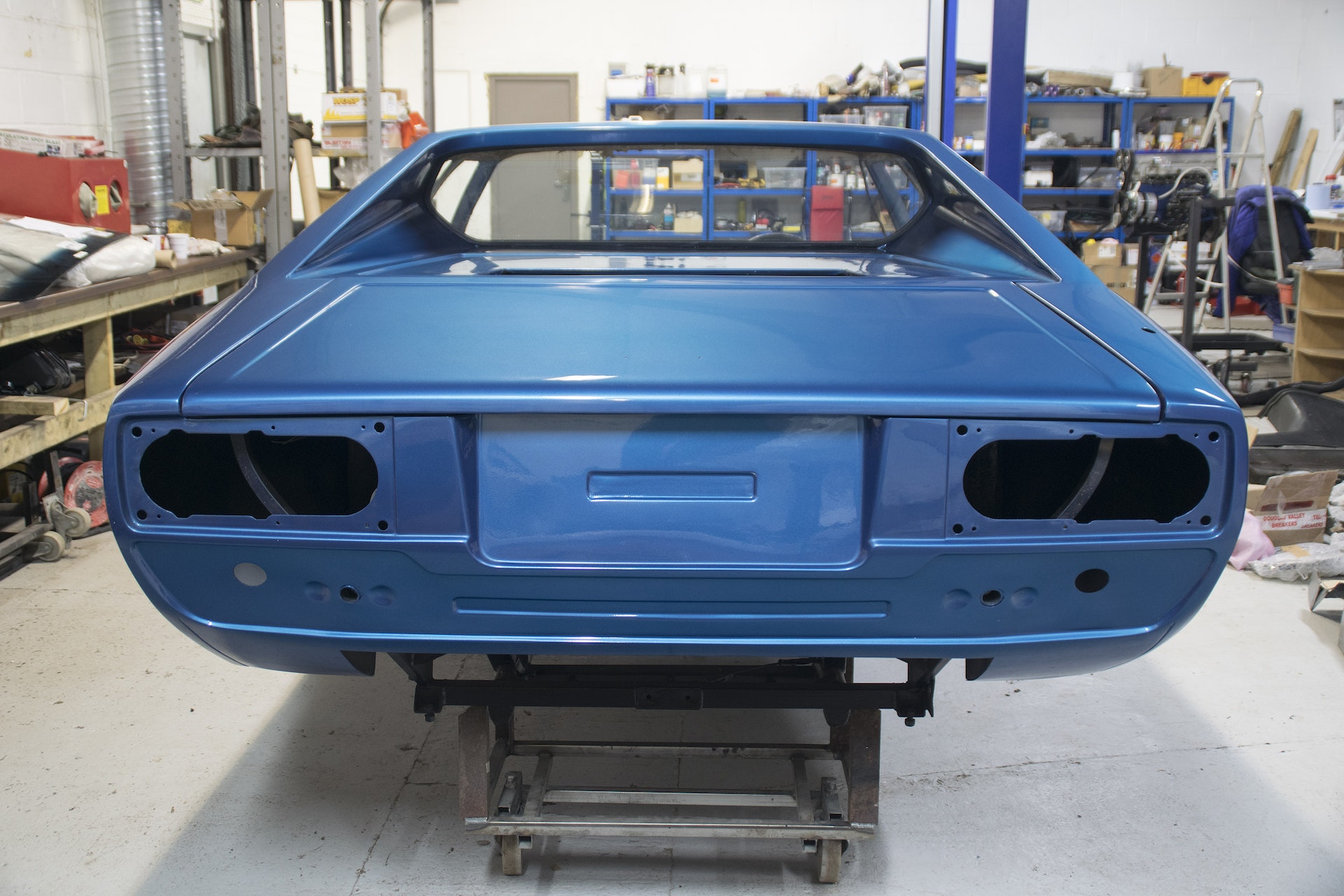 The bare-metal restoration was completed during 2018, and included new panels for most of the bodywork below the swage line. A number of poor repairs had been carried out in the past, and these needed to be removed and replaced with precisely cut and shaped new metal. 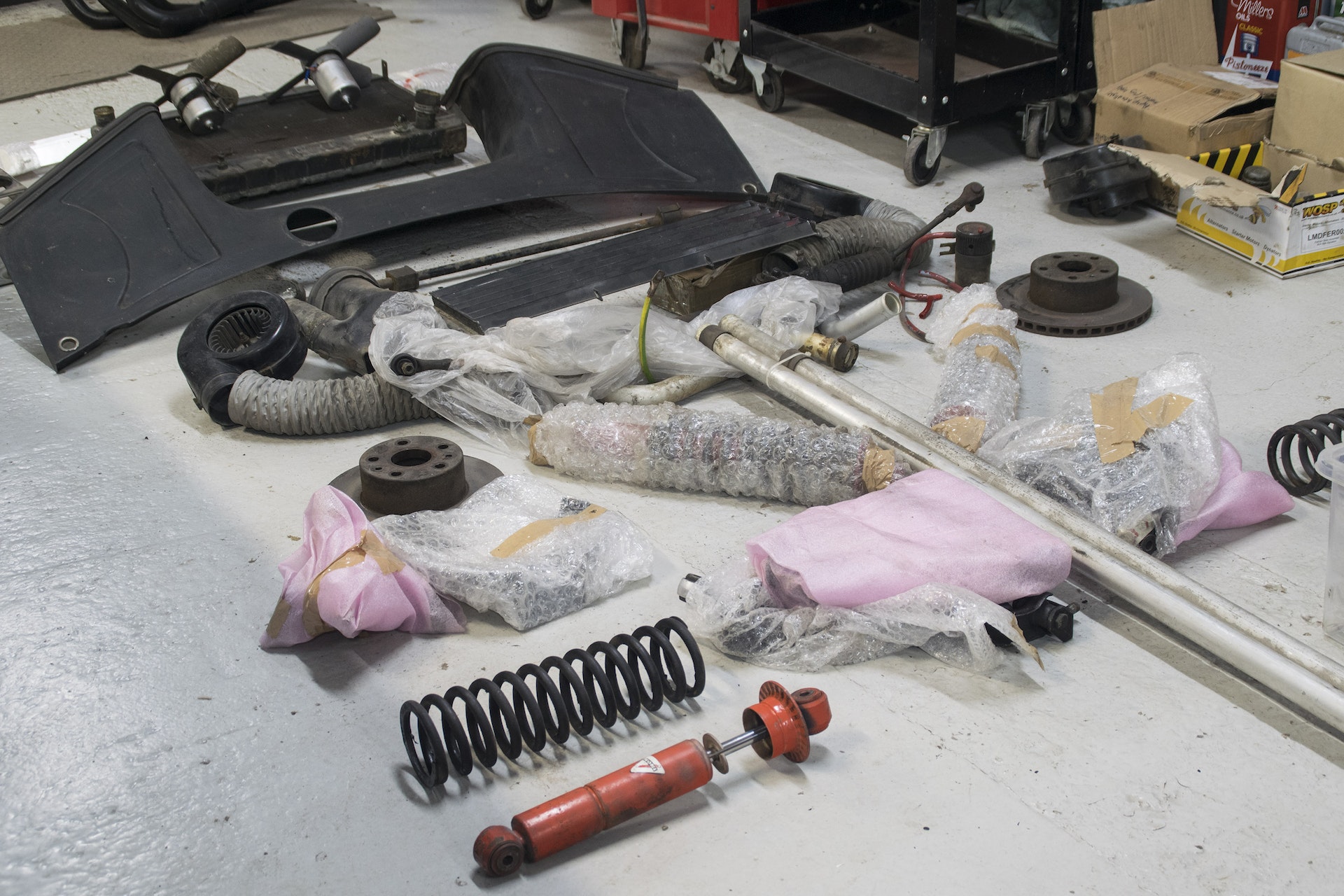 All of the fabrication was done in-house at Gilbert-Michaelson, including new sills, inner sills, boot floor, and repairs to the front and rear wings, as well as the doors. The panels underneath the front wheel arches were also renewed, along with the aluminium undertray, featuring the correct contours and access hatch cut-out. Prospective bidders can visit this link to view photos taken during the body restoration, showing the quality and fitment of the new metal: http://www.gilbert-michaelson.co.uk/ferrari-308-gt4.

Once the body restoration was complete, the car was moved into the specialist’s paint shop, where it was given a full respray in the period Blu Ribot colour, with the correct satin black finish to the underbody surfaces, engine, boot, and bonnet compartments, as well as the lower sills. 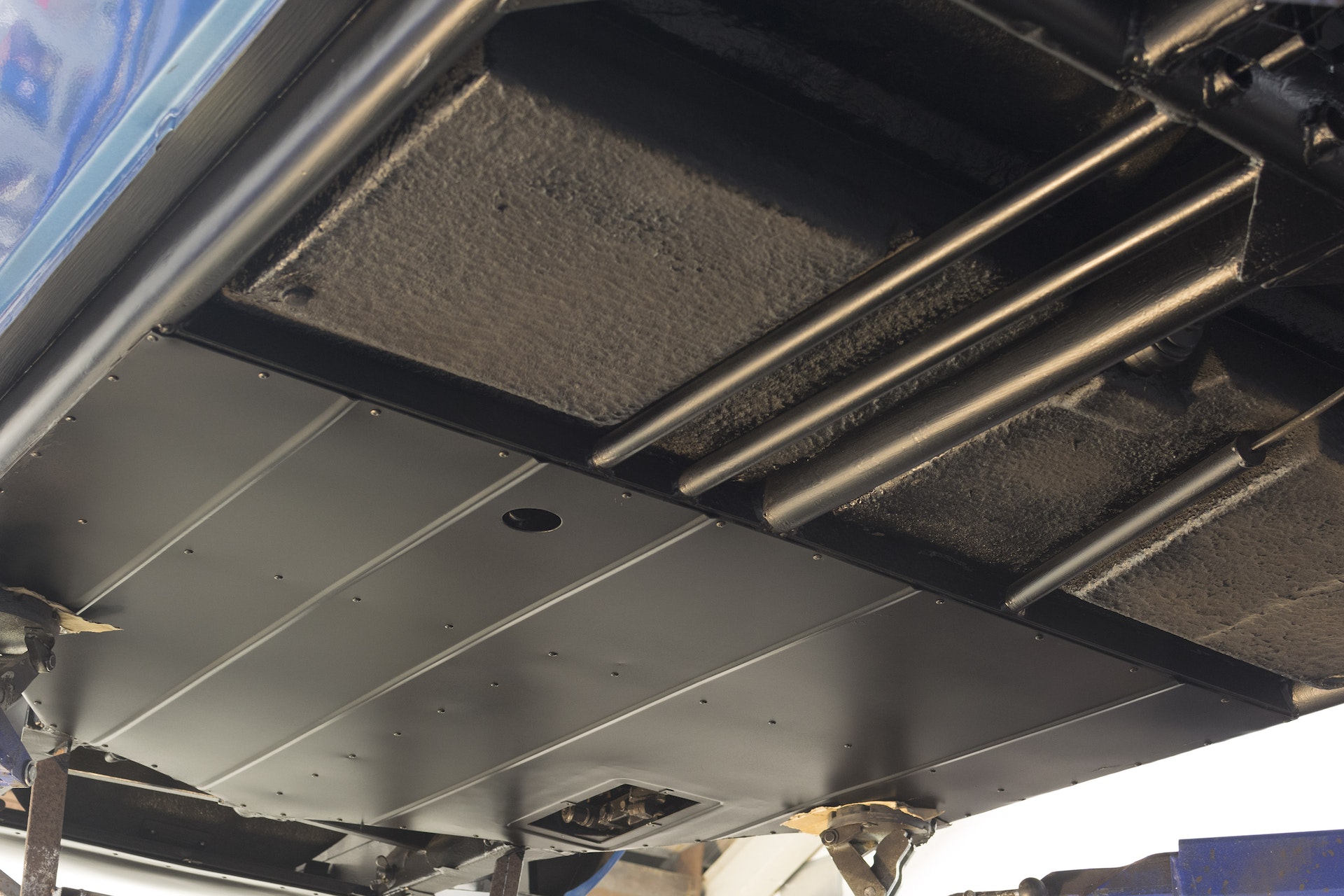 This Ferrari Dino 308 GT4 is now offered as a complete and partially finished project, with original mechanicals as well as dozens of boxes of components that are stored with the car. The GT4 was disassembled in the same workshop that it currently resides in, so there are no items that are known to be missing. Due to the purchase of numerous brand-new parts in the last few years, there are more likely to be duplicates rather than omissions. 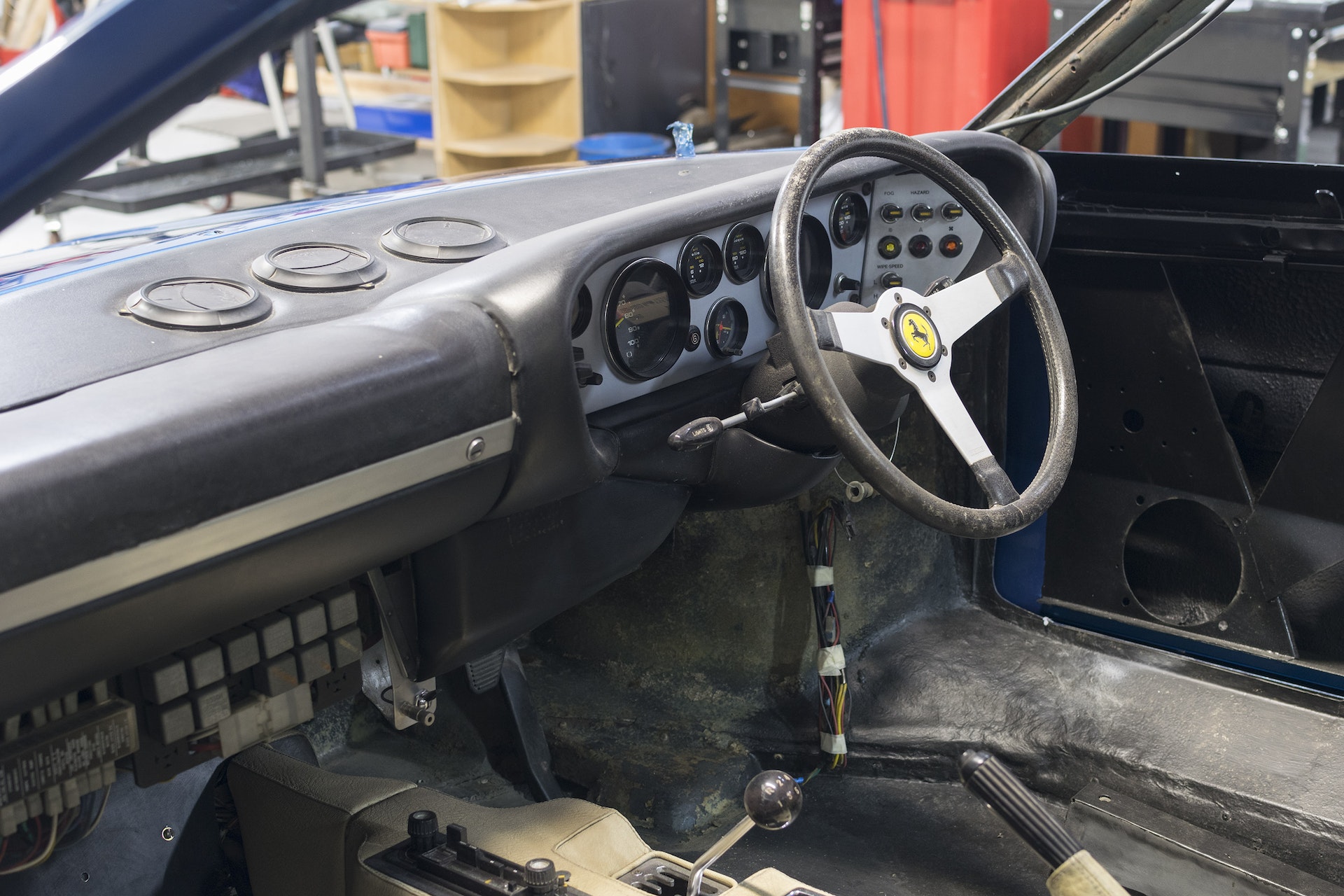 The detailed photo set below shows the current pristine condition of the chassis and body. Its Blu Ribot paintwork has a smooth and glossy appearance, and suits the lines of the GT4 perfectly. The two headlight pods have been painted to match, and are packaged safely, ready to be reinstalled. All of the glass is present and correct, including original side windows, front and rear quarter lights, rear window, and a brand-new windscreen from Pilkington. 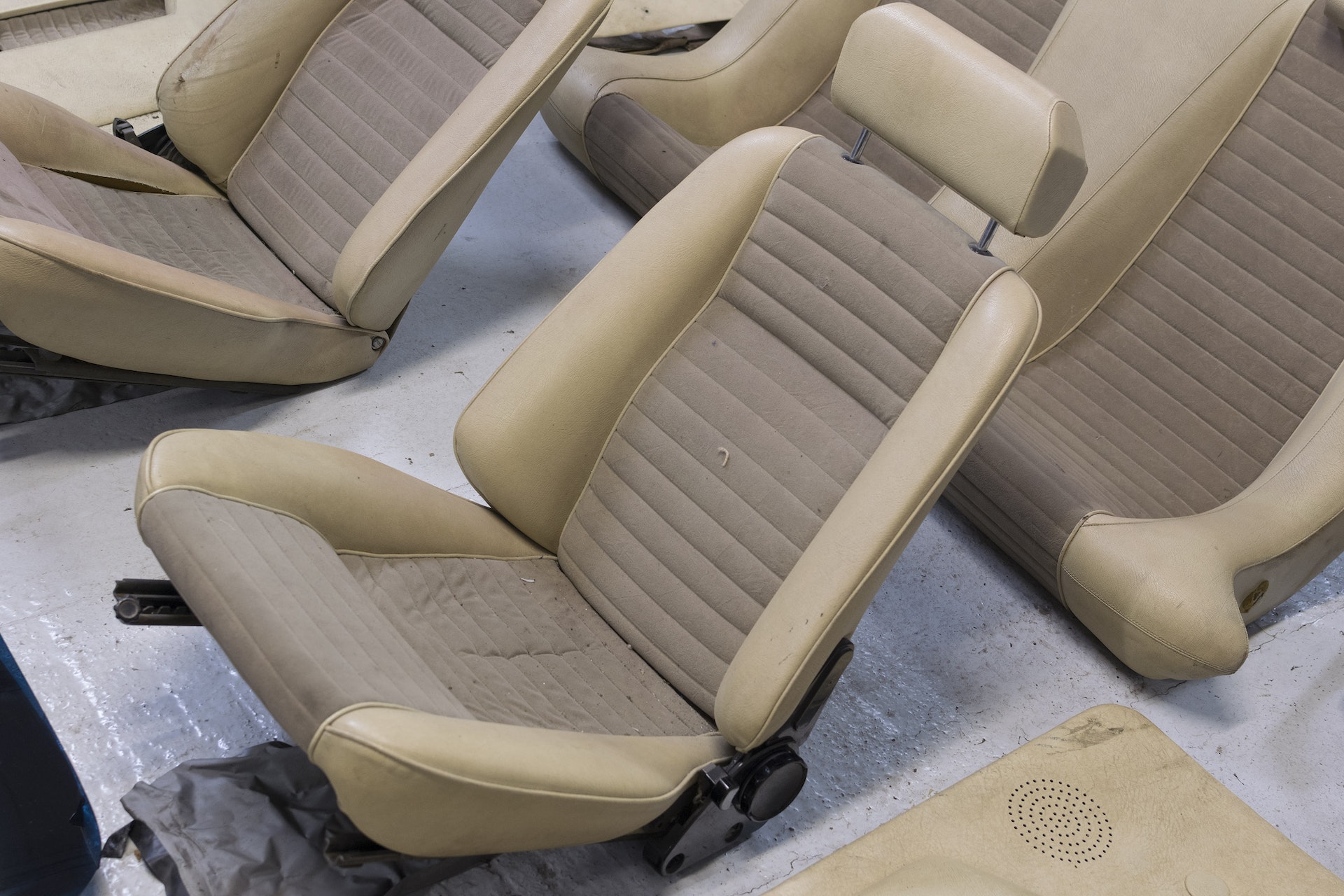 Both front and rear bumpers remain with the car, housing its original UK registration of ‘TPD 330S’. The Carello light lenses are free of any cracks and chips, and the slatted panels for the engine lid and front compartment are also in great shape. Metal trim pieces are in good order, including the window surrounds and sill cover plates, as well as the front grille and the external door handle assemblies. Four new and correct 14-inch alloy wheels were sourced for the car, and they are shod in 205/70 VR14 Michelin XWX tyres. 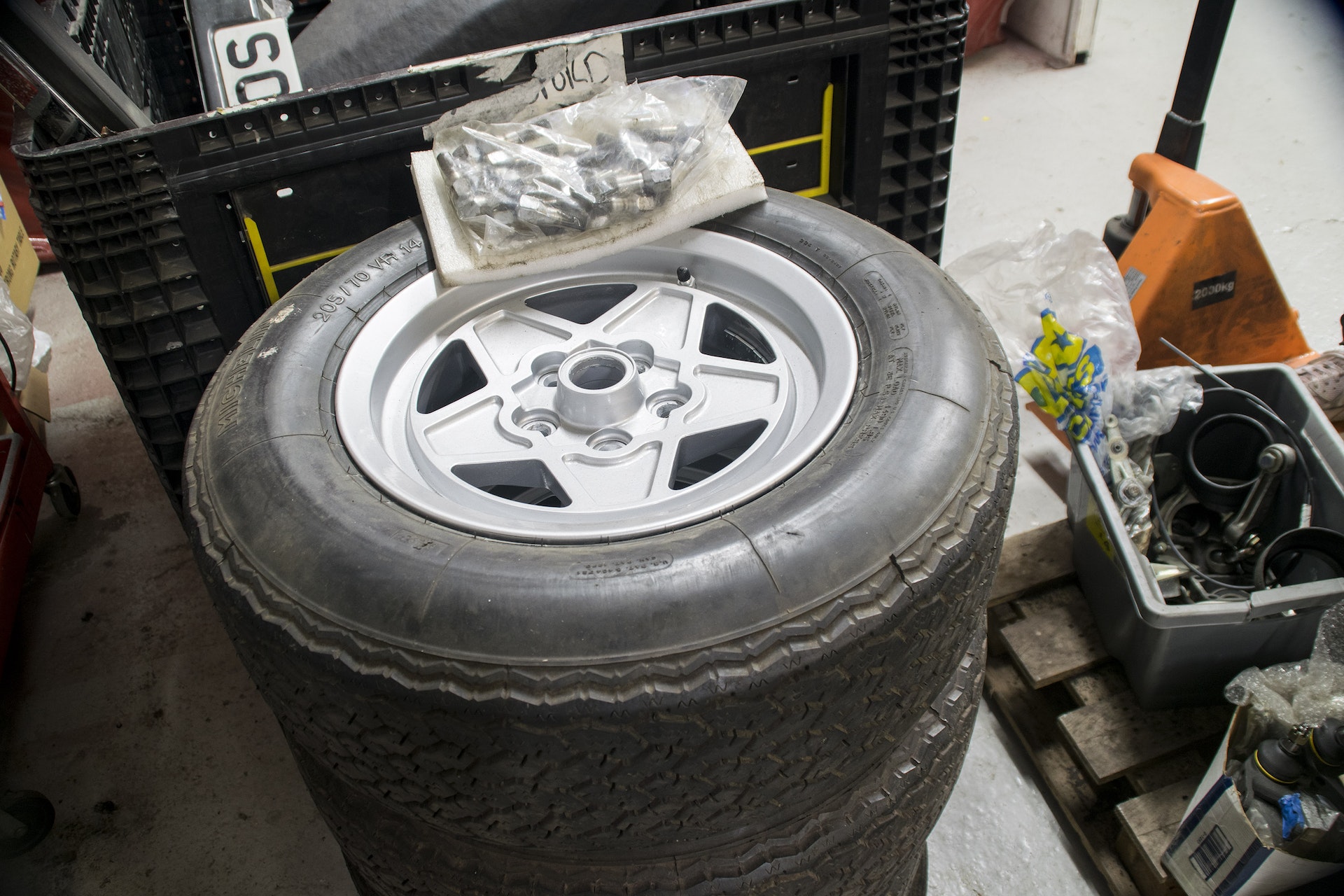 A complete set of seats and interior trim panels is present, upholstered in beige vinyl with brown cloth seat centre panels. The driver’s side bolsters show some wear and discolouration, and there are also splits in the seams on the base cushion. The rest of the upholstery is in serviceable condition, in line with the relatively low mileage from new. 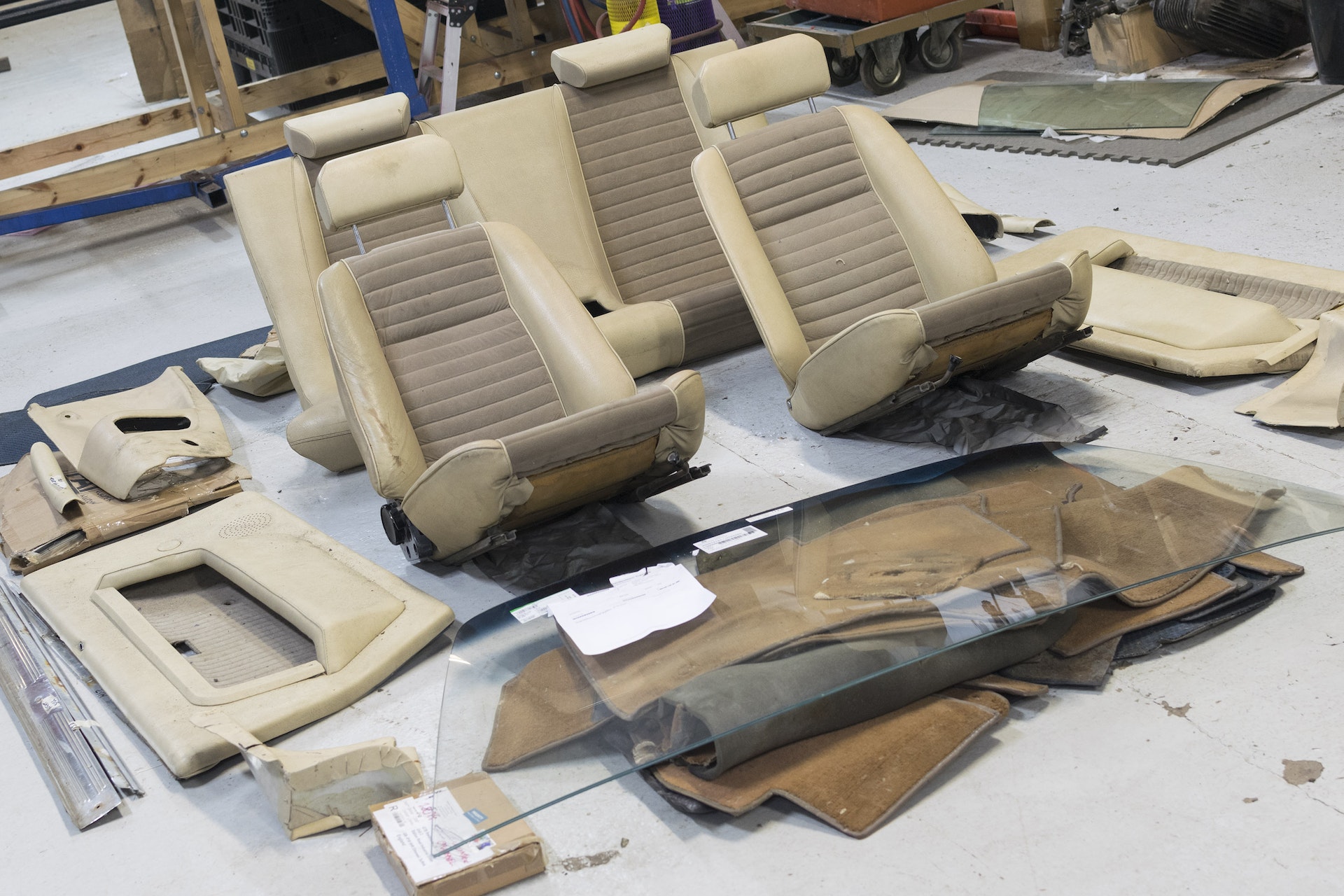 Written on the backs of various trim panels, and stamped into several metal skins, is the car’s unique body number of ‘1400’, showing just how original these parts are. Equally authentic is the complete dashboard and instrument cluster, housing the elegant Veglia Borletti gauges in one of Ferrari’s most user-friendly layouts. The leather trim around the three-spoke Momo steering wheel is worn, but in perfectly usable condition, while the gloss black gear knob is also present and free of damage. The original speedometer remains with the car, which shows just 56,194 miles from new. 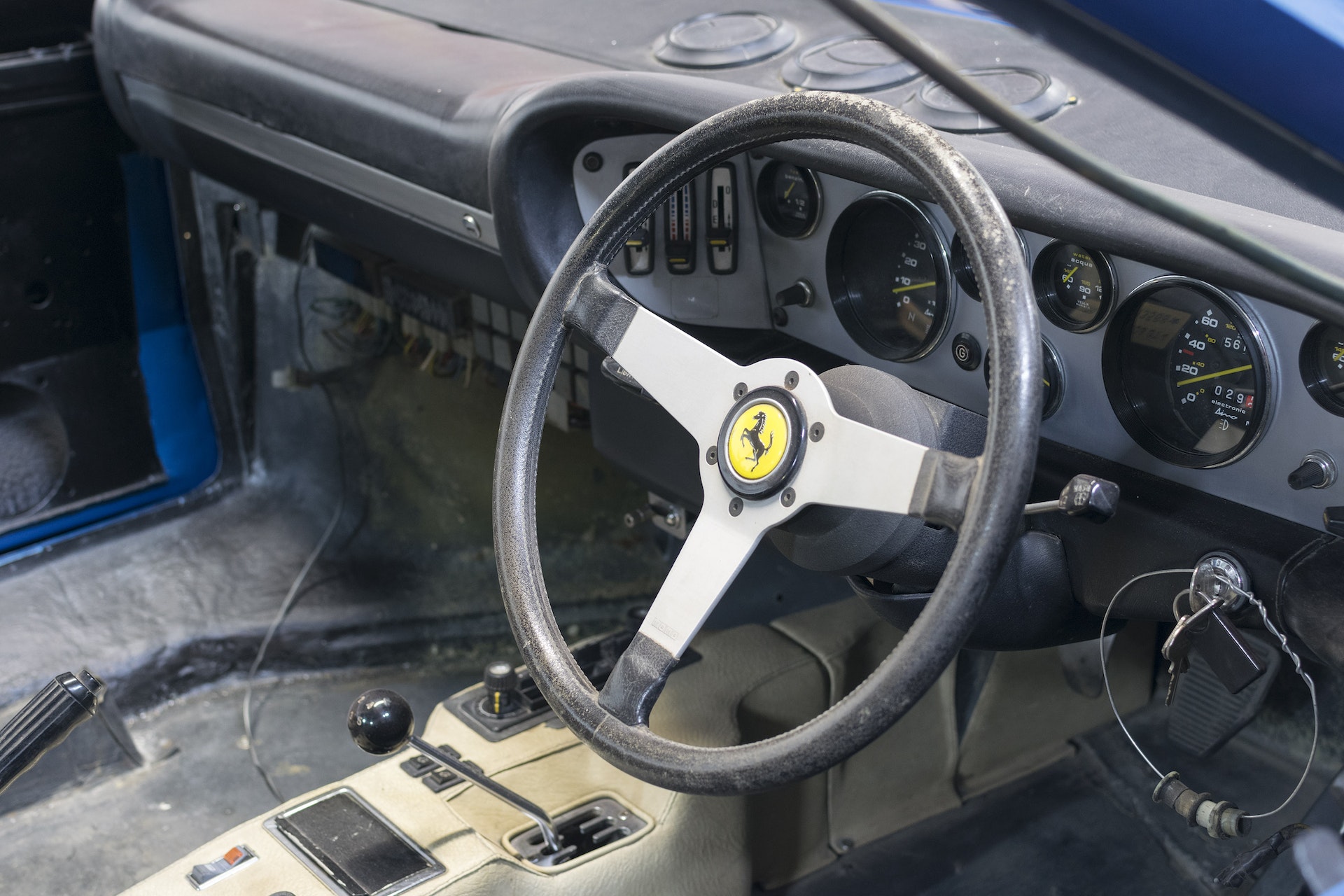 This 308 GT4 retains its original numbers-matching ‘Dino’ V8, which is commonly referred to as displacing 3.0 litres, but is strictly a 2.9-litre engine. Perched between the cylinder heads are the four Weber 40 DCNF carburettors, which feed the glorious flat-plane crank motor. The seller reports that the engine and gearbox were running well before the car was disassembled, with consistent compression and leak-down test results, and excellent synchros. Therefore, it is believed to need nothing more than a comprehensive service and some cosmetic refurbishment. 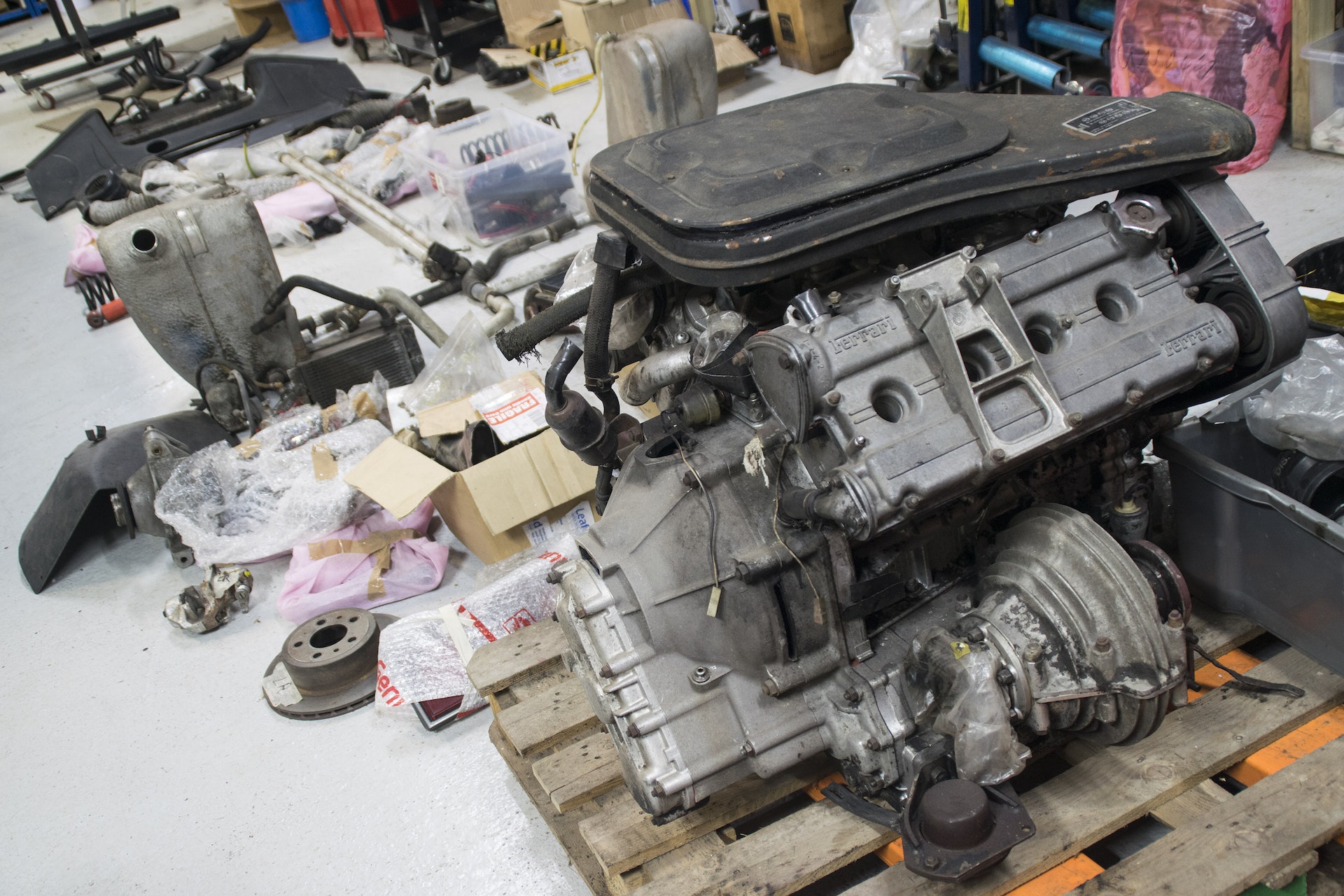 Accompanying the car are numerous old registration documents, which show each of the ownership changes over the last 35 years. There are also a handful of MOT test certificates dating back to 1983, when the mileage stood at 44,263 miles. By 1990, that had risen to 55,504 miles, and shortly after this the car was kept off the road indefinitely, evidenced by the fact that it has not been taxed since July 1991. 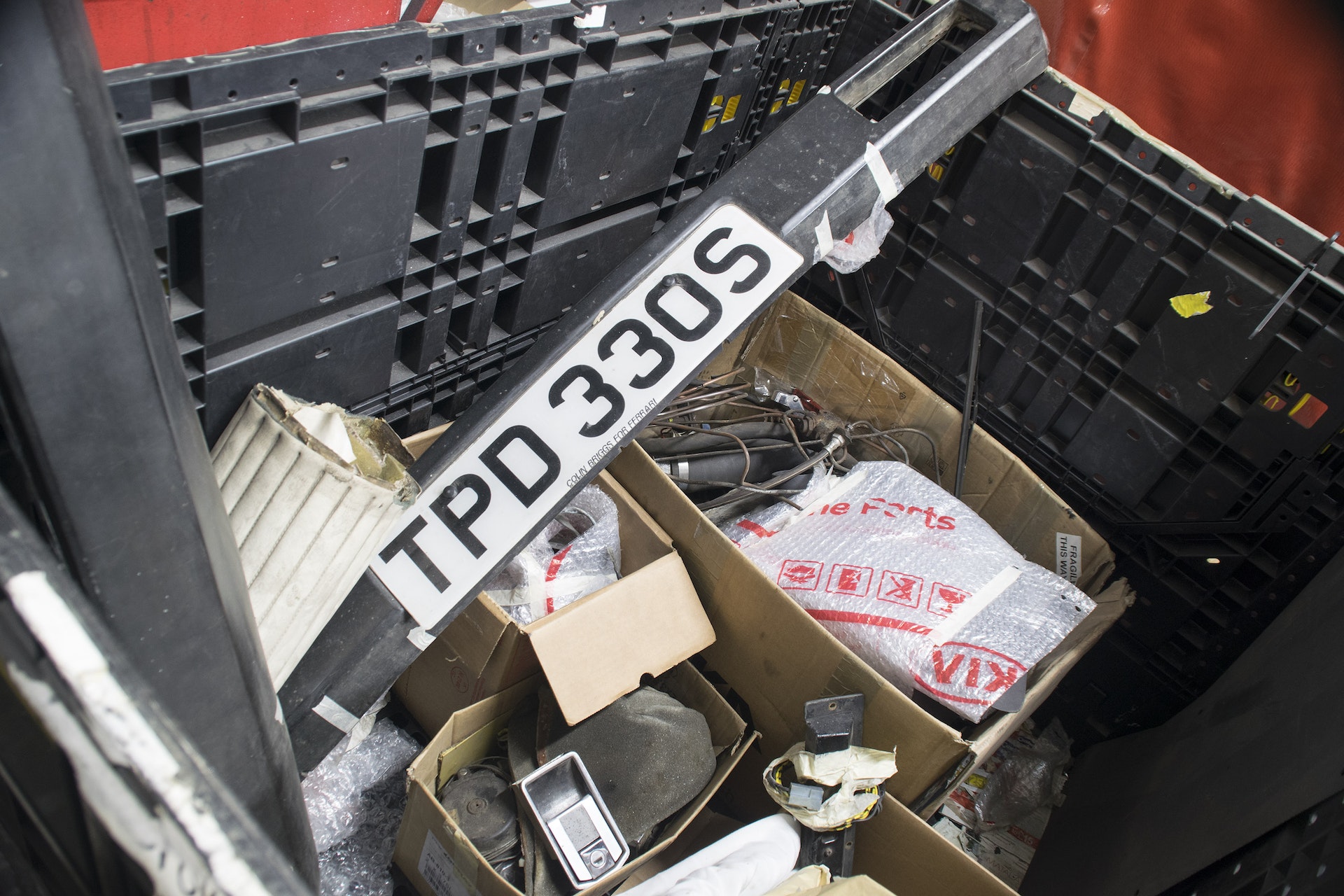 Just 547 examples of the 308 GT4 are understood to have been built in right-hand drive, which makes it almost as rare in this configuration as the Dino 246 GT. While the Bertone styling marked a stark contrast to Pininfarina models in period, it is rightly regarded today as a bold and well-packaged 1970s design. 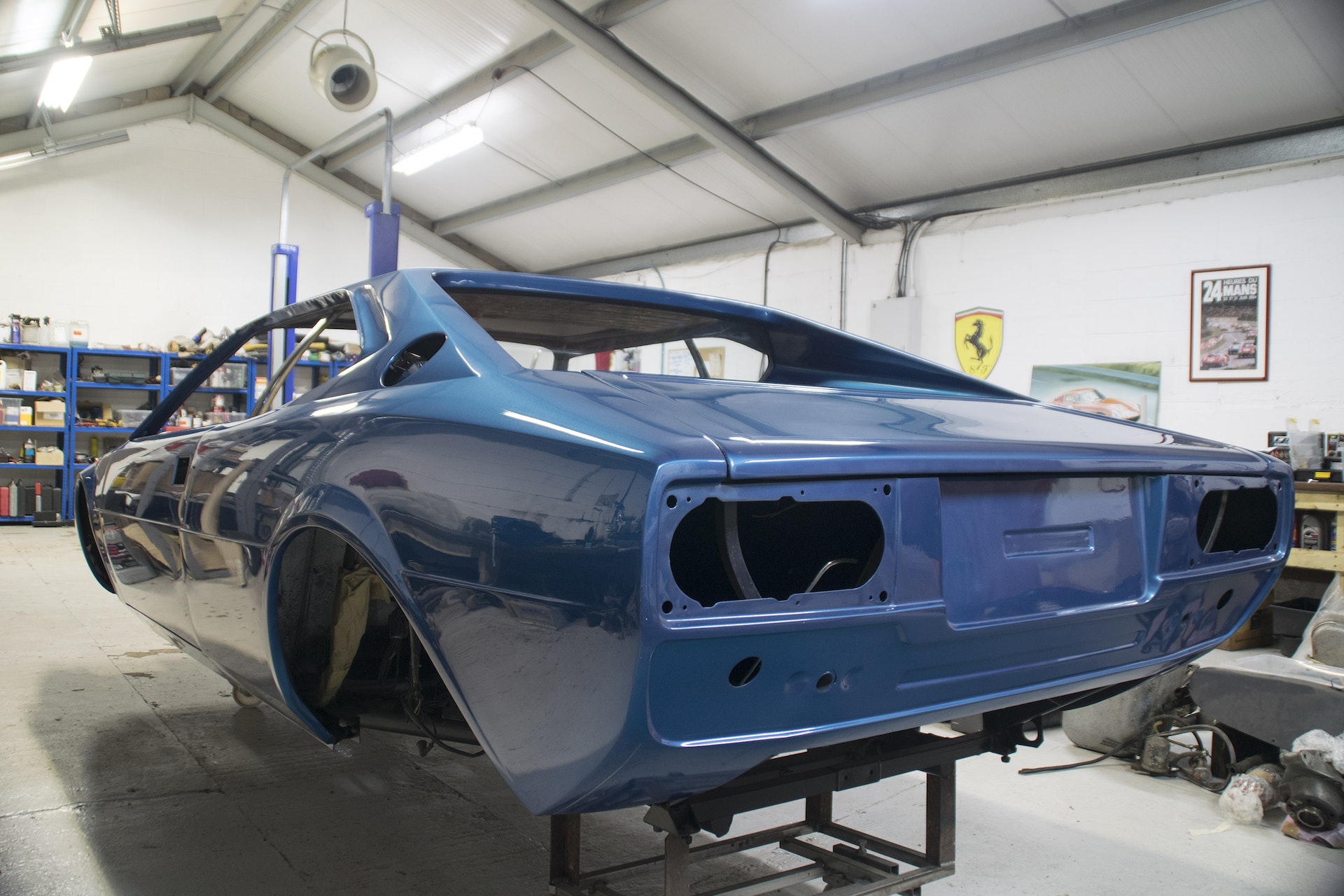 Andrew Frankel recently revisited the 308 GT4 model for Enzo magazine, and concluded: “If, like me, you believe the amount of fun a car provides is calculated by how enjoyable it is to drive multiplied by the number of times it makes you feel inclined to drive it, the 308 GT4 remains one of the most underrated Ferraris of all”. 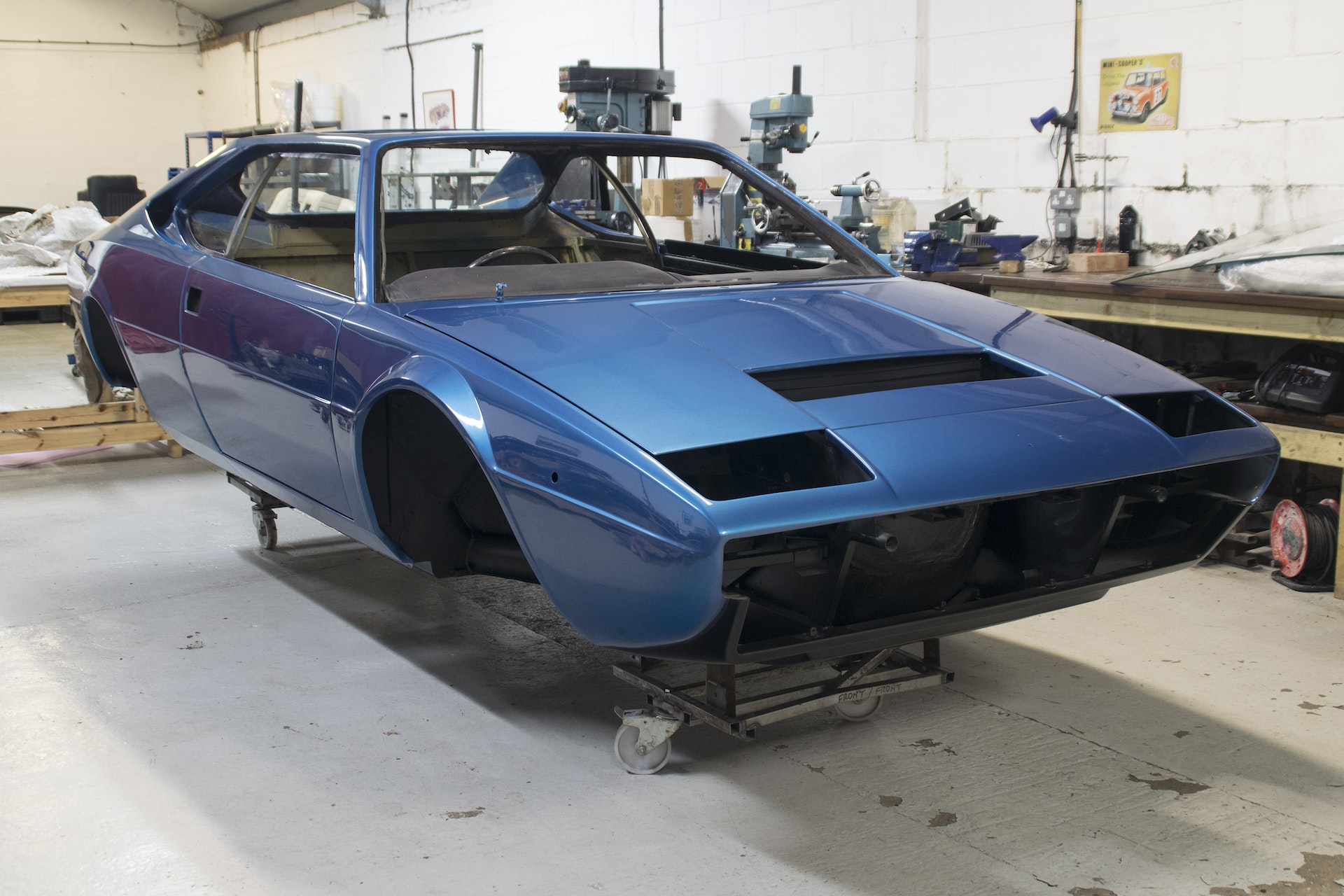 This Ferrari Dino 308 GT4 represents a compelling opportunity to acquire a straightforward project, boasting a recent bare-metal body and chassis restoration that has been done to the highest standards, along with a fresh respray in a terrific period-correct hue. Few GT4s have ever benefited from such a significant investment in their renovation, and once complete, there can be no doubt that this example will be among the very best existent. The options for finishing this car range from a mechanical refurbishment and reassembly, through to a meticulous concours-quality rebuild. All that is required is a dedicated and passionate enthusiast to make the decisions.