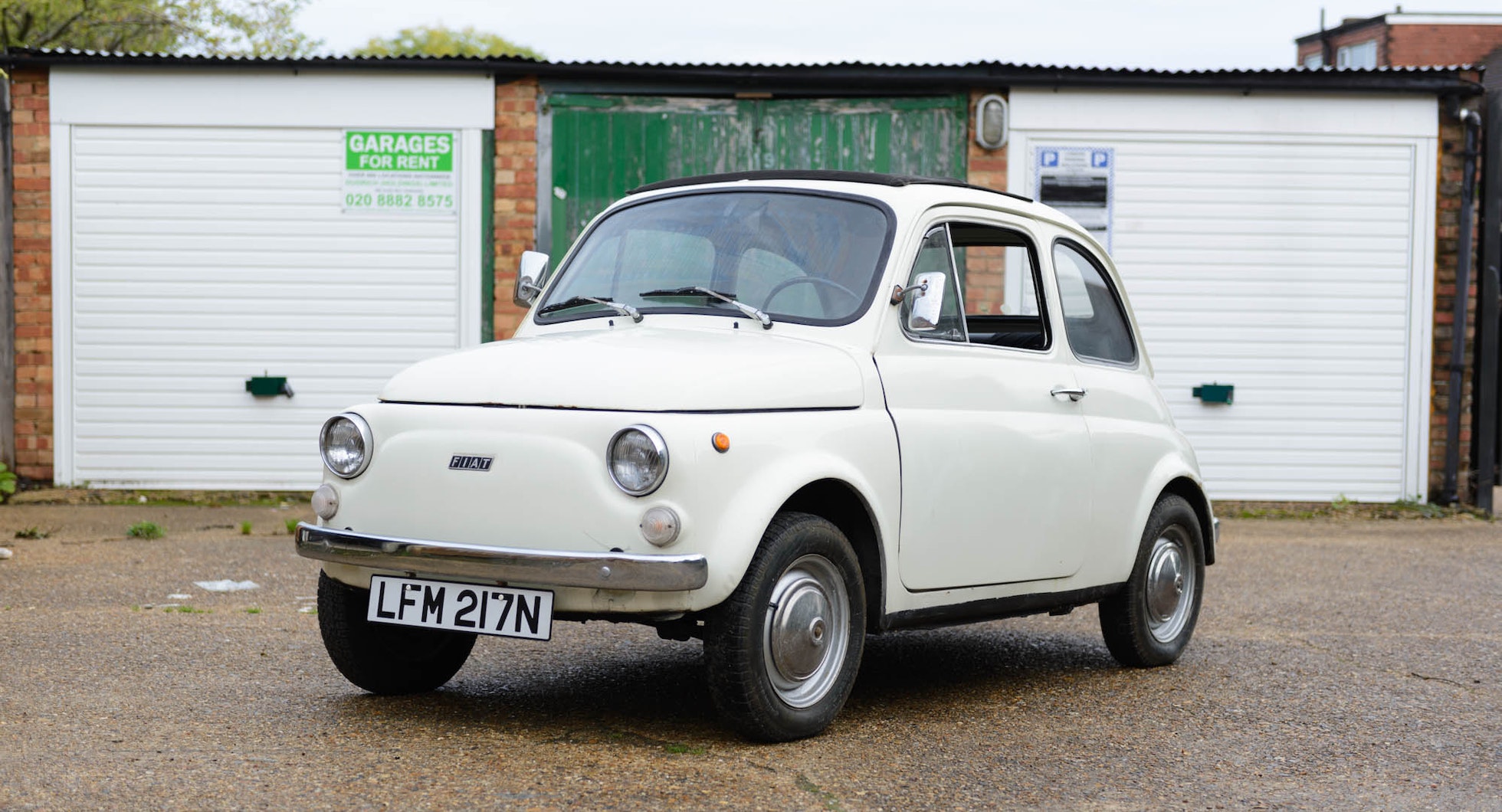 This 1975 Fiat 500 R is an iconic Italian classic, presented in good mechanical condition and ready to be smartened up by its next owner. Being an R or ‘Rinnovata’ (meaning ‘renewed’ or ‘updated’), it is powered by the larger 594cc engine developed by Abarth, and driven through the rear wheels via a four-speed manual transmission with syncromesh. The odometer shows 6,028 miles, and this is believed to be the mileage since a previous restoration. 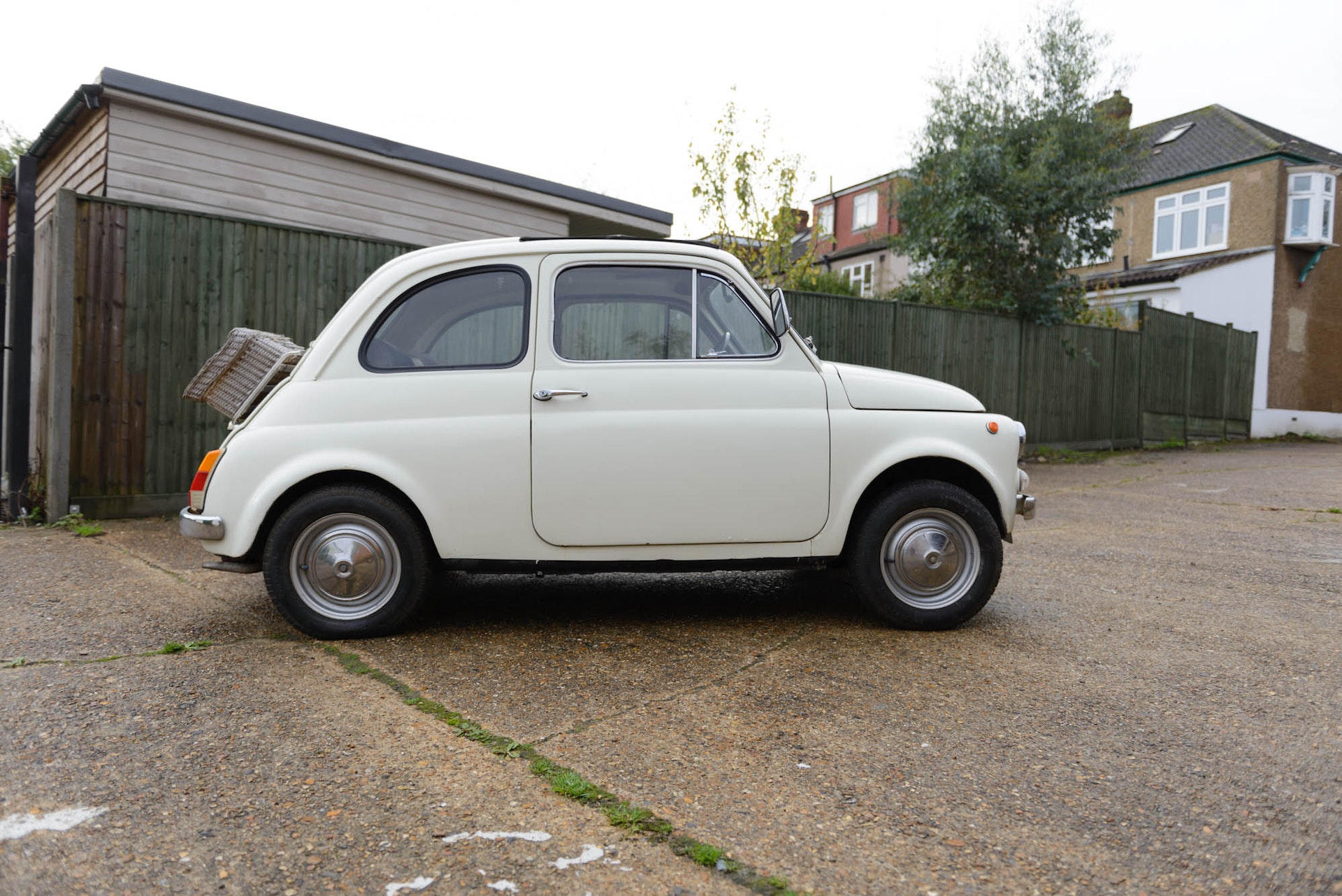 As a 1975 example, it comes from the very last year of the original ‘Cinquecento’ production, and is believed to have been delivered new to the Netherlands. It has been the subject of a prior restoration, though this is understood to have been carried out around the early 1990s, and there are 80 period photos of the work in the history file. Since then, time and exposure to poor weather have both affected the little Fiat’s cosmetic condition. 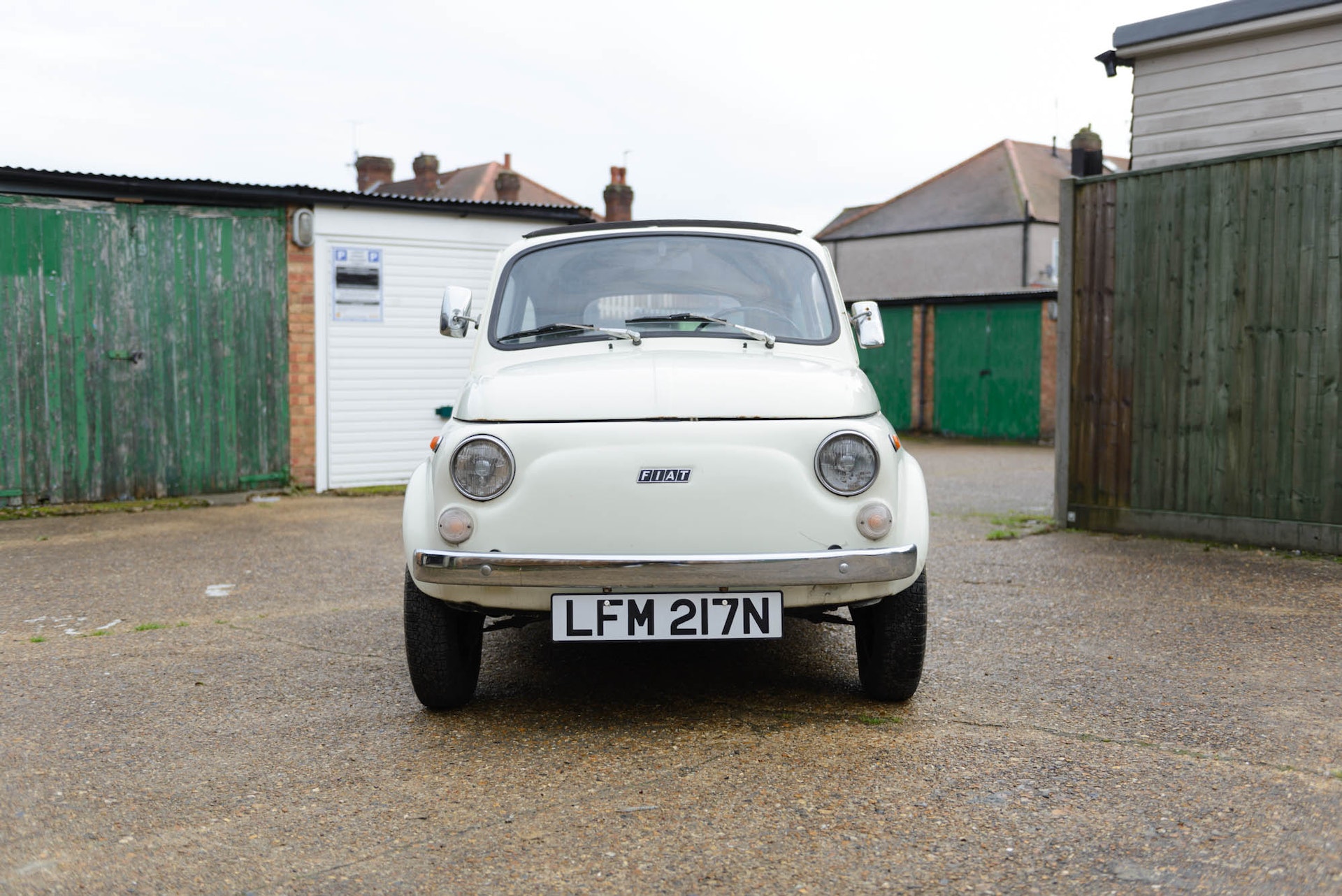 In more recent years, it was imported to the UK and registered here in July 2015. The 500 has been owned by the vendor for the last three years, and having not had the time to improve and enjoy the car as they had hoped, they are now offering it to a new owner who could return it to its former glory. 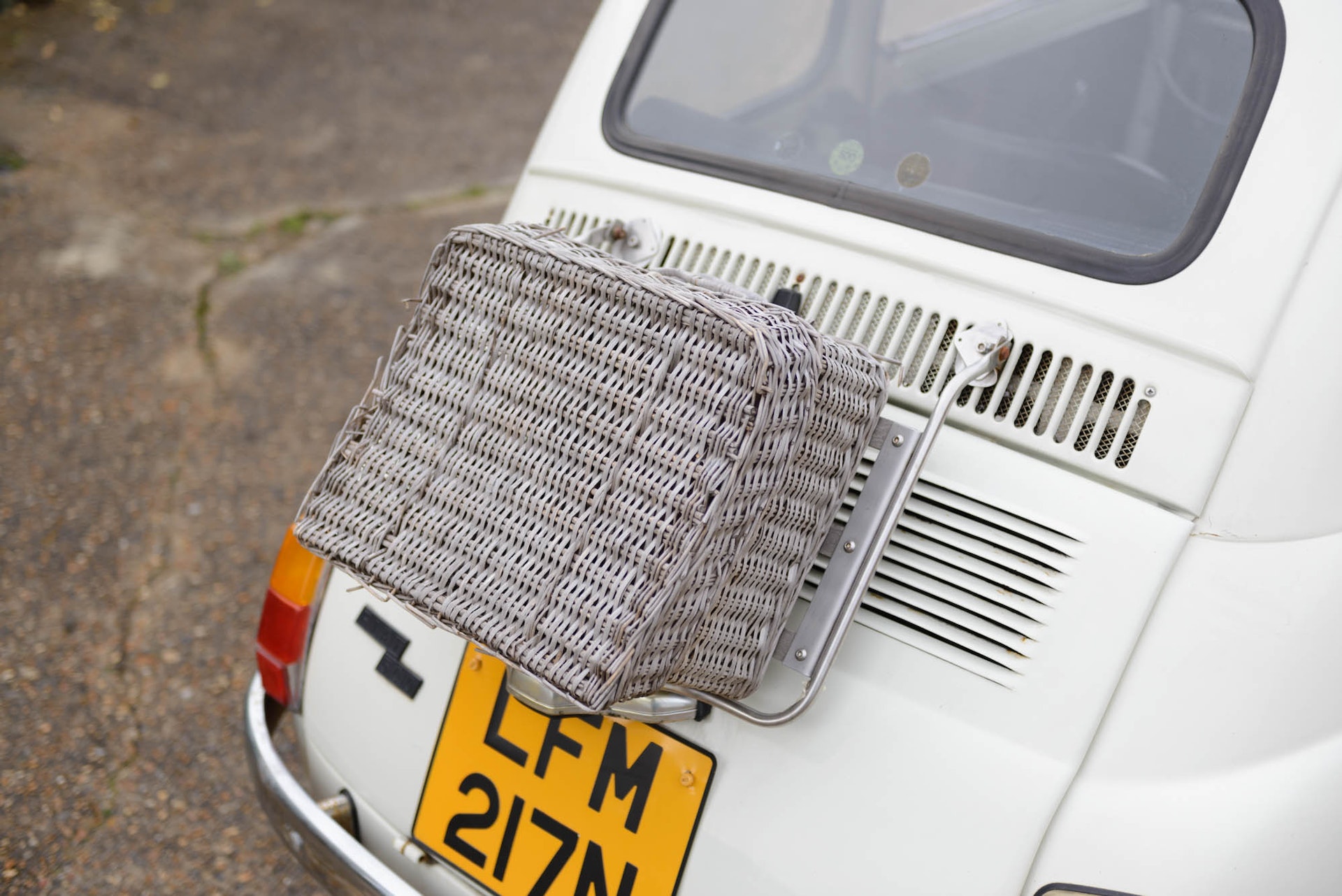 Finished in a white hue, the paintwork is in fair condition given it has been around 30 years since it was last resprayed. There is a generally solid appearance across most panels but with some corrosion present at the edges of the body panels and around the wheel arches. There are also cracks and bubbling in the coat in various places. 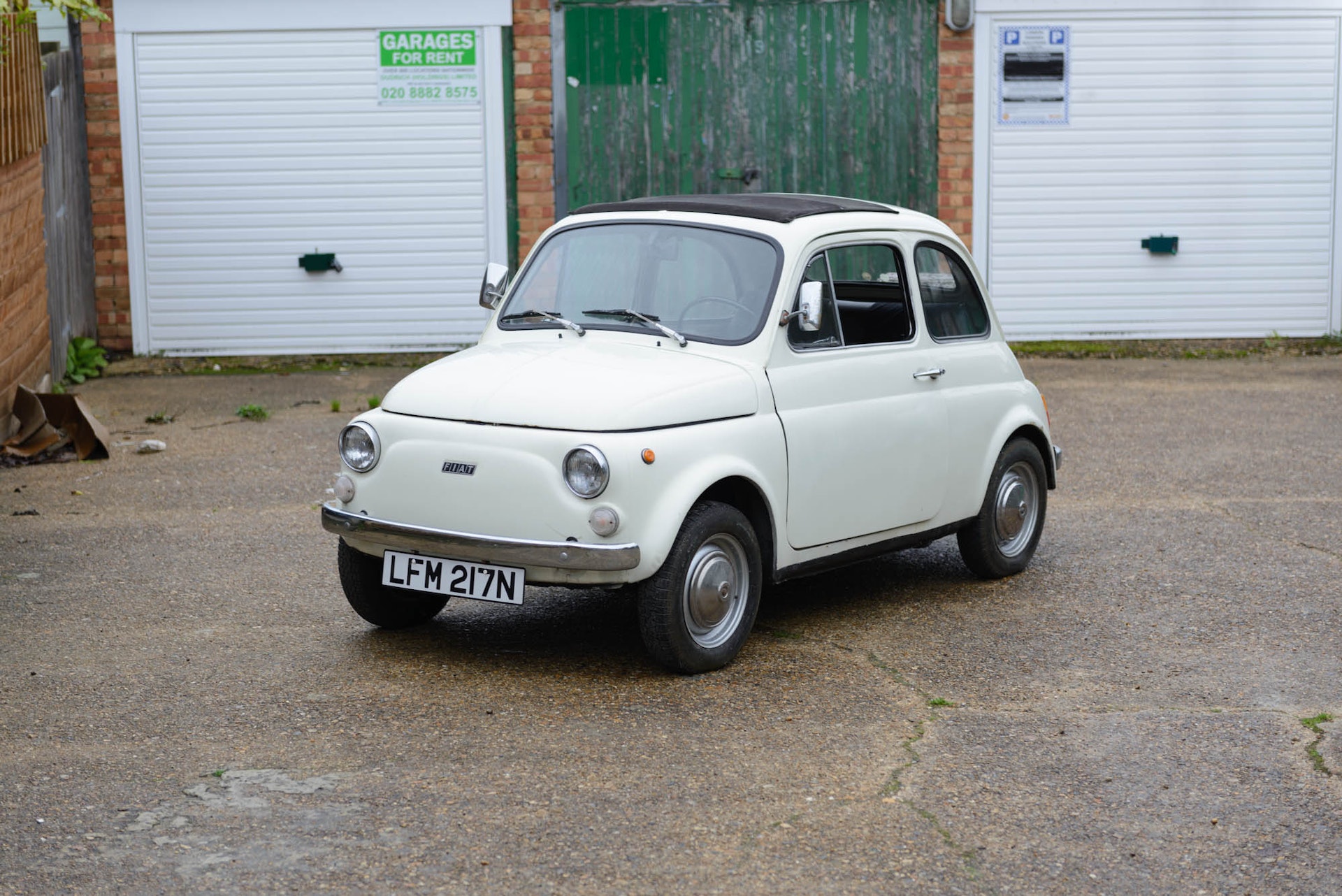 There is some surface corrosion on the driver’s side wing mirror and the rear bumper, and blemishes on the engine lid handle, but otherwise the metal and chrome work around the exterior is in presentable order. At the back of the car, a charming luggage rack is also fitted, which includes a wicker basket. 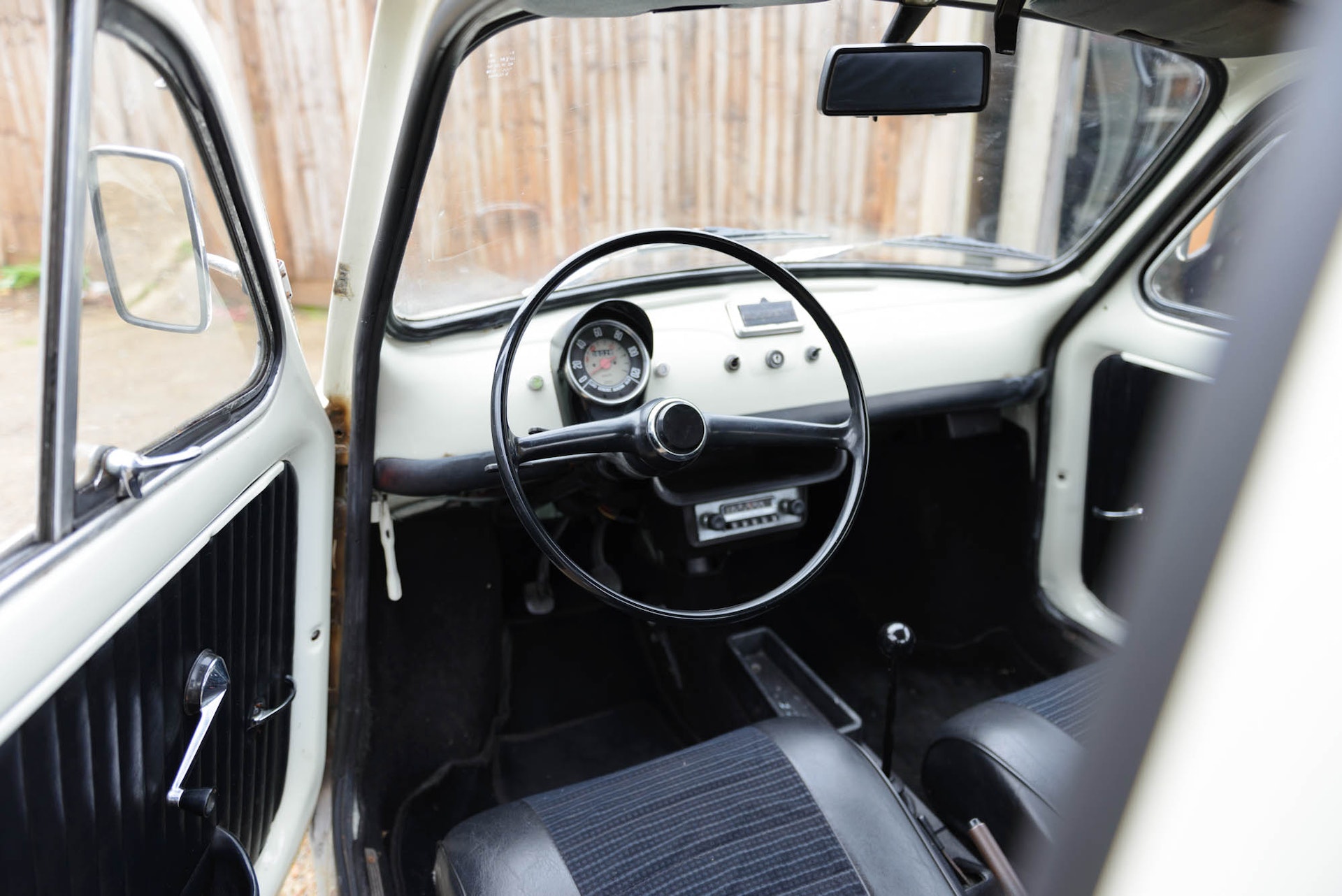 Inside, the upholstery is in good condition, trimmed in a mix of black vinyl and dark blue chequered cloth panels. There is some minor damage on the side panel of the driver’s seat base where the vinyl has worn through - a common affliction on these classic 500s. 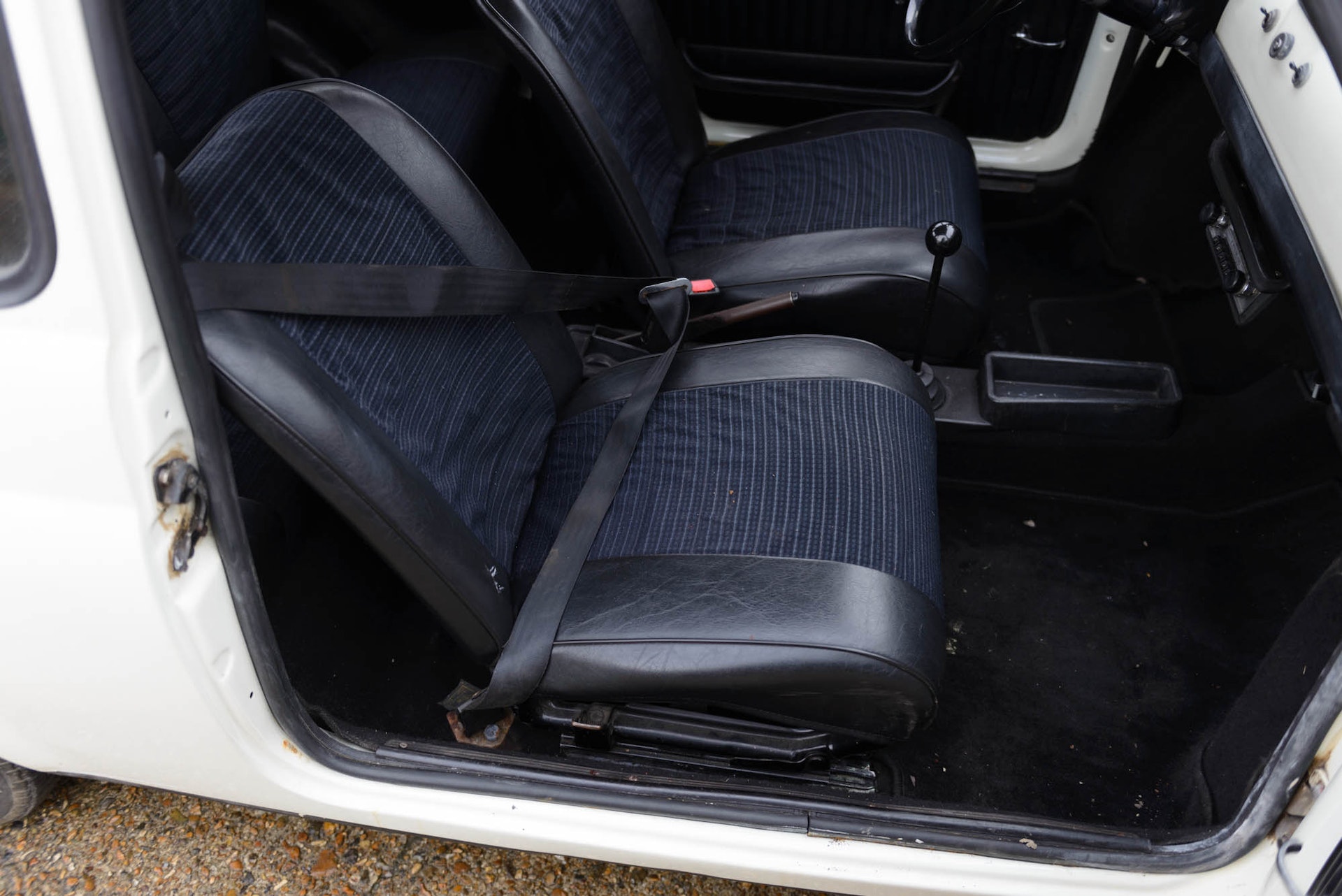 The dashboard is simplicity itself, with just the centrally-placed Veglia Borletti speedometer ahead of the driver, while the thin-rimmed two-spoke steering wheel is wonderfully elegant and in great shape. A period Weltklang radio is fitted below the central storage cubby, which reportedly works intermittently but does suffer from a lot of static noise. 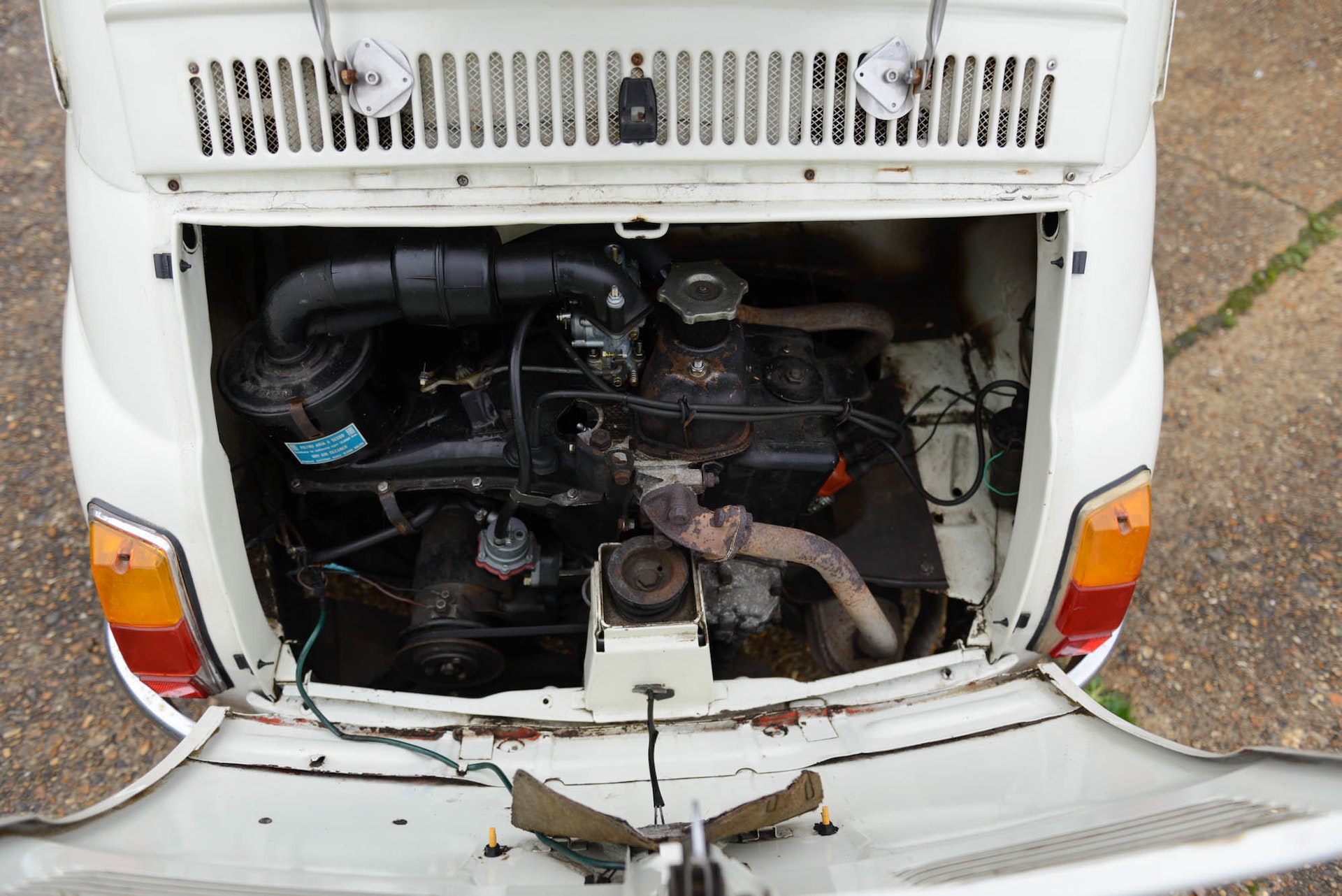 The half-length sunroof opens, closes and fastens as it should. The upholstery on the back seat is in equally good condition, and is accessed by tipping the front seats forward. Carpeting is in sound order throughout, and is protected by a set of tailored overmats. The headlining panel over the rear bench needs renewing, or at least re-gluing. 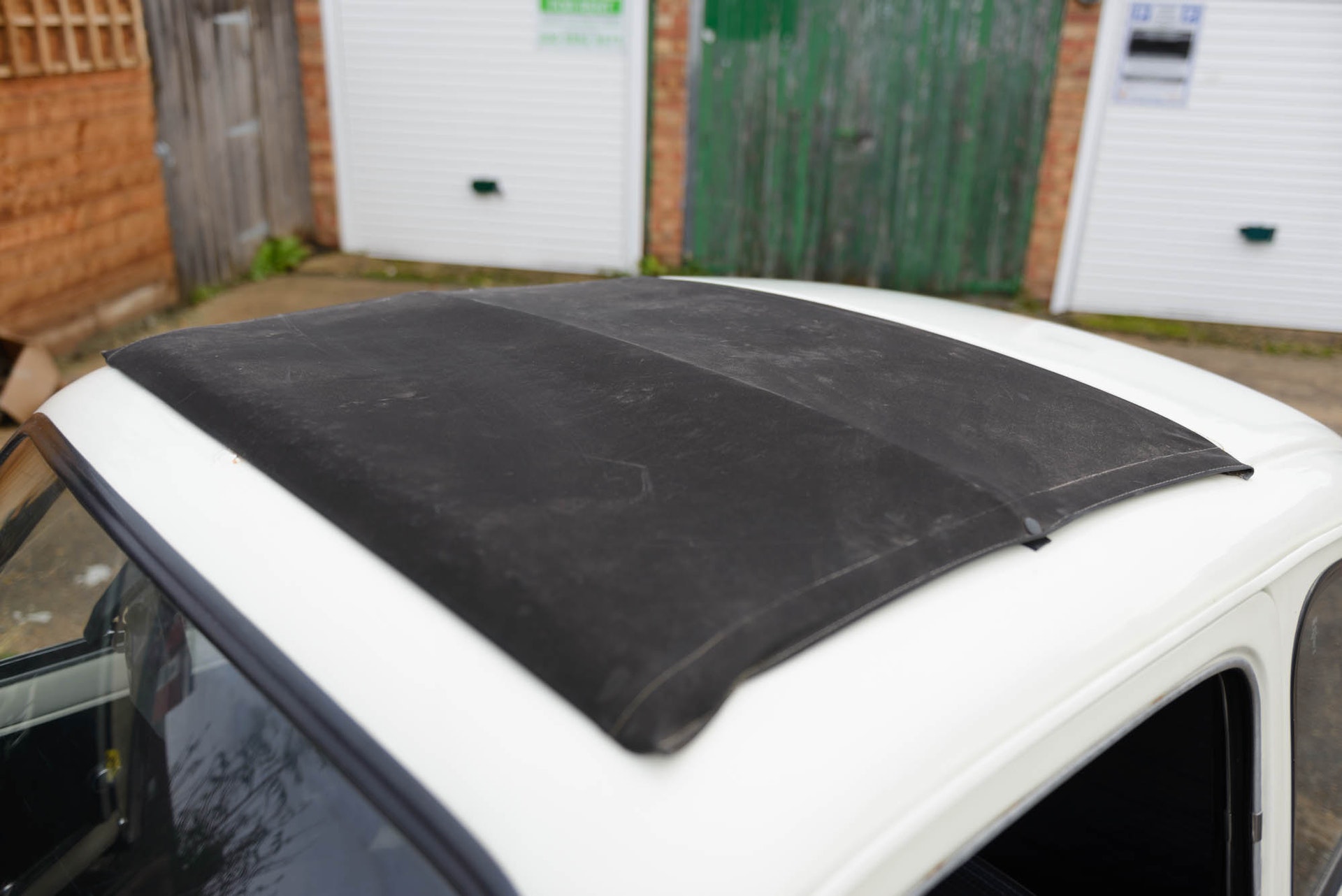 Opening the panel at the back of the car reveals an engine bay that would benefit from a good cosmetic tidying, but the Fiat is reported to be in good overall mechanical condition. Given the vendor’s lack of use in the last year in particular, it will almost certainly need a fresh battery and fuel to get up and running well, but there are no known faults. 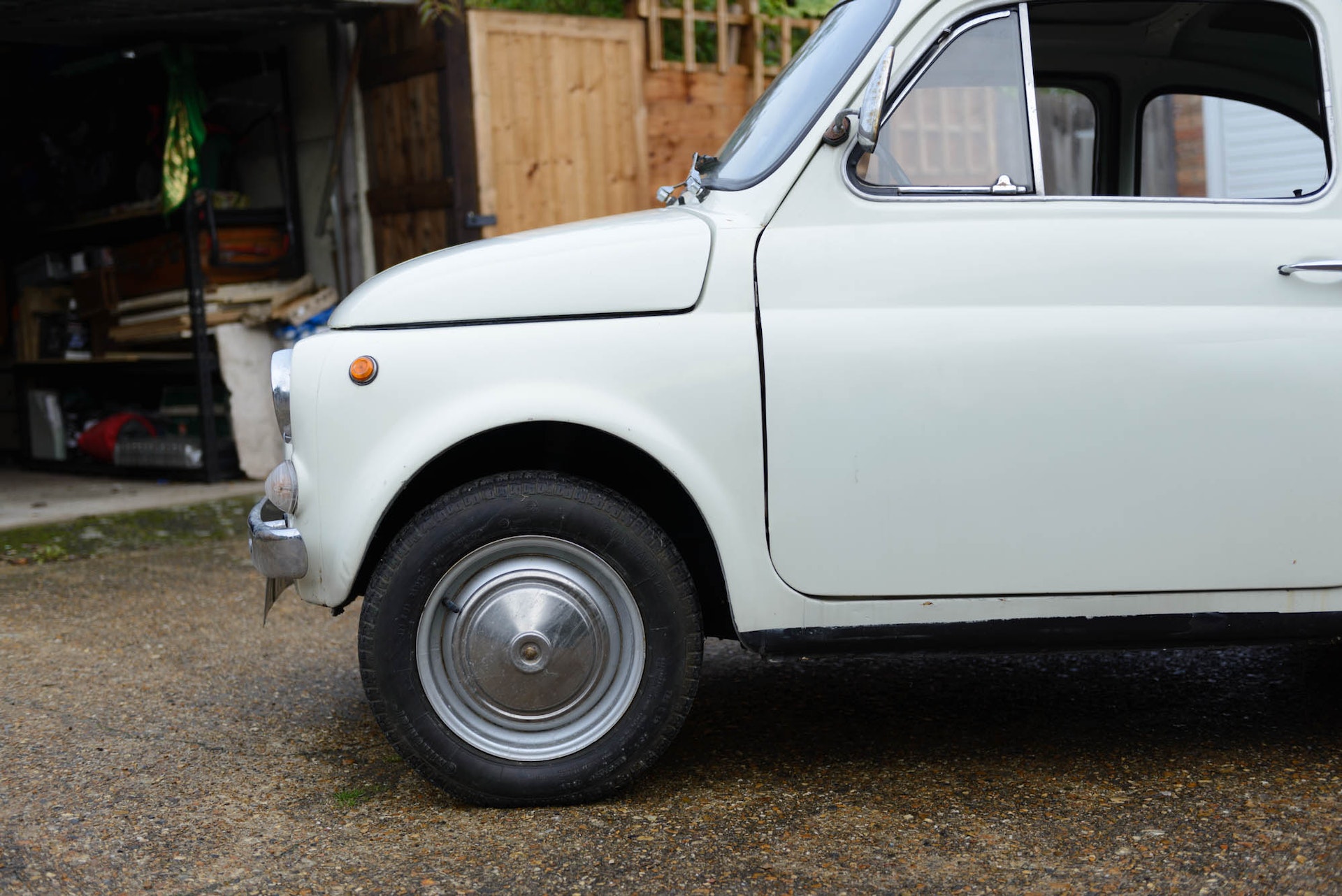 In May 2016 it was given an overhaul by Crown Classic Cars in Twickenham, which included a full service, a replacement carburettor and associated tuning, renewal of two wheel cylinders and brake shoes, fresh spark plugs, helicoil kit and ignition kit. Adjustments were made to the starter cable, hydraulics and fuel system, and it was given a thorough check over and road test. 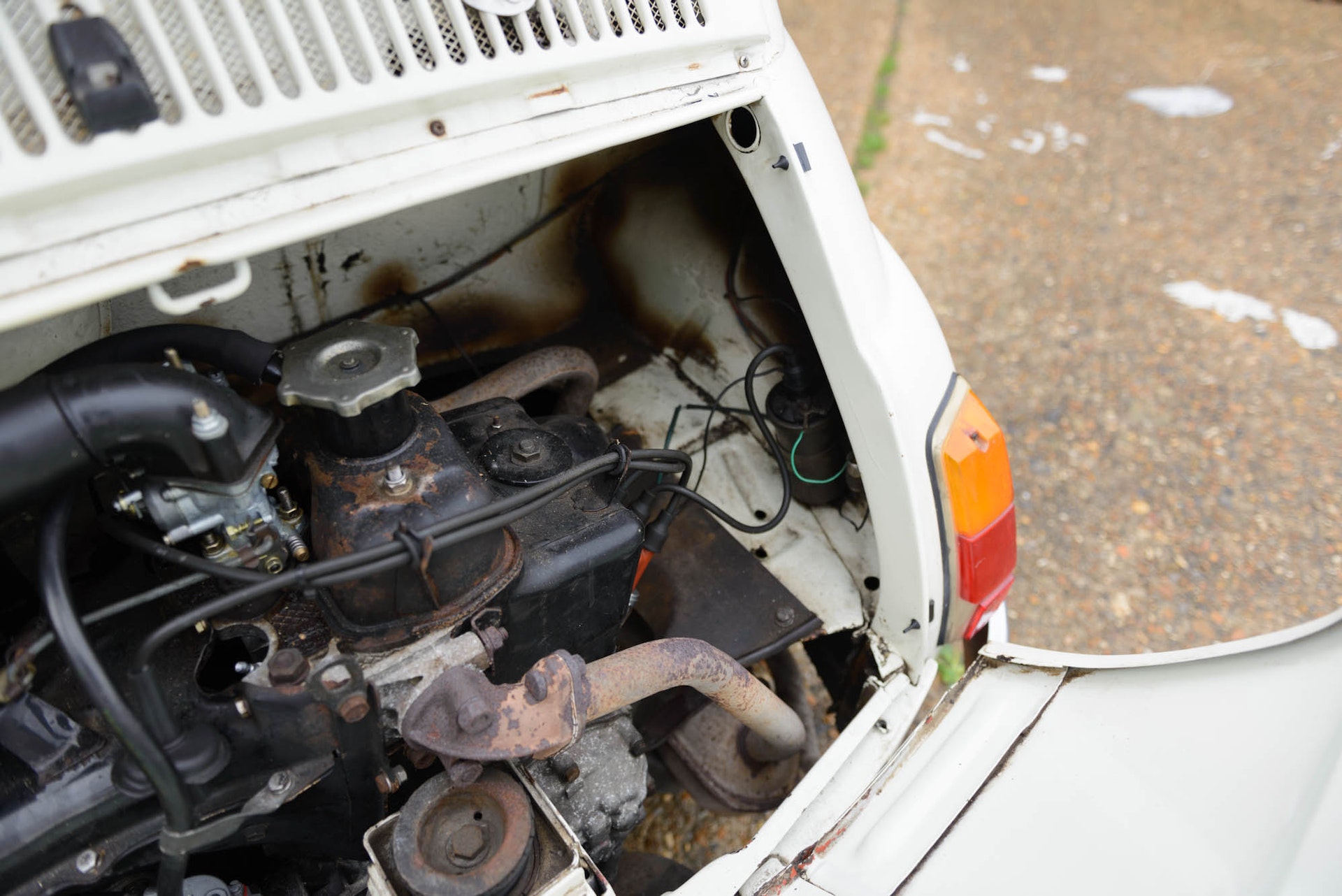 Its last MOT was in May 2016 at 5,996 miles, which resulted in a clean pass with no advisories. Since then, it has been exempt from the annual MOT test requirement. In the UK, this Fiat 500 R is classed as a historic car, so is also exempt from vehicle tax. The wheels are shod in matching vintage-style 125 R12 Continental tyres, which all have plenty of tread remaining. 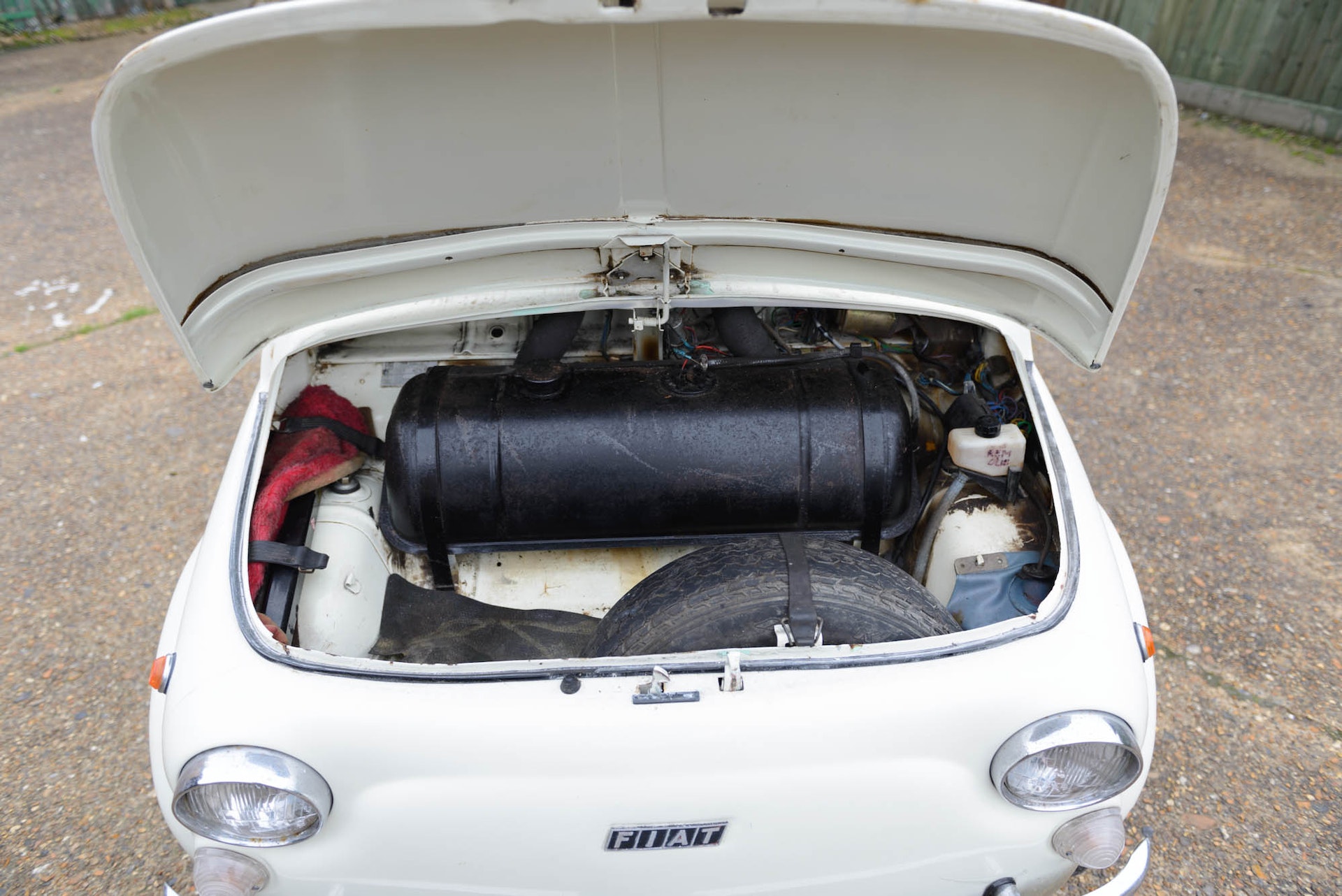 This Fiat 500 R represents a great opportunity to acquire an instantly-recognisable classic that is now in need of some care and attention. A mechanically sound car that is presented honestly, it also benefits from being an unmodified example that retains its original Italian charm.