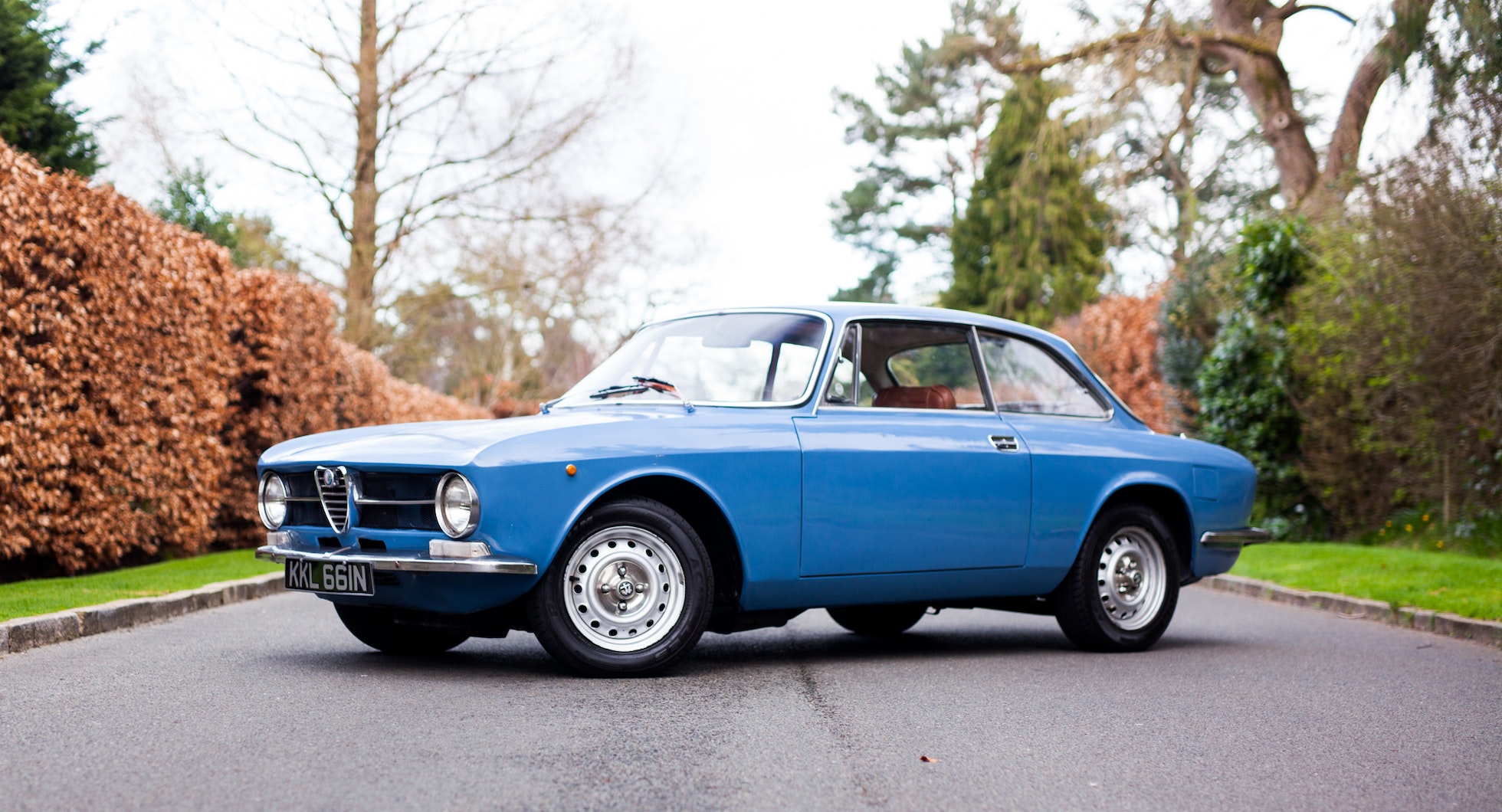 This Alfa Romeo GT 1600 Junior is a sound example of a delightful Italian classic, presented in strong mechanical condition. Its engine is the charismatic 1.6-litre twin-cam fed by a pair of Dell’Orto carburettors, producing around 110bhp, with rear-wheel-drive via a five-speed manual transmission. The odometer shows just 61,819 km (38,412 miles). 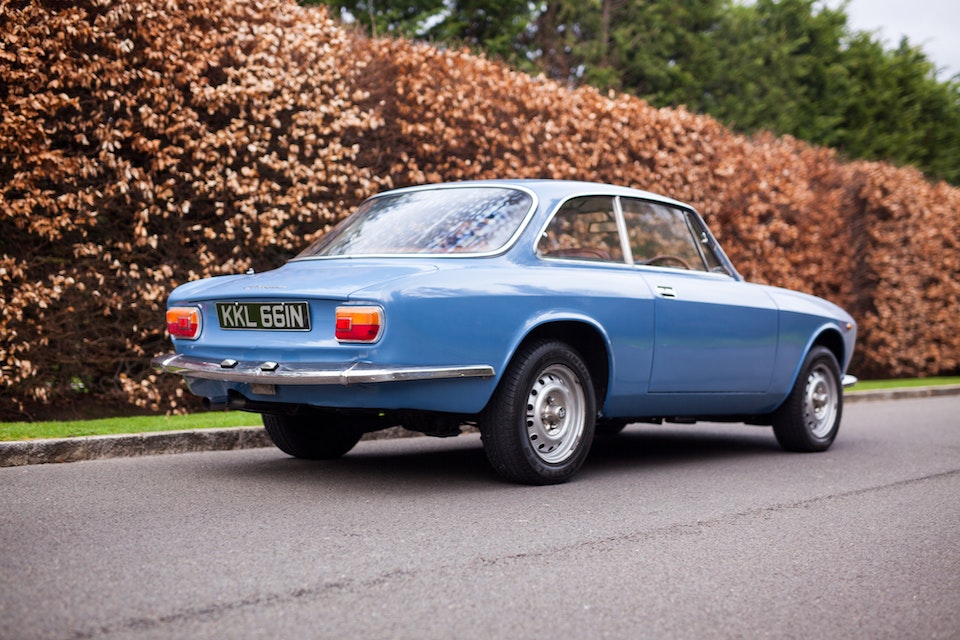 An original right-hand drive car, this GT 1600 Junior was first delivered to South Africa, which is why the speedometer and odometer remain in kilometres. In the mid-1990s, the Alfa Romeo had been de-registered by a previous owner to avoid paying the annual registration fee. As the previous registration was not continued, the car had notation of ‘built up’ applied to its South African title. However, this is an original GT 1600 Junior that retains its factory chassis number. 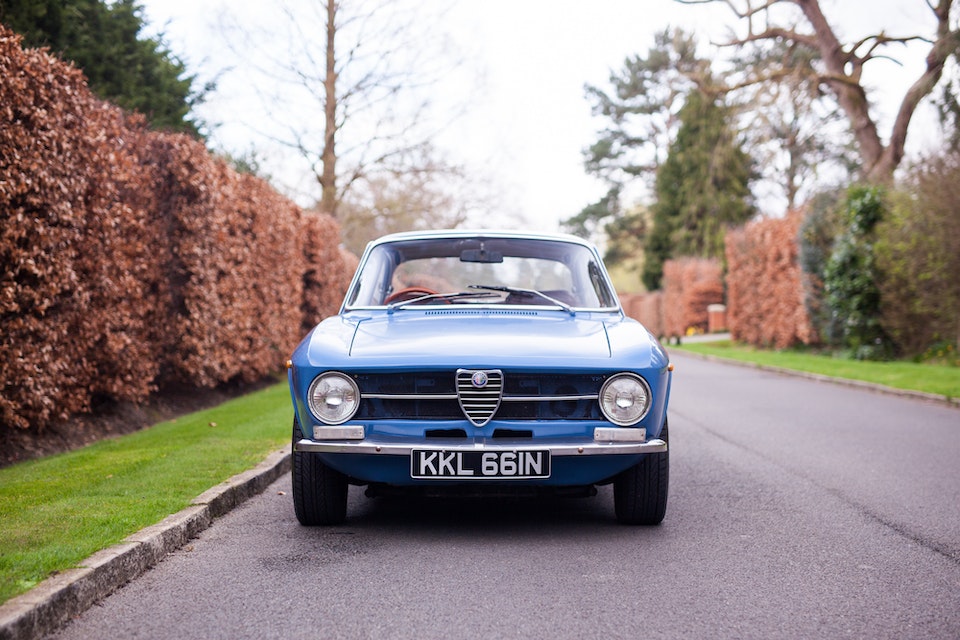 It was imported to the UK in 2018 by the seller, who then set to work putting together the paperwork evidence for the DVLA in order to register the vehicle. A letter of authenticity was obtained from the Alfa Romeo Museum, via Ken Carrington at the Alfa Romeo Owners Club, and he confirmed the common reason for the ‘built up’ notation as described above. It is now registered on its factory chassis number, and with the year of manufacture as 1975. Since then, it has undergone a programme of refurbishment, and the seller has covered around 250 test miles. He is now offering this car for sale to help fund progress on a project car in his collection. 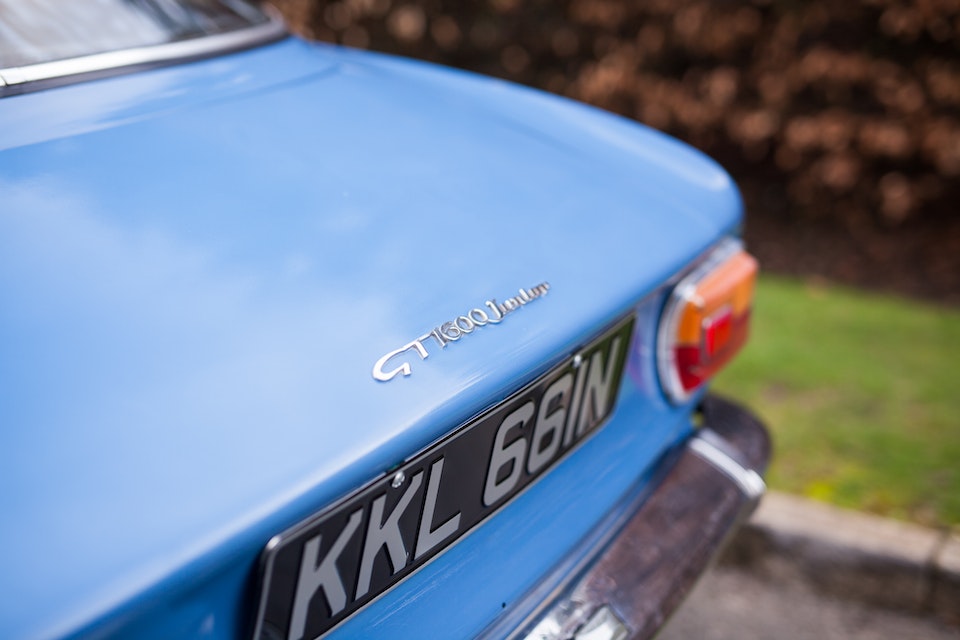 The bodywork of this GT Junior is in sound condition, with good panel gaps and shut lines down the flanks in particular. The seller describes the paint finish as being in fair condition for its age. At some point prior to its arrival in the UK, it evidently had a blow-over respray with the aim of smartening up its appearance. While it looks good from a distance, when viewing the car up close, it presents with ‘orange peel’ imperfections and minor chips and cracks. 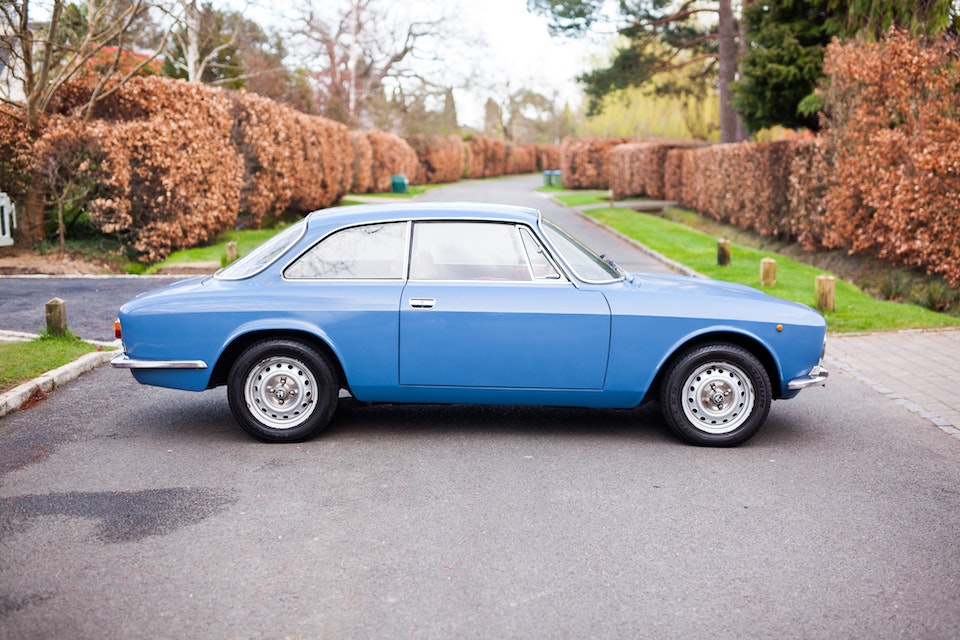 There is a crack in the nearside tail light, but otherwise the lenses appear to be in good order. All of the brightwork also presents well. The window seals around the body are sound, though the door rubbers have perished in places and will need to be renewed. It sits on a set of 14-inch sport steel wheels, which have some minor chips and kerb marks around the rims, so would benefit from refurbishment in due course. 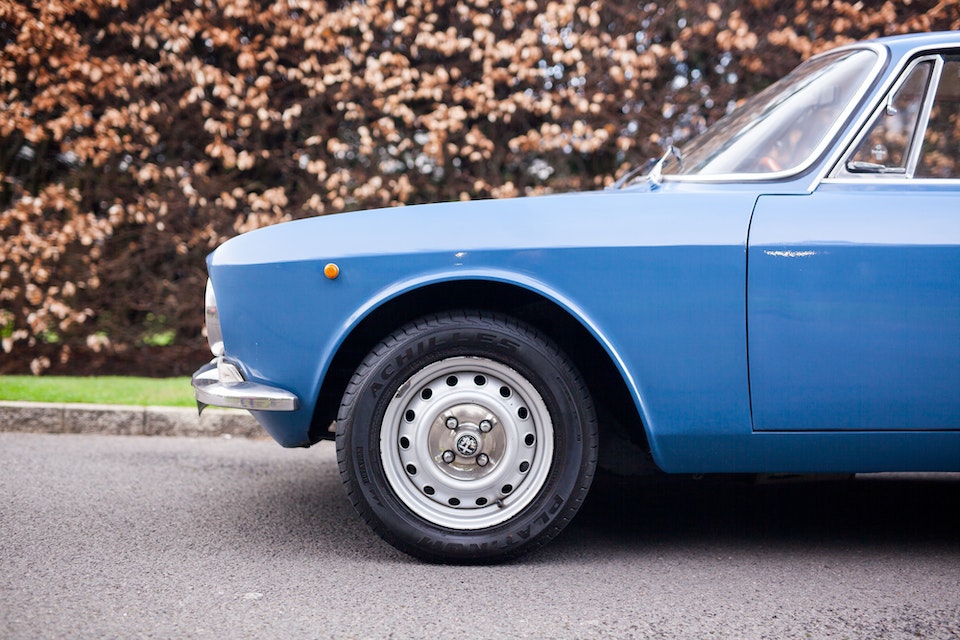 Inside, the dark brown ‘Cinghiale’ vinyl still looks superb. It has an elegant patinated appearance and is believed to be the original upholstery. There is even a small cigarette burn on the driver’s seat base bolster, which has been left as-is. Since arriving in the UK, the dashboard has been trimmed in leather. 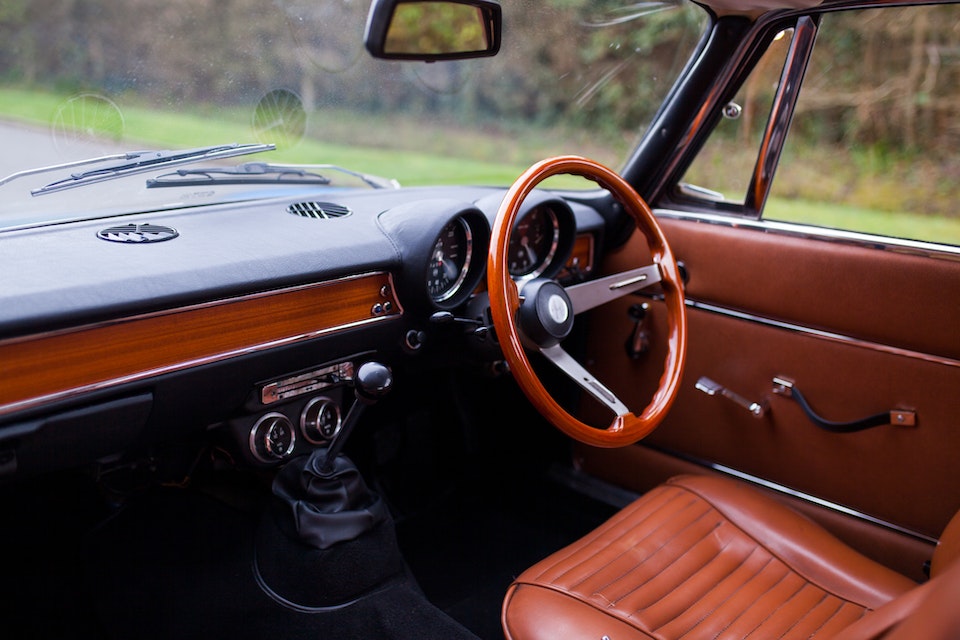 The seller has also had a new carpet set fitted, and new inner door panel cards installed. The pedal box seal and brackets have also been renewed. Ahead of the driver is a deep-dish Nardi Personal wood-rimmed steering wheel. The heater is not currently working, but all other necessary switchgear functions as it should. 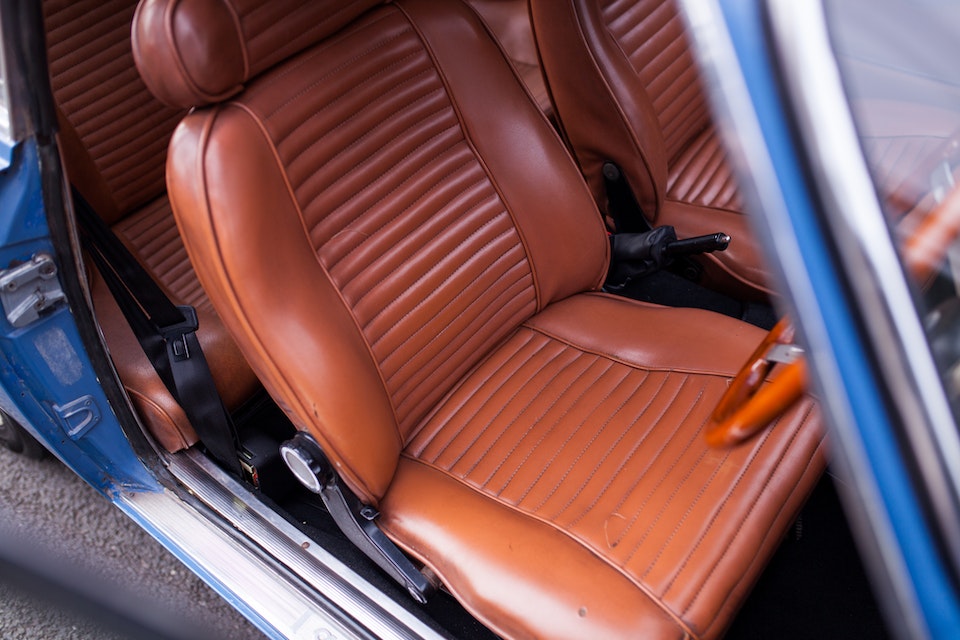 After importing the car to the UK, the seller put the car through an MOT test in early June 2019 to check what items would need repair or replacement. The braking system was found to be needing an overhaul, there were various worn suspension bushes and ball joints, some electrical faults with the windscreen washers and lights, and general corrosion was noted on the underside of the car. More specifically, this was due to rust on the four jacking points, the sills and the driver’s floor pan. 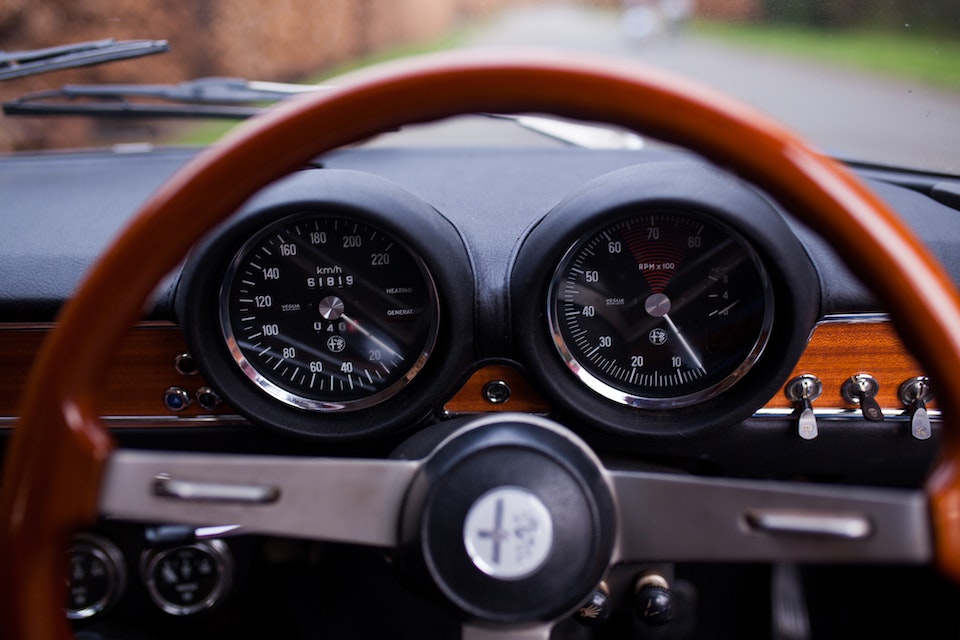 Knowing what work needed to be done, new components were ordered from marque parts specialist, Classic Alfa. For the metalwork, the car was handed over to Stella Welding in Guildford, which took the time to ensure that all necessary repairs were made to the underbody. This included repairs to the sills, new front pans, and new or repaired front and rear jacking points. 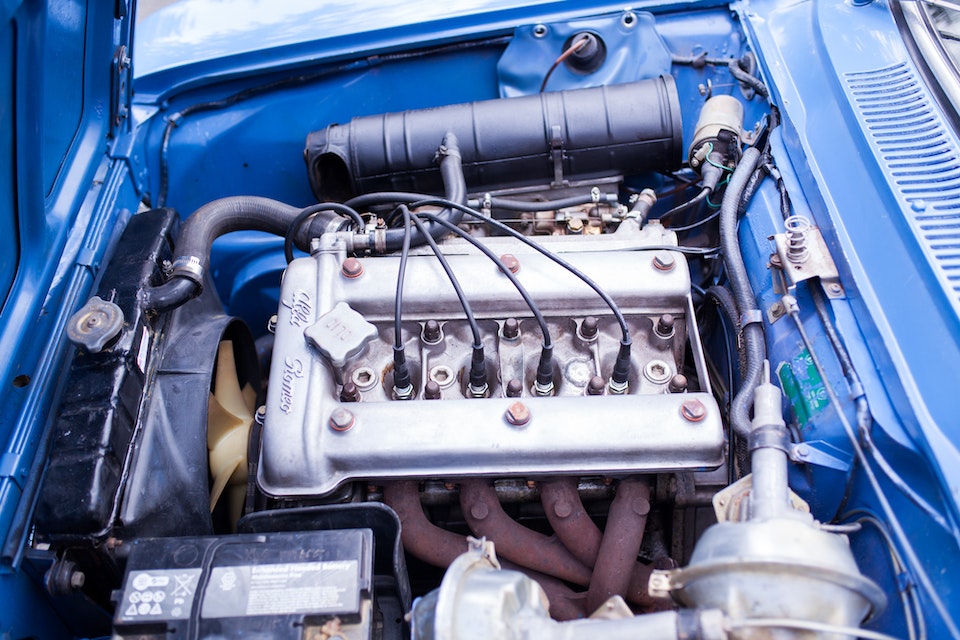 The next item on the agenda was attending to the brakes, which included a new master cylinder as well as new flexi hoses to replace perished items. A new fuel tank was fitted, along with a fresh filler seal, tank sender and fuel filter. The front anti-roll bar drop links and bushes were replaced, new tie rods were installed, and the prop shaft centre bearing was renewed. Finally, general mechanical refurbishment and tuning was carried out by Kennett Cars near Cranleigh, Surrey. 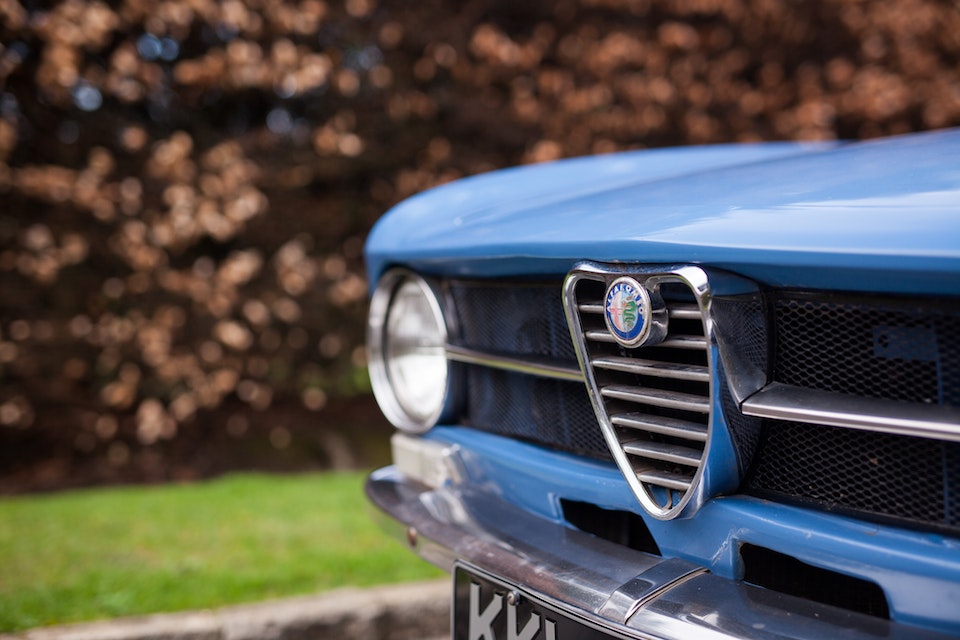 With all advisory items attended to, the Alfa Romeo was subsequently re-tested nearly two months later on 23 July 2019, at 61,732 km, which resulted in a clean pass with no advisories. The wheels are fitted with a fresh set of budget tyres in size 185/65 R14. 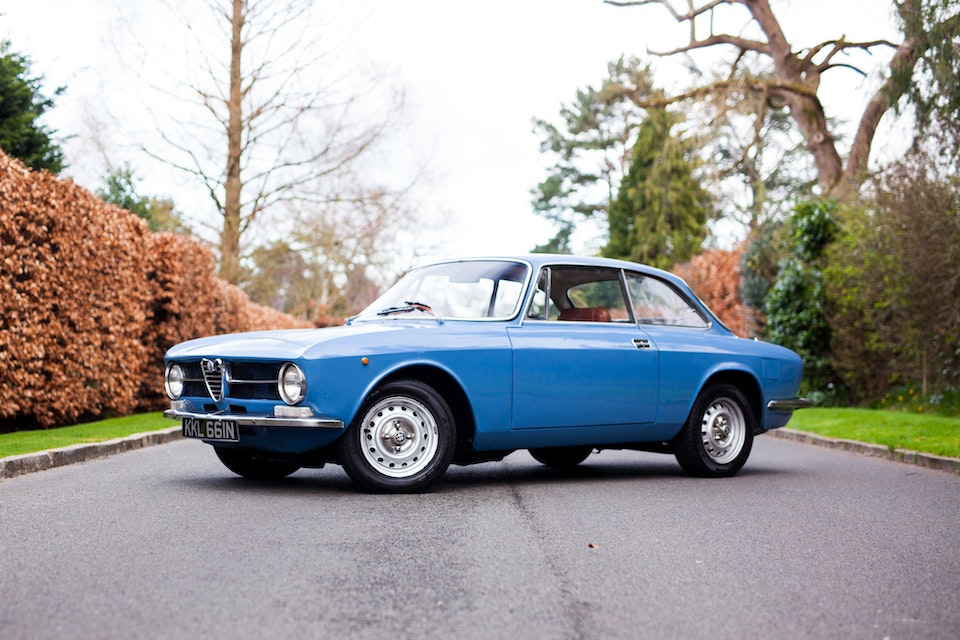 This Alfa Romeo GT 1600 Junior is a handsome 1970s coupe, with strong performance from the 1.6-litre twin-cam engine, and a wonderful period-perfect interior. Rather than being a later conversion, this is also a genuine right-hand drive car, as confirmed by the official marque archives in Milan. Having now had significant work to ensure it is solid underneath, and that it drives smartly on the road, this is now a great candidate for some further cosmetic improvement by another enthusiast.