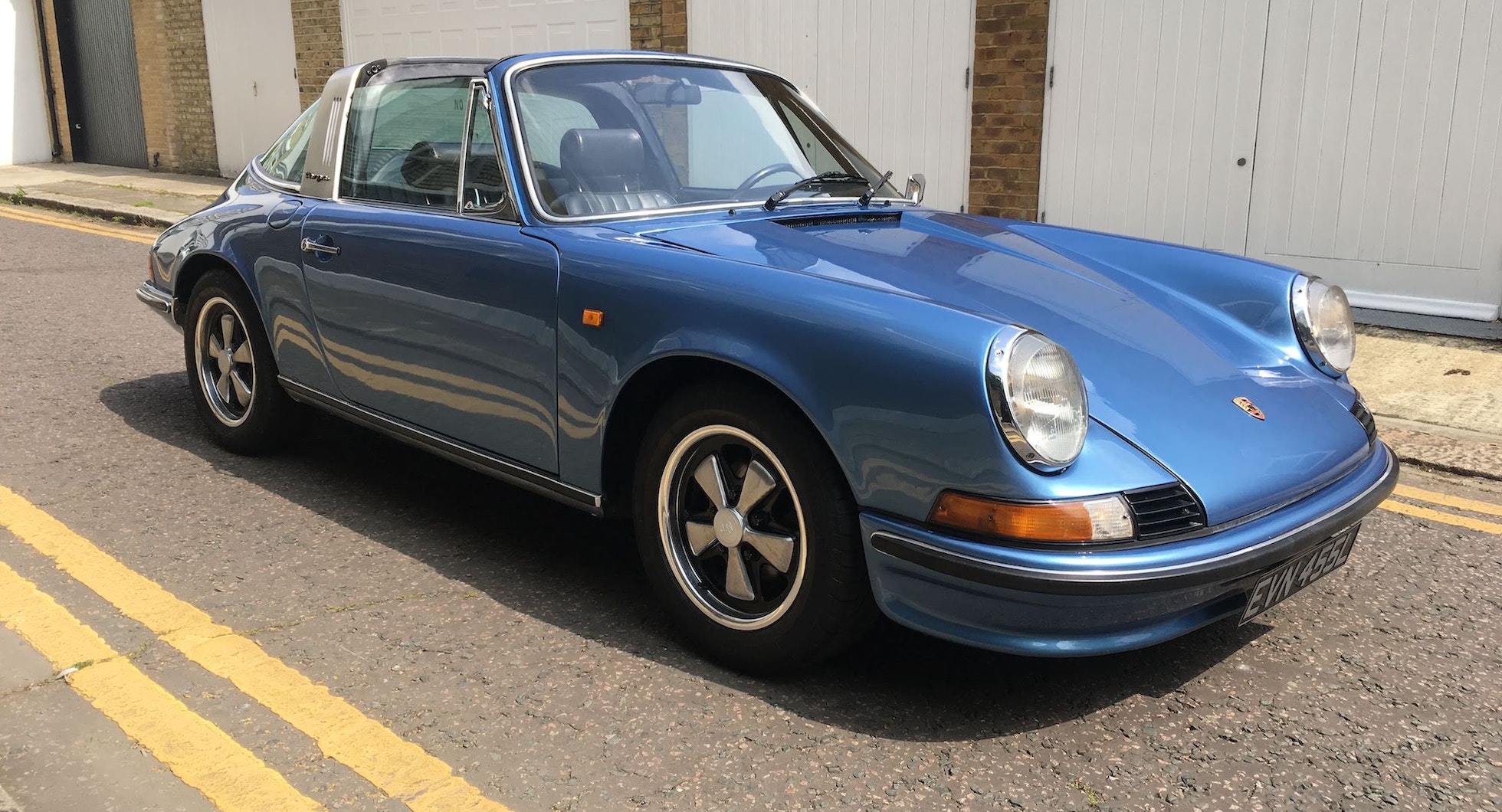 This 1972 Porsche 911 E 2.4 MFI Targa is a wonderful open-top sports car, resplendent in its original Gemini Blue Metallic colour, and sought after as a rare side oil filler (’Oelklappe’) model. It is powered by the 2.4-litre air-cooled flat-six engine with Bosch mechanical fuel injection, producing around 165bhp, which is driven through a five-speed H-pattern manual transmission. The odometer shows just 39,758 miles, and the car is registered in the UK. 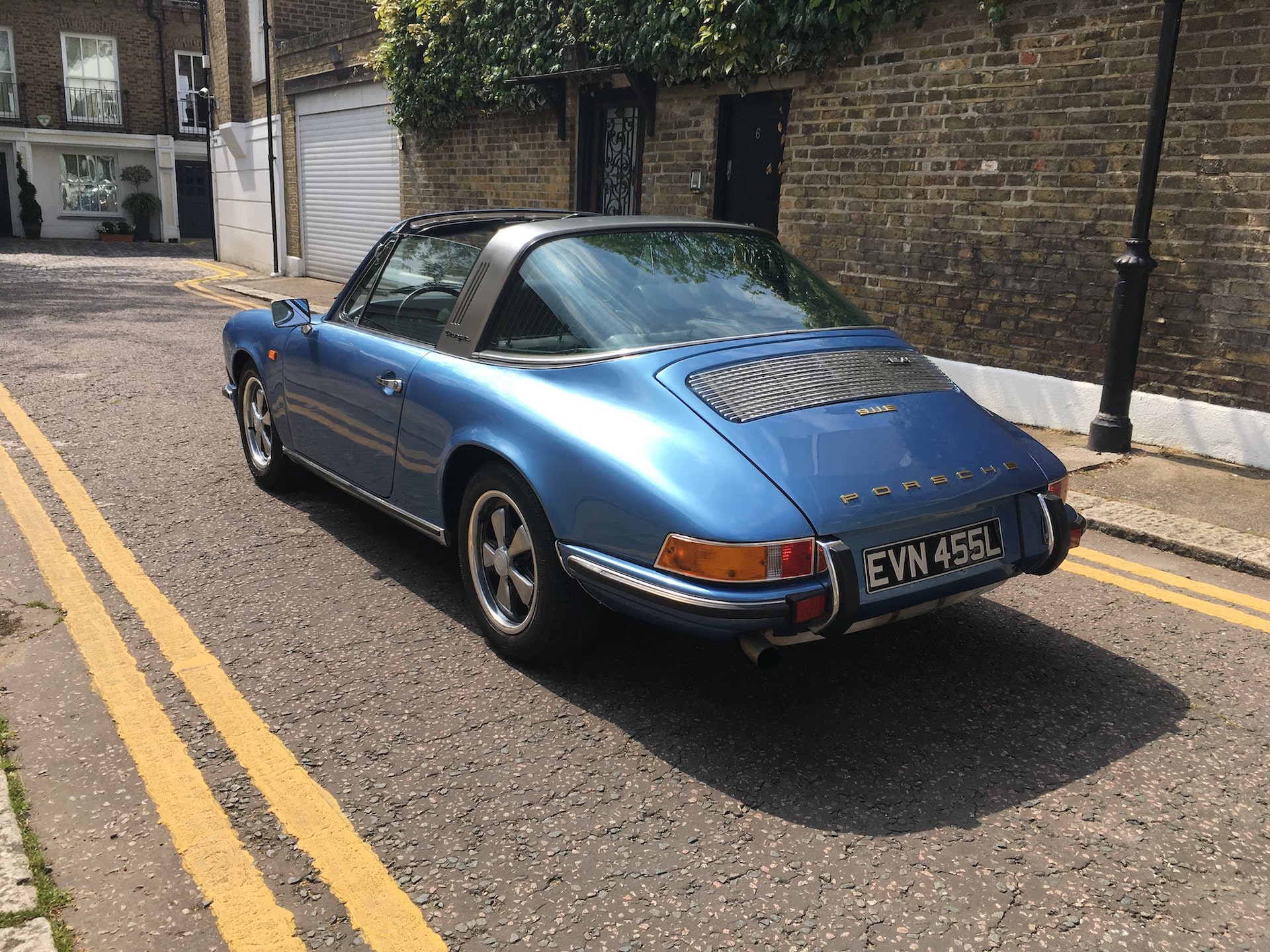 The 911 E was the mid-range model between the 911 T and 911 S variants, with the ‘E’ standing for einspritzung, the German reference to its Bosch mechanical fuel injection. What sets this Porsche further apart from its siblings of the era is the external oil filler flap, which appears only on 1972 models, and which was the result of a significant effort to improve the car’s handling balance. 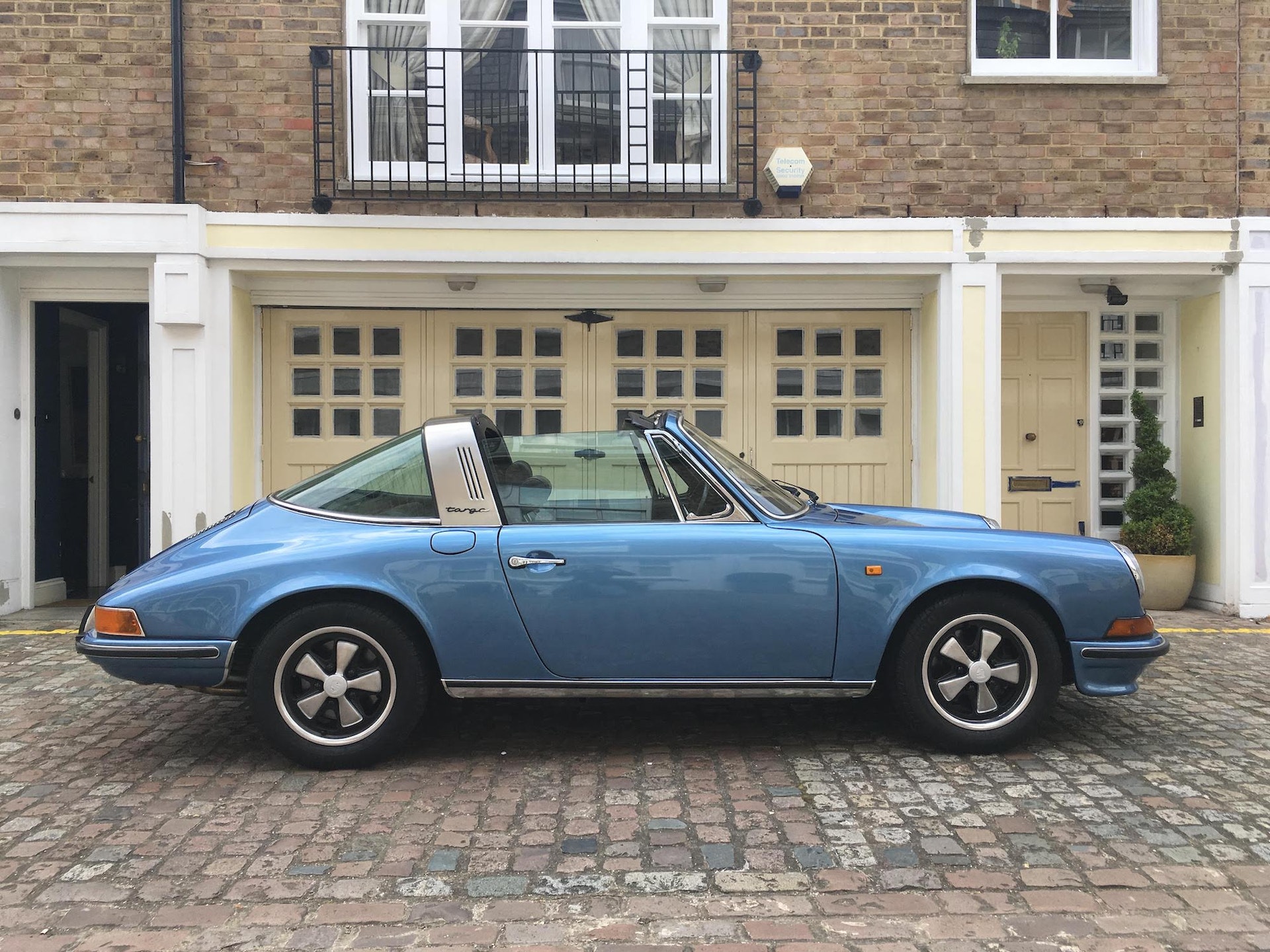 To shift the car’s centre of gravity forwards, Porsche relocated the dry sump oil tank to ahead of the right rear wheel, which moved more of the weight inside the wheelbase. The change necessitated a separate filler cap on the wing, but the story goes that it confused fuel station attendants, and that petrol was sometimes poured into the oil tank by mistake. Whether myth or truth, the design was swapped back by 1973, and thus the 1972 models that feature the side oil filler are now desirable among collectors. 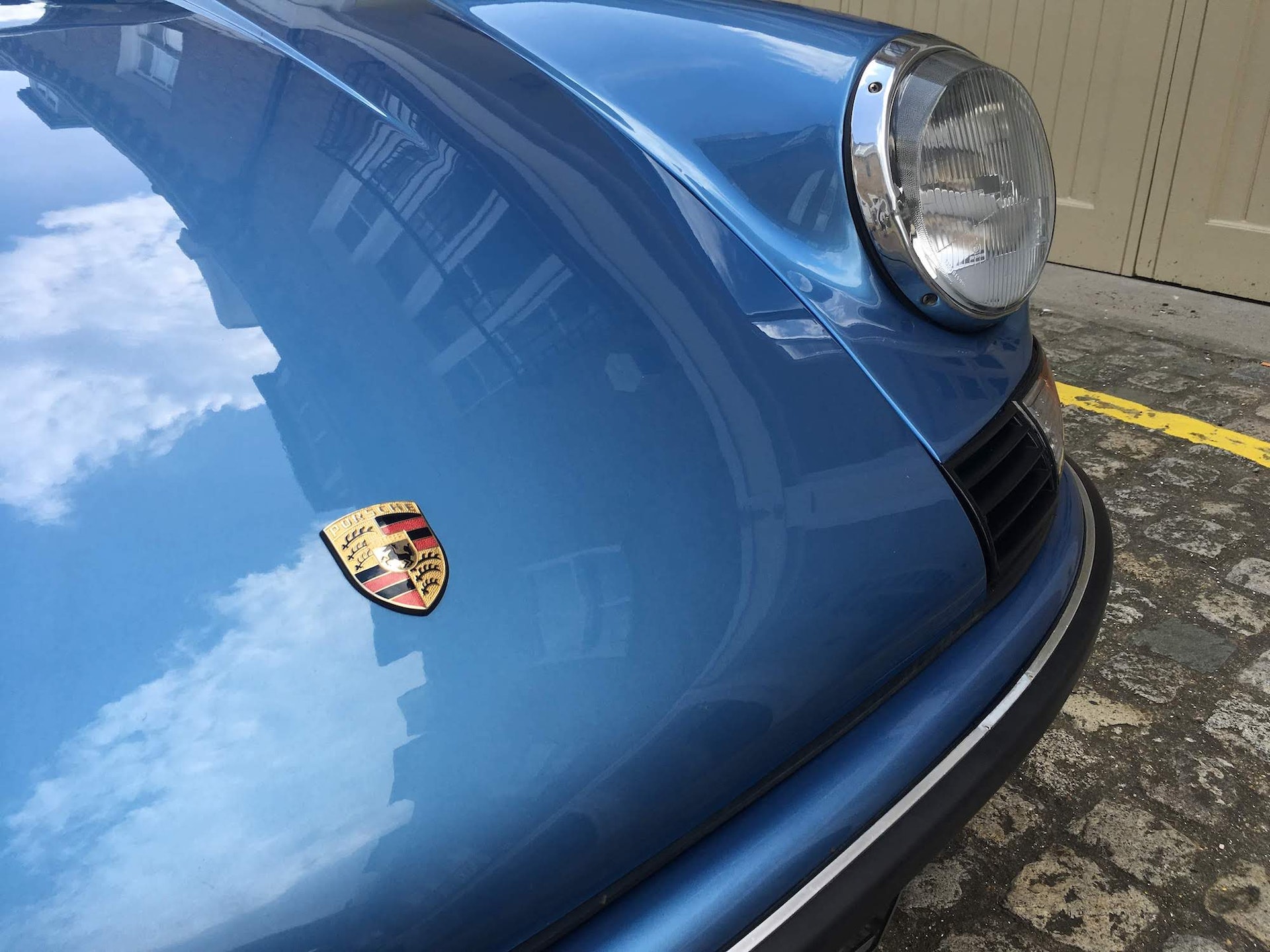 A Letter of Origin from Porsche confirms that this car was built at the marque’s Zuffenhausen factory and its completion date was 20 April 1972. It states that the car was built to German specification, with left-hand drive, and that its original paint colour was Gemini Blue Metallic. The dealer sticker in the rear window shows that it was at Porsche Centrum Køge in Denmark at some point, while a VIN plate in the engine bay suggests that the car has been in the US as well. It was imported to the UK in June 2018, and was subsequently given registration number ‘EVN 455L’. The current owner acquired the car in April 2019. 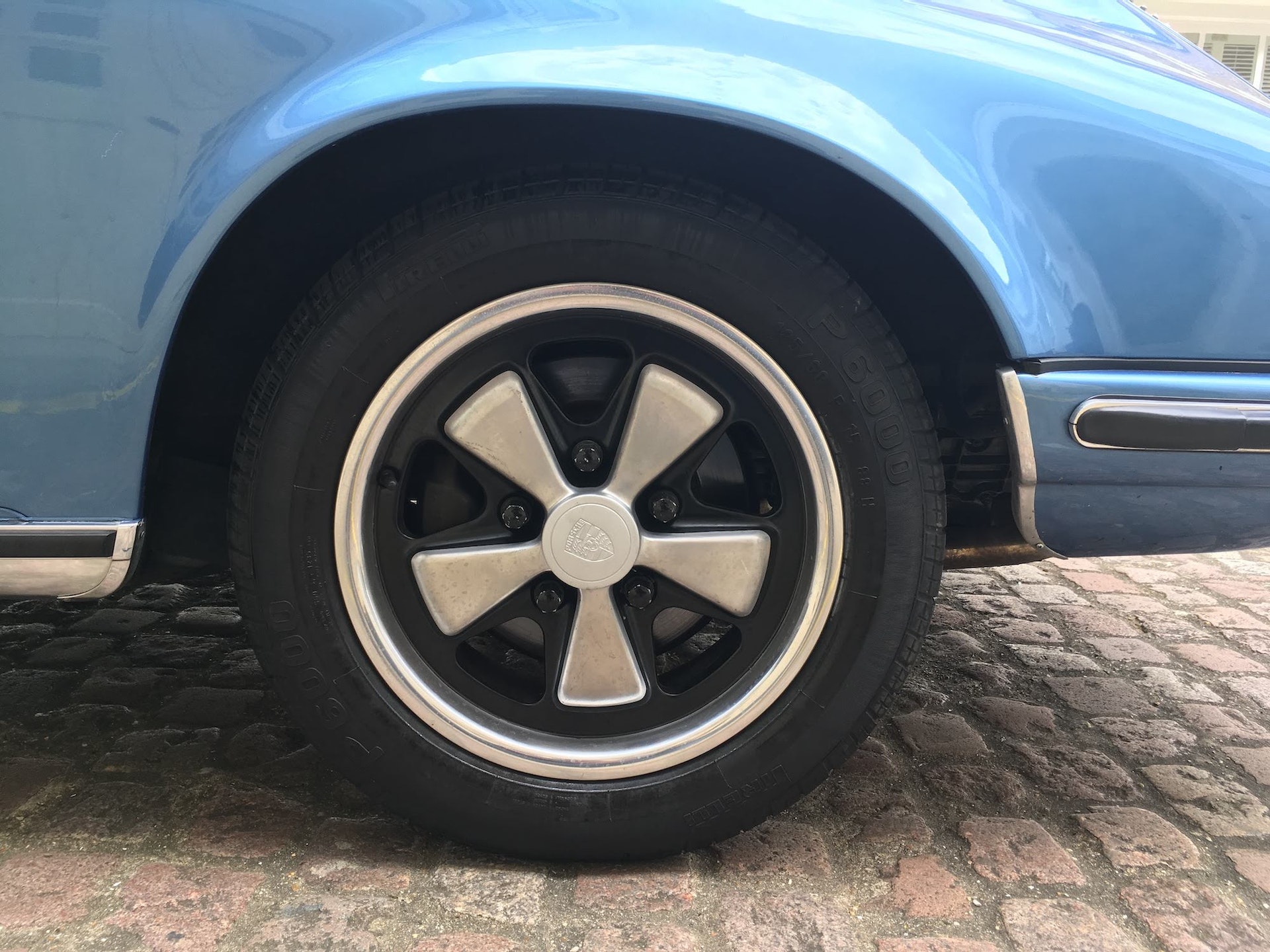 Its bodywork appears to be in good condition and is finished in a more recent coat of the original and attractive factory colour. There are a few minor imperfections in the paintwork, notably some lifting of the paint film below the rear window on the driver’s side, some surface corrosion on top of the rear bumper. There are also some scuffs and scratches present on the metal roll bar, though the sill covers, door jambs, and bonnet and boot shuts are all in very good condition. 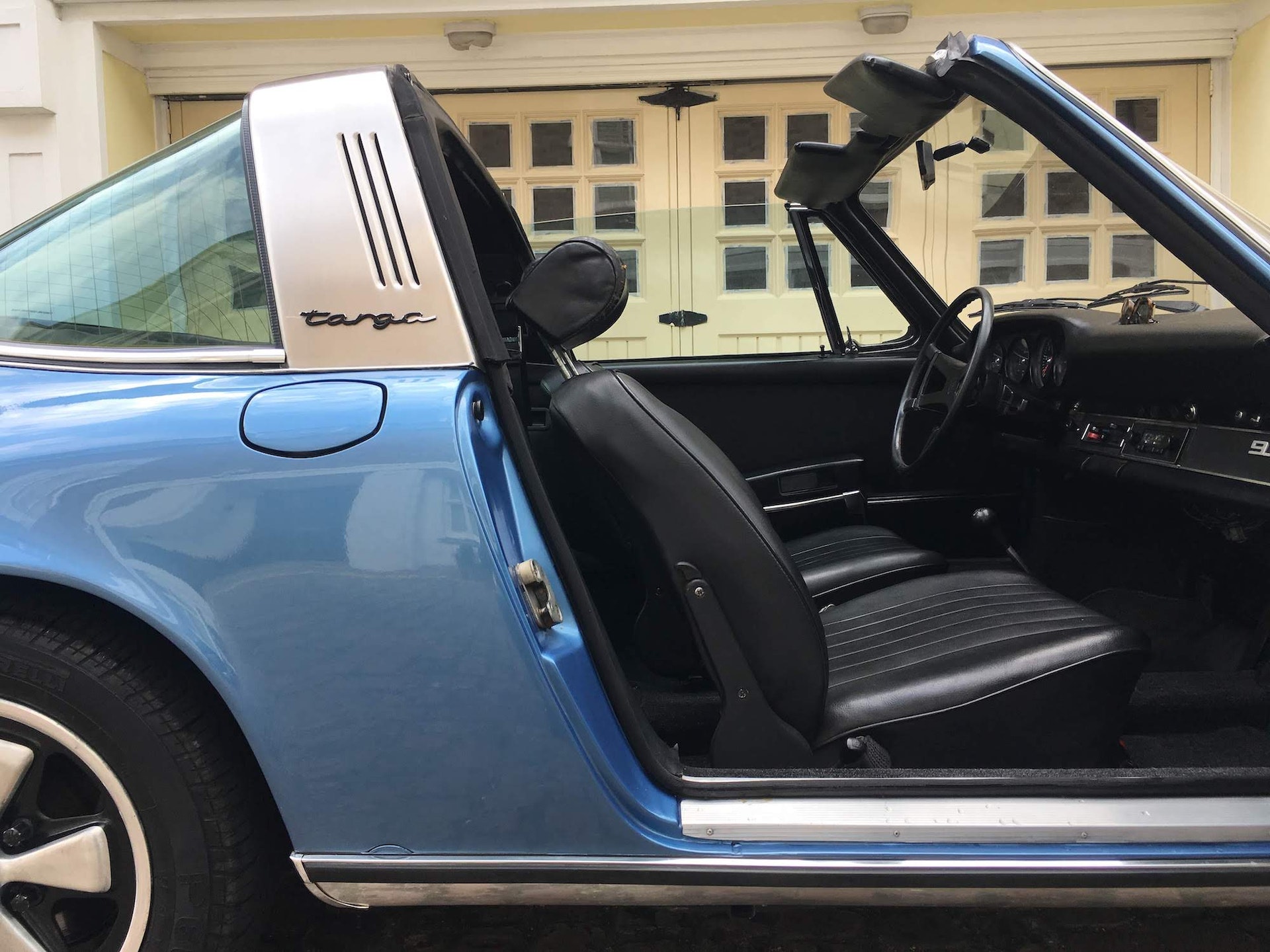 There are minimal marks on the 15-inch Fuchs alloy wheels, which have silver rims and petal spokes over matt black centres. They are shod in a set of Pirelli P6000 tyres that are still in good order, but may be in need of replacement soon.

The interior is described as being in good condition by the seller. Most of the black vinyl upholstery has very little wear to speak of, though there is discolouration and cracking at the edges of the front headrests. The carpets present very well throughout, with just a few marks on the rubber section beneath the pedals. The leather-trimmed Porsche steering wheel is in good condition and looks original, as does the gear knob. 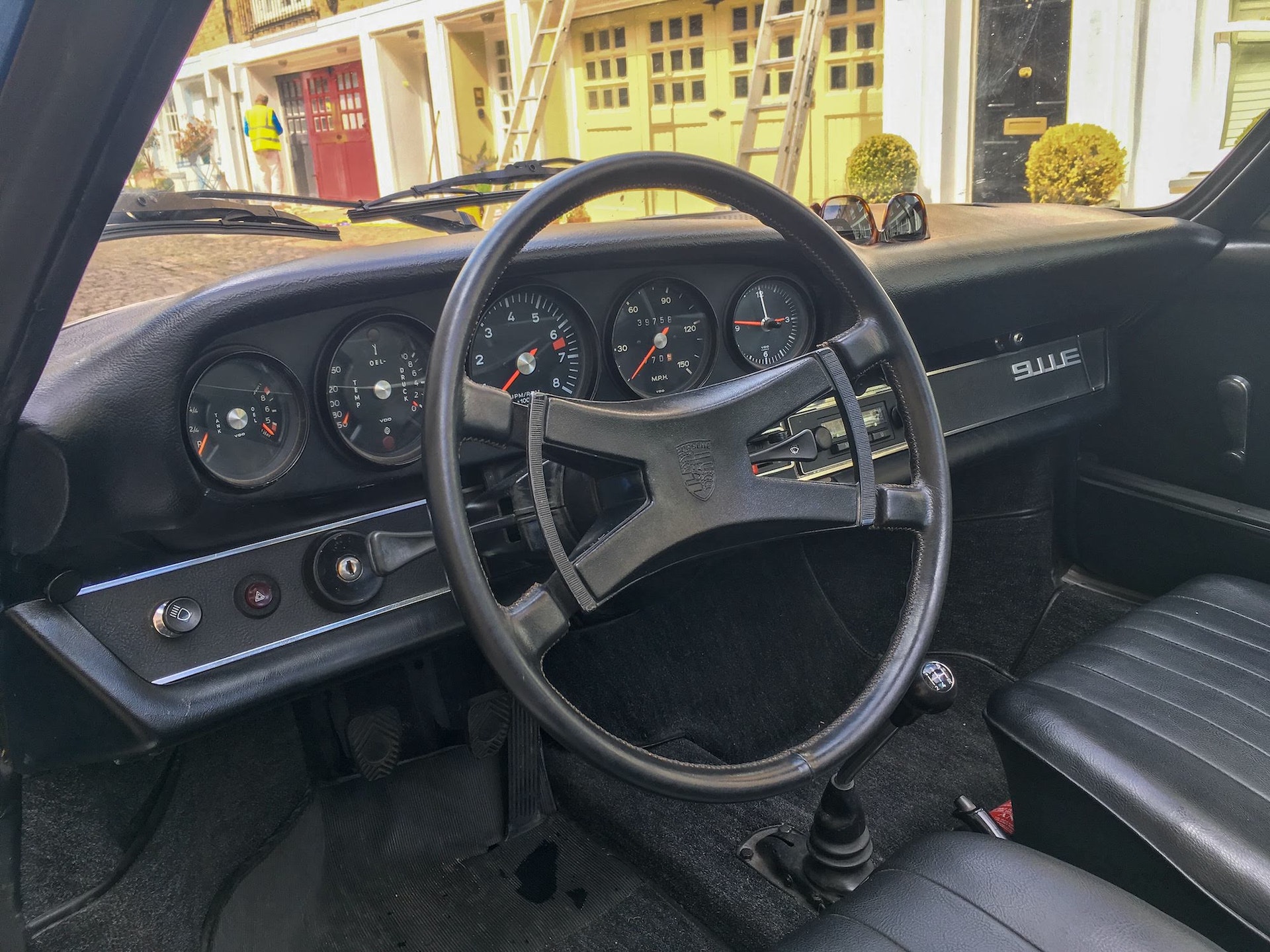 All of the instrument gauges are clear and undamaged, and all of the switchgear works as it should. There are a few small marks on the door cards, and some damage to the corner of the open storage pocket on the passenger side. The luggage area looks smart and is lined with black carpet, and the black vinyl targa top is also in very good order. 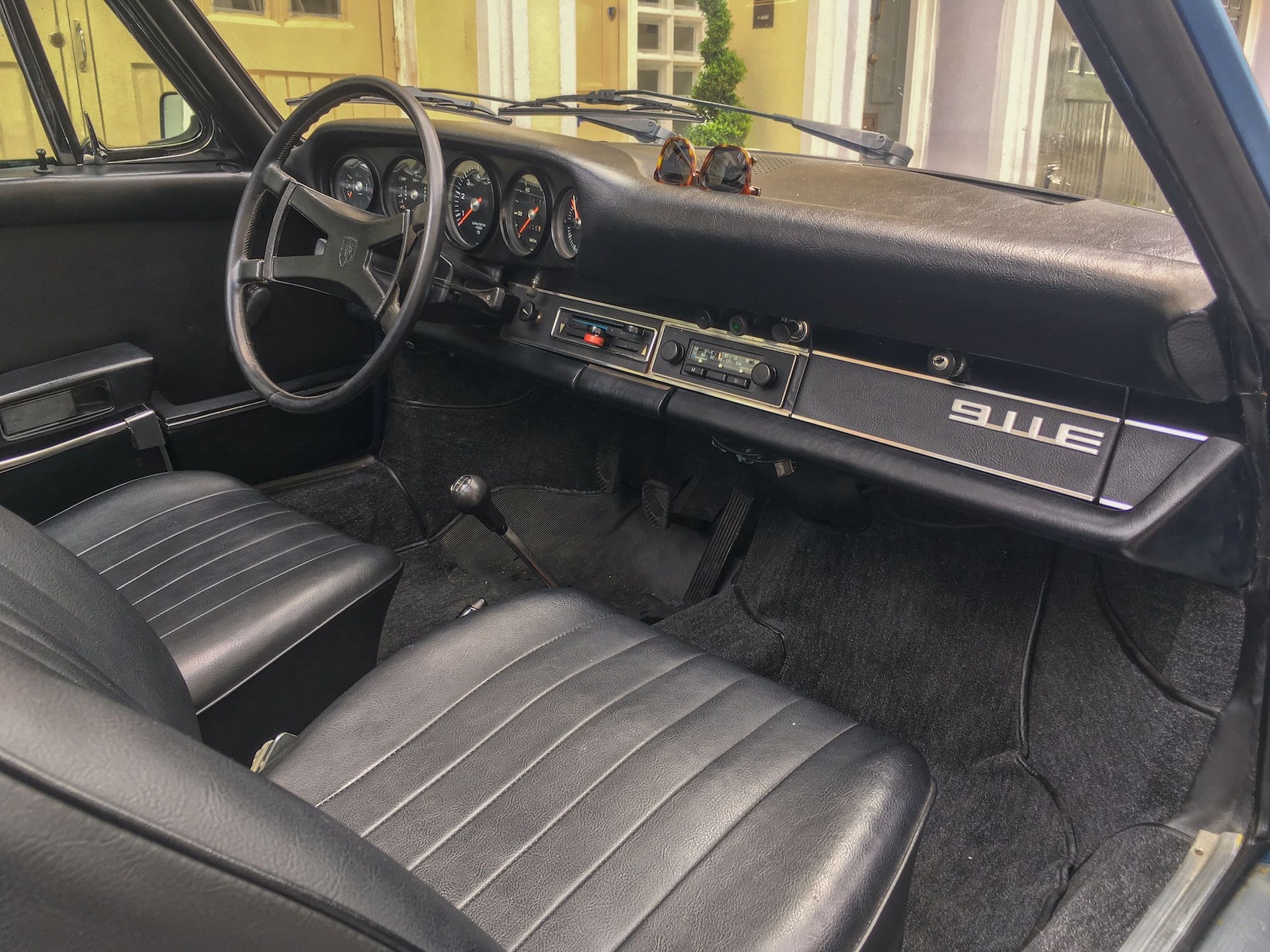 The engine bay looks very clean, and the chassis and suspension are sound. Its last MOT test was on 26 April 2019 at 39,572 miles, passing with no warnings or advisories. The last scheduled maintenance was carried out in January 2020, when a major engine rebuild also took place, at a cost of £20,000. 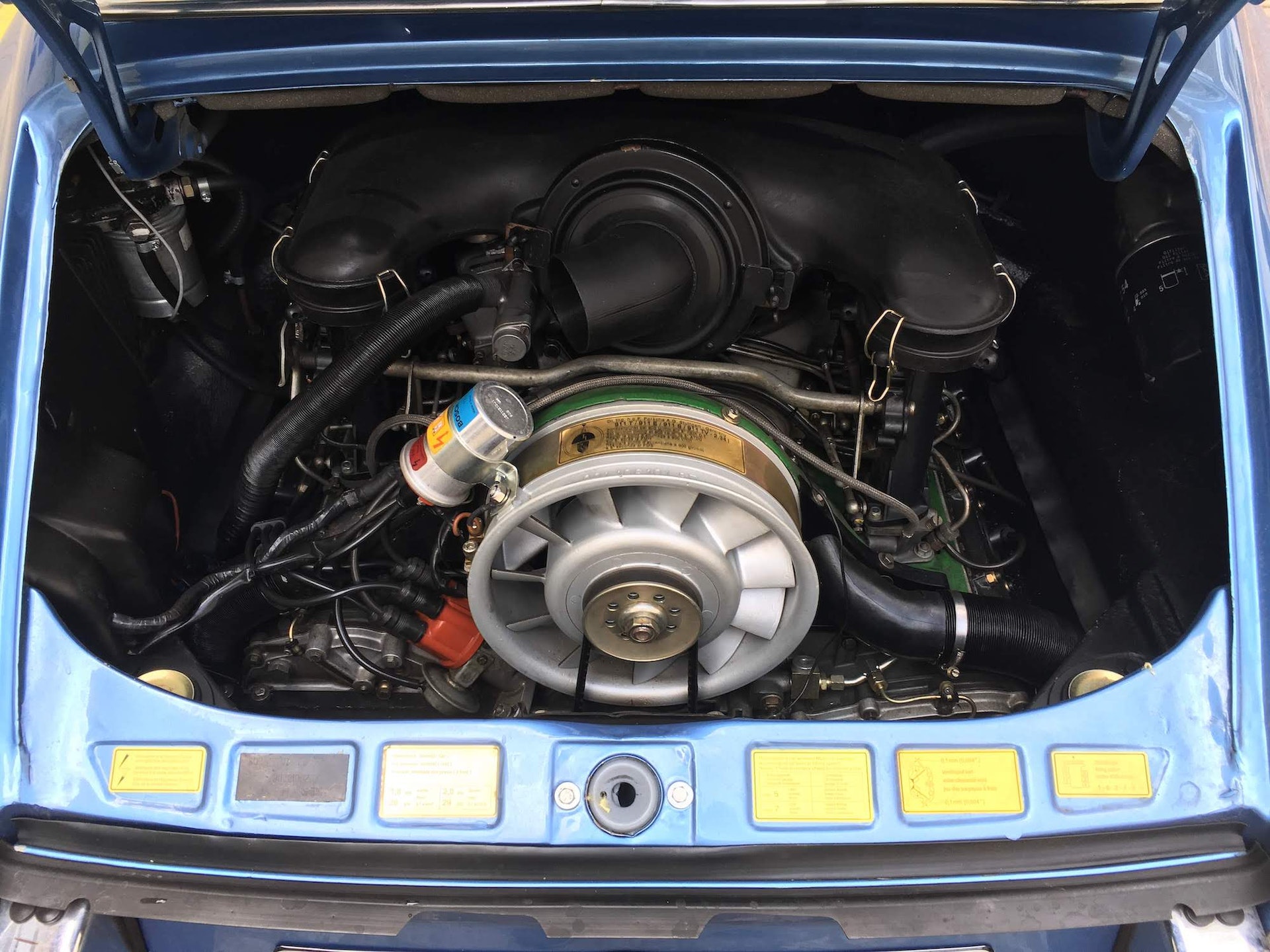 The vendor commissioned Mark Chiltern, an independent Porsche specialist for Intersport Racing, to perform the work, which included replacing the crank cases, six pistons and their rings and barrels, three connecting rods, the crankshaft, one cylinder head, valve guides and the oil pump and driveshaft. All alloy parts were vapour blasted, and original parts were rebuilt, including the cylinder head, connecting rod nuts and bolts, timing chains, head studs and nuts, the crankshaft and intermediate shaft bearings, the rocker shaft seals, the oil feed, fittings and switch, the engine gasket set and spark plugs. The engine parts were painted black and the engine surround green. The flywheel and clutch were then reassembled and the engine installed. 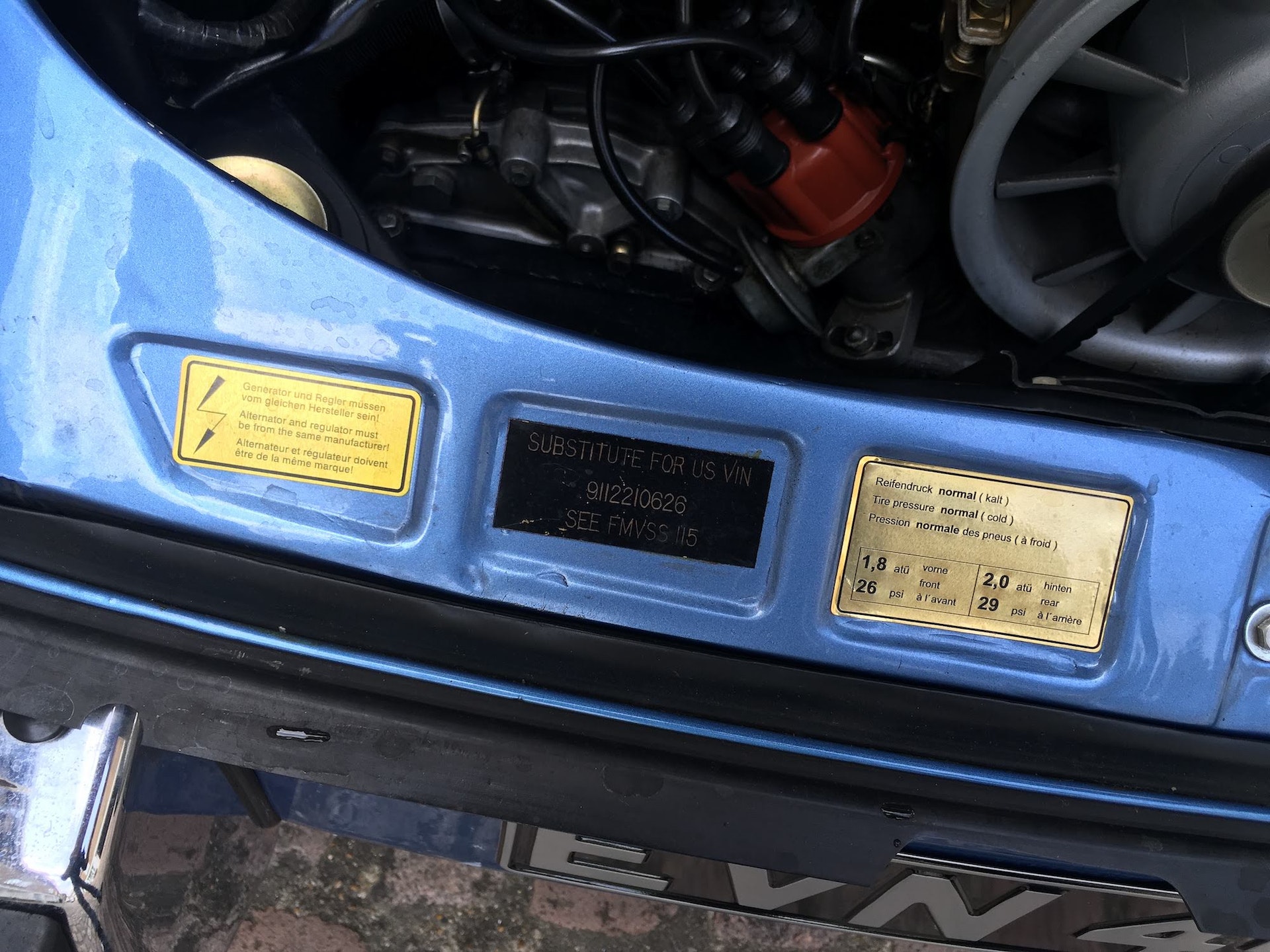 Accompanying the car is its UK V5 document, import documentation, the official Porsche Letter of Origin, and paperwork regarding its engine rebuild. Having been manufactured prior to 1979, the car is also eligible for exemption from road tax and the London Ultra-Low Emission Zone (ULEZ) charge. 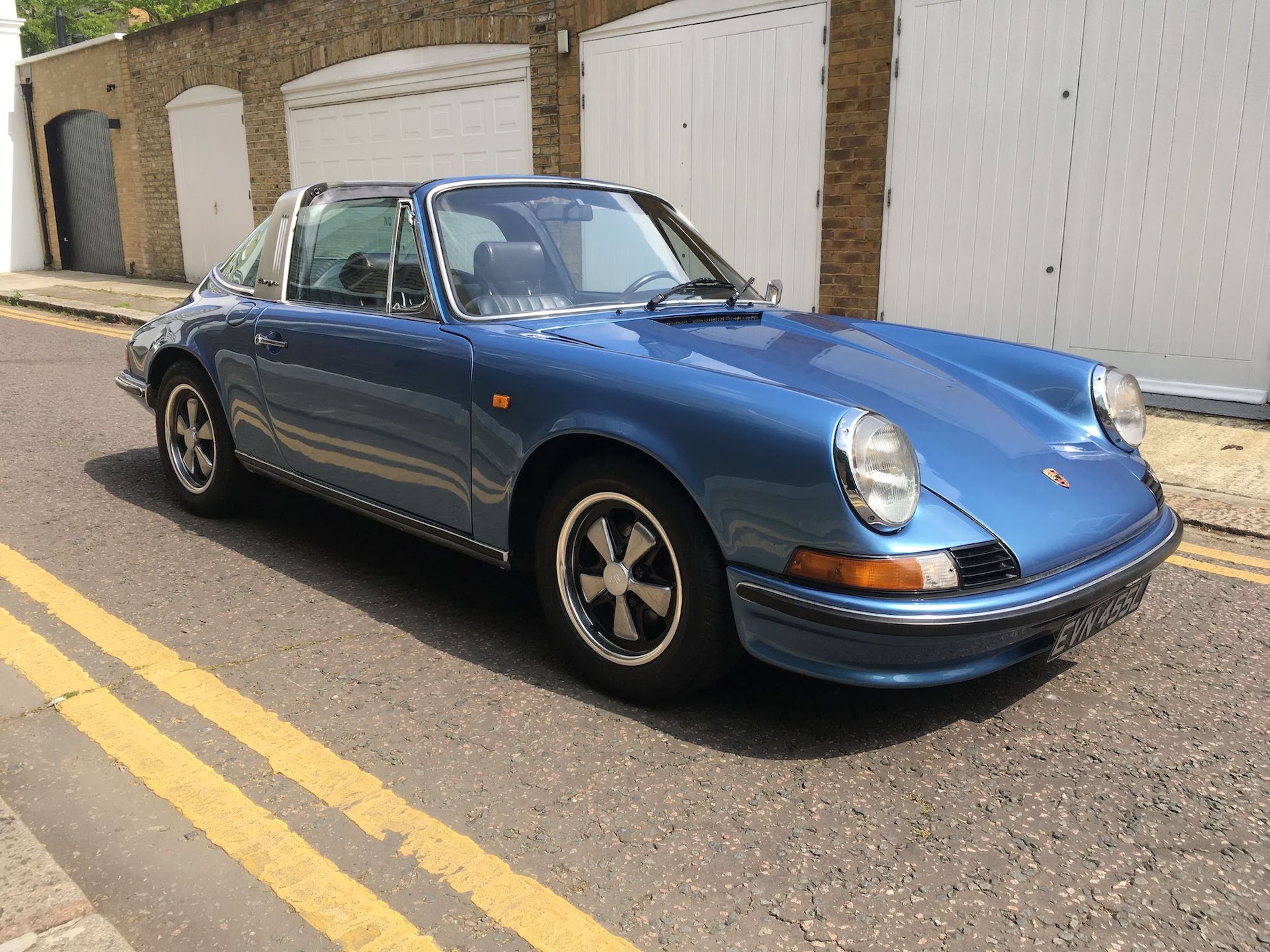 This Porsche 911 E 2.4 Targa has the classic shape that finds enthusiasts among every generation, and with its open-top option it can be enjoyed even more when the sun comes out. This particular car boasts the sought-after external oil filler, not to mention a superb original factory colour, and would make a wonderful addition to any collection of Porsche models. With a fresh engine rebuild, this car drives as smartly as it looks, and is a joy to relish on the open road.