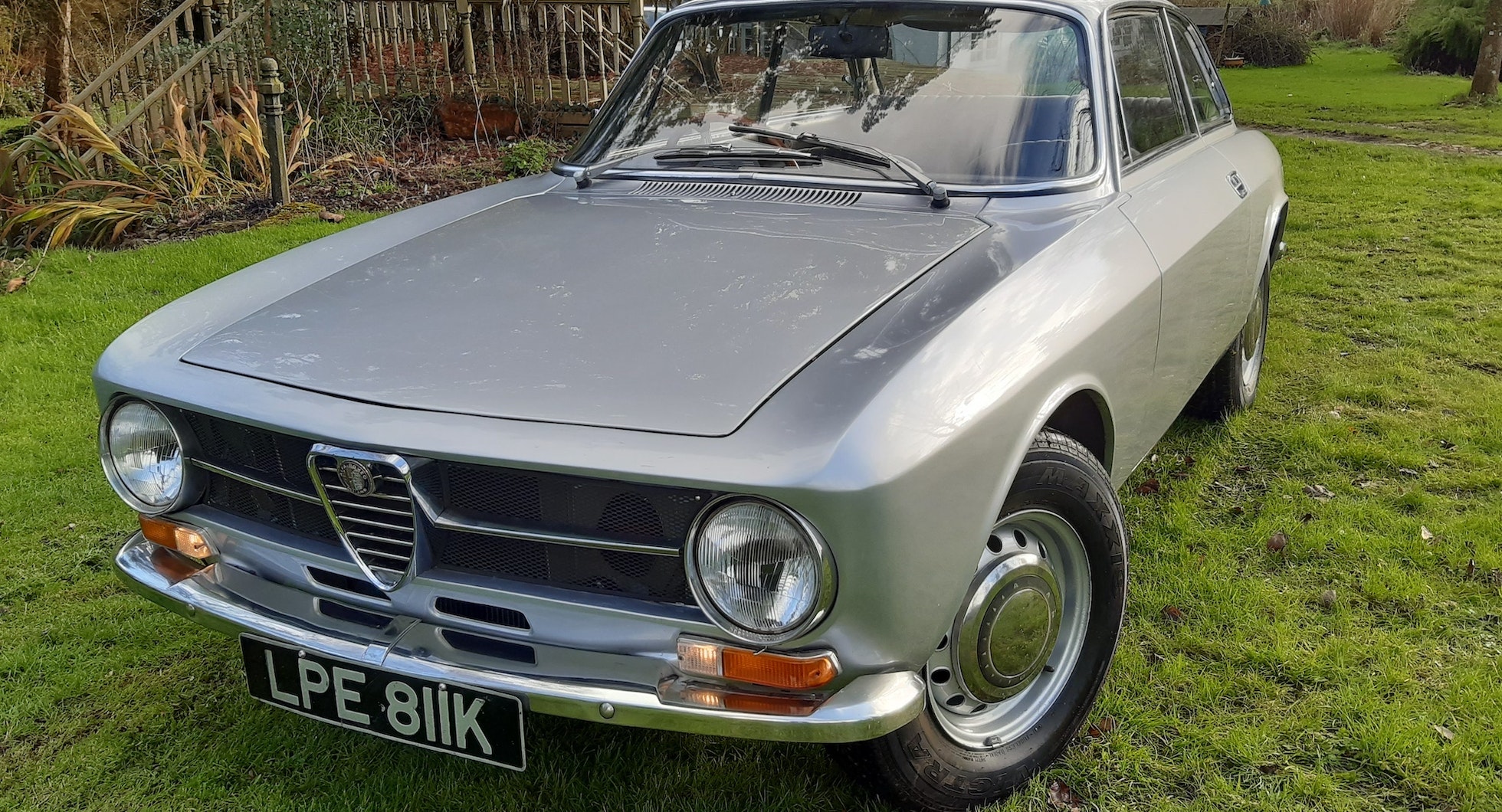 This 1972 Alfa Romeo GT Junior is a charming Italian classic, which has been owned and cherished by the seller for the last 28 years. Its stock engine has been swapped for the more powerful 2.0-litre twin-cam from a 2000 GT Veloce, producing 115bhp, which is driven through the rear wheels via a five-speed manual transmission. The car is believed to have covered around 95,000 miles from new. 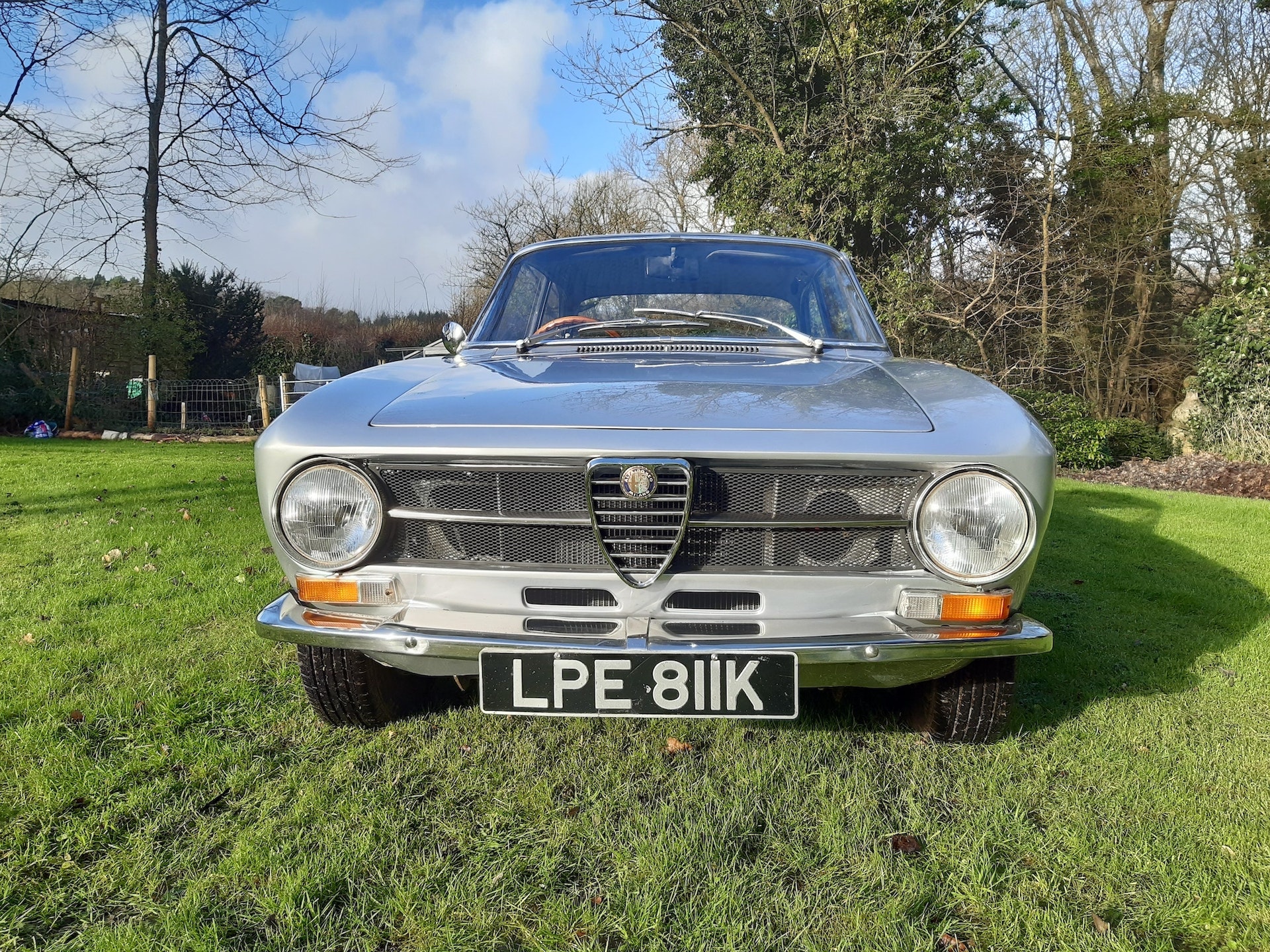 Delivered new to the UK, this Alfa Romeo was first registered in May 1972. It is finished in the original-colour metallic silver coachwork with ribbed black vinyl upholstery. The current owner acquired the car in 1991, and has covered some 65,000 miles on the road in the 28 years since then. He reports that there is barely any part of the car that he has not restored or replaced during his time with it. It was subject of a comprehensive £15,000 bodywork overhaul in 2005. 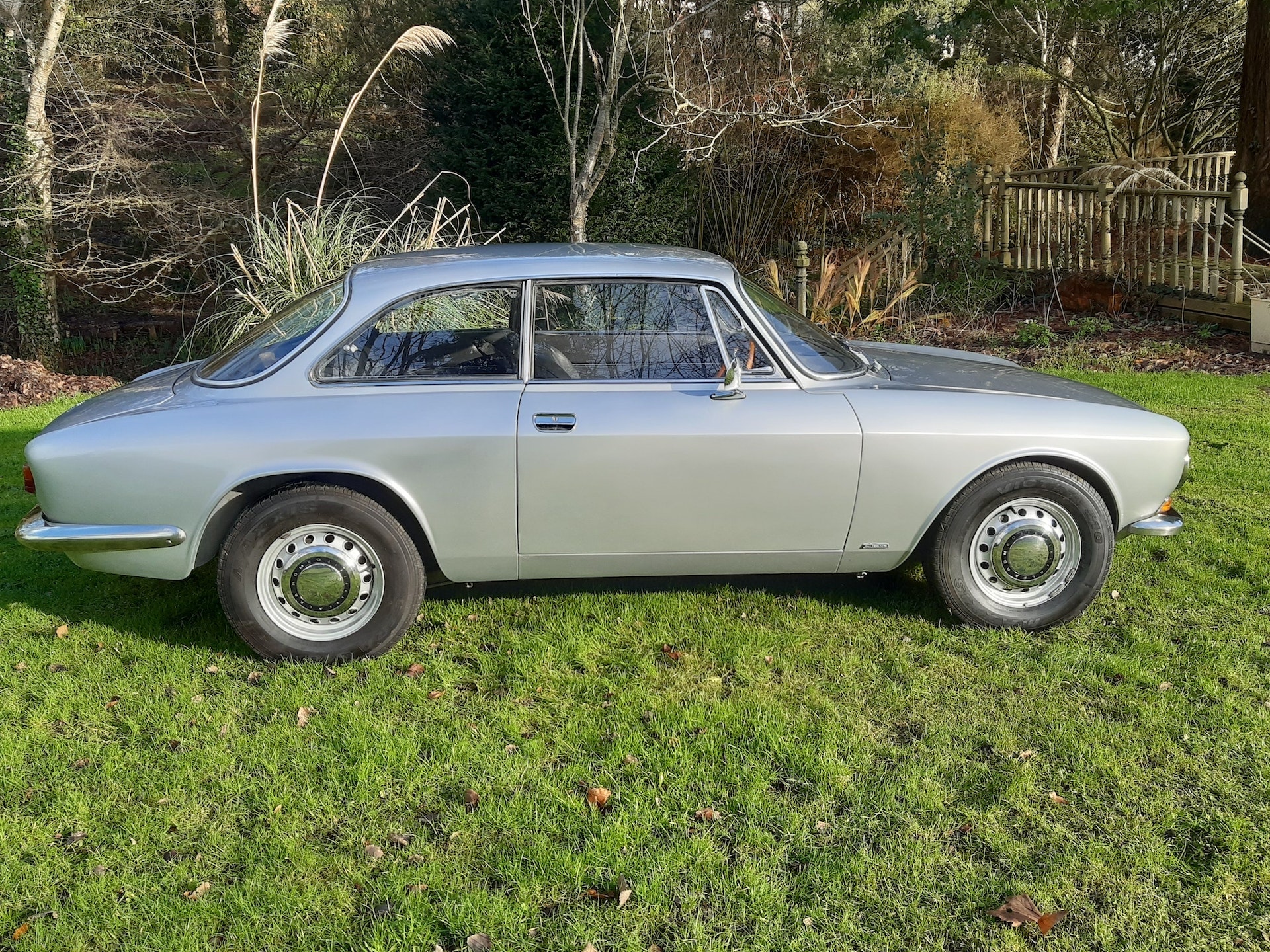 The body panels are reported to be in excellent, rust-free condition, and the shut lines around the car appear to be very good indeed. Its silver paintwork has recently been refreshed with a respray of the lower section in December 2019. The car sits on an original set of 14-inch steel wheels, which are finished with the correct Alfa Romeo-branded polished hubcaps. The wheels are in sound order, with just a few chips around the rims. 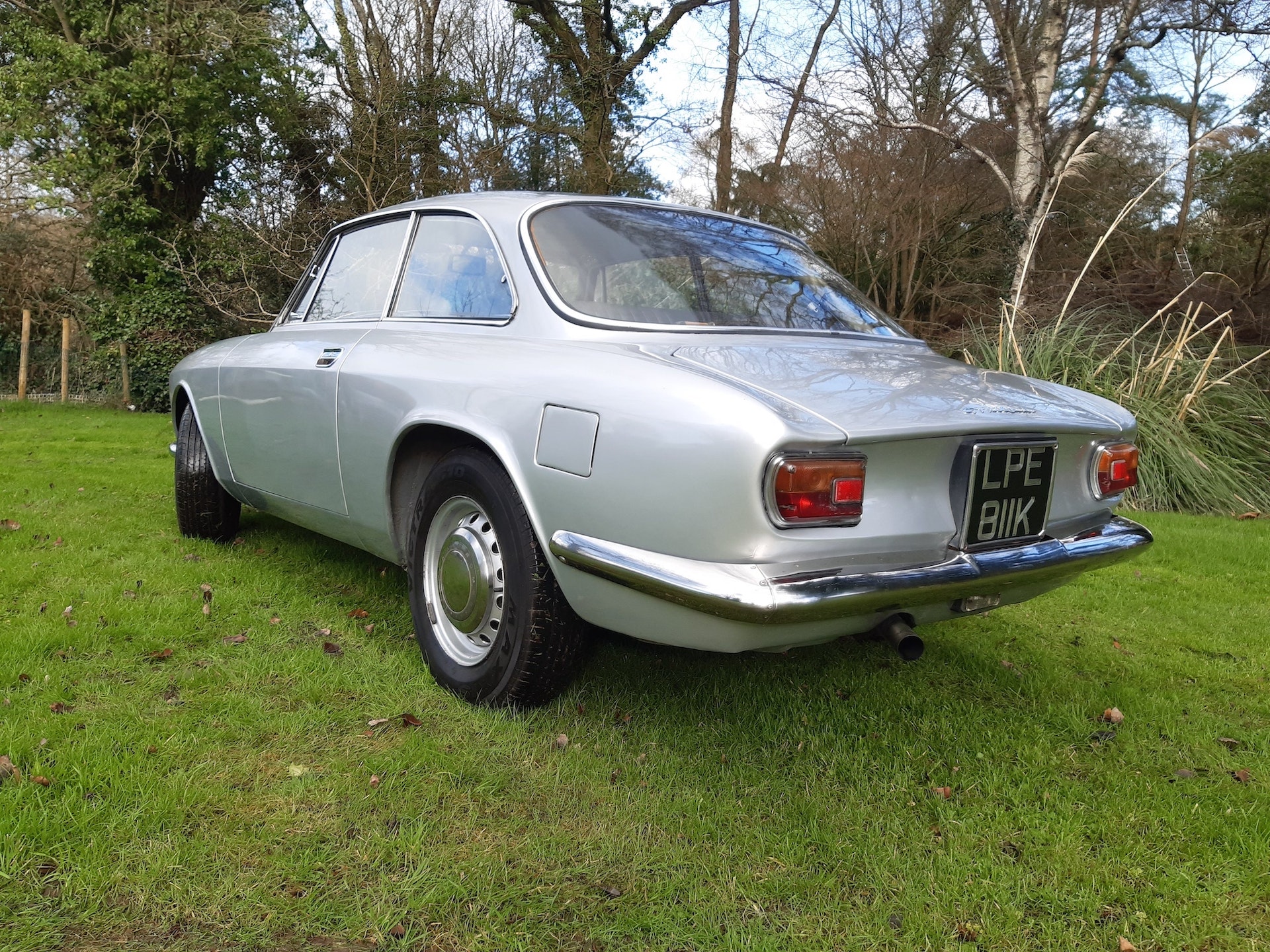 In the cabin, the seats have been re-upholstered in the original style using high-quality black vinyl trim. There is some light wear on the driver’s seat, but otherwise it presents in superb condition. A smart Hellebore wooden steering wheel has also been fitted. The seller notes that there are a few small cracks in the dashboard plastic, as well as the cover under the driver’s door handle. 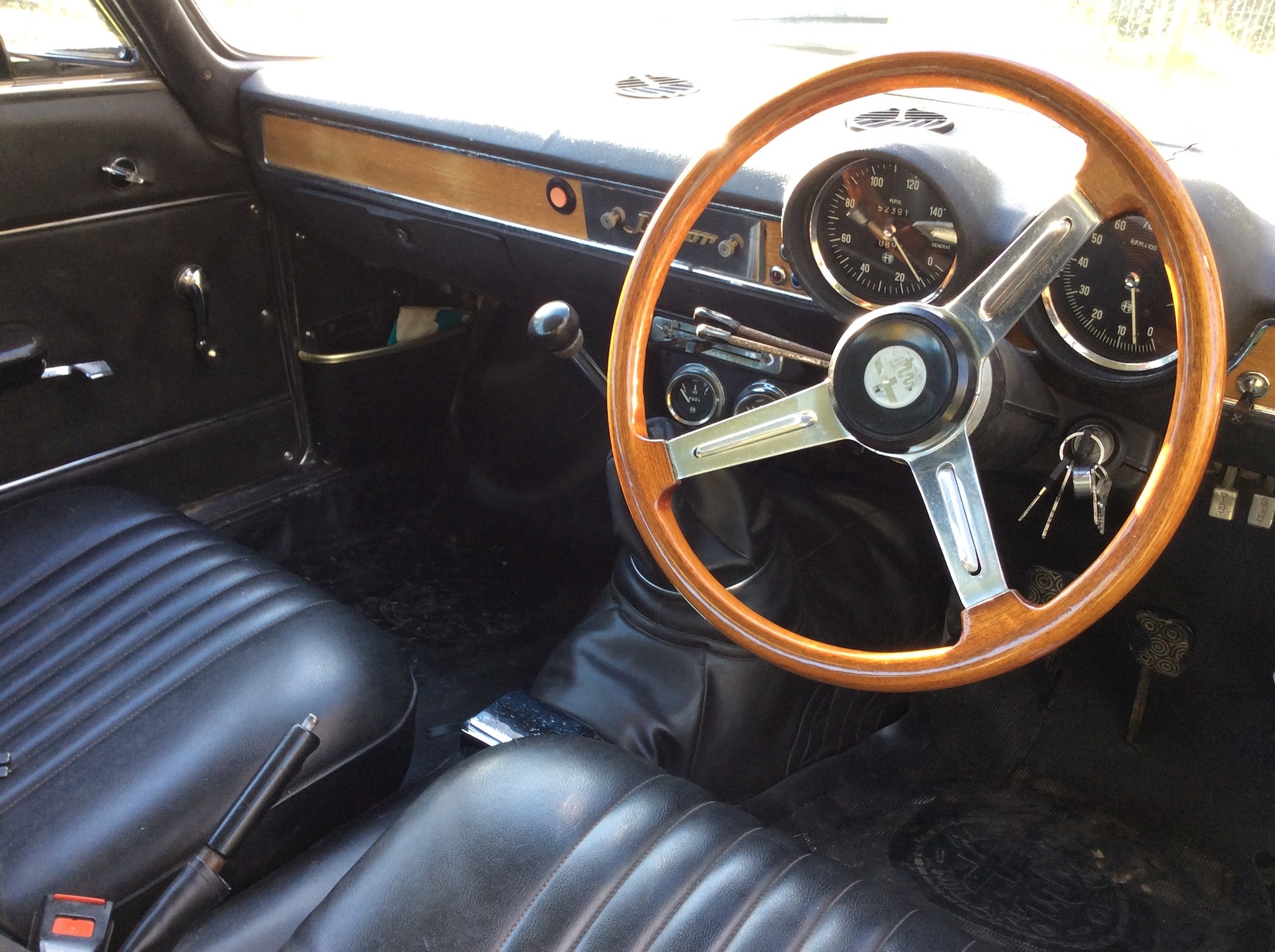 Earlier in its life, the speedometer was changed to replace a faulty unit. While the indicated mileage is now 52,369 miles, the correct figure is around 95,000 miles. The oil pressure gauge is currently not working, but all of the other instruments work as they should. 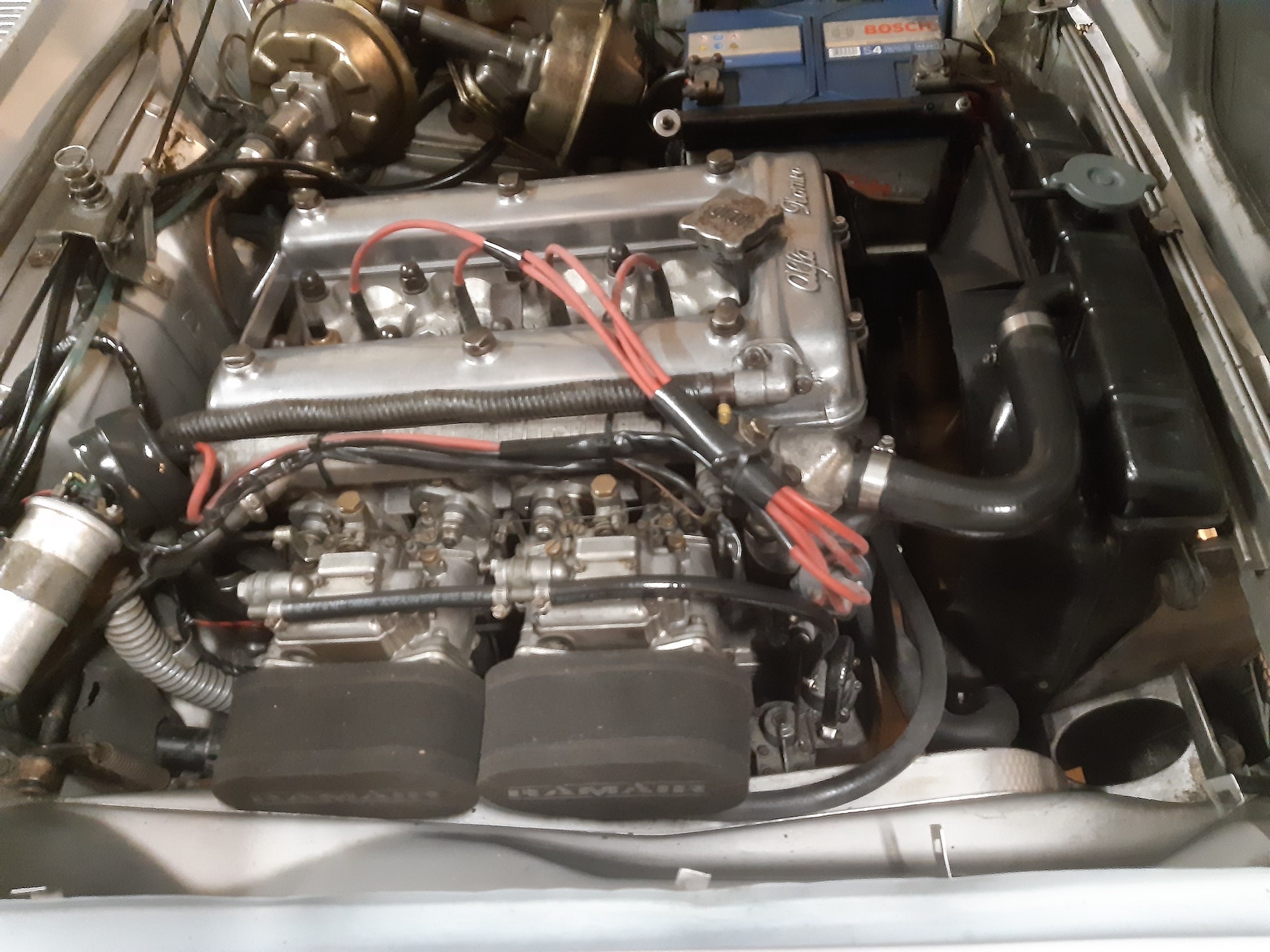 This Alfa Romeo is in fine mechanical order, benefitting from a full engine rebuild around 35,000 miles ago. The camshaft timing chain was replaced during this work, and the car was properly tuned on a rolling road by a local specialist. The 2000 GTV engine is enhanced with re-profiled cams, 123 electronic ignition conversion, as well as ram-air pipes and ‘socks’, which make the car sound particularly tuneful under full acceleration. The car is fitted with the desirable limited-slip differential, which was a factory option available from new. 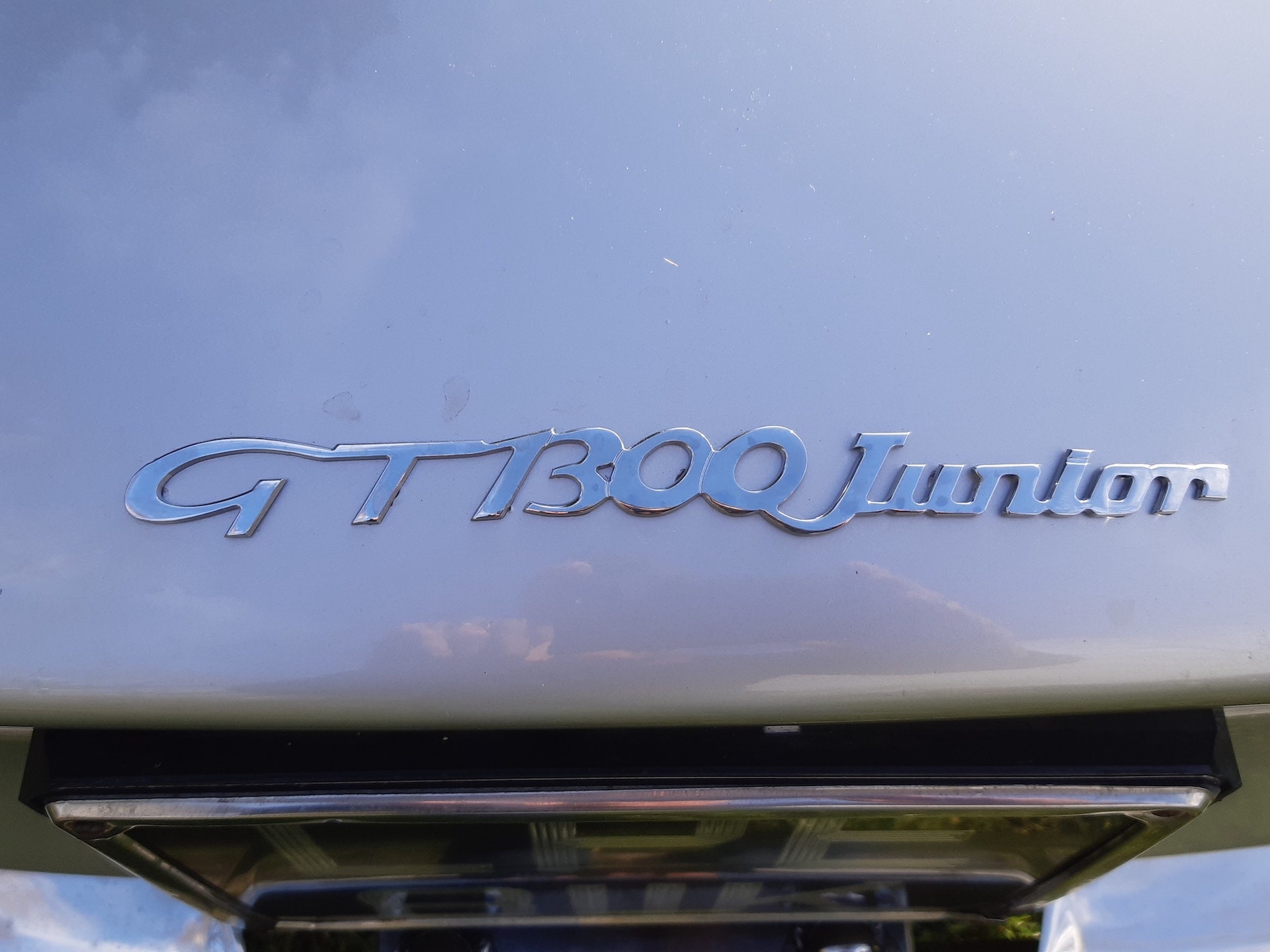 The last scheduled maintenance was carried on in December 2019, with a full service that included renewal of the engine oil and oil filter, re-tensioning of the cam chain, a new fuel filter, a fresh set of spark plugs, and balancing of the carburettors. All oil levels were checked, locks were lubricated, and the handbrake was adjusted. 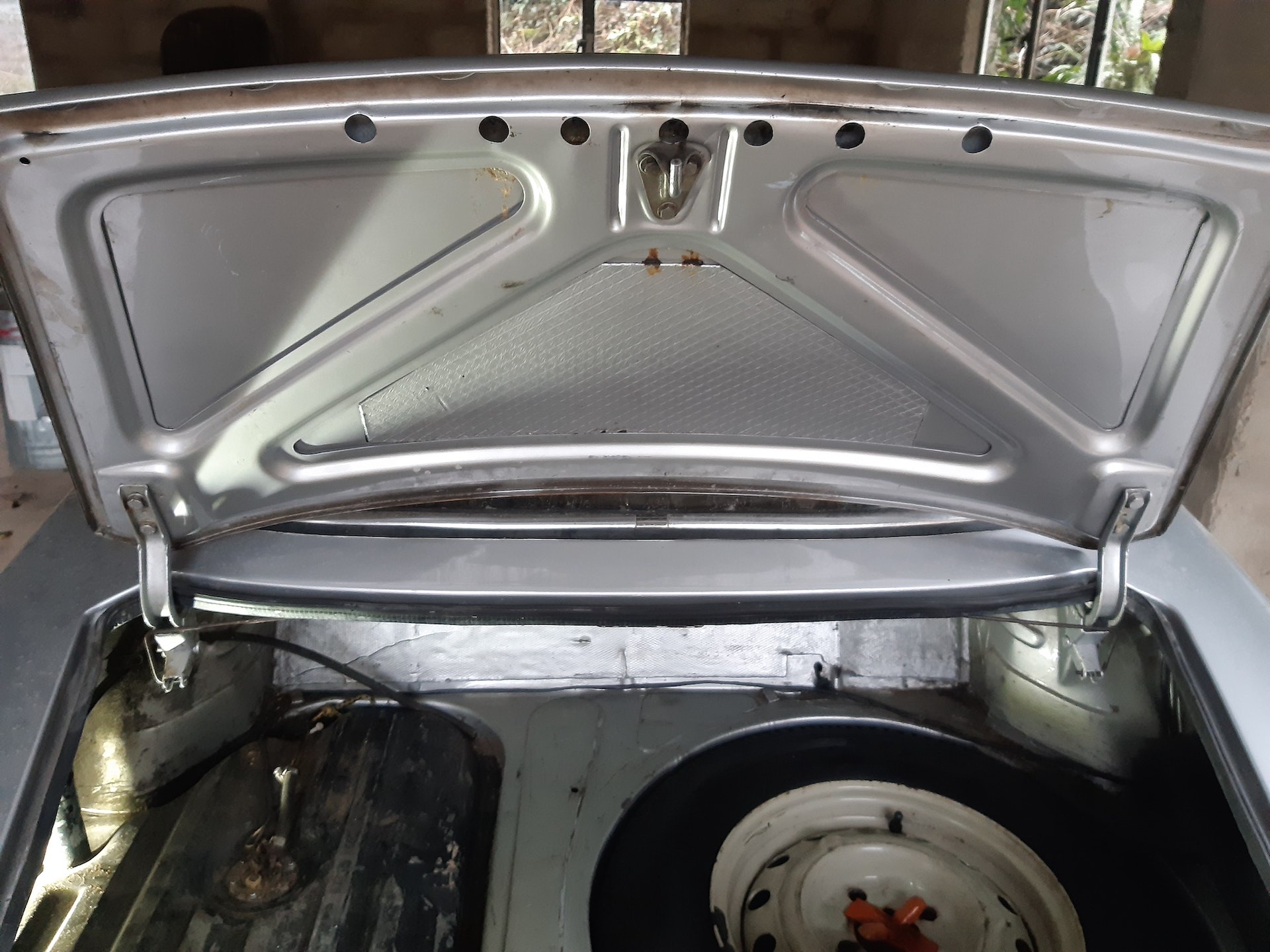 During the current owner’s time with the car, he has serviced it annually in a similar manner, making adjustments to mechanisms and replacing components as needed. The gearbox and differential have not been rebuilt by him, but most other moving parts have been refurbished or renewed. 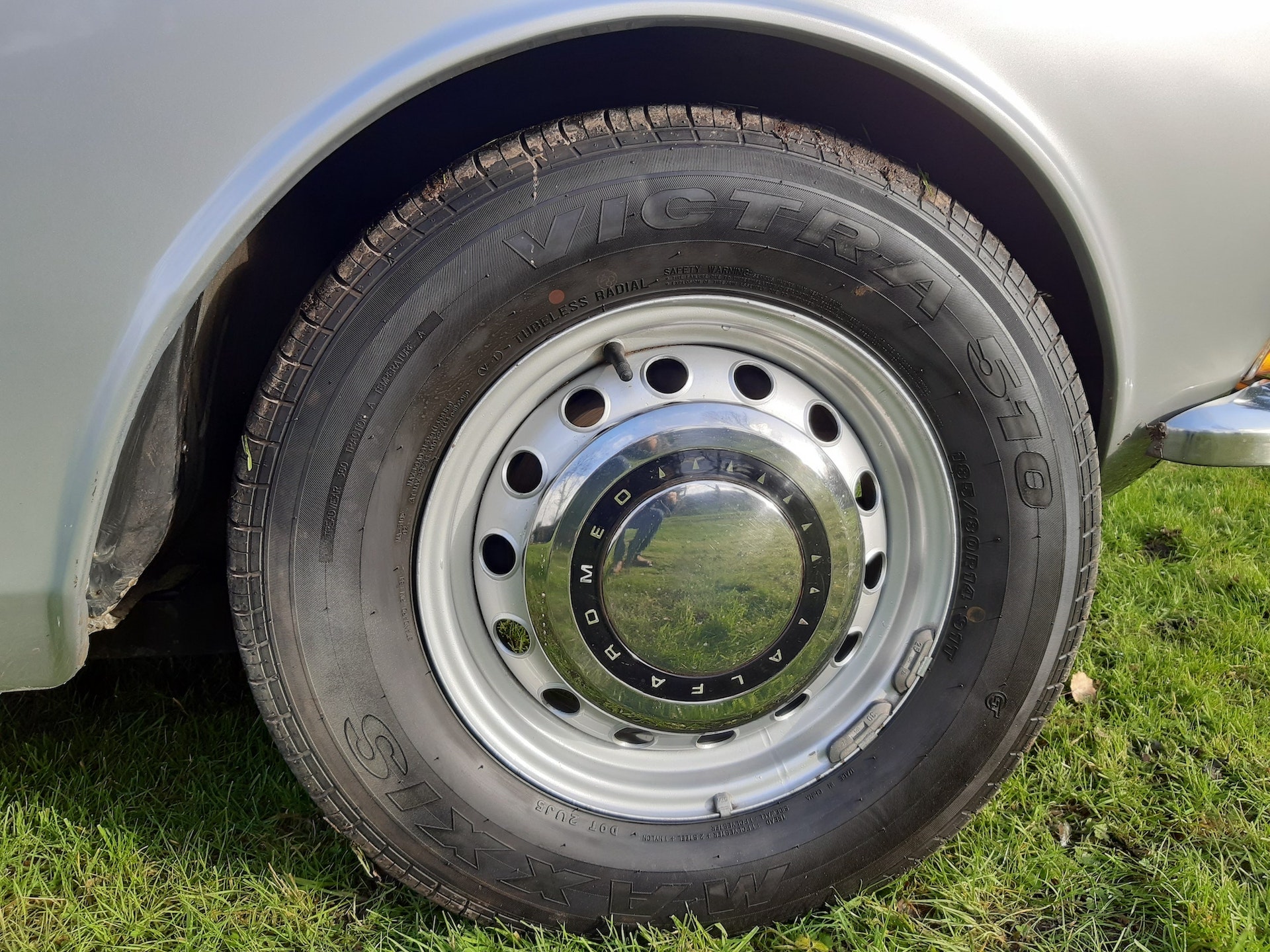 While the car is exempt from the annual MOT requirement, the most recent test was on 19 October 2016 at an indicated 47,984 miles (approximately 90,000 miles, corrected), which resulted in a first-time pass with only two advisories regarding a squeak in a nearside lower joint, and some slight play in the rear axle. The lower suspension bushes have since been replaced. The wheels are fitted with a set of Maxxis Victra 510 tyres, date-coded to 2015, which all have around 5mm of tread remaining. 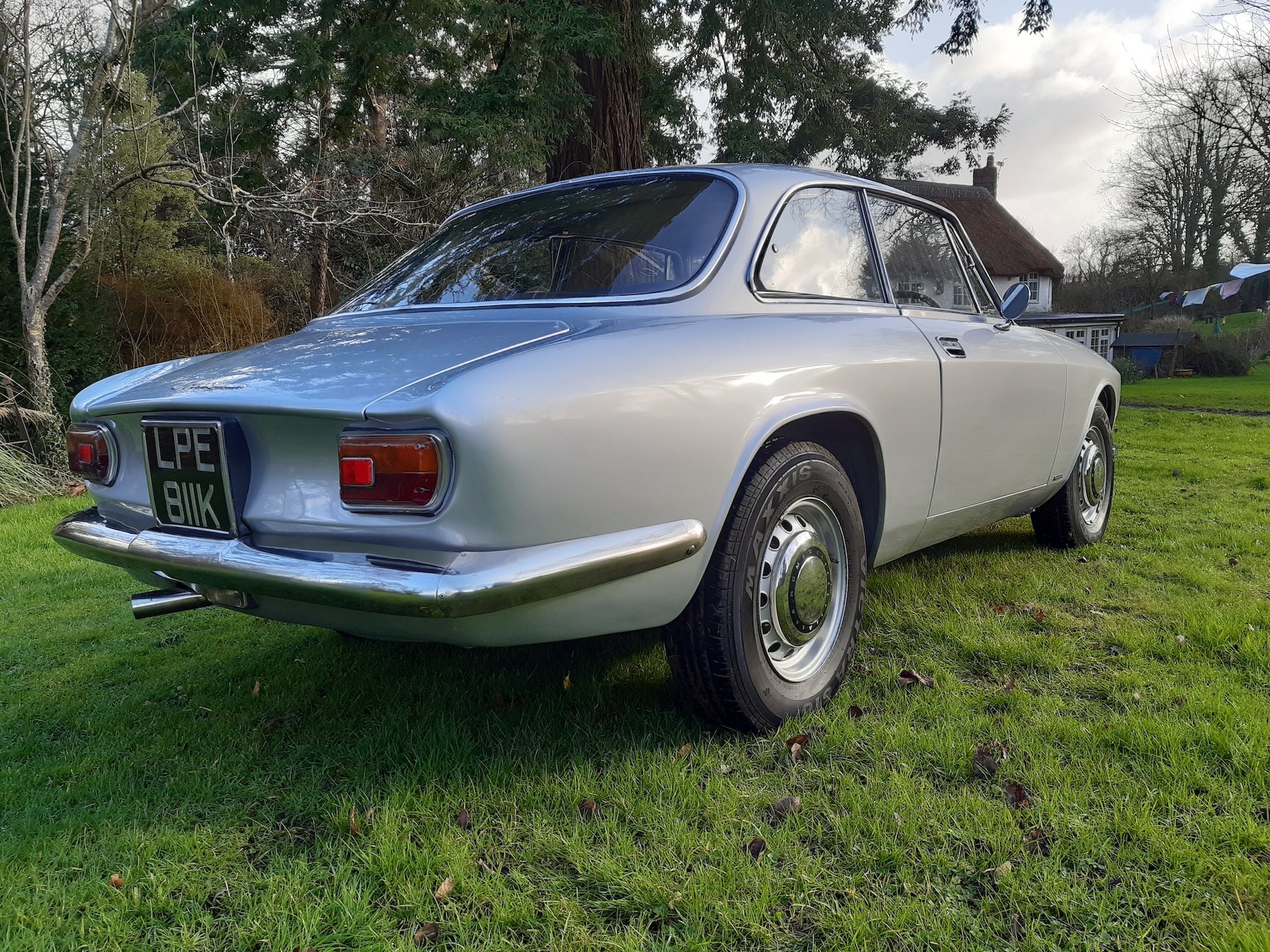 Accompanying the car is the original owner’s handbook, a tool kit and jack, and workshop manual. There is also a comprehensive history file detailing around £10,000 worth of maintenance work, in addition to the £15,000 body restoration. The original air box, steering wheel and mechanical distributor are also included. 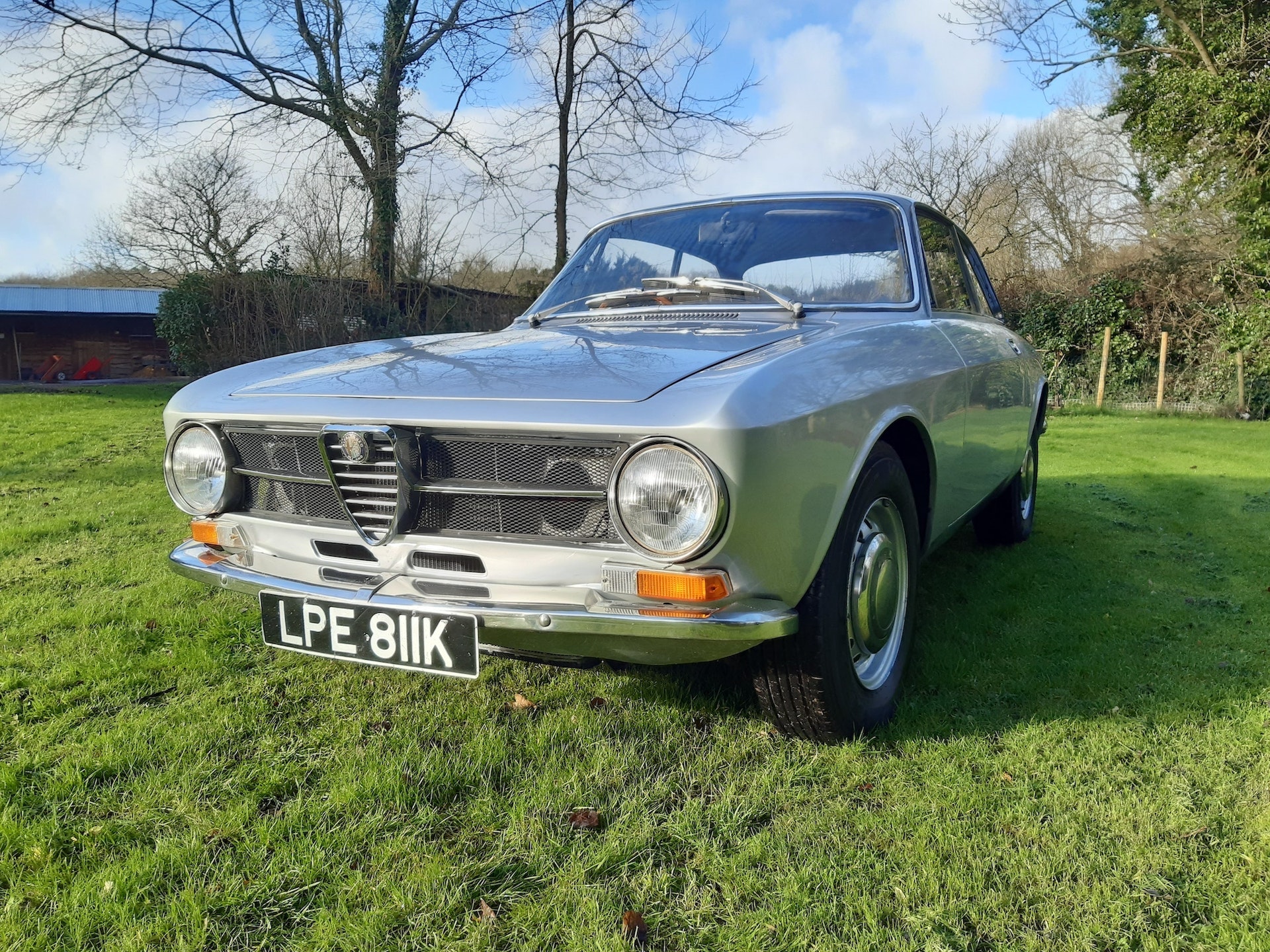 This Alfa Romeo GT Junior is an elegant 1970s coupe that boasts superb performance from the 2.0-litre twin-cam GT Veloce engine. It is a straight and solid example, which has been truly cherished by its current owner for nearly three decades. A car that presents beautifully both inside and out, and which will undoubtedly put a smile on the next owner’s face whenever they take it out for a drive.