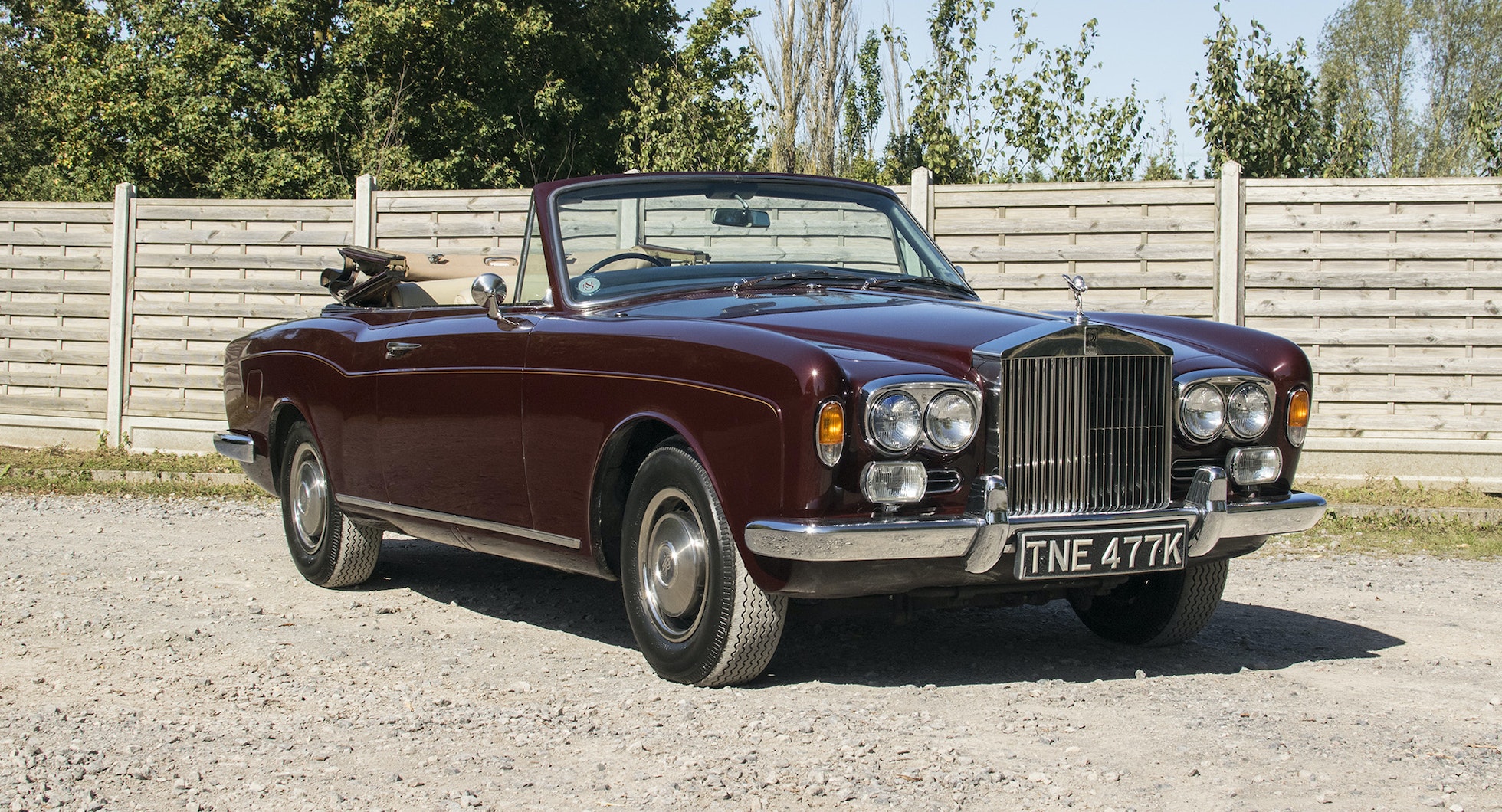 This 1971 Rolls-Royce Corniche is a wonderfully original example from the very first year of production, boasting unrepeatable rock-star provenance. For the 42 years from 1976 until 2018, the car was owned by founding member of The Moody Blues, Ray Thomas. He enjoyed around 15,000 miles behind the wheel from the late 1970s through to the 1990s. 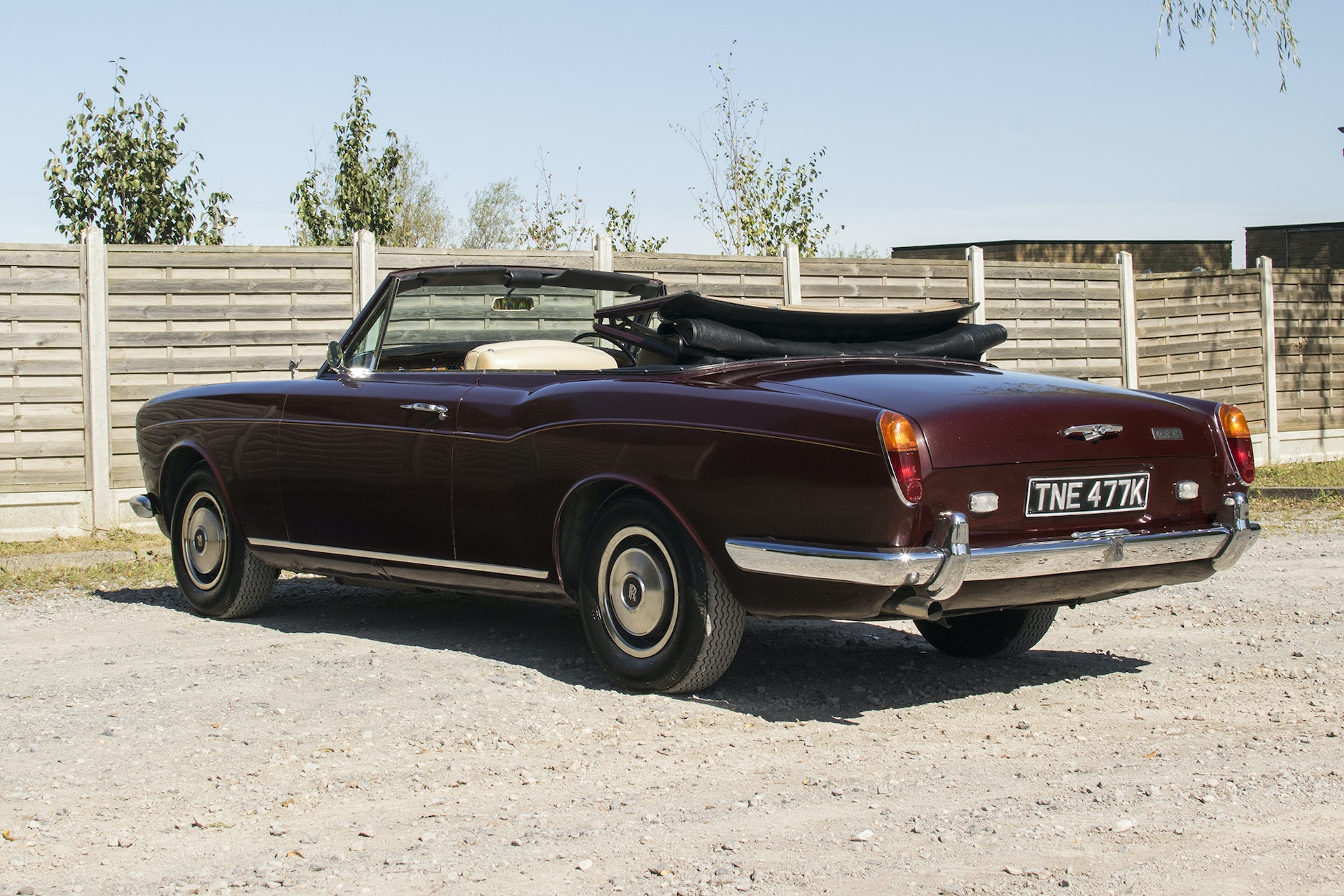 The last service on the car during Ray’s ownership is understood to have been in February 1998, carried out by specialist Royce Service and Engineering (RSE) in Surrey. The Corniche was then transported from the workshop directly to his house, where it was carefully wheeled into his garage, only to be left there for the next 20 years as his health declined. 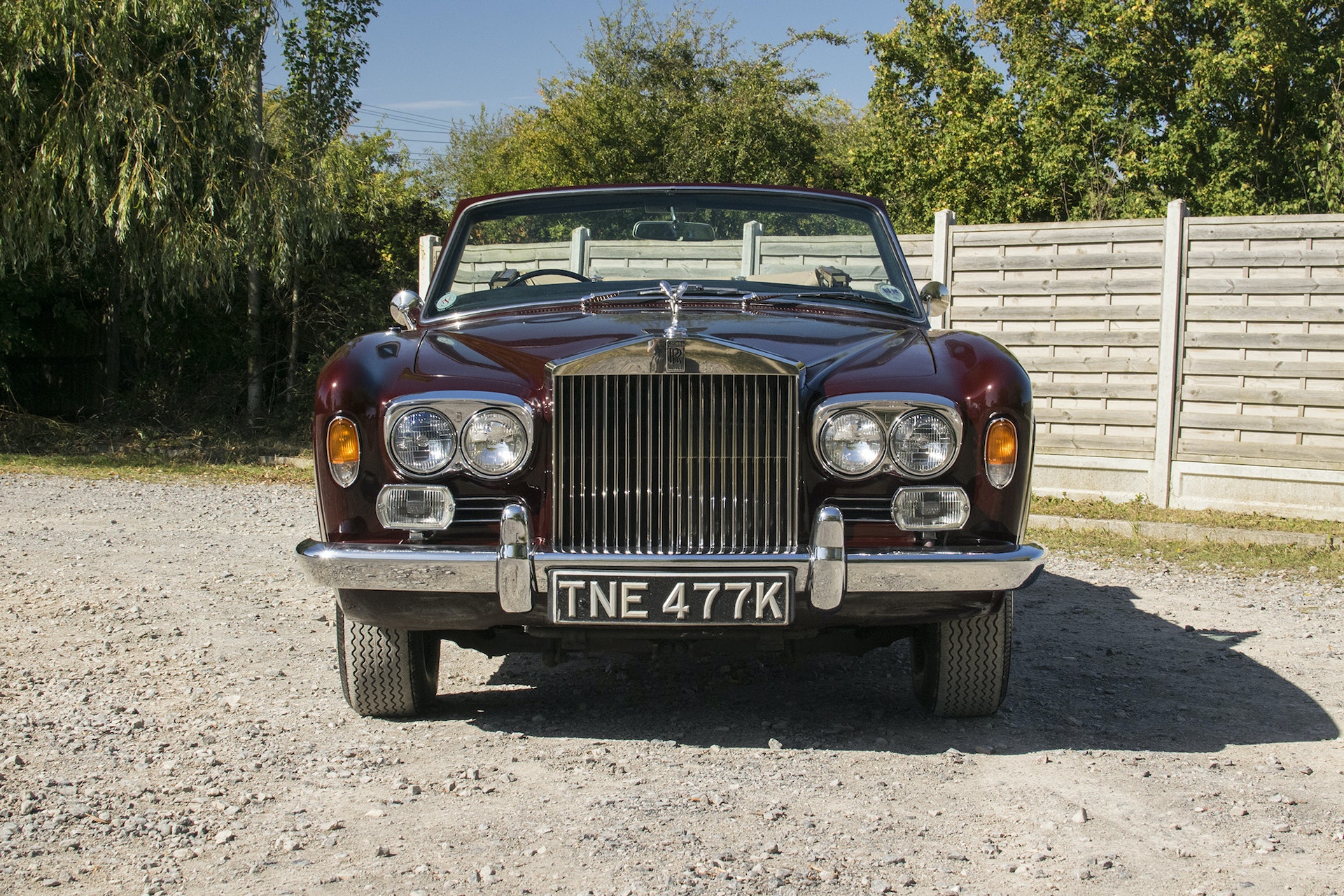 Ray Thomas passed away in January 2018, and was posthumously inducted into the Rock and Roll Hall of Fame in April 2018. His 1971 Rolls-Royce Corniche is a genuine ‘garage find’, discovered by classic car restorer Simon Browse after a tip-off by a relative. Having being introduced to Ray’s widow, Lee Thomas, Simon set about awakening this glorious open-top cruiser from its two-decade slumber. 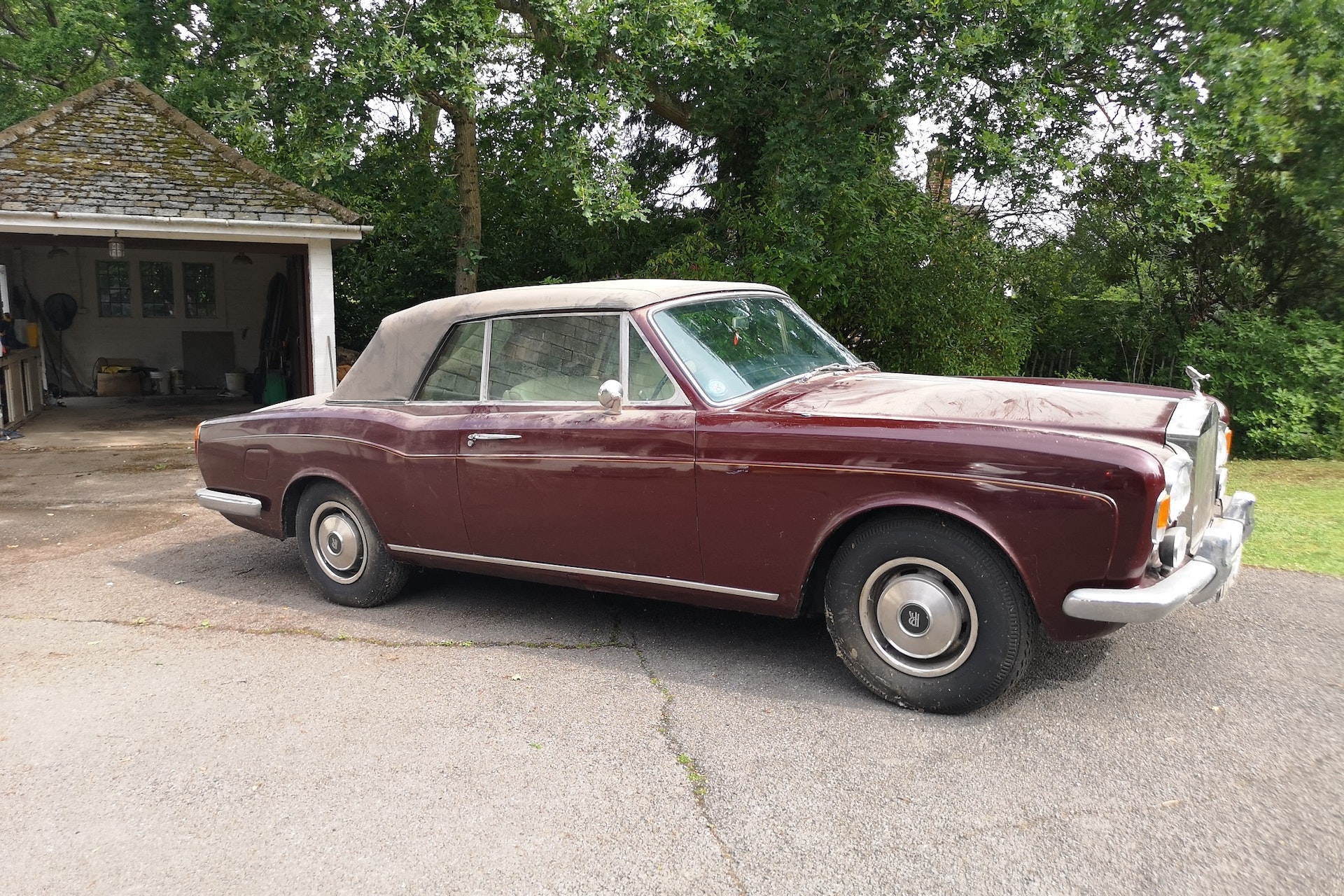 A copy of the complete factory build file for the car, which has been supplied by the Rolls-Royce Enthusiasts’ Club, confirms that the Corniche was assembled, tested and perfected between August and November 1971. The supplying dealer, Mead Cockshoot Ltd of Manchester, issued its invoice to the buyer on Christmas Day.

The car was registered in January 1972 to its first owner, Mr Norton of Cheshire, after final testing and delivery with 358 miles on the odometer. It is believed that Mr Norton was the only keeper before Ray Thomas acquired the Corniche in June 1976. The car is understood to have worn the registration plate ‘TNE 477K’ from new. 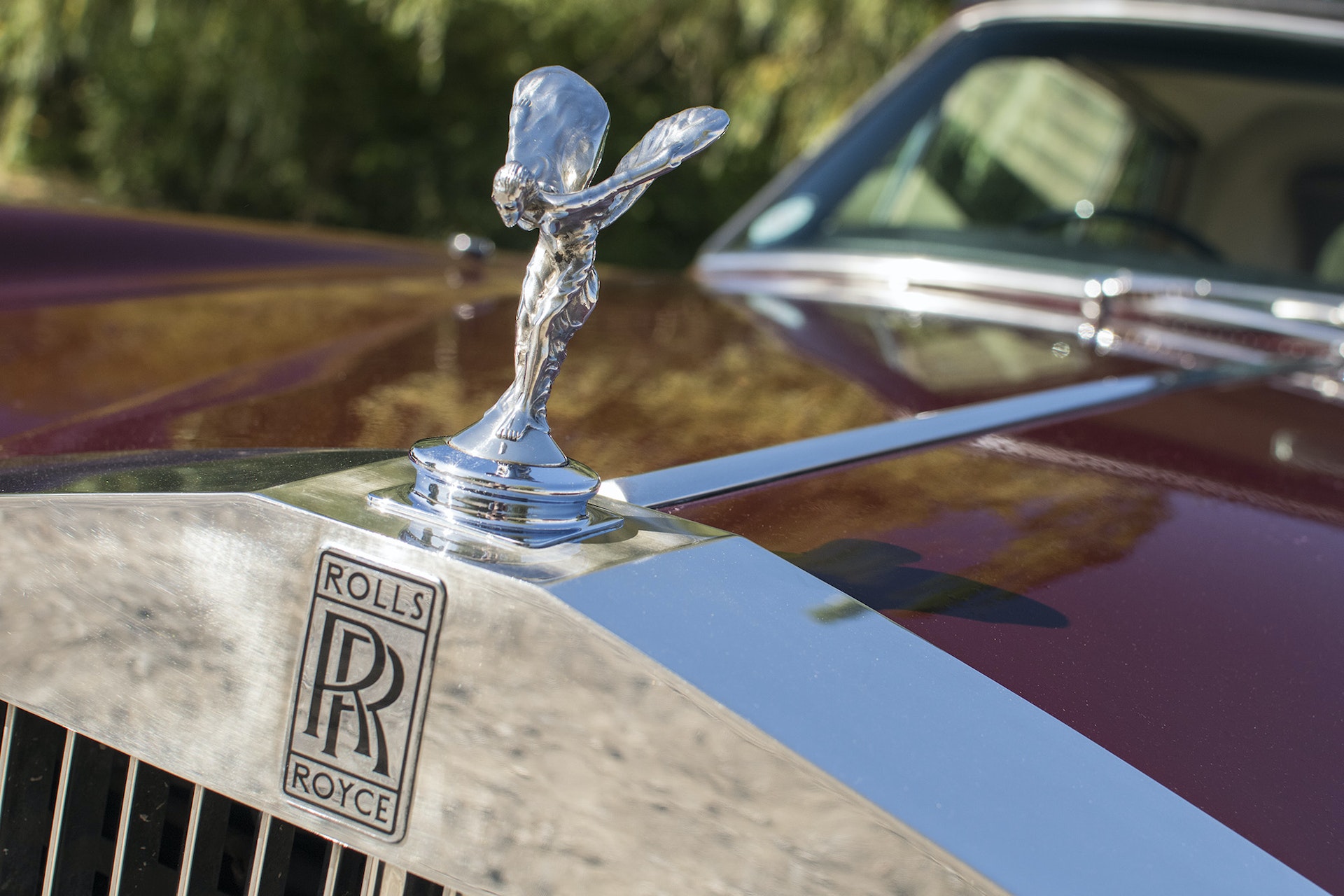 As a ‘first series’ Corniche, it boasts arguably the most handsome appearance of the model, with slim chrome bumpers and the elegant early interior. For those less familiar with the model, the coachwork was by H.J. Mulliner Park Ward. Power came from Rolls-Royce’s 6.75-litre alloy-block V8 engine running on twin SU carburettors, coupled to a three-speed automatic transmission. 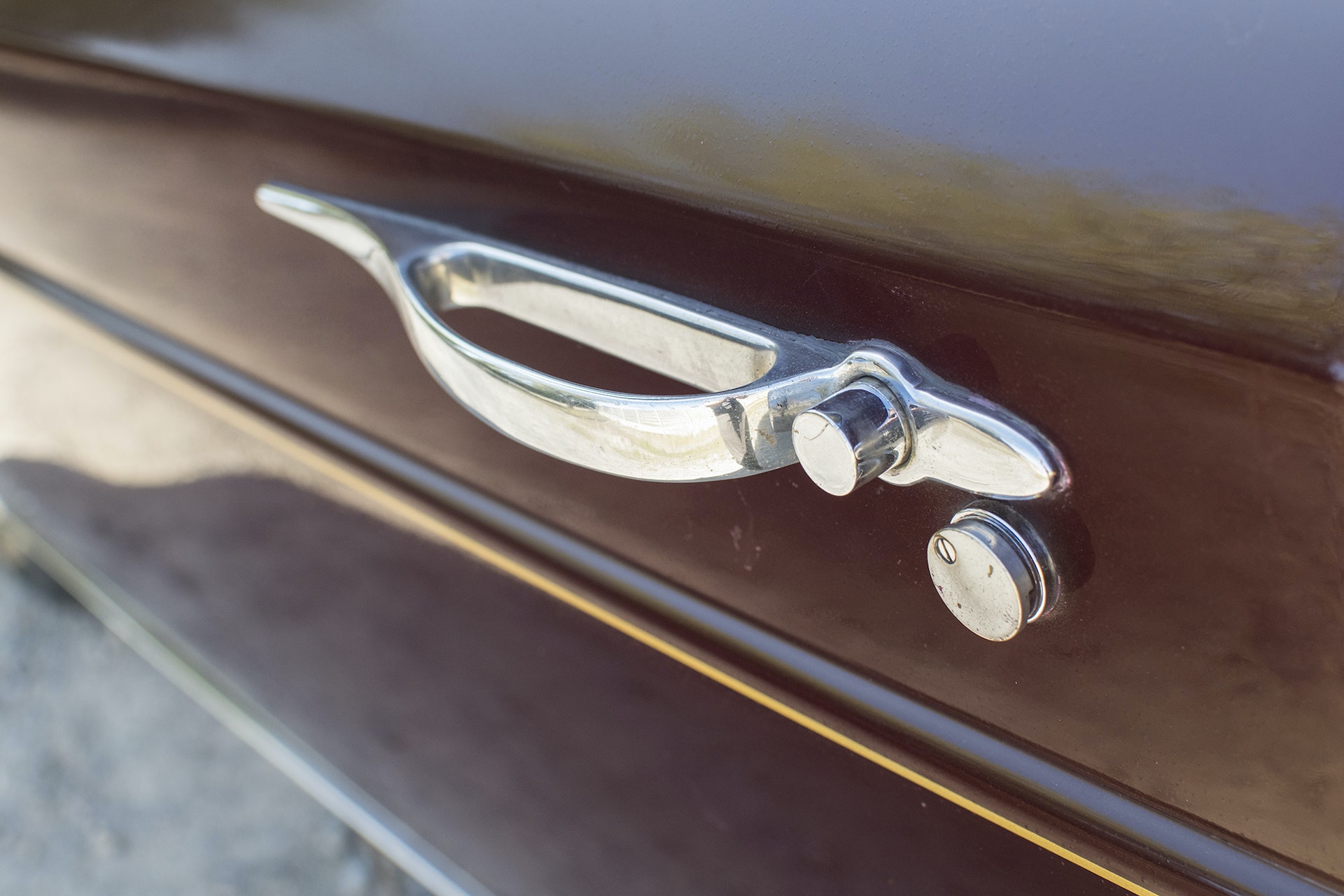 The specification for this car included paintwork in the rare Black Cherry colour, complemented by a hand-painted coachline in gold. Its cabin was trimmed in luxurious Connolly Vaumol leather in beige, along with beige headlining and Cumberland Stone carpets. Additional equipment on the order included Lucas fog lamps, automatic speed control, an internally-adjustable driver’s door mirror, fire extinguisher and a Radiomobile ‘Stereo 8’ tape player. 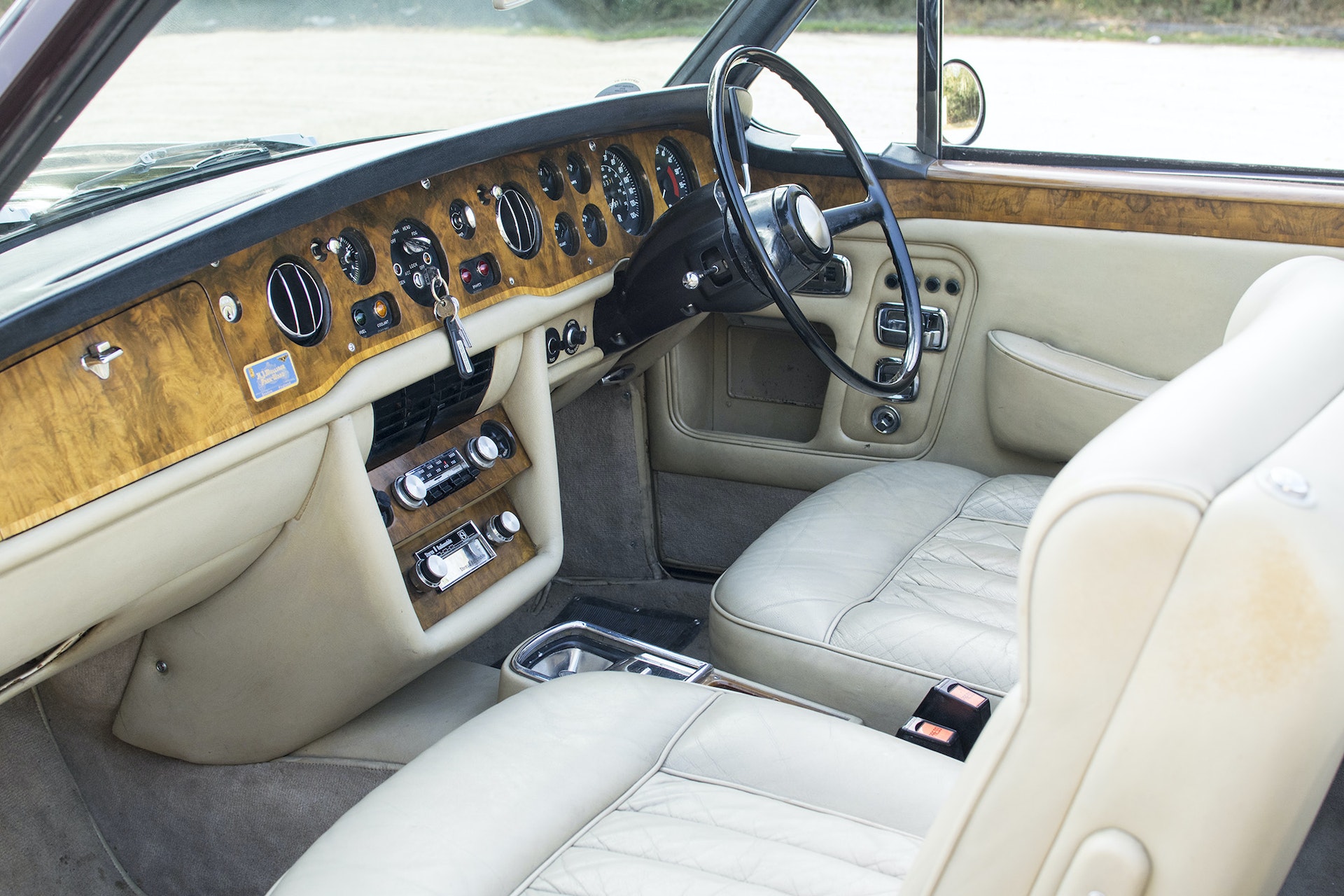 Today, the paintwork is believed to be all original. Having been laid up in a garage for 20 years without turning a wheel, its condition is as you would expect from a car approaching its 50th birthday. There is lacquer peeling on the bonnet and tops of the front wings, which does not affect other panels. A few chips in the paint along the wings and swage line are also shown in the media gallery below. 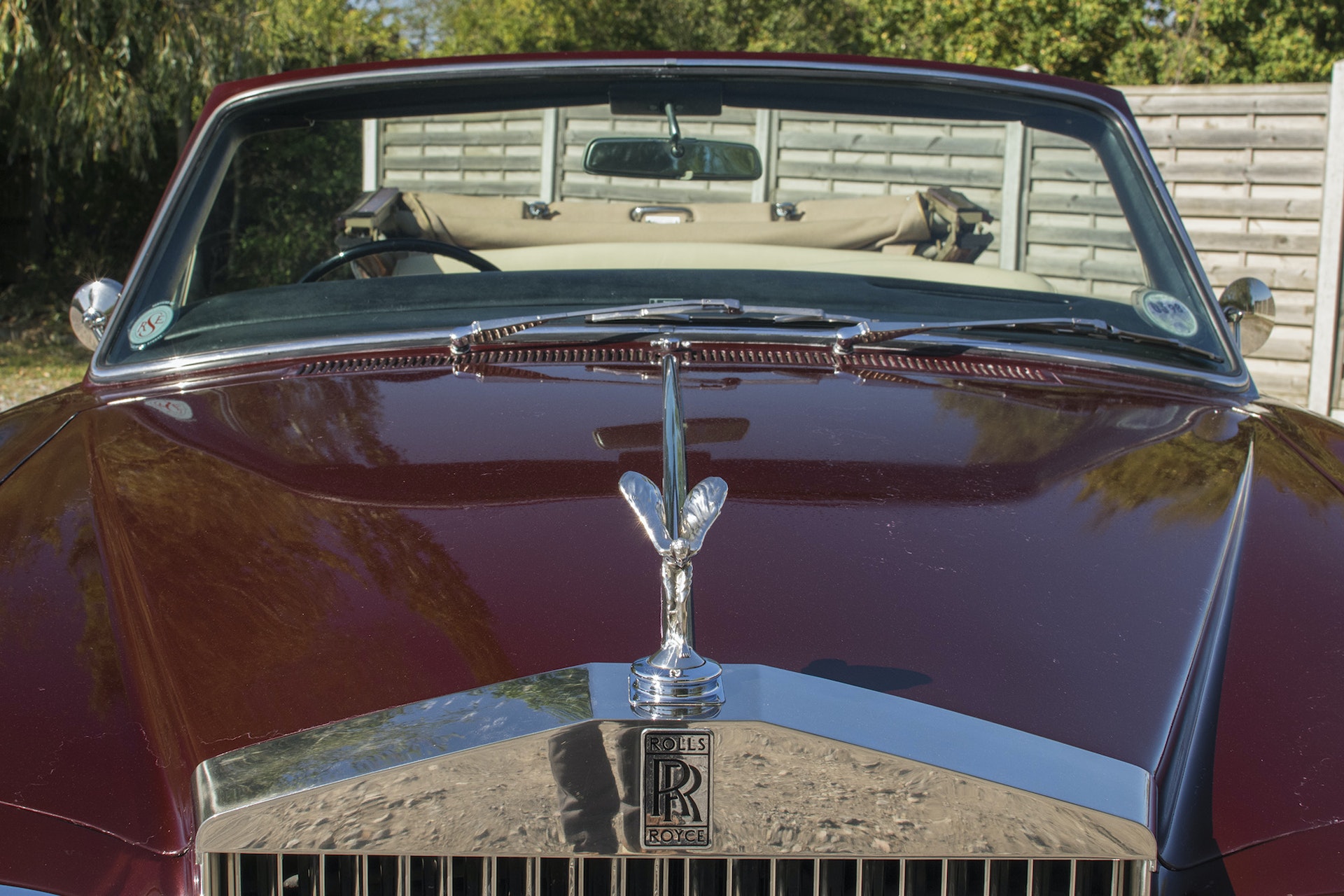 Looking around the car shows the shut lines are superb, and there is absolutely no indication of any impact damage to the body or bumpers. The door jambs and shuts are in great shape, with no signs of corrosion. Its original sill covers are still present, featuring the H.J. Mulliner Park Ward engraved plates. 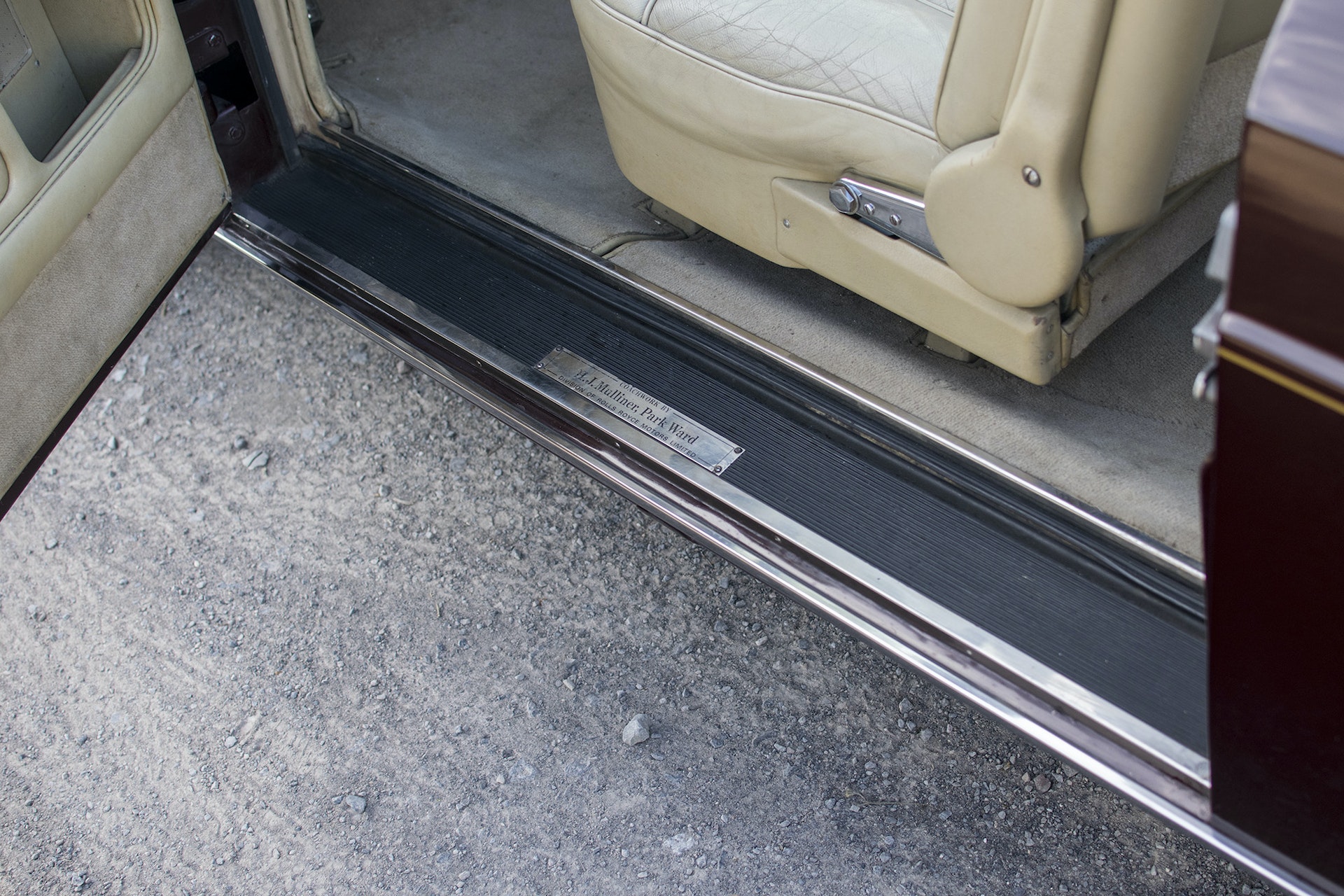 Rather than leave a coat of dust all over the car to mask any imperfections, its coachwork has been lightly cleaned and polished. As you approach it for the first time, it looks absolutely superb. On closer inspection there is of course micro-blistering present in most of the paintwork to varying degrees. There is also a soft dent in the centre of the bootlid, with some paint cracking, where the car seems to have been leant on in the past. 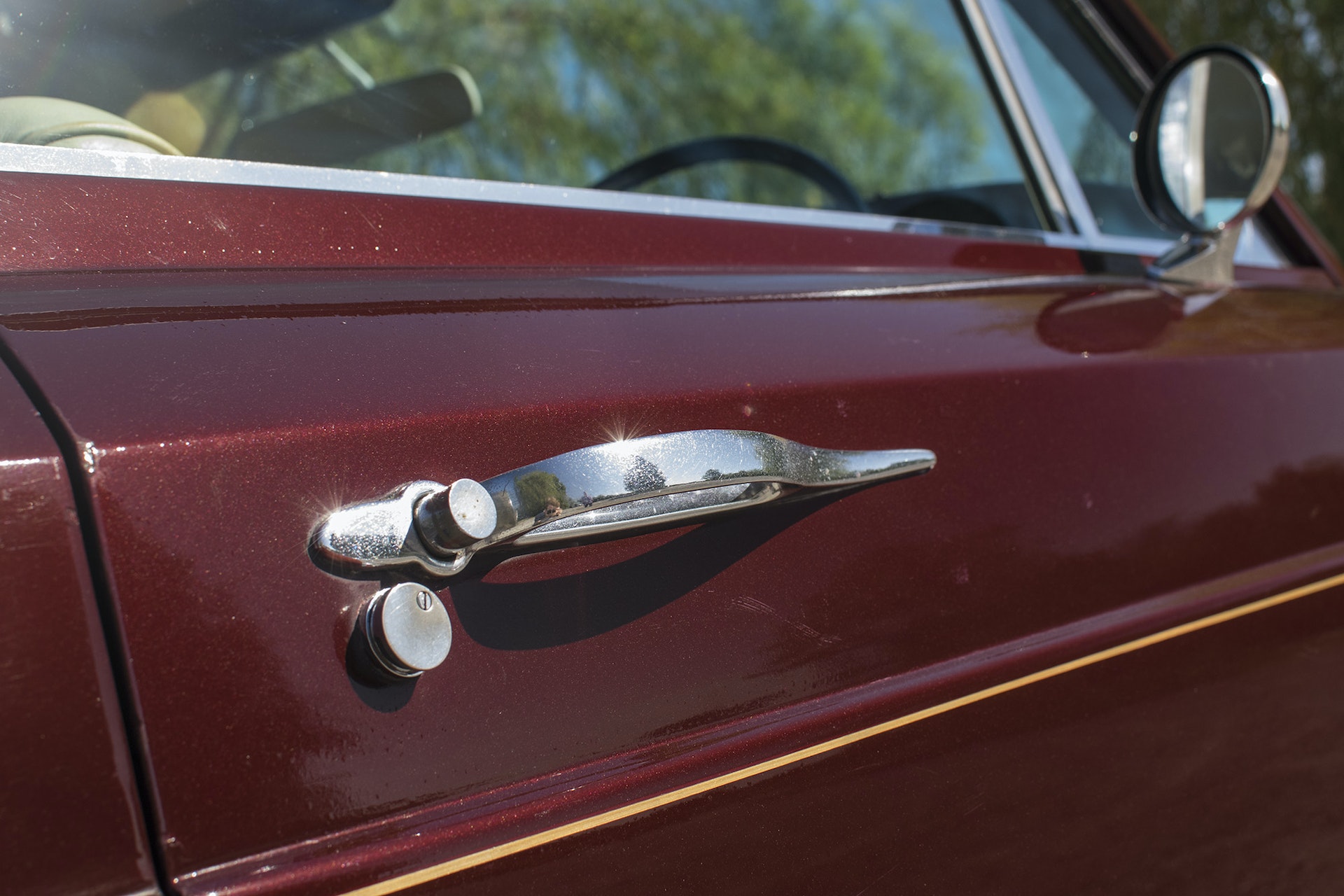 After a clean and a polish, the brightwork was found to be in terrific condition, with a few minor chips in the chrome but virtually no pitting anywhere on the car. Its iconic ‘Parthenon’ grille is as bright and imposing as when the car was new. All of the lenses around the body are the correct Lucas items, although the offside sealed beam headlight is not currently functioning. The car sits on its original 15-inch wheels, which are all in very good condition, each retaining their RR-monogrammed hubcaps. 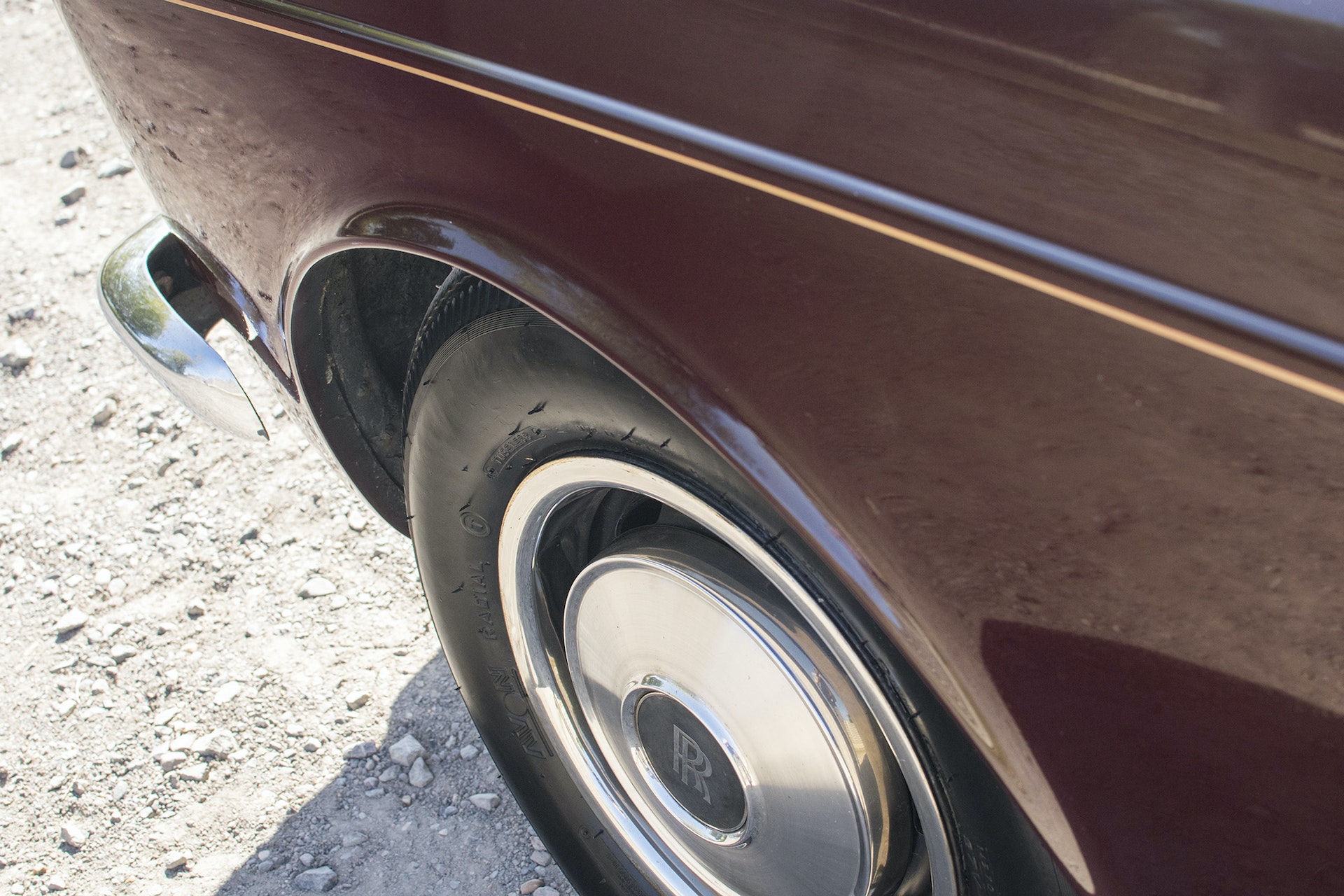 The windscreen is in fine condition with no damage and a good seal. The side window glasses are also in great shape. Its original black Everflex vinyl roof is in very good order, with a wonderfully deep colour and an electric folding mechanism that works perfectly. The rear acrylic window is also sound, with no clouding or damage. The tonneau cover for the hood is still stored in the boot, but having never been out of its bag in at least two decades prior, the material is in poor condition and needs to be replaced with a new item. 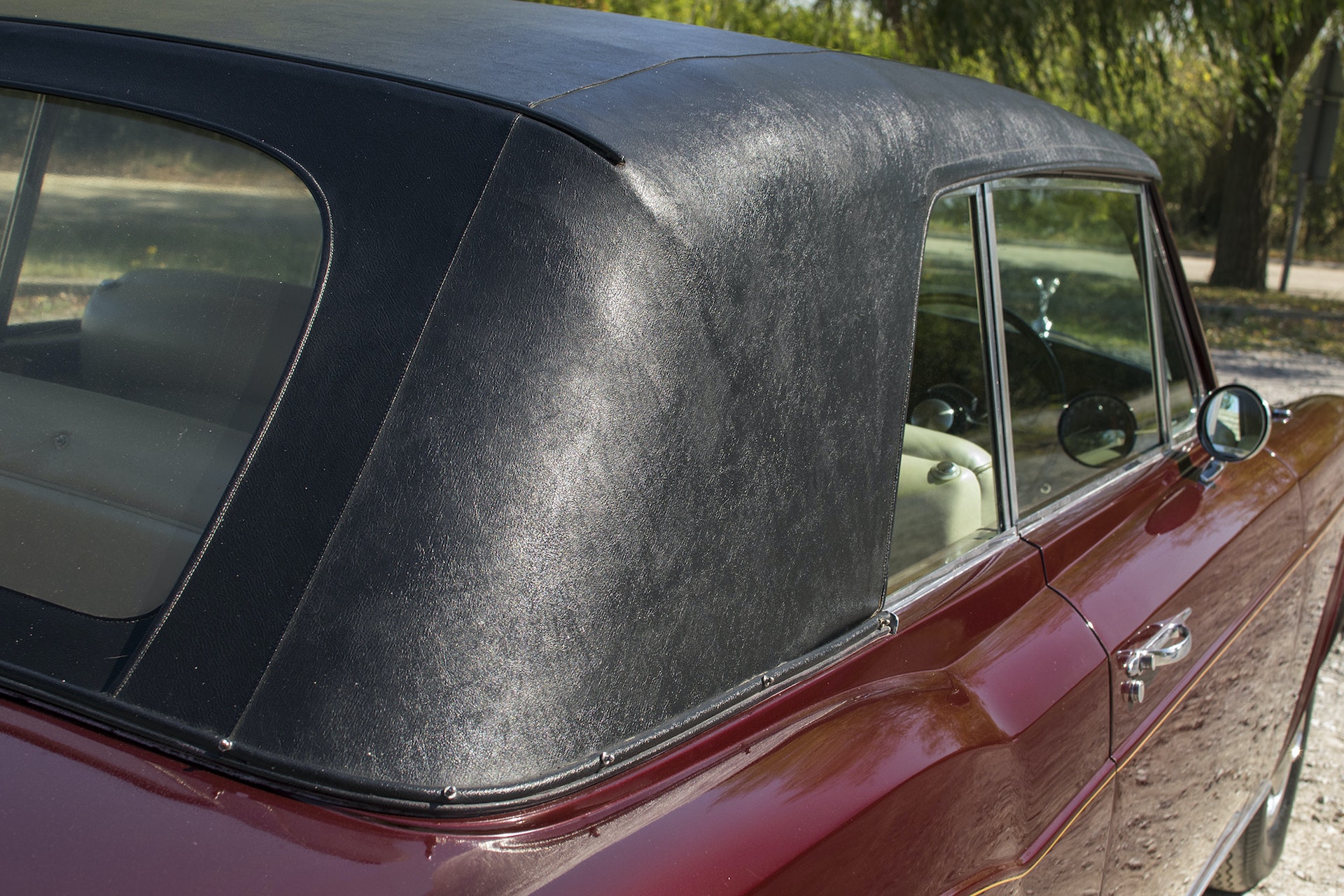 Its glamorous interior is still very smart throughout, with no rips or holes in the beige leather, which is supple and only shows light signs of use. It has been deep-cleaned and re-connolised in places, but the materials are all original. The plastics for the steering wheel and switchgear needed only a thorough clean to bring them back to a great standard. 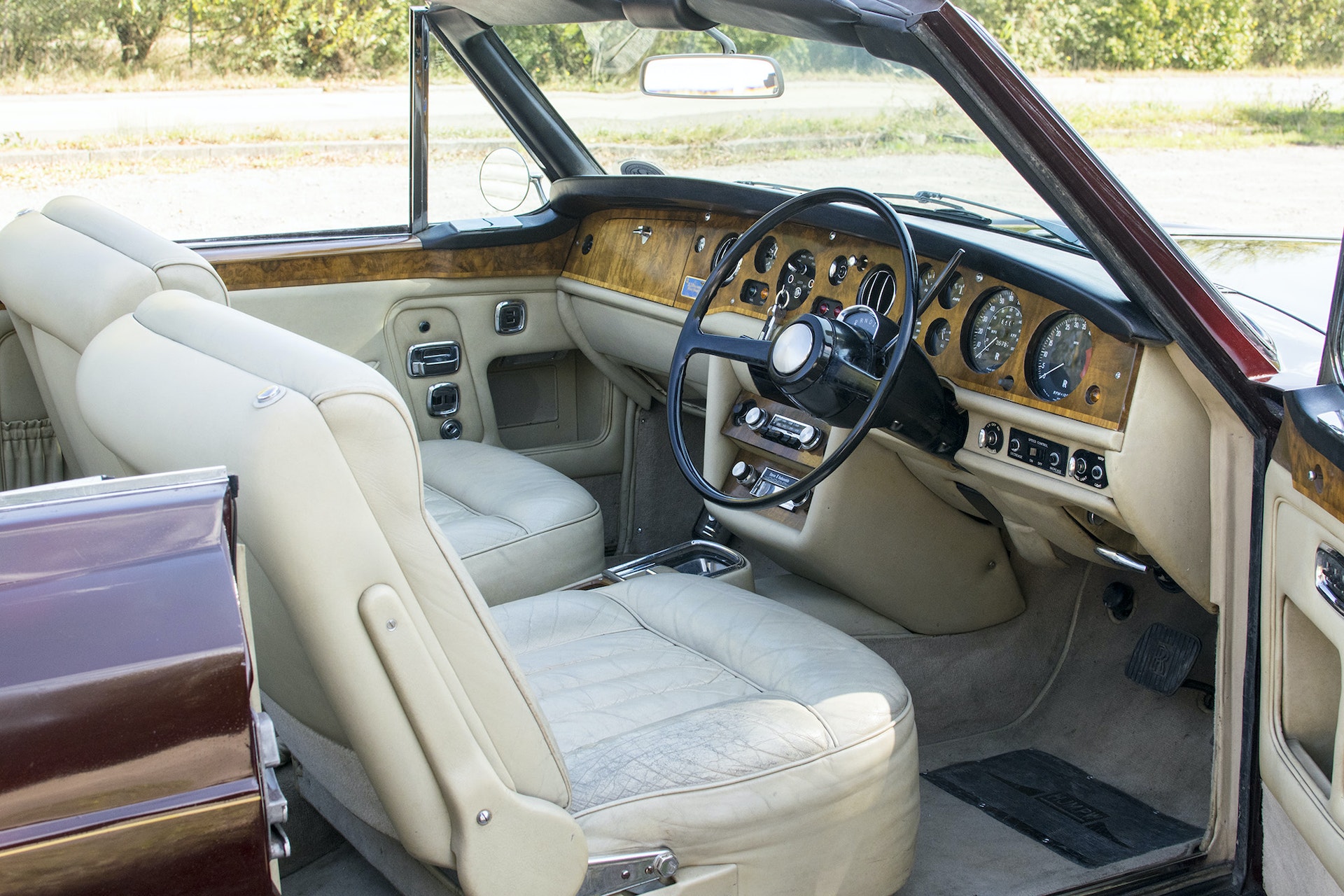 Smiths instrument dials feature across the dashboard, and are all free of damage with clear cover panels. There are no known faults with any of the electrics, and the ‘final inch’ hydraulic closure buttons for the side windows work perfectly. Its centre console is still equipped with the Radiomobile stereo fitted by the factory. The glove box was found to contain the emergency window winder tool, as well as a copy of ‘Days of Future Passed’ by The Moody Blues on 8-track tape - which will of course accompany the car. 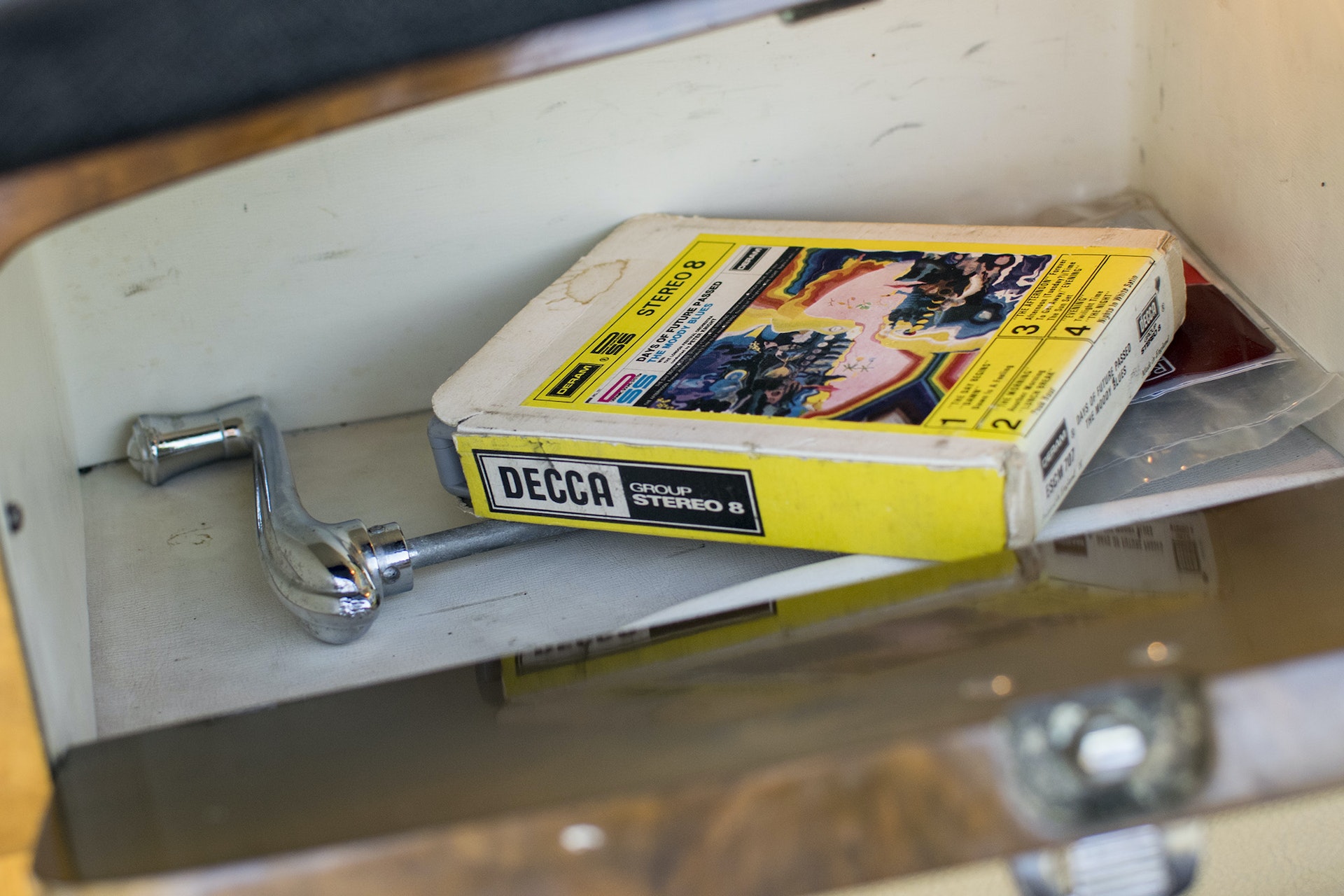 The boot lining and carpet are in very good order, though the rubber seal around the closure has cracked with age and would benefit from being replaced. The lid itself opens and shuts with ease, and the original jacking kit is still present. 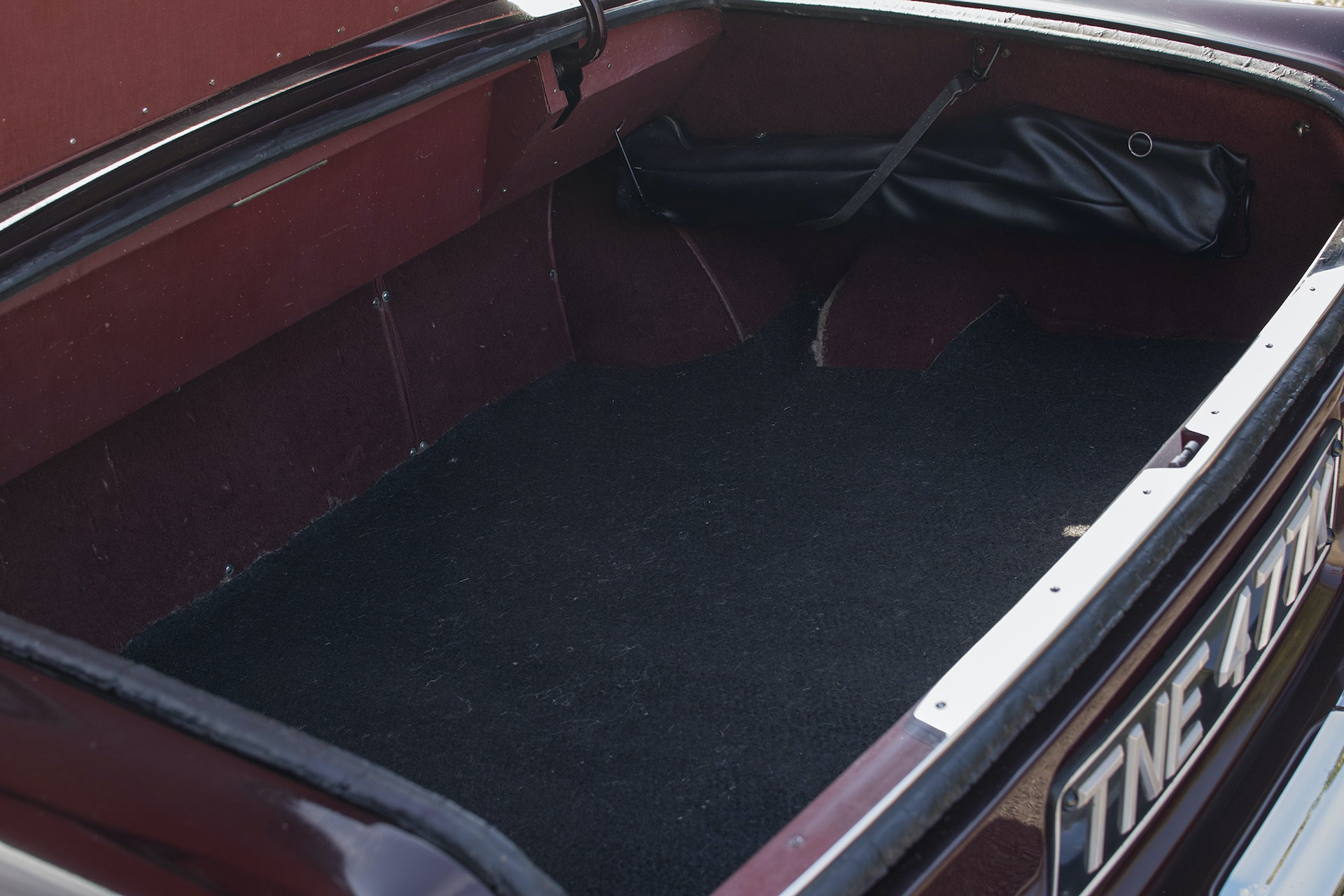 Tucked in the corner of the windscreen is the last ‘Next Service Due’ reminder from Royce Service and Engineering. It advised Mr Thomas that the car should be returned to them in August 1998 or at 41,665 miles - whichever came sooner. Of course, that service never happened, but the vendor has ensured that the car has gone through a thorough inspection and recommissioning to make it safe and reliable on the road. 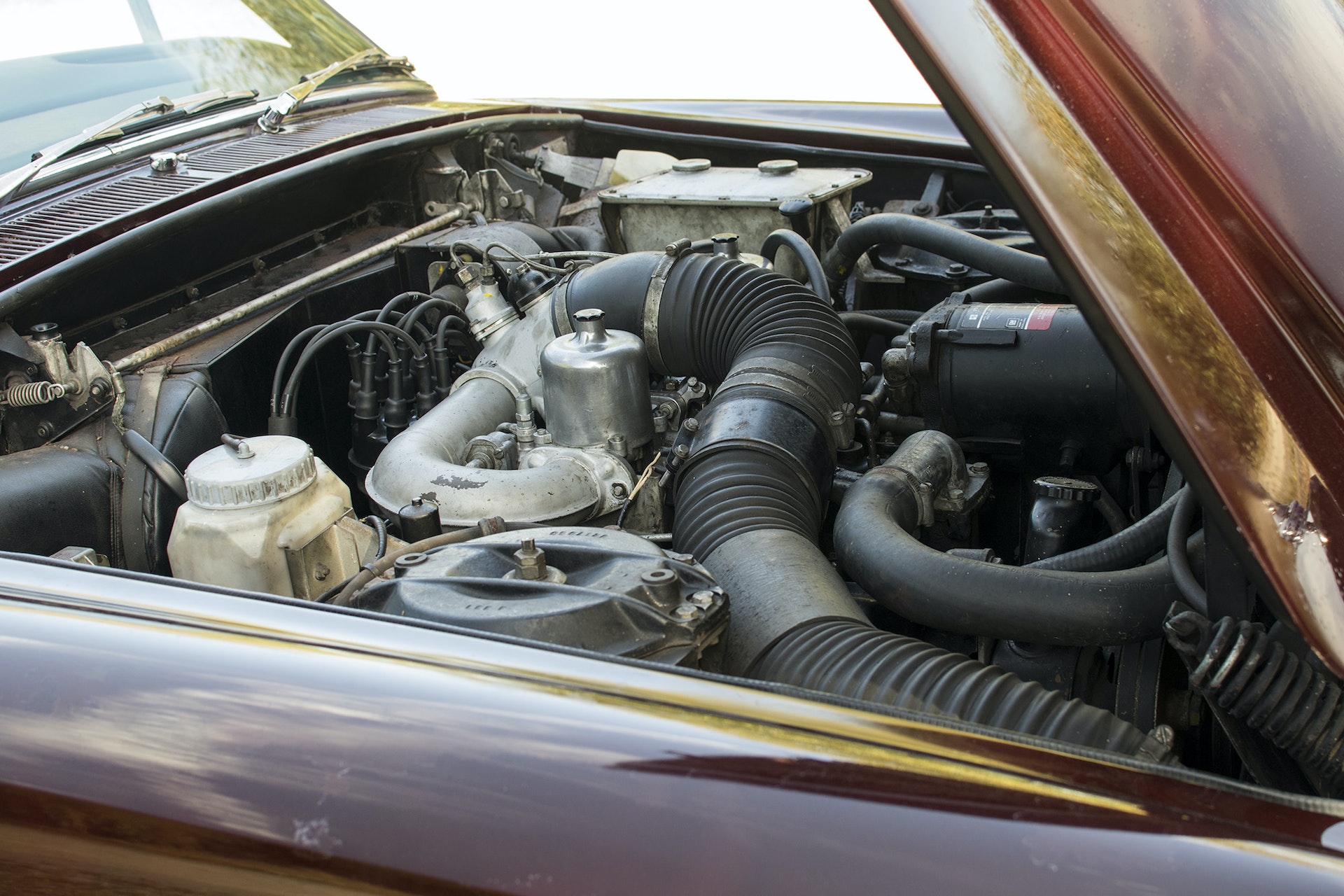 While the Corniche was still cocooned in its garage, Simon Browse went to work under the bonnet to get the car running again. This included replacing the ignition, distributor cap, rotor arm, condenser and points, and removing the spark plugs to give them a light clean and resetting the gaps. The system was sparking and engine turning over freely, but was not firing up. By temporarily removing the induction pipe and using some starting aid, the Rolls-Royce finally fired up for the first time in 21 years. 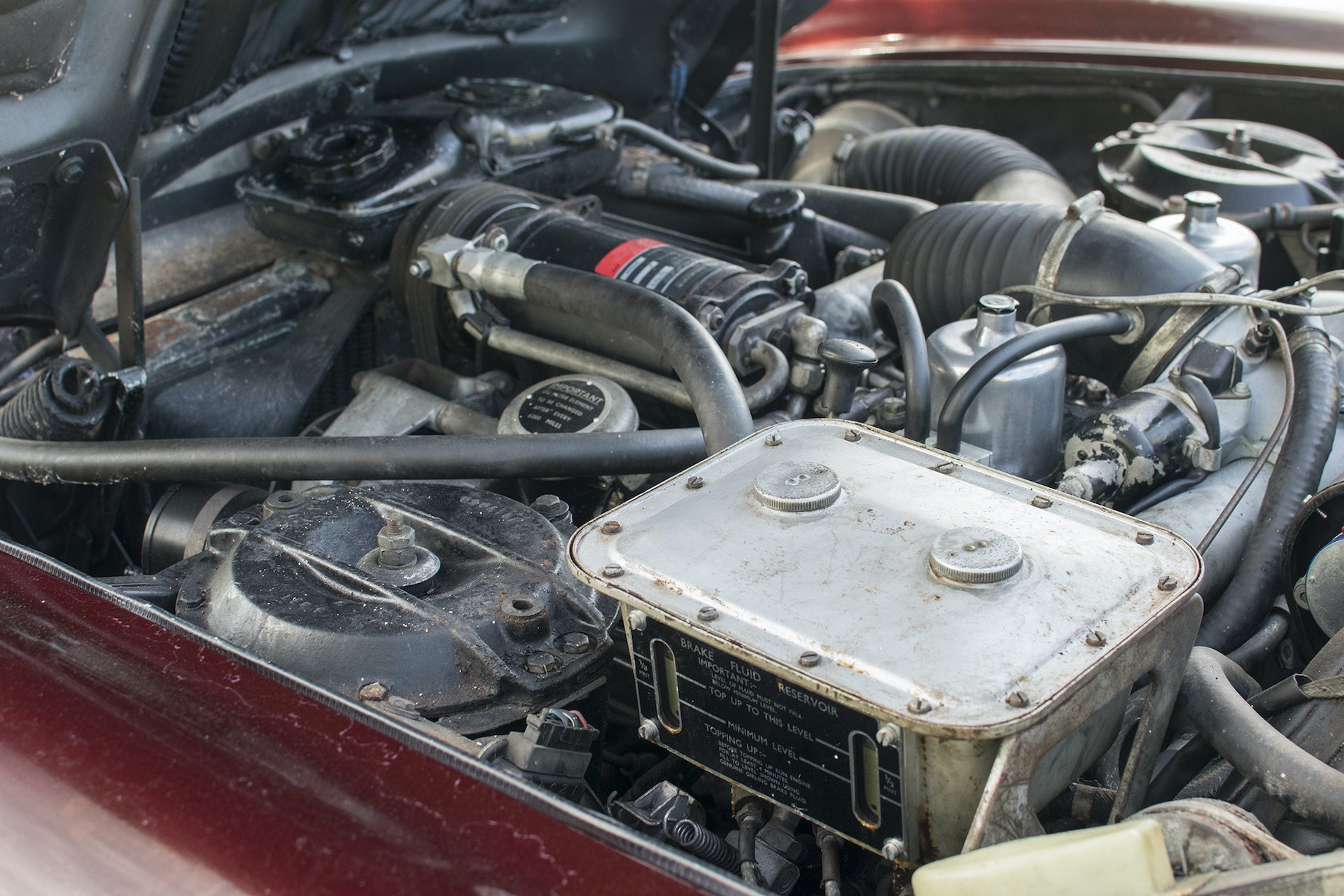 Since being driven out of the garage under its own power, all of the Corniche’s fluids have been renewed as a matter of course. The specialist who did the work mentioned that, on condition alone, the old lubricants were remarkably clear and uncontaminated. Other maintenance on the Rolls-Royce has included fitting a new battery, a fresh set of spark plugs and replacing the rear running light bulbs. 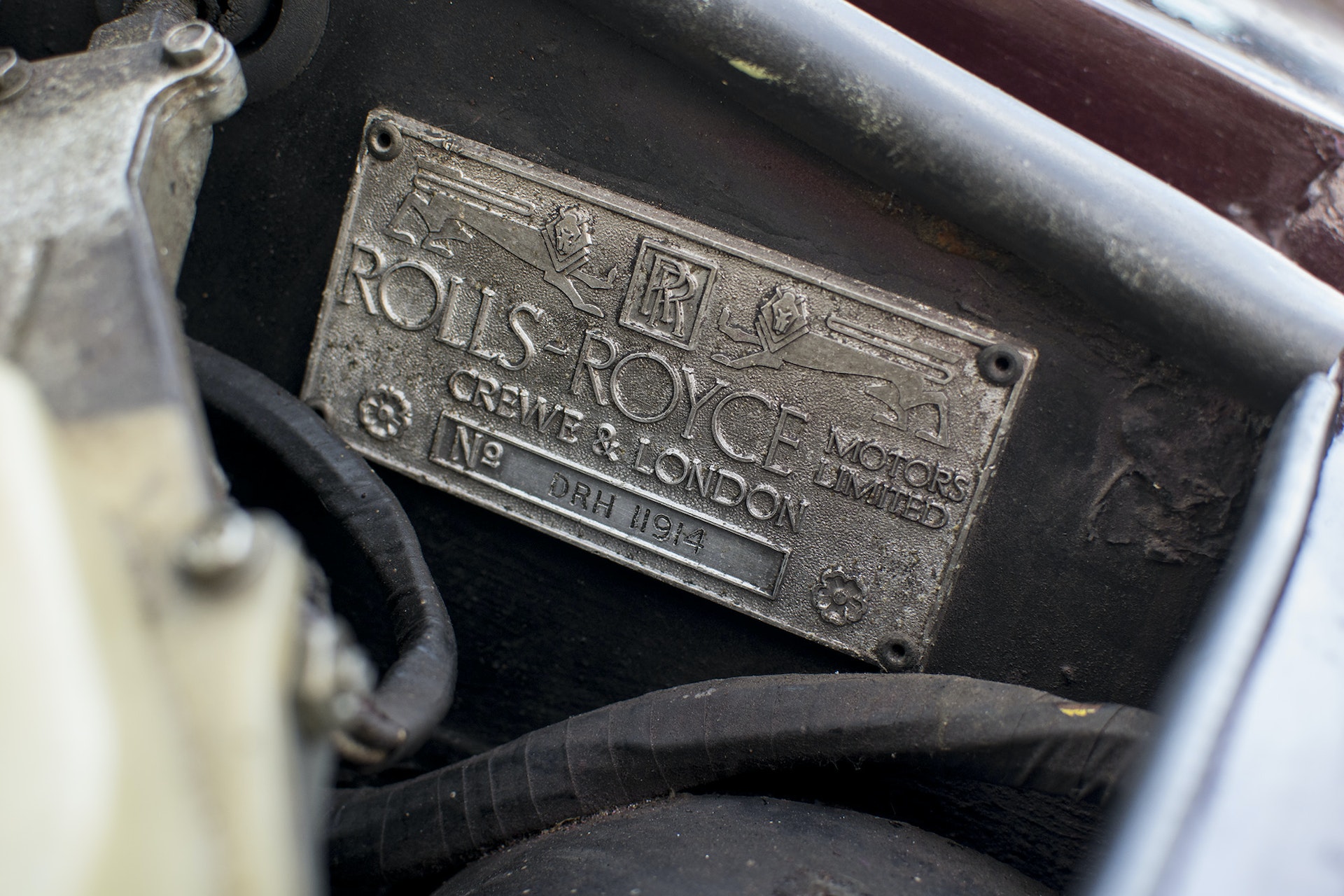 The carburettors have been removed, cleaned out and fully reset, and the double-acting SU fuel pumps have been rebuilt. The fuel tank and lines have also been flushed. Rolls-Royce and Bentley specialist Overton Vehicles was commissioned to replace the brake pump seals and rebuild the accumulator valves and spheres. 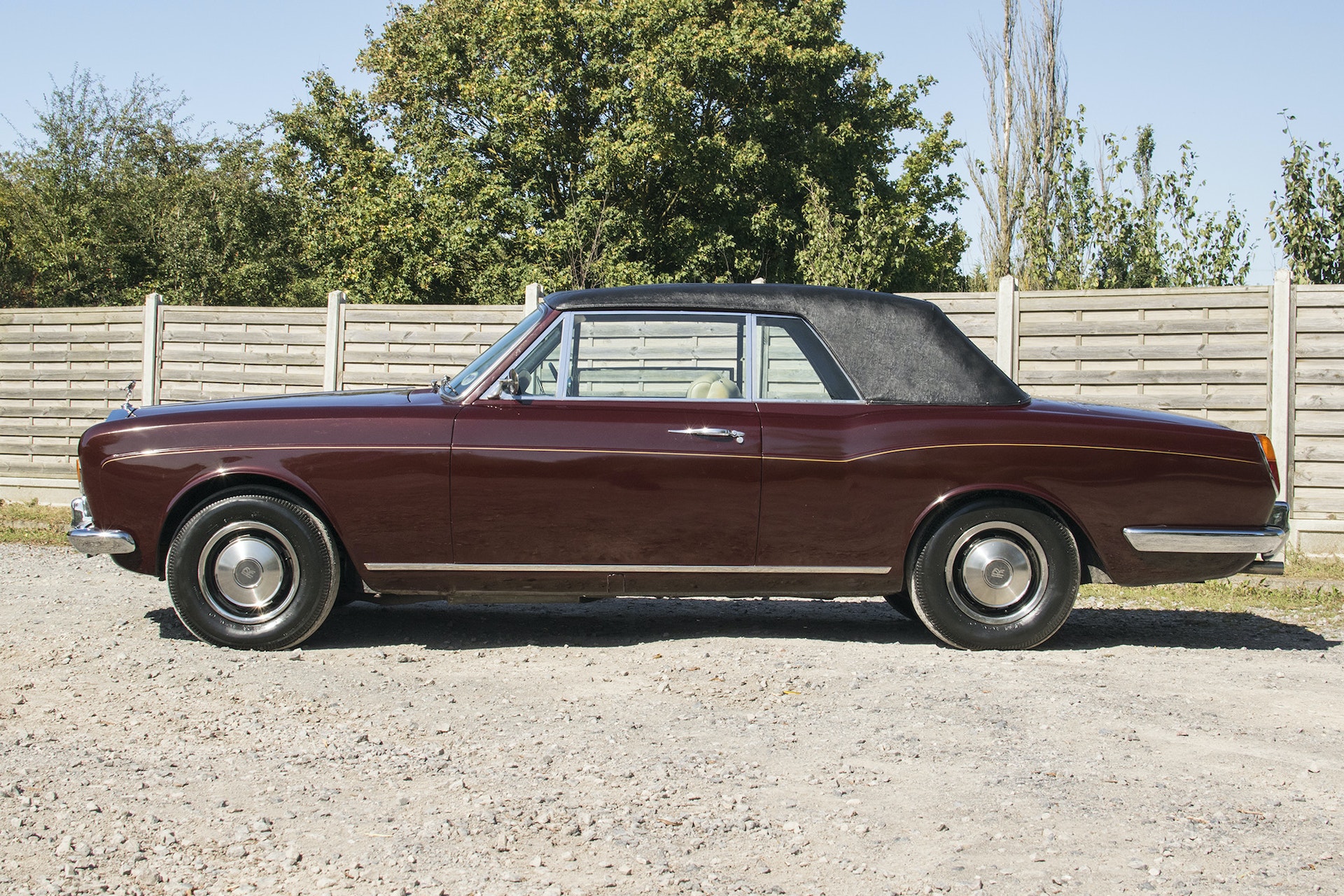 Its original tyres were still holding air in the garage, but were squared-off by sitting stationary for so long. Therefore, the vendor has just fitted a brand-new set of Avon Radial tyres in size 205 R15 all round. After all of this work had been completed, the car was put through an MOT test on 23 September 2019, which it passed first time with absolutely no advisories or warnings - a testament to its detailed recommissioning. 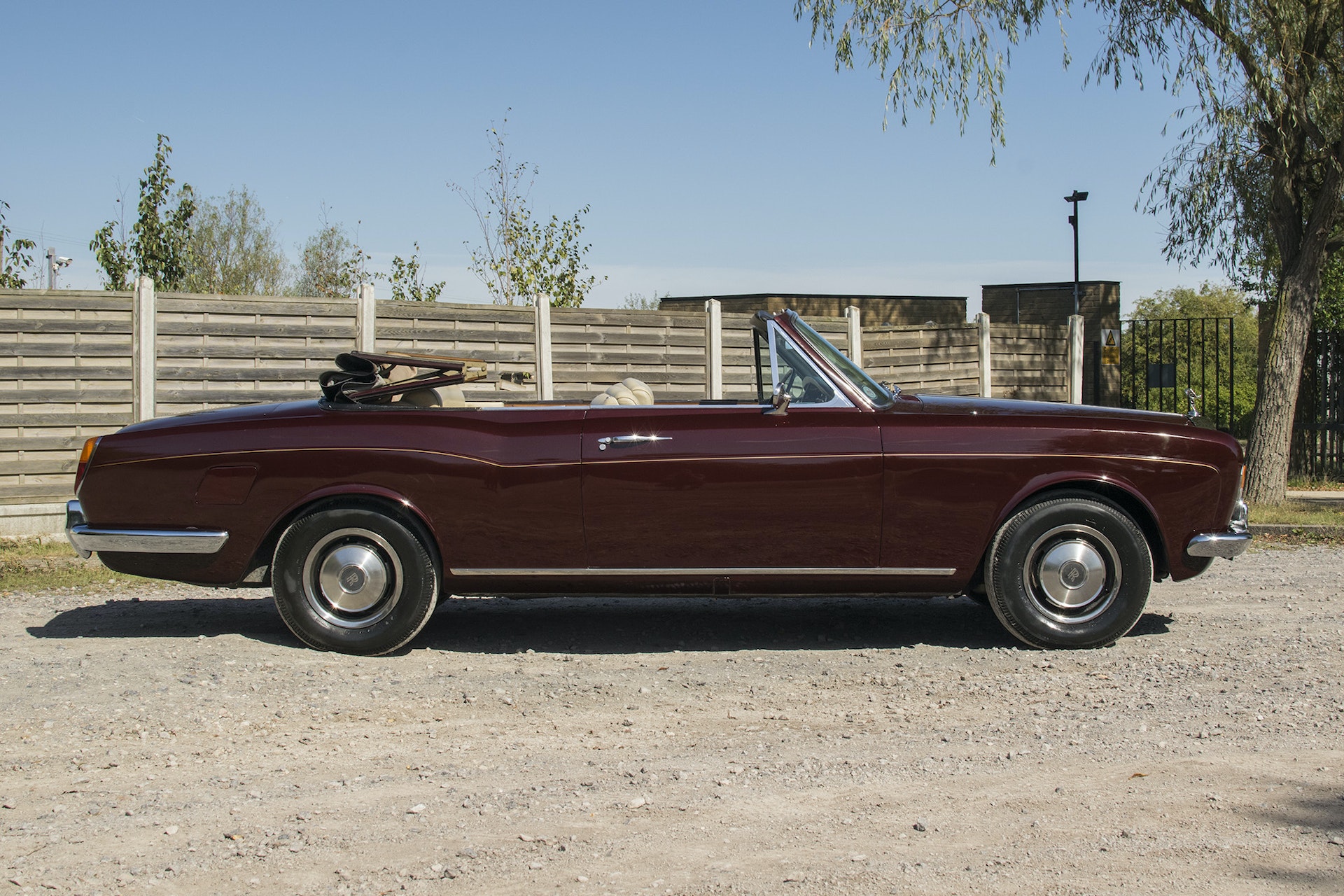 Accompanying the car is an original 1970s registration document in Ray Thomas’ name, as well as a temporary cover note for the car from the London and Edinburgh General Insurance Company, dated to June 1976. An MOT certificate from April 1976, when the mileage stood at 20,058 miles, is also in the file.

The car is sold with its original factory-supplied handbook and the stamped service booklet, as well as a copy of ‘Rolls-Royce: The history of the car’ by Martin Bennett, which was given to Ray Thomas by the previous owner. Finally, along with a full copy of the Construction and Test Records file from RREC, the Corniche is also warranted by a letter of authenticity signed by Ray’s widow, Lee Thomas. 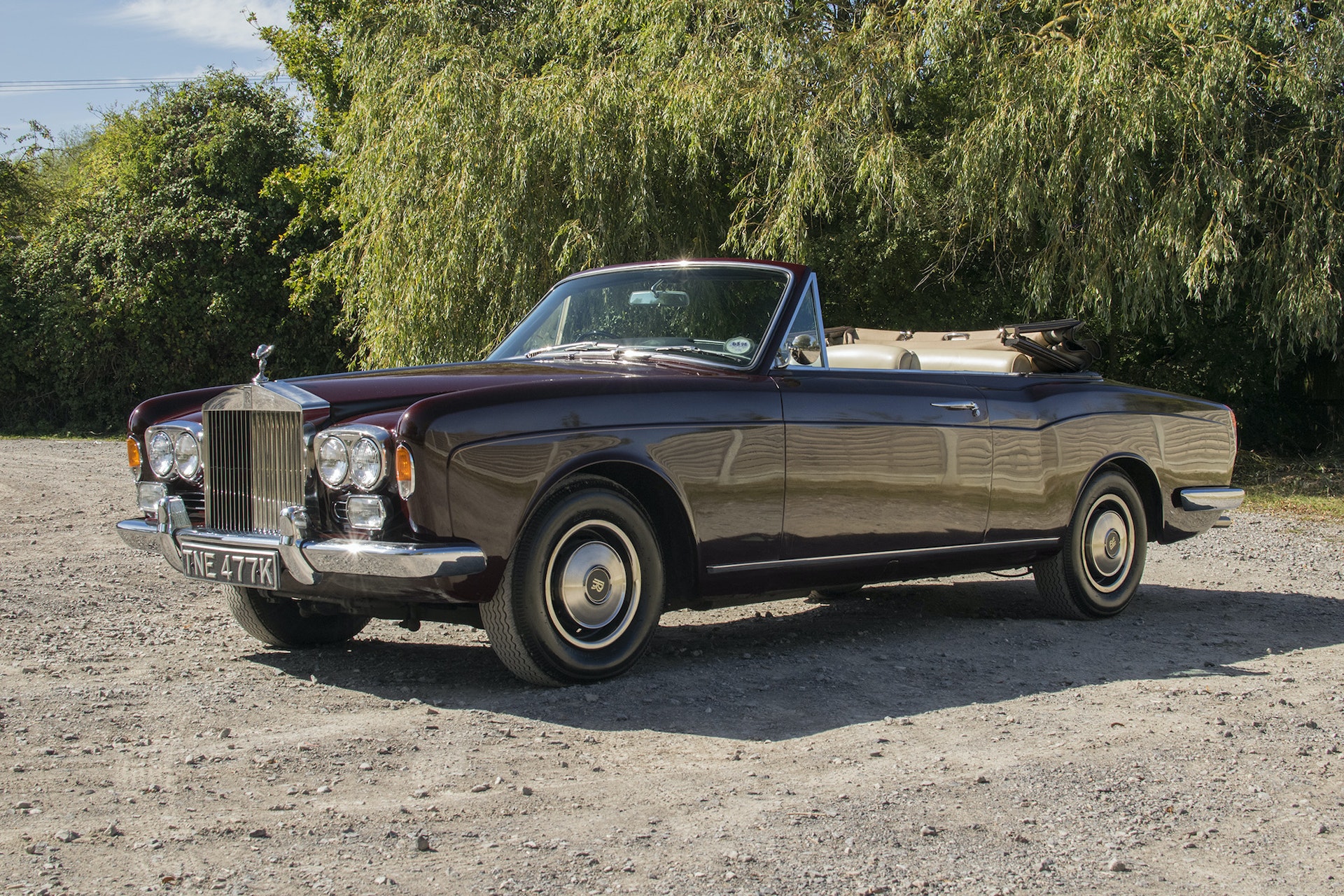 This Rolls-Royce Corniche is a fabulous classic car, which was used and enjoyed by a well-known music star for 20 years, before being carefully laid up and undisturbed for the next two decades. It has a bona fide ‘garage find’ back story, but has quite rightly been fully recommissioned to drive once again, rather than left as a dust-covered unknown quantity for the next owner. Its strong mechanical condition means it is ready to enjoy immediately, while its charming patina could be proudly presented for many years before committing to a more extensive rejuvenation.