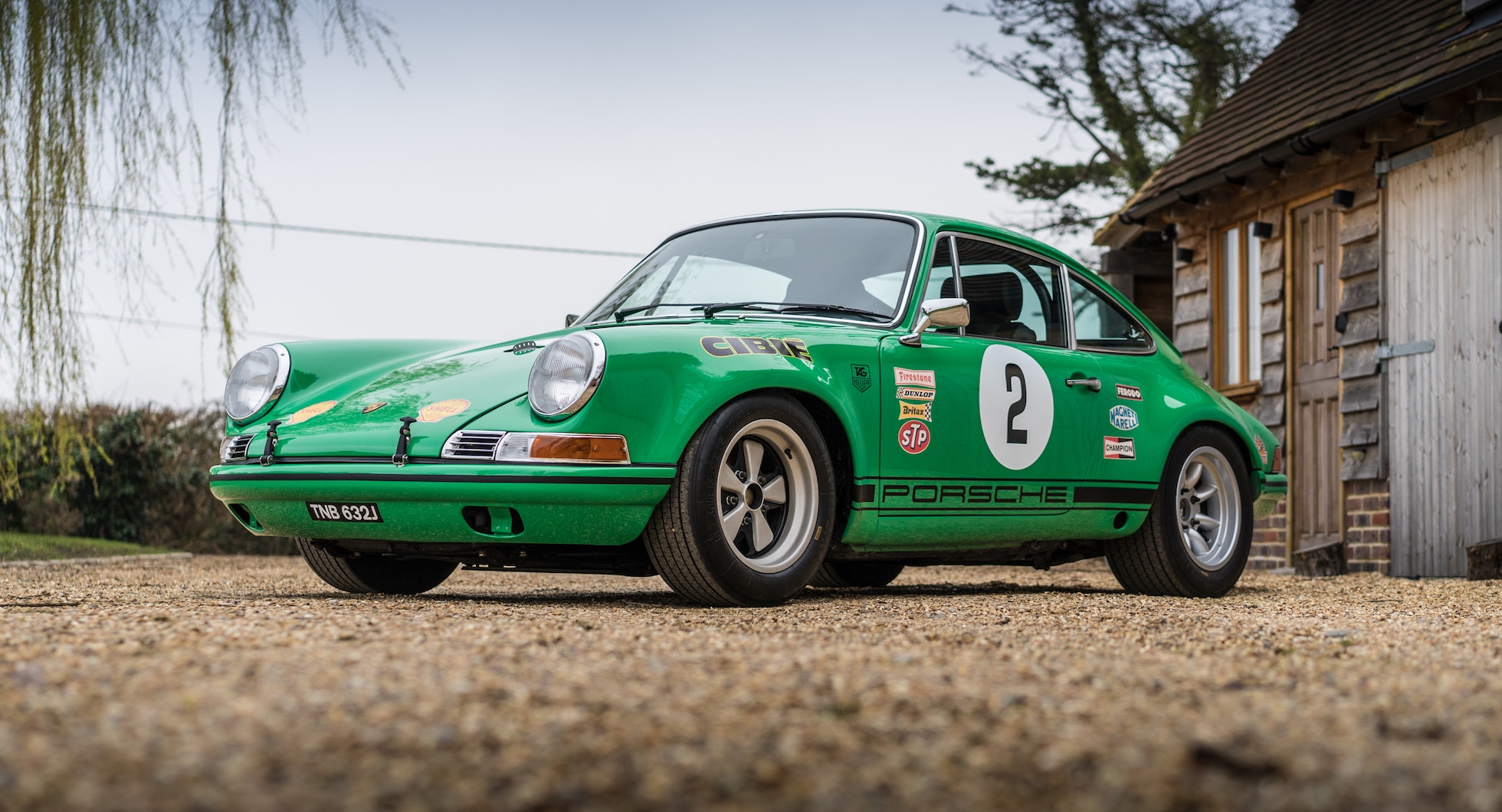 This 1971 Porsche 911 S/T Replica is a thrilling tribute to one of the most coveted road-legal racers from the marque’s back catalogue, presented in pristine fully restored condition. It is powered by a 2.8-litre twin-plug flat-six engine, producing a dyno-proven 265bhp, with rear-wheel drive through a five-speed 915 transmission. It has covered just 479 miles since the total nut-and-bolt rebuild to S/T specification. 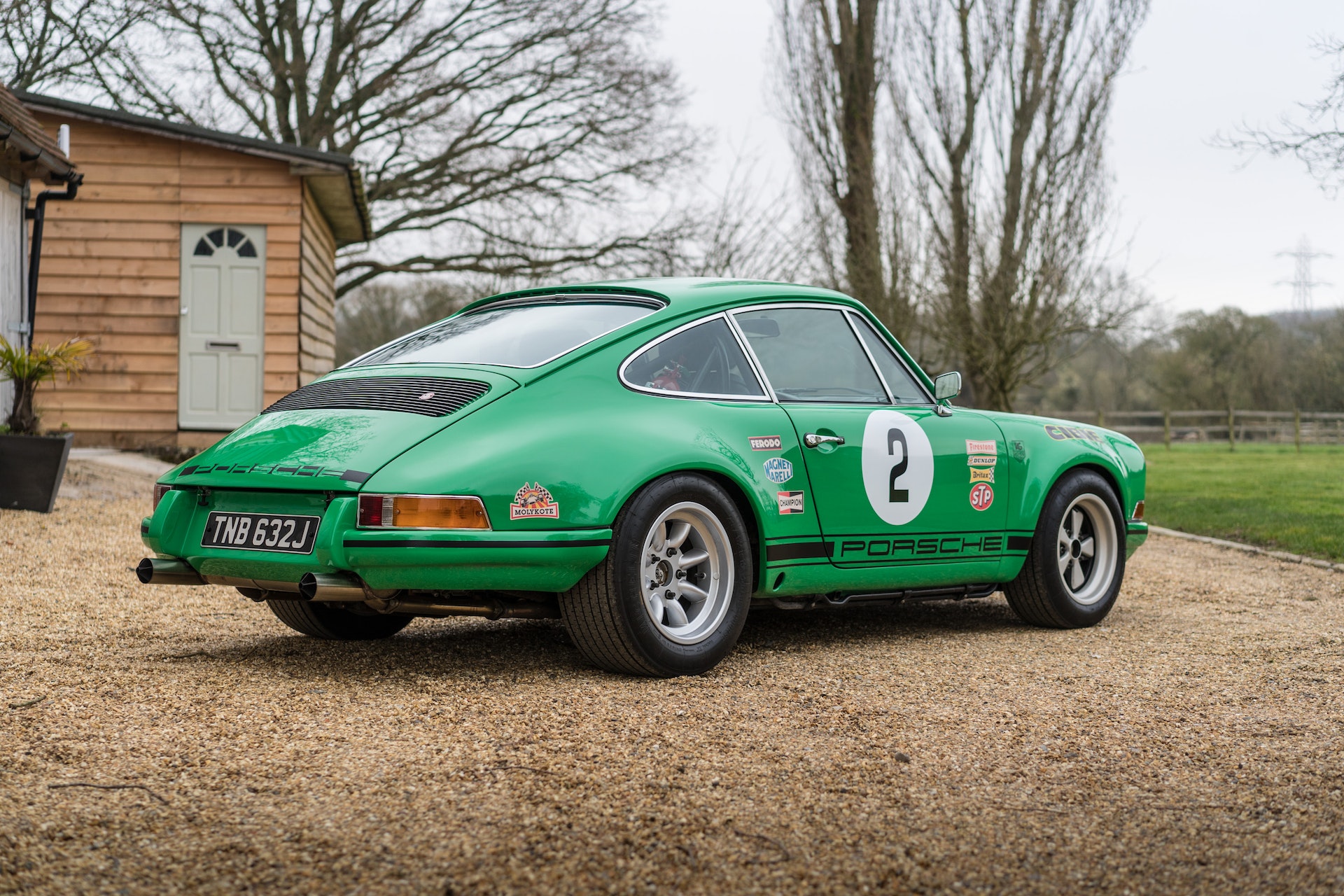 While the 2.7 Carrera RS is probably the first car to come to mind when enthusiasts think about classic racing 911s, the S/T of the early 1970s is worthy of equal celebration within the marque’s motorsport history. Following changes to FIA homologation rules, Porsche realised that lightweight versions of the 911 could be very competitive in sports car series. Stripped-out coupes with thinner-gauge sheet metal, reinforced suspension mounts, and powerful 2.5-litre motors, proved hugely successful in Group 3 and Group 4 championships. 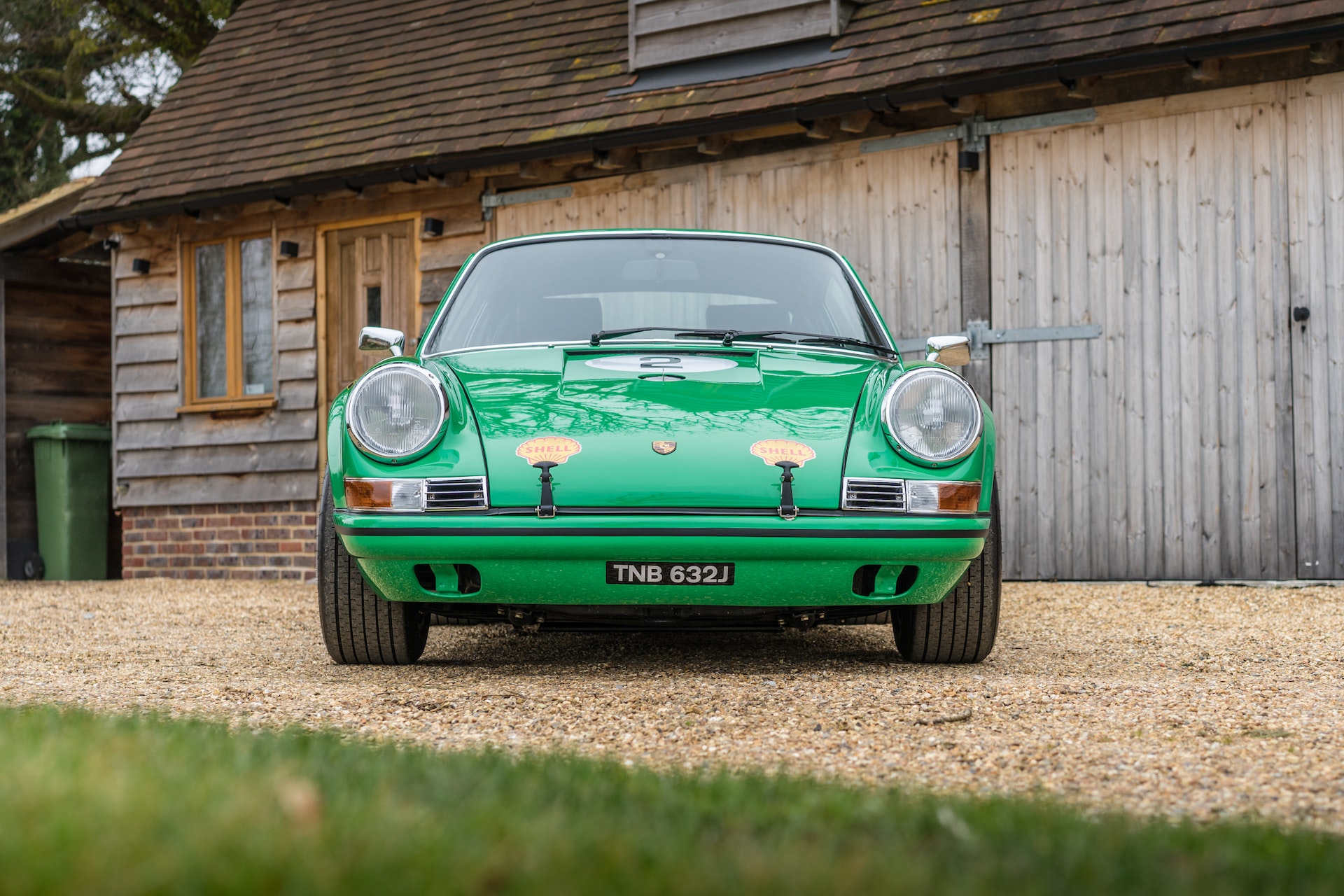 Around 25 genuine S/T 911s are understood to have been built, and if you manage to find one for sale, it would likely come with an asking price north of £700,000. With this context in mind, the merit in creating a detailed recreation becomes clear. In this case, what started life as a left-hand drive 1971 2.2 T coupe has been freshly transformed into a faithful S/T-specification 911, by classic Porsche specialist DSD Motorwerks, at a cost of around £150,000. 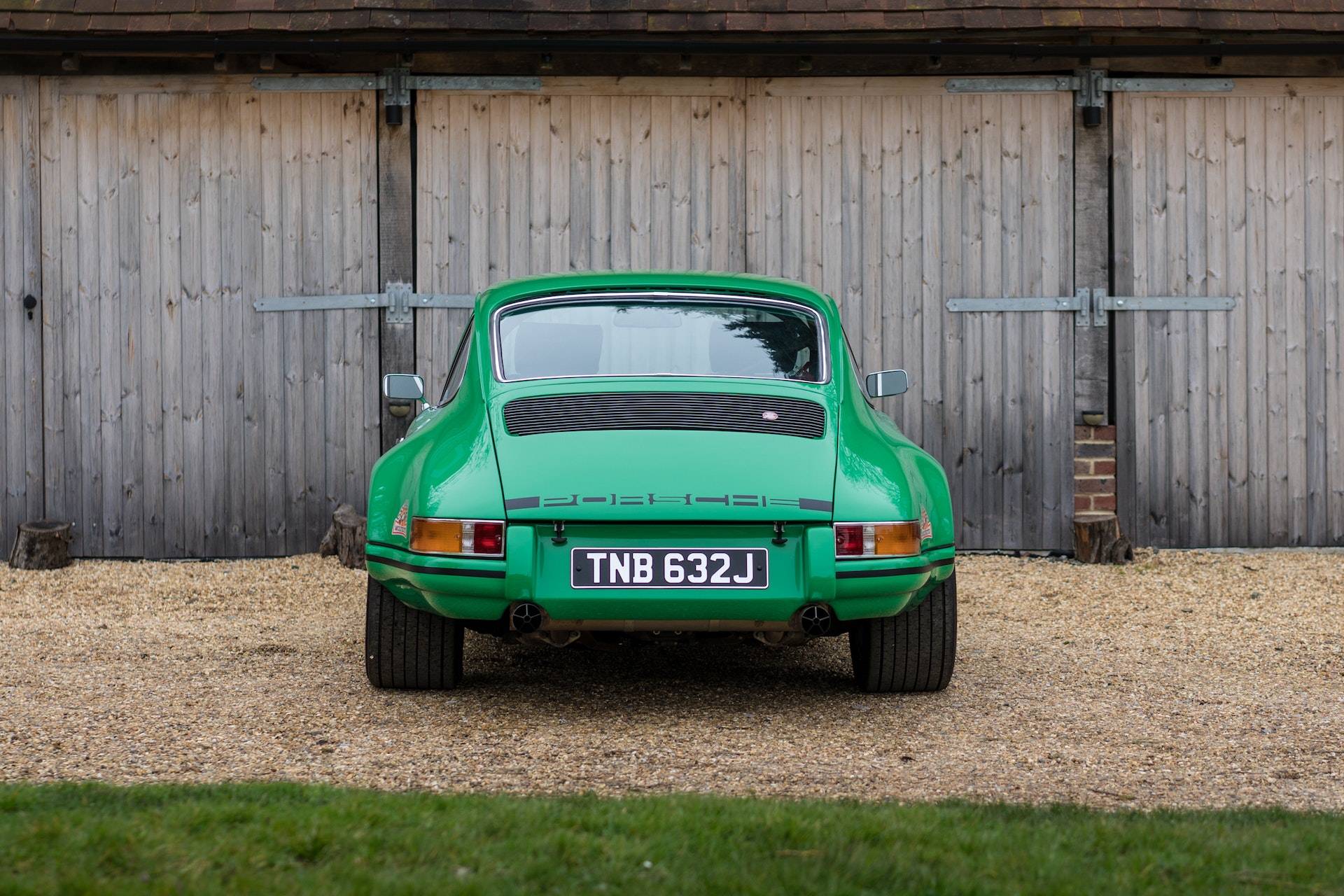 The shell of the original car was subject to a total bare-metal restoration with all-new panels, including lightweight front wings, hand-formed steel rear arches, a lightweight engine lid, and a lightweight bonnet with a centre-fill aperture for the 100-litre fuel tank. Like numerous genuine S/T cars, it is finished in vibrant Porsche Conda Green, and has been treated to a professional detailing session by Refined Detail in West Sussex. The retro racing logos are decals that can be removed without damaging the paintwork if desired. 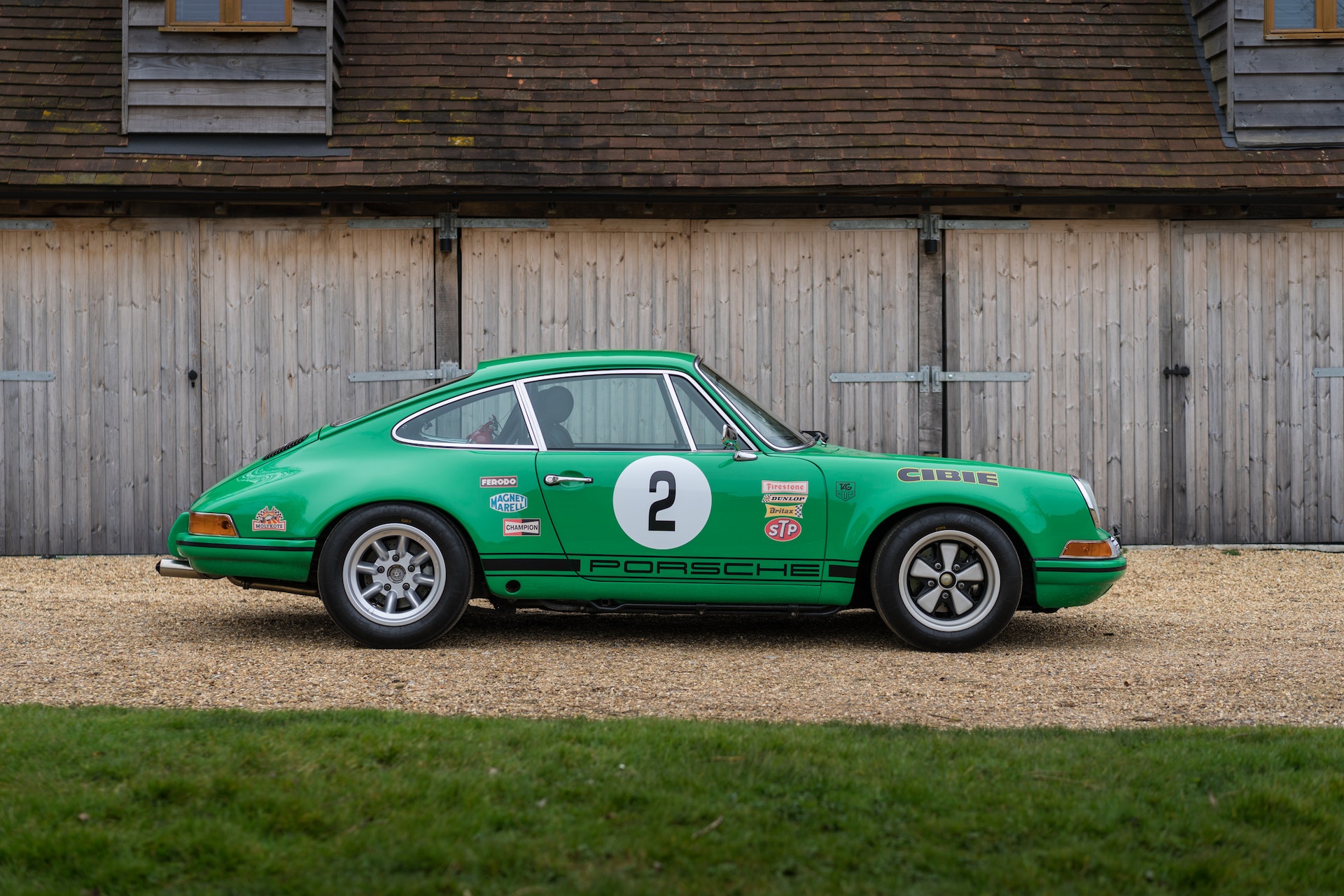 Its other lightweight body features include a mesh engine grille, and rubber fasteners to hold the bonnet and engine lid down. The kerb weight is understood to be just 960kg. All of the rubber window and body seals have been renewed, and the brightwork is in great shape. In period, the flared rear wheel arches of the S/T could house 9-inch section wheels - but there was not a Fuchs design big enough to fit properly. For that reason, Porsche employed 9-inch width Minilite wheels at the rear, with 8-inch width Fuchs rims at the front. This original non-matching style has been replicated perfectly on the car offered here. 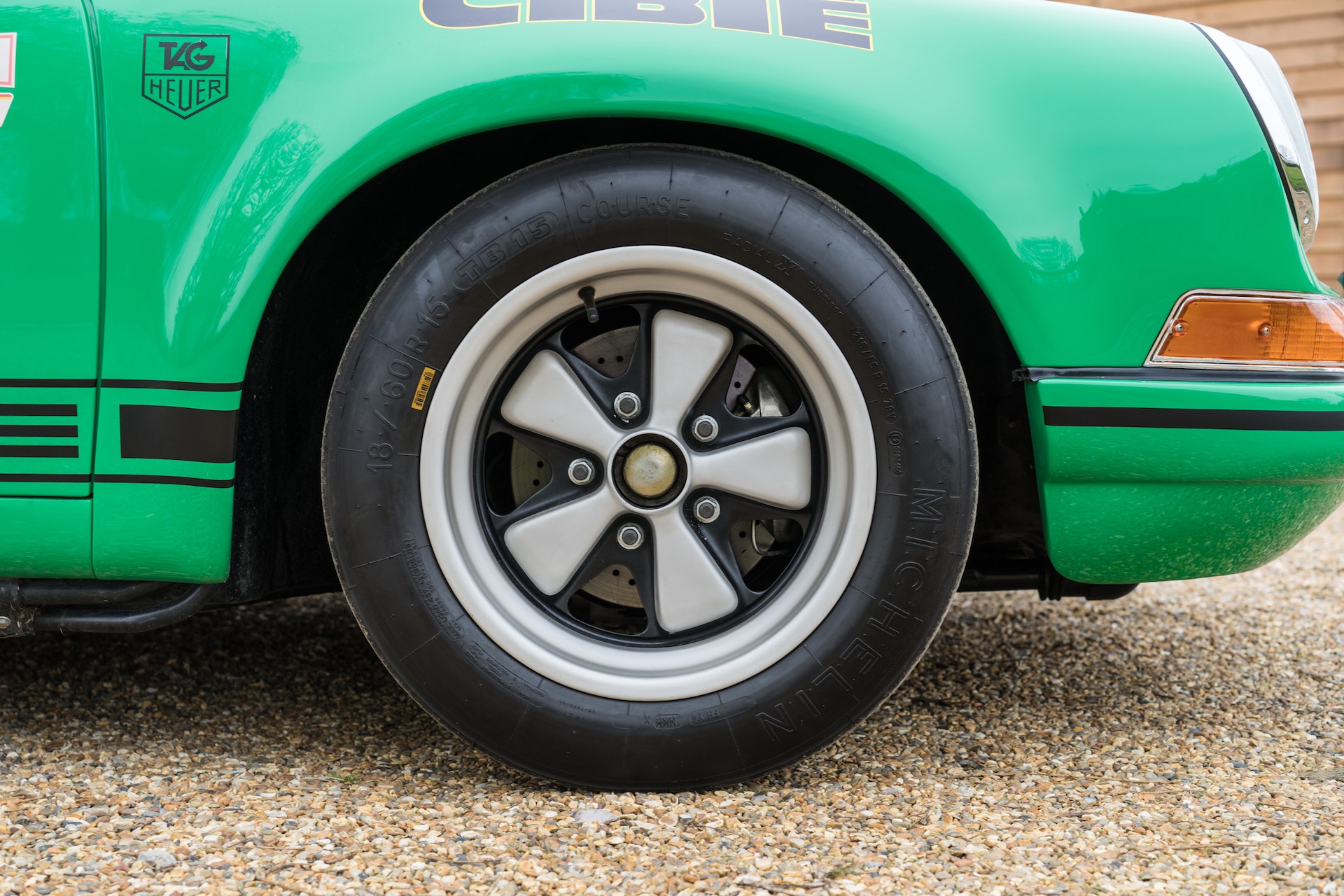 The interior of this 911 has also been pared back to recreate S/T specifications. There are lightweight door cards with pull-to-release straps and plastic grab handles, a lightweight carpet set, and the glove box, stereo and sun visors have been removed. Cobra Classic RSR retro bucket seats are fitted, trimmed in black vinyl with corduroy centre panels, and with cut-out slots for the four-point FIA-approved Sabelt racing harness. The glass around the cabin is also understood to be thinner than on the original 911 T. 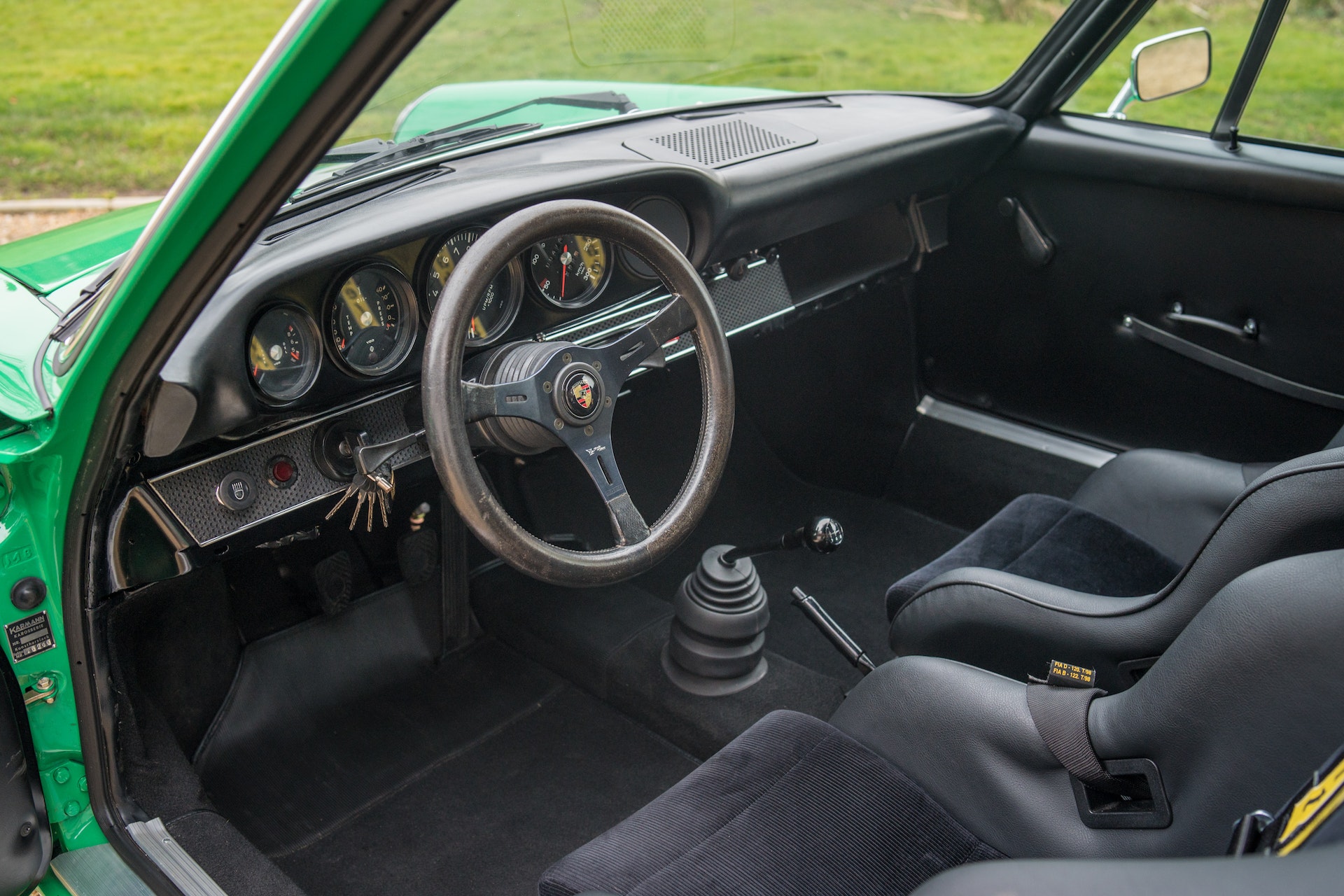 Ahead of the driver is a period-correct three-spoke Momo steering wheel, which has an elegant patina, and four VDO instrument gauges. Its rev counter and speedometer have been rotated anti-clockwise by nearly 90 degrees to give the driver a more useful view of the needles when at racing pace. The FIA-approved rear roll cage has a fire extinguisher mounted on the frame, and a plumb-in fire system also comes with the car. 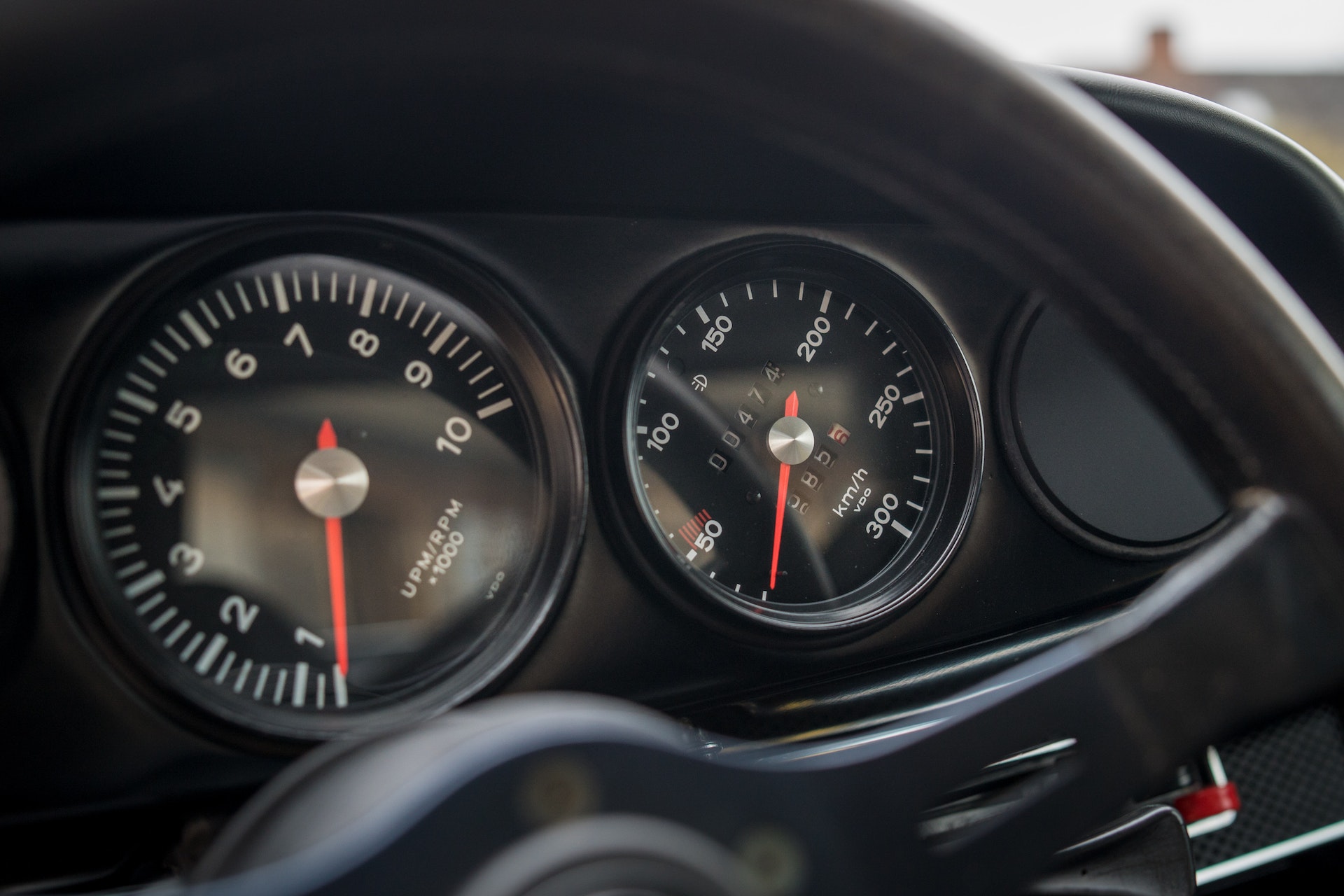 At the heart of this bespoke build is the 2.8-litre twin-plug Porsche racing engine, featuring a shuffle-pinned magnesium crankcase, with the square edges of the webbing rounded off or ‘boat-tailed’ to improve air flow. There are lightweight JE forged pistons, 911 S specification nitrided con rods with high-performance ARP bolts, and Porsche GE60 competition camshafts. It is also equipped with a lightweight flywheel. 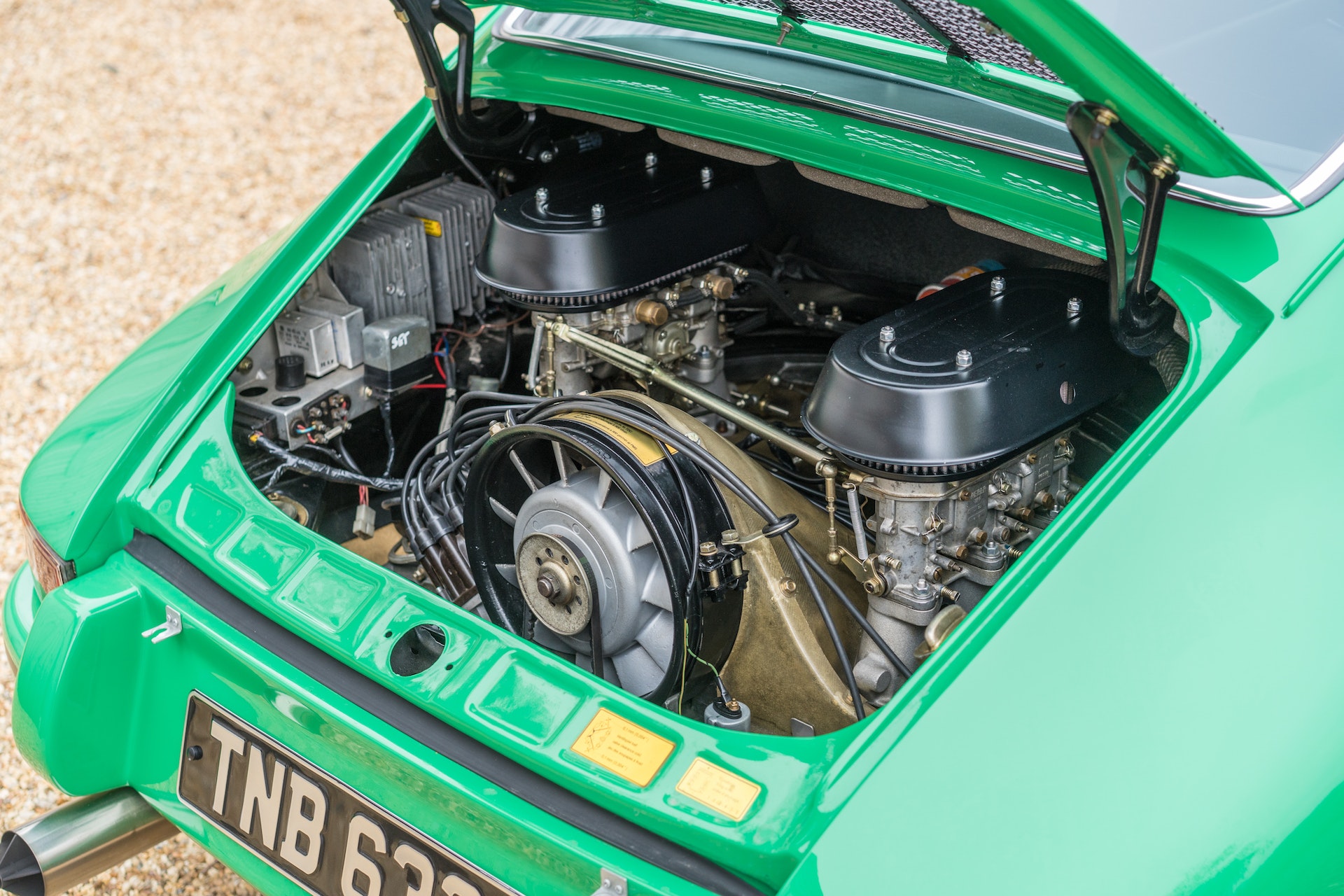 The engine was built with new valves as per a period 911 RS, along with new guides and three-angle valve seats, and titanium valve retainers. The intake and exhaust ports are both of 41mm diameter. Its cylinder heads have been gas flowed, and the engine is fed by tuned Weber carburettors. A Porsche 964 oil pump is fitted, along with Turbo-specification return oil restrictors to keep extra pressure on the bottom end. 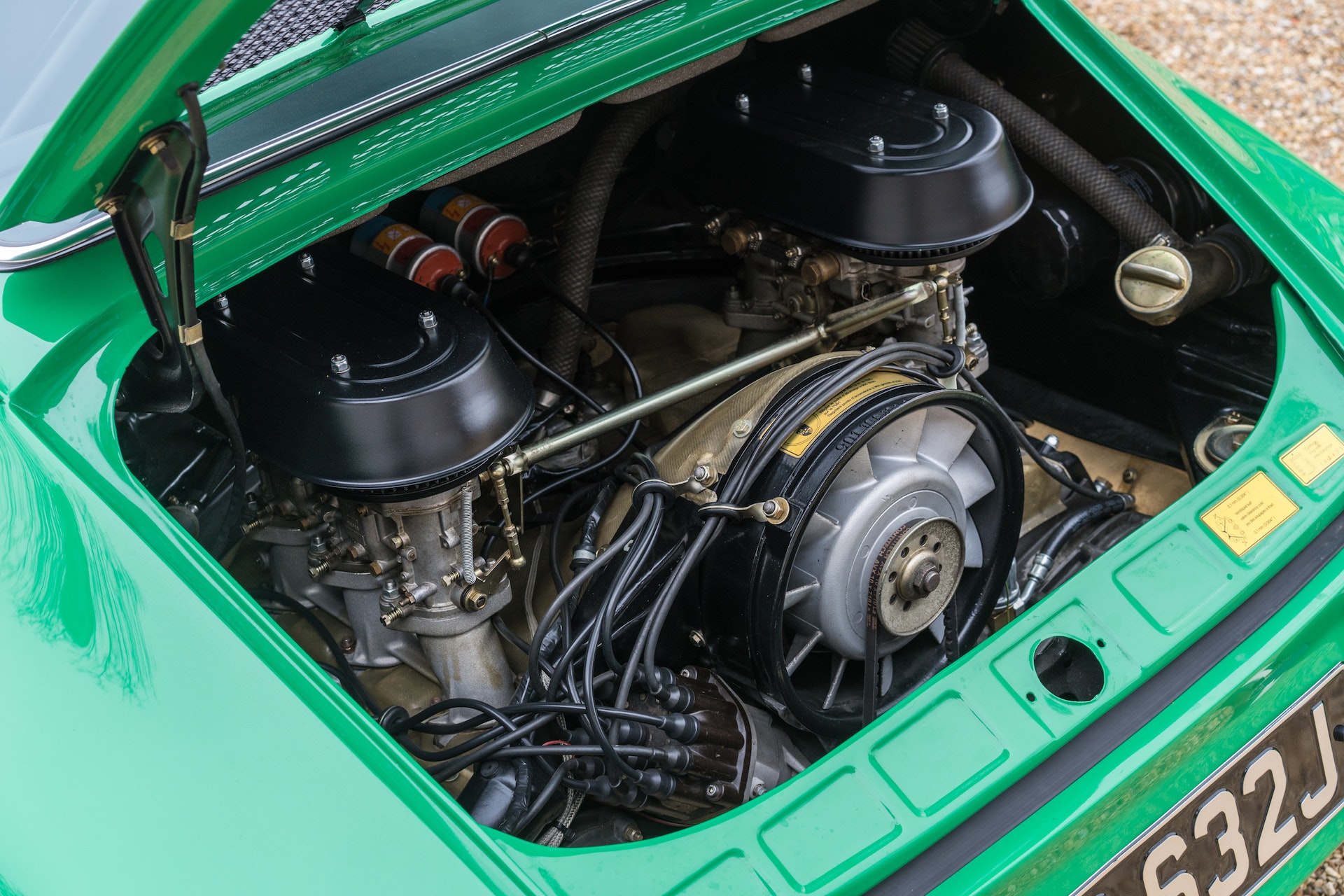 There are race-specification exhaust manifolds, which feed into a custom-made stainless steel exhaust system built to original S/T specifications. The engine output has been measured on a dynamometer at 265bhp, with print-outs to prove, and the motor is driven through a 915 five-speed gearbox, which has been fully rebuilt. 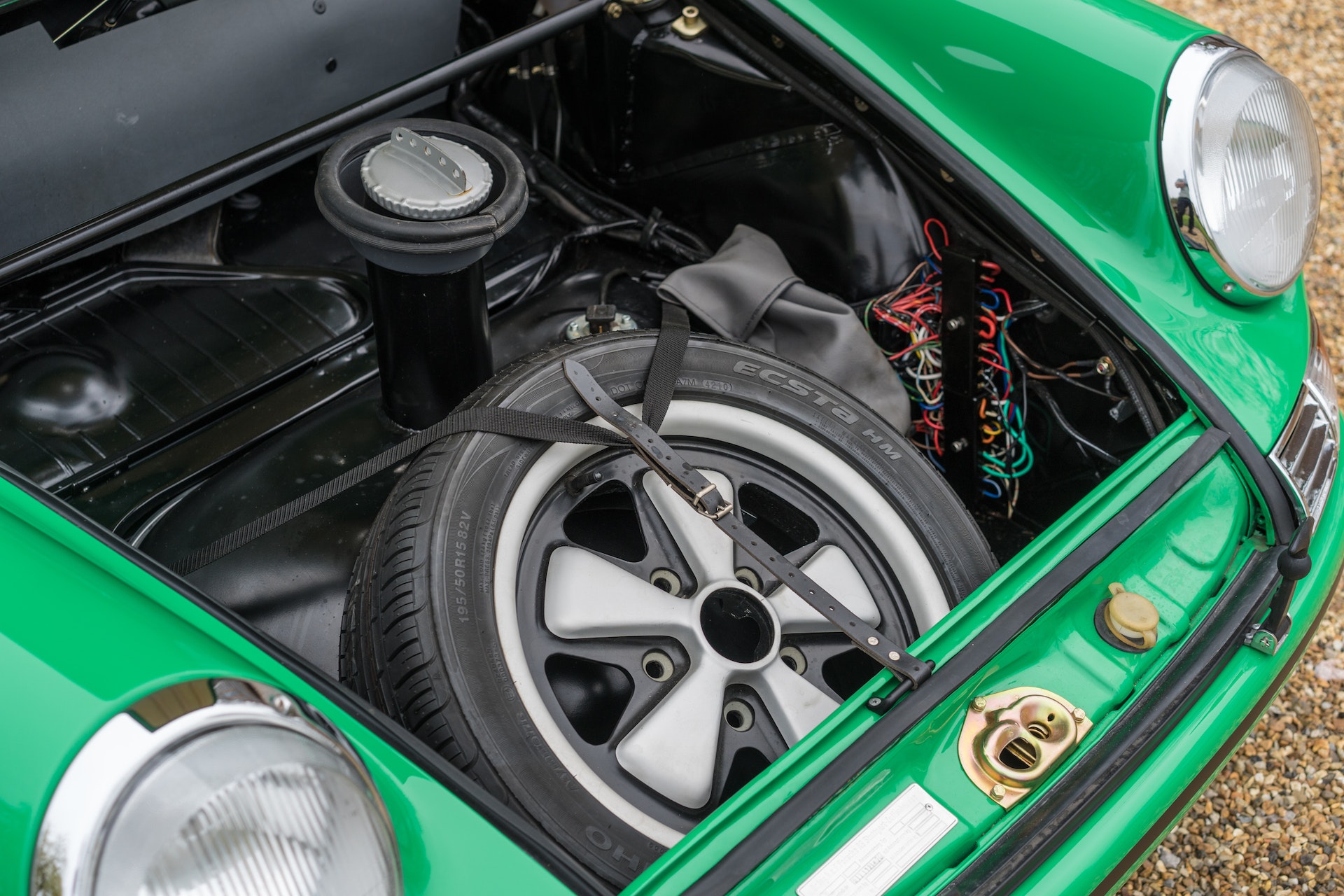 Its suspension has been totally renewed, using stiffer, later lightweight alloy arms with Bilstein shock absorbers, with a set-up that has been calibrated for fast road or track driving. The brakes consist of lightened hubs and cross-drilled discs, with alloy 911 S specification calipers. The battery has been relocated to the ‘smugglers hatch’ in the boot for better weight distribution, and the wiring loom and lights are all new. 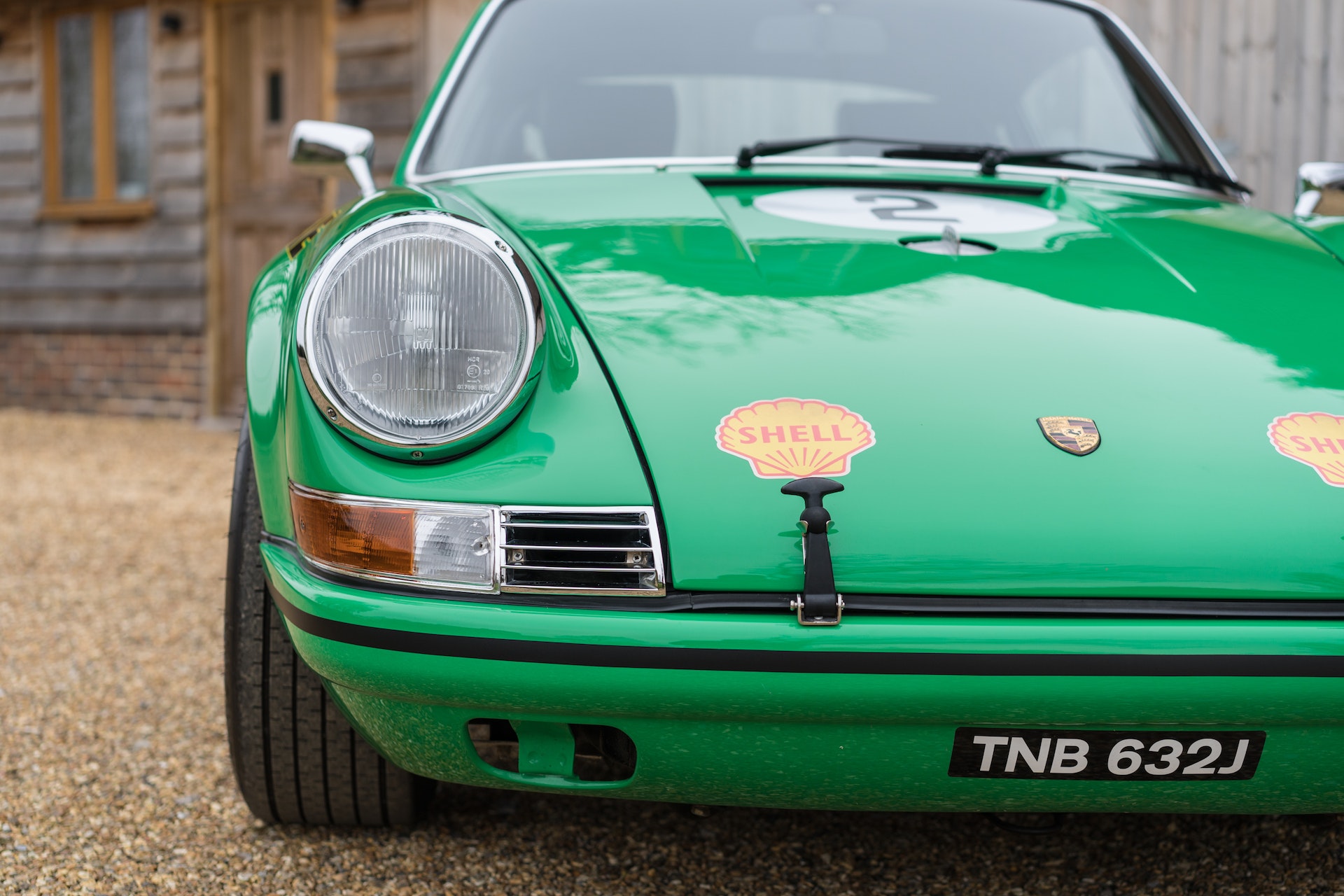 The alloy wheels are fitted with a set of period-correct Michelin TB15 Course competition tyres, in size 215/55 R15 at the front and 270/45 R15 at the rear. They have covered only the 479 miles of running-in and testing, so remain in as-new condition. With a valid 1971 registration, this 911 is exempt from annual MOT testing and vehicle tax in the UK. 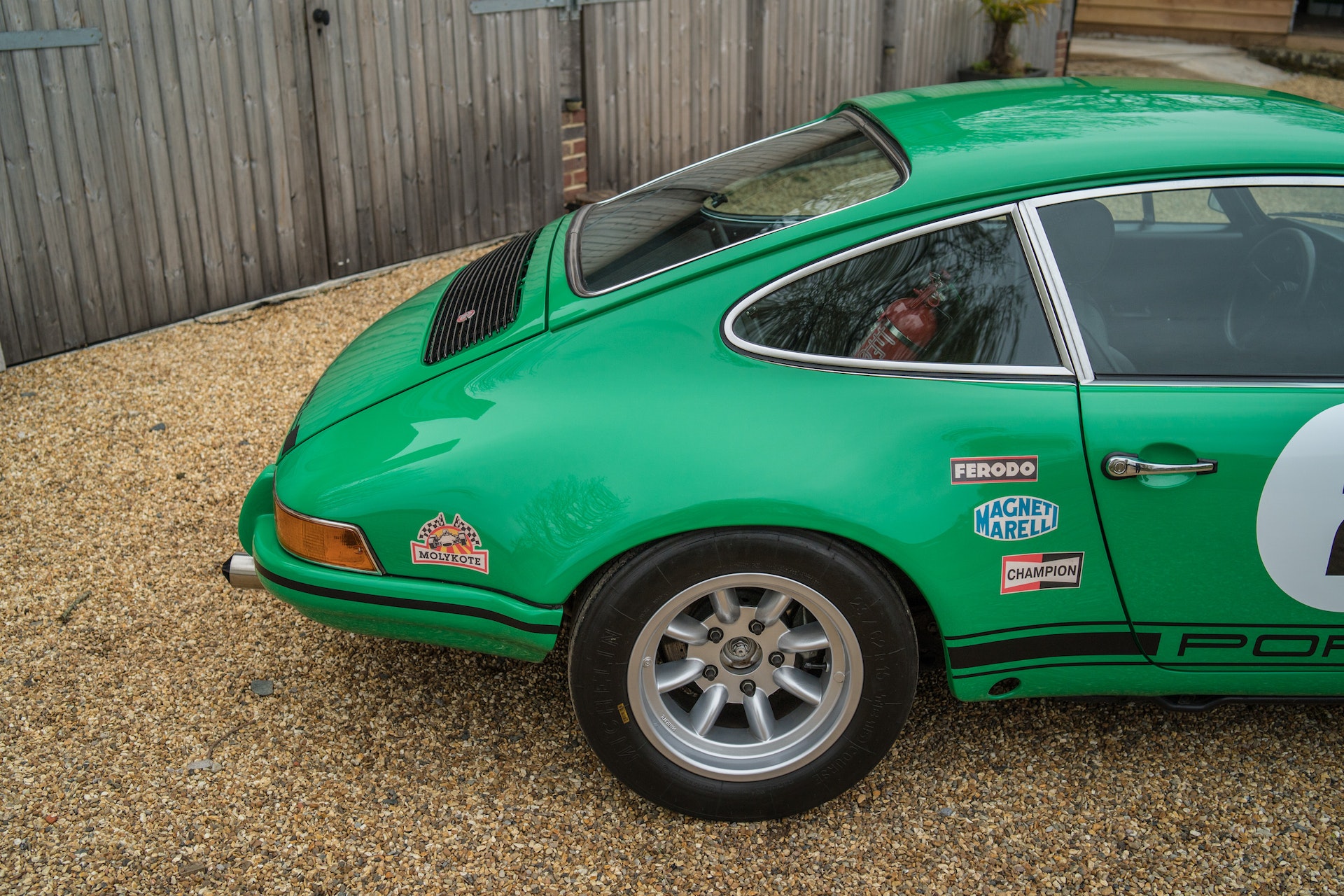 Accompanying this car is all of the restoration paperwork, plus a large number of photos that document the build, including the bodywork restoration, and the engine and gearbox rebuilds. 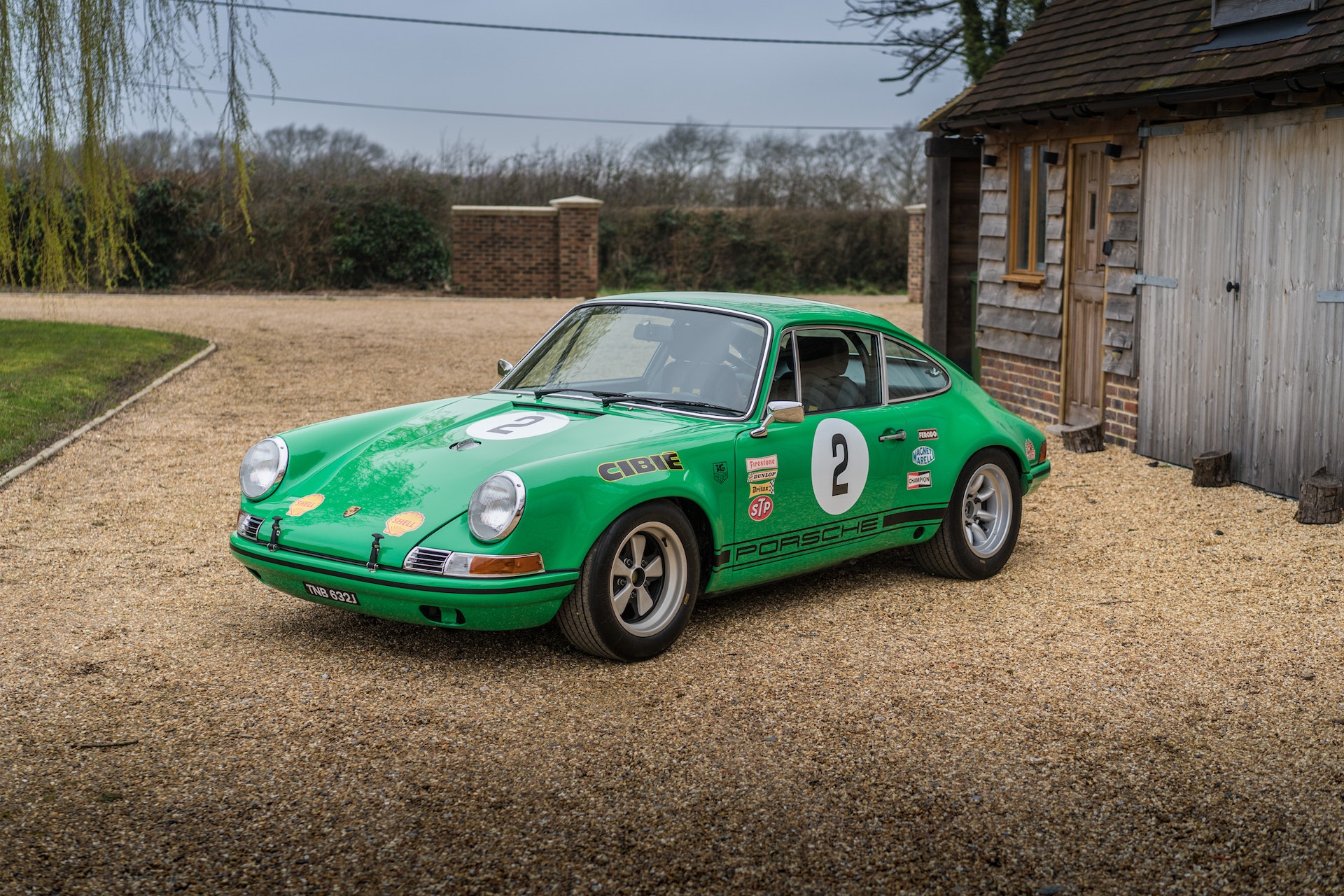 This Porsche 911 2.8 S/T Replica is a wonderful bespoke build, which is remarkably faithful to the original model, and which remains in outstanding condition. To create a 911 to the same specification would cost significantly more than the reserve price for this car, so it will undoubtedly prove to be superb value for the next owner. The car will feature in a forthcoming issue of Classic Porsche Magazine, and while it is a great candidate for historic racing series, it is ready to enjoy immediately as an exhilarating lightweight road car.