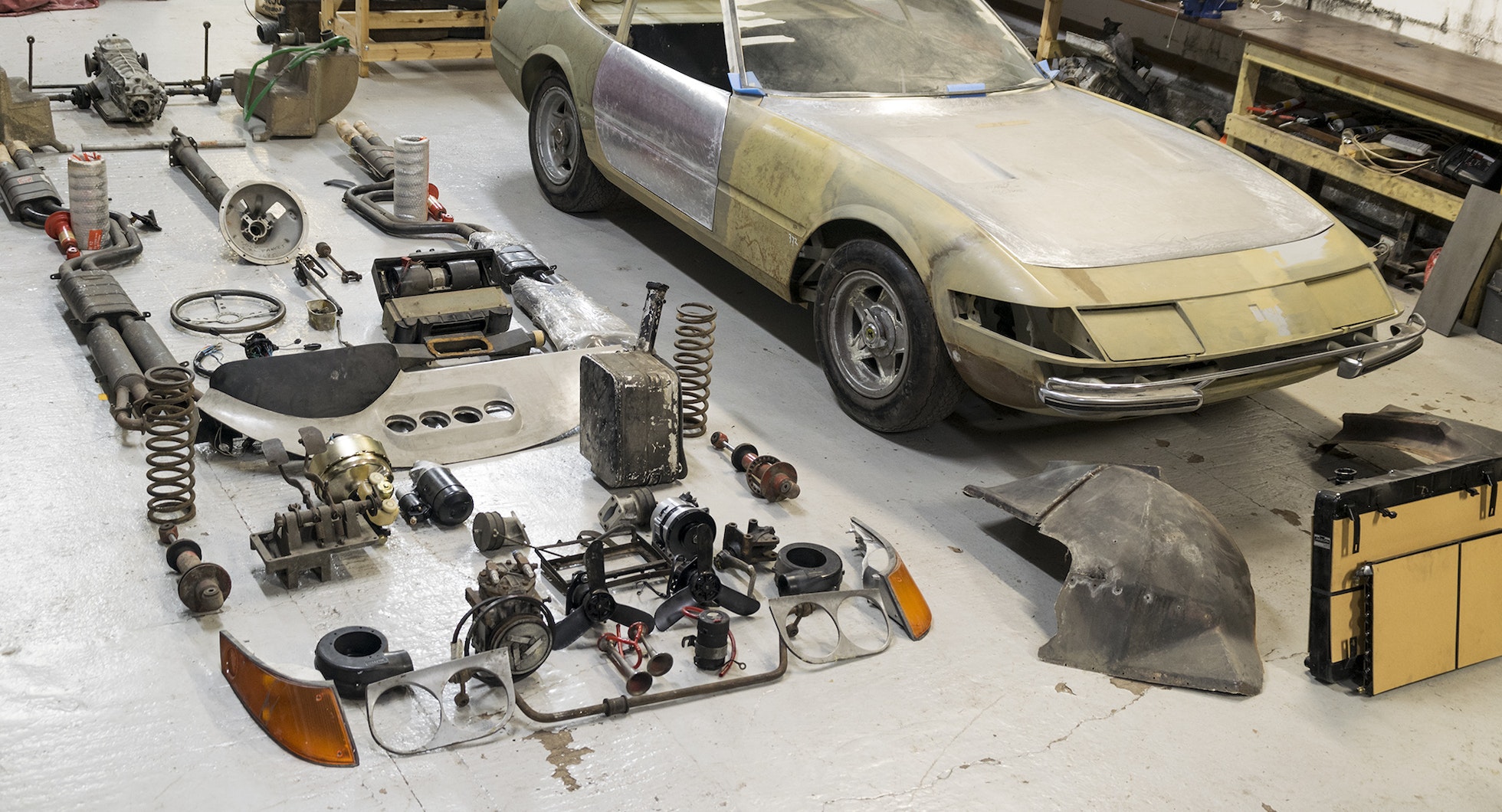 This 1971 Ferrari 365 GTB/4 ‘Daytona’ Berlinetta has not been on the road since 1974, and represents a unique opportunity to acquire and complete a fascinating project. Chassis number 14273 is a right-hand drive, UK market example with pop-up headlights. It was originally finished in Argento Auteuil paintwork with black Connolly leather, charcoal grey carpets and air conditioning. 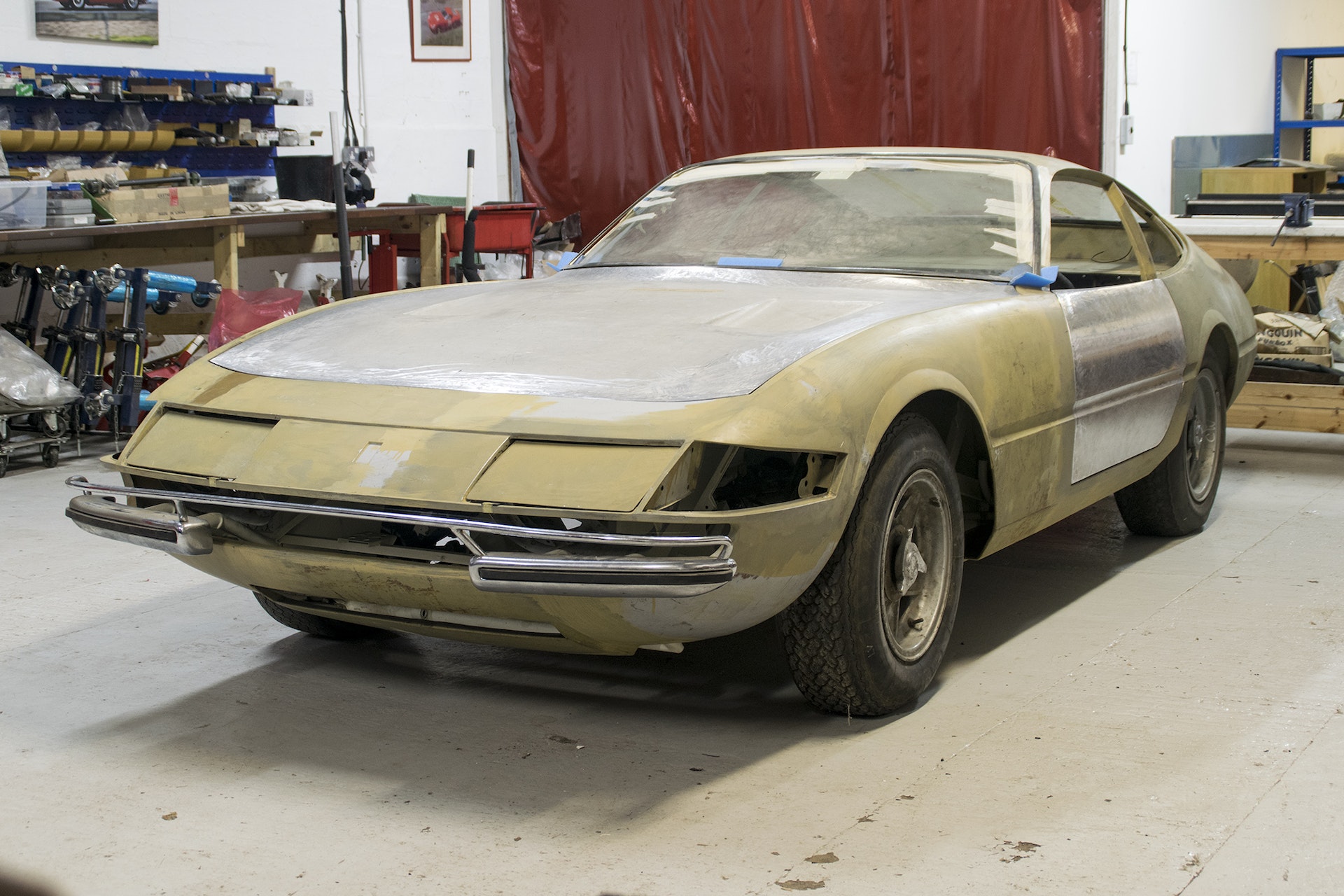 Its first owner was John Cussins, a prolific hillclimb competitor and performance car enthusiast. At one time or another, his collection has included the last factory-built Ford GT40 road car, one of the four Brabham BT35X sprint cars, the one-off Chevron B32 hillclimb special, and the experimental four-wheel drive BRM P67 Formula One car. Correspondence on file confirms that the car was collected by Cussins from the Ferrari factory in May 1971, and then driven spiritedly along the Italian Riviera in time for the Monaco Grand Prix. 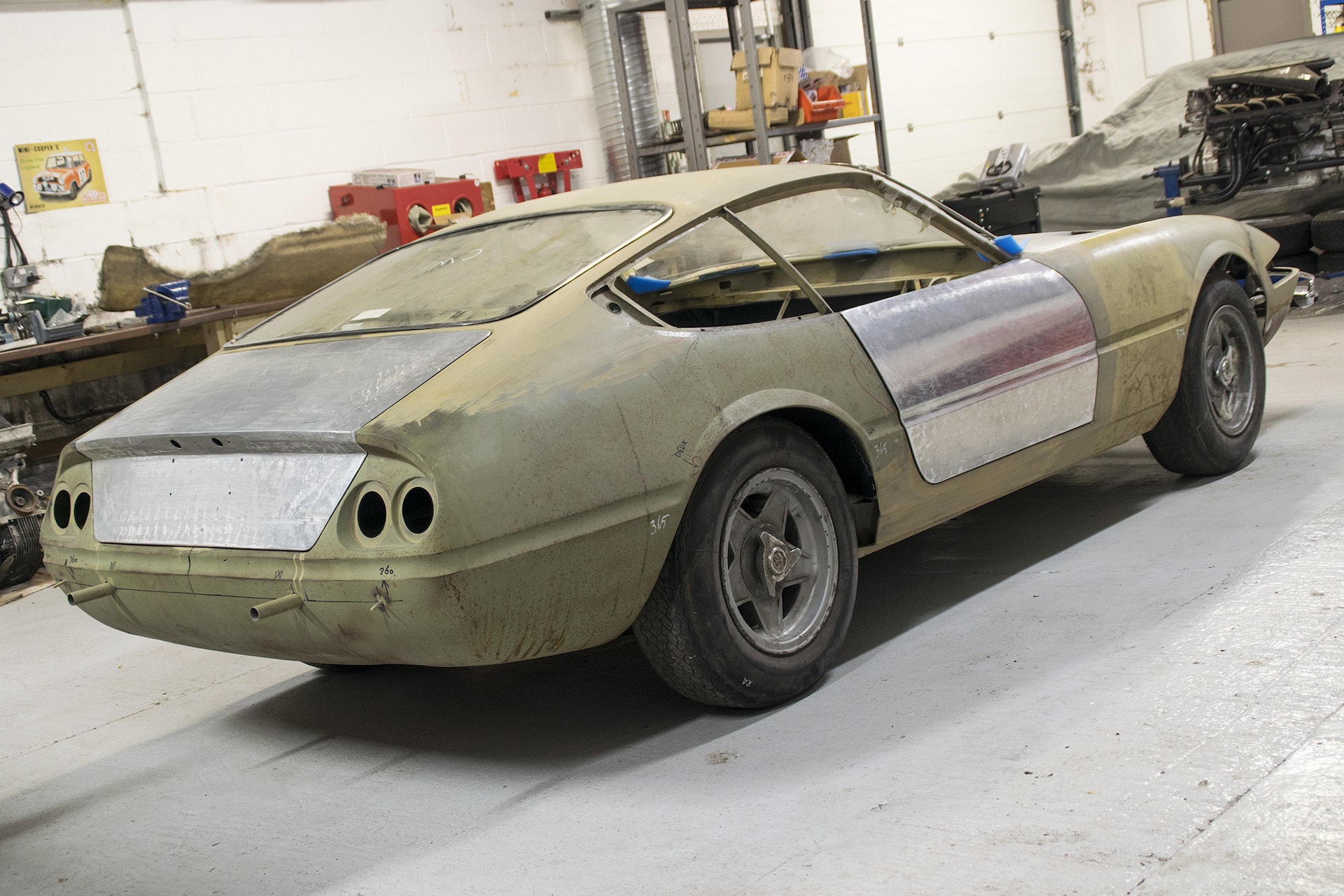 There are records of two running-in services on the Daytona carried out in June and July 1971 at Maranello Concessionaires in Egham, and a 6,000-mile service in August 1971 when the odometer recorded 5,809 miles from new. Its first change of keeper occurred one year later, and the next in June 1974. 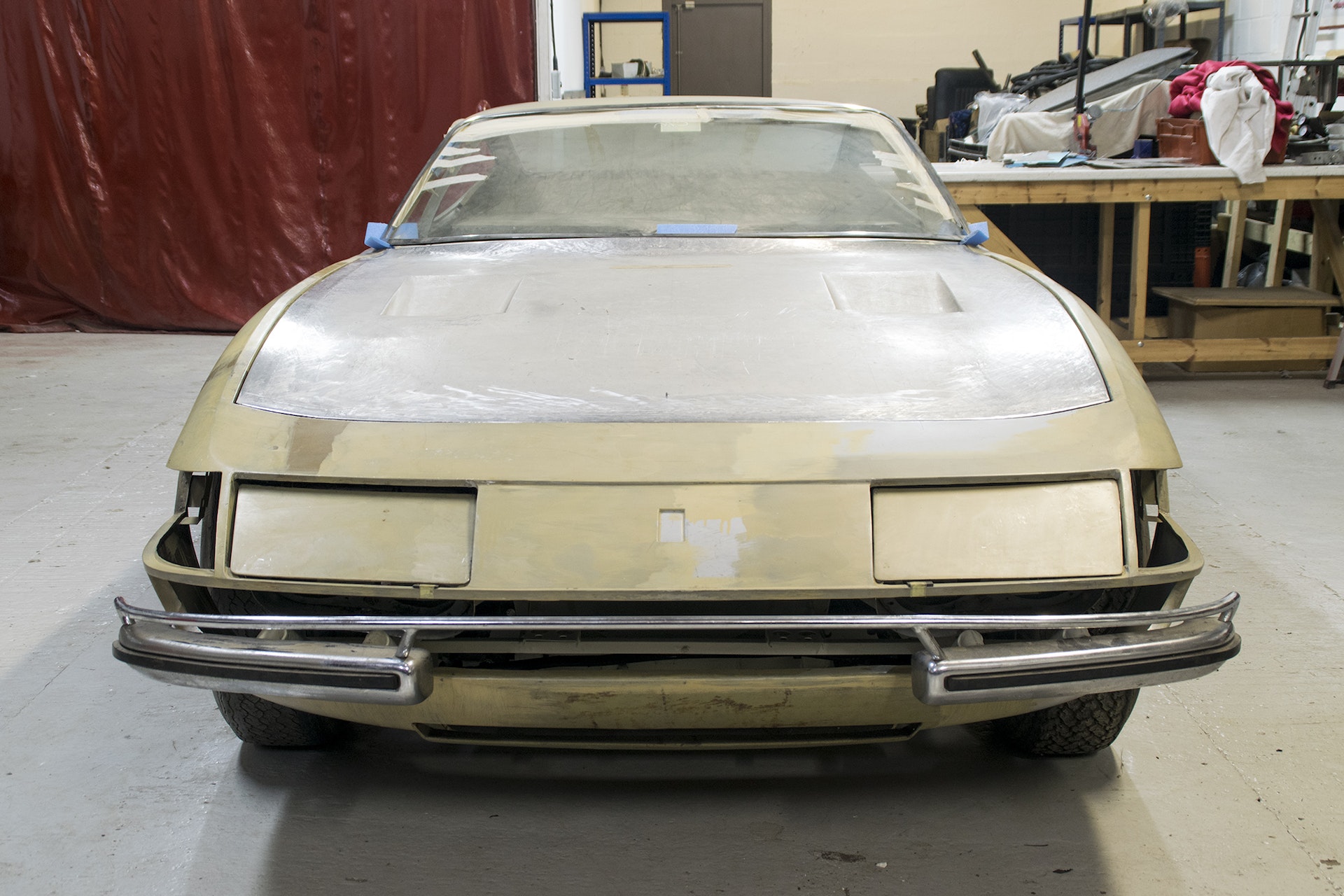 No records exist of exactly what happened, but the car was then involved in an accident that led to it running off the road and down a slope. It was subsequently extracted by wrapping chains around the body, which ultimately caused as much injury to the panels as the crash itself. In September 1974, the heavily damaged car was part-exchanged against another Ferrari 365 GTB/4 Daytona in exactly the same specification. 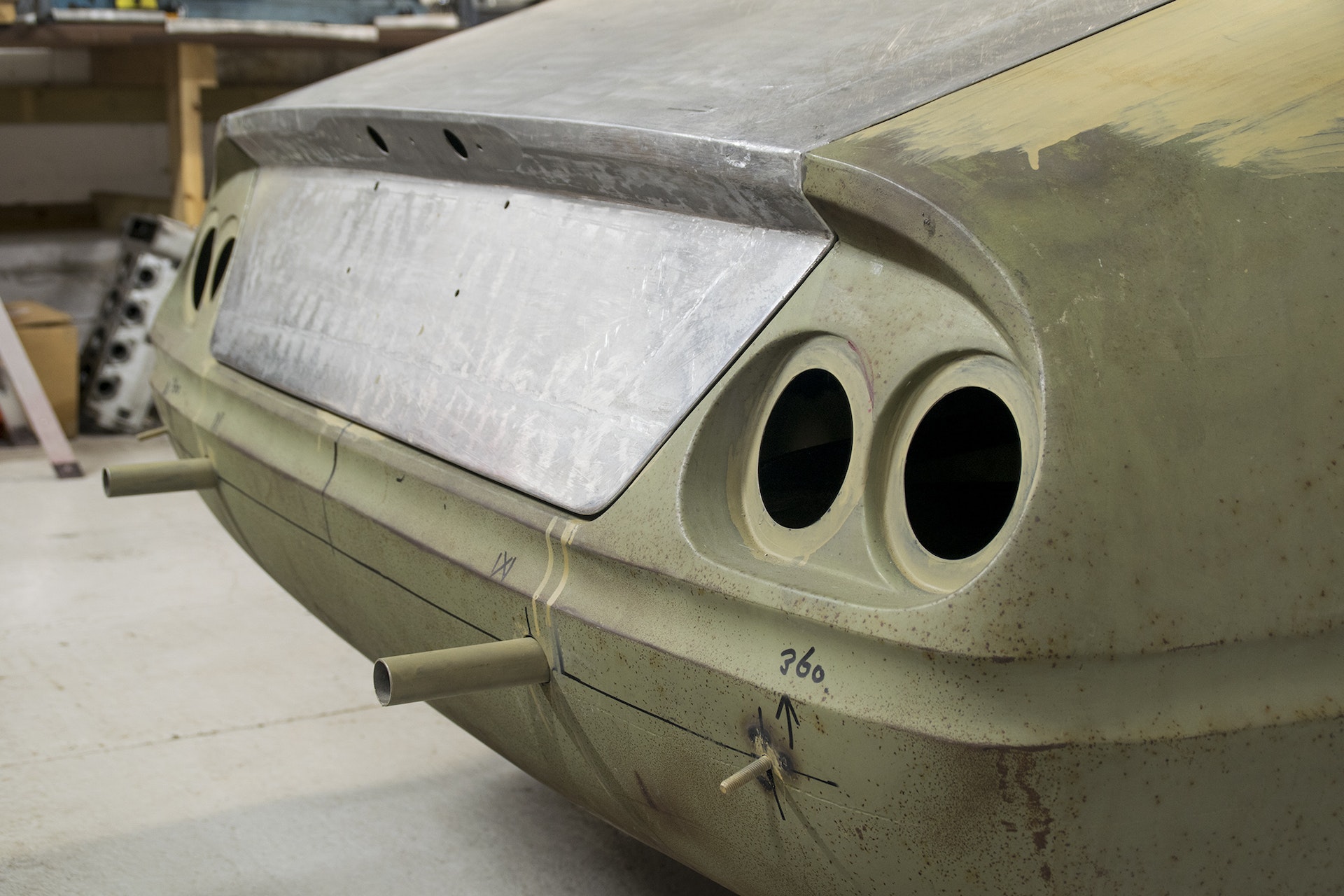 Chassis 14273 was subsequently sold to someone who wanted to bring the car back to life as a 365 GTS/4 Daytona Spider recreation, and the roof was therefore cut off and discarded. Probably realising that they had bitten off more than they could chew, the car was sold again soon after this to the late Chris Lawrence of Wymondham Engineering, who intended to complete the restoration. 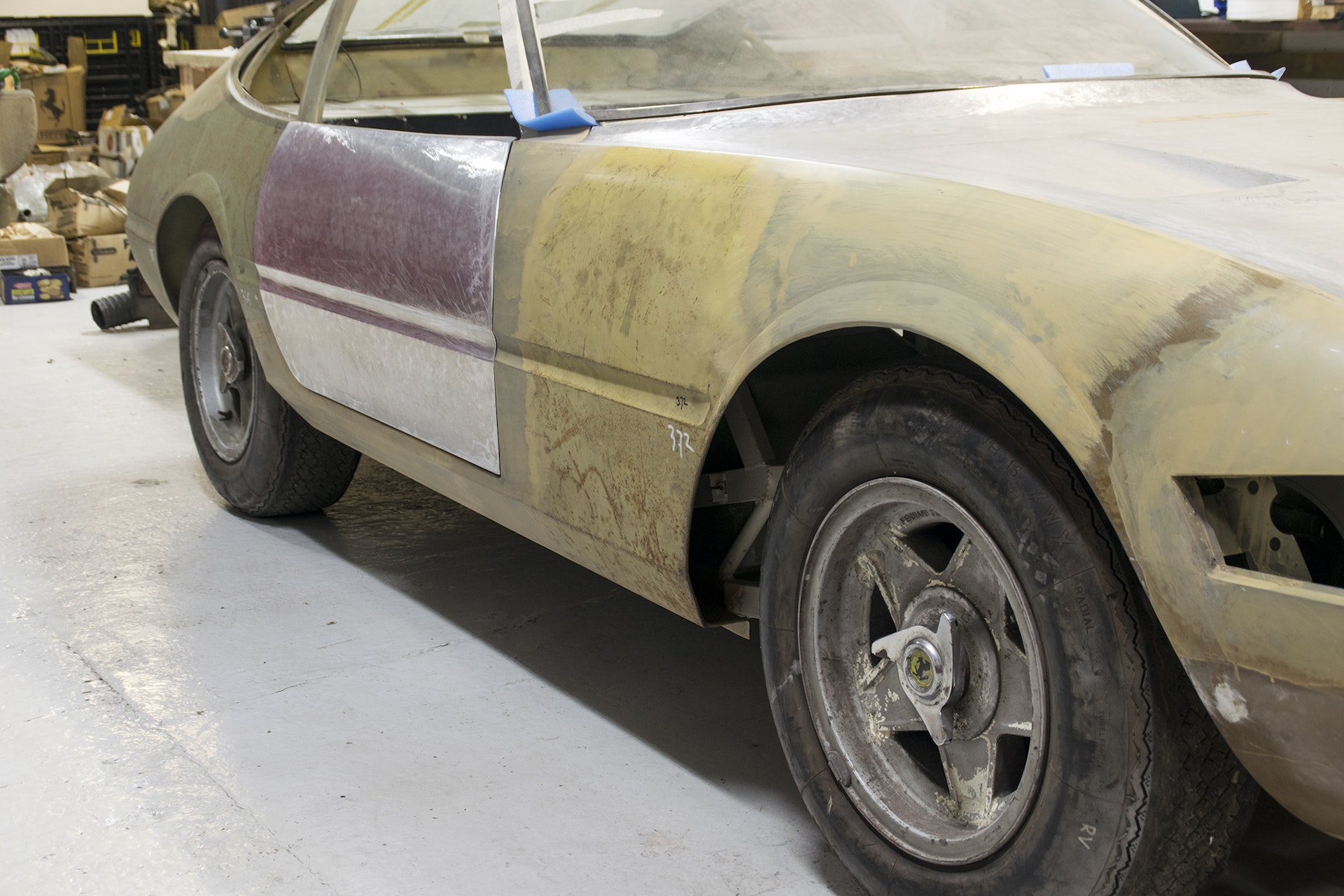 As is often the case, other projects took priority and the damaged car was safely stored for nearly 30 years without being progressed. The current owner, who was a friend of Chris Lawrence, acquired the project car in 2006, having known about its existence for some years. 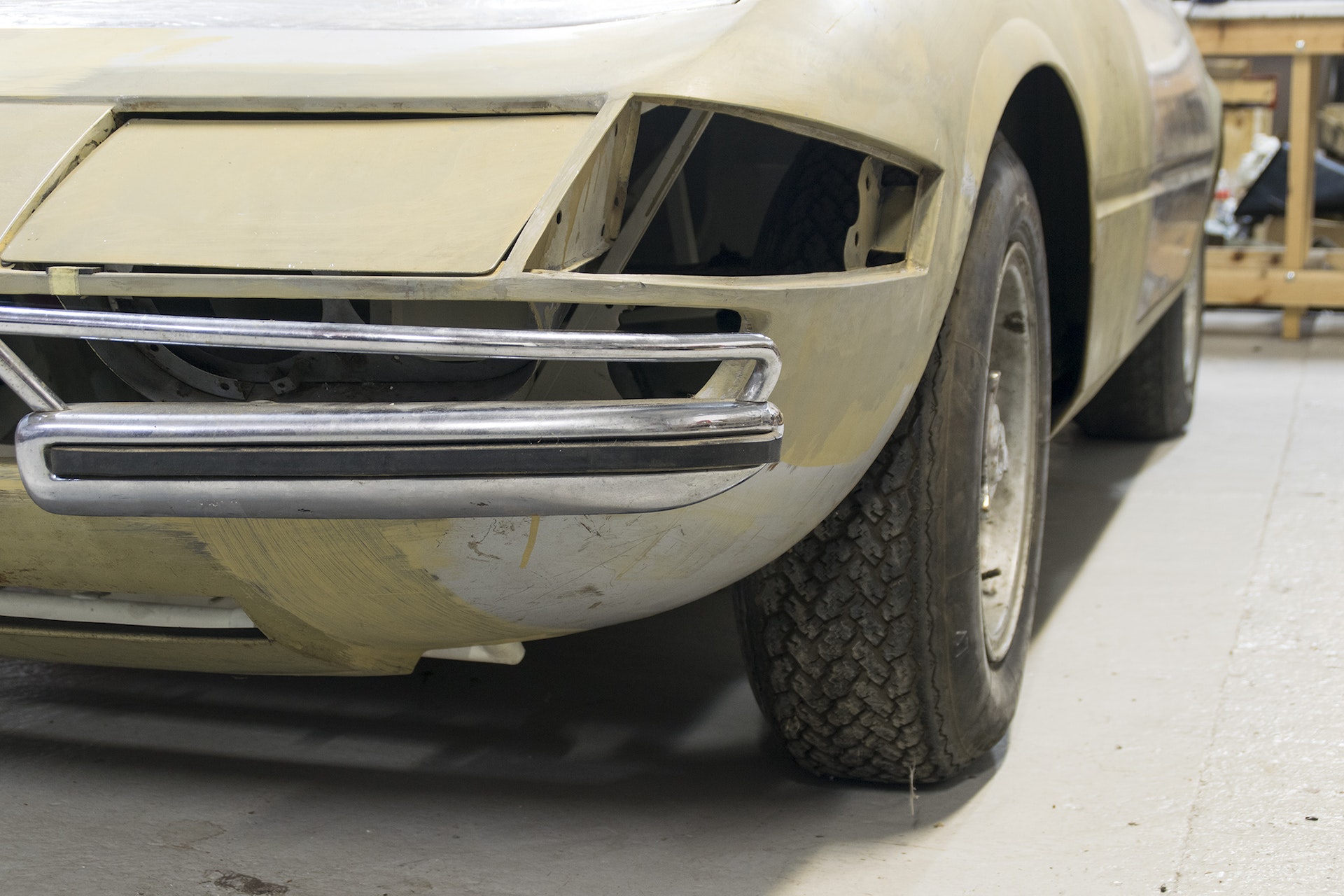 Over the last 13 years, this Daytona has gone through an incredible transformation. Given the damage to both the body panels and the chassis, a ground-up rebuild was undertaken, which included extensive specialist repairs to the frames, as well as completely renewed body panels. A genuine Scaglietti front section had been sourced by the last owner, and the new rear section and roof were purchased directly from Maranello Concessionaires. Other new old stock items were also acquired, including new window glass. 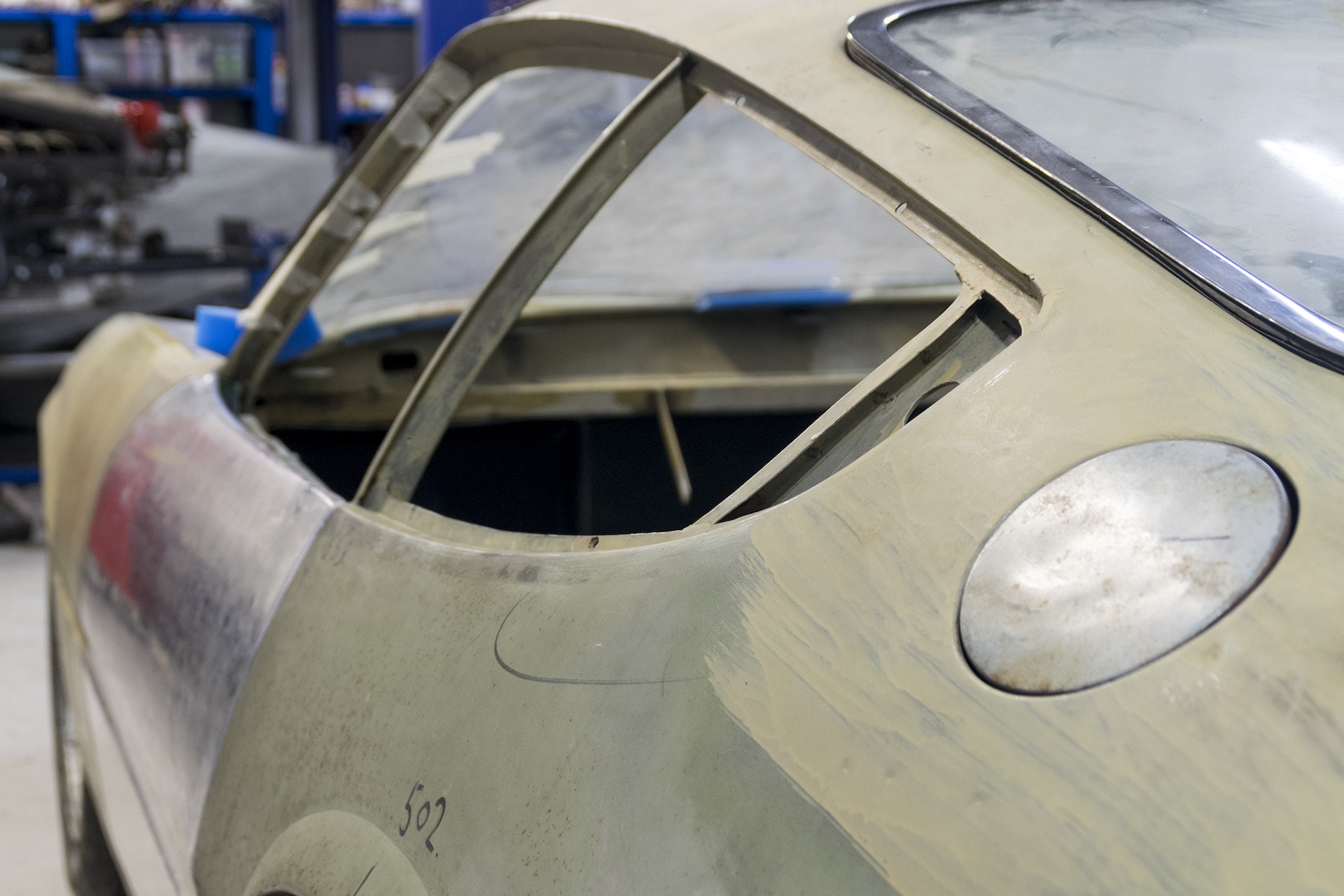 The car is now back to its original Berlinetta configuration, with superb metalwork by renowned Ferrari coachbuilder Alwin Hietbrink. Frequently entrusted with repairs and restorations of highly prized models such as the 250 GTO, 250 Testa Rossa and 250 GT SWB Berlinetta, Hietbrink has also worked on famous Ferraris such as the 250 GT ‘Breadvan’ by Drogo. An earlier attempt at restoration needed to be dismantled and the car was completely rebuilt on a jig from the chassis up, which also incorporated original metal tubing from a donor frame. 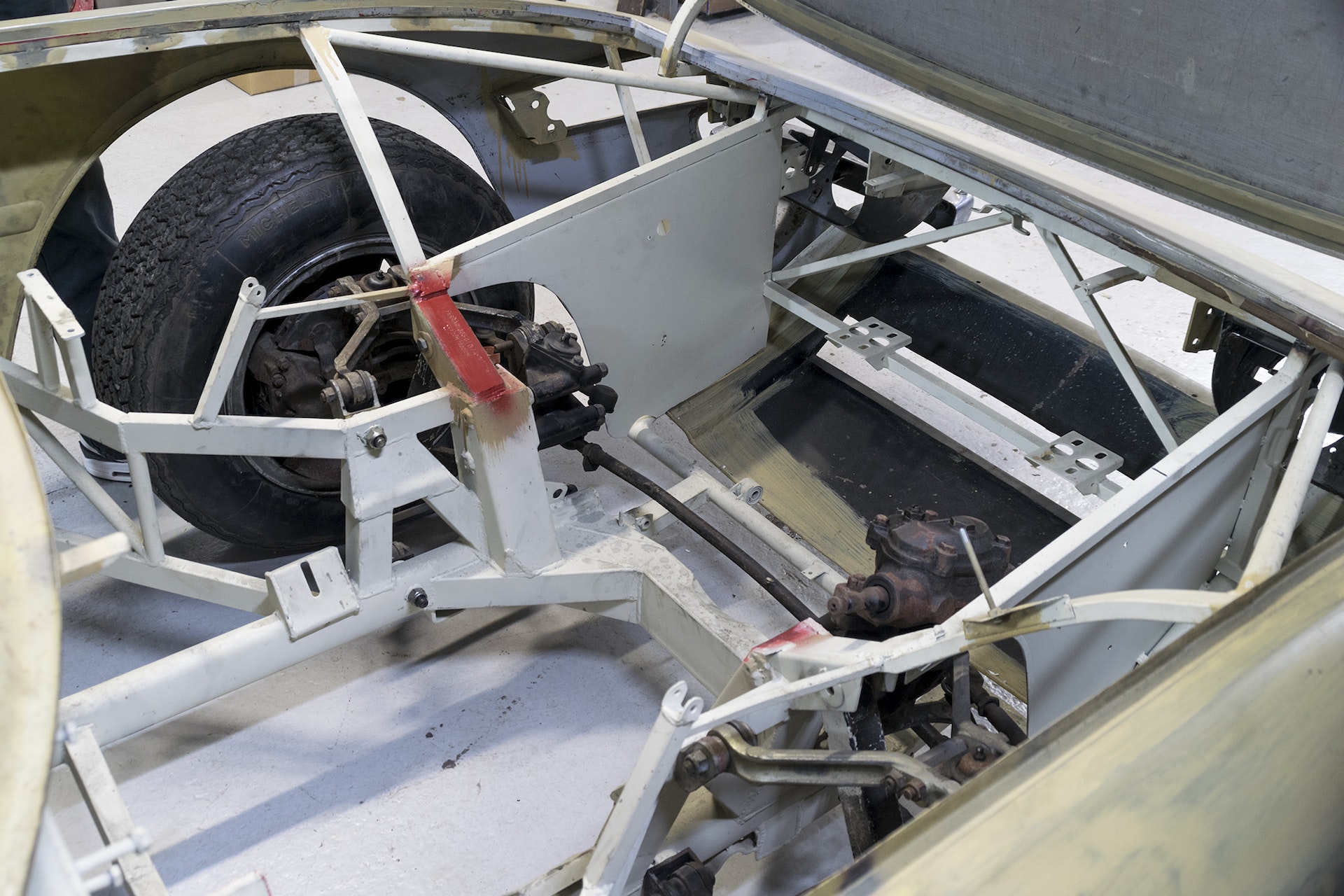 Hietbrink expertly integrated new old stock panels with original Scaglietti sections, recreating the iconic Berlinetta body. The car’s original front crossmember, with the factory chassis stamp, remains intact, as well as numerous original braces and other structural elements. Its body number of ‘486’ is found stamped in numerous places around the car, denoting many original components throughout. The car is now as straight and solid as when it first left the factory - and almost certainly even better. 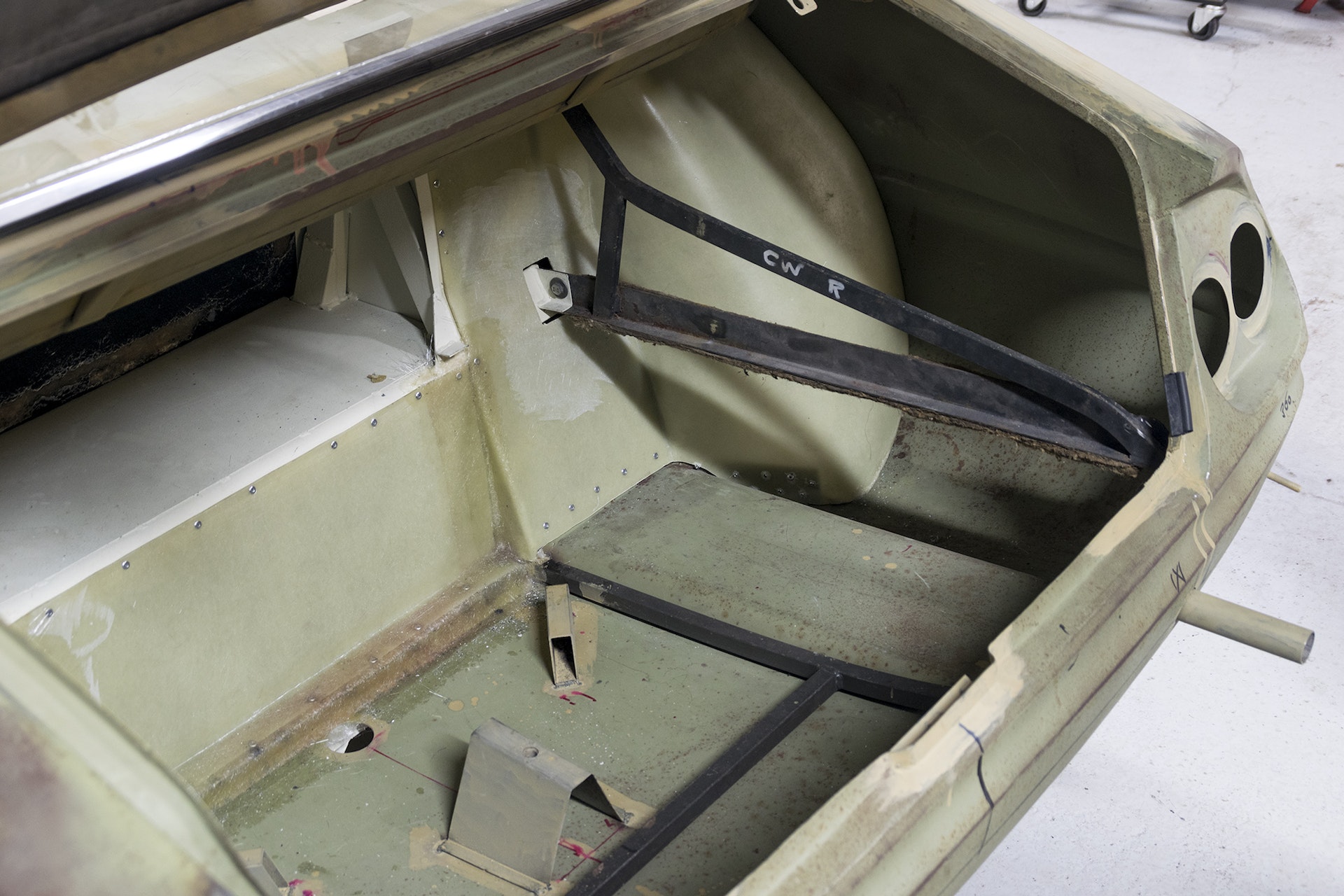 This Ferrari 365 GTB/4 Daytona is now offered as a ‘complete’ and partially finished project, retaining its original 4.4-litre Colombo V12 engine, as well as dozens of boxes of components that are stored with the car in large crates. The engine itself was initially stuck from decades of inactivity, but once the heads were off, the main components were found to be in remarkably good condition. The original speedometer remains in the instrument binnacle, along with all of the other Veglia Borletti gauges, and shows just 26,117 miles from new. 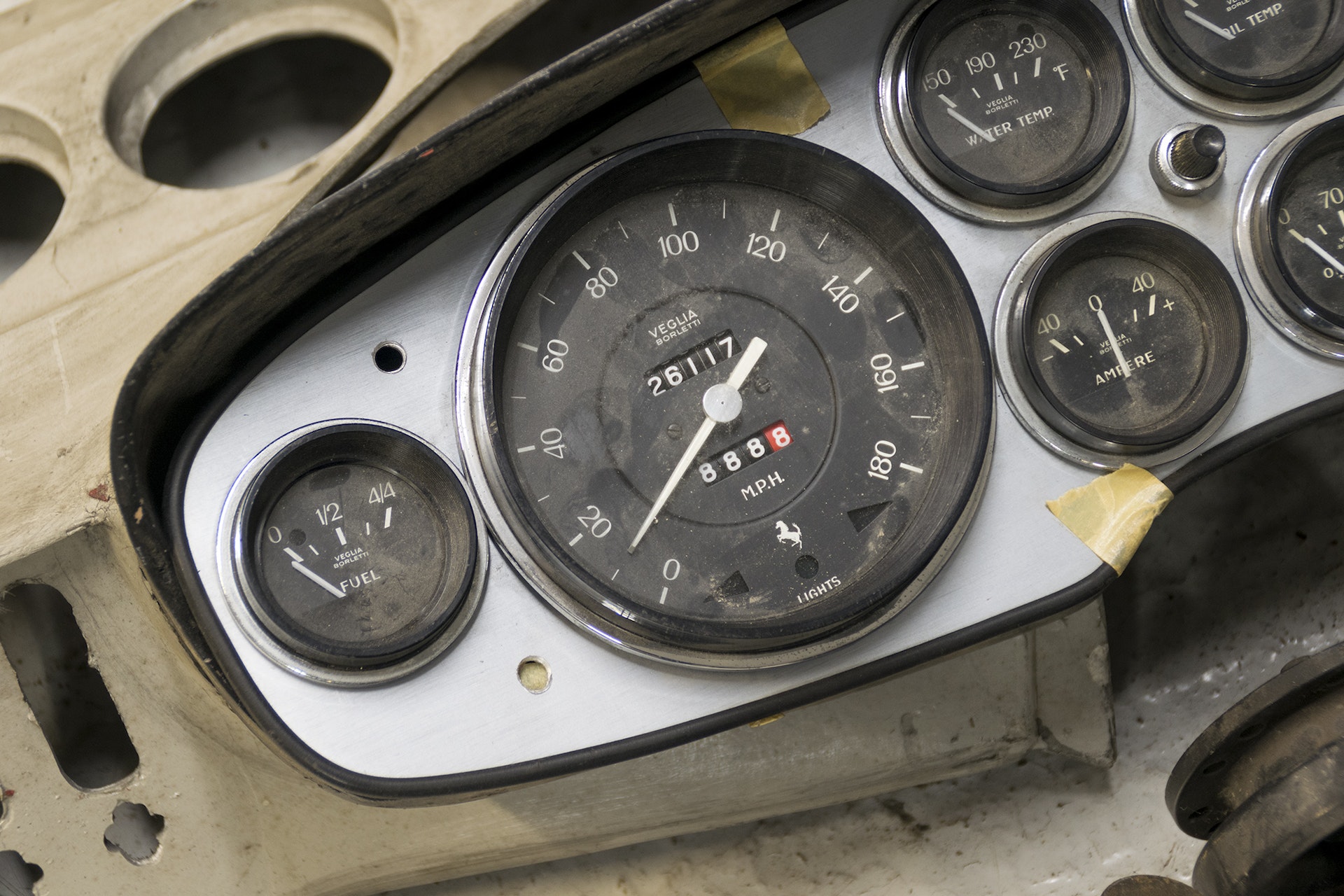 There are no items that are known to be missing, and because the vendor has acquired numerous brand-new parts over the last decade, there are more likely to be duplicates rather than omissions. In the photo gallery below, there are lists of parts catalogued from the contents of the main storage crates. These lists are not exhaustive, but will provide peace of mind for bidders who can check the presence of major components in particular. 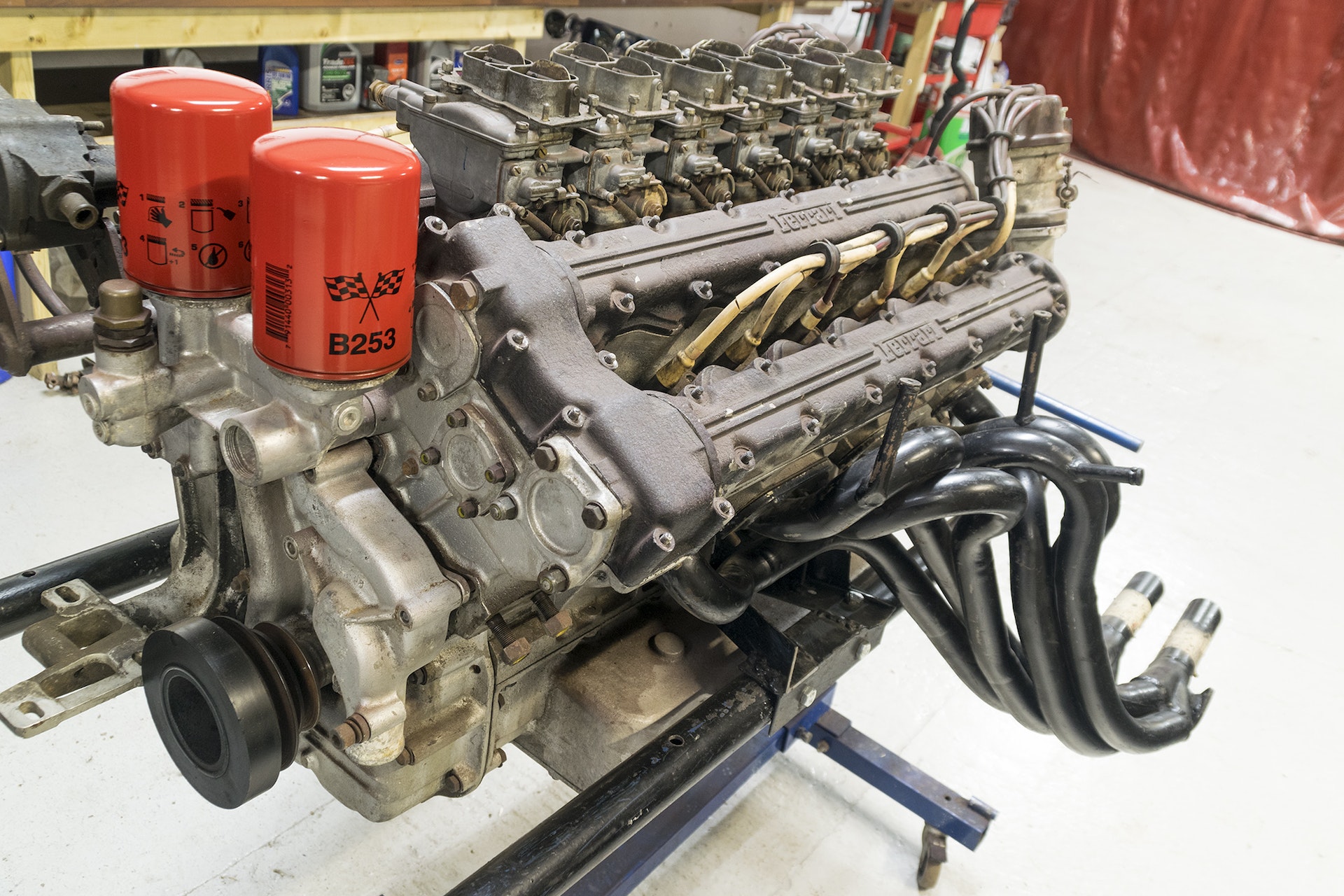 Now that the chassis and bodywork have been fully restored, the next owner can decide on what colour it should be painted. Whether they choose to stick with the original Argento Auteuil (silver grey) or opt for another period hue, this project leaves plenty of scope to add bespoke touches. Beyond the paintwork, the next phase is a comprehensive mechanical refurbishment and rebuild, including refinishing of components and almost certainly a full re-trim of the interior.

While originally registered on the cherished plate of ‘JRC 40’, this Ferrari was re-registered in August 1972 as ‘KWE 528J’ - and the charming engraved number plate from the 1970s remains with the car. It is currently registered in the vendor’s name with a valid V5C document, and is accompanied by copies of all the original Maranello Concessionaires correspondence regarding the factory order, collection and early service history. The original buff log book also remains with the car, recording the details of the first three registered keepers. 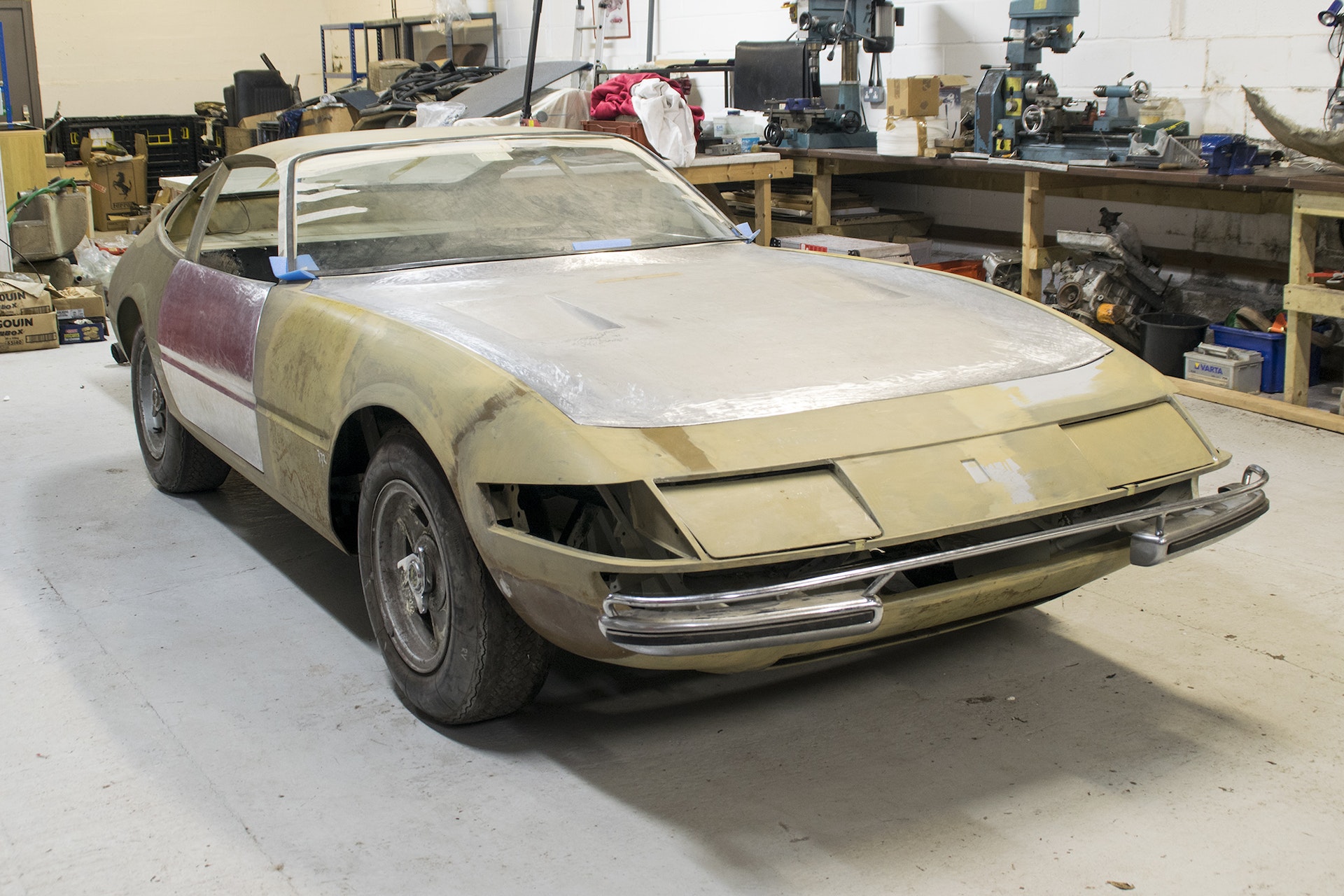 Fewer than 160 examples of the Daytona were sold new to the UK, and this represents a compelling opportunity to acquire one of those original right-hand drive cars. Its freshly completed chassis and body restoration make this exciting project a known quantity, which is ripe to be taken on by a passionate and imaginative enthusiast.