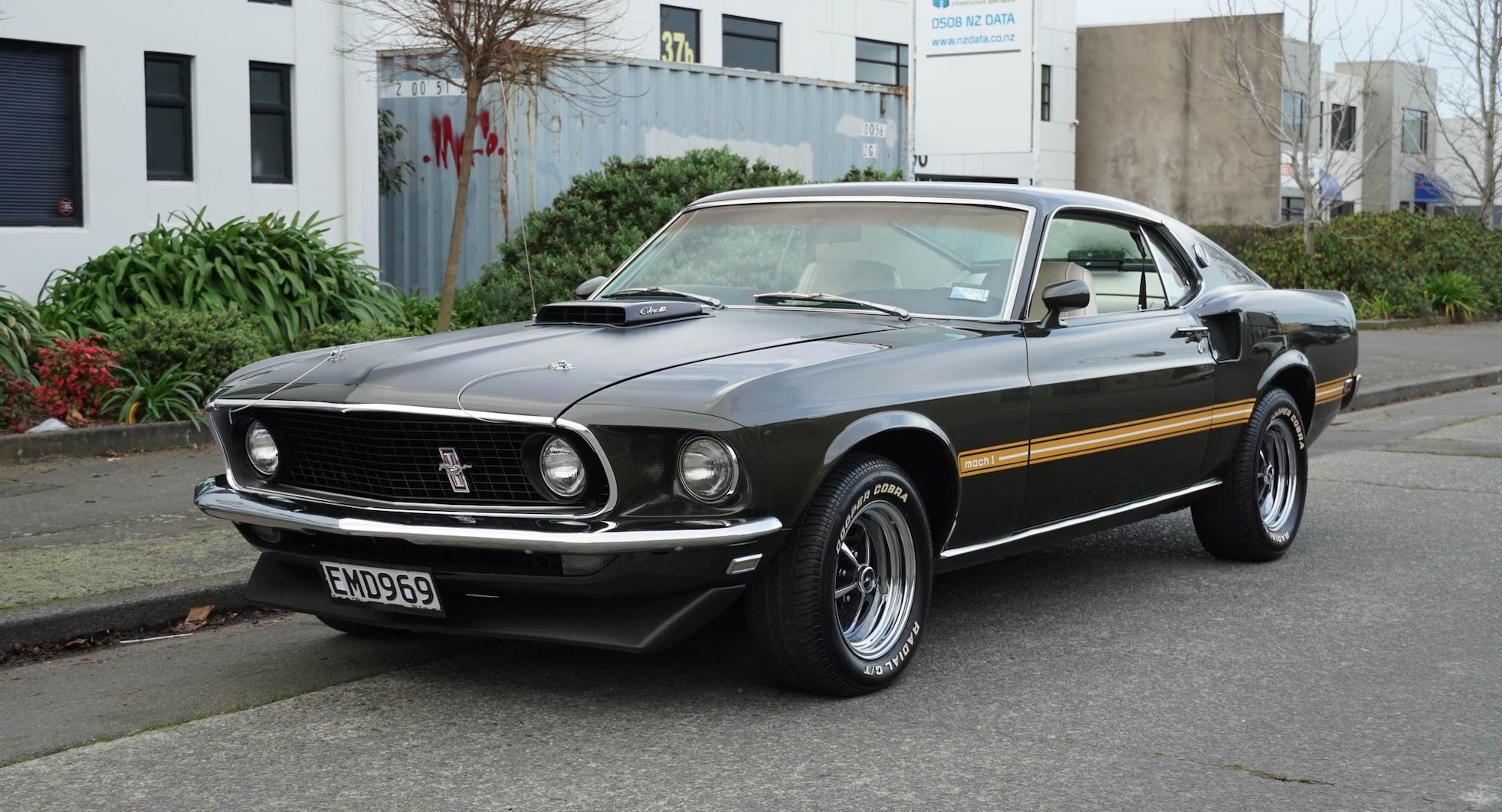 This 1969 Ford Mustang Cobra Jet is a pristine example of one of the most iconic models from the golden era of muscle cars. It is powered by the 428 cu in (7.0-litre) V8 ‘Cobra Jet’ engine with four-barrel carburettor and Ram Air induction, and driven through the four-speed close-ratio manual transmission. The indicated mileage is just 2,650 miles, which is not warranted. 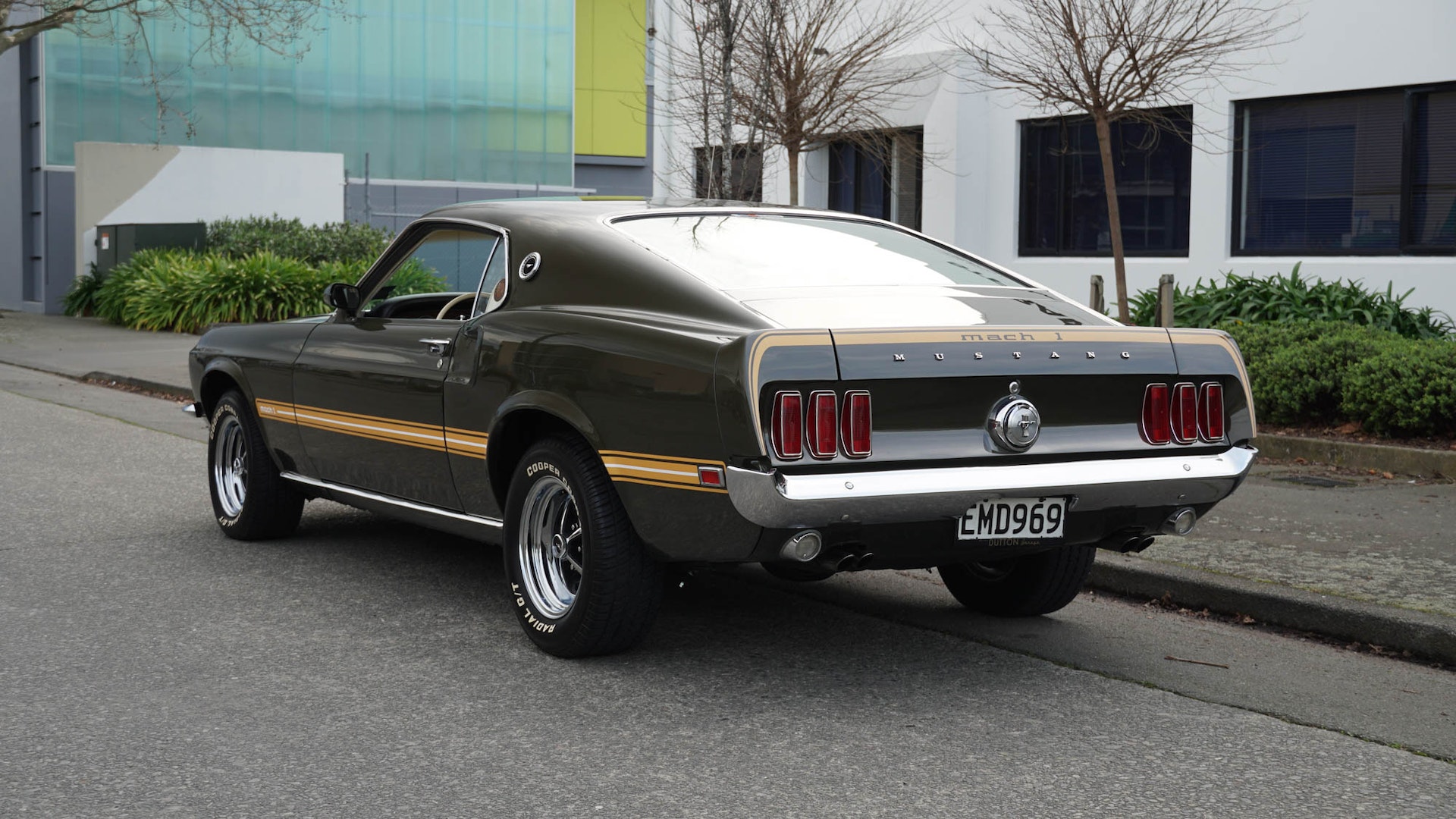 The Cobra Jet engine was introduced to the Mustang range in 1968, which was followed closely by the launch of the Mach 1 performance package. This left-hand drive car is a genuine R-code example, manufactured at the San Jose, California factory in April 1969. It was specified with a number of desirable options, including power steering, the ‘shaker’ hood and the front chin spoiler. More recently, the car has been the subject of an extensive restoration, and now presents superbly. 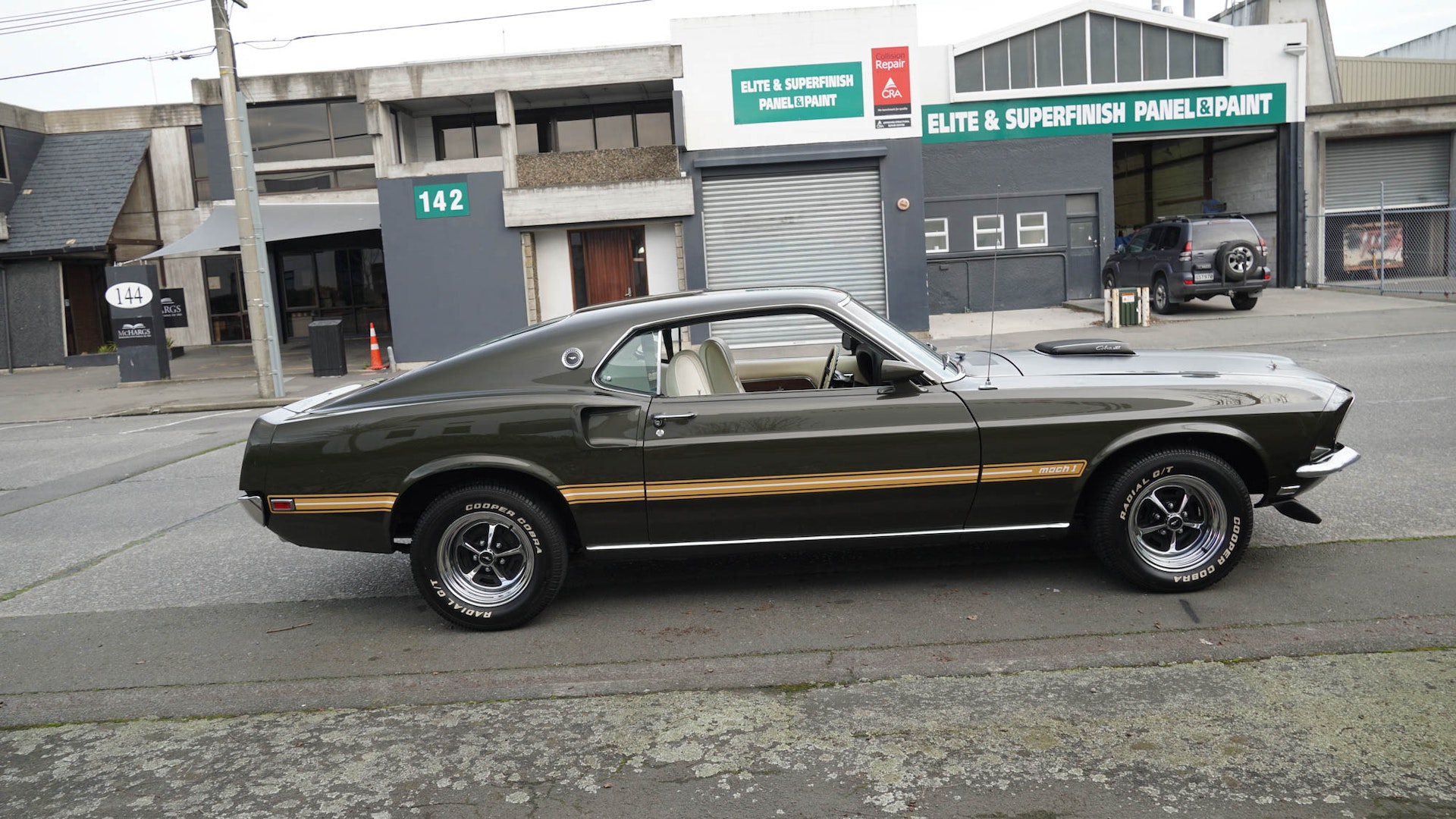 Its Black Jade paintwork is described by the vendor as being in excellent condition. There is a glossy, even finish around the whole car - and it is perfectly set off by the gold ‘Mach 1’ stripes and script down the flanks and around the rear spoiler. The only significant blemish is some chipped paint around the top of the nearside rear wheel arch. 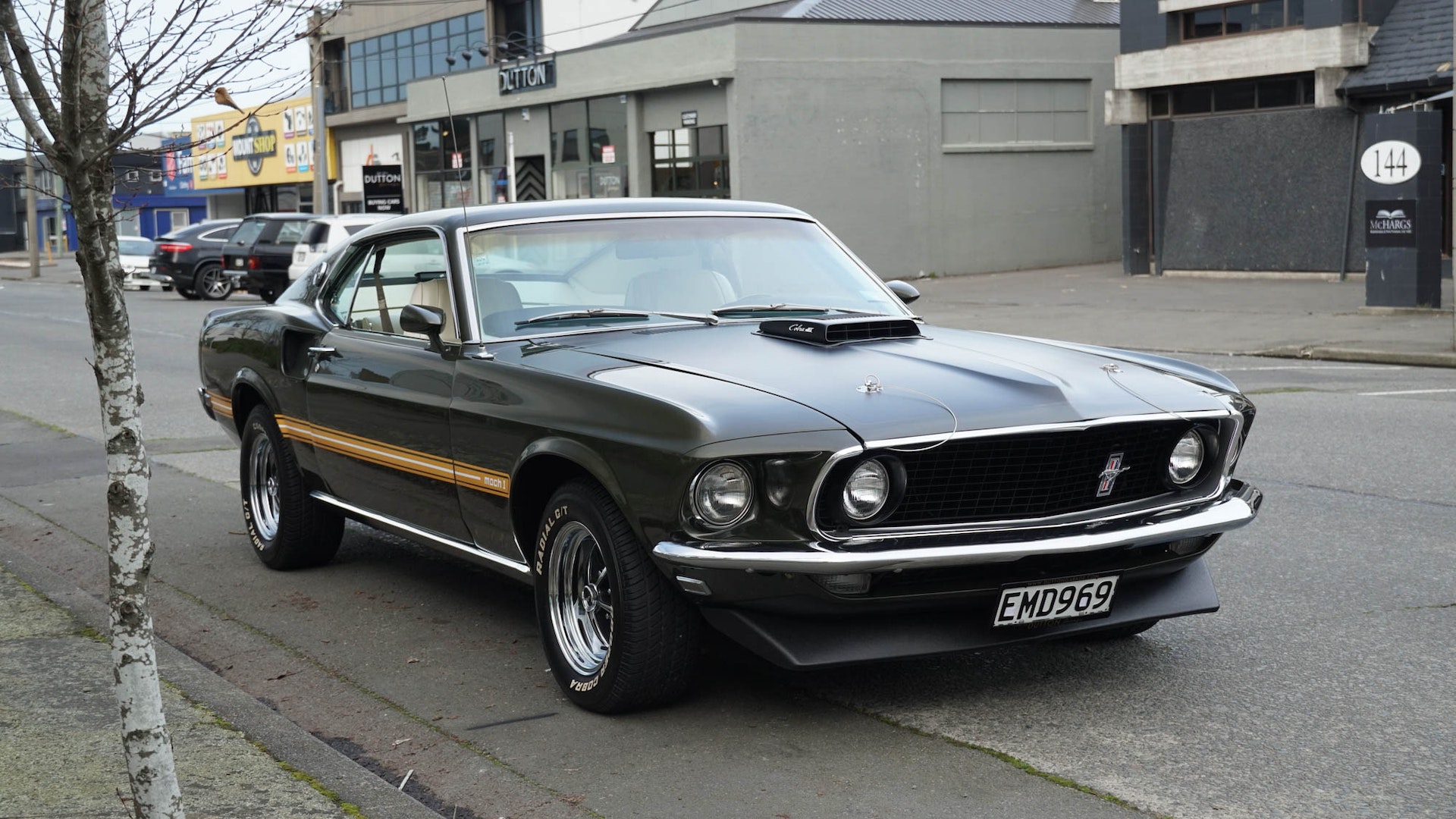 The sought-after ‘shaker hood’ bonnet features pin fastenings, and the front of the car features the optional chin spoiler in the correct black finish. All of the chromework around the body is in very good order. The car sits on a set of five-spoke black and polished steel 14-inch rims, which are free of blemishes and secured by pristine wheel bolts. Inside, the ‘Deluxe’ interior has been fully re-trimmed, with the high-back front seats and rear seats upholstered in soft cream smooth vinyl and ‘knitted’ vinyl finishes. The dashboard is trimmed in black vinyl, complete with the original simulated teak wood grain panels around the instrument dials and in the door cards. Under foot, the floors are fitted with black carpets and red overmats. The console is equipped with a JVC radio cassette player. 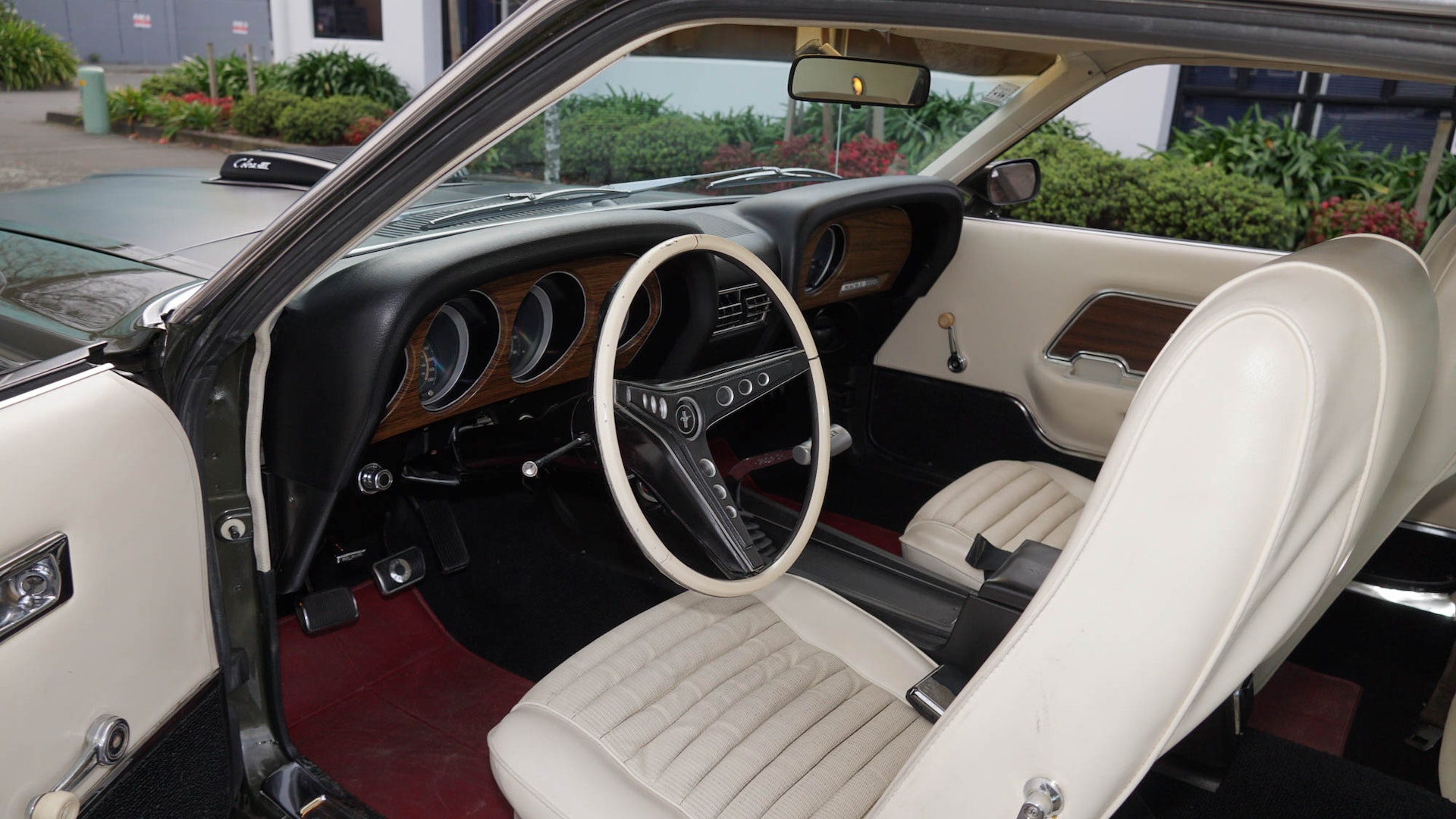 Lifting the bonnet reveals an engine bay that presents superbly. The imposing Cobra Jet engine sits far back, accented by the bright blue of the air cleaner, and topped by the ribbed bonnet scoop. It benefits from having a recent thorough service, including renewal of all fluids. The most recent technical inspection took place in July 2019, which resulted in no warnings or advisories. All four wheels are shod with Cooper Cobra Radial G/T tyres, in size 225/60 R14 at the front and 235/60 R14 at the rear. 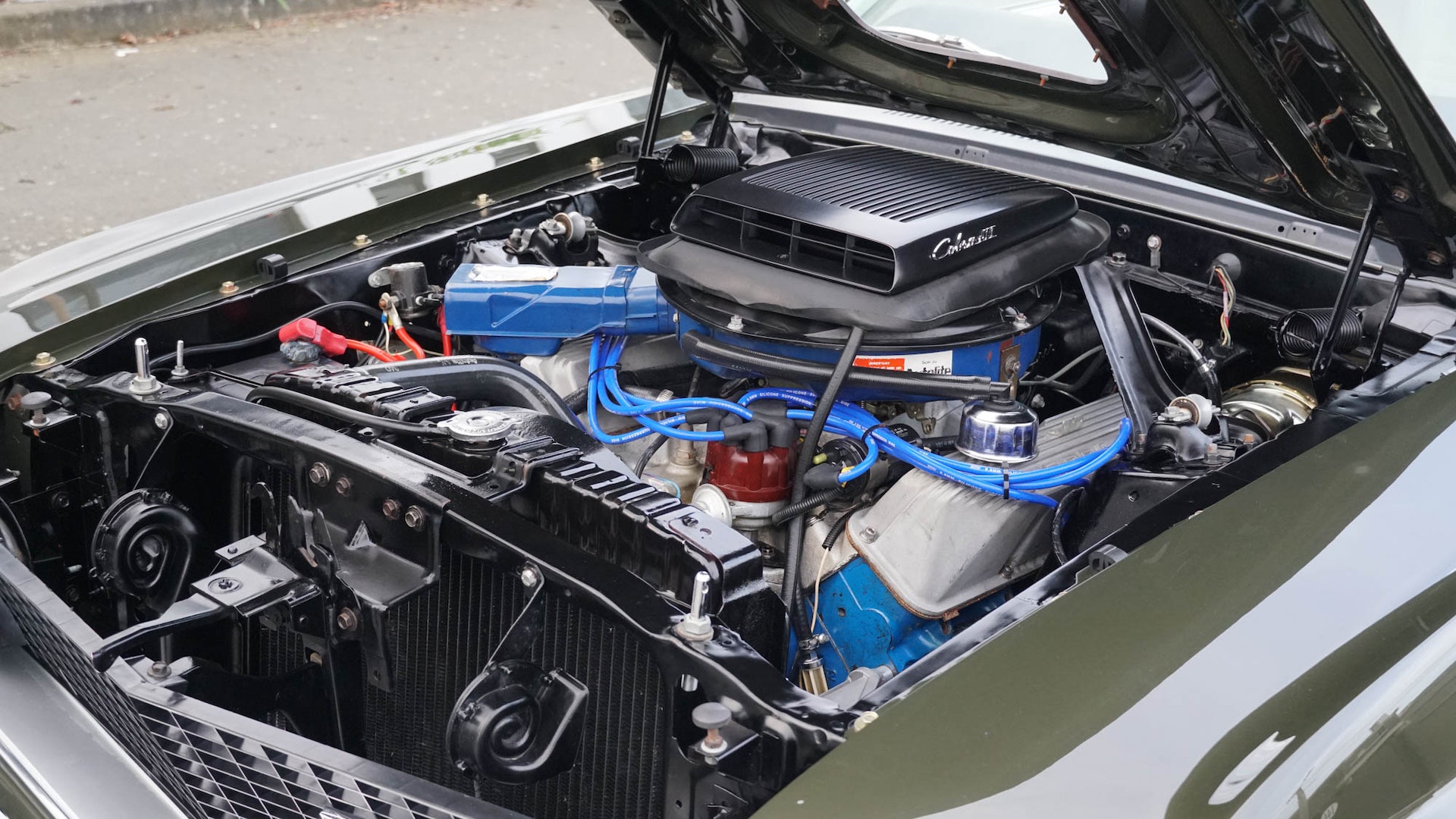 This 1969 Ford Mustang Mach 1 Cobra Jet is a fantastic example of one of the most significant American performance cars of its era. It is presented in pristine condition - a true credit to its fastidious former keeper - and is ready to thrill a new owner with its power and presence.

Please note: in the event of a successful auction, the winning bid will also include free delivery to the next owner's local port of entry in Europe.