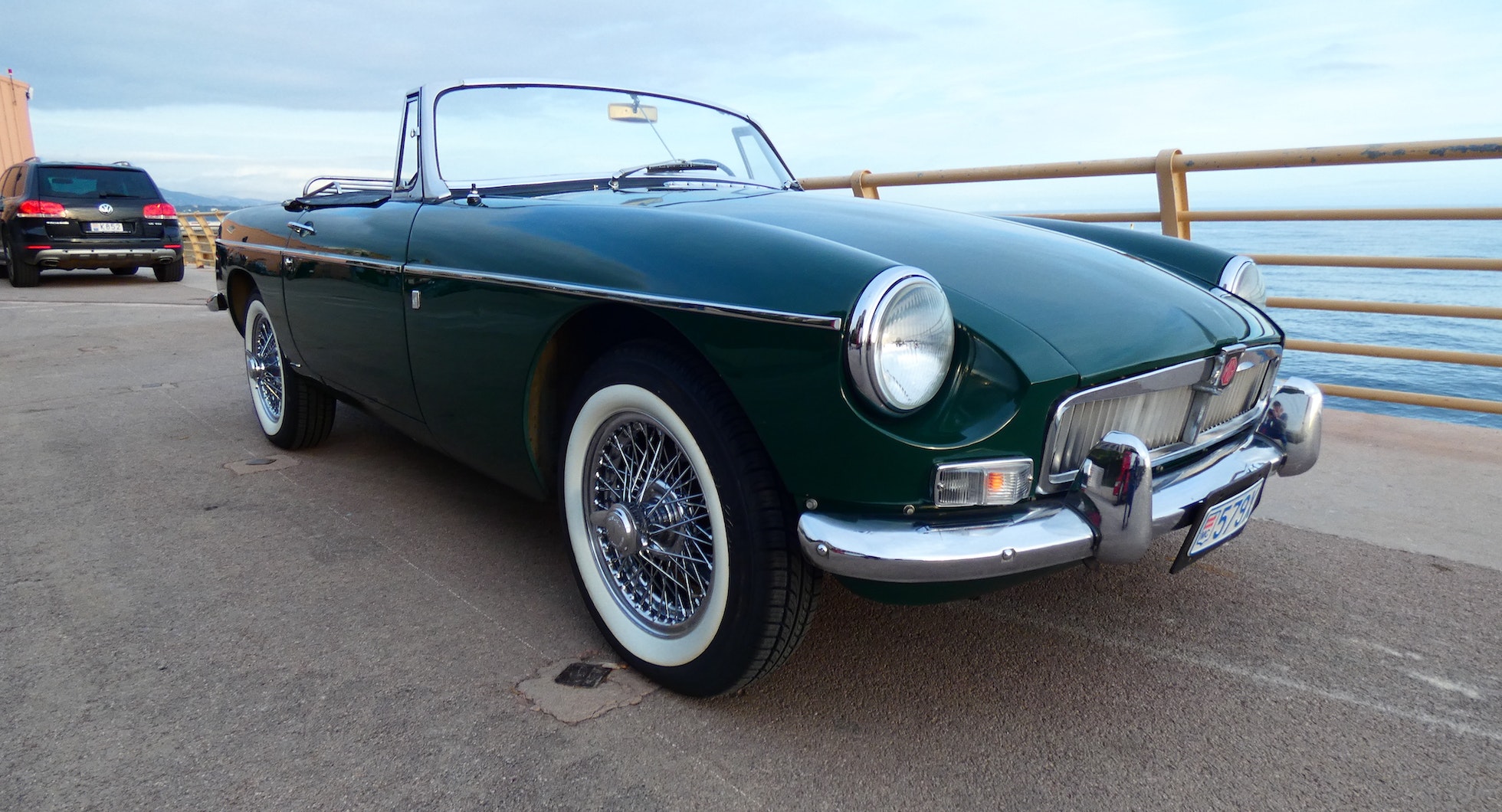 This 1967 MGB Roadster is a handsome example of one of Britain’s most popular classic sports cars — one that is well known for being fun to drive yet also easy to maintain. It is powered by the 95bhp 1.8-litre B-Series engine with twin SU carburettors, with rear-wheel drive via a four-speed manual transmission. The odometer shows just 36,293 miles, and the car is currently garaged and registered in Monaco. 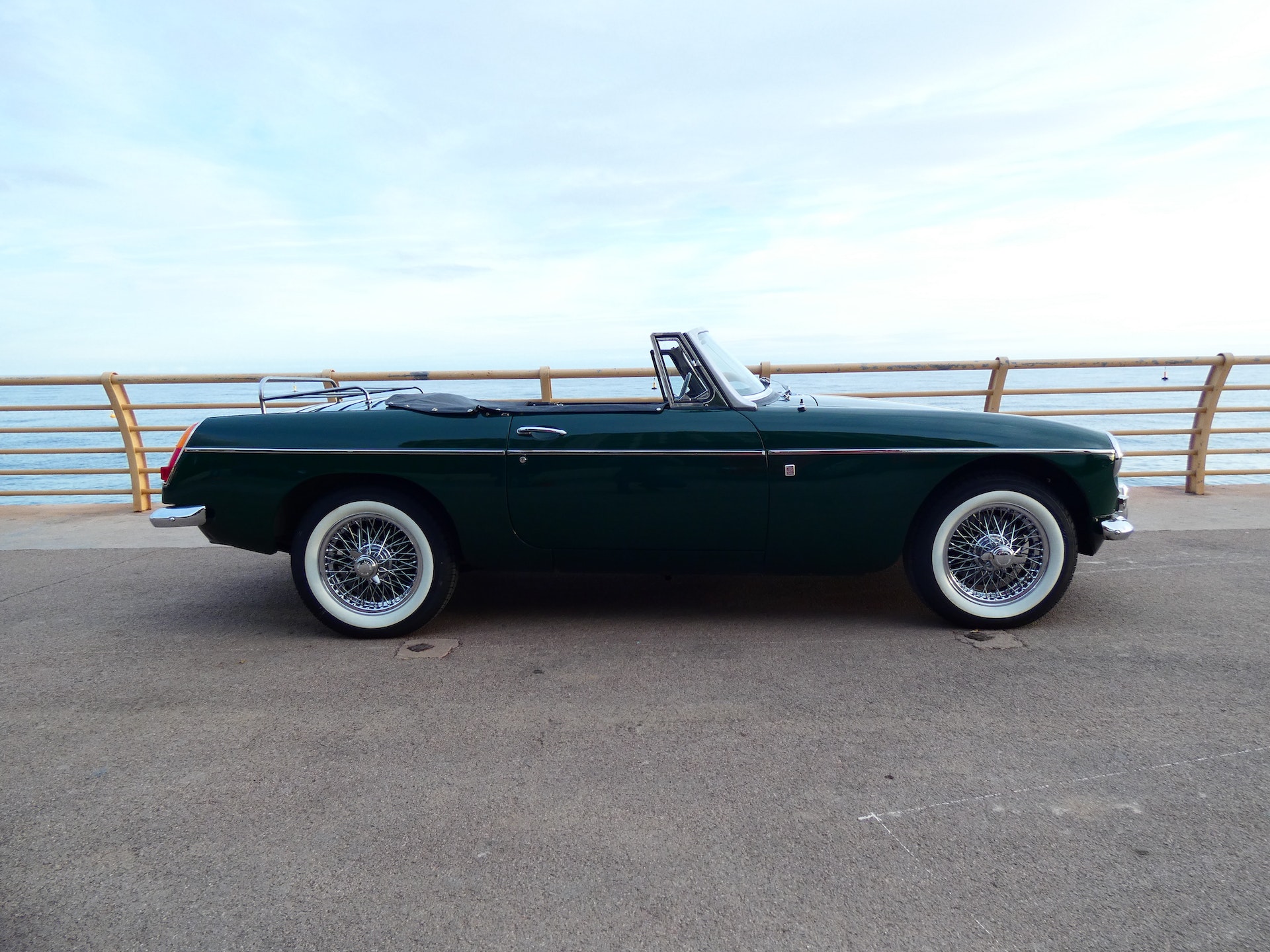 As an early model Roadster, this US-specification car benefits from the more powerful engine, before output was cut with the introduction of emission standards in 1968. It also features the original and elegant chrome bumper design, before the black plastic items were introduced in 1974, as well as the lower ride height that predates the change to meet US headlamp regulations. 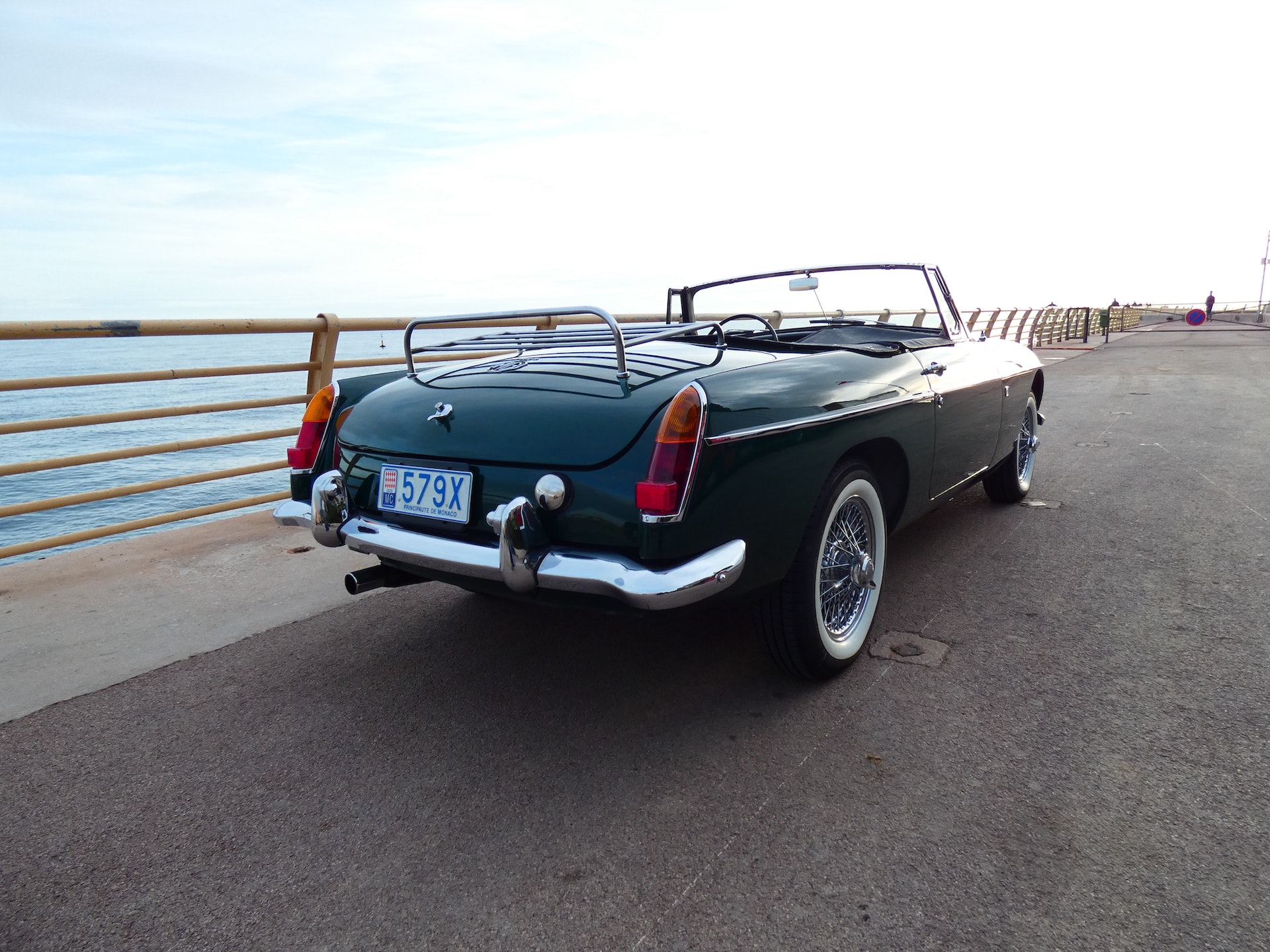 The car was owned by two gentlemen based in the United States prior to its purchase by the vendor five years ago. It was exported to the UK and arrived in 2016. Minor electrical changes were carried out to convert the car to European specification, and it was put through an MOT test on 11 February 2016, at 34,696 miles, which resulted in a first-time pass with no advisories whatsoever. In February 2017, the vendor imported the car to Monaco and registered it with the Département de l’Équipement, de l’Environnemente et de l’Urbanisme, being given registration number ‘579X’, which it wears today. 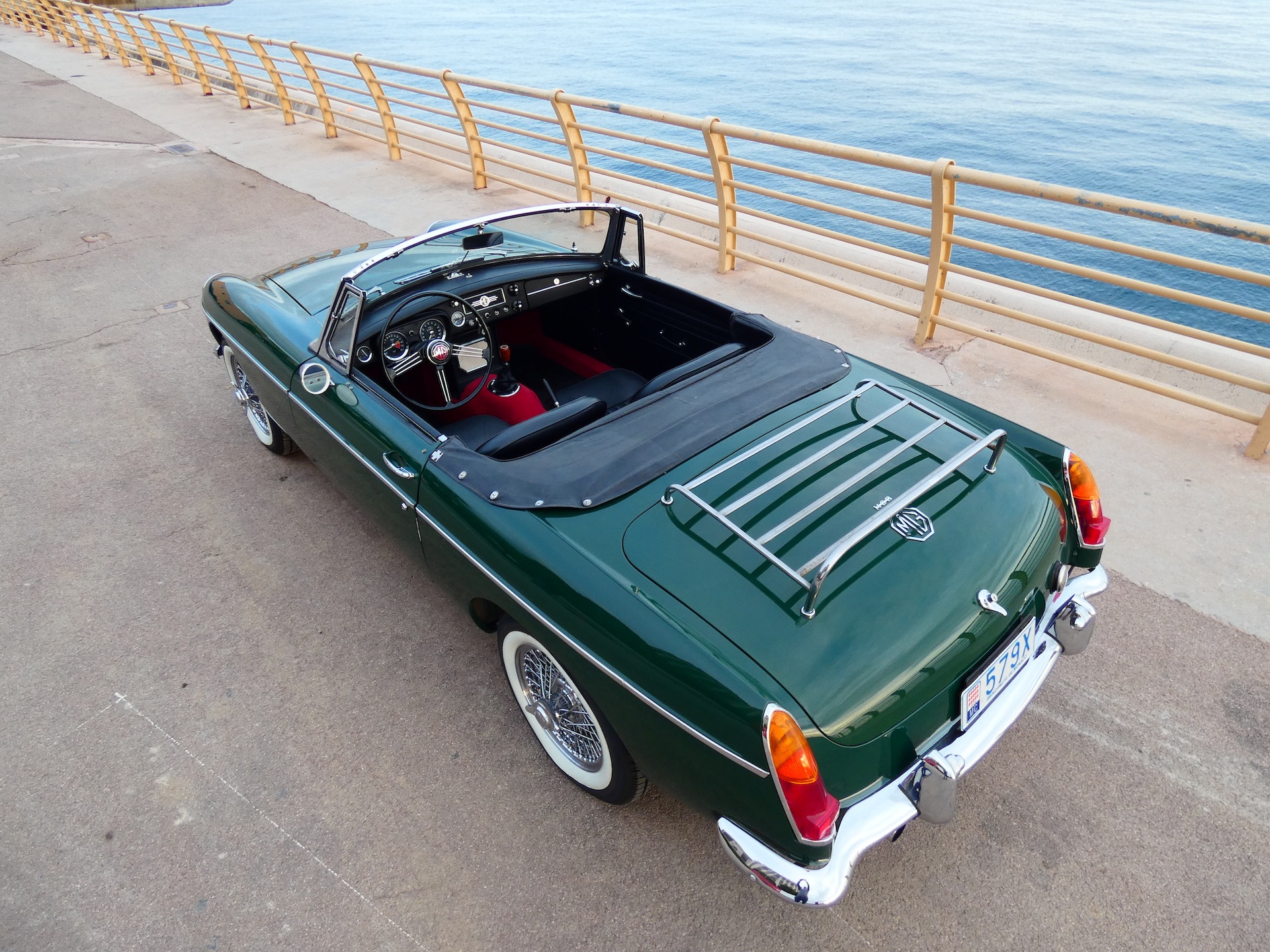 Its bodywork is described as being in excellent condition and is finished in the attractive colour of British Racing Green. The paint has a smooth and glossy appearance around the whole car, as the photos in the gallery below show. All of the chrome trim is in superb order, with very few imperfections to speak of. There is some minor pitting around the nearside front lens cover and grille, and some tarnishing on the luggage rack, but elsewhere has a bright and shiny appearance. 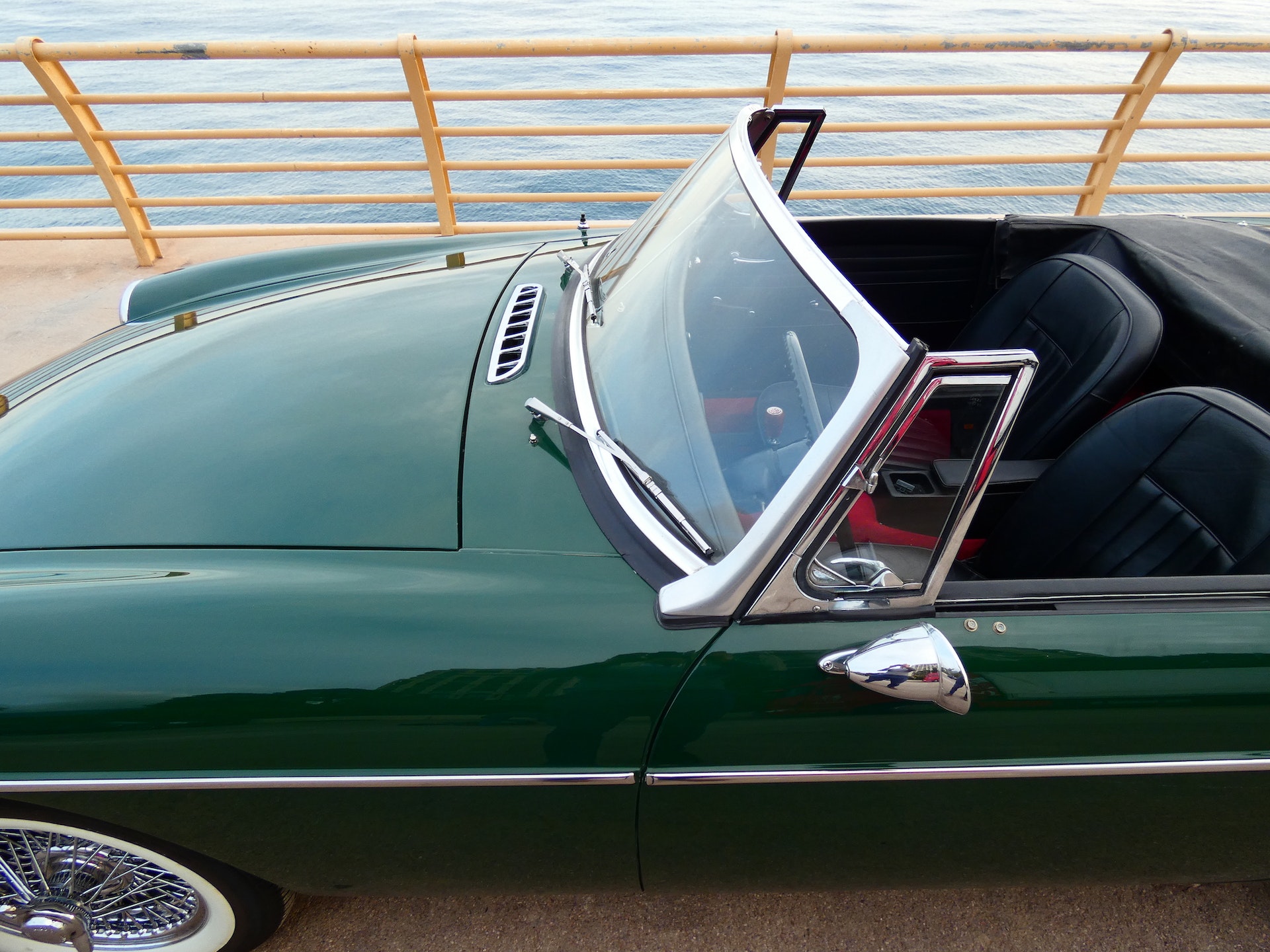 There are a few minor stone chips around the front, and on the lower sections of the bodywork from road debris, but the car presents very smartly indeed. The sills and underside also appear to be sound. The 14-inch wire wheels – including the full-size spare – are brand-new and are in great shape, with two-eared knock-off spinners. The tyres are freshly fitted Toyo 330 items with whitewall inserts. 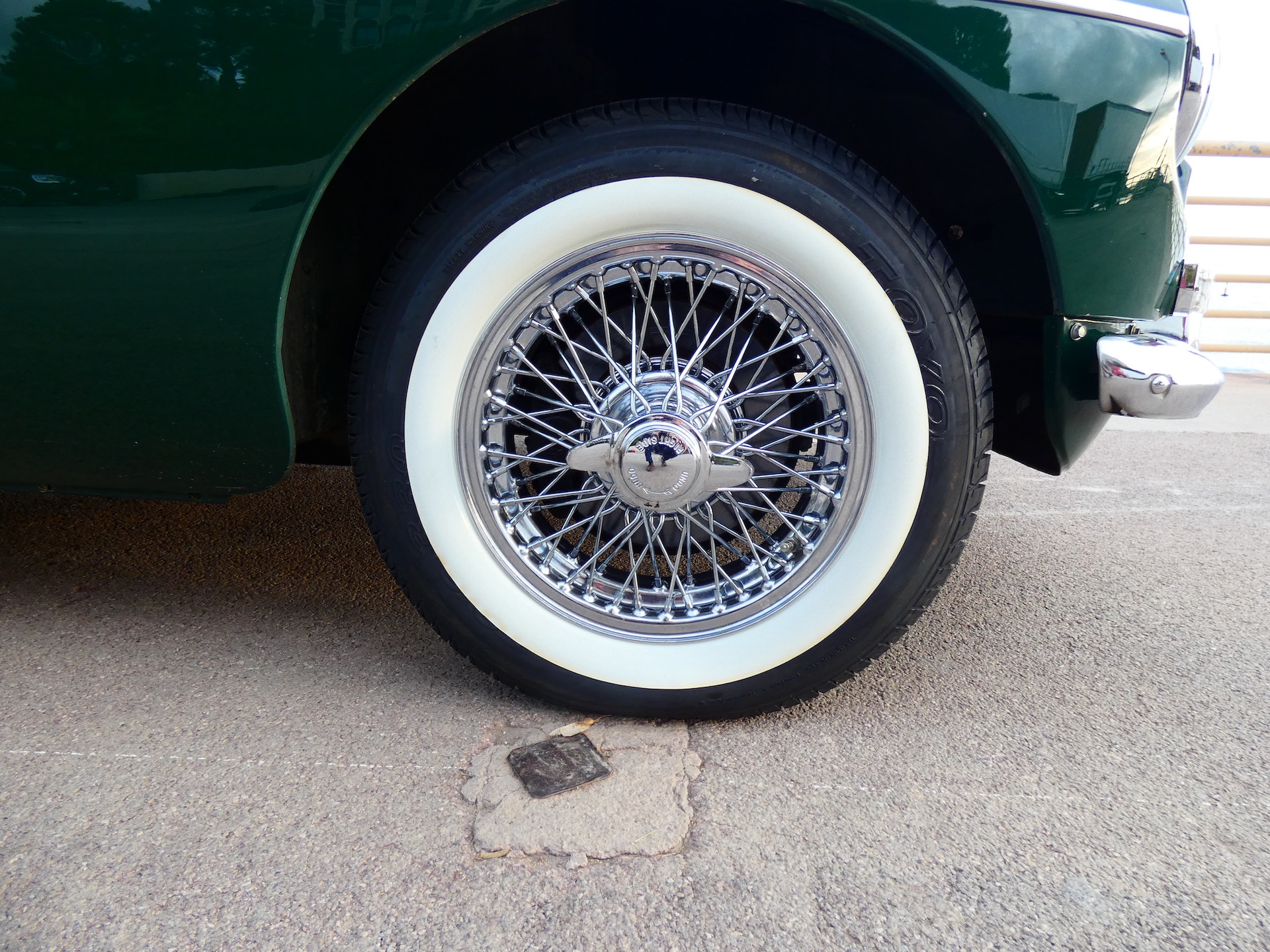 The interior has been refurbished in recent years, and remains in superb condition. Its black leather seats have been reupholstered and show only signs of light use. The carpets have been replaced with a contrasting bright red colour, and are finished with tailored black rubber MG floor mats. 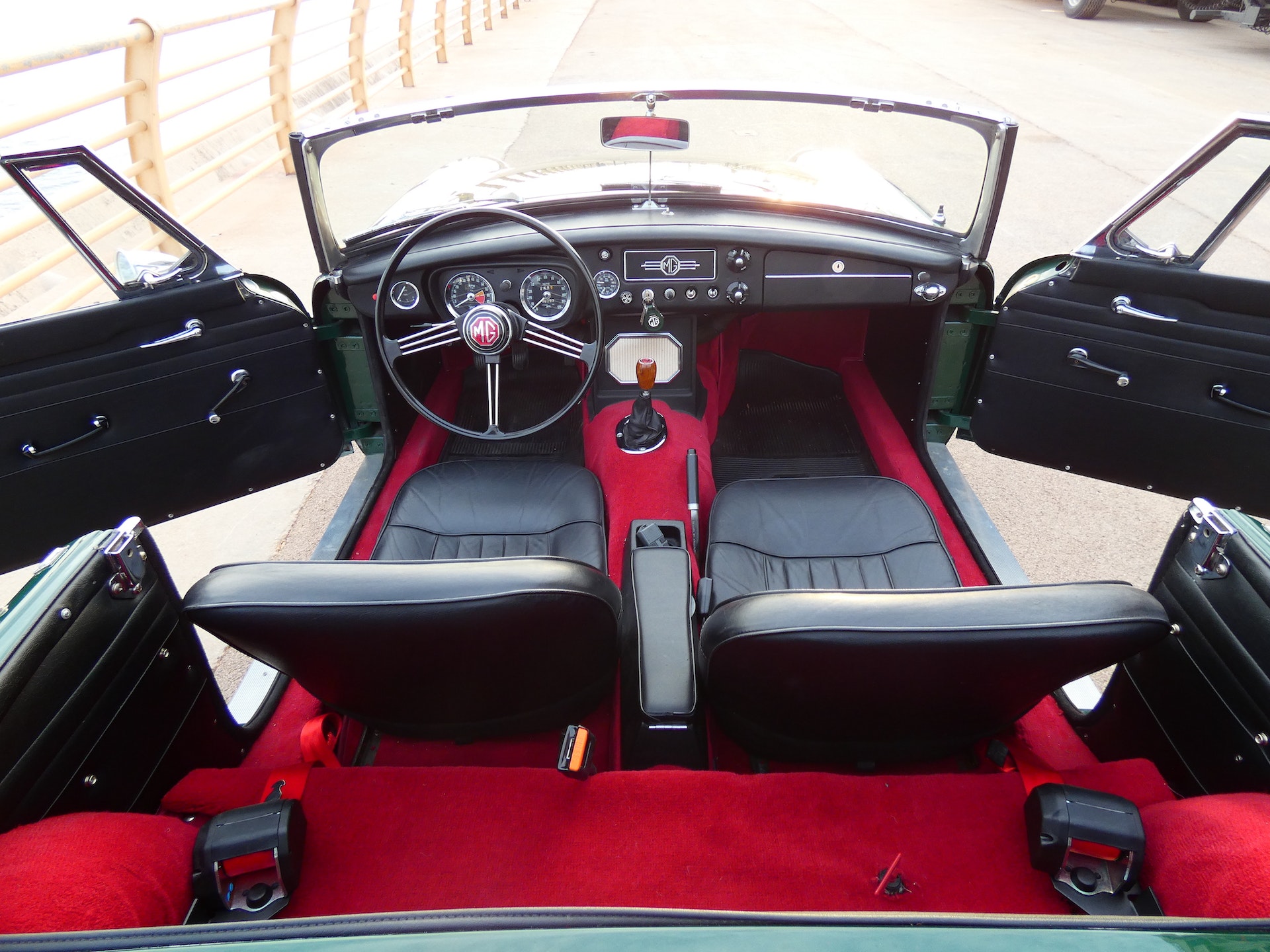 Both seat belts were replaced with modern inertia-reel items in June 2016 by MGOC Spares Limited, while the wooden gear knob and three-spoke MG steering wheel have also been recently renewed. A full-size spare wheel and tyre, tools and a jack can be found in the boot, and the tonneau cover snaps snugly over the cabin and shows very few marks. 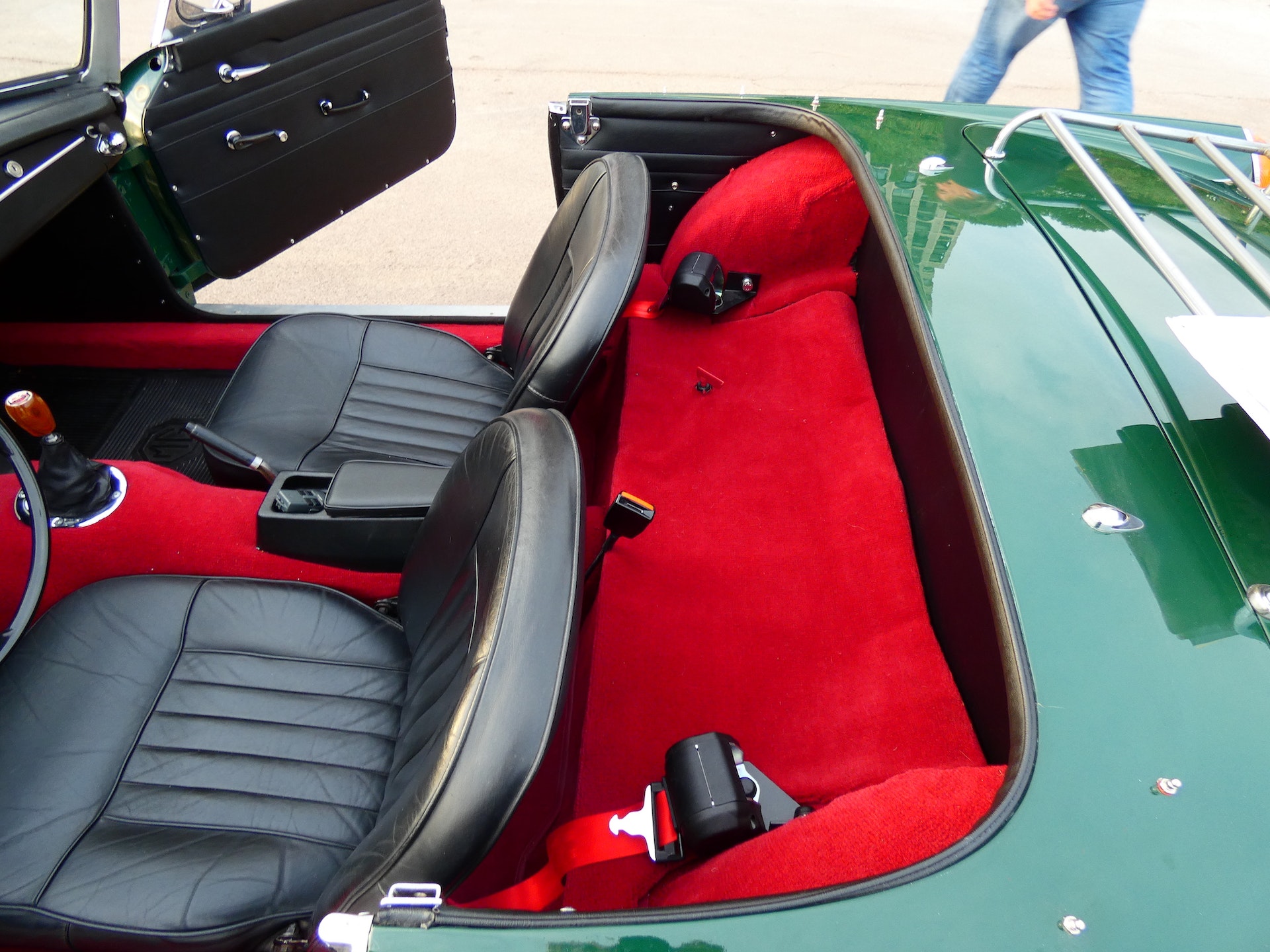 The car received a major service at the end of 2016, carried out by classic specialist Ratagaz Véhicules Historiques in Nice, France, where all liquids, lubricants, filters and spark plugs were replaced. In 2015, a new radiator fan and shroud were installed, along with a new battery box, and a replacement black hood. 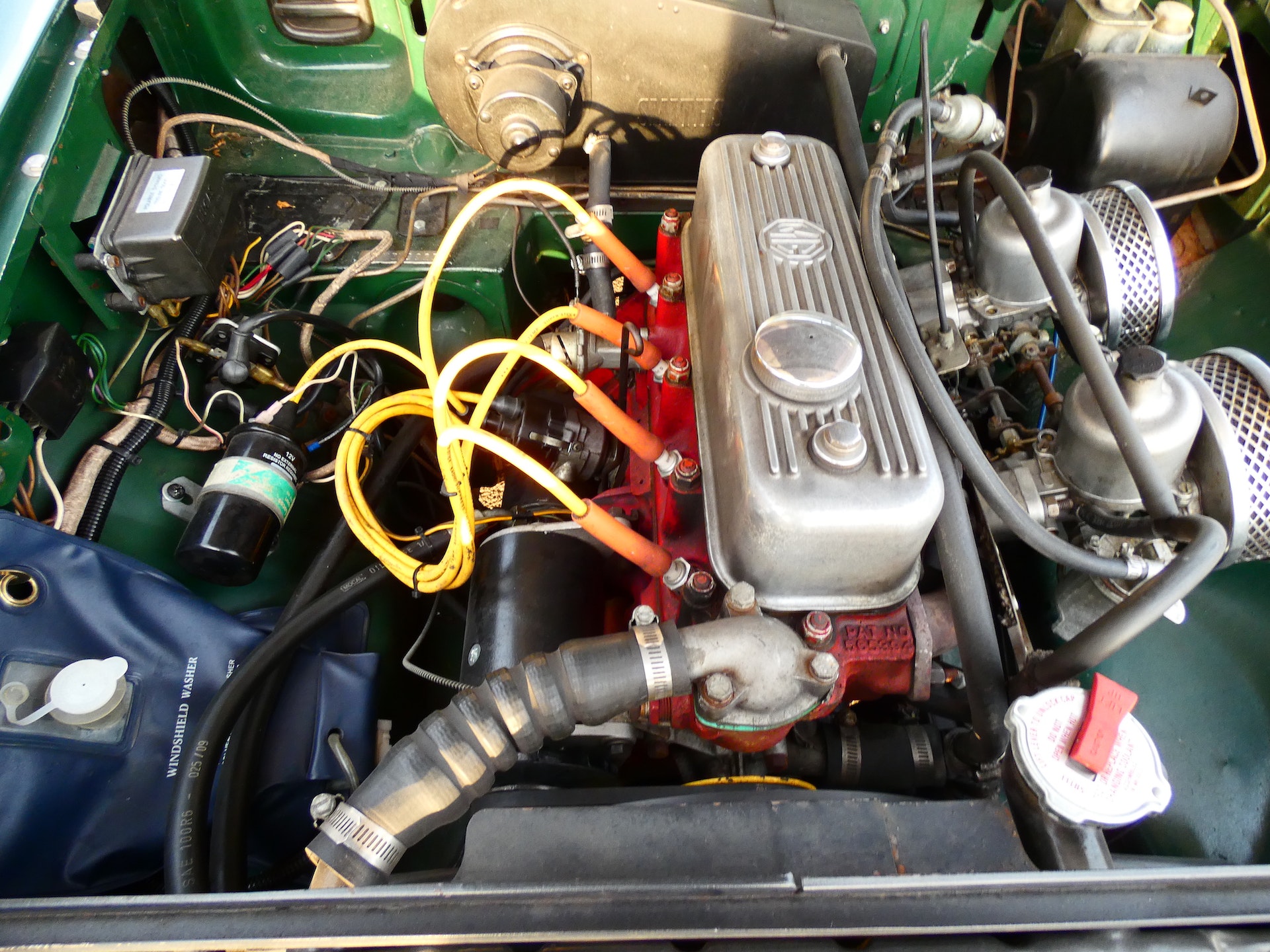 While still in the US in 2009, a cosmetic and electrical overhaul included new tail lamps, indicator lenses, toggle switches, wiper controls and turn signals. New chrome over-riders were fitted at the rear, along with a replacement bumper bar. The boot area was re-trimmed with black carpet, and new heater control and defroster knobs were installed in the cabin. The transmission was also rebuilt by gearbox specialist Quantum Mechanics in Connecticut. Accompanying the car is the original owner’s manual, as well as a large history file that details other work carried out over the last decade. 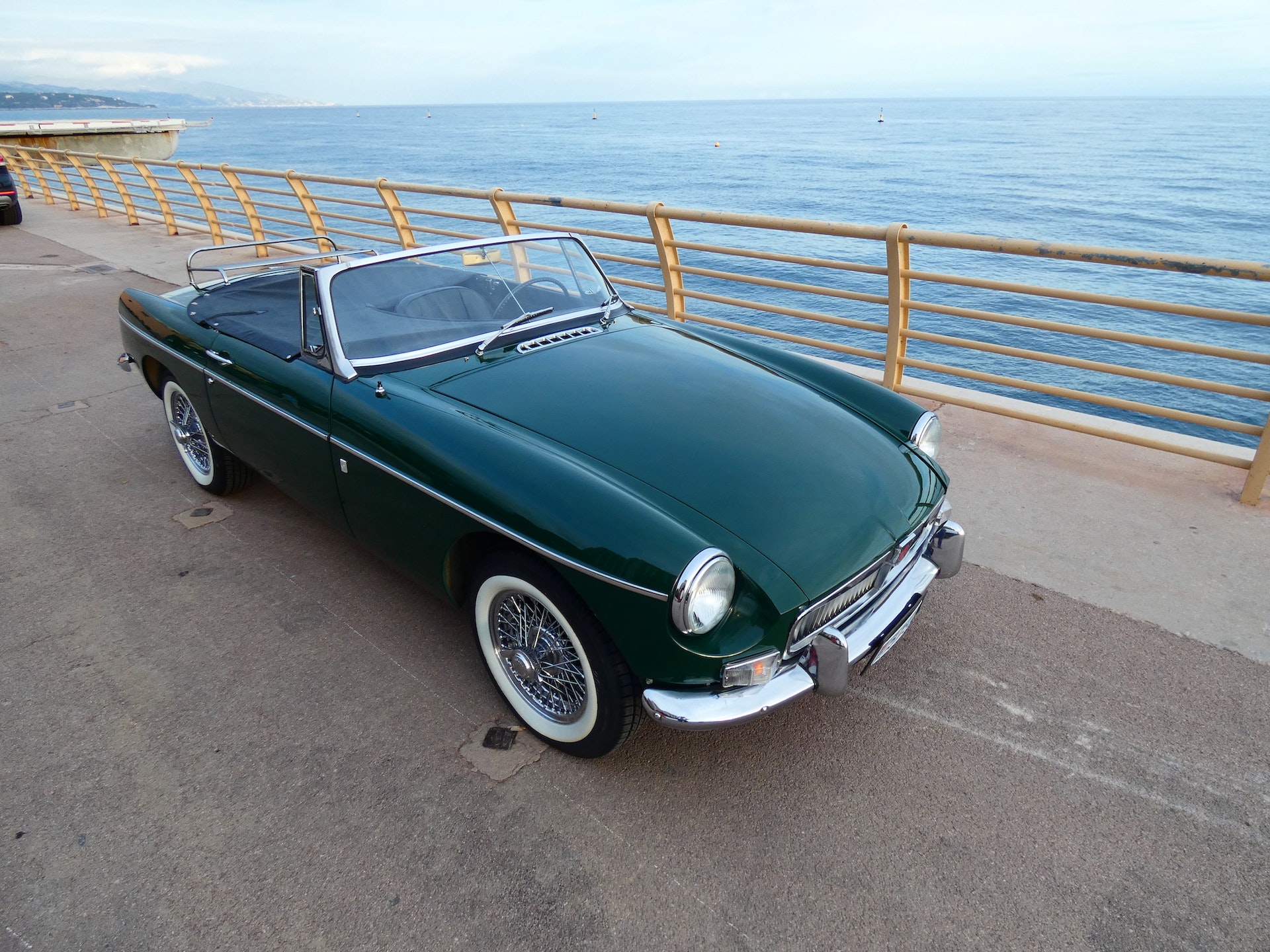 Along with being a very smart and classically elegant British sports car, this 1967 MGB Roadster is also practical enough for touring, and certainly delivers on the fun factor. The next owner can also immerse themselves in the enthusiastic network of MGB enthusiasts around the world, helping to keep their classic in fine fettle and sharing stories from the road.