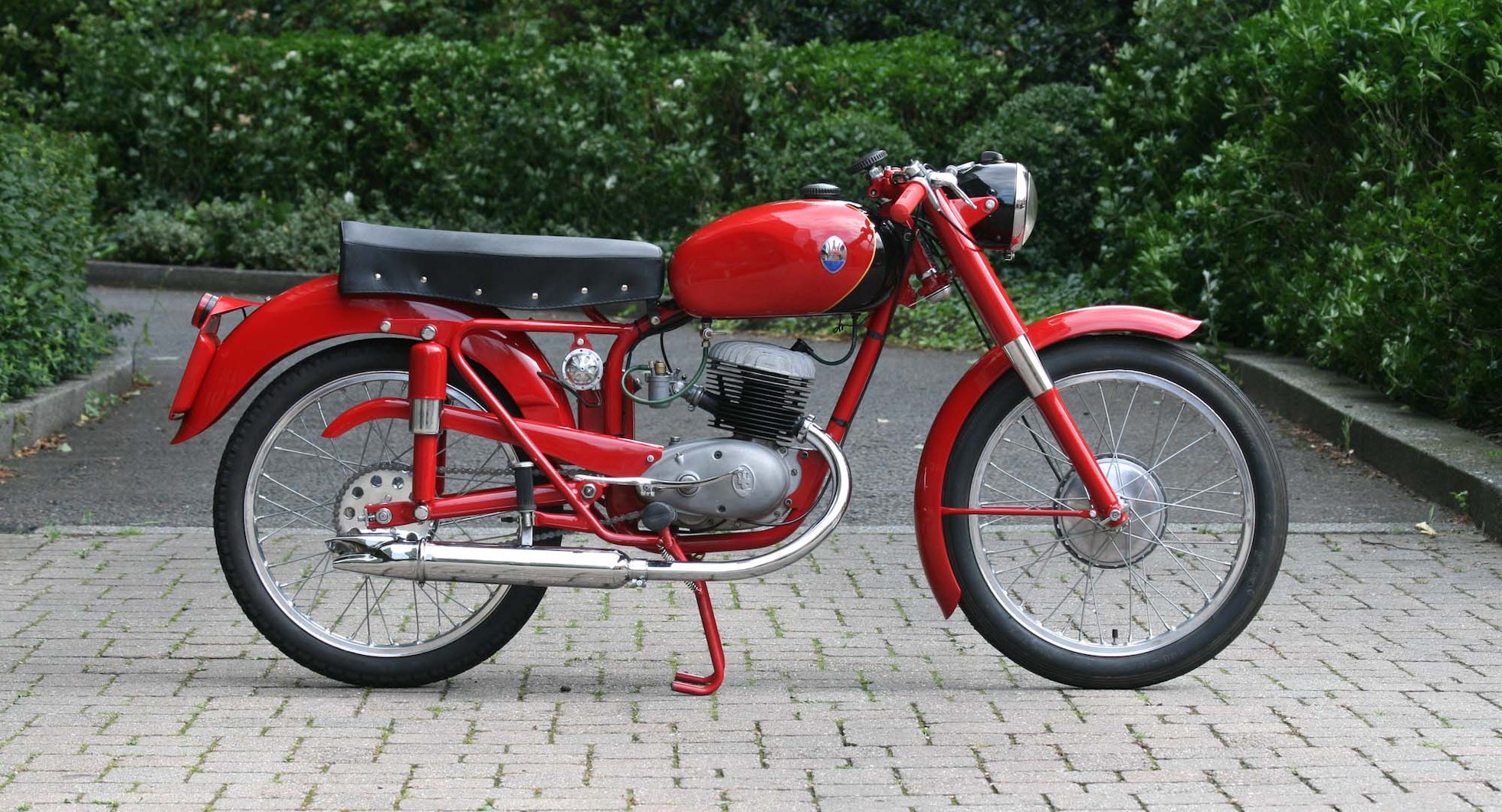 This 1955 Maserati 125 Turismo Veloce is a very rare model among the Italian marque’s two-stroke ‘motoleggera’ bikes, and is powered by a 6hp 123cc single-cylinder engine. The data plates and engine castings confirm that it is a frame and engine numbers-matching bike, and it has recently been given a full restoration. 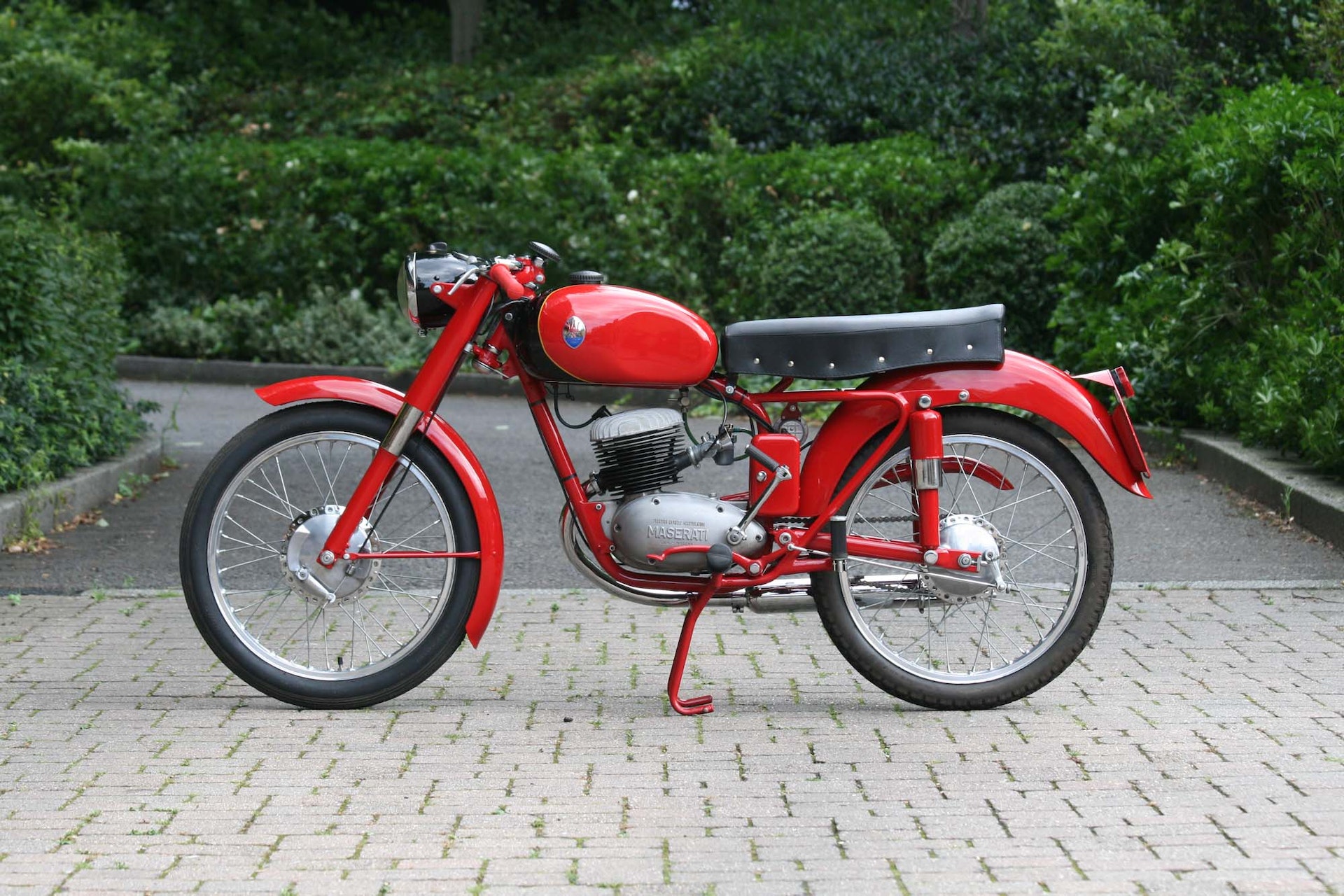 In post-war Europe, many automotive companies were diversifying into two-wheeled vehicles as people looked for more economical transport. Ida Orsi, who was charged with leading Maserati’s motorcycle development in the early 1950s, took the initiative and acquired the Italmoto company of Bologna. The first Maserati bike was therefore really just a rebadged Italmoto, but very soon the company had invested in new designs. 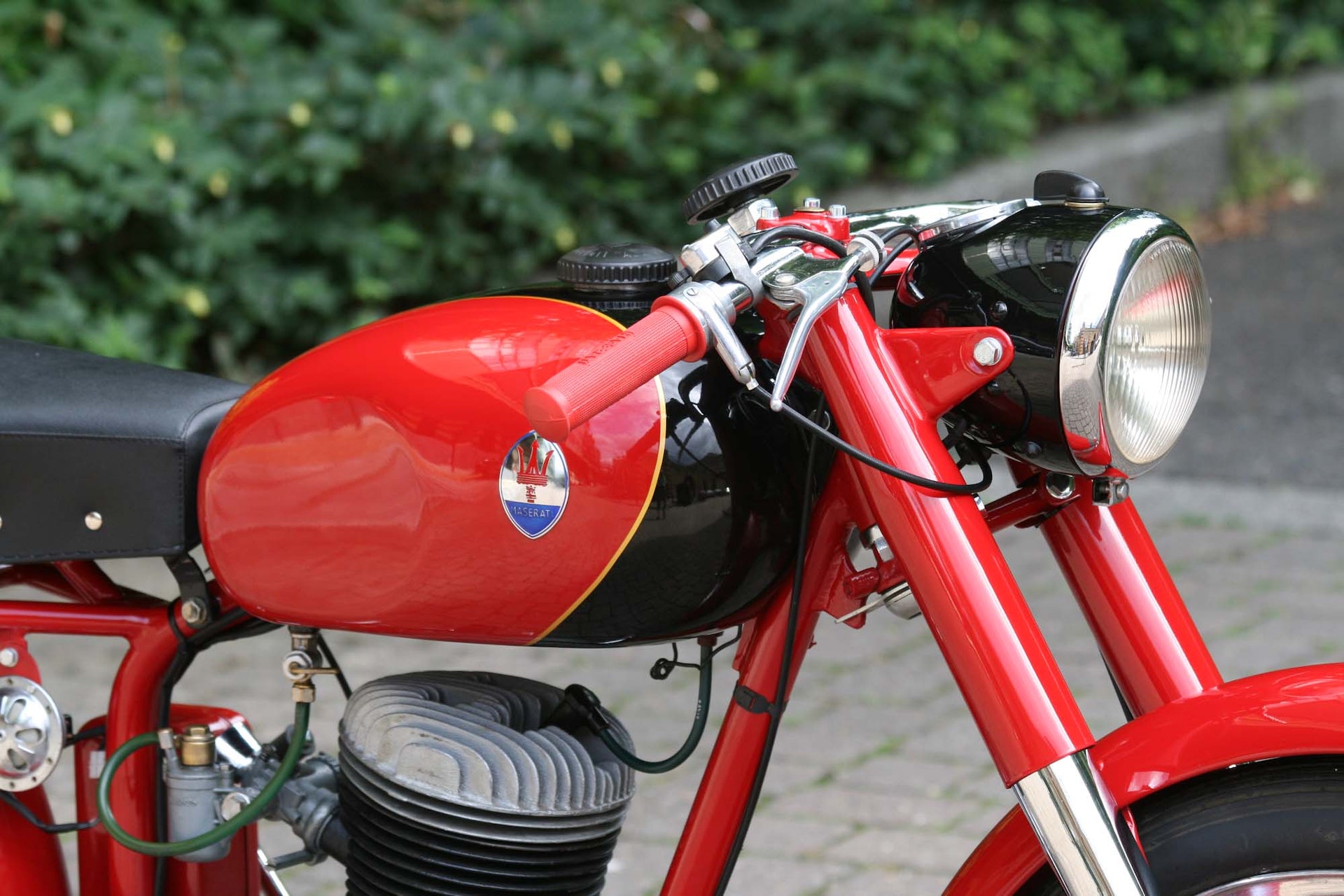 The first such motorcycle was the L125/T2, powered by a 4.8hp two-stroke engine. The Turismo Veloce that followed had a higher state of tune to produce 6hp, and was coupled to a four-speed gear set. It was officially named on the cover of the user manual as the Motociclo T.V.125/T2.

Differences over the Turismo Lusso that are visible at a glance include a larger-diameter front brake, a more steeply-angled inlet manifold and carburettor, and a spark plug that is located at the front of the cylinder head rather than at the back. 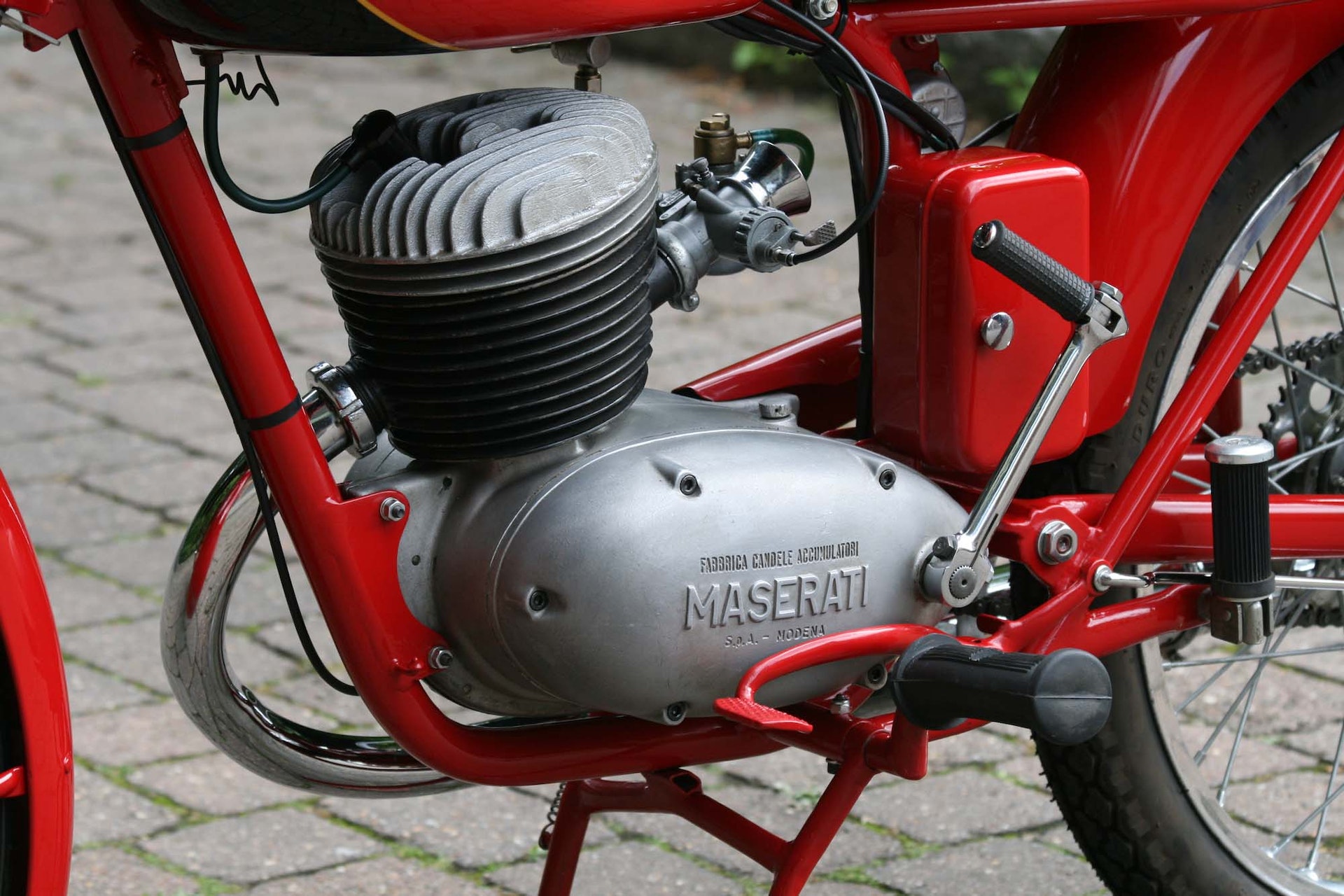 Maserati only manufactured motorcycles for seven years - 1953 to 1960 - and as they sold in very small numbers compared to their competitors of the time, most models are now very rare. The standard T2 and Turismo Lusso variants of the 125 are the most common, but genuine Turismo Veloce models in top condition are extremely hard to come by. 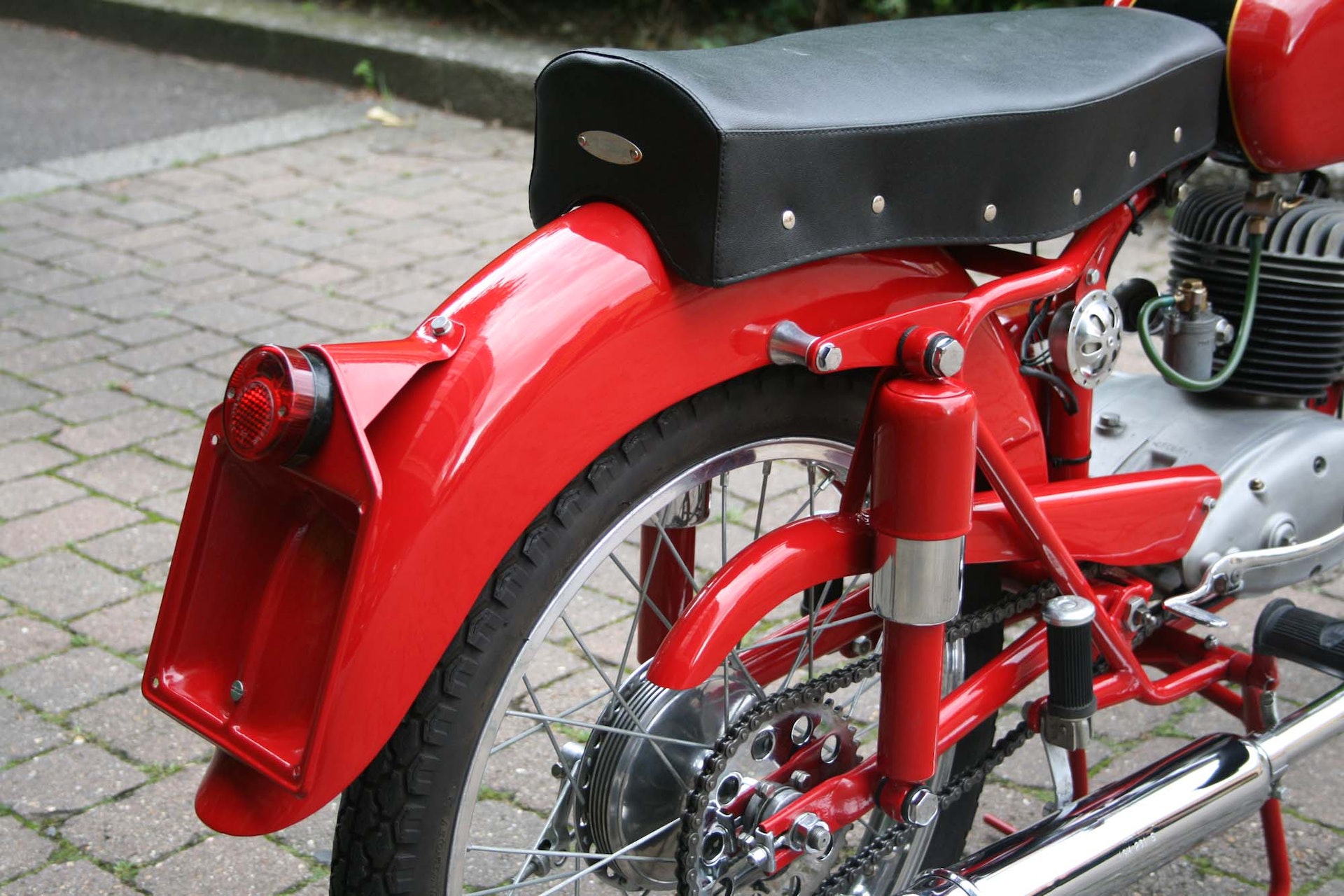 This particular Maserati 125 was acquired by the vendor from a classic motorcycle specialist in Rome, and was subsequently exported to the UK. It is currently NOVA registered and cleared with HMRC, but has not yet been registered. 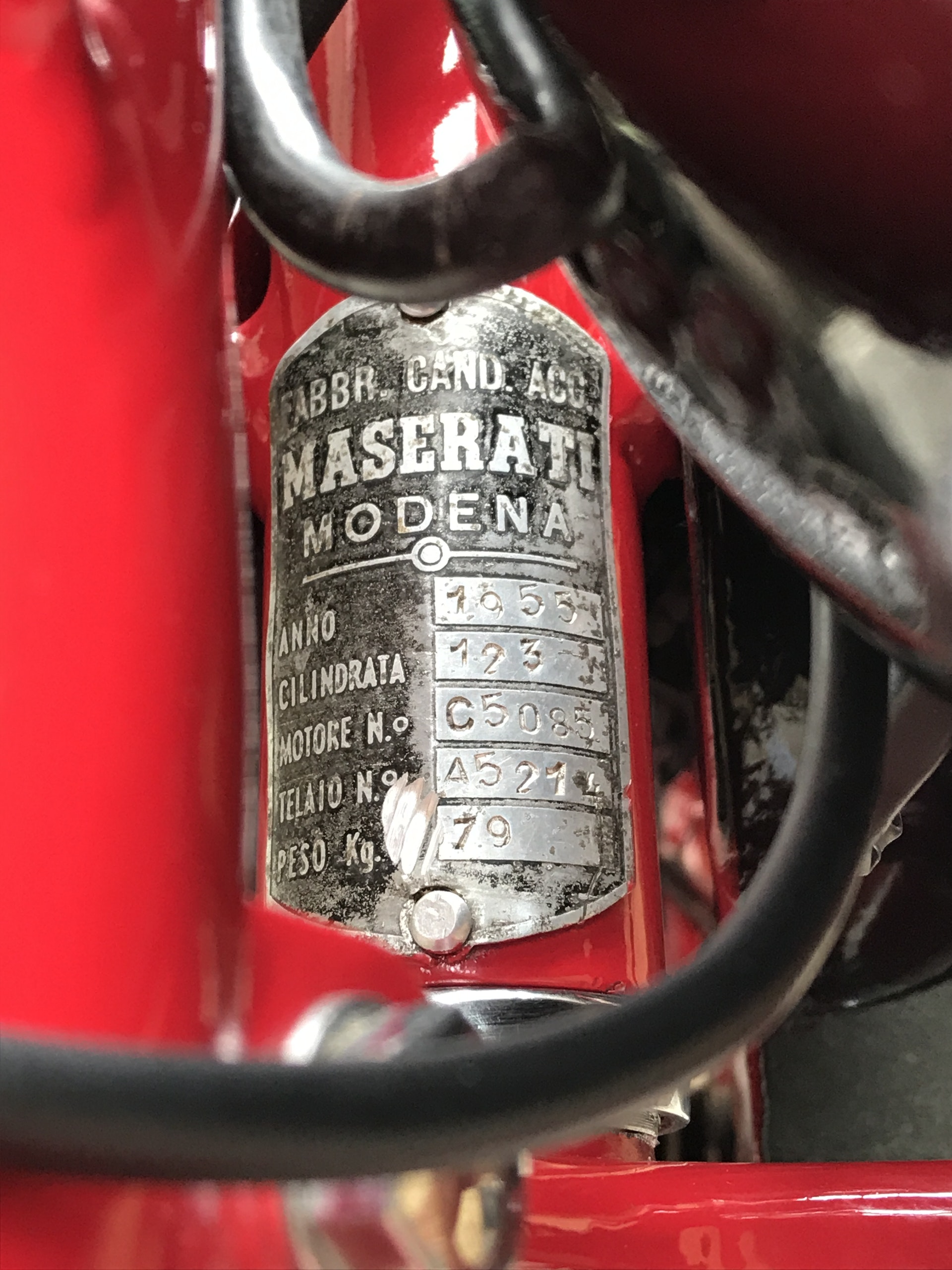 Thought to have been in storage in Italy for many years, a total restoration of this motorcycle was completed around three years ago. With the exception of a couple very minor chips in the paint from storage movements, this Maserati is in outstanding cosmetic condition. The bright red paintwork has a deep and glossy lustre, complemented by the contrasting black band and gold pinstriping around the petrol tank. 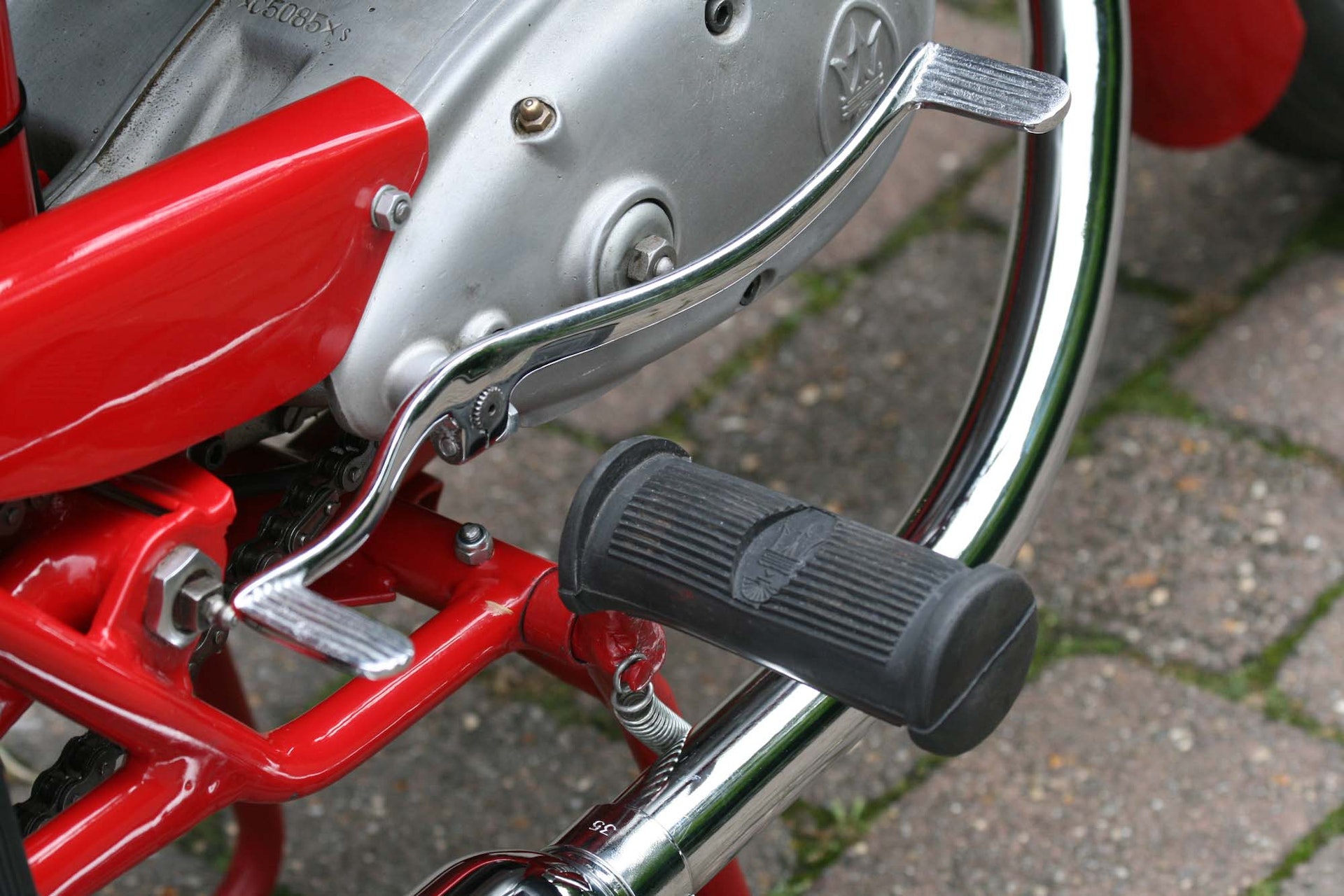 The exhaust is in superb order, as is all of the rest of the brightwork, bolts and the engine casing. Pedal and handle rubbers are immaculate as you would expect, and the saddle has evidently been retrimmed. 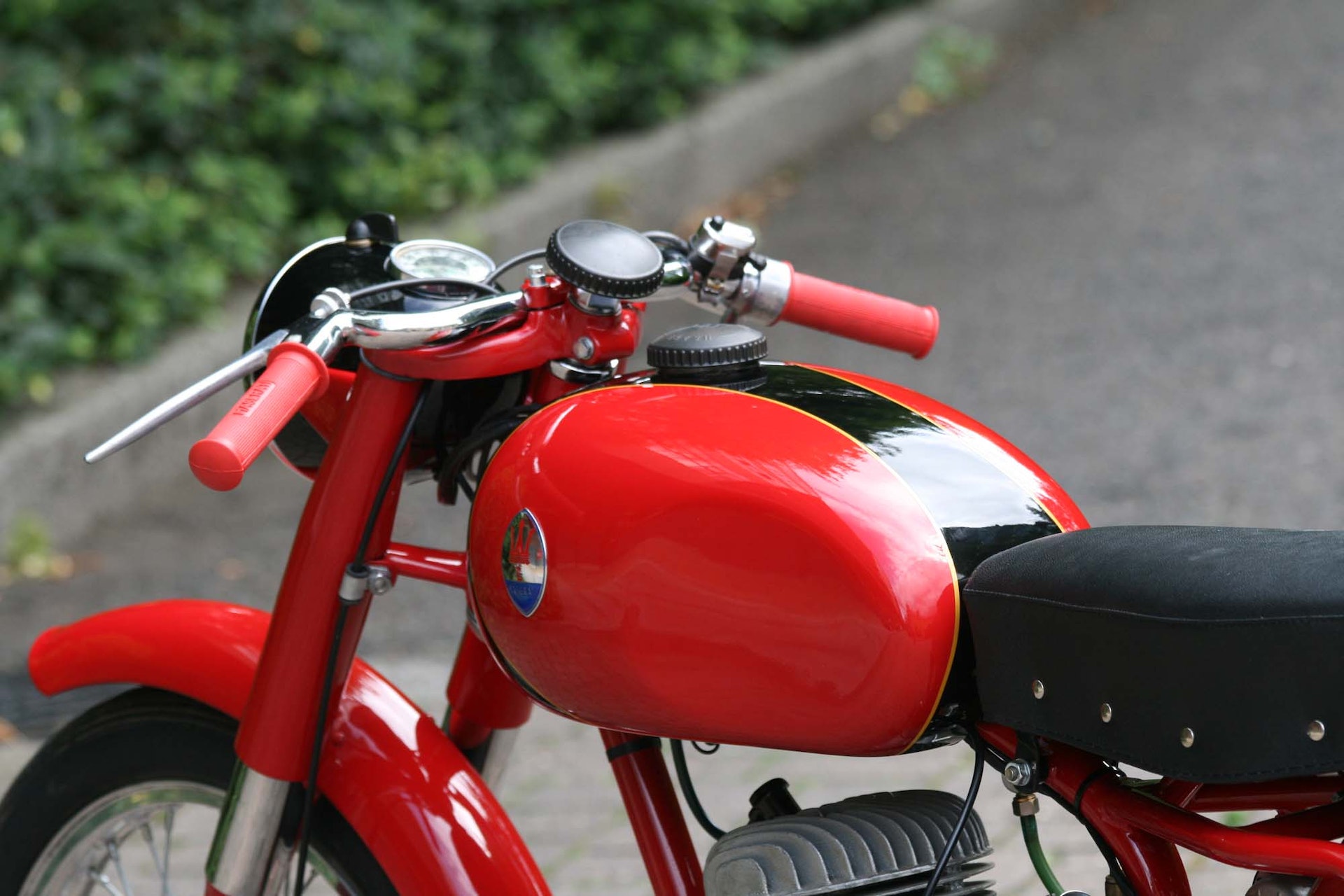 Its 123cc two-stroke engine is the original factory-fitted unit, as confirmed by the casting stamp. It starts and runs, but would benefit from a carburettor flush to cure a misfire if the next owner wishes to use the motorcycle on the road. 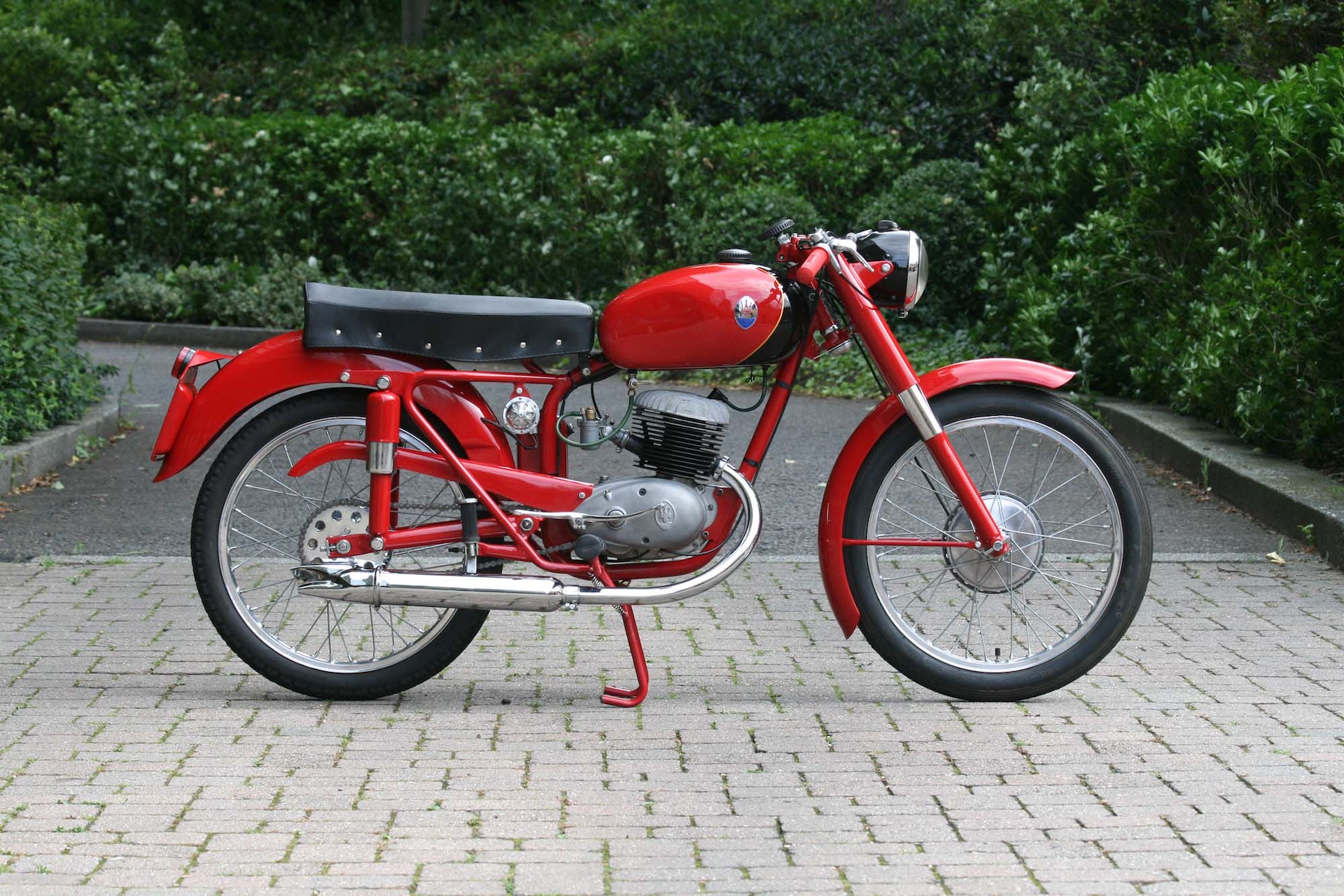 On the original Turismo Veloce bikes, the four gears were squeezed into the same casings as the three-speed set, and their narrowness meant they were notoriously fragile as a result. This particular motorcycle is understood to have had damaged gears replaced with a three-speed set from a Turismo Lusso during the restoration - a common modification that is accepted by marque experts. They are stronger and more reliable items, and the gears now select as they should. 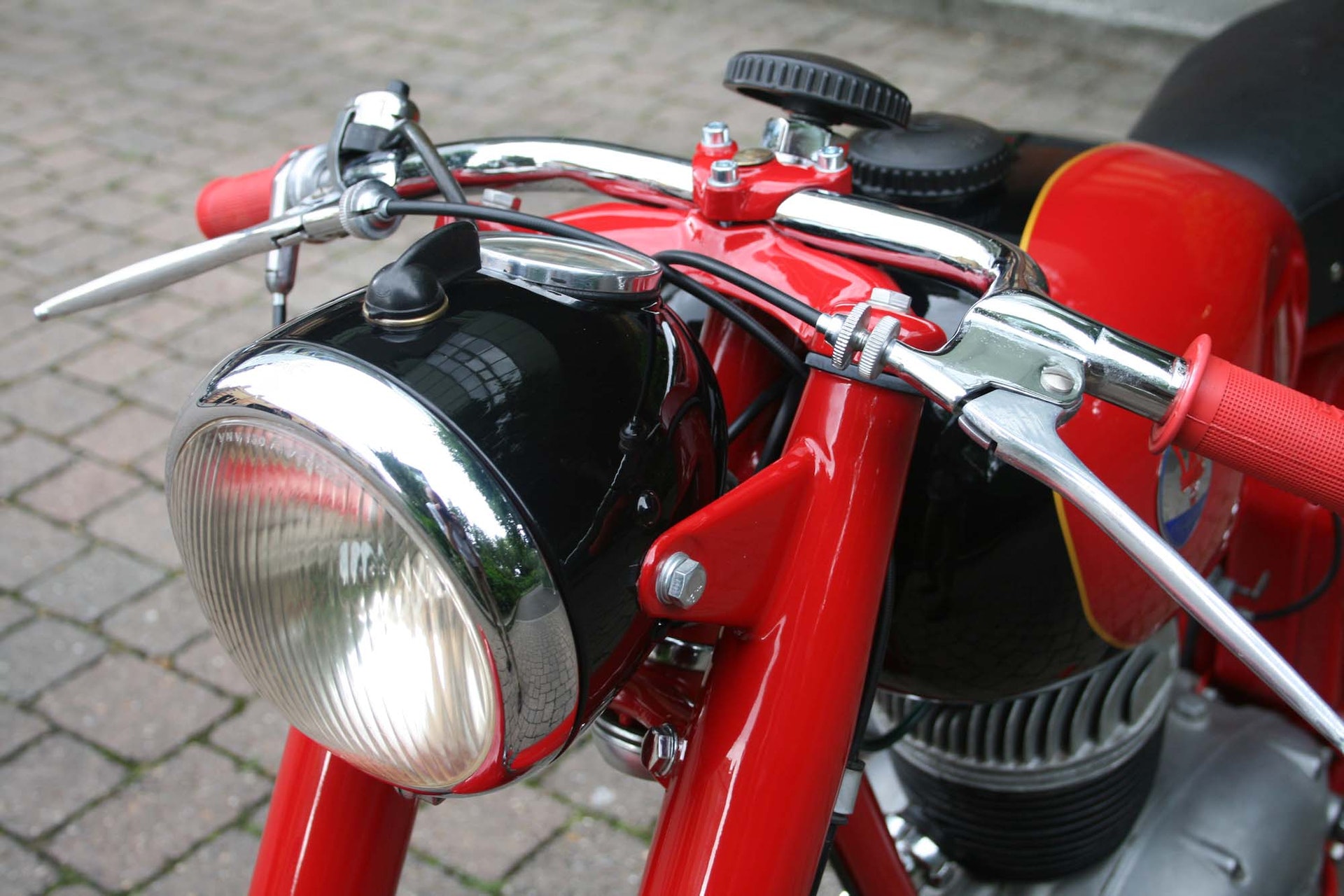 This Maserati 125 T2 Turismo Veloce is a beautiful post-war motorcycle in terrific, fully-restored condition. As an exceptional rare model from an intriguing period in the marque's history, it would look fabulous simply as a showpiece alongside a classic or modern Maserati car. However, it would be a shame to miss out on its exciting riding performance, which is only a light fettle away for the next owner.