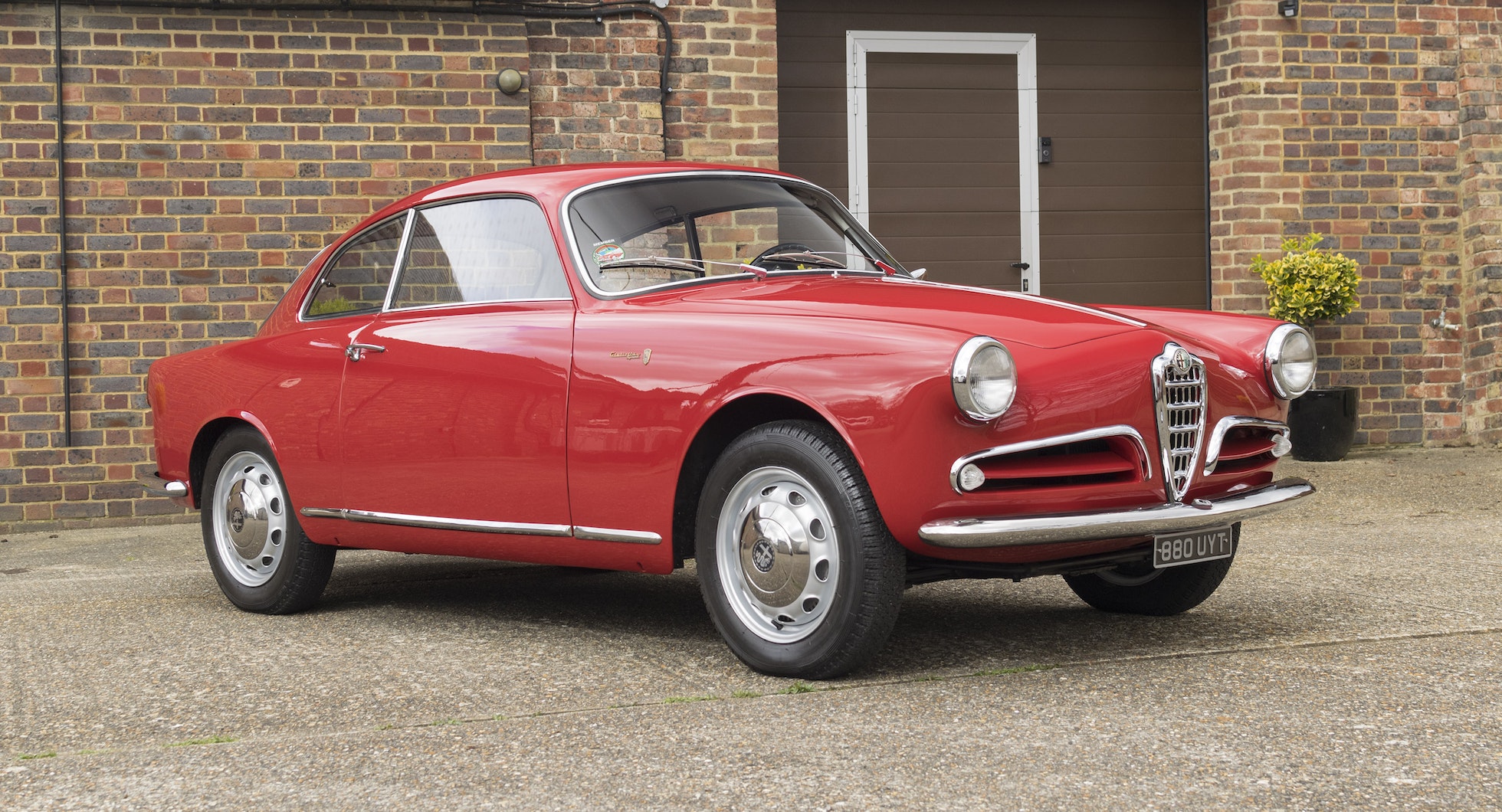 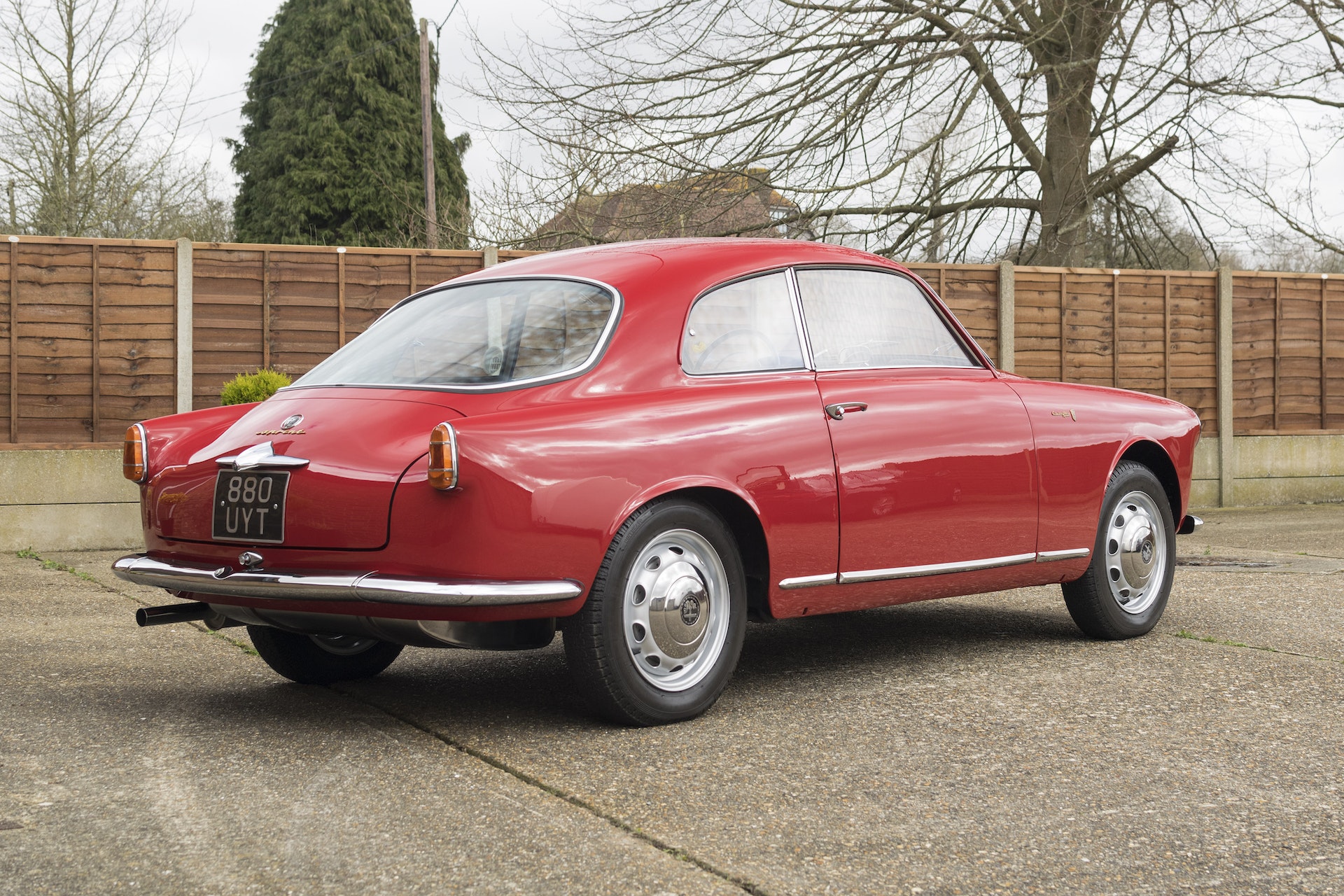 According to Alfa Romeo Automobilisimo Storico, Giulietta Sprint chassis number 00881 was completed on the 24 September 1955, and was sold to its first owner on 4 October 1955 in Florence. Copies of the original ownership records on file show that it remained in Tuscany throughout its life in Italy. The car was displayed at the 50th anniversary of the Giulietta Sprint in 2004, in Piazza Duomo in Milan. 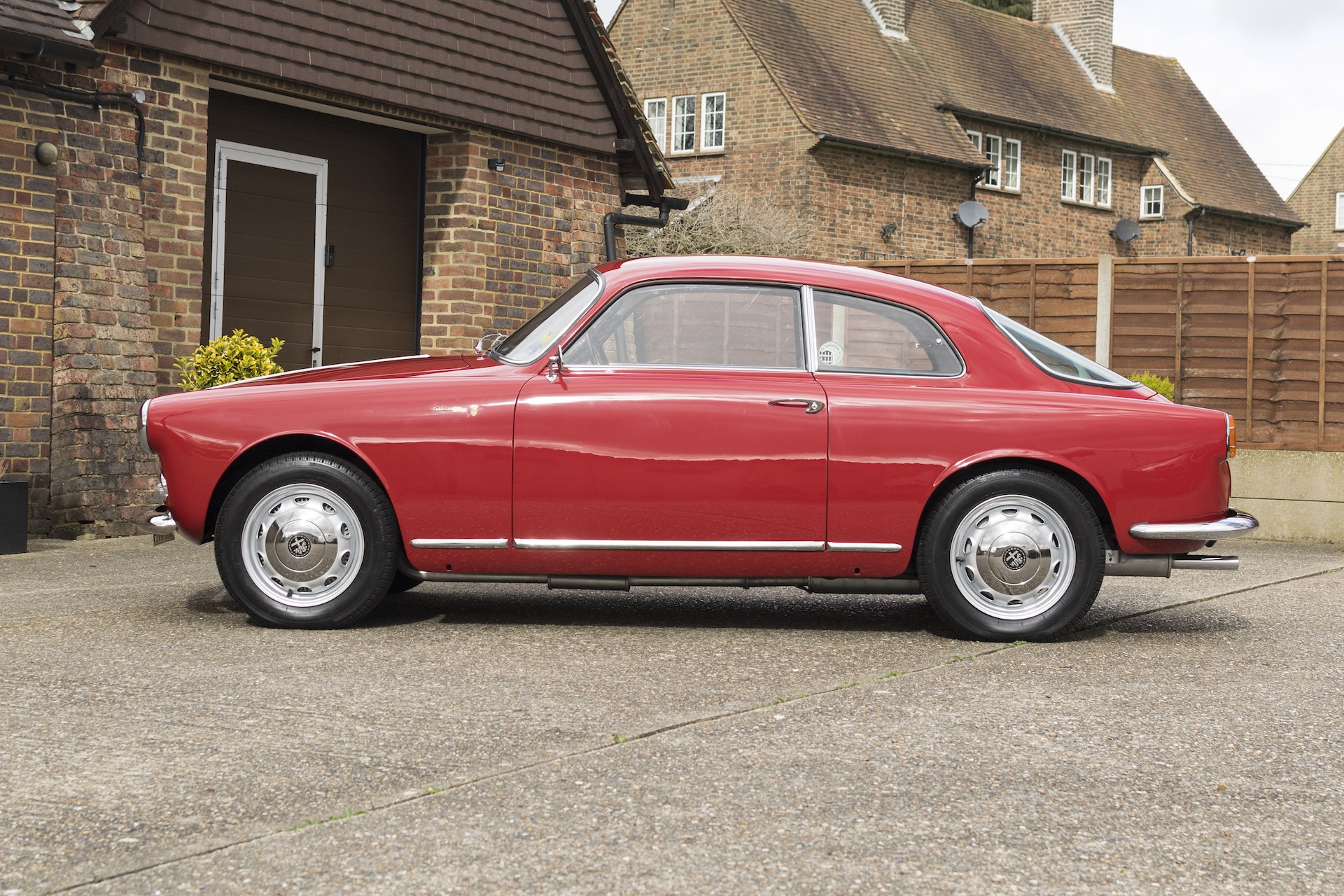 It was at this gathering in Milan that the Alfa Romeo was spotted by a lawyer from Greece, who remained in contact with the Italian owner for the next six months, finally persuading him to sell the car. It then left Italy for the first time in its life, moving to a new home in Athens. There, it was gradually refurbished, with a full Alfa Rosso repaint, a meticulous re-trim using all the correct Series 1 materials, and a full rebuild of the twin-cam engine. 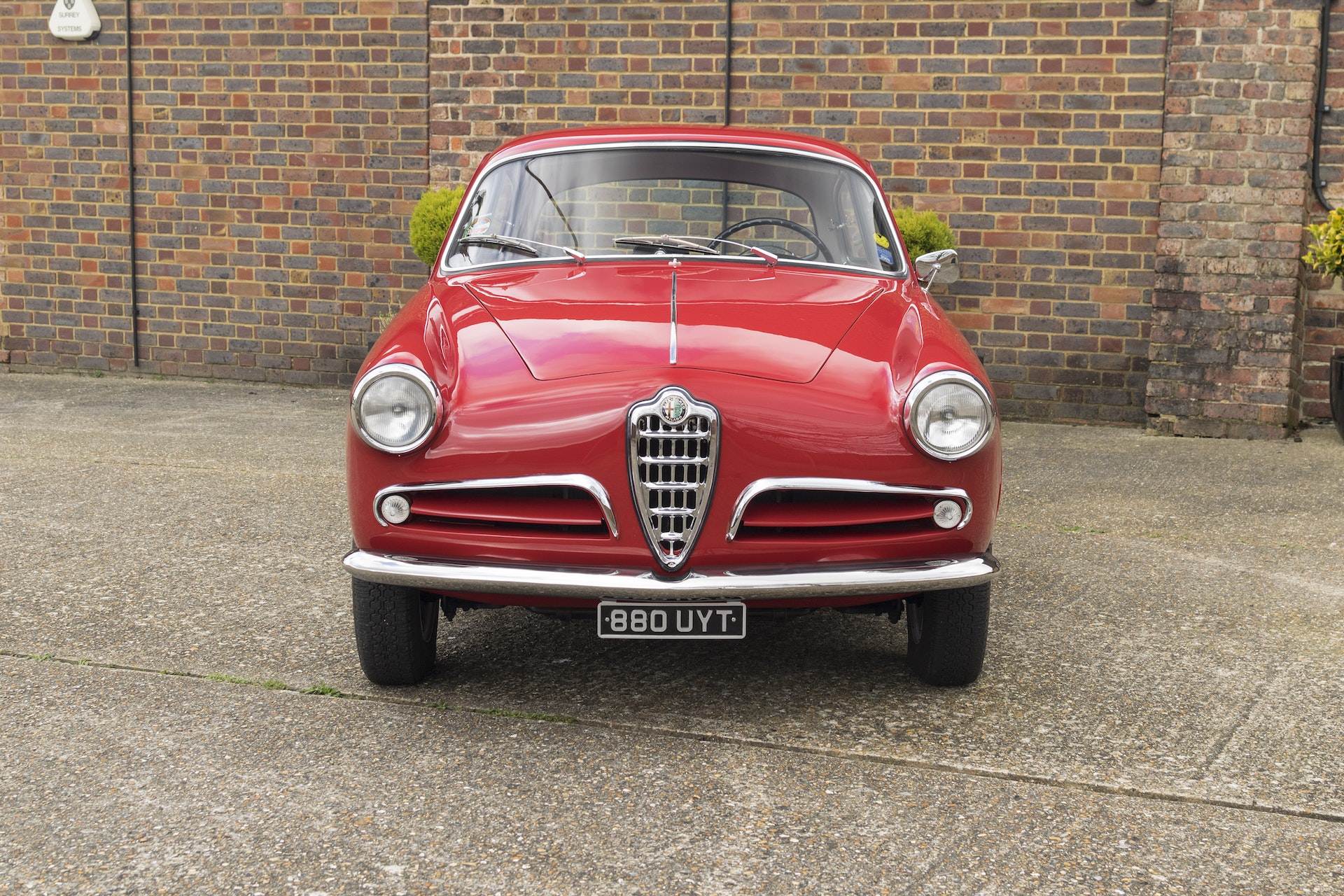 Having owned and enjoyed the car for just over 10 years, the Greek gentleman sold the car to the current owner, and it was exported to the UK in 2016. Over the last few years, the seller has commissioned further mechanical work to ensure the driving experience and reliability matches the cosmetic condition. The result of this is one of the finest examples of the breed. Being an early model, it is also eligible for the Mille Miglia, and many other historic events around the world. 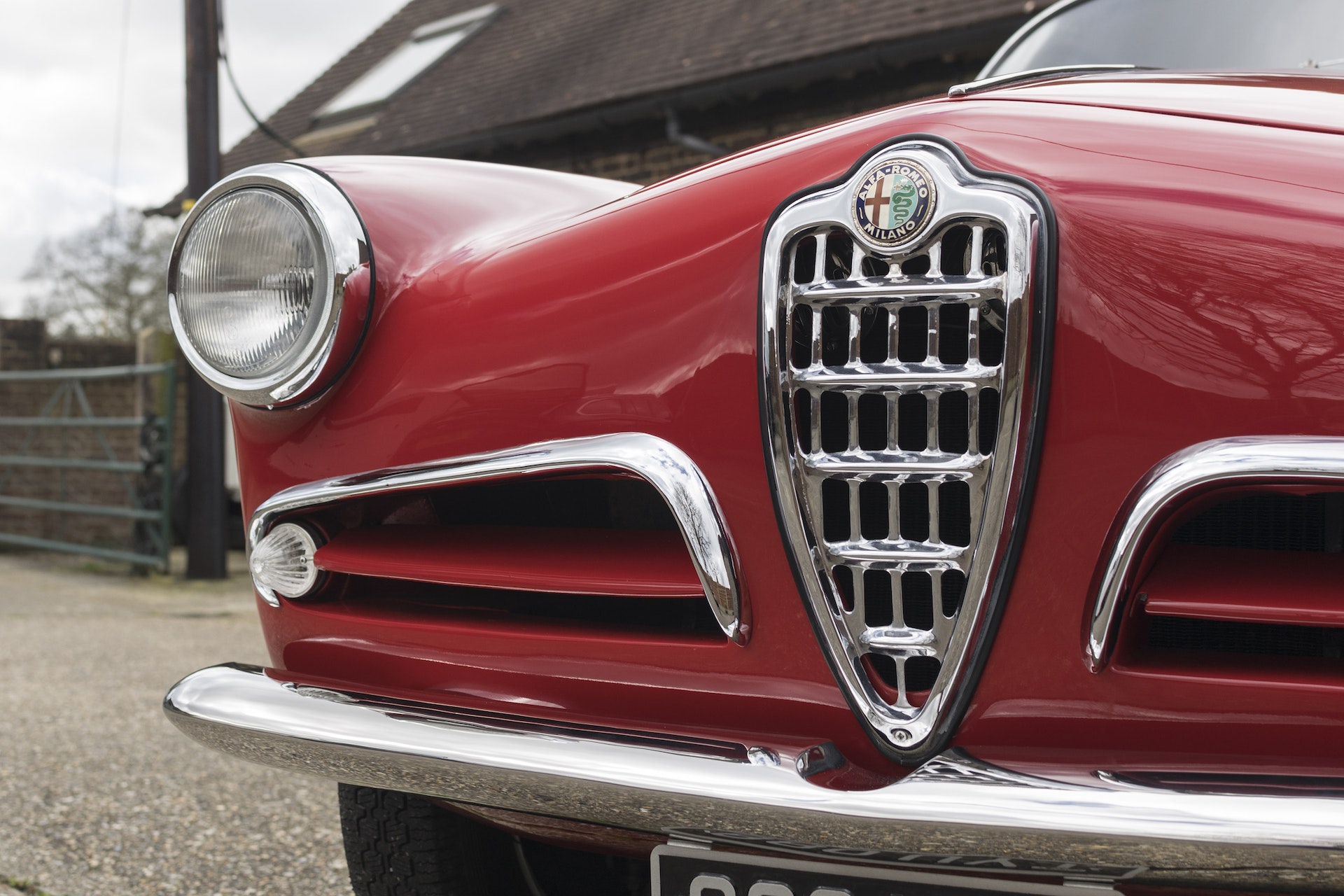 Today, its Franco Scaglione-designed coachwork presents in superb condition. Early cars are sought after by collectors on account of their hand-beaten panels, with slimmer formed metal around the sills and wheel arches. This example has evidently never needed extensive body restoration, and it appears to retain its original floors and structure underneath, as shown by the detailed photos in the gallery below. 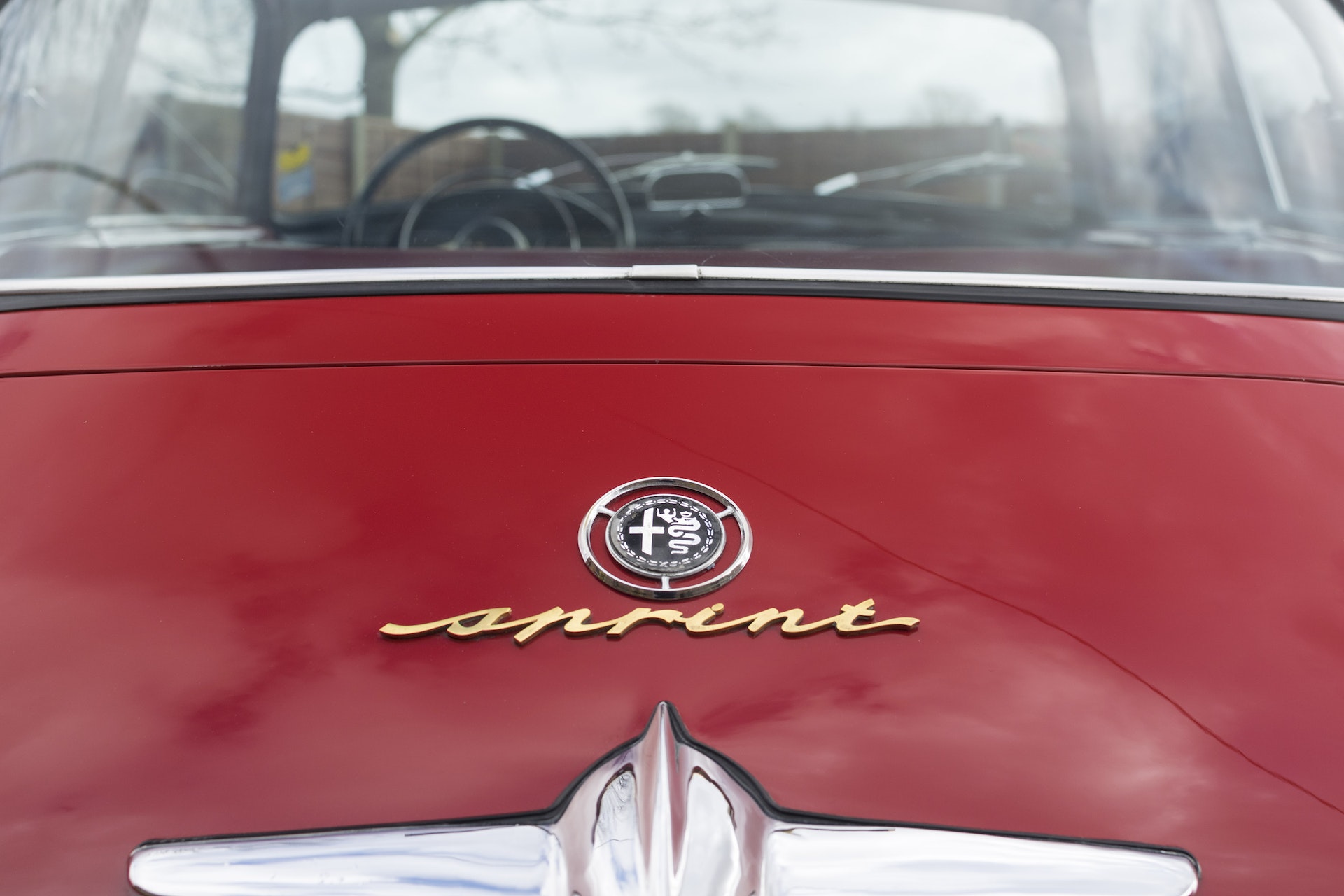 Other desirable features of the early Giulietta Sprint include the chromed ‘moustache’ front grilles and smaller six-inch headlights. This car’s ‘Alfa Rosso’ paintwork is in magnificent order, with only a few very minor imperfections around the door and boot shuts, which are clearly shown in the gallery below. The brightwork is in great shape throughout, and the window seals are all sound. New stainless-steel front and rear bumpers have been fitted, along with new Carello headlight lenses and polished bezels. 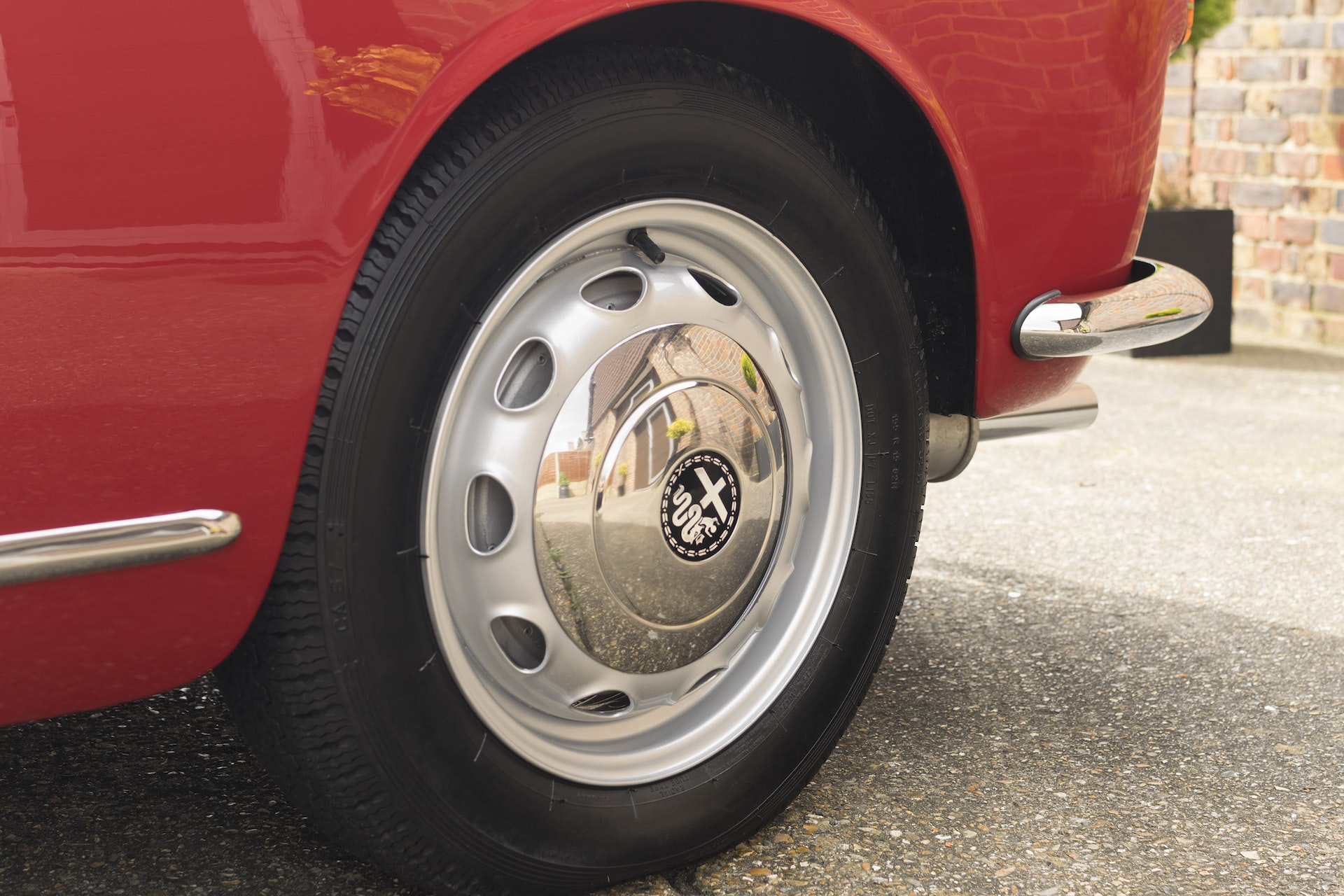 When the car arrived in the UK, the engine was removed to enable the engine bay to be repainted and detailed to match the body finish, and the whole car was treated to a comprehensive detailing session. The exterior badges are all present and correct, and it has a single chrome wing mirror mounted on the driver’s side. The car rides on a set of 15-inch wheels, correct for its chassis number, which are pristine and finished with highly polished centre caps. 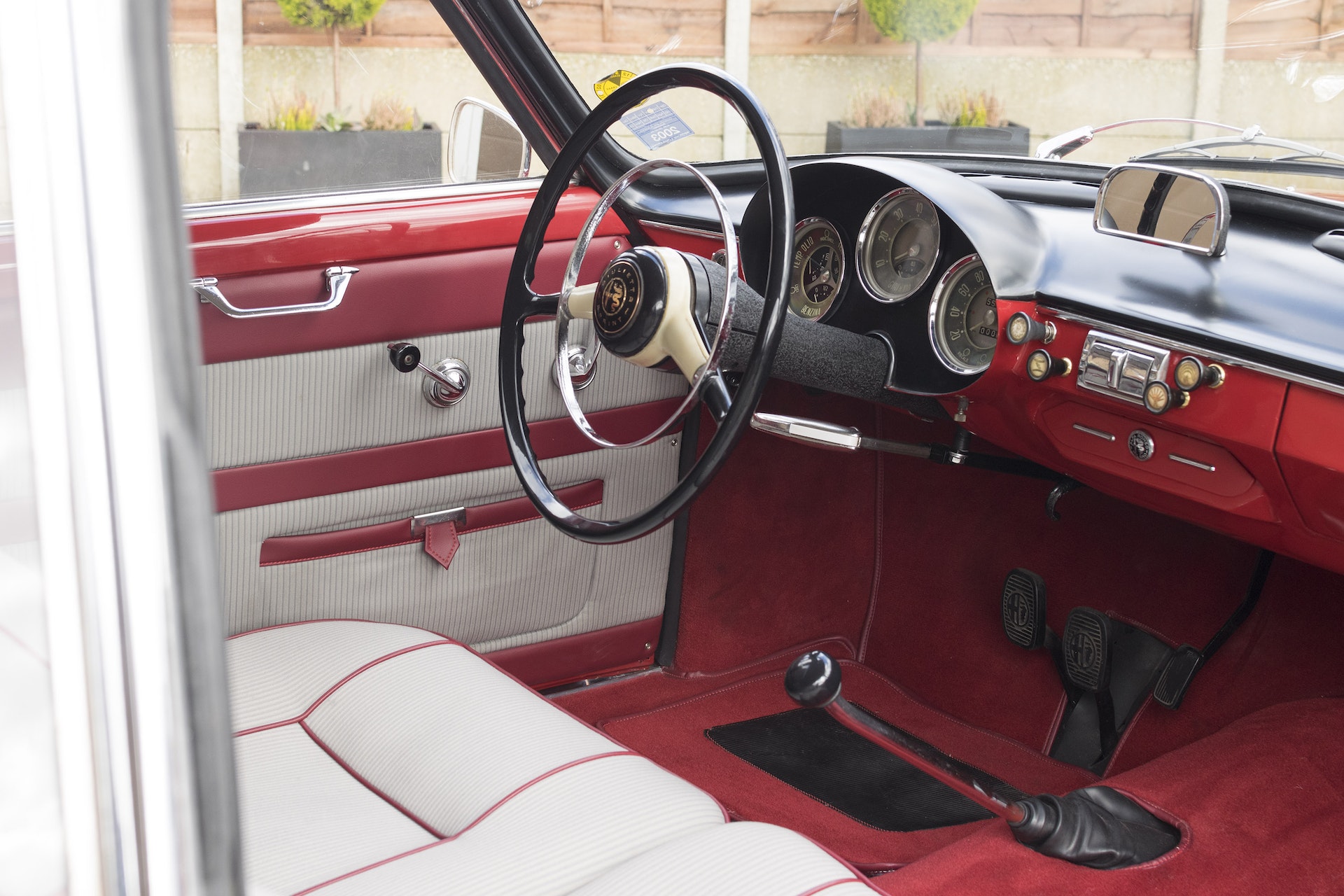 The cabin of this Giulietta Sprint is particularly smart, with a re-trim in 2015 that was completed to a very high standard. It features the correct ribbed grey cloth on the seats and door cards, with secondary trim in dark red vinyl. There is also red carpeting throughout, along with a set of matching floor mats. The switches and levers appear to be original, and it even retains the correct cable-pull starter mounted under the dashboard, which is an item only found on these early cars. Records suggest that this car would originally have had a column-mounted gear shift, but this example has been converted to the more user-friendly floor shift selector, while retaining the correct four-speed tunnel gearbox. 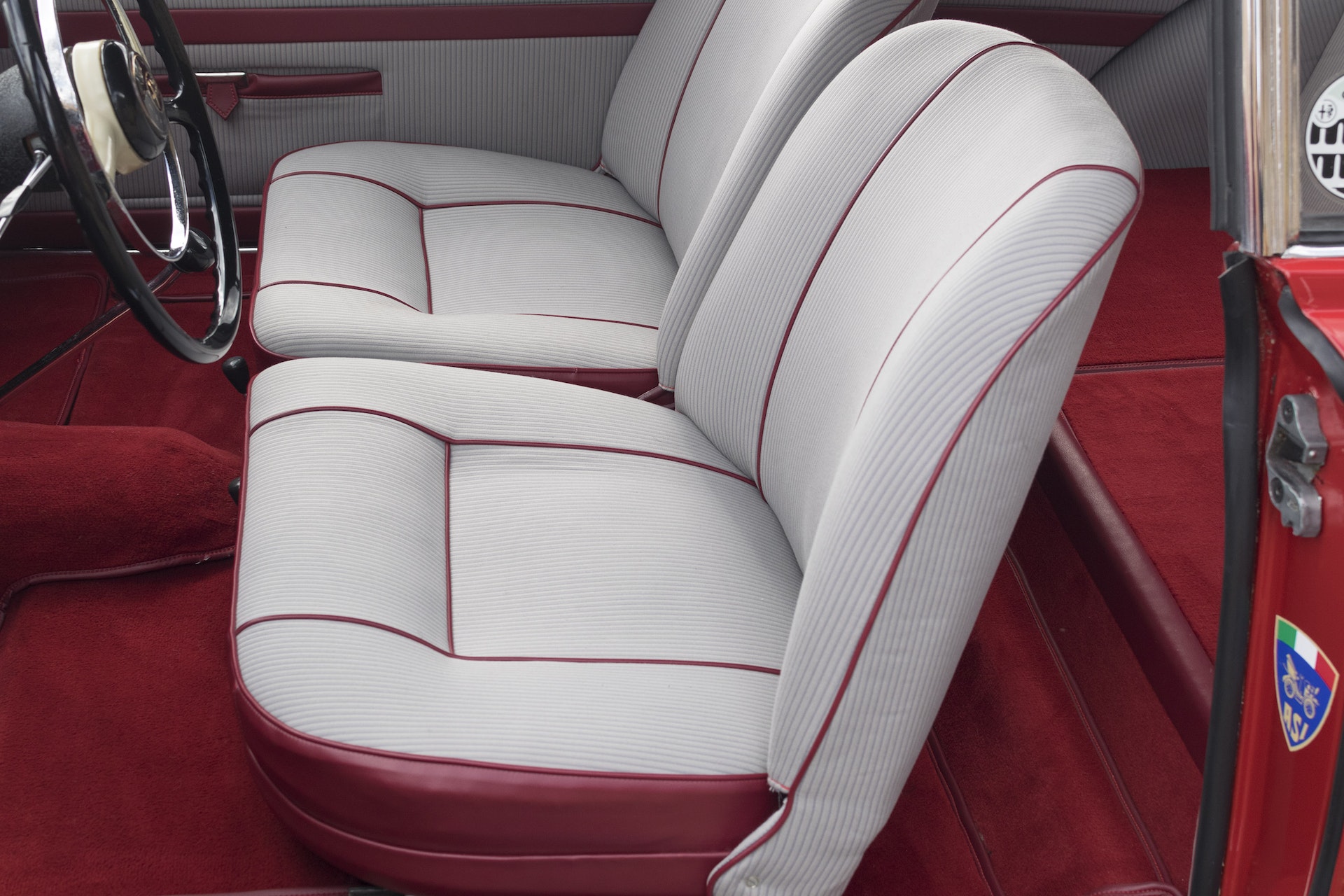 Ahead of the driver, the steering wheel is in great shape, with no cracks in the rim, and the three Veglia instrument dials each read clearly and work perfectly. The door jambs and sill covers are in superb condition, and the headlining is also in excellent order. At the back of the car, the boot structure and floor are sound, and are protected by a tailored rubber mat. The car even retains its original Alfa Romeo tool roll and jack. 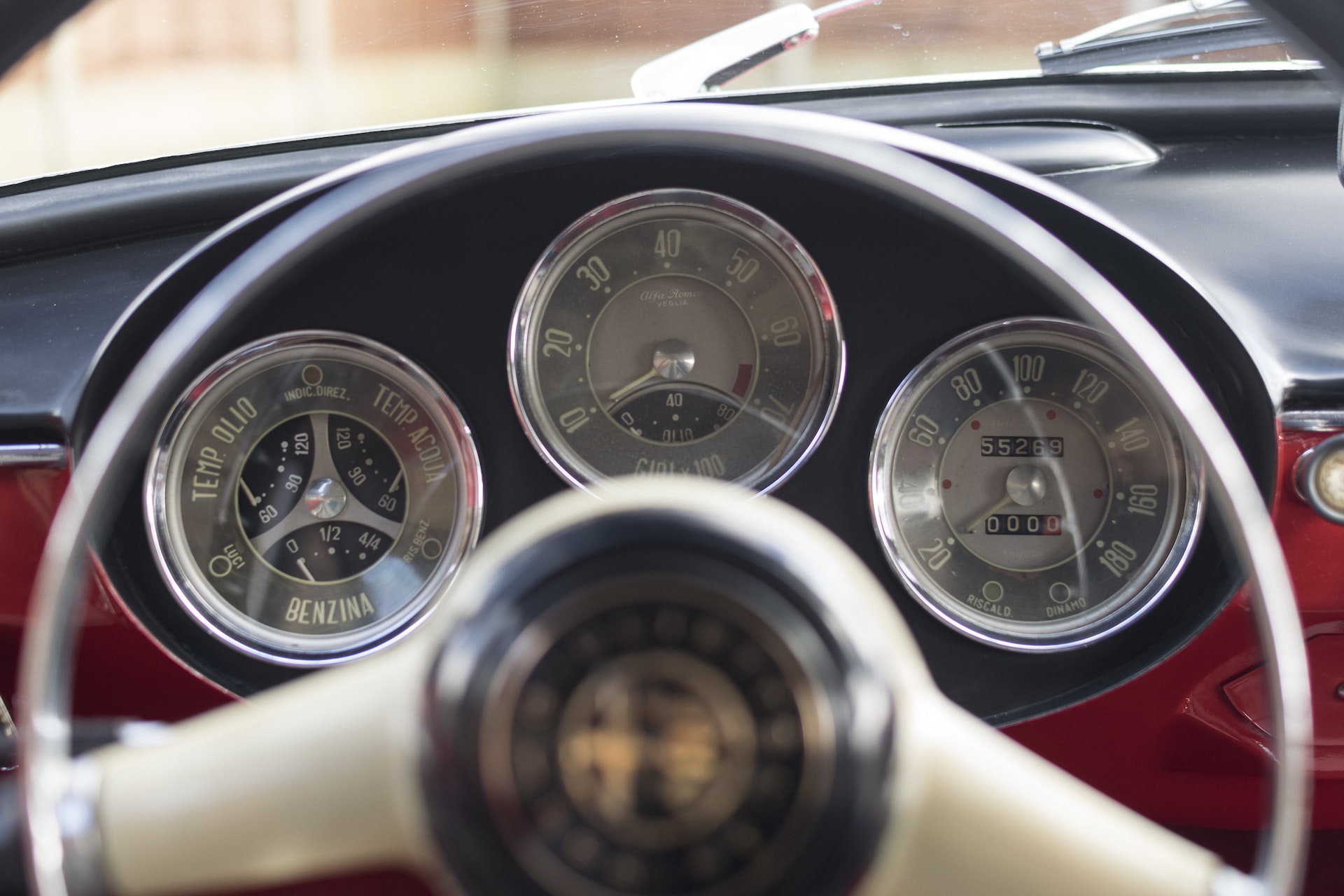 Opening the bonnet reveals an engine that starts, runs, and drives exceptionally well, and that also presents very smartly. The current owner has taken care to make sure the details are correct, including sourcing an original ‘coal scuttle’ FISPA air box. It also retains the mechanical fuel pump, and aluminium fan. The two wing nuts on top of the new air box have made holes in the bonnet insulation, but it is original and in perfectly usable condition, only meriting replacement on cosmetic grounds should the next owner wish. 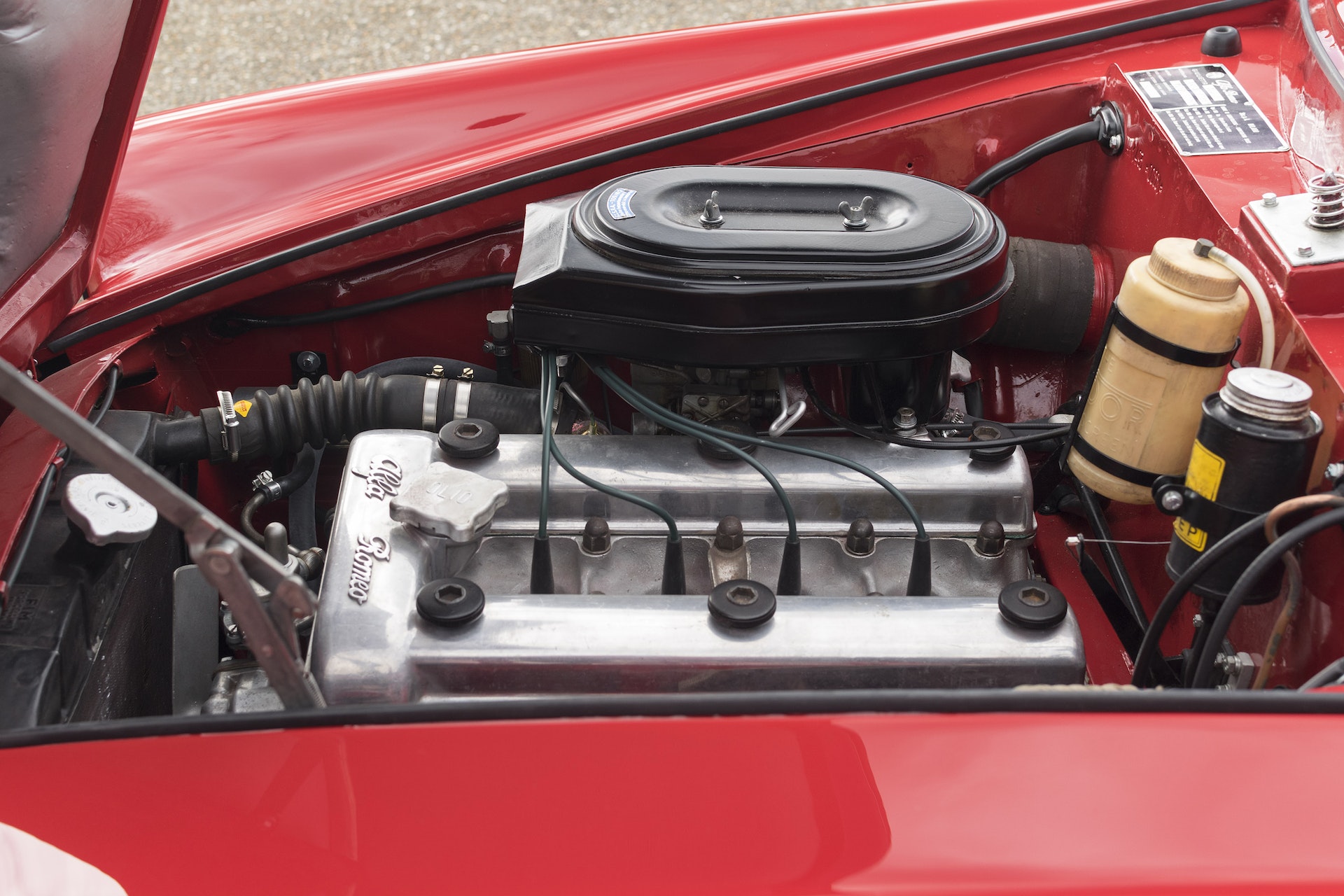 After arriving in the UK, this Giulietta Sprint was given a comprehensive mechanical inspection and overhaul. The work was carried out by recognised Alfa Romeo specialist DTR Sports Cars, who were instructed to ensure the car operated reliably and without fault. In search of this aim the car was completely rewired using a new custom-made wiring harness, along with an overhaul of the mechanical fuel pump, the water pump, new oil temperature, water temperature and fuel senders, and refurbishment and calibration of the instrument gauges. 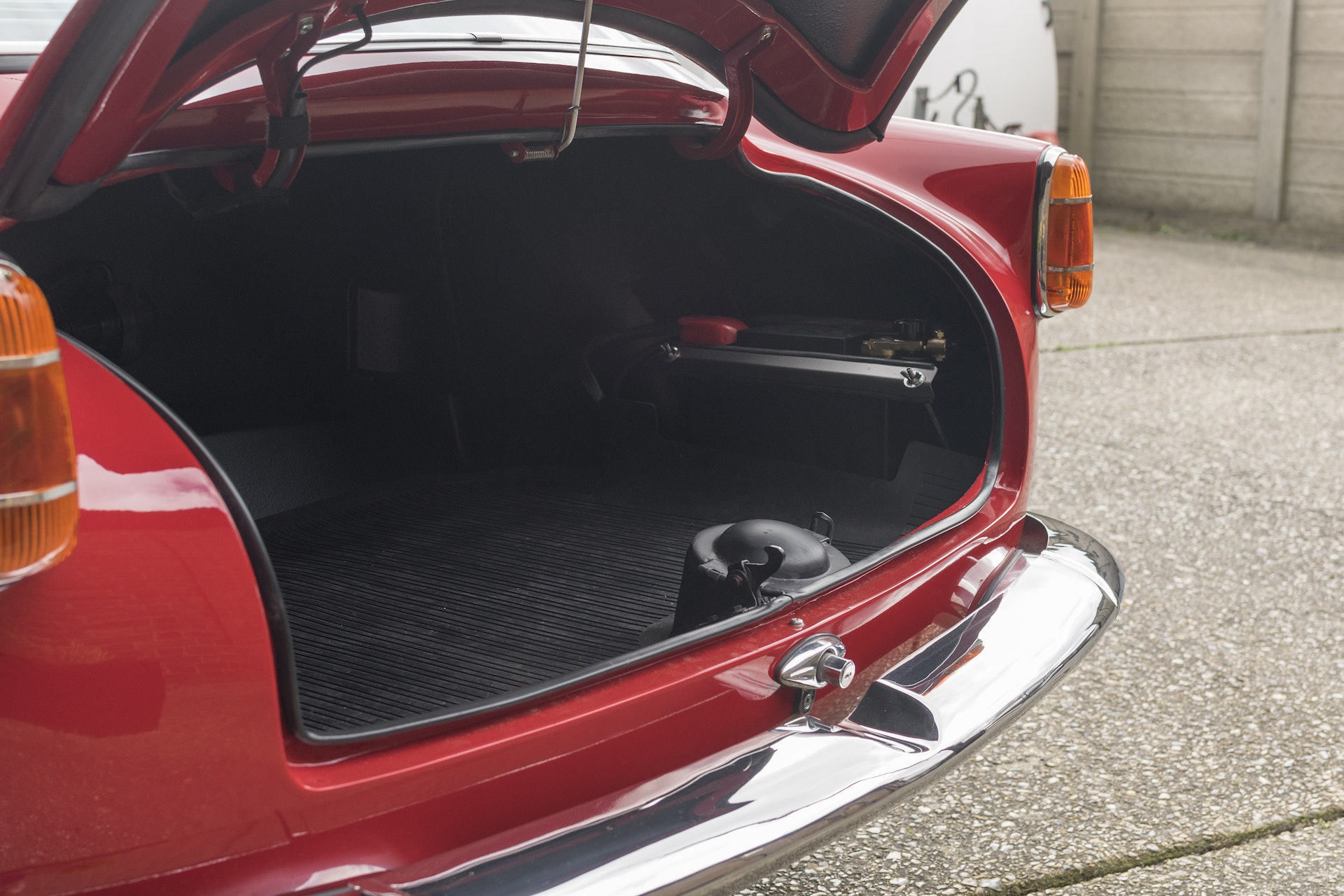 In addition to this, the suspension and brakes were completely overhauled, including new bushes and brake hoses, along with replacement wheel cylinders, front drums and bearings, and with all the brake shoes relined. A new prop shaft was custom-made, balanced and fitted. A fresh set of ignition leads and a Dynalite alternator were installed, and the car also benefits from a completely new exhaust system. Invoices for parts and labour since arriving in the UK are on file, and approach £25,000 in value. 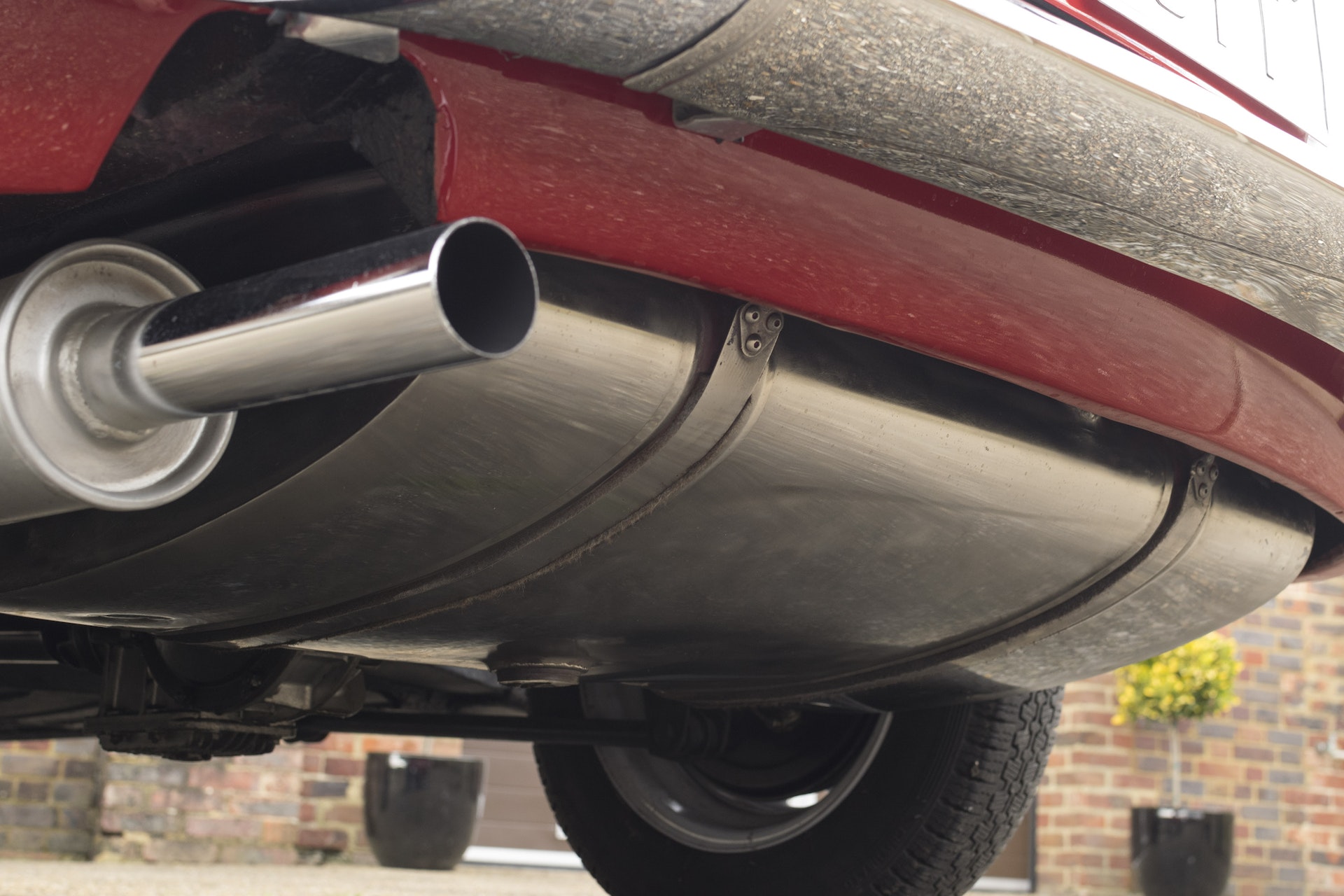 The seller has handled numerous examples of the Giulietta Sprint and Sprint Veloce over the last six years, and reports that this is now one of the best driving cars they have had the pleasure of owning. They note that it drives without issue, is smooth and comfortable, and pulls strongly on the road. 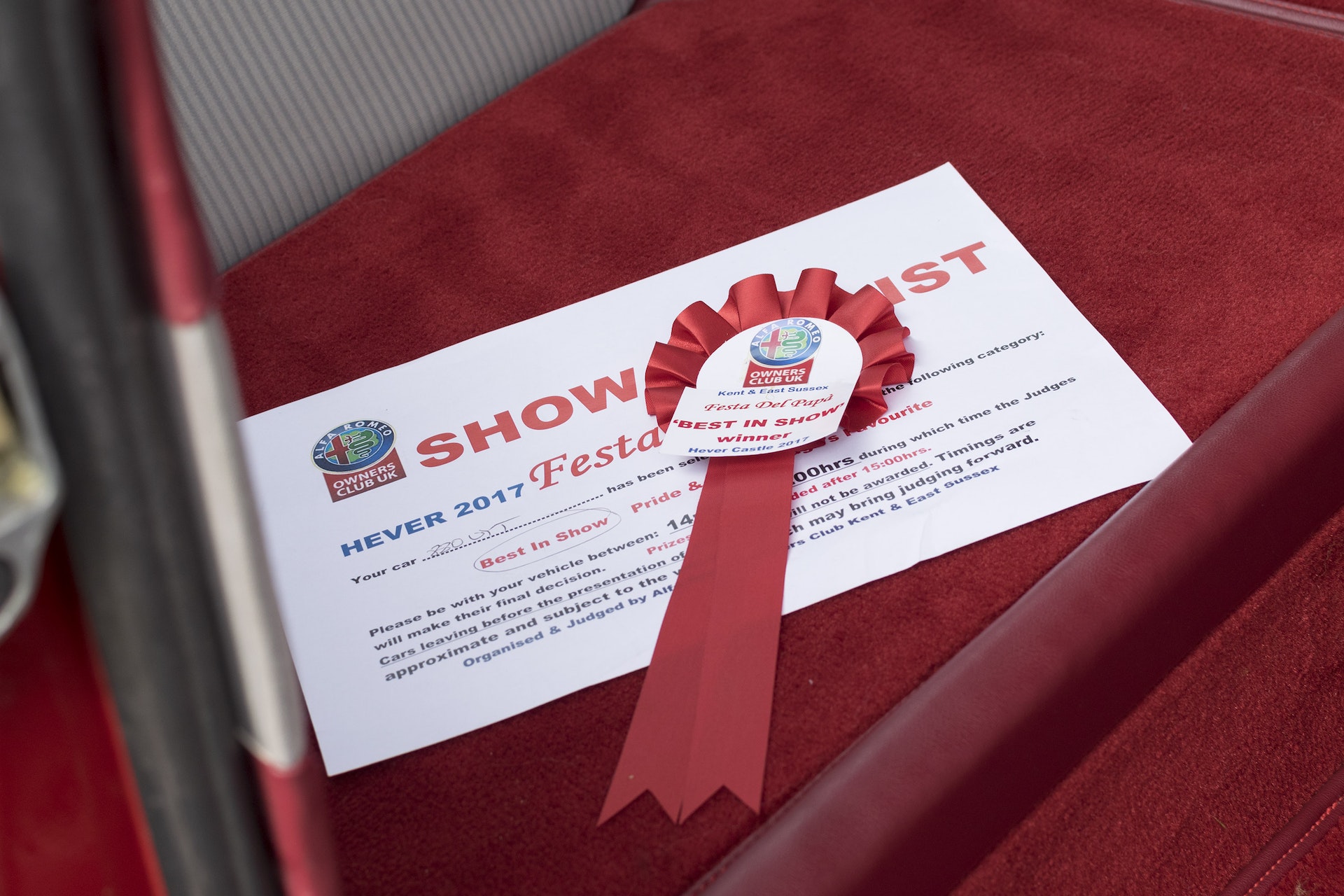 The wheels are fitted with a set of Pirelli Cinturato CA67 tyres to the original specifications, in size 155 R15 82H all round. They are date-coded to 2012 and remain in superb condition. The car is approved by the Automotoclub Storico Italiano (ASI), and also has a current FIVA Identity Card ‘passport’ to unlock access to a range of historic events. 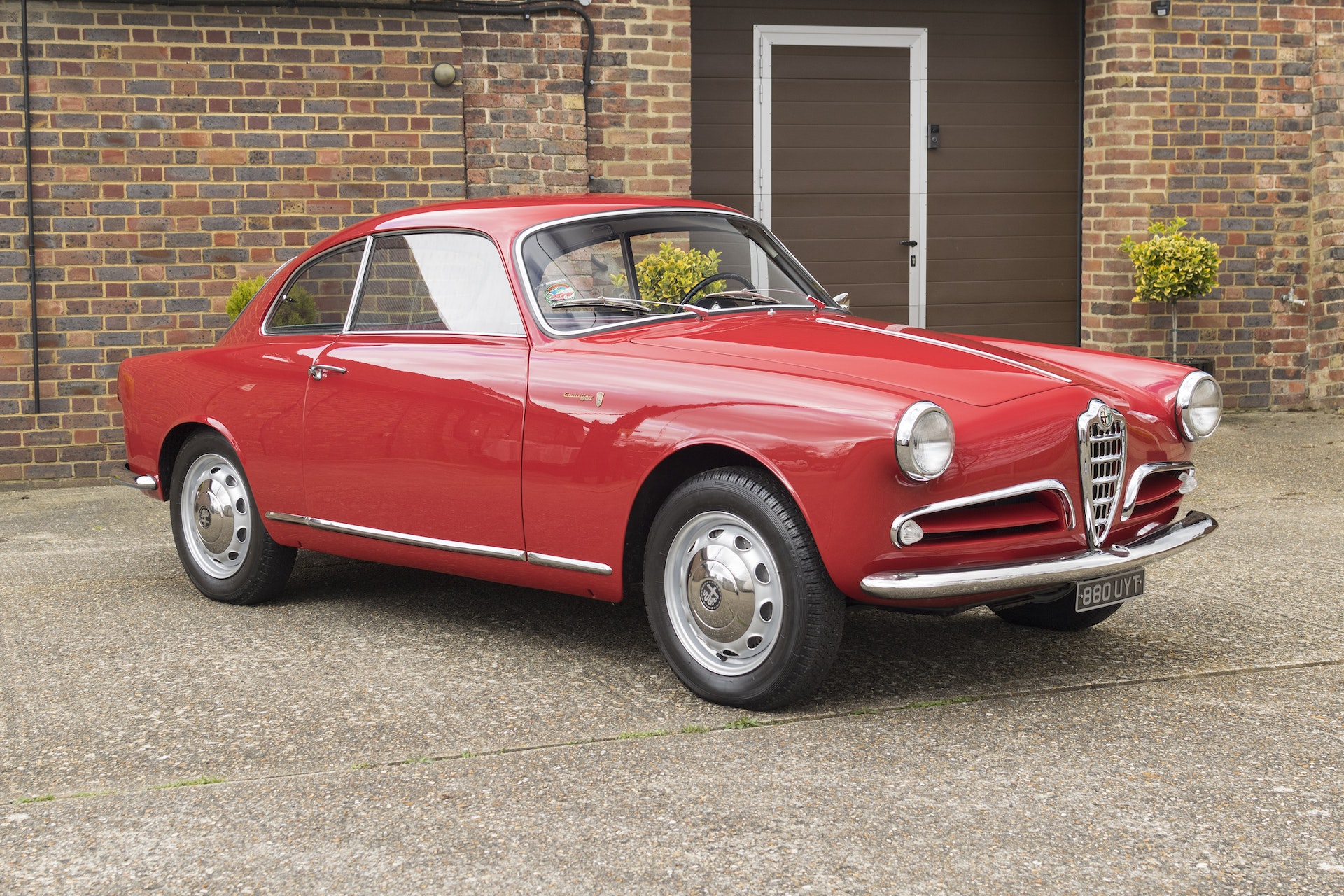 This Alfa Romeo Giulietta Sprint is a beautifully presented Italian classic, which oozes style and has the unmistakable character of ‘la dolce vita’. With traceable ownership history right back to 1955, and boasting superb mechanical and cosmetic condition throughout, this is a charming car that would make a wonderful addition to any collection.

Please note: In light of current restrictions on movement, the seller is happy to provide the buyer with three months of heated indoor car storage for the car if needed, where it will be left on a trickle charger and safely protected by a car cover.